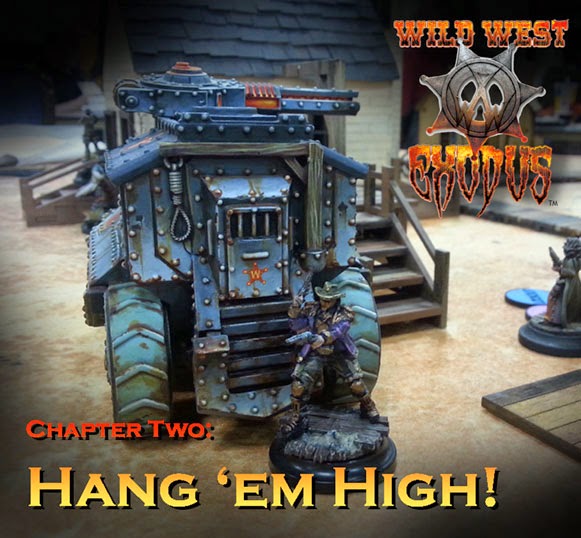 When we last saw the intrepid Lawmen of Wappelville, they were attempting to thwart yet another heist by the Outlaws.  Those filthy bandits were lead by Billy the Kid, who was seeking to redeem himself from the great Drapery Disaster.

It would be Warren Earp who would oppose him.  Warren was growing more convinced that his presence there was far from a coincidence.  The stranger in the odd cloak continued to point in the direction of the church.

He could see the telltale dust clouds of Iron Horses and a Streets and Sanitation IronHide from behind the church, so he fired a round of smoke to obscure his own advance.  A few hired hands moved towards the church with him. 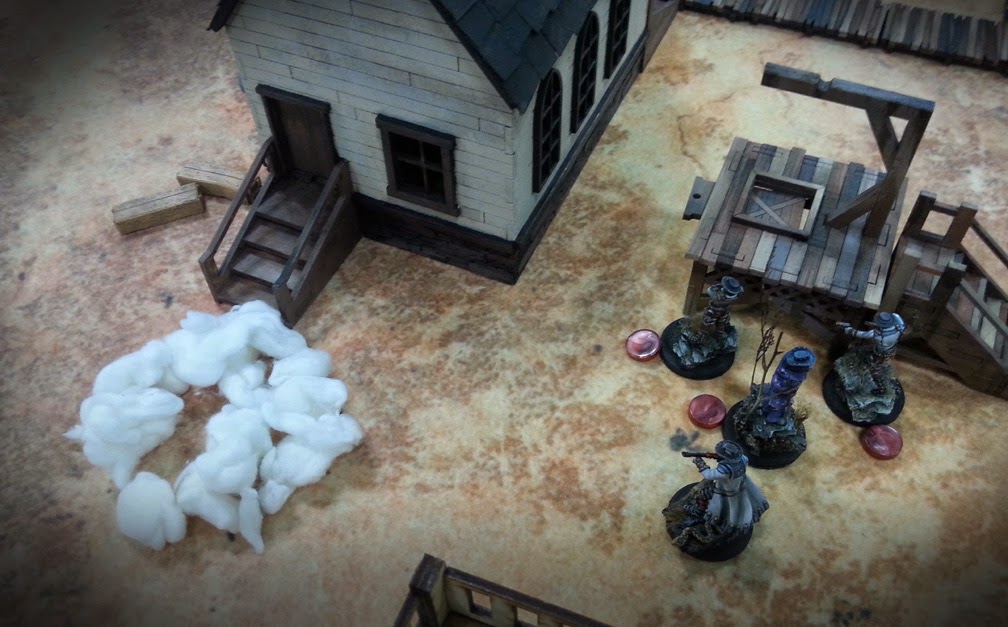 The rail gun of the mighty Judgement vehicle was trained on a wide open shot against the trailing Iron Horse, but the rider proved too skillful, and the shot was dodged! 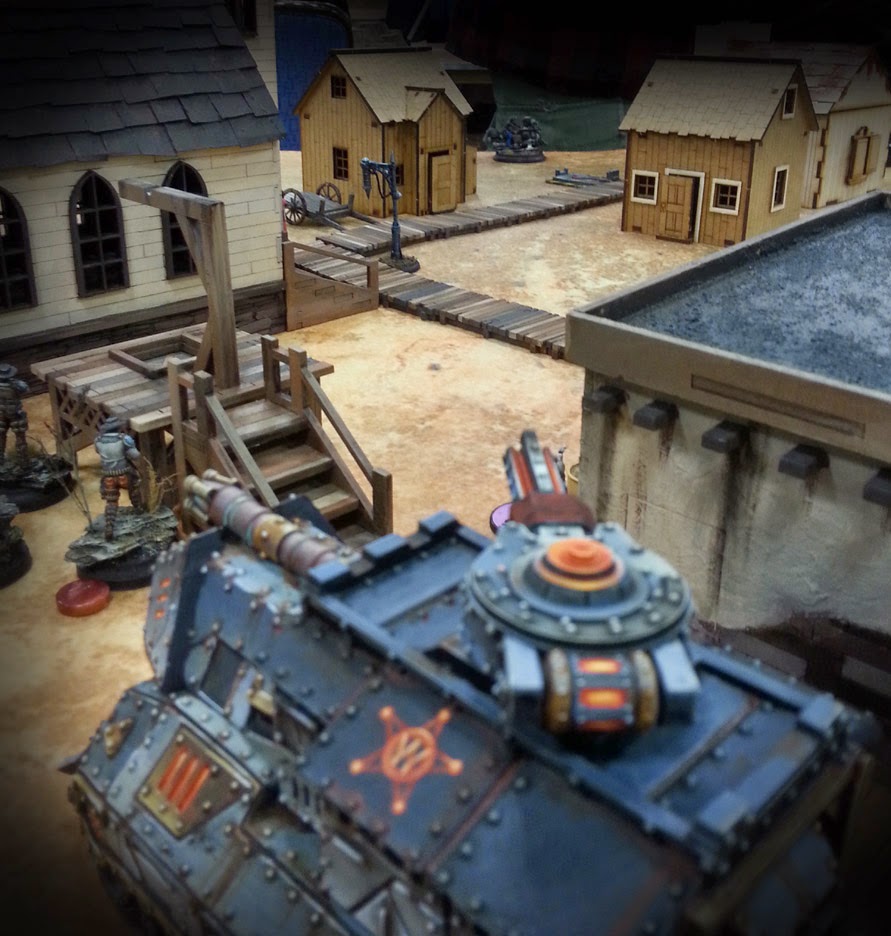 You can see that the group of valuable ponies was now beginning to drift towards the Outlaws and Apache Kid.  This would be a huge problem for the Lawmen is this continued!

Judge Stern pressed the advance toward the water tower, backed up by the Interceptors.  They continued their attempts to keep the heads of the Outlaws down while the hired hands moved to take up positions by the outhouse and ammo cases. 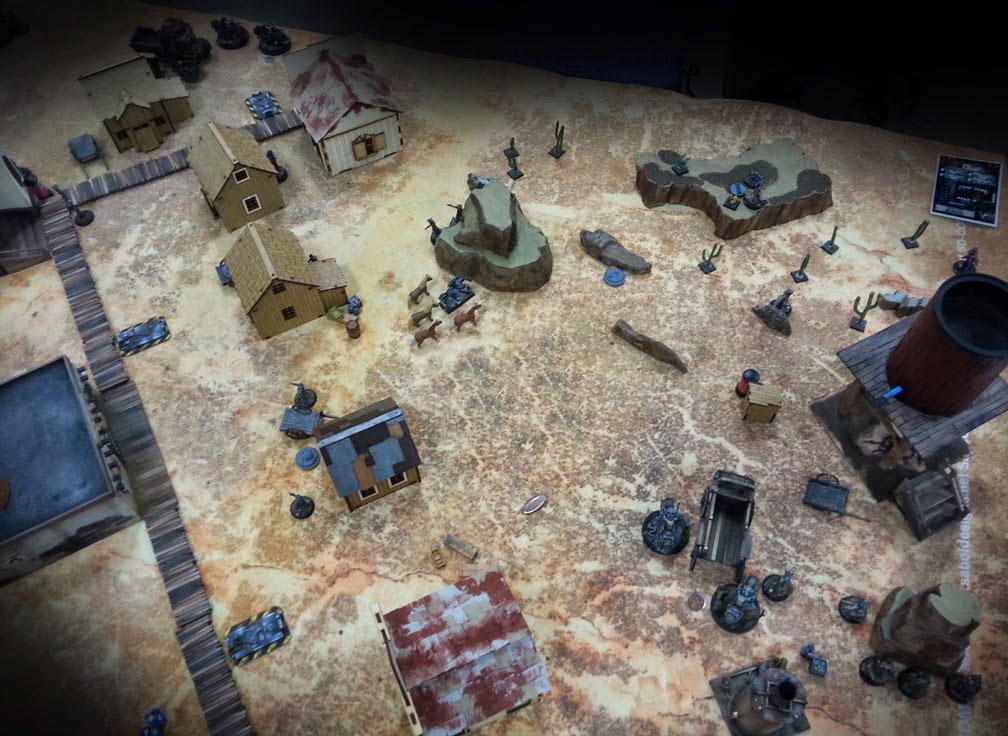 Eventually, the Outlaws were able to detonate most of the mines by shooting at them. 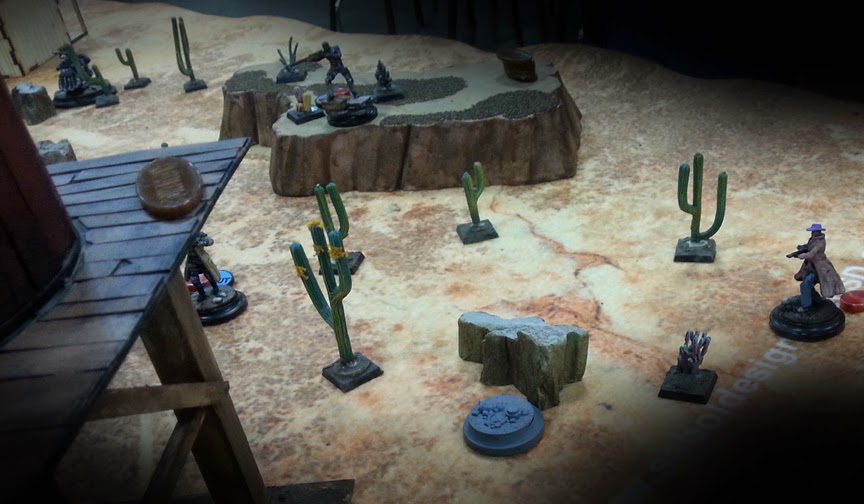 Looks like someone is about to heed the Call of Nature!

He doesn't have much privacy, however, as a pair of Outlaws popped up from behind the rock formations. 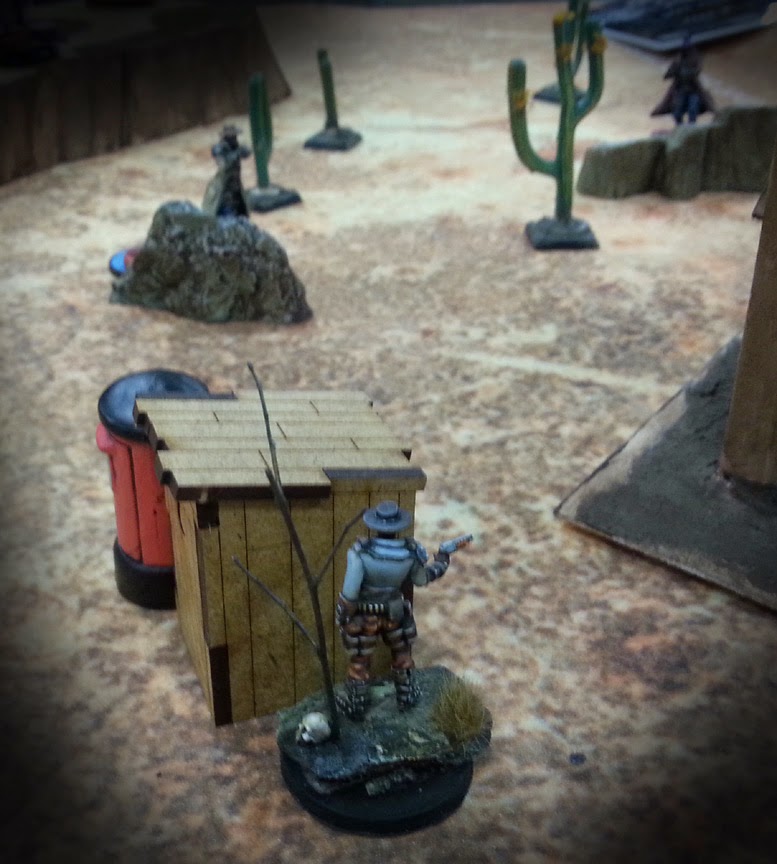 Despite suffering casualties to withering Outlaw fire, the Lawmen pressed their advance on the water tower. 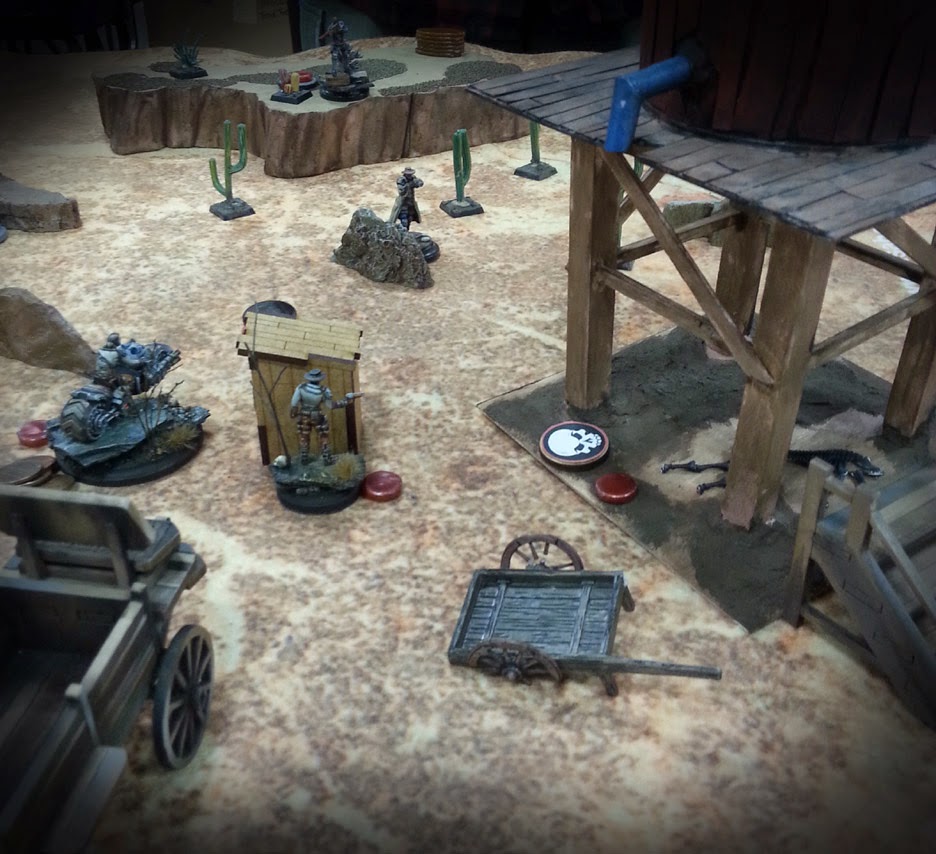 By this time, our little scrap was drawing a lot of attention in the open gaming area.  A number of the intrigued observers became new converts to the Wild West! 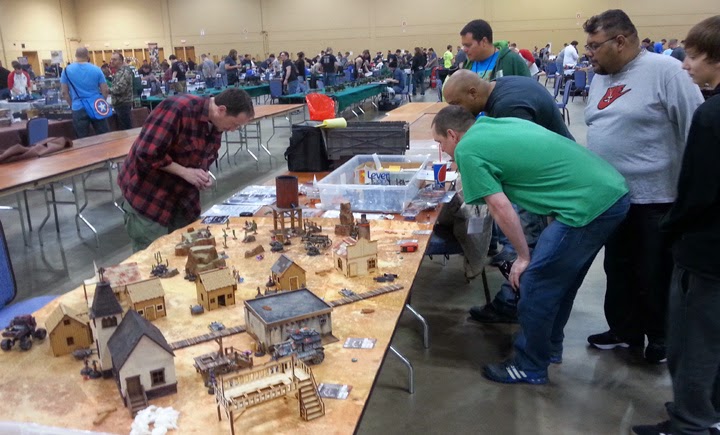 It was at this moment that Apache Kid made his move toward the ponies.  He used his uncanny ability for climbing to scramble around the mesa to move the small herd to some other waiting hired hands. 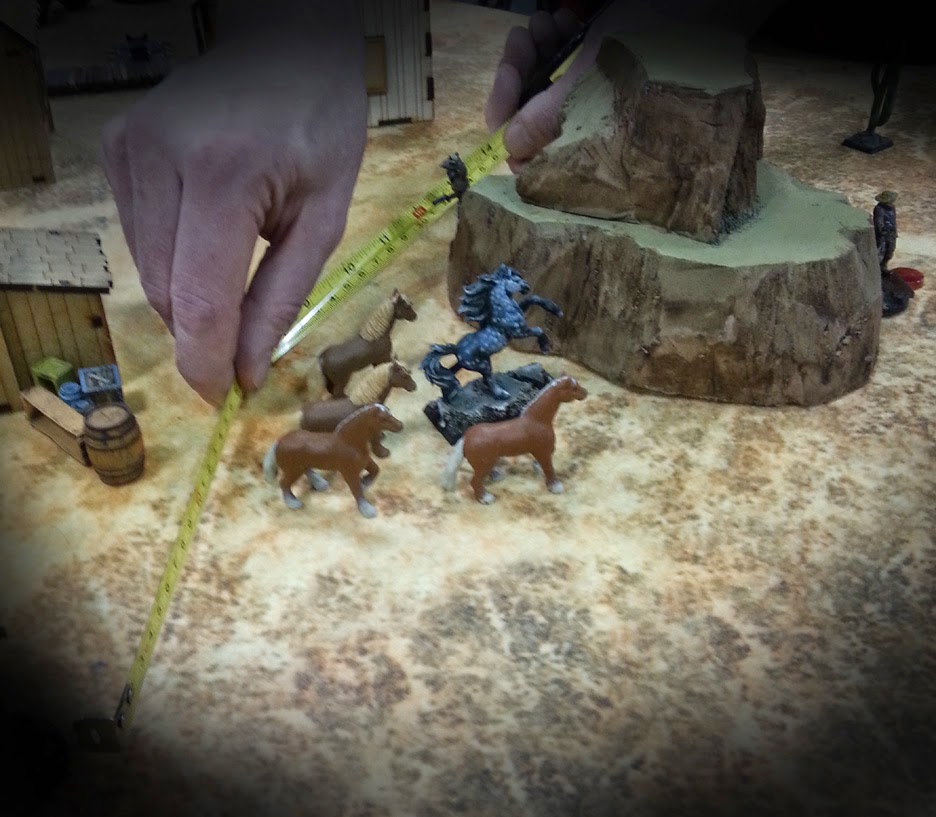 Miss Fannie decided to speak with a few of the Outlaws, and they discussed the sorry state of the decor in her establishment with the loss of the draperies. 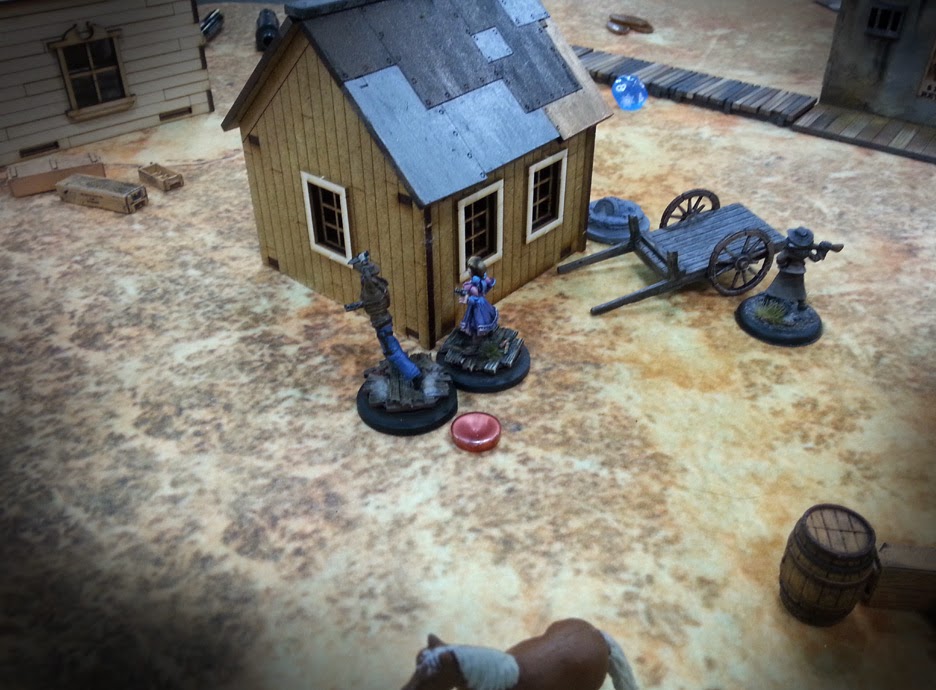 In a very dramatic and dangerous move, Billy crashed through the windows of the church, killing one very surprised hired hand!

At the same moment, the robed stranger pointed toward the church... 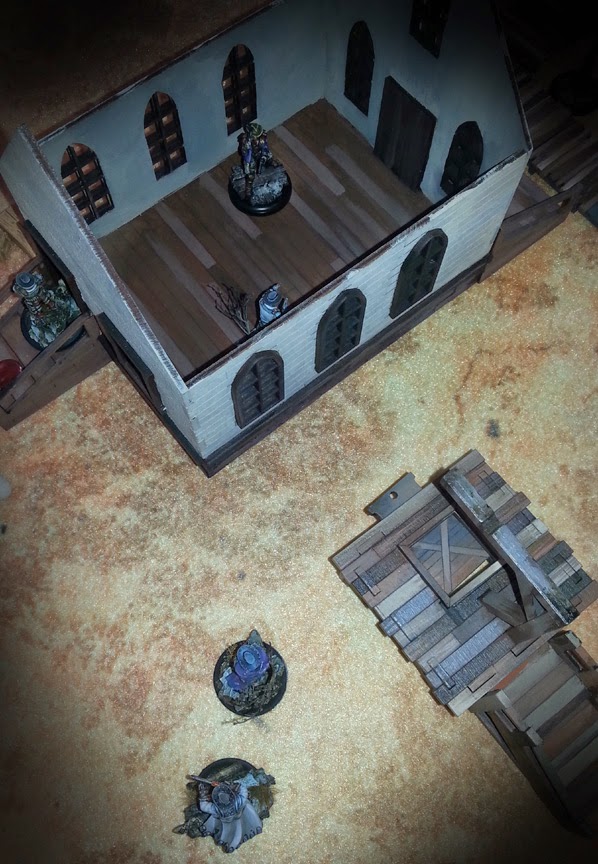 While Warren felt a chill down his spine, and felt as if he should never trust the shadowy figure, he was compelled to press forward. 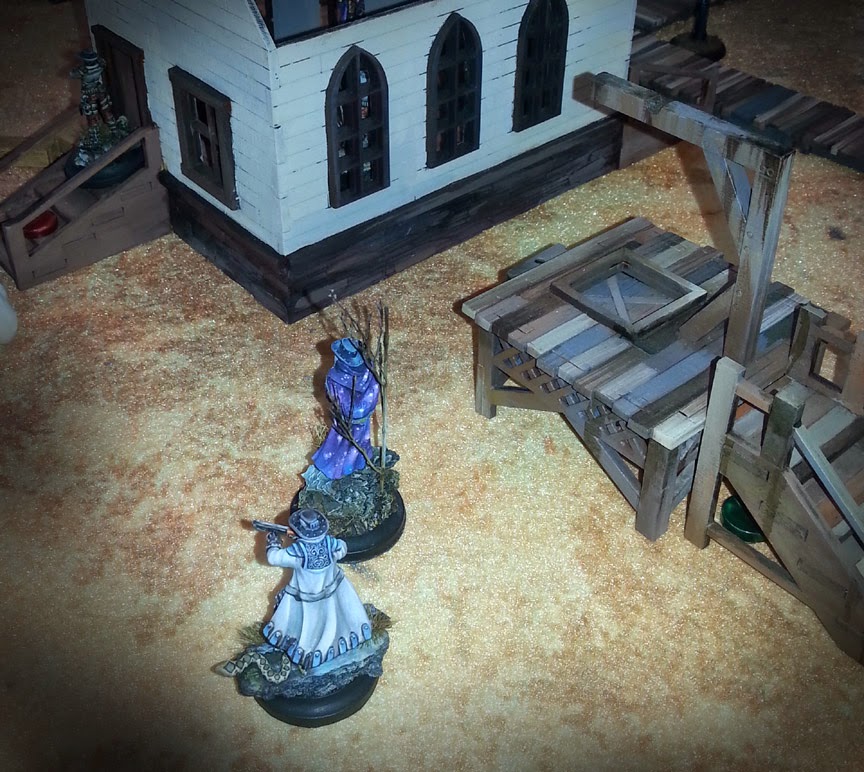 It was quite clear to him once he reached the rear window of the church what he must do.  He would direct the fire of the Judgment snare gun.

While this was a potent and deadly weapon, it is notoriously unreliable, and a very short range.  Taking Billy prisoner would be the perfect way to prove his mettle to his brothers. 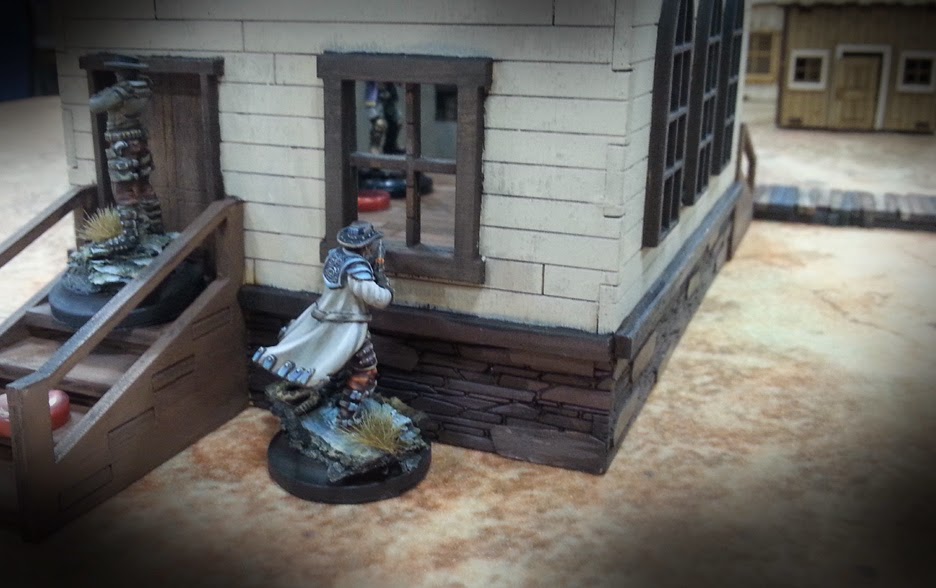 The sacrifice of the hired hands was well worth it, as Billy was now Dangerously close to the windows!  The snare net was fired, and the shocked Outlaw boss was dragged back into the Judgement!!! 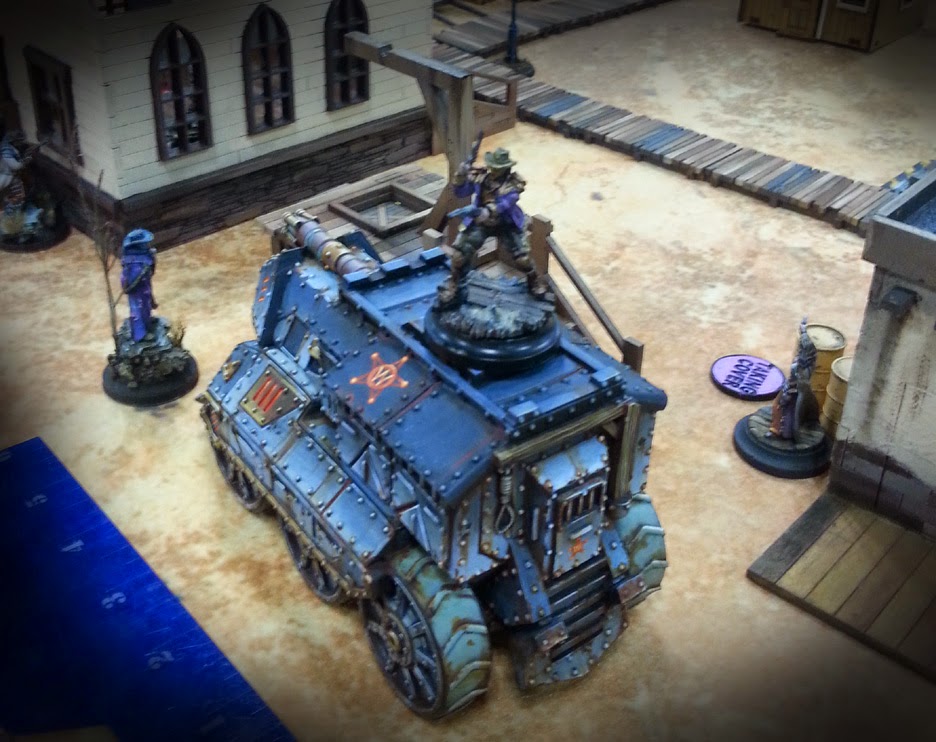 The rest of the Outlaws watched in horror as the mobile gallows did their grisly work.  As decreed by Judge Stern, Billy the Kid was hung by the neck until he was dead. 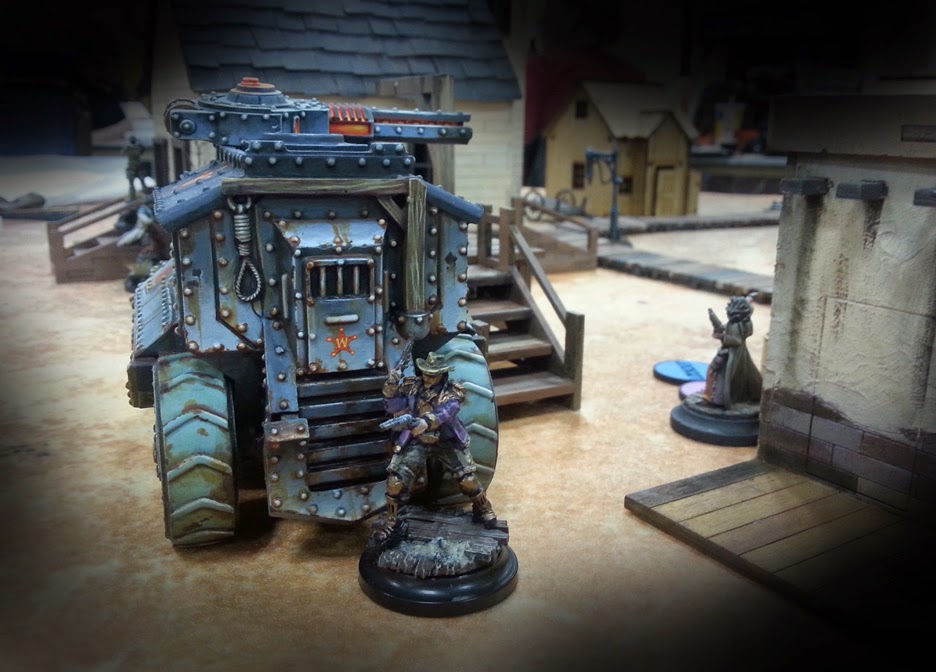 Despite the loss of their leader, some of the Outlaws continued to go after the horses, guided by Miss Fannie and the Preacher's wife.  This treachery would not go unnoticed by Judge Stern.

There would be hell to pay for such fraternization. 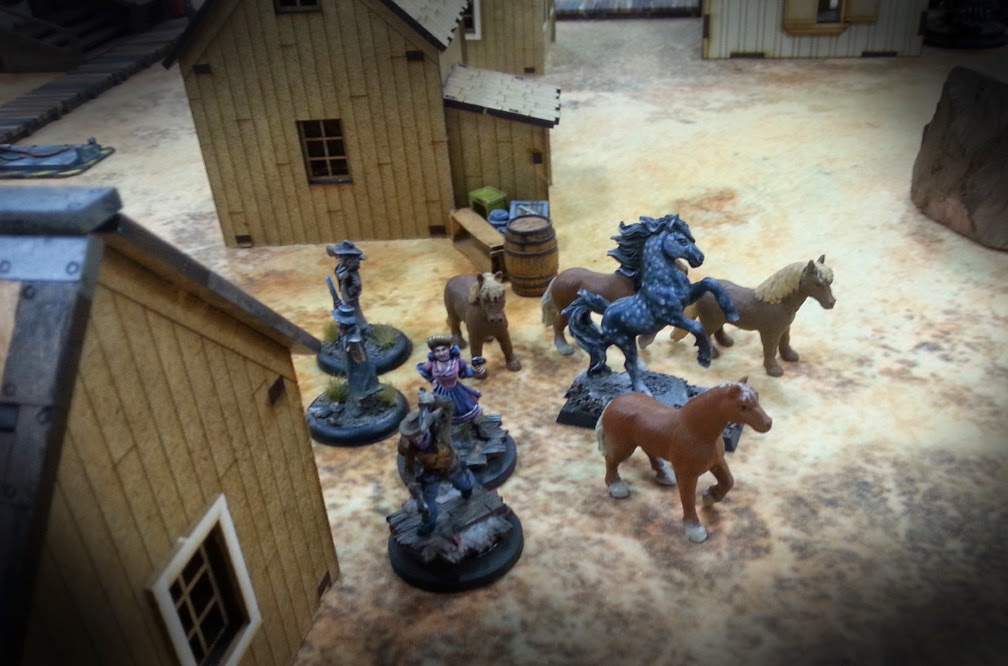 Speaking of Judge Stern, he was very busy attempting to Irradiate Ike Clanton in the healthy red glow of RJ-1027 energy. 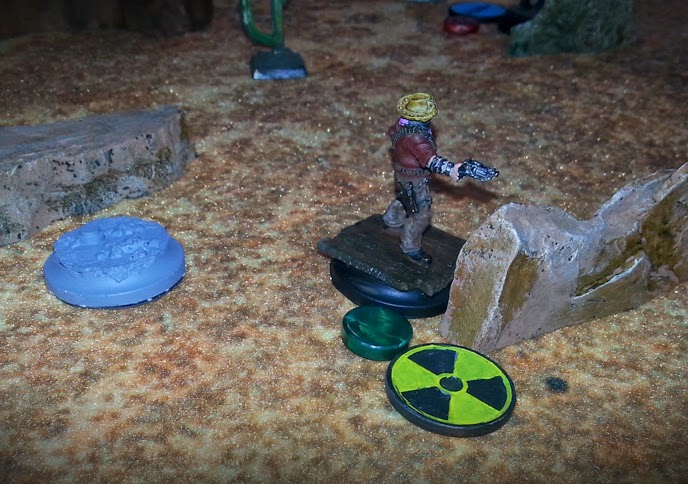 Ike responded with a number of devastating barrages against the Interceptors.  Apache Kid would use his dreaded Spirit Aim to finish them off. 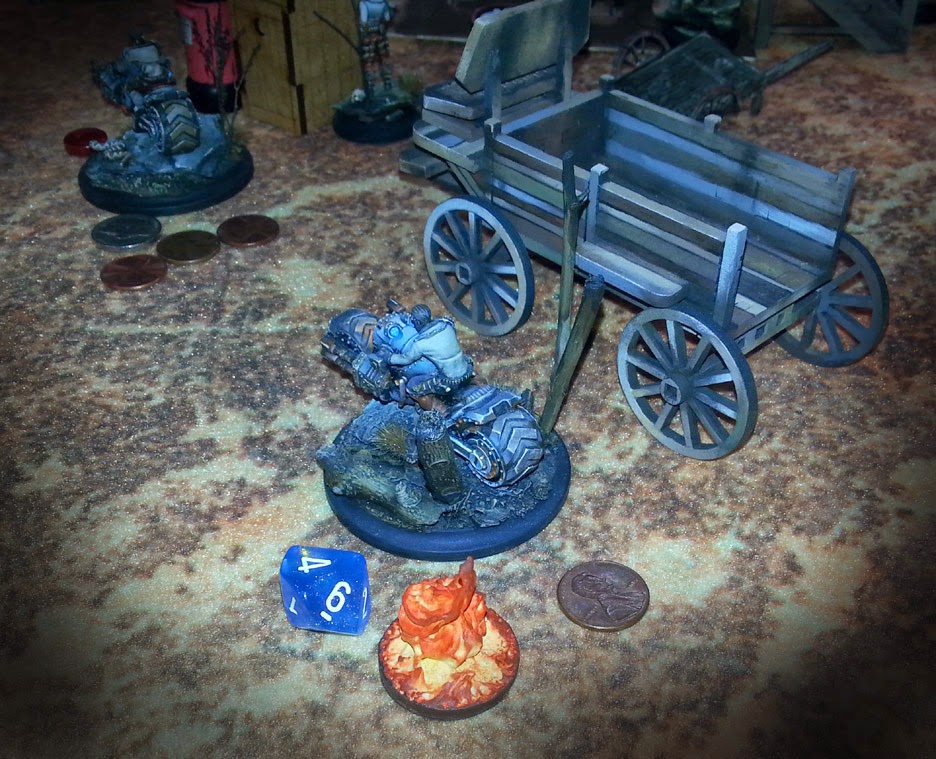 Just as the Lawmen were getting into position for an all out close assault lead by the Judge, yet another shadowy figure on the low mesa appeared.  He was beckoning the Outlaws, who promptly abandoned whatever they were doing and headed in his direction.

Strange that so close to potential victory, they would choose to flee.  It certainly unnerved the surviving Lawmen who witnessed it.

And so it was that the town of Wappelville was saved from the vile influence of the Outlaws.  It was the Outlaws who suffered the greatest loss, as Billy lay dead in the morgue.

Rest assured, this would draw out the ever elusive Jesse James!  Judge Stern decided that Billy's body would be on display in the church where he first fell, with the Reward sign above it.

It would prove that no one can hide from the Law forever.  Stay tuned!!! 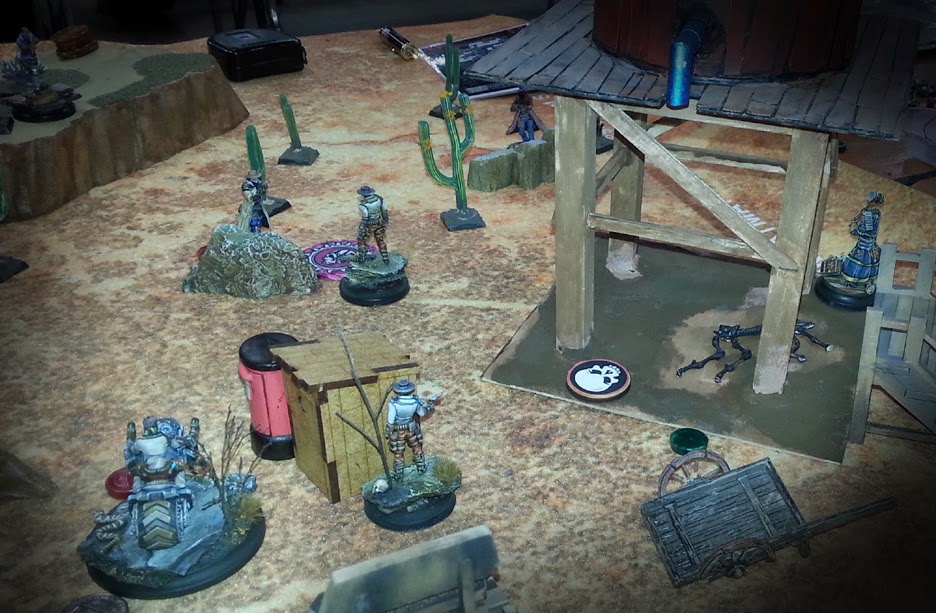