The Bridge to Nouvion 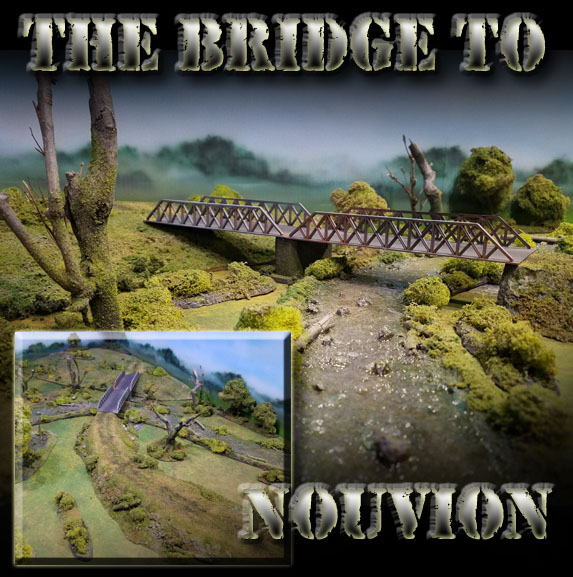 To wrap up this latest terrain building series, I wanted to show you how things looked on the table. 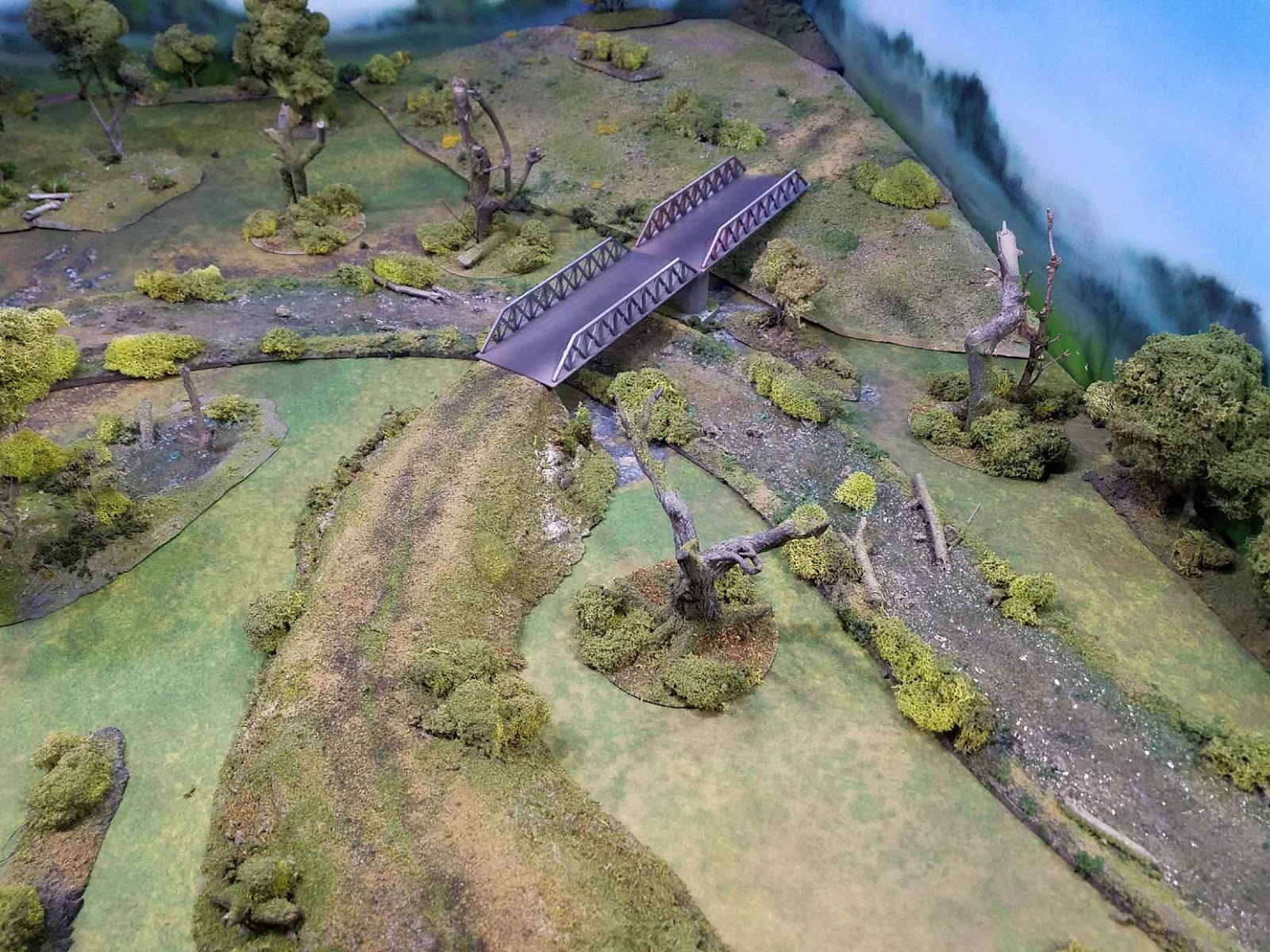 As a reminder, I wanted to "extend" the banks of the river a little bit without having to create a new one.  So, I found these older tree stands I had made and revamped them: 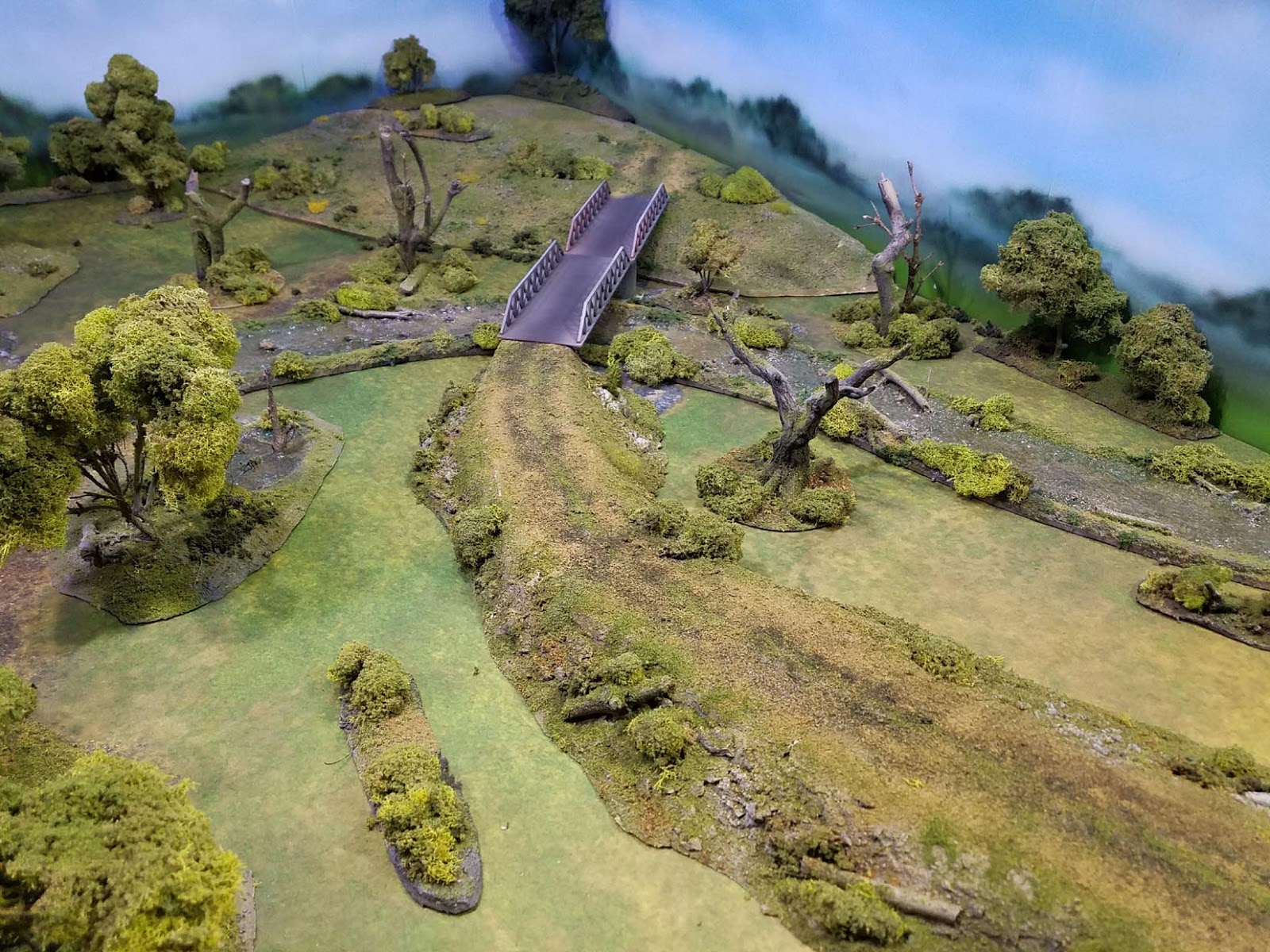 I was extremely happy at the way the ground up loose leaf tea leaves matched the battle mat!  This is still the grassland/forest mat from TableWar. 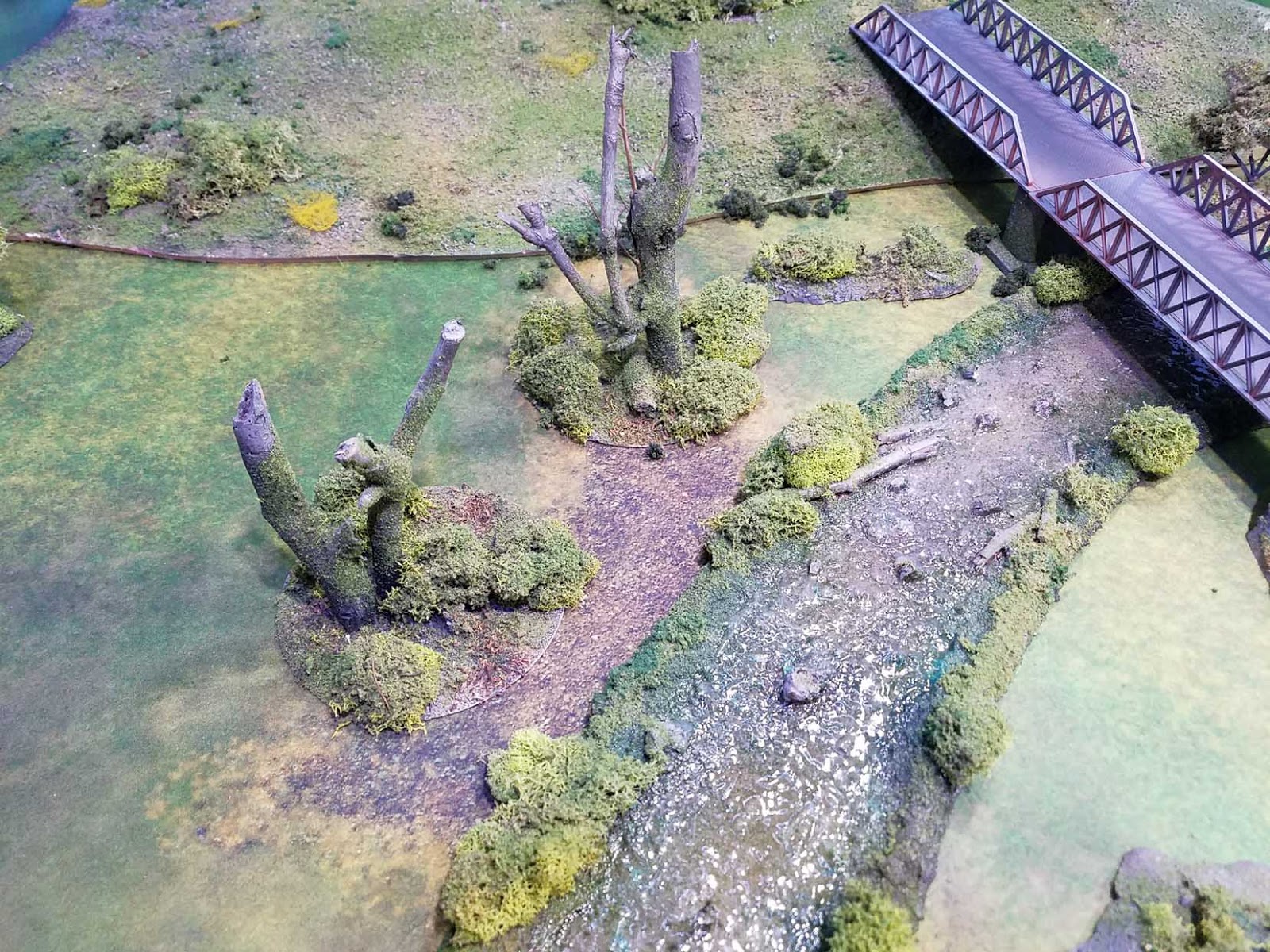 This view gives you an idea of how much the river is now extended.  There is now rough ground extending several inches on either side, which should create the obstacle that I need.

Creating a bridgehead on the opposite bank will be difficult, but there are significant victory point rewards for doing so.  I have also sculpted some boats for the Axis forces to use in this mission! 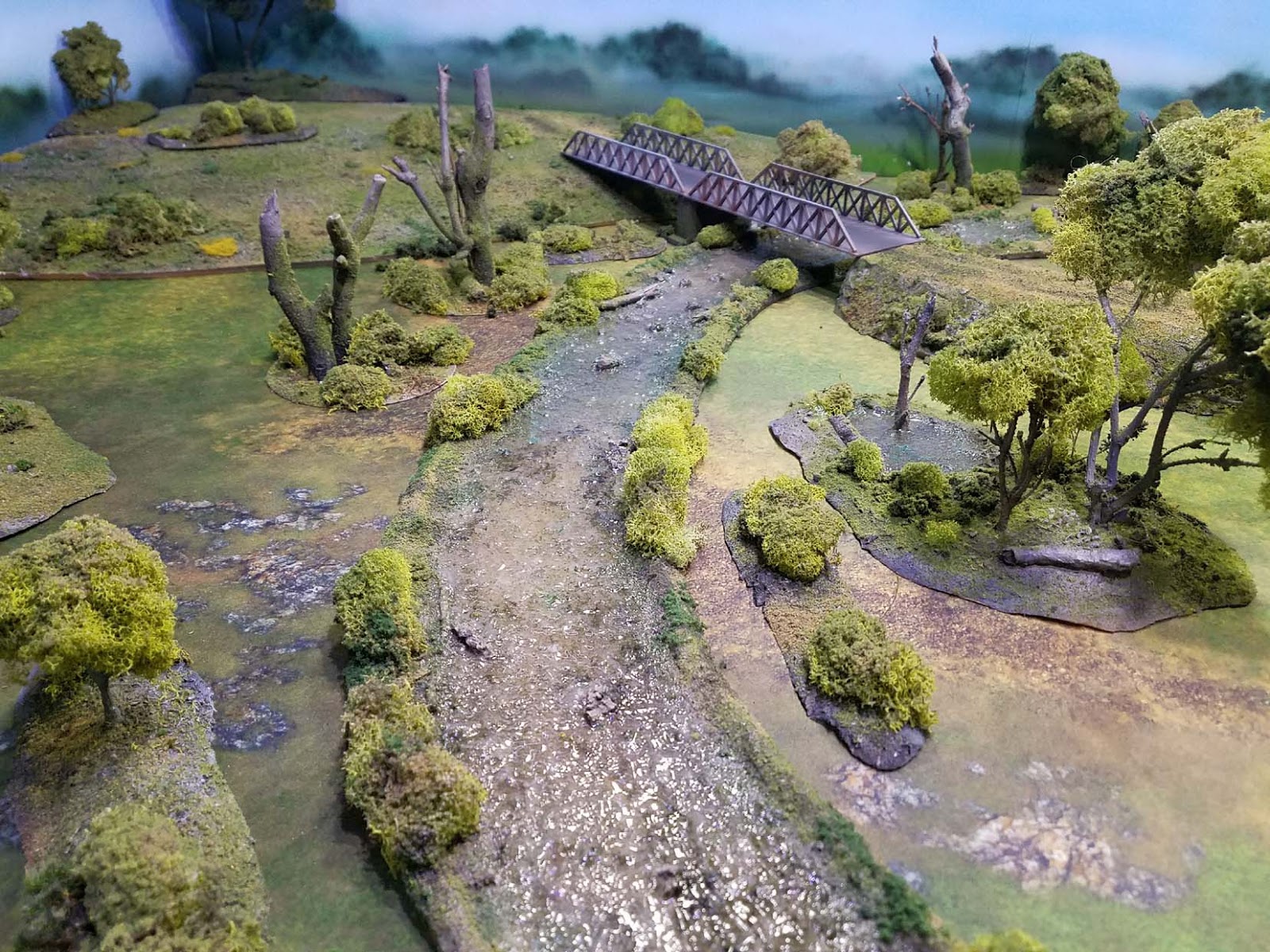 This is the sector where most of the British forces will begin the game.  Again, the mission is to evacuate as many units off the board as possible.  They are going to have to use the road, unlike the supporting French units which are acting as a holding force. 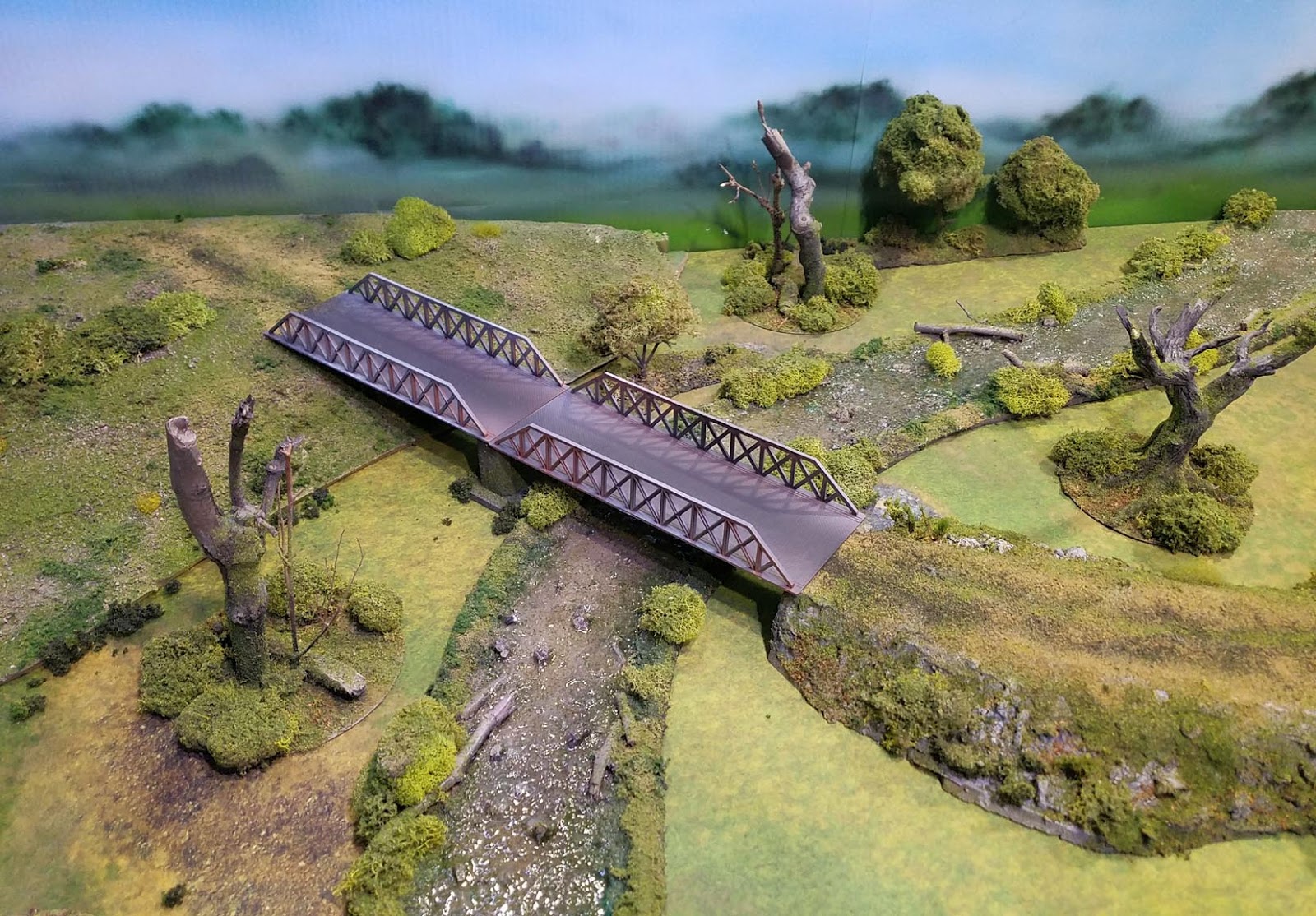 The Long Road to Nouvion and safety is going to be a hazardous one.  If British infantry units choose to take up positions around the embankment, they can still score some Victory Points by wiping out Axis units, but they are more valuable getting off the board. 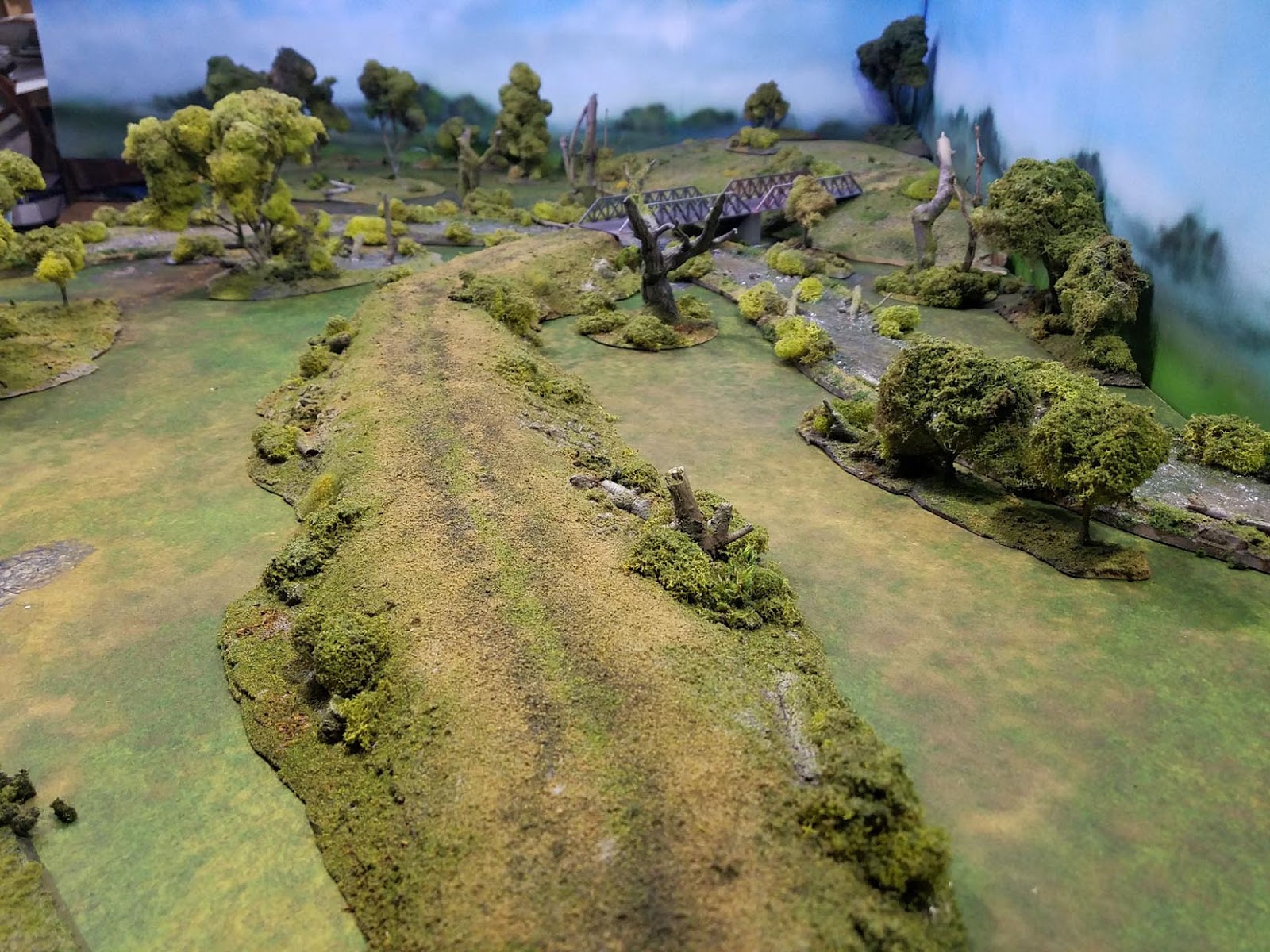 The road seems very exposed, but there are a number of tree stands in the way, which serve as dense terrain.  The British units will have to take advantage of the initial Axis waves picking their way through all the dense foliage, the marshy banks and the river itself. 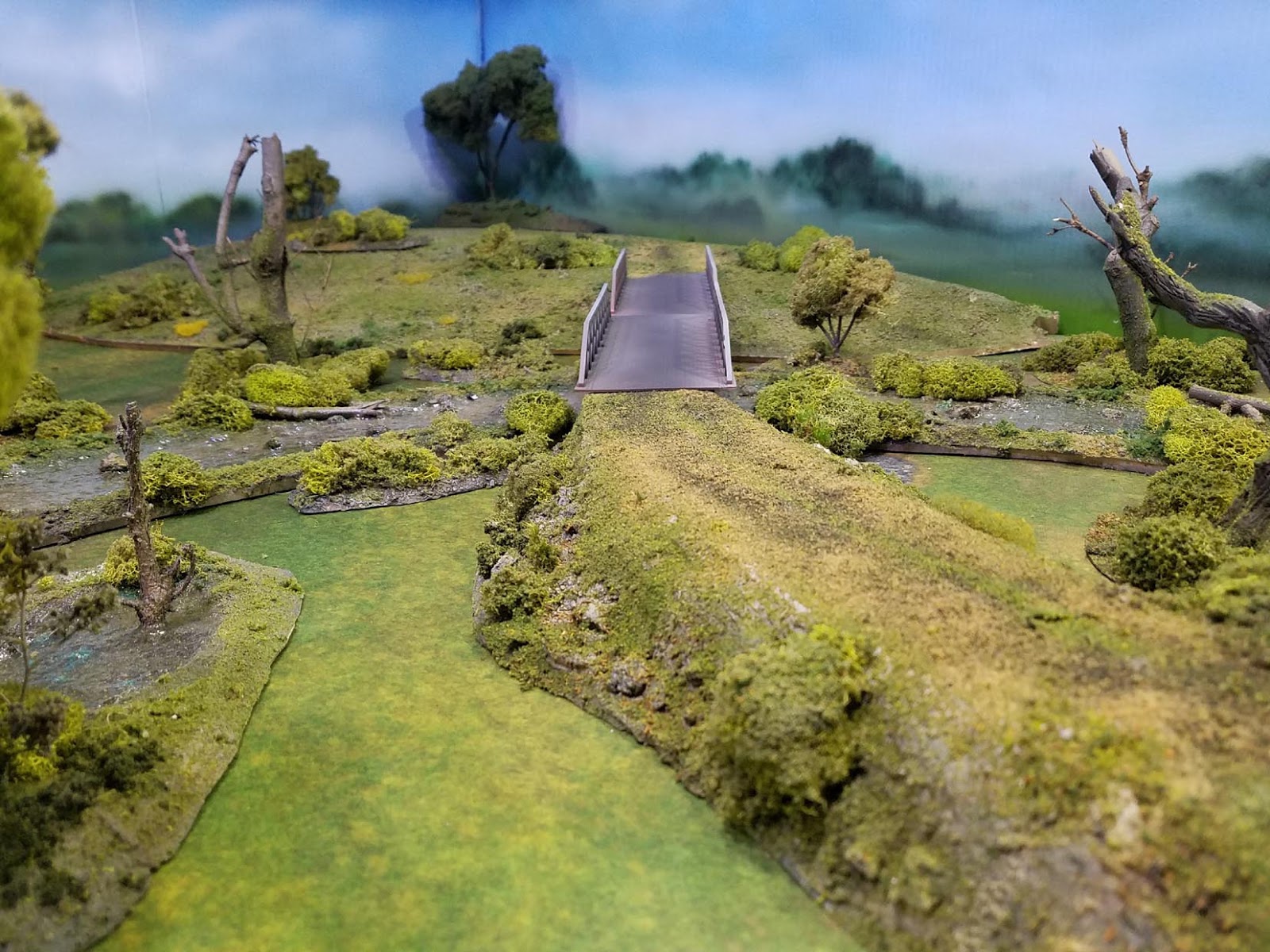 As the game moves along, there will be additional areas for the Axis units to enter the board.  In the latter half of the game, they will be able to enter through this edge, which might give them an easier field of fire at the retreating British units.

There will be some French defenders in their path, and they might be well dug in by that point. 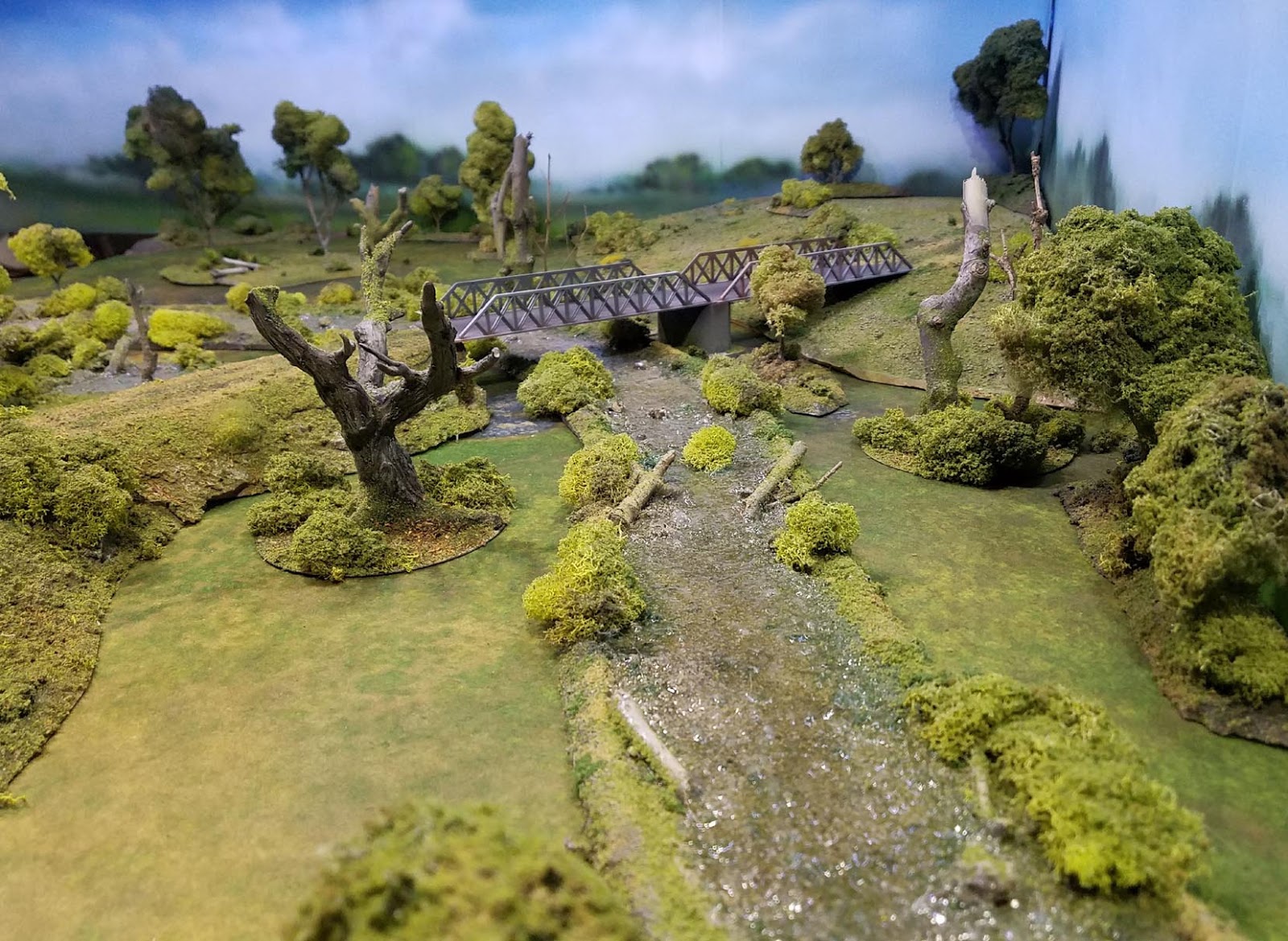 As another point to note... the bridge cannot be destroyed!  The British need it to retreat, and the Axis forces would prefer to keep it intact themselves.  I do intend to have other missions where demolition is goal, so don't worry!

The Axis forces are primarily an advance probing force, which also contains some armored elements.  You might even see a certain commander from Arras in his Panzer 38T! 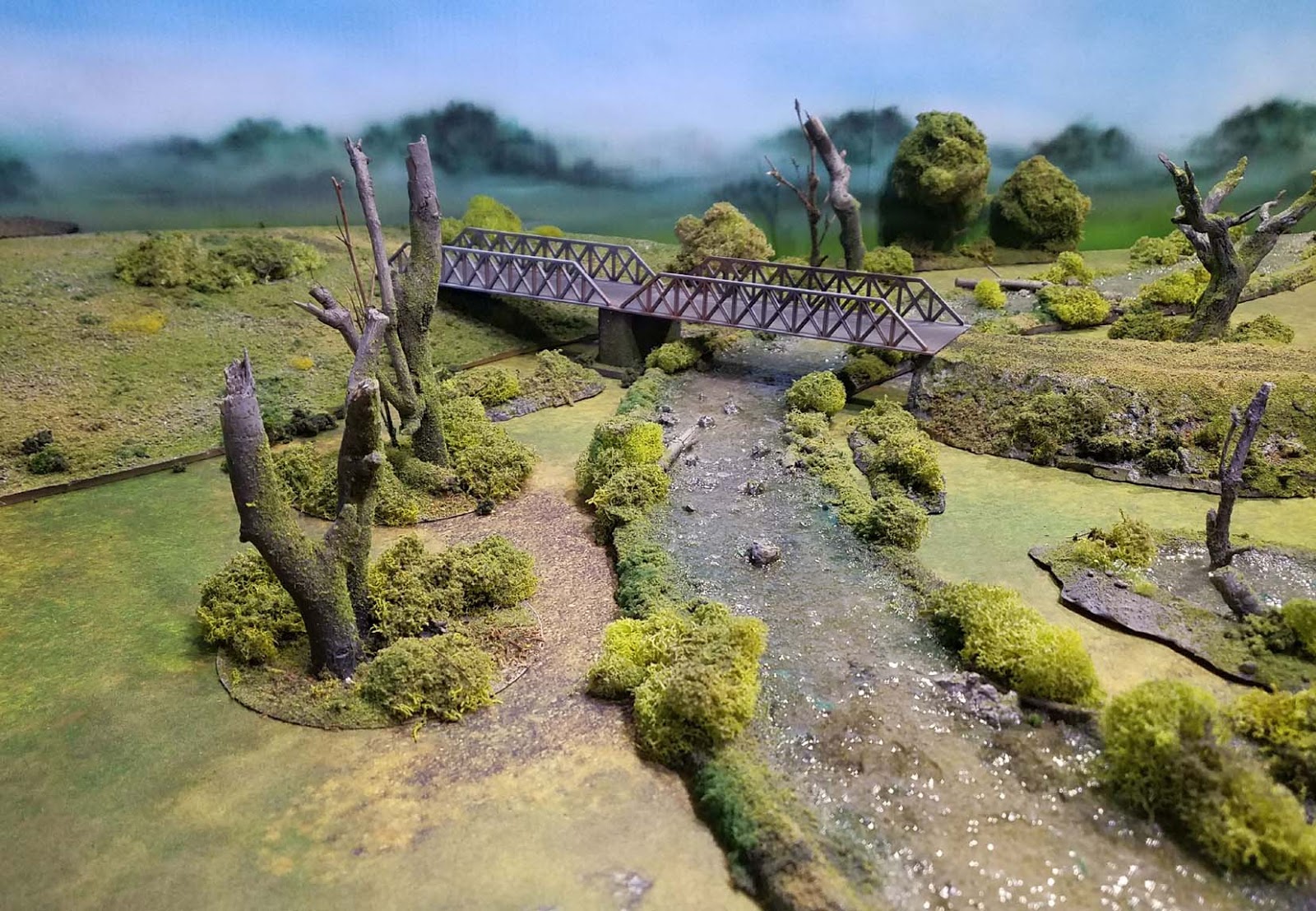 I will be curious to see if this game involves the kind of close quarter fighting that was seen the the last battle report... Blood At Arras. There will be a larger contingent of Axis AFV's this time around, so I think that might get in the way.

Here's a link to that one to get you caught up: 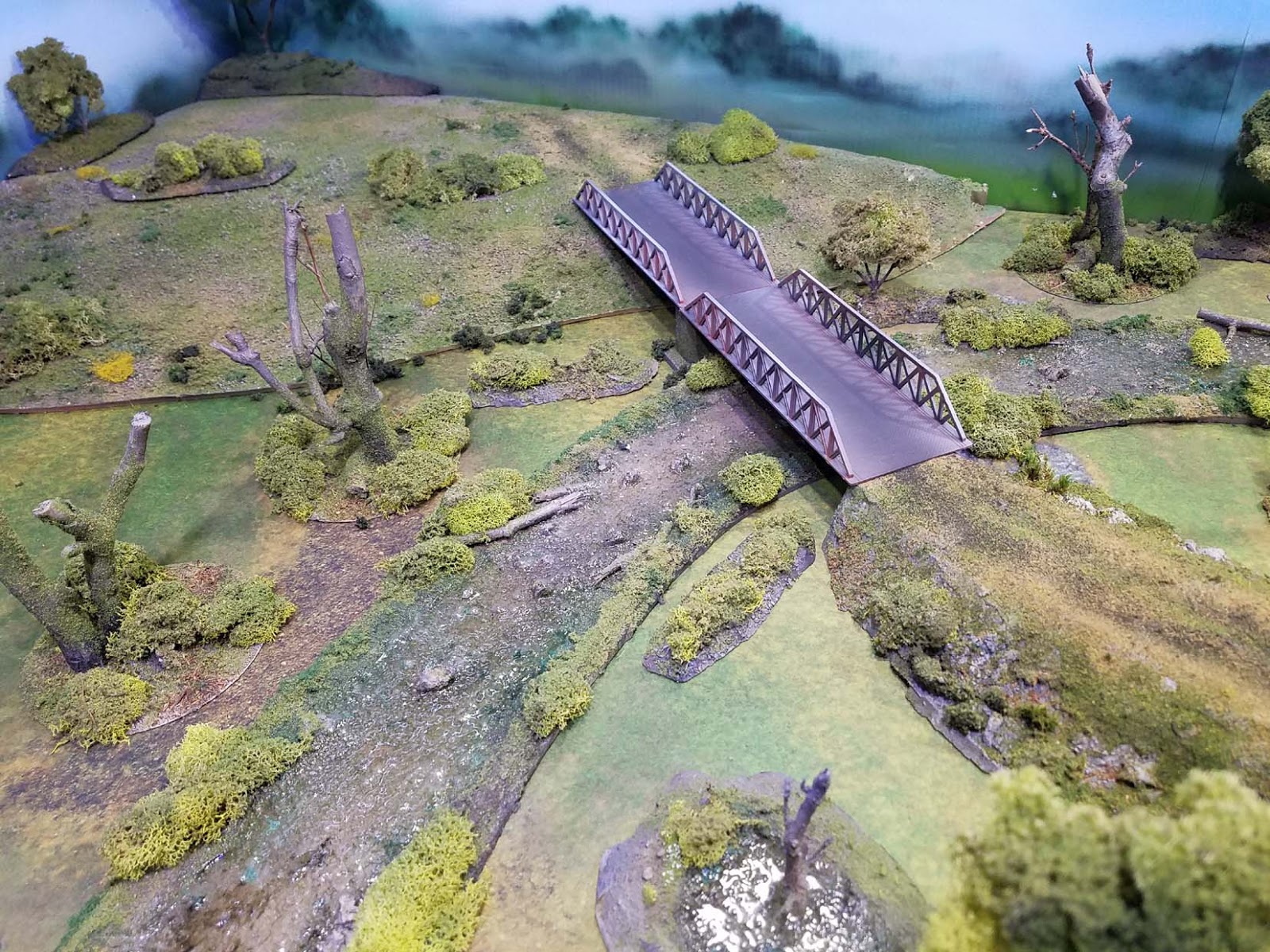 If you recall back to the original post, the idea behind these new terrain pieces is to make them as multi purpose as I can.  I had hoped to use this embankment as a ridge line in future battle reports, with trees and gun positions at the top.

You can see those smaller tree stands on top of the ridge. 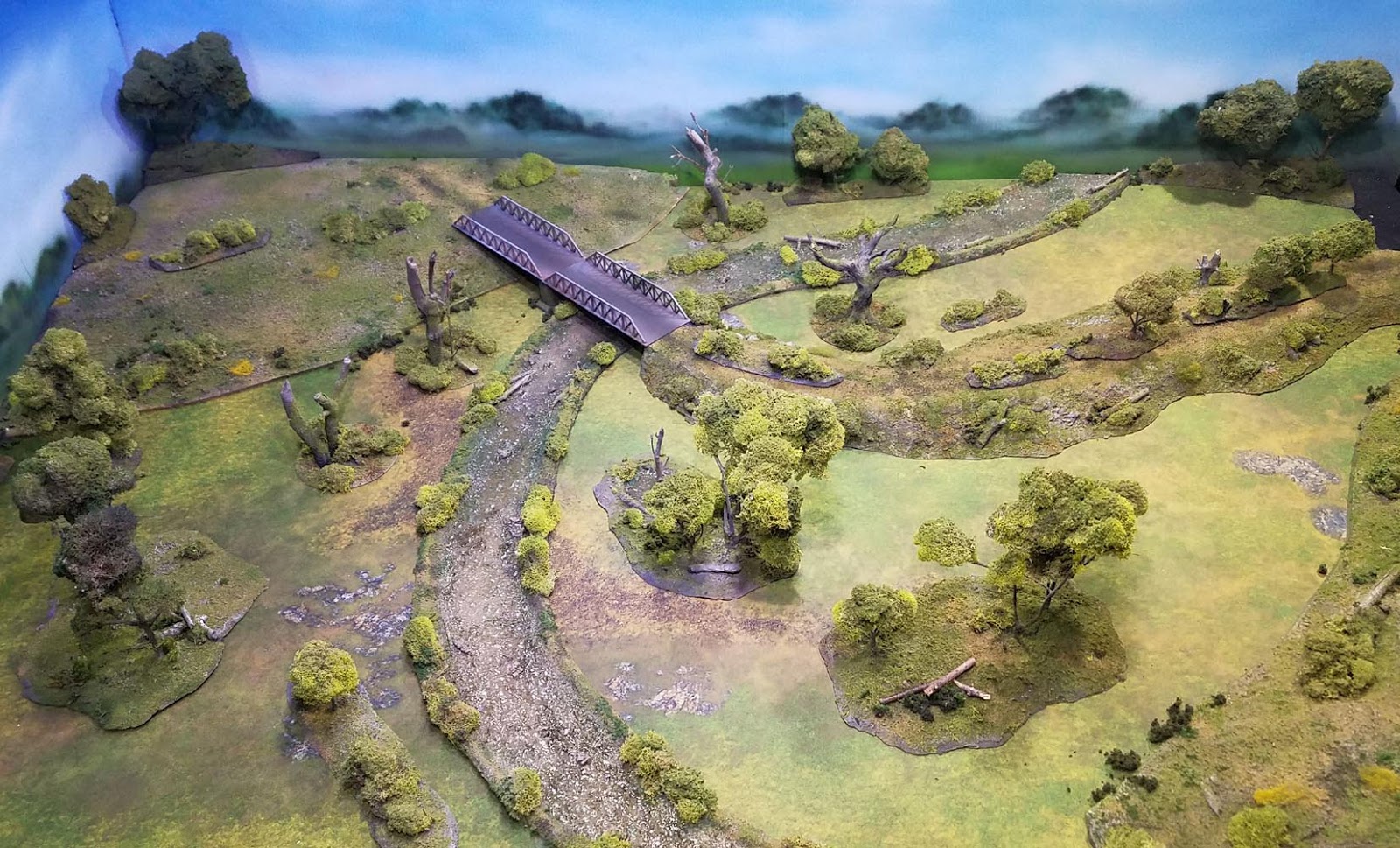 This is the reason I did not sculpt in the usual road tracks, choosing to create the impression of such an effect with flock only.  Now that my tree stands are in place, the "road" is effectively invisible! 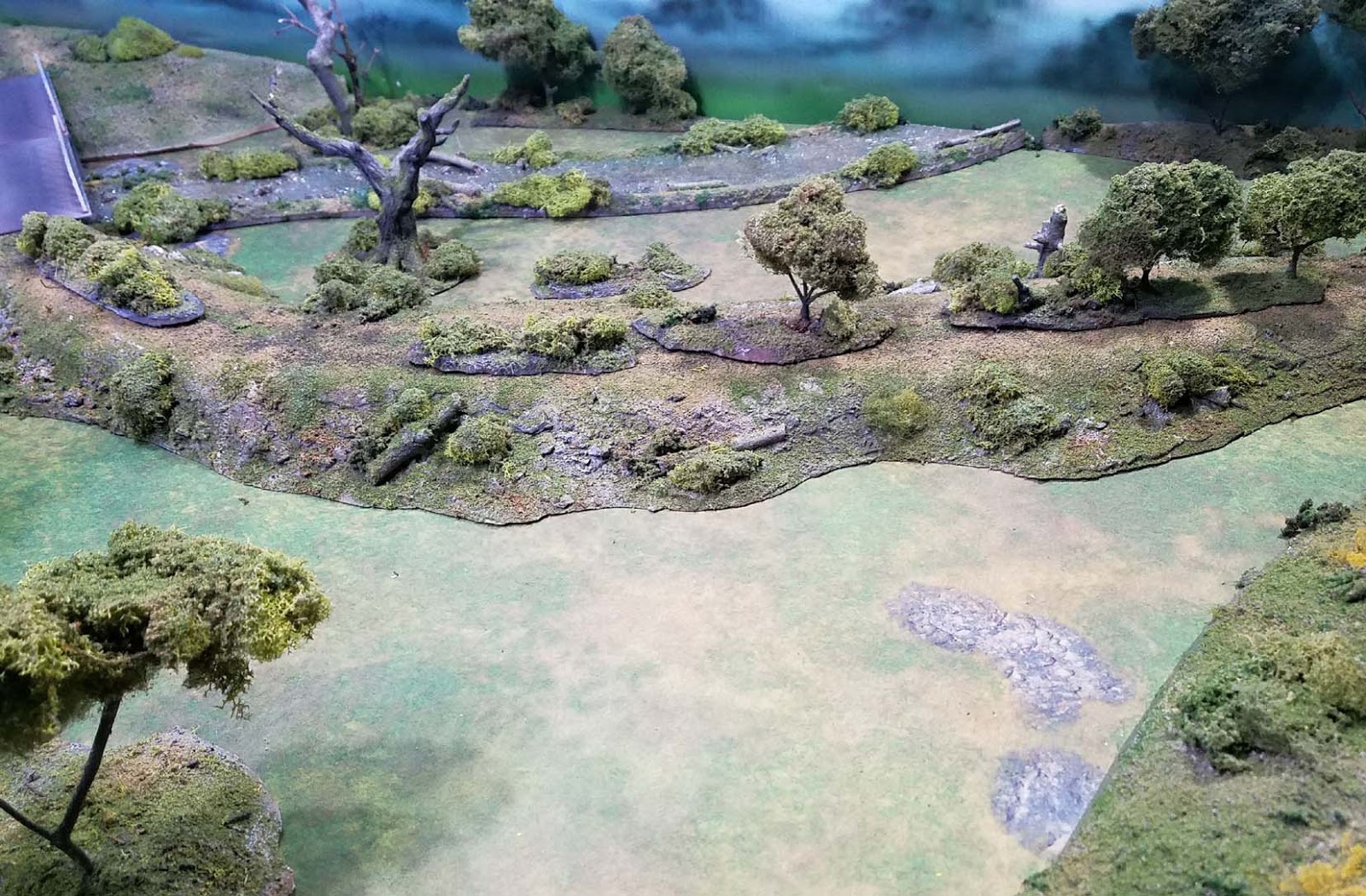 I am painting the rubber boats and other odds and ends which will make their first appearance in the "Bridge to Nouvion".  Changing the missions, terrain forces and various units in each of these reports takes a great deal of time, which is why it is taking me a bit longer to get each one made.  Once the terrain and the units are completed, it will be a little easier!

Any support that you can offer on the Patreon Page is also a huge help, since it offsets the many hours of building, painting, terrain construction, filming, editing and so on! 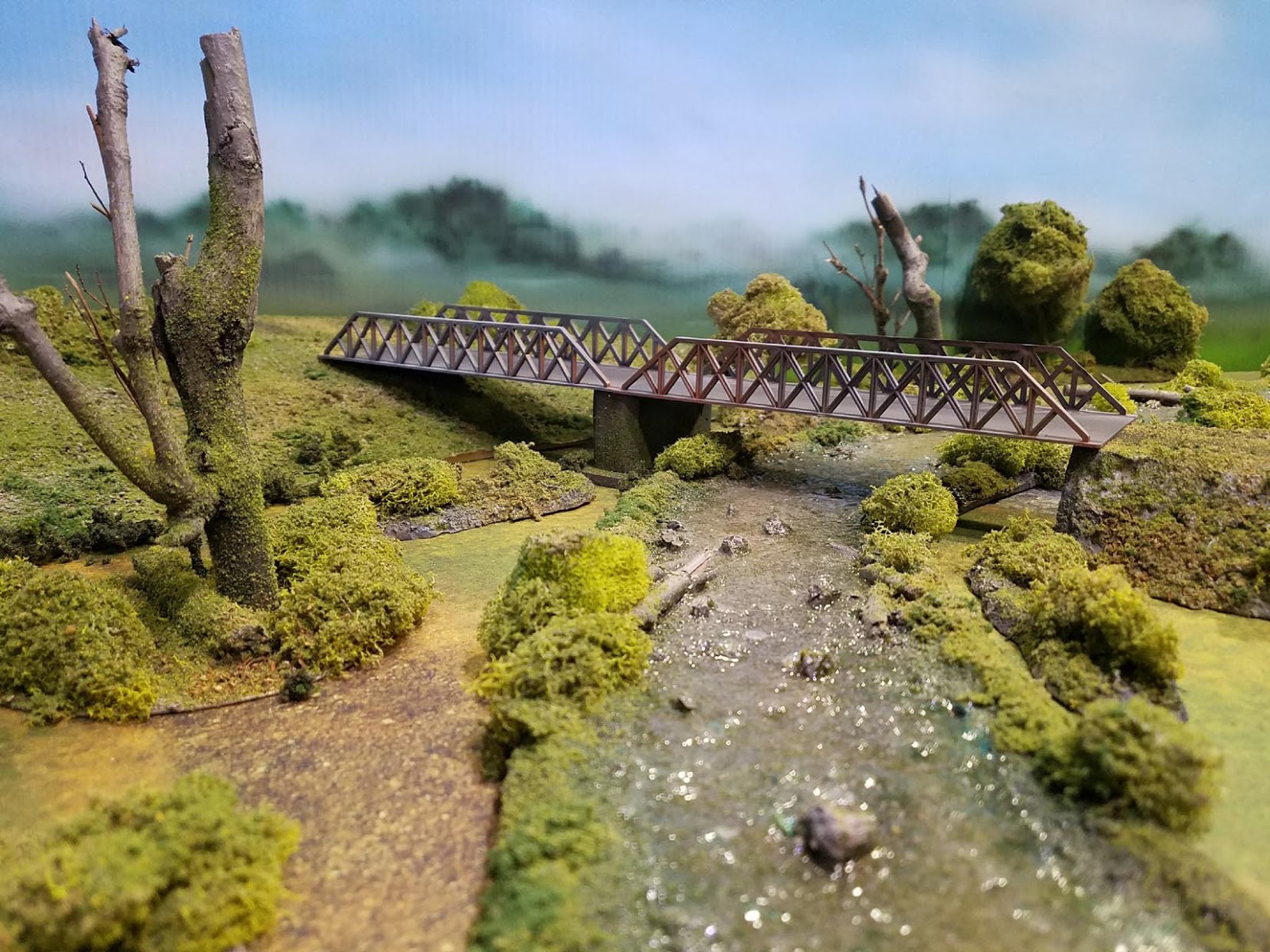 Posted by wappellious at 3:07 PM 2 comments: