Hauling more loot from the Tomb Cities of Pseusenes... 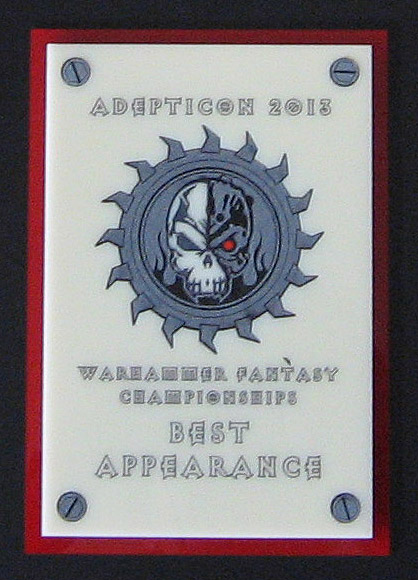 Yes, indeed.  All those who raid the Tomb Cities of Pseusenes shall suffer a fate worse than death!

Many of you have seen the very spectacular Empire Marienburg themed army.  That was the major battle for painting awards this year, as my Lizards battled Monty Python Ogres last year :-)

My biggest regret is that we did not get to play each other.  The mere thought of the images that could have emerged from that battle blows my mind.  I am kicking myself for not begging Alex to pair us up for the first round!  Stupid mistake by me.

As you can see, the Tainted Pharaoh (with the aid of the Tzeentch God) was able to achieve a Best Appearance award after driving the judges insane for a few hours :-)

In addition, the Lord of Change was able to claim yet another prize.  The other players in the room saw fit to declare the Tomb Kings as their choice for Player's choice Appearance.  They did not make that one lightly at all.  It was amazing to see one player after another stalking around the room just like the paint judges!

For all those who took the time to look at all the tiny little details on the army board, the movement trays, bases, etc.  I had feared that they would all go unnoticed, and that had weighed heavily on me for many months.

As you can see, Alex had some nifty swag set aside for the awards!  Many thanks to Alex, K-Ann, Scott, and everyone who worked so hard to make that happen. 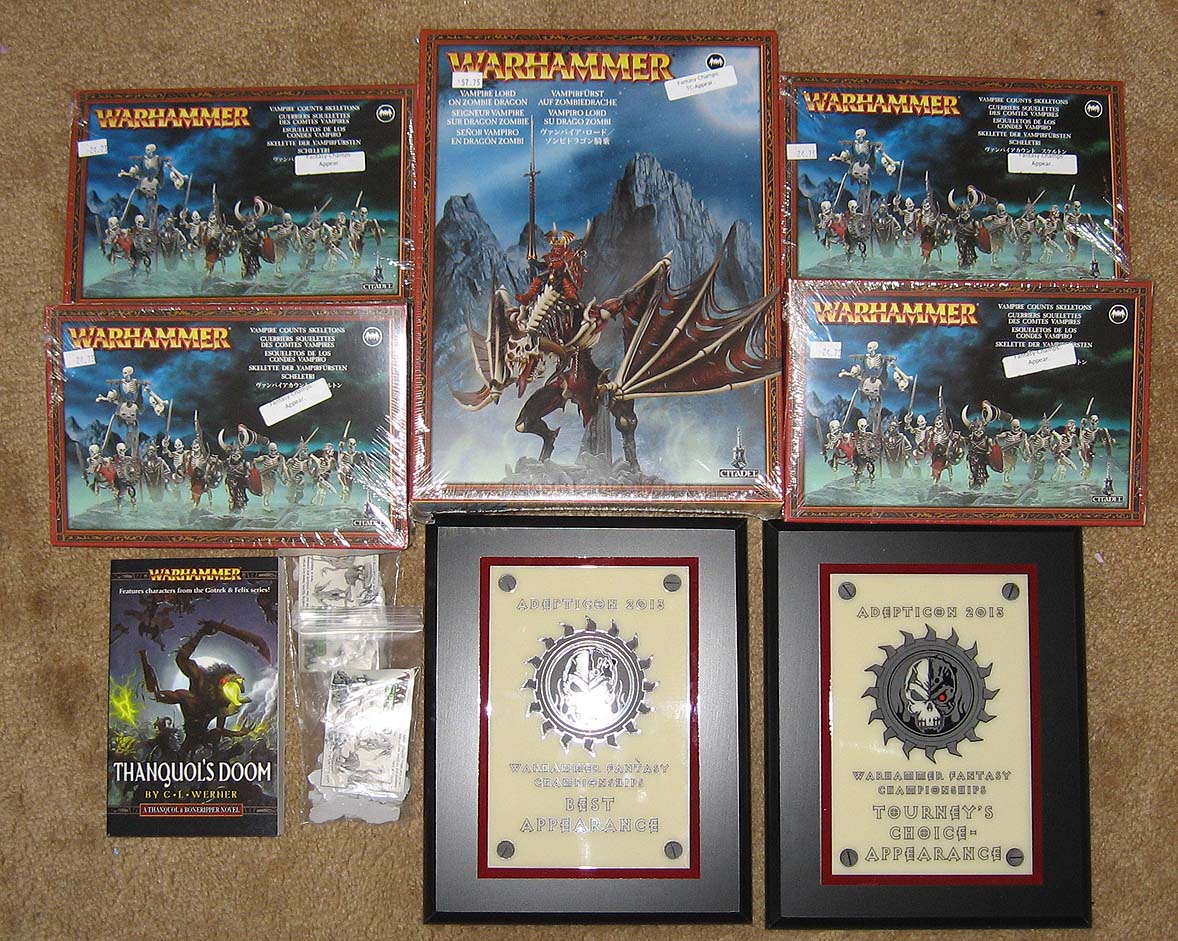 These awards mean way more to me than a Golden Demon.  In fact, if you were to ask me if I wanted a Slayer Sword or just one of these plaques, I would keep exactly what I have without hesitation.

What I enjoy is creating armies.  Each part of the project is just as important at the rest.

The fact that other players, who know what that entails, would see fit to choose the Tomb Kings with all the great stuff in that room is amazing.  It is much appreciated.  There were many times where I had considered doing way less, just so that I could get some sleep.  I just could not let that happen.  I had to fight through those moments and continue with the plan to the end.

I am incredibly happy that it all worked out.

Crazy as this will sound, the next army might make this one look like a kindergarten project.  That's why it's on the 2 year plan. :-) 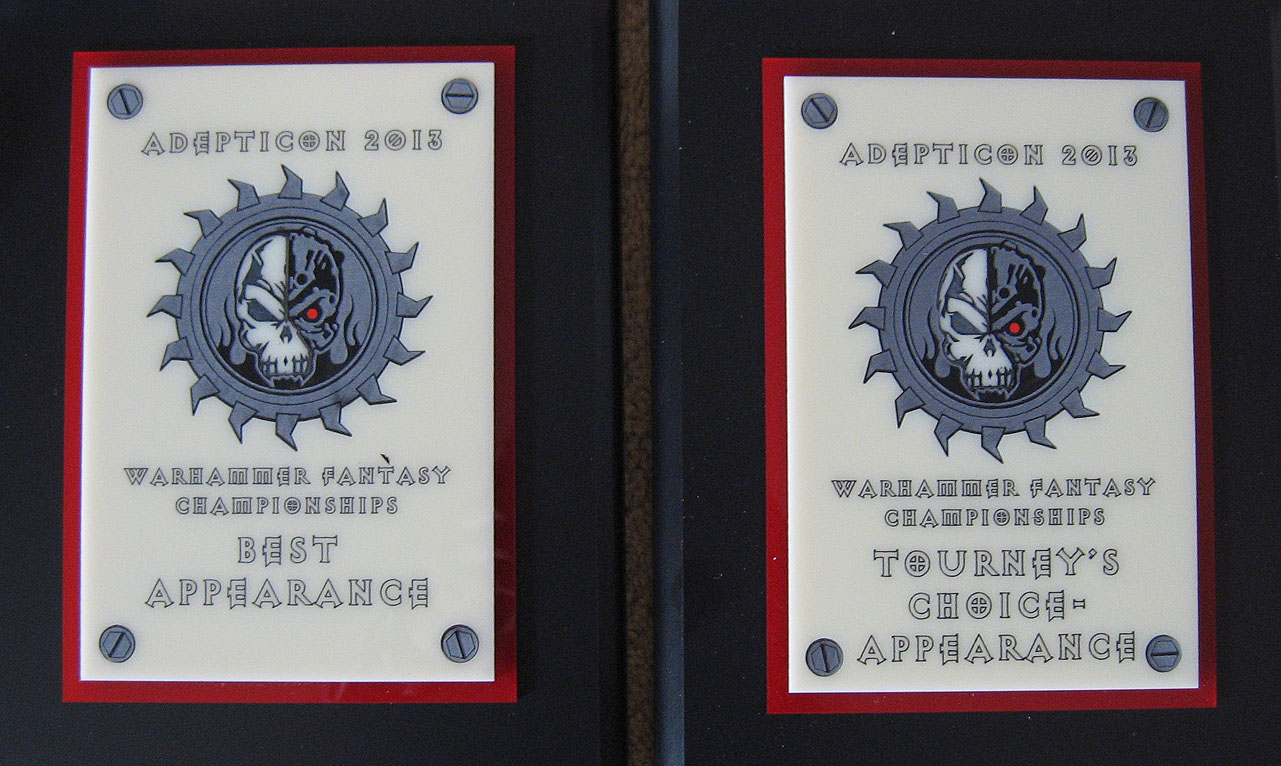 Posted by wappellious at 7:40 PM 2 comments:

The results are in! 40k tournament news... 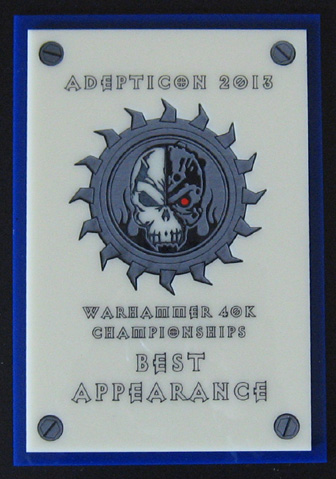 Now for the news on the painting side of things.  Asharah's Rage was able to secure two very cool awards, the first of which was Best Appearance!  This is always a difficult thing to accomplish when there are over 250 armies in the room competing against you. :-)

As you can see, Adepticon does not skimp on prize support!  Yes, that is a complete set of Badger airbrush paints.  The Sanguinary Guard will go quite nicely with my Knights of the Broken Blade splinter chapter, which is the foil to the Dark Eldar army.  Yea! 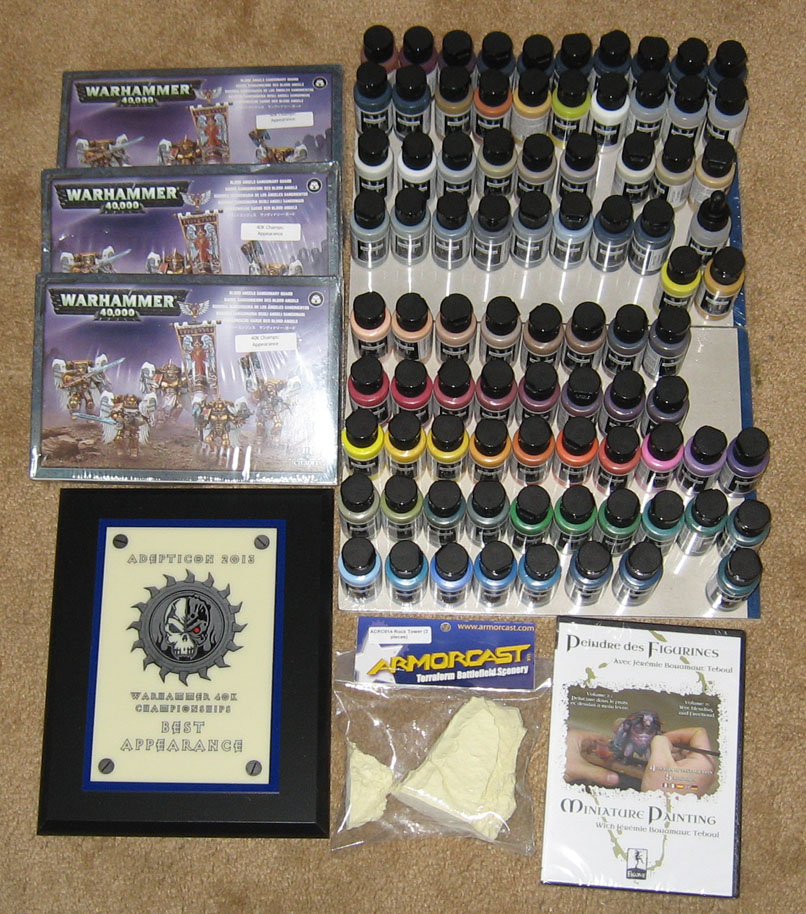 Then we have the second award, which was Player's Choice.  I will say again, when you have that many painted armies on very ingenious display boards, getting this means a lot.  Last year was a tie, so every vote mattered!  Many thanks to everyone who did choose the Dark Eldar.  It is much appreciated.  There is far more meaning to these kinds of awards for me, since painting armies is what I am all about.

Yes, single minis are fun as well, but to make an entire army out of figures painted the way I would do a single figure is how I challenge myself. :-) 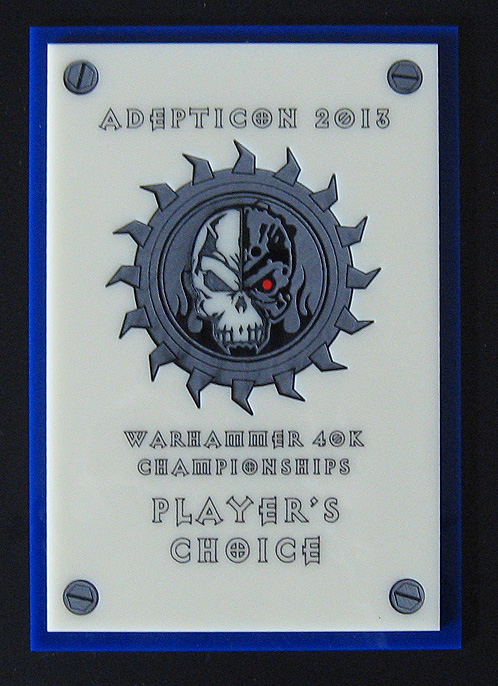 Once again, hefty prize support.  More stuff for the Knights of the Broken Blade!

Thanks to all the folks who make events like this happen.  Tons of volunteer hours, and so on... 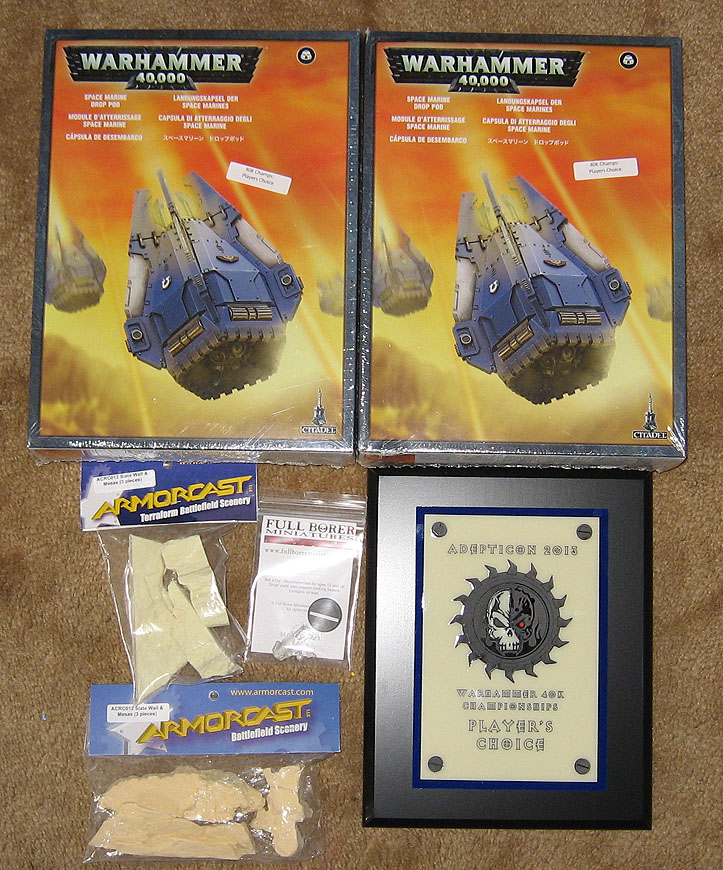 Letters from the Front... 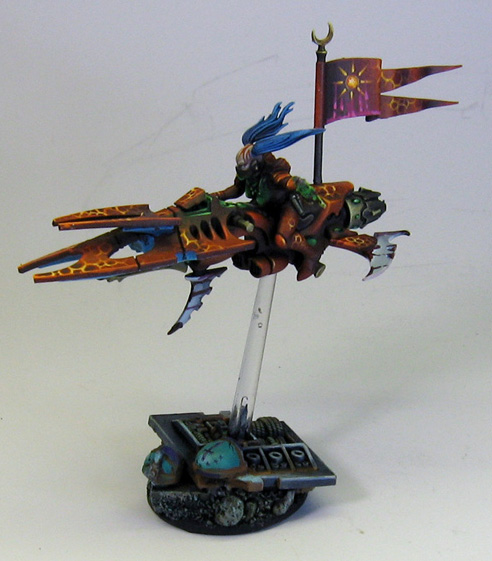 Since the next few posts will be focused on the painting side of Adepticon, I realized that I should have a brief mention of the gaming side of things :-) 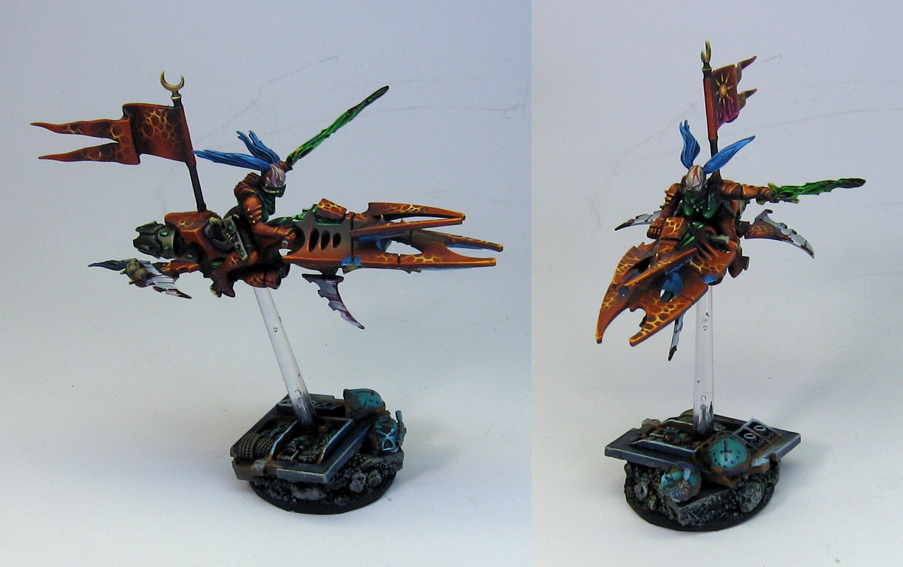 The 40k tourney went very much as expected.  Lots of flyers, no cover, remove figures as needed, rinse and repeat.  I did manage to achieve one max point victory for Asharah, however! :-)  Of the 4 games, 3 were against Orks (including the first two).  Now that I think of it, this was quite unexpected! 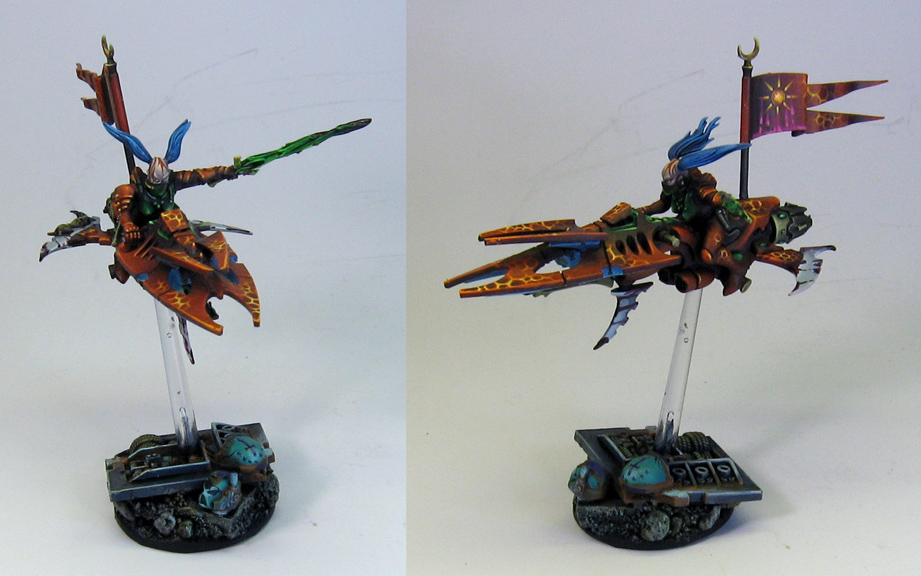 On the Fantasy side of things, the will of the Tzeentch God was done, as the Tomb Cities were raided, and great hauls of tainted artifacts were taken back to the old world.  They shall suffer a fate truly worse than death as the "gifts" of the Tzeentch God display themselves. :-)

I suppose there was one surprise here as well, with the Tomb Kings getting a victorious slaughter against some particularly greedy ogres...

Looking ahead, it is extremely unlikely that I will be able to do either tourney in 2014.  I really want to do the LOTR tournament next year, and there will be the inevitable time slot conflicts.

Also, the armies I used this year were 2 year projects.  Even if I started a new one today, the 2 year plan dictates 2015.

For 40k, the most likely new project would be Imperial Guard.  I would love to create an IG army using the upcoming Raging Heroes Toughest Girls of the Galaxy!  If I need vehicles, I will have all kinds of fun building them from scratch.  We shall see what the grim dark future holds there.

WFB is definitely a 2 year endeavor.  As many heard me explain at Adepticon, I want to do a Bretonnian army that has been corrupted by all the artifacts which they have brought back from the questing they have been doing for generations in the kingdom of Pseusenes.

Making this come to life will involve a tremendous amount of conversion and scratch building, and scary amounts of freehand as well.  Each and every member of the army gets it's own twisted heraldry, and so on.  Lots of extra arms, feathers, you name it.

The other benefit of the 2 year plan would be the probable end of 8th edition, which has been a gigantic turn off for me from day one.  The only appeal that it had was the terrain concepts, and those are very difficult to handle for any tournament, if not impossible.  I had a few chats with folks in the room about this topic.  One can only hope! ;-)

I discussed the Brets many times over the last few days, pondering the notion that they might get a new book between now and 2015.  They have needed one for years as it is, so there could be a perfect storm of new stuff coming!  Perhaps there will be some nifty critters like those new High Elf birdies...

If possible, I would also like to make some armies that are better suited to the game itself, and make fewer sacrifices to fluff, etc.  While it is relaxing to not rush through games to get them done in time, having 2 hours left to play after getting wiped clean off the table loses its appeal rather quickly.  I did have lots of extra time to chat as a result, but when the total time spent playing games is less than what I spent on a typical skeleton archer or jetbike...

I think I was able to get a few in game pictures, so I will see what I can put together for you.  Again, the games did not last very long, and most of the images would simply be time lapse photography of me removing minis from the table :-)

The fun pictures are coming tomorrow, however!  Stay tuned!