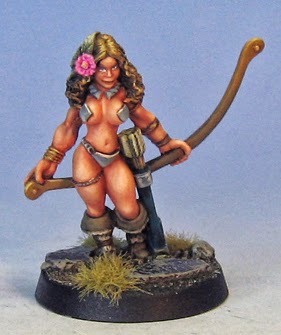 Here's another Celtos figure, this time one of the Gaels.  I am pretty sure this was a hero character.
She was sculpted by Kev White, as was most of the Celtos line.

His fantastic sculpts became Hasslefree Minis, which are just as spectacular.  As always, very clean lines, and not overloaded with 'extras', leaving that blank canvas for your own designs.  This time around, it was very simple, but the Gaels I am working on for the Slaine campaign have loads of woad!

I think I have a gallery or two of Hasslefree figures, which are just that!  I also have more galleries of Celtos figures, including a few big dioramas. 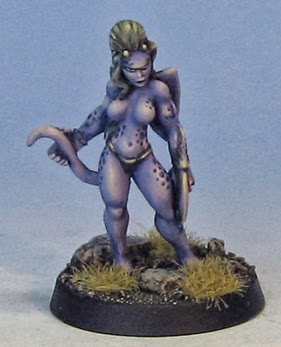 Well, if you wanted to know where the idea for the Purple Flesh Tone video came from, here it is!
This is a Celtos figure, a Fomorian Siren to be exact.  You can see the similarities :-)

This one was painted years ago.  Seeing the Raging Heroes Mantis Warriors, the temptation was too great to attempt this color on them as well!  Obviously there are a lot of differences between the two types, but that's where the fun comes in.