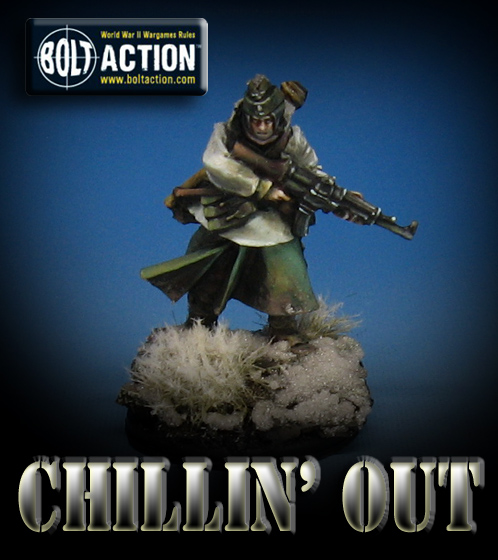 The deep freeze outside the front door moves inside with another winter German infantry figure from Bolt Action.  These guys are extremely interesting to paint, and a fun change from the large amount of early war Heer infantry.

The usual method of Shaded Basecoat and glazing was used, but with a slight twist... I had to be sure that I set up effective zones for the placement of the snow effects.  This meant setting up some darker areas, obviously, but also a few places where the color was warmer or cooler.

If I wanted to get some contrast between the snow and the figure, but not have too extreme of a difference in the light & dark contrast, I could make the clothes a warmer color, thus presenting a contrast in "temperature" to the cooler, more neutral snow.

I am also attempting to apply this methodology to applying snow on vehicles.  These guys are a bit simpler to take on first!  Since I have spent a lot of time over the years walking around in large and small snowstorms alike, I have tried to mimick what I have seen on my own clothes.

It's remarkable just how much snow can accumulate on a person in a few minutes!  Ironically, the better insulated you are, the more that snow will pile up.  That principle is represented here by the snow piled up on his pack, hat, and other surfaces facing the sky.

The outside temperature and the consistency of that falling snow will affect the sticking power of that snow, so I am trying to determine in my mind what those conditions are for the entire army.  Is it around 25-30 degrees, or is it a much colder 5-15 dergree snow.  Those are quite different!

I am constantly amazed at how the lightest of snowfall... just a fraction of an inch, can turn the entire city white if it is cold enough.

Stay tuned for much more on these winter armies!  Soviets and even Americans await....

Posted by wappellious at 12:30 PM No comments: