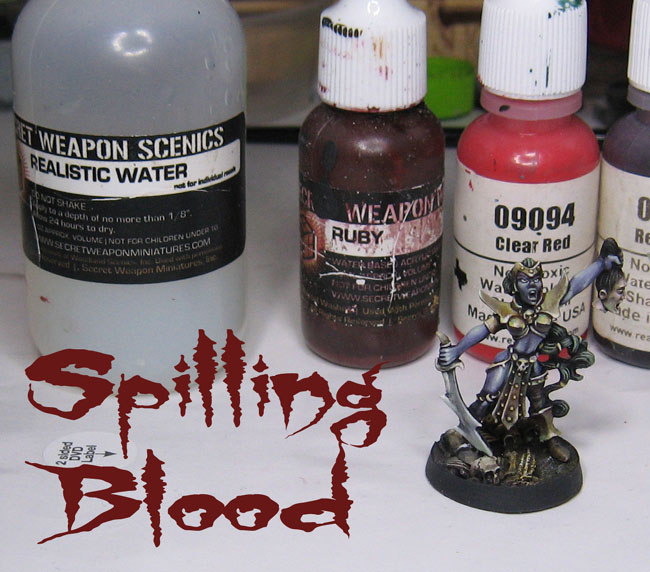 I've been waiting for quite a while to put a figure on top of one of the Secret Weapon skull bases!  Finally I had my chance.

The idea was to fill in the 'open' base areas with pools of blood, as they were inset.

I gathered a few of the usual suspects, including the Realistic water, red liner, and Ruby wash.

The colors don't have to be that exact set... it only has to be close.

Most important is to have something dark and transparent to mix in with the Realistic Water. 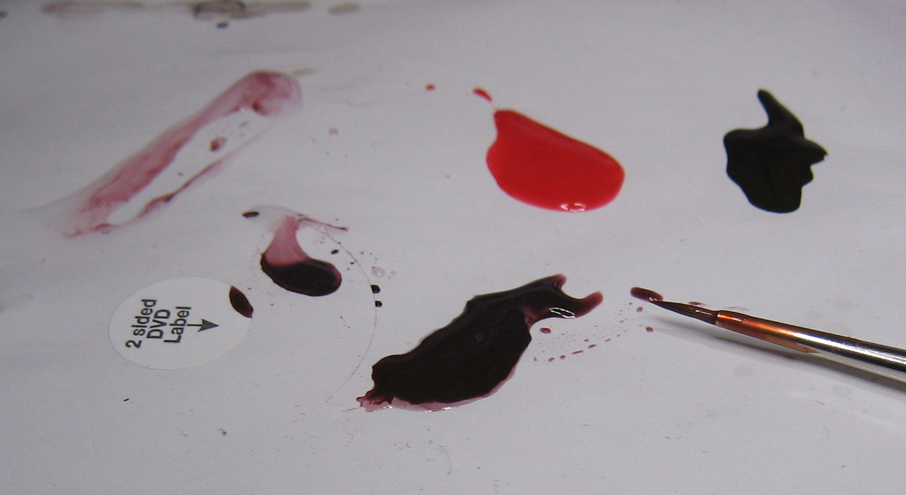 The Clear Red was added to make a lighter version of the blood color, which could be smeared or spread along the sword blade. 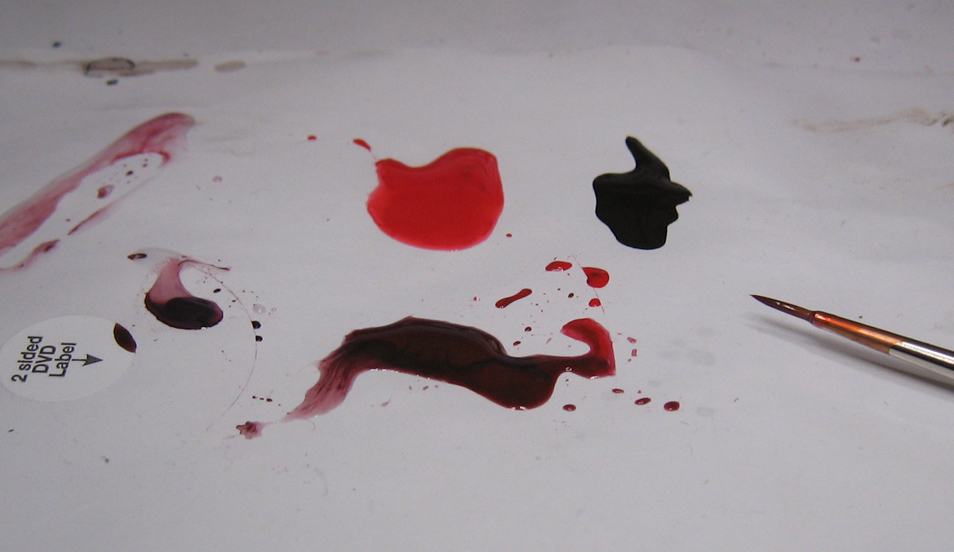 This view sort of gives you that sense of transparency. 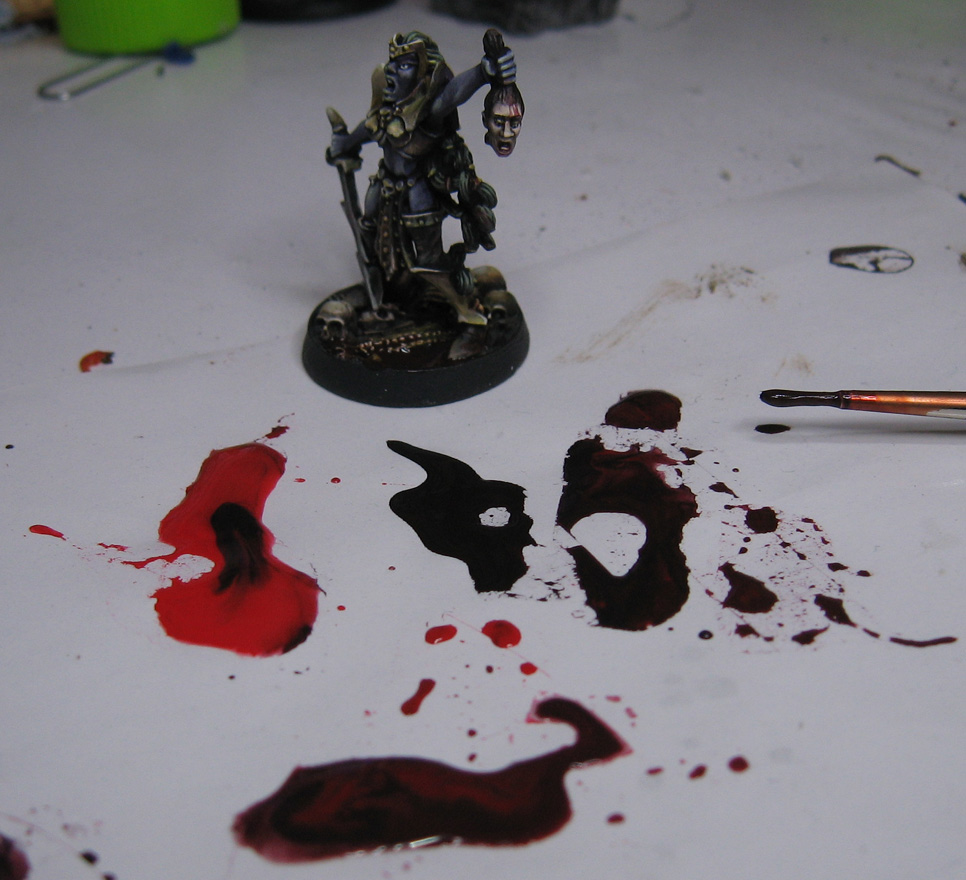 A few layers of this mix filled in those depressions around the skulls. 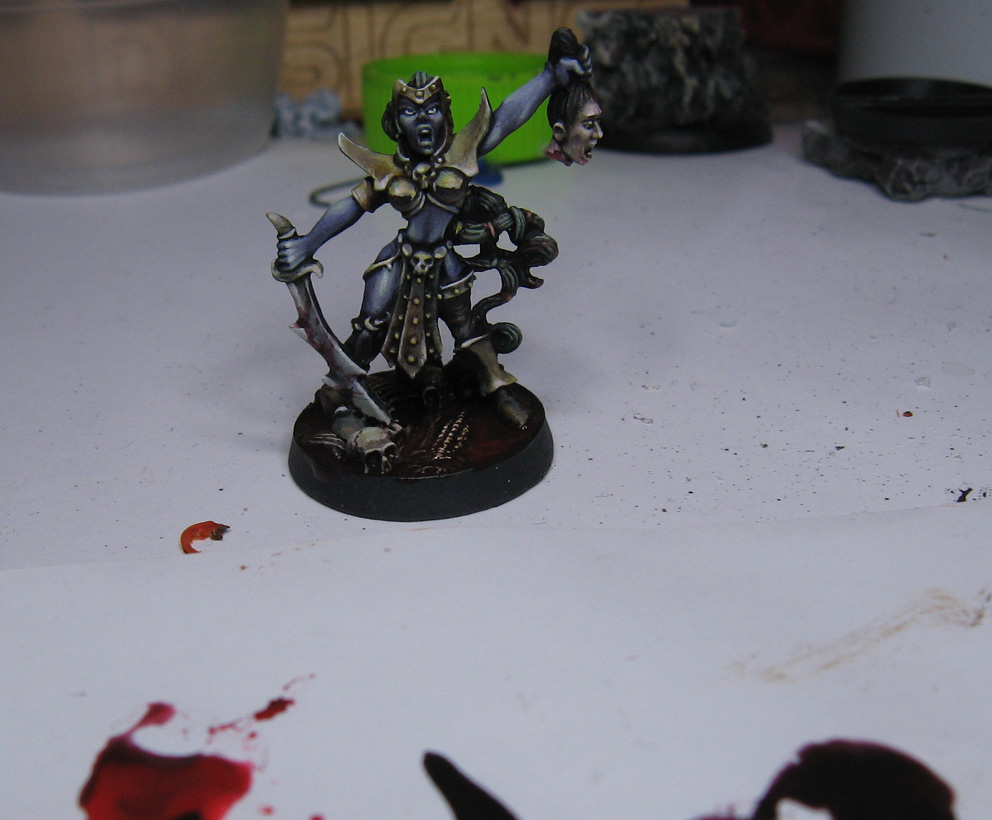 It really was the prefect miniature, as both the sword and severed head would be the perfect "source" for that pool of blood!

I created an entire 100 minute long video as part of my kickstarter series called Bloody Mess. 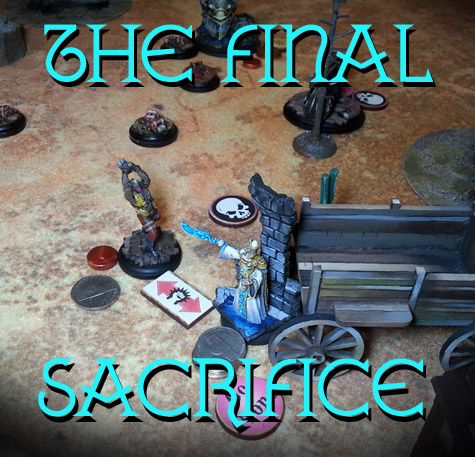 The third and final Episode in our saga finds the Enlightened surprising the Holy Order, emerging from the woods right on top of the ambush positions which they had chosen.

This caused a huge change in the plans of the Order, as they had to drop the containers of RJ-1027 to do battle with this new threat. 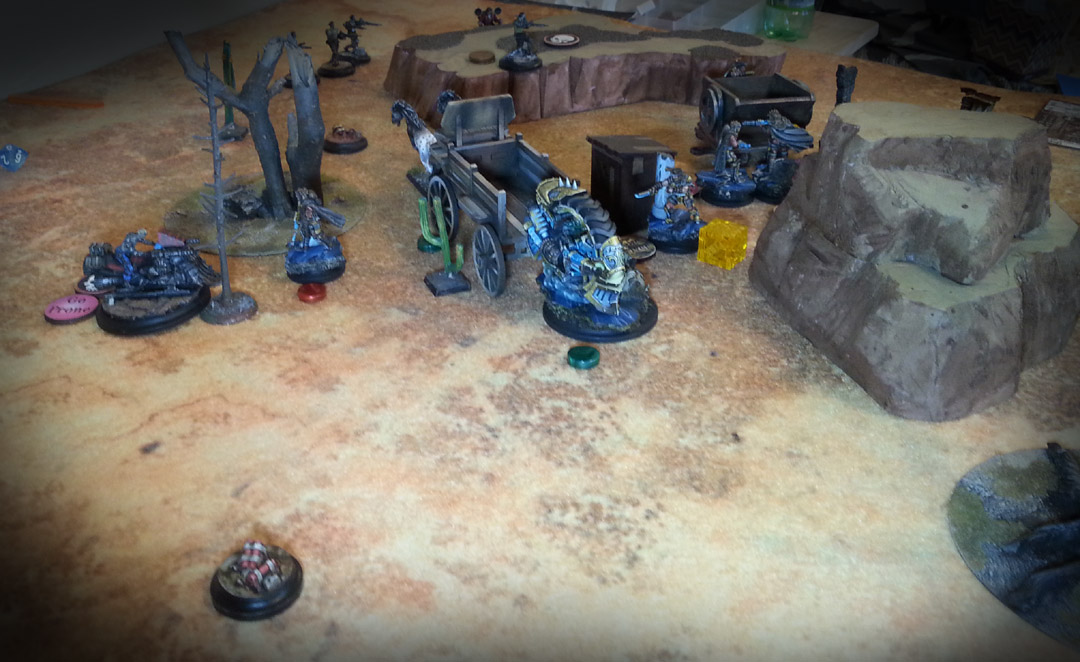 Additional Spica left their hiding places around the mine entrance to attack the Iron Horse.  It could not be allowed to focus its gatling guns at such close range into the command staff! 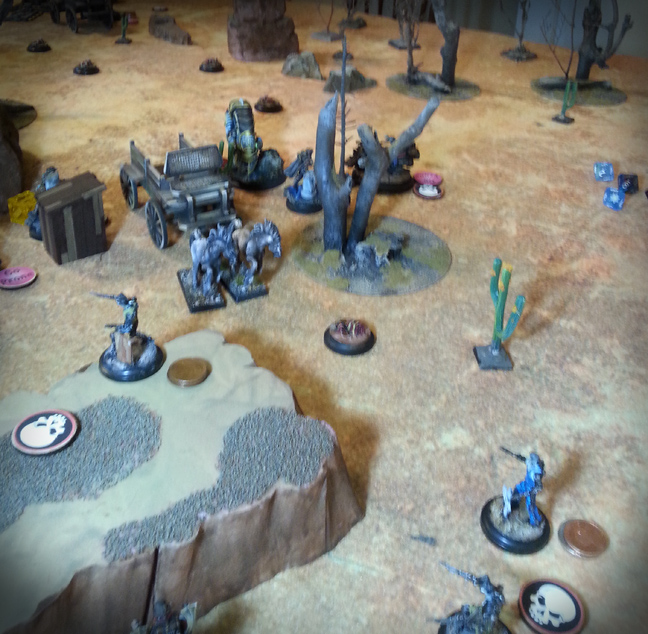 Using the benefits provided by Sircan Abner, Altcap Oron, and Altcap Siraj, the Spica tore through the Iron Horse, and the hired hands brought in by young Edison.

The Spirit Aim of the Spica proved to be deadly, and Altcap Oron's inspirational leadership gave them the extra shots required to take down the hideous 'inventions'.

"Old Man" Abner dealt the final blow to the aspiring inventor himself.  As Edison fell, the mindless abominations seemed to slow significantly... 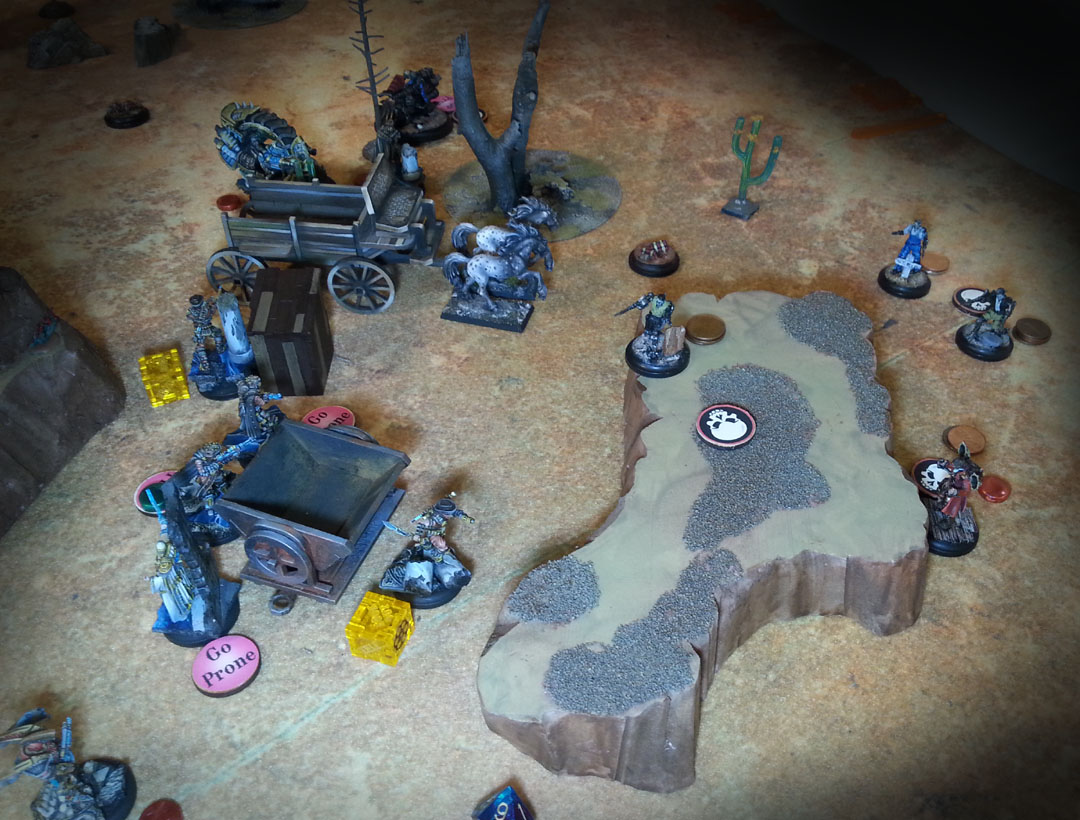 Not to be outdone in heroism, Altcap Siraj charged right into the mass of Enlightened troops and characters at the edge of town!  While he could not keep pace with the speeding Wells Fargo Wagon, he was able to kill the burning K-9.

He followed this action by engaging the lone hired hand who was now attempting to drag yet another container of RJ-1027 away. 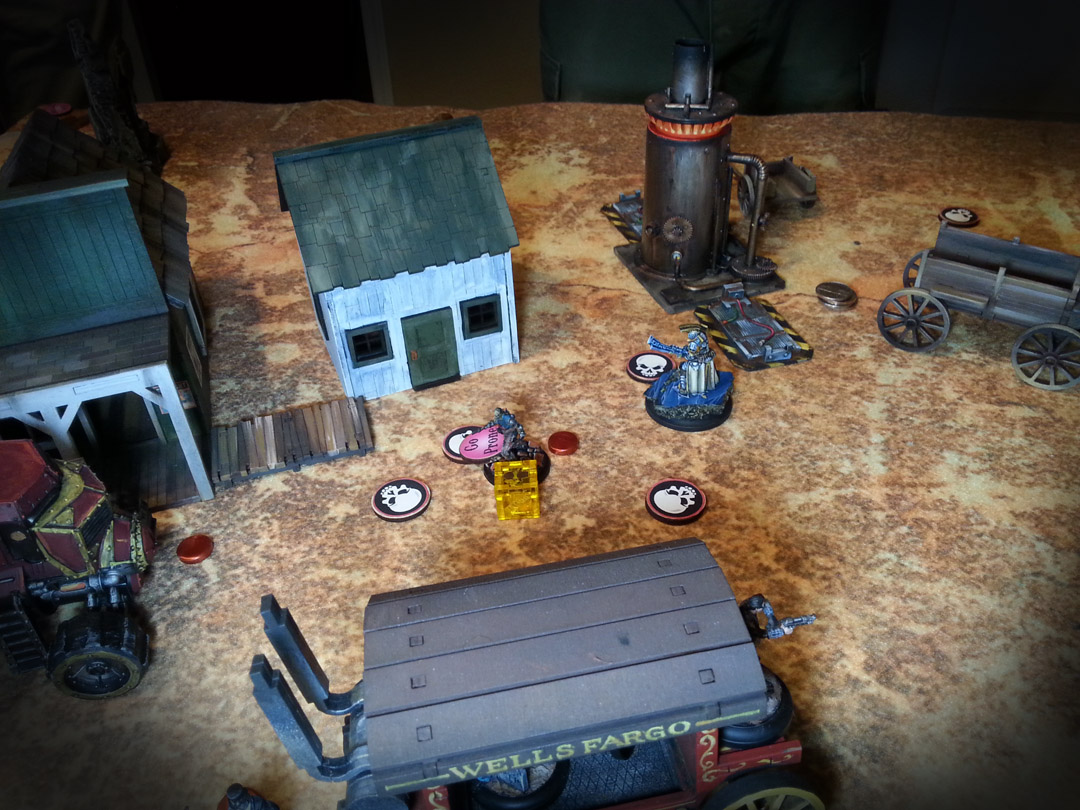 Fortunately for the Order, most of the Enlightened forces from the woods had been destroyed, and two Spica were able to carry away two containers of unstable chemicals.

One of the brave Spica managed to do this with his dying breath as he fell victim to the poison shot from a Kaufmann twin. 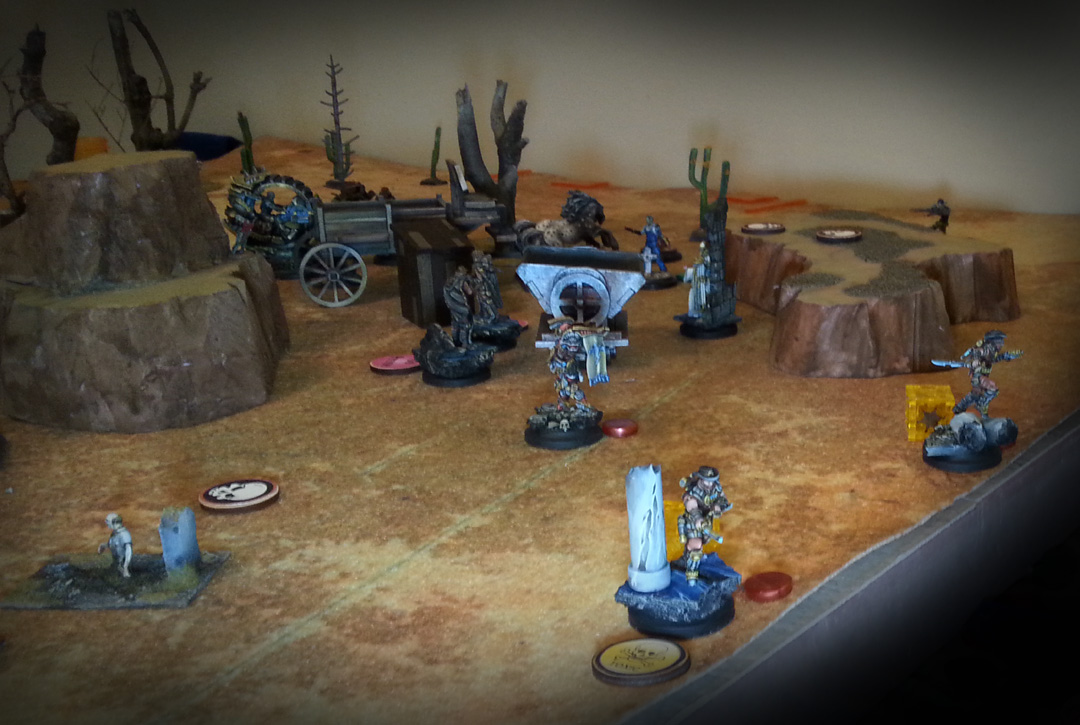 Once the new 'crew' of the Wells Fargo wagon noticed the partially concealed piles of dynamite at various intervals in the road (the reason why the Order chose an abandoned mine as their position!), they started to take more desperate actions themselves.

Marcus Cunningham jumped out of the wagon and assaulted the Tumbler, which had been raining fire onto the IronHide and Carpathian. 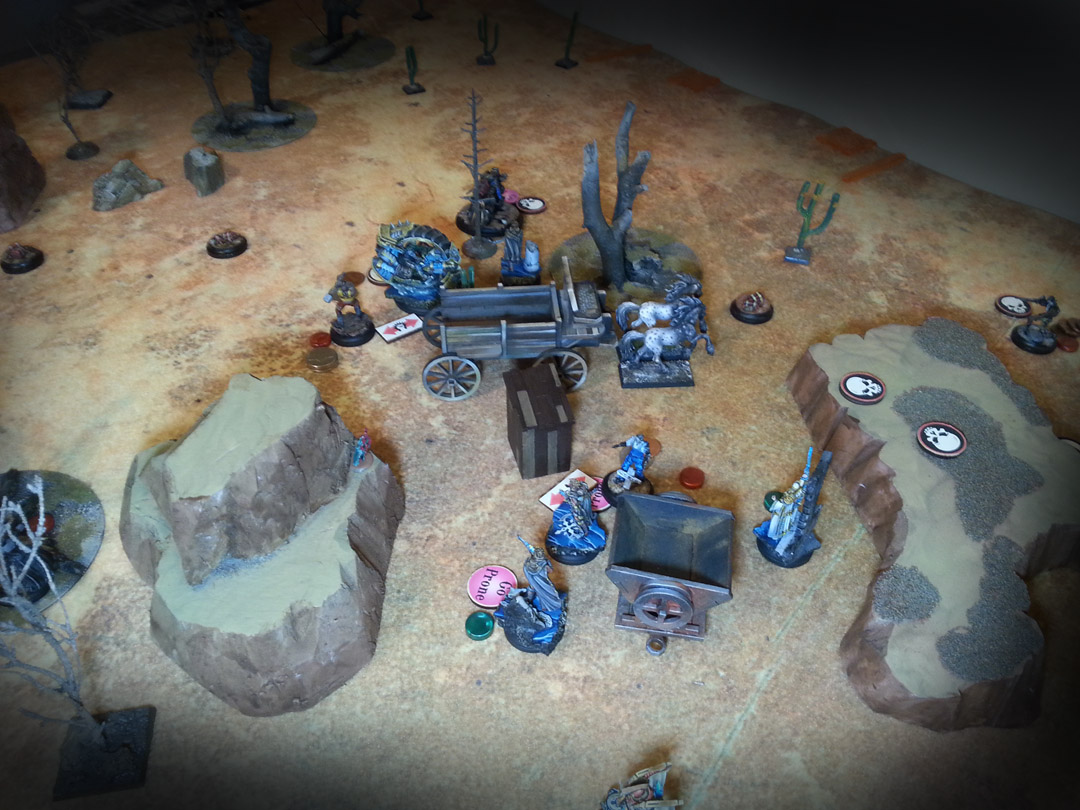 By a miracle, the Tumbler survived his attack, and managed to escape by the barest of margins.  Knowing that he was near death himself, the driver placed the last of his mines as he rode away.

It was now up to "Old Man" Abner himself to take on the raging mercenary.  He was repeatedly knocked to the ground by the hammer of Marcus, but despite his great age, he had the action points to get back up and deal damage to Cunningham as well!

Unfortunately, the few remaining Spica were either too far away (or otherwise engaged in combat themselves) to assist their leader. 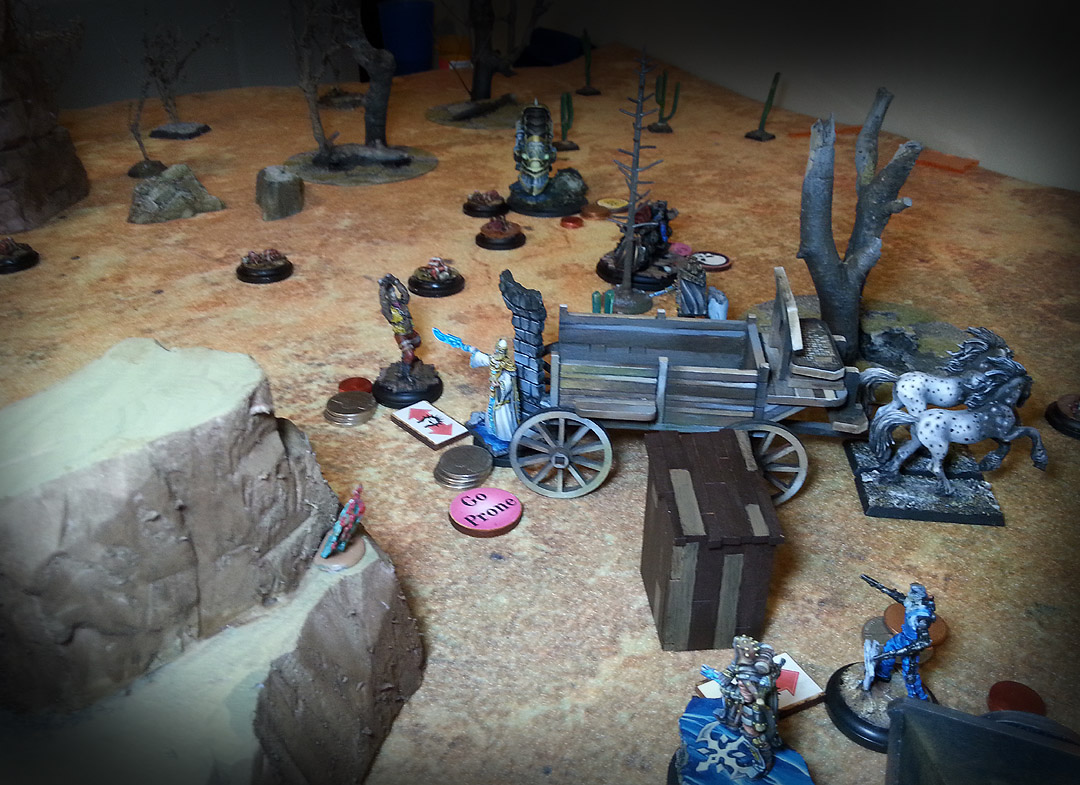 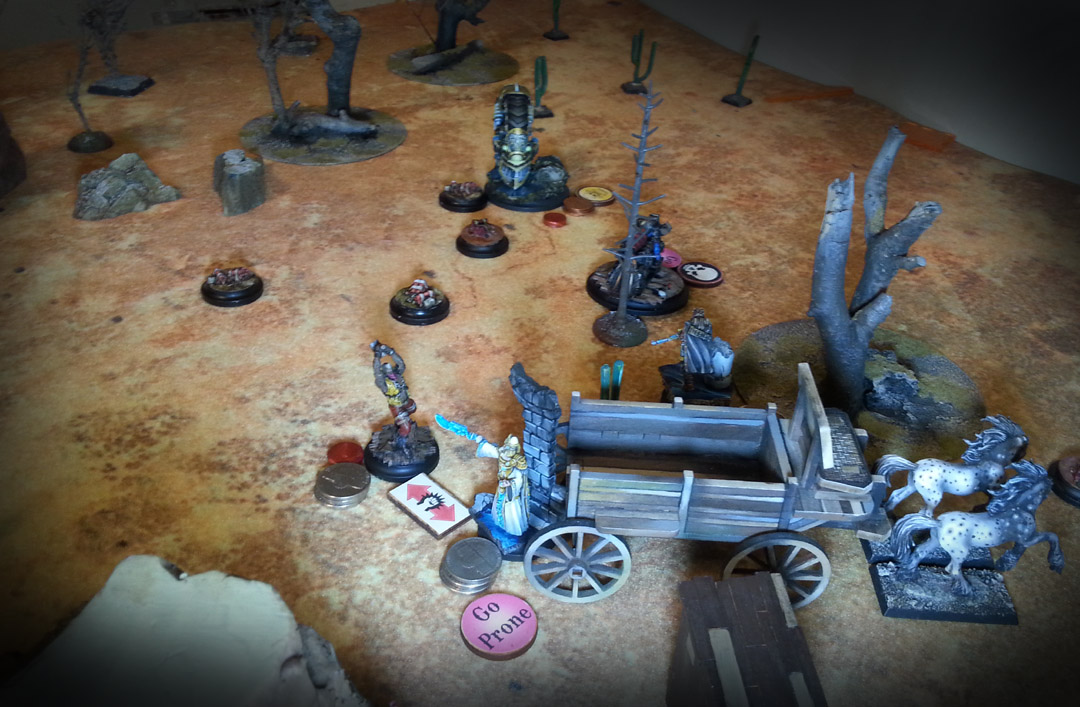 Desperate to come to the aid of their Sircan, two Spica killed off the undead creatures with their ritual blades.  The Wells Fargo wagon was also nearing the scene, and soon more Enlightened would take their toll on Abner. 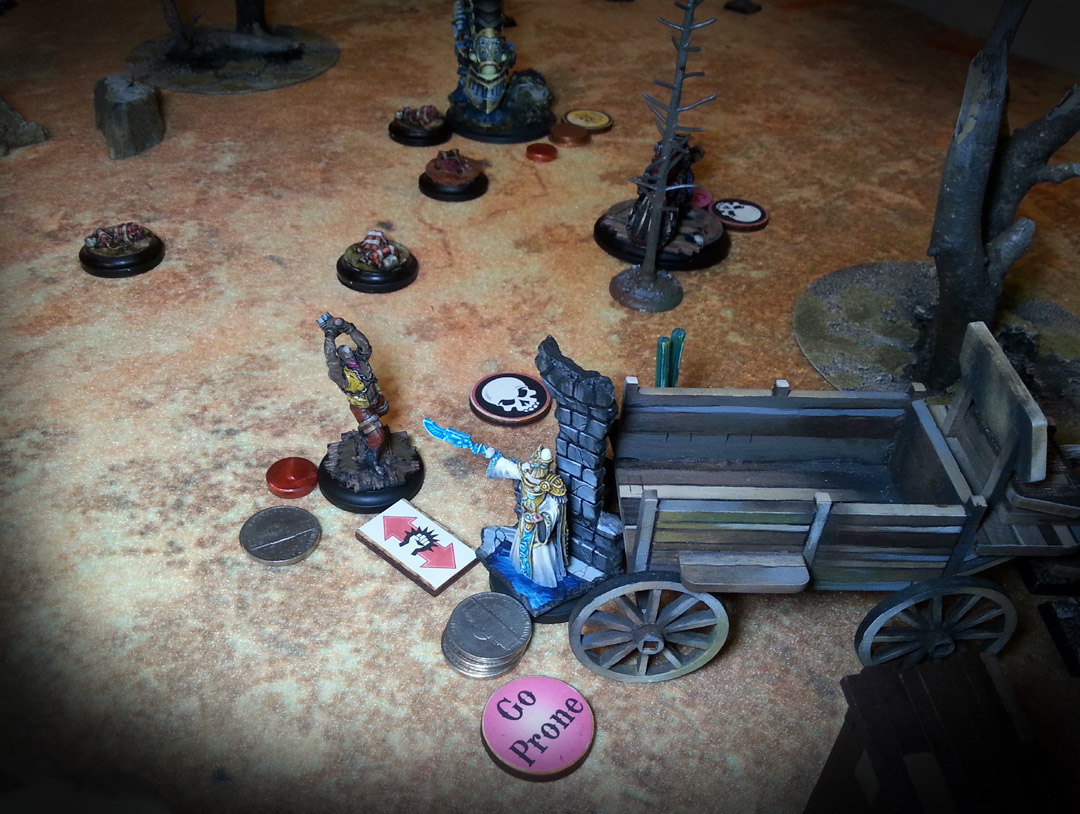 While this bloody combat raged, Altcap Siraj dispatched the last hired hand, and chased Carpathian further into town.  Once satisfied that they no longer posed a threat to the Holy Order fighting to stop the wagon, he dragged one more RJ container away from the blasphemous horde. 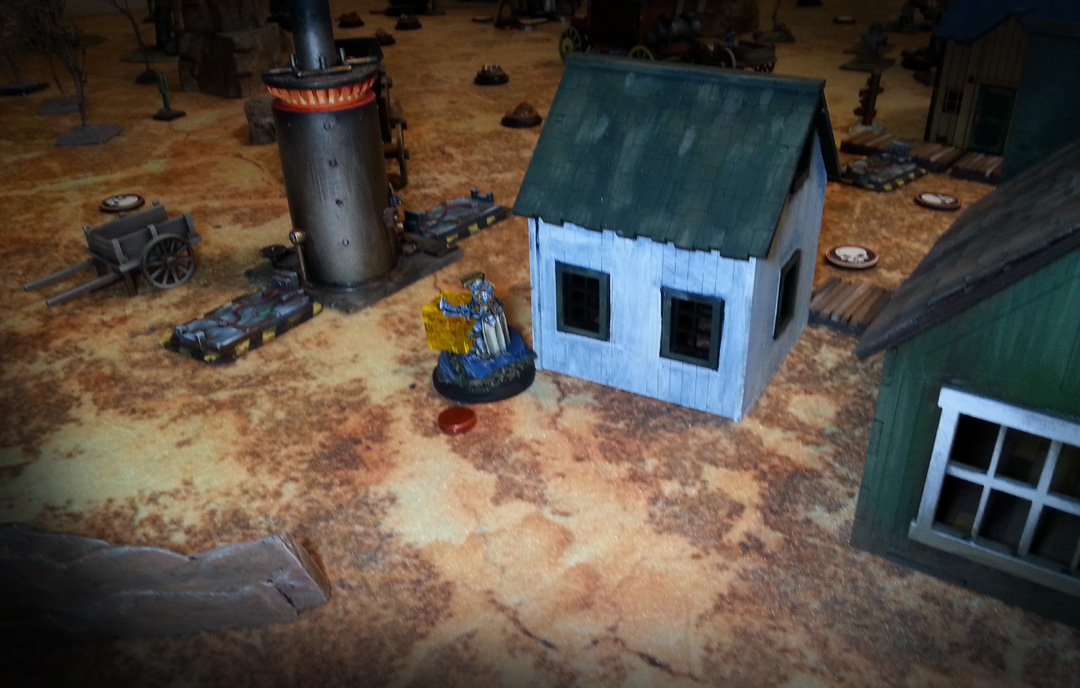 Things began to look very bleak for the Order as the wagon zoomed past the colossal engagement between Marcus and Abner.  Somehow, both were still alive!! 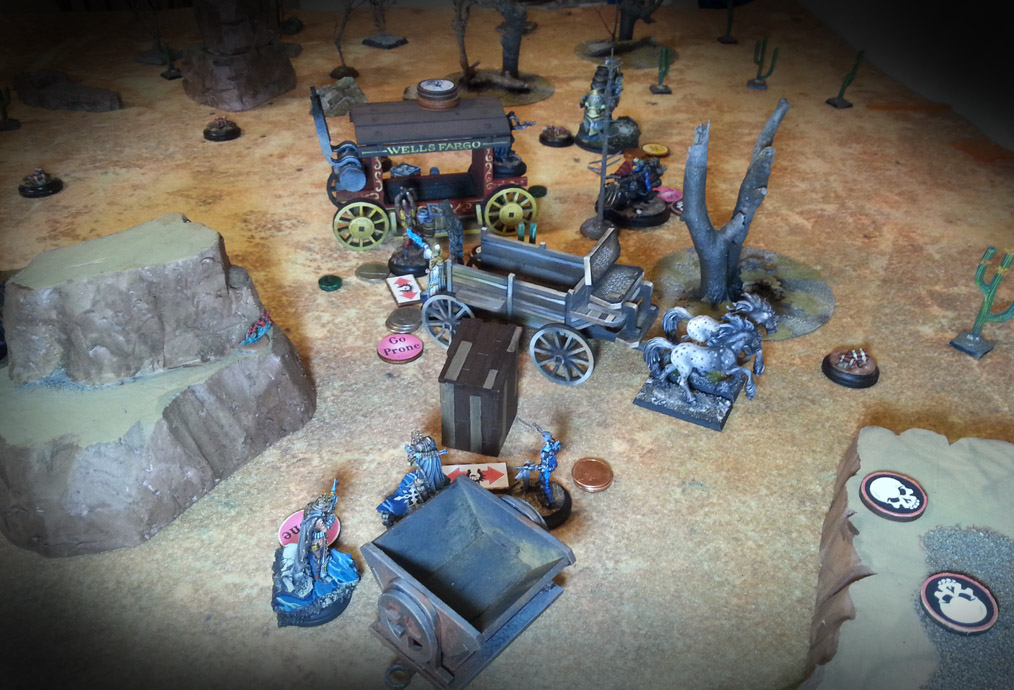 Carpathian could only watch from a distance as the carnage continued.  He attempted to bring back a few of his Creations from "the dead", as they had been taken down in close combat.  This would prove to be even more dangerous to the life of Abner... 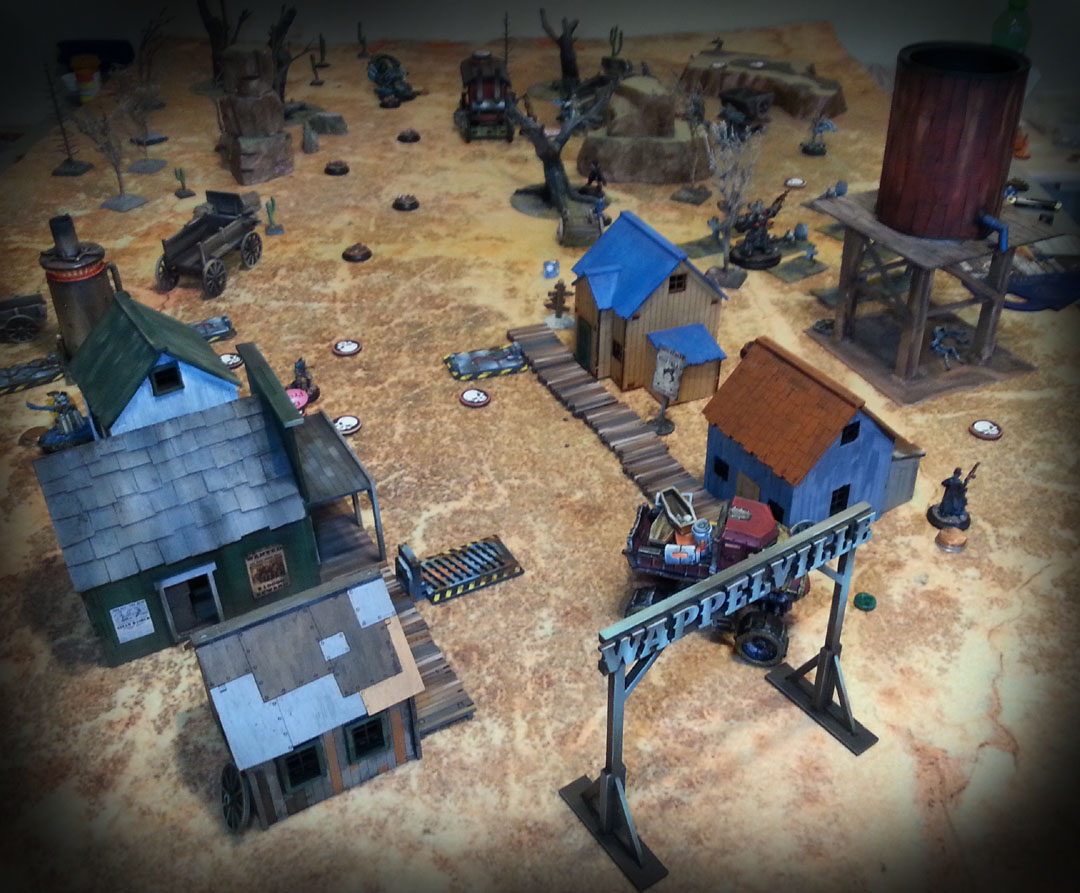 There was a brief moment where it looked as if Abner might be able to finish off Cunningham, landing two blows that clearly should have been lethal.

Somehow the mercenary was able to deftly avoid both hits from Abner's Staff of Light.  Would this spell the end of Abner?  Even more trouble was approaching... 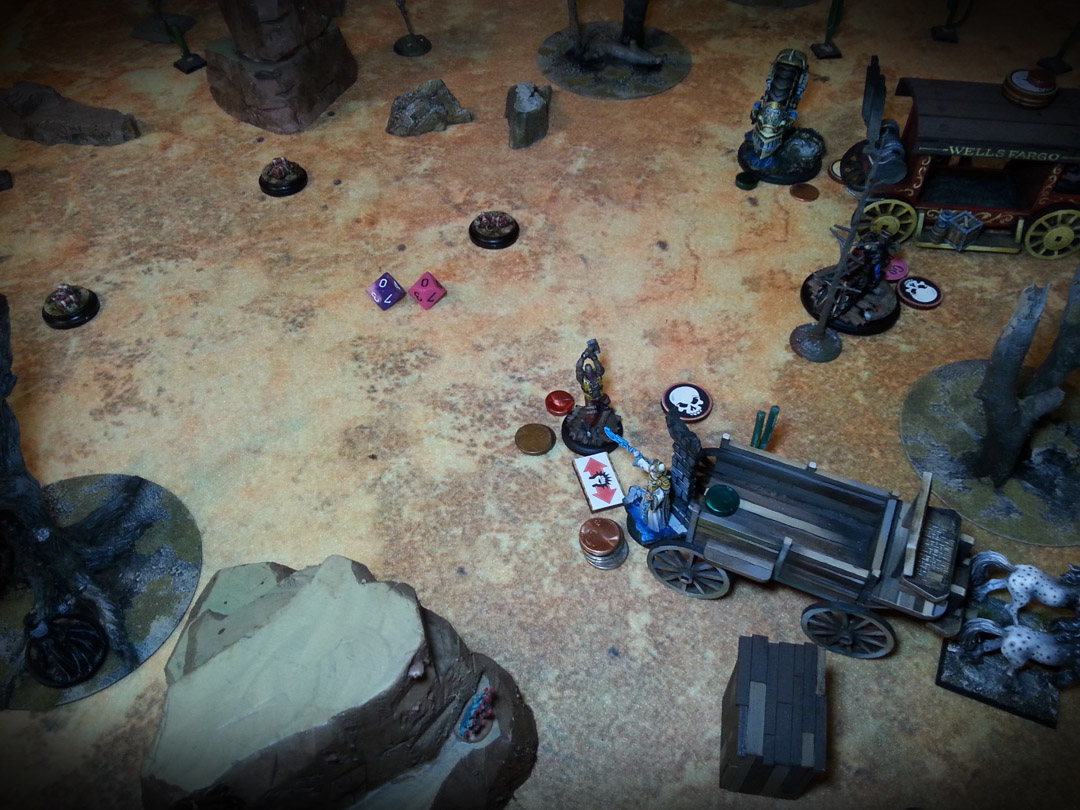 The gigantic Creation 5 now set upon the old man as well, resurrected by Carpathian.  However, the enraged Spica had finally reached the combat, and then threw themselves as this great beast.  It was futile of course, and the Creation killed two Spica.

When all looked lost, the rider of the Tumbler managed one final point blank burst at a Kaufmann brother, who was the driver and lone occupant of the Wells Fargo wagon.

This was the final chance to stop the Enlightened, and his aim was true!  The dastardly Deiter was incinerated where he sat, and the wagon came to a halt.

Carpathian had been thwarted... this time, but he will certainly be back, and most likely with even more horrific inventions!  It seems like more sacrifice will be required from the Holy Order of Man.

They will be ready. 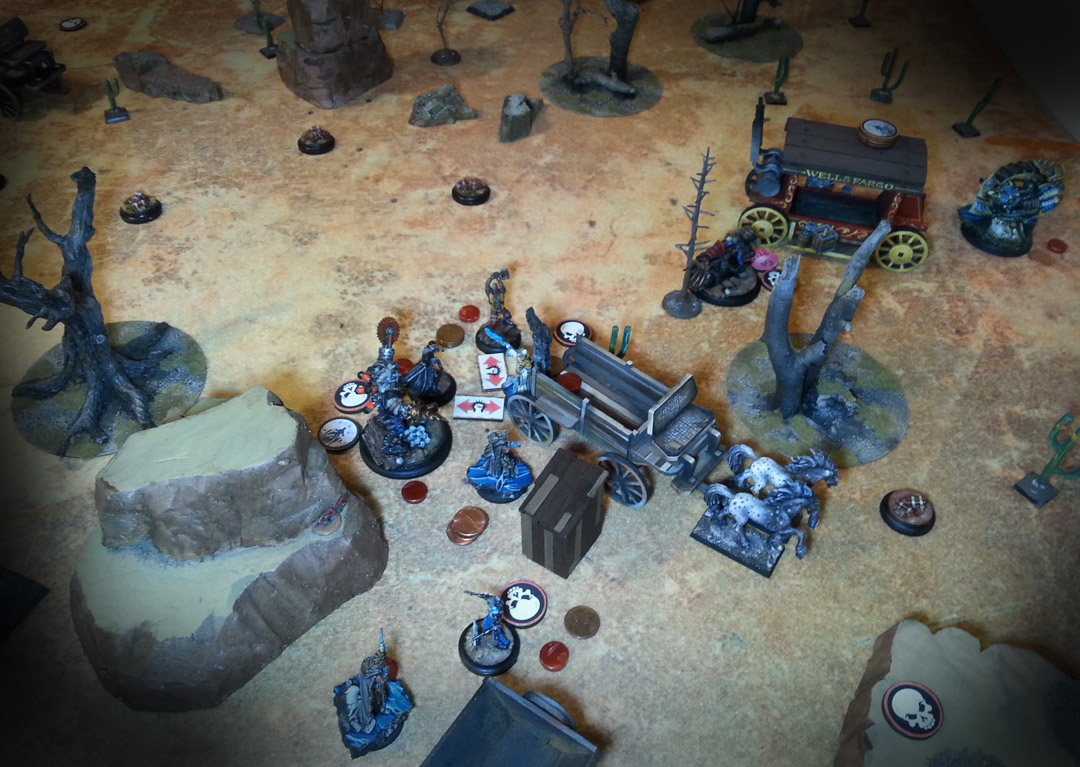 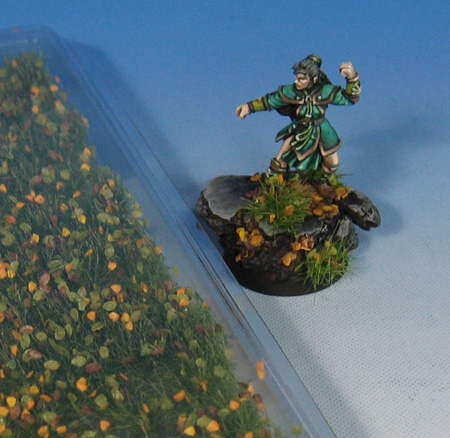 On this Reaper figure, I thought I would test out yet another new foliage that I purchased from Hangar 18.  In fact, it was a combination of the 'new', and the 'old', which is my Mica flake leaf technique that you have seen me employ in the past.

I was hoping to combine these two items on the big Scale 75 elf ranger diorama.  The majority of the 'leaves' will be bulked in with the Vallejo Mica Flake Gel.

This leaf and grass combination will provide the more 3D texture over the top of some of those Mica Flake piles.  It was fairly easy to match the colors.

Here we have the two together.  You can peruse the basing section of the blog to find a number of posts showing the use of the Mica Flake gel. 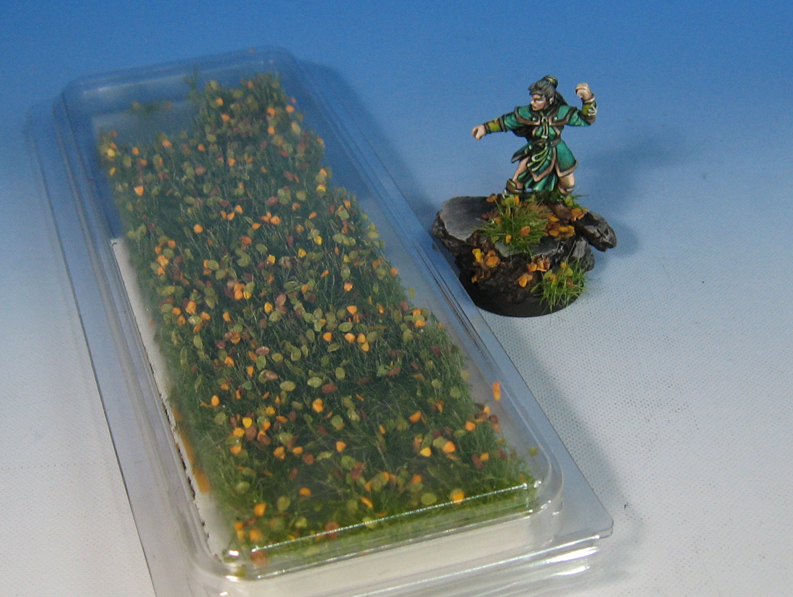