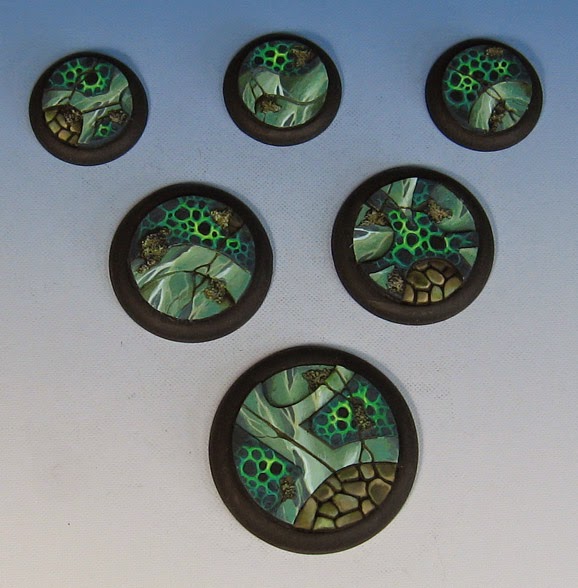 Speaking of Secrets... here's a fantastic base design from Secret Weapon Miniatures!

This is the round lipped Alien Temple series.

Let's get things started with the 50mm bases. 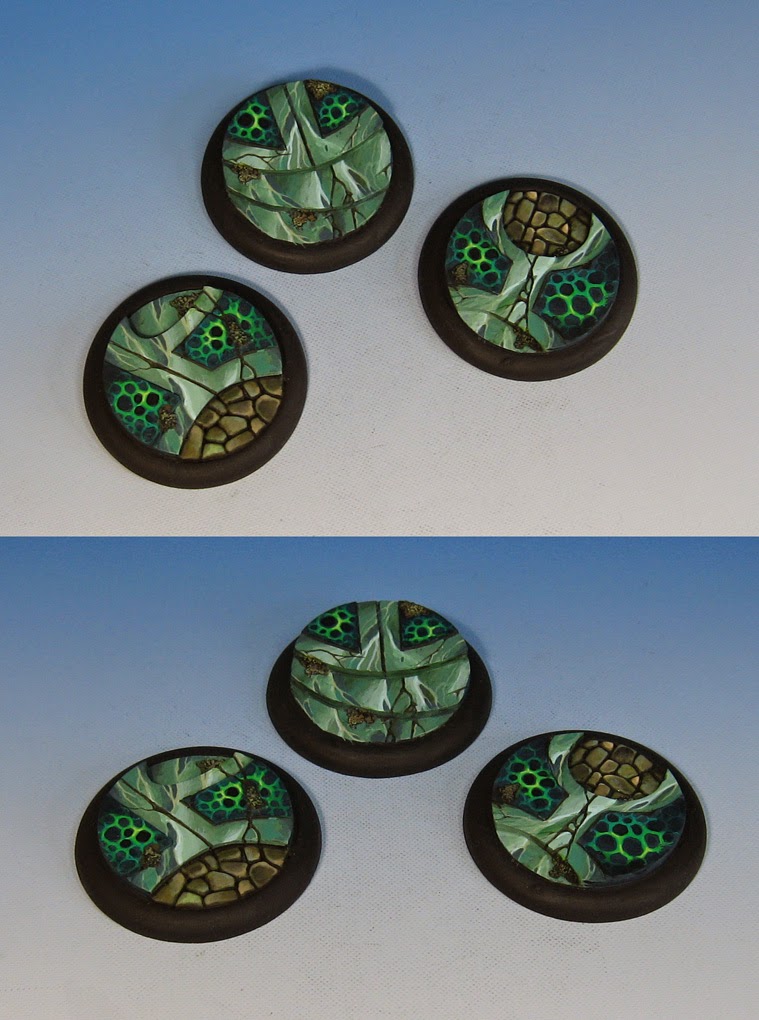 While the largest bases come in a set of three, the 40mm versions come in an ideal pack of five, designed for just about any kind of squad or unit that would require this size. 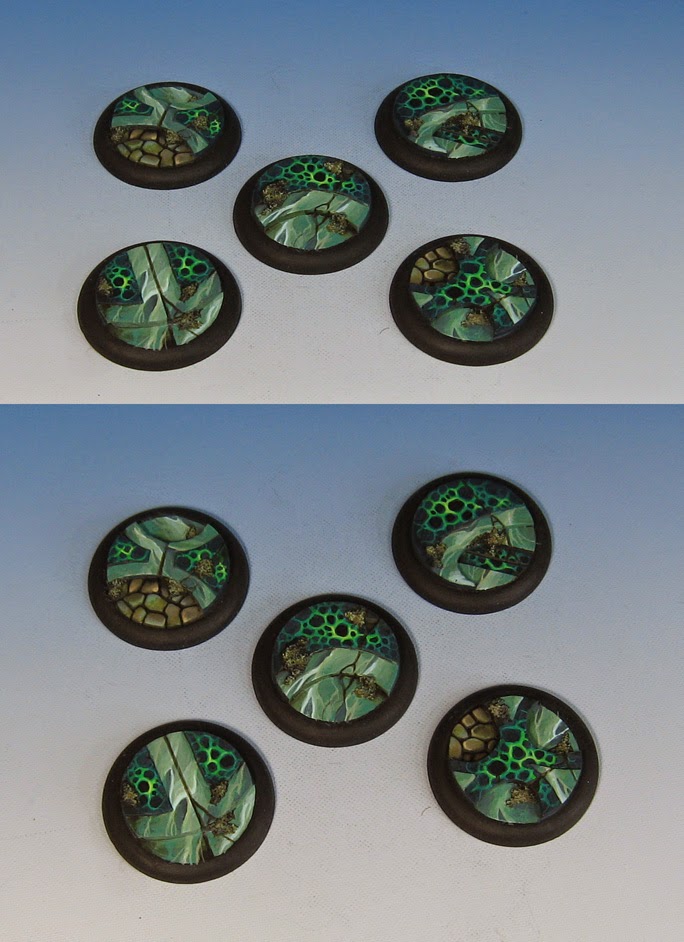 There are also ten 30mm bases.  This is the first batch of five... 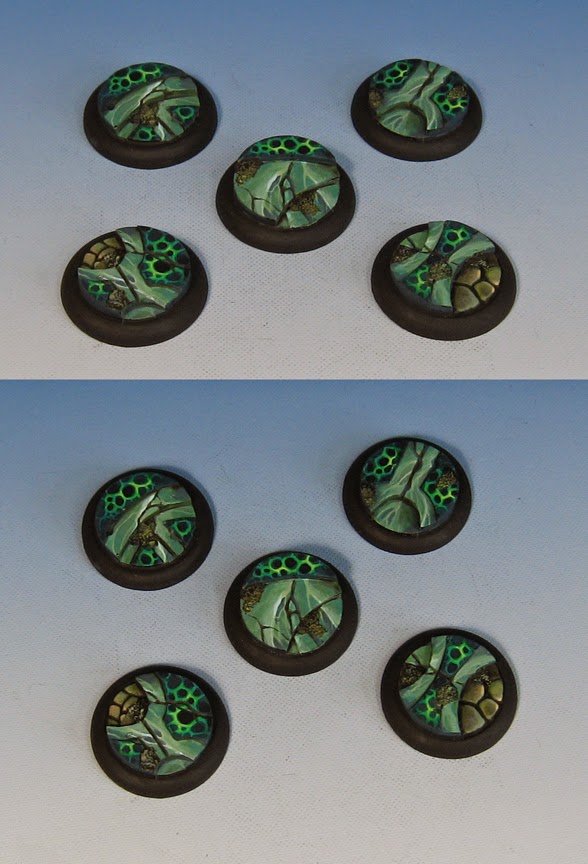 Followed by the rest.  As you can see, each one is unique!  And, Mr. Justin has taken great care to leave you enough space for guys (or gals) to stand on them! 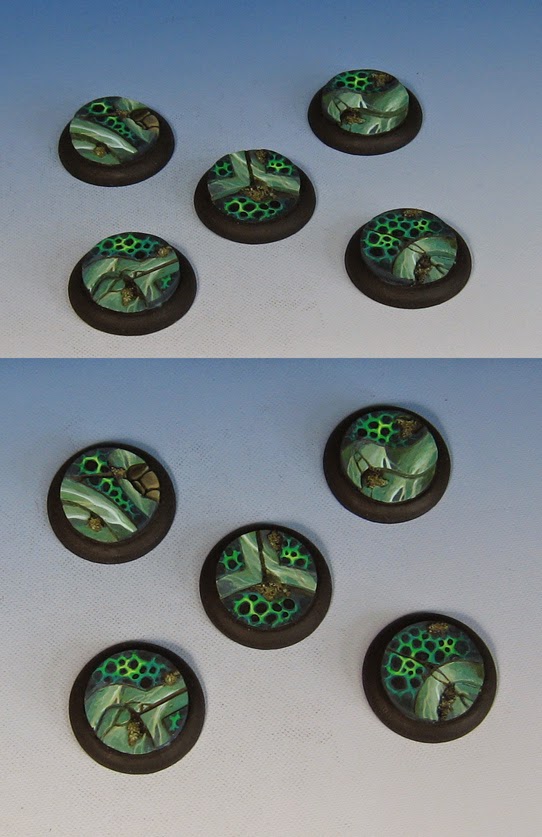 Now for a size comparison of all three types. 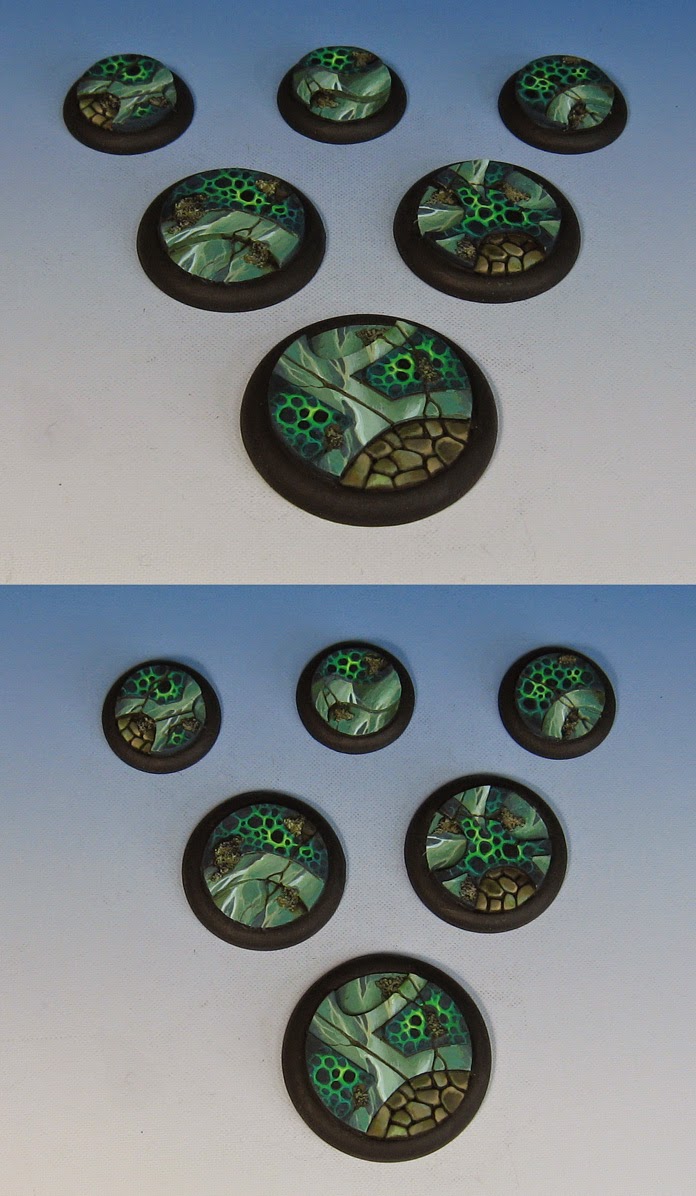 The entire set of Alien Temple.  I couldn't resist doing marble, but also some funky patterns... it's ALIEN after all!

As I have mentioned many times, the bottoms of the bases are always flat, and never belt sanded!  You also don't have to waste many valuable hours of your life washing and scrubbing mould release from the resin.  Excellent!

So, make Mr. Justin happy and go get some!! 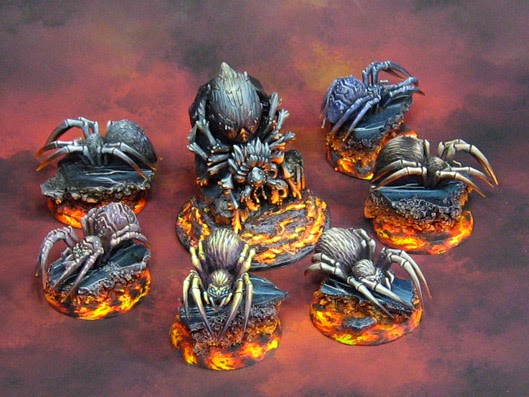 One of the things I am REALLY hoping to do is play some Lord of the Rings at Adepticon.  I am also very eager to try out a new army that I have never played.  It's a combination of spiders and Morgul Knights.

The Spider Queen is a big part of that mix. 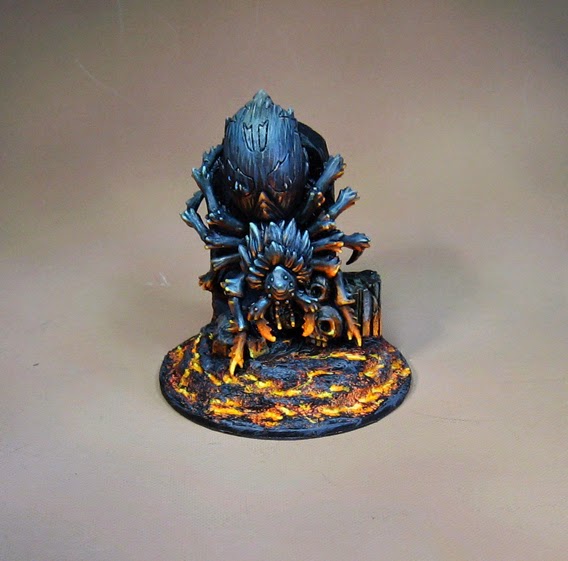 As with my other 'Evil' army, speed is the key.  Horses and spiders crawling and running everywhere! 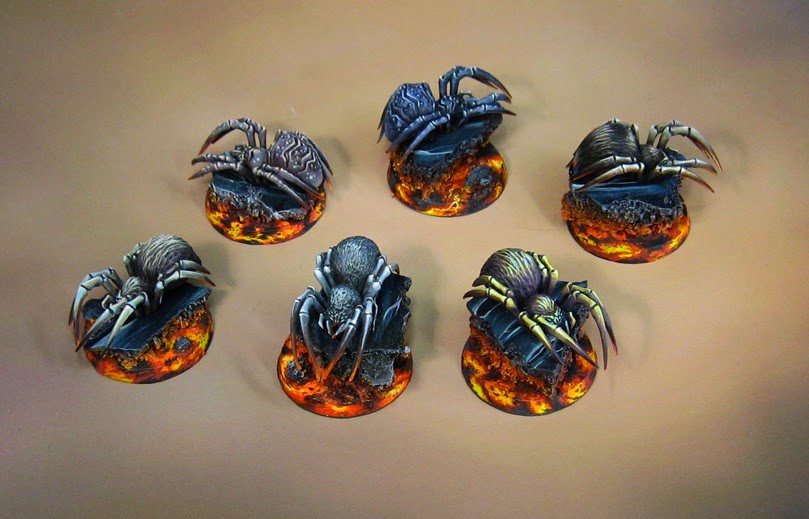 The advantage of the spiders is that they are not slowed down by terrain, so I can keep them hidden in forests to ambush enemy units that are attempting to engage the heavily armored Morgul Knights. 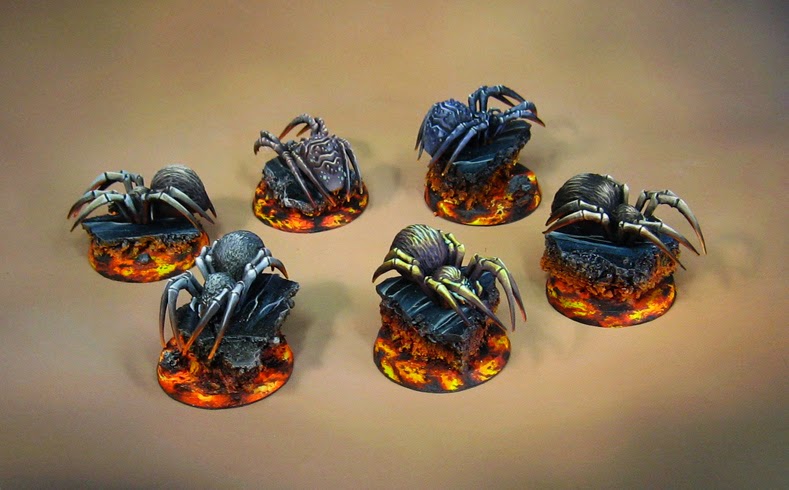 Those Morgul Knights also cause fear, which means that there is a possibility the enemy won't even be able to engage them.  I know this from experience, having fought against them!

The spiders also have multiple wounds, so I can artificially increase my numbers simply by doubling the wounds.  Factor in the horse and rider separation of the mounted Knights, and 20 guys are effectively 20 when it comes to wounds from shooting.

Finally, the Spider Queen has the ability to put out swarms of her young'uns in key situations.  I could toss them out as a screen to prevent enemy heroes from joining existing scrums, or even keep them from using might to move their own units around. 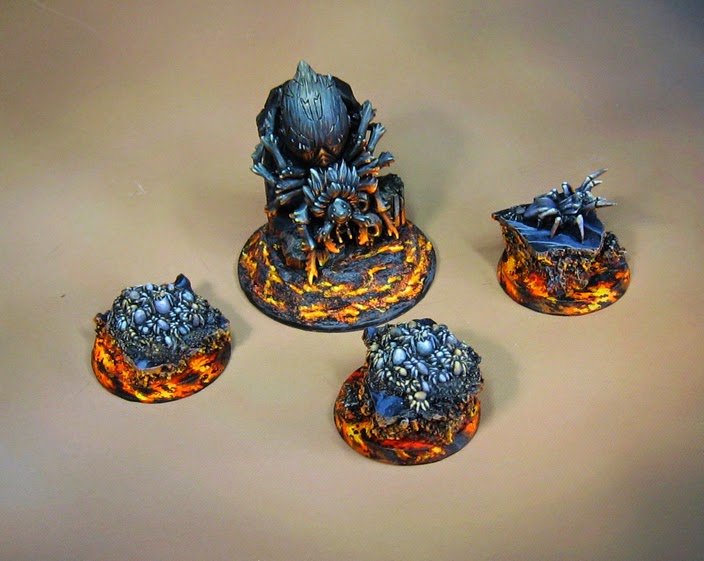 I don't know if this will work or not, but I am certainly eager to try! 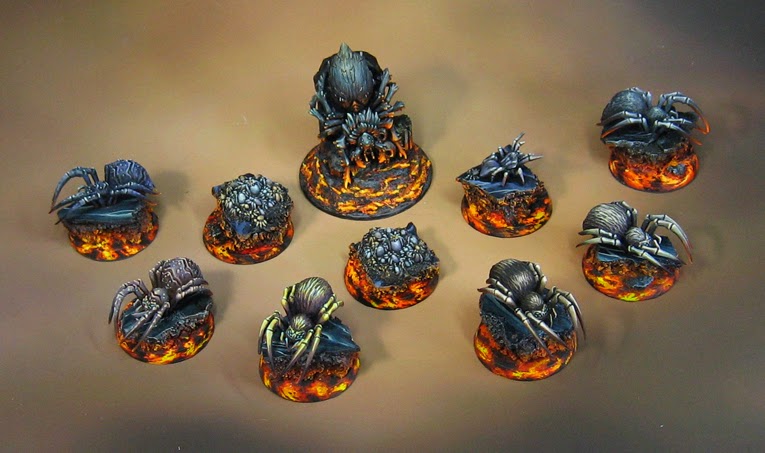 With the value of each individual figure in LOTR, it's important to consider multiple roles for everything you include in your army.

I have to worry about fighting high fight skill things like elves, so for than instance, I am also working on a Wraith on a Fell Beast. 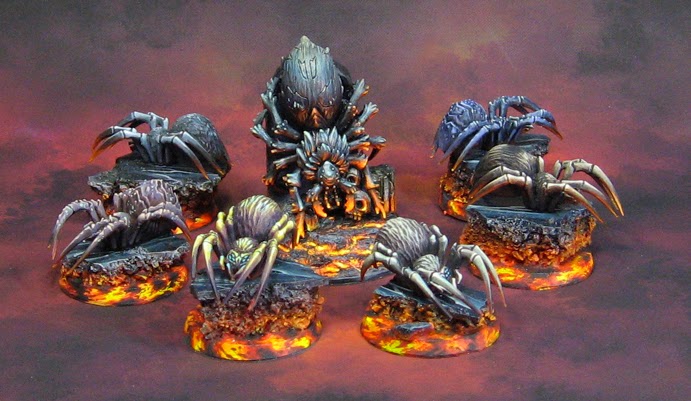 He's not a 'named' character, but at least it will be able to toss out some high fight skill in that all important situation where the Spider Queen can't block out enemy characters from a fight.

Plus, it will be able to hop over terrain and get into areas the Knights cannot.  It could also fly over a combat and hit things like spearmen and pikemen from behind, negating their extra attacks.  Obviously, this idea comes from my Eagles! 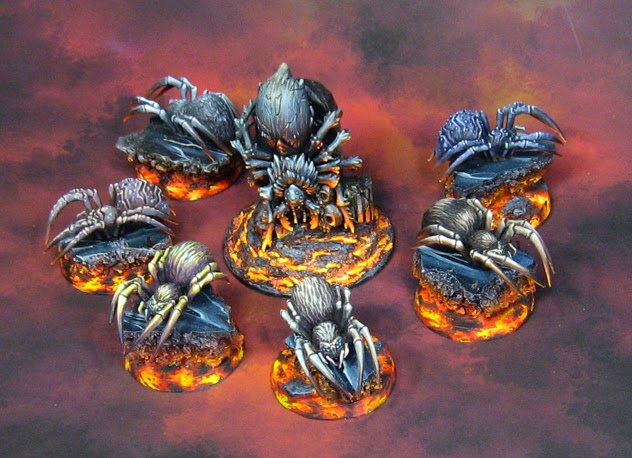