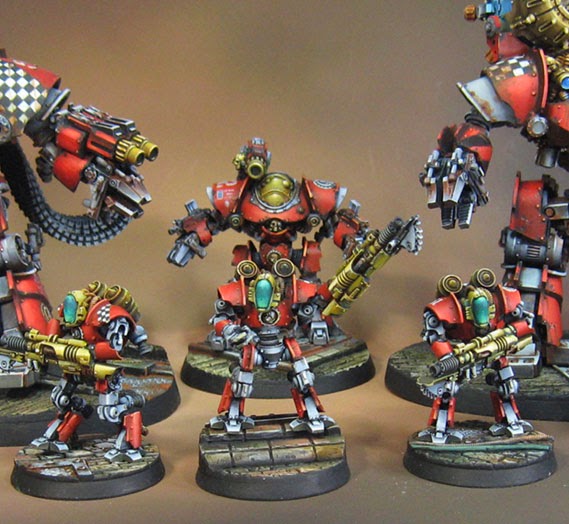 The March of the Machines begins now! 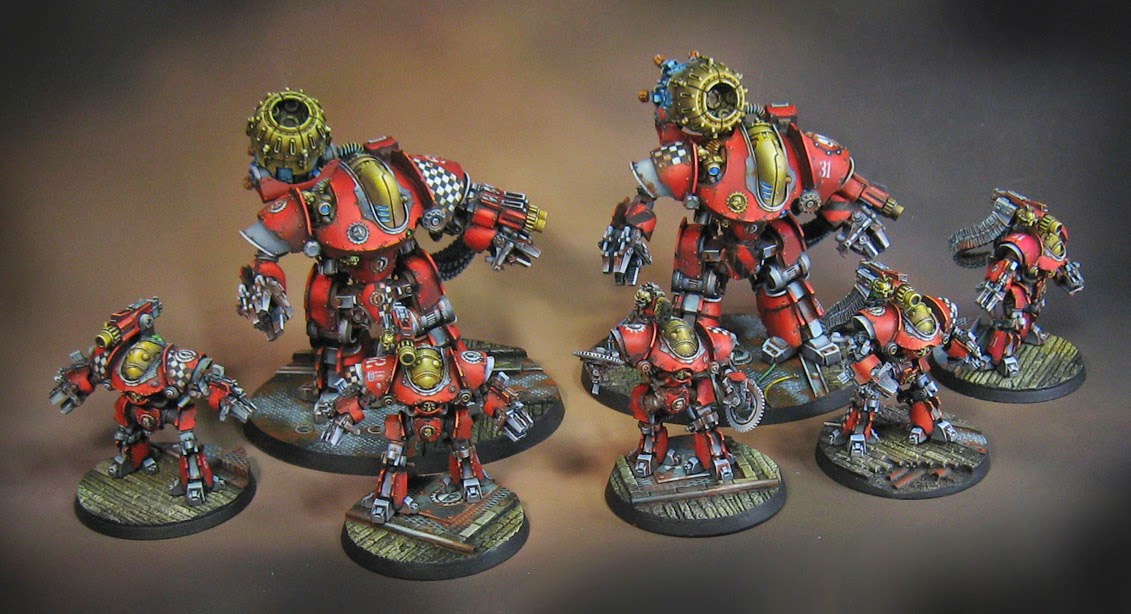 Thanatars and Castellax wlaking about...

The "small" guys are on 60mm Dreadnought bases. 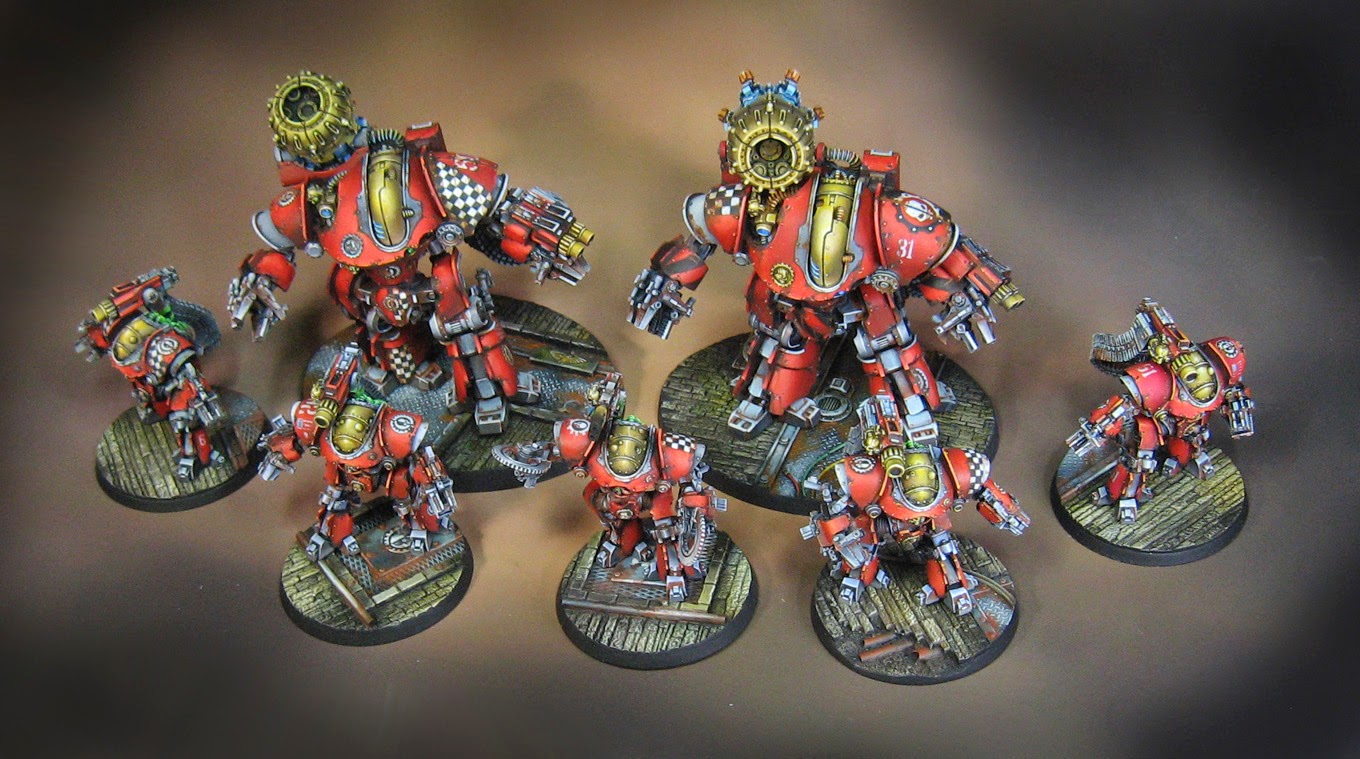 In this image, the "smaller" guys are on 40mm terminator sized bases.

It's really interesting to see them all gathered together like this! 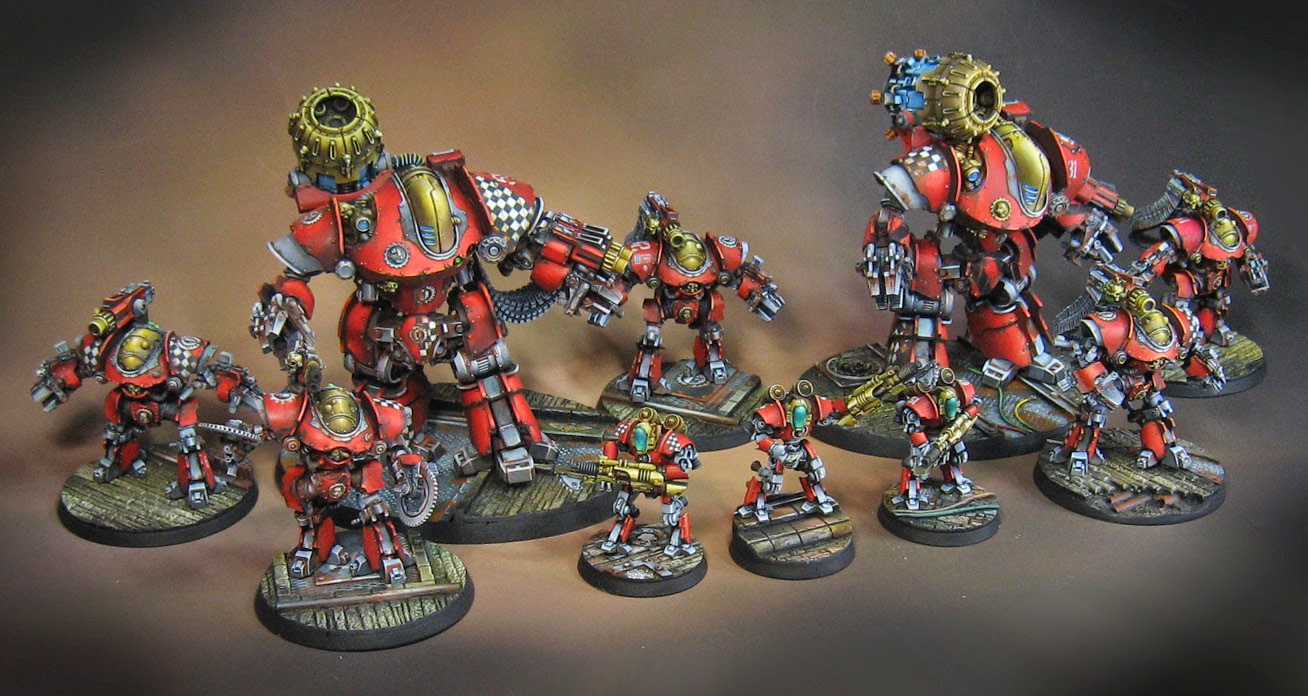 I have also been looking at the similarities between them, and how one sculpt was scaled down in sections to keep the same look in spite of the difference in size. 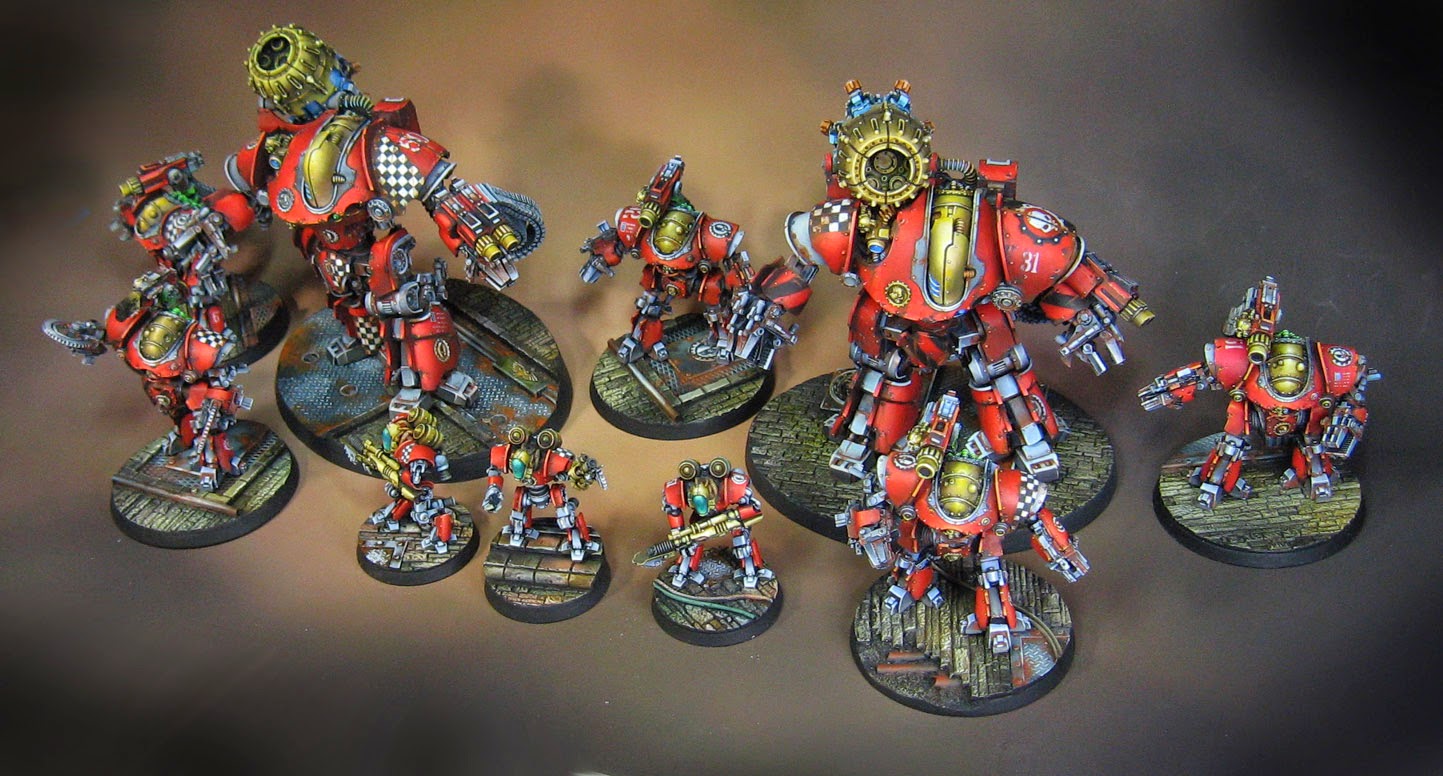 Stay tuned!  Much more to come!

Billy the Kid strikes again in: The Pony Express 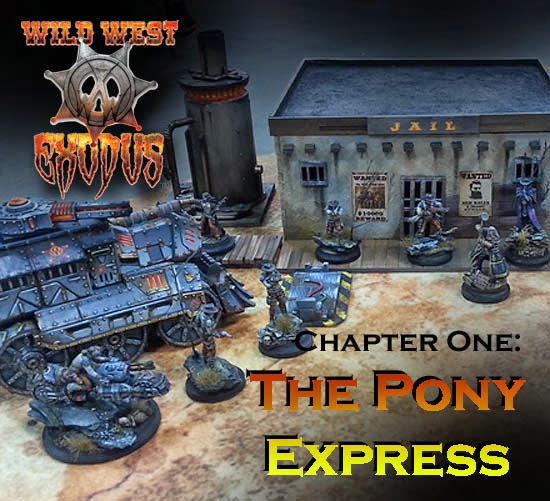 Rich and I spent many hours doing some decent size demo games in the Open Gaming area at Adepticon.  It was very nice to have that space to work with, by the way!

We set up lots of terrain on Rich's new battle mat, which leveled off the tables nicely.

The Outlaws return to Wappelville once again, this time to heist some RJ-1027 and a group of very valuable ponies.

Billy the Kid had been in Jesse's doghouse ever since the great Drapery Disaster, when many yards of exclusive French drapes (destined for Miss Fannie's establishment) were destroyed.

The plan was for Billy to ride in, grab the RJ_1027 and the Ponies, and high tail it out of town.

Here's what he brought along: 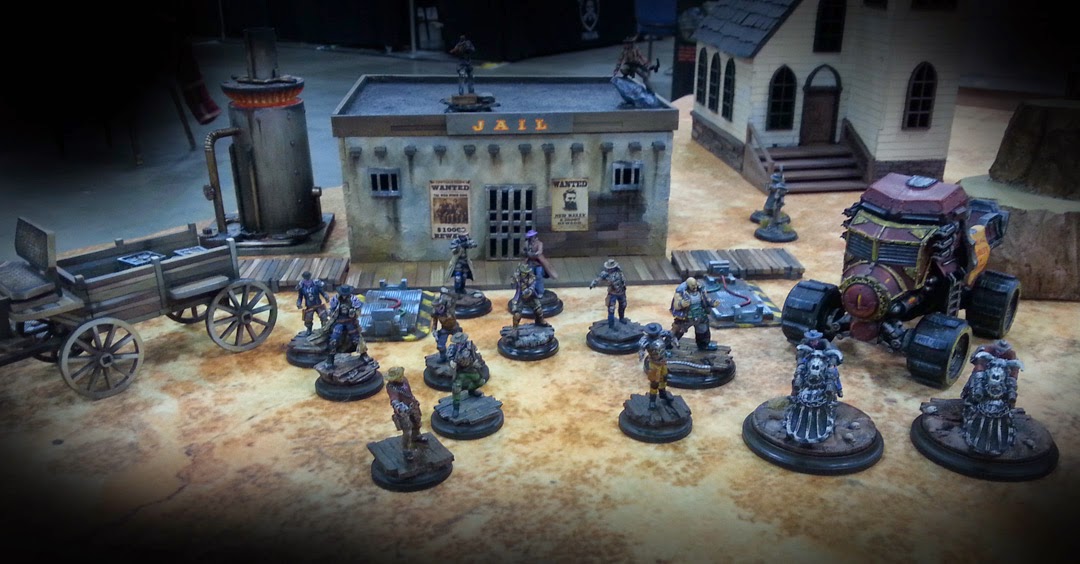 The task of stopping this heist fell on Warren Earp, who had just arrived in town himself.  He was there at the request of Judge Stern.

Warren was a bit befuddled at the odd looking stranger standing in the Judge's chambers, dressed in robes such as Earp had never set eyes on.  He felt it best not to say anything at the time...

The repaired Judgement heavy support was also ready to go, and the crew was eager to play some Hangman!

You can see the ponies running through town.  One of Billy's gang had gotten to the livery door and let them out.

The RJ-1027 canisters were also scattered around the town.

Miss Fannie was having a lovely Sunday morning conversation with the Preacher and his wife, unaware of the chaos soon to follow. 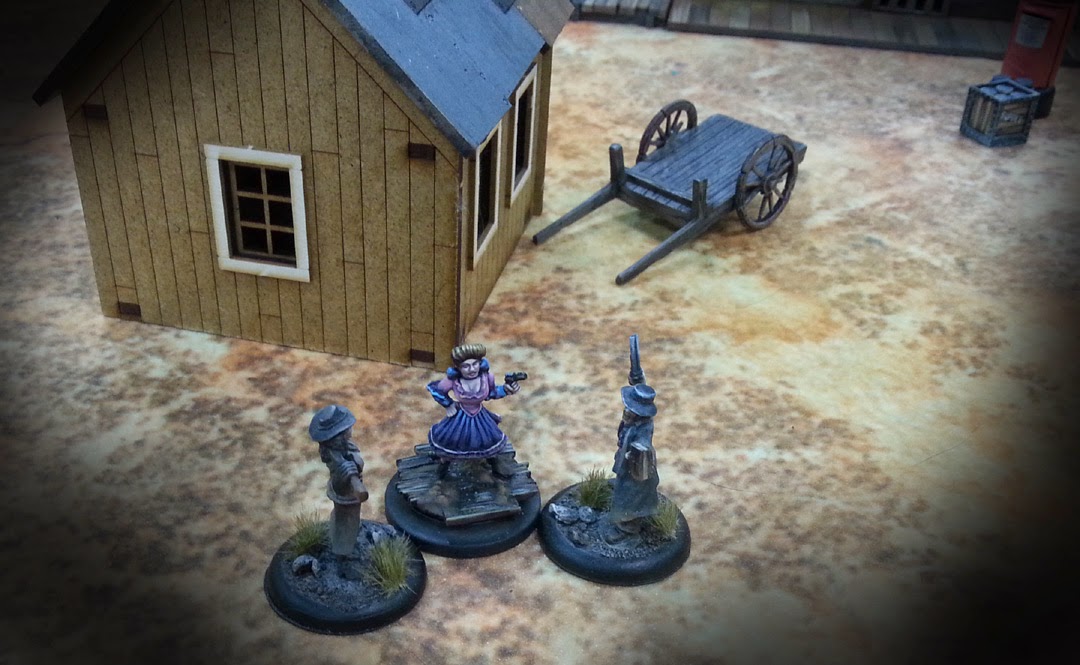 They thought it very odd that such a rare commodity of horse flesh would be running loose through the streets. 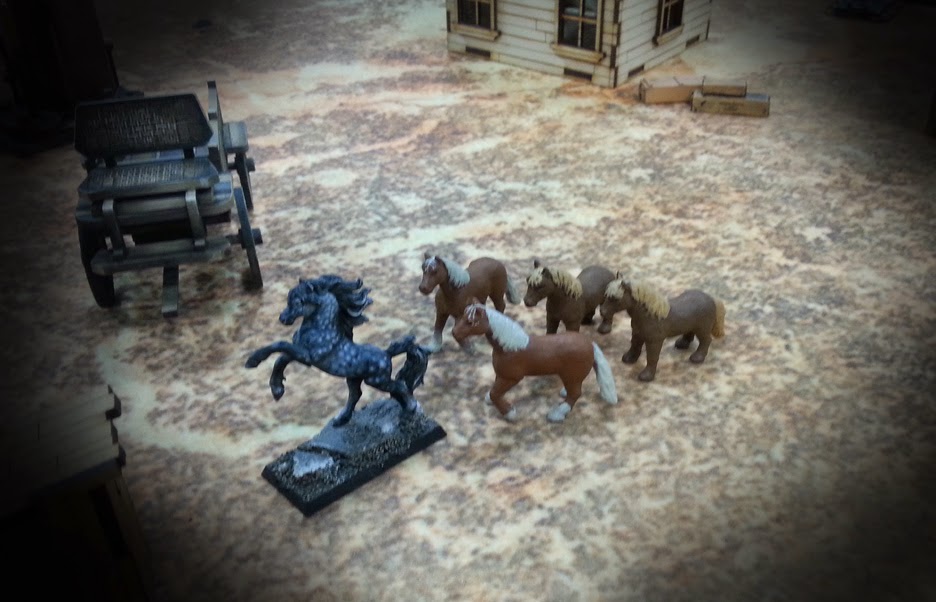 It was not long before the alarm was sounded, and the Lawmen took up positions behind the Jail, the stable, and the Power Generator. 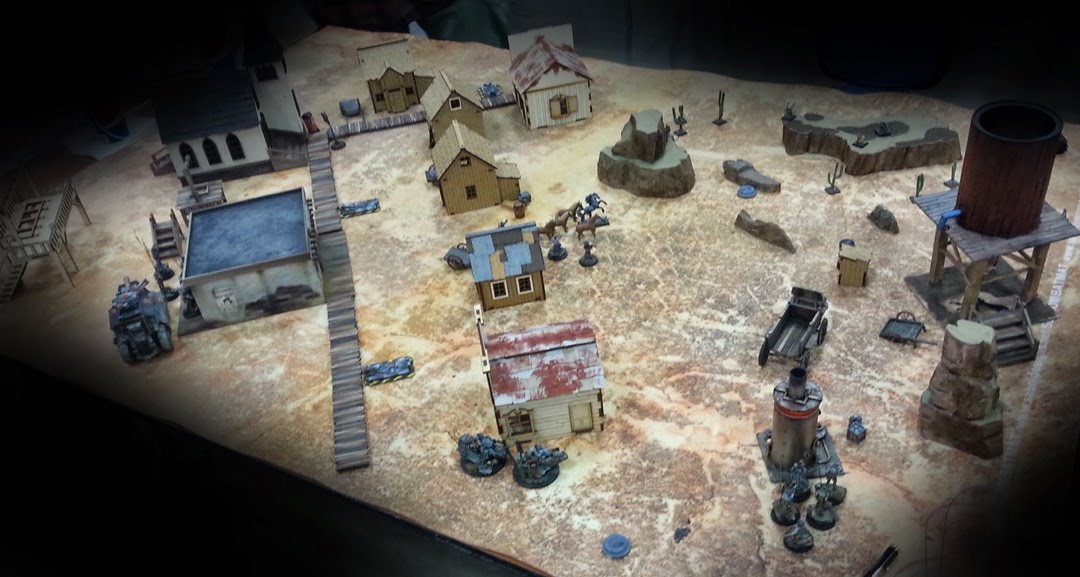 Why this canister needed to be placed by the outhouse was a mystery to everyone. 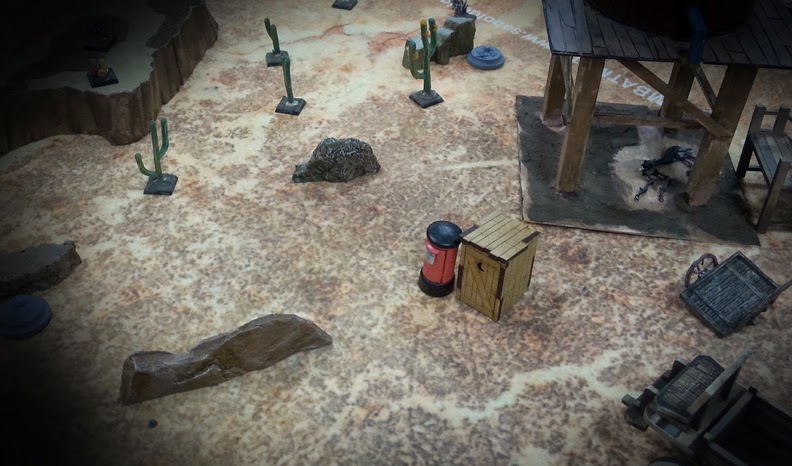 The mysterious robed stranger appeared again, and he seemed to be pointing Warren in the direction of the church.  They would get there by using the small gallows as a screen... 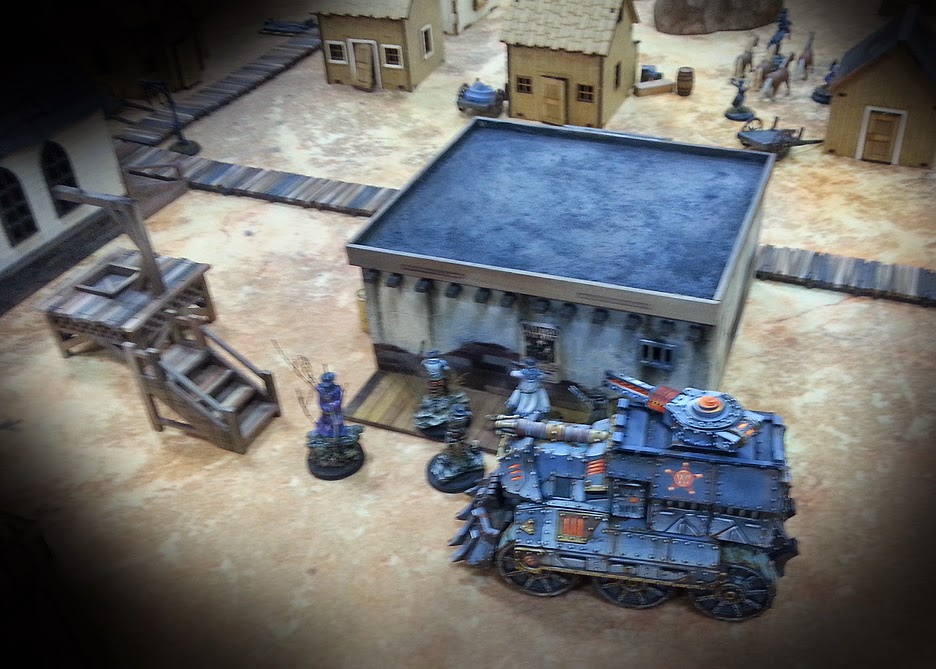 Billy had decided to surprise the Lawmen by driving through the church cemetery, hoping to use it as a screen from the Jailhouse. 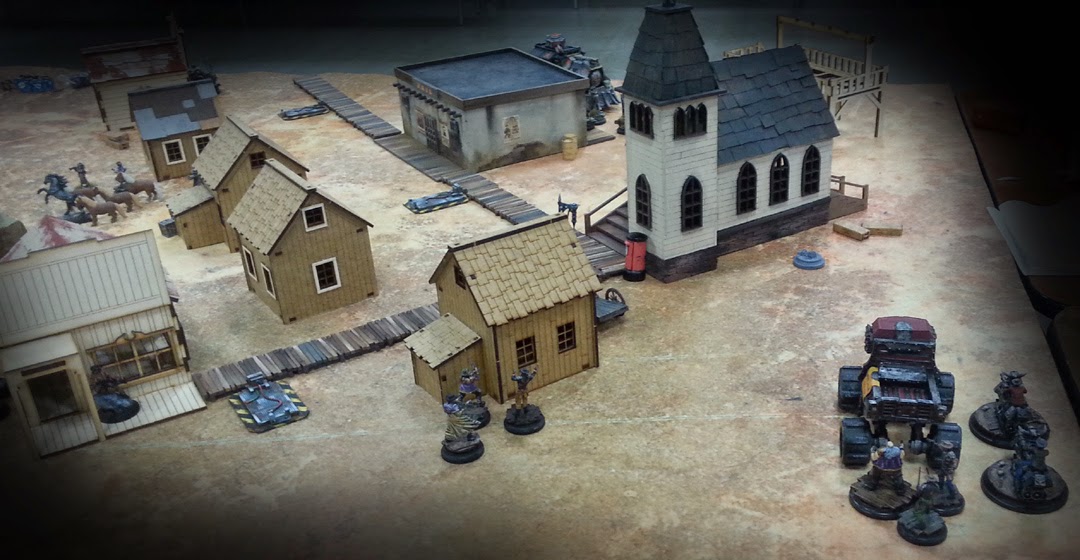 Yet another city vehicle was claimed by the Outlaws to secure the canisters of RJ-1027.  The disgruntled workers of the Wappelville Streets and Sanitation department are not at all pleased with the wages offered by the current Mayor.

As a result, they frequently cast in their lot with the Outlaws. 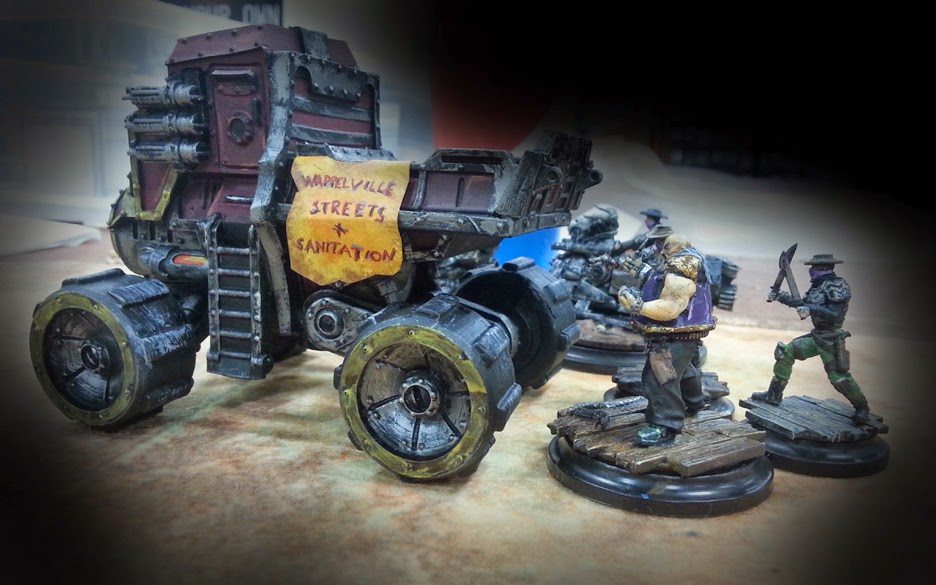 A scattering of other Outlaws came from the hills and brush outside of town, including Apache Kid. 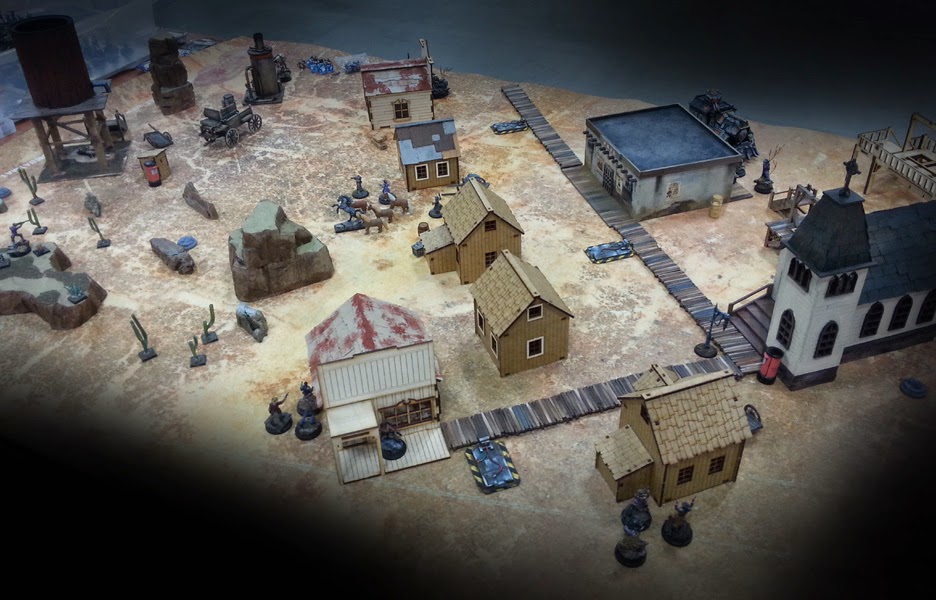 The Judge would lead his own contingent of pistol packing Hired Hands towards the water tower. 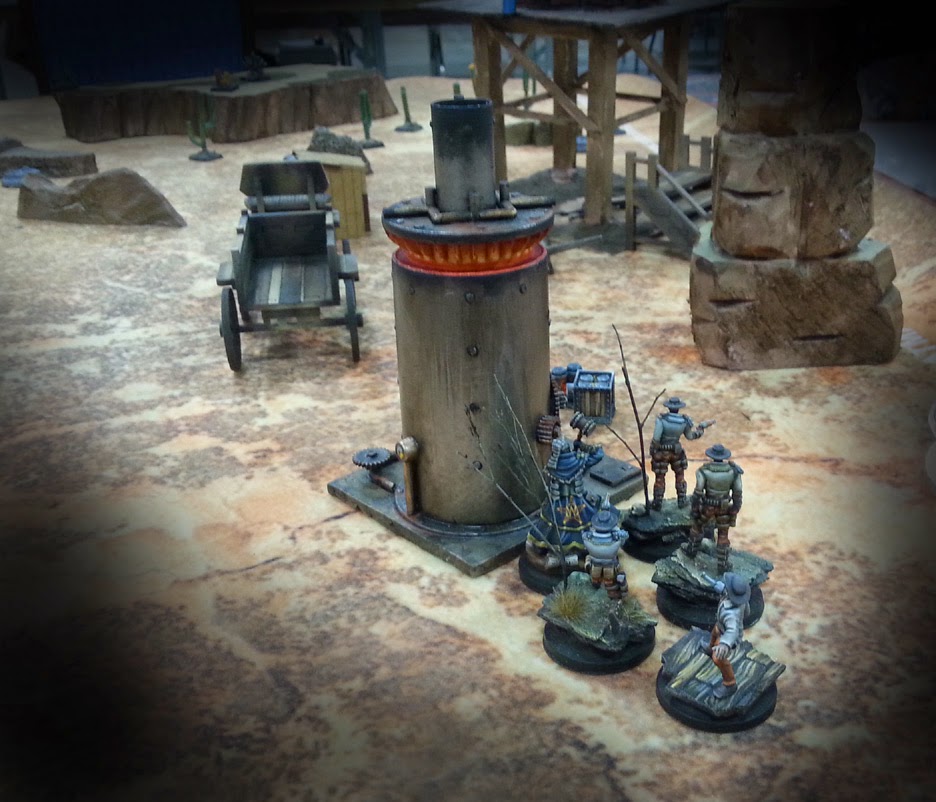 Fortunately for the Lawmen of Wappelville, the robed stranger had hinted that an attack might be coming, and a few mines had been placed in key areas.

The Outlaws were not expecting this, and they fired wildly at the deadly traps in the hopes of destroying them! 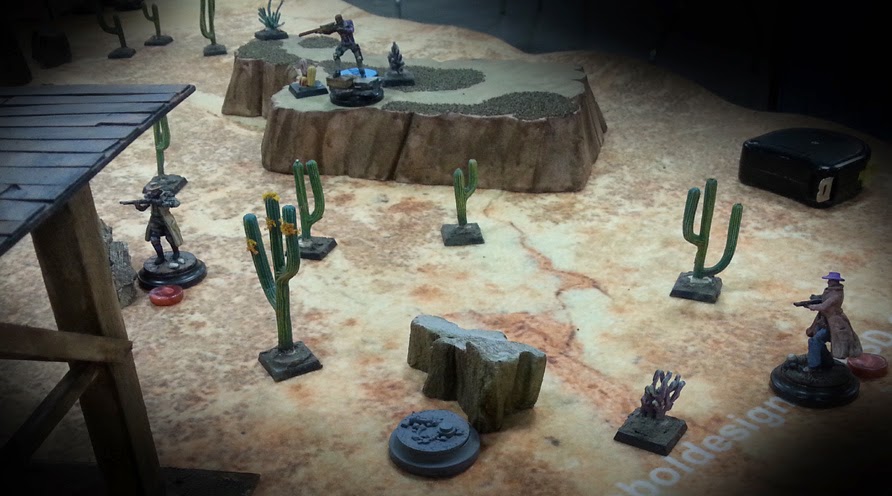 The Interceptors held their positions behind the stable, hoping to rush out and herd the very frightened horses back in. 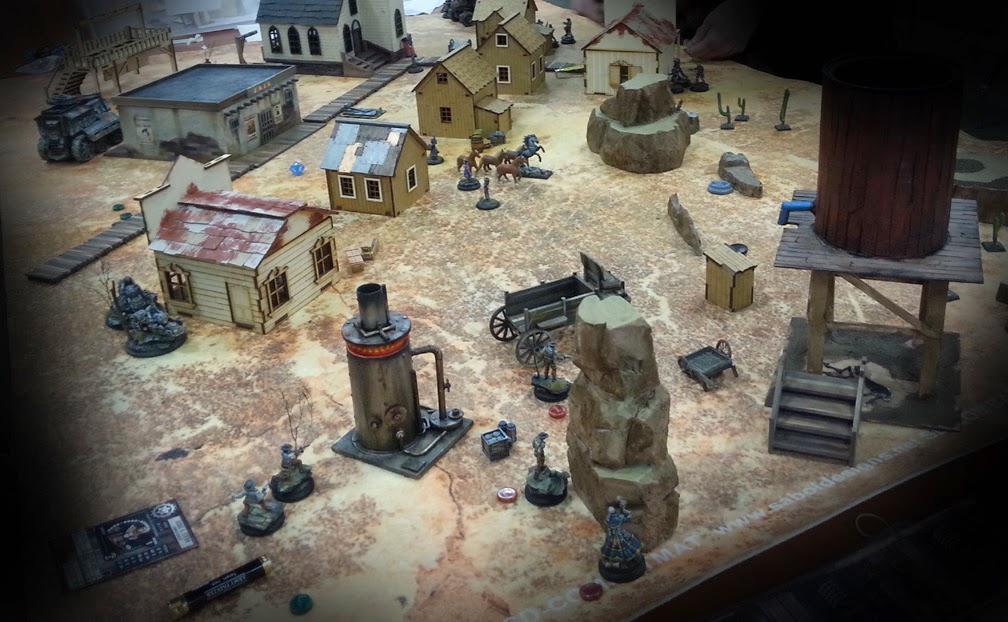 With their Sunday morning once again shattered by impending violence, the Preacher ran toward the Jail to plead with the Lawmen to spare the town. 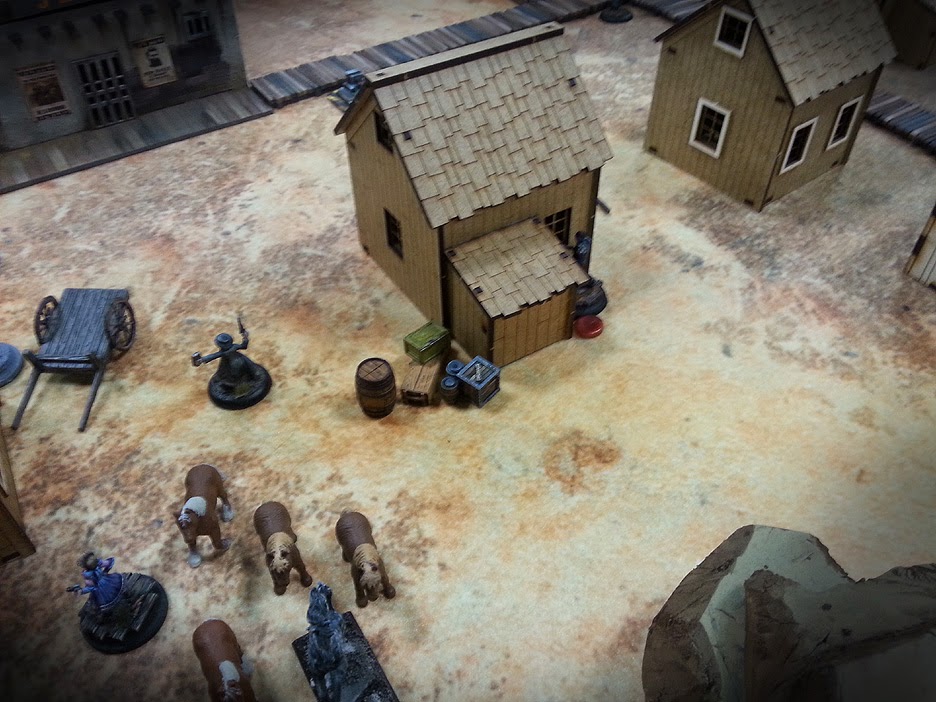 The Interceptors jumped out earlier than expected in the hopes of dropping some ordinance on the frazzled Outlaws, who were still shooting at the mines.

However, the frightened thieves were running around too quickly, and some cowered behind rock formations.  This made them almost impossible to hit. 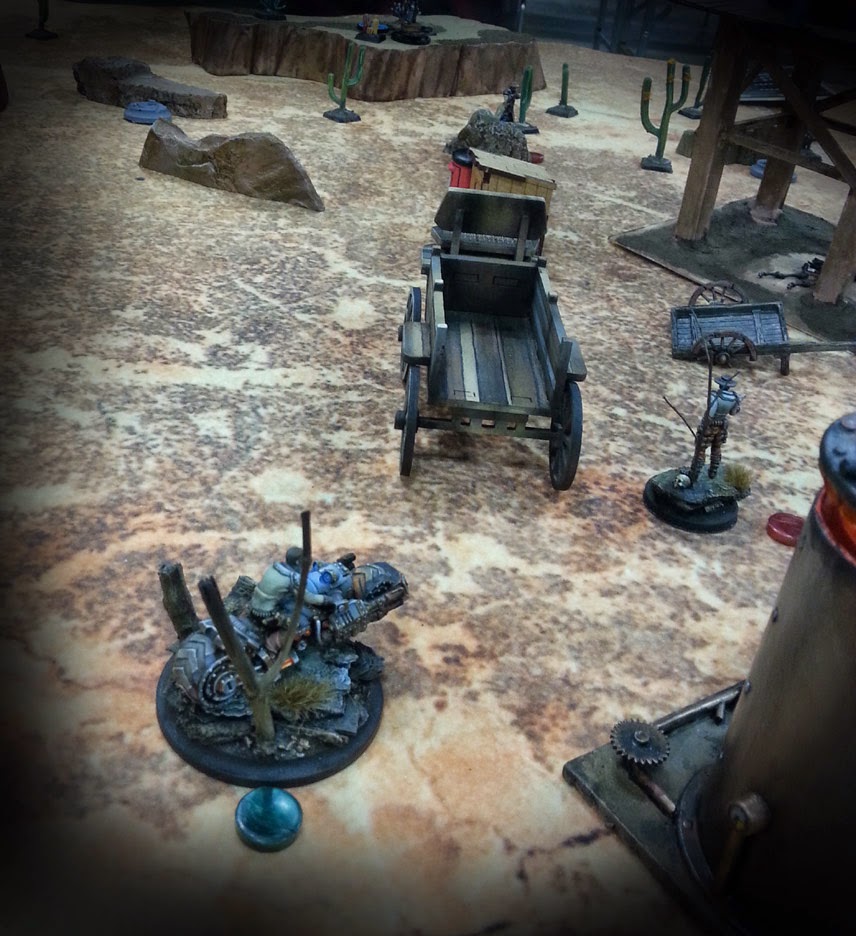 Judge Stern used the distraction to advance to the mesa, and then on to the water tower.

Does Billy the Kid redeem himself in the eyes of Jesse?  Will Warren Earp earn the respect of his brothers and stop the Outlaws?  Wait and see as we continue in part two, Hang 'em High! 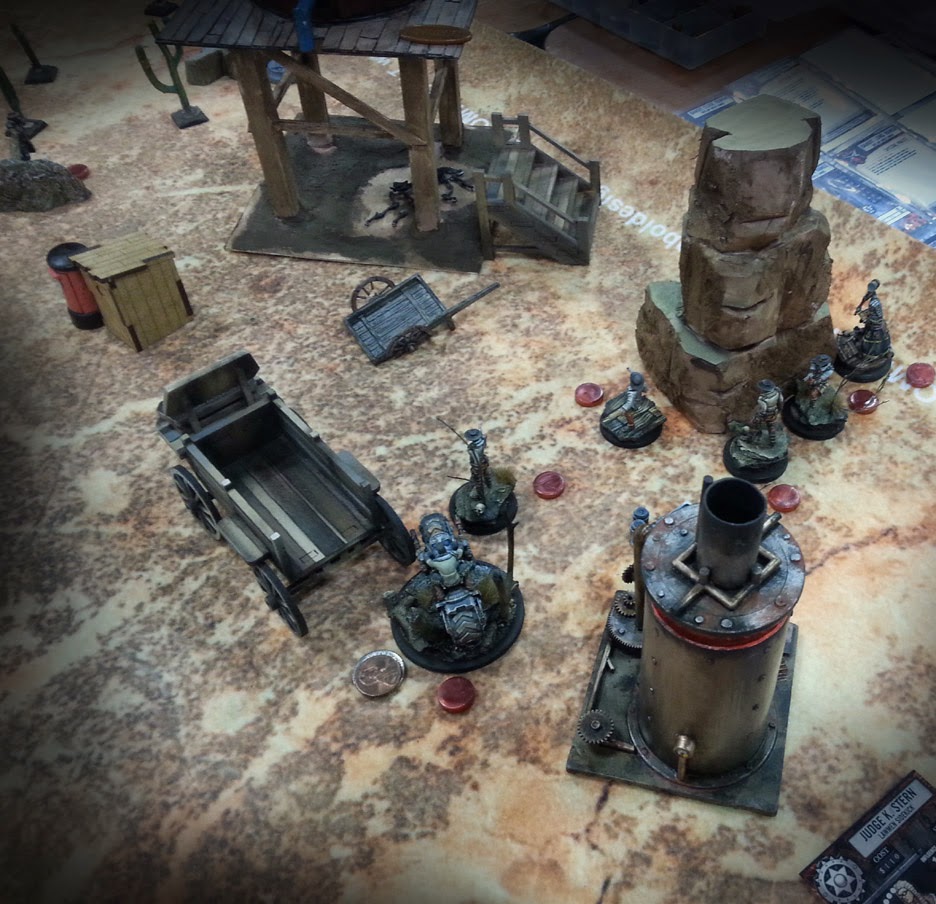 Posted by wappellious at 8:14 AM 4 comments: