This Ain't no Bull 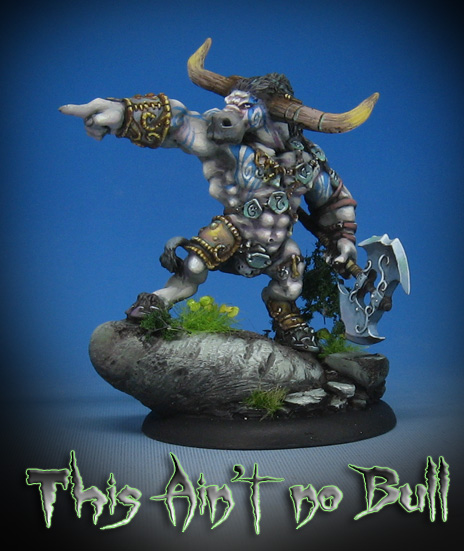 I think this might be my favorite of the old Confrontation minis.  This is a massive hunk of metal, but I love the pose!  The only other figures I can think of that I enjoyed this much would be the mounted characters (possibly the Lions of Alahan?).

This one was painted entirely in acrylics, while others have been done in oils.  While there were many practical reasons I used these mediums on different figures, I also wanted to show folks that figures painted with oils or acrylics (entirely, that is) look exactly the same.

I thought of this after a few queries and replies to some of my oil painting posts, where folks have said that the figures look different.  However, this was due to an entirely different photo setup rather than any difference of medium.  One batch of oil painted stuff was shot in a massive group shot, while most tend to be individual set ups like this figure.

We are in the early stages of Adepticon right now, so fatigue is already setting in.   It's been no stop prep for this convention for months, and it only accelerated as the date drew nearer and parameters seemed to change by the hour!