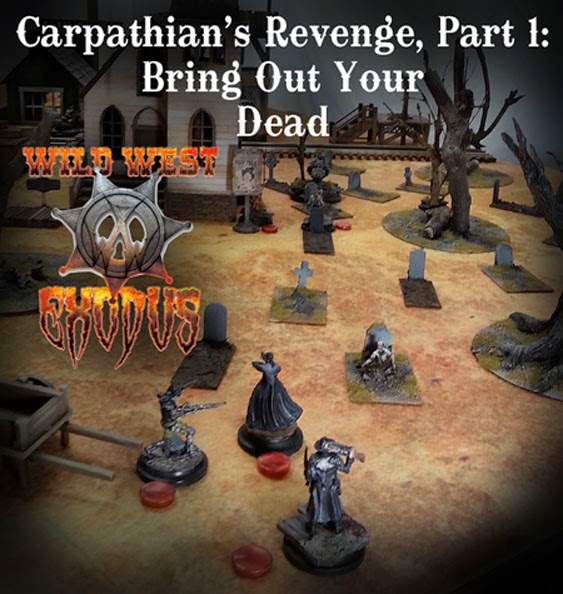 After Jesse's failed attempt to secure the body of Billy the Kid for Carpathian, the evil genius decided to take matters into his own hands.  He was determined to secure not only Billy's corpse, but as many other recently departed as possible.

The assumption was that the Lawmen were ripe for the picking, as they suffered horrendous losses against Jesse.  Interceptors, Lawbots and more were destroyed in that titanic struggle.

Little did he know that new heroes had been brought to bolster the defenses of Wappelville!

A large contingent of Lawmen Rangers would define the term tenacity and courage under fire.  The Copelie Sisters and their deadly pets would also join in the fight, along with the famous Thomas Tate Tobin.

After the previous battle in the streets of Wappelville, Carpathian determined that speed would be essential.  Therefore, a mercenary buggy was added, which could get critical elements to various parts of town which the Ironhide could not reach due to its bulk.

The Lawmen would be deployed within the town confines.  They determined that securing the rail car (from Burn in Designs, of course!) would be vital to keep the Enlightened from crossing through town.  It was also feared that Carpathians's hideous creations might use the rail car to remove more corpses... 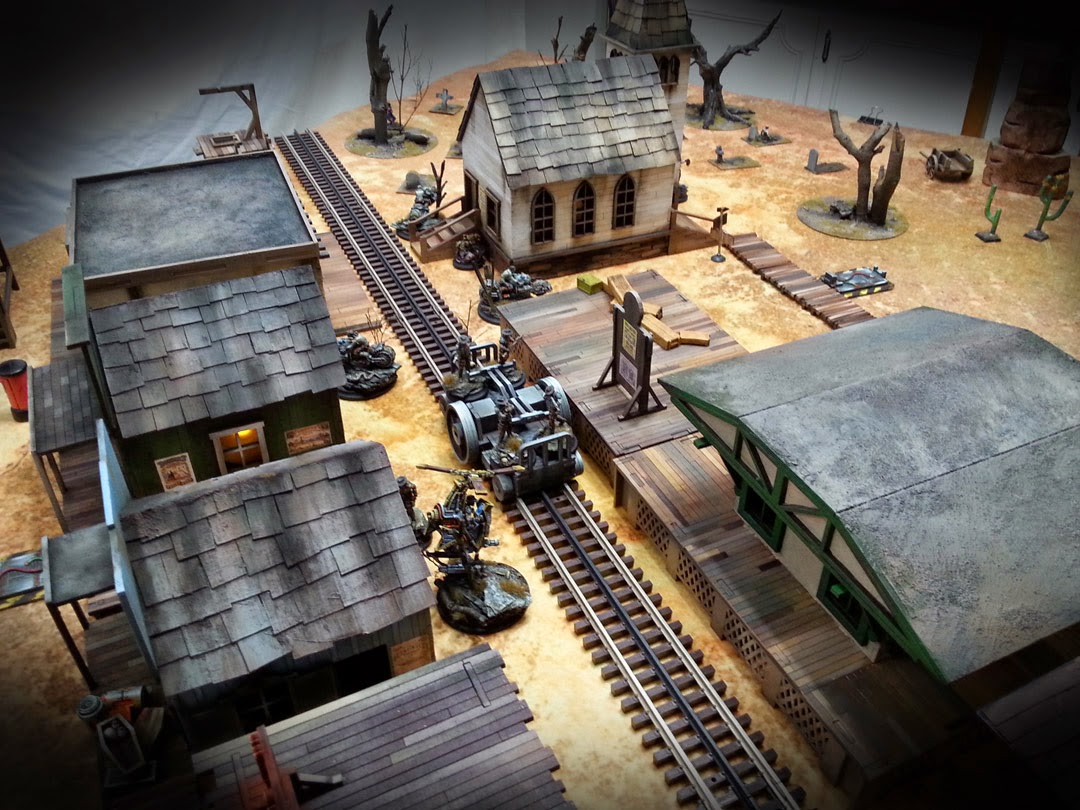 In addition, the rail car could cover the entrance into town.  You can see it's sight lines here.

It would require two Rangers to activate it, moving at 7 inches per activation.  Two more passengers could be carried. 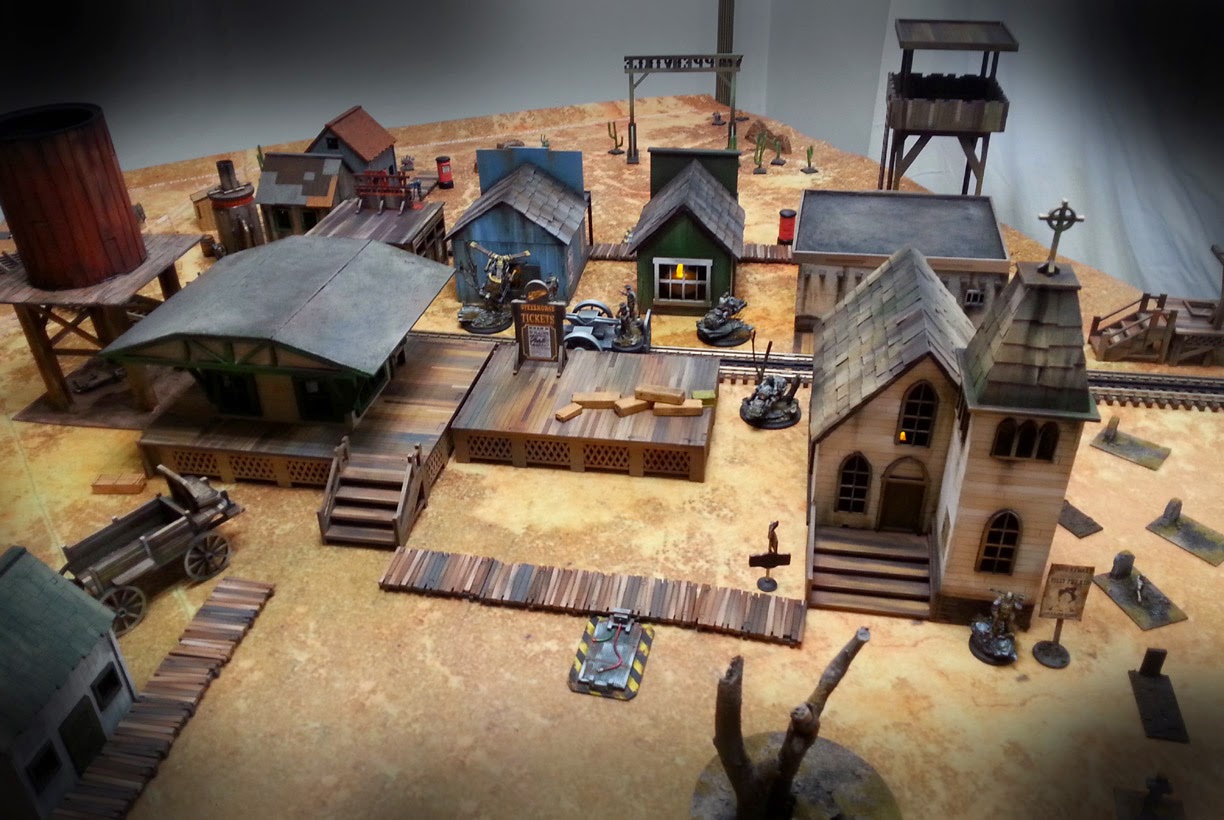 Keeping the train line into town will be important so that the shipments of replacement Interceptors keep flowing!! 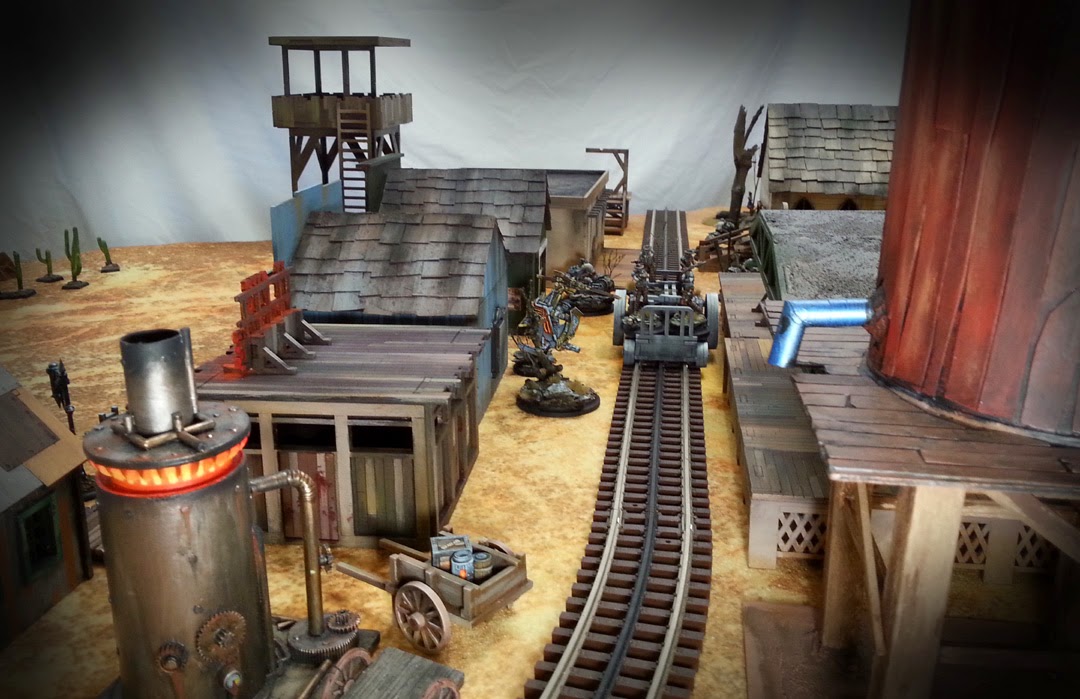 A large contingent of Rangers took positions in the Church, covering the graveyard.  They would be joined by Interceptors, a K9, Carl Fredrickson, and Thomas Tate Tobin.

Could Tobin prove his value as a sniper?  His influence alone was quite valuable. 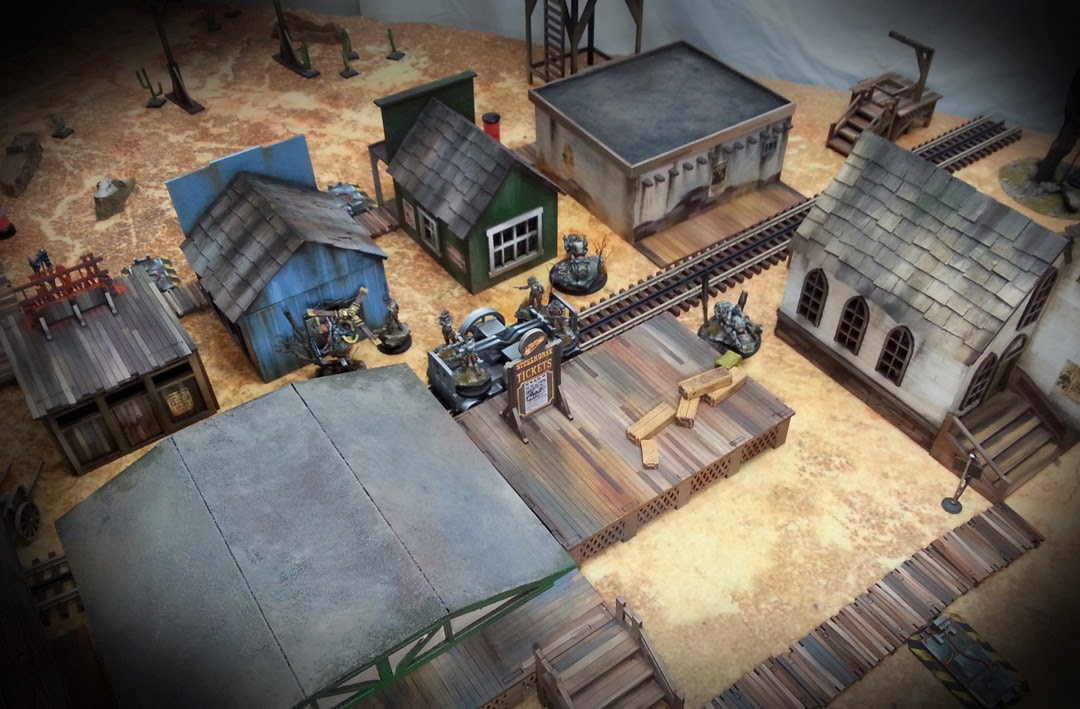 Carpathian's minions attempted a more stealthy advance toward the graves, using the main entrance into town as the pathway for the vehicles. Carpathian wanted to fool the Lawmen into believing that all the main effort would be spent going after Billy's body in the Undertaker's. 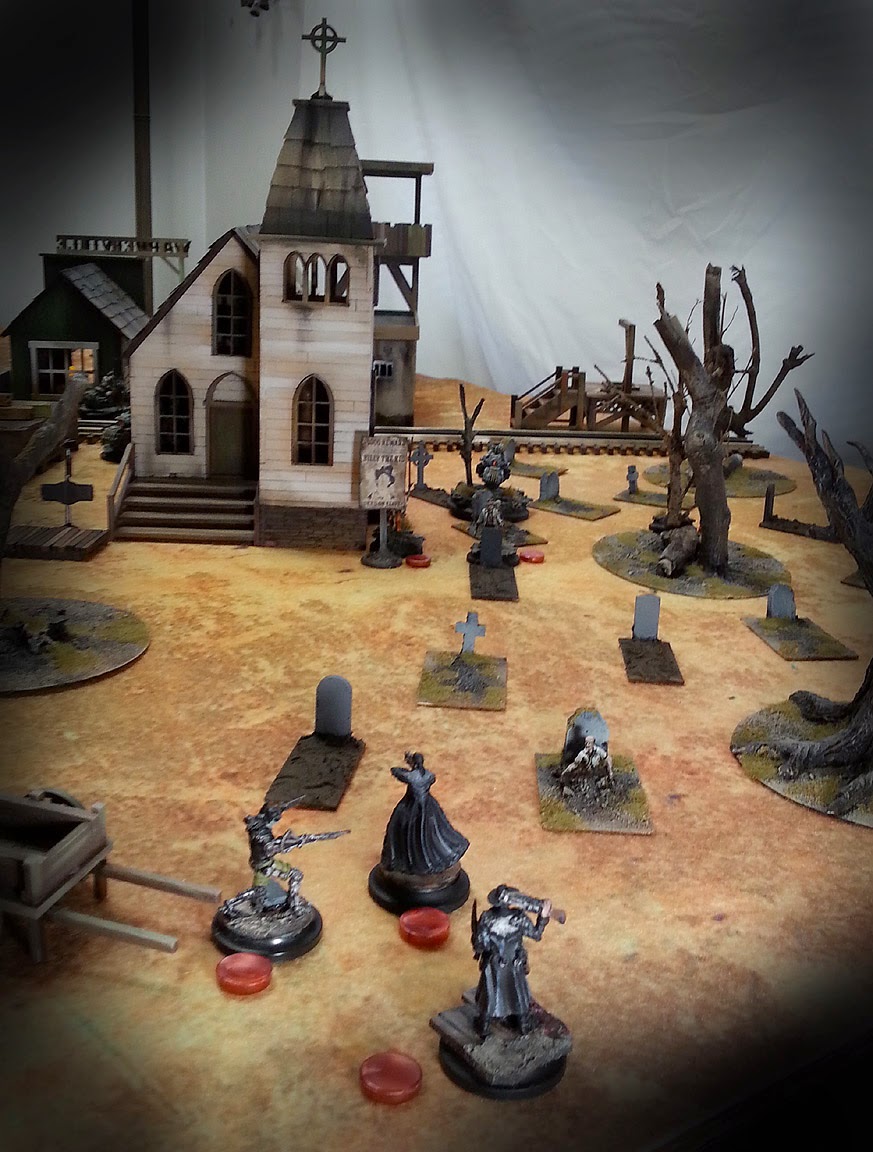 To add further protection against this action, the gyrocopter dropped a series of mines before the front entrance.  This move was anticipated by young Edison, and he had a deadly counter for this strategem in mind. 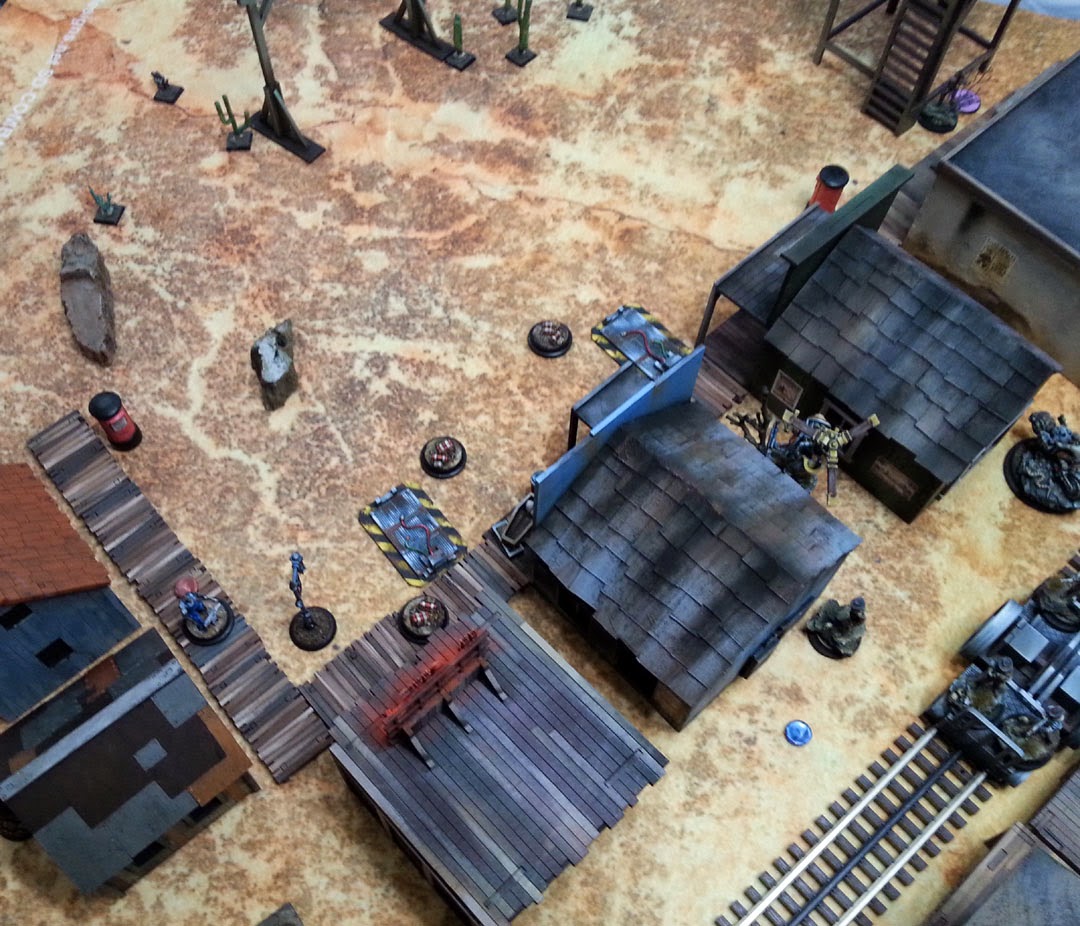 Watch out Clyde!!  That rail car's hot on your tail!!  Get off those dad-gum tracks... 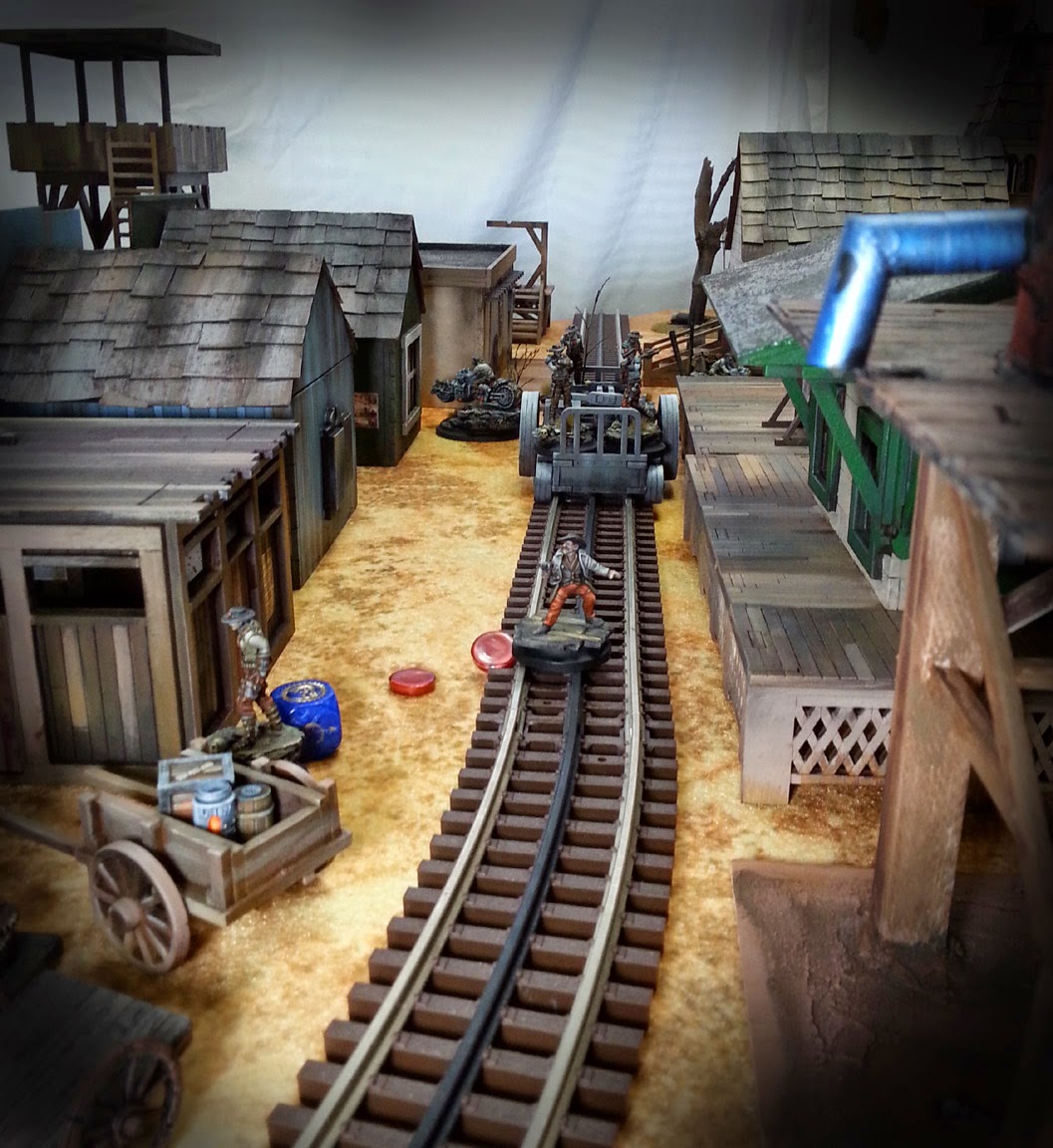 The rail car did manage to peek through the gaps between the buldings, allowing the long range Rangers to get a few shots into the shambling abominations. 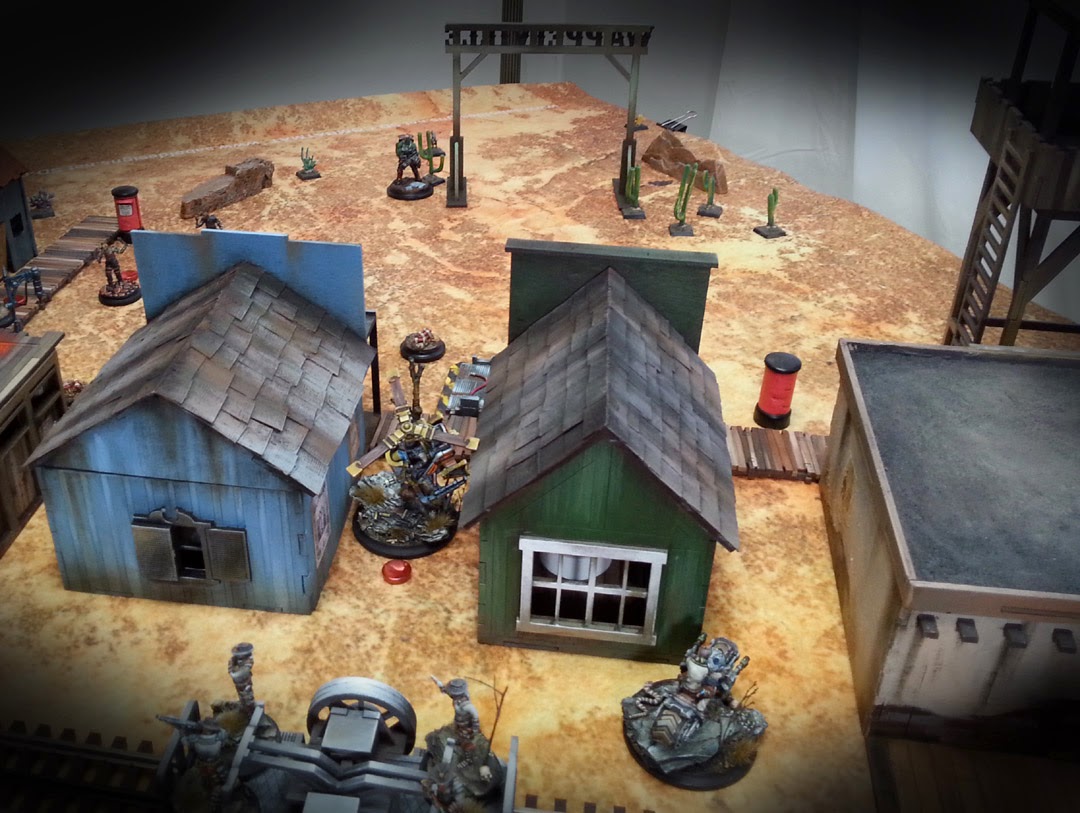 Their advance was undeterred, however.  Worse yet, large dust clouds indicated that much heavier units were speeding towards the Undertaker's establishment, where Billy and other 'fresh' resources could be found.

In our next episode, we shall see what dastardly plans Carpathian has for the good citizens of Wappelville!  Stay tuned... 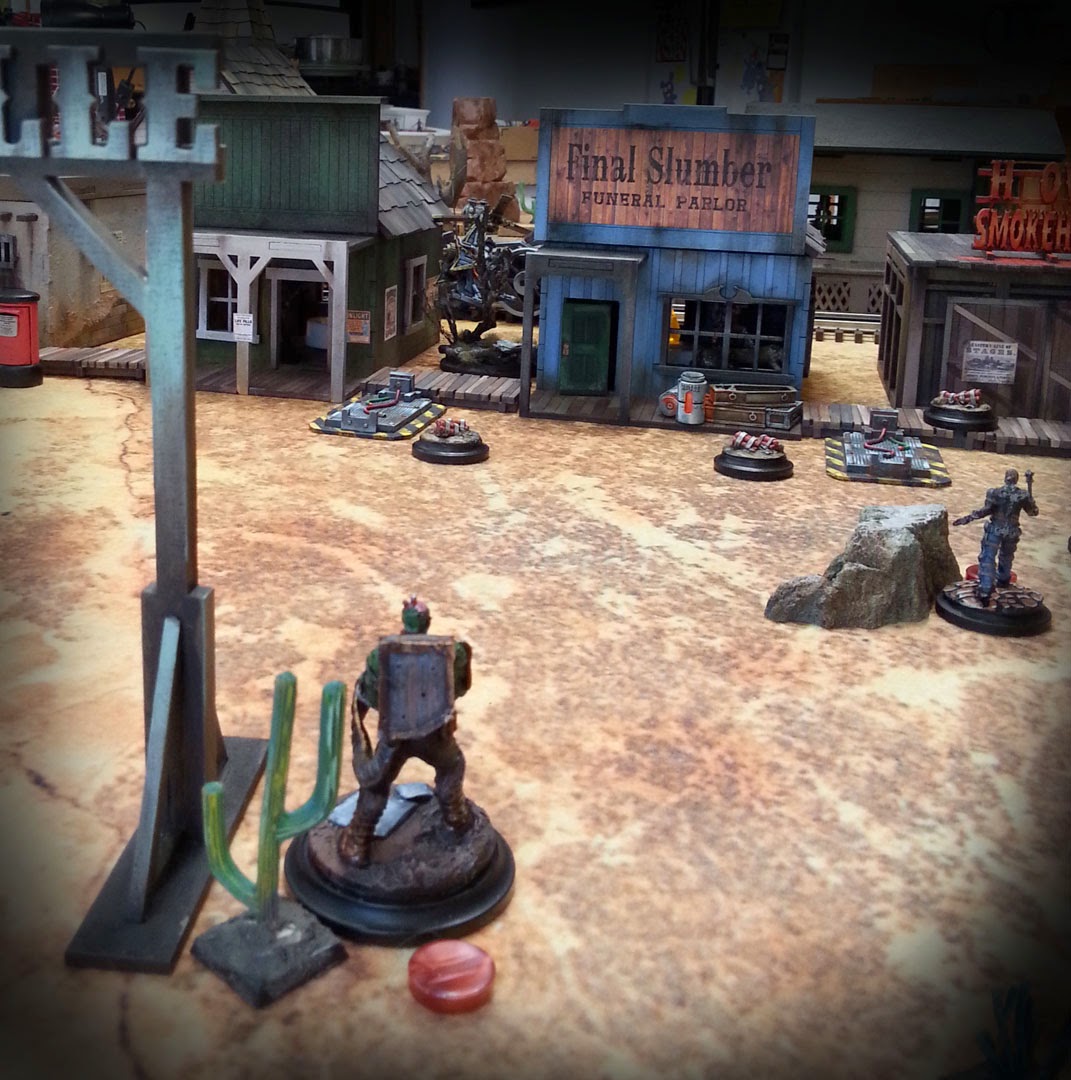 Posted by wappellious at 1:40 PM No comments:

Round one: Notes from Reapercon 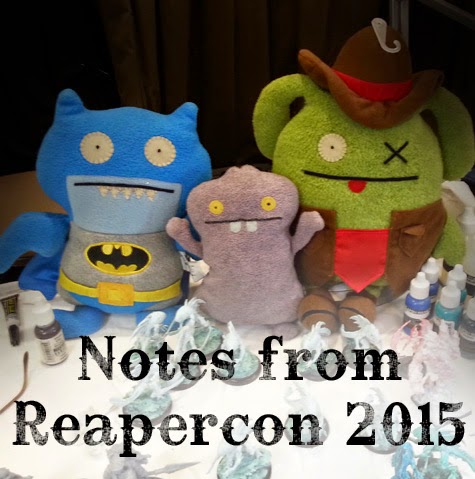 Reapercon 2015 was an amazing event.

Having the previous year's experience to fall back on was invaluable.

As you can see, the classrooms got a lot bigger!

They were not quite big enough to avoid being trashed by our basing class... thanks to Mike and his fabulous bark. 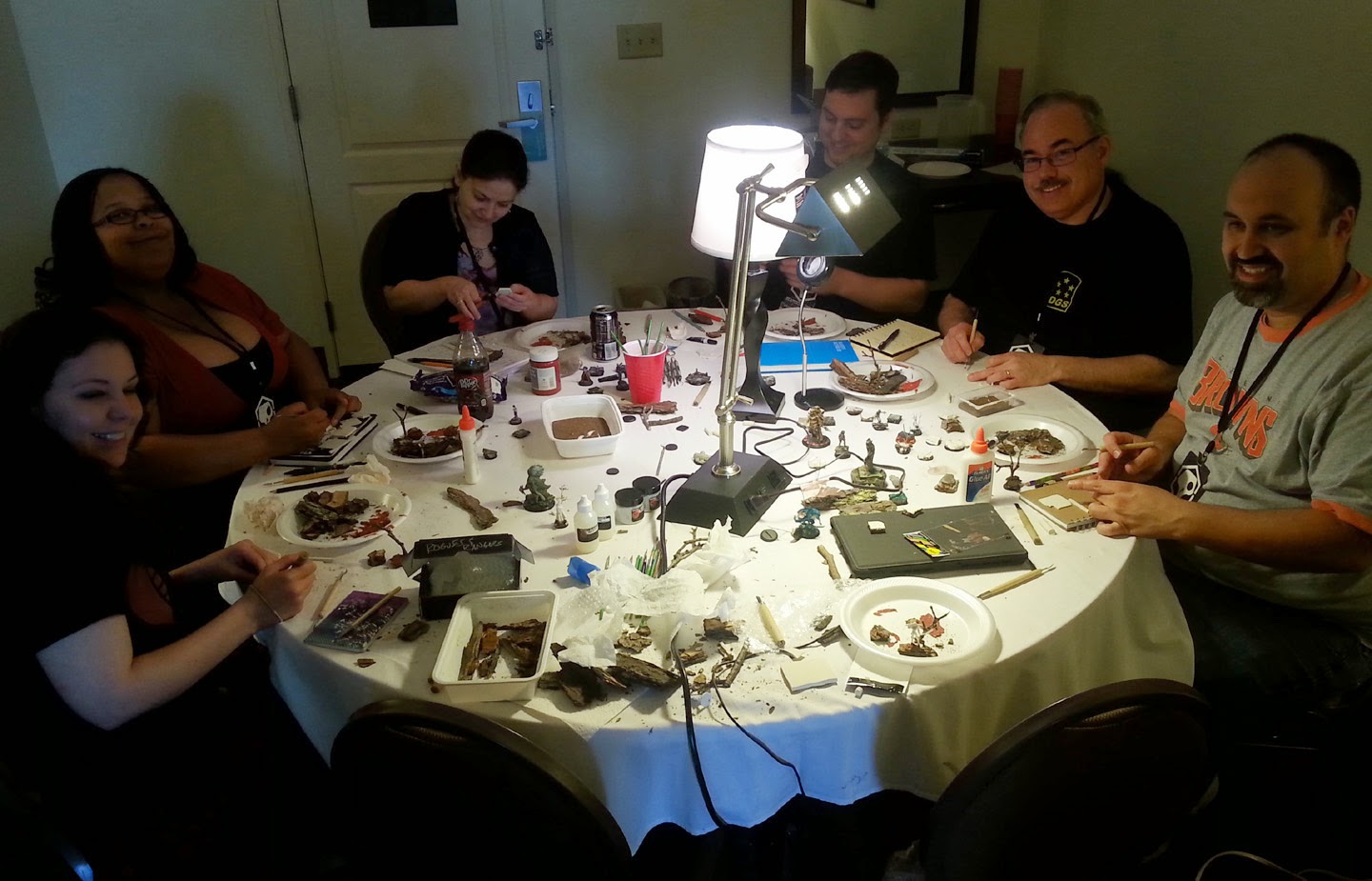 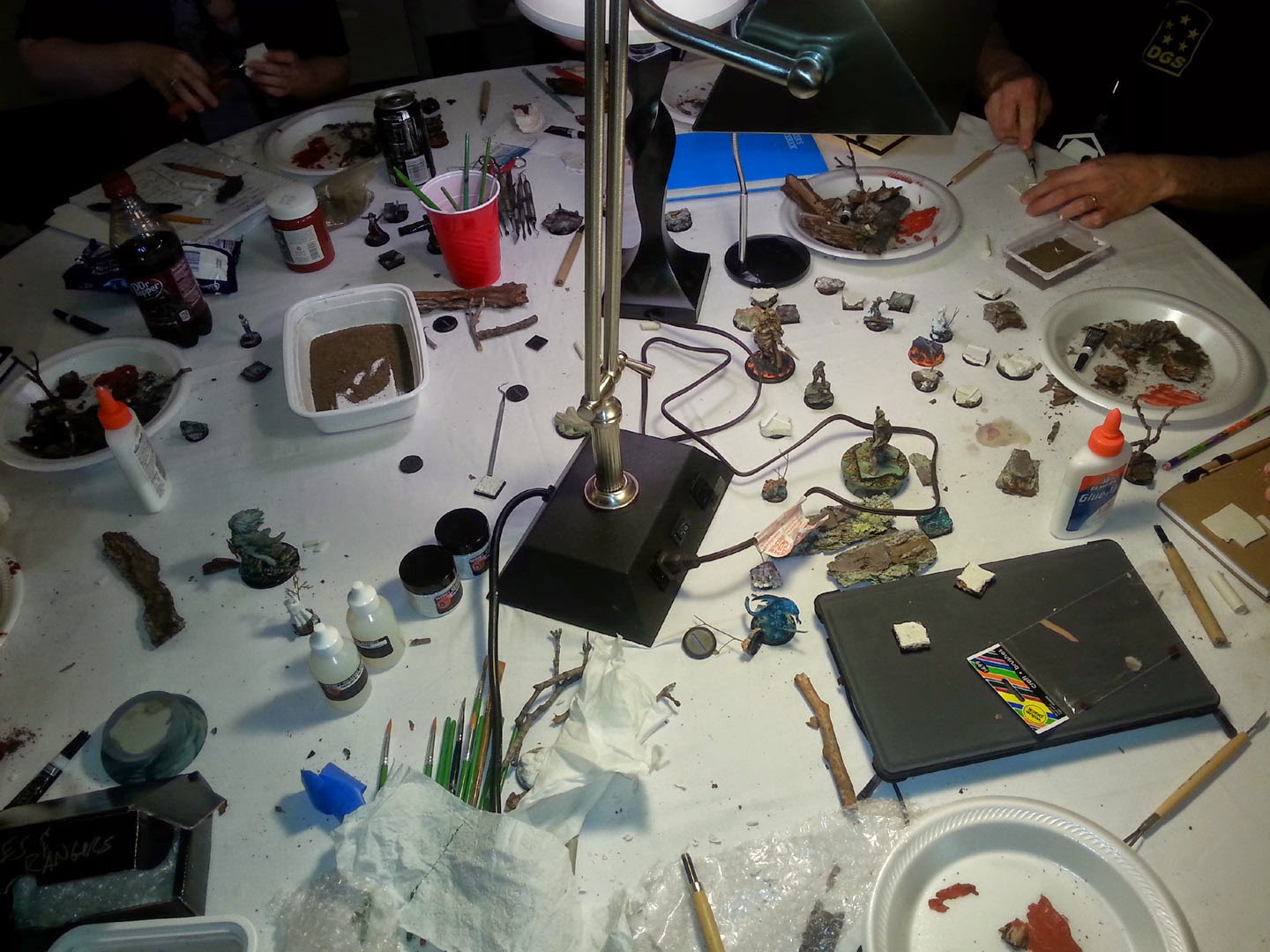 Here's the table set up in the main hall, being manned by a new Hobby Lawman... from Wild West Oxidous, of course :-) 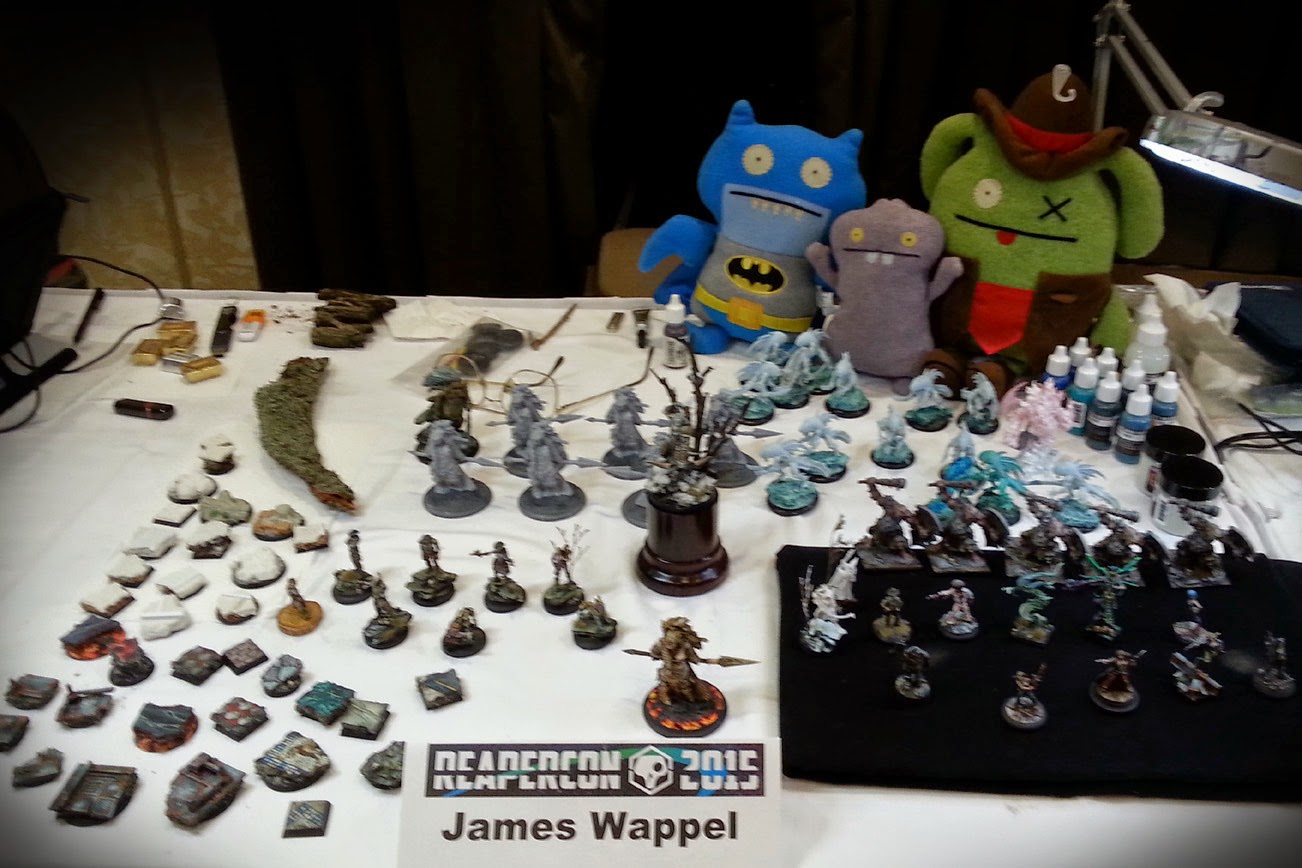 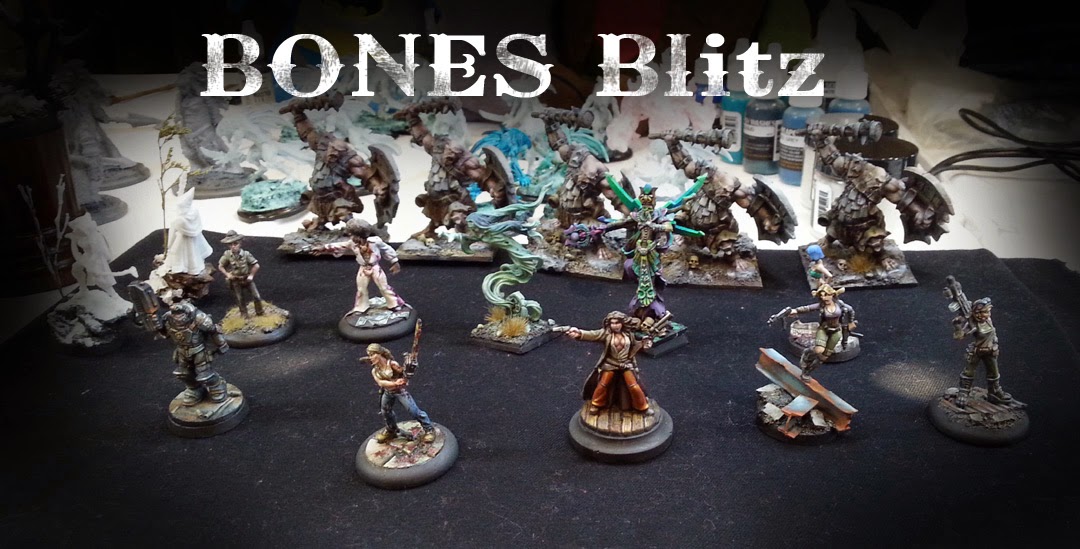 This year, I went out to the courtyard tables in the Main Hall, so that I could be joined in by those who were curious, or wanted to follow up on a class.  That would be one of my class veterans on the right.  He survived one after the other, mostly intact.

And my Birthday Brother from up north, Paul!  We were separated at birth by several years and national borders. 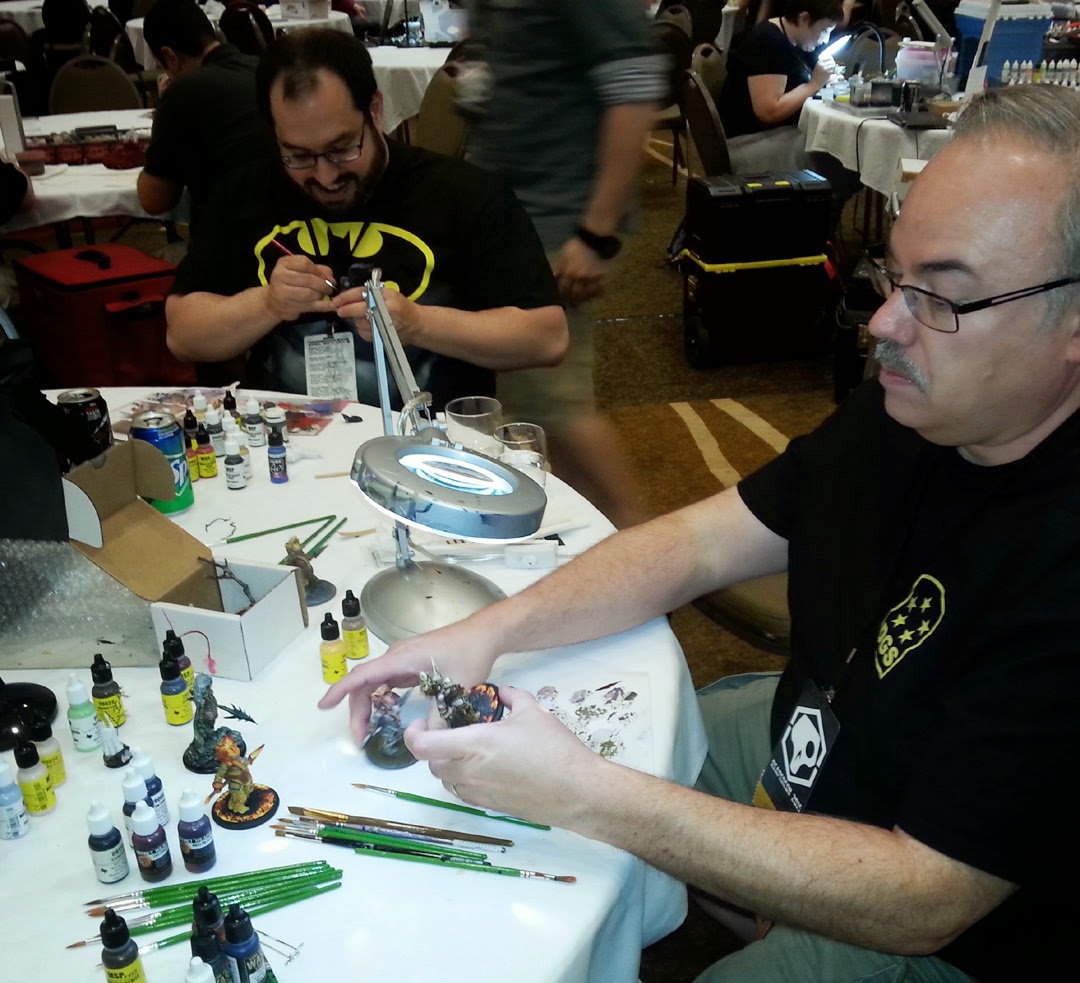 Re-convening downstairs after the classes was a great way to supplement them.  One of the things we tried to do was take the figures that were worked on in the Shaded Basecoat class, and see how easy it was to take them in a completely different direction than the original intention.

That's one of the principles behind that technique.  The ability to change things radically, since you don't already have lots of time invested in one section or another.

This was the Reaper Hall of fame banquet.  Humans and cows alike were called to the Mothership!  It was great to have Mr. Justin there as well. :-)

The wild and whacky speed painting event proved that I could 'out MacGyver' Mac Gyver.

Yes, that's me painting with my hair!  Only the finest Wappel Sable.  Very rare, as the beast can only be found on the South Side of Chicago. 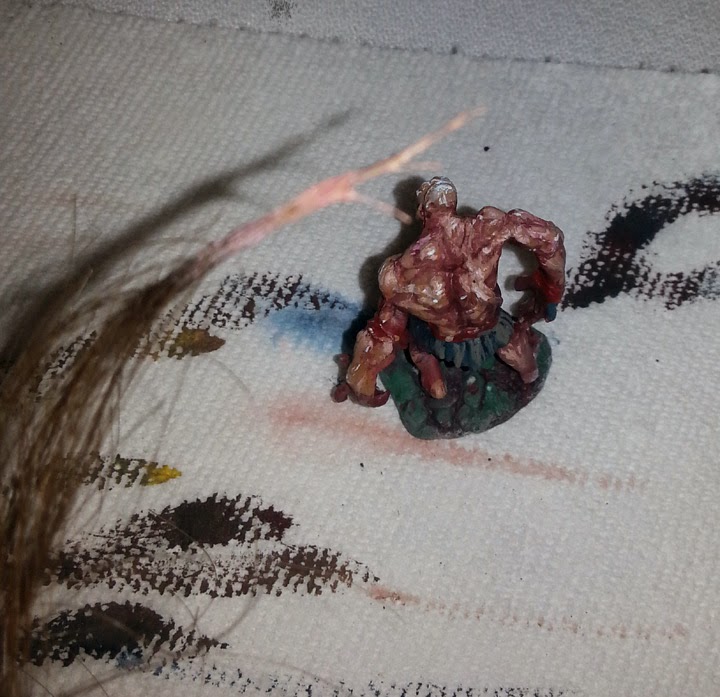 Here's a quick view of the awards ceremony.  Anne gets though all of them so quickly, but you don't even realize how rapidly it's moving, as everybody is having so much fun! 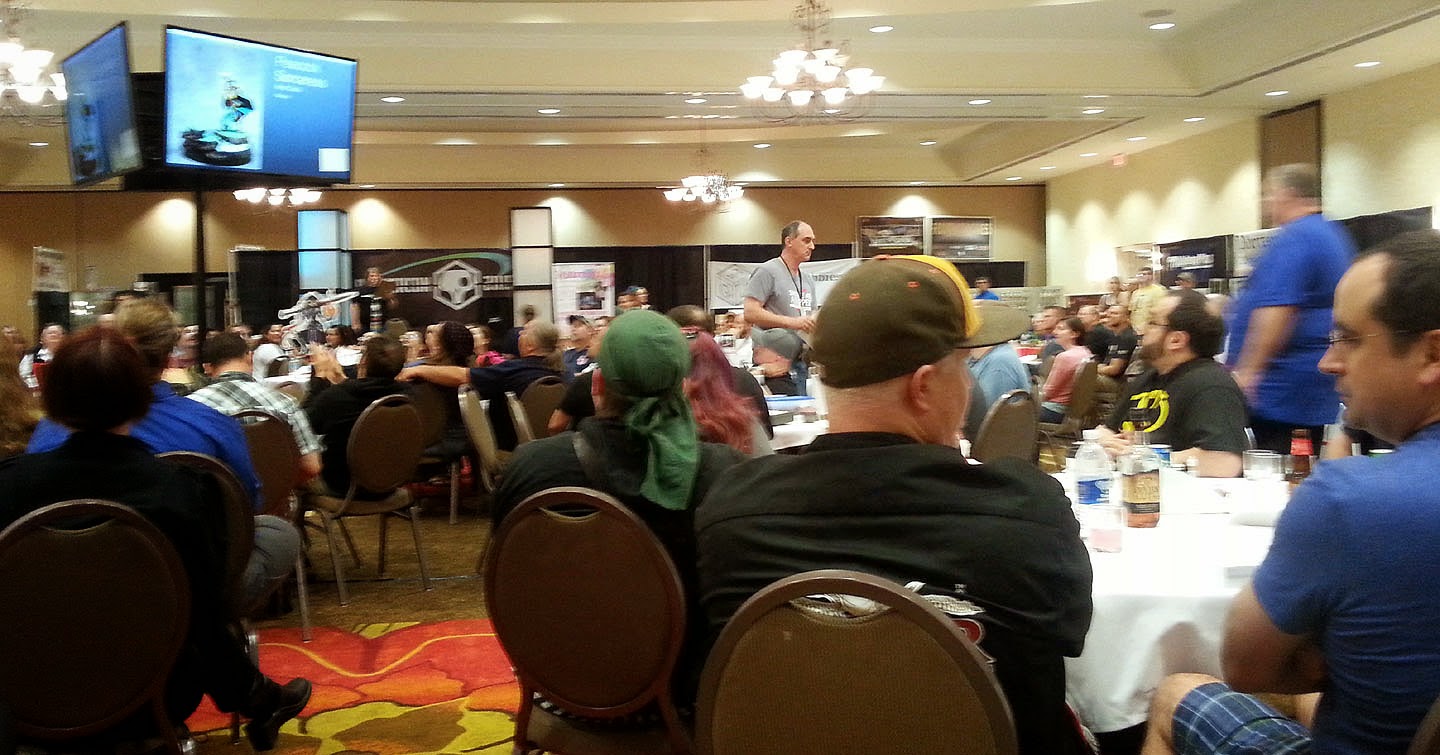 And from the good folks at Parallax, the entry that won a Gold in the Painter's Category.

More to come, including pictures from the Main Hall, and a field trip to Denton.

All of the Reaper folks were incredibly generous with their time.  I have said it before, but they were beyond amazing, staying with us late into the night, enduring long days at the con, at the shop, and more. 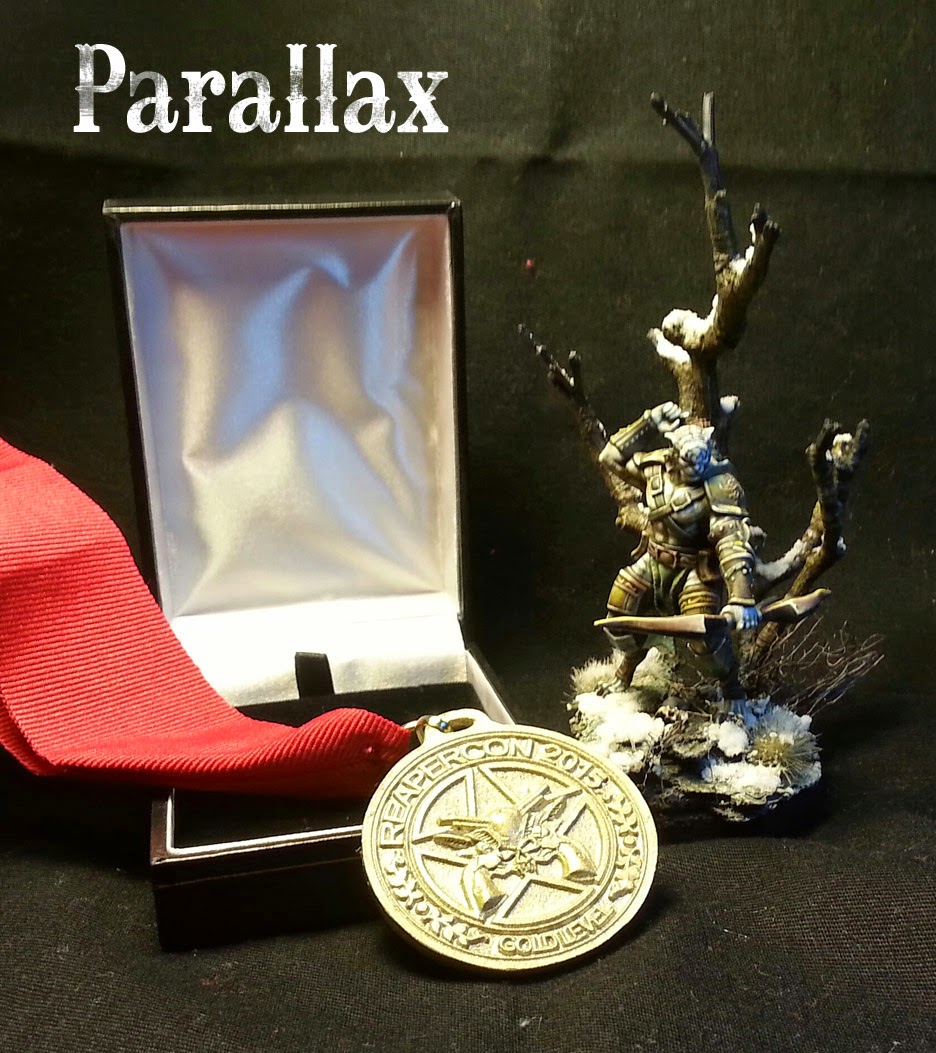 Posted by wappellious at 1:05 AM No comments: