Every ride needs a crew... and horsies. 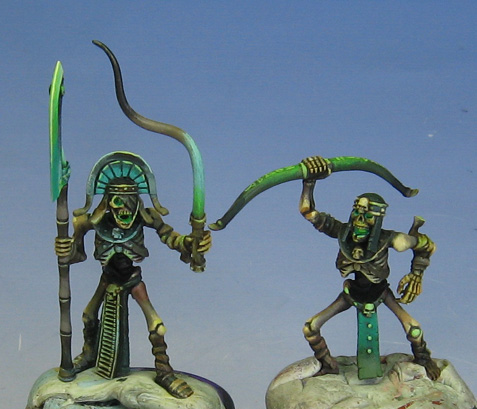 As I was working on the bases and movement tray for the chariots, I needed to work on the chariots themselves.

One of the chariots was originally intended for a Tomb Prince, so I needed to paint up a whole new crew for that one.  Also, a second chariot had a partially painted crew.

The first chariot unit that I wanted to make had 8 chariots.  I realized right away that it was not going to work at all, so I abandoned it.  I even took some of the chariots that were going to be used for this unit and converted them into my Khandish Axles of Evil (you can see the blog posts on how that was done in the LOTR section).

Anyway, I also needed to paint up some of the horses.  You can see that they were converted quite a bit.  I sculpted all the blankets out of green stuff with tin foil backing.  Here is a post from last year on the chariots, when it was a unit of six: http://wappellious.blogspot.com/2012/07/rolling-on-chariots-work-in-progress.html

Here's one of the chariots and the horses just about finished... 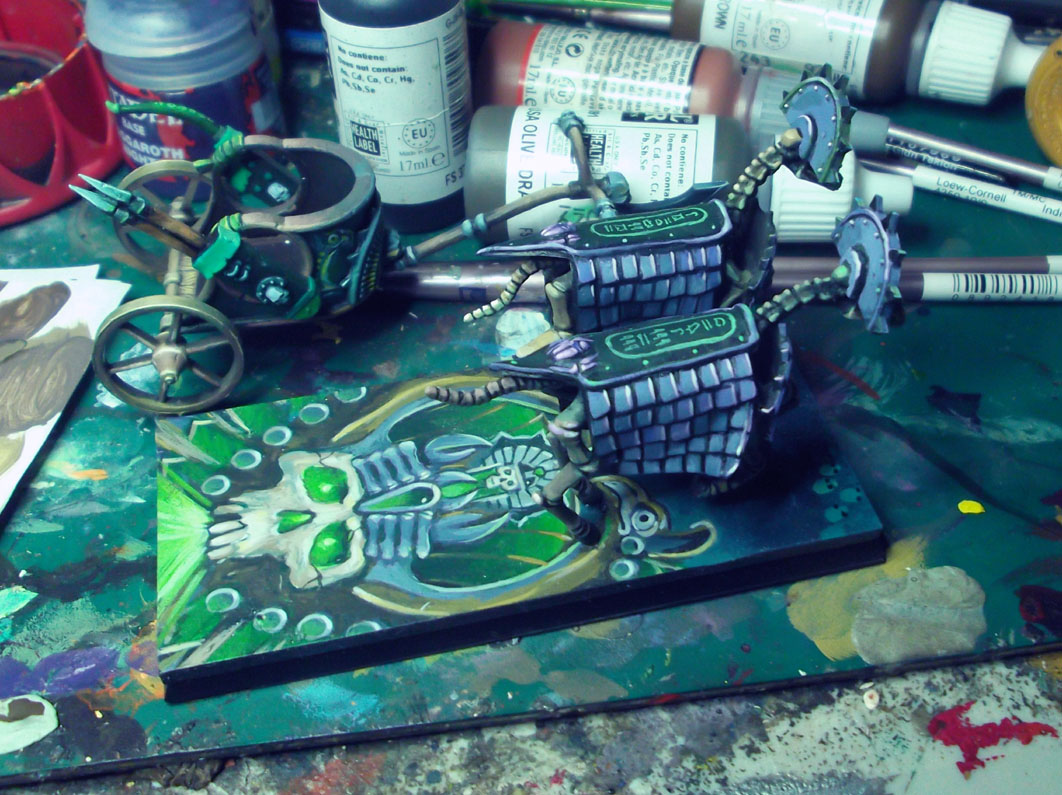 Now to get into the crew.  There was another chariot crew that needed a lot of painting as well. 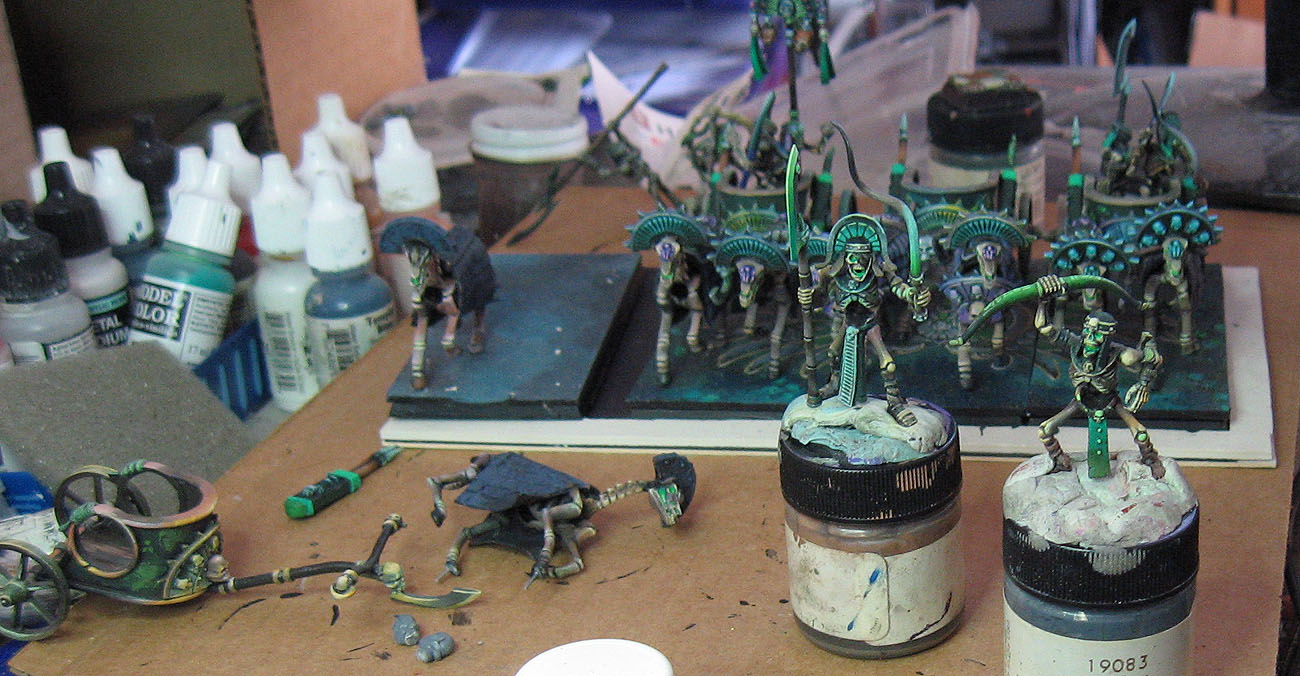 This image shows the crew that is replacing the Tomb Prince... 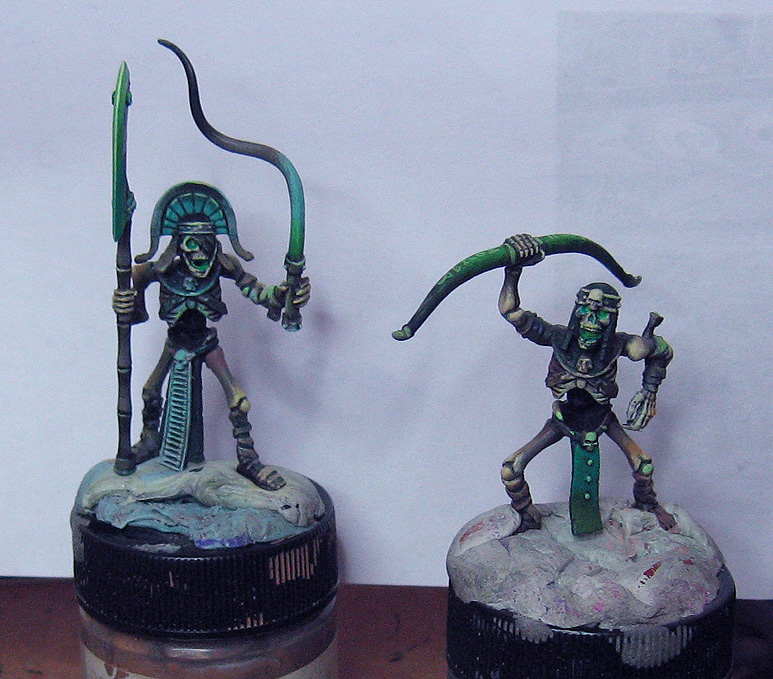 Some more work in progress shots... 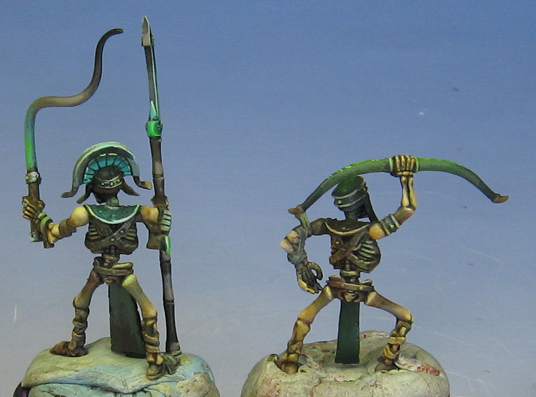 Posted by wappellious at 9:20 PM 3 comments: 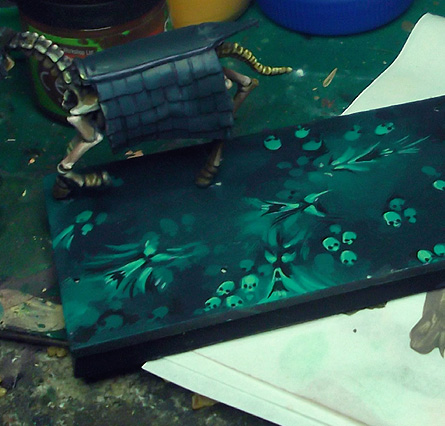 When I reworked the WFB tournament list for the millionth time, I realized that I was going to have to go back to the chariots, and not the massed horsemen units I had originally planned.  Time and other life circumstances got in the way.

So, I substituted a unit of chariots instead.  Then I realized that not only was there no movement tray, the unit was not even completely painted!  I had abandoned the unit when I saw that it had no chance of being effective.

So, this was the state of the unit and the movement tray when I began: 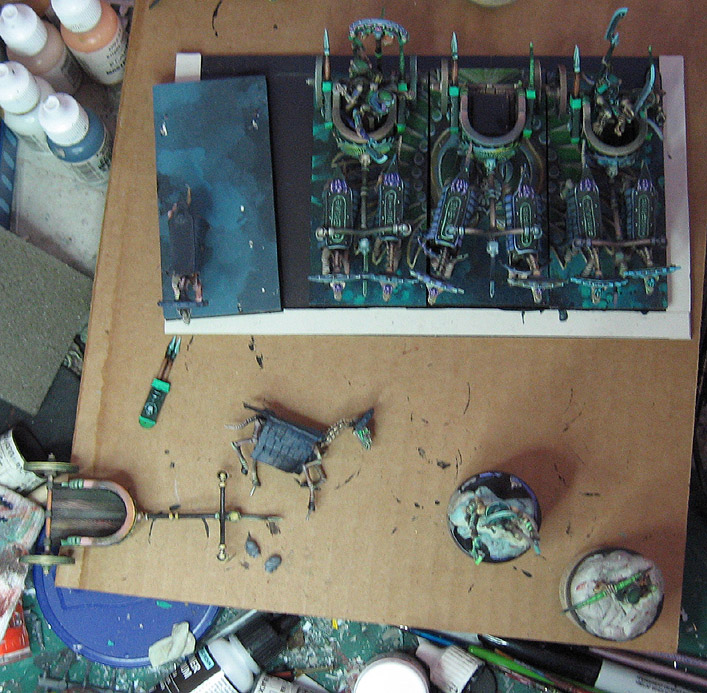 First things first.  Finish the bases!  This is not so horrible, as it is one of the designs that will be featured in the "Painting Demon Marble" video.  It was my intent to get back into these to practice, so here we go!

I started out by taking the Vallejo Dark Sea Blue and Emerald to establish the light and dark areas.  I had to go back to some of the other bases as well, just to tie everything in a little better. 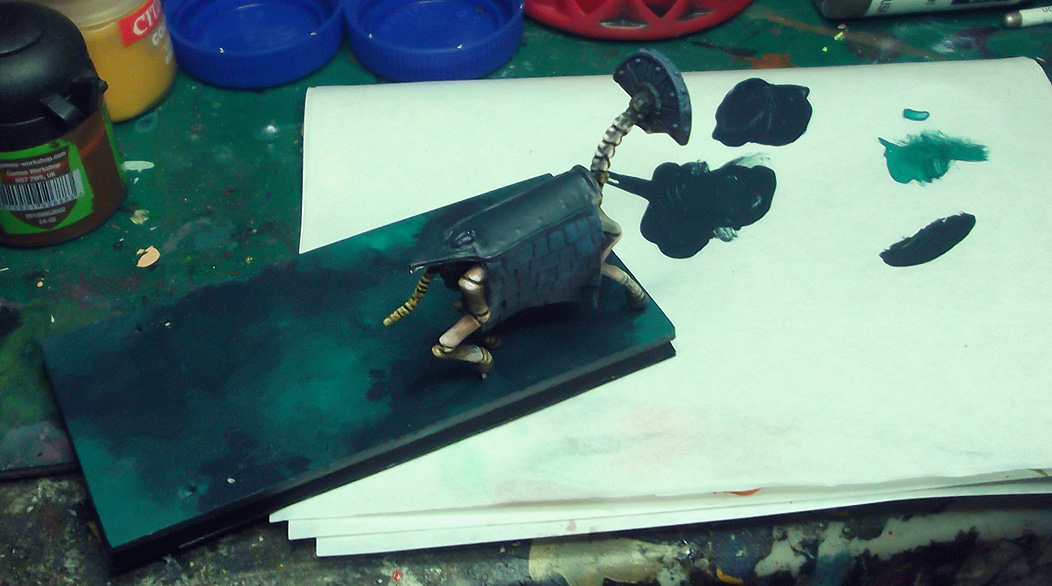 You can see those colors out on the palette.  I used the Emerald (with a touch of dark color) to lay out where the skulls and demon faces would be. 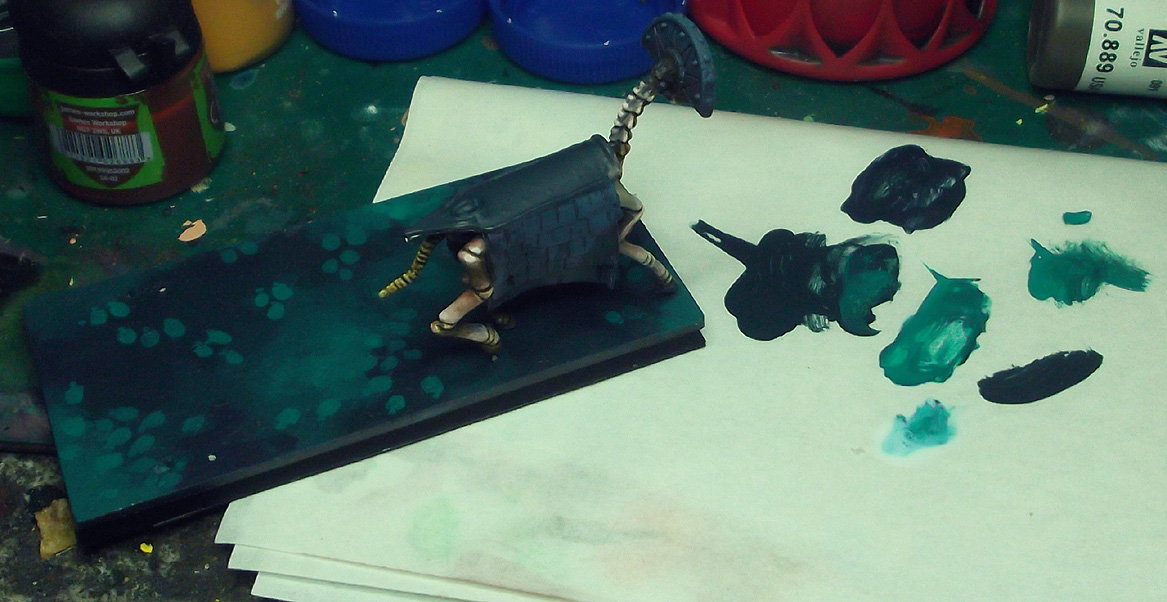 I began to lighten those skulls a little bit...

And then some more...

Now they are ready to have the eyes and other dark colors established.

I mixed the Dark Sea Blue with some dark purple, and marked out the eyes on the skulls, did a little definition of the demon faces (the mouths, etc.), wth some more definition on the darker skulls as well. 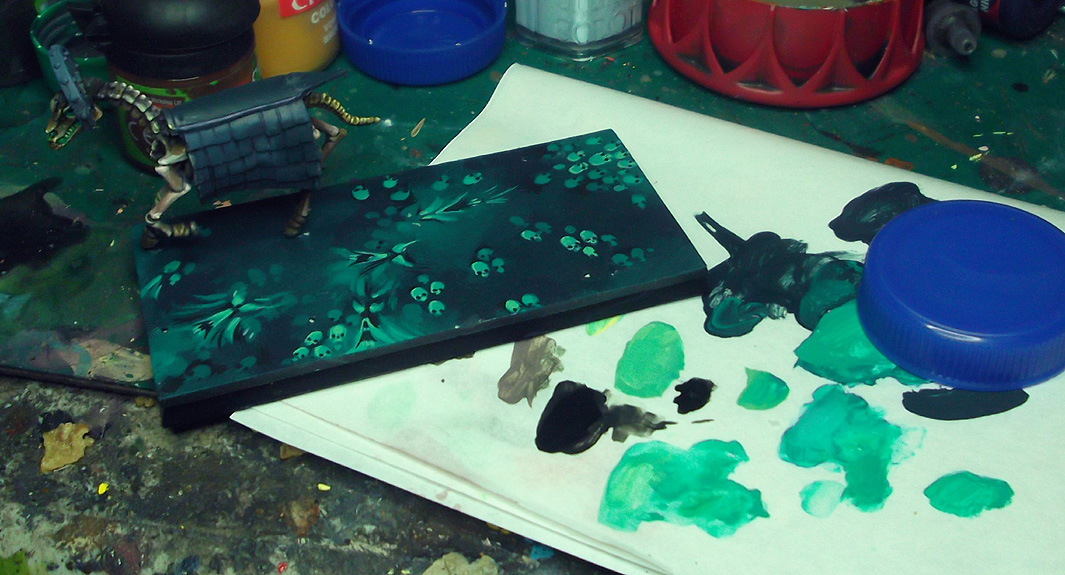 With the bases painted, it was time to do the movement tray.  The inscriptions describe what will happen to all those who violate the Tainted Pharaoh's Tomb cities... 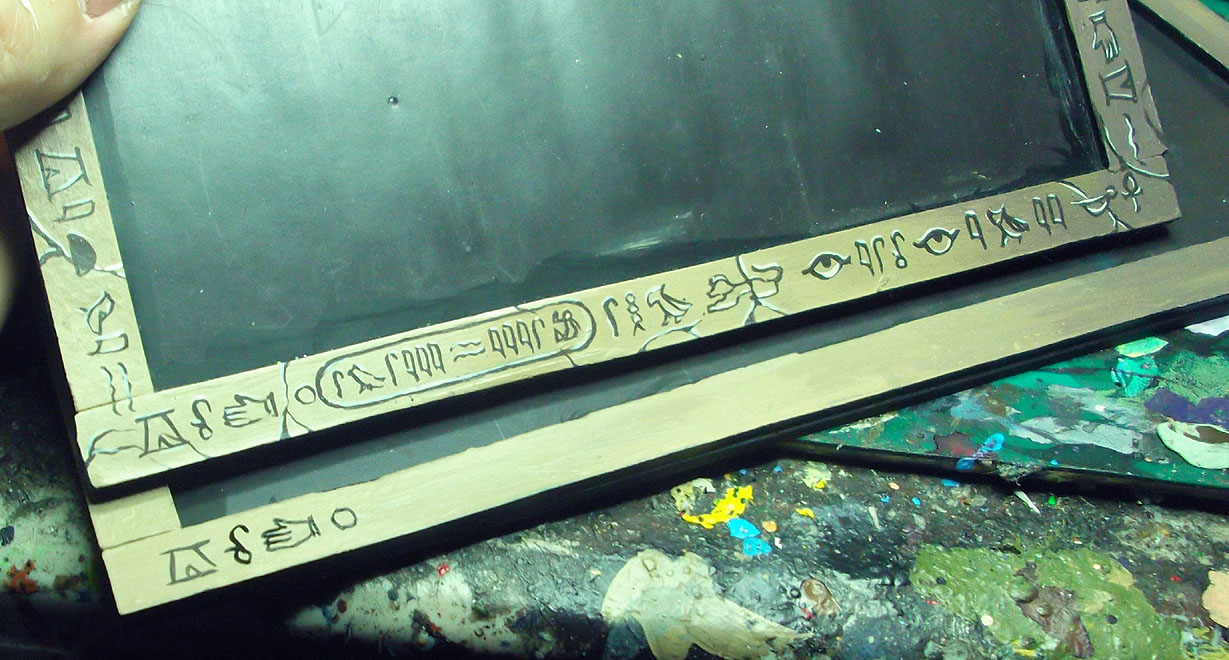 You can see numerous posts with the story of the army, how the display board was made, the various units which were scratch sculpted, and even how these movement trays were done in the Tomb Kings army section of the blog!  Go check that out if you have not seen it yet. :-) 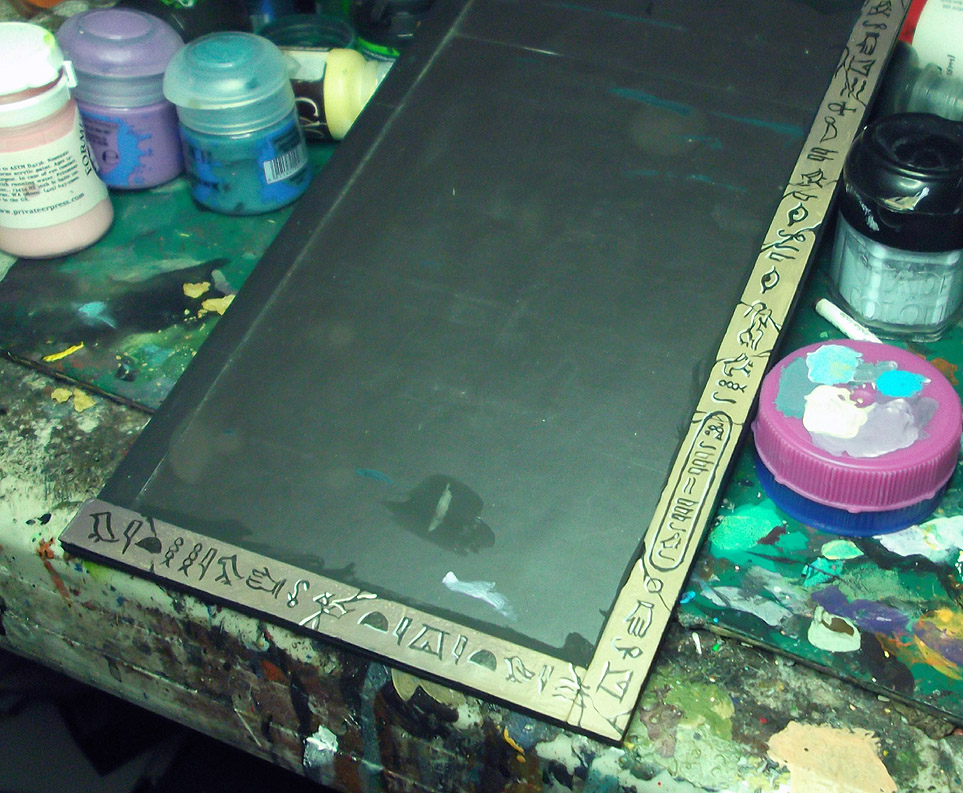 Here's an updated link to the finished unit!
http://wappellious.blogspot.com/2013/04/the-finished-chariot-unit-ready-to-roll.html