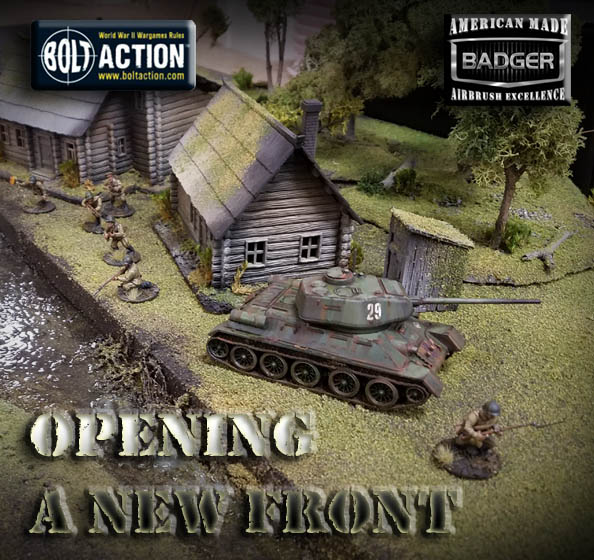 A few weeks after making those terrain stands that you saw in yesterday's post, I finally had a few hours to put foliage on them!  That process was very similar to how I made those original "swamp" style trees, but with more precision and strength.

I was able to place the spray adhesive far more effectively, and in smaller areas, concentrating the amount of glue into a limited area.  Also, I had learned that I could use almost any color of moss, because it was all going to be covered with various shades of flock! 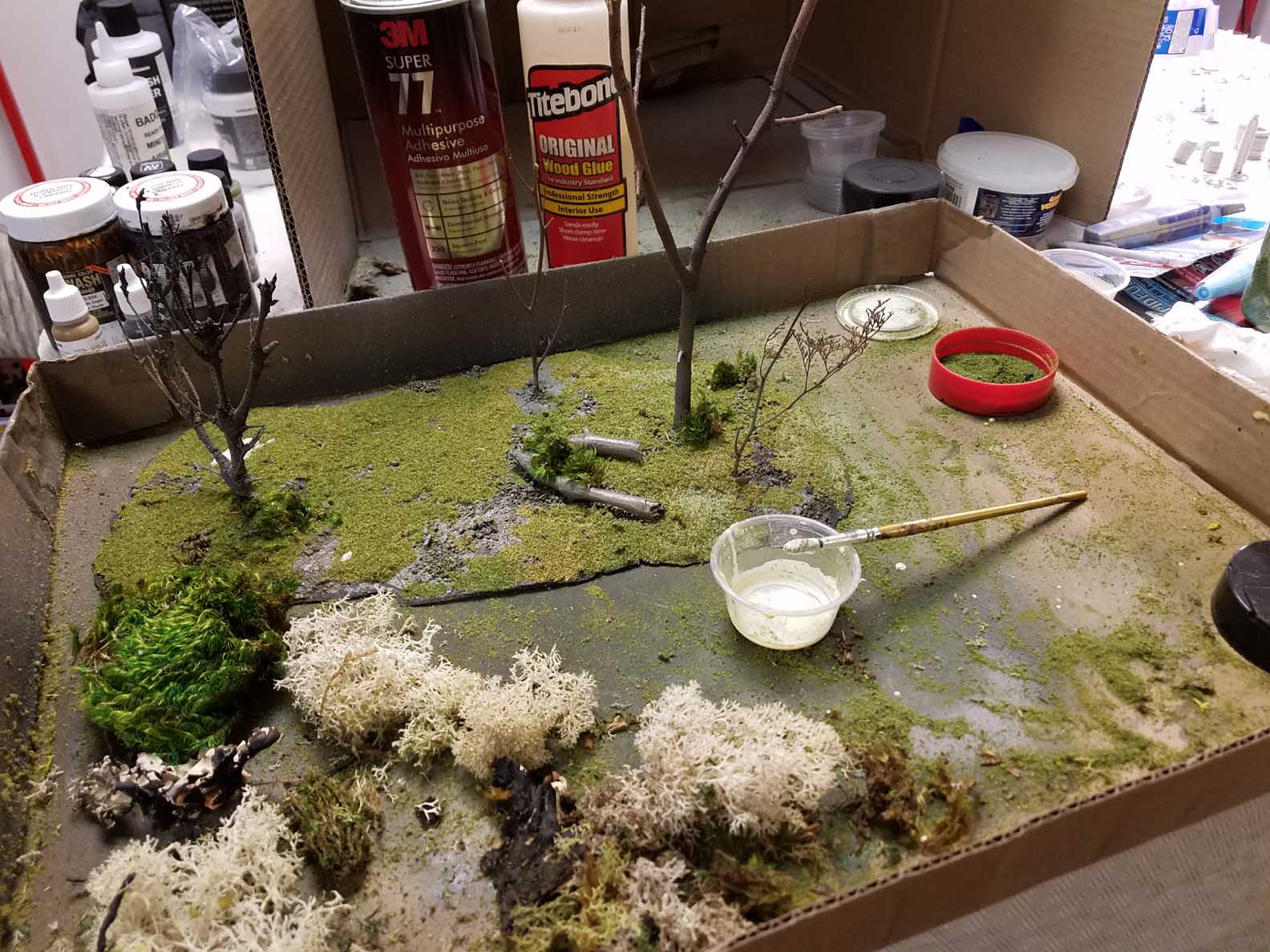 This method not only created a better appearance in terms of color and shading, but it created a "leaf like" texture that was far better than anything I had been able to do trying to stick clumping flock to plastic trees. 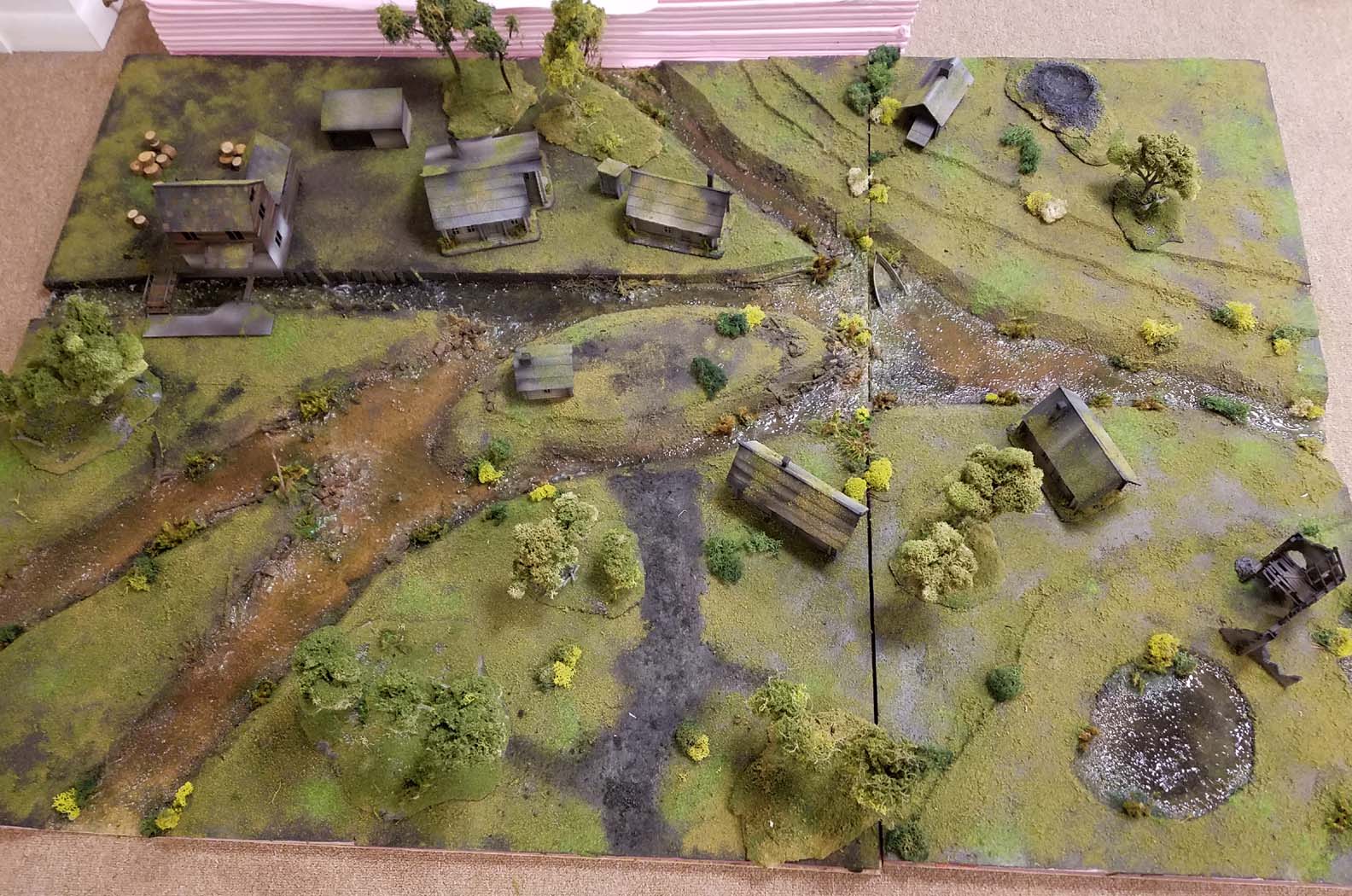 Using the natural tree branches meant that each one was unique, and would not have that obvious plastic tree shape. 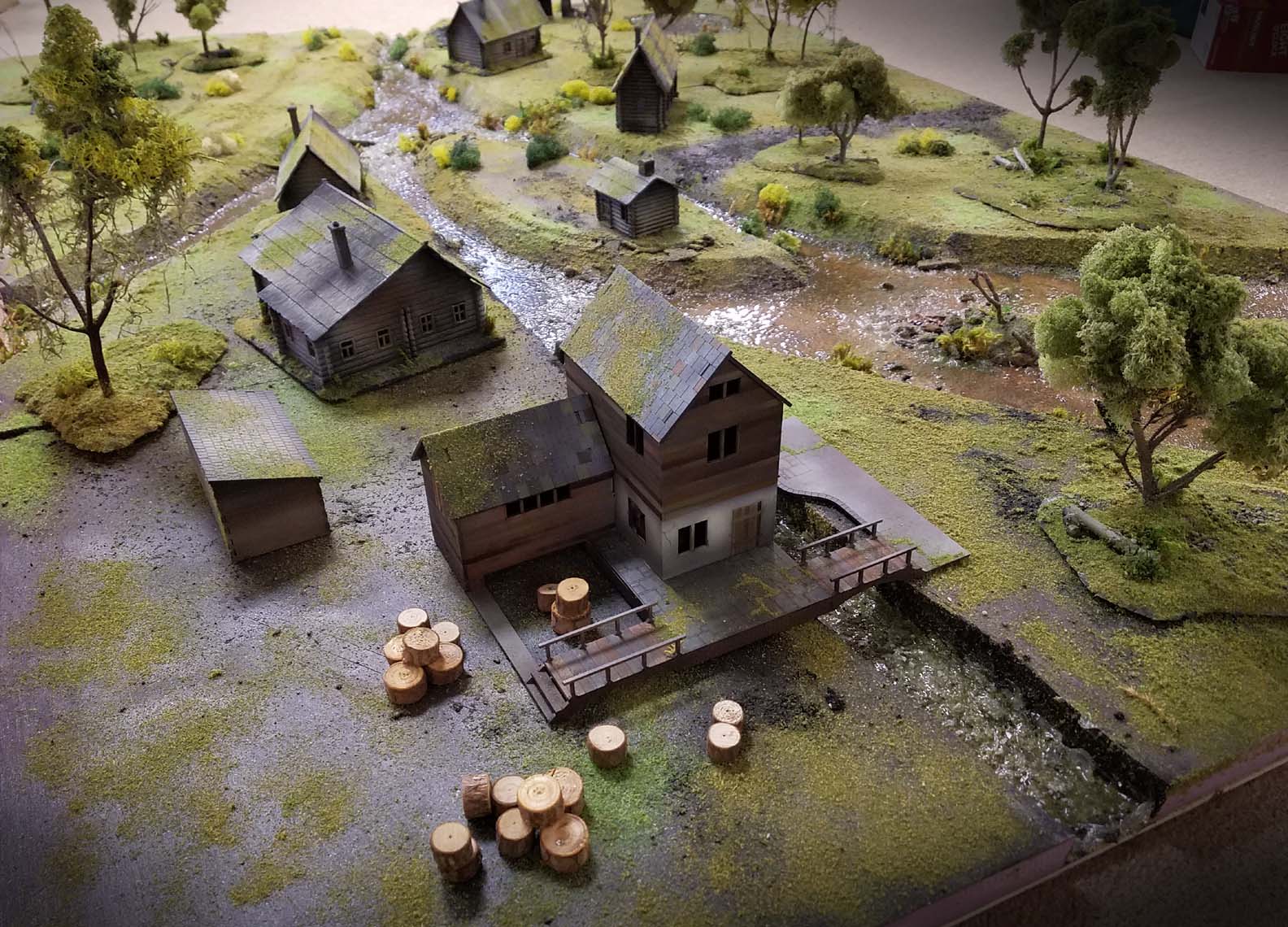 In Bolt Action, you really need to know the exact outline of the forest zones.  With this method, you get a clearly defined edge, but from a view like this, you don't really notice the isolated sections one bit!  It creates a very nice panorama. 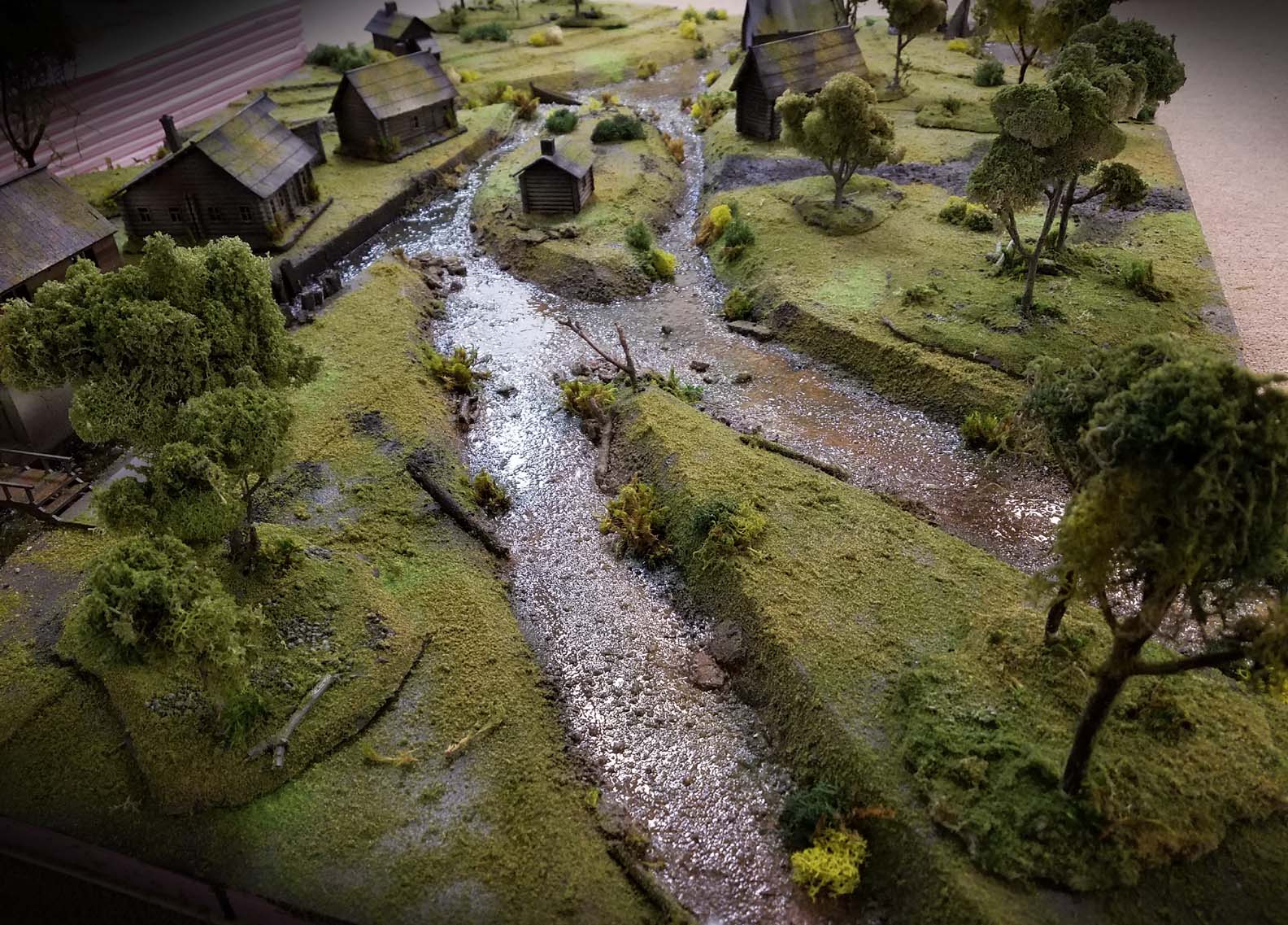 Even now, I have some new things that I want to try out on the bigger trees.  That would be to glue some of the dried foliage pieces from the craft store onto the larger trunks.  You have seen those be used on my bases, but I feel like adding those extra "branches" will make the tree canopy stronger, and add realism too! 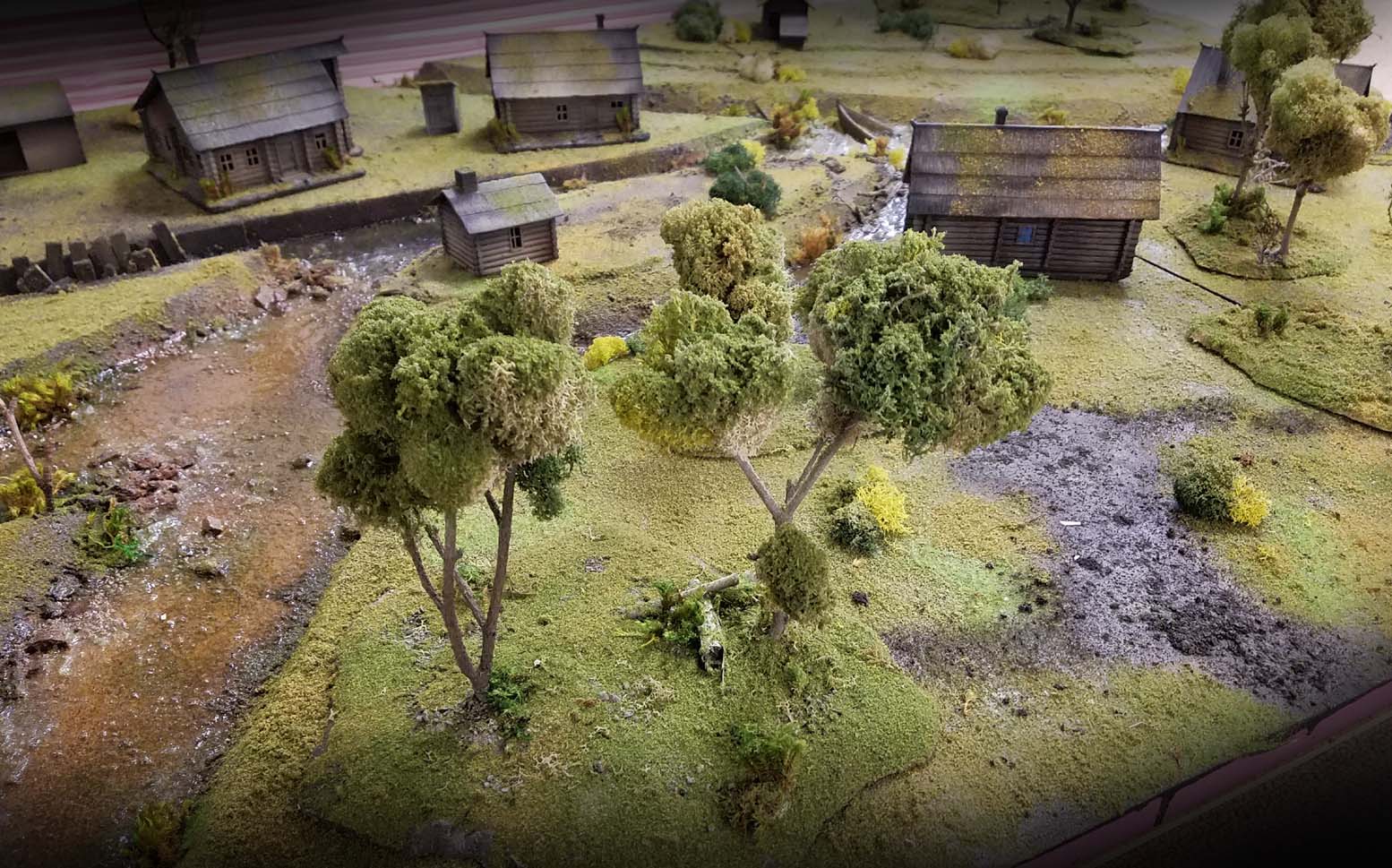 We can still have our swamp board, which will mimic the huge Pripyet Marshes that dominated the landscape of western Russia. 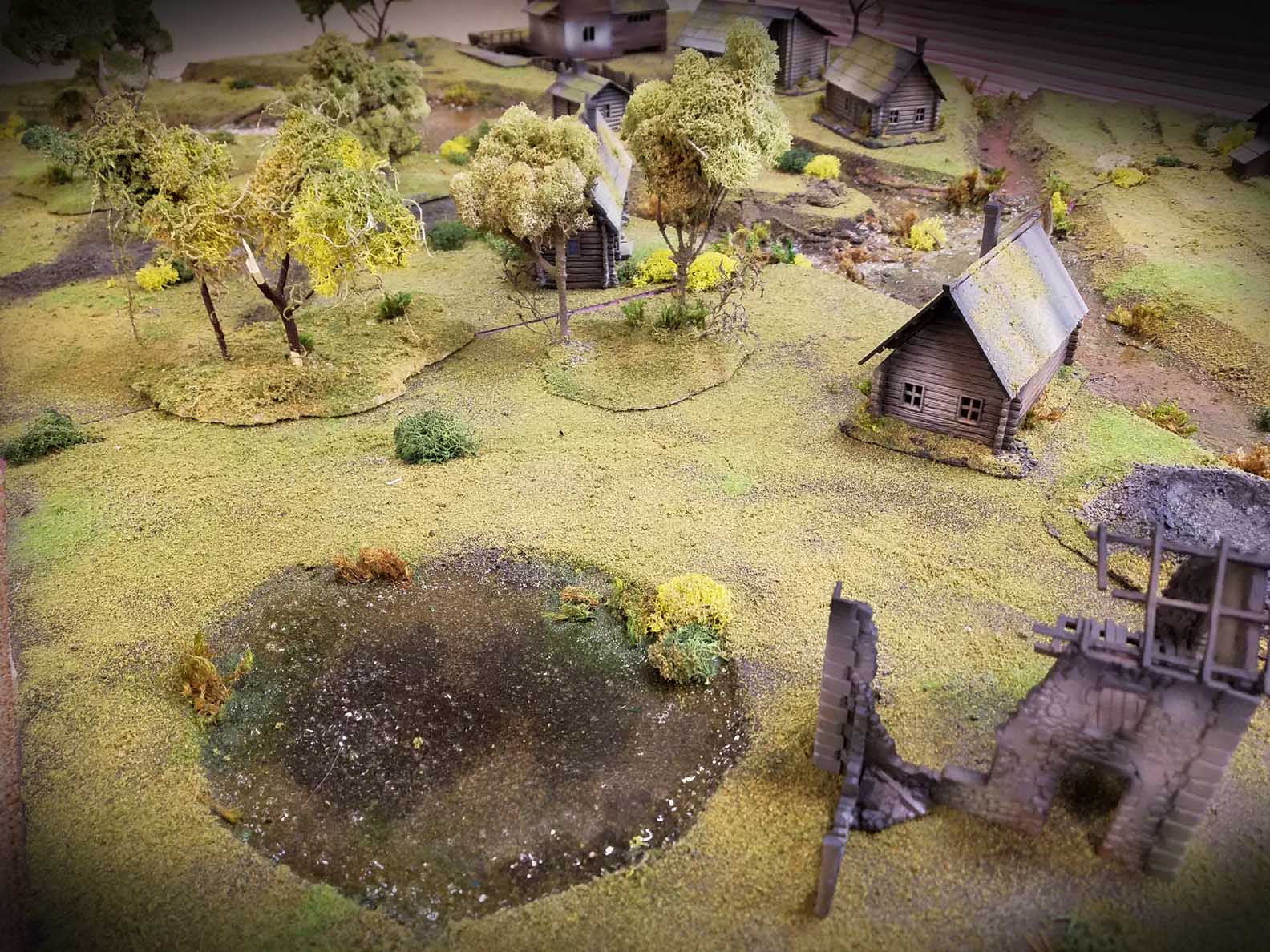 Between the very rustic buildings, the rivers, and the tree stands, this should be the most realistic and challenging board that I have ever played on!  The idea was to match the very difficult terrain, with poor roads, few bridges, and other rough terrain. 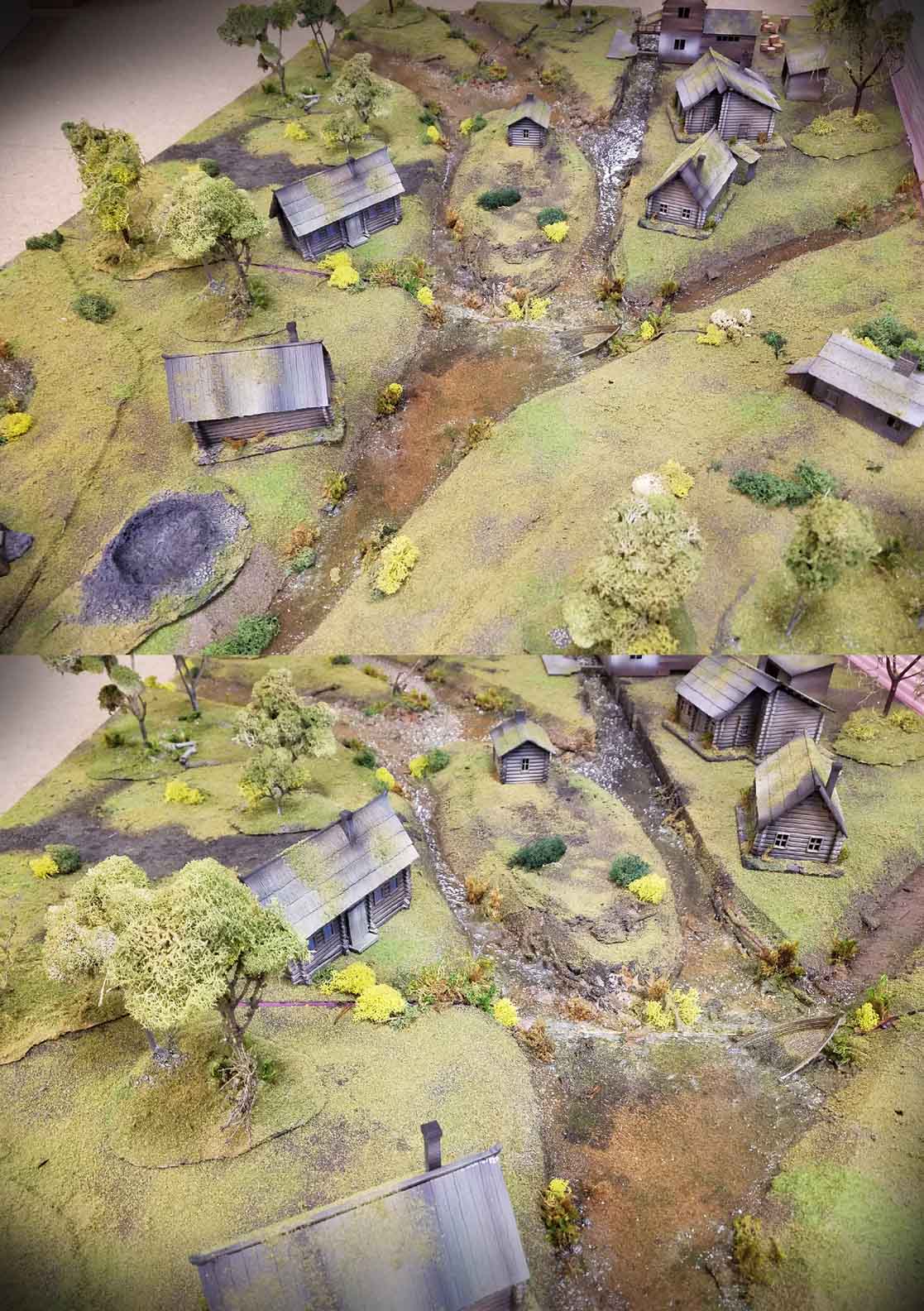 Roy was VERY happy to see his first completed squad of Soviets hit the table.  They blended in so well with the terrain, it was actually quite difficult to see them when it came time to put those guys back in the box! 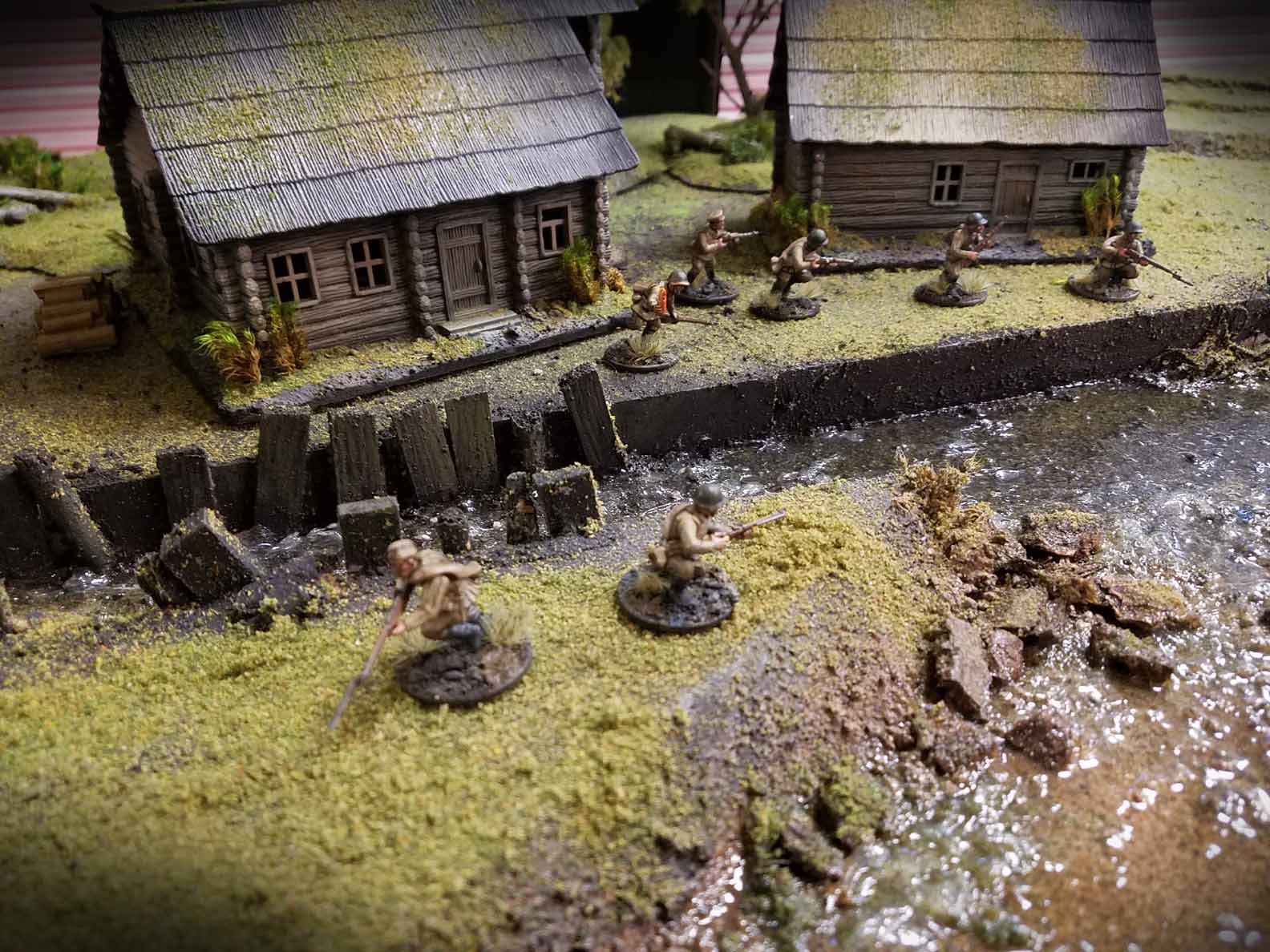 We got the T-34/85 painted up quickly, and that just had to join them on the table as well. 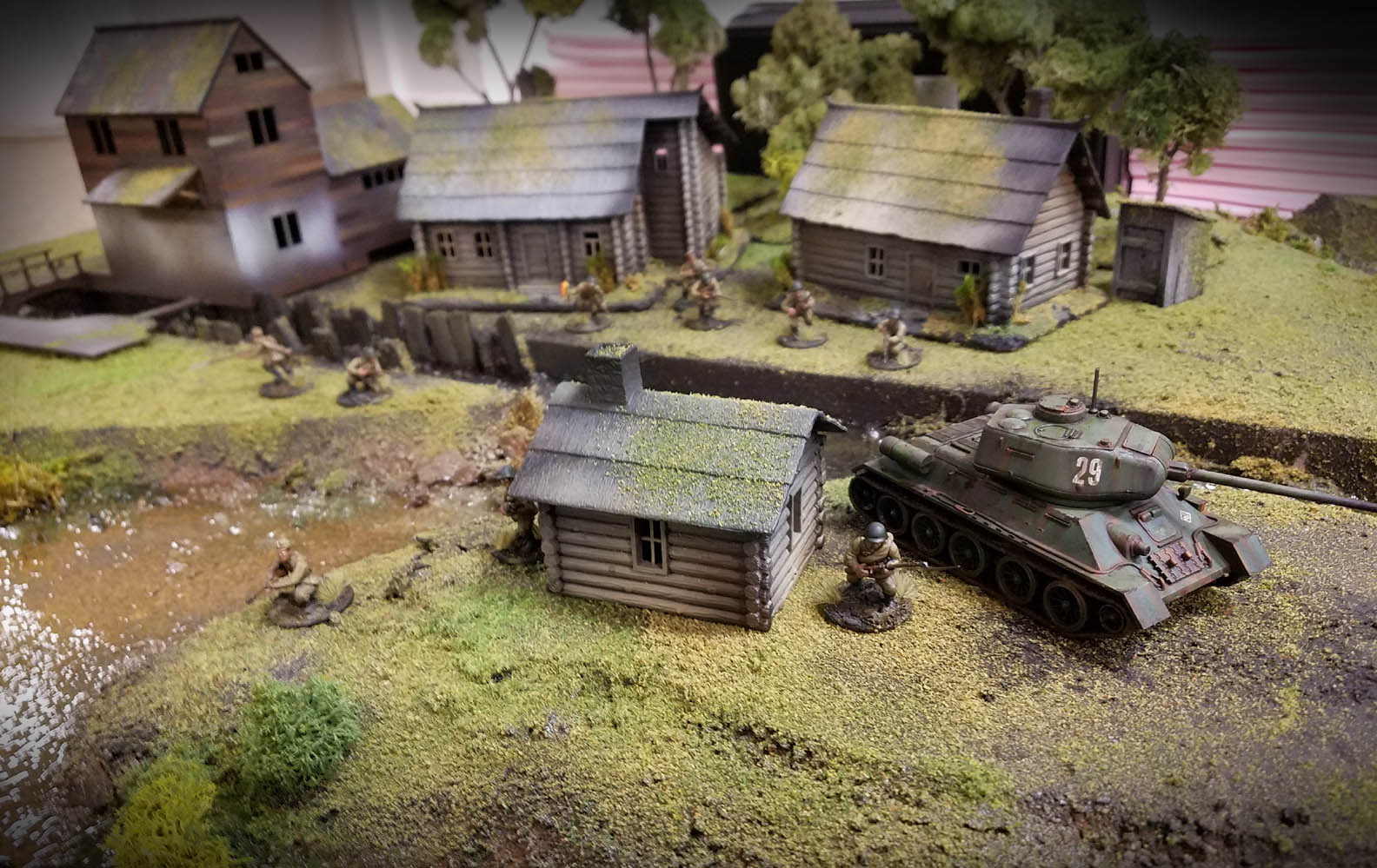 Once Gencon and Nova have passed, all the units will have been painted, the final terrain pieces made, and then the Eastern Front campaign shall begin!!! 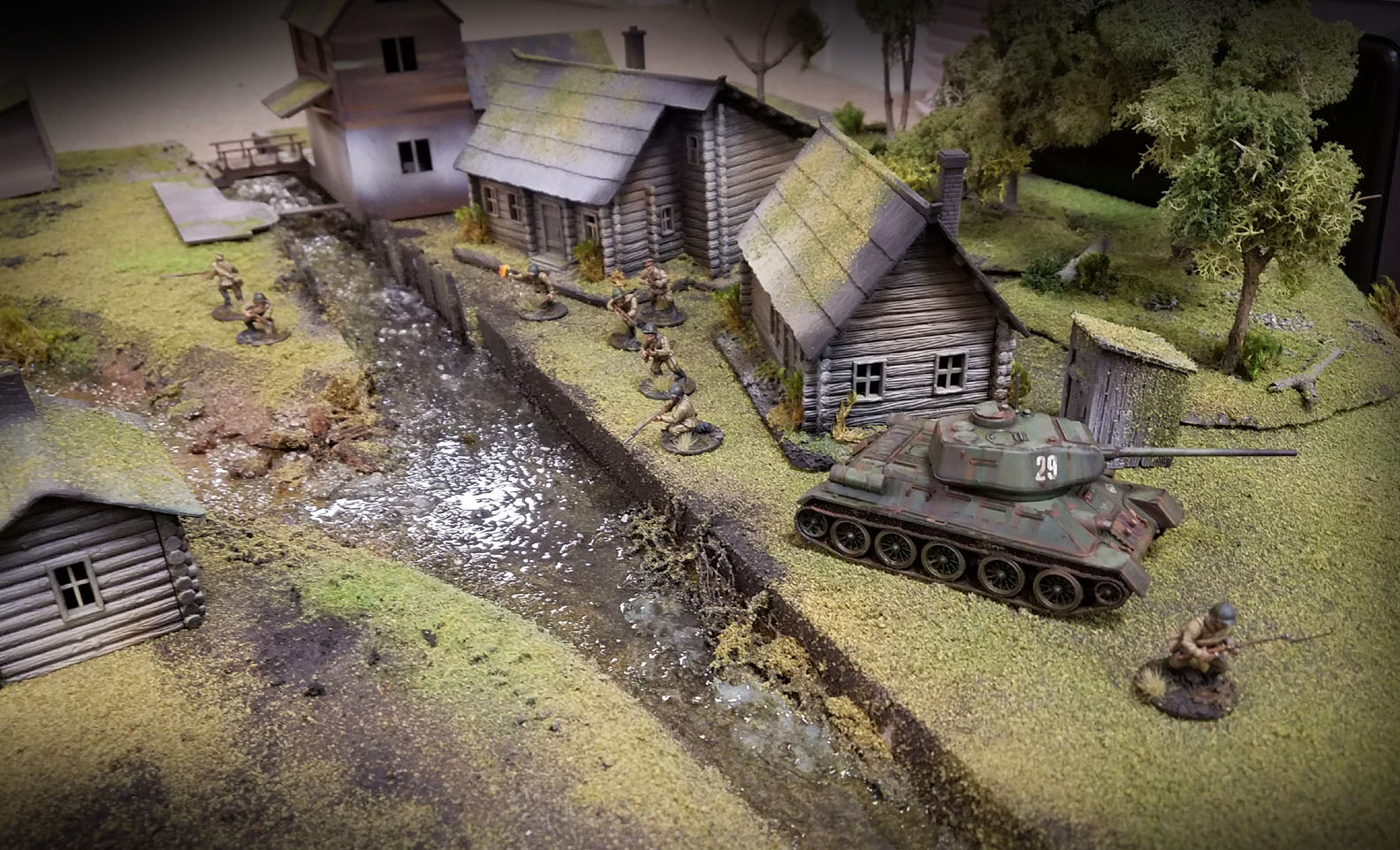