Have Club, will Travel 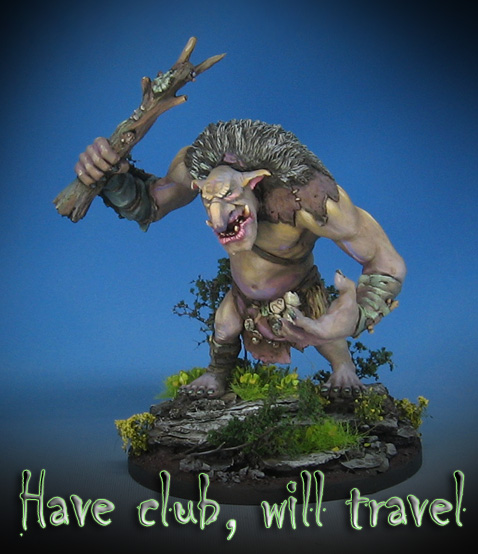 I am not sure who makes this figure (my guess has been Mierce), but it was an interesting one to work on.  With larger, open areas of exposed skin, I could try a few subtle color combos to make those places more interesting.  That meant including purples, blues, greens and so on alongside the warmer tans and peach tones.

While this was in effect a "limited palette" exercise, I used a full range of colors to make sure that some reddish colors were more or less saturated.  As I always say, contrast is not just light vs dark, or even opposite colors.  Temperature contrast and saturated vs grayed down colors also counts as contrast!

I think you can see in one of these images that the branch he is holding actually has a nest at the top, with eggs spilling out!  That was a hilarious touch, and there is even a bird sticking its head out of the branch.  Very cool!

Since I knew that I would be adding plenty of green foliage added to the base, I had to account for those colors while I was painting the figure.  You can see how the greens contrast against him, especially where the darker greens make the lighter skin tones stand out a bit more.

Posted by wappellious at 1:13 PM 4 comments: