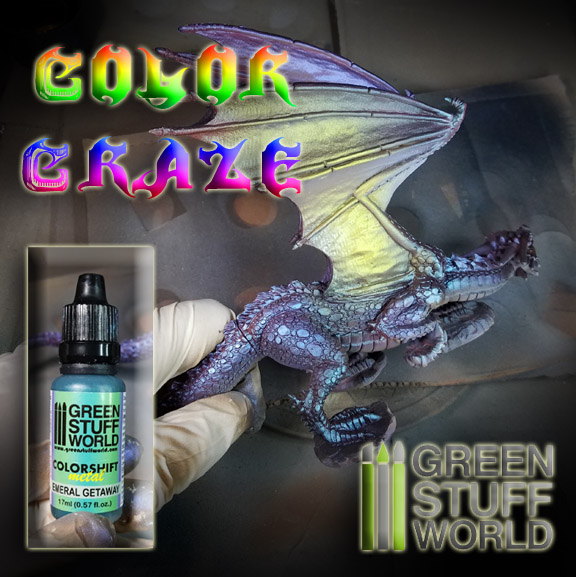 Since I constantly mention that one should constantly experiment with various materials, styles, and techniques, it was time for me to try out something very new!  This would be the brand new color shift paints from Green Stuff World. 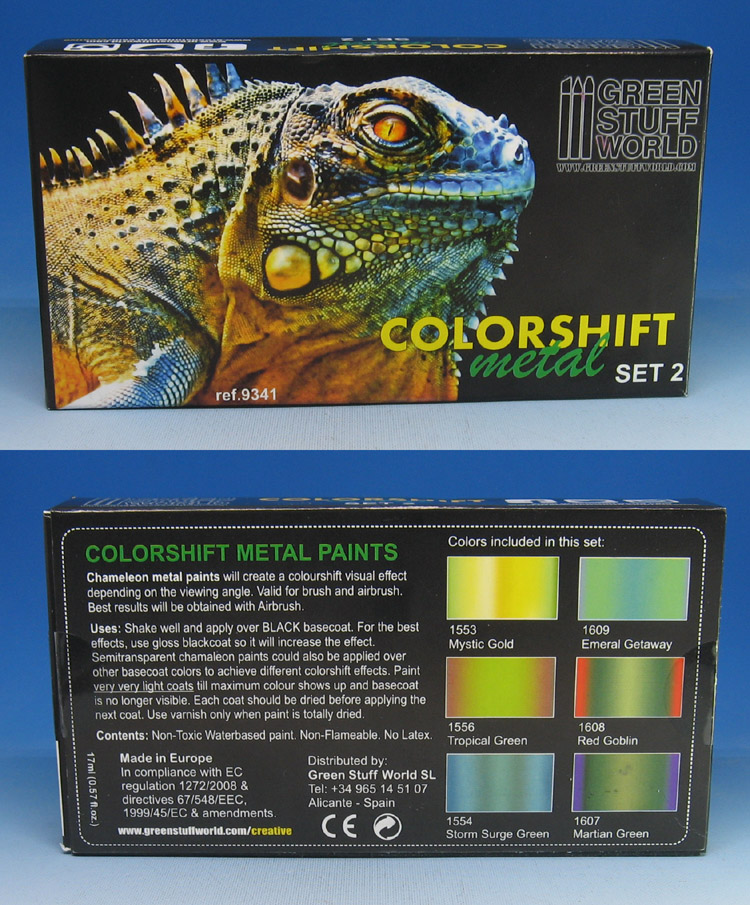 There are two sets, each with six jars.  You have a nice variety of lighter and darker tones, as well as yellows, reds, purples blues and greens! 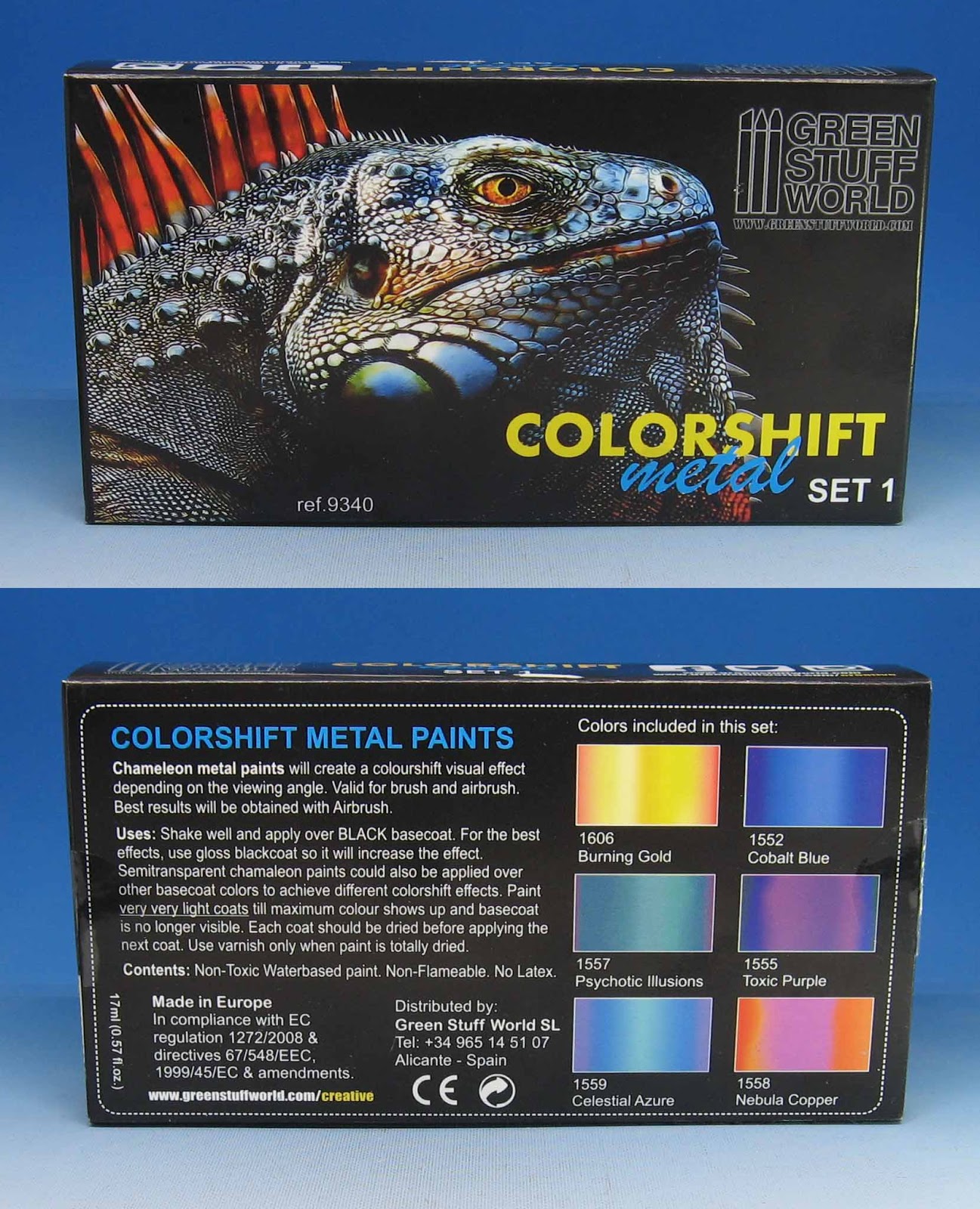 I have a few things under way that I thought might be interesting testing subjects.  On the fantasy side, I had this Reaper BONES dragon, which had been used to show how to work with Badger airbrush primers at Gencon.

While the recommended underlayment is to have a gloss black, I wanted to see what might happen with something that was already shaded and tinted.  The dragon was a sort of burgundy, with a sky blue belly and other reddish accents. 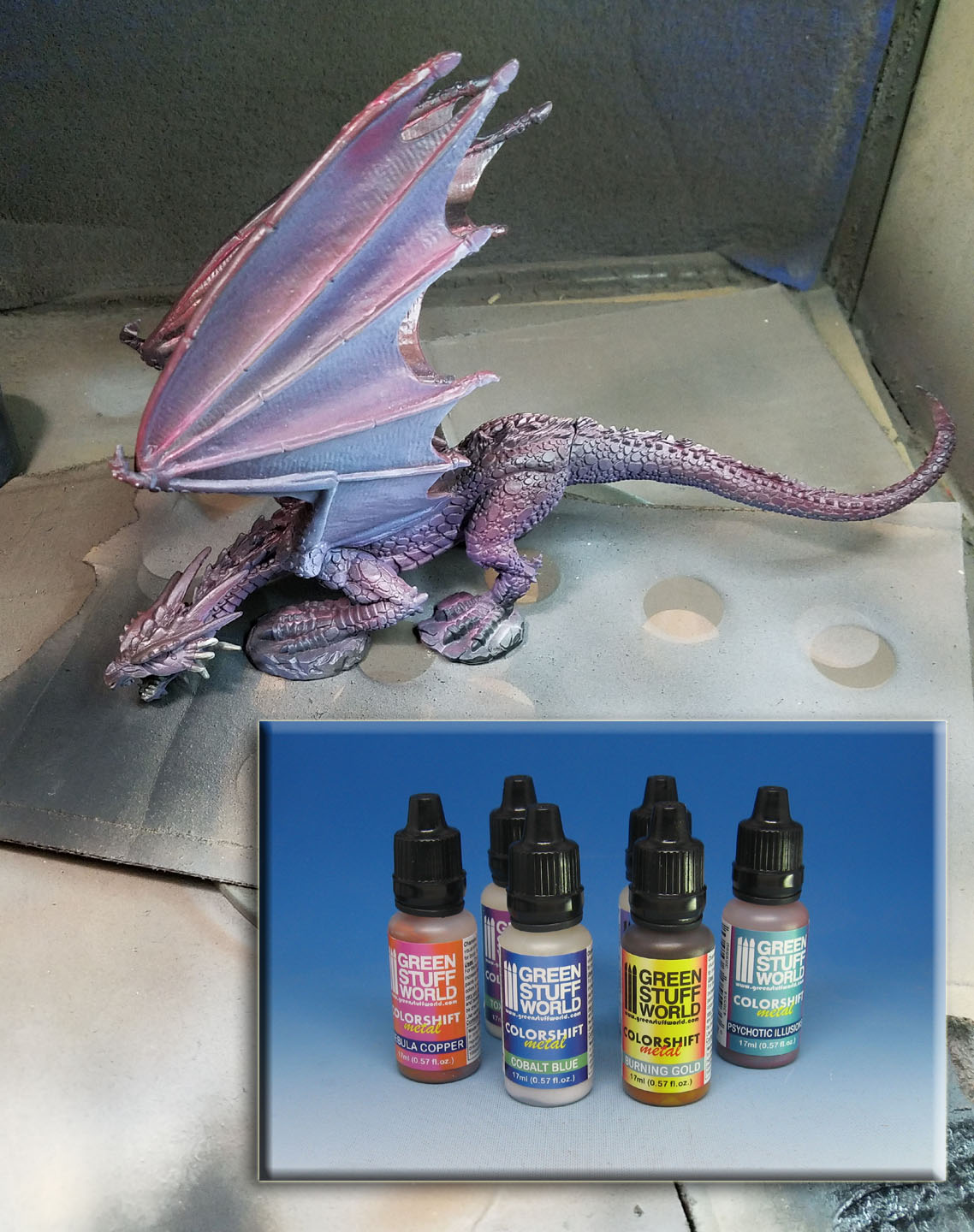 While this would probably affect the color shifting properties of the paints somewhat, I wanted to see right away if it was possible to keep the sort of "pre-shading" that I have been doing with the Stynlrez primers.  While shifting colors is a neat effect, there still has to be some semblance of lights and darks to show shapes! 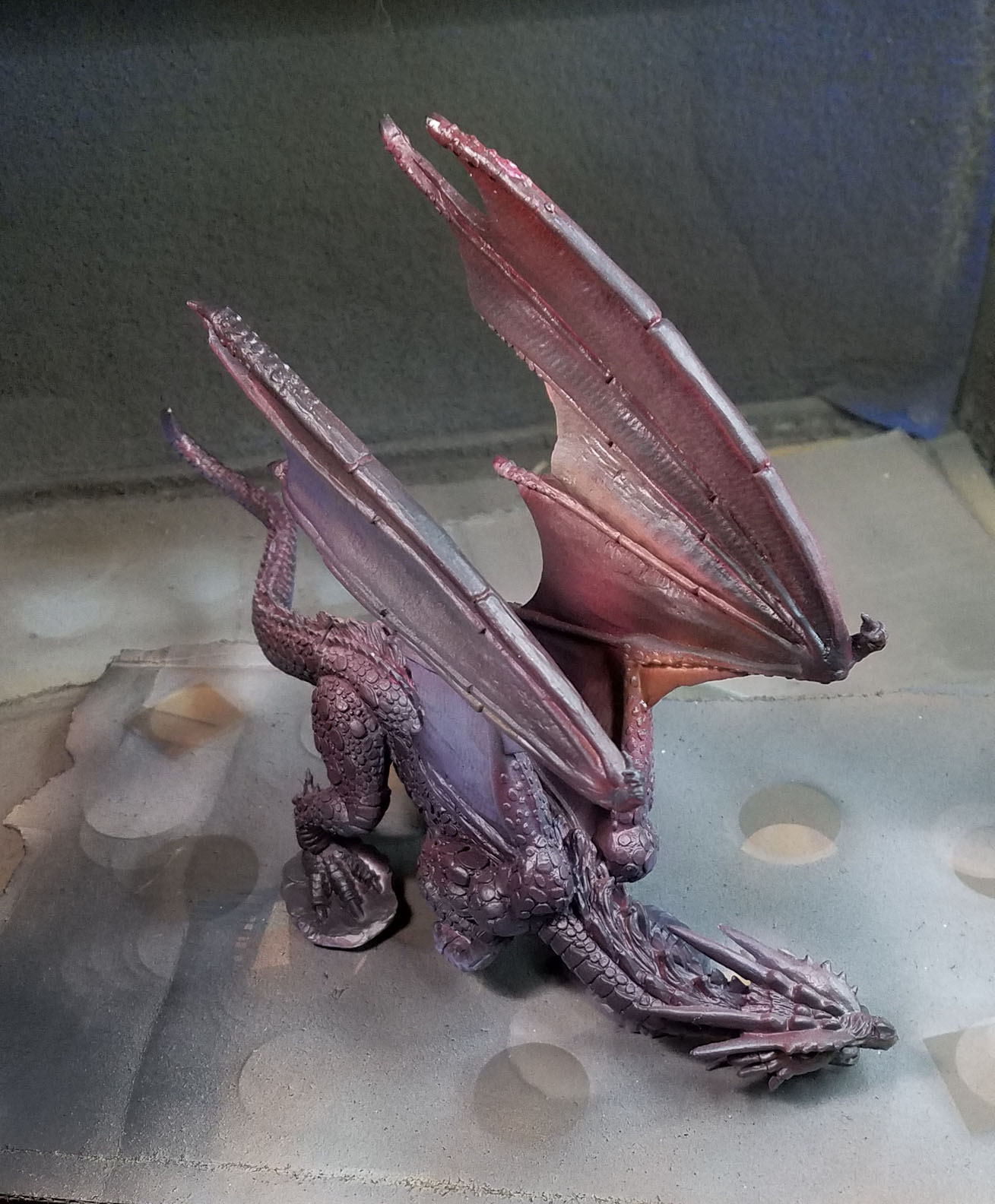 The first color that I tried was the cobalt blue.  Like any paints, you will want to shake them up very well.  Also, you have to get used to the milky white appearance the paint has in the holding cup.  It is not "blue" right out of the jar, hence the color shifting property.

While you can use these with a standard brush, GSW says that an airbrush is a little better suited to this paint.  I was using a standard Badger Patriot 105, and this paint shot through it just as easy and any Stynlrez primer, which made me very happy!

I didn't want to have to thin it or alter it an any way, because that has had adverse impacts on craft style paints of this nature.

You can get an idea of how blue it can get in the blurred image behind the paint jar... 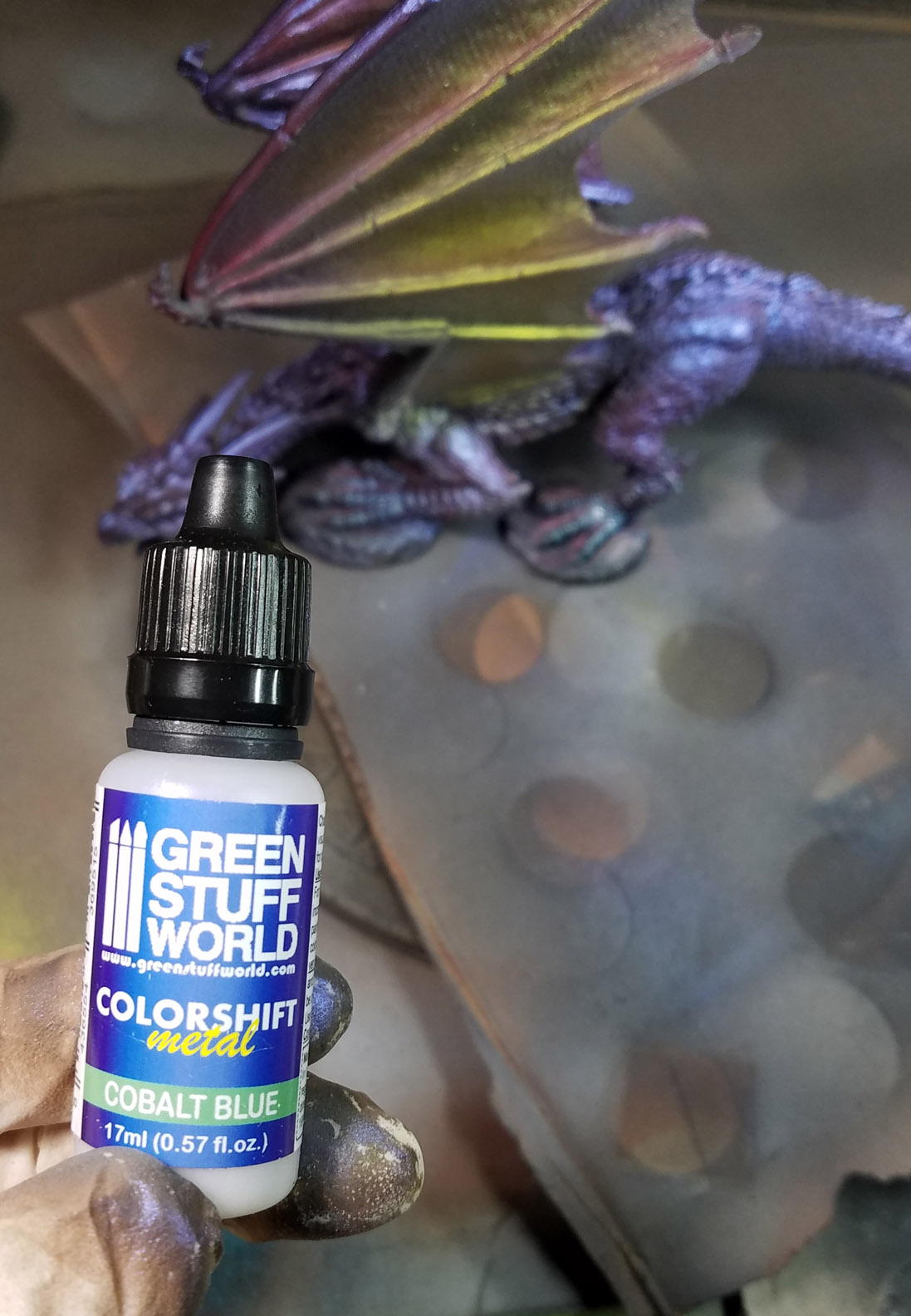 For the lighter underside of the wings, I tried the "yellow" color shift.  The original underpainting was a light blue, so I thought there might even be a hint of green, as well as some light and dark shades.

I think that having the pre-shading does indeed help to provide a bit more shape, even if it does alter the effect from a recommended gloss black backdrop. 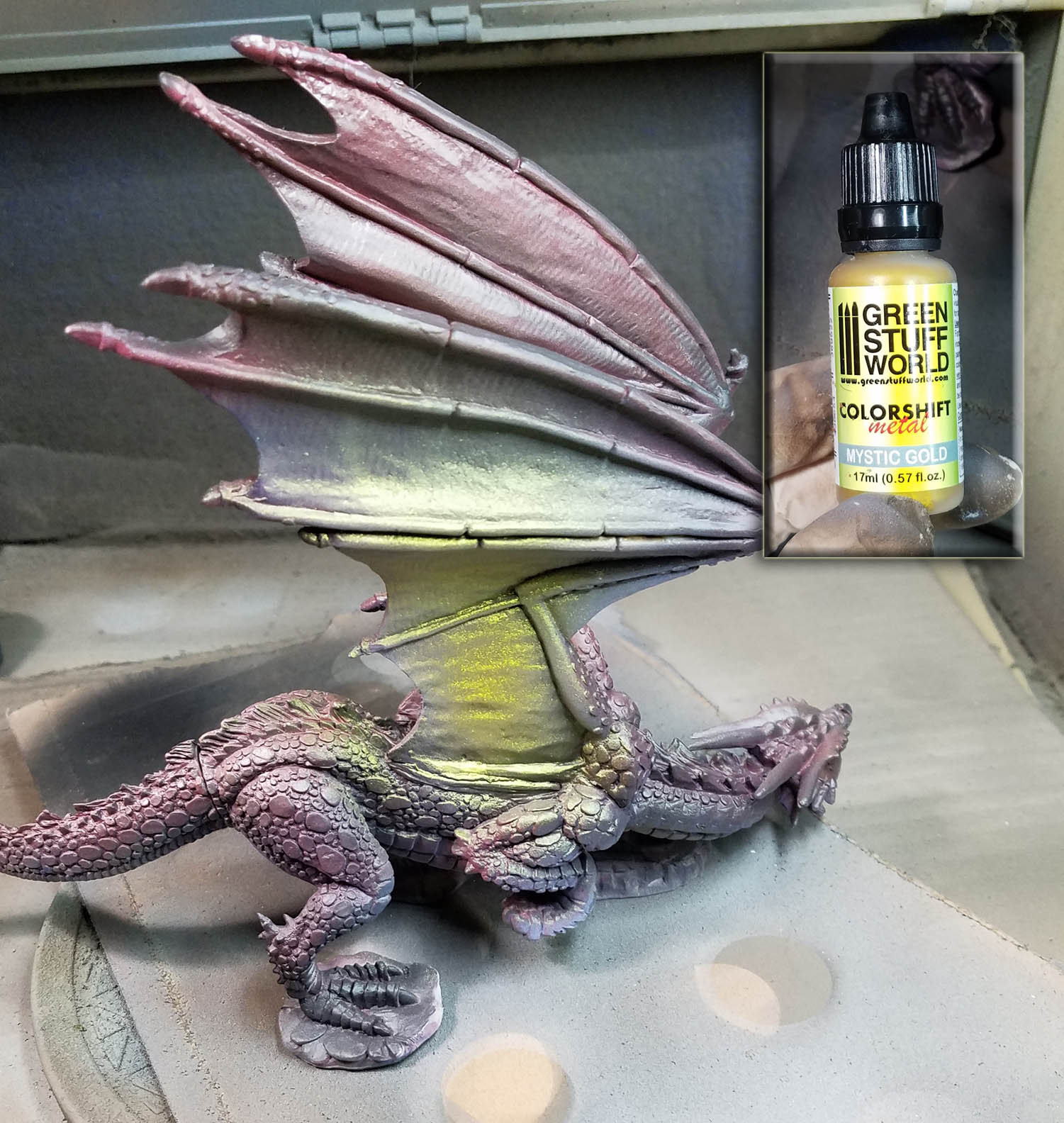 I think these images give you a better sense of that shading.  Keep in mind that I am not masking anything, and I have not done any kind of glazes or washes over these.  There was a very limited time to try these out last week. 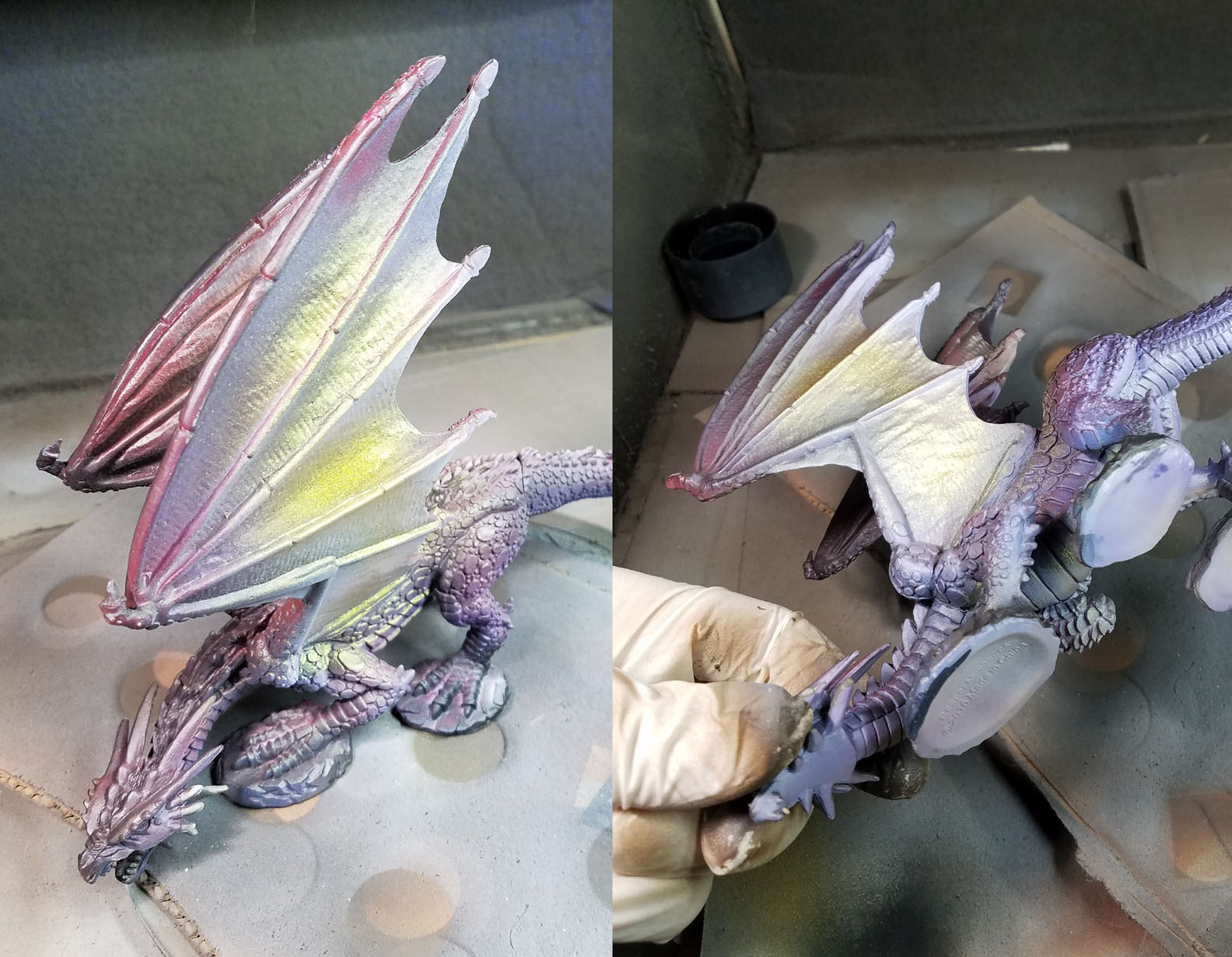 I did enjoy the way it looked on the wings, as well as the underside.  I was able to get even more of the yellow to green shift, and once again it seemed to hold just a bit of my shading. 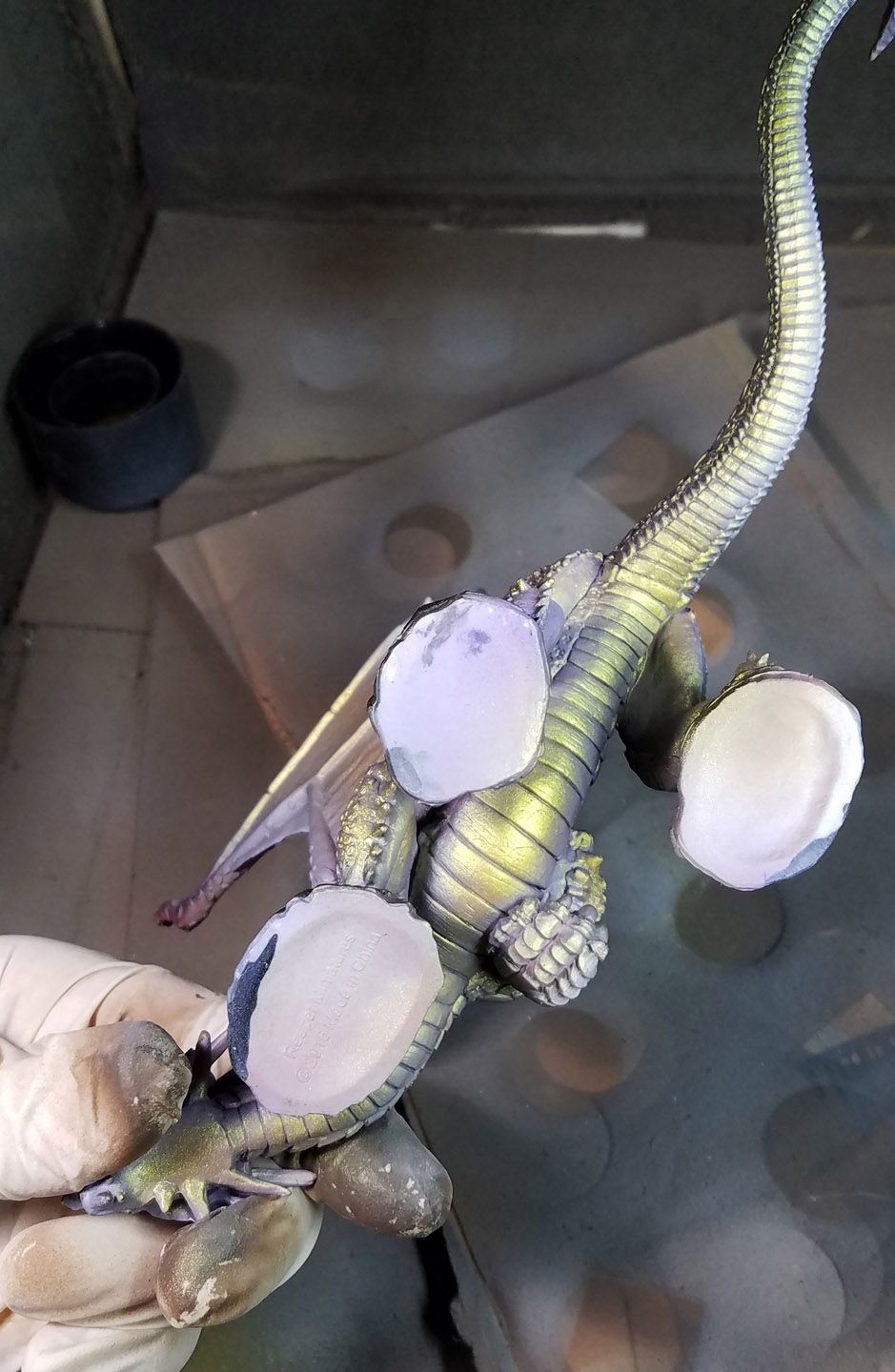 You can see how milky white the paint seems in the cup, so I strongly suggest keeping the boxes around as a reference.  It will take me a while to get used to what each jar is supposed to do.

Spraying the blue over the burgundy gave me two kinds of shifts... one that was designed to happen with the paint, and the other influenced by the red underneath this layer.

I have other dragons which will get the full effect of the color shift paints over the gloss black.

Fortunately one of the new colors of Badger Stynlrez primer is Gloss Black! 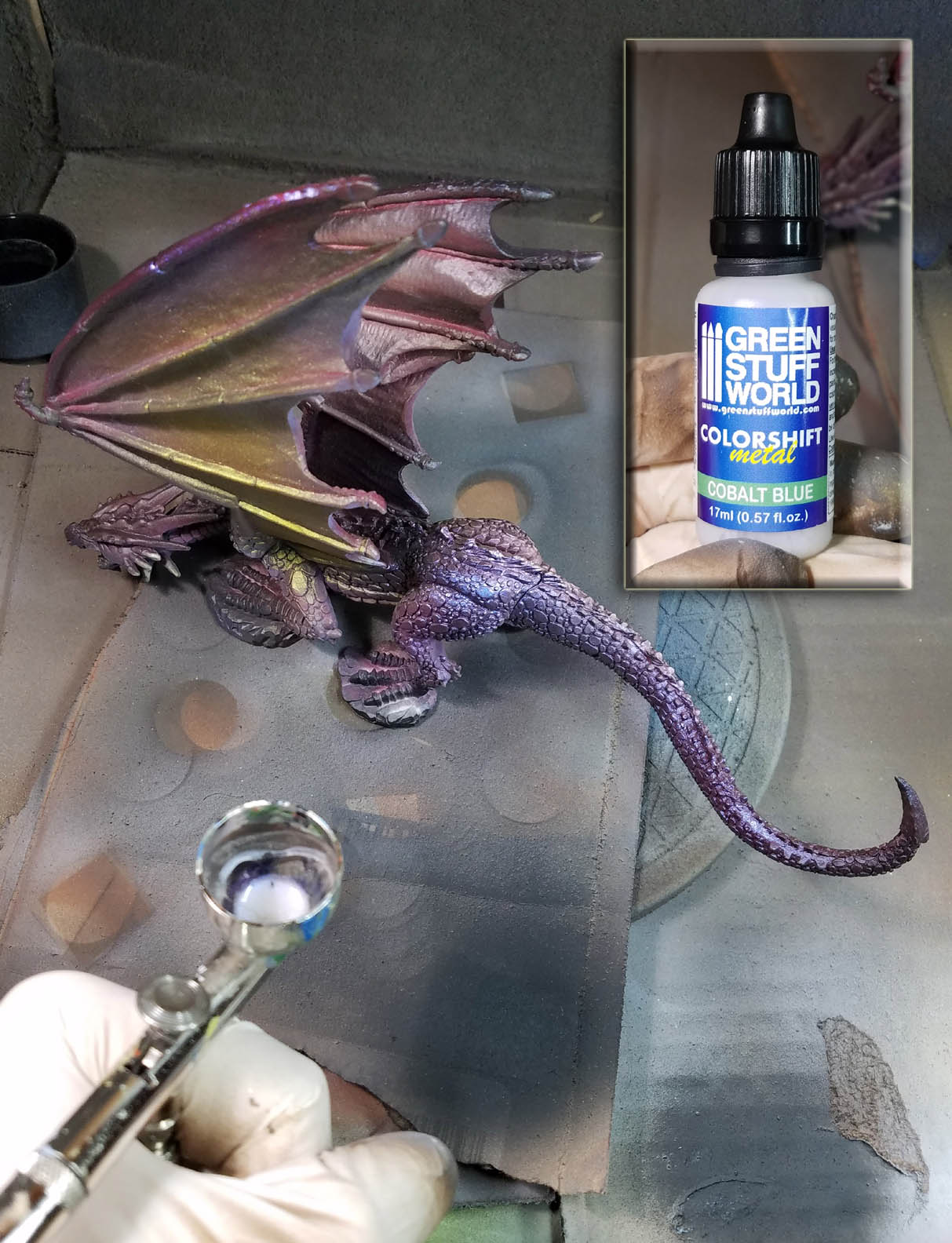 I think the double color shift was even more pronounced on the wings, since my spray angle had to be very shallow, picking up only the upper surfaces.  Much more of the underlying burgundy remained. 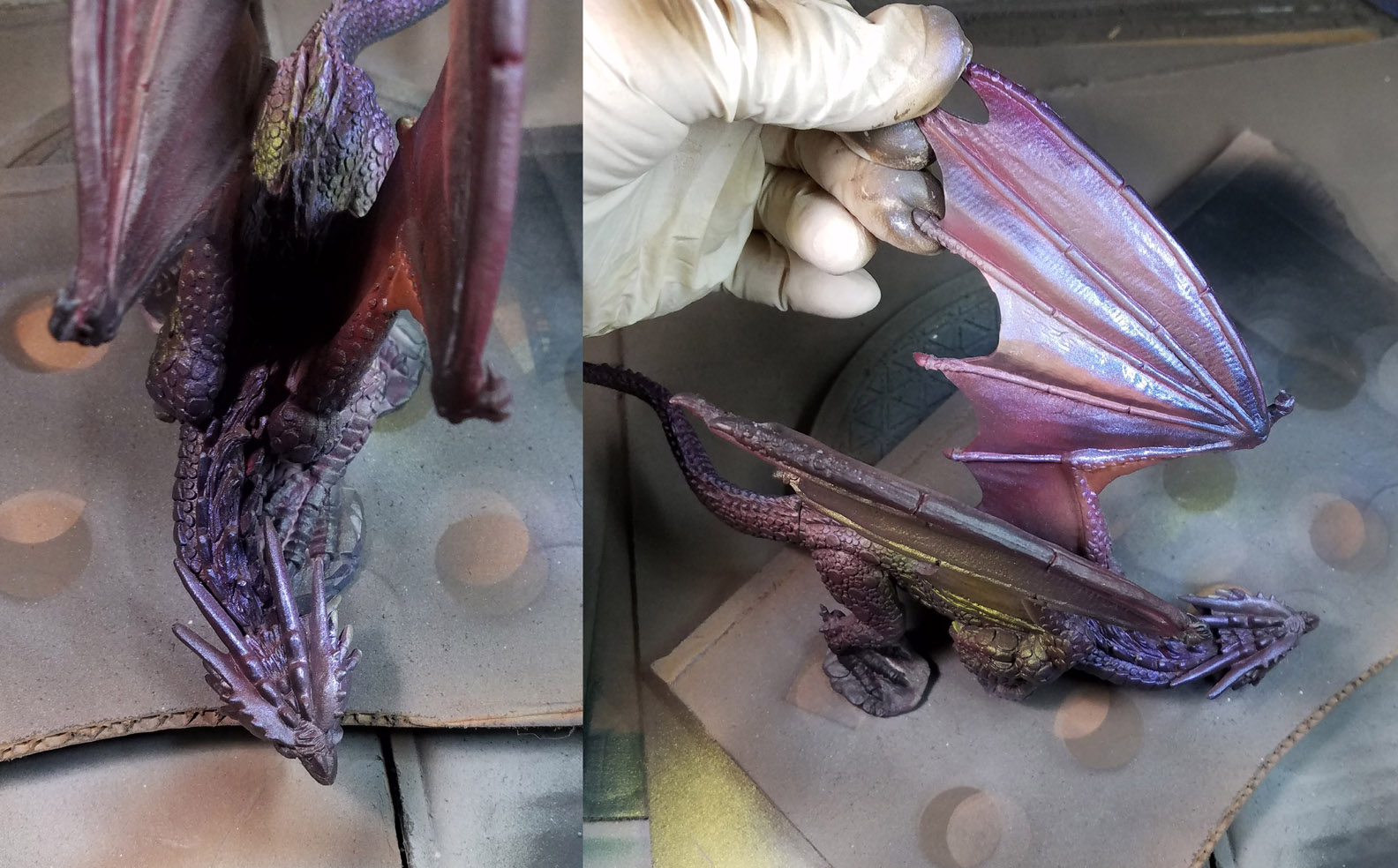 After only a few minutes, the figure had been transformed!  I can only imagine what I will be able to do once I have tested these more, and gotten a better handle on what each shift is meant to do.

I still had a remarkable amount of my original color tone left, but now it would have far more range of color.  It is very hard to see this in still images, so I will try to make some short videos to post here on a turntable.

The greenish shift was meant to form a "bridge" from the earlier cobalt and yellow applications.  This was done mostly on the lower legs and shoulder. 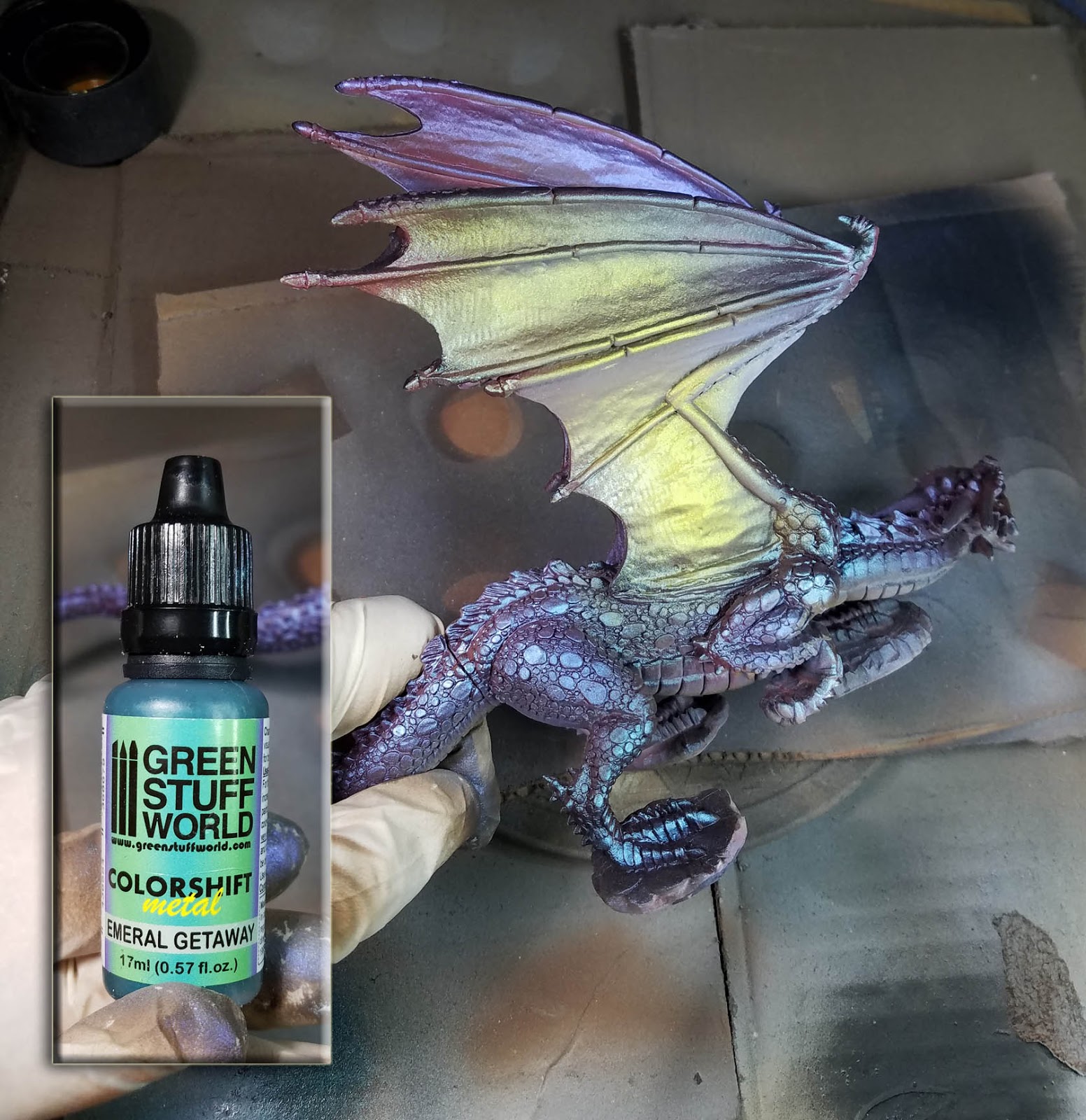 More of the green was sprayed on the feet.  I'm sure this would look much more dramatic once it is based, and the figure is standing on earth, rock, grass, etc.  That would provide a huge contrast to these very shiny metallic shifts. 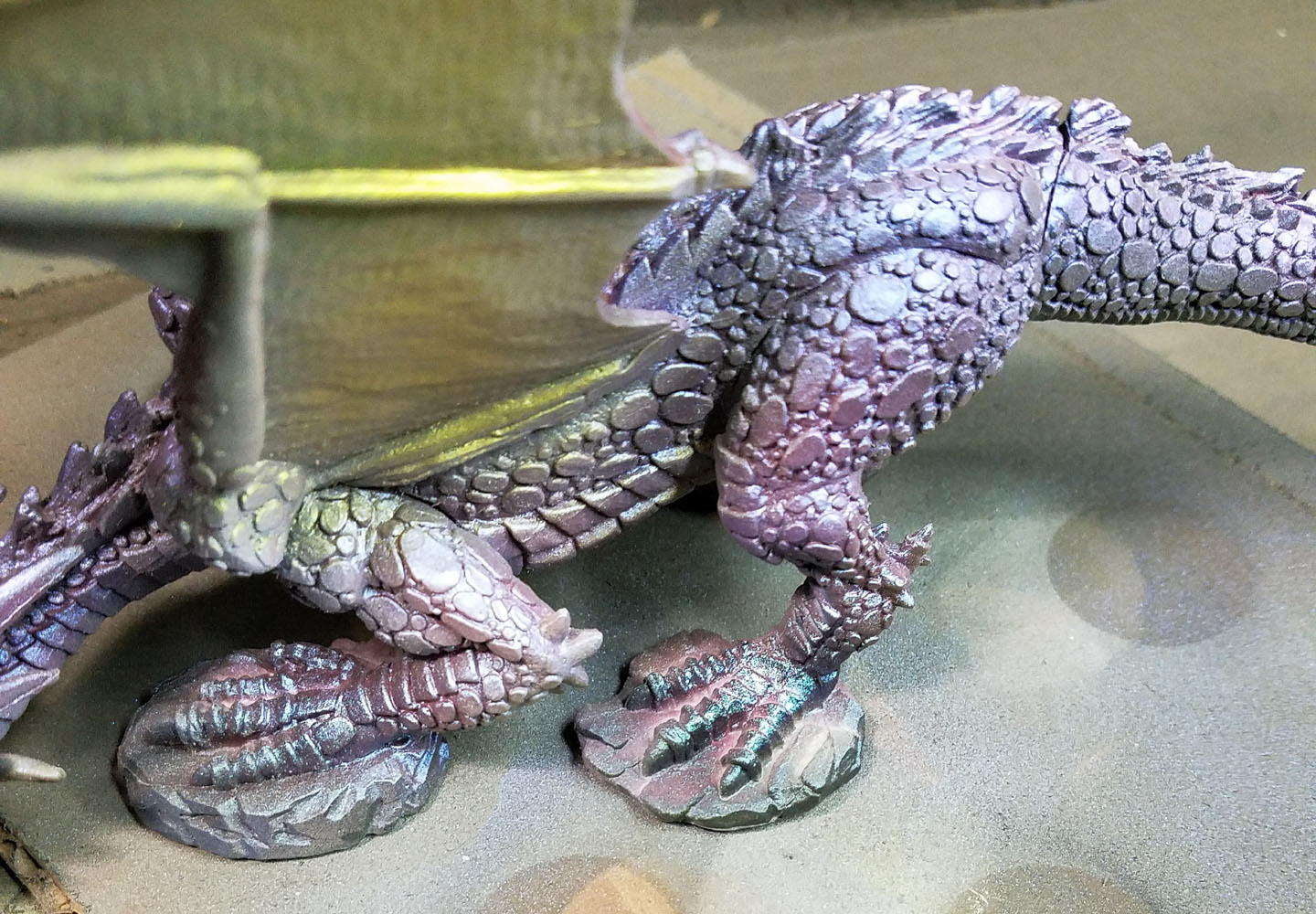 This was after 15-20 minutes of spraying 4-5 of the color shift paints.  I will be trying these out again on a sci-fi vehicle soon.  Not only will this have more of a gloss black primer base, I will try to mask off certain areas so that you can more clearly see the various tones next to each other.

I also want to try some "standard" painting along with that, to see what happens when you paint regular acrylic colors over the top of these colors.  My guess is that the 'flatter' paints will stand out quite a bit, sort of like using wash colors on top of metallic paints.

Eventually I will try to use these on a facebook live session, although I will have to do some magic with my microphones to kill all the sounds of the compressor, airbrush and vent mechanism.

If I can figure out some good techniques to try with these amazing paints, I will try to do some patron only videos for the Patreon page: 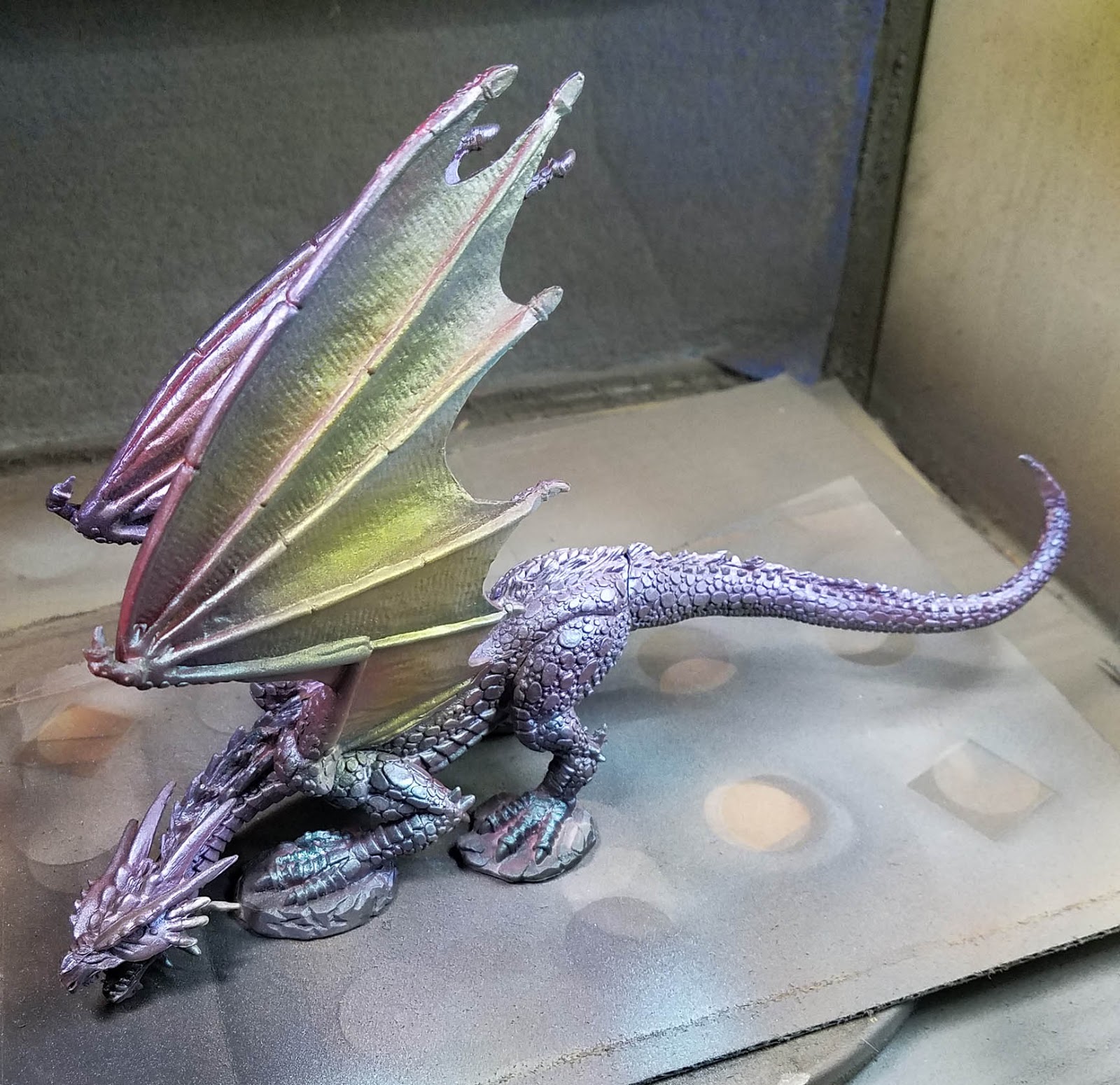 Posted by wappellious at 8:36 AM 2 comments: