The courage of Delilah... a fight To The Death concludes 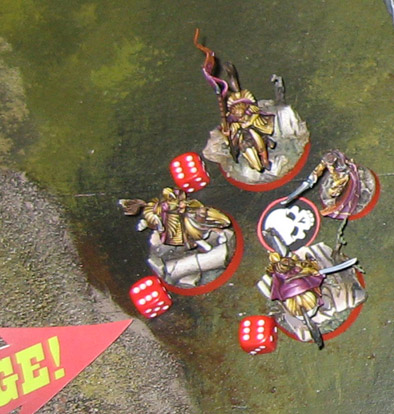 When we last left our intrepid Elven heroes, they were in a desperate fight against a horde of orcs, led by a Ringwraith on a dreaded Fell Beast.  Despite the repeated theft of the initiative by the foul servants of Mordor, the mastery of Elven weapons had swayed the casualty count in their favor, whittling down the orc numbers, especially on the left flank.

The Elves managed to win critical combats... including a Galadhrim knight against the fell beast!

On the right side, Gwaihir had been swarmed over by the raging elite orcs.  The fury of the shaman meant that no courage tests had to be made.  It would be up to my last Stormcaller to keep the Greatest of all Eagles from becoming an endangered species. 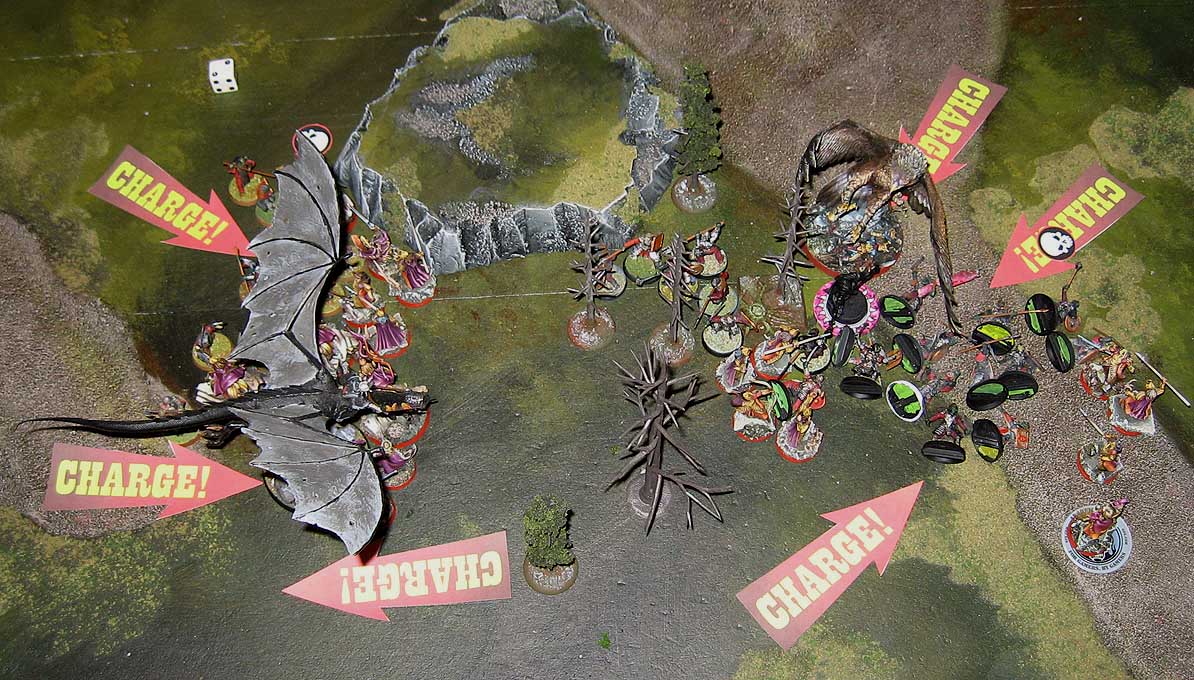 In a critical move, Delilah called a heroic action.  She burst out from in front of the tower, and issued her Nature's wrath spell.  As luck would have it, all of the orcs in contact with Gwaihir (including the banner bearer) were knocked down, missing the shaman.  Their puny minds could not resist the blast the knocked all of them to the ground, freeing up Gwaihir for a charge on the hapless shaman! 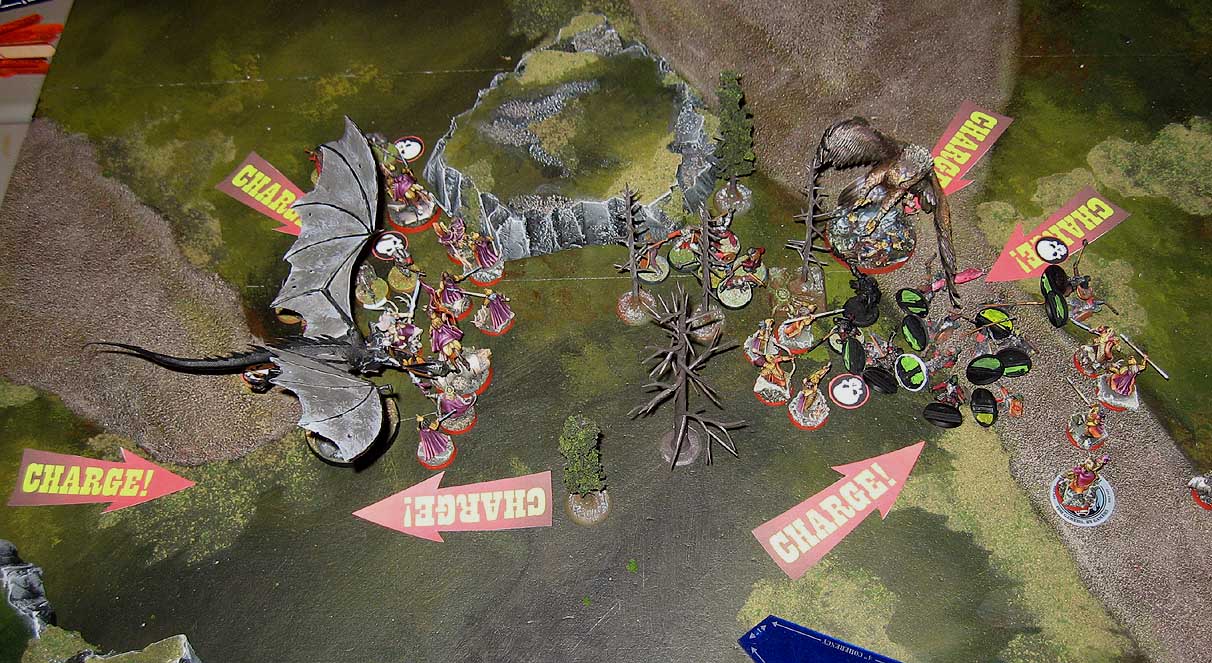 On the left, the Eolves continue to win combats, and kill off orcs.  The numbers become more favorable, but Grishnak continues to elude death.

Unfortunately Gwaihir fails to wound the squishy shaman, and is then transfixed by the evil fell beast.  It would not be the last time, unfortunately.  This is where I got a real demonstration of a Wraith able to run amok.  He was by far Rich's most useful character in all the games we have played.  Rich knew that I knew what he wanted to do, but still made that happen. Kudos to Rich! 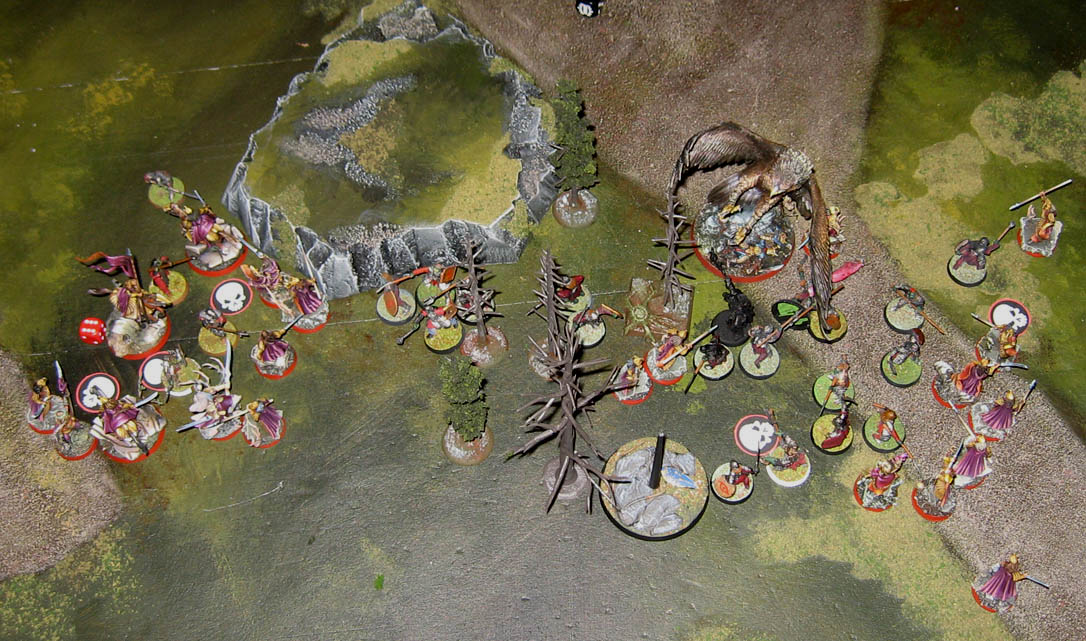 Of course, I was also finding out what adding one horse with a banner could do!  Wow.  Note: the red '6's that you see by the cavalry indicate that they charged, gaining the +1 attack and double knock down dice).

The Elves on the left were laying waste to the orcs, whose numbers were further reduced when the shaman sacrificed one of their number to regain his lost will.  That would be beneficial and costly at the same time... 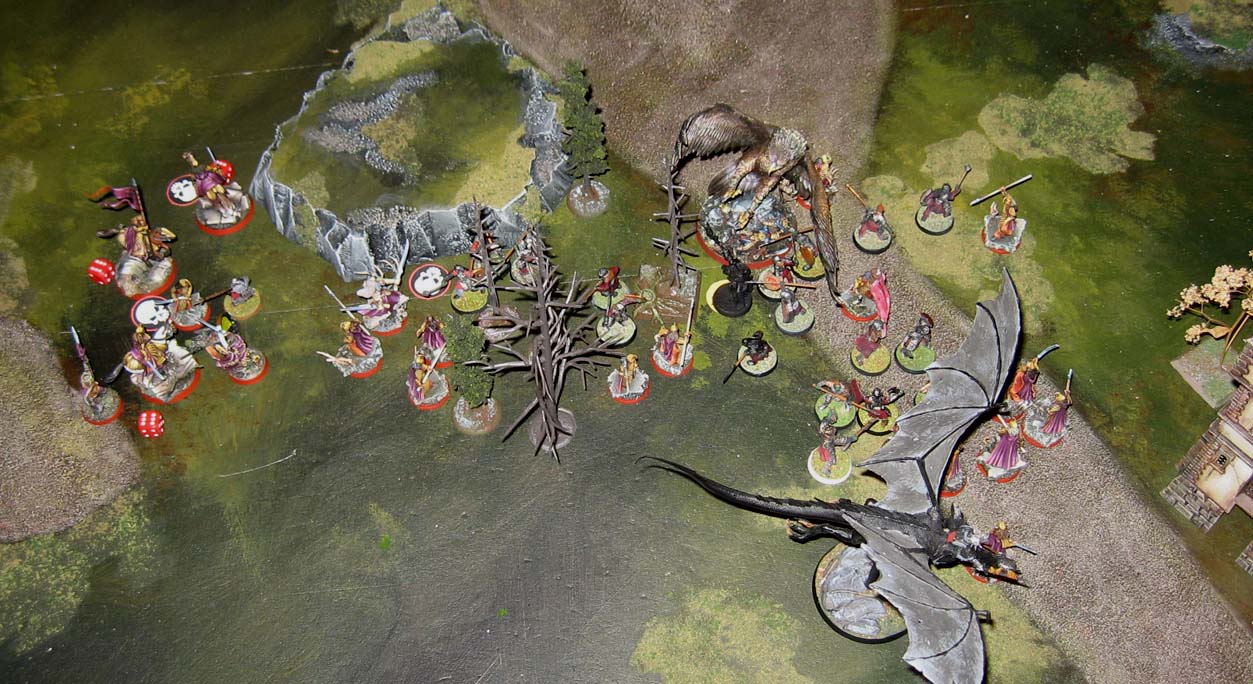 With his renewed will, the Shaman recast fury, which once again meant that Gwaihir would be swamped by smelly orcs.  Unfortunately, this time he would also be transfixed and attacked by the fell beast!  No more Gwaihir...  My archers on the tower failed miserably to kill the banner bearer.  I put 12 shots into him, and only did one wound.  A nearby orc picked up the banner.  Grrr, no +2 victory points for me...

I was worried that the Eagle was gone, as I saw him as my main response tool for the fell beast.  However, the Wraith had been doing a lot of casting and been in several combats.  His stock of will was running dangerously low. 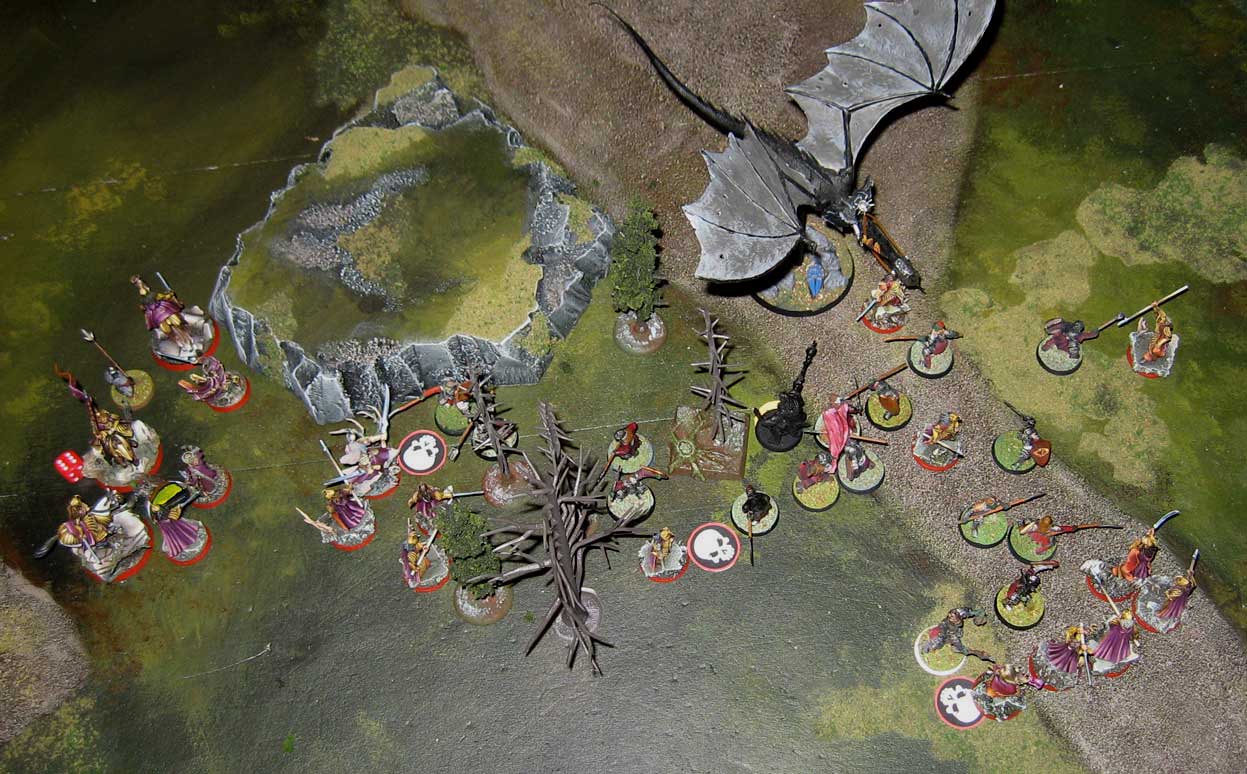 It seemed to take forever to kill off Grishnak.  Actually, it did.  I rolled 25 strength 4 wound rolls, and he never suffered a wound!  One tough cookie!  I was getting nervous, since I needed to bring all that valuable cavalry (along with Seregond) over to the right side, where Knights of the Blood Rose were falling rapidly.

At last, Grishnak is felled, and everyone dashes to the right.  Delilah failed to cast her last Nature's Fury, so she abandoned her staff for a sword, and fought the elite orc captain to a draw. 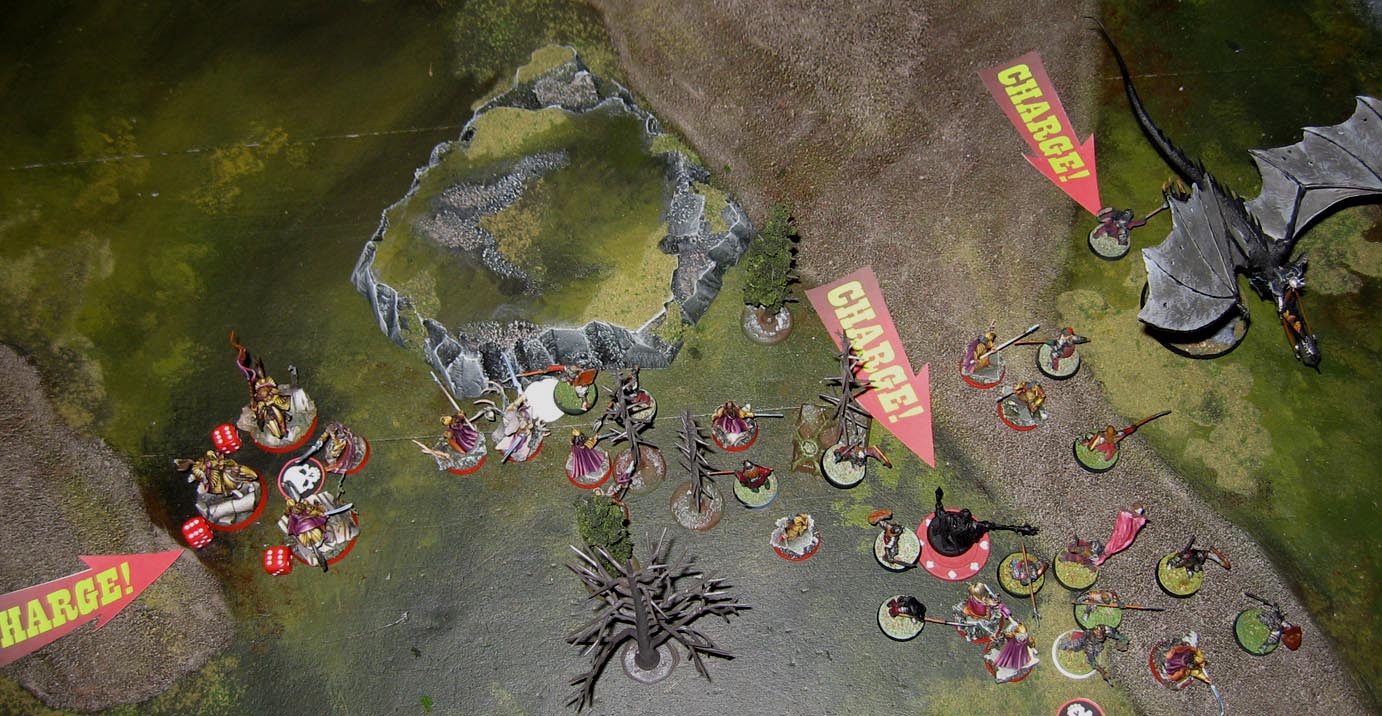 More girl power on display as Delilah takes on the fell beast and WINS!  Now the cavalry, as the saying goes, was coming to the rescue.  The charge bonus, and the banner in particular, were key.  The orcs reached their break point at last.  The Shaman still had fury, but all the orcs outside his range wet their raggedy pants and headed back to Mordor.

Even the Ringwraith failed his roll, needing to spend might, and more will for the price of those combats.  Since it was another +3 points to me if he died, the servant of Sauron flew away from the Dreaded blades of Delilah.  Who says Eowyn is the only girl out there who can take on a Fell Beast? 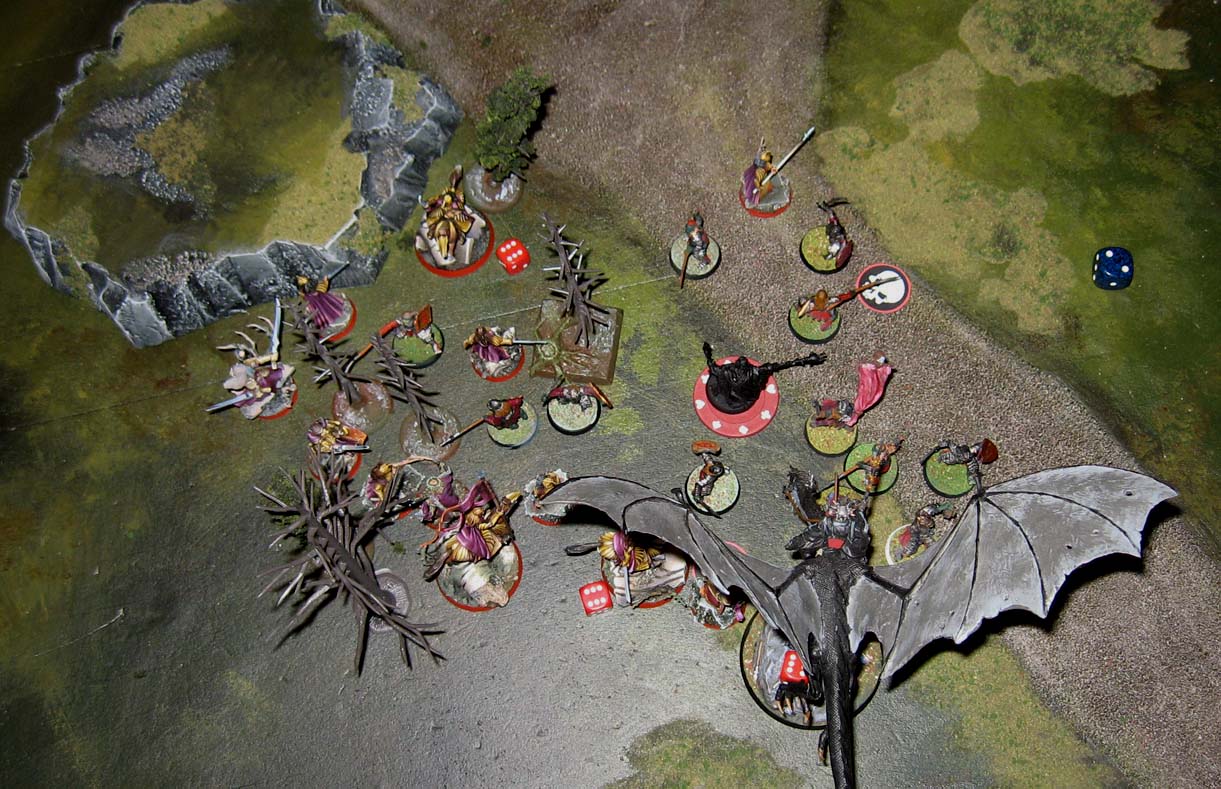 Eventually the orcs drop down to 25%, and the game ends.  Rich gains a +1 for wounding Seregond.  It's a wash on banners, but I get a whopping +5 for not being broken, yeilding a nice victory for the Knights of the Blood Rose.  The MVP's of the match were Delilah and Grishnak, respectively. 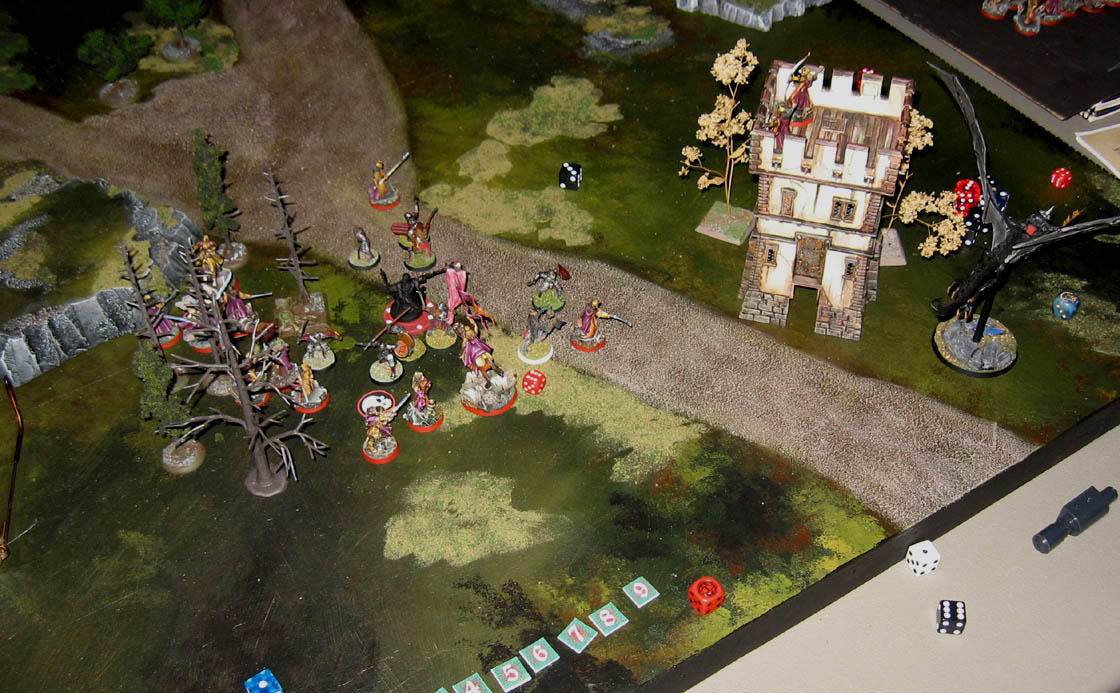 Once more, Nature's wrath was not cast many times, but the few times it worked out, it was a game saver.  It was very scary to lose priority every turn except for turn 1 of a 10 turn game!  It could have been very ugly.  Fortunately, the Elves high weapon skill saved the day.  I guess it was not so bad that all those will and might points were spent killing the eagle.  Had the banner been transfixed and killed, it could have cost the Elves the game.

I always tell myself to discount archery, no matter how good it is on paper.  I did expect more from the elf bowmen this time.  More target practice is in order, I think!

Posted by wappellious at 8:04 PM 2 comments: 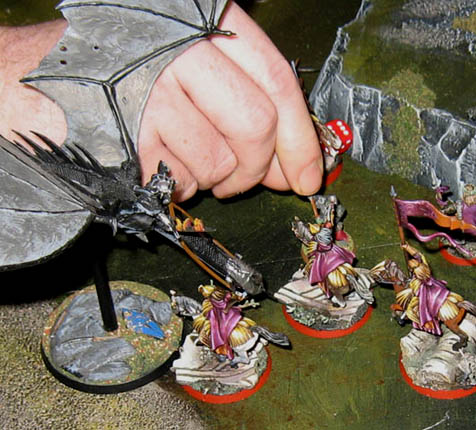 Back to the gaming table for another 600 point test game for the tournament which is just days away now.  Yikes!

For this game, we did a scenario we had not tried yet... To The Death.  This game is all about breaking and banners.  It can be very rough on outnumbered armies, that's for sure.

Hanging onto a banner bearer can also affect what you are trying to do, as you have to balance keeping that guy alive vs having the banner in a good spot to get the most re-rolls out of it.  This is the 2nd game with a banner, and with Gwaihir as well.

You can see the army here.  The usual stormcaller units, and the expanded cavalry unit.  In other circumstances, I would almost rather have 4-5 more cavalry than the eagle, but the story of the army calls for this arrangement.  Seregond, the Elven captain, is the general as well. 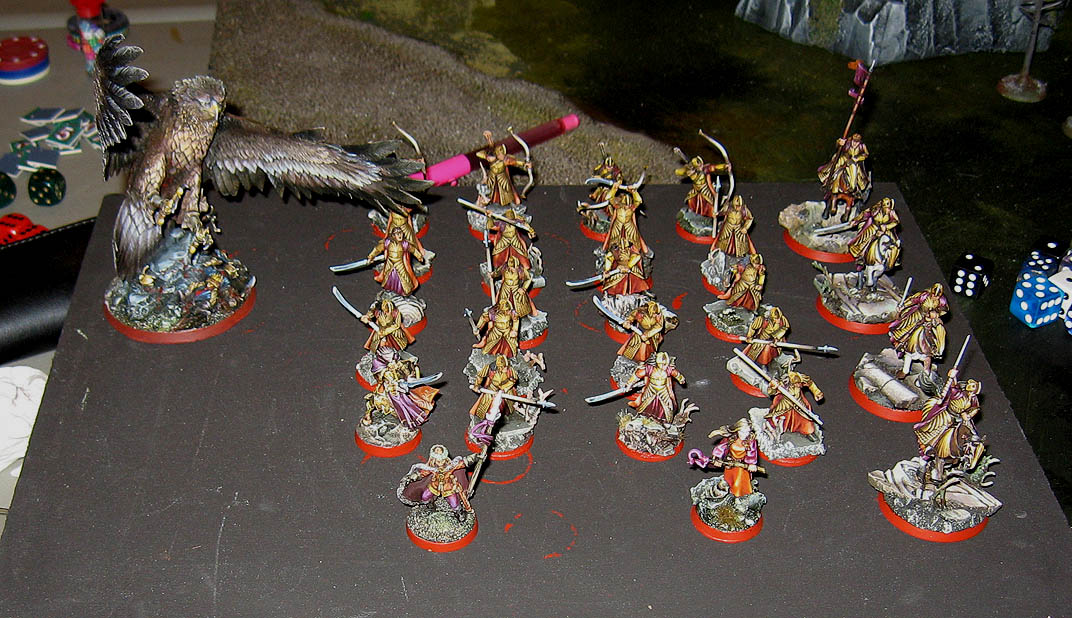 Here are the Evil forces, led by an unnamed Ringwraith on Fell beast.  There is a shaman, and Grishnak leading a unit of standard issue orcs.  The other orc unit is elite, with the higher fight skill, etc.  Once again, Rich kindly volunteered to create a whole new list that he had never played before to go up against an army that we had been fine tuning for months...

As usual, all it takes is rolling less than a 4 on those first units to make you deploy all your stuff as close to the front as possible.  Such a bad idea, as a number of concepts are in the official scenarios.  That is why we have been playing these games on a 4 x 4, as the extra 2 feet would almost never see use.  As you watch this game transpire, you will notice that we could have played on a 3 x 3 board!

You will also see what happens when you only get priority once in a 10 turn game!

The elves are hiding in the woods and the building, while the orcs deploy right up to the edge of their zone. 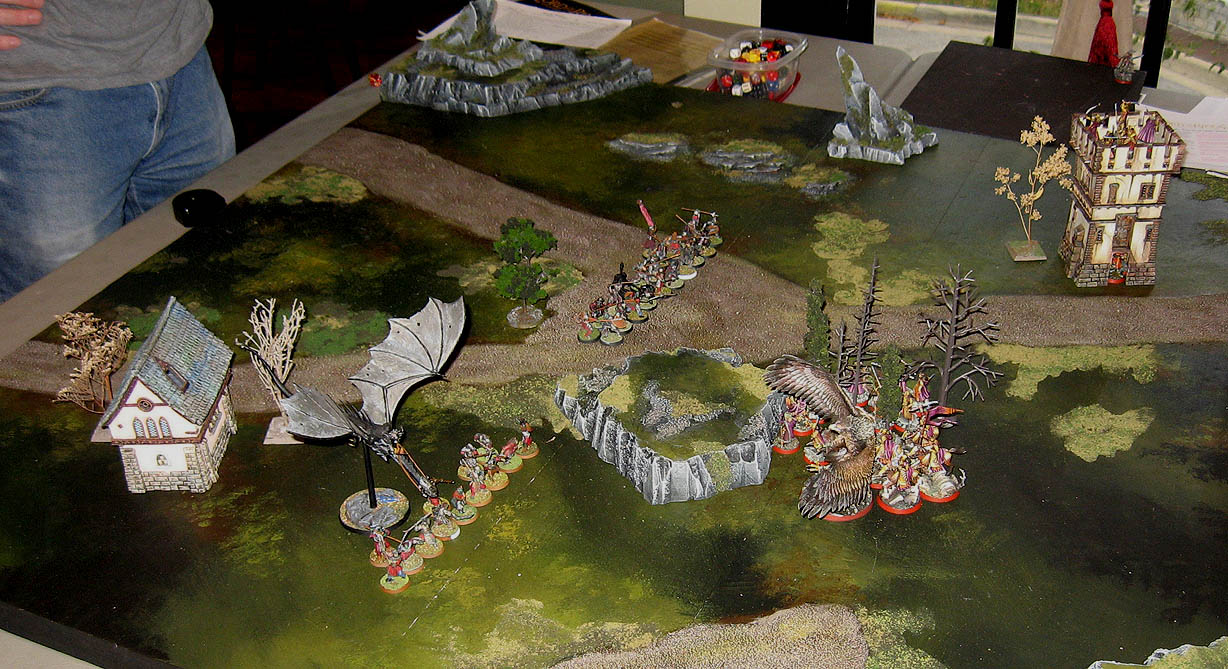 I knew that the wraith wanted to to sap will on the stormcallers, so I attempted to hide him.  I figured it would be impossible, given the flying mount! 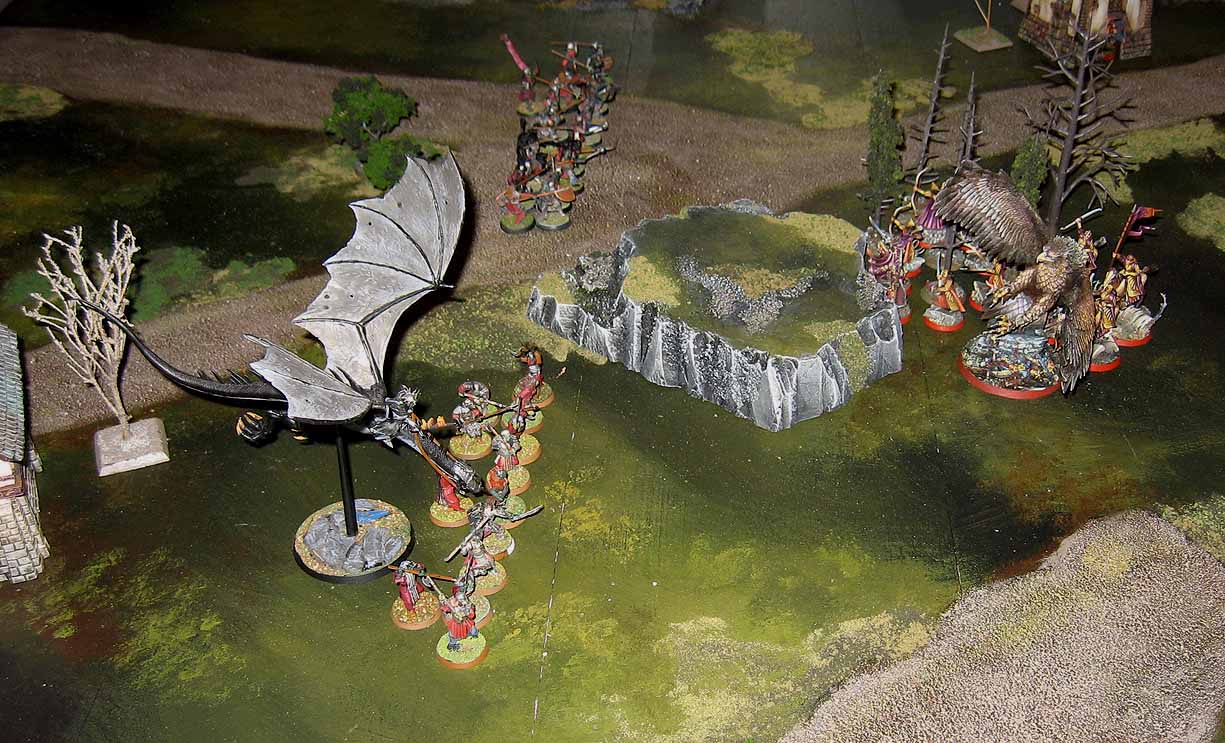 I moved the cavalry and bird backwards, so that they could be used to react against either orc unit on the two sides of that central hill.  My preference was to go after the weaker orcs on the wraith's side of the board, to stoke up casualties and outnumber the stronger orcs, hitting them with cavalry later in the game. 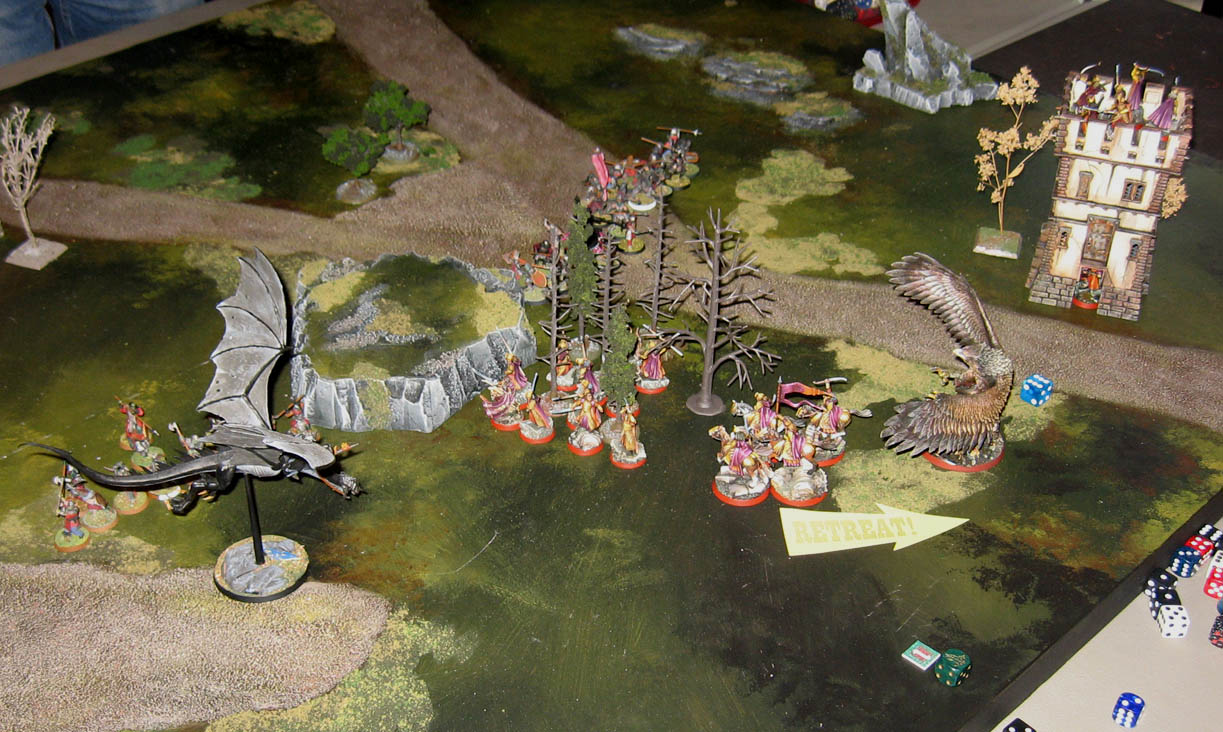 The hand of Sauron himself intervenes!  This was yet another one of my desperation "non-priority" heroic moves to save myself from being wiped out early...

I charged the Wraith with a Knight, just to keep him from casting and to make him use will.  Since I had a banner nearby (and the same fight skill), I hoped I might get lucky!  On the other side, the elves leave the building (except for the archers), and Gwaihir charges the orcs on the right... The stormcaller on the left manages to roll a 6 on Nature's wrath, knocking down a few orcs, and getting his one point of will back!!  The combats on the left go reasonably well for me, keeping me from being outnumbered on that side... 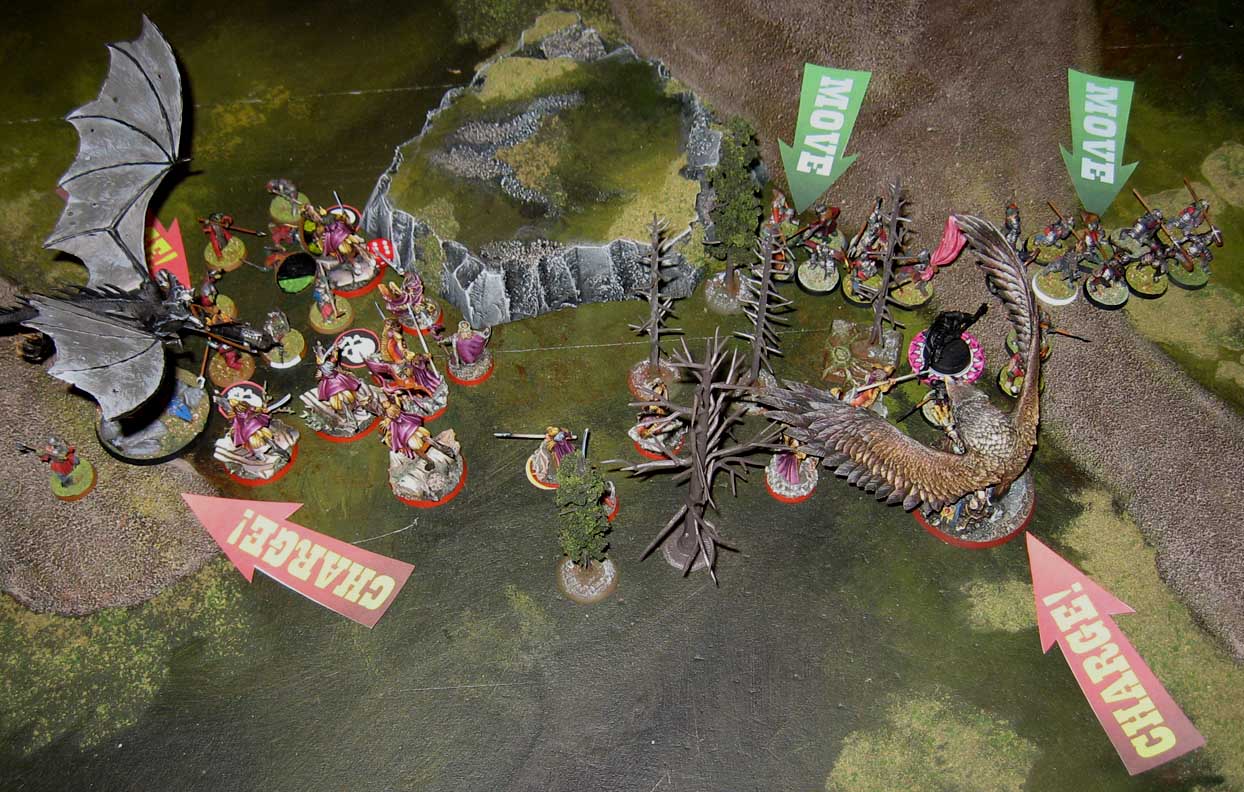 I knew on the next turn that if I lost priority, the elite orcs on the right would charge Gwaihir en masse.  The shaman had fury going, so they would not need to test.  I figured that the big bird would be way too good of a target for hungry orcs to pass up!  Waiting for them was Delilah, the other stormcaller who had exited the building the previous turn... 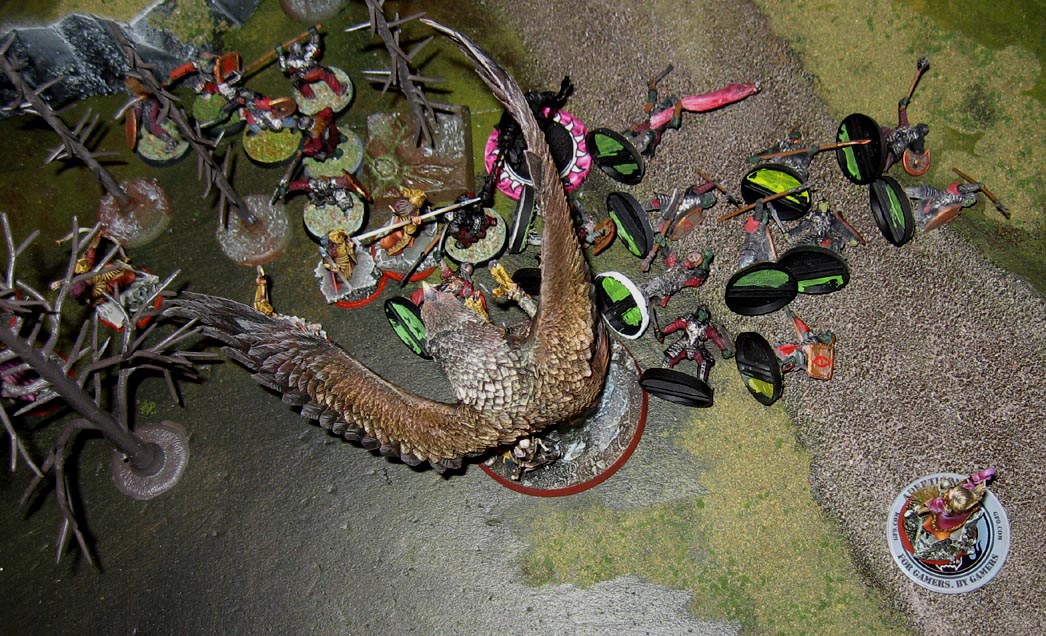 So, would the Fell Beast trample over the Knights of the Blood Rose and kill the noble Seregond?  Would Delilah be able to save Gwaihir from the ravaging orc horde?  Would I ever be able to get prioity or shoot a bow properly?

When you need an extra elf... 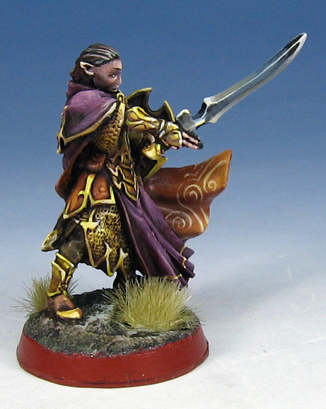 After Rich and I tweaked the list a few times for Bilbo's Bash, I realized that I was short 1 elf with a sword and shield.  I just didn't have the time to somehow convert one of the many extra archers, and I was not going to buy a whole box just for one more either!

So, I took one of the Reaper High Elves that I had been saving for special characters and painted it in the standard Knights of the Blood Rose colors.

The Reaper High elves are fantastic replacements for the GW character minis, since they are a bit larger scale, and don't look exactly like the regular troops.  That is very helpful in those inevitable end of game scrums!

Here is the original color test mini as a work in progress.