You're in the Jailhouse now... 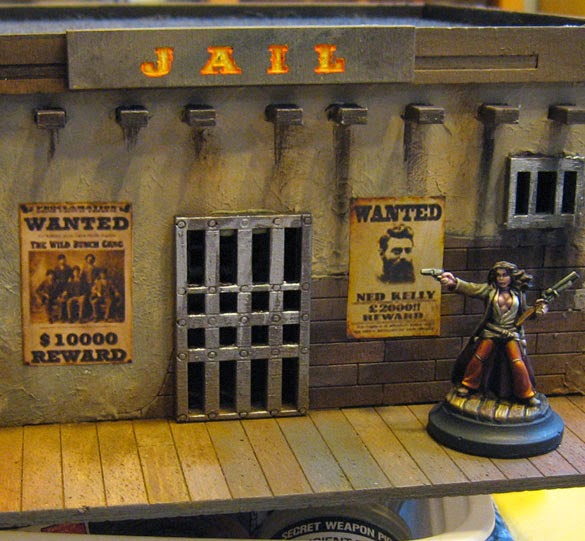 We continue with our Jailhouse project, the fantastic new building from Burn In Designs.

No Jail is complete without Wanted posters, so it was time to hit Google. I selected a variety of posters, including those which left a spot for your own image.

I figured that I would make my own Wanted posters later, and use this selection for now.  One of them was even Billie the Kid, so that was perfect!

Posters printed... time to cut them out! 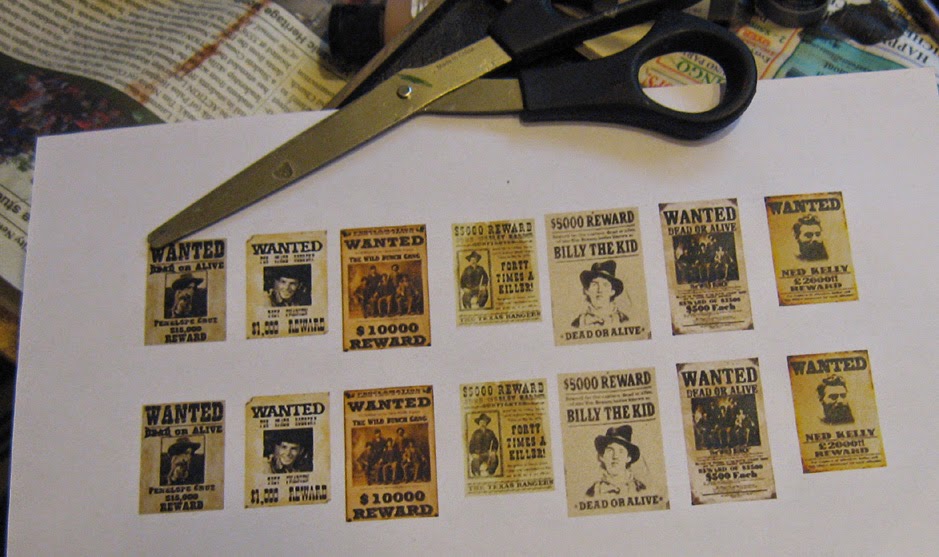 The posters already add so much flavor! 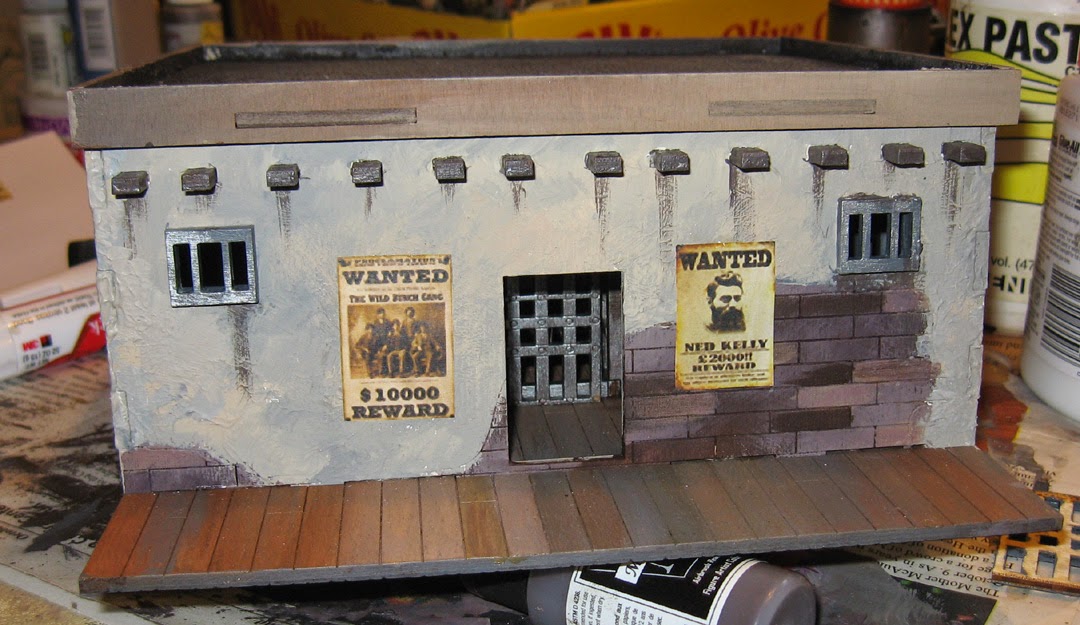 More posters on the side walls... 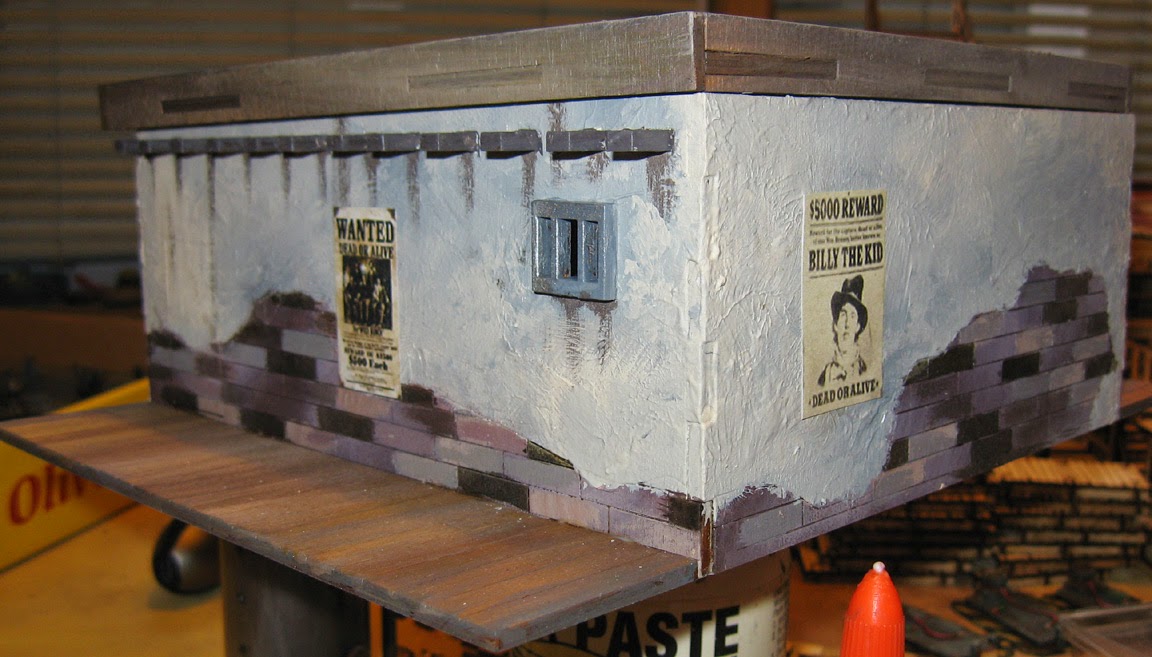 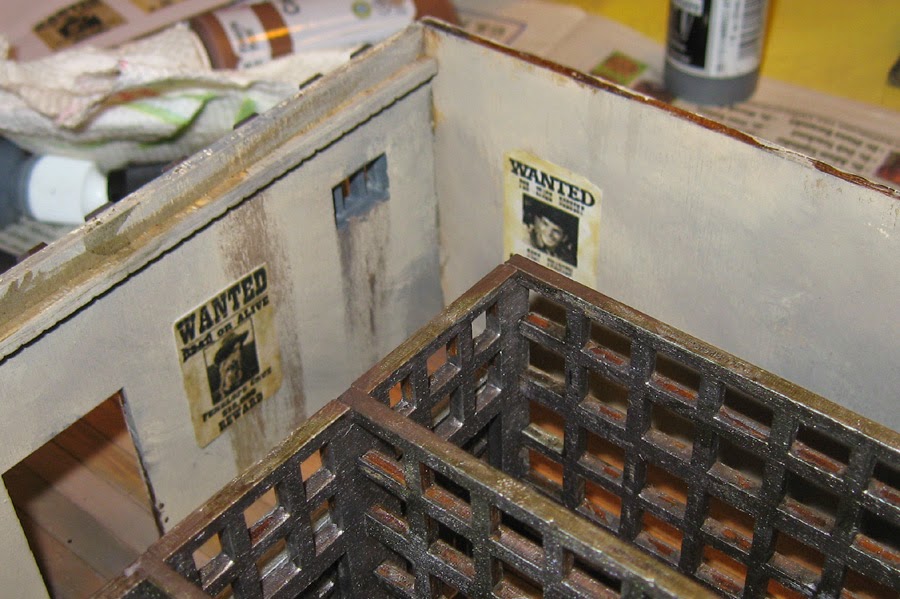 I brought out some Secret Weapon weathering powders to do some final work... 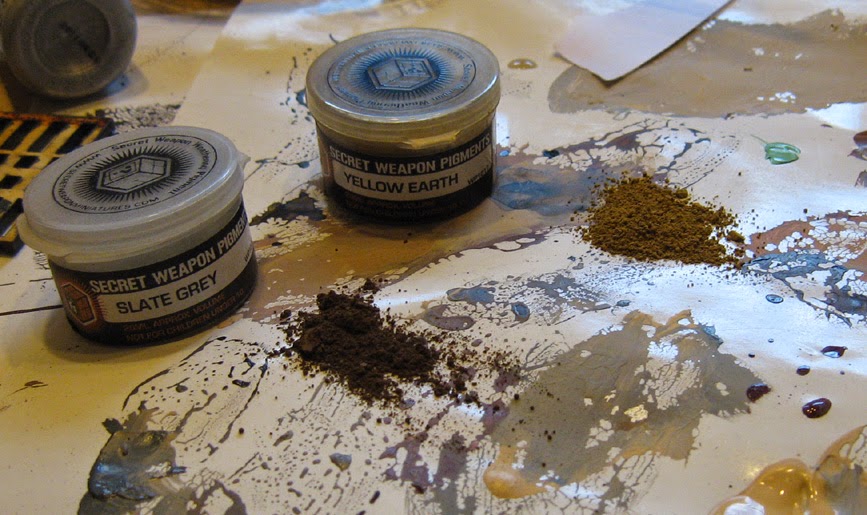 Using a large, soft brush, the dried pigments were applied towards the bottom of the walls to indicate the kicked up dust. 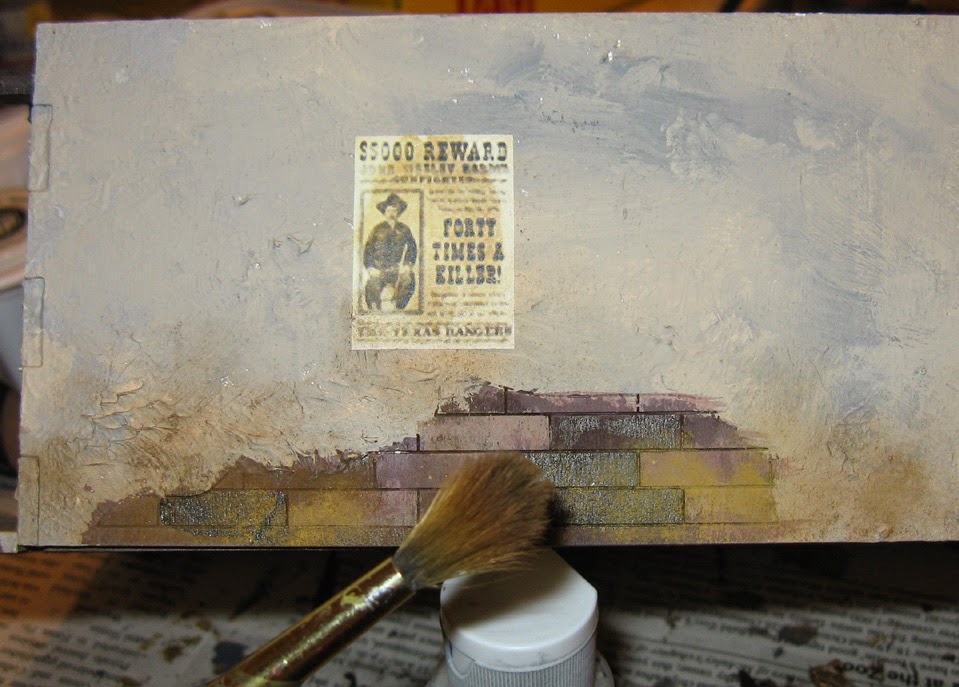 A darker mixture was used to indicate some stains coming down from the roof.

I love the difference little touches such as these make. 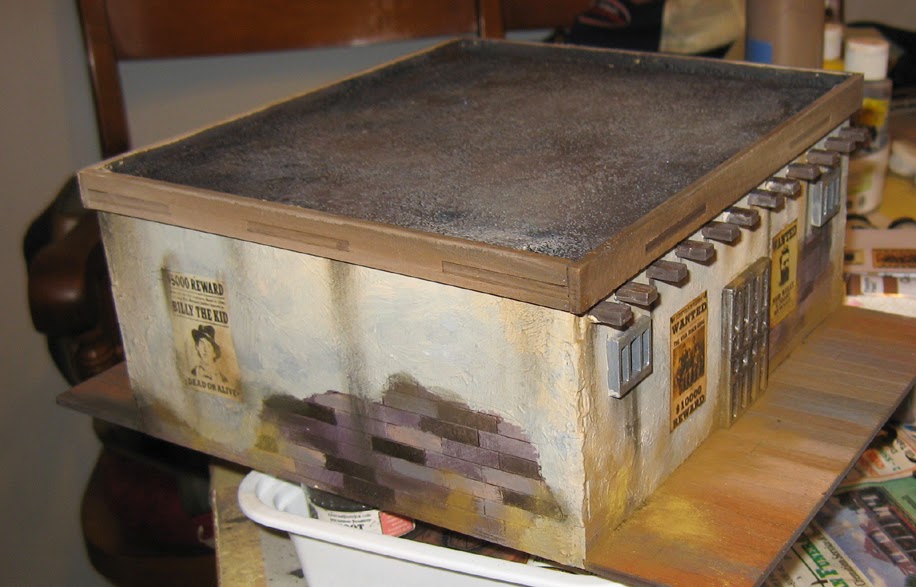 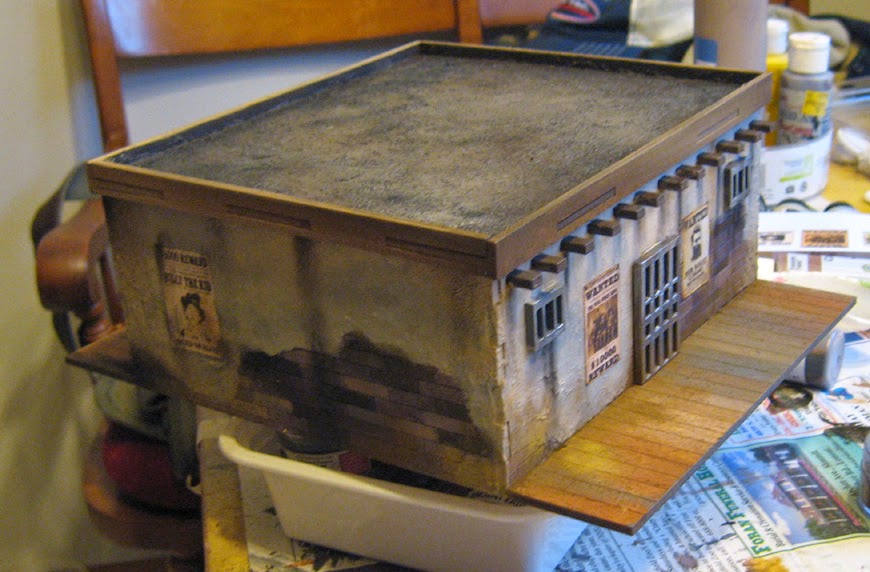 Here's your sign!  Done in glowing red, as my Lawmen love. 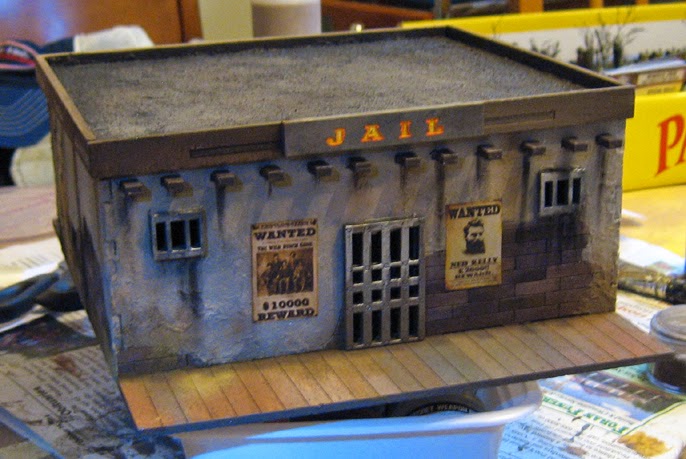 The 'mysterious stranger' arrives at the Jail.  Could Worf be inside? 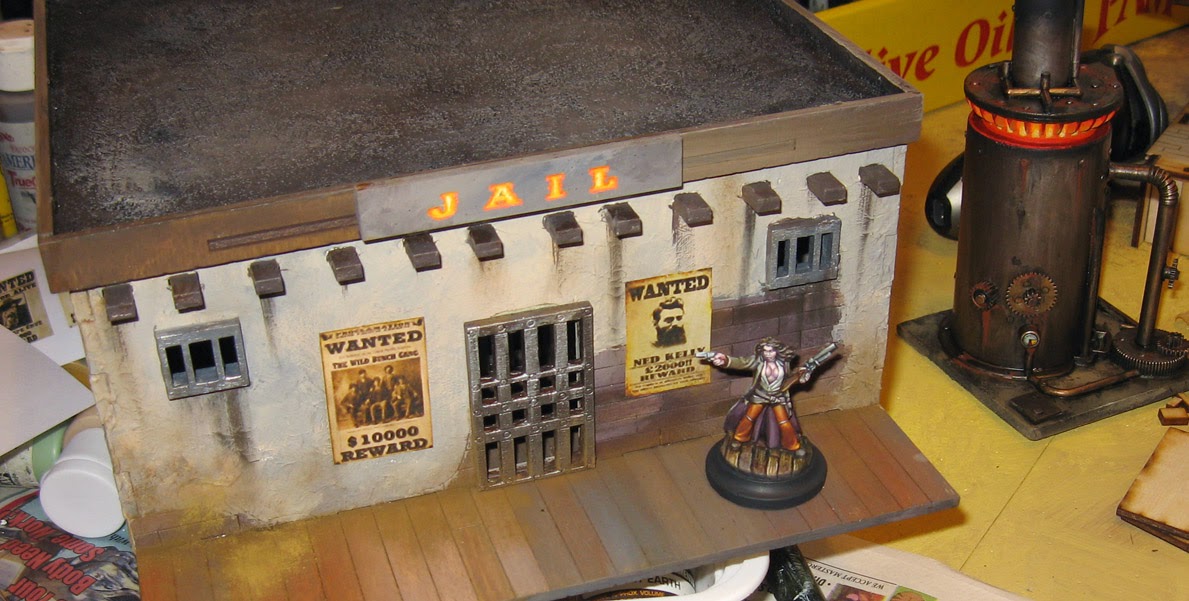 My next effort will be taking care of the boardwalk sections and possibly the Gallows. 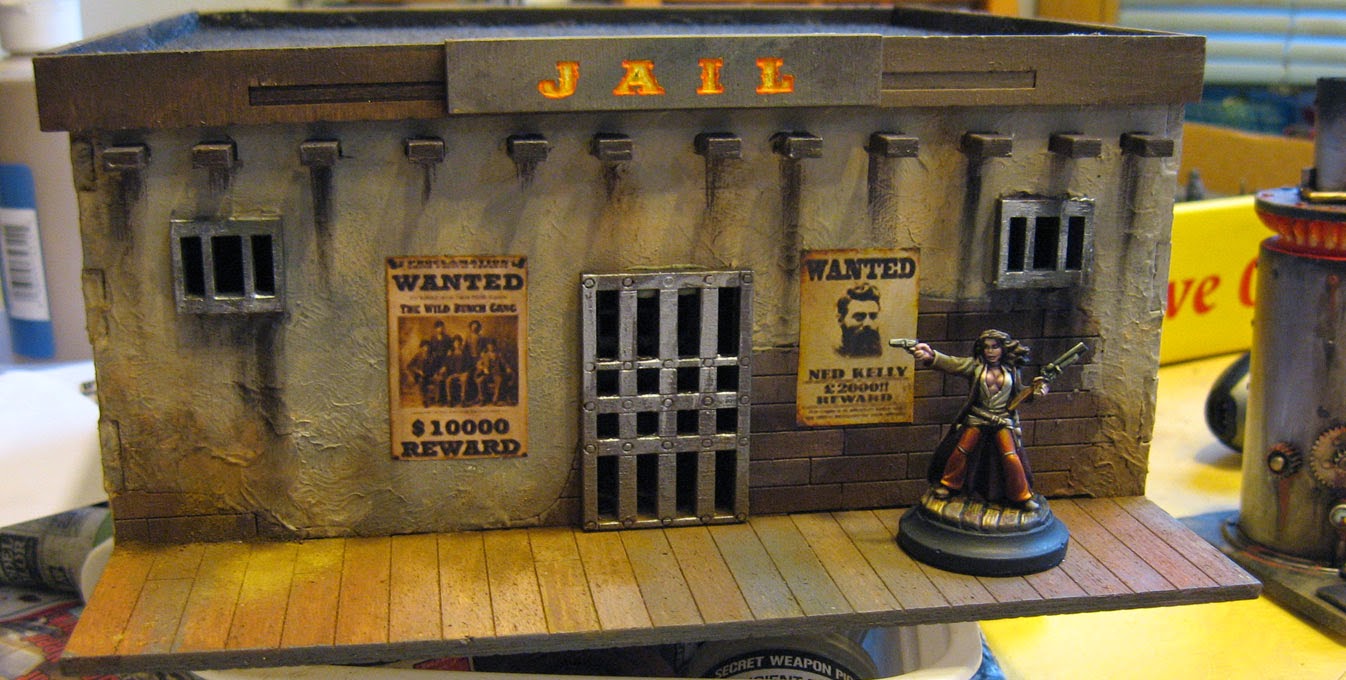 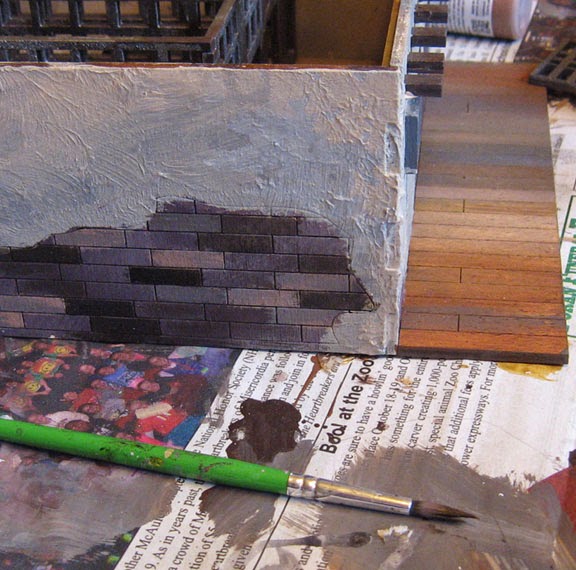 Now for another phase of the Jailhouse from Burn in Designs!

After the Flex Paste had dried, it was time to paint the walls! 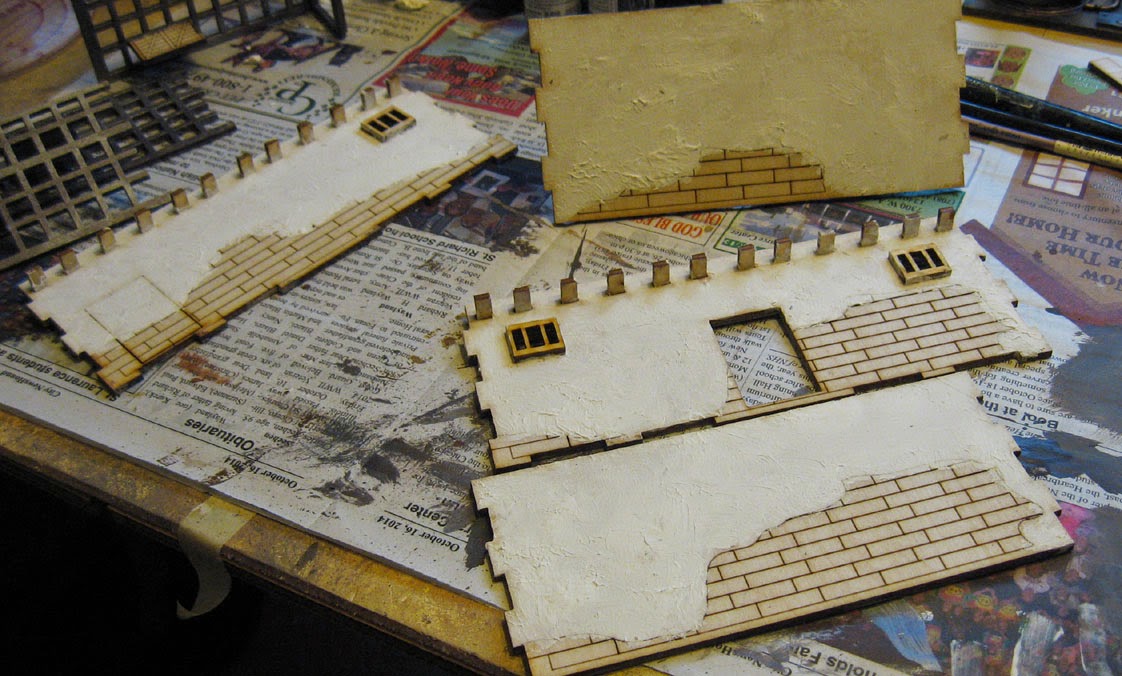 I put out some basic colors on the palette... a few reddish browns, a grey, and an off white. 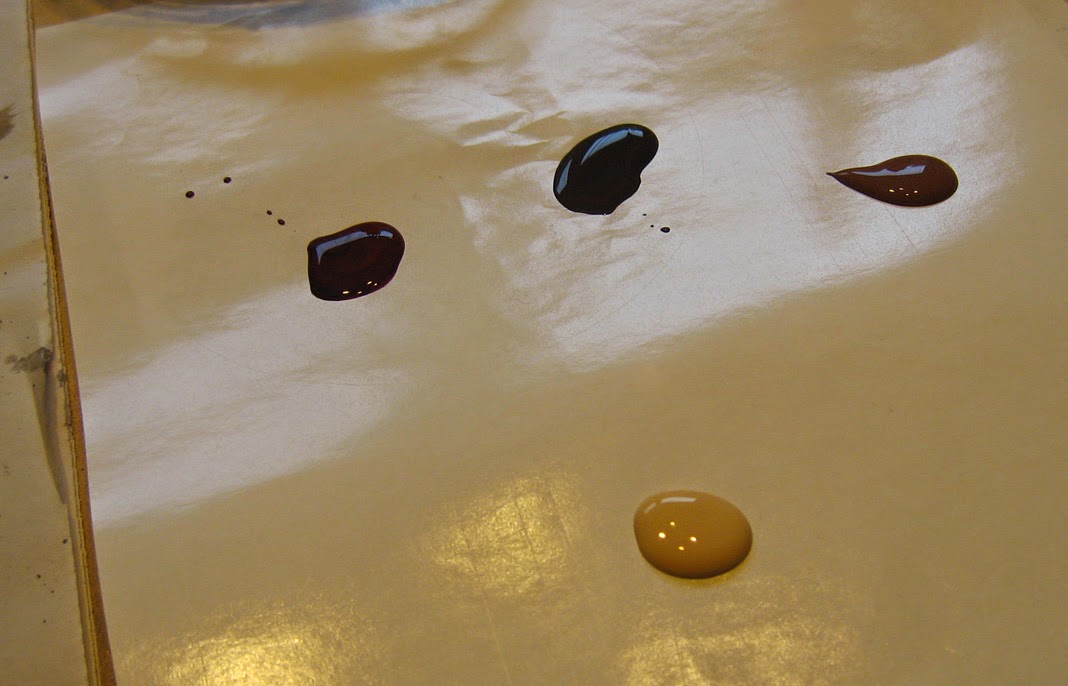 The reddish brown and grey were mixed together to create a darker, cooler red shade. 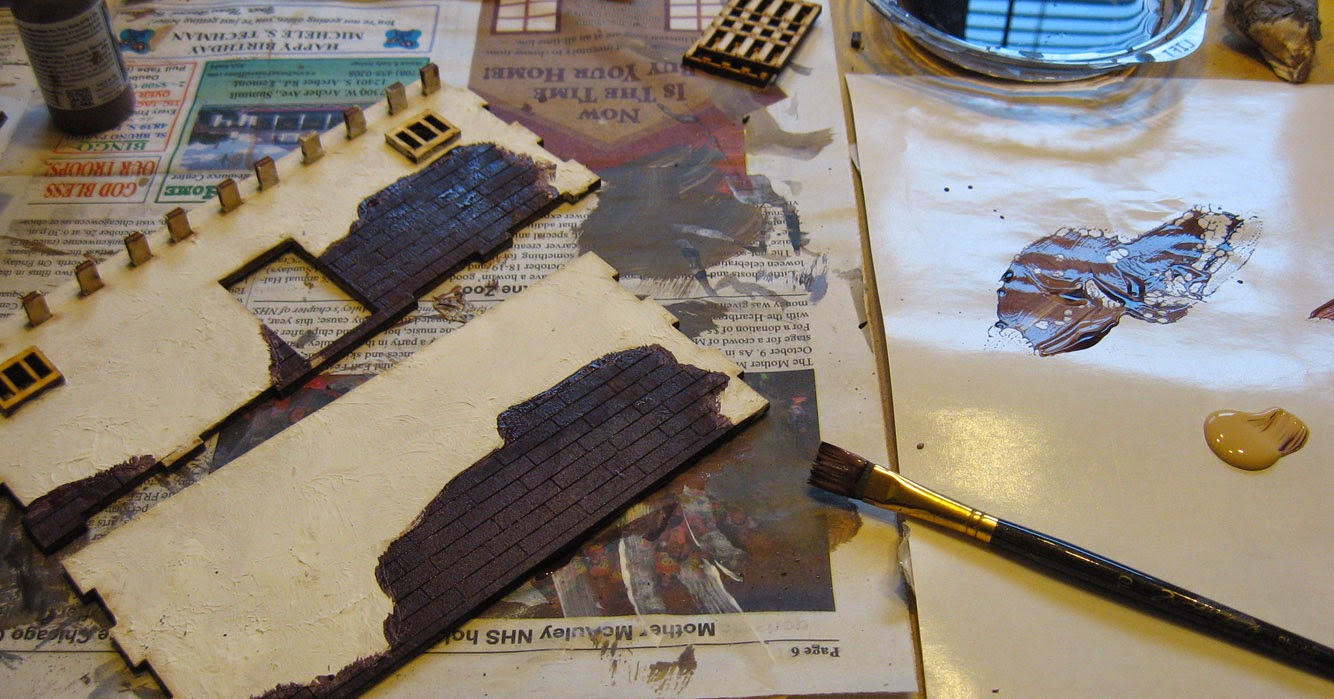 Some of the lighter browns, and even the off white were eventually mixed in as I brushed over the lighter colors with a larger flat brush. 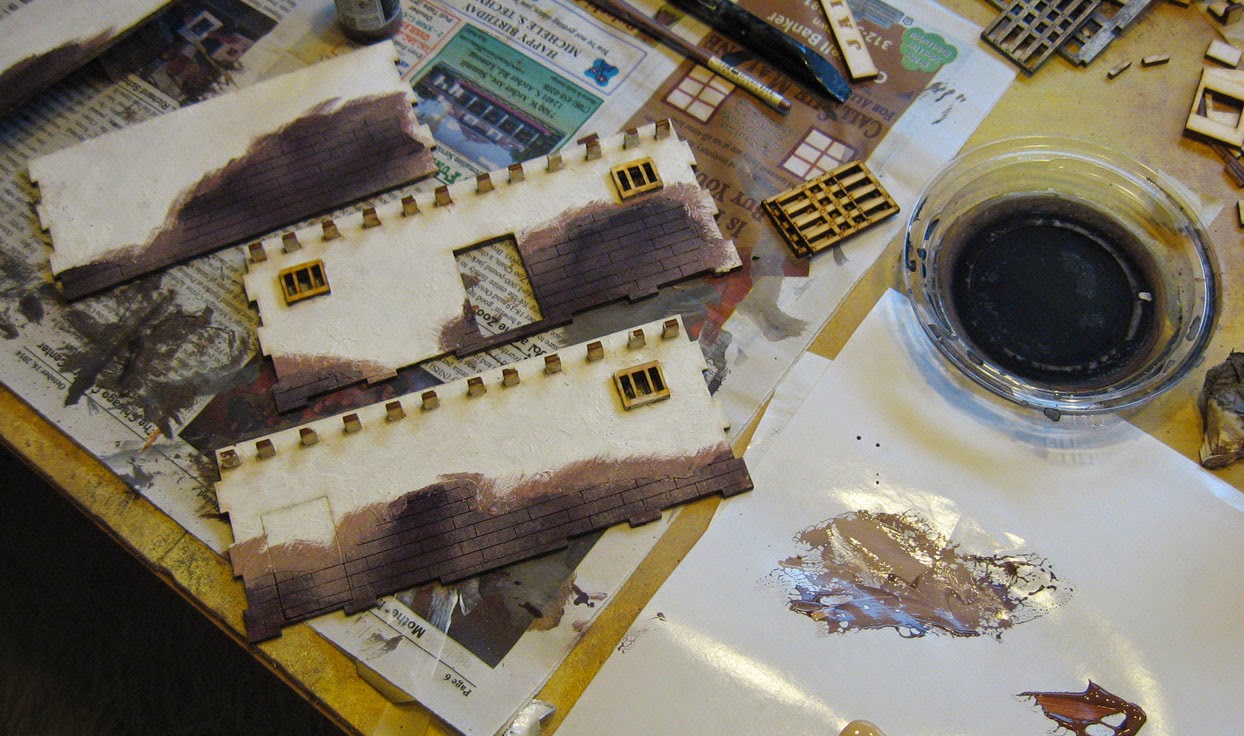 By working rapidly with these broad strokes, the paint stayed wet enough for enough time to allow me to mix right on the panels.  The same was done for painting the stucco portions of the walls, scumbling the paint as before. 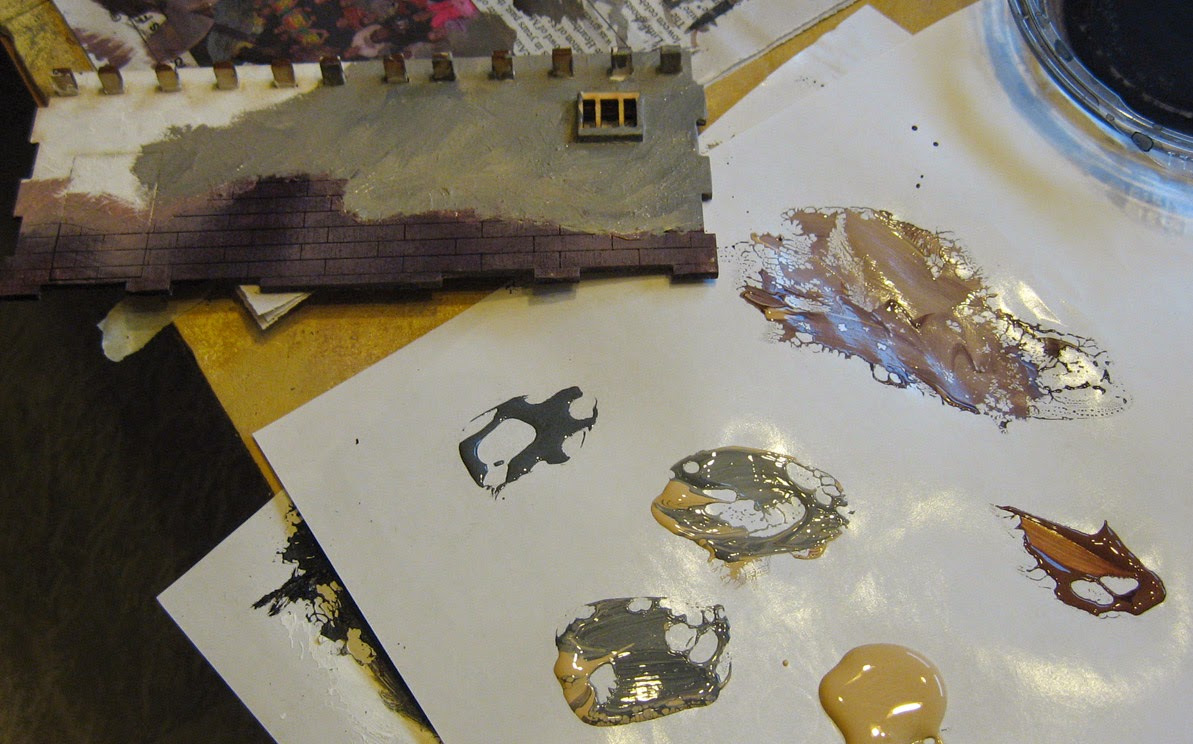 All four exterior walls painted!  Again, keeping the colors somewhat grayed down important, as well as maintaining a lot of subtle variety in the shading. 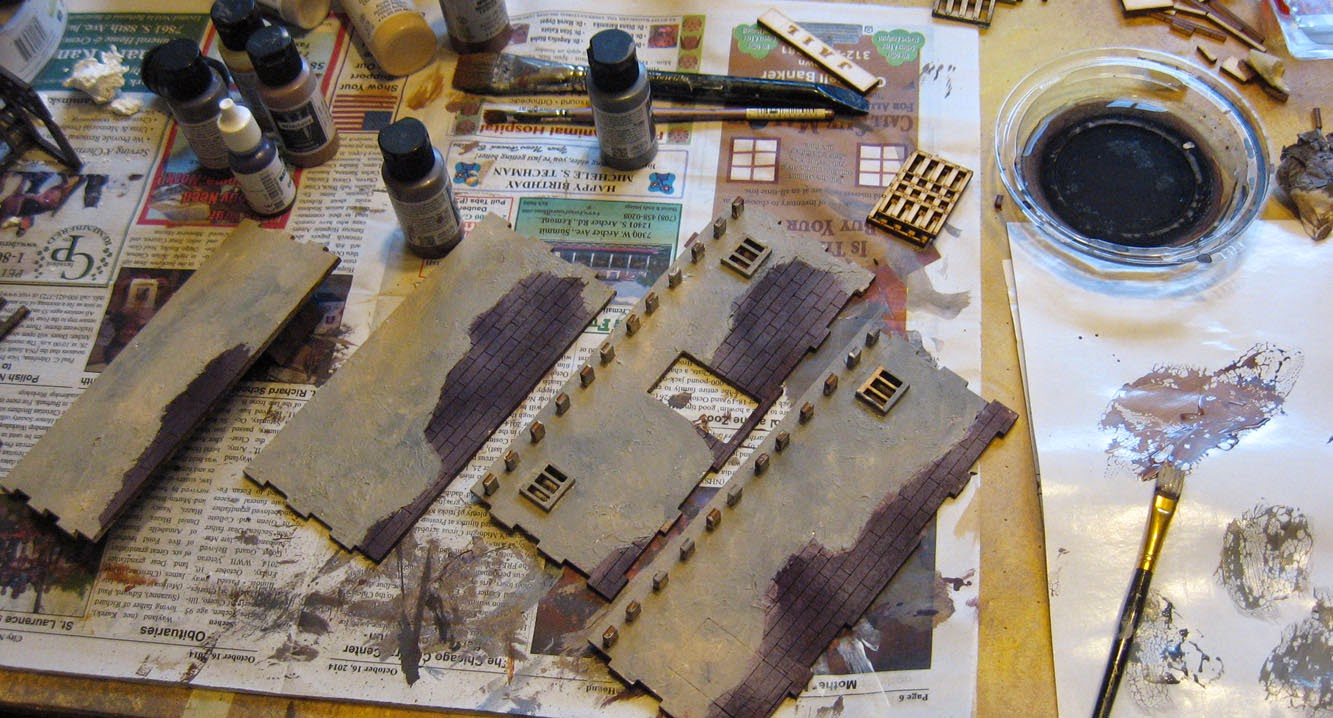 I used a mix of metallic paints and regular colors to paint the window bars. 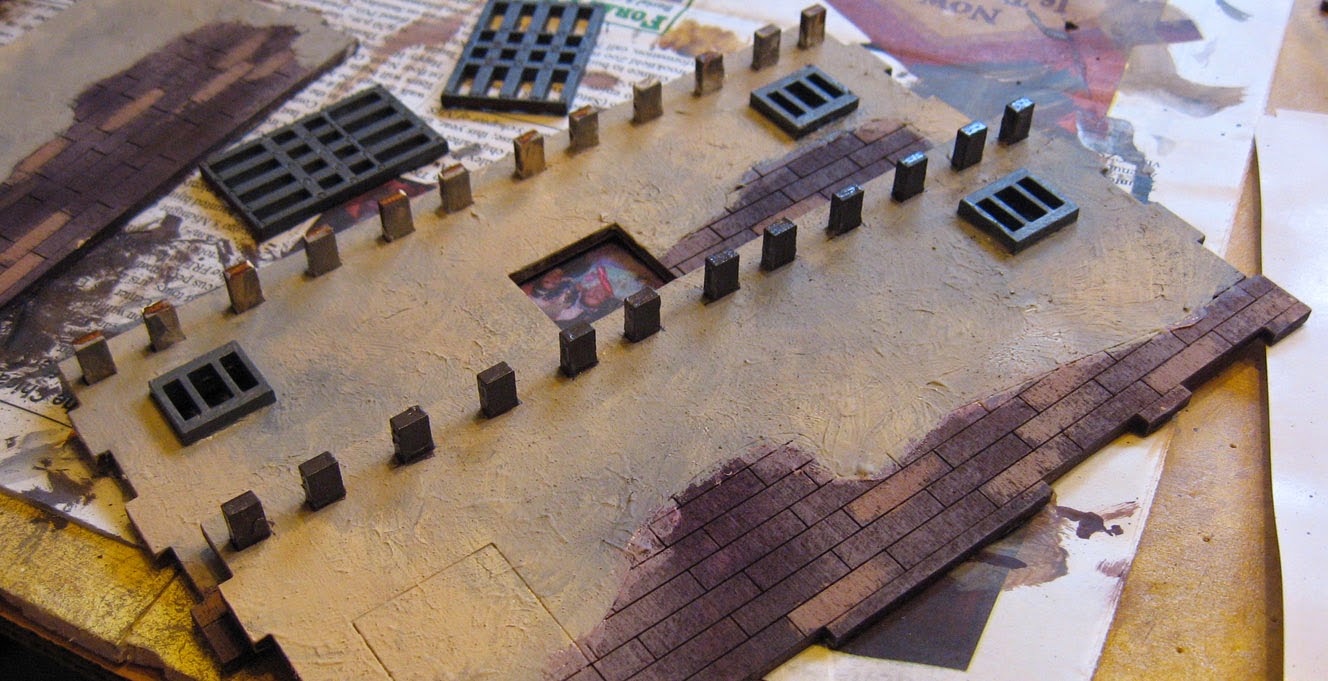 Some preliminary stains painted on... but the majority of that work will be done later with weathering powders.

To hide the corner seams a little more, I applied flex paste to those edges once the pieces were glued together. 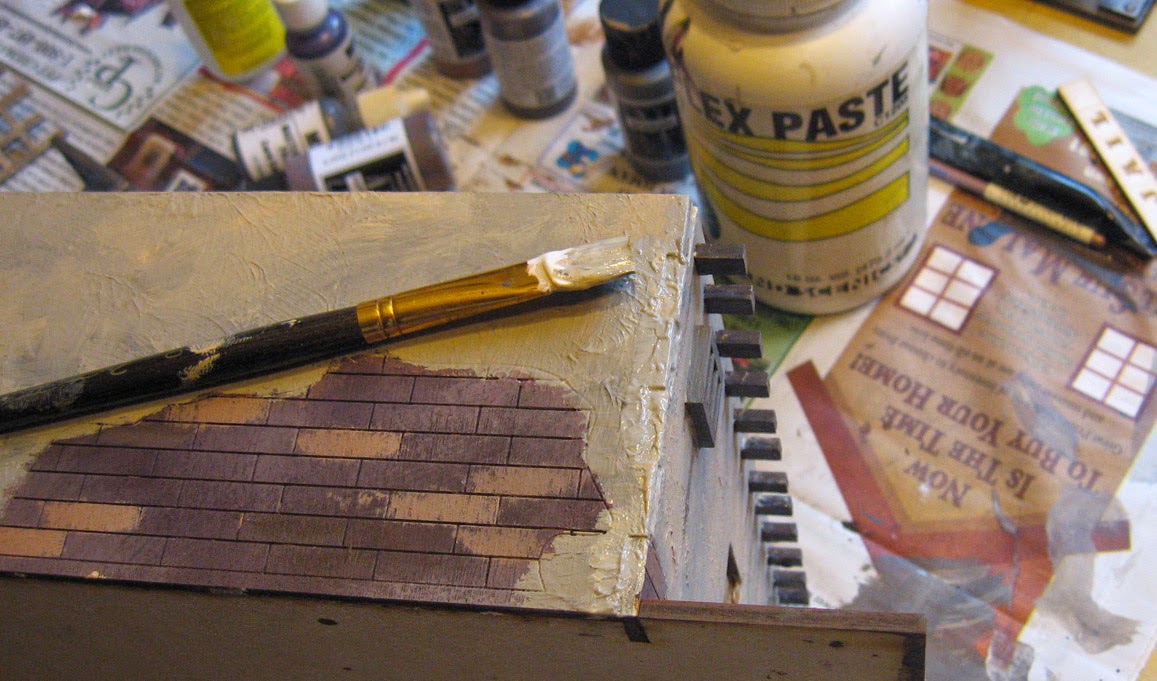 Once the secondary details were added, such as the weathering powders, these seams would be far less noticeable in the stucco areas. 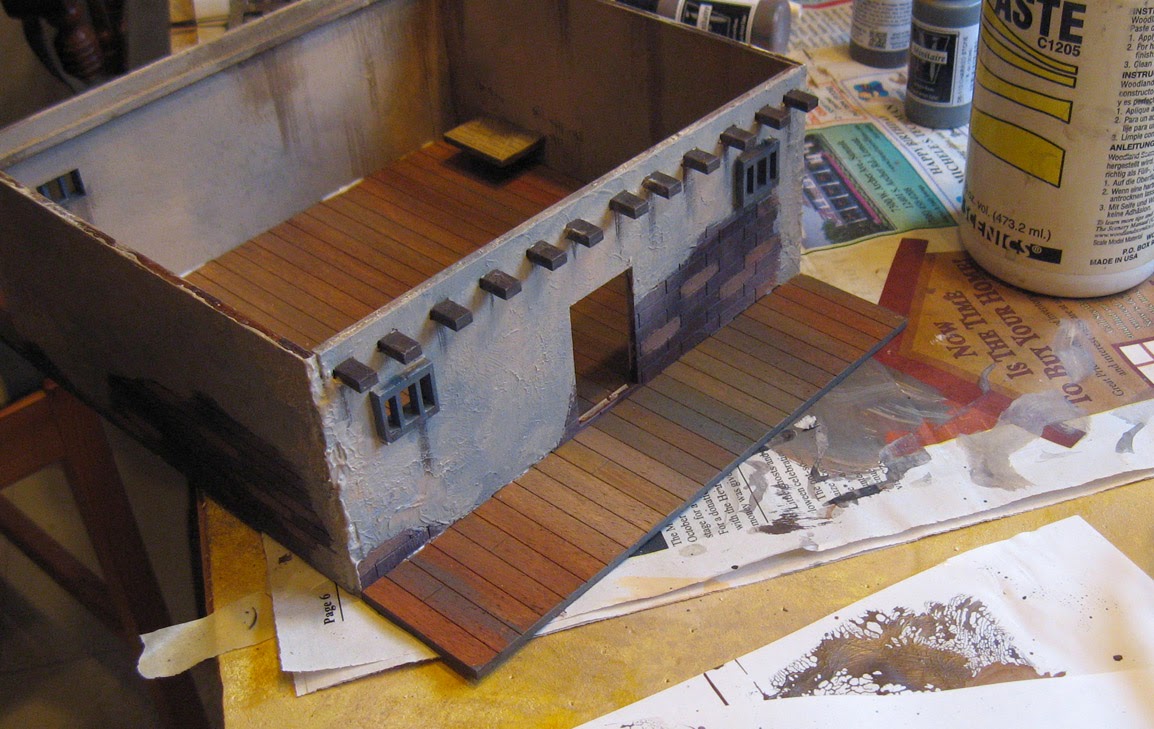 I used a few Secret Weapon washes on the metal bars to tone them down and stain them a bit, and then glued them in place. 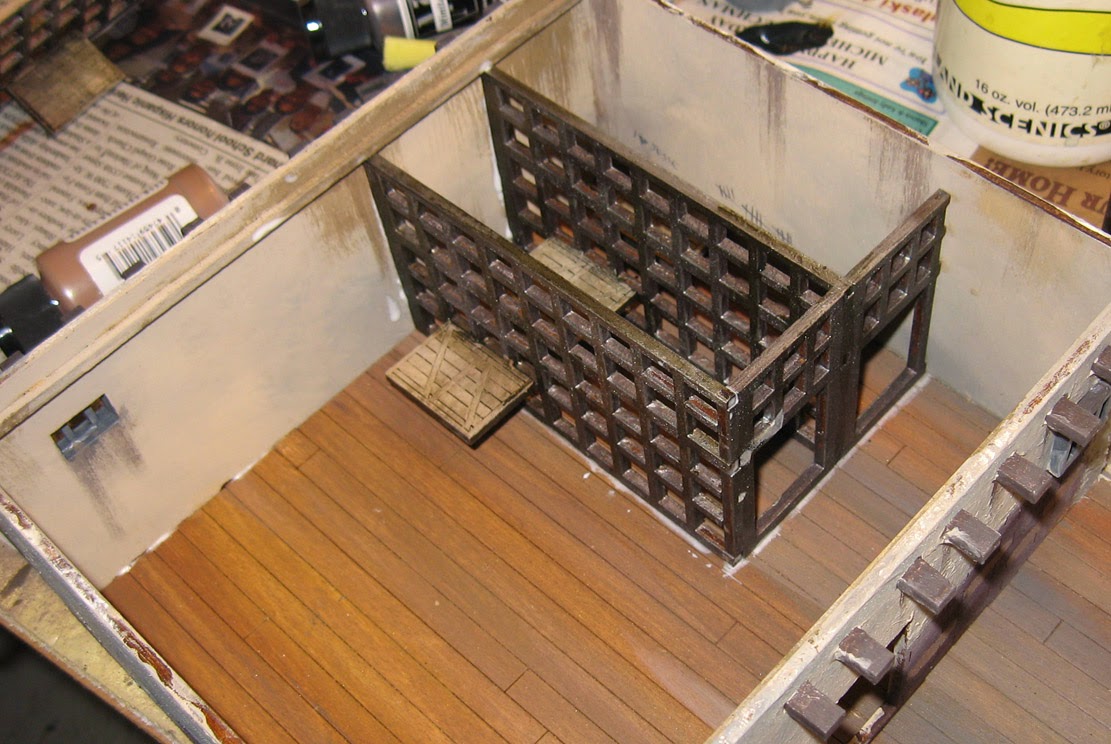 I also made some more variety of shades in the exposed brick portions of the exterior walls... 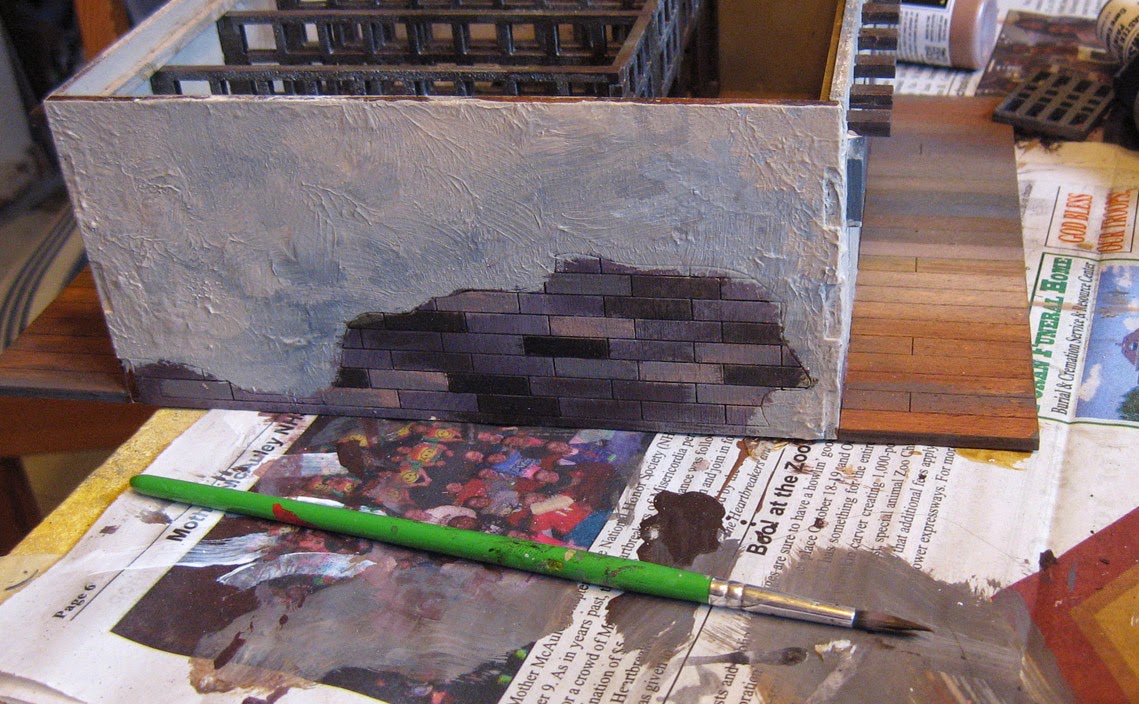 And finished gluing the cells in place.  Stay tuned for the next episode, where you will see all the final details, including wanted posters, added to this fine Jailhouse from Burn In Designs!!! 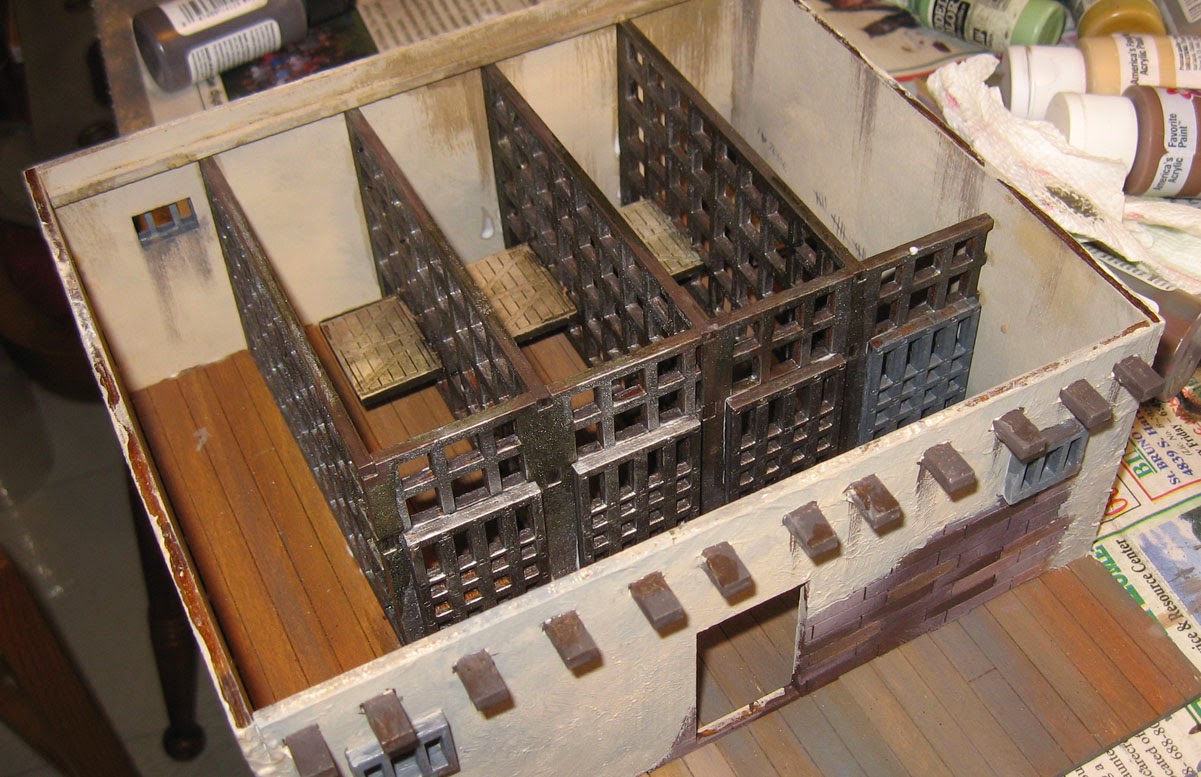