A bit of dust... in conclusion. 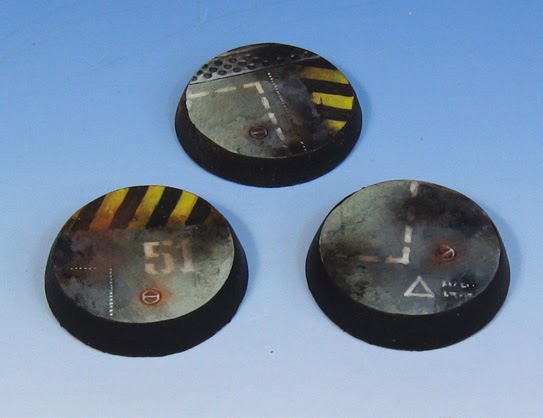 Ok!  Here are some images of the weathered Secret Weapon bases.

I used the Secret Weapon weathering powders to add some effects.  Nothing fancy, just down & dirty. 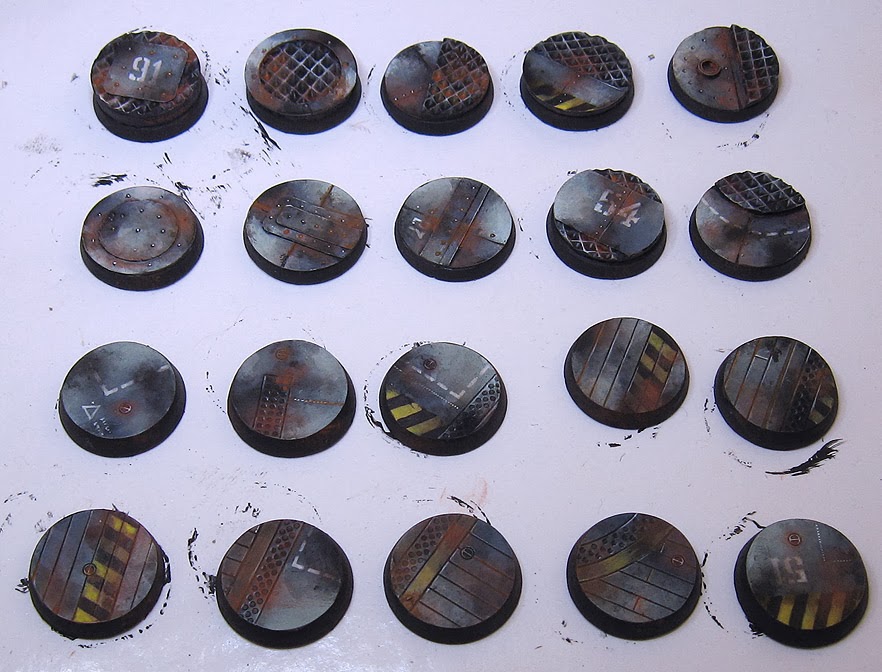 You can mix the pigments together, so I put a few out on the palette.  For this batch, I used them completely dry, forgoing the usual addition of the fixer and rubbing alcohol. 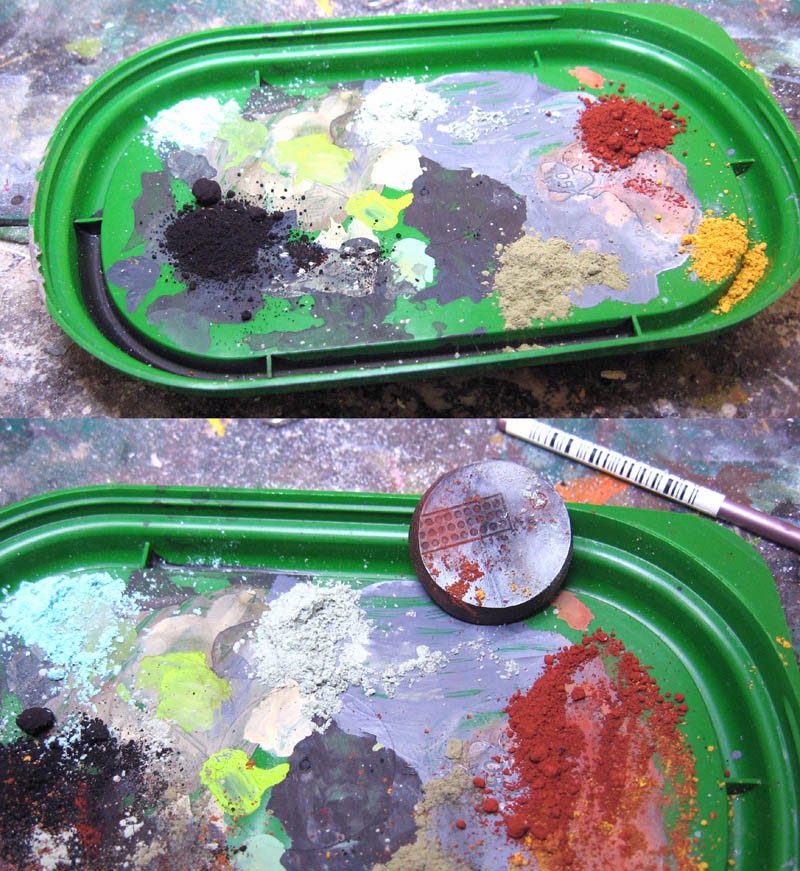 Finished!  A little reinforcement of the edges and some of the freehand. 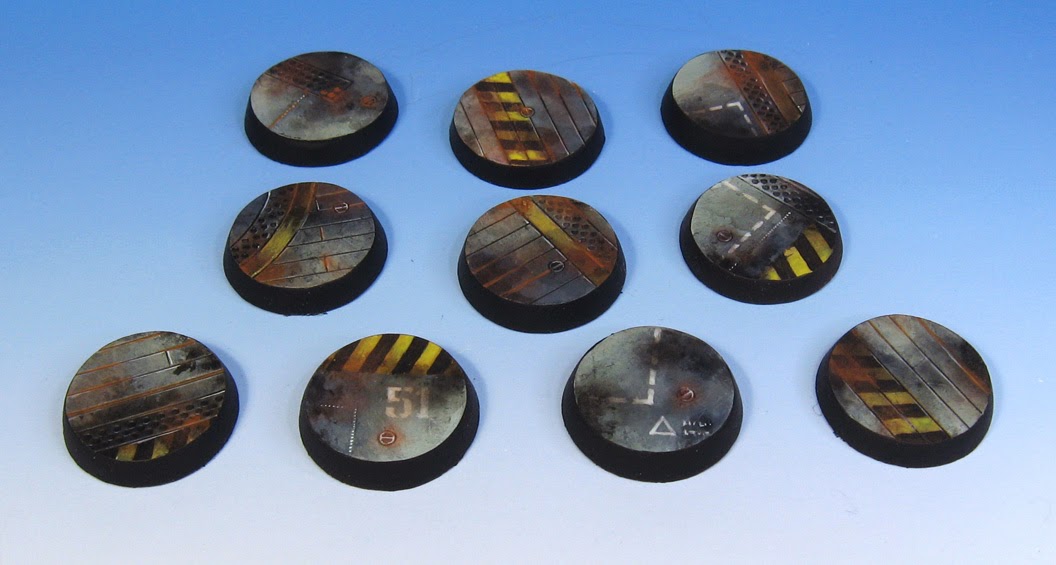 I will probably add more things to these... such as the shell casings!! 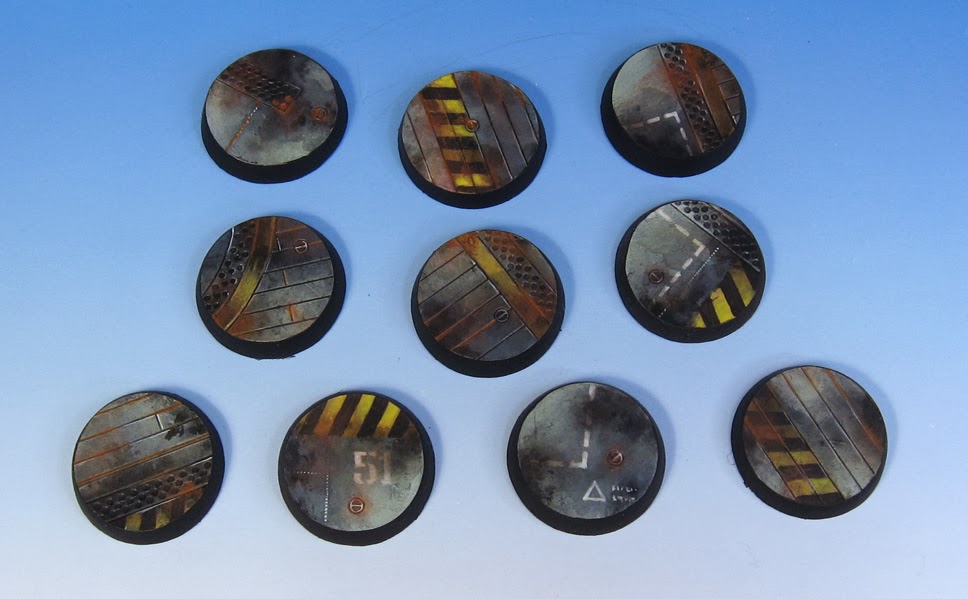 Obviously, it will be very easy to base any kind of miniature on these... no issues with the 'footprints'! 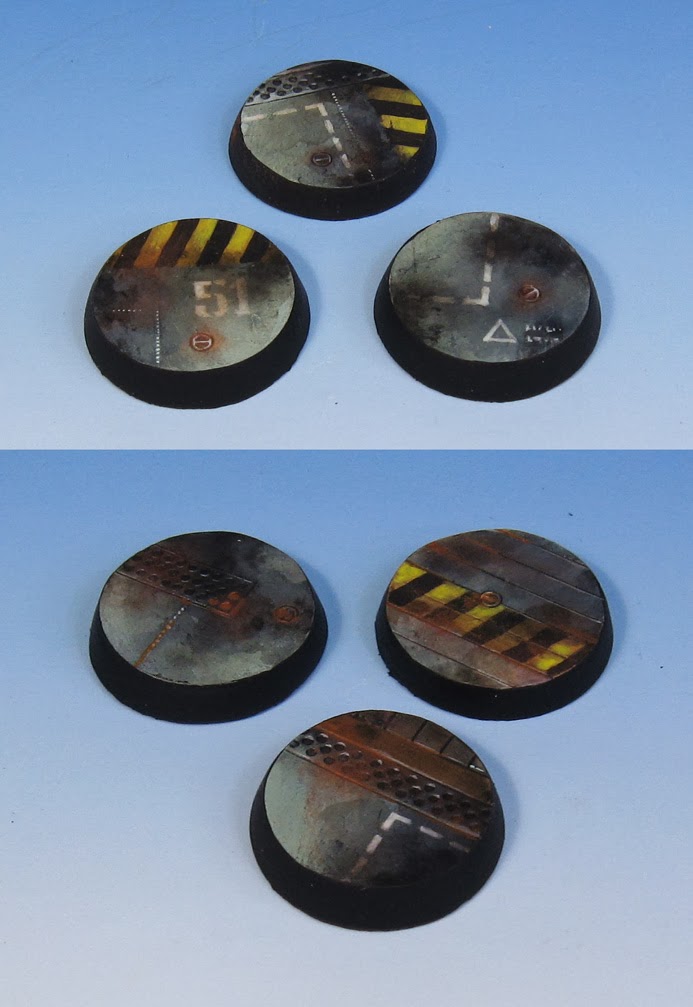 Again, I could have gone way fancier, but went for simple. 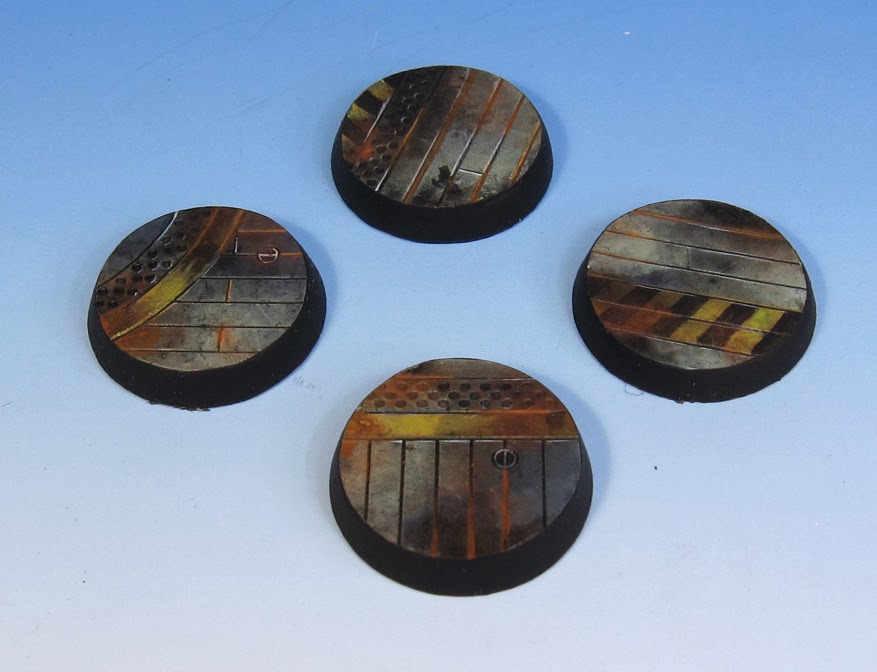 Now for the other set. 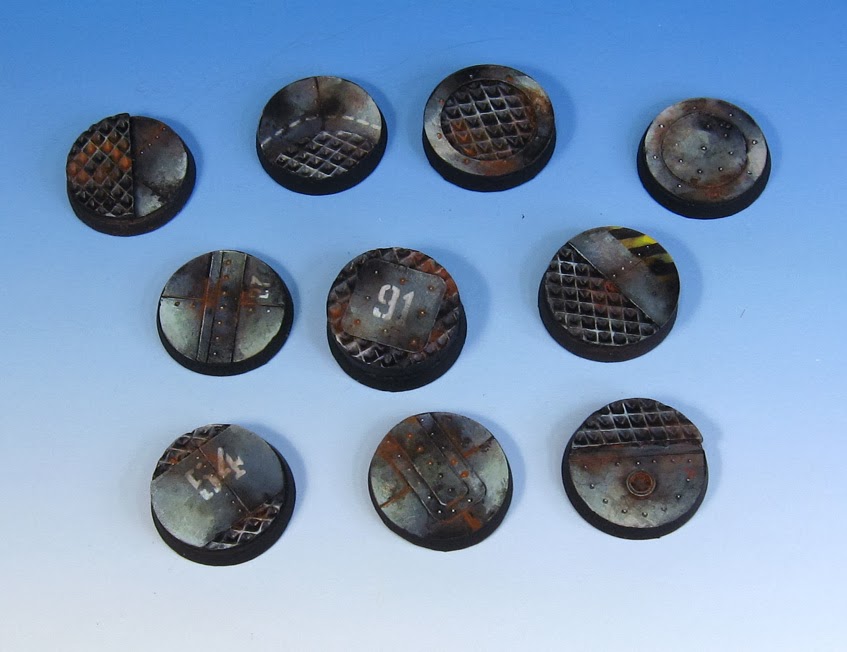 Just like the Flight Deck series, the Deck Plating comes in a pack of ten unique bases. 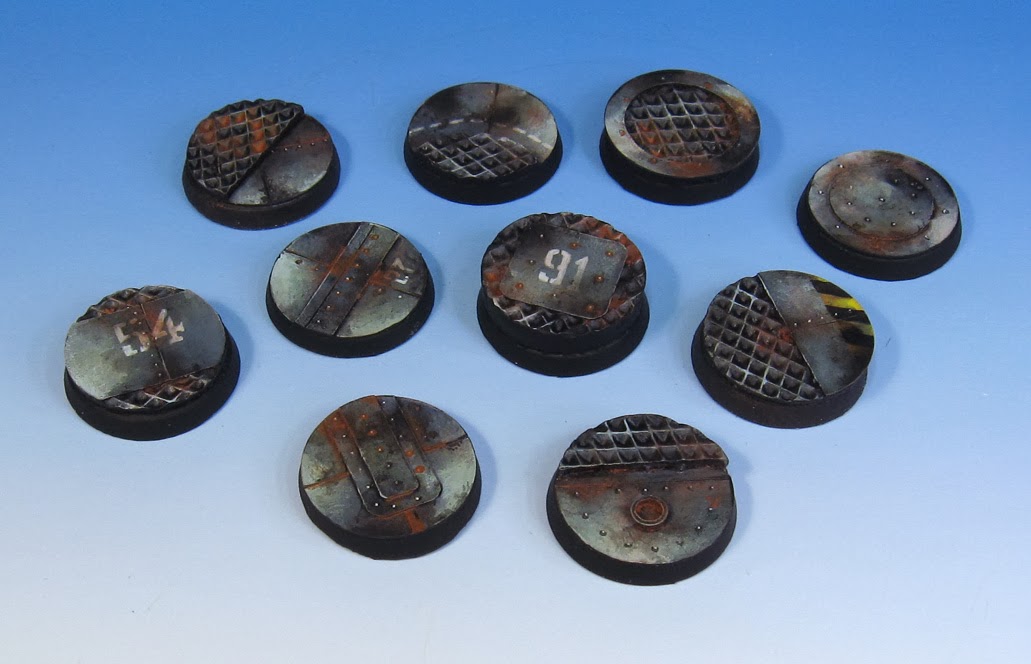 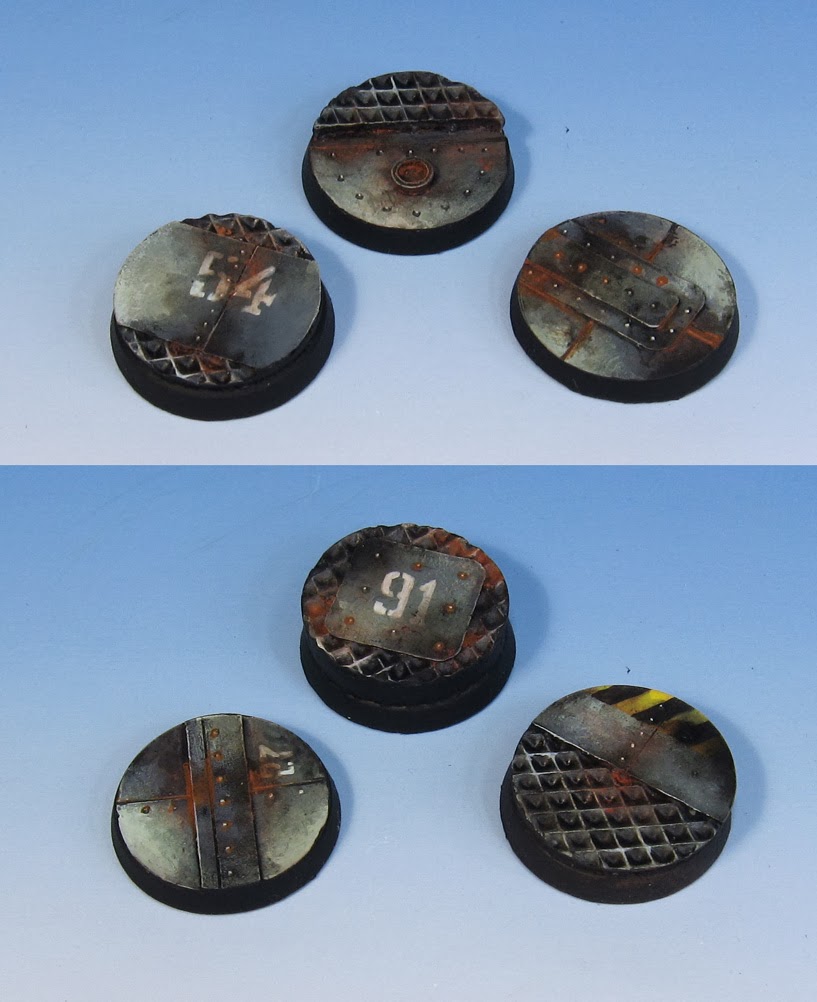 Can't wait to have shell casings and miniatures on these!!! 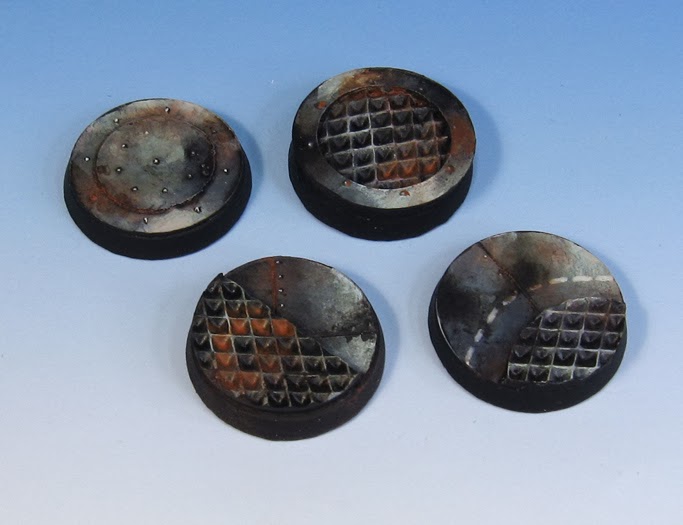 Posted by wappellious at 3:00 PM 8 comments:

Landing on the flight deck... 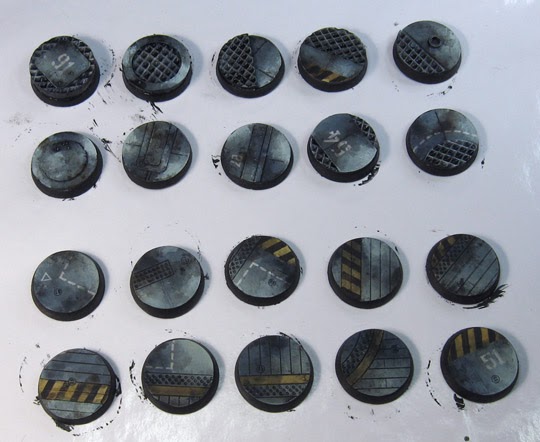 Let the inundation begin!  Starting off the Secret Weapon product splurge with a few base sets: 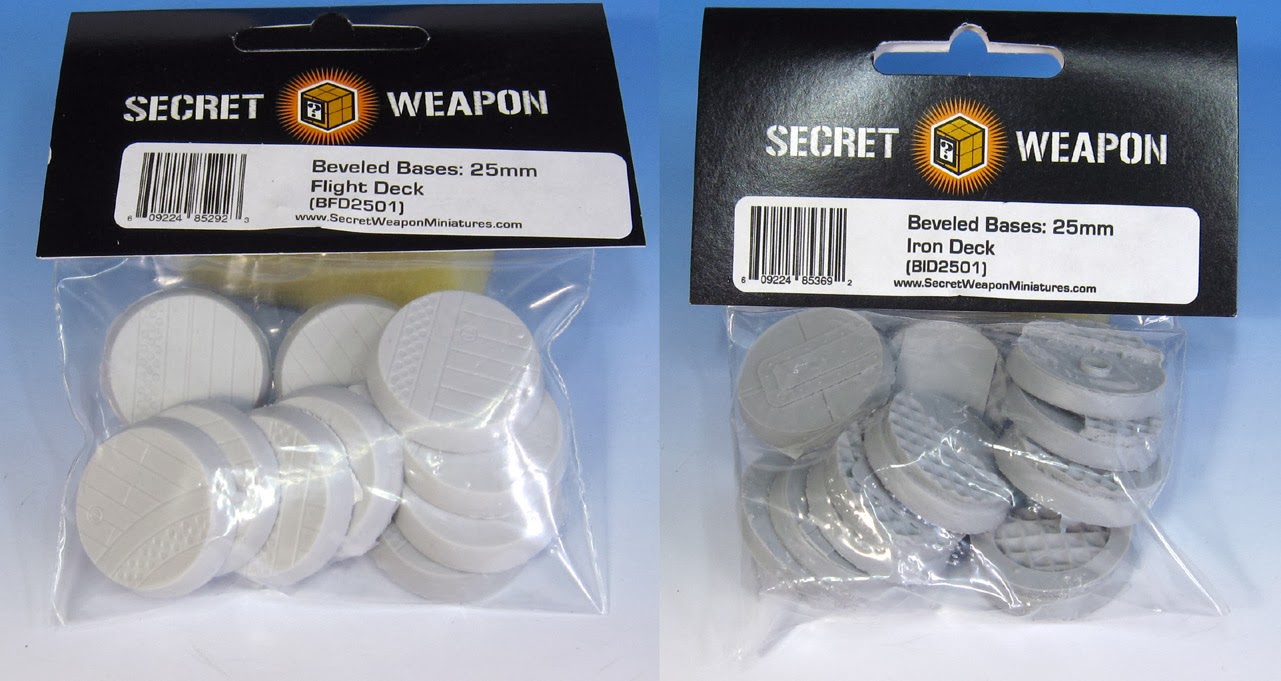 First, they are in sets of ten.  Like squads. Yes. Not the mystery packs of three. :-)
As you can see, ten different designs. 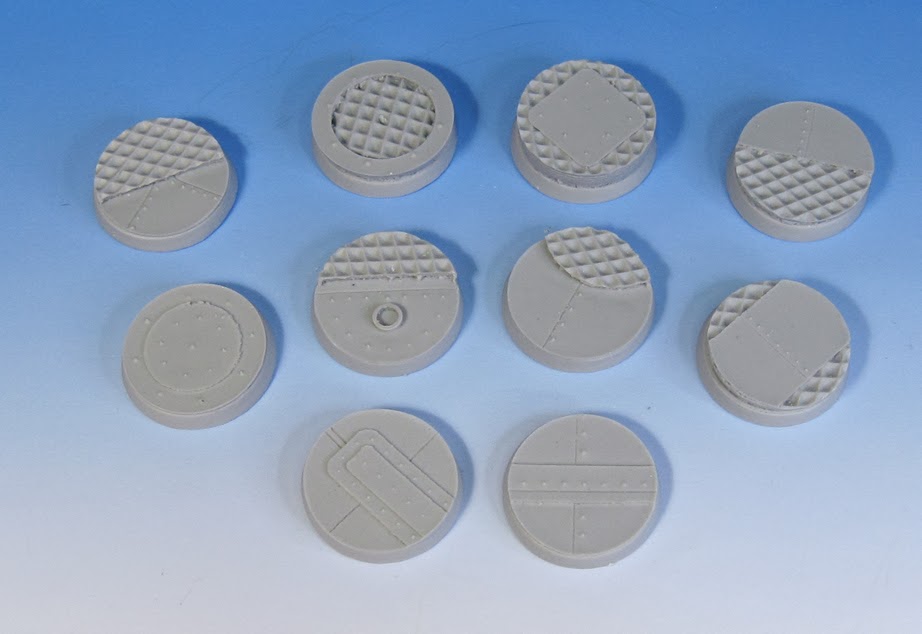 Even better.  No need to spend hours farting around with soap and water.  A special mould release is used, which means you go direct to priming, like I did.  I was working with my brush on primer, like normal, and it was just fine!

That is ace, since getting back the time I have spent washing other entity's resin pieces, I might average more than 3 hours of sleep every night. 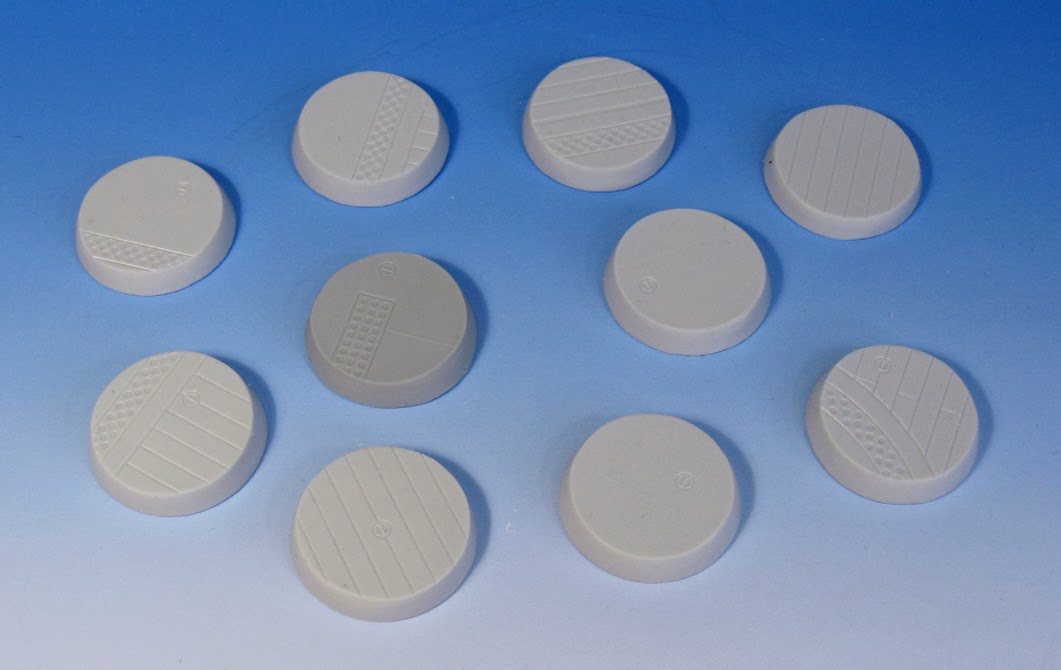 These sets begin with the Shaded Basecoat, just like any other miniature.  The concept is to start with the middle tones and work your way lighter.  The colors are kept simple.  Never more than 3-4 on the palette.  Work very fast and loose. 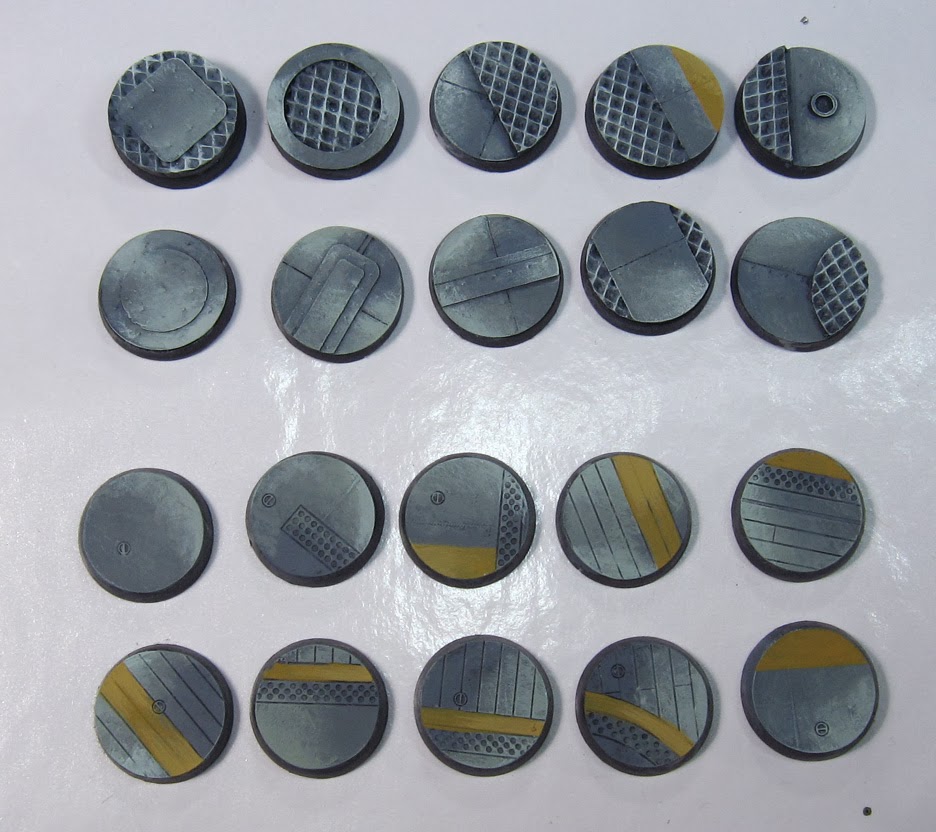 With the shaded basecoat complete, I threw on a bit of freehand here and there. 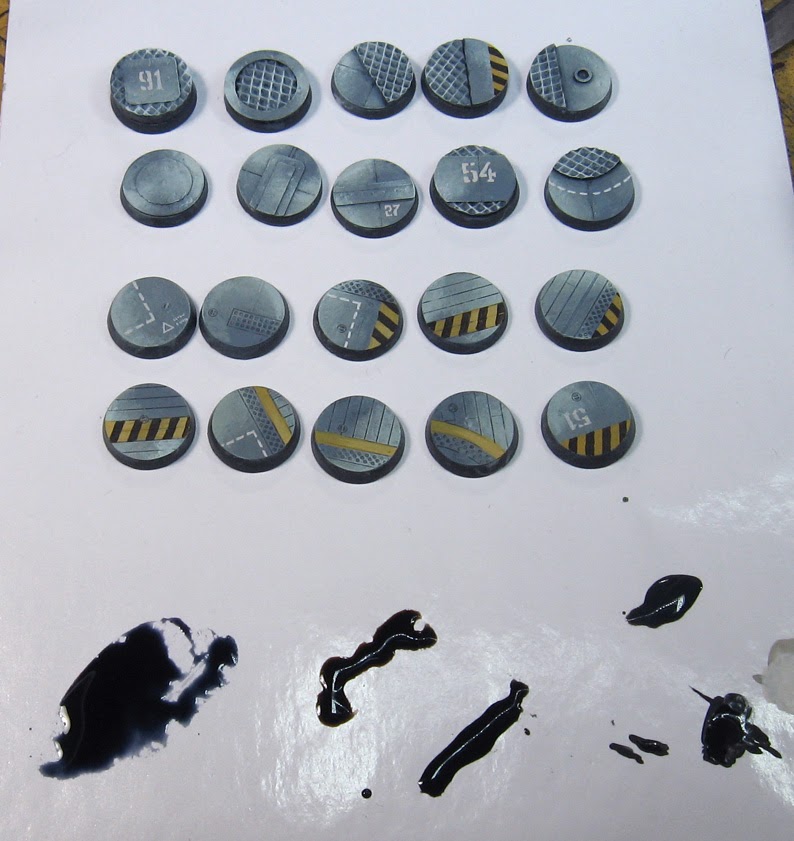 I put out a few Secret Weapon washes, and set down to glazing! 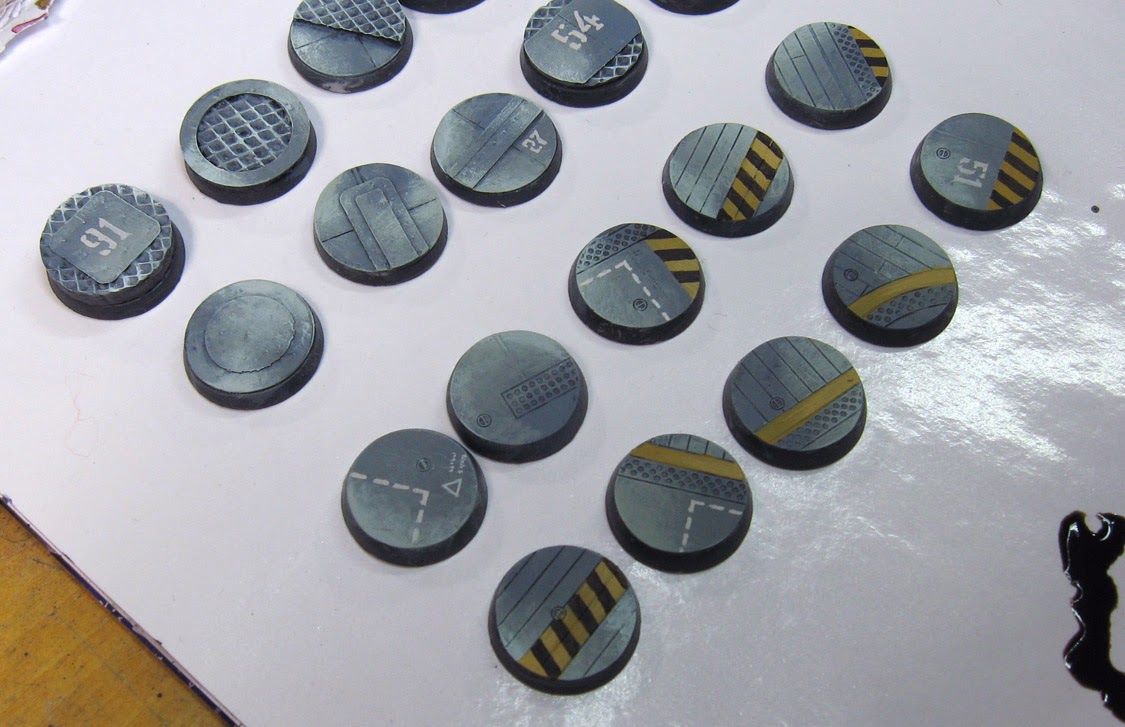 Glazing on bases is extra fun, since I can go nuts applying and removing glazes.  I will use either a beat up craft brush or even some tissue for that.

Remember, vary those glazes!  Go from blues to browns to even green or reddish yellow. 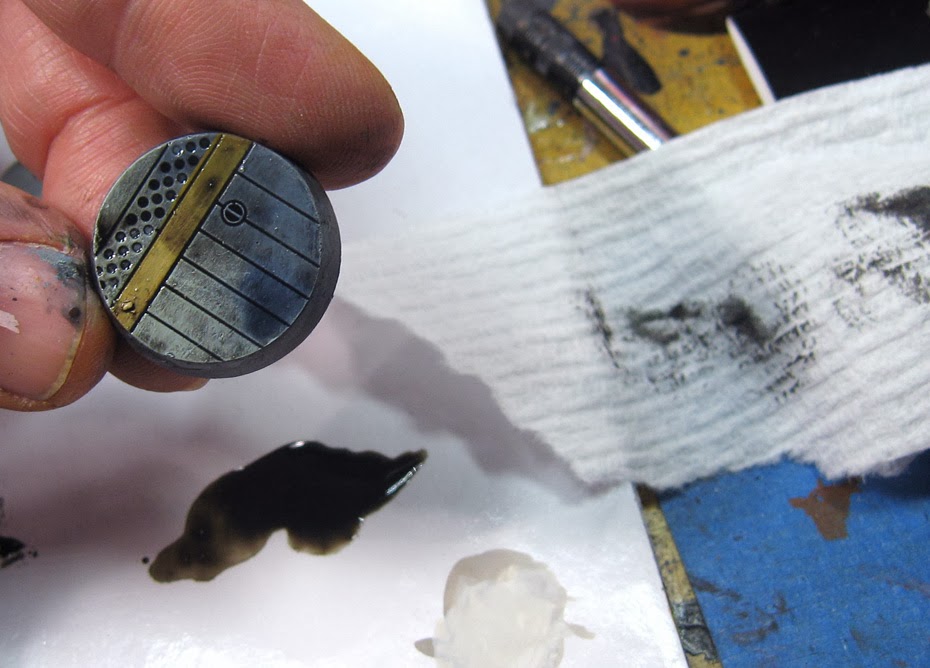 The first row with the first glaze application.  You can already see the difference.

Don't be afraid to use your fingers to wipe away the glaze.  I did that over the black caution stripes to try and pull off some of that paint, making it appear worn away!  Much easier than spending hours attempting to paint that effect. 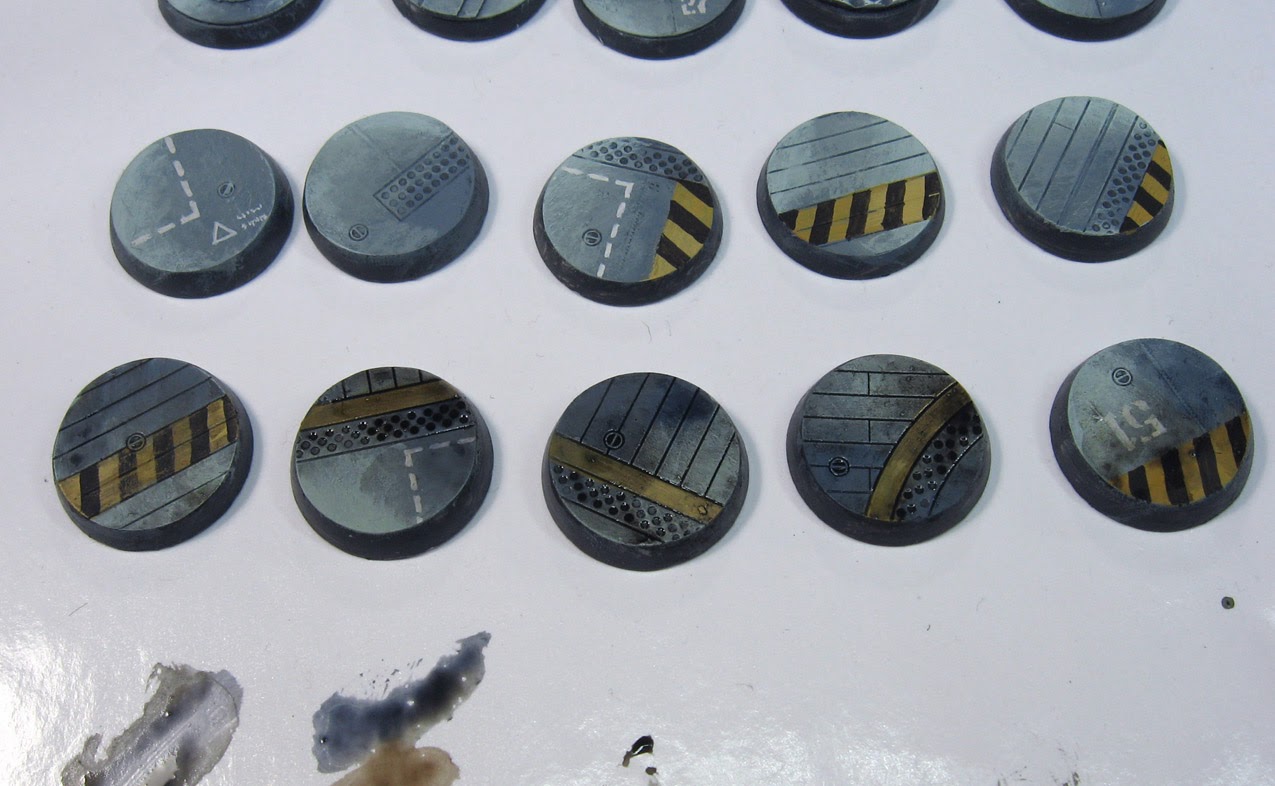 Here's the beat up craft brush in action.  Actually, I used another one of these brushes that was in a better condition to do all the other work you saw previously on the bases.

I am dabbing away at applied layers, poking at the edges, trying to make some softer by blending them out to parts of the base which didn't get any pigment at all.  In addition, you can try to create hard edges, or something that looks a little like an oil splatter, etc. Now for an image that was taken after 2 layers of glaze was applied.

More to come!  I will be using some weathering powders (guess who's!!) to create some rust and other effects. 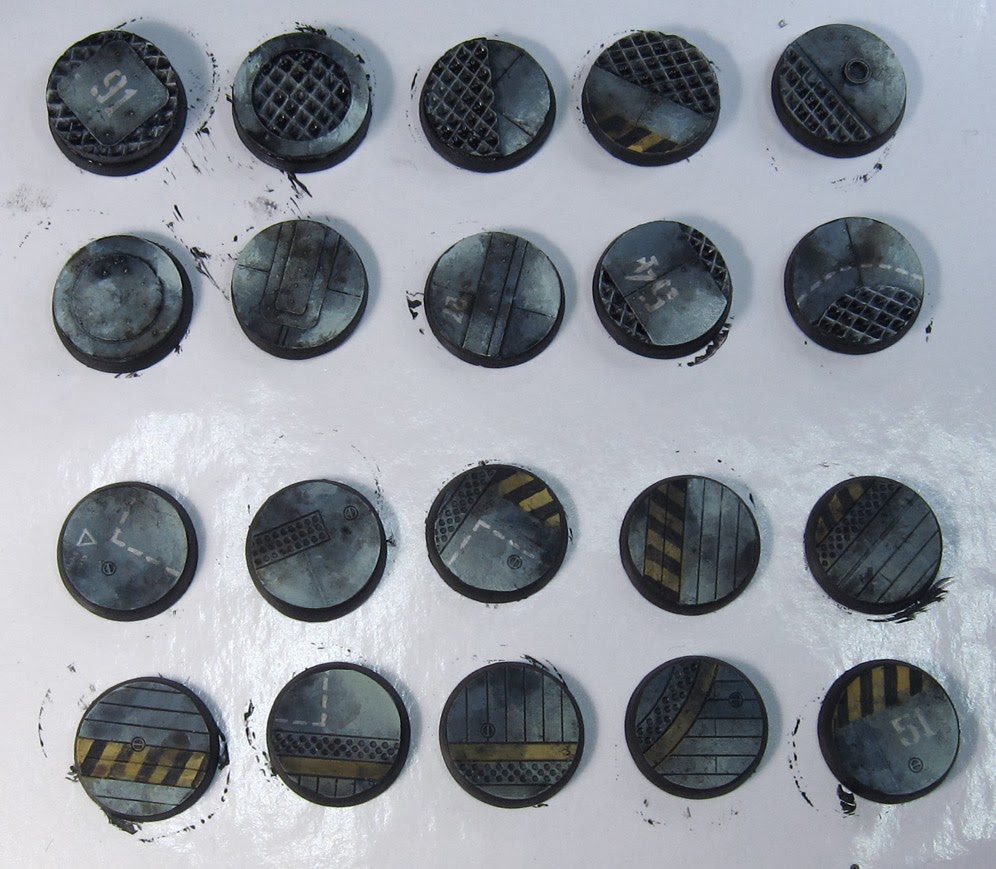 Posted by wappellious at 1:44 AM 4 comments: