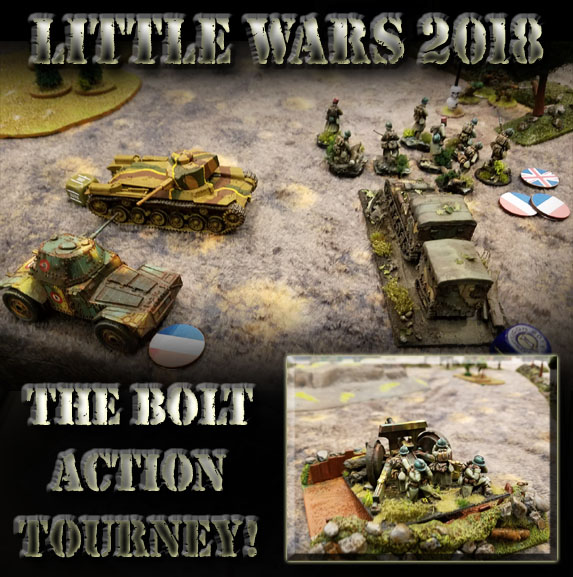 A few weeks ago I took part in my first tournament in 4 years, and my first Bolt Action tournament ever!  You have seen all the posts leading up to this moment on the display board, titled "The Road of Life".

This harkens back to the Battle of Verdun, and the French reinforcement/supply route to the battle, which was called the Road of Life.

It was a "what if" army... trying to discover what may have happened if the mobile French units in the north had attempted a major counter attack against the Sickle Stroke maneuver of the Germans. 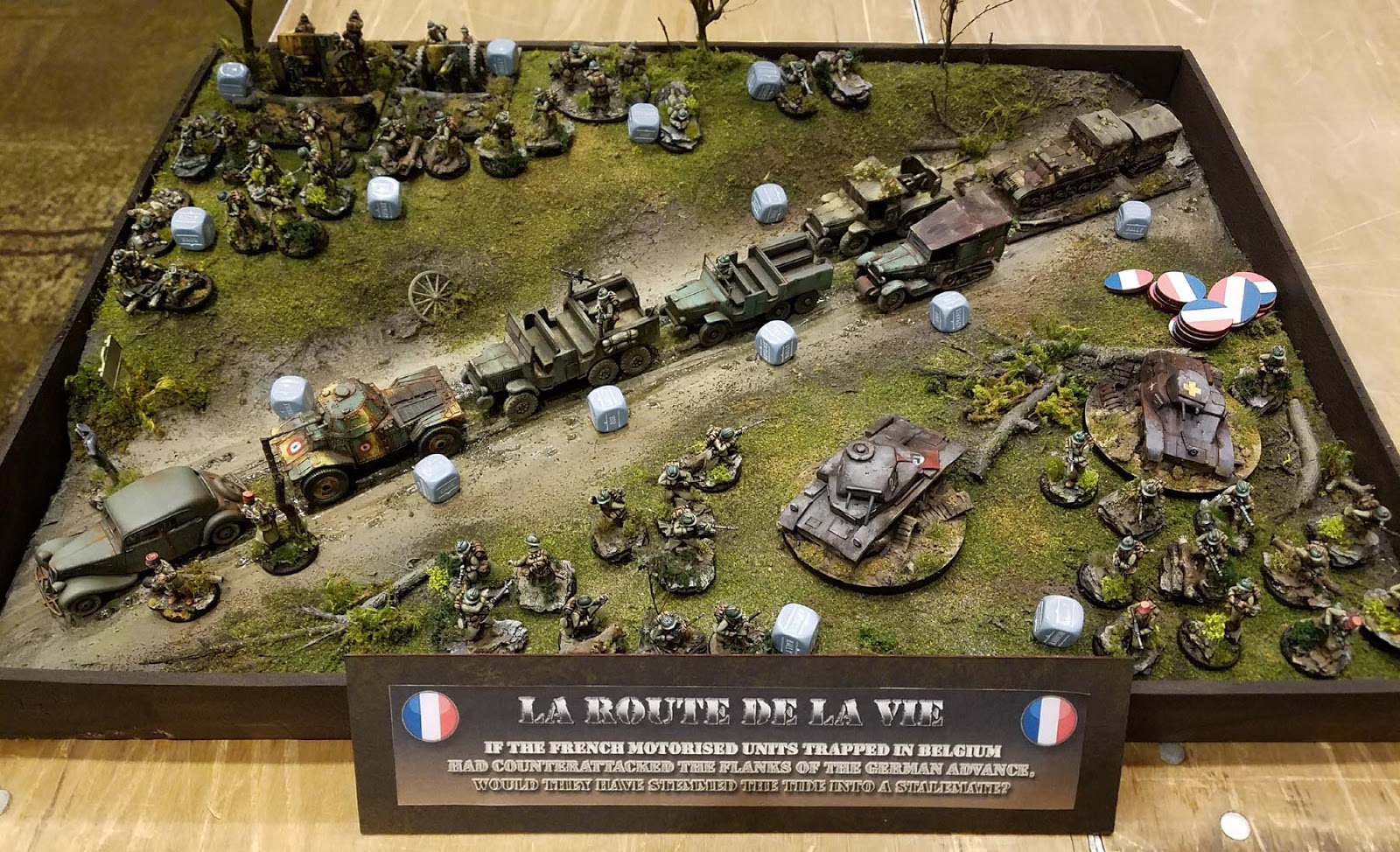 There were not many players there, since very few of us knew about the tourney at all, or not until the last minute.  The first battle would take place against Waffen SS, who somehow managed to get their hands on advanced assault weapons in 1940!

Each side fired a prepatory bombardment before the game, but clearly the German gunners were more accurate, putting many pins on the French forces that had to deploy.

As a result, the French commanders spent most of their time rallying units to remove pins, as the German invaders went on foot through one side of town. 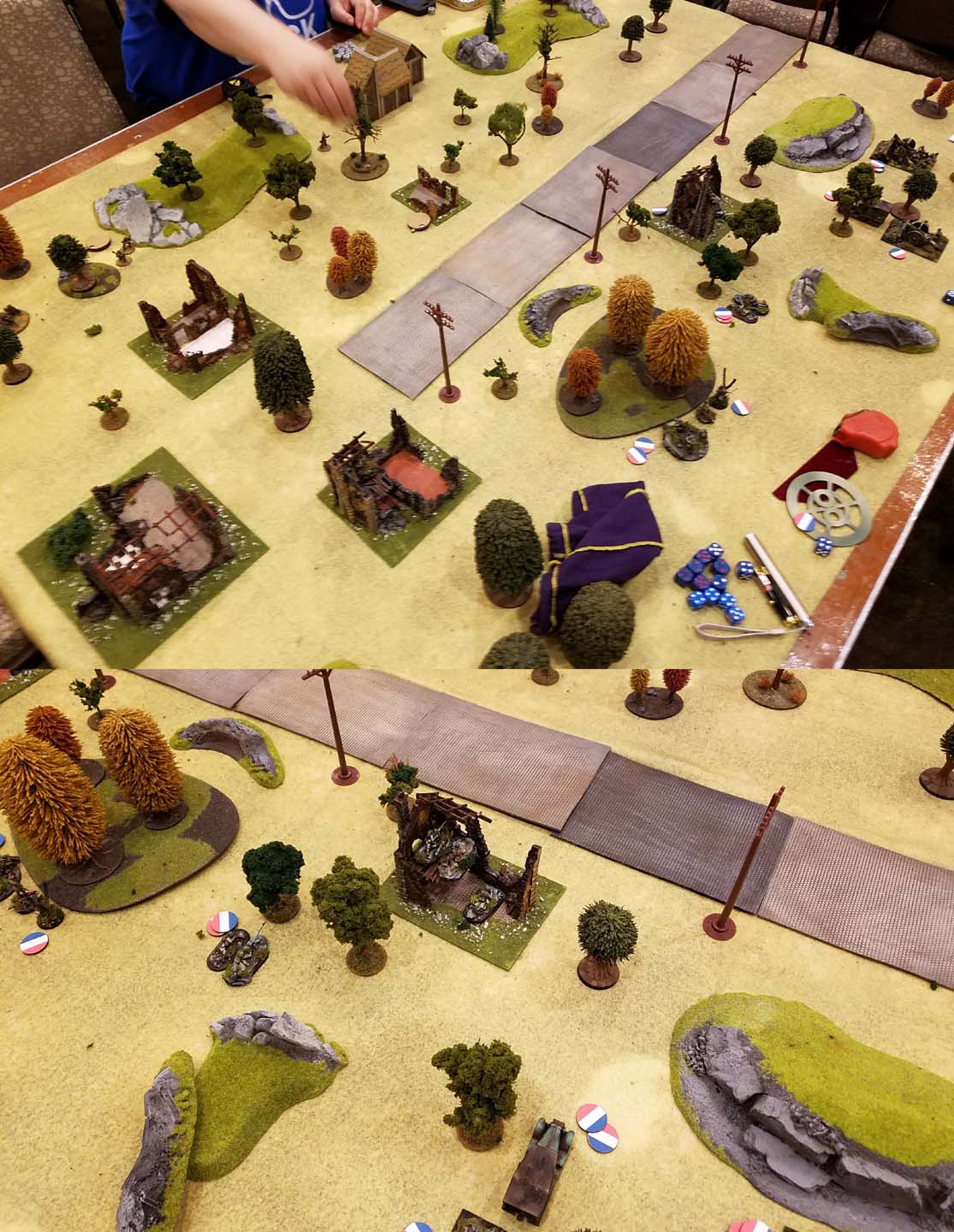 Little did they know that behind the line of French artillery were the main group of mobile units!  These began to surge onto the field, and immediately peppered the Wermacht forces with long range machine gun fire!

The Lorrain transport lead the way, as it was fully enclosed.  The ranges of the assault weapons and anti vehicle weapons could not compete with the mobility and firepower of the transports, which would be critical. 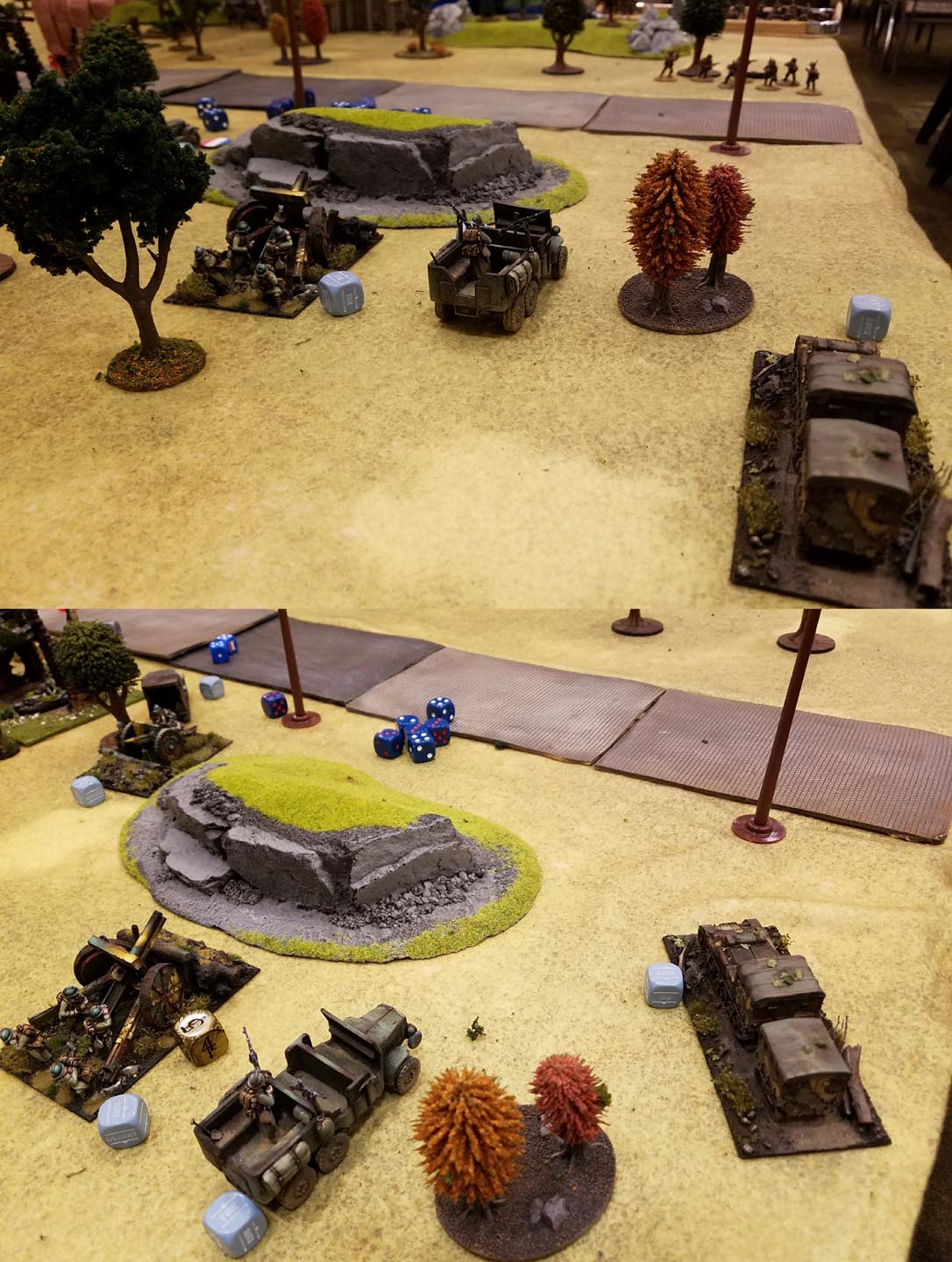 Despite all the casualties, the Germans continued to surge forward.  Their Captain urged them on, using multiple snap to orders.

The German sniper and machine gun team could not remain in one area for long, as the French guns would constantly hone in on their positions!  A particularly brave flamethrower team attempted to cook the French Sniper team, but they also managed to survive for a while.

While the Captain had managed to advance his troops across a broad front, they were now relatively exposed out in the central streets of the town... 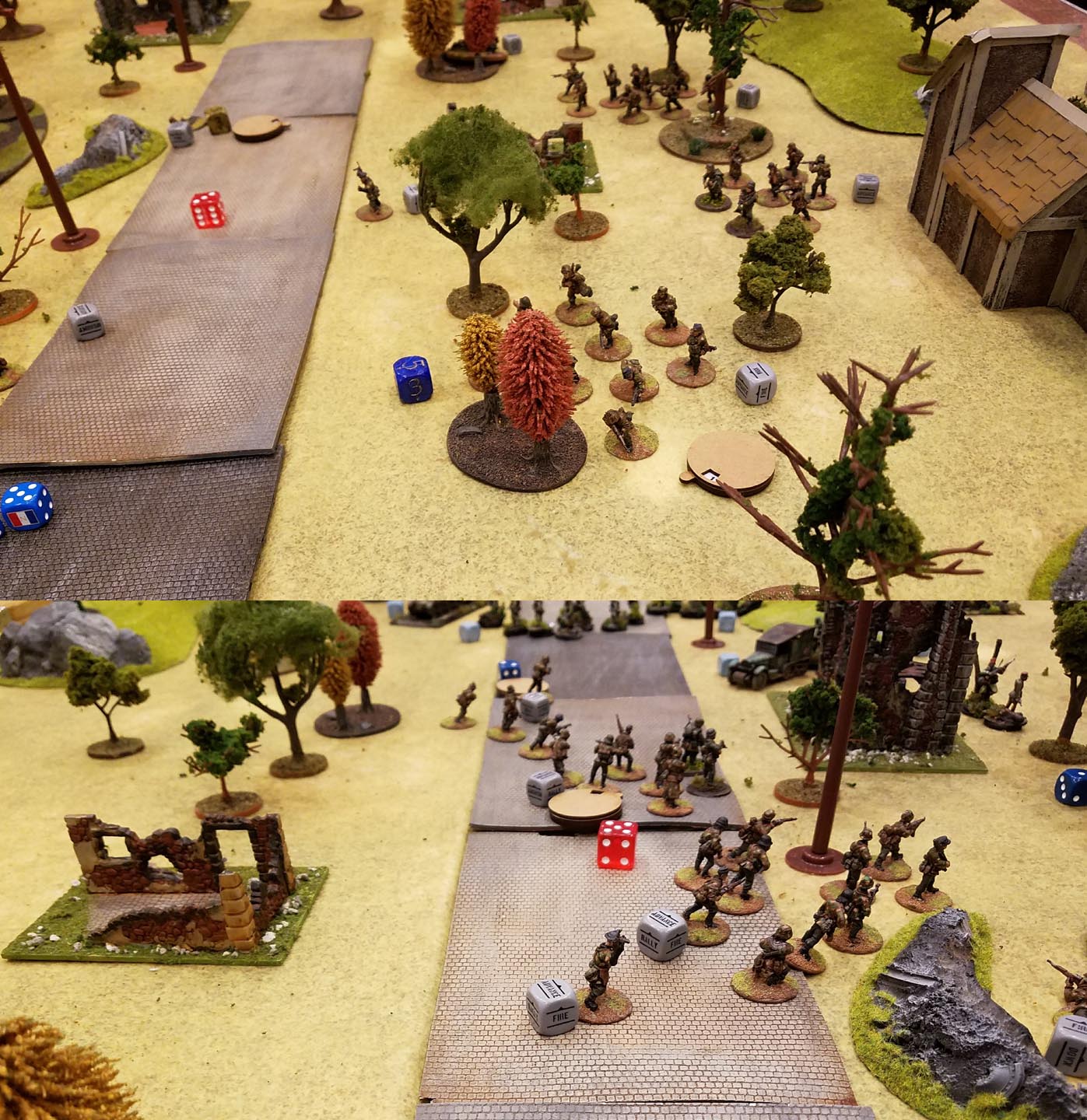 It was at this moment that the mobile French troops pounced, dismounting from their transports and adding more small arms fire to the rain machine of gun shots.  While this did not kill as many of the veteran SS as you might think, the pins were certainly starting to add up... making even the most battle hardened soldier begin to waver. 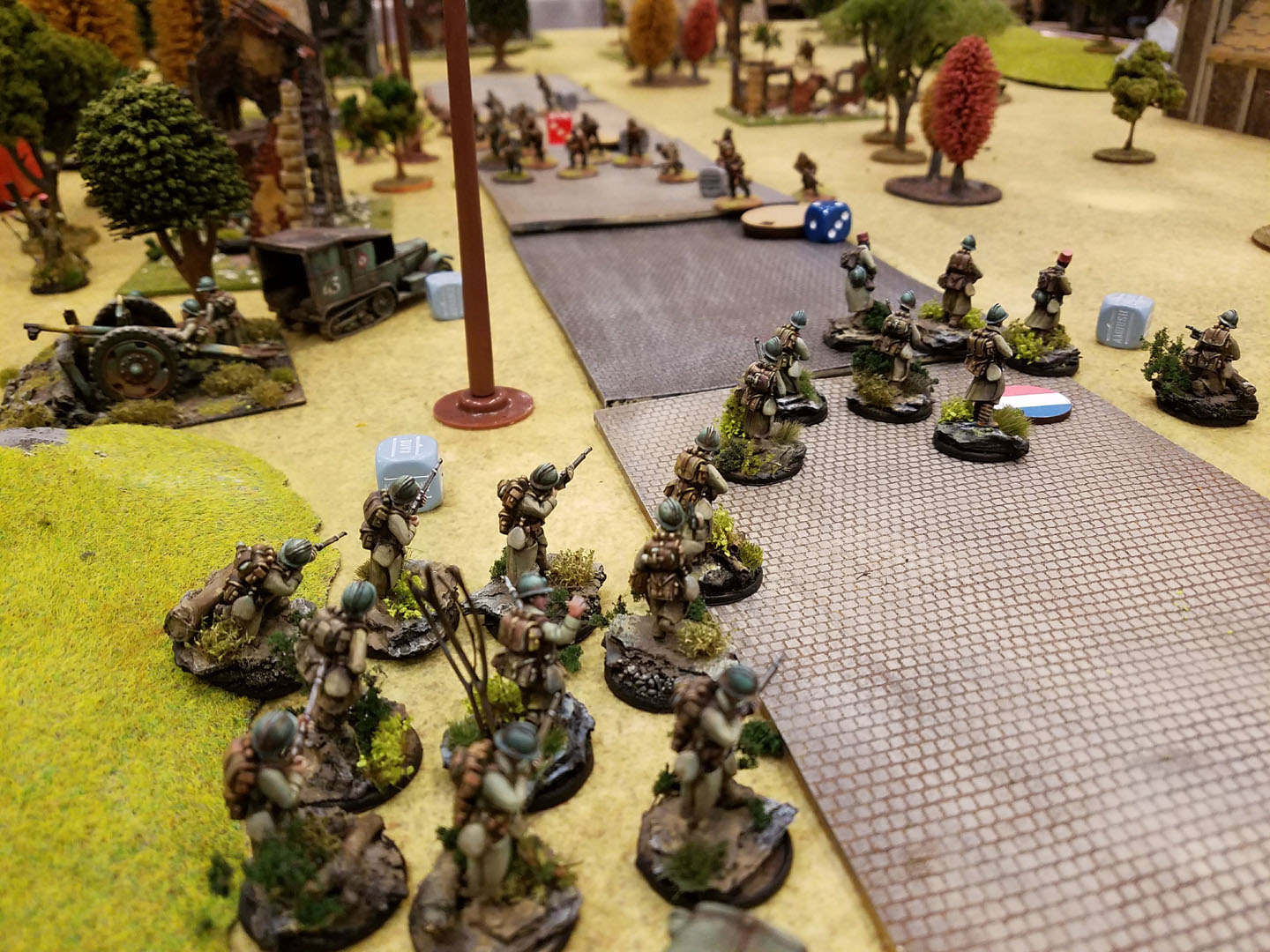 Seeing so many of their brothers in arms gunned down in the streets must have had an effect on the fighting spirit of the SS, as the Panzershrek team failed to assault the artillery observer!  They were starting to earn their nickname of "Asphalt Army" after all... 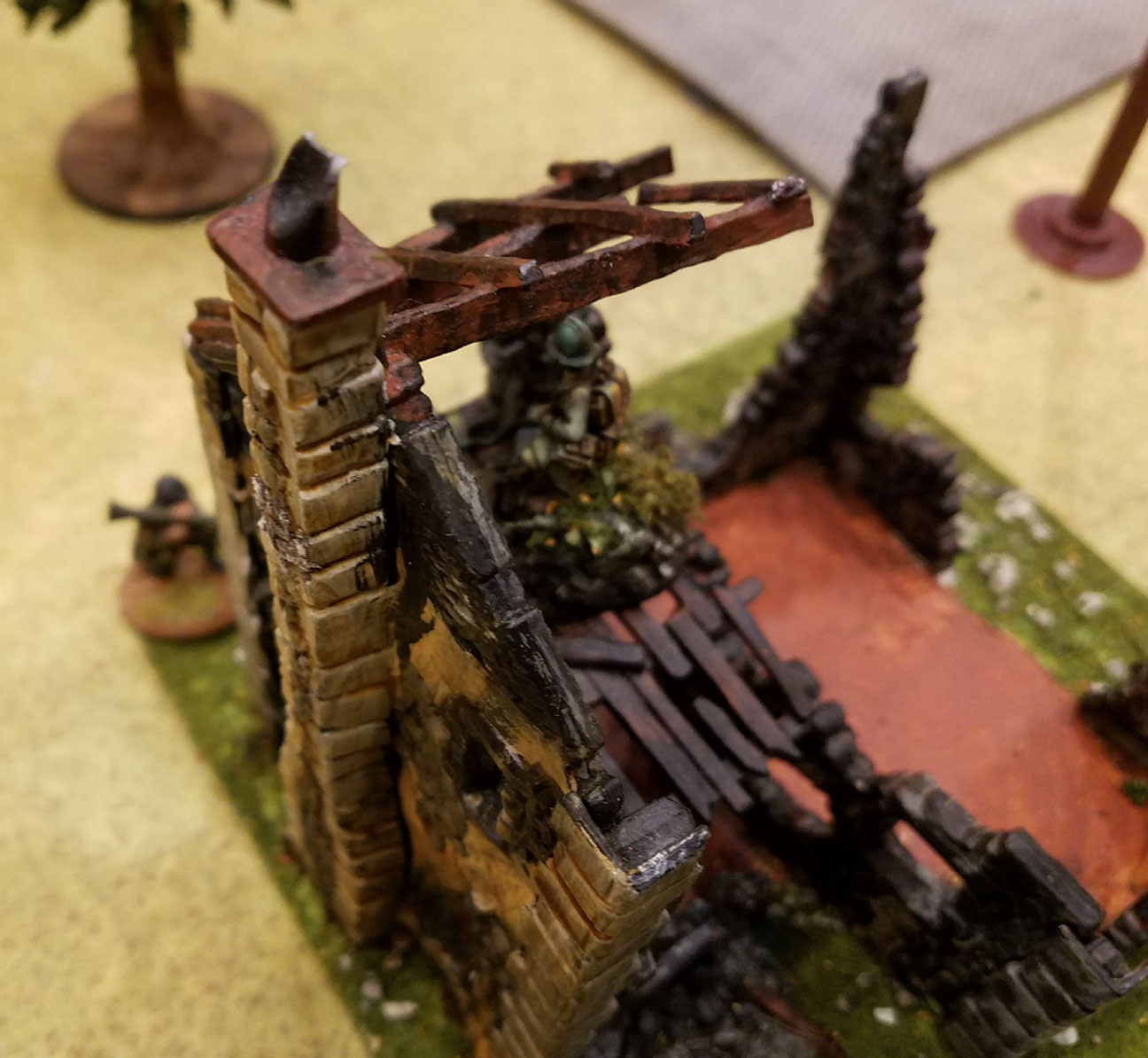 In the end, the German attack was called off, leaving the town in the possession of the French.  Perhaps more training on those new assault rifles would be necessary! 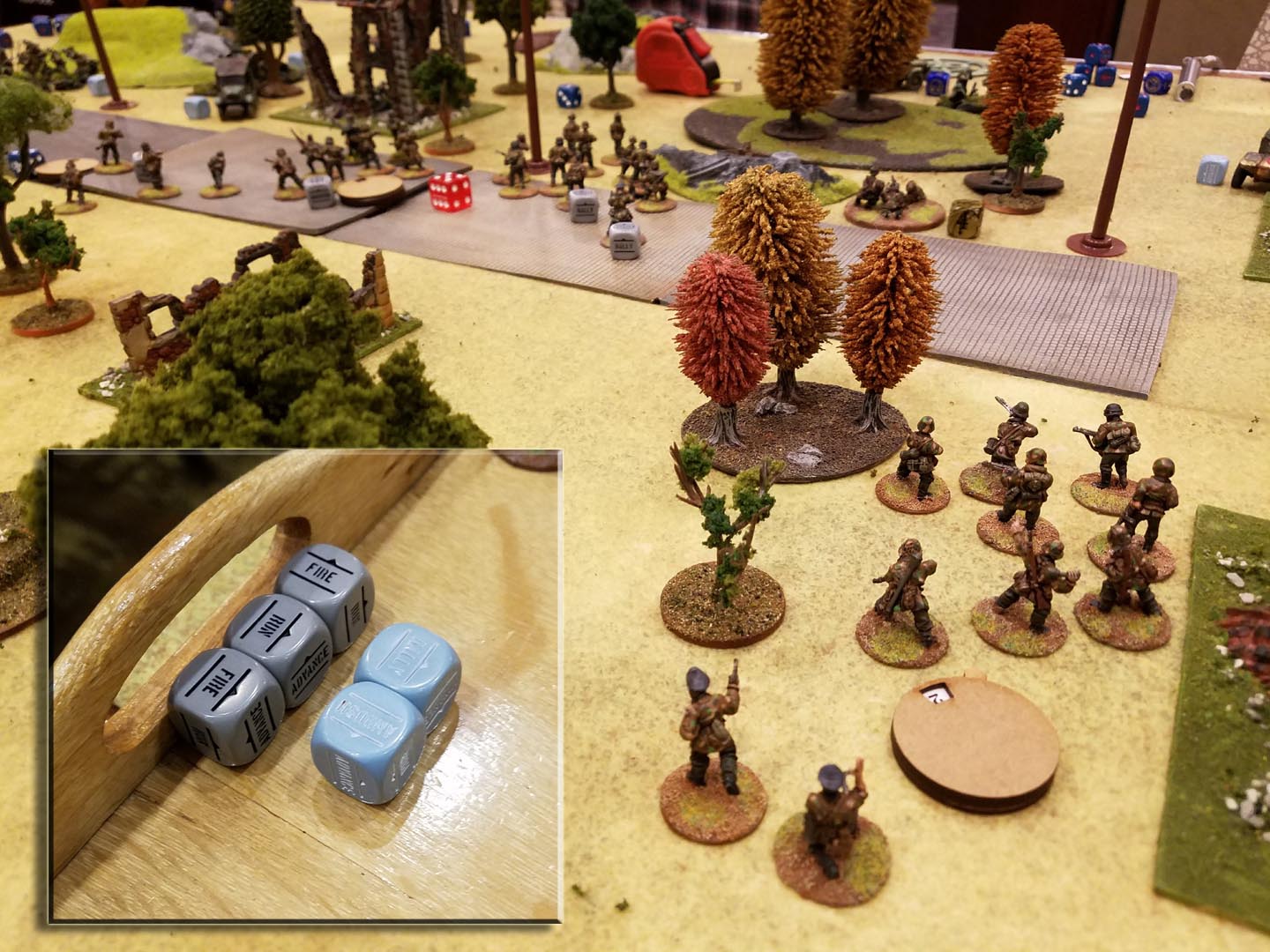 The second game apparently took place in French Indochina, as the Forces of the Republic would square off against those of Imperial Japan.  They must have been fighting over some kind of temple garden, as there was an unusual formation of trees and walls that would curtail line of sight drastically! 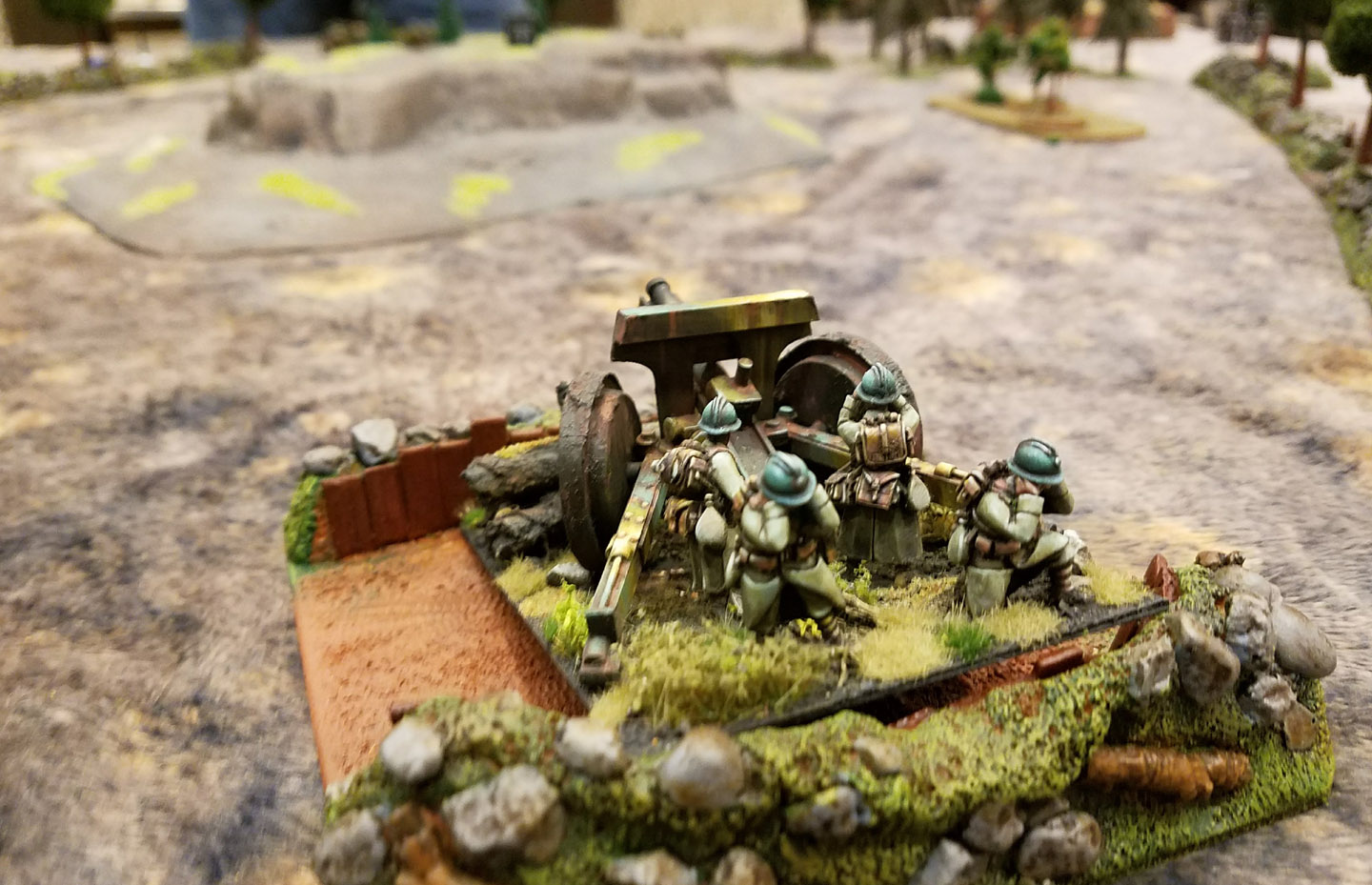 As reinforcements were allowed to come on from either table side by the second turn, both forces attempted to take advantage of outflanking maneuvers.  These could be done without any interference from units in the center, as the tree lines and walls blocked all line of sight.

The French attempted to control one of these flanks by placing several units in ambush for a few turns.  The veteran Japanese troops would be hell bent on charging their foes en masse, so the commander made sure that hordes like the one shown below would have to advance through a shower of lead. 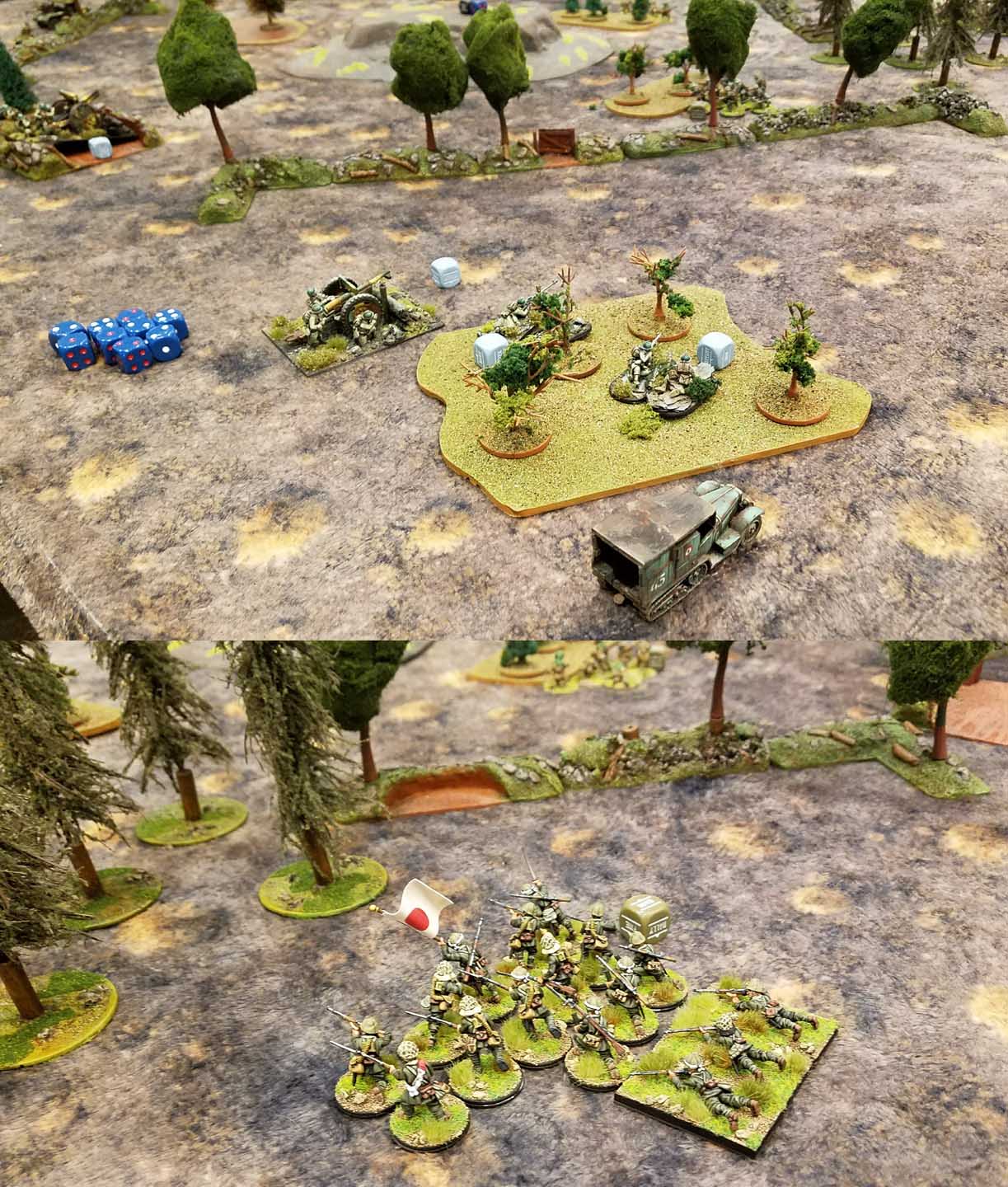 The Japanese infantry units chose to move through the center of this temple garden, using the walls and hills as cover.  Here the French heavy guns would not be able to target them, and would be upon the gunners soon enough! 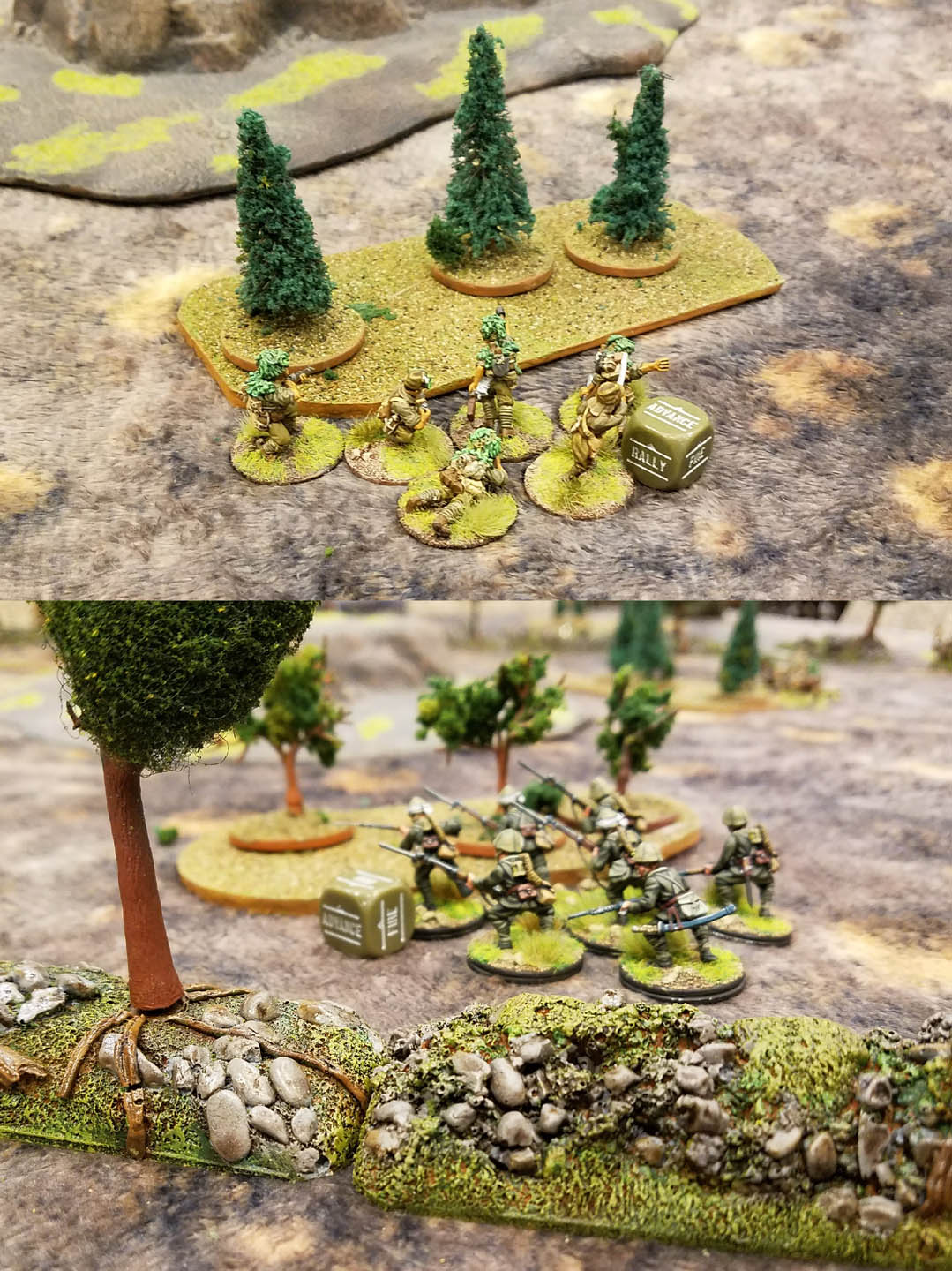 The most intense action took place on the left flank, as the lone veteran French unit leapt out of its transport to gun down a few small Japanese units.  They were not quite used to the tropical sun, however, and most of their shots missed.

In response, the IJA brought on their lone mechanized unit, the Chi-Ha tank.  Thus began a comical exchange of missed shots at point blank range, as the Panhard armored car joined the fray.

Eventually the tank would be destroyed by the WTC 15 Laffly tank hunter, not the Panhard.  The few Veteran French that had survived the close up machine gun work of the Chi-Ha would eventually succumb to an air strike. 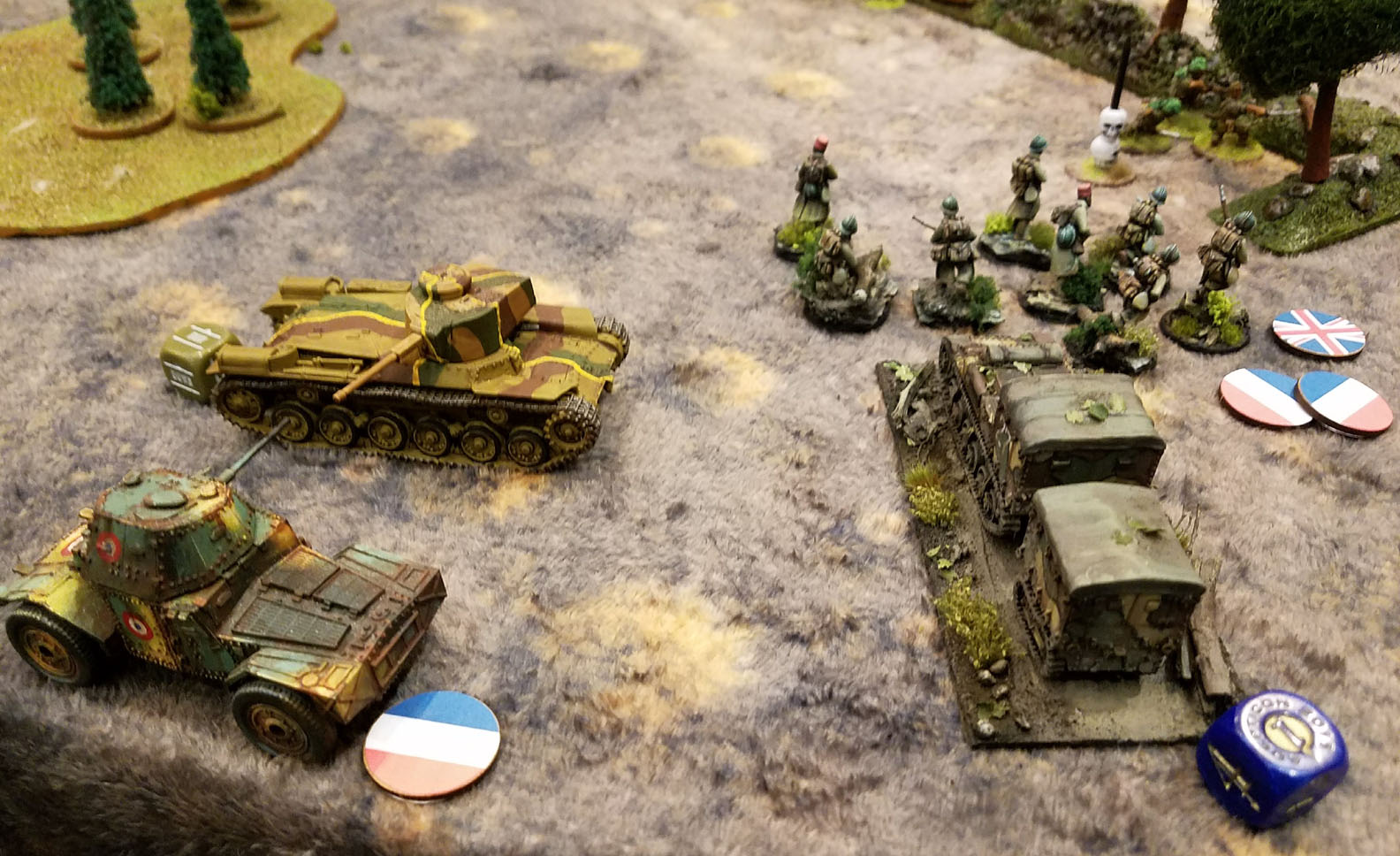 The French had total control of the right flank, with both transports and their passengers pouring fire into the massed Japanese foot soldiers. 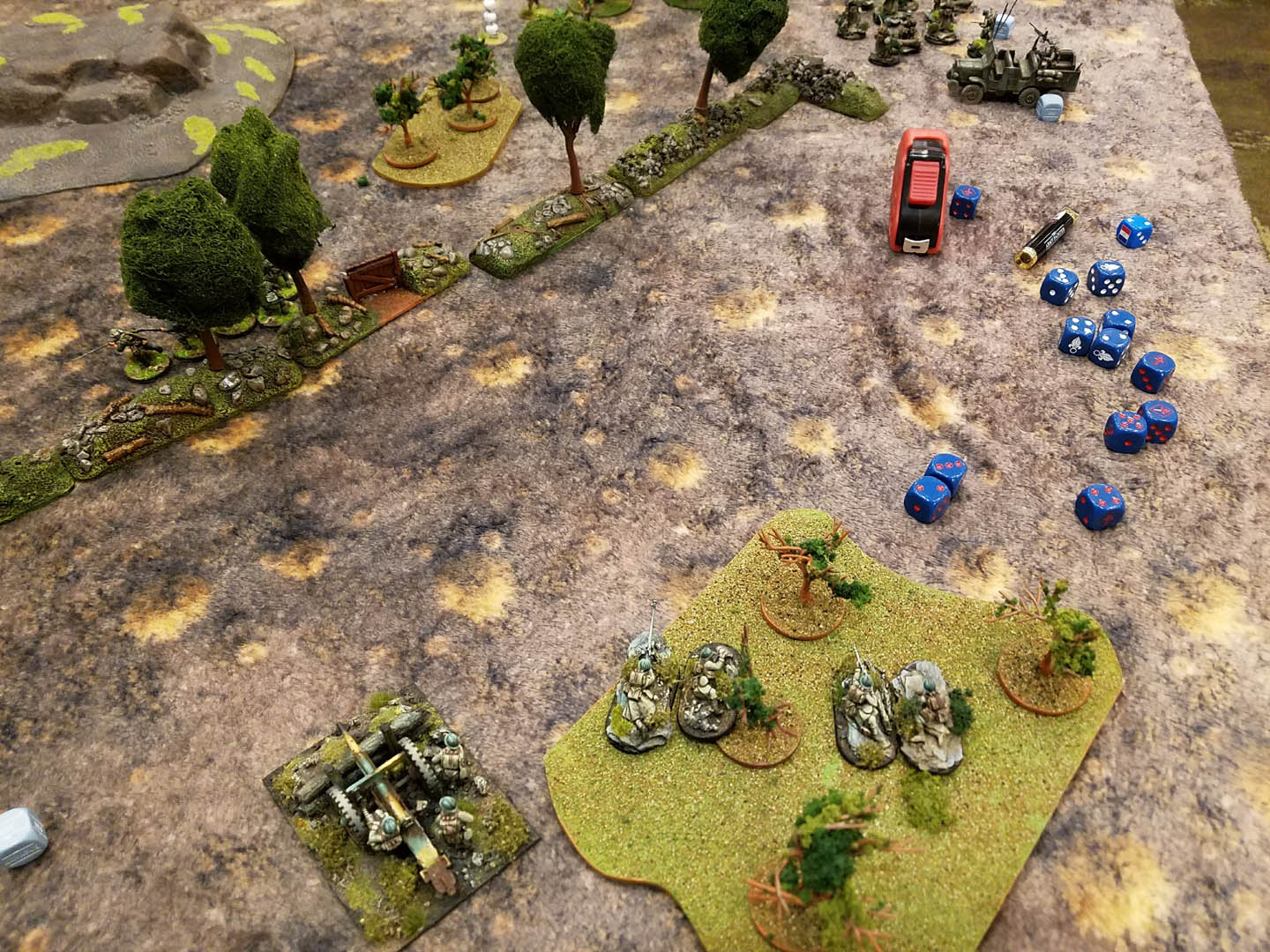 The gunners of the medium howitzer were shocked to see a nearby Japanese unit sneaking towards them.  As the battle drew to a close, would the Banzai charge have the range to reach them?  Apparently there was just enough to make it in contact, but the heat may have gotten to the crazed enemy soldiers, as it took 3 very nerve wracking rounds of combat to eliminate the brave gun crew!

Clearly they did not want to yield their precious heavy guns this day. 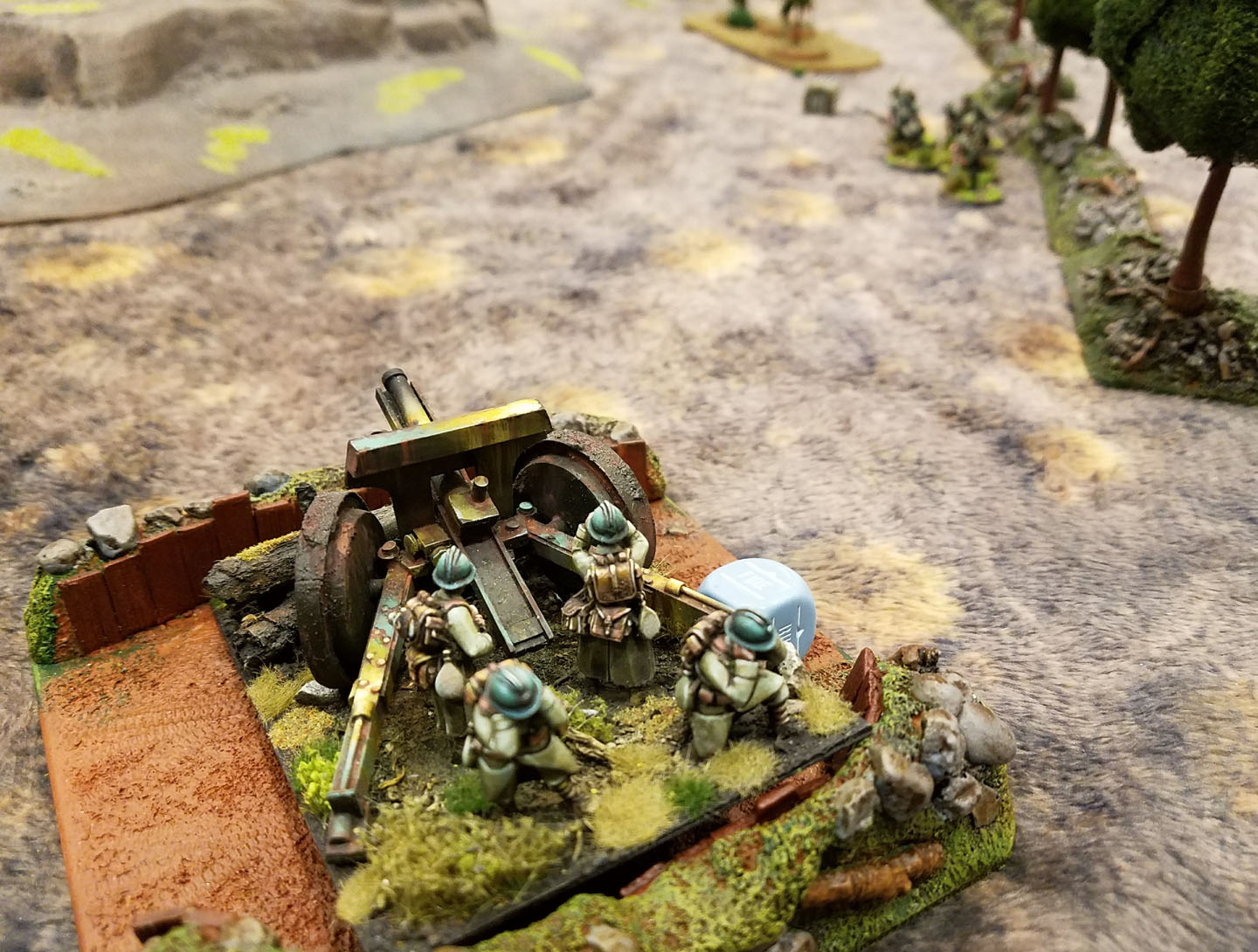 As before, the remaining Japanese units continued to advance through the garden to avoid the massed French units on the right flank. 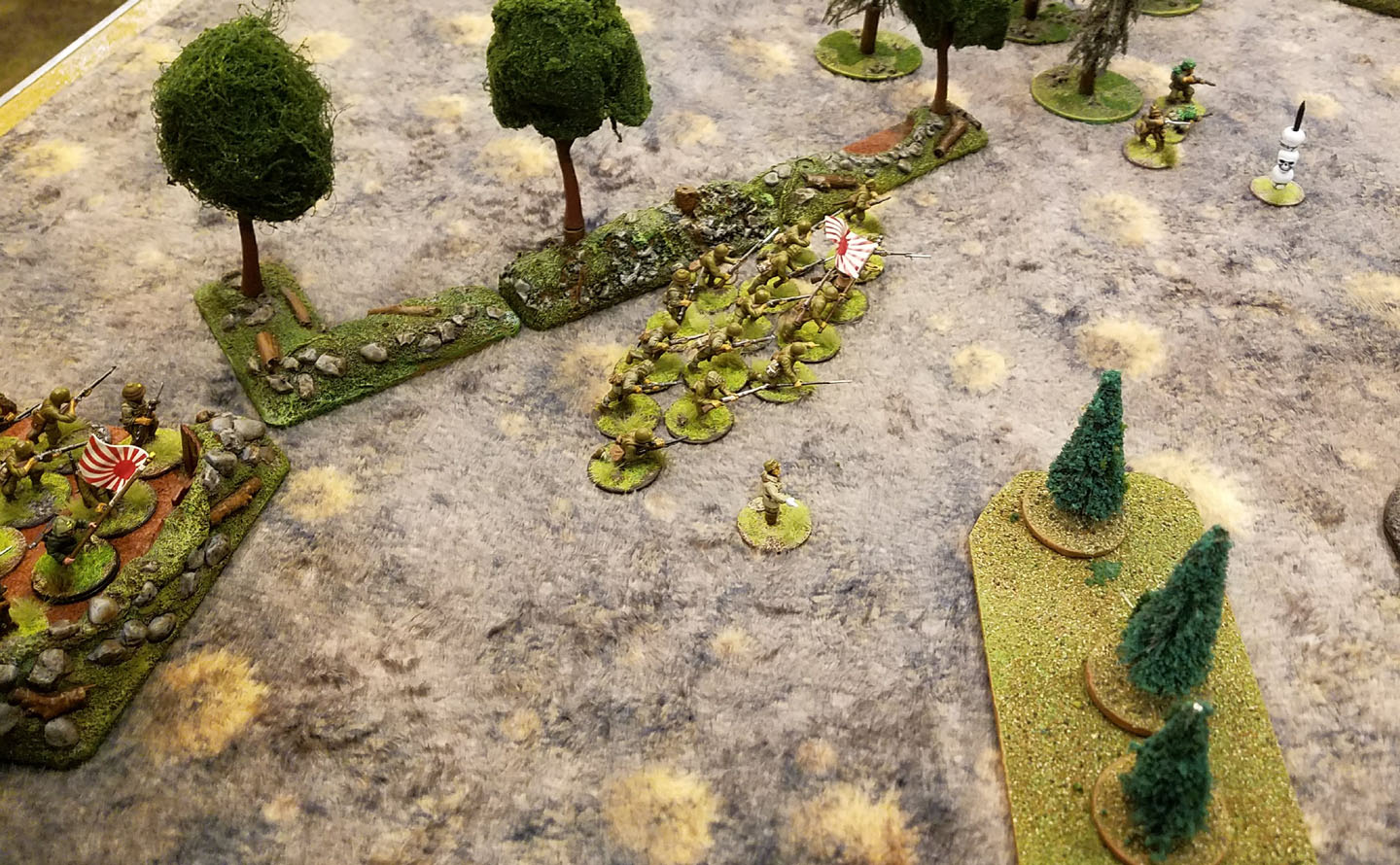 In an attempt to display their own honor in combat, the French infantry squad pushed the attack on the right as the game drew to a close.  Once more, they were just in range of another desperate Banzai charge, and a few rounds of savage combat ensued!

This last round would take victory away from the French, turning the battle into a draw.  Both sides would live on to fight again, as they each claimed overall honors for the tournament.

As I had hoped, Bolt Action turned out to be the ideal game for me.  I know what everything is just by looking at the table, with no need for memorizing endless army books and rule books.  Guns are guns, trucks are truck, and so on.  It is what you do with them that makes all the difference.

The battle of wits over reserves is very fun, as you try and make your opponent commit his forces as early as possible.  This is a challenge due to the order dice mechanic, so you have to think on your feet!

Many thanks to Jon for putting on this event, and for hosting me in the Warlord booth the following day for painting demos.  Next year the event will be much bigger, as the Chicago crowd is now aware of the tournament. 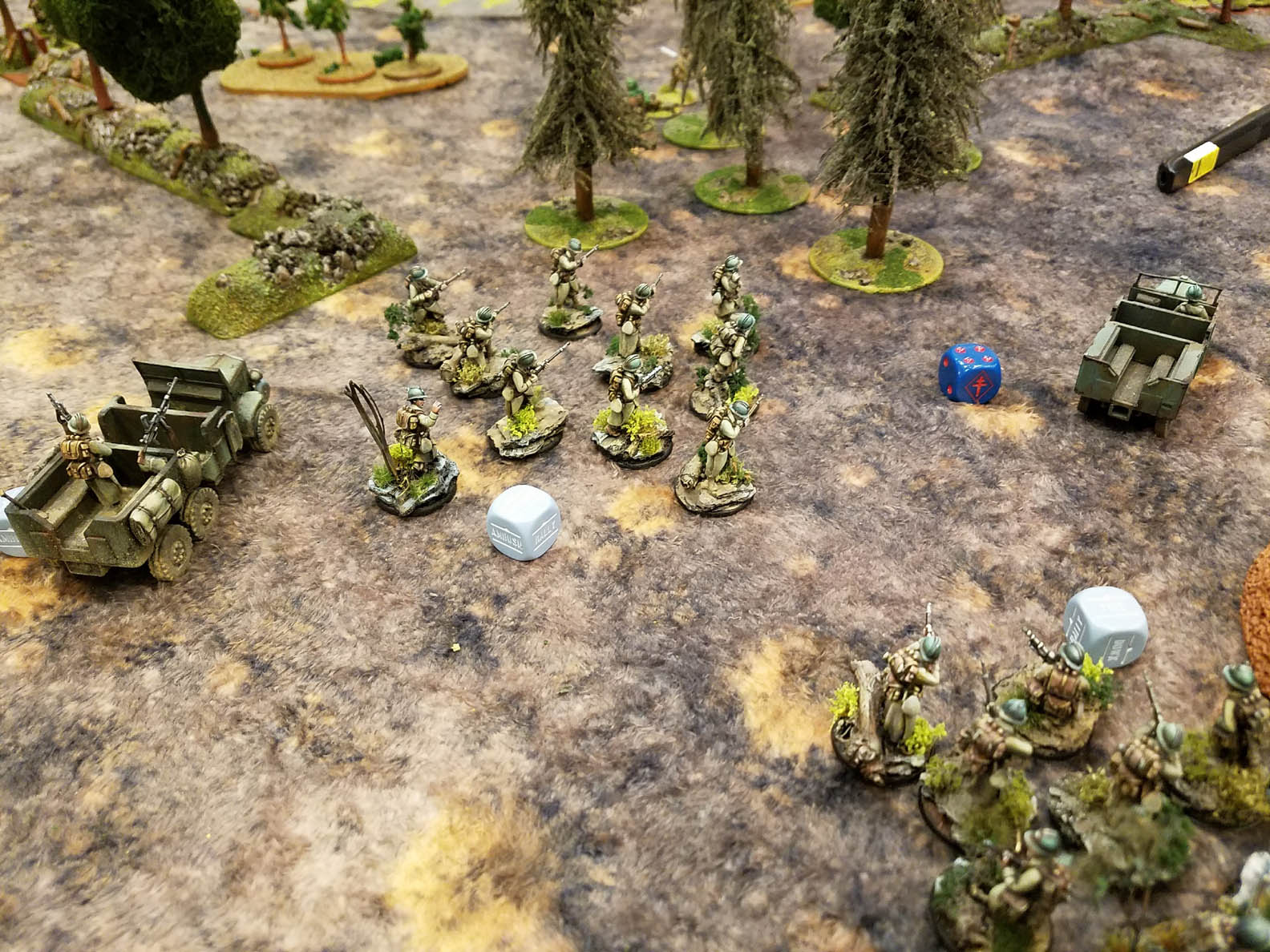