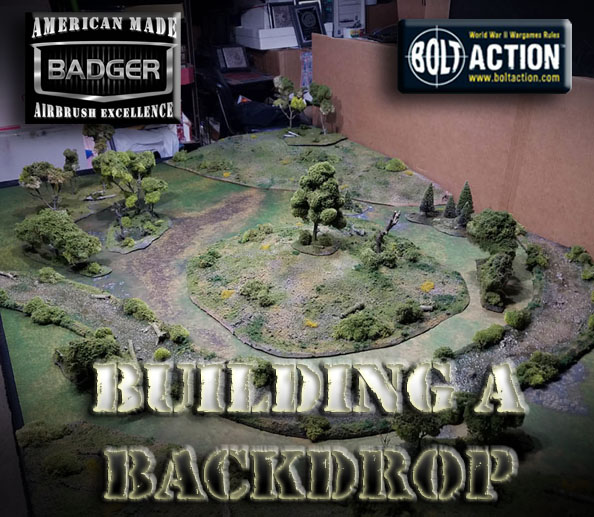 This unusual project is something that I have wanted to do for many years, a backdrop for my terrain board!

I cannot recall how many times watching or looking at battle reports the inevitable piles of junk or other distracting things would show up behind beautiful tables of terrain and painted minis.  I had grown tired of spending hours in photoshop blacking out these messes :-)

There are many different ways to go about this, but I also had some restrictions on what I could do.  I had already tried some cloth backdrops, but they didn't work out very well.  The photo backdrop I had purchased was not a very good color, and I could never get the folds out of it or keep it from wrinkling.

My favorite material to use would have been the thin underlayment foam which I use for my terrain, but I need to save that for my terrain!

What I had available were a number of large pieces of cardboard, so I set about making something I could use from that simple material.

It all starts with the mat, which is from Table War.  Most of you have already seen the how to posts on building all of the hills, trees and the river. 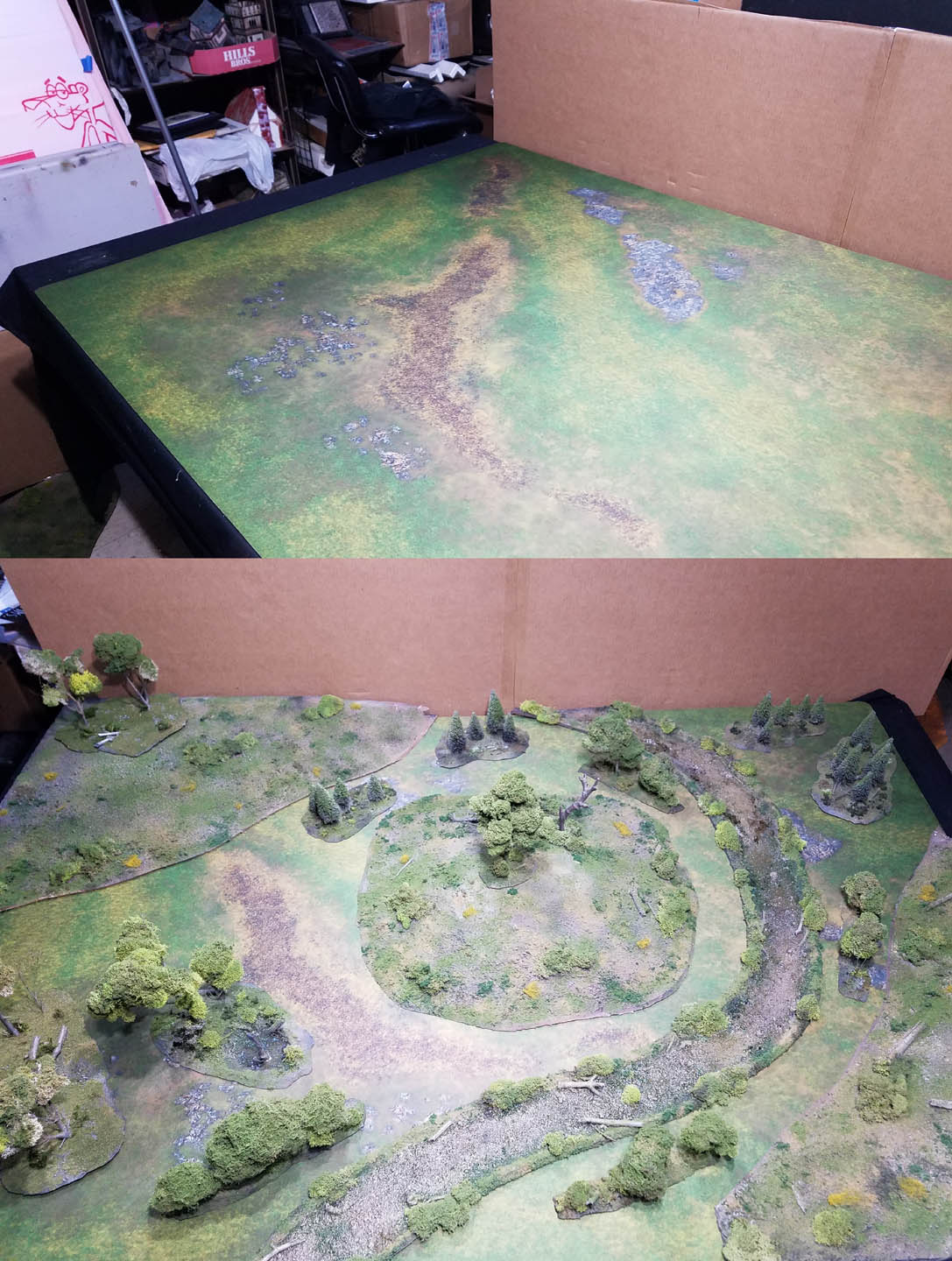 This view shows the issue. any time I wanted to take a picture (or film video) from one end of the table or the other, I was going to have a very unsightly view.  Unlike the 'main' backdrop section, there was nothing behind it to support a big piece of cardboard.

The lower image shows how I made supports for the side wall section by making a few vertical ribs.  Now I can take this single section and use it on either end of the board, moving it when I am taking pictures from either end. 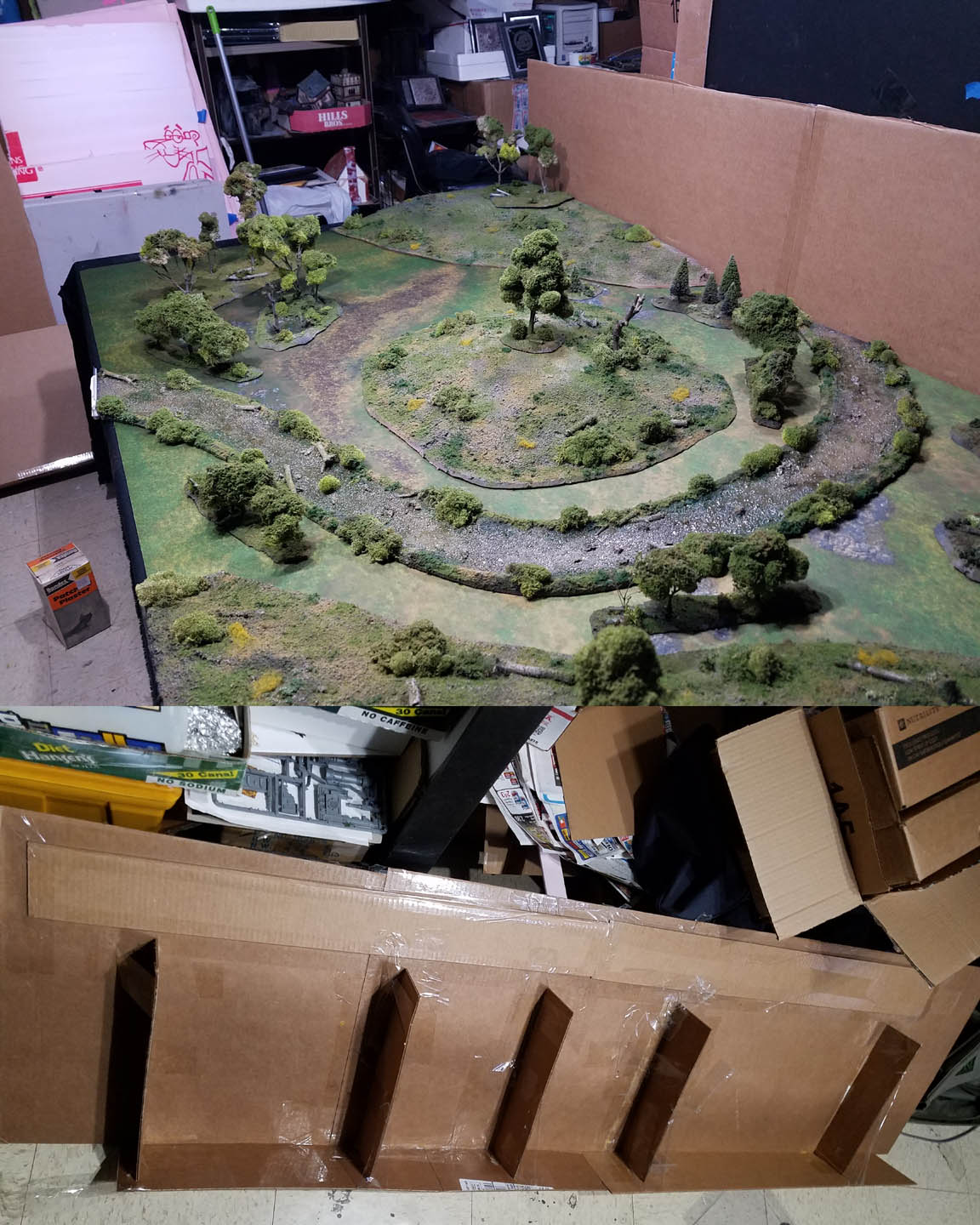 Since I will always have some kind of corner terrain, that will help to keep the boards in place, as well as hide any joints. 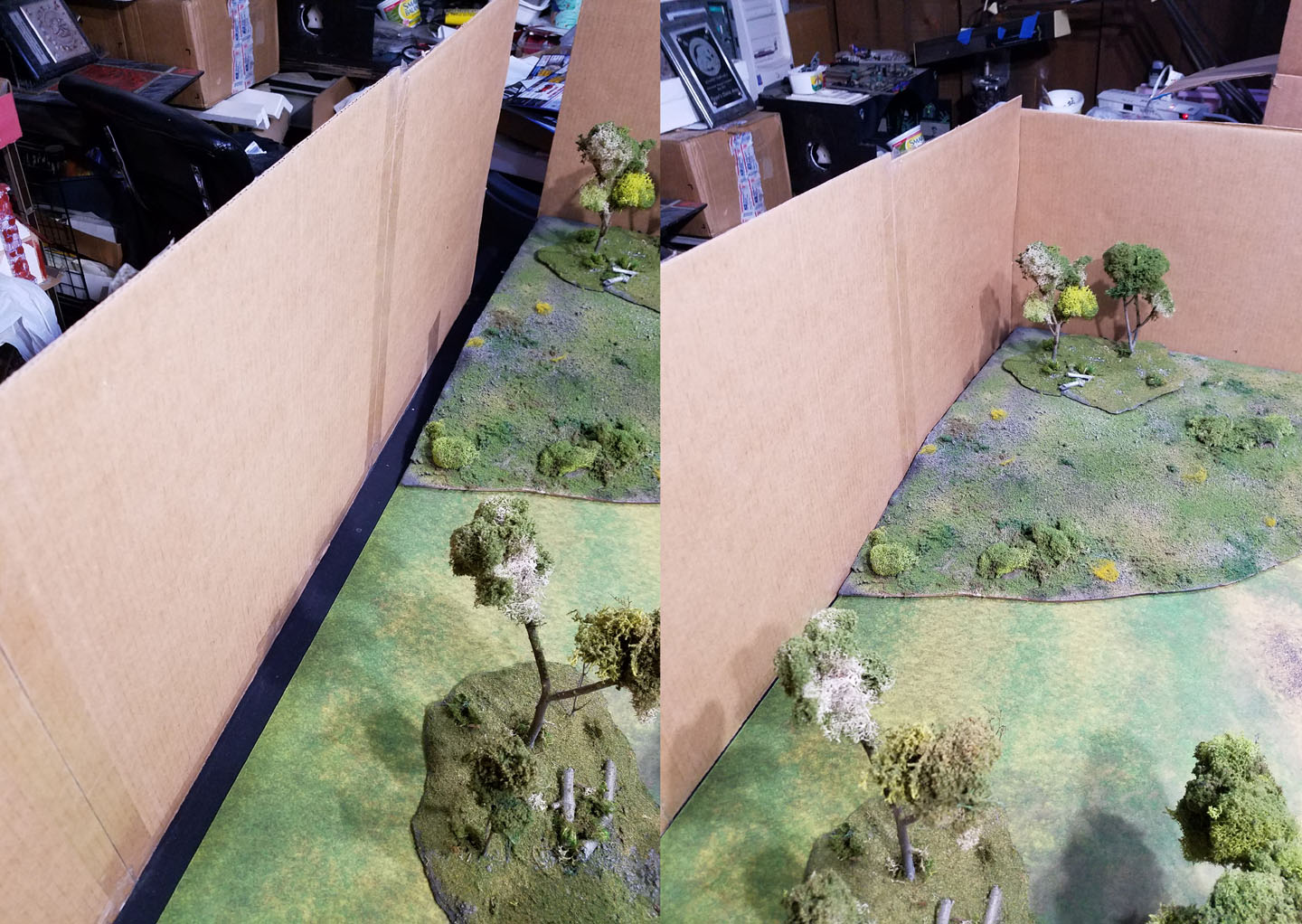 Even in this unpainted state, it is already an improvement!  I have spent many hours in the past trying to crop out or black out distracting objects behind my terrain boards in battle reports.  Why go to all the trouble of painting minis, making terrain and having the battle mats when piles of whatever will be seen in the background... 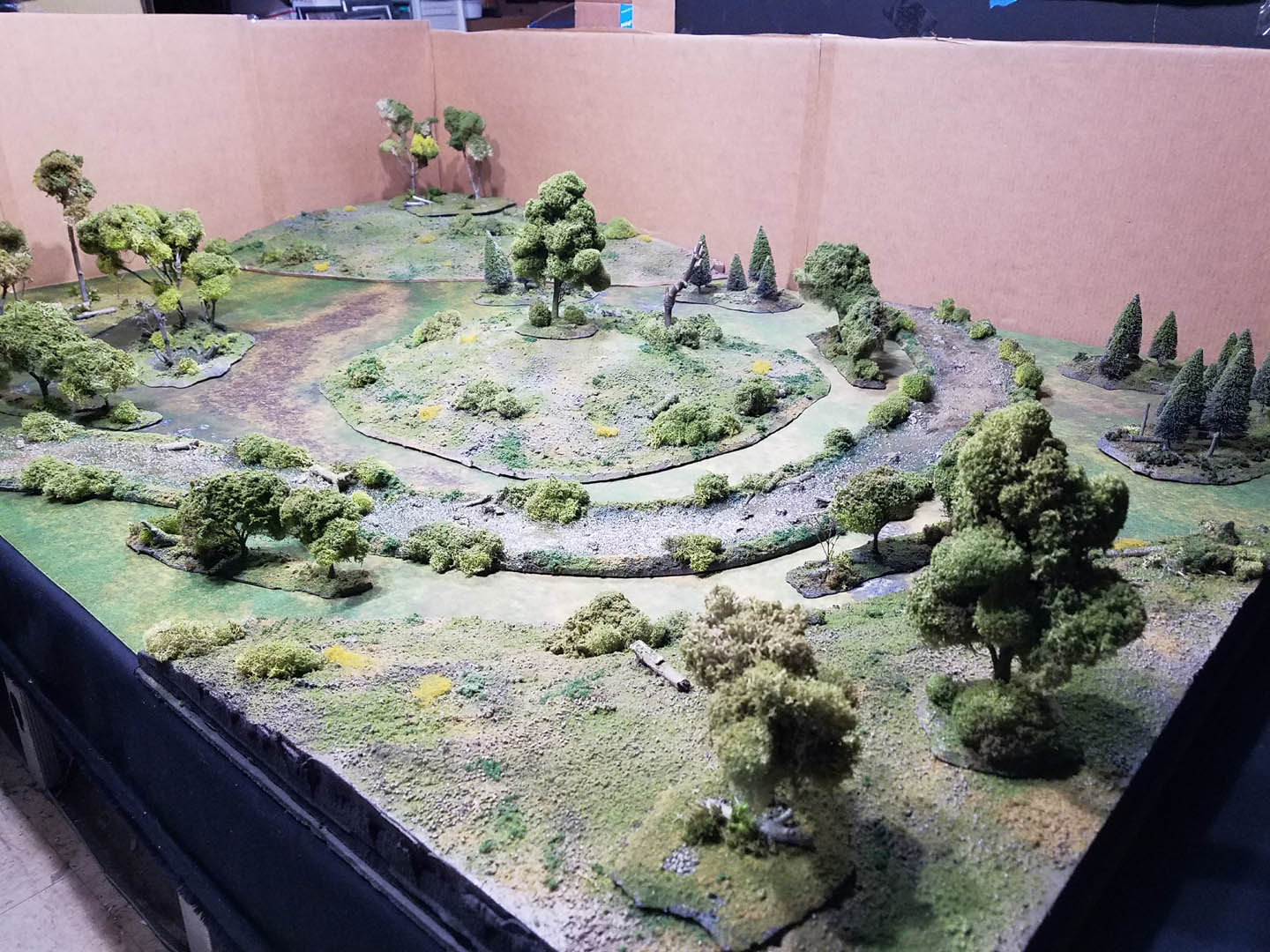 I was able to get the camera angles pulled back a lot more without having to worry about what would be in that background.  I can crop out most of it, etc, or more easily photoshop some more.  The only option I used to have was to black everything out. 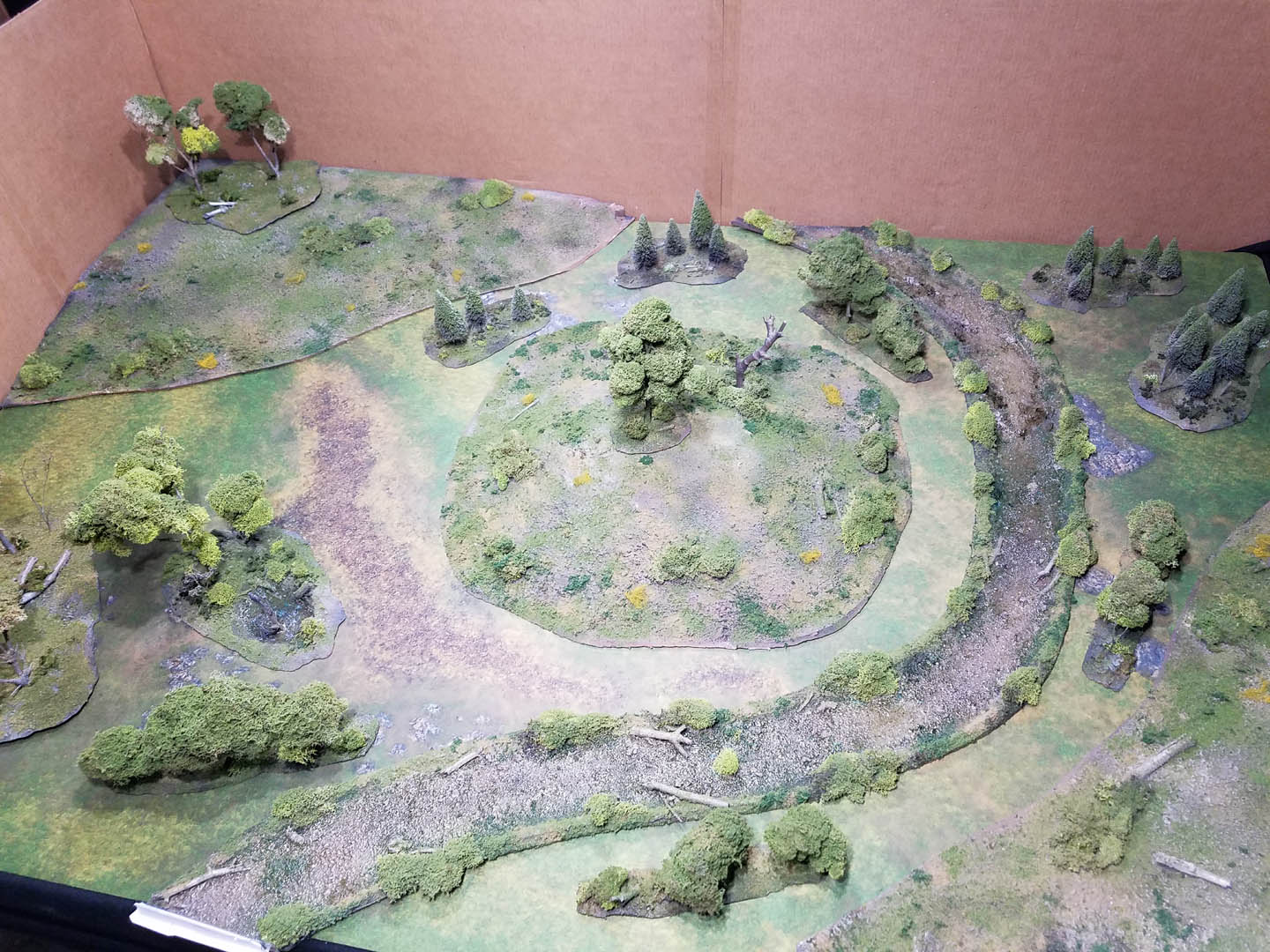 I was especially eager to see these ground level views!  Without a backdrop, this angle was almost certain to show piles of art supplies lurking behind the board. 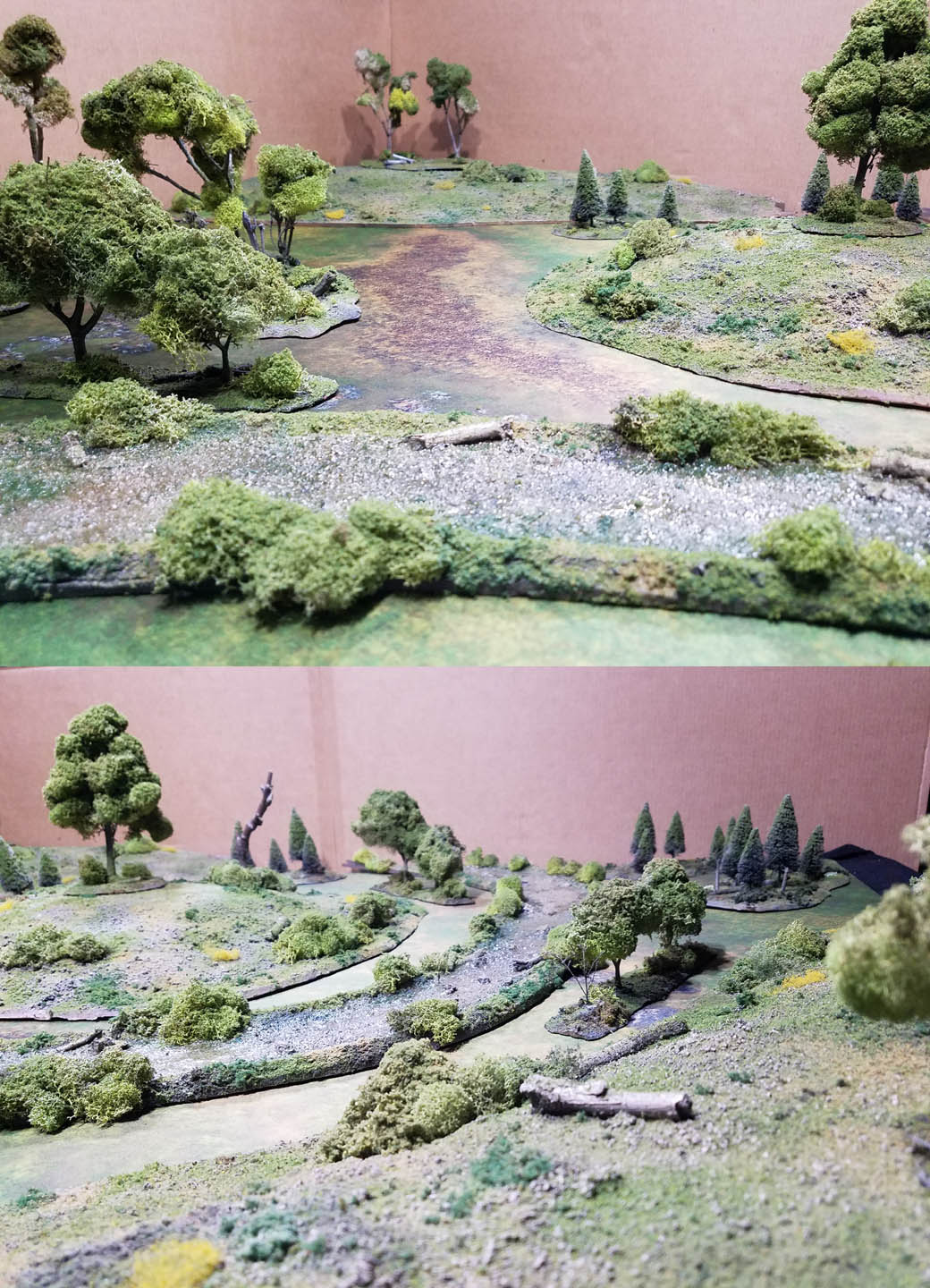 I switched the board to the other end of the table to see what that would look like.  Since I took these images, I have since made some more simple corner and straight wall elements to better make this blend in. 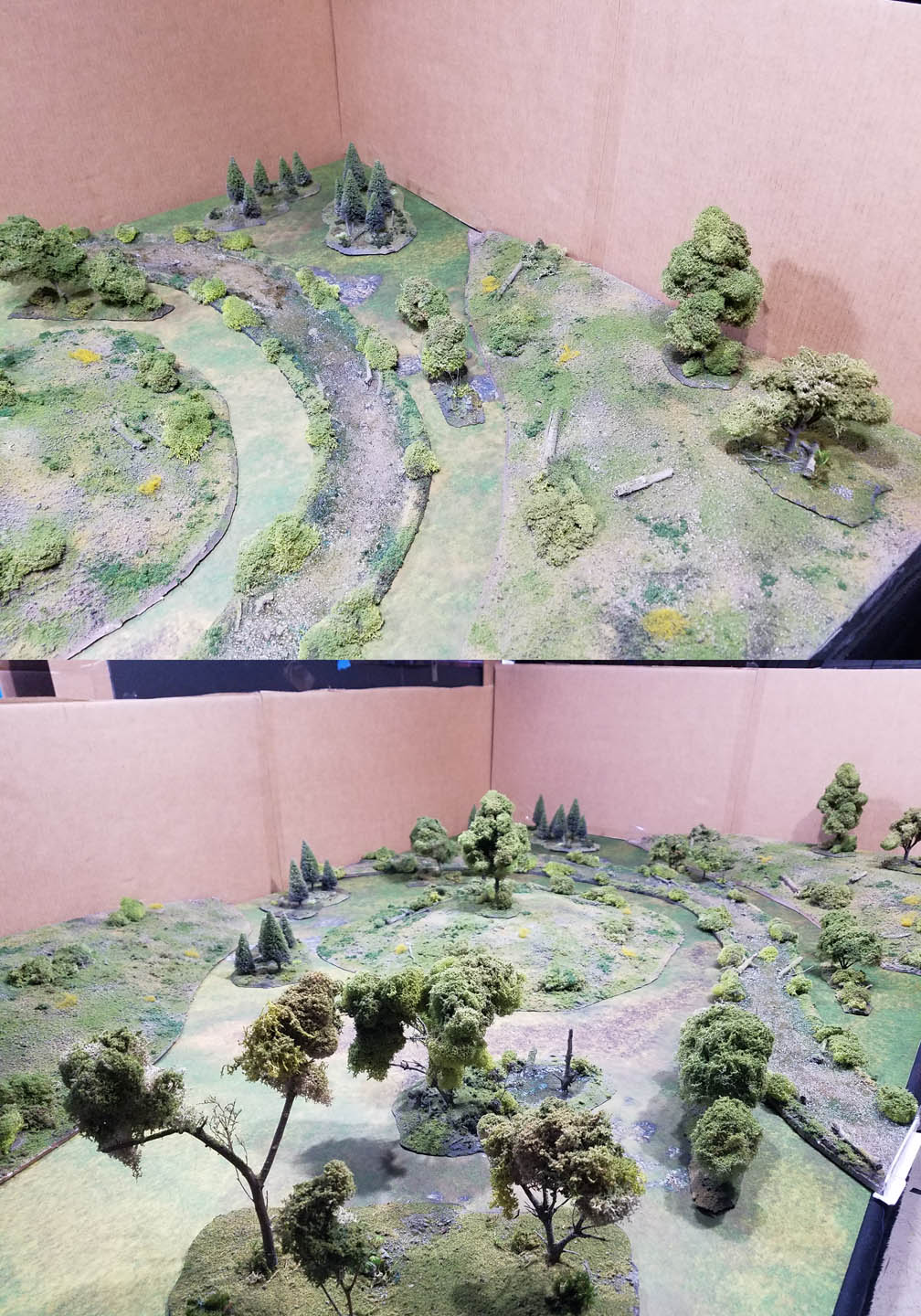 Time to paint this!  However, this phase will be tricky, given the use of cardboard for material.  If I had used the pink foam, I could have used a brush. and any kind of paint that I needed.

Doing so with cardboard would have guaranteed that it would warp with all that moisture, so I tried to prevent that. I had a can of regular spray primer, and used what remained to at least get a coating on the cardboard.

Using an airbrush to paint it (a Badger Patriot 105) would cut down on this moisture drastically... and it would also save a TON of time.  In addition, it would give me the soft, misty look required to create an immediate sense of depth. 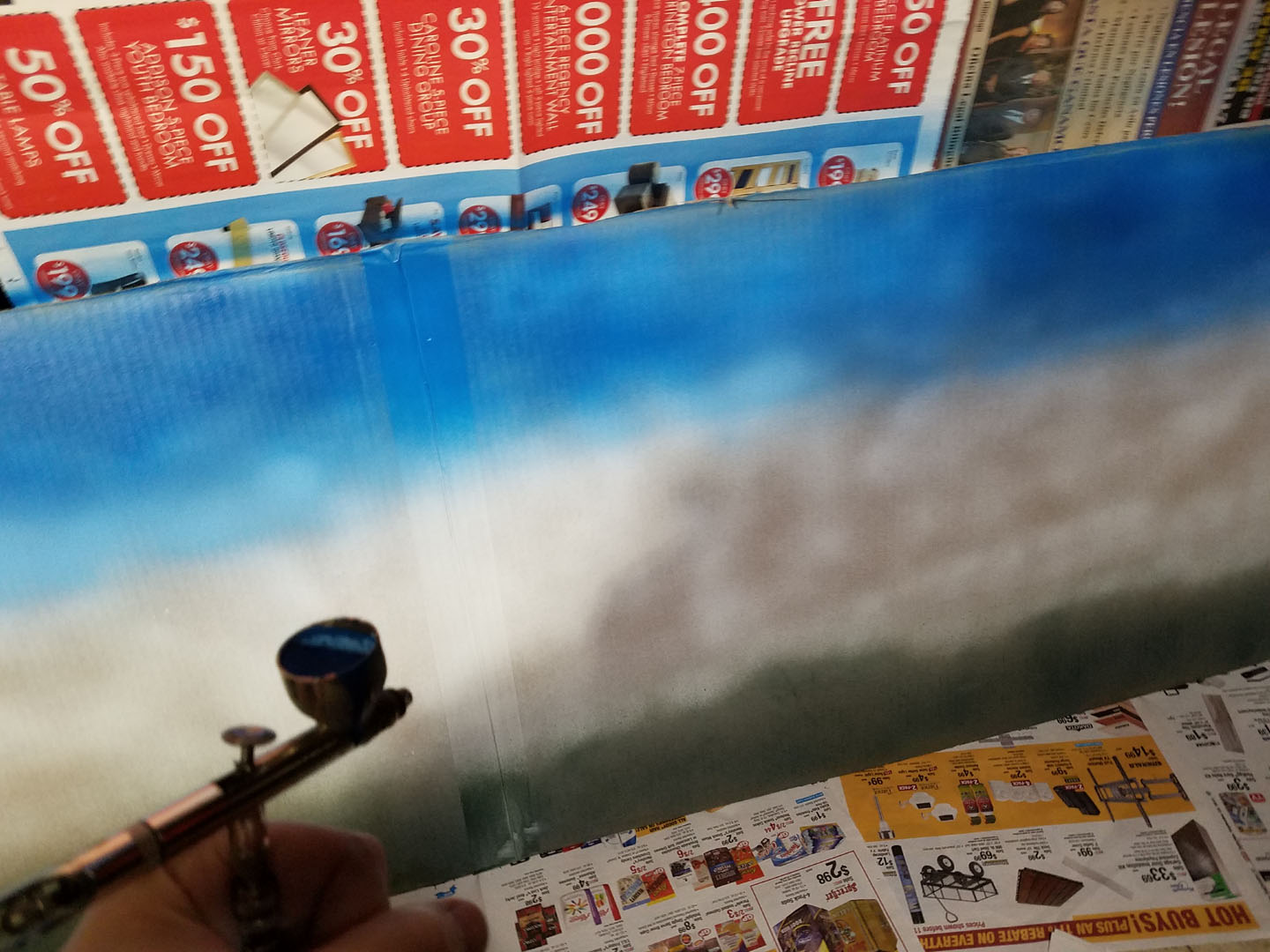 After working a number of sky colors onto the board, including the Stynlrez slate blue, etc., I used some of the "landscape paints" that are also made by Badger.  These were originally intended for model train builders, so it would be perfect for this task.

You can see how soft the horizon line is.  This is essential, especially if I am taking any images of figures close to the backdrop.  It must immediately sink into the distance.

The primers and paints from badger are now at a new website.  If you use the discount code wappellious, it will definitely save you some cash : 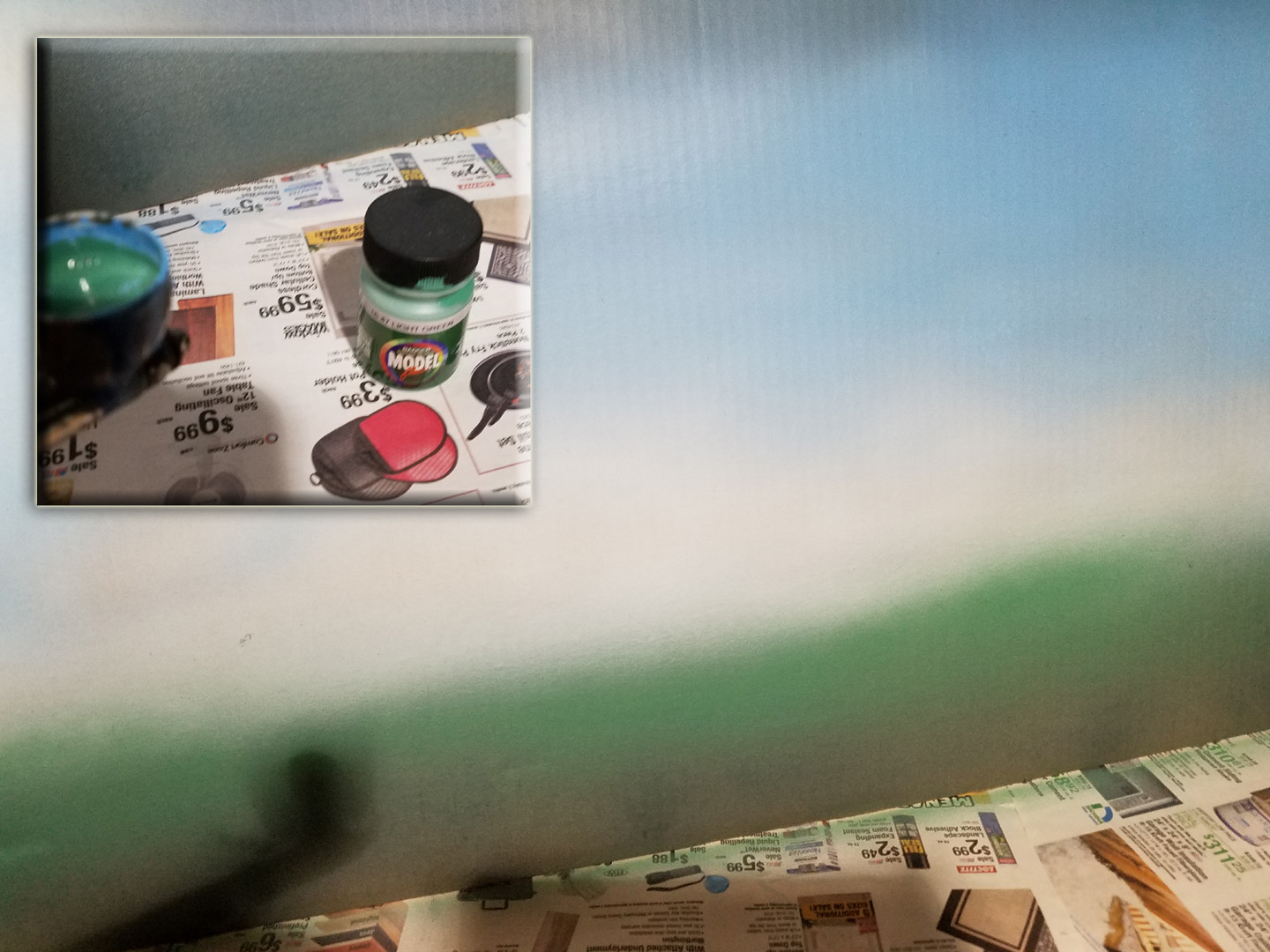 To create a few tree lines that mimicked my terrain board, I ripped out a few shapes from my newspaper to get some randomness.  I made sure to leave the lower section of each tree stand the original sky color, which would give me more of the misty feel. 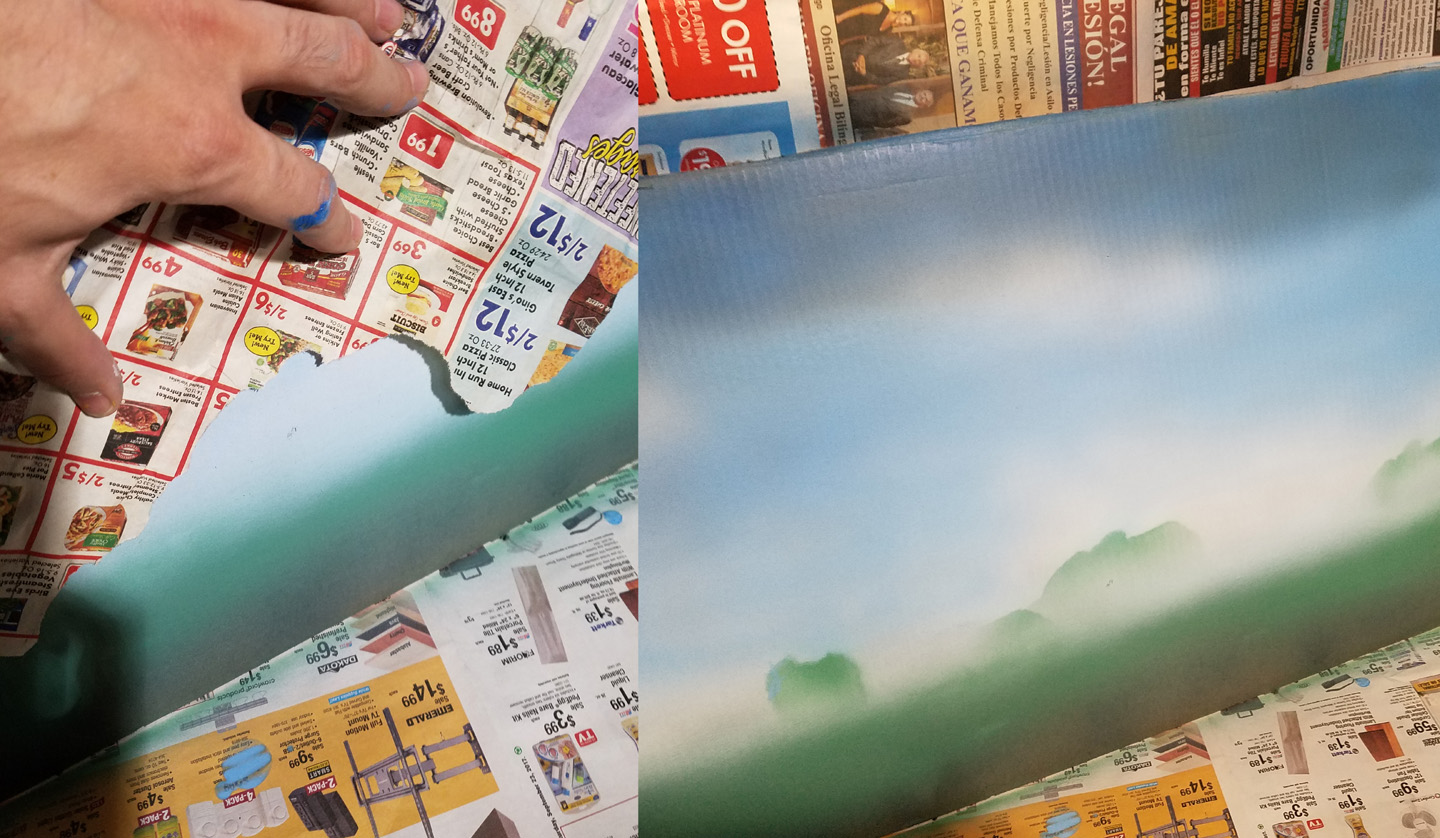 I constantly looked back at my terrain board to see just how I could get the same feel in the distance.  The ends of each board had to be as "generic" as possible, with no tree stands and the exact same horizon line.  Keep in mind that I have to match four different edges with just two pieces! 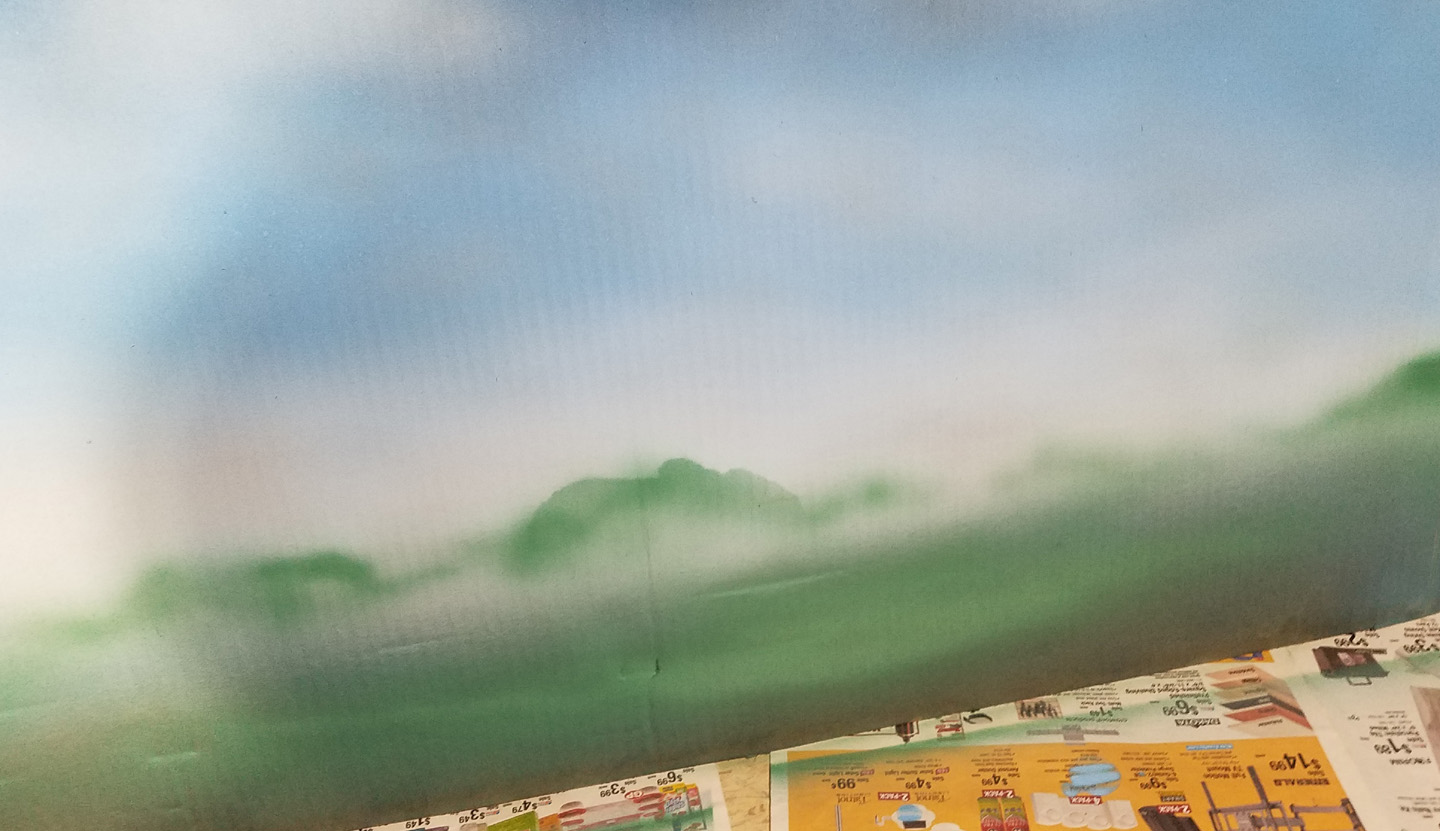 I mixed a deep green with the Ebony Stynlrez primer to get more definition in the tree lines, and get a 'layered' look to create more distance.  As I got closer to the front of the scene, I used some more warmer and more saturated colors to further push my orginal sky and tree line into the distance.

If I were simply painting a forest scene, I would more detailed elements in the foreground, but that cannot be done here.  Since I want to move my terrain around, this scene has to be more like wallpaper, a soft pattern that is barely noticeable and repeats itself over and over. 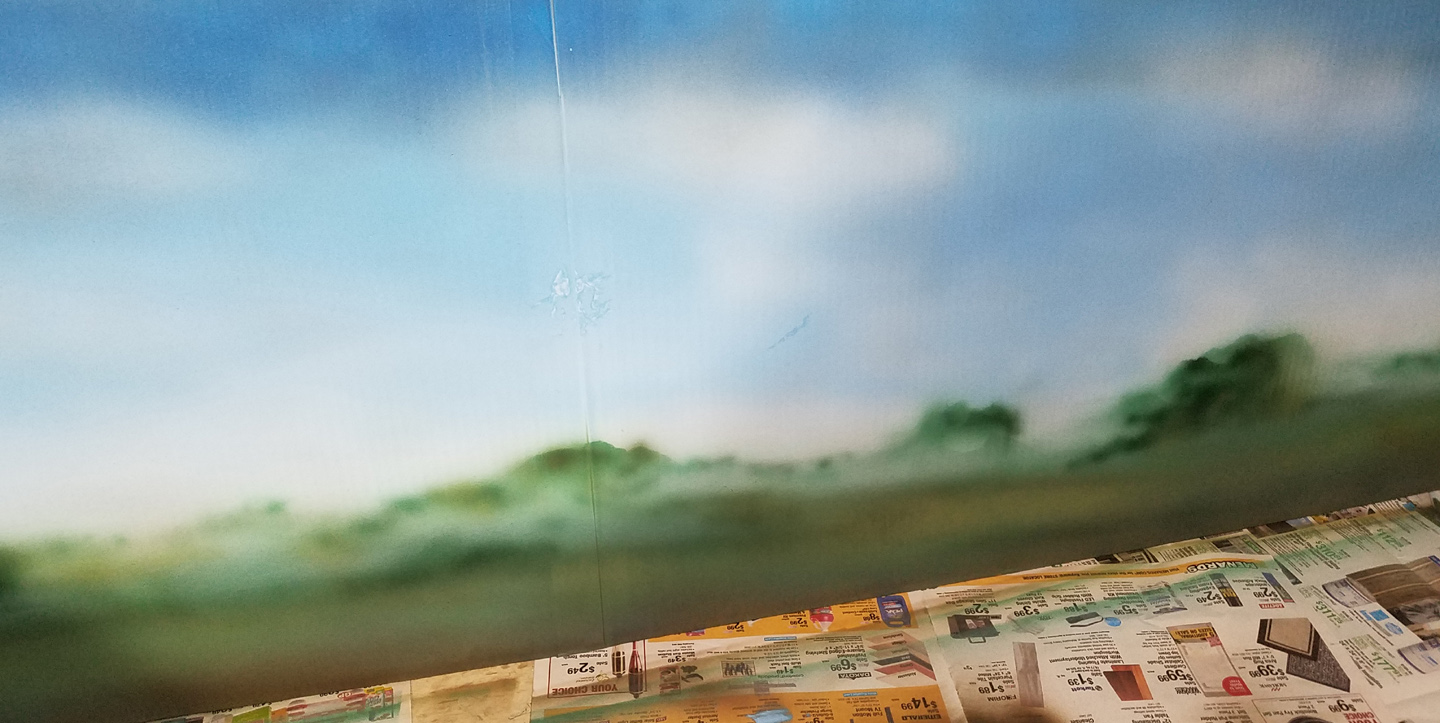 The larger section is done!  This gives you a sense of how big it is... around six and a half feet.

Uh oh, what is that lurking in the forests of France?  Beware the battlefield T-Rex.

In the next article, I will show how I painted the other section, and discuss a few methods for dealing with seams as well as matching the colors of the battle mat.

If you want to see more unusual articles like this, it would be very helpful if you could support the patreon page.  This will allow me to have a few free moments to tackle projects such as these with all the engineering involved! 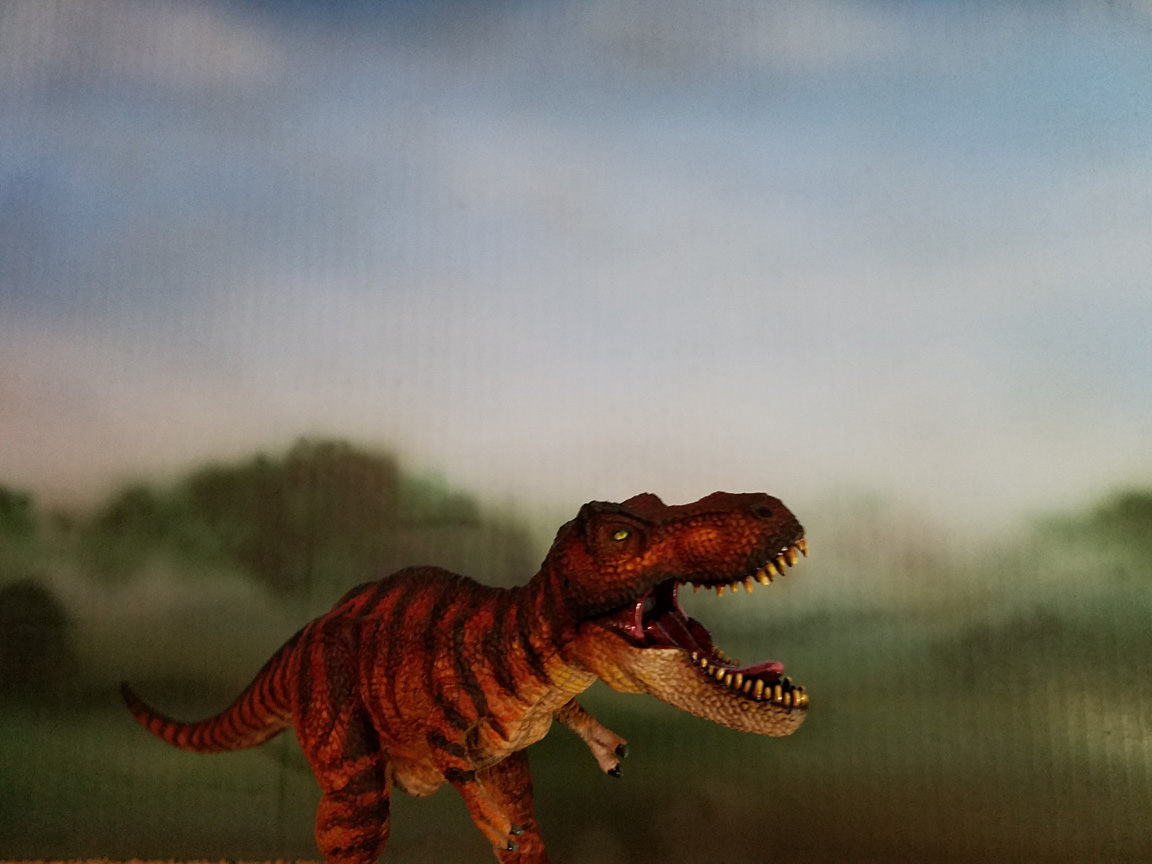