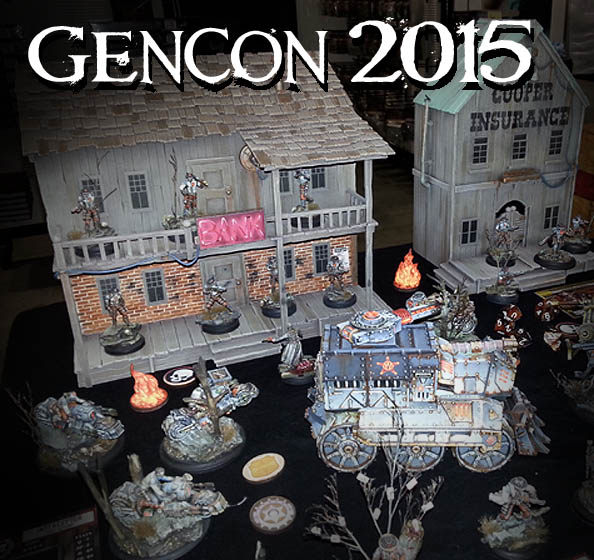 My second GenCon has come and gone.  It was a long week following just 15 days to prepare!

Based off my experiences from 2014, I made some adjustments.  In the end, that all seemed to work out well.  I was also fortunate that a huge number of friends would be there as well.

It began with a new experience for me, and that was getting into the Ram to see all the Privateer Press setup, including the themed menus! 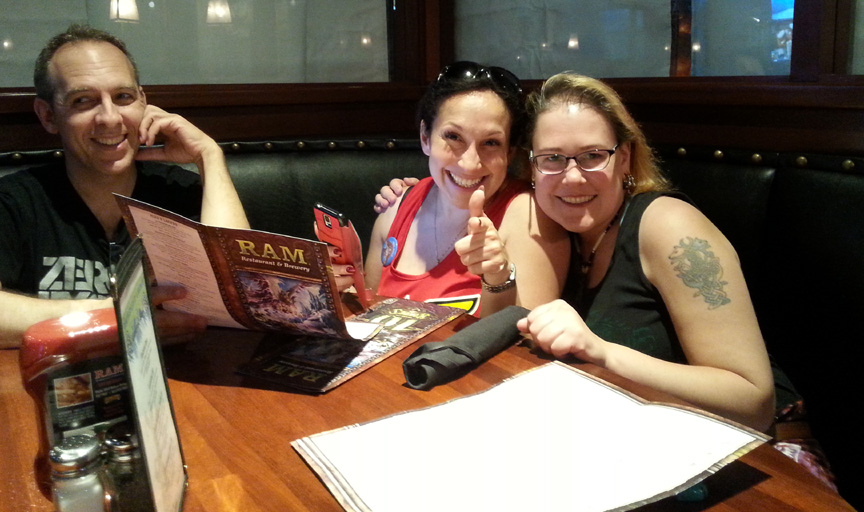 An interesting moonlight night.  The moon was out every night, which were very warm compared to last year, where high winds and temps in the low 50's had us shivering. 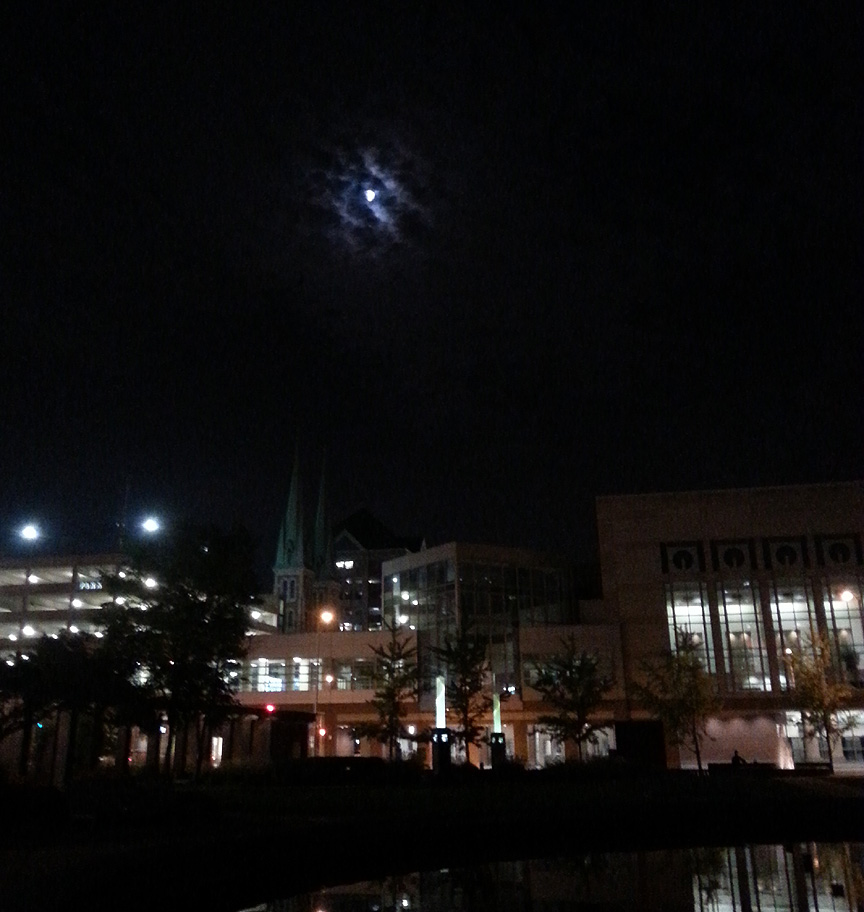 Trying to bring a little bit of Wappelville to the hotel. 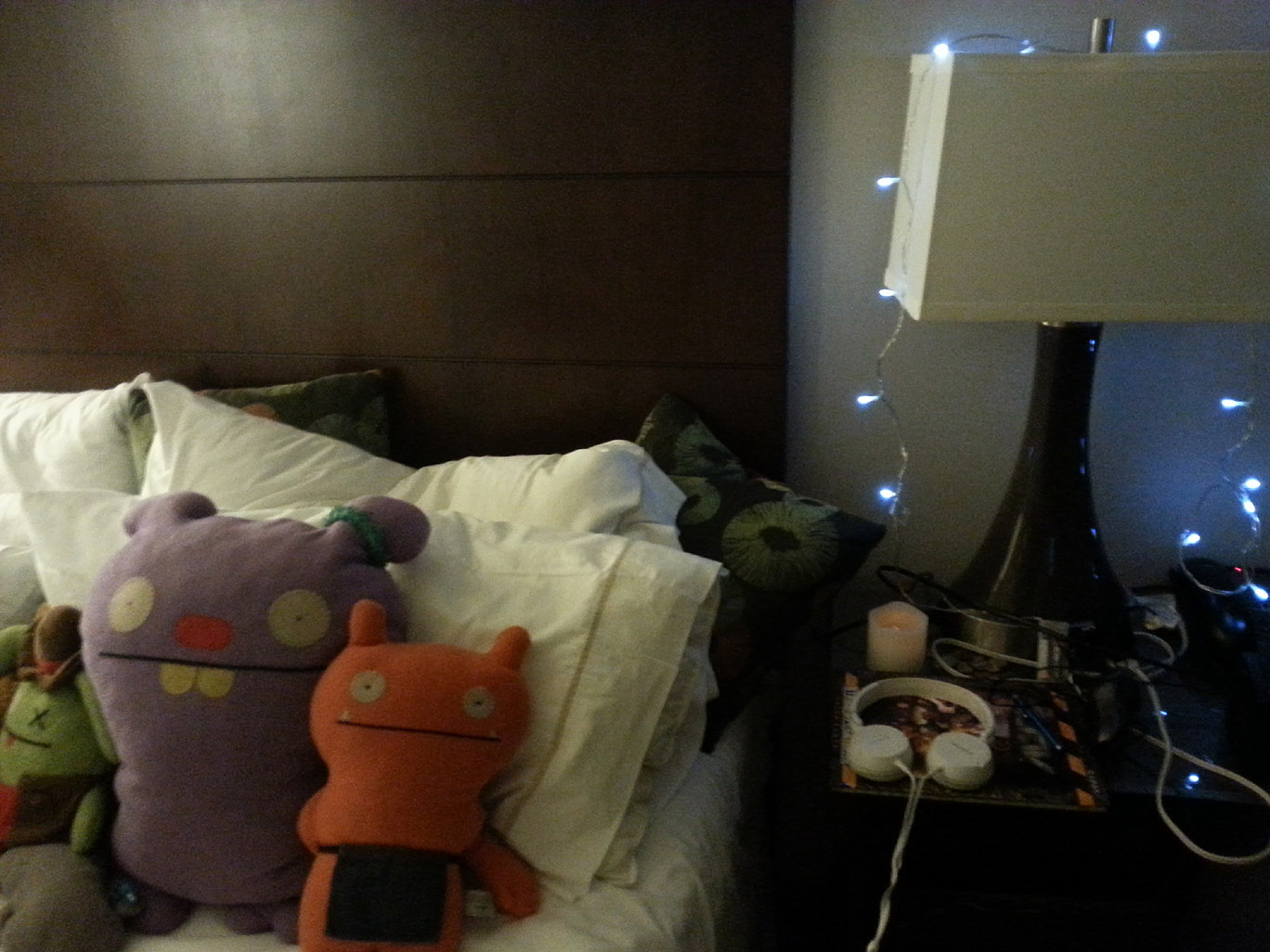 Tuesday and Wednesday were sweltering days inside the dealers room for setup.  The doors were open, but the air conditioning was turned off.  Needless to say, it was stifling in there by day two!! 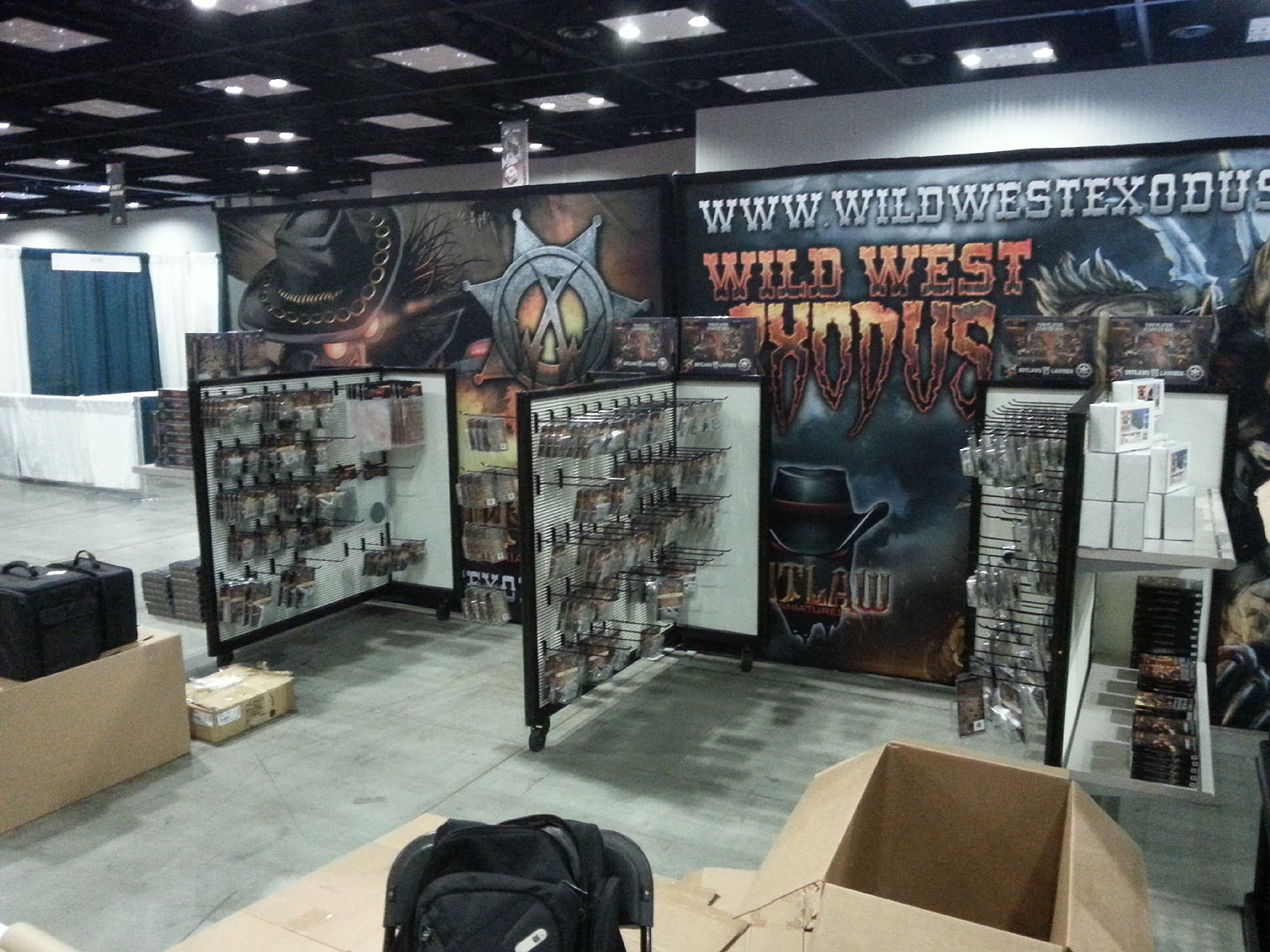 This is me trying to figure out how best to set up the table.  Aside from leaving myself a space for painting, I did want to have each of my Posses out there for people to check out.  I felt that having the cards next to the figures was essential. 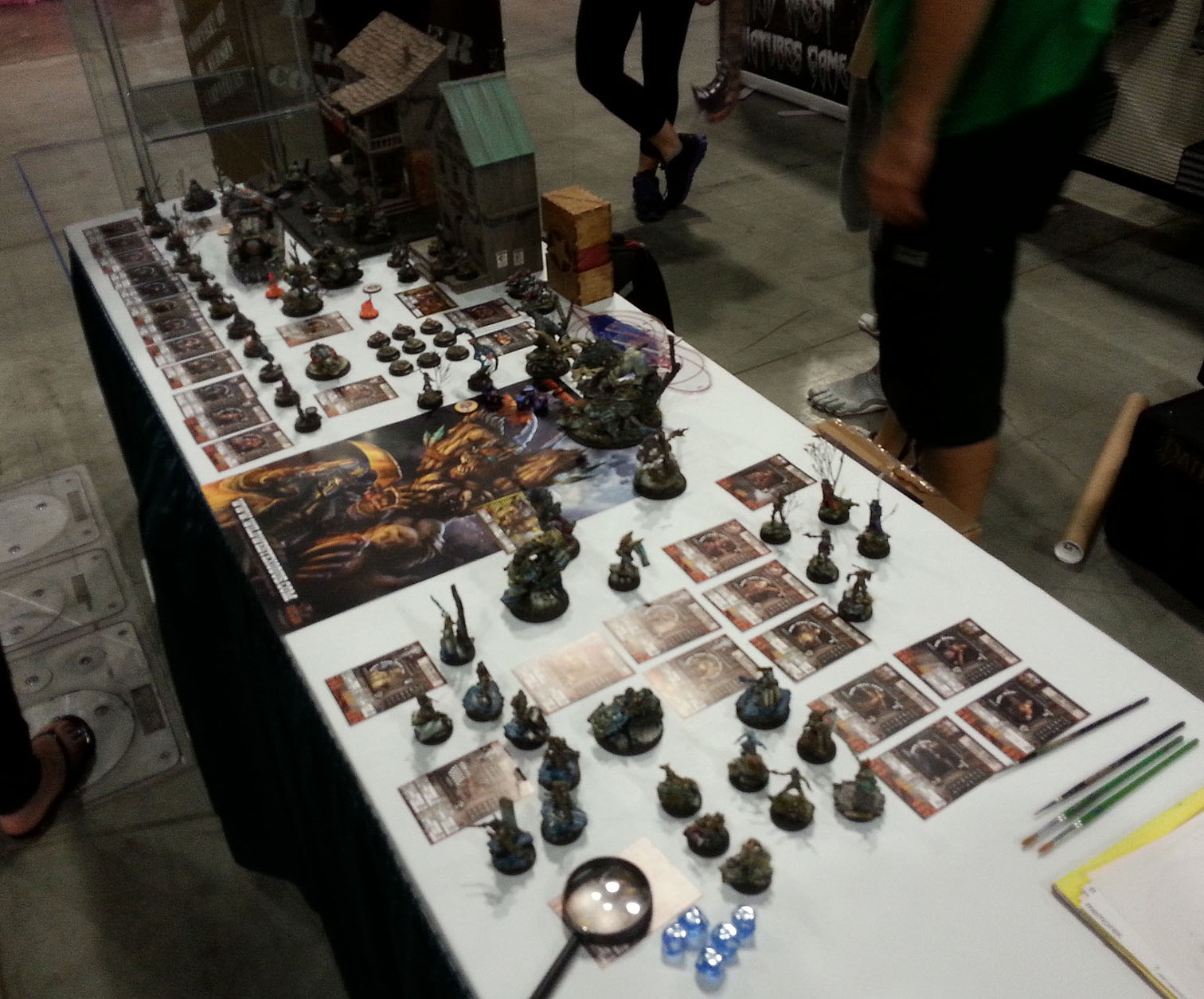 And there you see the painting area.  It was not completely intentional, but traffic flow proved very quickly that I had chosen the correct side of the table to place the Figure Forest!!

Its location tended to draw people in approaching from that corner, and they could follow along with the goodies on the rest of the table. 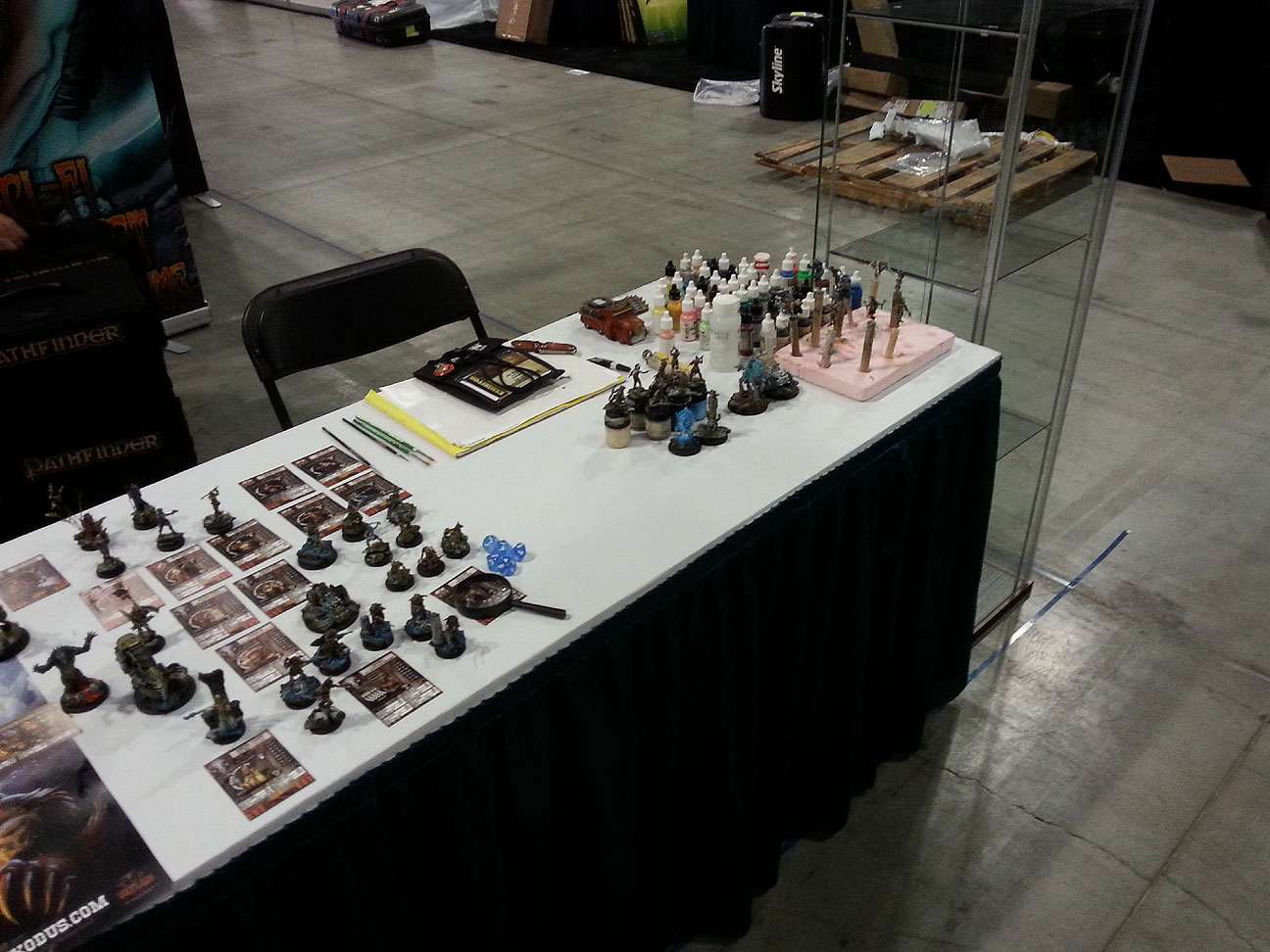 The crew members of every booth were going to lose a few pounds just standing in the Heater Dome. 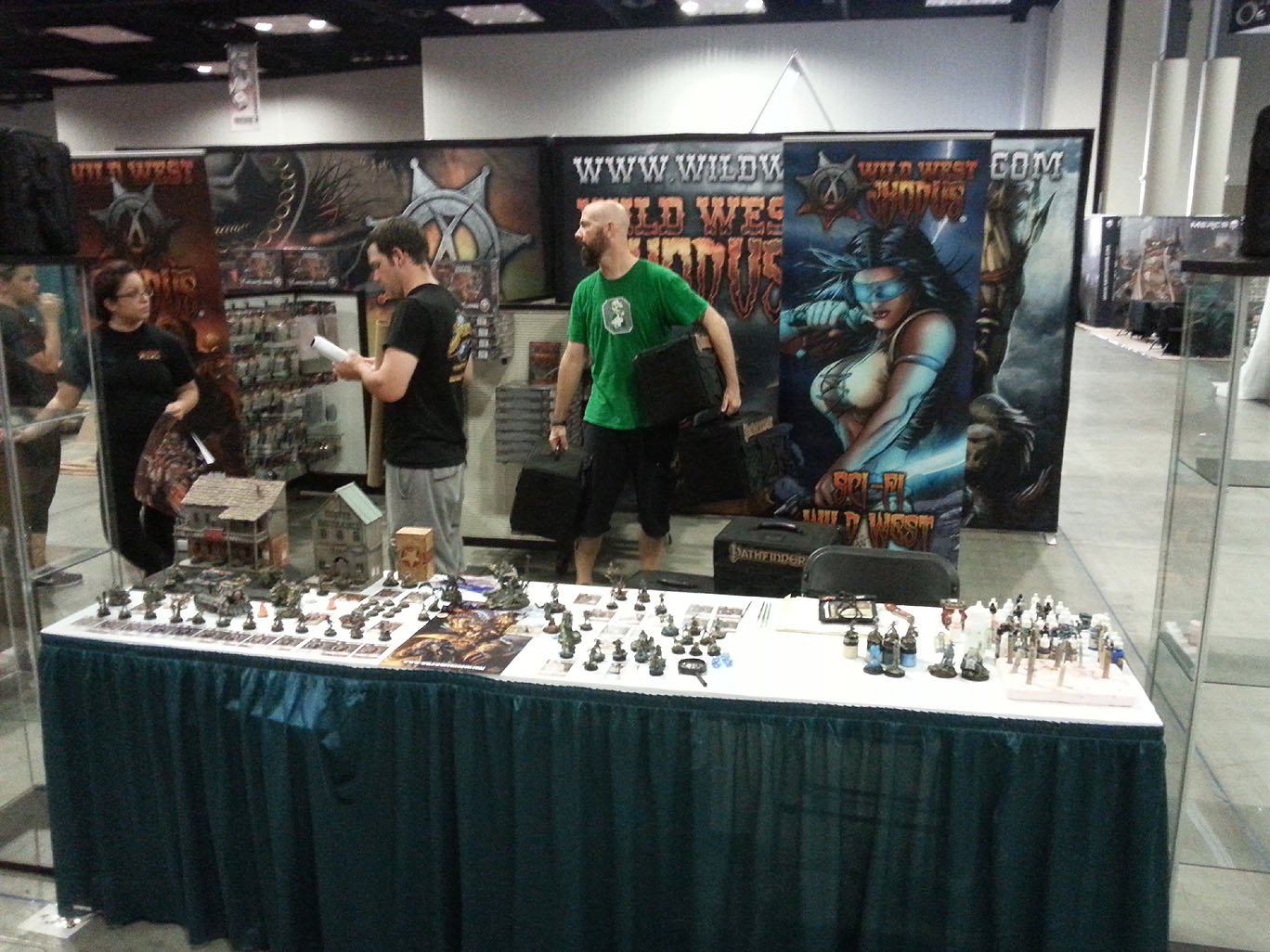 At the last minute, I thought I would pack one of my smaller black display cloths.  This became a very nice backdrop for the Lawmen, Outlaws and Union figures on display.

I attempted to place the figures in such a way that folks could get an impression of what they might do in a real game, as opposed to a simple pose in front of a structure. 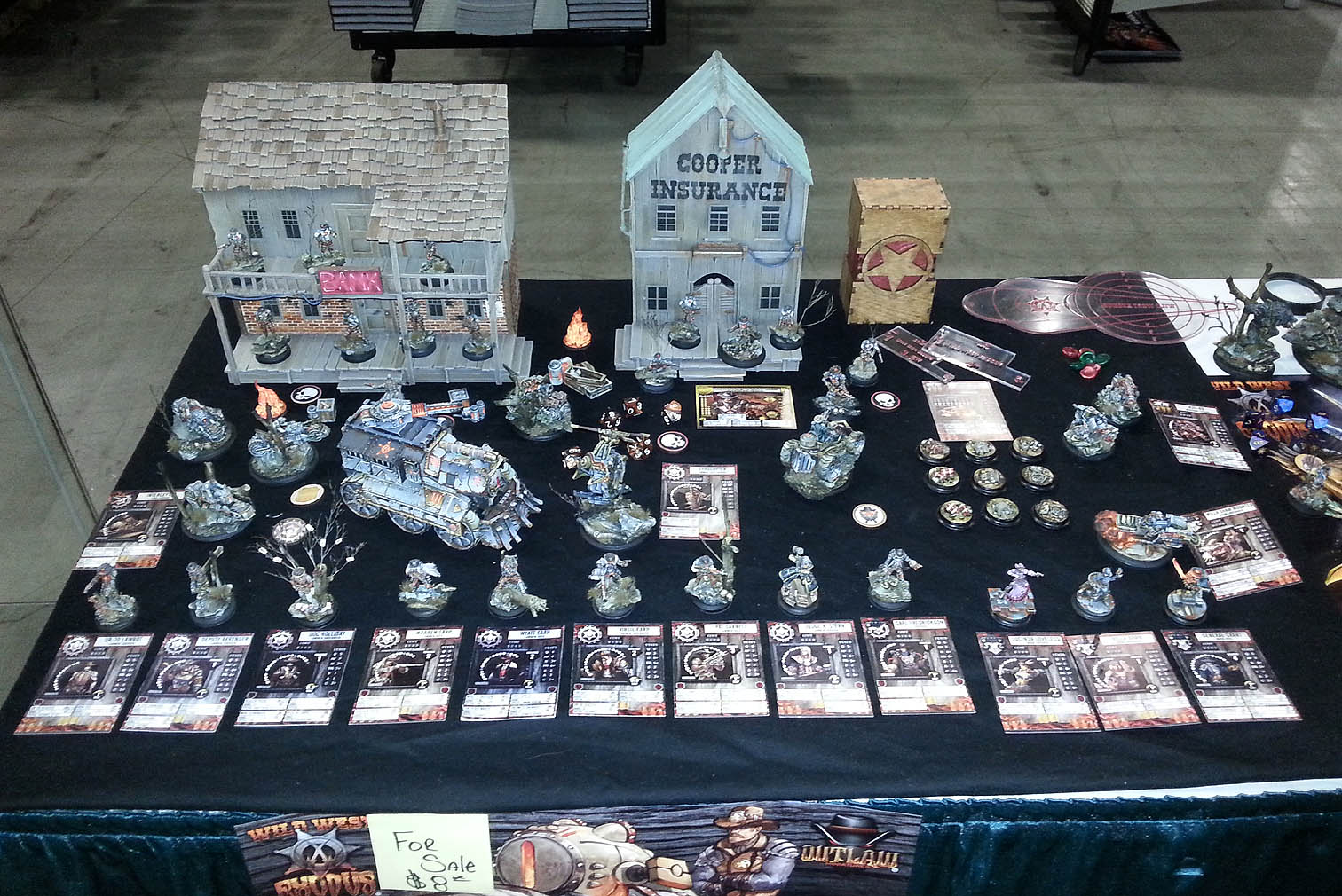 It was also fun to see the WWX terrain in person!  I had seen the pictures online for years.

Even Lathan's Burn in Designs card holder made a nice backdrop. 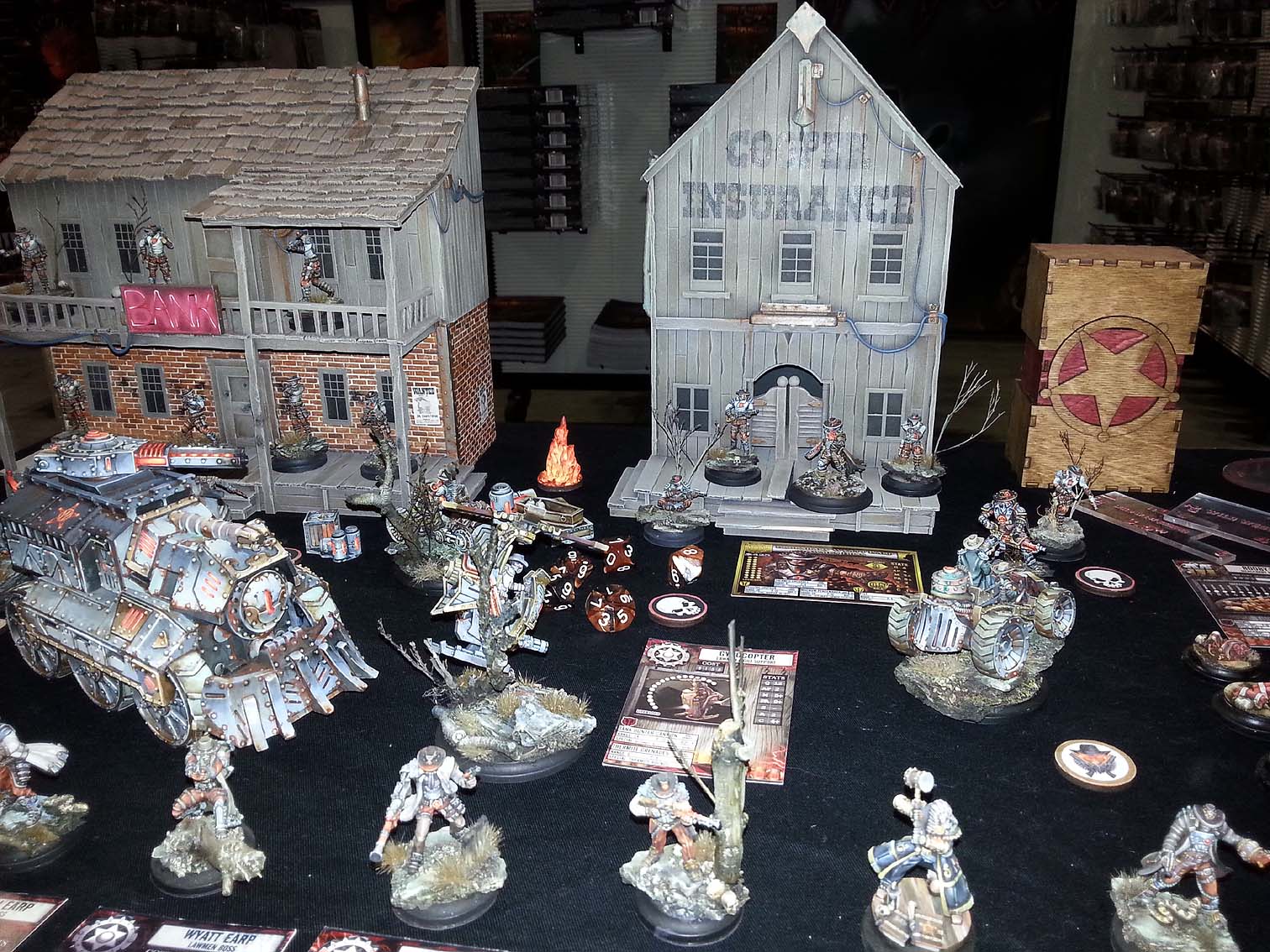 There were lots of costumes, but I happened to know some of them pretty well.  Here's Rich and Belle on their first day of costuming. 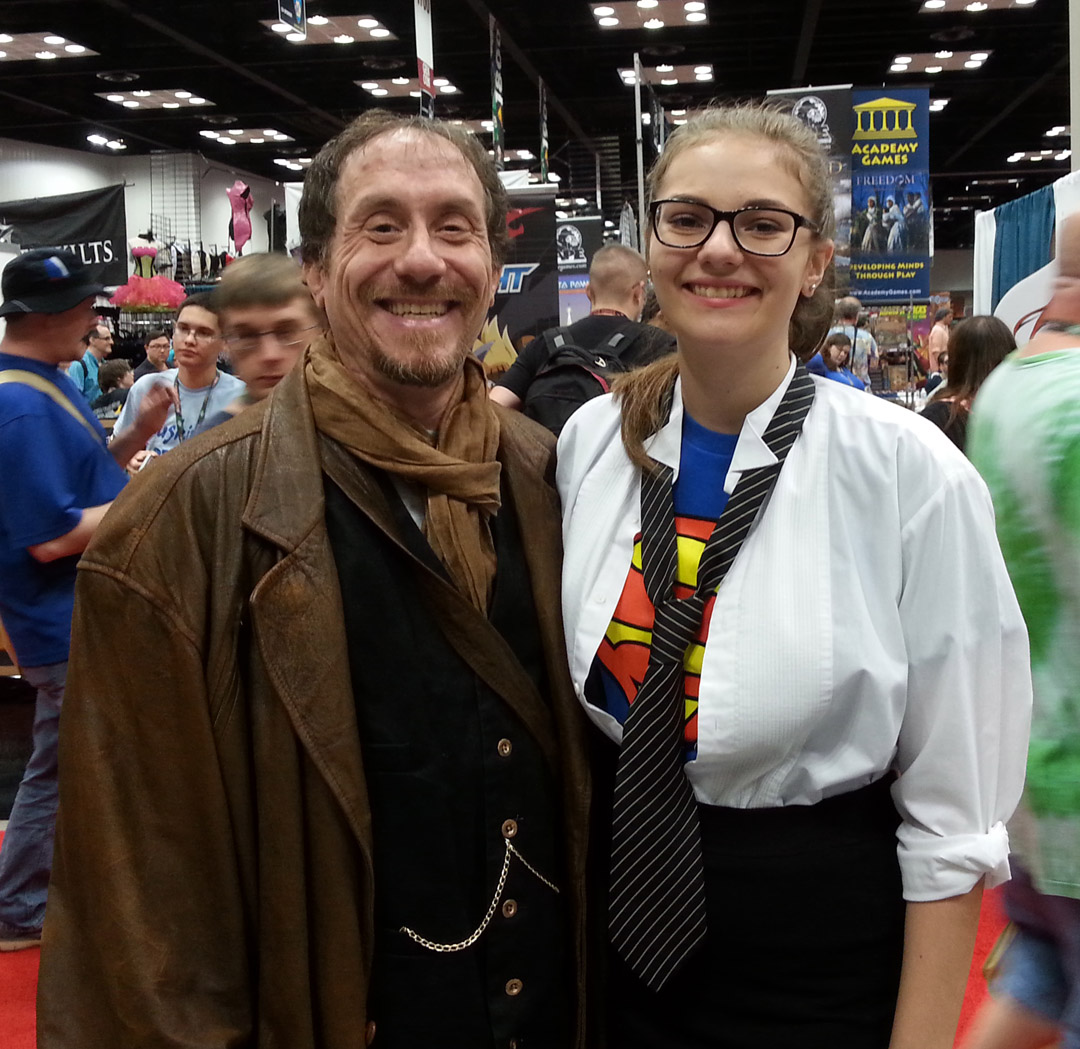 The Addams Family!!!!  They were quite a hit, and hundreds of pictures were taken of this fine looking group. 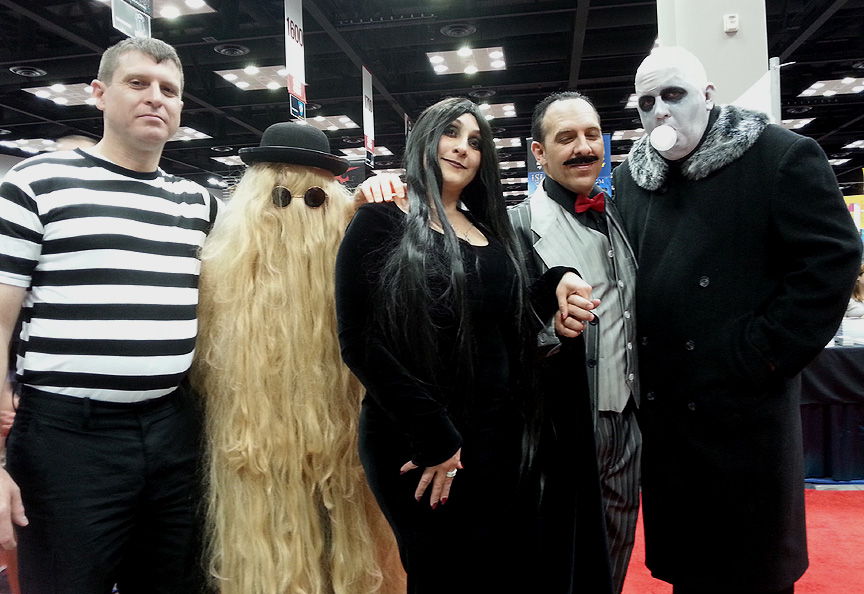 Rich and Belle at it again.

Belle did major makeup magic with some simple homemade ingredients, and Rich created a safe chainsaw.  That zombie doesn't stand a chance!!! 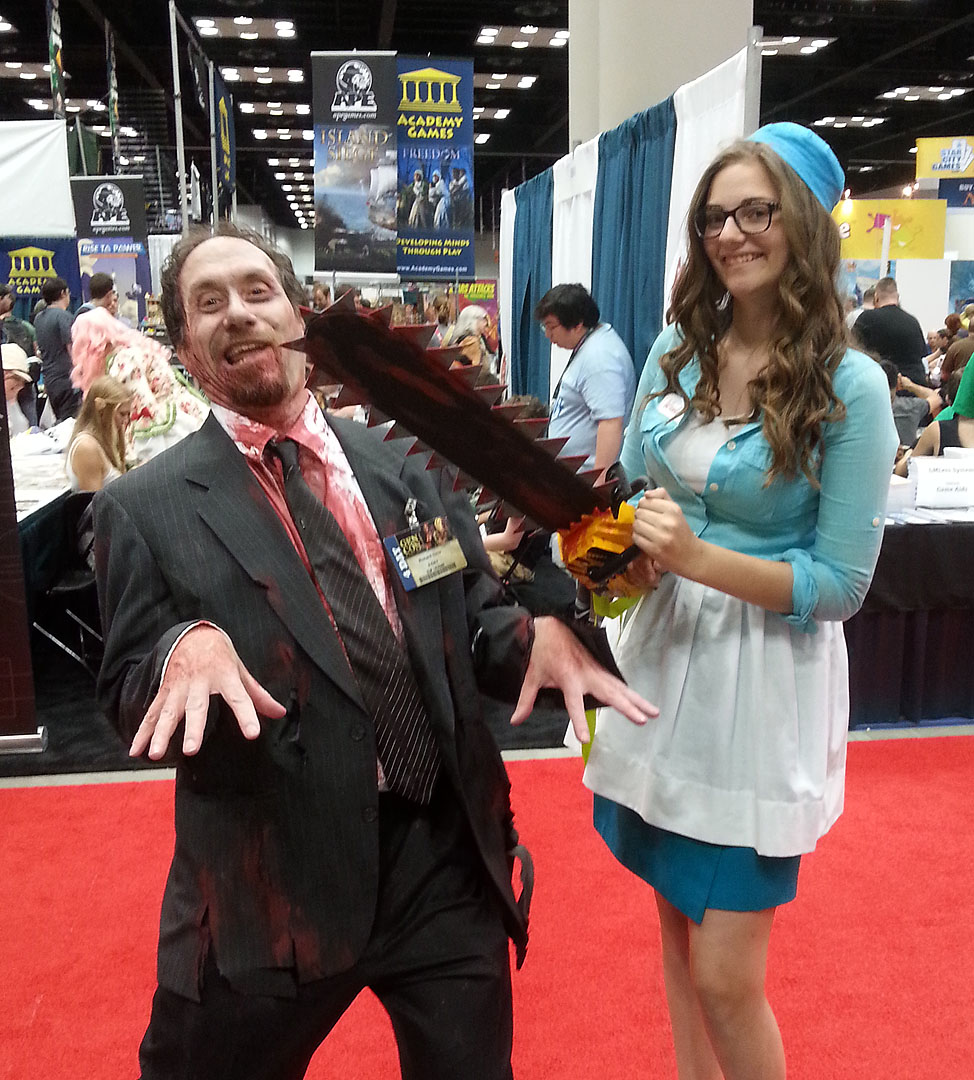 Sunday was an unusual day, as I had to take over the demo game area unexpectedly.  I did a number of them, but they were definitely a lot more involved than the usual faire. :-)

The final demo lasted well over half and hour, and they kept at it, playing to a dramatic conclusion.

Speaking of conclusions, it was time to make like the wind and get back to the Windy City!

I feel very fortunate about how everything worked out.  While I had not intended to be at this GenCon, I had formulated ideas about what I would want to accomplish here before I had even left in 2014.  Thanks to Rich for letting me bounce those ideas off him for many months!

Thanks to Jen and Roy, Chuck and Theresa, Dan, Mike, Fletch, Ron and everyone else who came by, said hi, brought me food, talked about minis, painting, and just about anything!  It was great to see Kevin and Laura as well.

You will also be seeing some interesting new things here from Scale 75 and GreenBrier Games, so stay tuned!!! 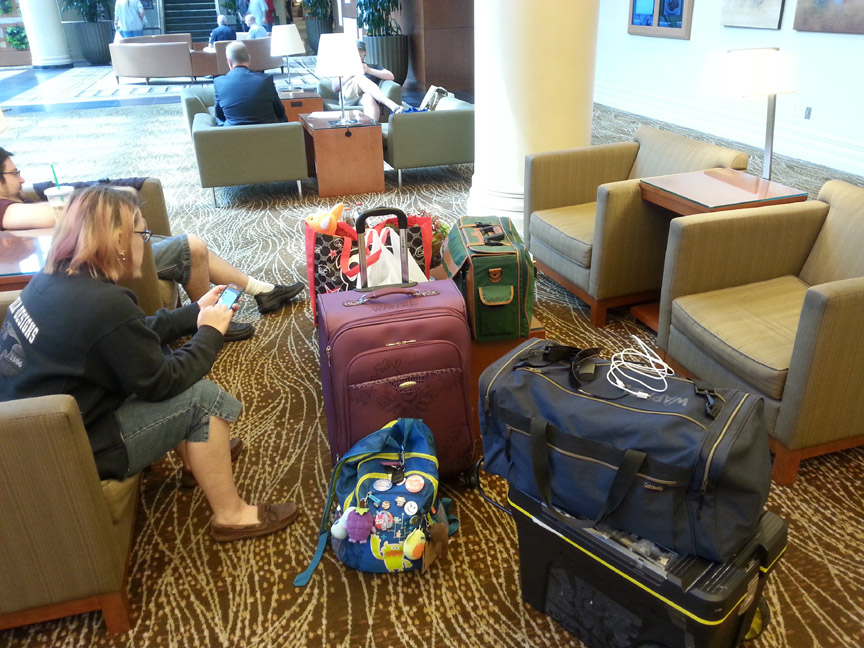 Posted by wappellious at 11:13 PM No comments: 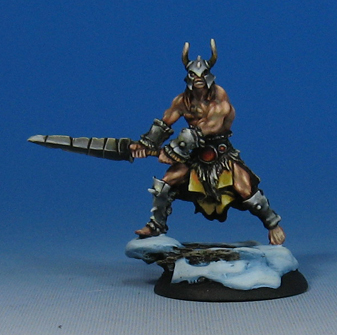 With Sunday night comes the end of GenCon 2015.  Thanks to everyone who helped make it memorable and special!!!!
I will have the photos processed and posted tomorrow.

I have lost count of how many of these barbarians I have painted from Red Box Games :-)

As you have seen, all of this has been painted to match a certain theme and setting.

I may have some big army shots in the next month or so from the buyer, who has been using these in his games, so stay tuned!

Posted by wappellious at 2:40 AM No comments: