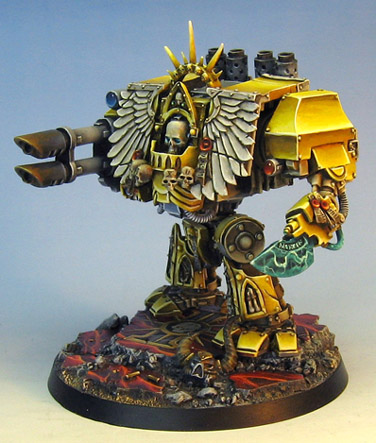 This is by no means as elaborate as some of the other dreadnoughts I have painted, but it was one of the more unique dreads. 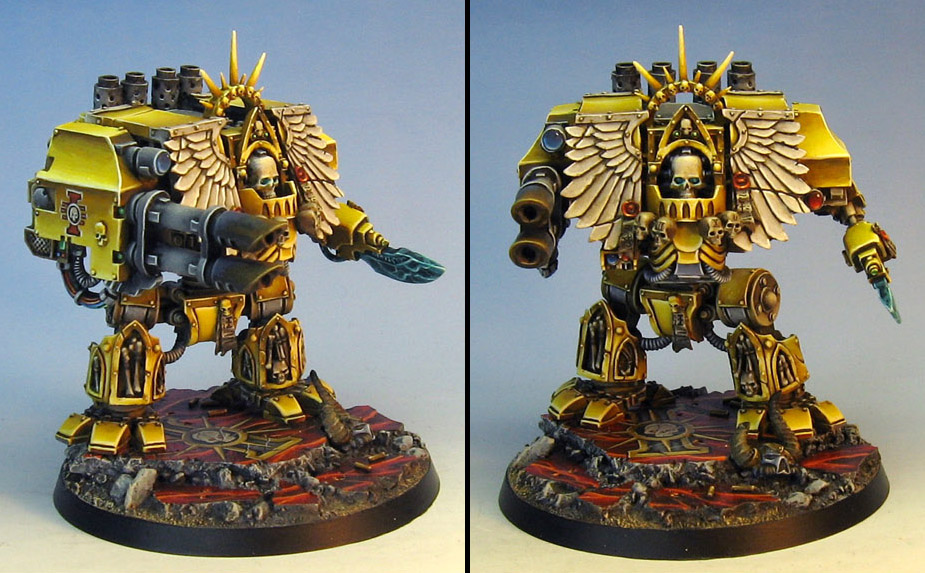 I t was a very long time before I got to try a second one of these (for the Angels Solarus), and this original piece posed a lot of challenges at the time. 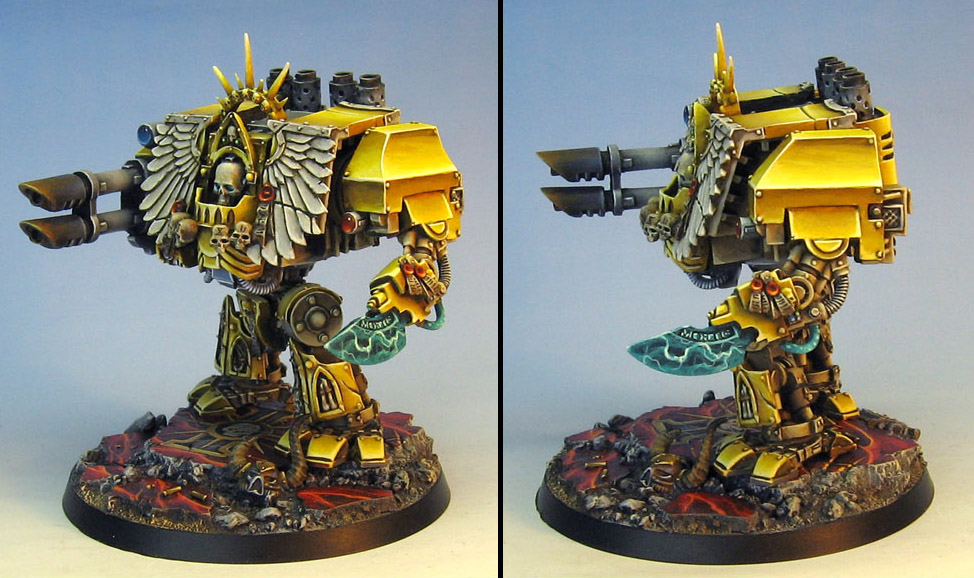 I am pretty sure that I was relatively new to dreadnoughts at the time.  Until then, I have been sculpting my own from scratch.  That was a lot of fun, and I look forward to trying that again armed with the knowledge I currently have :-) 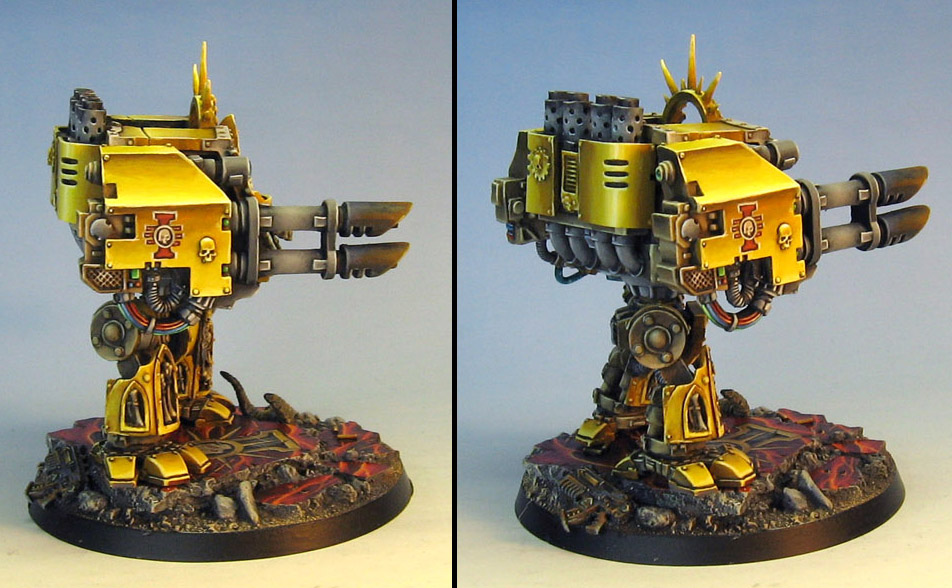 I would love to try this guy again in in a deep purple/blue scheme, to make the wings really jump... 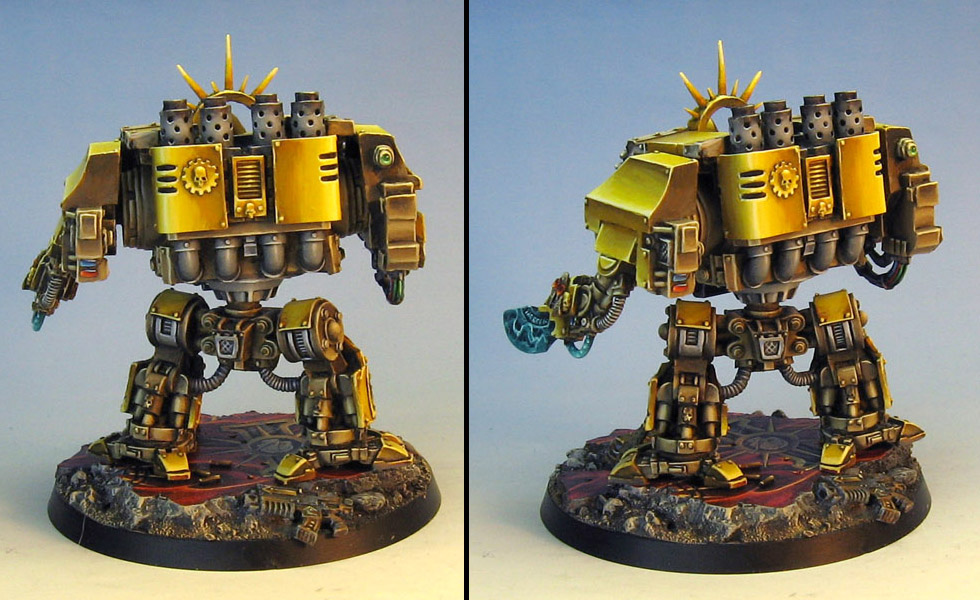 Posted by wappellious at 8:54 PM No comments: 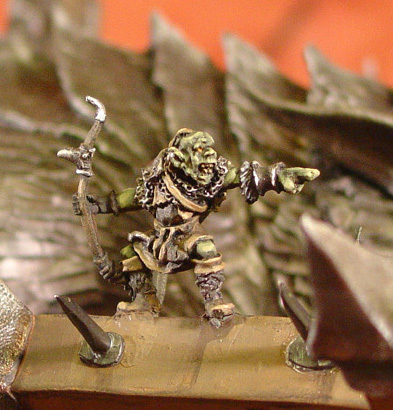 This was my last step before the final assembly.  I thought it was very neat in the Return of the King movie to have the orc archers firing back up at the walls of Minas Tirith.  I also had a handful of metal orc archers.  Of course, this would be much easier today with the plastic variety!

Normally I would have done my NMM on these, but with all the metallics used on the warmachine, it only made sense to carry that through on the archers as well. 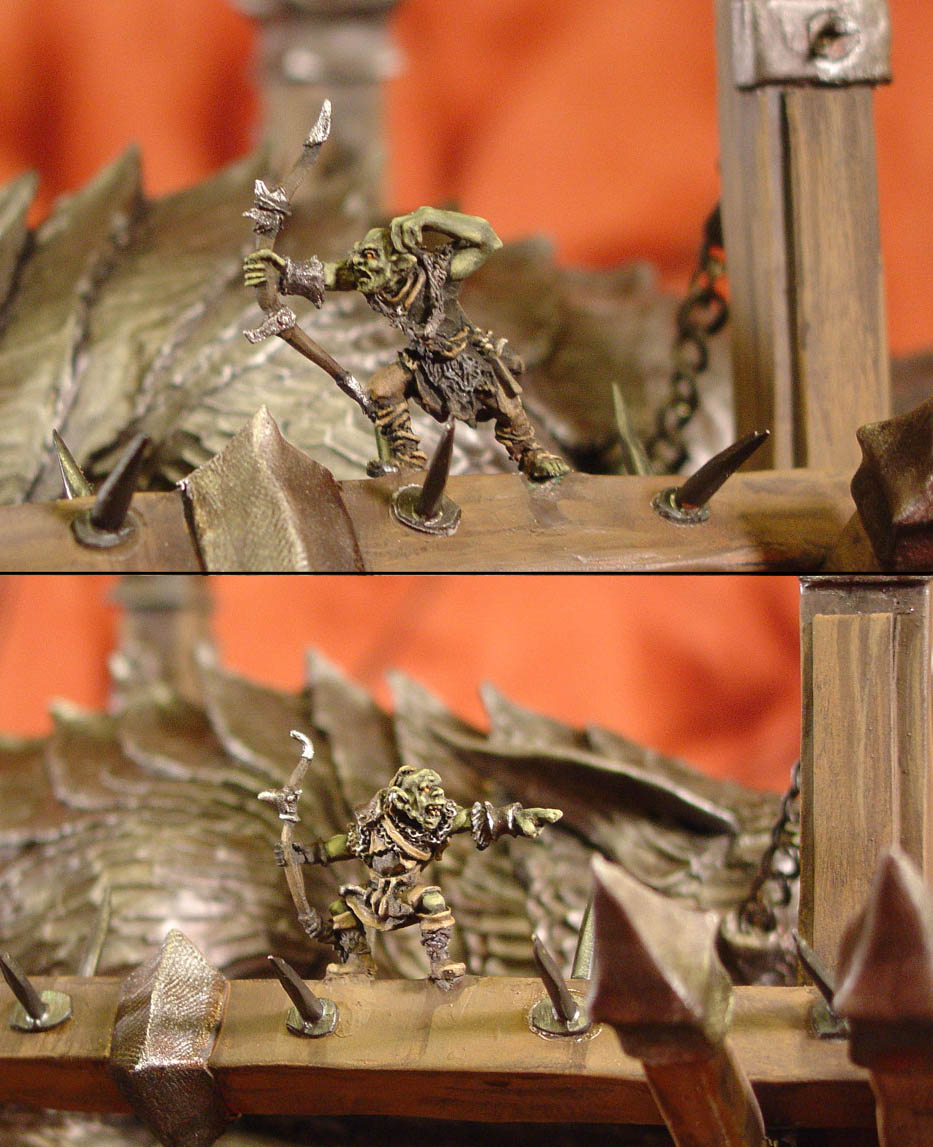 I had to carefully pin them to the apex of each horizontal beam, and hope that the scale matched the way I anticipated it would.  From the images I had, they were very very close! 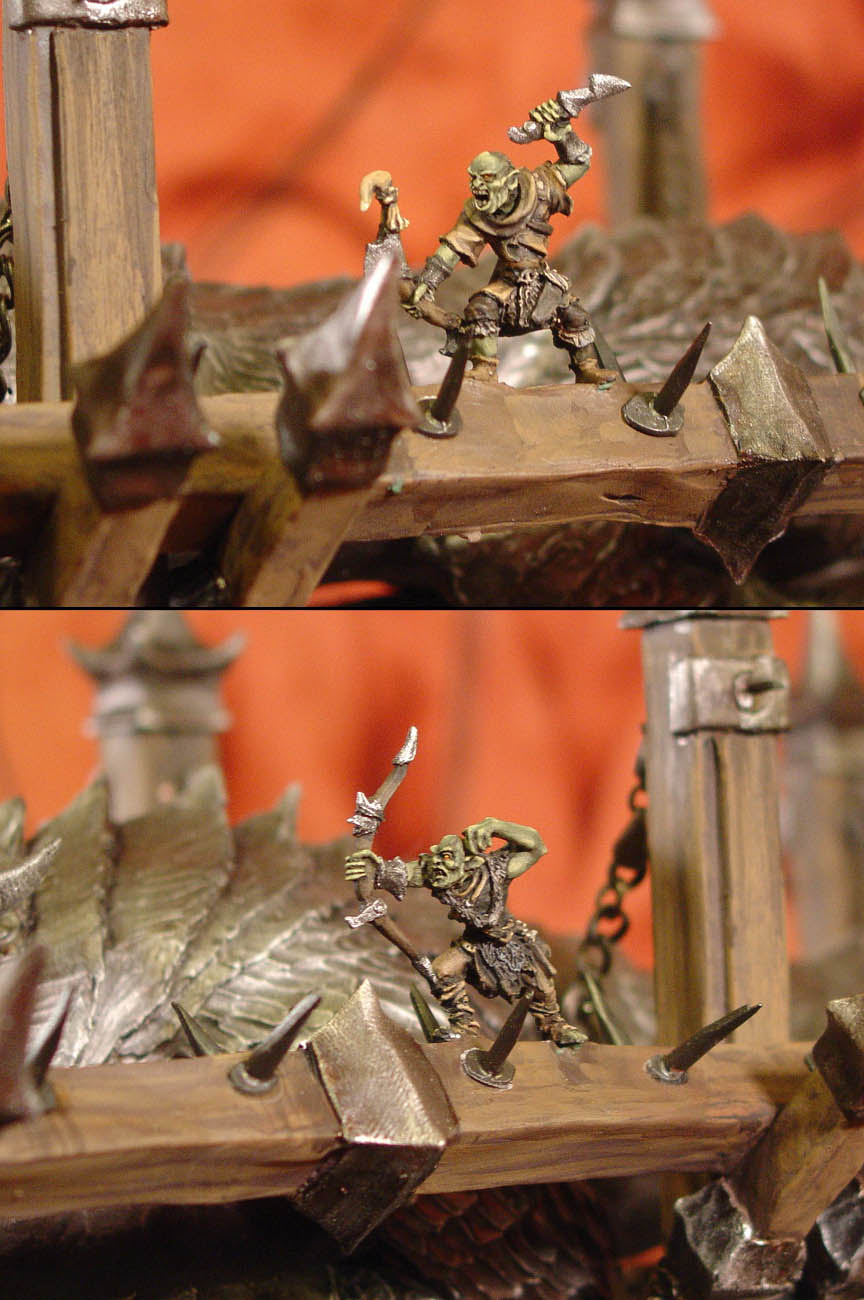 This is what it looked like before I attached Grond! 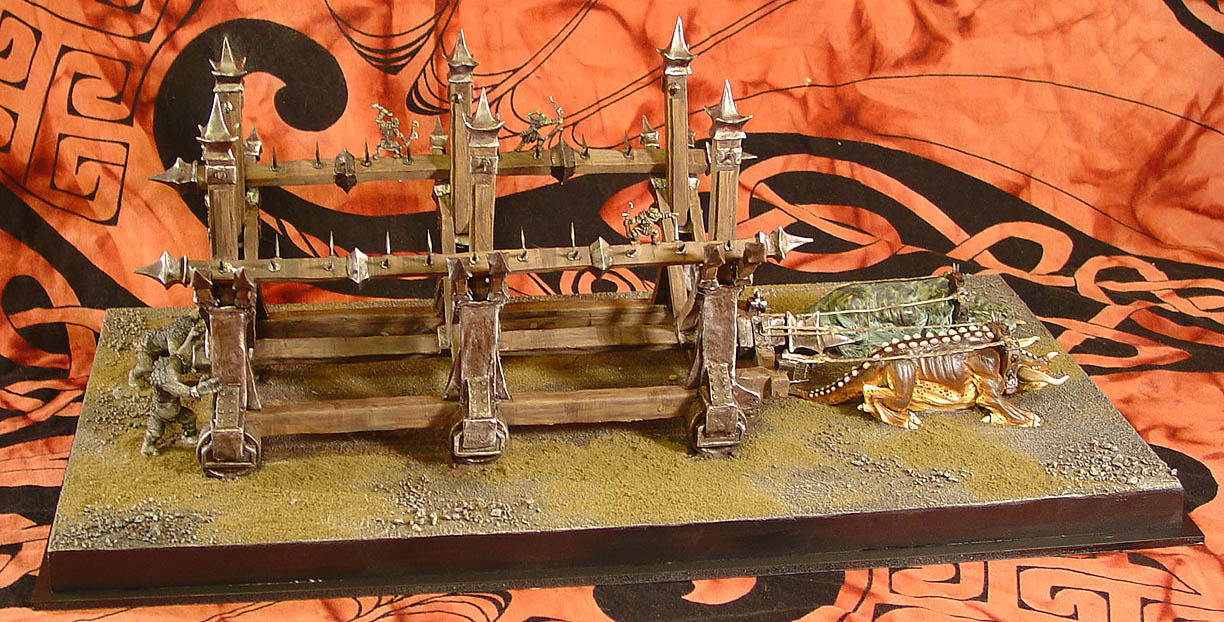 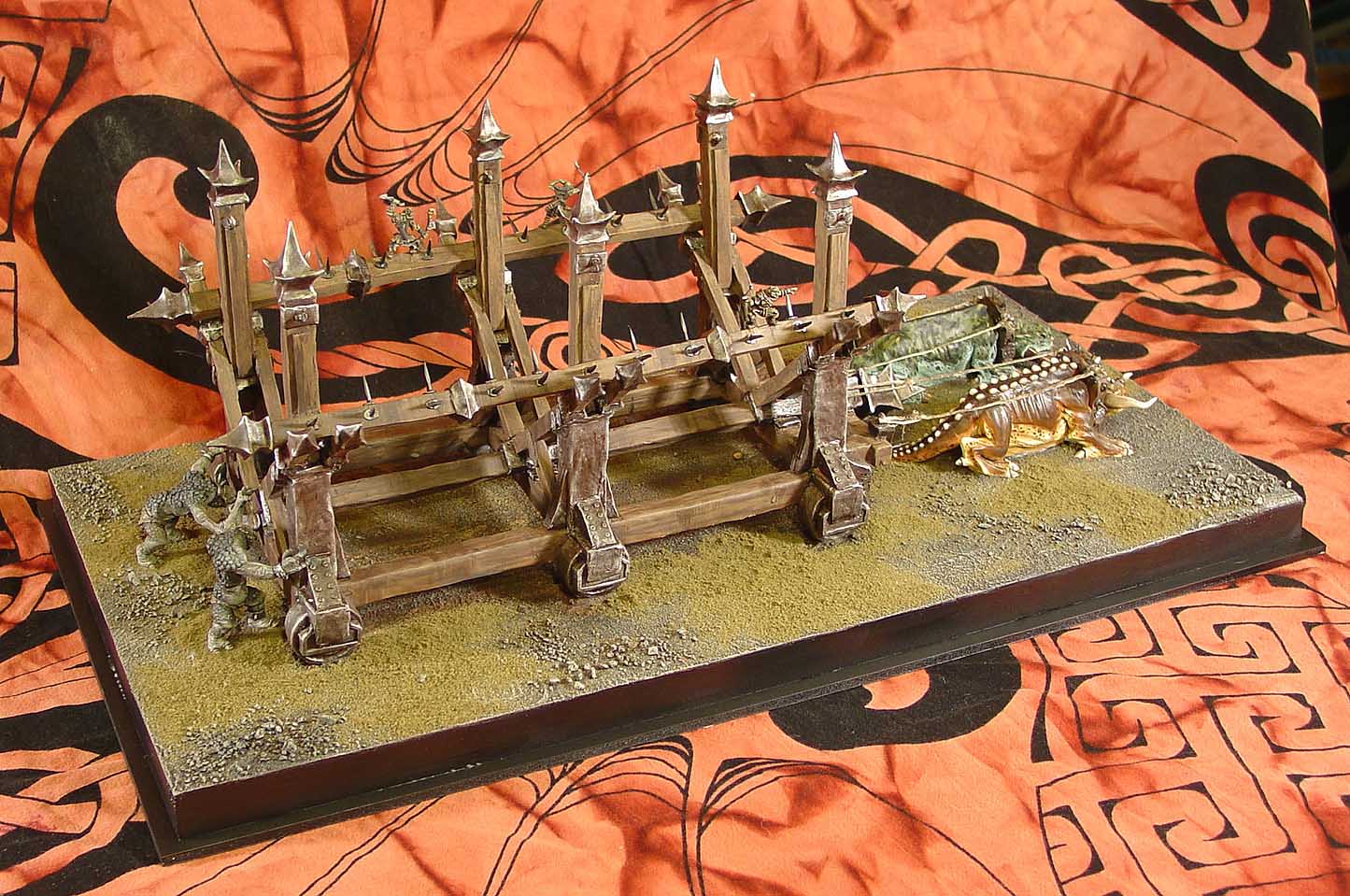 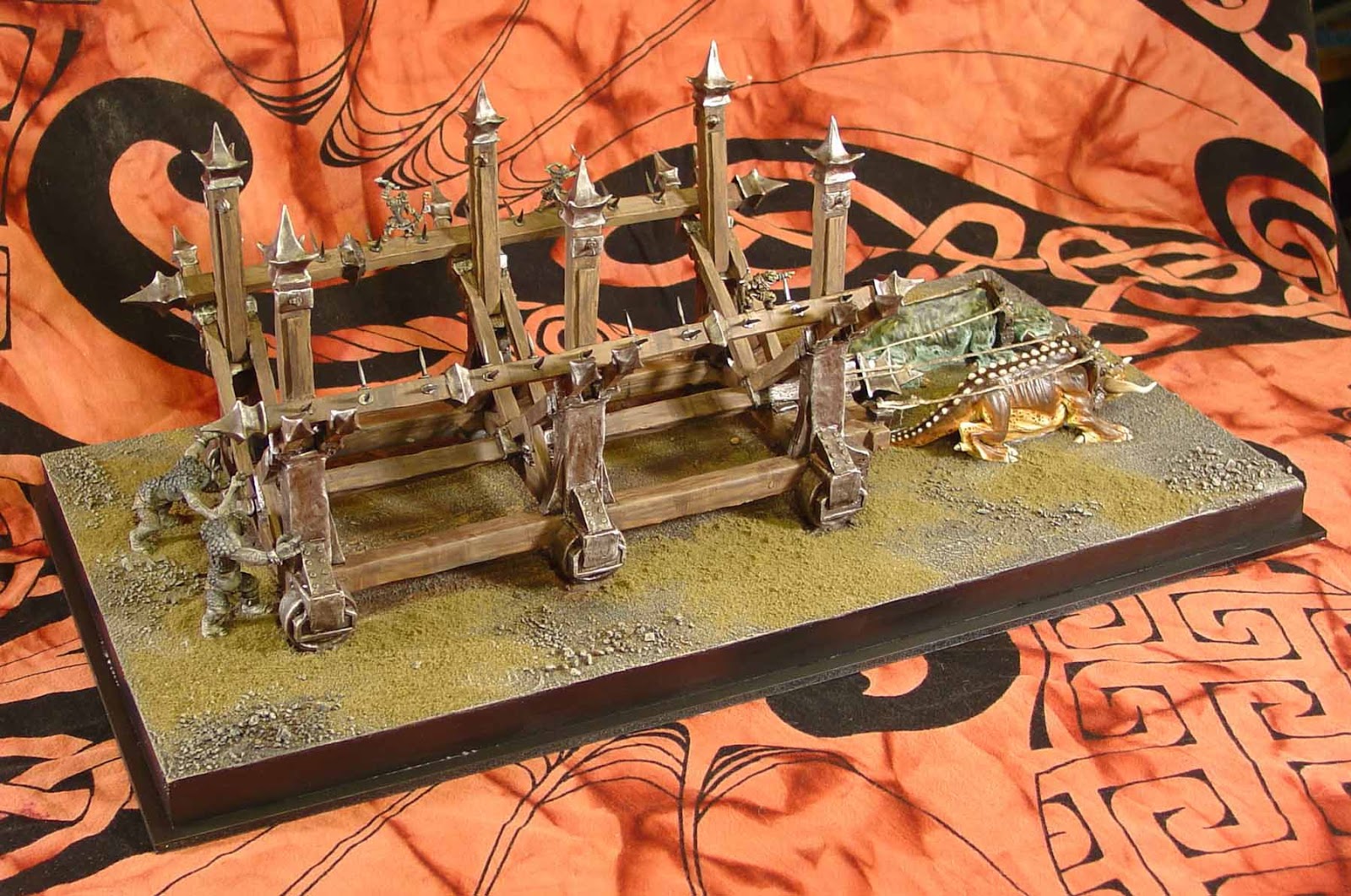 When you have some extra cave trolls... 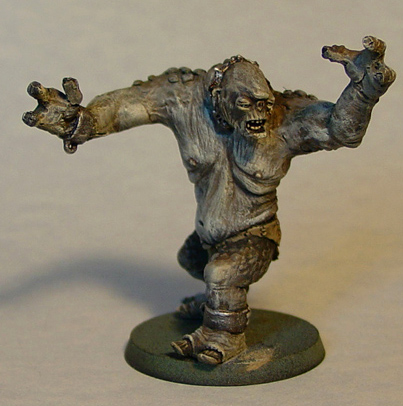 OK, time for the promised Troll images!  They are not terribly fancy, but they were incredibly difficult to convert.  These were metal, of course, since this is January of 2005, long before the trolls became plastic. 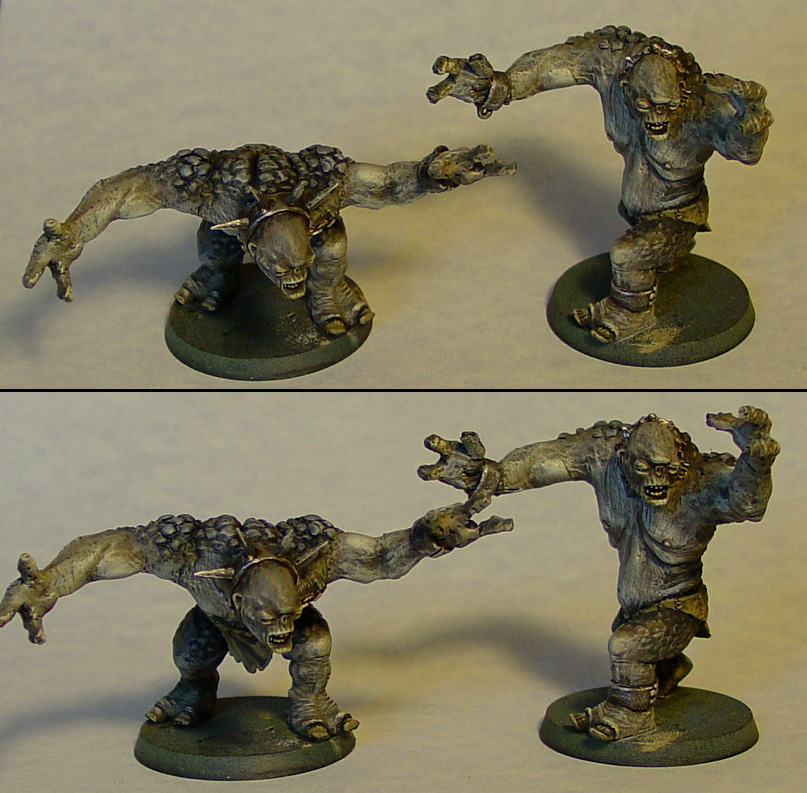 Also, this was many years before I would even hear about razor saw, much less own one.  If I remember correctly, I had to gradually chip away at areas with giant metal files, and even a tin snips!  I had to green stuff a lot of the rough textures on the back of the hides. 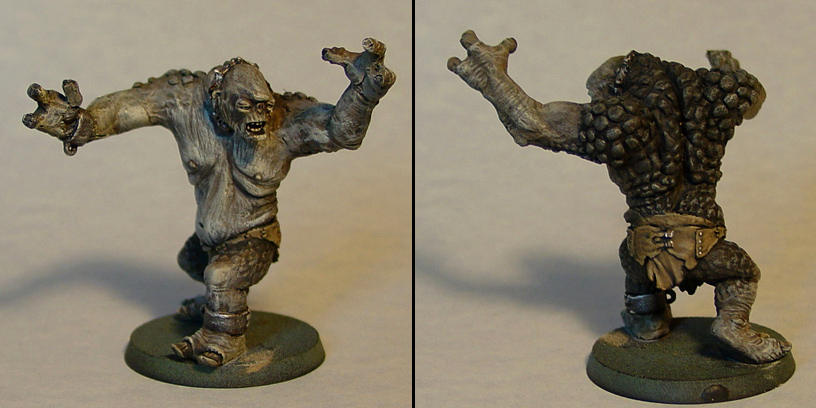 Once all that was done, it was time to get them positioned on the diorama itself.  That was difficult as well.  I had done as much "dry fittig" as I could when I was converting them, but things always seem to be a bit off when you secure the piece to the larger construction.  It's hard to factor in the anchors and other items meant to secure these guys to the display board.  All it takes is a tiny fraction, and it gets magnified in a hurry. 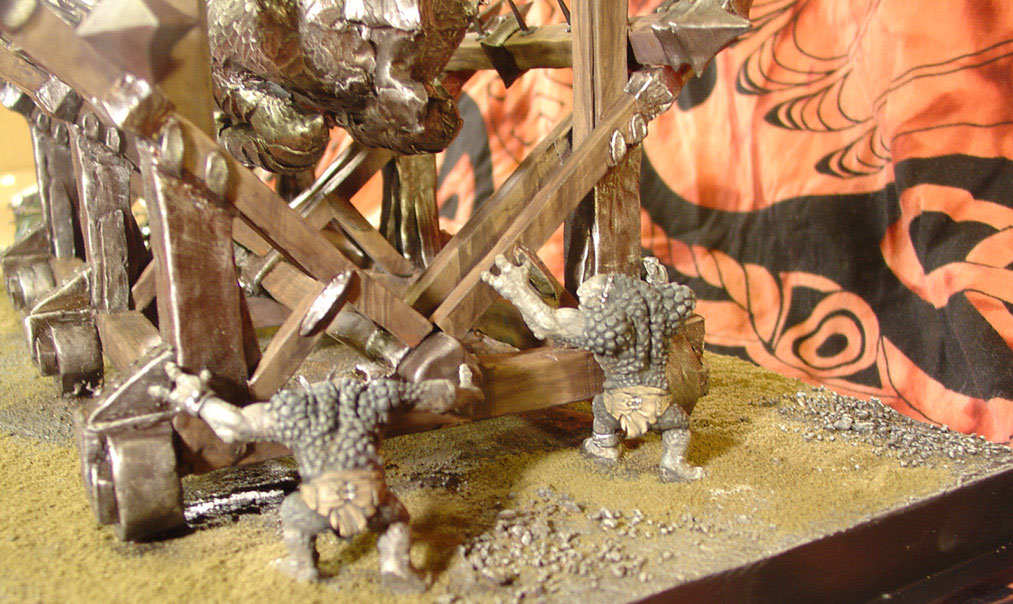 So, a few views of the trolls helping the beasts of burden! 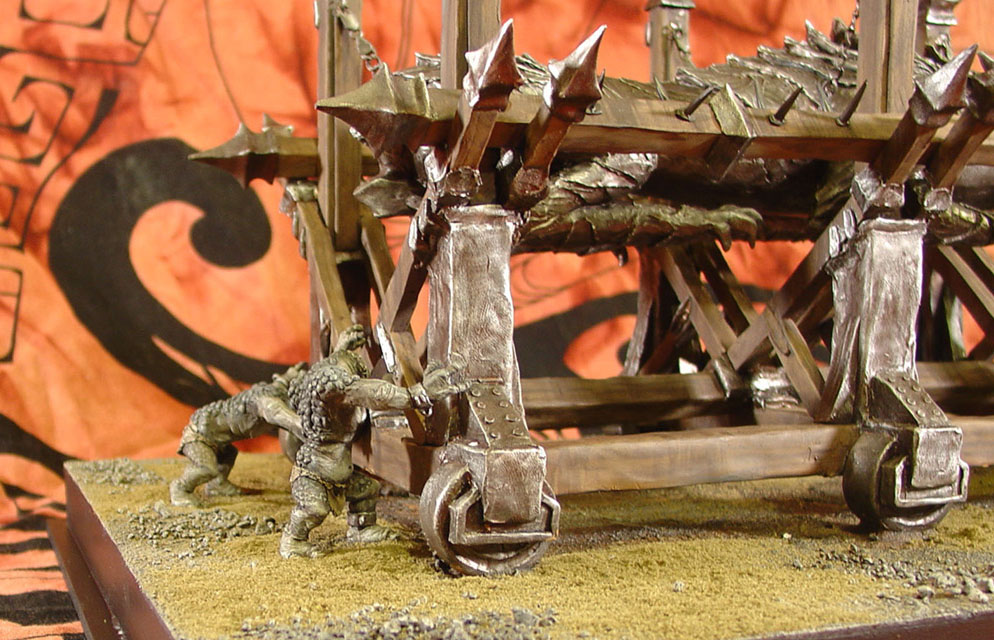 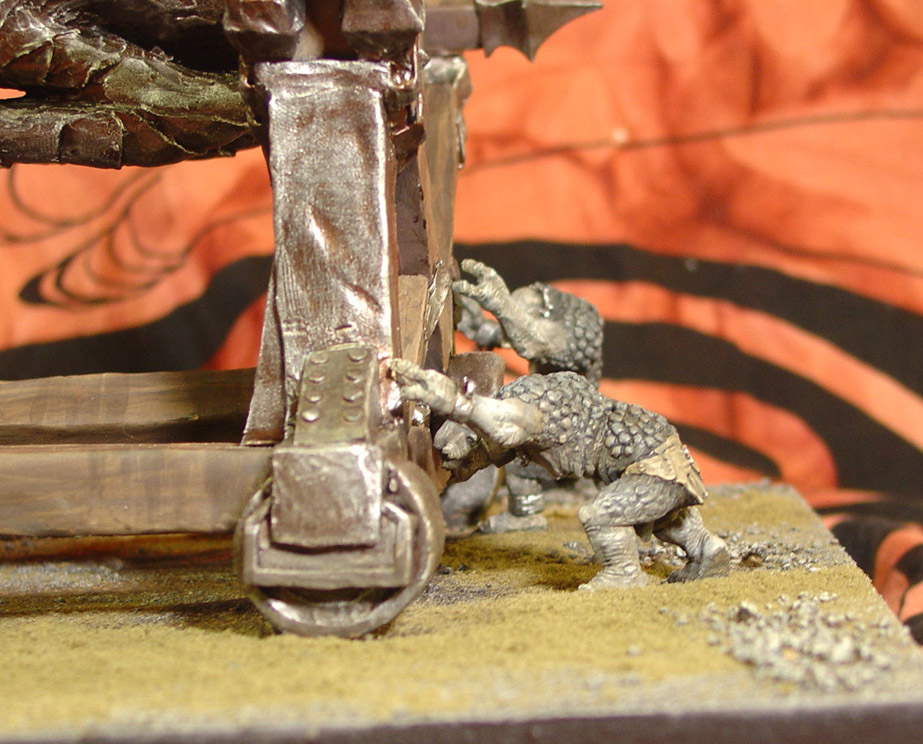 Tomorrow I will post the images of the orc archers, and then there will be a few more posts with the entire finished diorama! 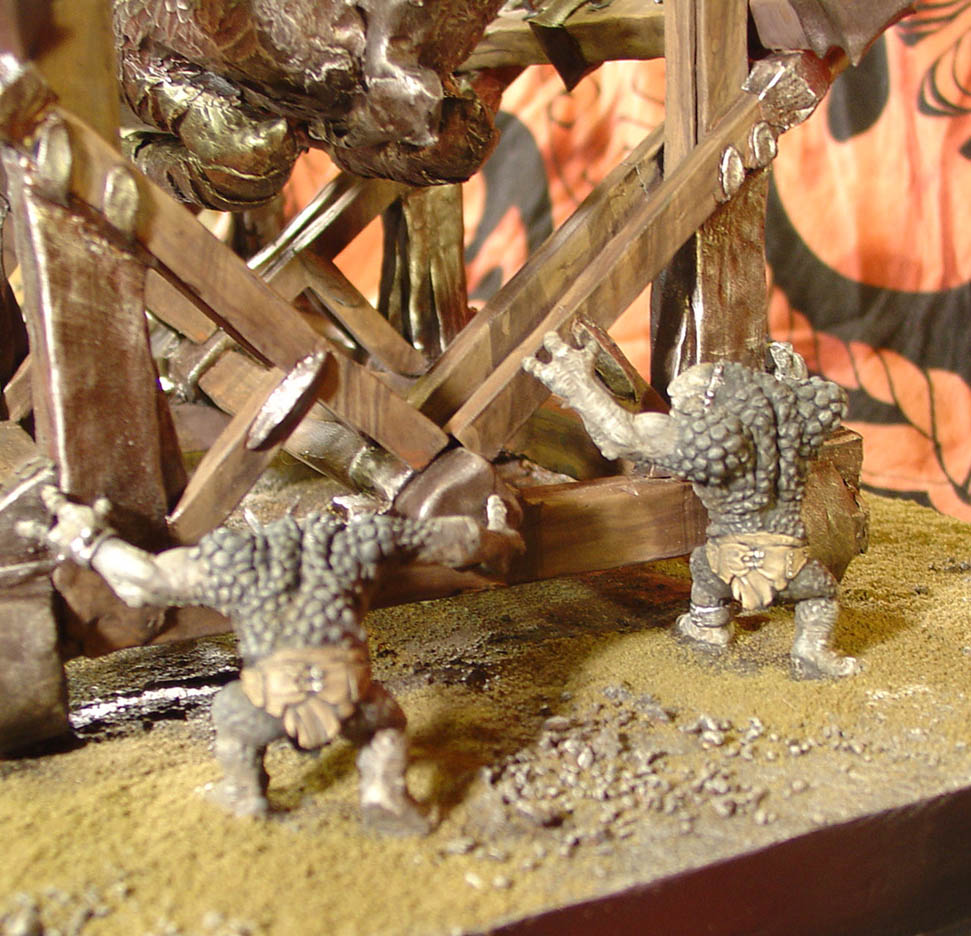 Posted by wappellious at 4:32 AM No comments: