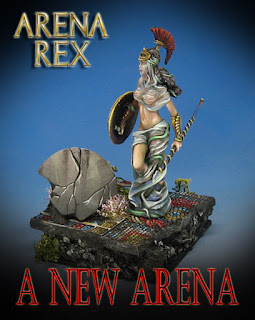 This Arena Rex figure was the first 'regular' fantasy miniature that I painted with oils.  I did a portion of the painting in a facebook live session using the Mig AMMO OilBrushers:

While I had painted this once in acrylics, people wanted to see how I would approach the skin tones, NMM and transparent cloth in oils.  In effect, the principles are all the same, even though the approach works out a little differently.

The advantage of oil paints is that they have an extended drying time, thus allowing you to mix on the surface far longer.  That is also the down side, as you can't so several layers of glazing in rapid fire succession!  I normally do a lot of glazing on my figures, so I have to be very mindful of this.

The base itself was made from a few elements.  The mosaic tile texture was created with the Green Stuff World texture rollers.  As usual, that was rolled out onto some sculpey clay, and then positioned on top of some thick cork.  I sculpted the column top out of sculpey clay as well.

The first version of this figure was based on a 'legal' sized base, but this time around, I wanted to make more of a diorama around it.  It's not very often that I have a chance to make a very large base with the texture rollers!