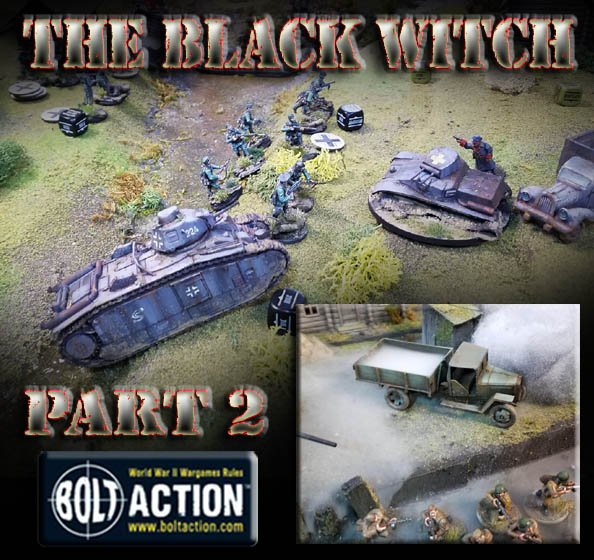 We return to the desperate struggle to capture or recover lost German tank crews, the downed Soviet pilot and the German officer.

Losing their transport so early had cost the Waffen SS dearly, allowing the sniper to pick off their light machine guns and keep them pinned.

Only the SDKfZ 232 continued the fight on this side of the field, as the Pioneer unit had to support the right flank, as a dust trail was spotted by the commander from the area where the Zis gun had been. 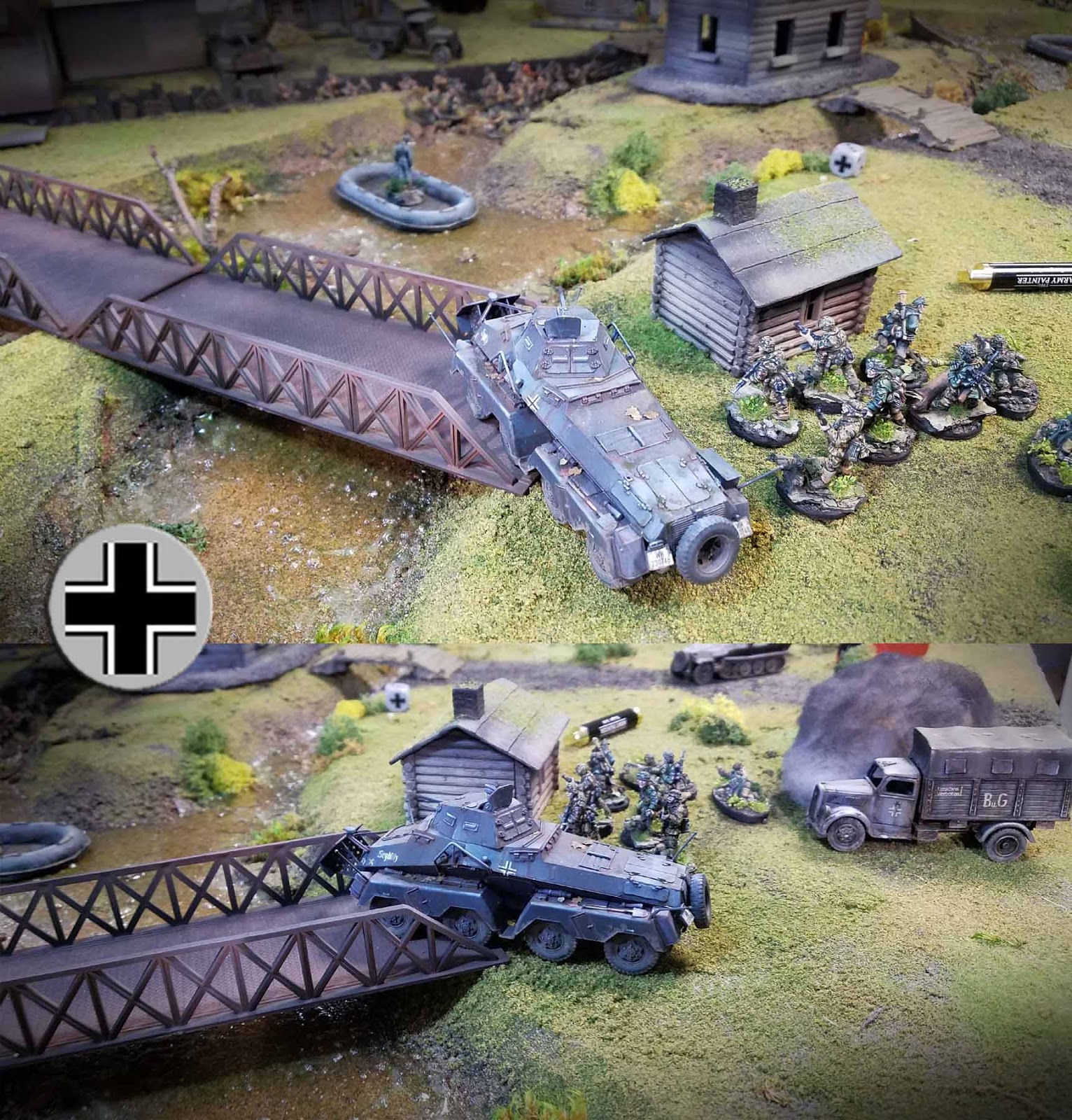 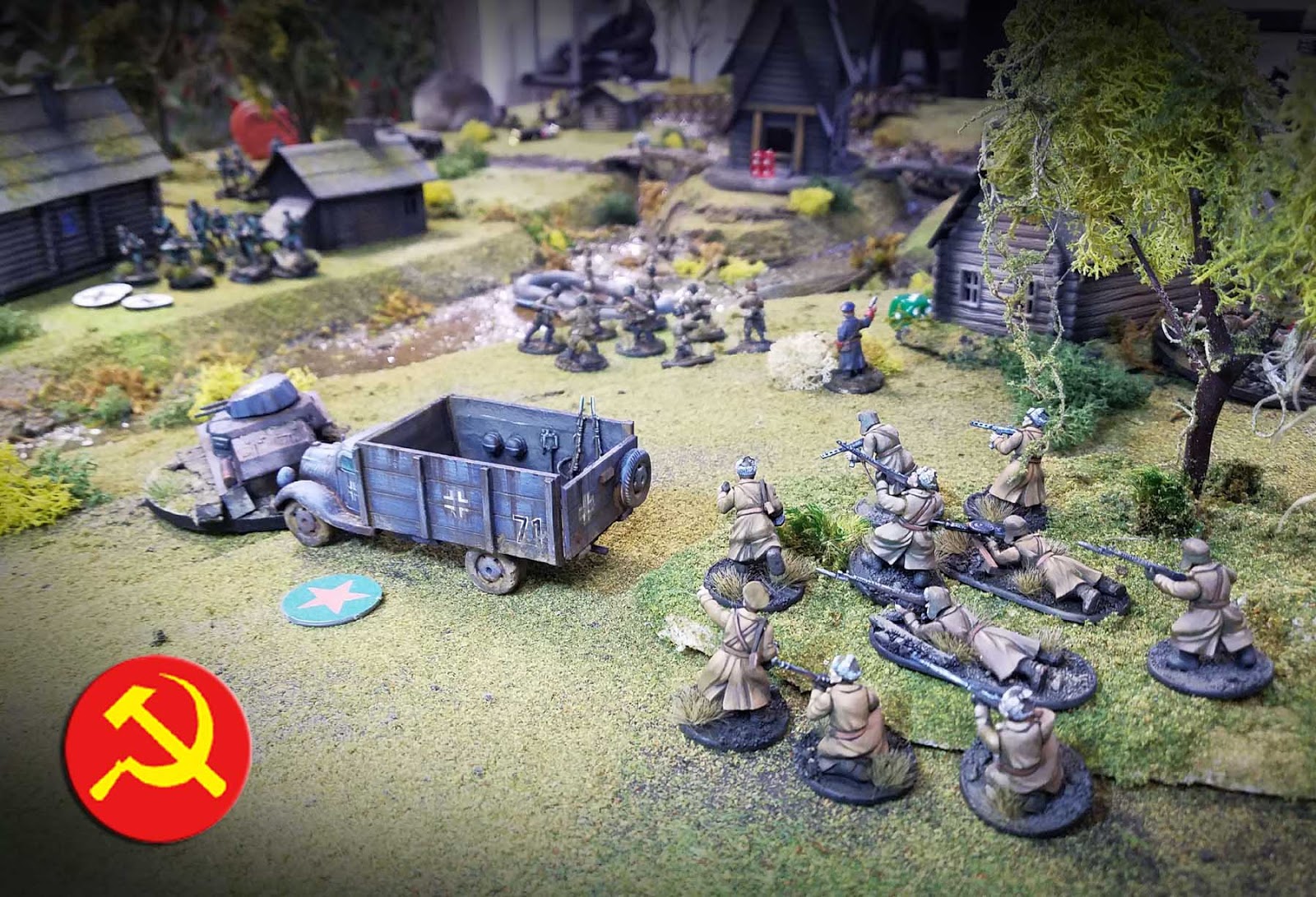 It was now that one of the German surprises rumbled out of the shadows, kicking up a dust cloud of its own! 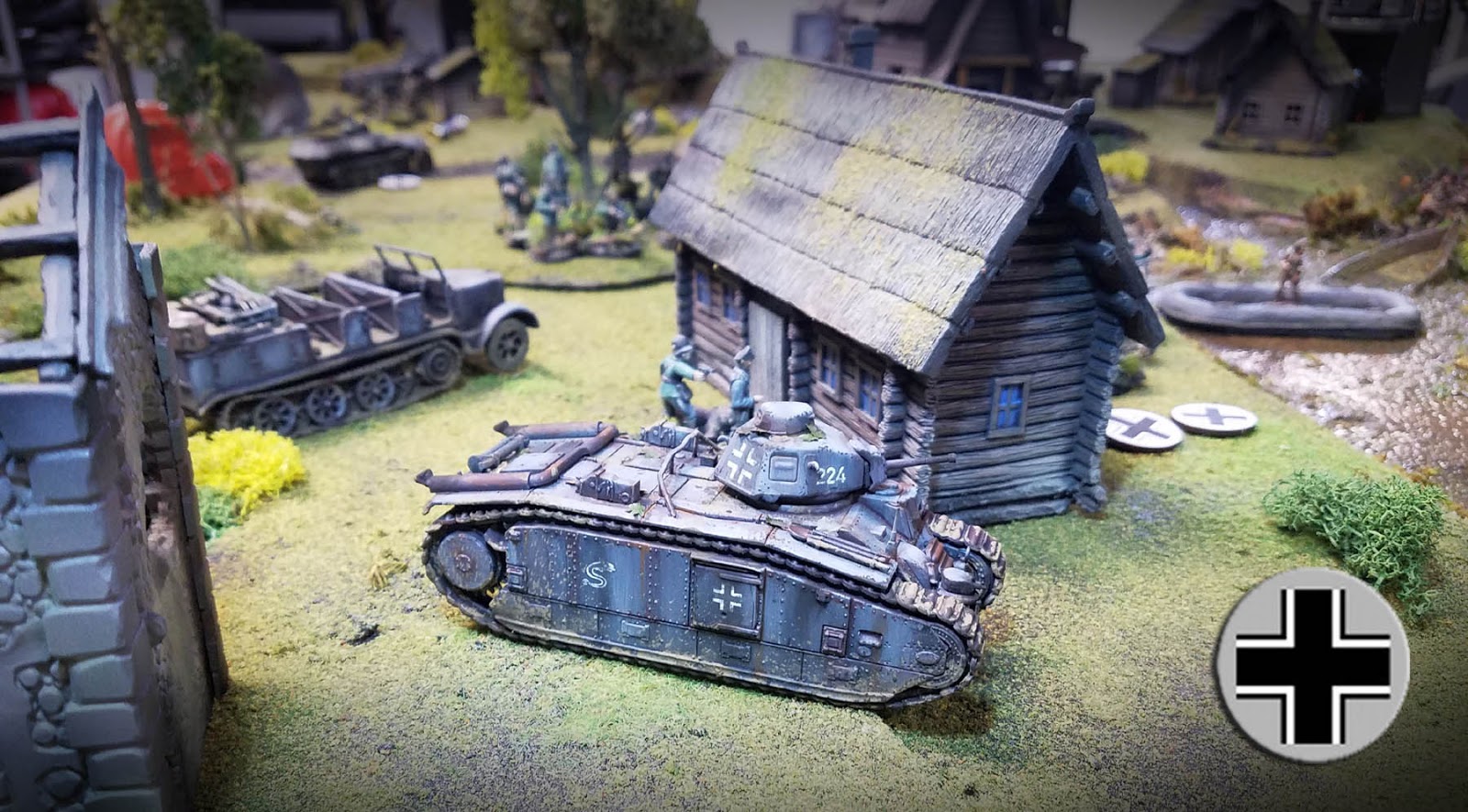 Using the Rad 8 as cover, the Waffen SS saw the officer in the river, who was directing them to head towards the wrecked Panzer and its crew.  He would sacrifice himself to save his tank crews, who had taken on the dangerous mission of capturing the Soviet pilot at his request. 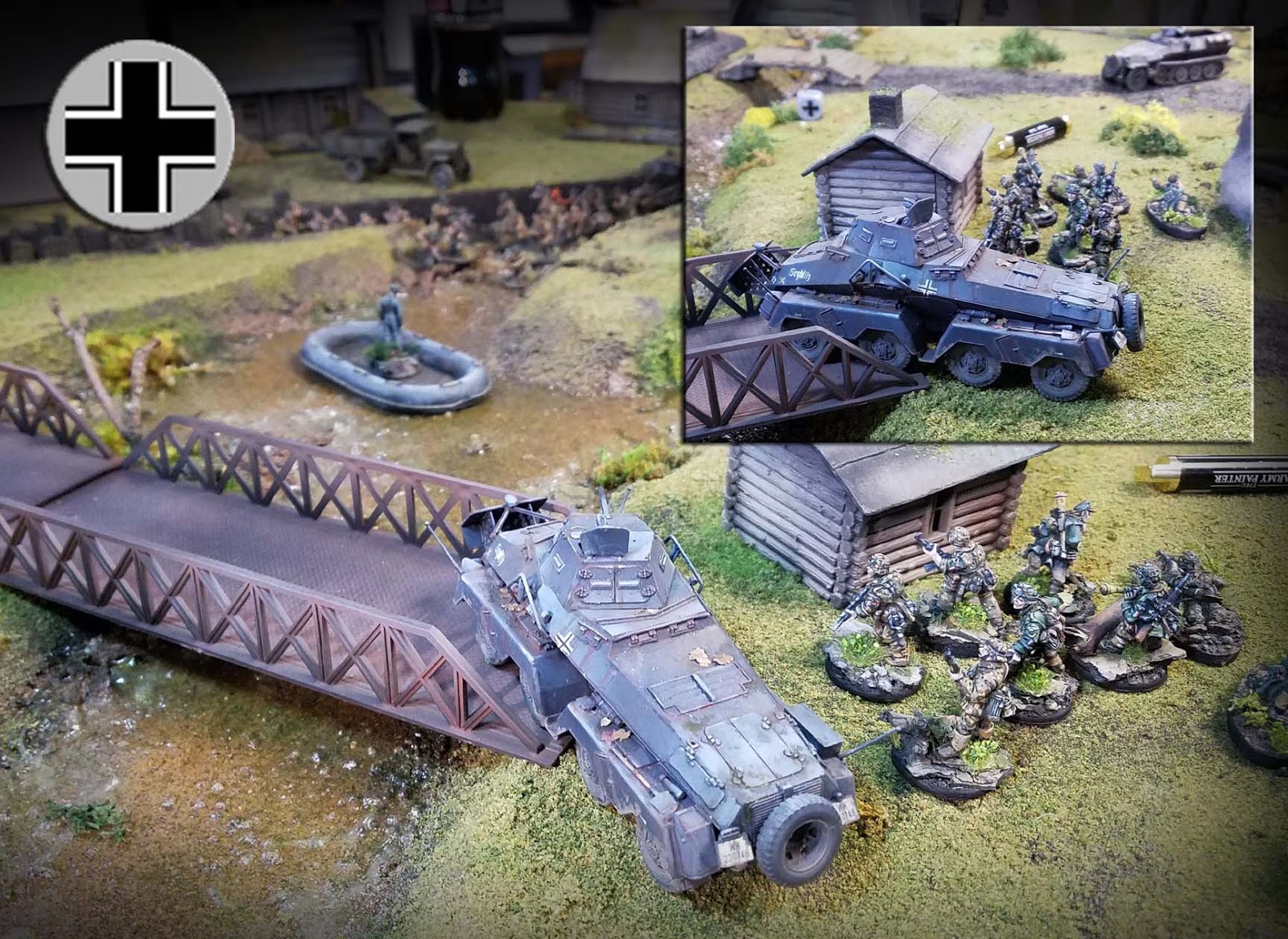 Now the second surprise made its presence felt as the Pioneerwagen fired a direct shot from the squeeze bore howitzer.  It blasted a Ghaz truck to pieces, much to the shock of the Soviets who thought they were relatively safe on this part of the battlefield. 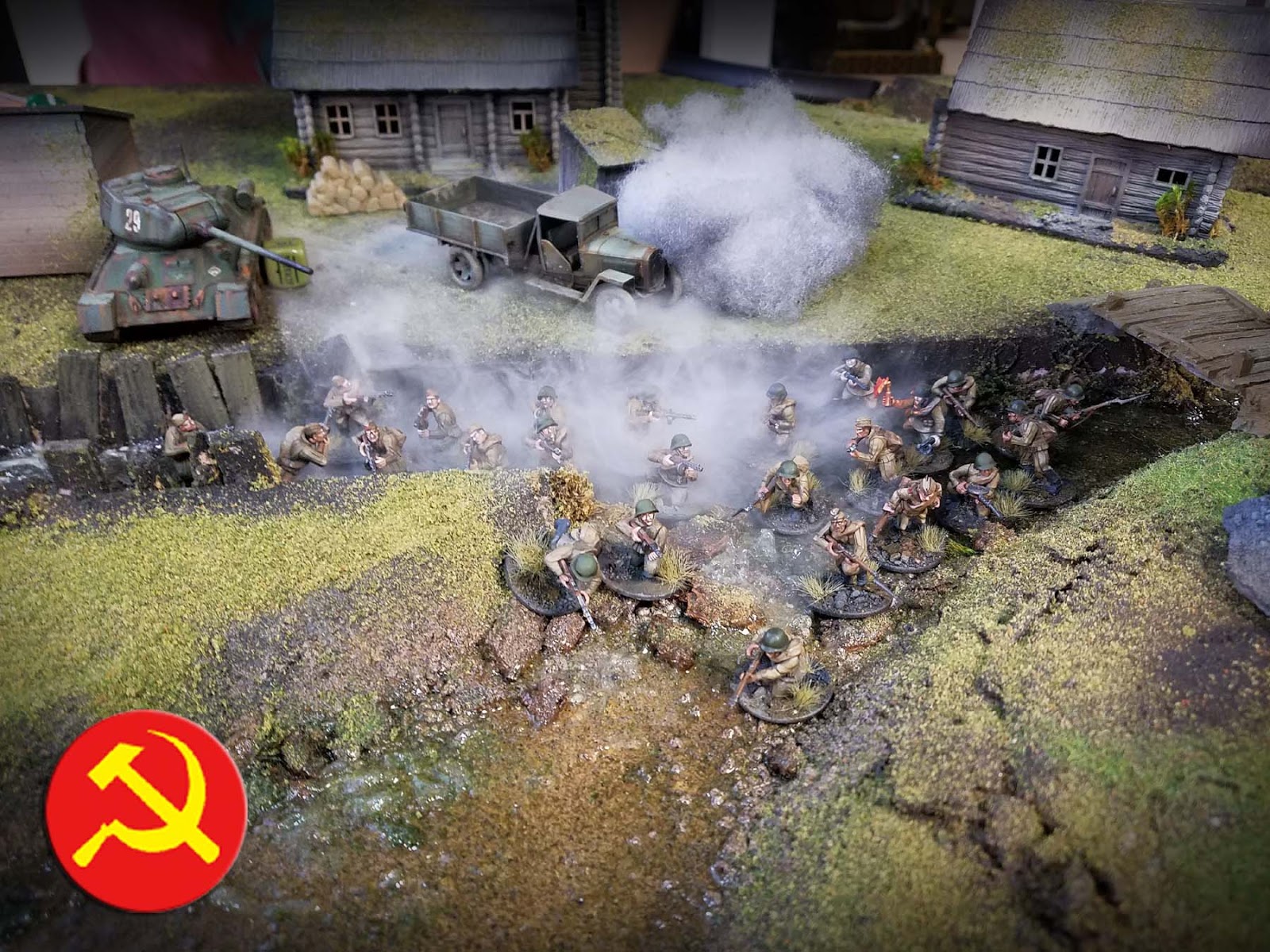 However, the smoke of the blast seemed to create even more cover for the waiting Soviet infantry, now getting even closer to capturing the German officer. 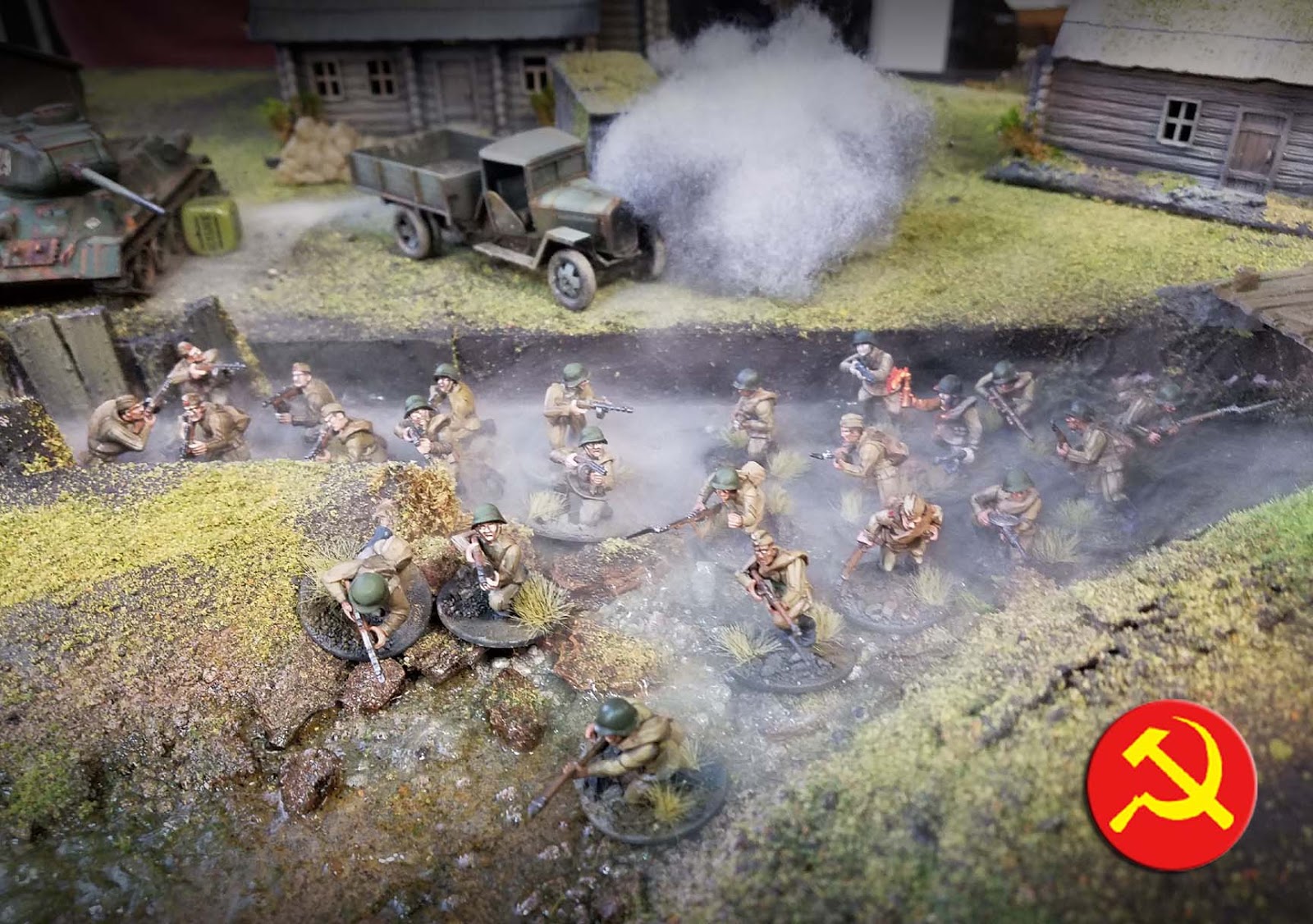 It was not long after the smoke settled from this scene of destruction that the Panzerbusche scored a hit on the T-34!  While it did not take it out, it did cause the crew enough strife to make them spend several minutes to catch their senses again. The Pioneer unit began its move forward, hoping to counter the 3 Soviet units.  This would be problematic, since the mortar was not able to take down the machine gun crews across the river.

Any crossing attempt would be near suicide. 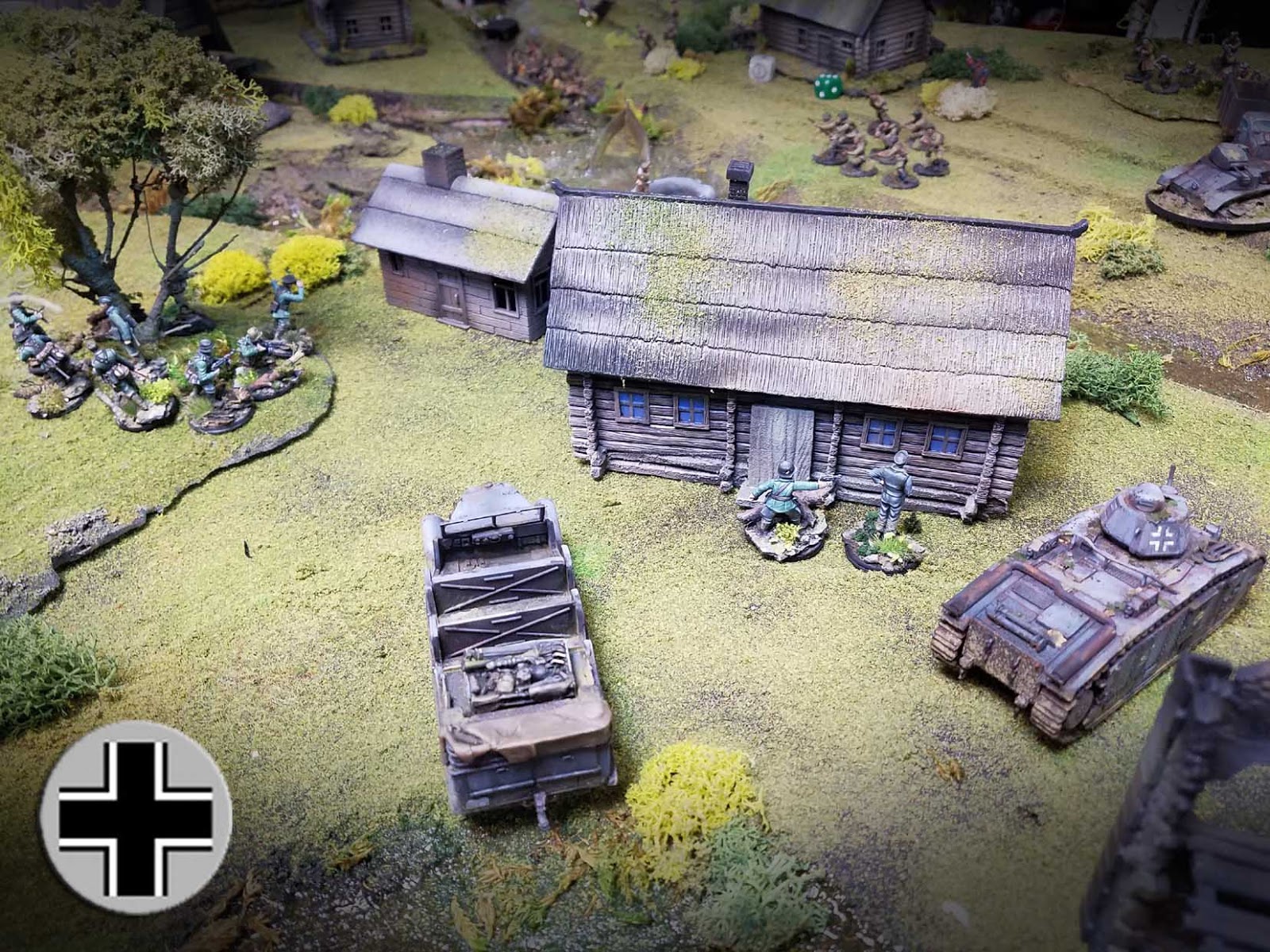 However, the Pioneers were able to utililze their tremendous close range firepower to decimate the raw Soviet recruits!  The last man standing was then taken down by the coaxial machine gun of the Flammpanzer.

Not even Royanovich could save them. 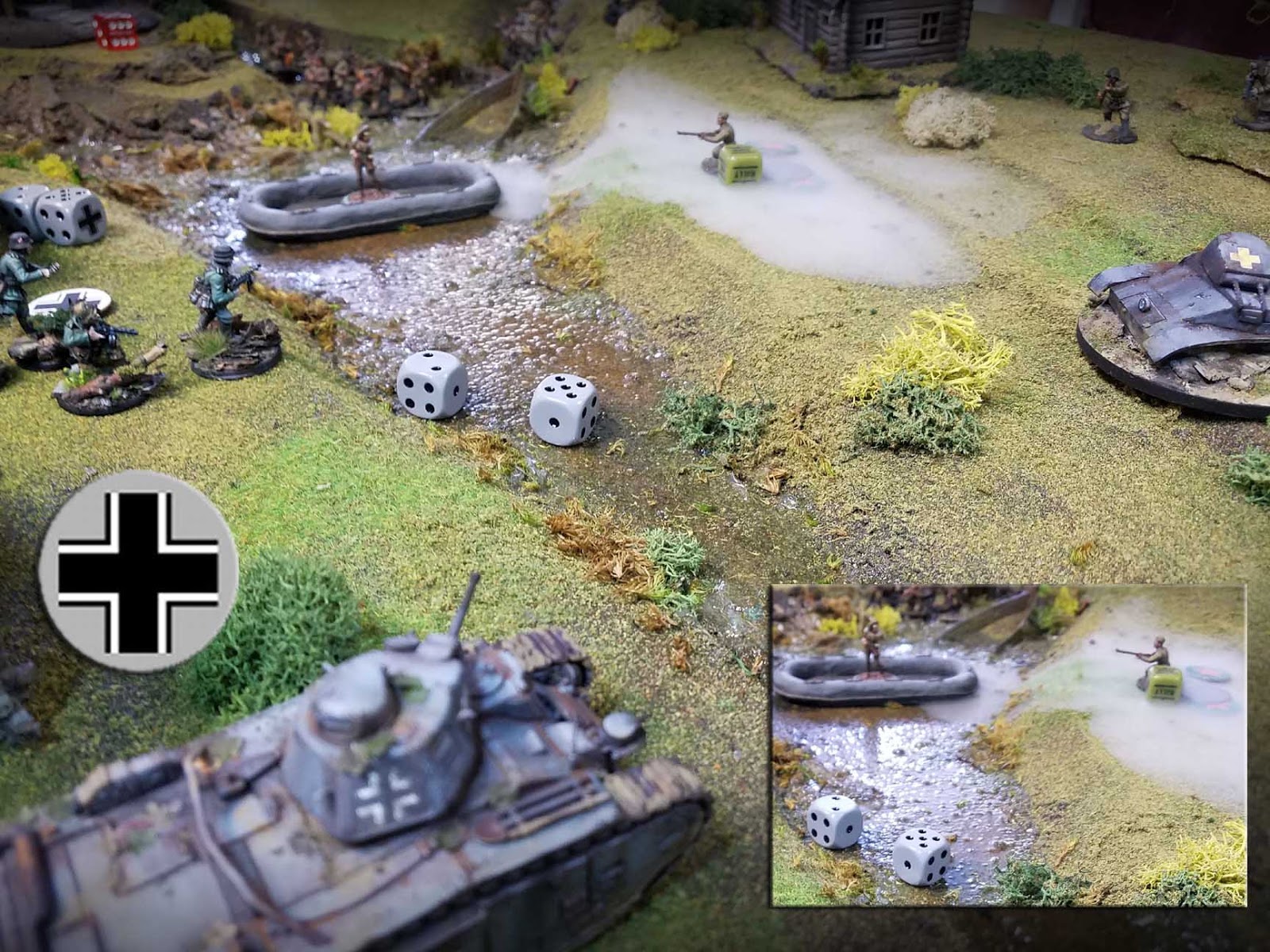 At the same time, the Beast of the East fired a gout of flame at the Opel Blitz, which had now been revealed to be employed by the Siberian Veterans.

The petrol immediately caught fire, and it promptly exploded. 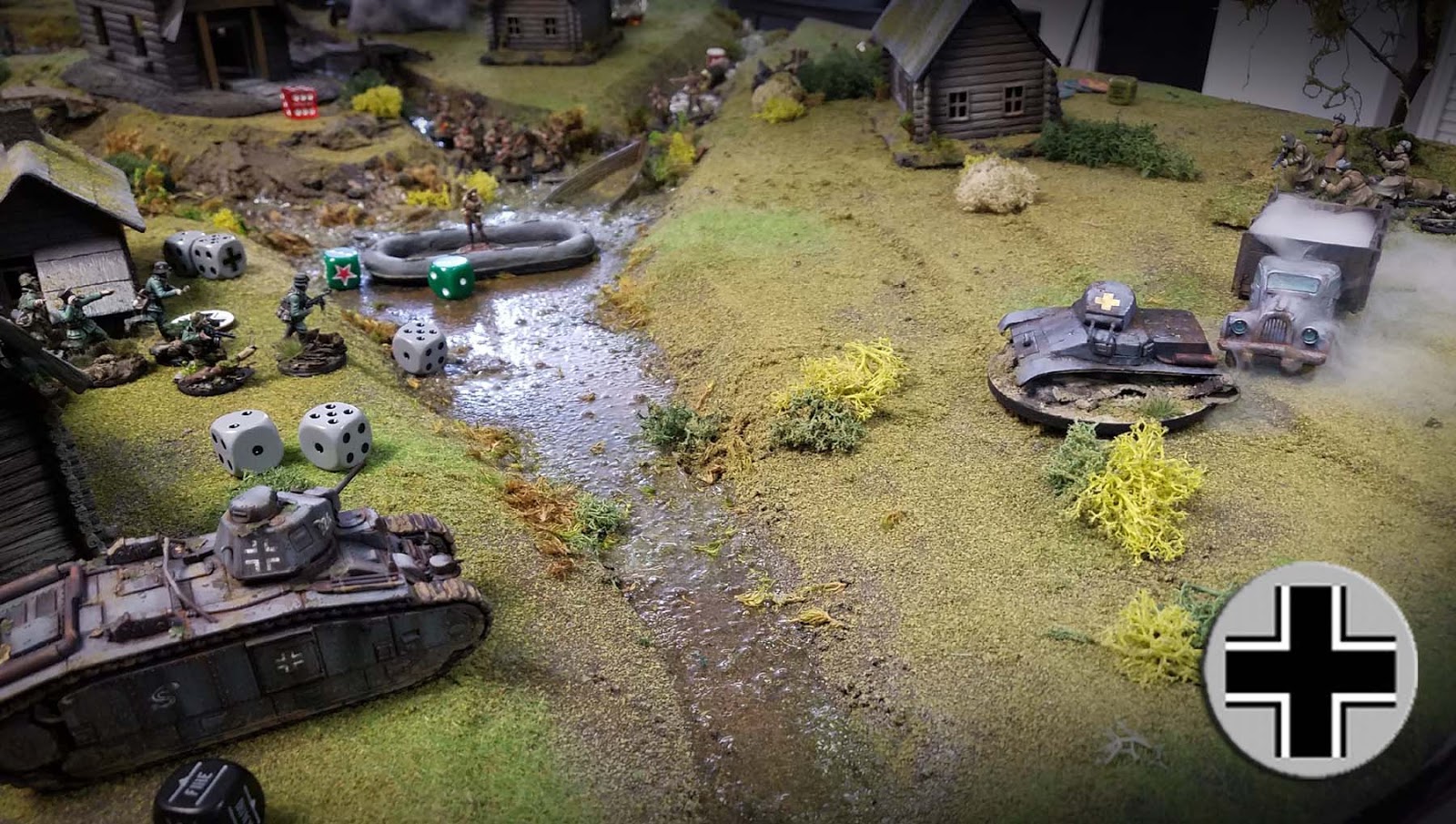 The celebration did not last very long, as the T-34 crew regained their morale and destroyed the Rad 8 on the other side of the river. 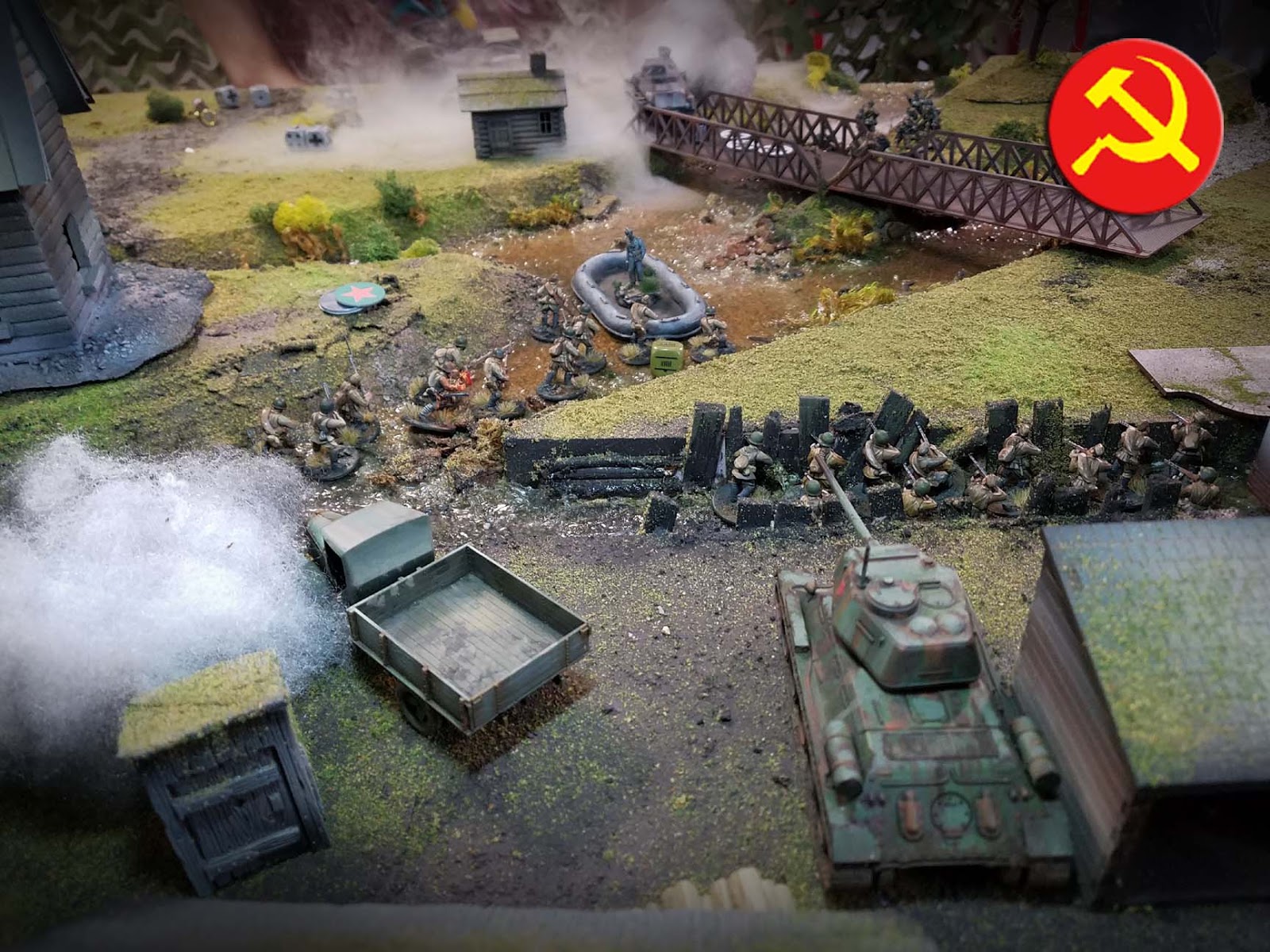 The veteran Heer unit dove out of the cabin and headed into the river, as they saw their comrades huddled in the wreckage of the Panzer 1... 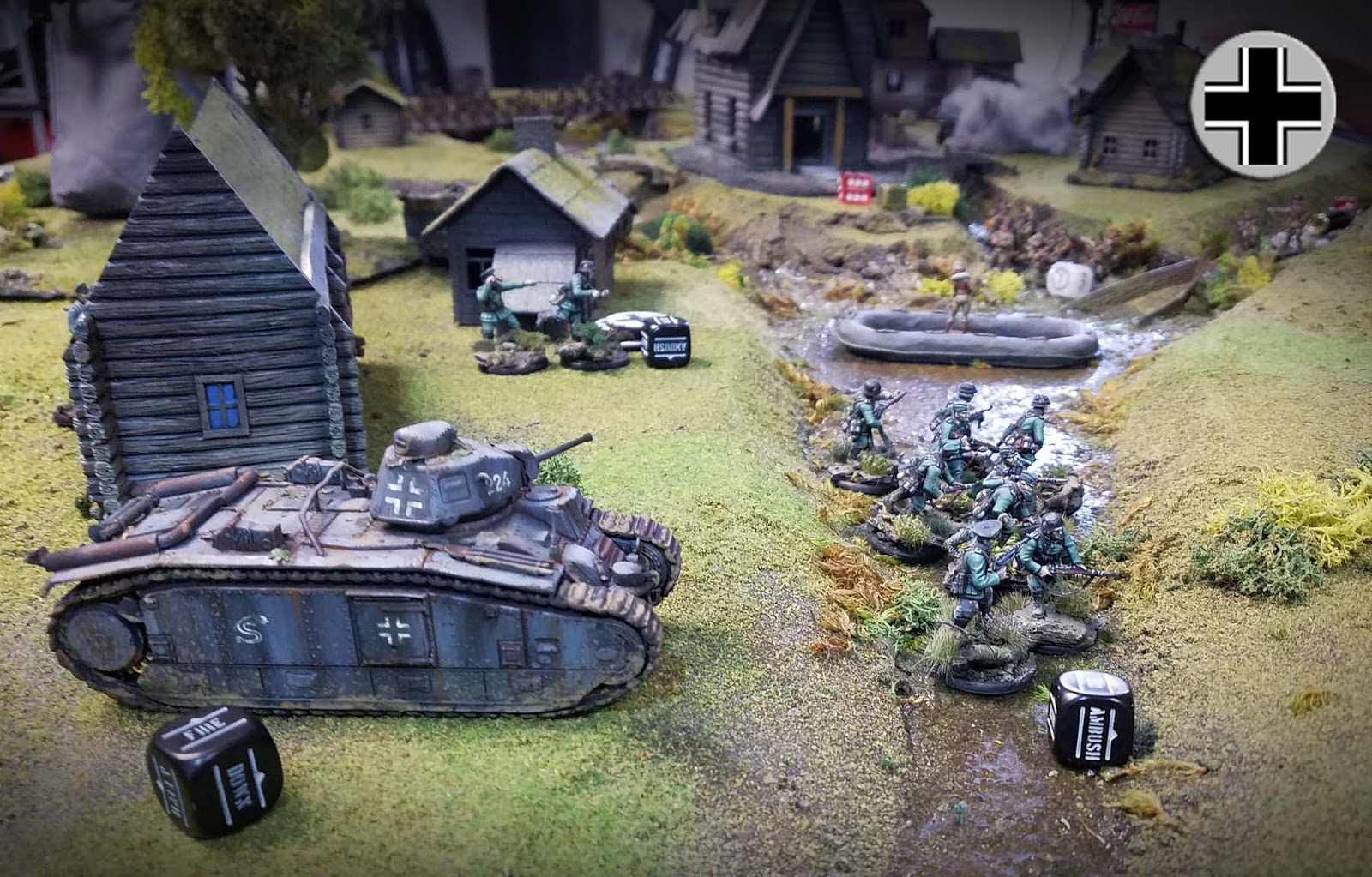 The Soviets attempted to destroy the transport half track with their small arms, but only managed to immobilize it.  This would now act as a shield for the survivors of the Pioneer unit. 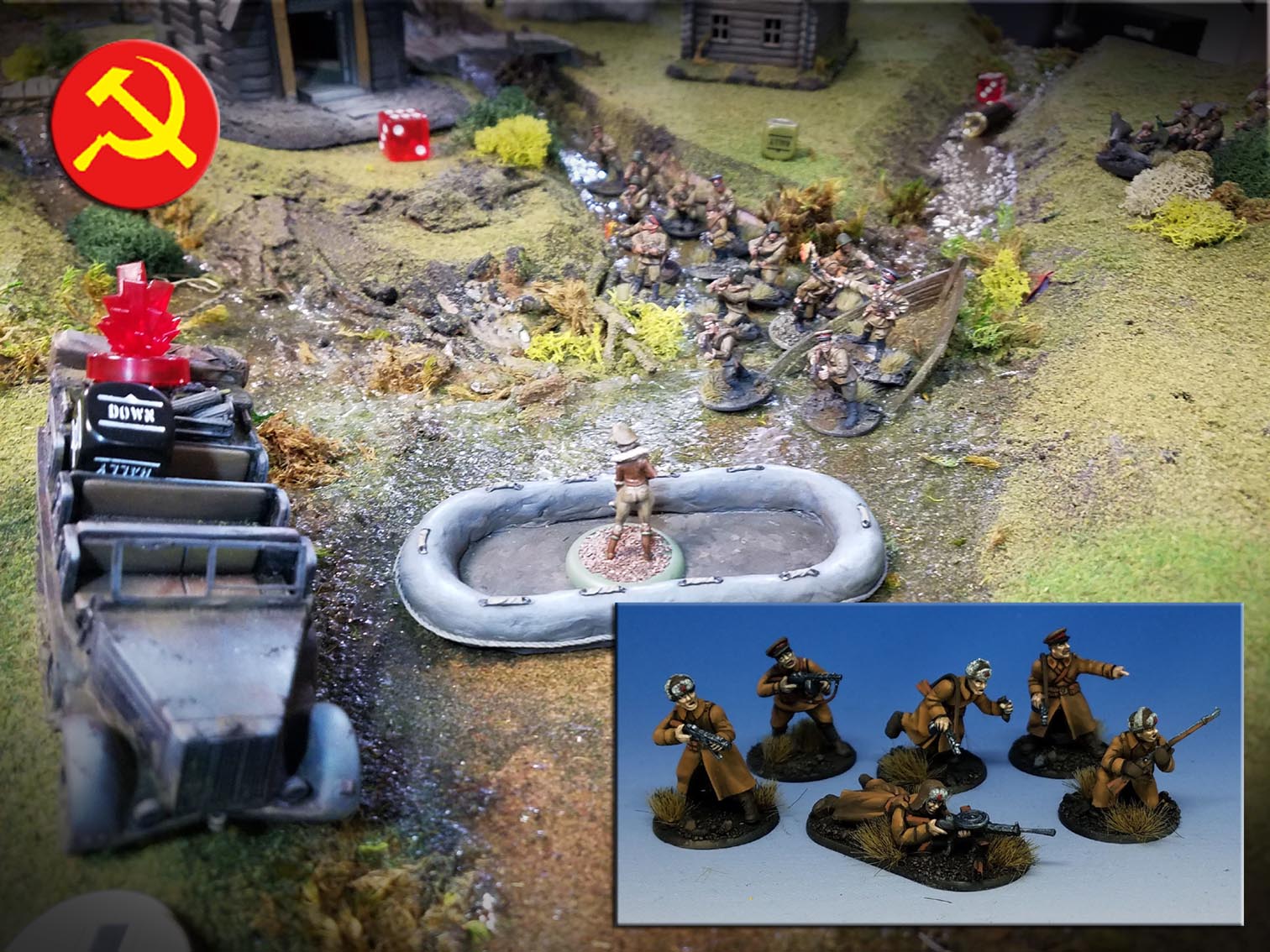 As the German officer was overwhelmed by the Red Hordes in the river, the time lost by the Waffen SS to the destruction of their transport proved too costly.  They could not win the race to the wreck of the Panzer 2. It was now that Comrade Royanovich took matters into  his own hands, and attempted to steal away the objective at the last moment.  His bravery managed to turn the contest into a draw, but did he ultimately survive?

We shall see the next time these bitter enemies meet on the field of combat.  The battle will now shift to a different part of the Soviet Union.  But the carnage certainly shall remain the same! 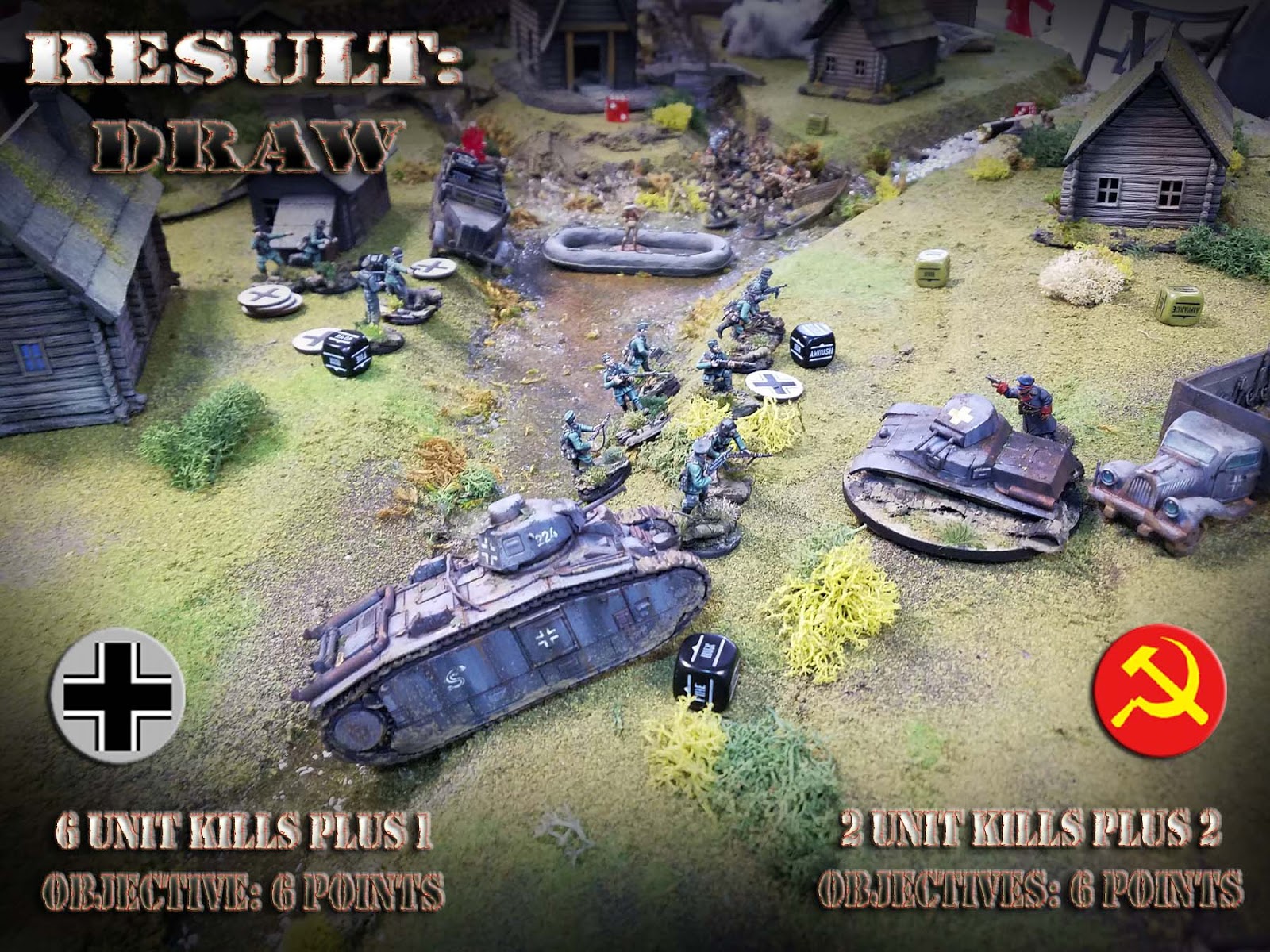