From Concept to Reality: Explore the Painting Pyramid! 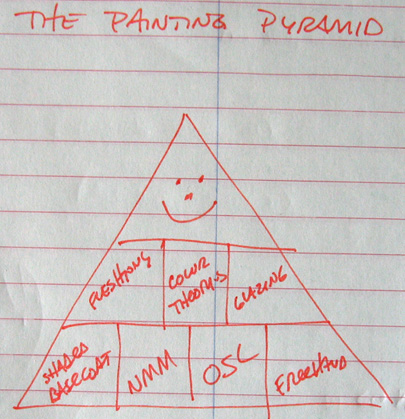 For those of you who saw my blog post from late last night, you heard that I had made some creative inroads into the Kickstarter.  Well, here are some images of that process as it played out yesterday and then today!

I now introduce the Painting Pyramid, something that I came across by accident when I was trying to think of a catchy name for the first four videos, which is also the first "Bundle" that we want to create as a goal.

We learned from our painting seminars that without the Shaded Basecoat DVD, a lot of my other techniques don't make as much sense.  So, that is the very first DVD that will be made and released.

Once you have these first four techniques down, it does make learning the rest a bit easier.  Hence the whole pyramid structure!  I was channelling the old "Food Pyramid" that we all grew up with, obviously. :-)

From that initial concept came this sketch.  This is what we hope to turn into T-shirts as rewards for pledges, etc.  We might even do hats, or other items.  I have already worked up a smaller simplified version of the pyramid for dice! 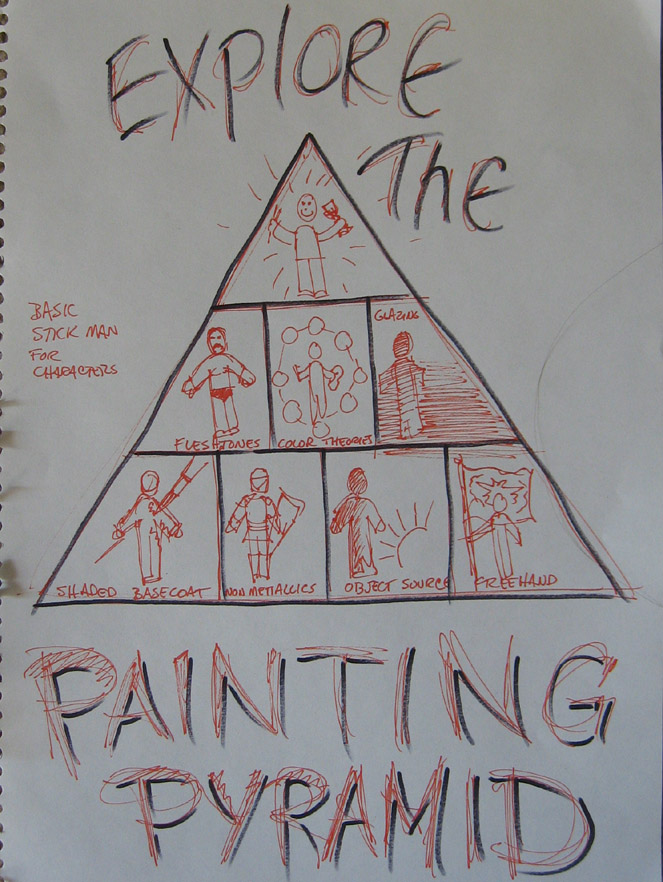 Once the basic idea was solidified, I had to refine all the individual elements into something more polished. 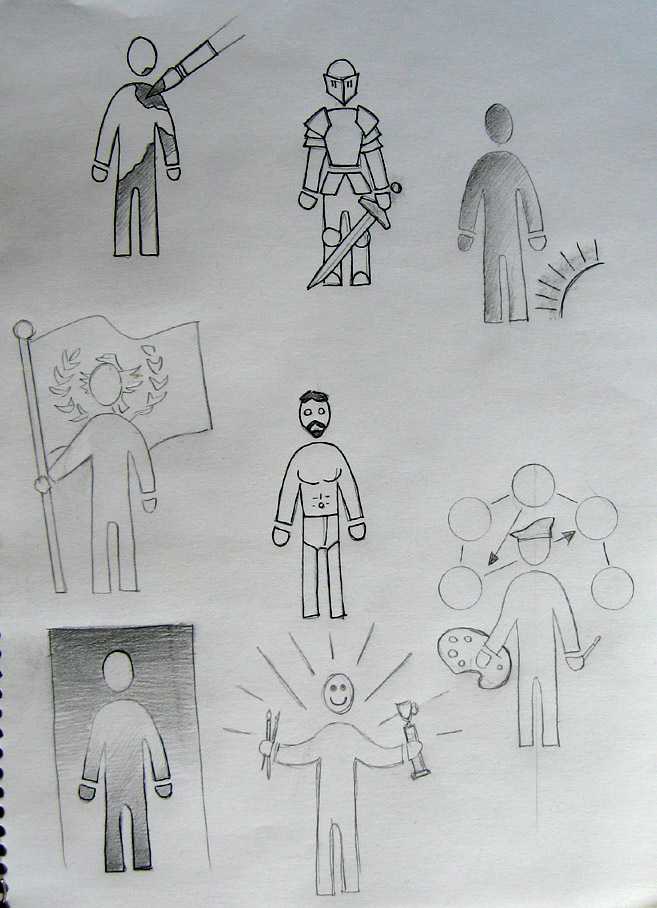 Which eventually led to this!  It will still need to be worked on, but I will need to get my stylus to be able to do that task.  You have no idea how tough it was just to do this image!  It took many hours of struggle with that stupid mouse. 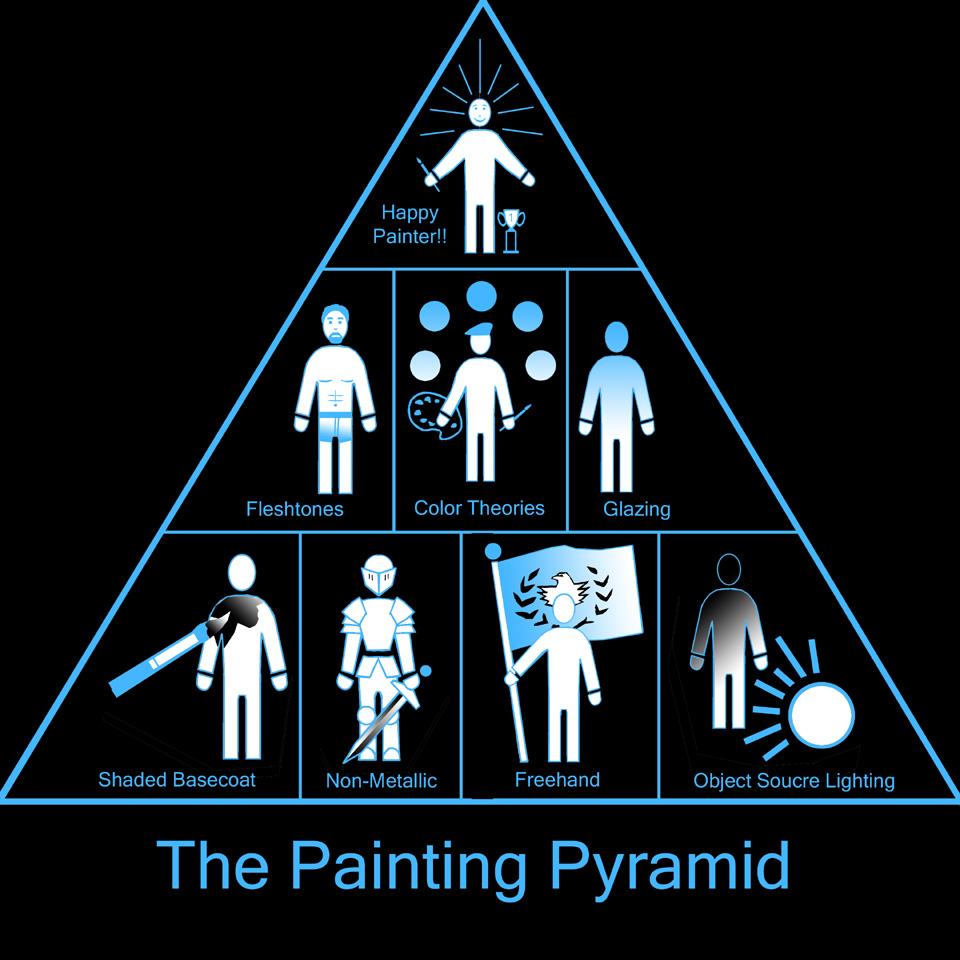 Which brings me to something else I mentioned last night.  It has become apparent to me that I need some more pieces to this puzzle right away in order to make the kickstarter work.  To keep it short, what I would like to do is make a Pre-Kickstarter Beta Test pledge, so that I can bring in enough funds to purchase some sort of editing software.  This would allow me to get working on the videos themselves right away, instead of waiting until after the funding phase of the Kickstarter, which would be late January at the earliest!

For those who do pledge $20 to the Beta Program, you would be getting a copy of the Beta DVD to look at and give me some feedback.  That would be months before the official delivery dates in late April and May.  Once the releases start, a person who contributed $20 to the "Pre start" Beta Program would have their choice of one free DVD title.

Contributors of $30 (or more if you feel like it) would also get a "Beta Tester" version of the Painting Pyramid shirt design shown above.

We are trying to keep this aspect simple for now, hence these two levels.  It might even be limited to a certain number, so that we still have time to actually create the videos! :-)

The idea is to get some kind of rudimentary software in my hands so that I can make the videos much better, and a whole lot faster when it comes time for release dates!!  Also, I think the quality will be much better with all the extra practice.

In addition, Beta Testers will have their names listed in the credits, and as many other places as possible.

This feedback is going to be really important.

If you are not able to contribute in a monetary way, there is still a way to be a Tester.  Using the software purchased with the "Pre Start" funds, I would be able to post small pieces of the videos on the blog.  Anyone with suggestions, or some helpful tidbits will also be listed on the credits.

My contact information... you can e-mail me at jtwart2@aol.com, with a Beta Tester tagline.  Paypal is our method of payment for everything, so once you contact me, I can get you that info.

You can also reach me on facebook at James Wappel!

OK folks, I wish there was more, but we are already late to head out the door.  I will post again when we get back!!!!!

Double dipping can be good... Kickstarter Beta Testing, anyone? 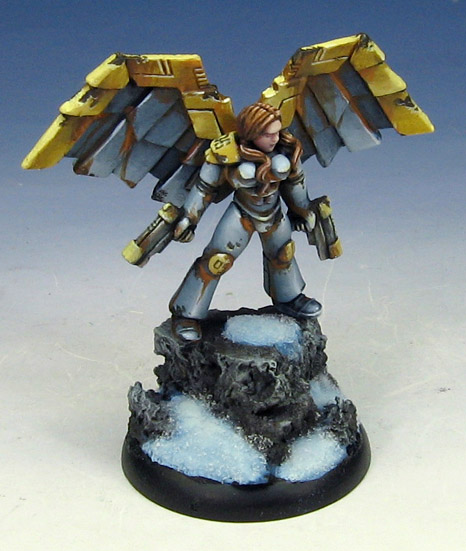 I did this figure to illustrate something that I want to do with the painting DVD's.

Many of you will notice that the color scheme on this former VASA faction miniature resembles a certain chapter of space marines.

Since we are not using any GW figures for our painting DVD's, I didn't want to leave people out in the wilderness who would ask us questions such as "How did you paint that Space Wolf", or "What did you use on that Blood Angel to make that red?"

Where possible, I will try to include figures such as this, where it would be possible for people to extrapolate this color scheme onto something like a Space Wolf.  The colors are all the same... it's simply where you put them that is a bit different! :-) 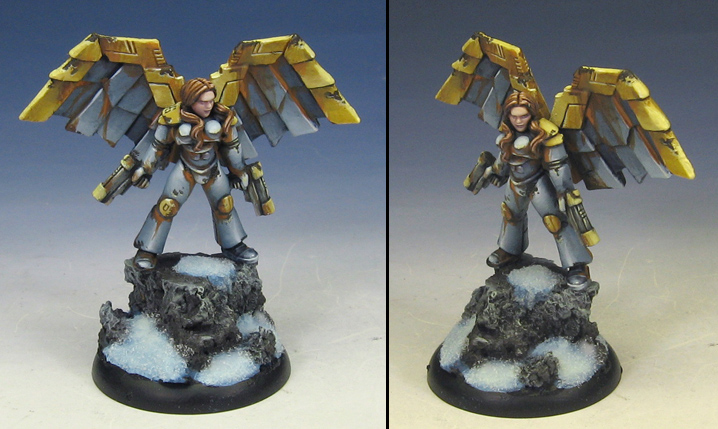 I am really trying to cover all the bases for the upcoming Kickstarter, which is why it has not gone up yet.  However, at some point on Friday (or the wee hours on Saturday) I will be submitting some kind of proposal to Kickstarter.  I will let you know as soon as I know if I get the OK from them! 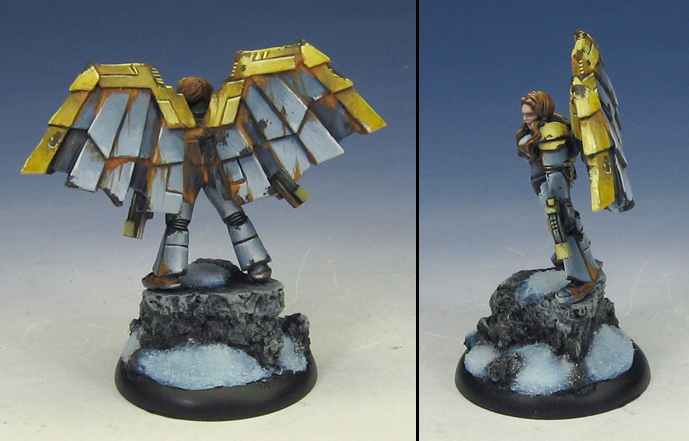 I have been driving myself crazy in this attempt to cover all the bases... to make the perfect Kickstarter right out of the box.  I realize now that this is impossible, since there are far too many unknowns.  Besides, Kickstarters that you see now are very dynamic, with all sorts of updates and extras being added almost daily, if not hourly!

Another thing that has delayed me is the desire to do as much of the video work as possible before I even start this thing.  Again, that sort of runs contrary to the whole purpose!  Kickstarter is supposed to supply me with the tools that I need, not the other way around. 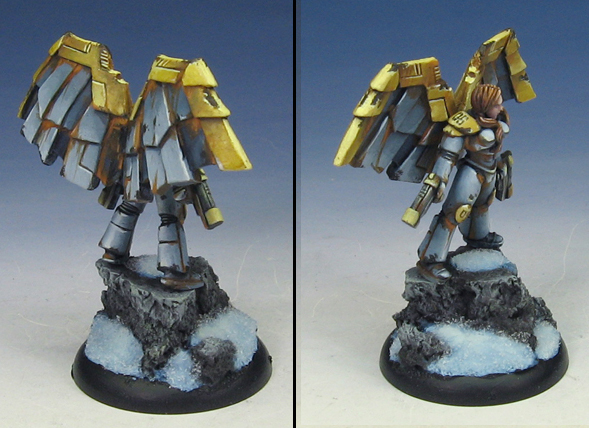 Still, you probably all know by now that I am super obsessive about preparation and training.  I don't want to have to wait until the end of January just to think about getting vital equipment.  It would be much better if I could secure some of it right away, or at least a "tide me over" version of it, so that I could be 100% ready to go when I have the funds to get the 'real' equipment.

This is a very long, rambling way for me to ask all you loyal Wappellians who are interested in this project if any of you would want to participate in a "Beta" version of the DVD's.  Since the earliest practical delivery date on the first DVD's would be in late April, I was wondering if some folks might want to get some earlier versions of certain titles.

The idea is to get enough equipment to put out some test DVD's that could be purchased by interested painters.  You would get to see the DVD's many months before the final ones are released, and your feedback would  help make those final 'end products' much better.

Those who would do this early contribution would get a complimentary final version when those are ready, plus some kind of "I'm a Loyal Wappelllian" or "Beta Wappellian" gift.

If something is going to have my name on it, I want it to be the best darn thing I can make.  Since film making is an entirely new thing for me, it is going to be an arduous quest to make sure the final product helps people as much as our in person classes have done.. 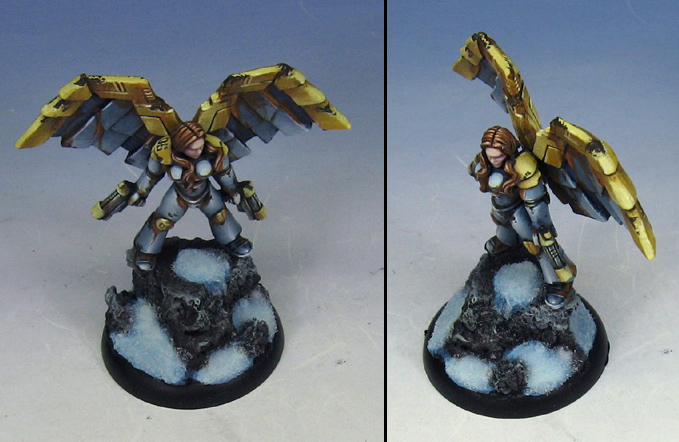 So, Tomorrow I am going to try and do a post that will give contact information for me, although you can always reach me on facebook.. James Wappel.

Should you want to be a Beta Tester for this project, and help me blast through this initial wall, I will try to make it worth your while.  I was even thinking of putting early contributors names on the credits, or some kind of "special thanks".  Jon and Marty have already earned theirs!

I really want this to reach its potential.  Right now, I am getting a bit frustrated by these initial limitations.  Even now, I am starting at a half finished orc warboss from Raging Heroes that is the first video.  I shot the initial basecoating part, and now I have to do the rest of the shading, tinting, etc.
To turn him into something I can work with in terms of actual film, I need a few more items. 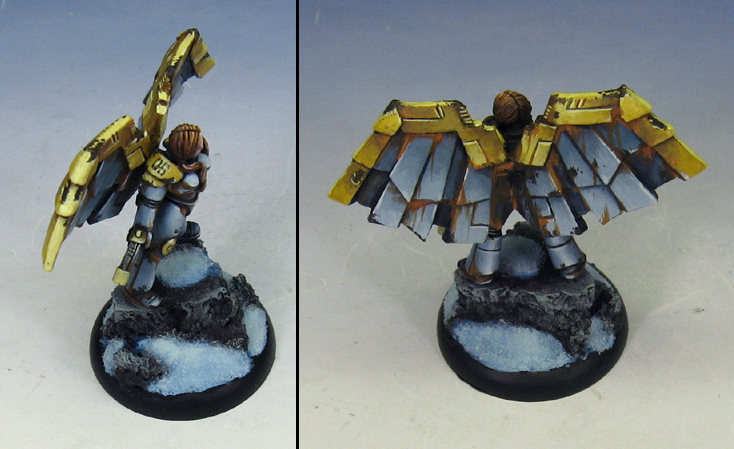