The Cart Before the Horse 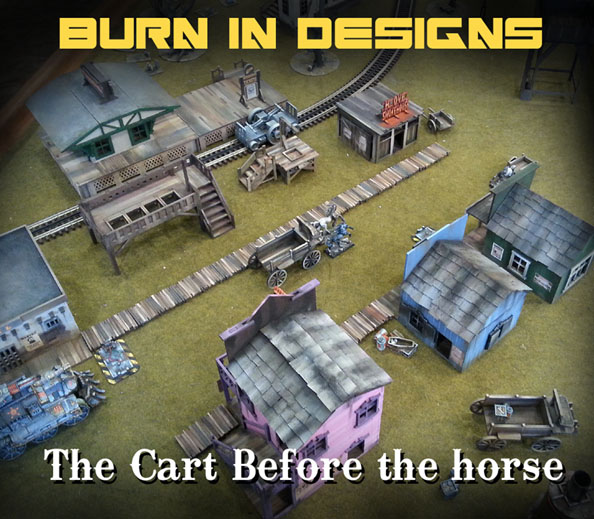 The Pink Flamingo joins the rest of the town of Wappelville!

I thought I would snap a few images of what the town looks like at this point, since it's about to get a lot bigger! 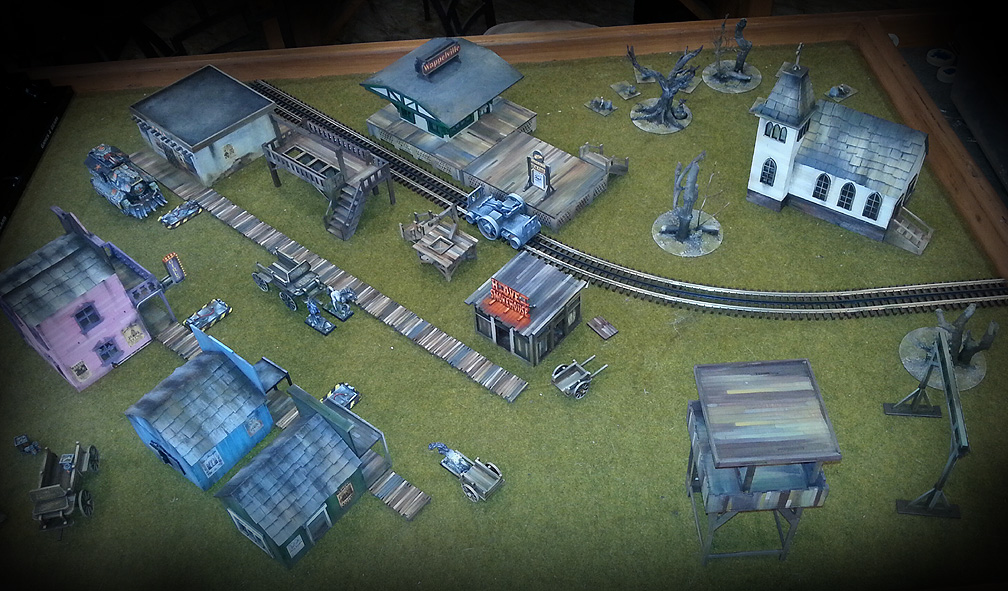 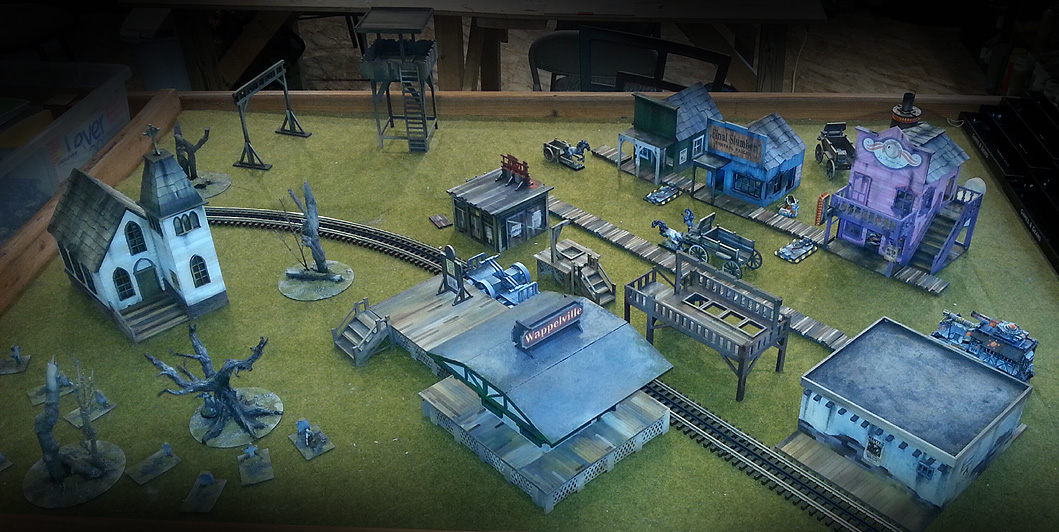 As we look down the road to the future of Wappelville, one of the first things to be added are all the new boardwalk lengths and matching sign/light posts which are emerging now on the Burn In Designs site. 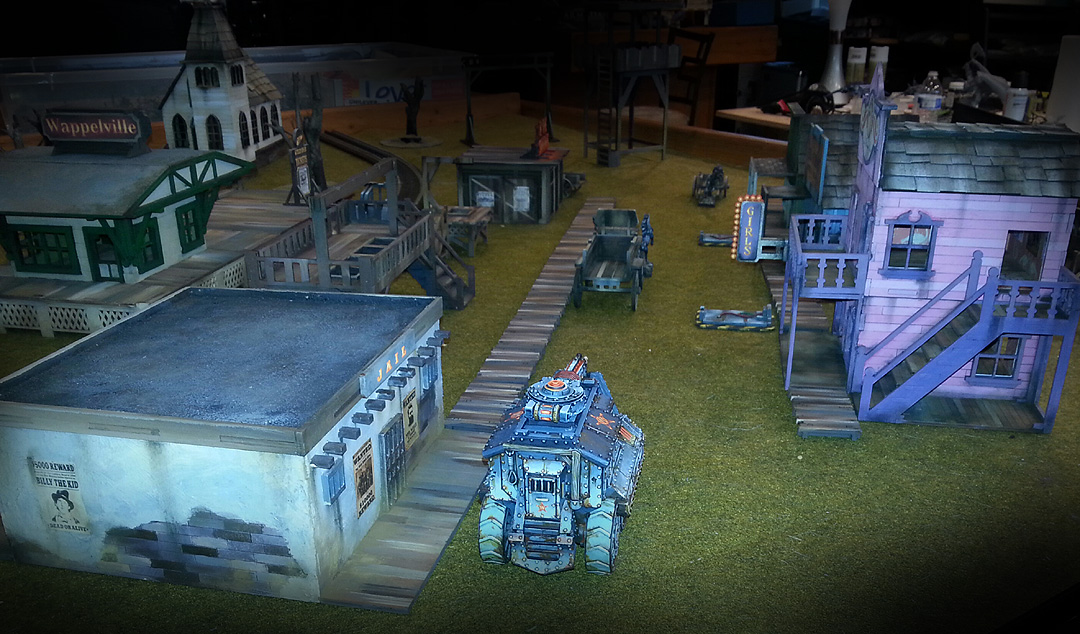 The additional boardwalk lengths should double the total for the town.  This will be important, since we came up with the house rule about starting and ending your movement on the boardwalks.  It adds to your quickness if you do so. 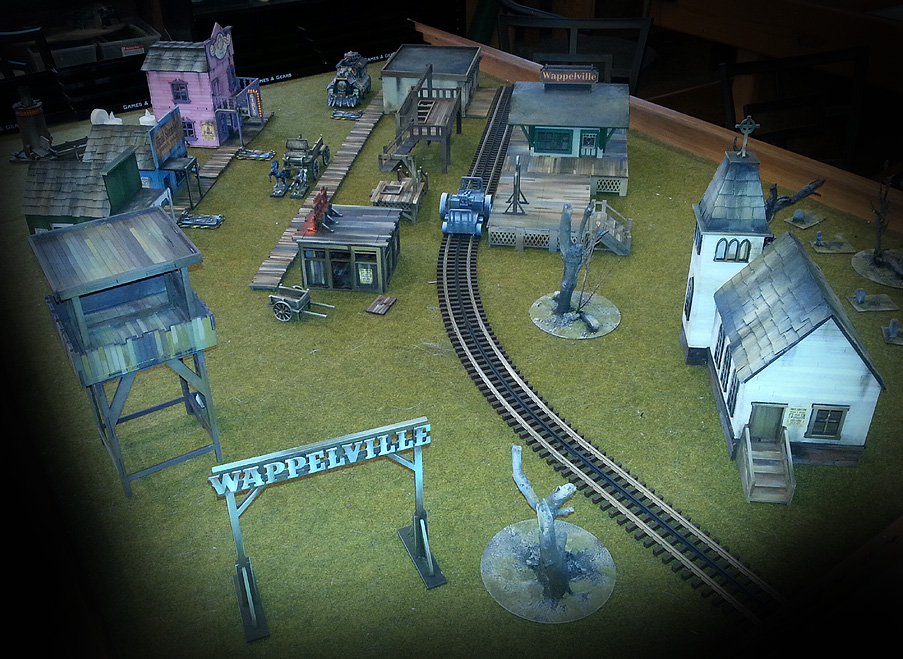 We have not utilized that rule very much, since we haven't been able to cover the whole town.  In fairness to one side or the other, we made sure those boardwalks were far away from any deployment zones. 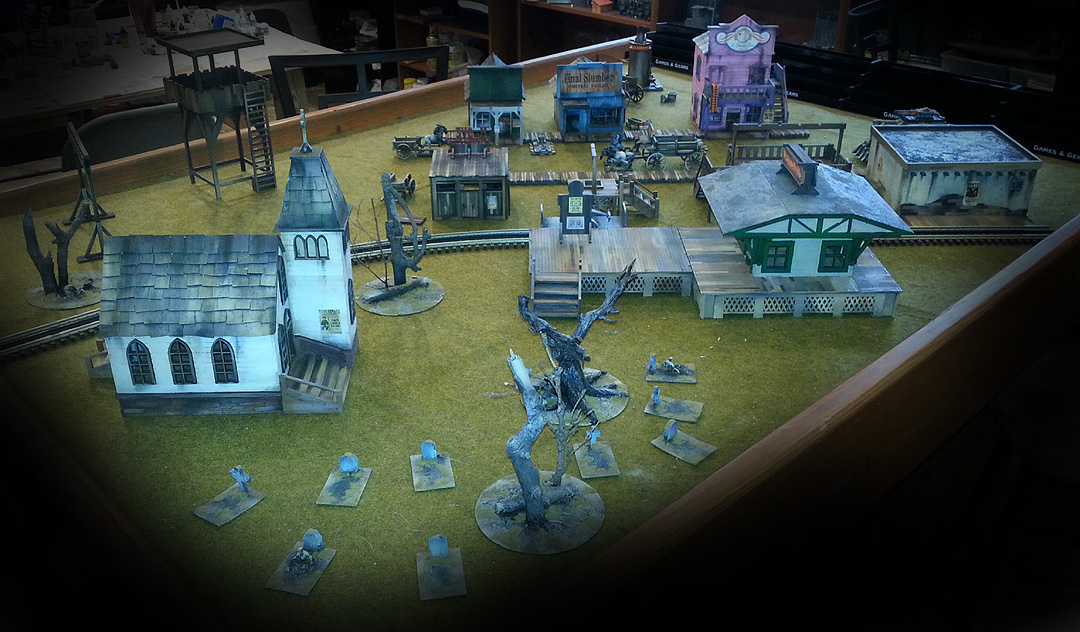 In addition, it's very hazardous to move across those walks right now, since you are always left out in the open.  If there are lamp posts and sign posts to be found at regular intervals, it will make a huge difference in survival!! 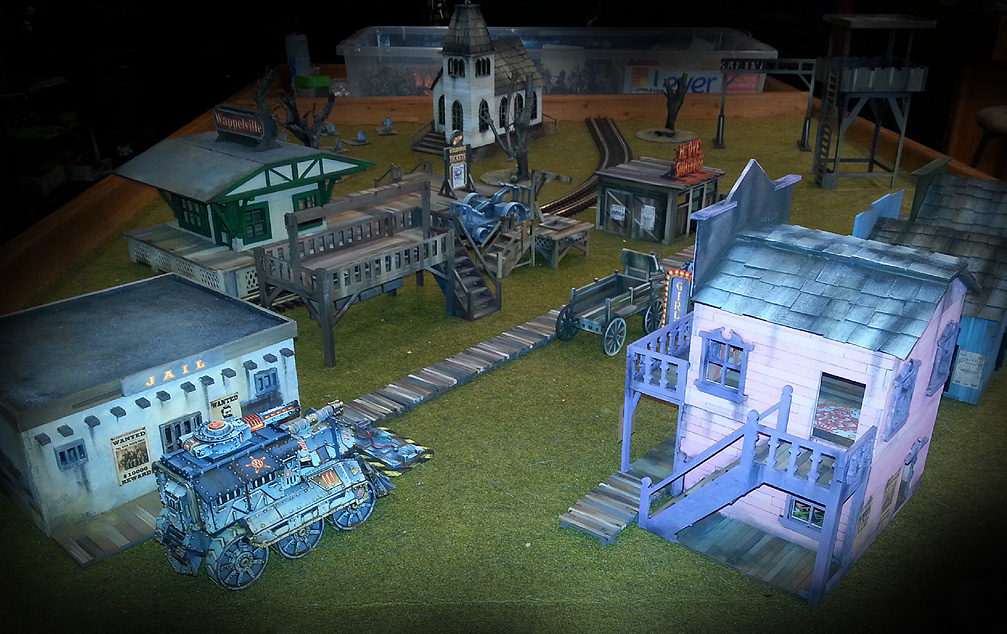 For instance, If you can reach one of those posts with an action to spare, you can take cover, which will add at least a +2, or even a +3, to that roll to shoot at you.  That can translate into needing a 8, 9, or 10 to hit. 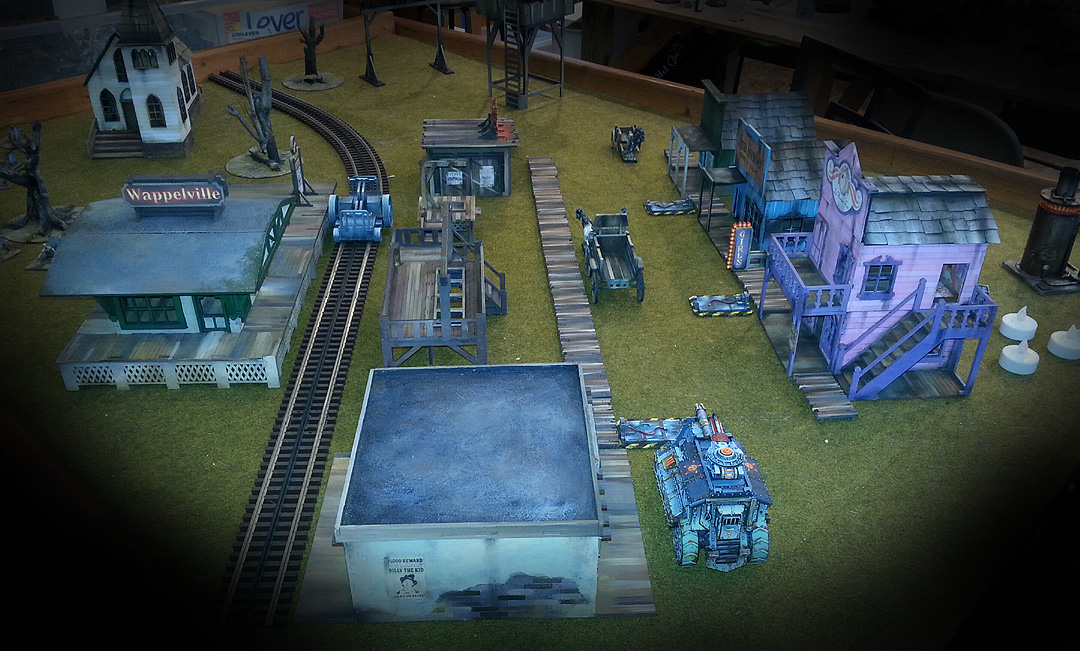 We think that will help out standard hired hand infantry, and also facilitate more close combat, as we had in a recent test fight.

All shooting battles get boring in a hurry.  When at least a portion of it is a knock down brawl, things get interesting.

Since Wild West Exodus has all those variations in close combat halos, weapons and other abilities, there are a lot more decisions to make.

The Wooster Sisters and their little pets! 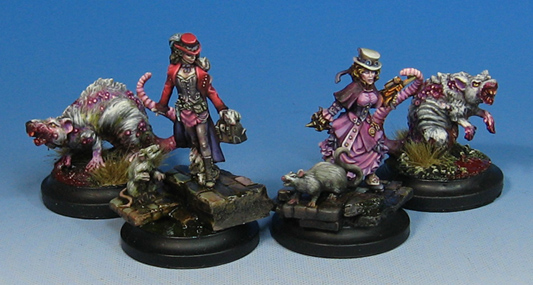 At least, the big rats join their owners!  Betty and Lilly Wooster will now have some company when they toddle around Wappelville.

All of the rats are Reaper BONES minis, while the two sisters are traditional metal Reaper figures.

They will be civilians and character doubles in the Wild West Exodus universe.

The giant rats will be easier to distinguish on the table from the Lawmen CCK9 doggies.  It was a problem we started to identify early on, since so many factions can use the dogs.

The daughters of the Honorable Bertram Wooster  have certainly irritated the family Valet, Jeeves, as their 'pets' tend to leave behind quite an ugly mess.

More than once these rather monstrous creatures have been blamed for the sudden disappearance of dogs and small children. 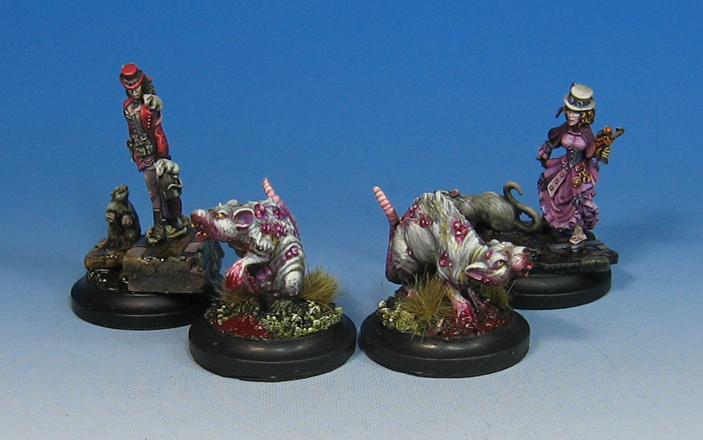 However, nobody wishes to accuse the powerful politician and owner of the Final Slumber Funeral Parlor of any sort of misdeeds!  Stay tuned to watch the exploits of the Wooster girls... 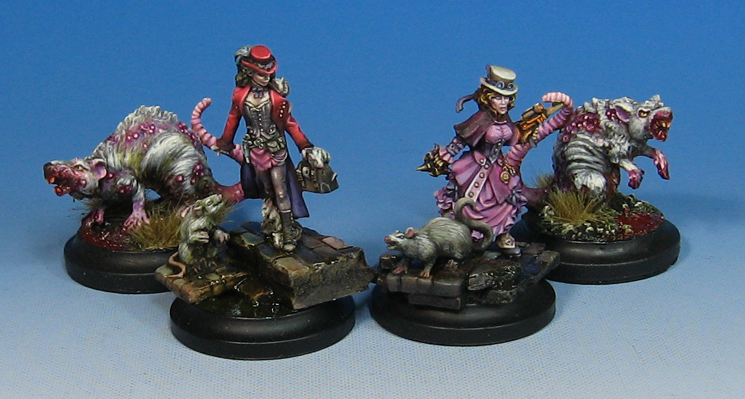 Posted by wappellious at 9:58 AM 6 comments: