Here is a bit of a 'reintroduction' for me to many of the folks who are newer to the blog, and not quite familiar with the very unusual path I took to get into this miniature painting thing... which Cathy assured me from the beginning would be very addictive!

I have been painting miniatures since 2001, when Cathy and I had some fun painting Blood Bowl minis at the kitchen table, using our standard 2D acrylic paint...

My original training was in Illustration (watercolors and pastels as a primary medium) and computer graphics. For 11 years, I sold sci-fi and fantasy artwork at convention art shows, Ren Faires, and Celtic Fests. By 2001 I had considered painting Blood Bowl miniatures for the other coaches in my league during those times when there were no art shows. I had a lot of fun painting each team with various themes, even building stadiums for them to play in.

This extra work became far more important in 2001 as the 2D art industry began to collapse rapidly, due to several factors. By 2002, I was branching out to more than just Blood Bowl minis. A hobby store near us sold Reaper and GW figures, so I tried those out, and enjoyed them.

In 2003, I was introduced to sites such as Coolminiornot, which was a major shift for me. There were so many tutorials, so many incredible miniatures with elaborate basing, etc., and seeing them all in one place brought about a huge change in the way I approached my own miniatures. It was here that I heard about NMM (non-metallic metals) for the first time.

Techniques such as NMM and SE-NMM were pretty natural for me, coming from an illustration background, where there are no such things as metallic paints! Also, using more of a watercolor mentality made a significant difference in both the appearance of my miniatures, and the time needed to paint them. Eventually I began to treat all of my miniatures as if they were 3D paintings, simply wrapping the image around the figure. This created more dramatic lighting and shading, and more realistic applications of colors and color temperatures.

In 2006, I started going to the Chicago Battle Bunker, where I joined the Blood Bowl league. Within a year, I started to play 40k, with my first army as Demonhunters! Soon after in 2007 I was invited to teach miniature painting classes at Adepticon. It was an amazing experience, walking through the tournament rooms seeing dozens of wonderfully painted armies on fantastic army boards. It was an inspiration, and I have been an instructor at Adepticon ever since.

I also participated in my first Games Day that year, winning a Gold (40k squad) , Silver (WFB regiment)and Bronze (vehicle/monster). I have been fortunate to win several more Demons, as well as numerous Rogue Demons at Adepticon, over the years.

However, my favorite award of all time was the North American Armies on Parade trophy from 2012! I used my much beloved Lizardman army, with all sorts of scratch sculpted and massively converted miniatures which sat on top of a Lizardman Pyramid (it is featured in the February White Dwarf). Perhaps it is due to my introduction to miniature painting through Blood Bowl teams, but I prefer painting whole armies such as the Lizardmen far more than isolated figures here and there. I guess if you are looking to define me, and what my mini painting is all about, it would be creating armies with unique appearances and themes! I try to balance these ideas of theme with army playability for tournaments, but it usually requires having less than optimal lists in order to make the theme come together. This also gives me the chance to scratch sculpt and convert things.

I have been painting commission figures for the most part over the last 10 years. I have painted 3 Demonhunter armies, 2 Blood Angels, 2 World Eaters, an Imperial Fists, Ultramarine, Dark Eldar and an Eldar army. Also, I have painted a Lizardman WFB army, along with the Tzeentch tainted Tomb Kings, and an Empire army.  Most of the Dark age figures you see on Coolminiornot were painted by me, as well as the vast majority of Gamezone figures.

At this very moment, I am furiously preparing 3 armies for Adepticon... Grey Knights, Tomb Kings, and a Chaos Dwarf team army. Keep an eye on the blog as I begin to post the pictures in the lead up to the Con!! Once Adepticon is over, I have 2 LOTR armies to paint, as well as getting back into my Dark Eldar jetbike force. All of it will be tracked on the blog every step of the way.

This set of images shows some of the figures which were included in my Golden Demon winning Grey Knight squad from 2012. It was a nice bookend to the very first 40k squad I entered and won with five years earlier. :-)

This Grand Master conversion was an interesting project, and a bit of a departure for me, if you look at most of the other Grey Knight conversions I have done. 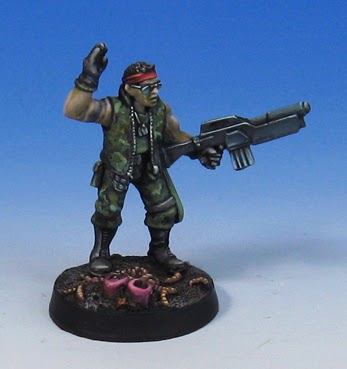 Here's a blast from the past.  I still have a bunch of these old Viridians from the old days of Void. Obviously, plenty of homage to Catachans :-)

Always fun to paint these.  More so now than back in the day when I was just learning how to paint.

The base, by the way, is from Secret Weapon.  That set certainly works well with the theme!