The final conclusions... testing for 6th and Adepticon 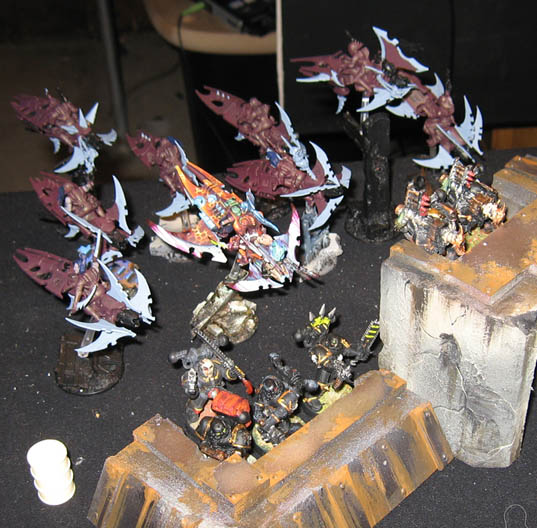 When we last left our intrepid Dark Eldar, they had chosen to take advantage of the Night Fighting in the first turn by deploying everything to start the game.

As you saw, they had hustled over to the right side of the board, where some objectives were waiting.  On their left side, however, waited an awful lot of tough CSM units, including the Forgefiend. 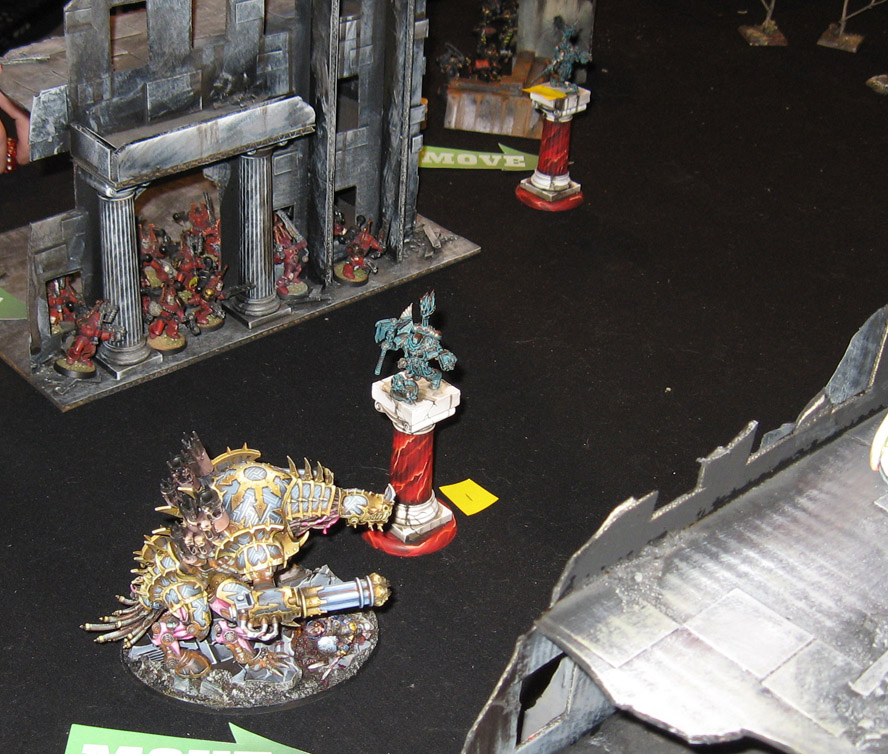 On the first turn, I managed to roll nothing but 1's for all the enhanced cover saves, which rendered  the Cronos useless (again) and almost brought down the raider with the Grotesques.  I am starting to realize that against any sort of space marine armies, as much as possible stays off the board, and whatever is on will just hide as much as possible. 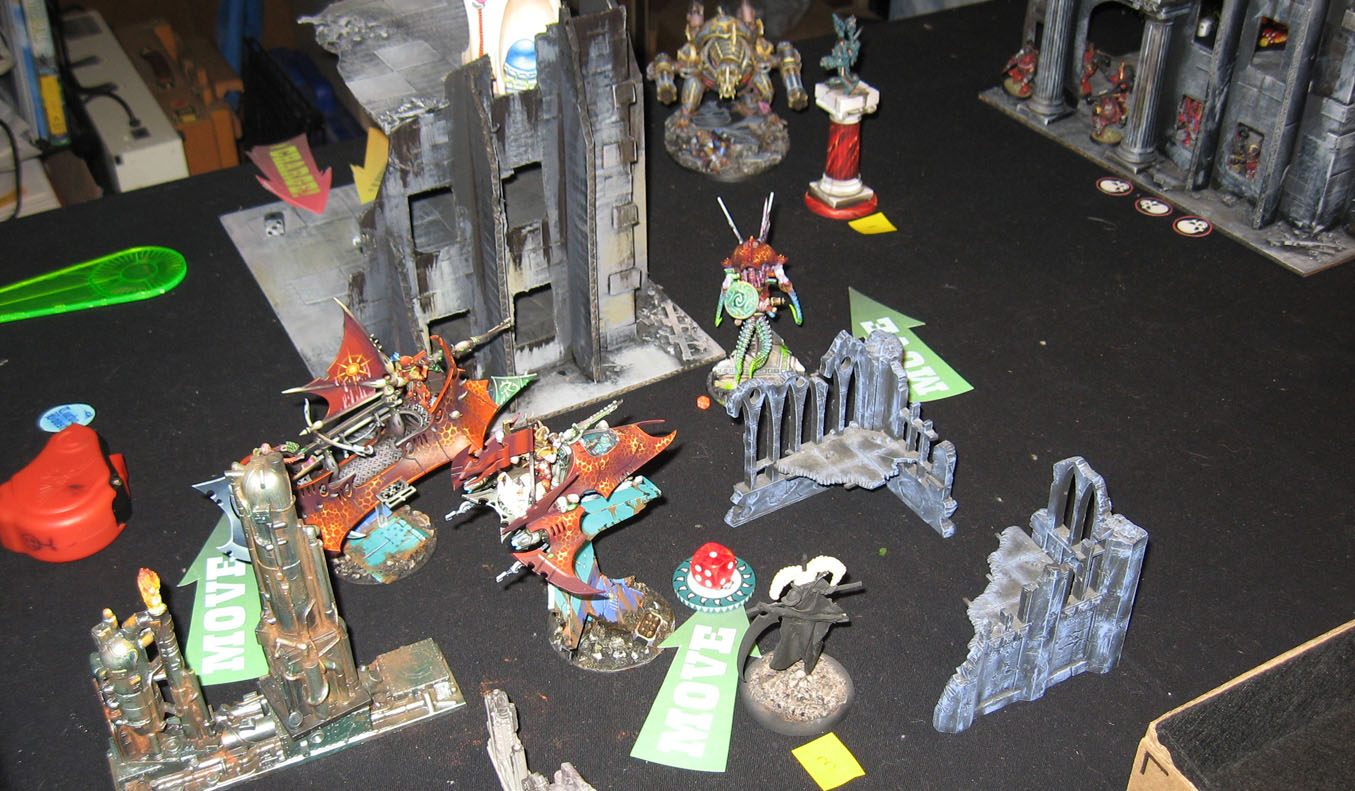 The jetbikes were safe over here for now, since they had turbo boosted, and they were in cover.  However, the dreaded Hell Drake was yet to arrive, as were 2 other units of Khorne CSM's. 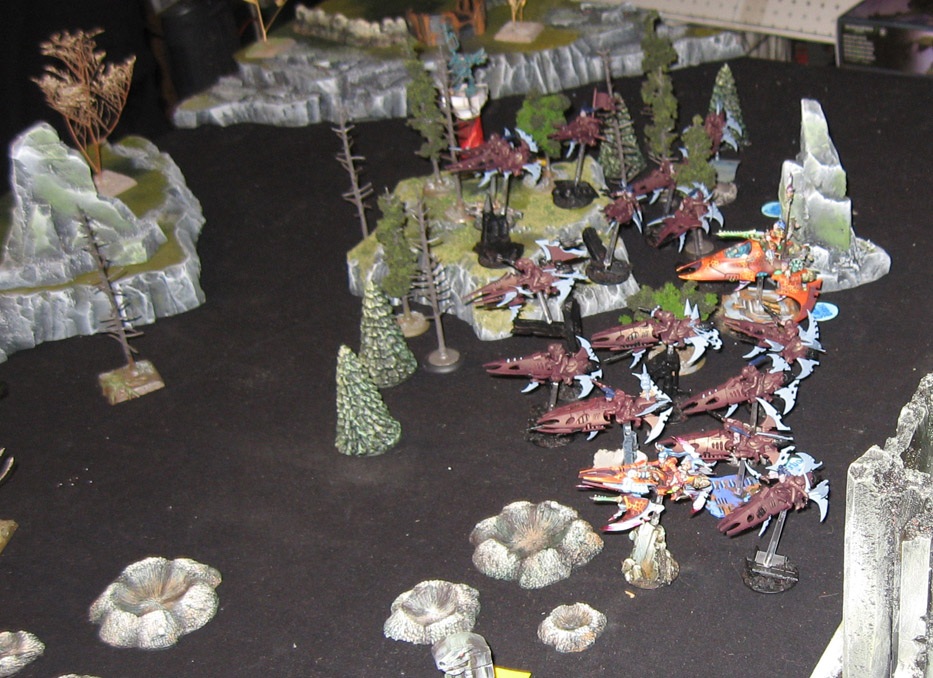 This was the 'high point' for the Dark Eldar, as they killed a lone obliterator, and a few space marines.  Unfortunately, I had to mover everything I had to shoot at them into relatively open spaces, and that would make things ugly.

A Venom failed its save and crashed to the ground, killing 4 of the 5 Wyches inside.  The Cronos was shot down as well.

Both of the fliers showed up, so I knew that it was either now or never.  With the fly over capacity of the Hell Drake, I knew I was going to lose one of the vehicles.

In desperation, I tried to get the Archon's unit into the main unit of Khorne marines.  The spacing did not work out too well, and that was not the only thing.  The shooting by the Razorwing only killed a few marines, and dozens of other shots also did nothing.  So, they would be facing a mostly intact squad, even though half the army shot at them. 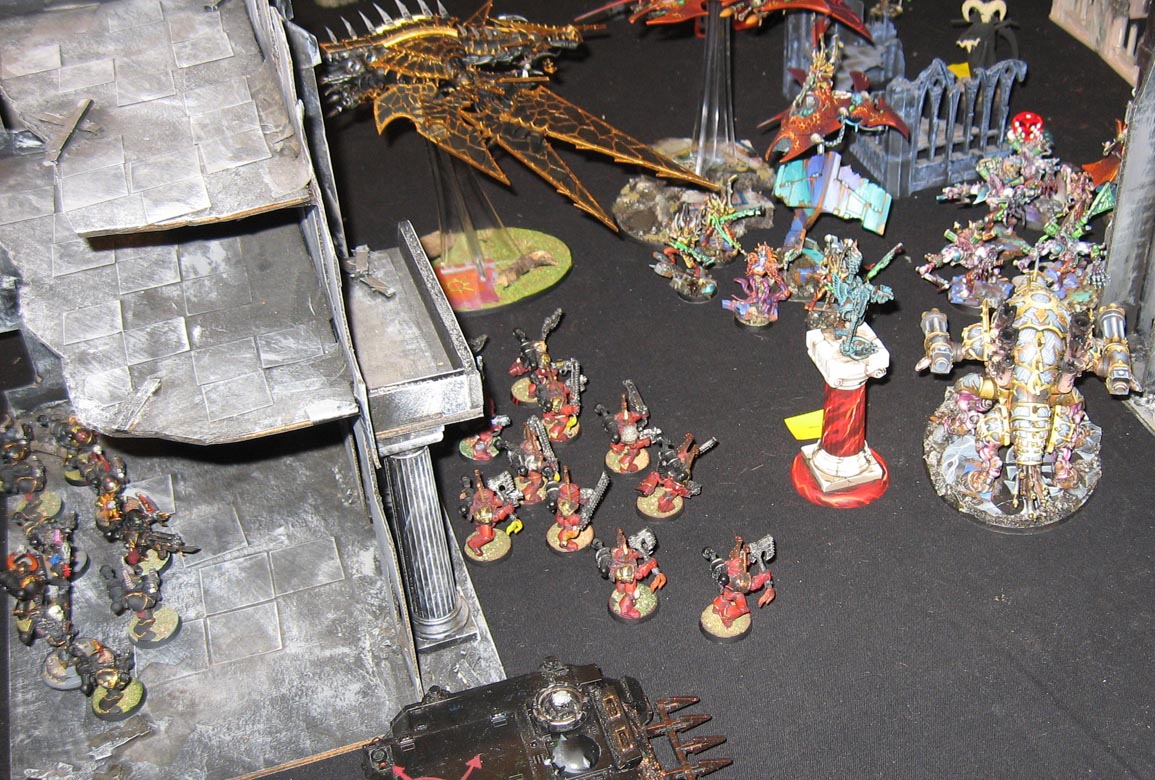 As you can see, many more CSM's were waiting behind the first squad, so this gambit was going to fail big time.  The Grotesques could not make the charge distance to that squad of Khorne marines, which meant disaster was imminent. 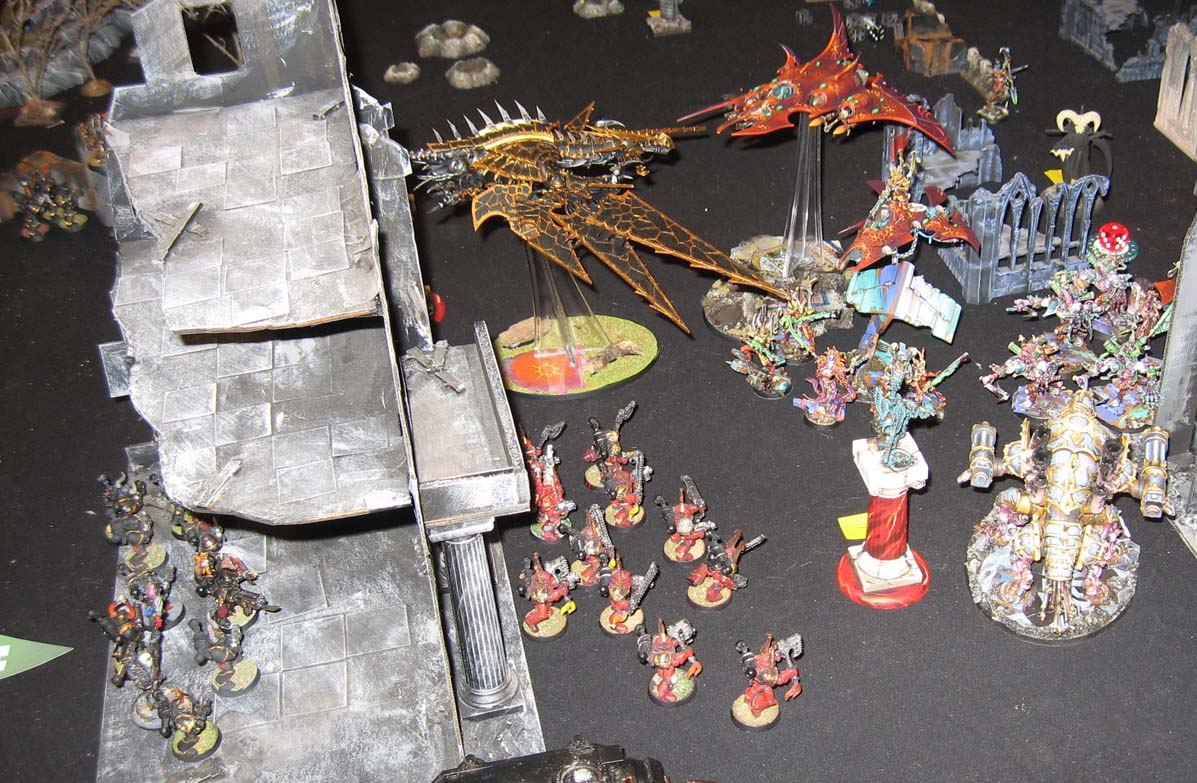 As expected, the Archon and the Incubi were completely wiped out.  I issued a challenge with Asharah, which was bypassed by Kharn, and taken by the unit champ instead.  Free to do what he wanted, Kharn killed all the Incubi by himself with no problem. 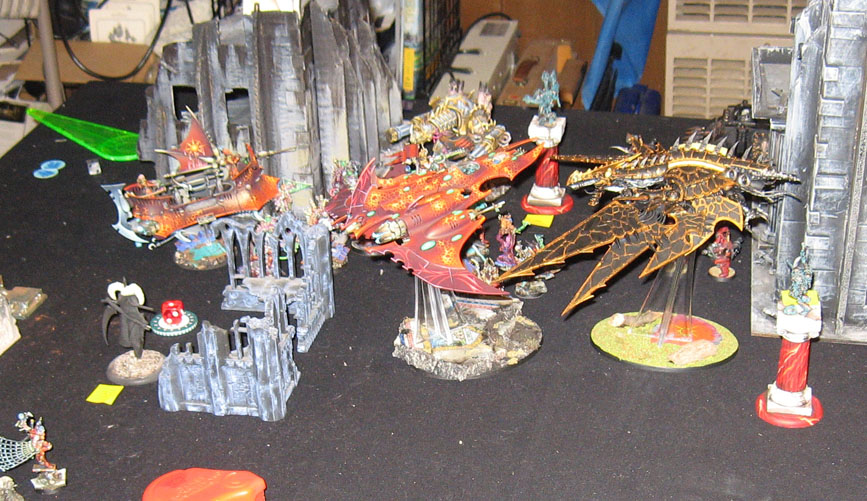 The next turn, the Hell Drake flew over the Razorwing, blowing it up.  The Grotesques were wiped out by shooting and assaults by the main Khorne squad and Kharn.  The Fiend shot down the Grotesque's Raider. 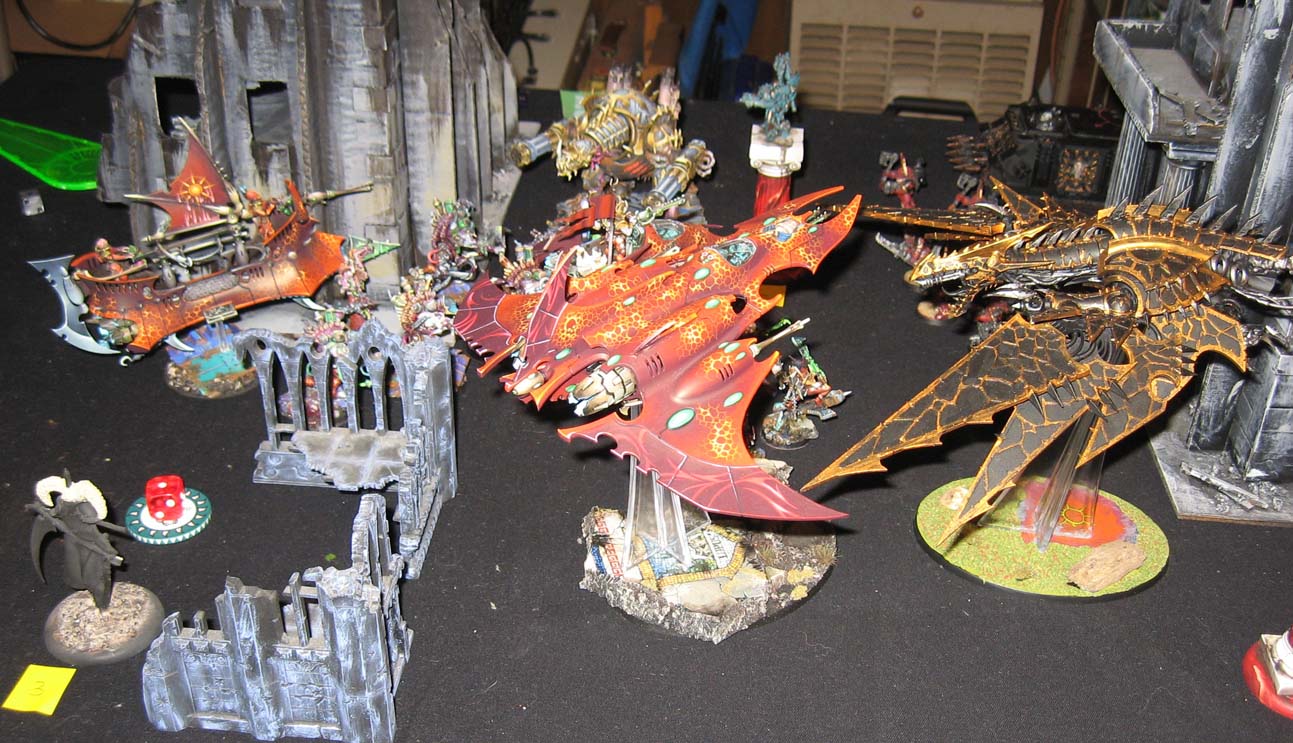 With things looking very bleak on the left, my hope was that the big jetbike squad could cut down the squad of space marines in the fortress.  This might have caused the big units of Khorne marines to head in that direction, since there was an objective worth 4 points sitting there, and the Jetbikes counted as a scoring unit in this scenario. 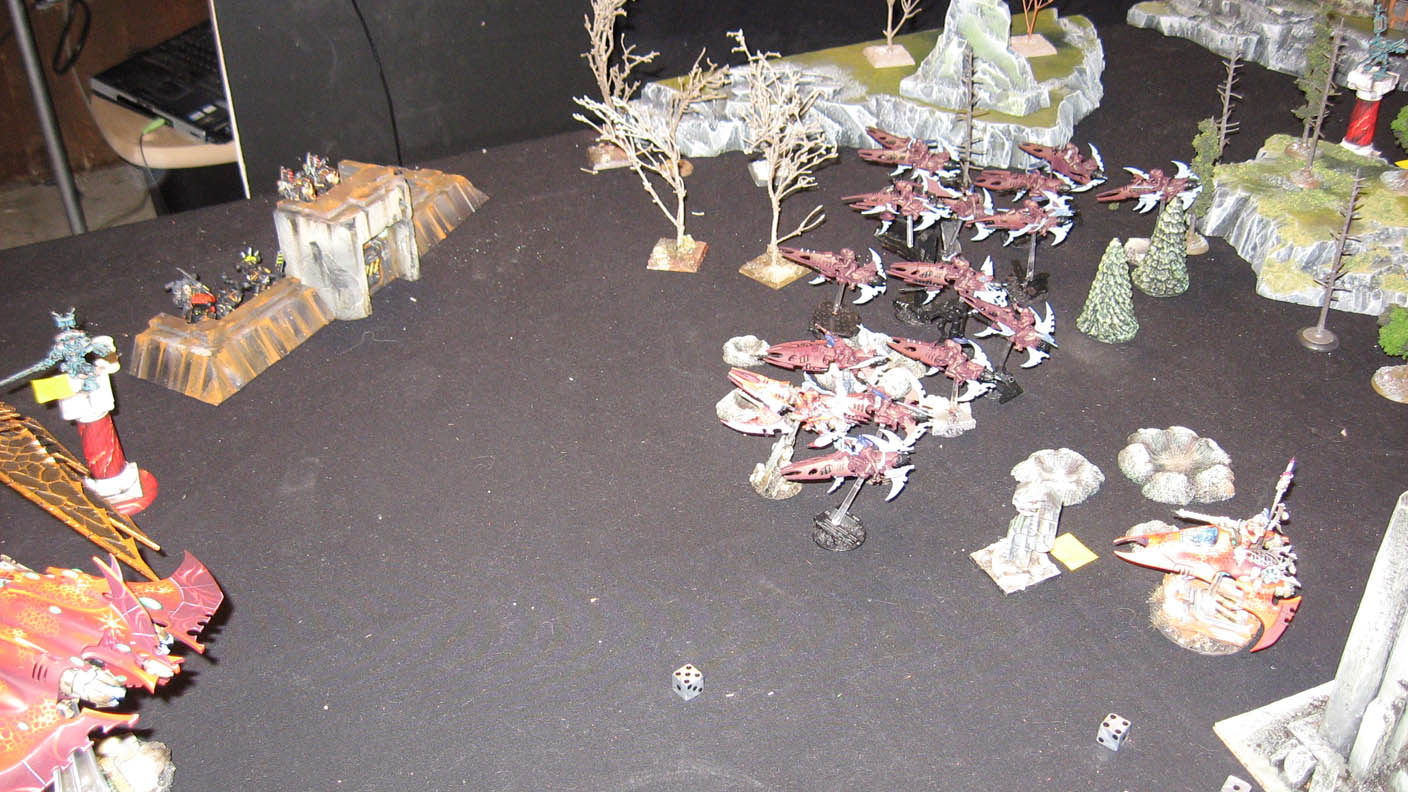 The big squad of jetbikes did execute that flyover on the CSM squad in the fortress.  Between the bladevanes, cluster caltrops, and the shooting from the other jetbike squad behind them, dozens of hits were inflicted on the small squad.  Sadly, only 3 marines were taken down.

That meant the big jetbike squad would be easily wiped out on the next turn.  The Raptors never even had a chance to arrive, as the game was done on turn 3.  Even if the CSM didn't fire a single shot for the rest of the game, they already had more than enough VP's to win.

If they did shoot, whatever was left of the Dark Eldar would have been blown away very quickly. 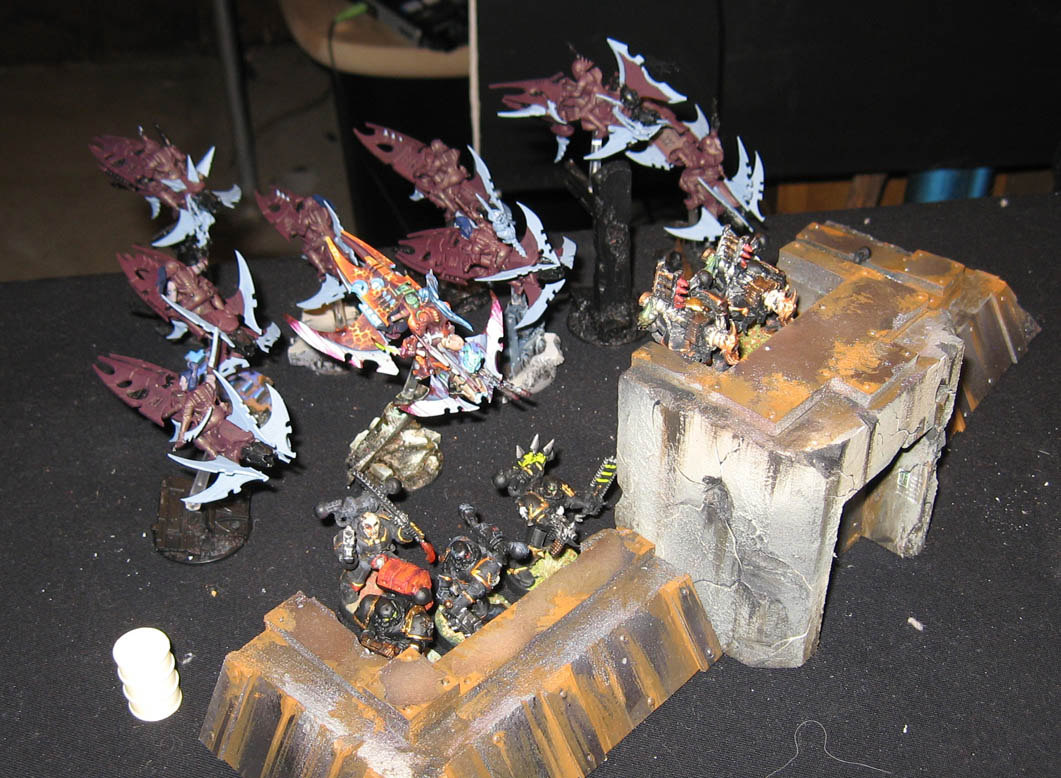 What we have learned about the Dark Eldar in this edition is that against non space marine armies (we did tests against Demons and Imperial Guard), this army can be quite deadly.

However, against anything with a 3+ save, you can forget it.  We tried everything, even doing some small little tests and "what if's" during and after the massacres, such as this latest debacle.  Nothing mattered, as DE weapons are quite useless against what the marines bring to the table.

Dark Eldar do really nasty stuff to low toughness, low save armies, but they fail in armor, shooting (both distance and AP), and even in combat, against those space marines.  I had a feeling this would be the case, but seeing it happen in front of you was less enjoyable.

So, let's hope that I only play against  low save armies at Adepticon!

On the other hand, if I play against marines every game, I will have plenty of time to relax between rounds!  If the dealer area in in the tournament room as it has been, I might actually get to check it out. :-)

Posted by wappellious at 7:13 PM 5 comments: 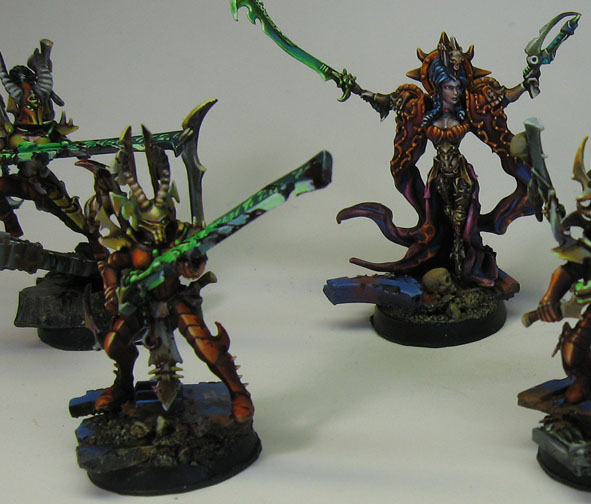 Now we have the entire unit of converted Incubi with the Archon Asharah.  As most of you already know, she is a multi part figure from Raging Heroes, with tons of options for heads and wargear.

Some of the unused wargear was used on the other Incubi. 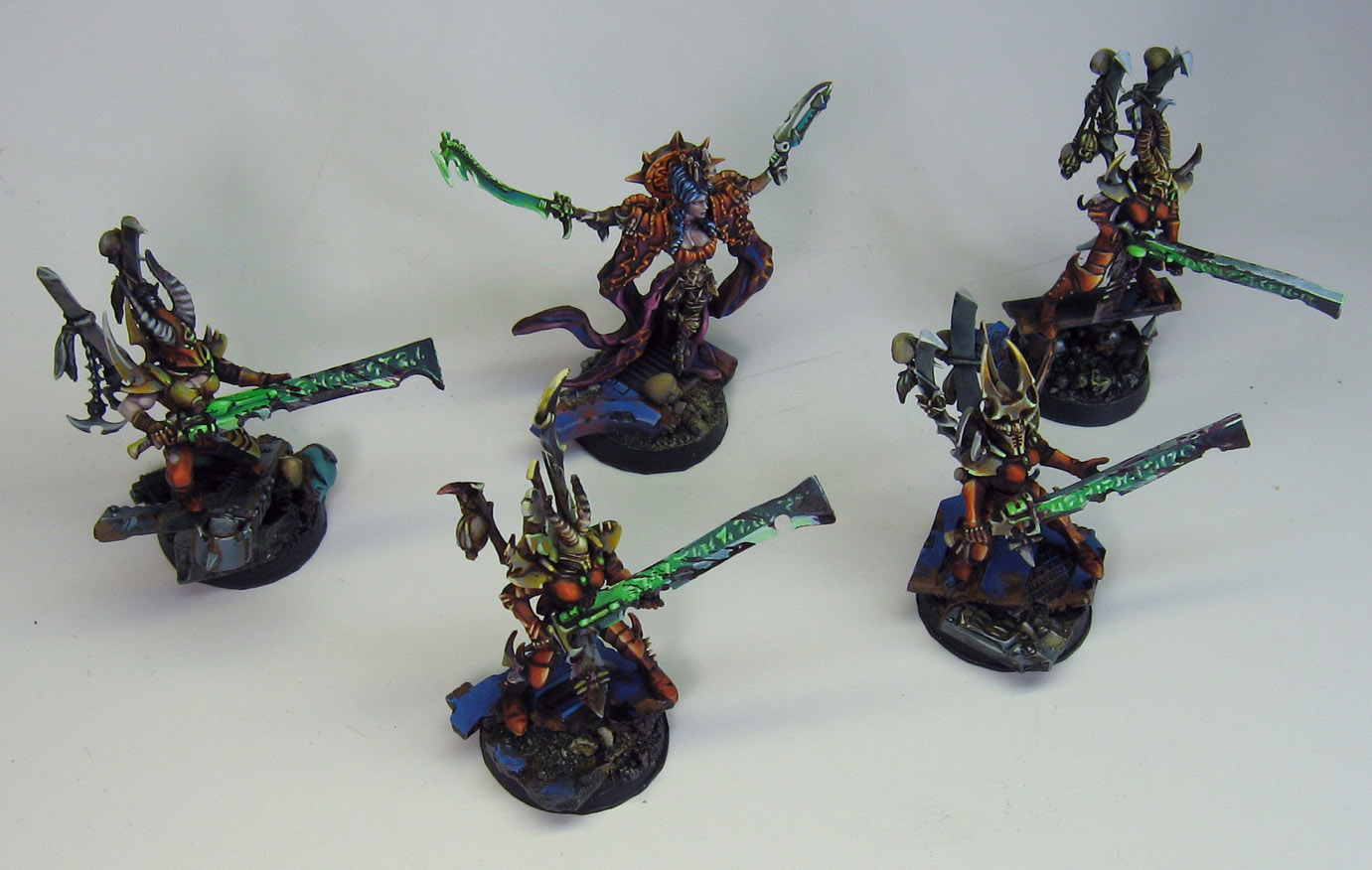 The circukar energy field on Asharah's back gave me the idea for the Blood Star icon that has been painted on many of the vehicles. 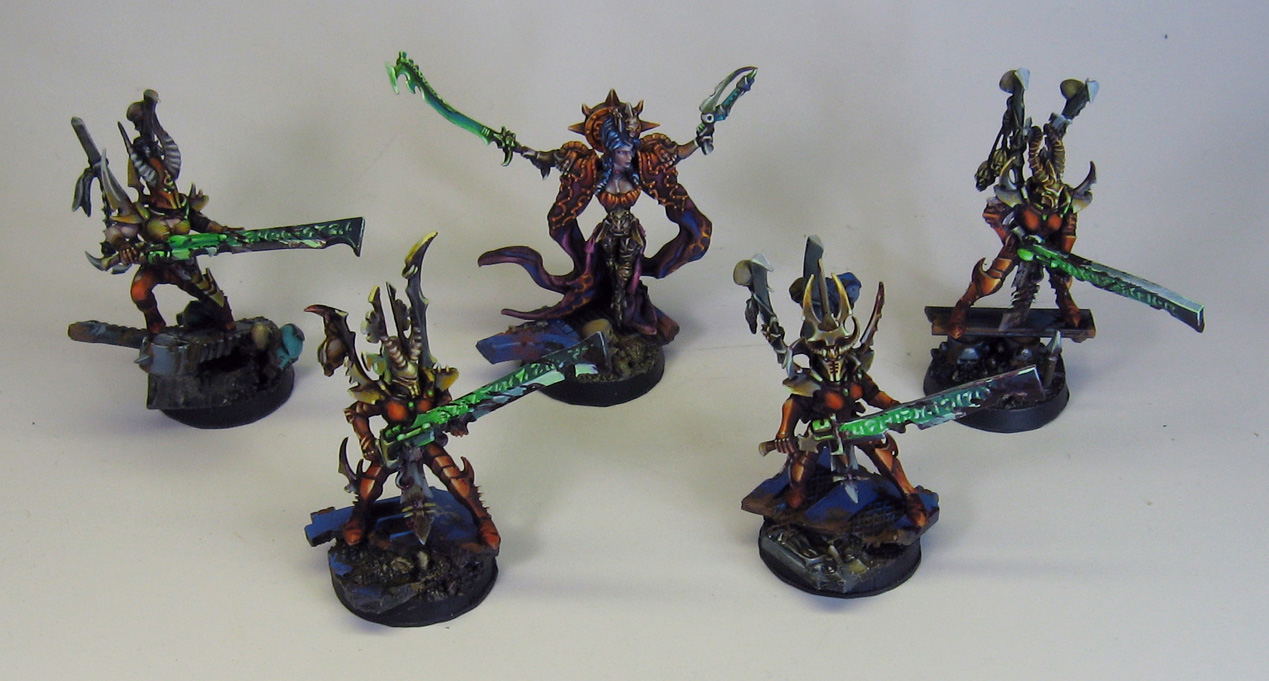 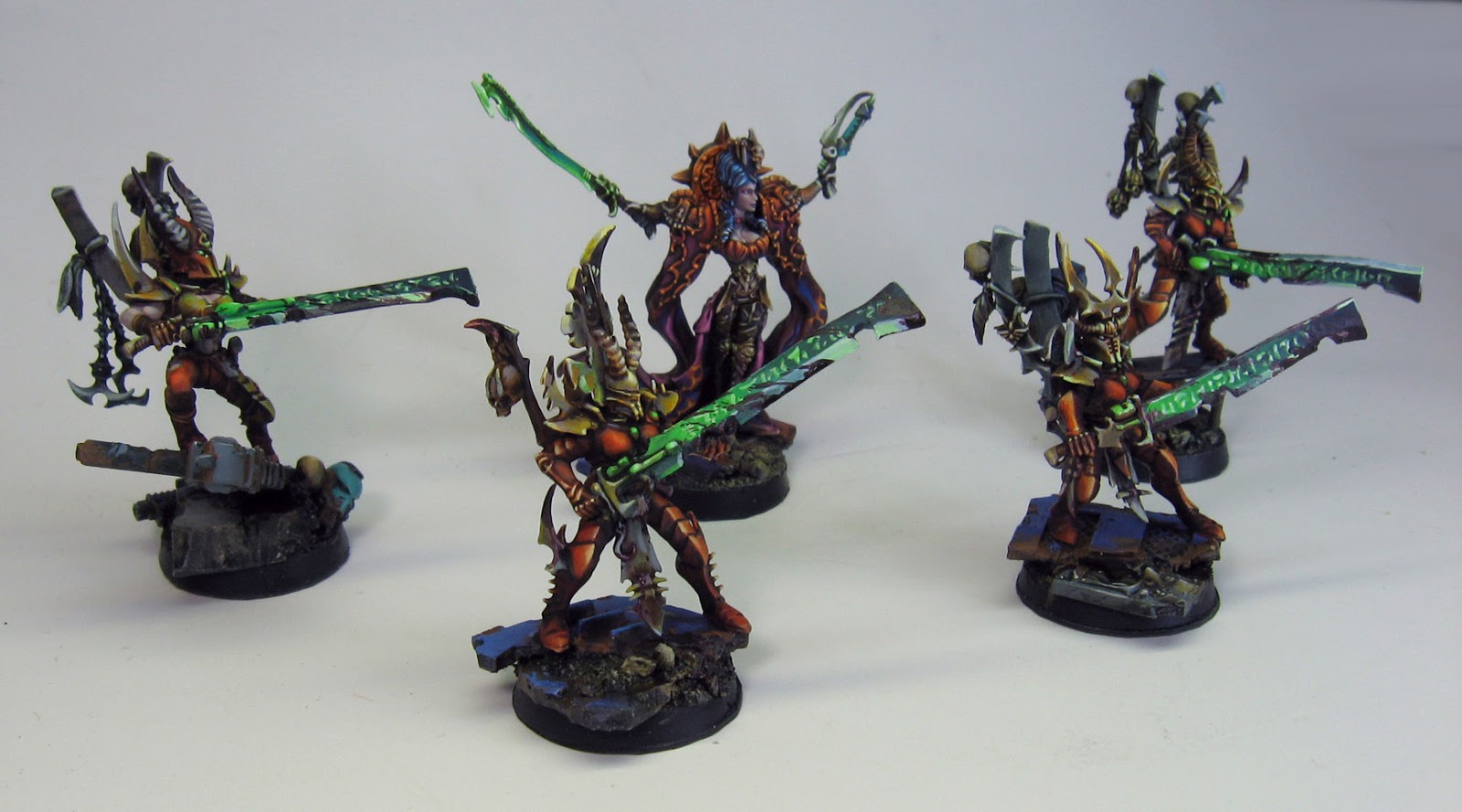 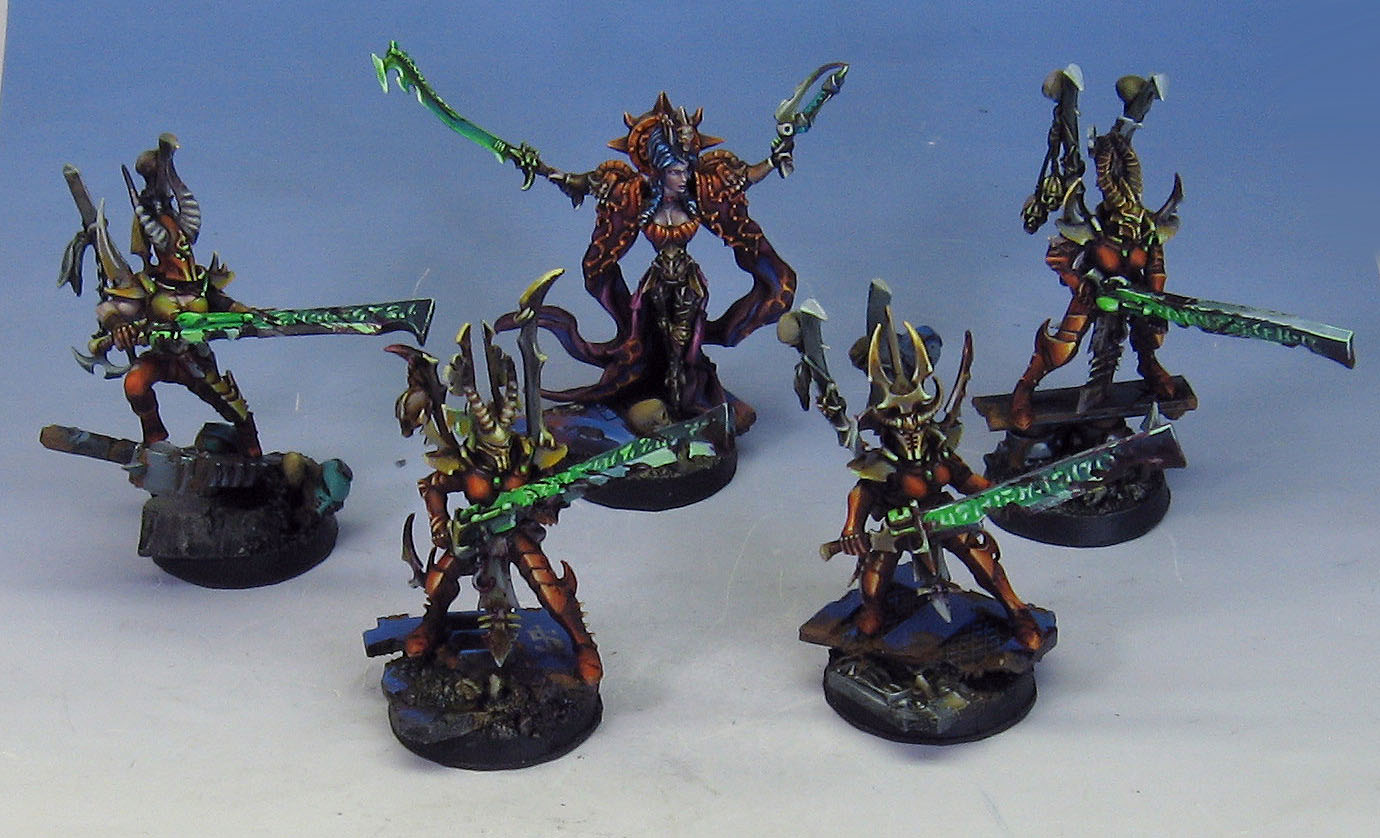 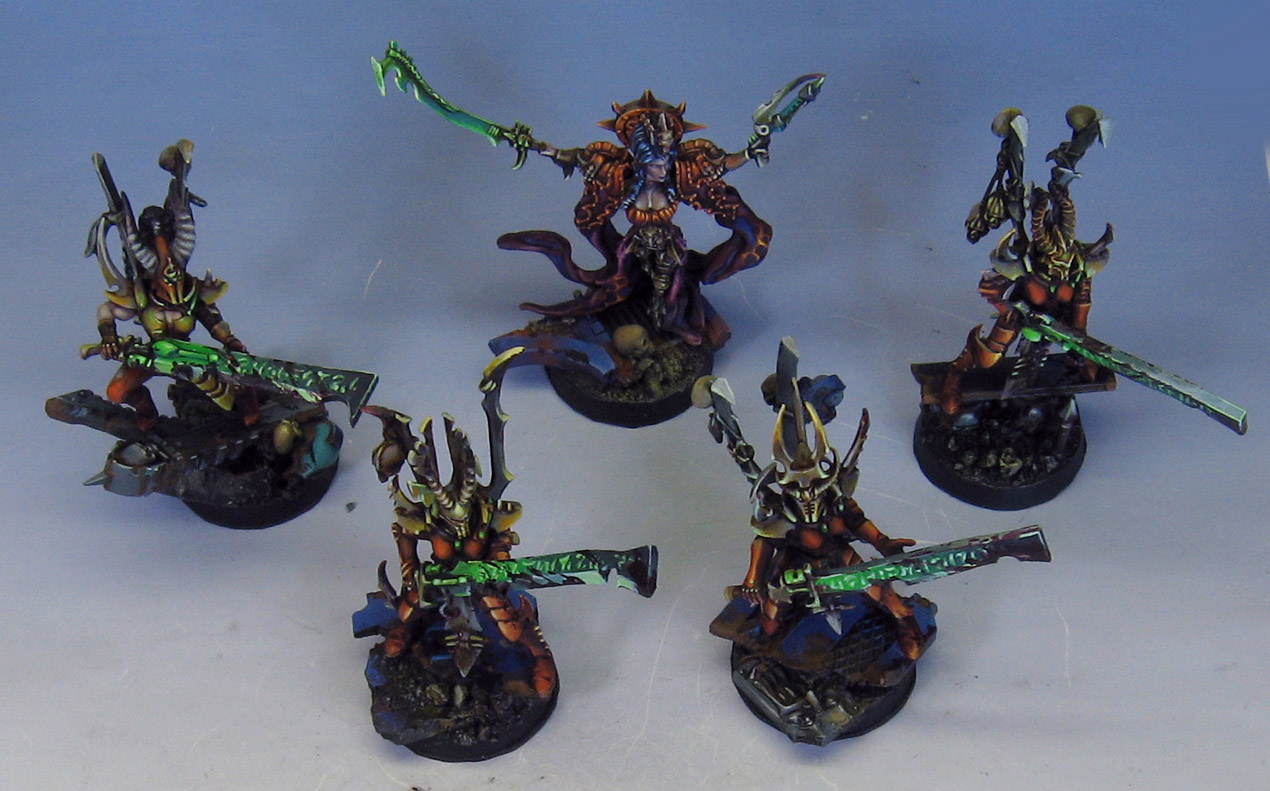 Next up are some pictures of the Kabal Warriors... stay tuned!