More views of the chariots... 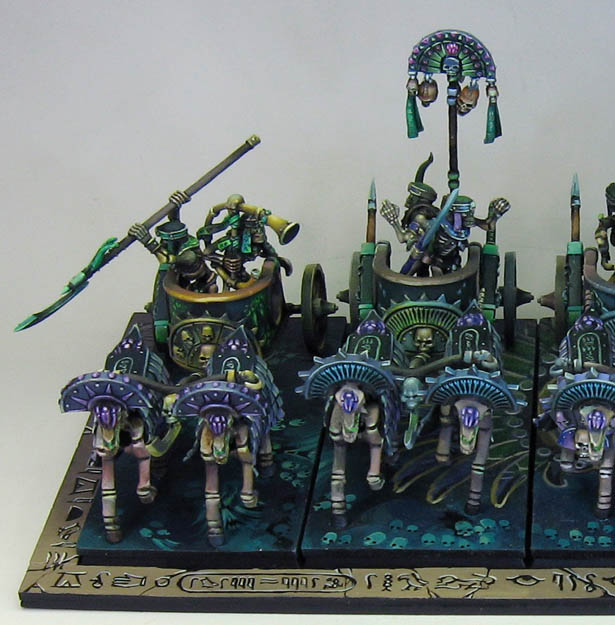 OK!  The packing process begins for Adepticon.  Quite a truckload! 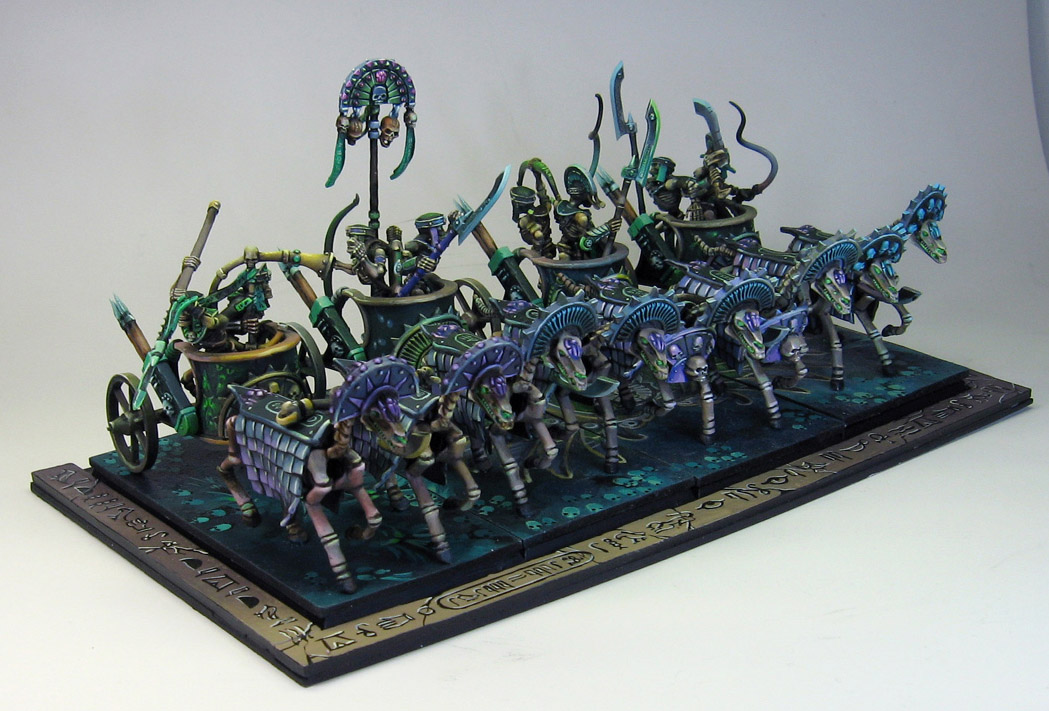 I am dusting off the Tomb Kings army board now, so that I can wrap it up in plastic.  Typical spring weather for Adepticon is 40 degrees and 50 MPH winds.  That means making what you are carrying extra tough. 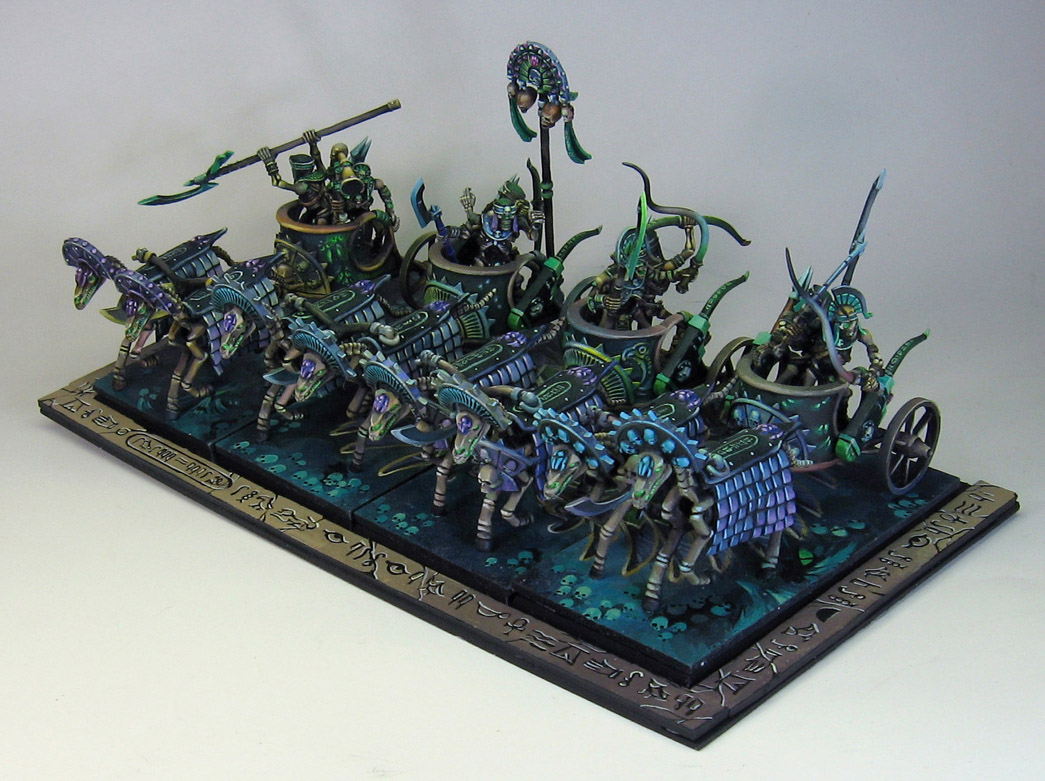 The Fantasy minis are a bit easier to pack up, since the movement trays are magnetized on both sides, meaning I just have to plop them in the magnetized box.  The 40k stuff is also magnetized, but it is obviously more free flowing :-) 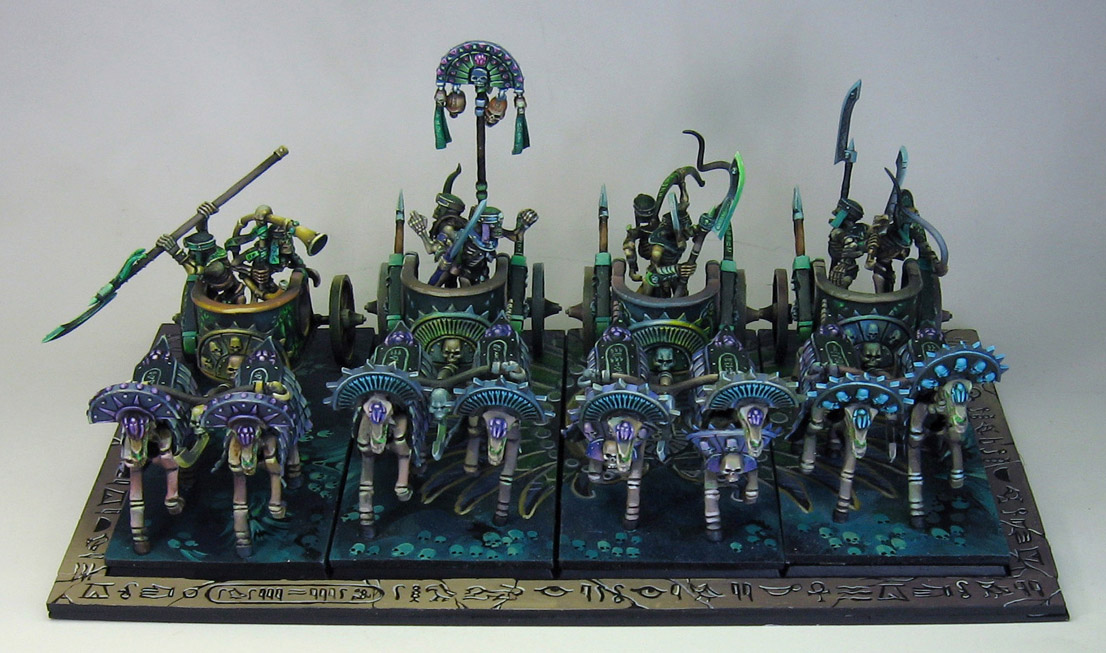 As I mentioned last night, it is very likely that I won't be able to process the images of the events while we are away.  So, I will be posting pictures of the Dark Eldar in the meantime.  I have dozens of images of the army board as it was being built and painted, as well as finished views of the jetbikes and other vehicles. 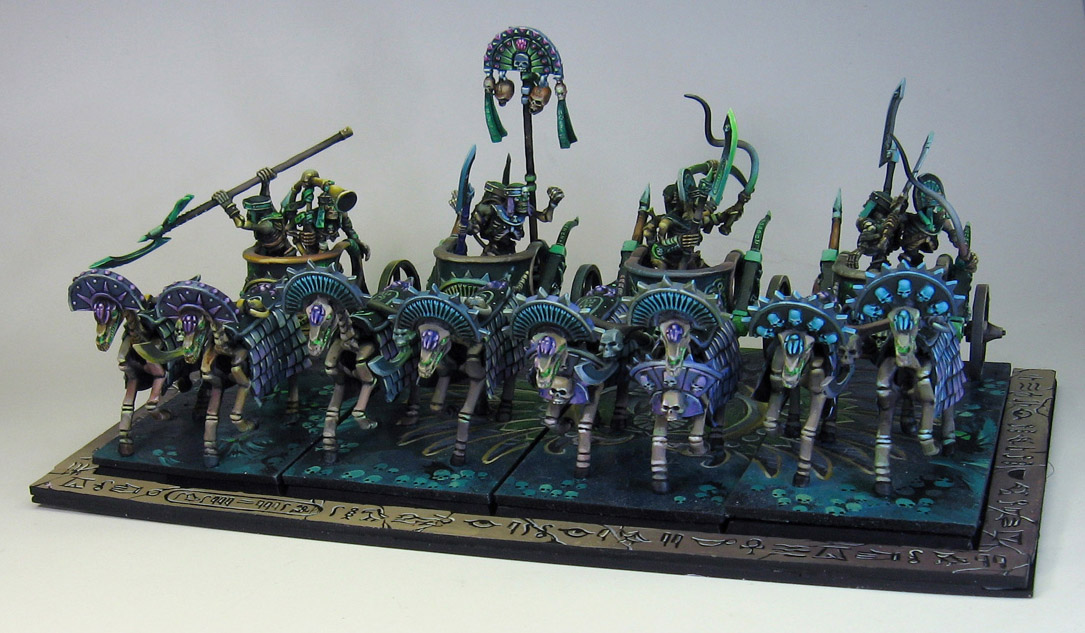 I will try to keep you all updated as to what is going on.  I am only anticipating being in the 40k Champs for Thursday.  Fantasy Champs will take up Saturday and Sunday. 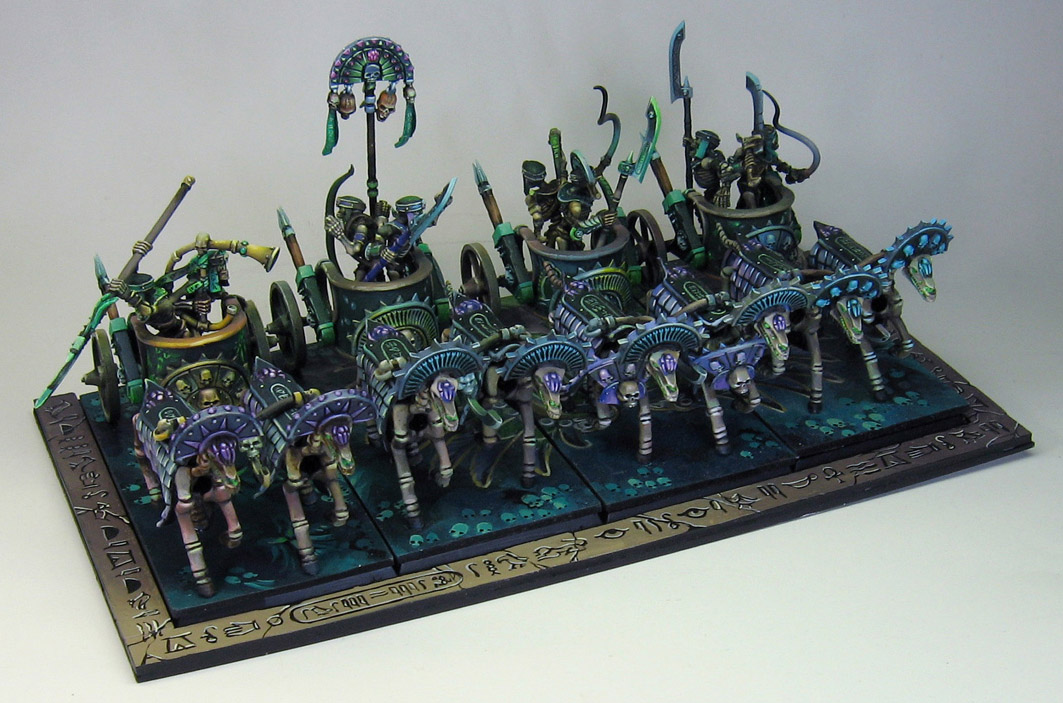 I hope that you folks have gotten some enjoyment and ideas from all the Dark Eldar and Tomb Kings stuff I have been posting.  It may not seem like it, but all these tasks have been practice runs for the painting videos.

The basing, terrain, freehand, bones, blood, etc., will benefit immensely from all these projects.  I have learned all new techniques and discovered new materials which I can now include in those videos. 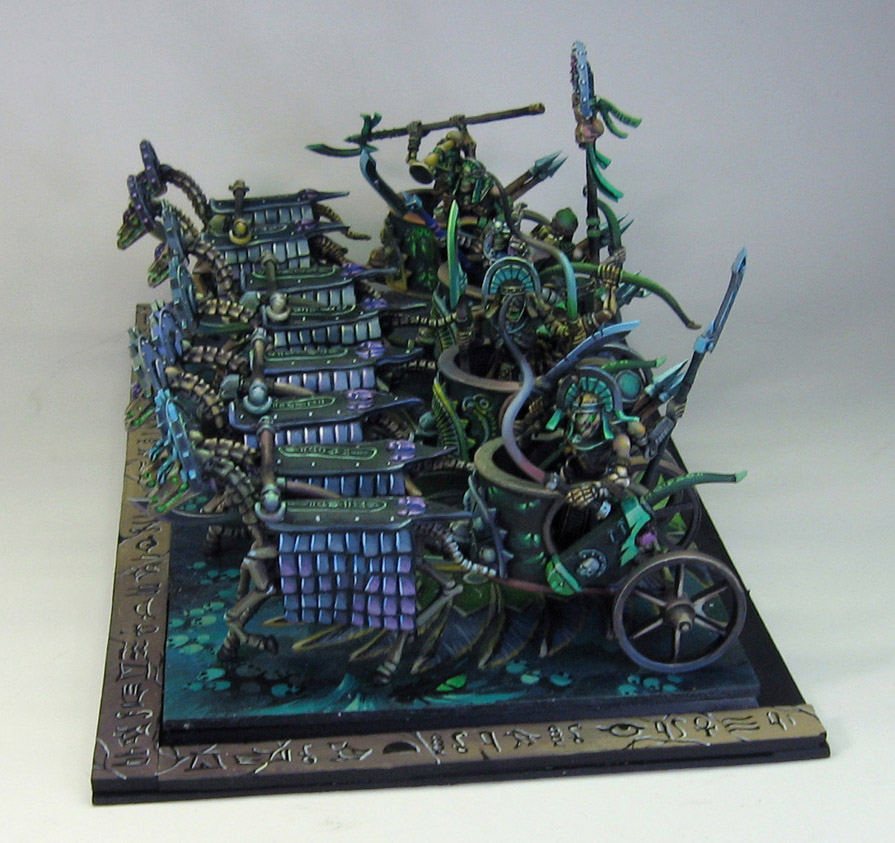 I don't hold out a lot of hope for winning games in the tournaments.  I have had little or no time to practice, which is never good.  There are also a ton of brand new armies out there, so if I face them, I will have absolutely no idea of their abilities.  Oh well. :-) 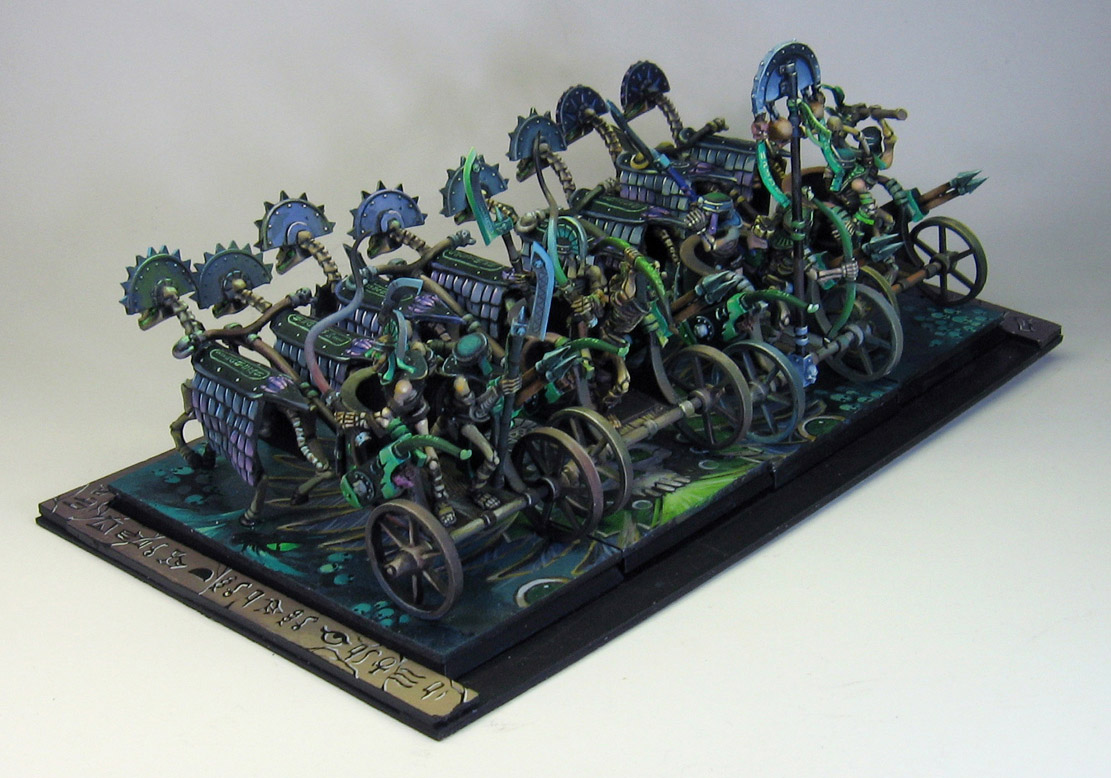 So, I think there will be one post tomorrow.  Probably some jetbikes! 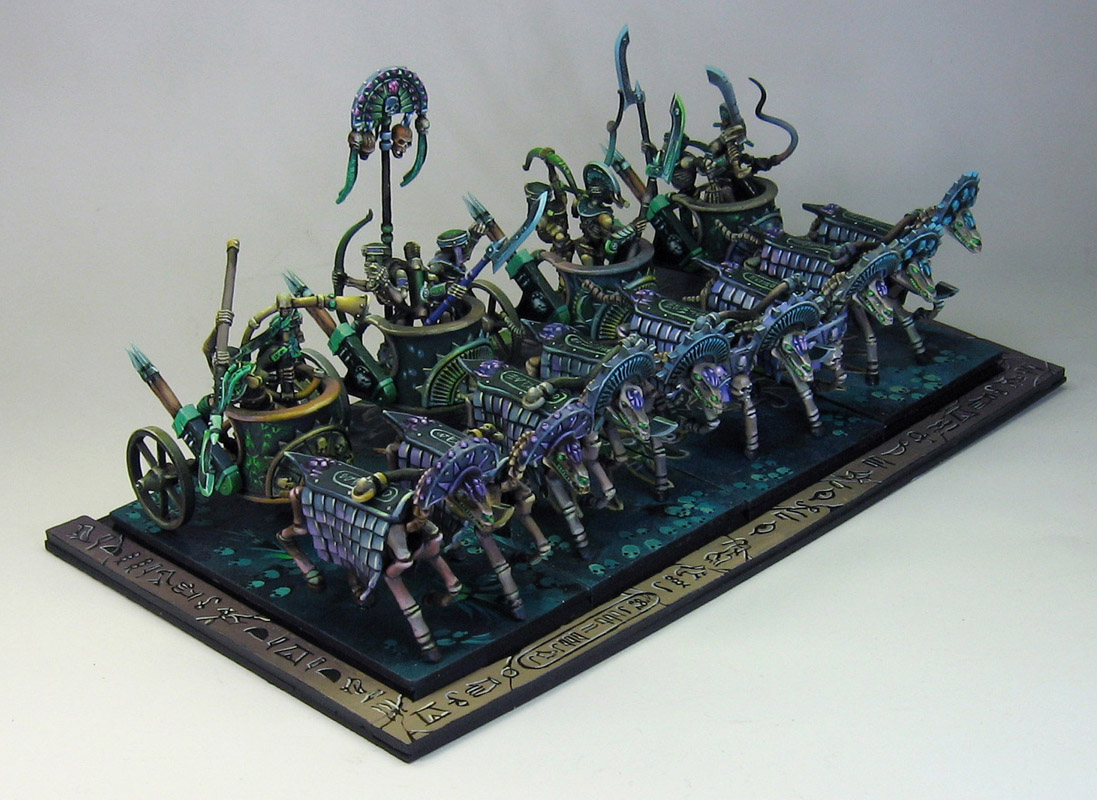 Posted by wappellious at 7:24 PM 5 comments: 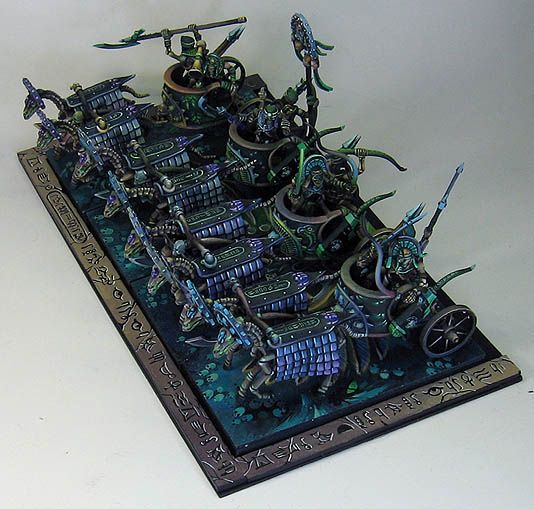 Here are the first images I was able to shoot of the chariot unit.  Lots of hard work to get the horses and crew unified, since they were painted many months apart. 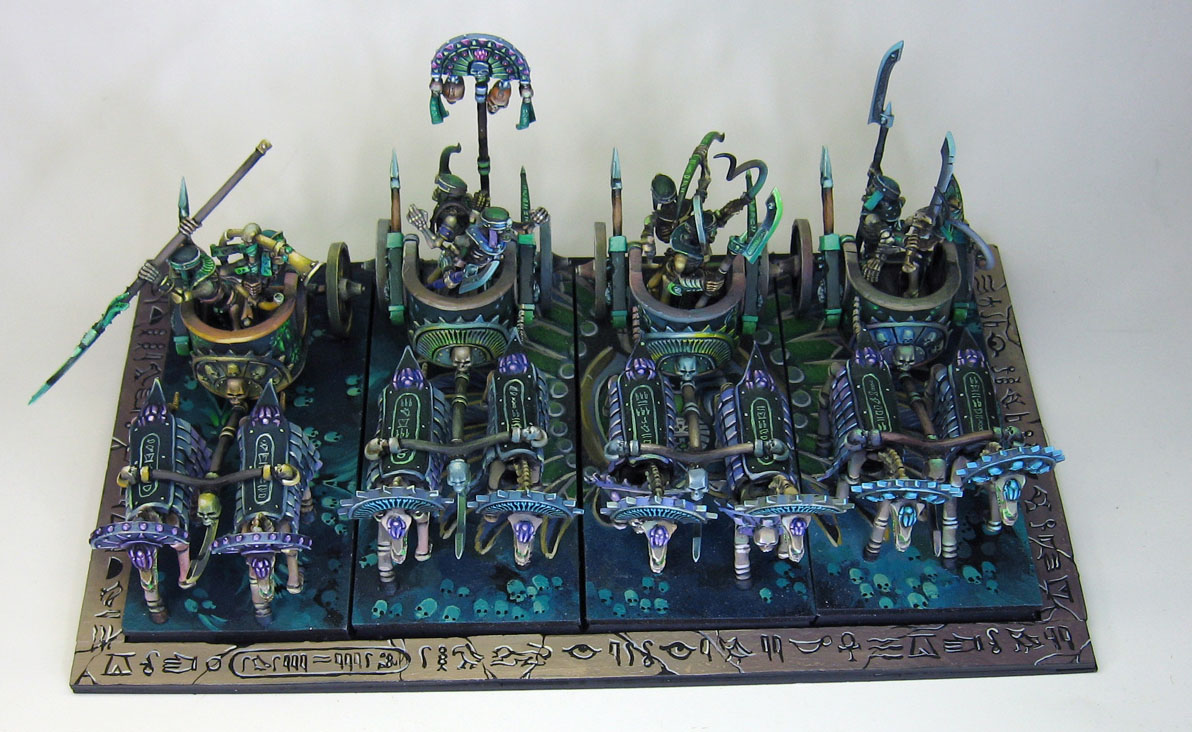 In some ways, 'resurrecting' partially finished minis is more difficult than simply starting from scratch.  There was a bit of 'undoing' of the old to make it more compatible with the new. 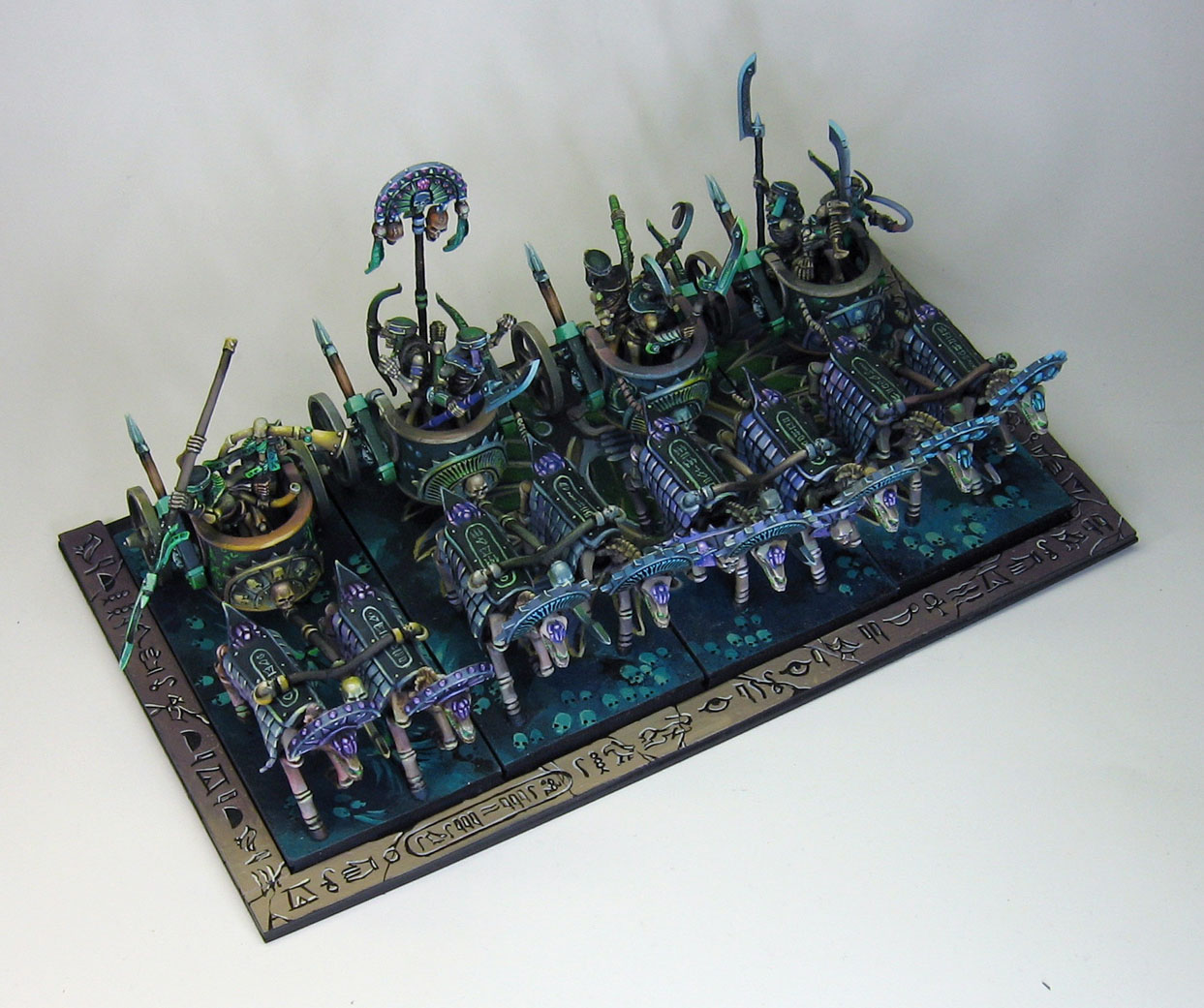 Plus, my techniques tend to change weekly given the volume of work that I do every day, so it was a bit like trying to build a modern day hybrid vehicle using production techniques on an SUV from the 90's :-) 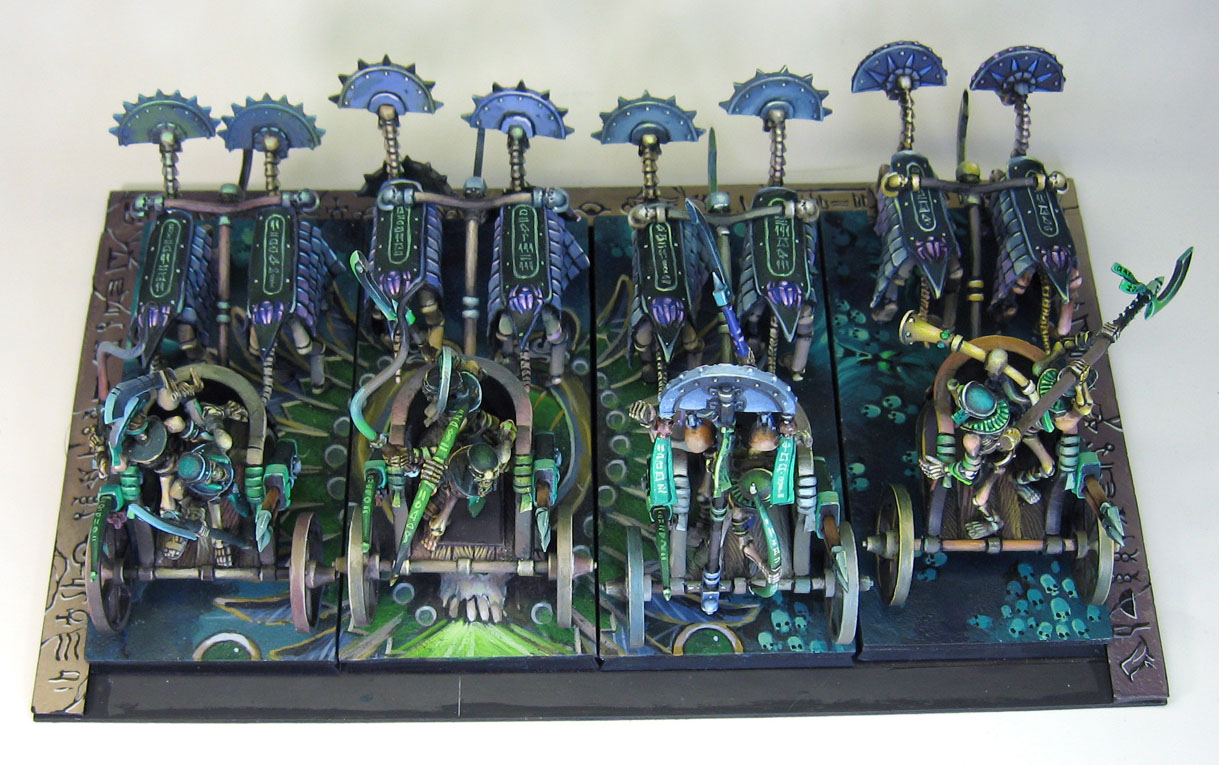 Anyway, this version of the unit is now complete! 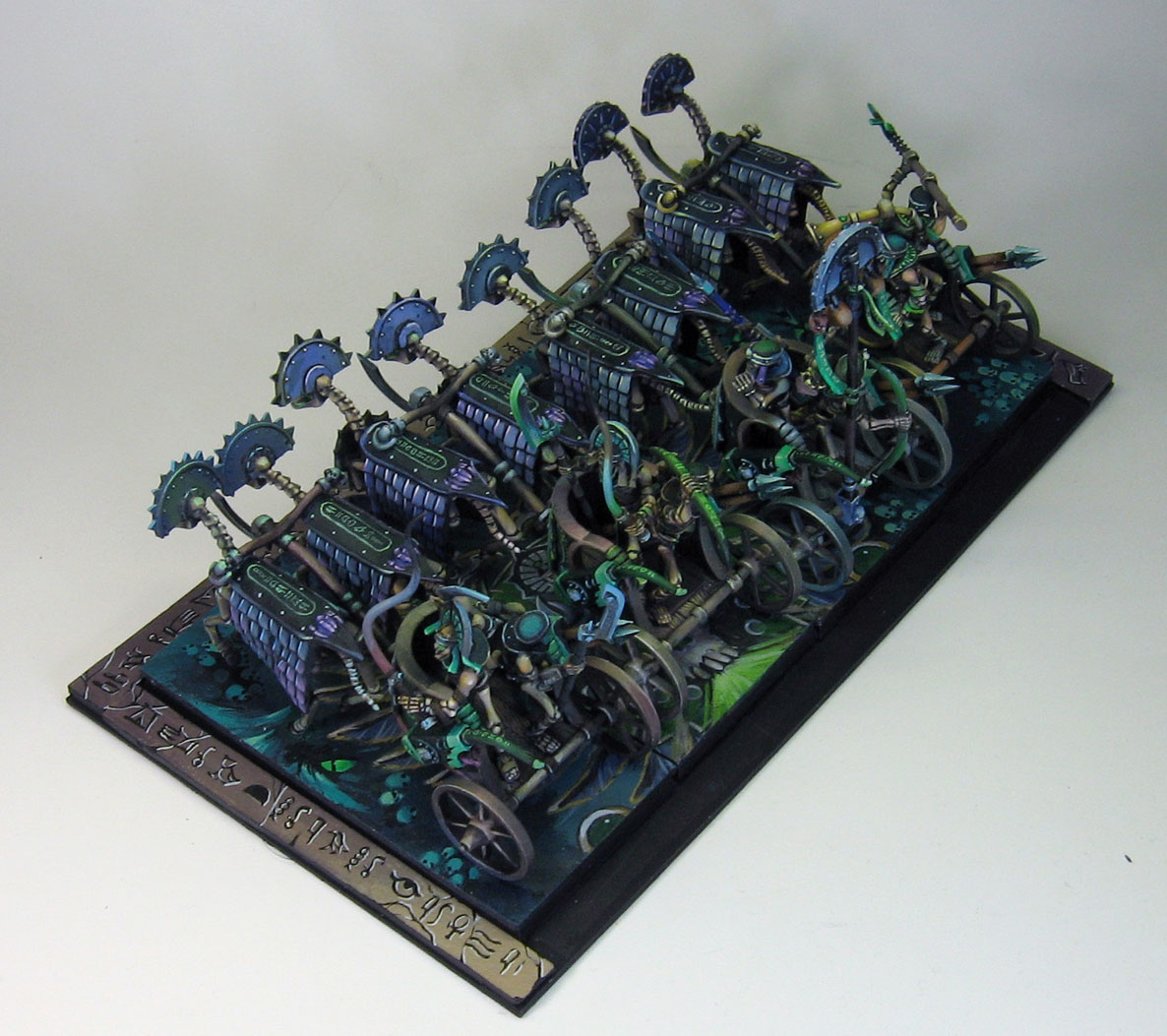 I have some other views that I will post as well.  I am taking more pictures of finished Dark Eldar figures, and of the painting of the army board.  With the restrictions of time and other circumstances, it is very likely that I will not be able to process the images I take while I am at Adepticon.  So, I will be making blog posts during the weekend that have images which I am working on now. 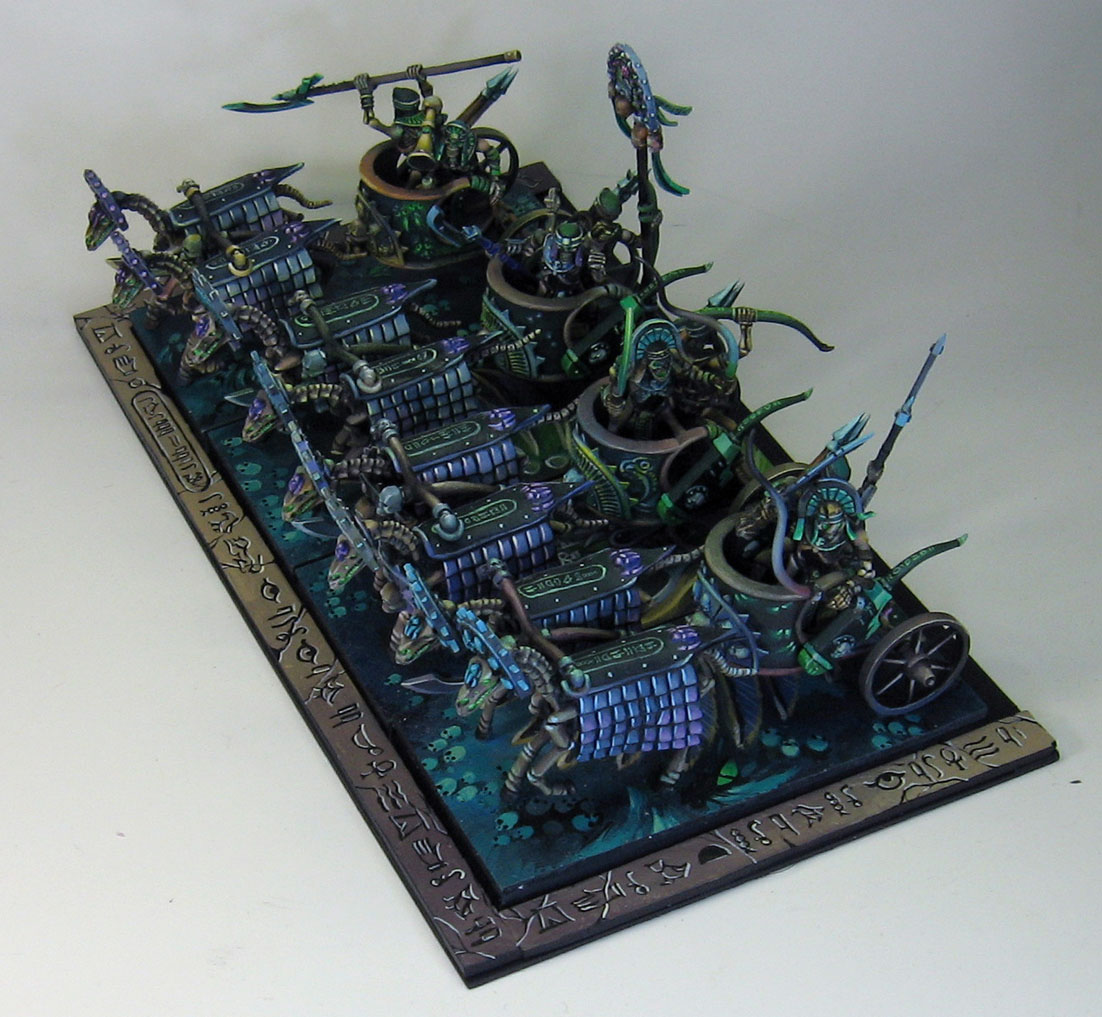 I did this last November during Bilbo's Bash.  I know many folks got confused by seeing images of the army board under construction one day into the tourney! :-)

In the end it worked out well, since I got a chance to make better game reports post Adepticon as opposed to rushing into them each night of the con. 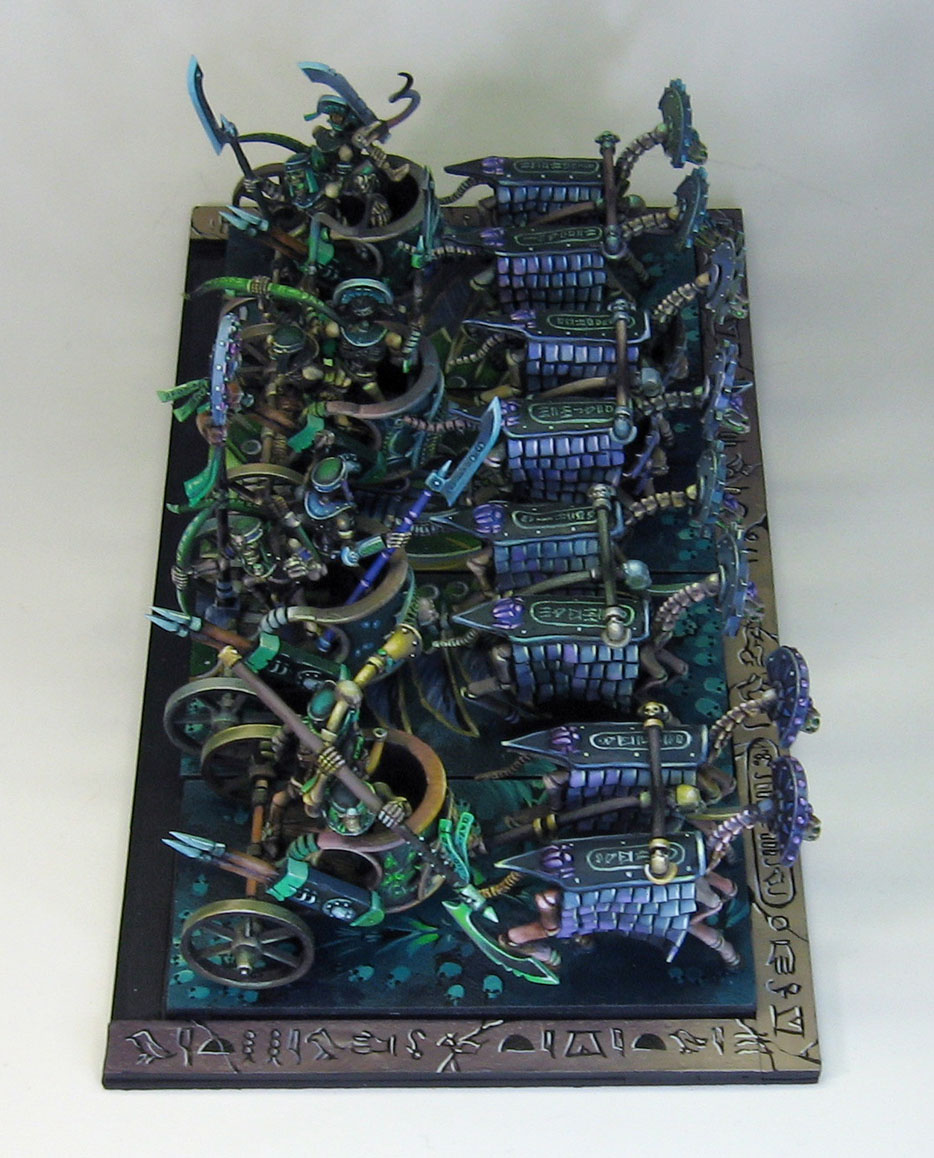 Posted by wappellious at 5:19 AM 8 comments: