The Road to Adepticon begins NOW! Work in progress on a color test mini 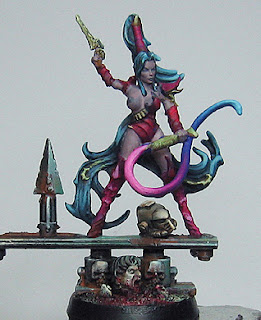 You have seen a few examples of the Raging Heroes fantasy Vestals, so it is high time that you get to see the sci-fi versions!

This figure is a color test for my Dark Eldar army for Adepticon 2013.  Each squad is going to be a different set of colors.  The basing will be the same for all squads, and here is an example of a painted base. 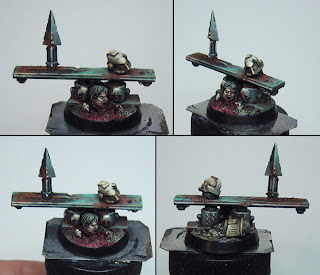 Starting with the figure, I try to establish the same flesh tone that you saw in the fantasy Dark Elf tone earlier this week. 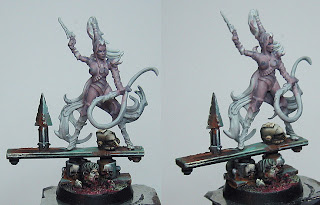 The hair color is put in place to give me a guide as to how light the flesh tone needs to be.  I mixed a dark blue green with a bit of deep purple, and then used a sky blue to lighten it. 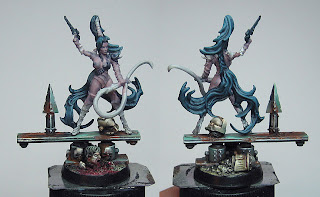 The hair is lightened further, by mixing in some very pale flesh color with the sky blue. 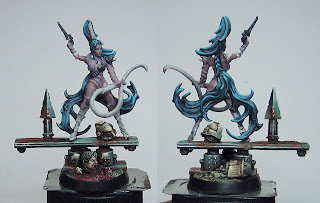 Time to establish the armor color, as well as the agonizer. 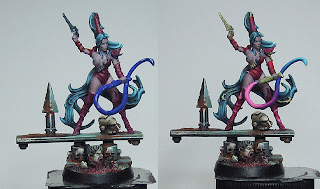 The next post will illustrate some of the glazing and tinting which took place.  Stay tuned! 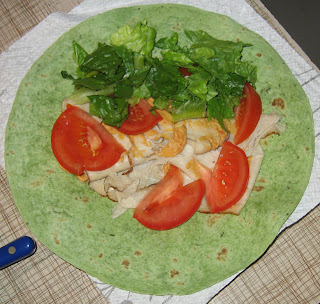 Had to make something quick to chow down on while watching the SEC Championship game!!


Posted by wappellious at 5:54 PM No comments:

The Mighty Mimes of Moria take the field! 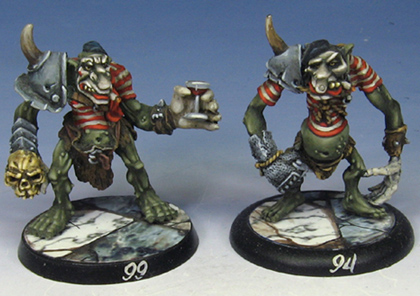 OK!  Introducing the rest of the Mimes!

You have already met the Coach and a few of the team members, (including star player Jaques with 44 SPP's amassed!)  but there are many more.  Here we have Lutins Merci, Guillaume (with a whopping 53 SPP's), Le Grenadier, and Guy. 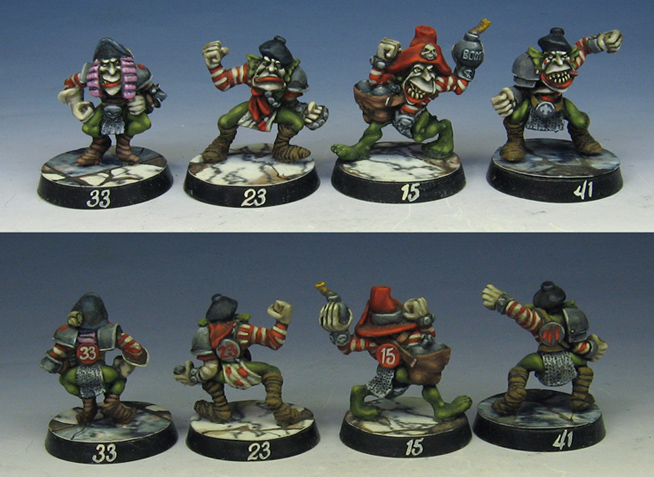 In this photo, we have Lutin Orvile, who, despite an injury which slowed him down, had block.  He was a great candidate for the defensive Gobbo toss, in which he would be thrown at the opposing ball carrier in the backfield... especially throwers, who are almost never given block.  The 2 dice opponent's call then works in  your favor!  Next is Lutin Michelle, followed by Lutin Luc, who with his +1 agility was the guy who got the ball.

It was his job to hand it off to Guillame or Jaque, who would then be tossed by Pierre with his Strong Arm. 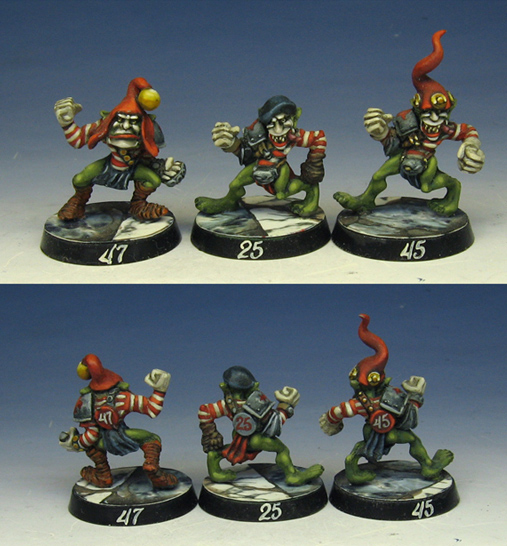 Speaking of Pierre, here he is with his buddy Francois. 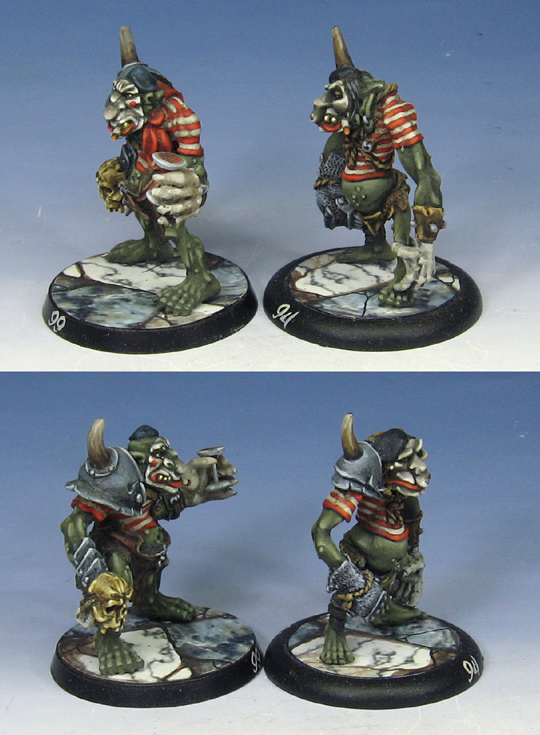 The gobbo toss formation was a very specific one, developed over many tosses. :-)  No one ever figured out how to stop it.  If they did back up in an attempt to do so, I just marched down the field, using saws, fanatics, and my block Lutins to clear the way.  All I needed to do was get far enough down the field for someone with sprint to get through a hole to the end zone! 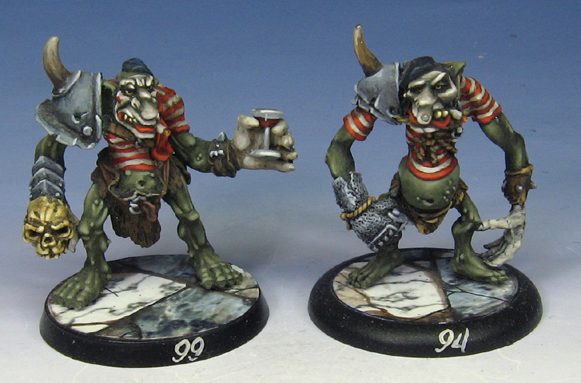 Look at Francois with his huge glass of Chablis.  He never played without it. 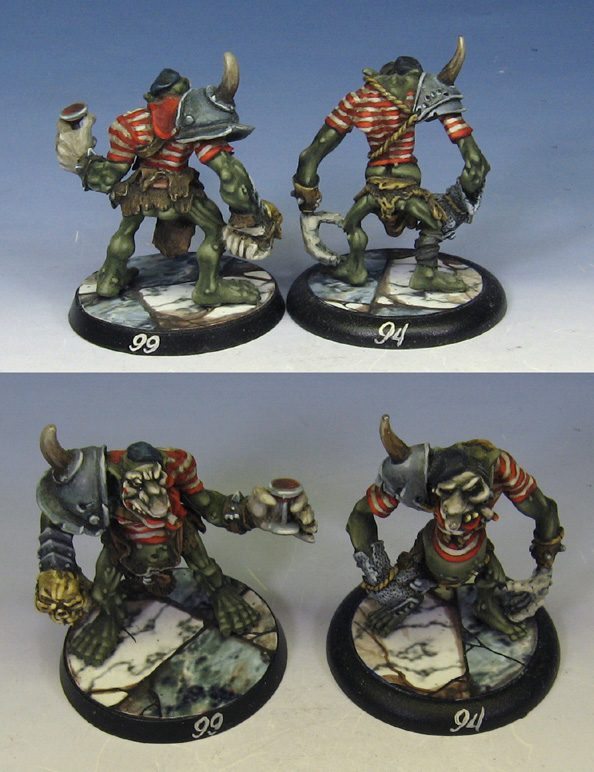 Now we have some tricksters, such as Le Baton de Pogo, and Le Tronconneuse. 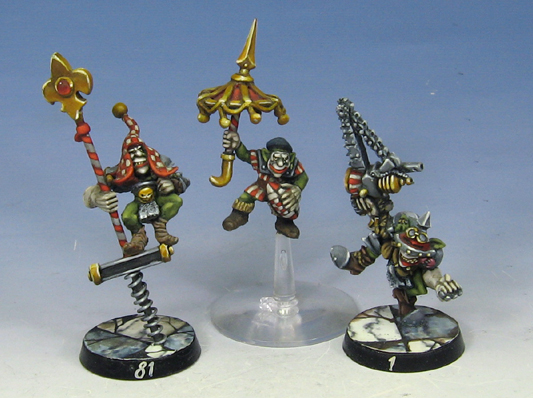 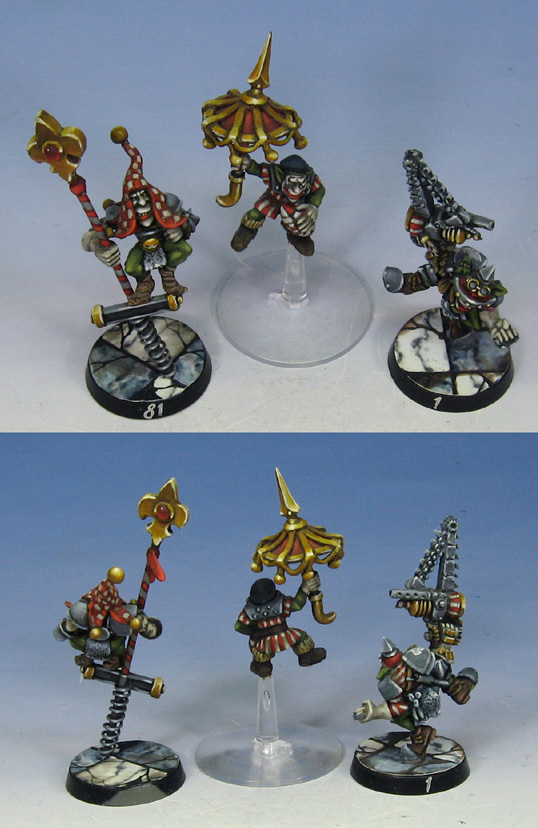 The parasol Lutin was used as a marker during the throwing process.  Since the throw can never be accurate (bummer!), he tends to bounce around into places you would rather he not go!

Usually, a goblin toss would only work 1 out of every 3 attempts once I had all the skill sets amassed on the correct players.  Without them, it is more like 1 in 6! 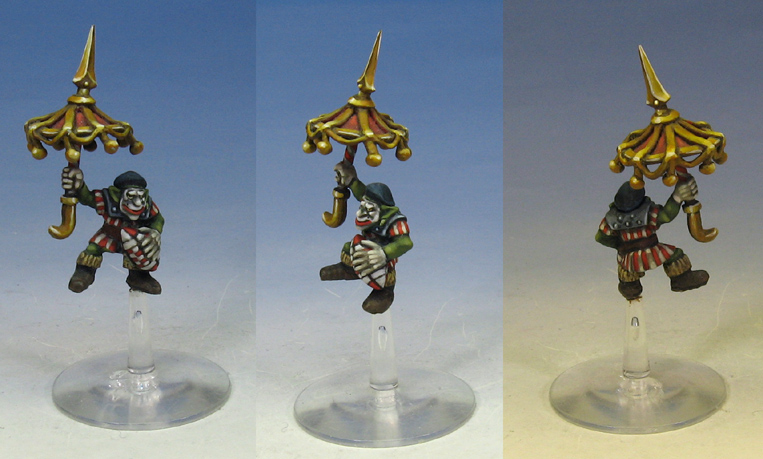 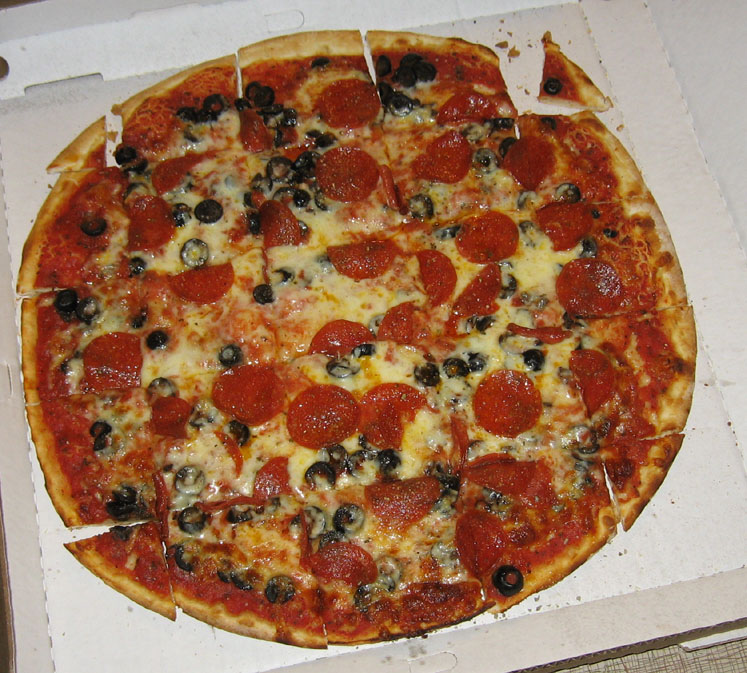 Looking at the final team roster, these guys had compiled over 260 SPP's, with a winning record of 7-6-3.  Not bad for Gobbos!  There were 8 players with 20 or more SPP's.  There was a great range of sneaky skills, with lots of side step, block, sprint, jump up, etc.

The down side, of course, was a Goblin team that gave up tons and tons of inducements.  Does not seem right, does it? 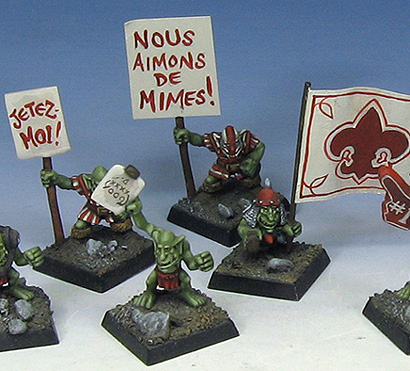 Now it is time for some individual shots of the Mimes!  First, however, an unobstructed view of the field. I also created dugouts and score counters.

Some close ups of the fans and the extra coaching staff.  Mapping out those gobbo toss plays is a big part of any coordinator's day!! 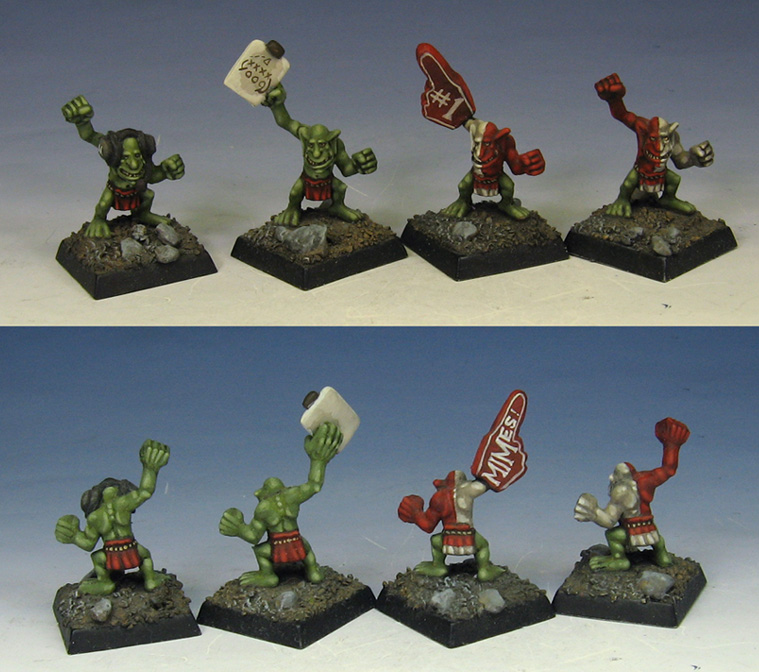 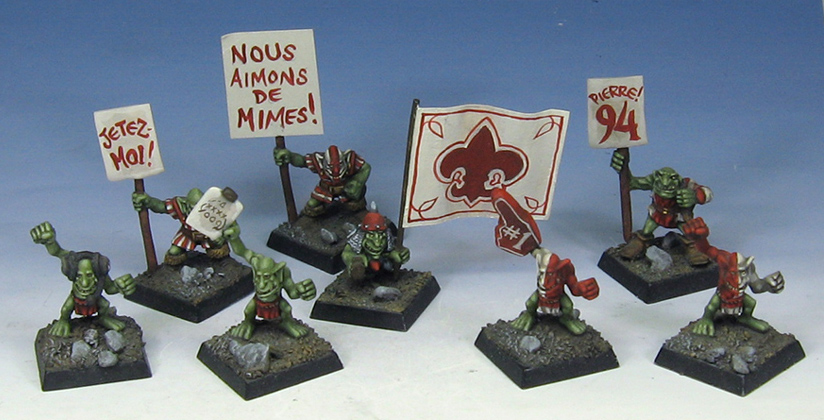 The star goblin bombardier was a favorite freebooter of my own.  Two bombers out on the field at the same time really put a dent in Dwarven plans!!  I also liked to let the opponent get a bunch of players surrounding a bomber, so that a fumble was almost guaranteed.  Lots of extra buys knocked down for free. ;-) 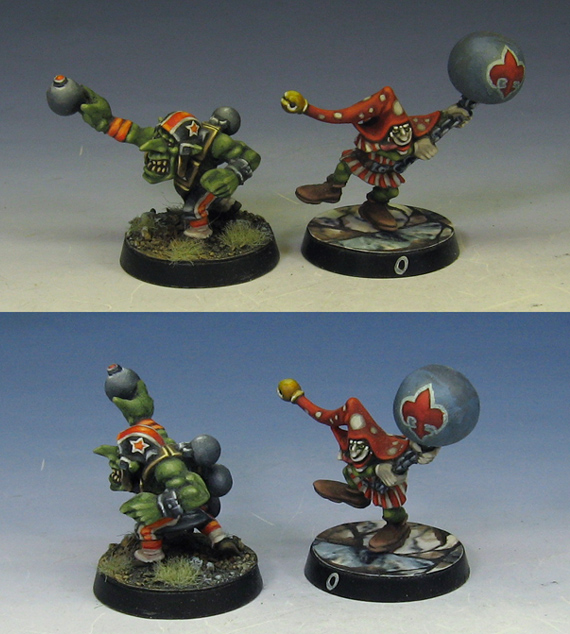 I usually had an extra fanatic as well, although they never were as effective as the bombers. 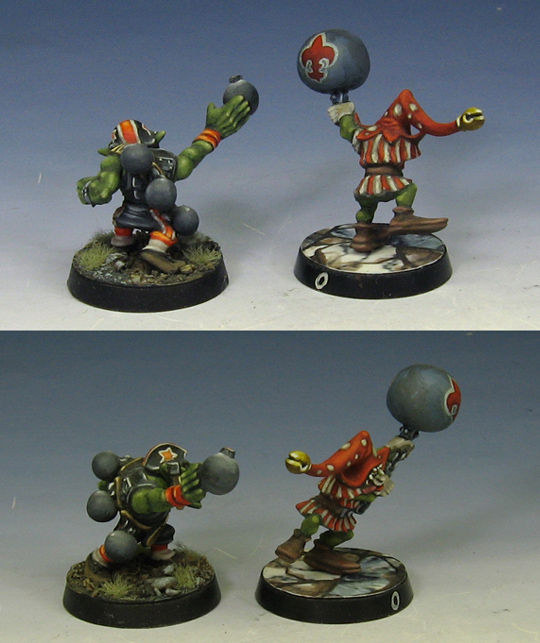 I used green stuff to make the bandoleer of bombs...

And here is, Charles De Gualle leading the way!

That loaf of bread felled many an opponent!! 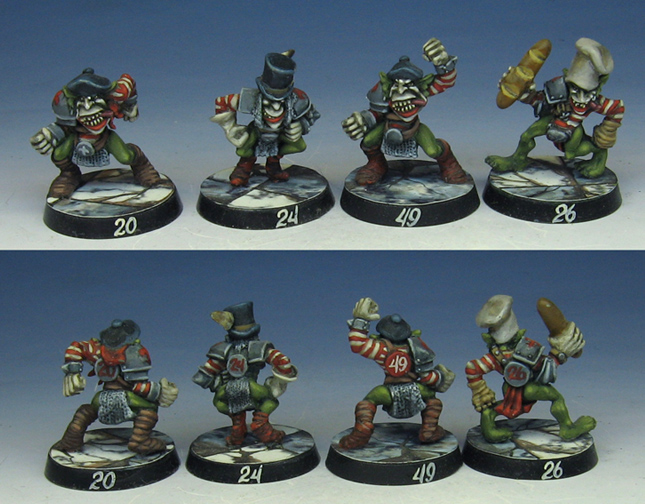 Stay tuned for more features tomorrow!!  Or later today, I should say.