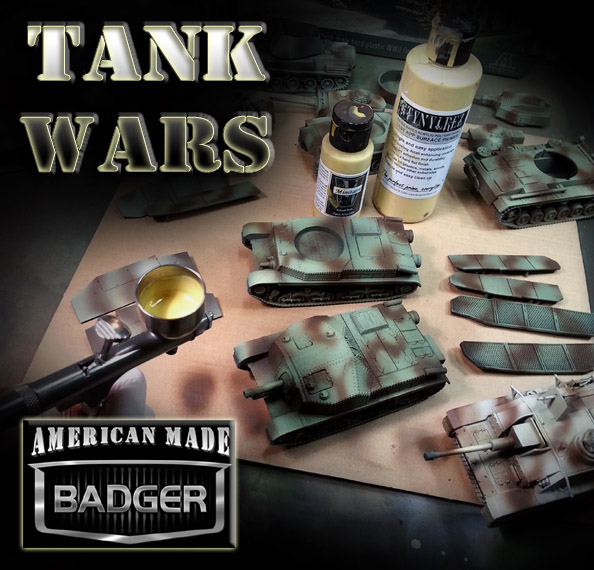 You have seen me post a few articles before about the use of Badger airbrush products over the last 10 months, mostly in the form of trial and error to see what might be possible.

In the intervening months, I have been testing, prodding, testing again, various materials and methods to see how I might be use this new set of tools.  I have also been changing the physical setup of the work area over and over again to see what works best, to figure out how to deal with the spray dust, and all the things that go along with airbrush use.

At this point, I have determined that the Airbush is ideal for mass application of Shaded Basecoat on figures and vehicles alike.  There is almost no difference in how I would do the Shaded Basecoat with a 'regular' brush, except that I can now work on 100 figures at a time instead of 20! 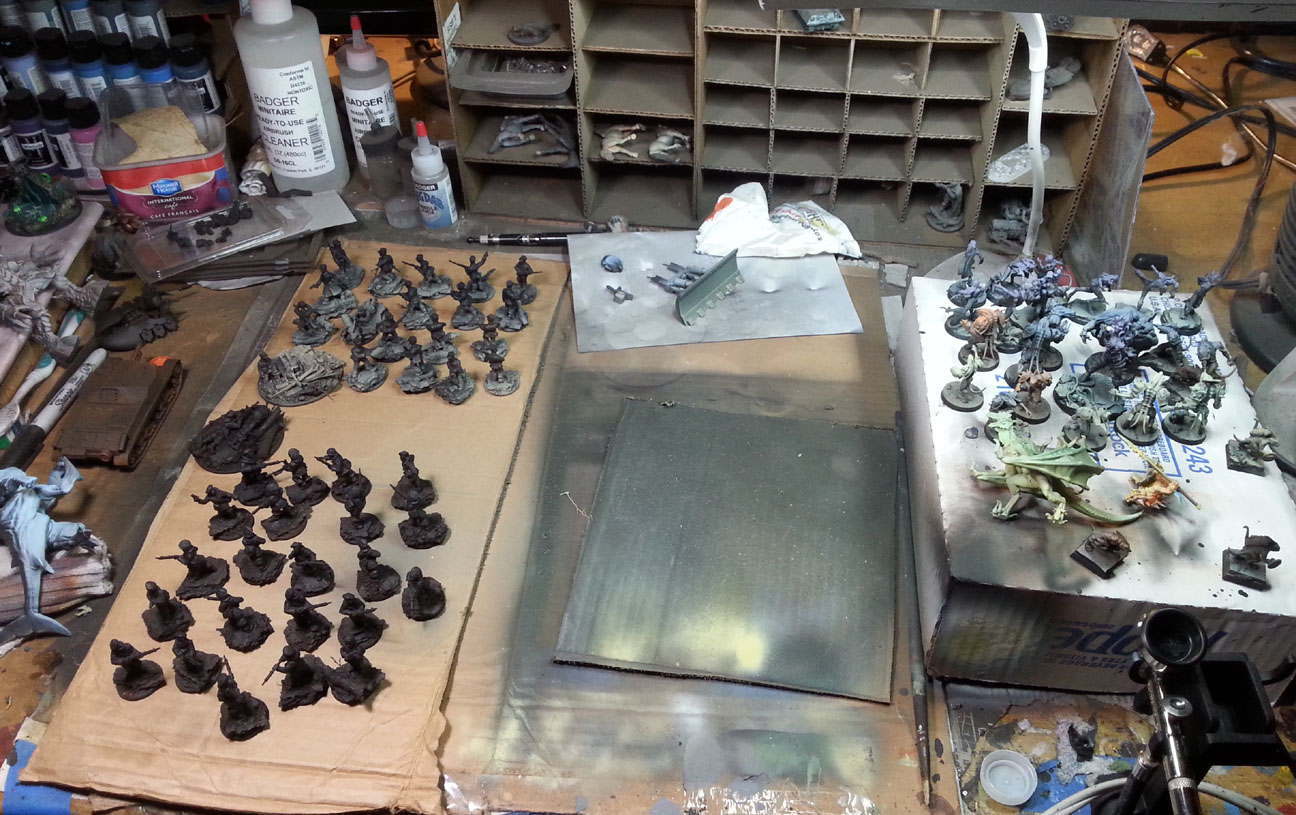 In fact, I work on so many simultaneous objects at once, that more time is spent figuring out ways to stage it all around the actual work area!! 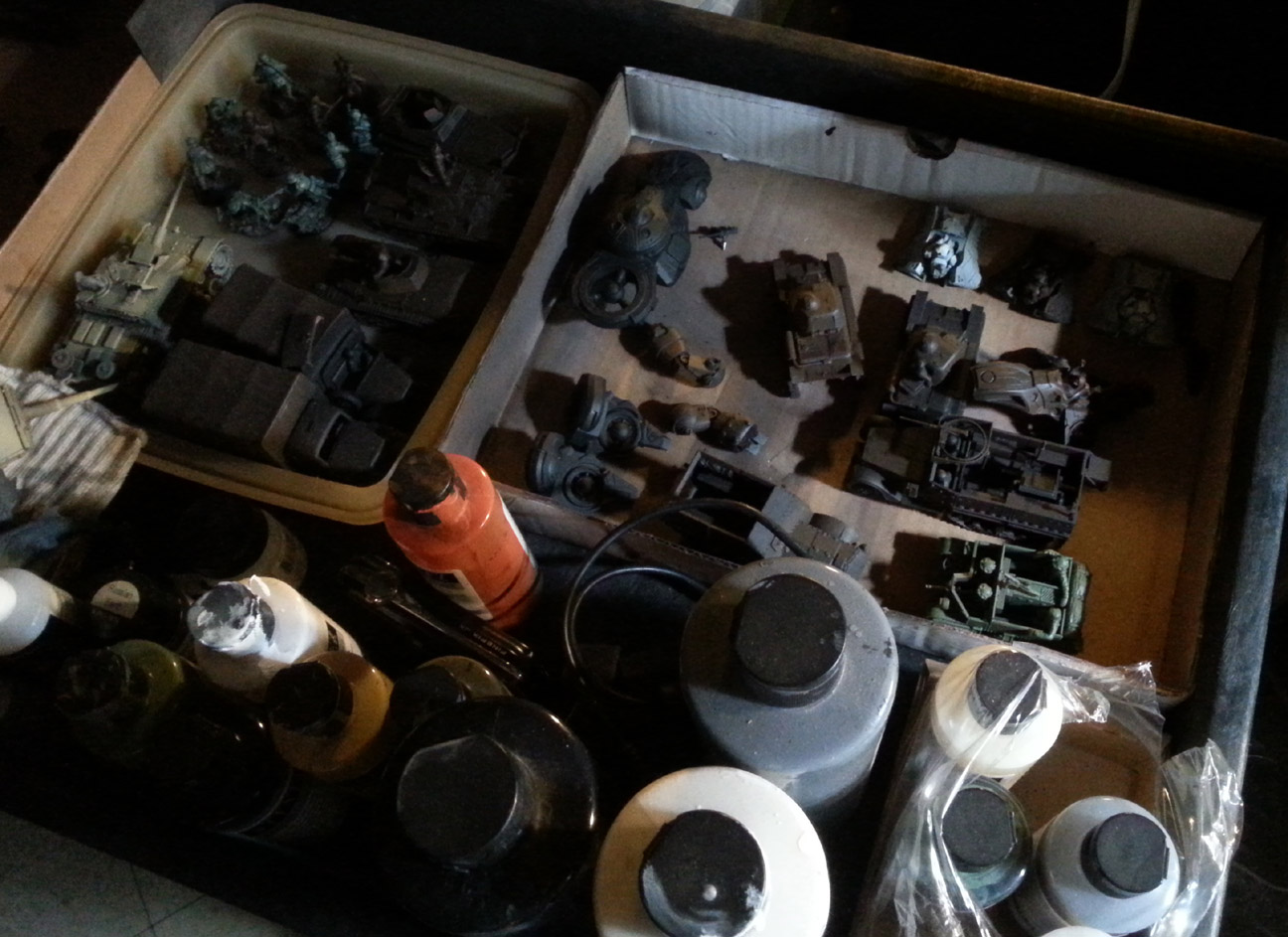 In this post series, there will be a number of different vehicles and manufacturers.  There are Warlord Games tanks, Rubicon and Mad Bob's included.  There's even a Konflict '47 mech in there!

Starting with the black/orange primer blends, I did my darks and "pre weathering" as I normally do.  Since Badger makes so many different colors of primer, the vast majority of my painting is done with these primers.  You can check out those other articles in the airbrush section.

Over those darker tones (you can see those in the image above), I spray the green primer mixed with a slightly darker olive green paint. 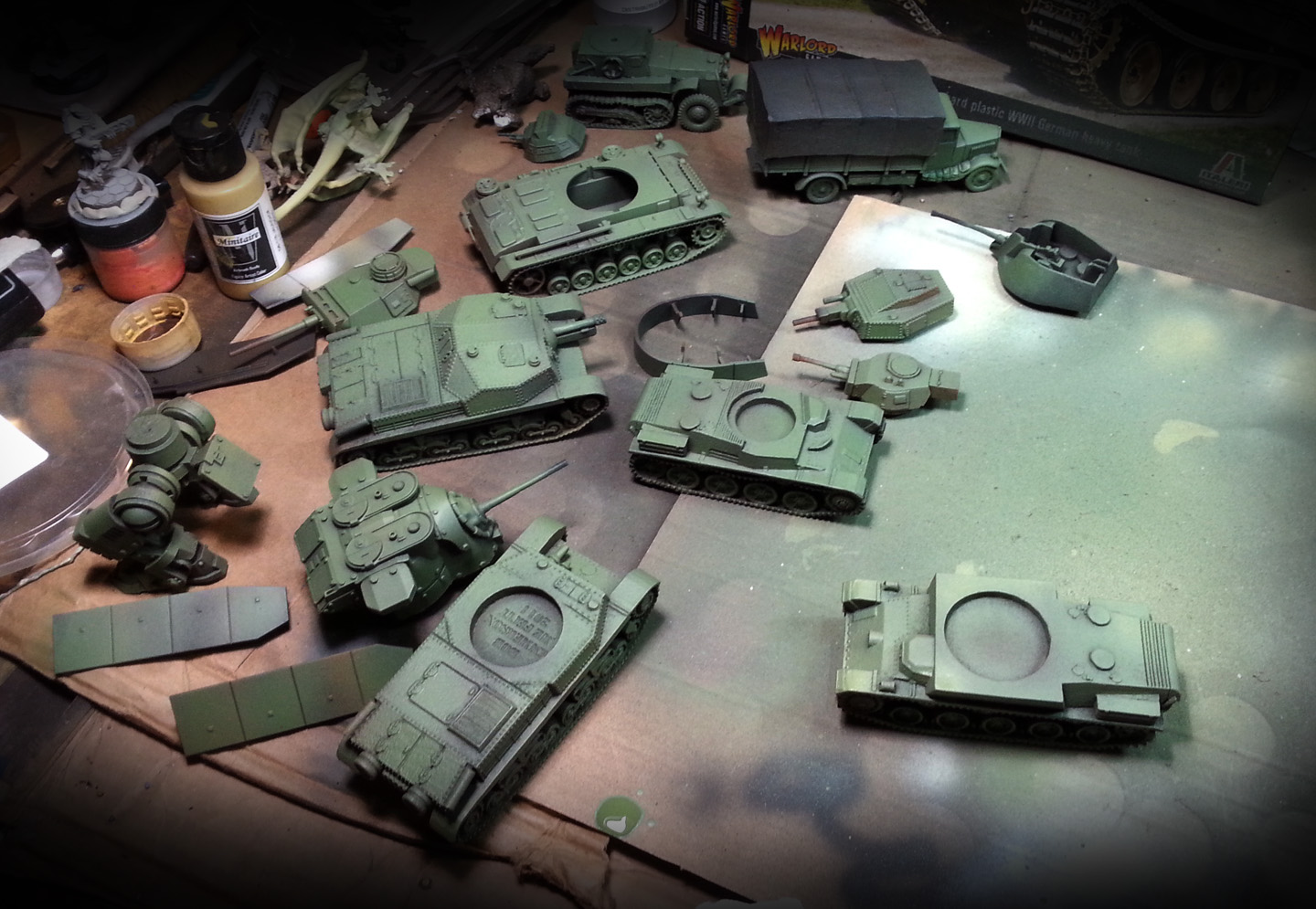 The light yellow primer color is mixed in with the green to begin establishing some lighter colored areas.  The inset shows a Stug and Tiger which got the yellow treatment.  This is another reason why I need such a large staging area, because I am trying to maximize the use of every color.

Starting and stopping again while working on just one or two tanks at a time would not be a very good use of such a powerful system! As more yellow is added to the mix, the lights keep getting brighter.  Keep in mind that you have to make the colors lighter than you want them to be in the end, just like the regular Shaded Basecoat!  You will be adding darker glazes and washes, plus weathering.  This means you need as light of a base as possible.

I even managed to sneak a French truck into the mass of vehicles!  You can really see the brighter yellow at this point.  Since I am not washing out the cup between layers, it maintains a grayish appearance. 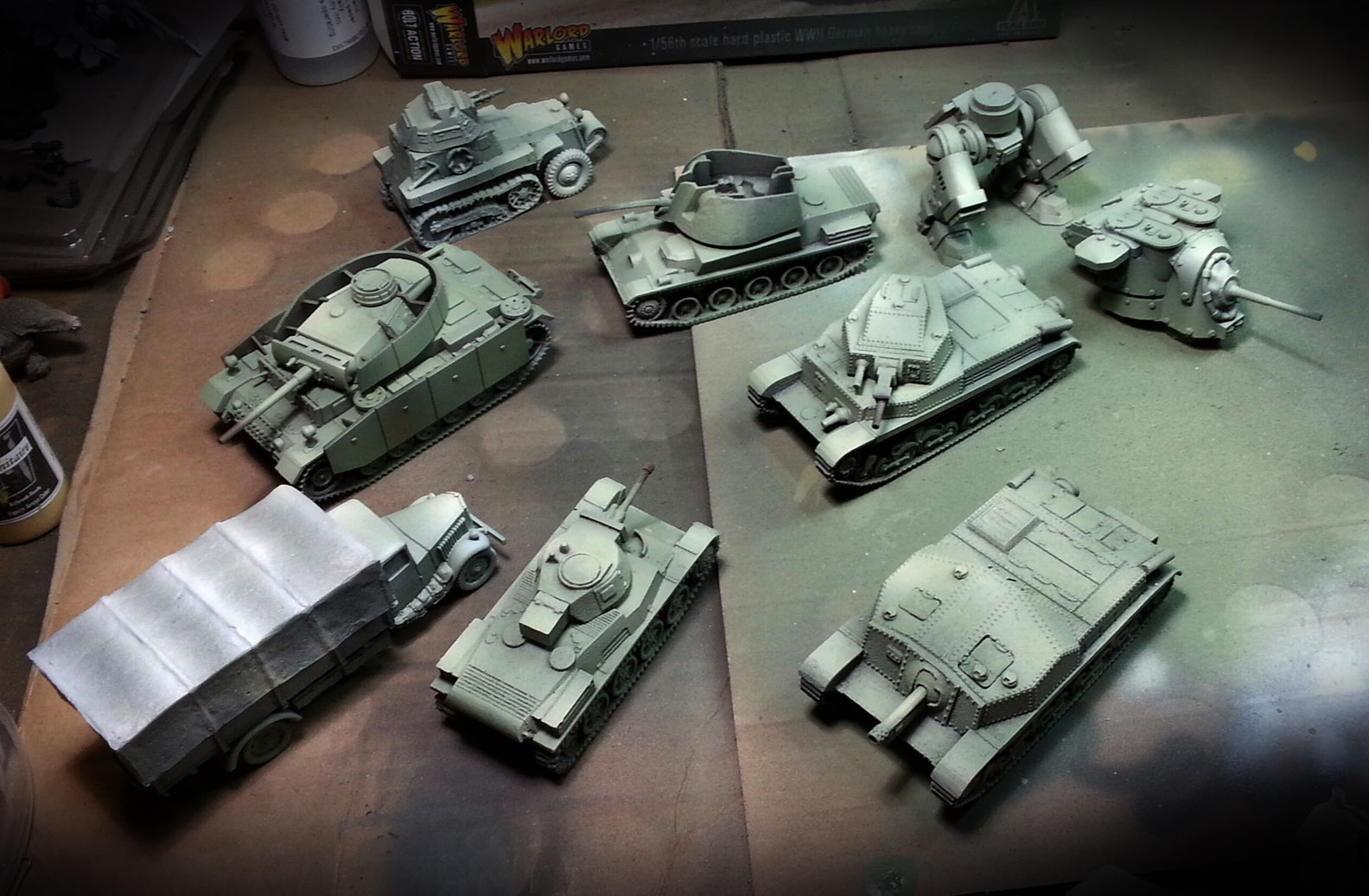 You are not limited to working lighter only!  If needed, you can go back in with darker tones if you need to reestablish a shaded area, or tint something a bit.

I think this shows up most on the aft deck of the Tiger, where I wanted to see what kind of exhaust soot I could create by lightly spraying black over that zone. 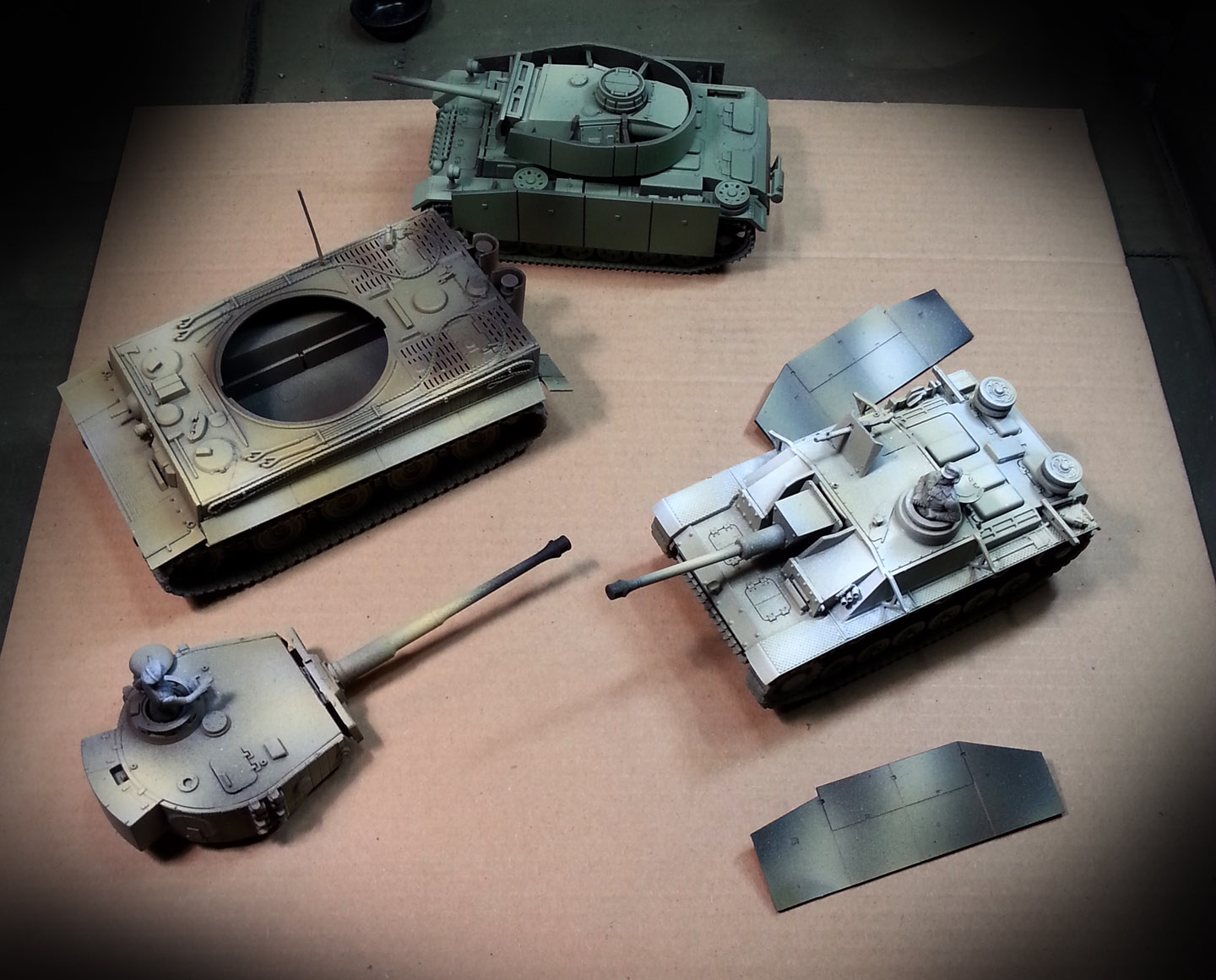 To create the camo pattern, I started with the brown, and that's a mix of the orange and black primers (from Badger).  Like I mentioned in the beginning, I want as many layers to be primer as possible, since there is no base to grab onto these vehicles!  It will make the paint much sturdier in the process. 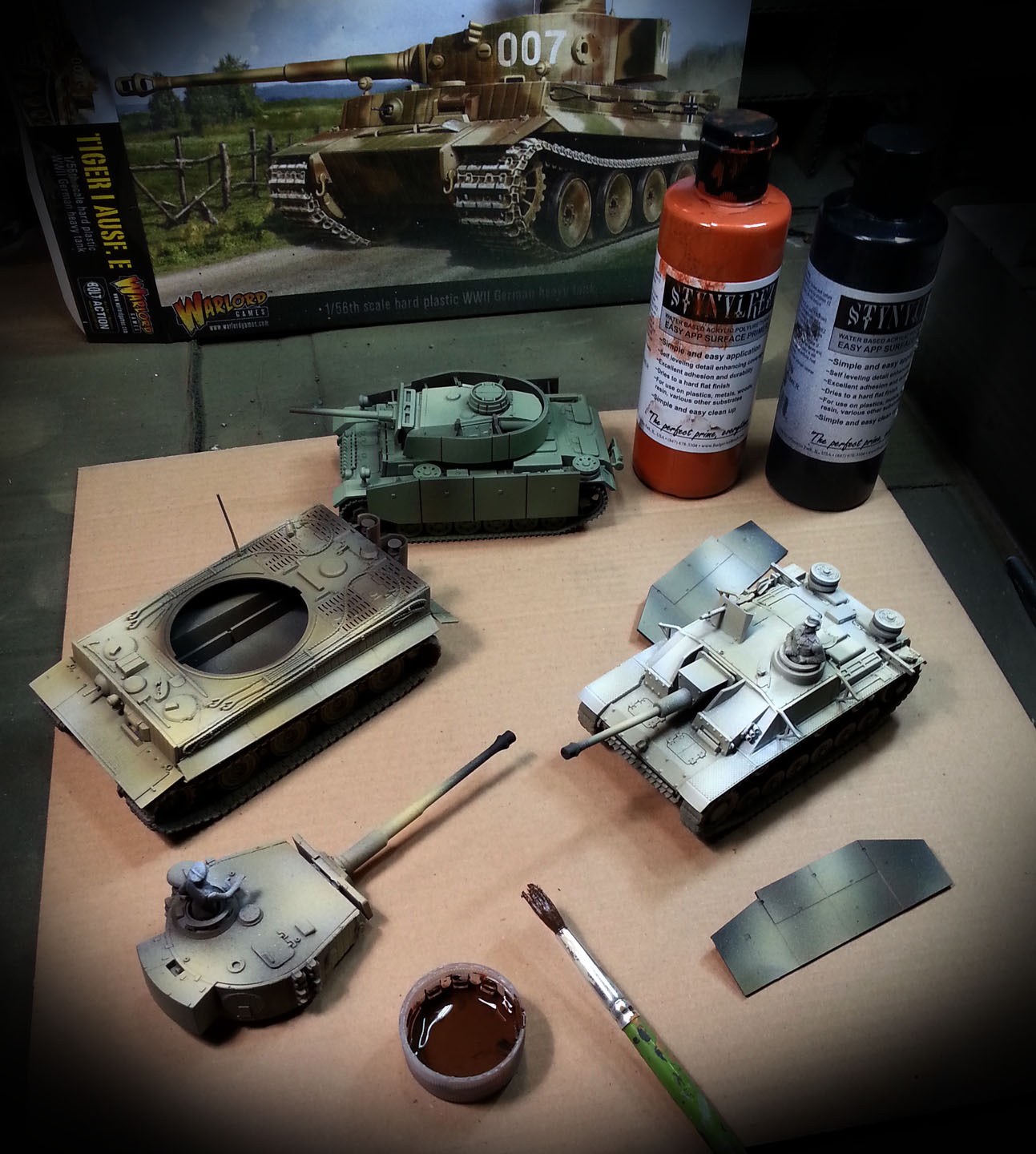 The mixed paint is placed in the cup, and I start spraying that part of the camo as needed.  If I want a sharp edge, I could apply some blue tac or other masking agent. 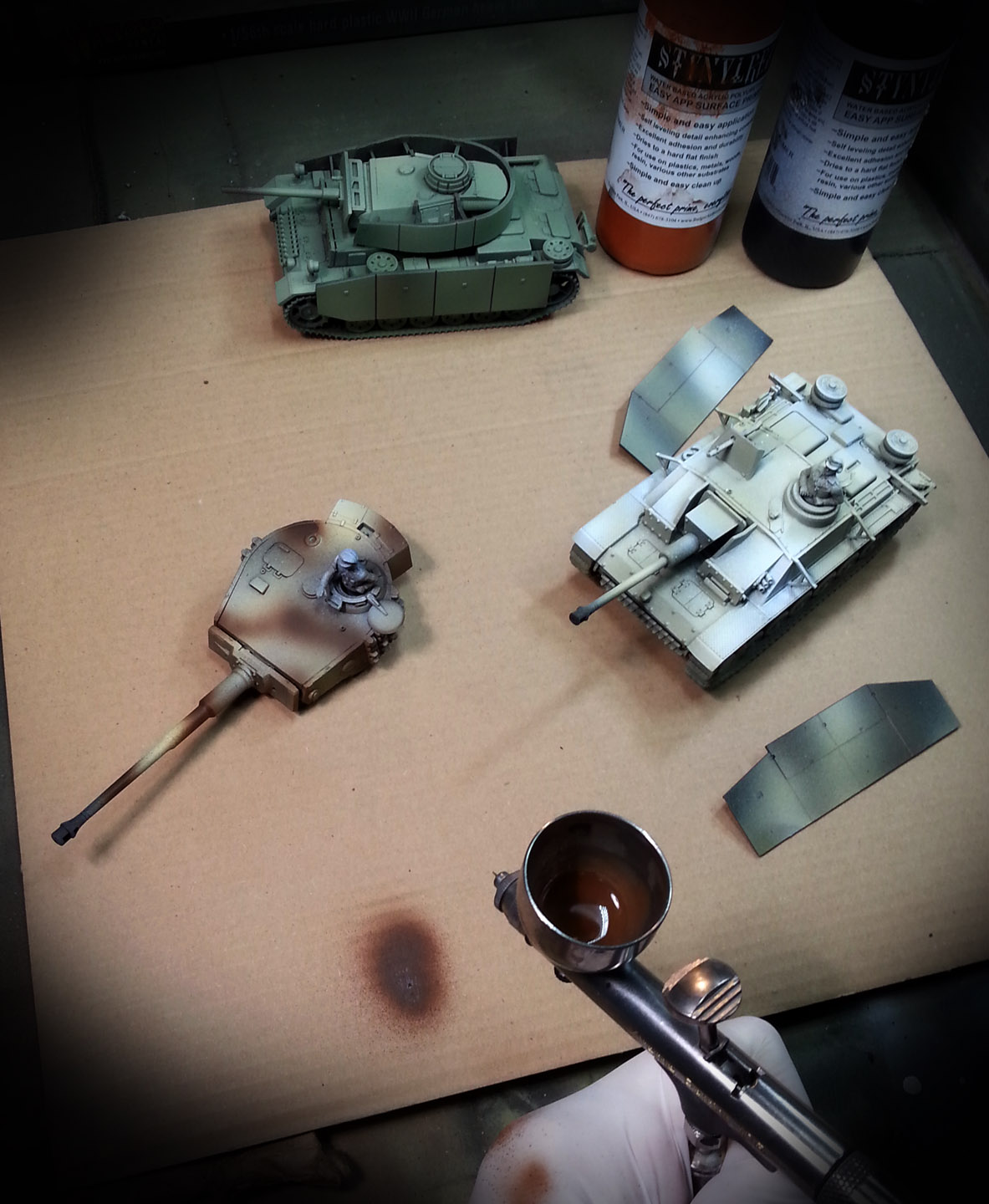 Quite a difference already!  I have carefully set up all the other vehicles in this set to be ready for painting this stage.  The Stug is ready for it's camo... 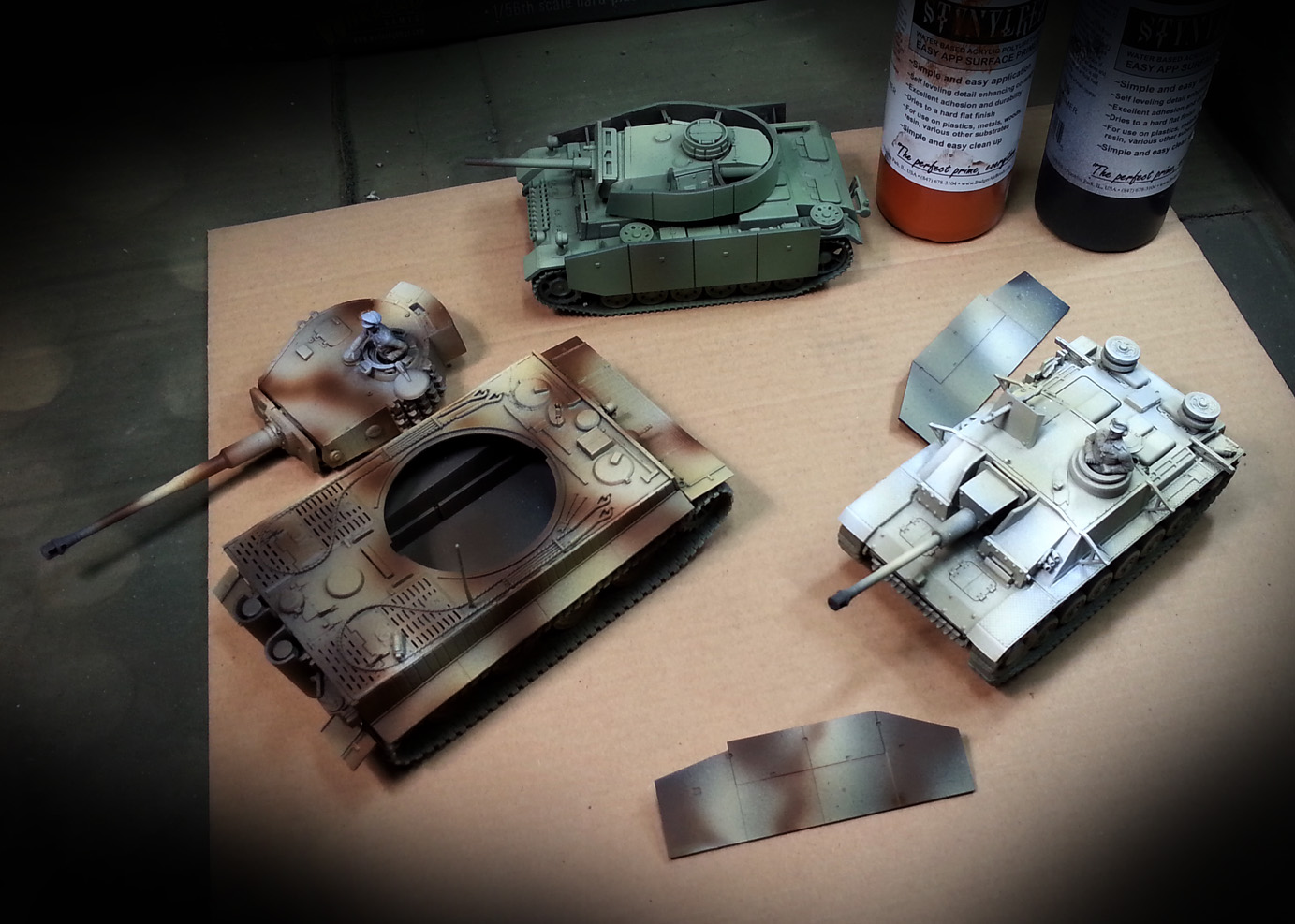 I tried to leave zones for the green part of the pattern.  Also, I was trying to leave the "leading edges", or other parts that would get chipped, scraped, etc., with the lighter parts of the pattern.  It's a lot easier to have your chipping and rust show up on the lighter colors, so isolating those zones lets you get a lot of chipping bang for very few bucks :-) 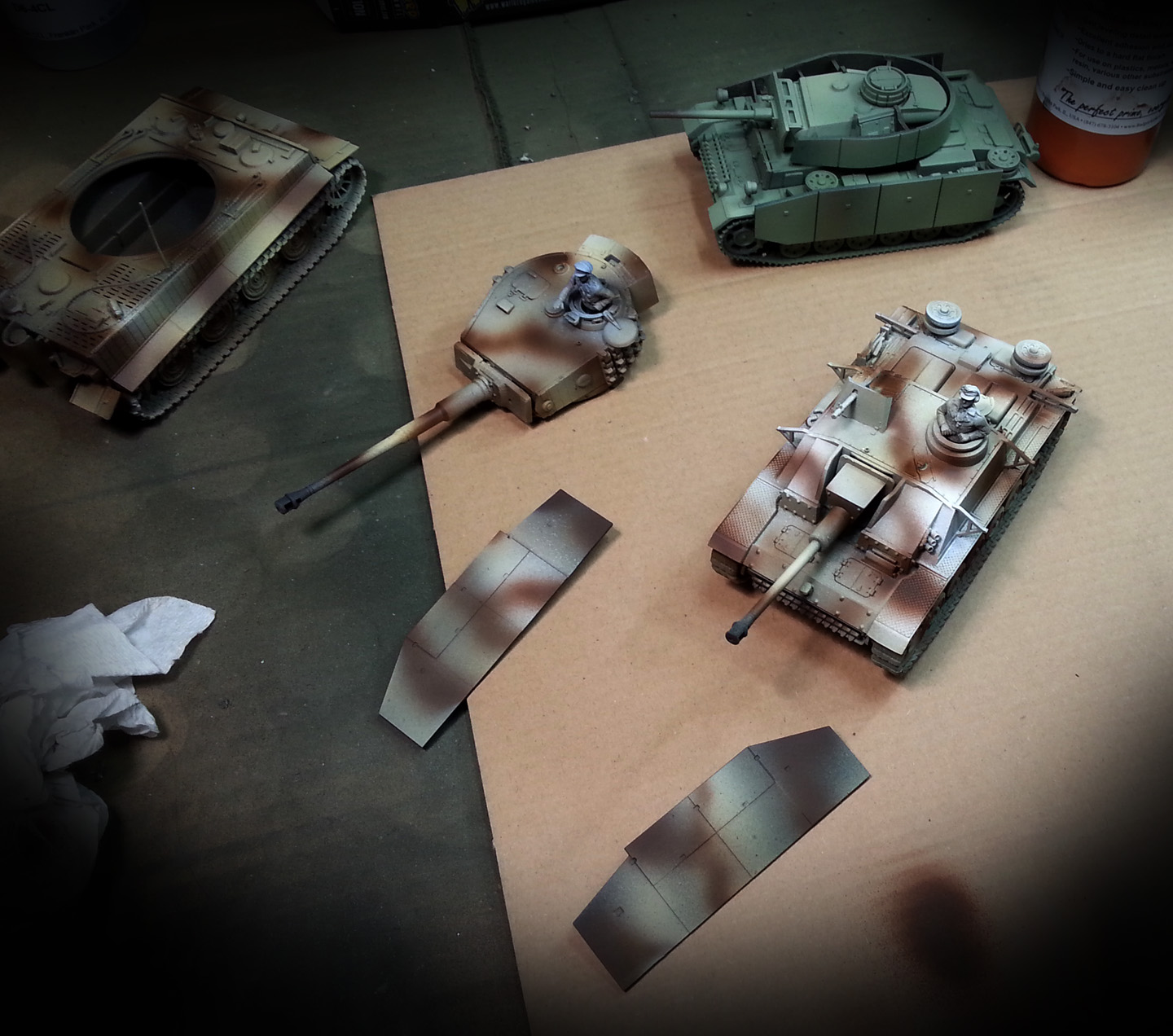 And now for the green vehicles.  By the way these are for my Hungarian army.  Most of them are from Mad Bob's Miniatures, but the PZ III is from Rubicon. 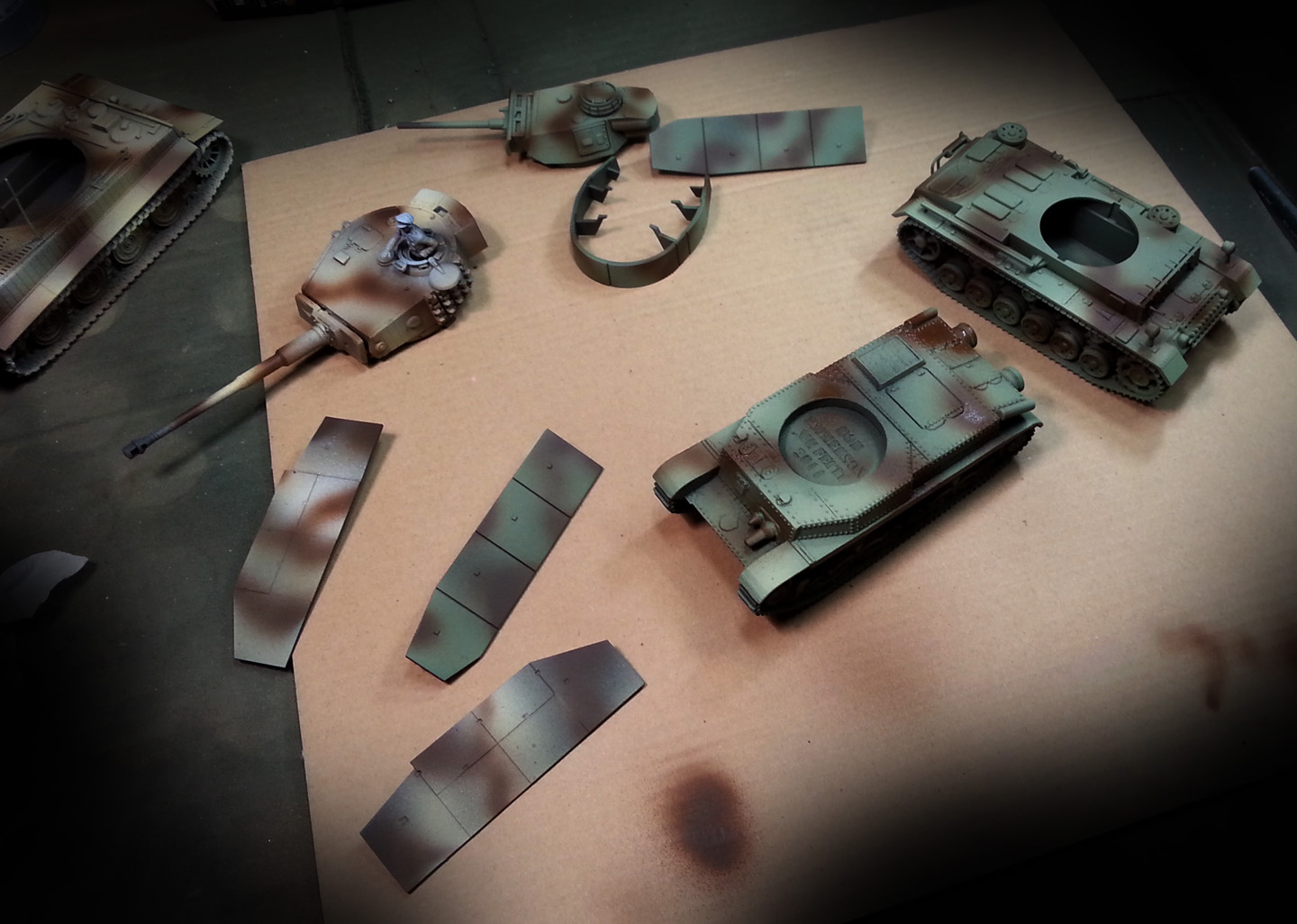 This view starts to give you a sense of how many things are finding their way in front of the nozzle!  Not only is this very efficient at getting a lot of things done rapidly, there will be a lot more consistency across the entire army. 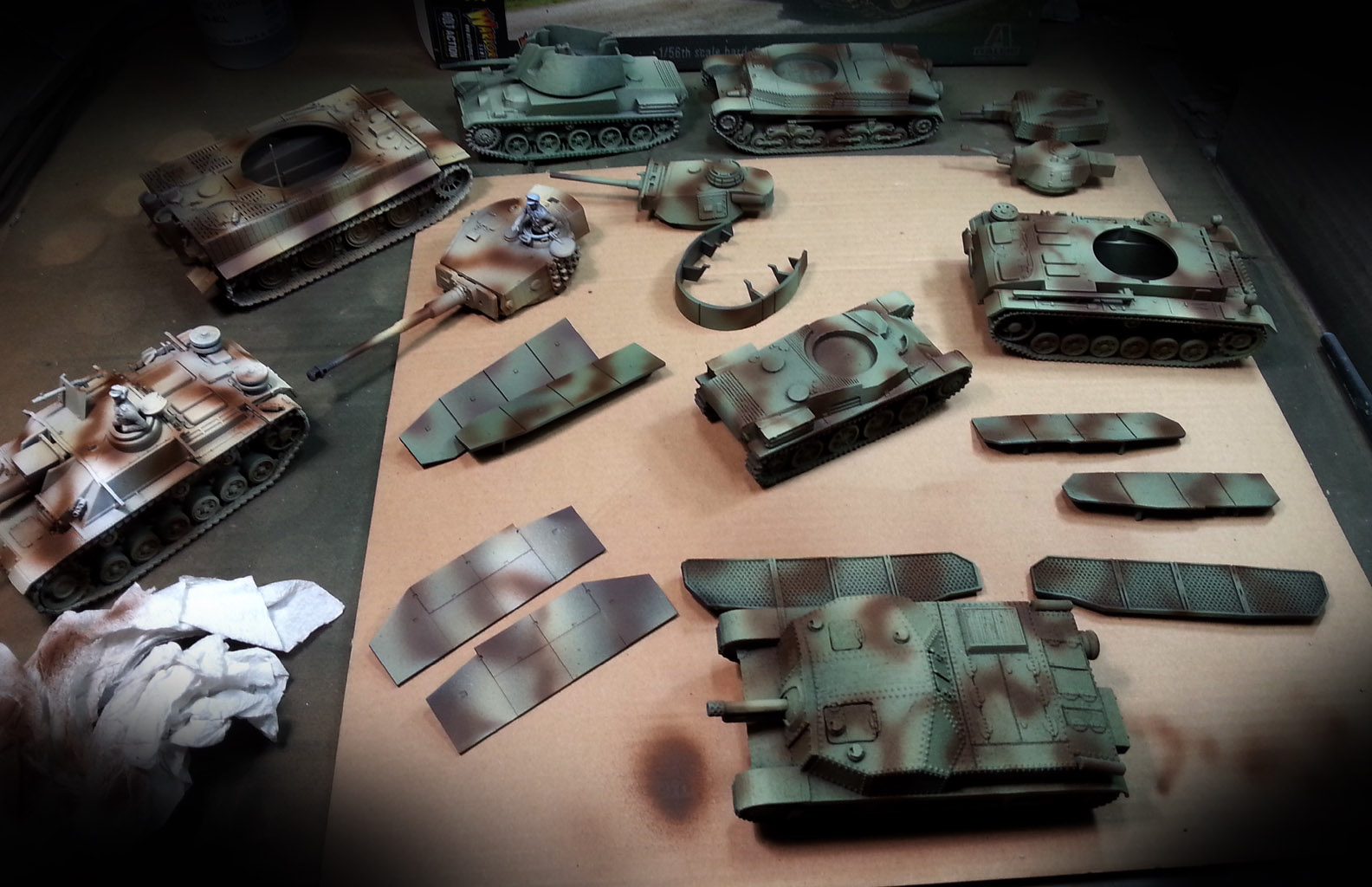 At this stage, all of the vehicles and the extra armor have the brown part of the camo applied. 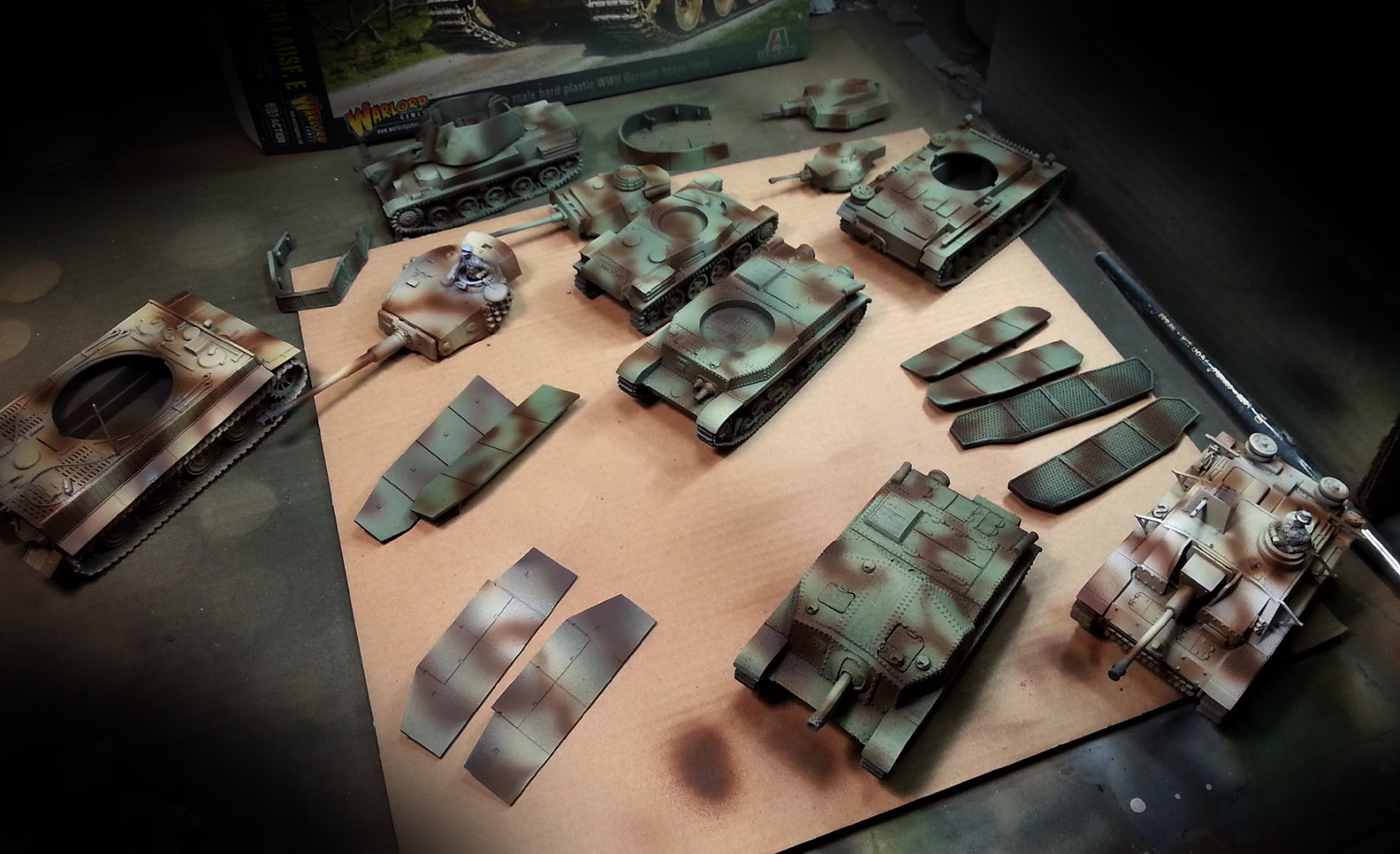 I will close out this first article with a peek at the next stage.  I will add the yellow bits of the pattern to all the Hungarian vehicles, so stay tuned!! 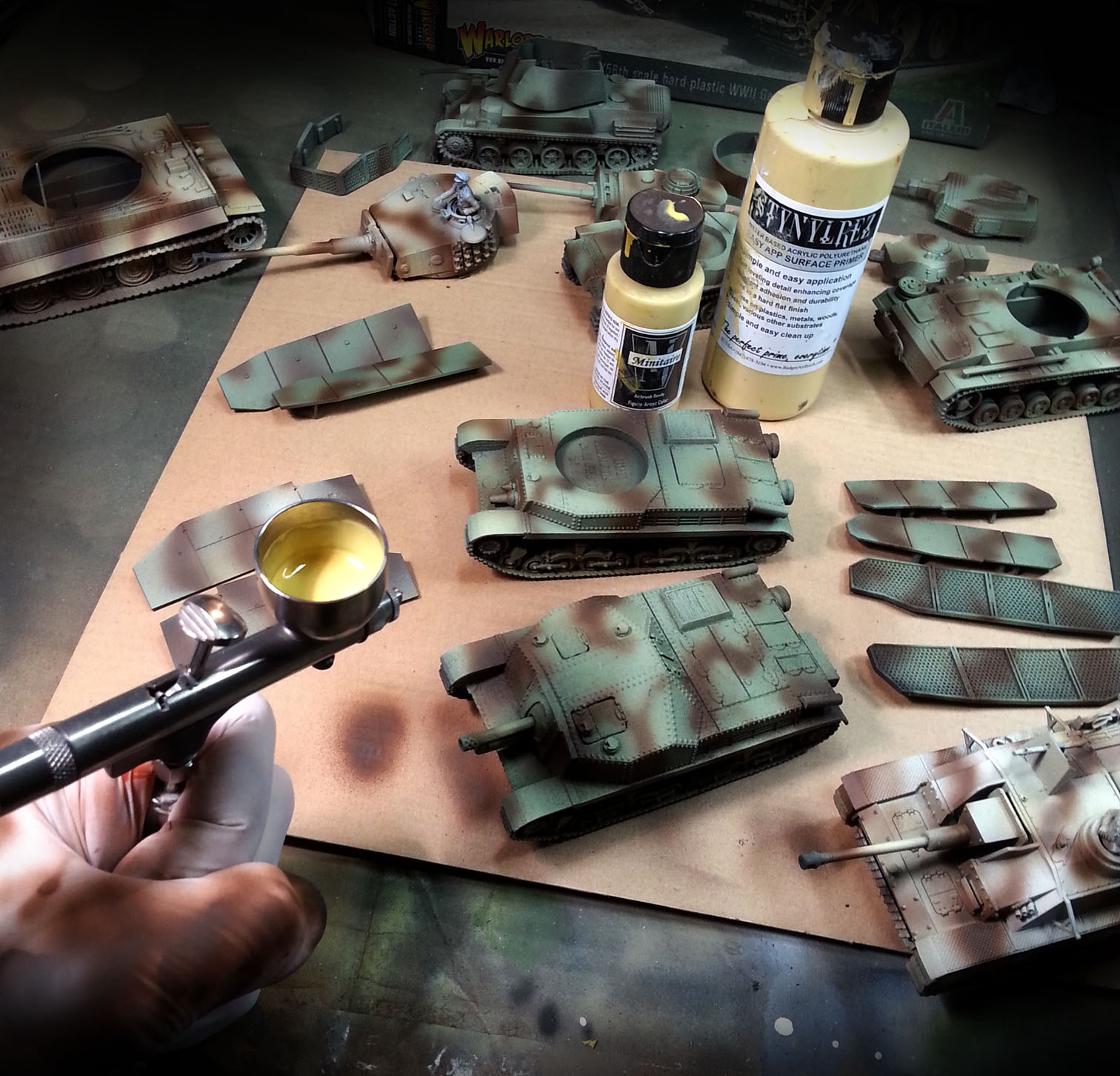