Lets get the story... 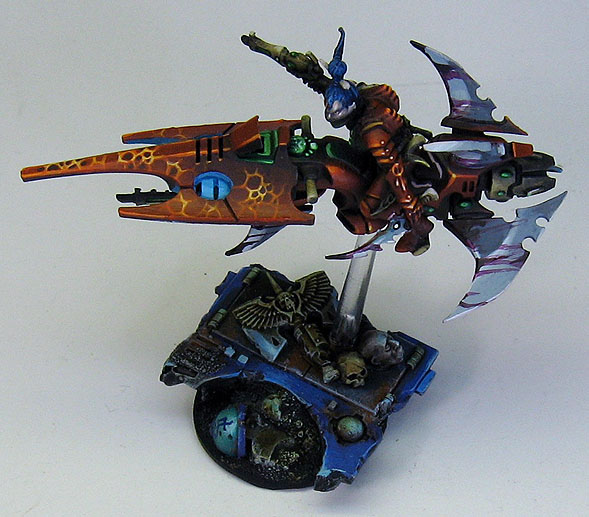 All right, one more post before we head out! 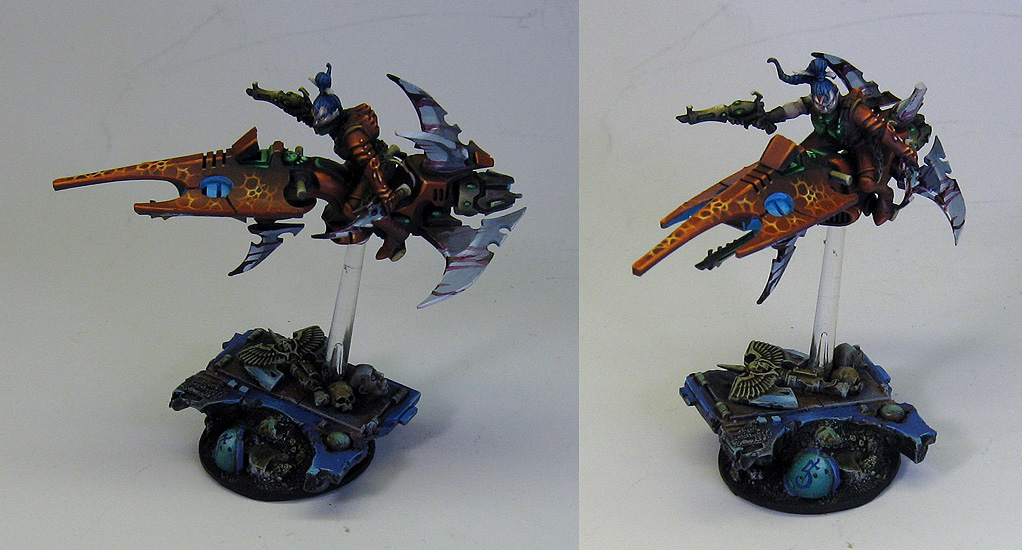 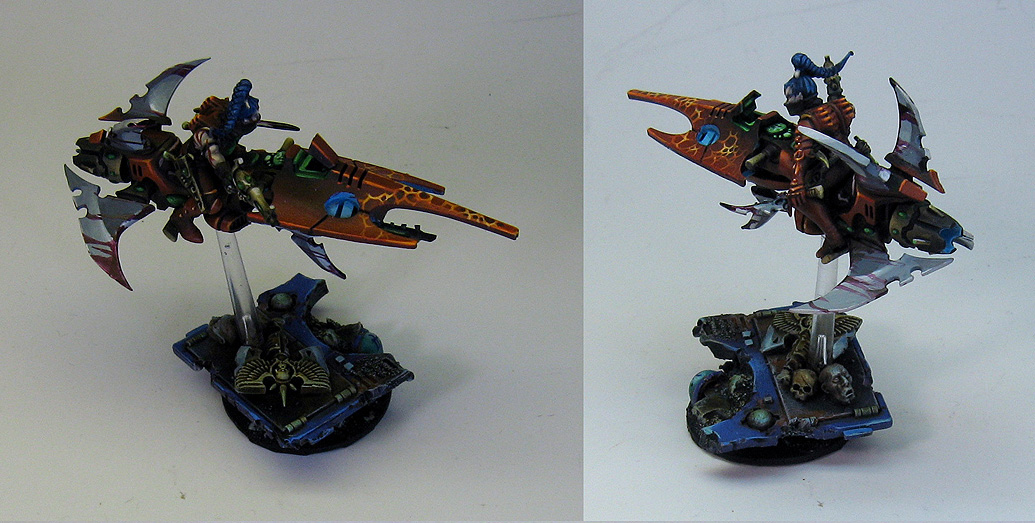 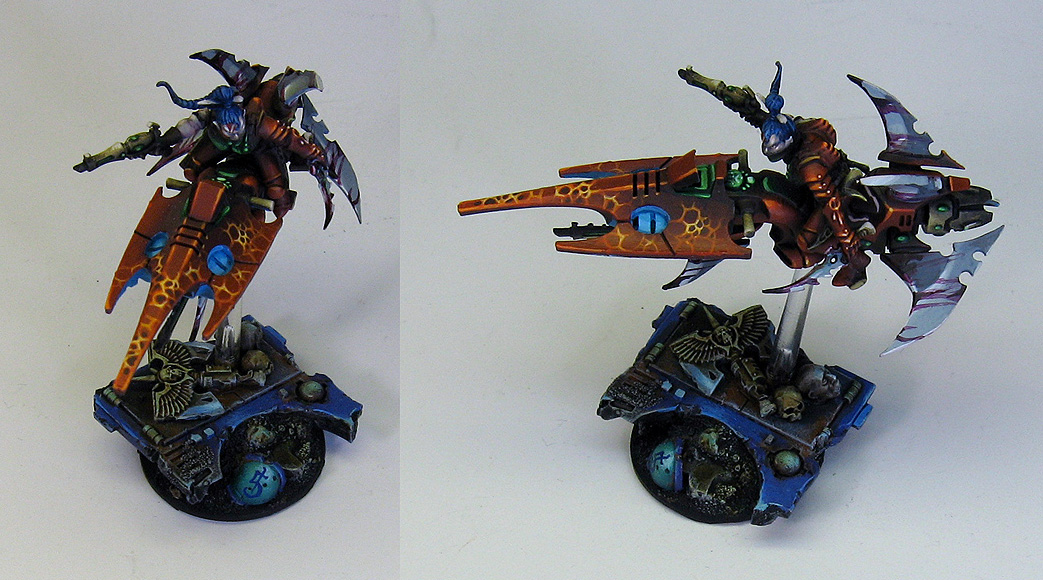 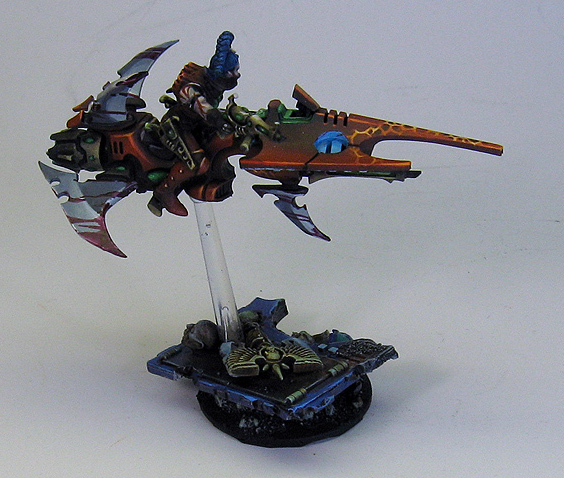 Here is the story of the army.  Not as long as originally planned, but it still gives you the gist of what is going on.  When you see the army board, it will really tie in!

The Screams of Anara V

The screams have never ceased since the day they came.
They arrived, tearing through the very fabric of the universe itself.  The sounds which I heard echo constantly in my tortured mind.  The tragic sounds that heralded our destruction.

That day had been much like any other.  I had joined my fellow courtiers at the Basilica Canus early, and we eagerly awaited the entertainment which would be provided in the Arena.

The usual prisoner executions held little interest for me, as all too many of the condemned groveled and begged for mercy.   After all, we had no need for rebellious slaves.  My old friend Gratus had a particular love for this, however, and he took every opportunity to laugh and jeer at these dregs of society.  He had even sent many of his own personal slaves to the Arena for his own satisfaction.  So, I joined him, even though I would not waste my own slaves in this manner, as I found them far too useful.  He would have been upset if we all did not enjoy it as much as he.

Once the executions had run their course and the various implements of their demise had been cleared away, the Great Hunts began.  The floor of the Arena had been temporarily transformed into the primordial forests which covered nearly all our world, so long ago.  Far before the Emperor, long may he rule.

My own senses were focused as into these ‘forests’ would be released the Mutants and the Heretics.  These infections on our own purity would soon be hunted down by the Canines, the dire beasts that once stalked every corner of Anara.  Nothing thrilled me more than to see the symbols of our own heritage search out these abominations, cleansing our world in the process.  The beasts relied not only on keen eyes and sense of smell, but a capacity to detect fear.

I saw these Heretics attempt to hide themselves, believing that they could be safe in their refuge for a time.  To the Canines, no refuge was safe, no manner of camouflage offered reprieve.  I observed the beasts close in on the misguided fools, as they could not hide their fear.  It drew the Canines ever closer, until that final, wonderful moment of the kill.  The pack howled their satisfaction as well.  Is it any wonder that these tremendous killing machines are trained by our own warriors as warbeasts?

The subsequent races did not have the same appeal to me as this cleansing of the depraved and unworthy in our society.  I felt that merely watching the great creatures chase each other around the Hippodrome was tedious at best.  What good did this do?  I watched the crowds roar and groan as ‘favorite’ Canines fell to their own kind, tearing each other apart in a mass of fur and blood, while others raced ahead to the finishing post.

Tantul and Boleus lost a great deal of coin and credits on this particular occasion.  They were both working on the explanations for their lighter financial accounts to their spouses when the skies tore open.

From these rifts emerged what looked like great flocks of birds.  At first, the throngs gathered in the Basilica thought that it was a new form of entertainment, and their initial shock was replaced by cheers of approval.

These ‘birds’ gathered into larger and larger groups, some of them large enough to blot out the suns.

When the first beams of destruction screamed forth from the larger craft, rocking the entire stadium, the mood of the crowd instantly turned to panic.  Smoke and fire could be seen throughout the city.  The terrible energy cut through ceramite and plasticrete alike with little issue.  We saw countless thousands of citizens outside the stadium scurry in a panic before the onslaught.
The larger groups of flying objects started to split off into smaller groups, plunging down towards the street levels.  We could see them more clearly now.  They looked like predatory birds, with angled wings.  Vast numbers of those fleeing were cut down by strange blades protruding from these wings.  In just a few terrible moments, these blades were stained with the blood and gore of slave and citizen alike.  The screams of the fallen were now mingling with the high pitched screech of the engines and the awful scream of the energy beams.

Gratus screamed, “What sort of demons appear from the skies?”  Tantul cowered in fear near one of the exit ramps.  It was shocking to see the tortured expressions on their faces, not so unlike those of the slaves Gratus had sent to the slaughter.

My thoughts shifted to my own family.  Had the invaders reached my villa?  While it lay far from the Basilica Canus, I knew instinctively that I must reach them.  Just as I ran from the Hippodrome, the great canines, no longer under the control of the now vanished gamekeepers, leaped into the mass of terrorized citizens.  They had little trouble sensing the fear and panic of the throng, and their great jaws watered in anticipation.

Gratus managed to make it to the streets with me, but Tantul had been overcome by one of the rampaging beasts.  Together we pushed and shoved our way to a transport, which was frantically attempting to take off.  There were several slaves before us, which were dispatched by a few guards.  I was pulled aboard, but Gratus, being much heavier than me, could not be brought on board.

The transport sped off, as far from the horrid scene of destruction as possible.  As fortune would have it, it was in the direction of my villa.  As we moved over the city, more of the strange rifts opened, and even larger birdlike apparitions burst from the maelstrom.

These new invaders promptly engaged the Legions of the Broken Blade, who had already been mobilized according to the frenzied vox broadcasts.  Great missiles launched from these machines of death landed amongst the marines, and great plumes of sickly green smoke rose from where they struck.  The resulting explosions seemed quite small, but marine and canine mount both fell a few moments later in horrible death spasms.  What kind of toxin could circumvent the marines’ armor?

More reports came over the vox.  Hideous humanoid creatures the size of Ogryn were seen grappling with canines and marines, displaying strength that was beyond even their great bulk.
Word began to spread that Emperor Callistos had fled, and was nowhere to be found.  Other reports said that he had barricaded himself in the Spire of Separation, and was watching the annihilation of his world from there.

I begged the pilot to use the vox to contact my family.  He refuse to do so, fearing that it would attract the attention of the invaders.  Bribes meant very little as our world broke apart before our eyes, so I had to wait until we reached our destination.

Miraculously, we made it to the villa safely.  While the pall of smoke and ash was descending on the villa, I could see that it was intact.  My heart leapt for joy!  It might be possible to save them after all!

Many weeks after the Fall of Anara V, the terrible screams echoed still in my mind.  Those of the citizens as they were cut down by blasphemous toxins and razor sharp wings, the screams of the dire canines as they were slaughtered by the more nimble invaders, and the awful sounds of lance beams tearing through buildings and marines.

More terrible still were my own screams.  Those sprang from my throat as I watched my entire family slaughtered before my own eyes by these pale, slender, vile beings.  They seemed to draw incredible strength as the pain and torture they inflicted on each new victim was more terrible than the last.

Only my slaves remained alive.  It was of little solace to me.  What use did I have for them now?
Even worse, I was now shackled.  How piteous and disgraced was I, to find myself in bondage with the lowest of our now devastated society.

I did not want to look at them.  They, however, continued to stare at me.  Some in amazement, I suppose, but one looked at me with eyes that saw everything.  Eventually, he spoke.  I was too exhausted to curse him for daring to address me, a citizen.

“You wonder what brought this destruction upon you.”  It was not a question, but a statement.  “Just as the Canines sensed the fear of slaves and captives in the Arena, these beings sensed our pain, our suffering."  I could not help but look at him now.  “So great was the agony which you inflicted upon slave, mutant and heretic, it drew them from the deepest recess of the warp, as a flame does to a moth.”

This slave who dared to speak to me stared at me even more intently.  He pointed to the chains around my arms and legs, and the many scars on my body. “And now”, he said. “For as long as they allow you to live, these beings will feed from your agony, your suffering.  It will sustain them as our never ending toil and labors sustained you.”

On the final day, I was brought to the badly damaged but still standing Basilica Canus. I eagerly awaited the event in which I would participate.  While there would be a brief moment of terror before the Canines, made even more vicious with the strange drugs given to them by their new masters descended upon me, my own screams of agony would at last come to an end.

Back to the bikes! 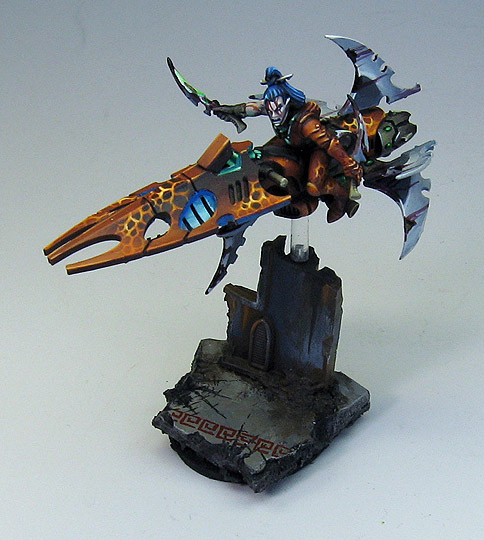 Here we go!  I tried to take as many pictures as I could of the jetbikes.  I will be posting these over the next few days, and hopefully some images of the army board construction! 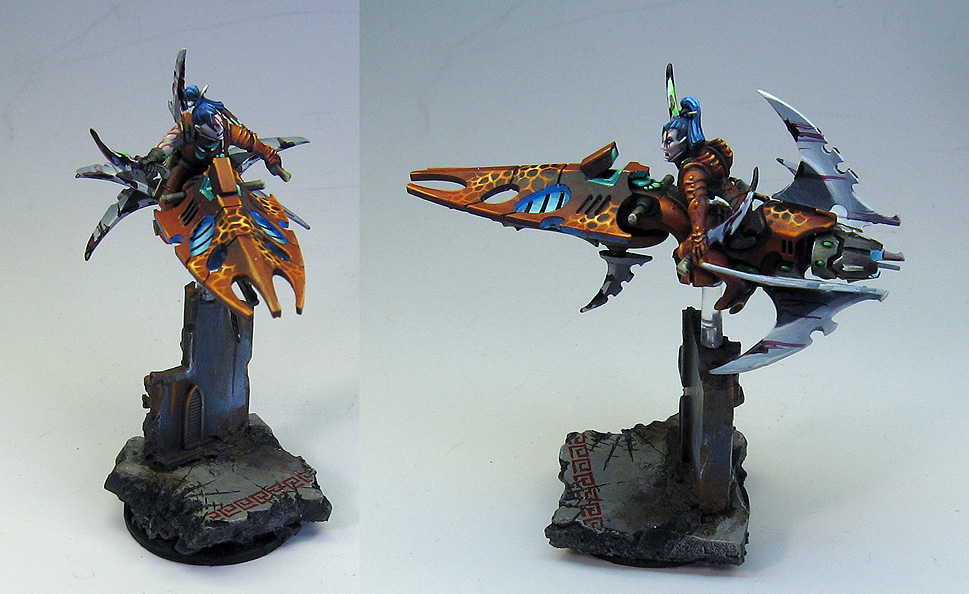 It was very neat to see (however briefly) the painted army on that board! 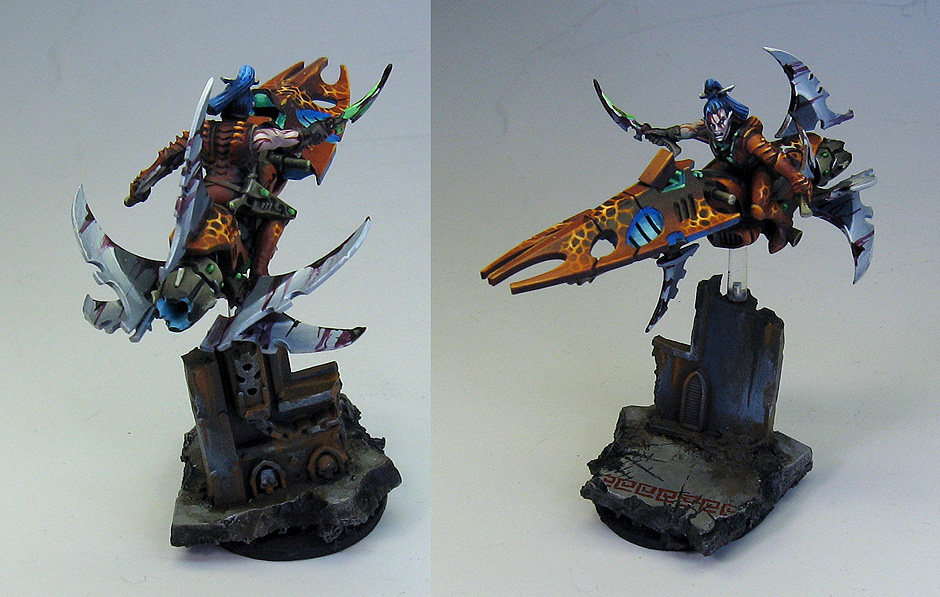 Now it's Adepticon or bust!! 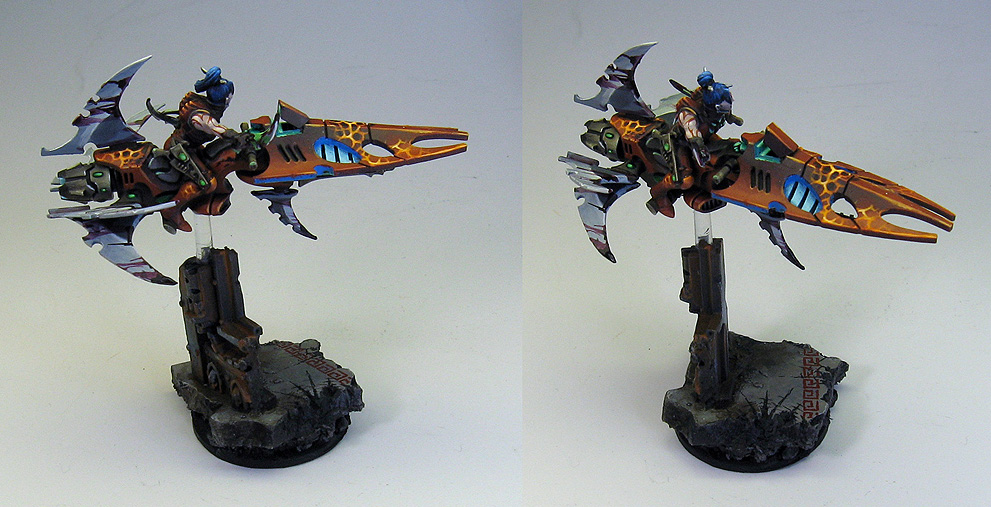 Posted by wappellious at 4:45 AM 3 comments: