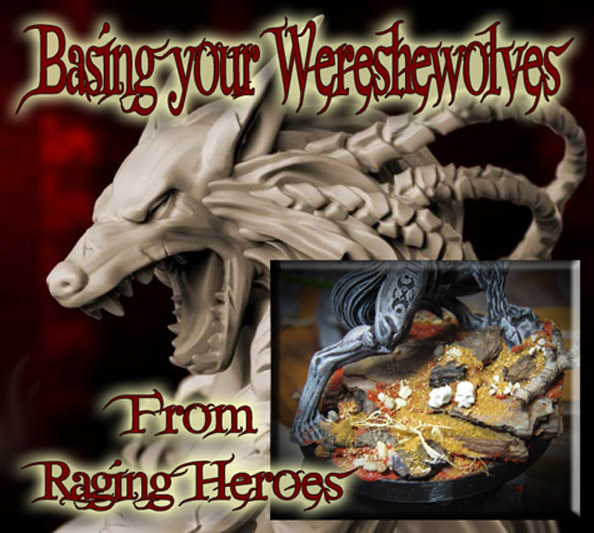 Recently Raging Heroes added some wonderful new figures, the Wereshewolves!  I will be doing a number of posts on them soon, but I thought I might dovetail this post onto the recent basing of the Flames of War French artillery.

That was 15mm scale, so now it is time for the 'normal' 28mm variety.  I wanted to illustrate how the same materials can look radically different depending on the scale of the figure.

This Wereshewolf is standing on a 60mm base.  I need to create a rock face that is on an angle, so that I can make it appear if she is climbing to the edge of a precipice.

I gathered together some tree bark, and began to "shimmy" the leading arm upward, making sure to leave space for the back feet. 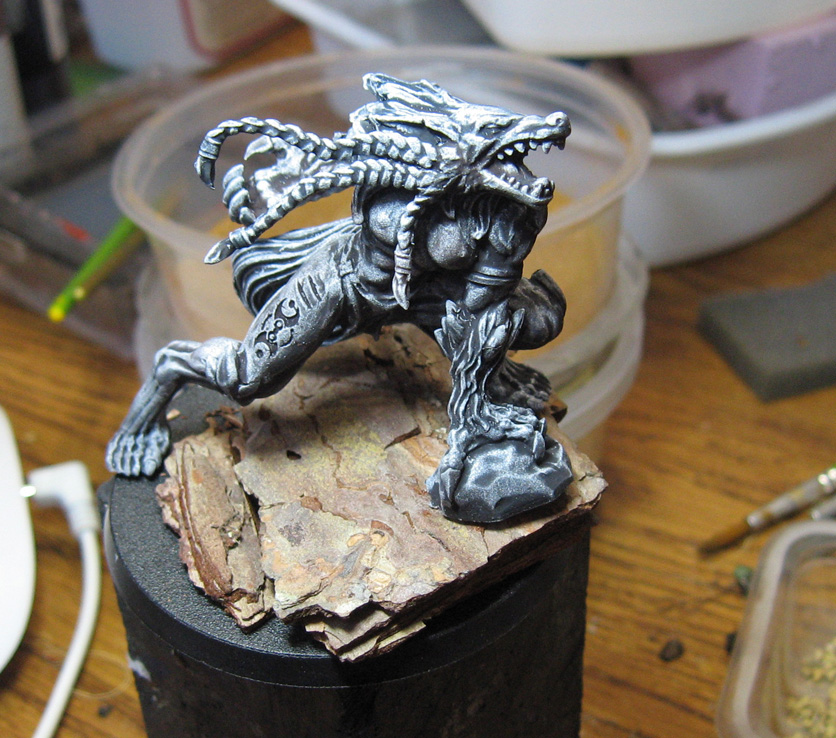 It's OK to use multiple pieces of bark to get what you need in terms of shape.  This is also why I never throw any of my pieces away! 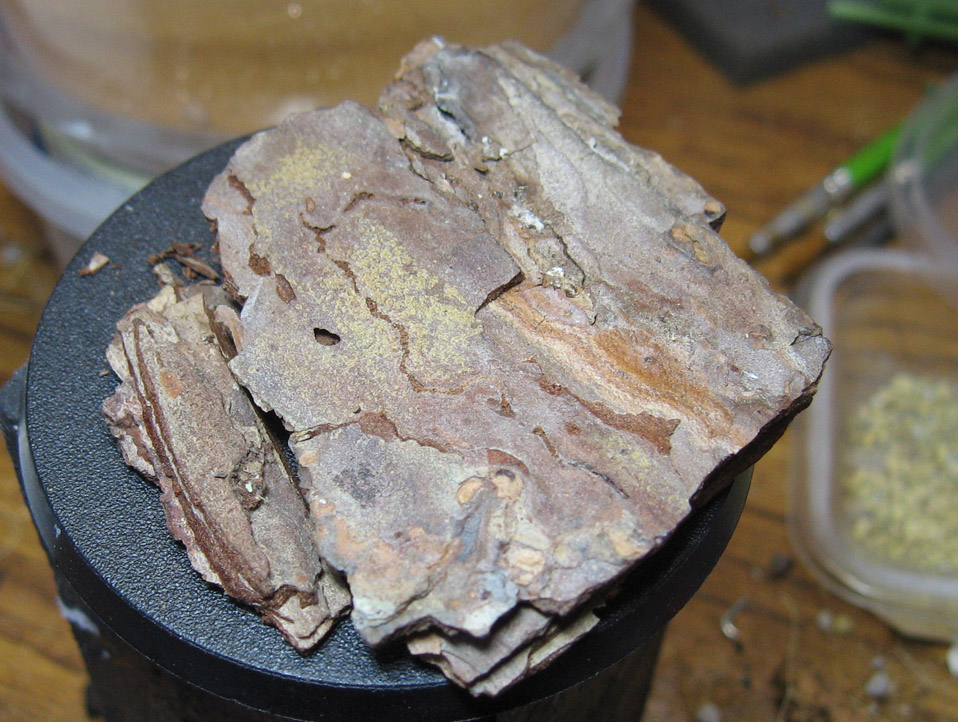 The magical Oxide Paste from Vallejo will be used as "mortar" between the layers, as usual for my "Bark and Branch" technique. 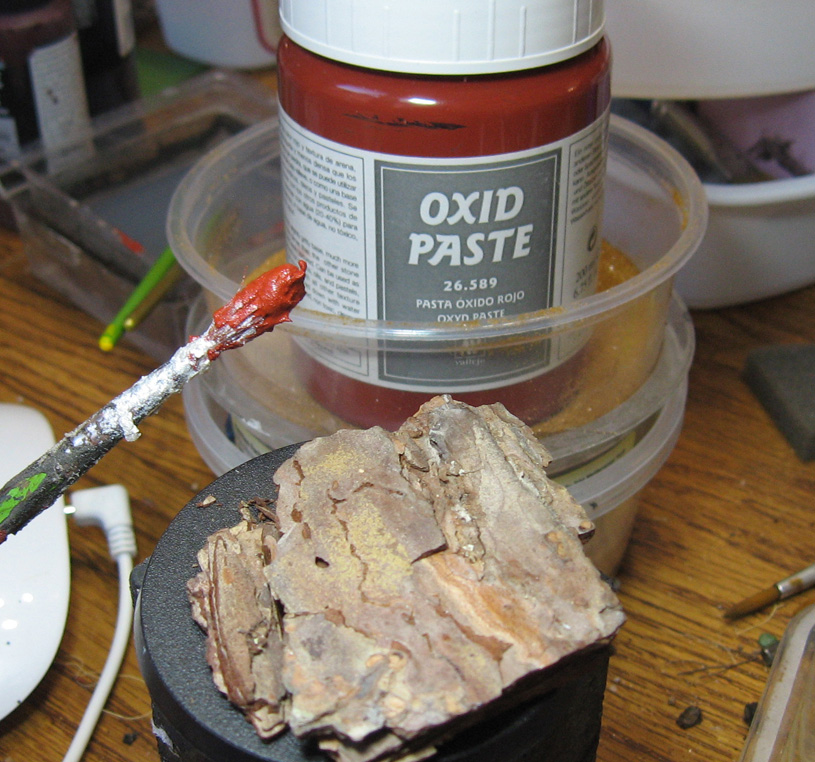 I really like this very cheap, very think super glue for this purpose.  It adds some extra holding power, dries faster than the oxide paste, and can be used for other interesting tasks on the base as well.  Did I mention that the ten tubes were 99 cents? 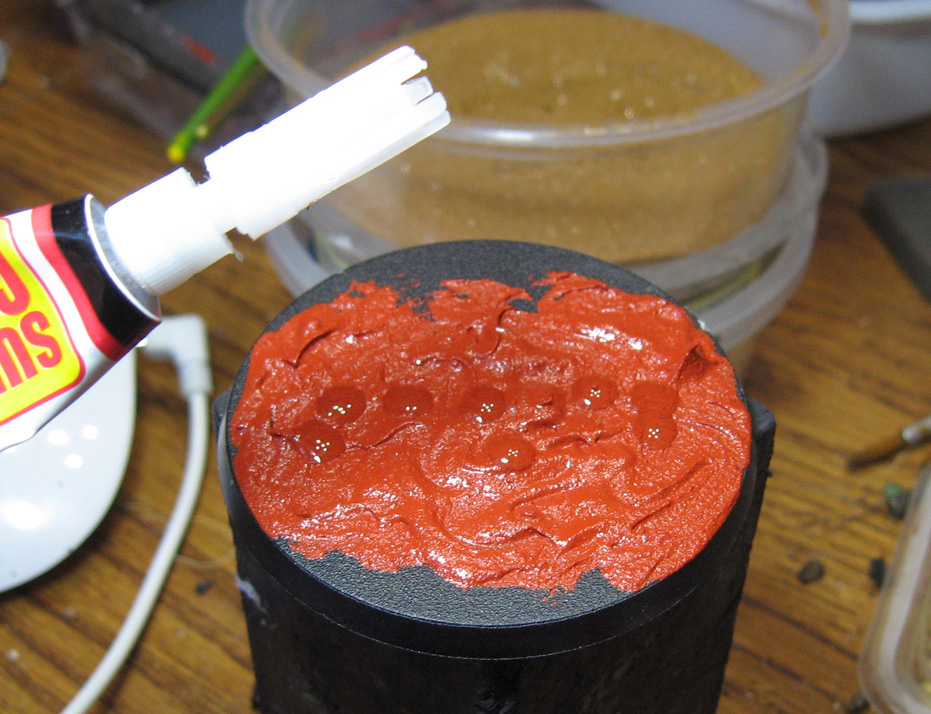 The initial layers of bark are in place, so I can now build on from this point. 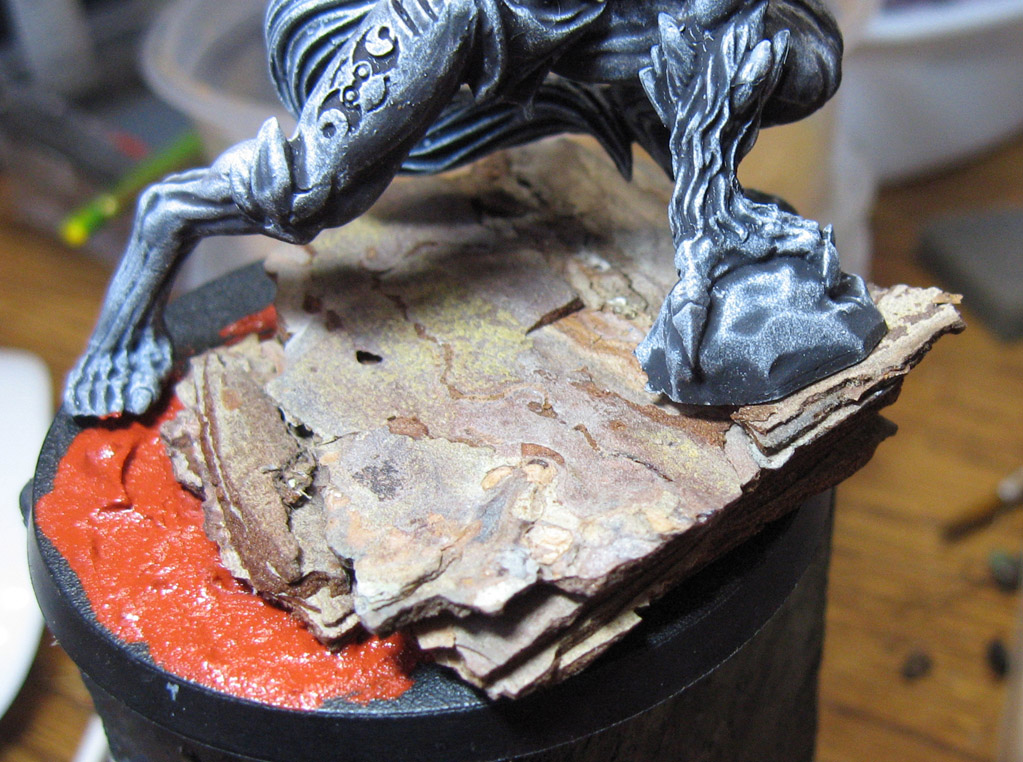 A spare piece of bark with a wonderful texture is going to fill in this somewhat boring area.  You can see the super glue here as well. 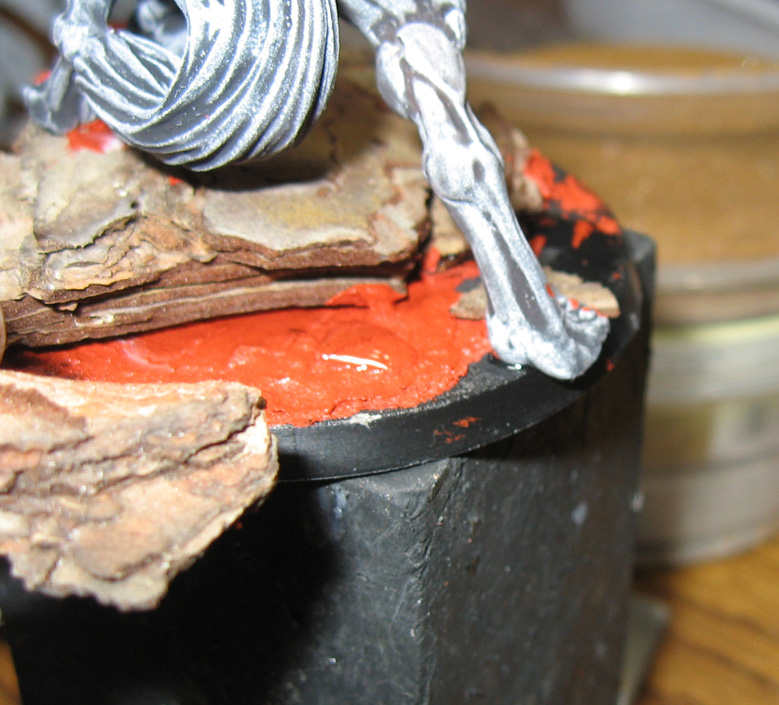 To match the texture of the rock under the hand, I used some pieces of my bulletin board cork, which can be broken up easily into all kinds of fantastic shapes.  This is the same cork that I used for the Artillery basing... and it certainly looks different next to a 28mm monster! 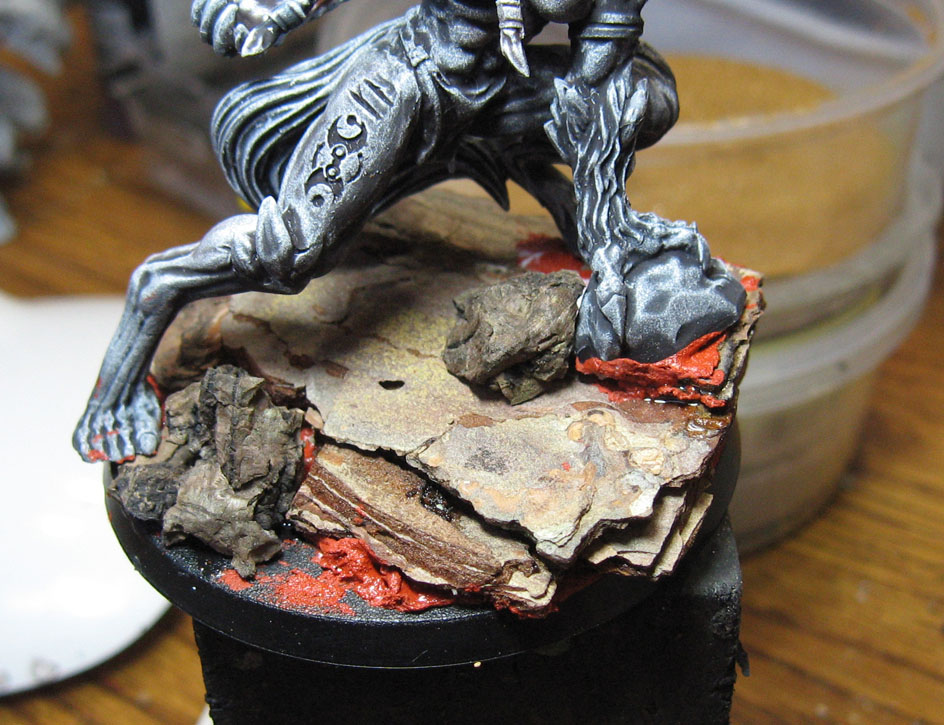 The oxide paste and glue will hold the pieces in place... 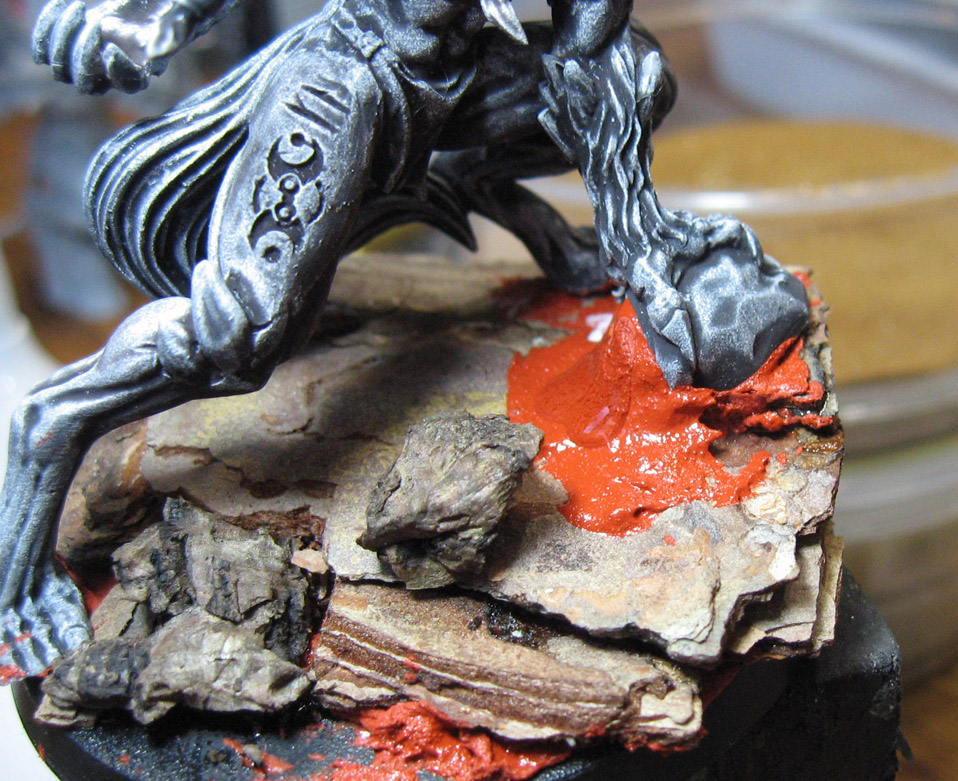 You can even brush the oxide paste over all the surfaces to make the textures match a little more closely.  In this case, I will be using some more gravel to fill in the gaps. 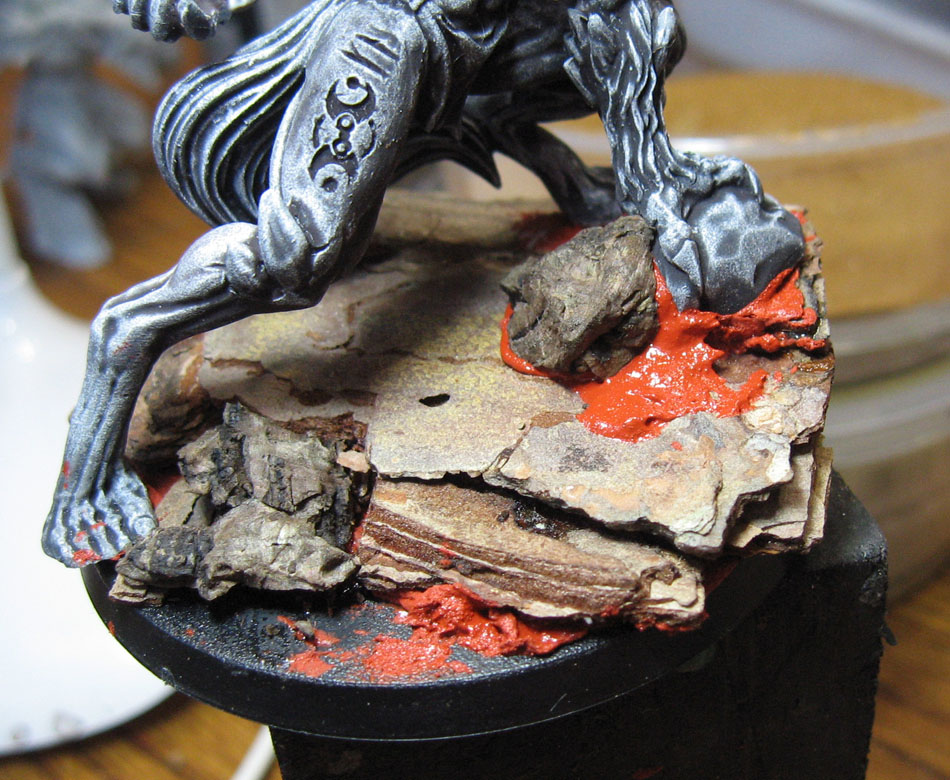 This is what I am doing on this side.  Biggest rocks first, and then working all the way down to fine sand, just as I did on the Artillery. 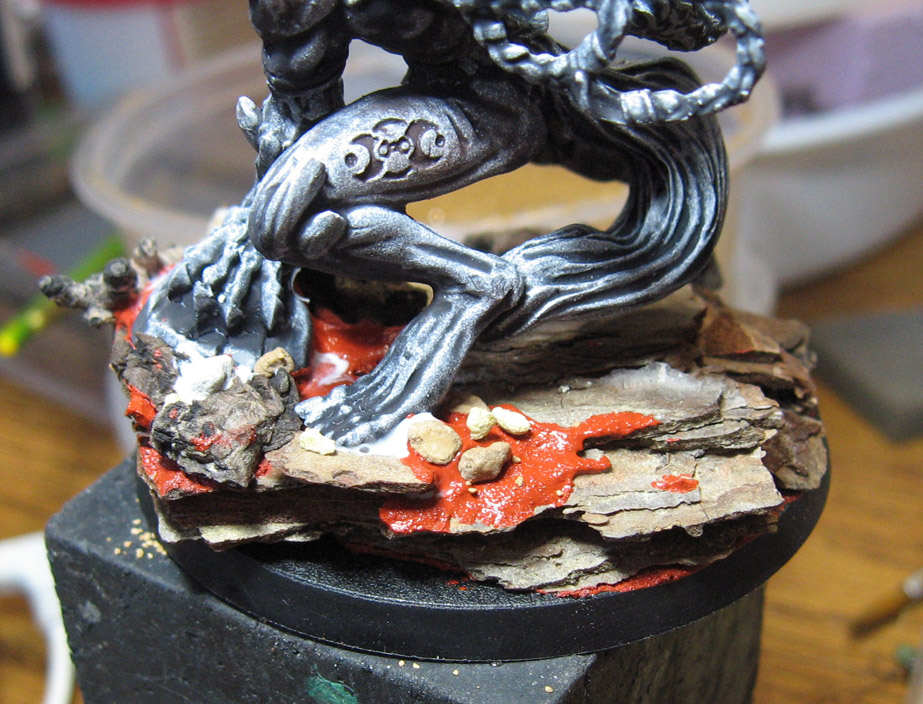 I had a few extra pieces of branch which I had broken off another piece being used for a different base.  It seemed to be just right! 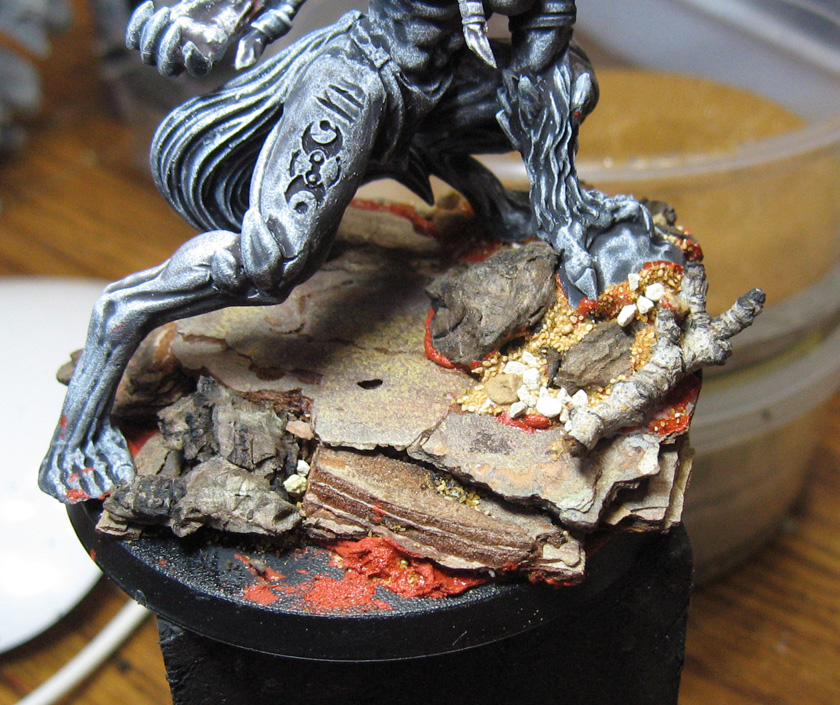 You can see the smaller rocks and finer gravel used to fill the gaps between the large stones.  More to come on the Basing Your Wereshewolves, so stay tuned! 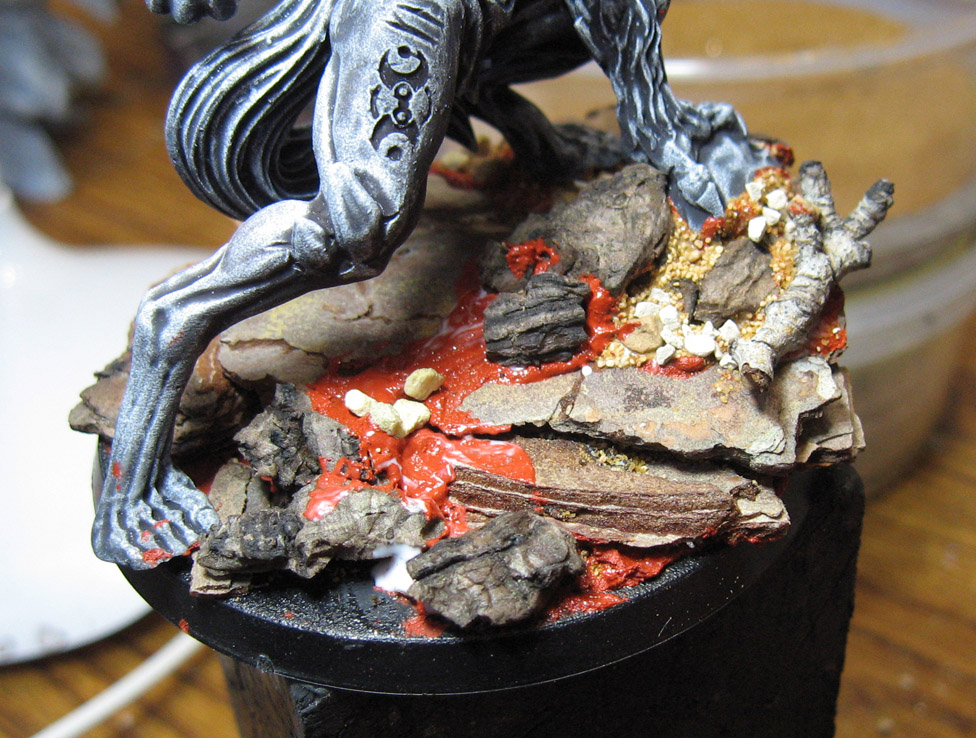 Posted by wappellious at 2:14 PM 6 comments:

A few of my closest friends 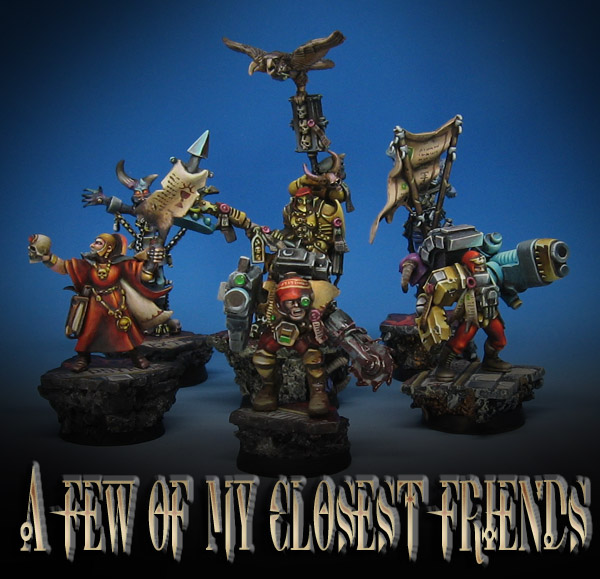 Time for another collection series!  Here we see Inquisitor Reva Garanov and his faithful Retinue. 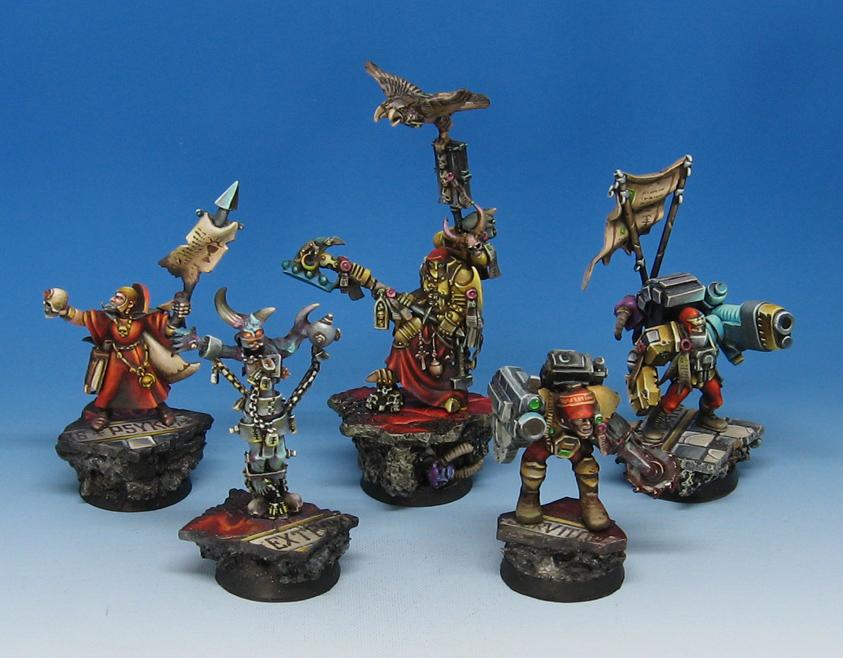 I had a lot of fun making the conversions!  This was way back in 4th Edition 40k, so such things were in their infancy.  I hadn't really done anything like that previously. 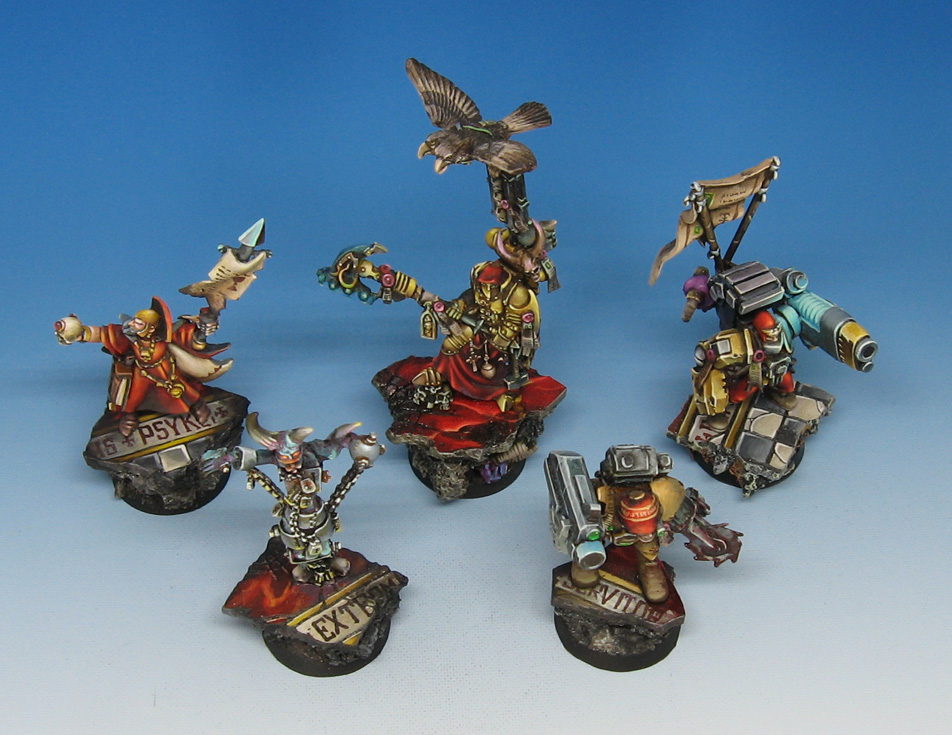 The plasma servitor earned his back banner and Slaneesh marine helmet trophy by blasting a unit of Noise Marines with one well placed (sage guided) shot. 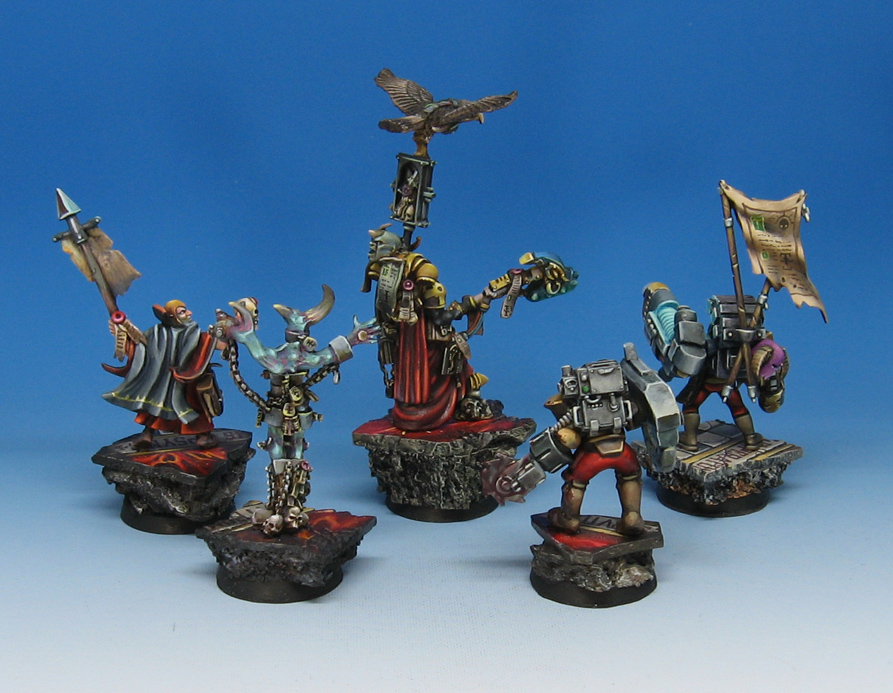 The guns of both servitors were sculpted from scratch in sculpey clay, using the edge holding firm grey variety. 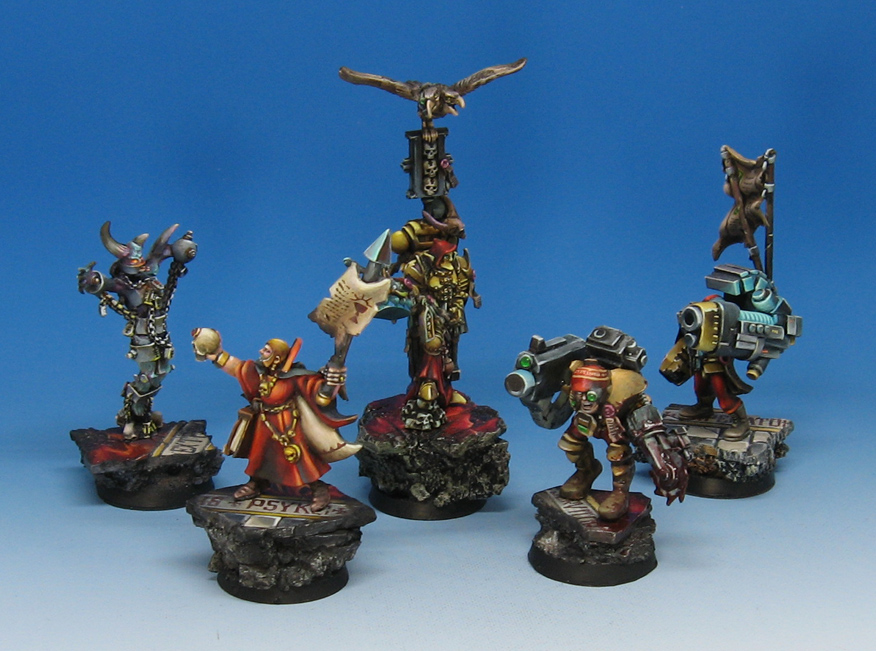 That stuff really holds an edge, and it is very strong! 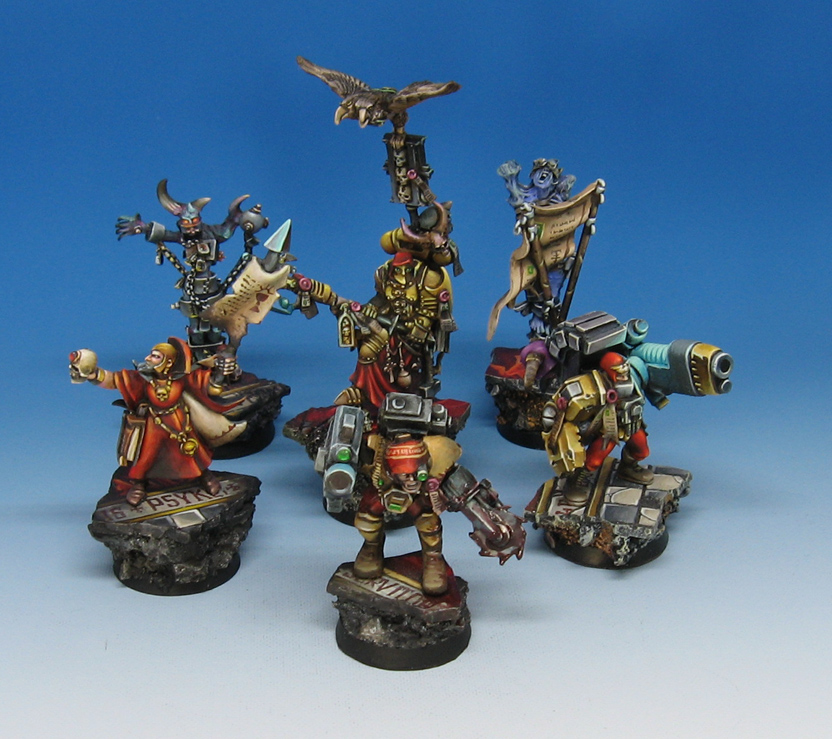 Cheers to the great Inquisitor! 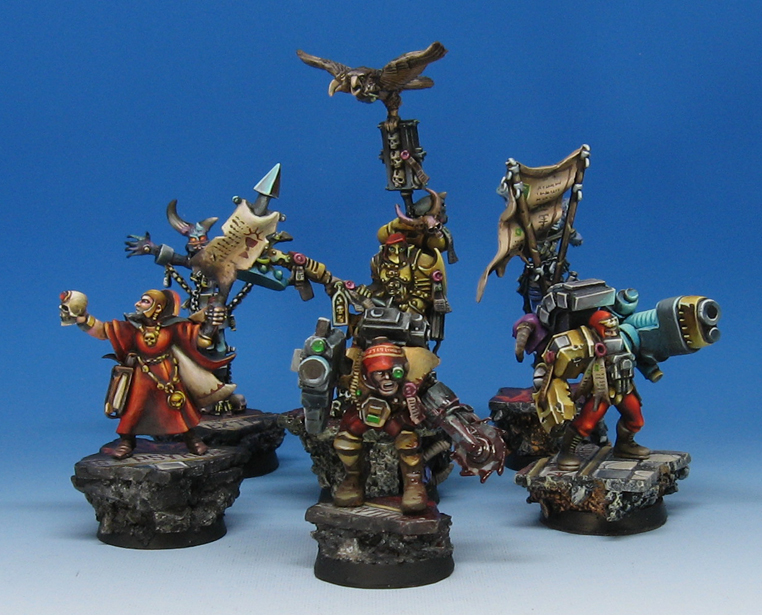 Posted by wappellious at 1:51 AM No comments: