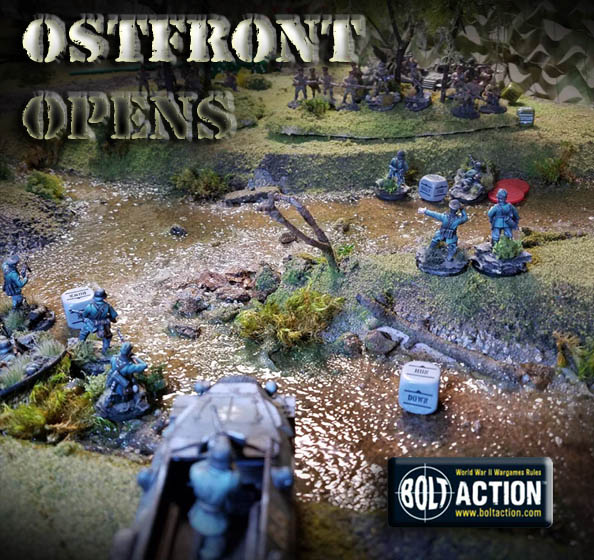 Some of you might recall the Barbarossa Board terrain project from last summer.  Well, a few weeks ago it was time to take it out for a spin with a test game for Roy and his Soviets!

There were a number of step by step episodes showing how that was created... Here's one link to the board project: 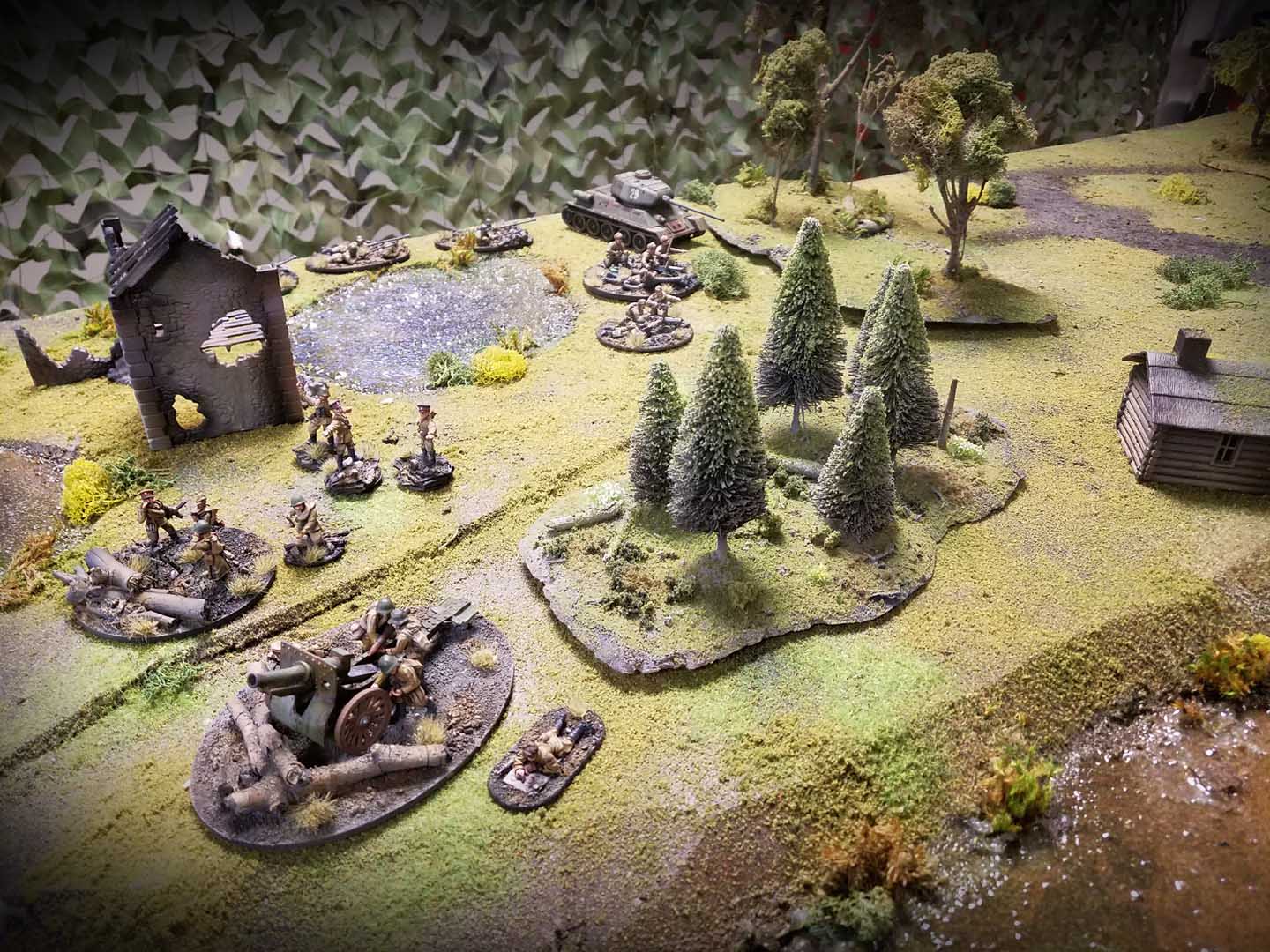 We tried to keep things fairly basic for this first game, but something that would touch on all aspects of deployment, reinforcements, unit types, and so on.  It was decided to do a Demolition scenario.

Obviously, the Soviets had a bunch of order dice.  There were a number of anti-tank rifle teams, inexperienced squads, NKVD units and Maxim MMG teams.  The T-34/85 is actually a 76, we just had to proxy that. 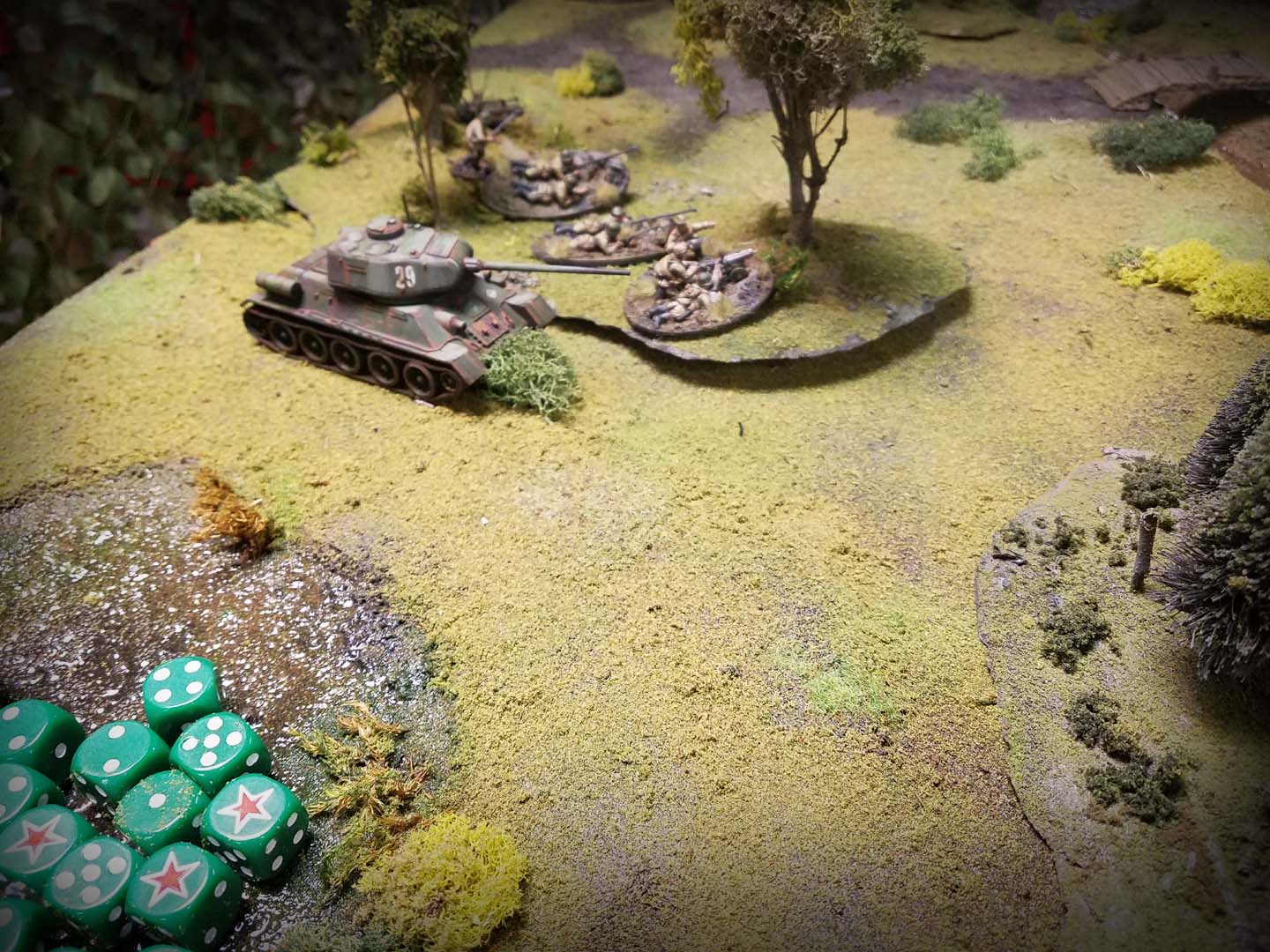 As the board was made to represent the Pripet Marshes in Ukraine, I knew that the streams and rivers on the board were going to present a significant challenge, especially to the advancing Germans.  It was rough ground for infantry and tracked vehicles... but I made it impassible for wheeled vehicles to keep things more interesting.

That choice of playing the terrain had less to do with the depth of the water, and more about the sloped nature of the river banks.  Also, I had a number of wheeled vehicles, and I did not want to be racing across the board to claim an objective on the second turn ;-) 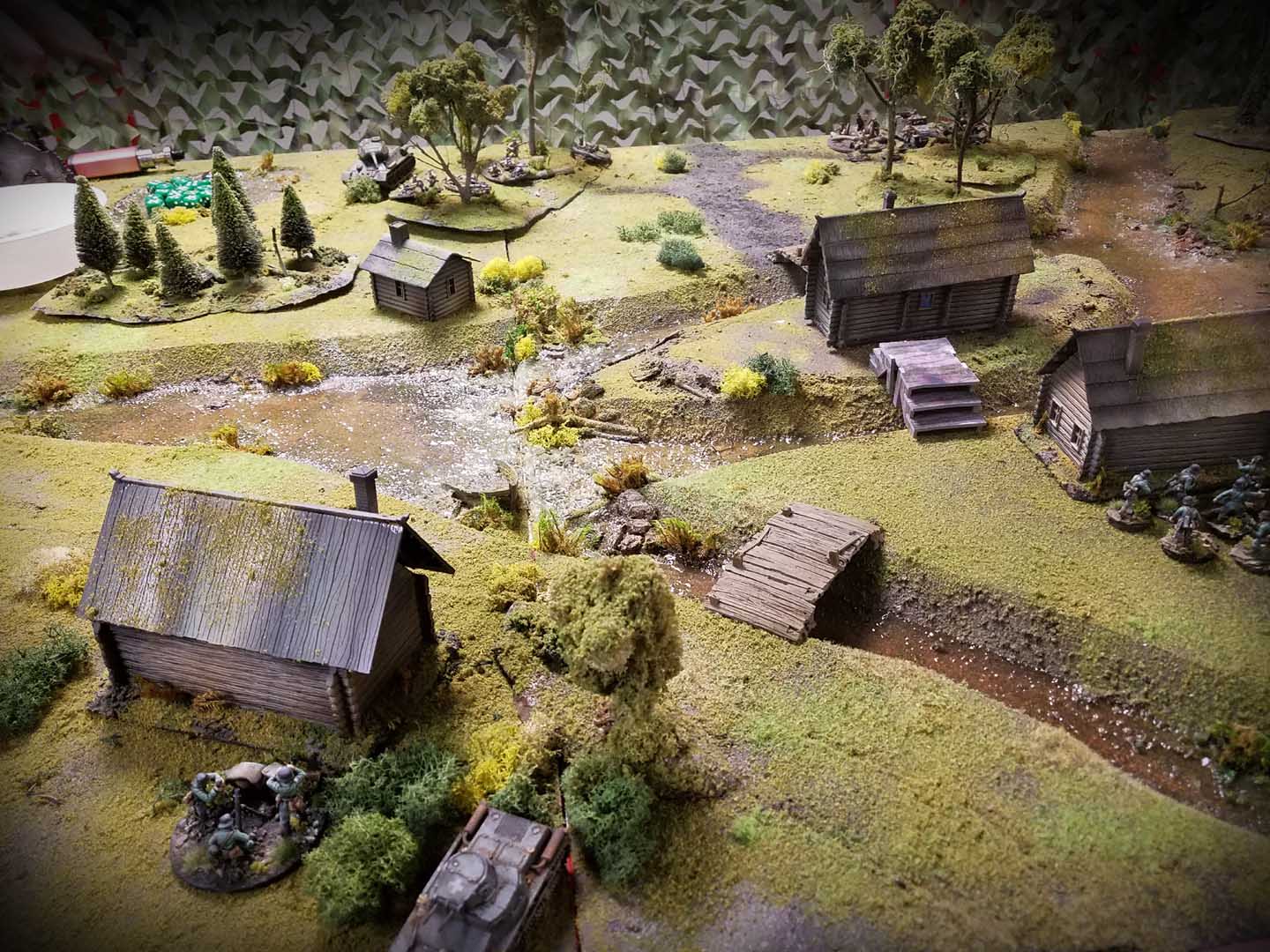 Commissar Royitsky surveys the field, and informs his troops that they will soon sacrifice themselves for Mother Russia. 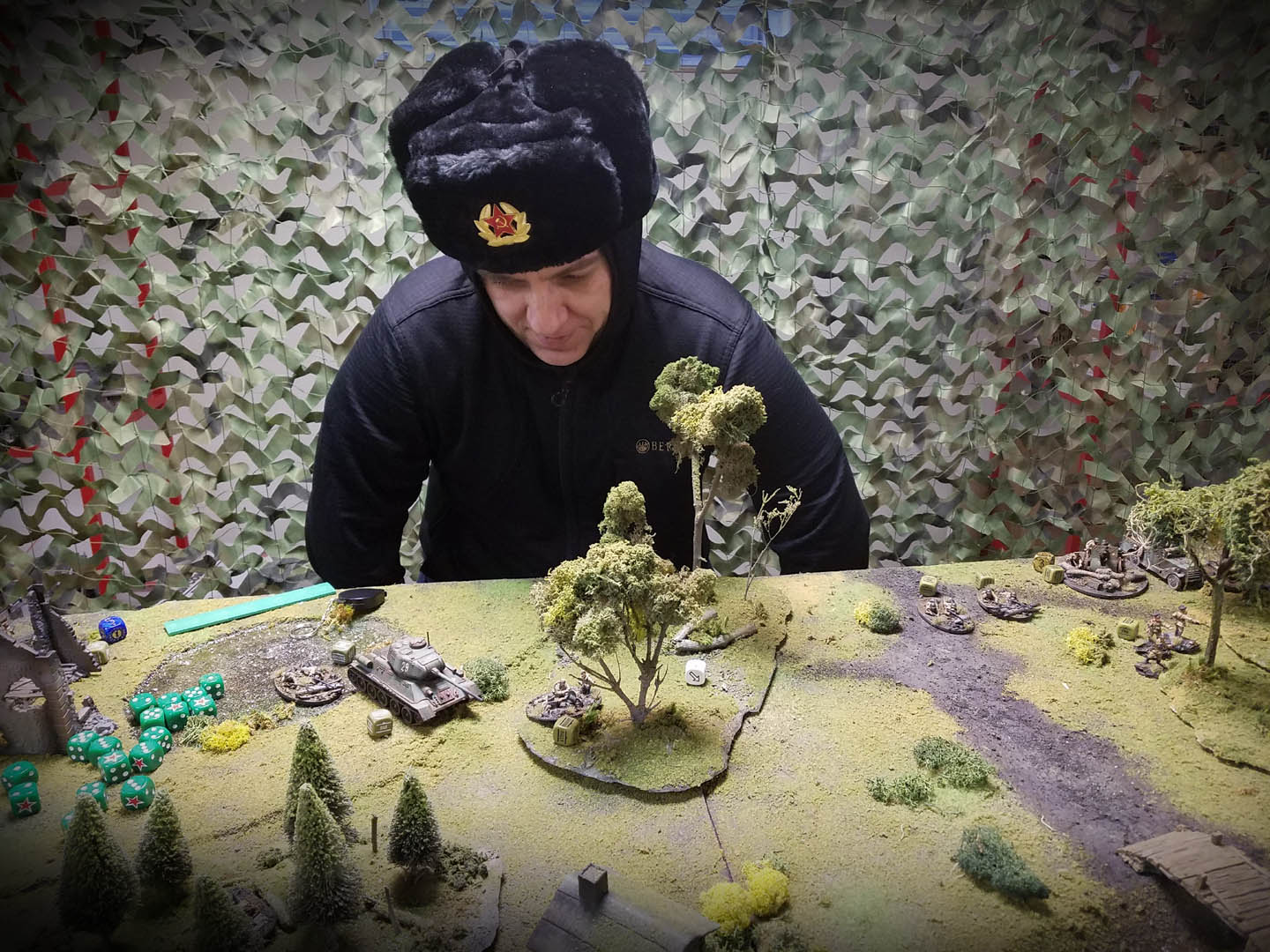 The Wermacht troops surged to the first river, getting out of their Opel Blitz truck which could not cross that obstacle.  It was hoped that the SDK 251 rolling up behind them would be enough support to get across the second river!

The air observer continued to hide out inside the lumber mill, trying to figure out where his ground attack planes were.. 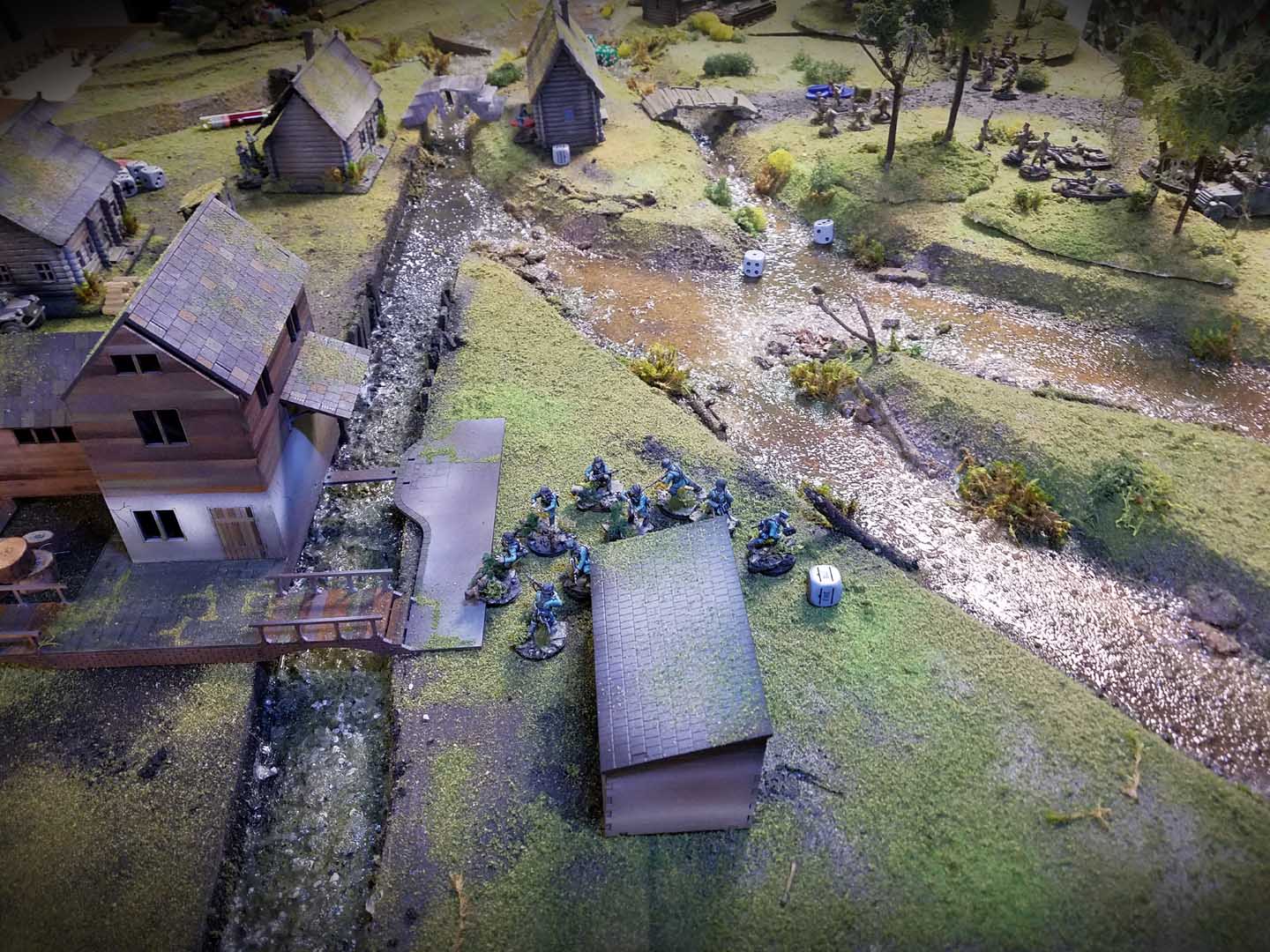 However, a number of Soviet ant tank rifles had moved away from a potential air strike and into position in the woods which blocked the path to the Red Army base.

While the Luftwaffe aircraft were heard overhead for several hours, they did not make their expected strafing and bombing runs in time... much to the dismay of the German high command!

The troops of the Wermacht would have to use all their skill to utilize the steep river banks as cover to reach that enemy base. 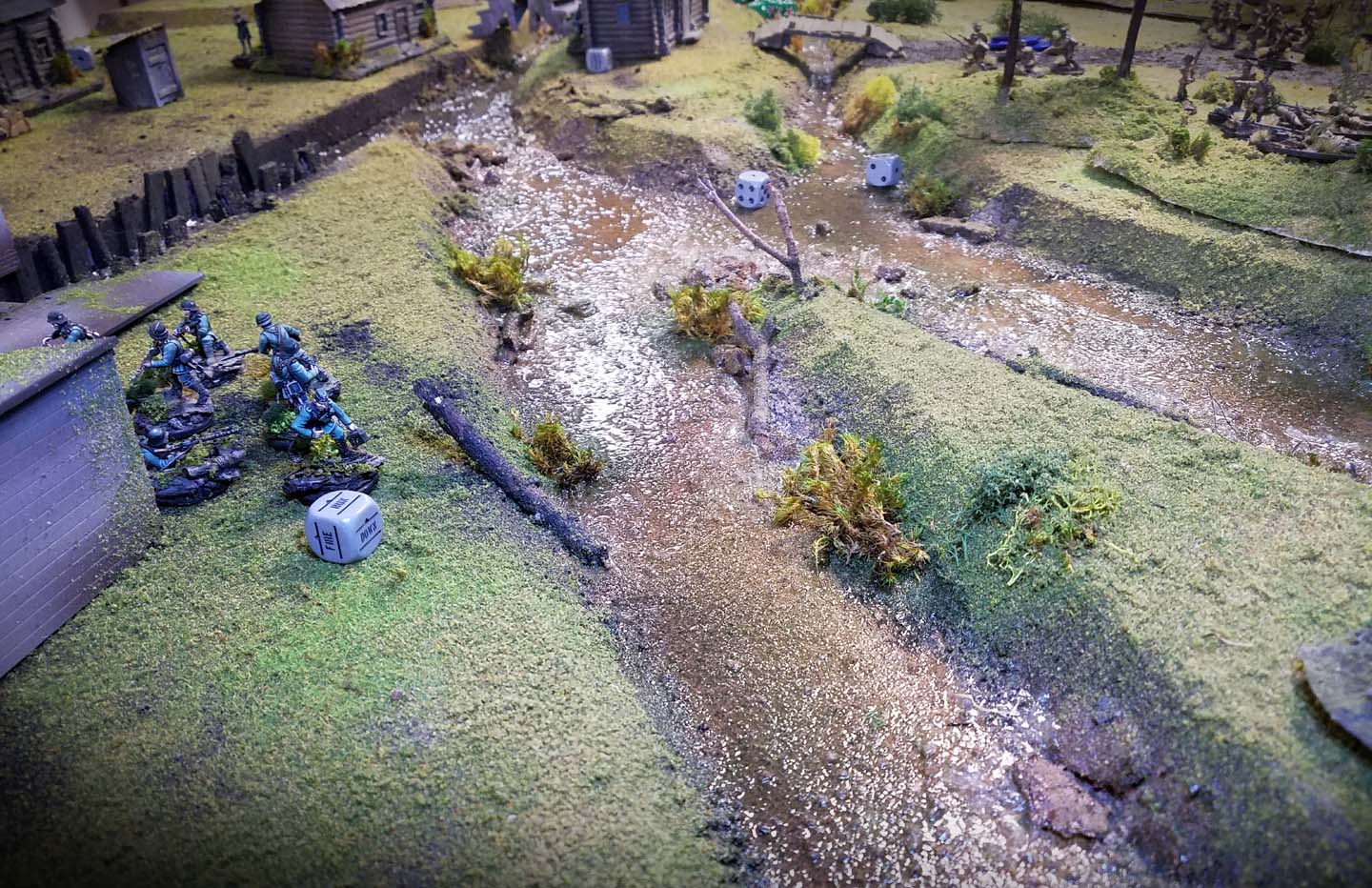 The Soviet tankers detected this movement, and attempted to cut off the advance.  They took up a position in the center of the battlefield, ignoring the autocannons and light artillery of their enemies.  This would allow them to block the central path, which also had the only bridges!!

Behind that was the Machine gun team, which would have to bear the brunt of the eventual air assault. 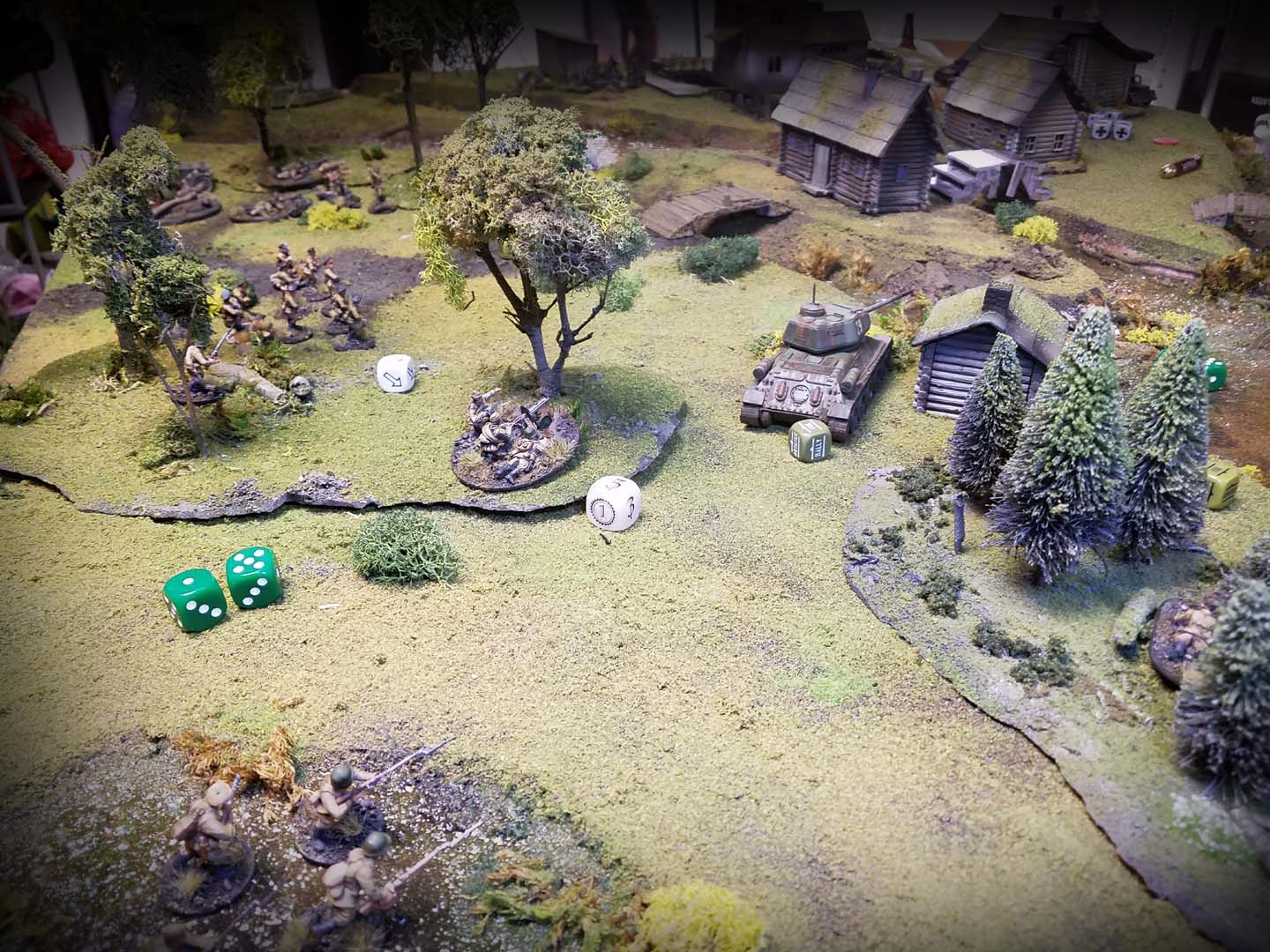 The Soviet forces were indeed taking a number of casualties.  The squad of green troops had already been dispatched, as had a few of the anti-tank rifle teams.  The heavy Maxim MMG team also met their end to repeated long distance fire from the Panzer II and the SDK 222.

In response to the German "right hook", Commissar Royitsky forced his inexperienced squads across the river.  They were hit by withering fire from troops on the central island, the Opel Blitz and another machine gun team.

The untrained troops wavered a number of times, but Royitsky restored their morale with a few well placed pistol shots to reluctant soldier's heads. 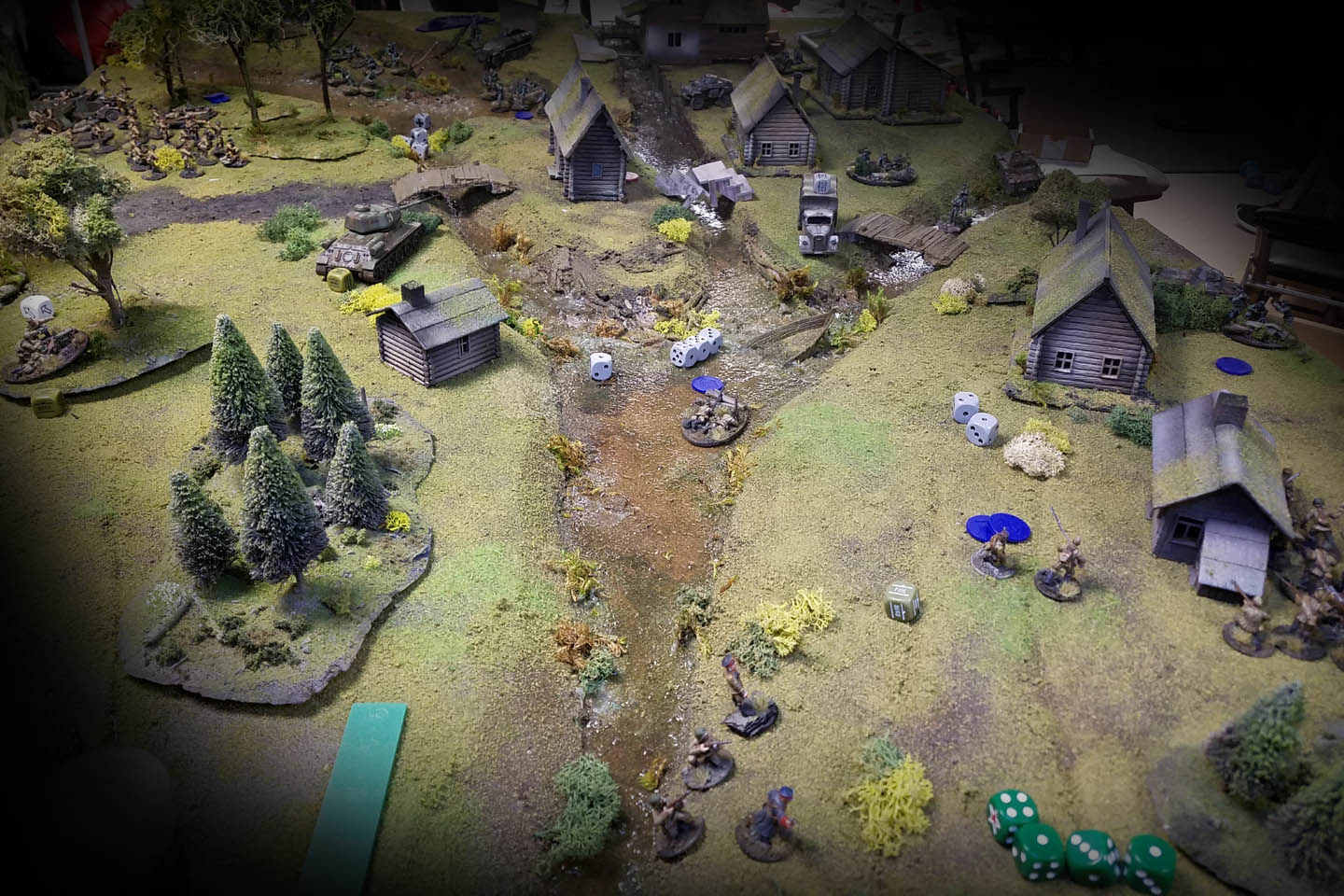 Meanwhile, the German advance to the Red Army base was thoroughly blocked by two fanatical units of NKVD.  Despite the exhortations of their officer, the squads were being gunned down as they struggled in the rivers.

The Hanomag gunner was unable to kill the pesky NKVD in the woods, and eventually the T-34 crew would use their battlefield experience to finally claim the transport vehicle as their first kill. 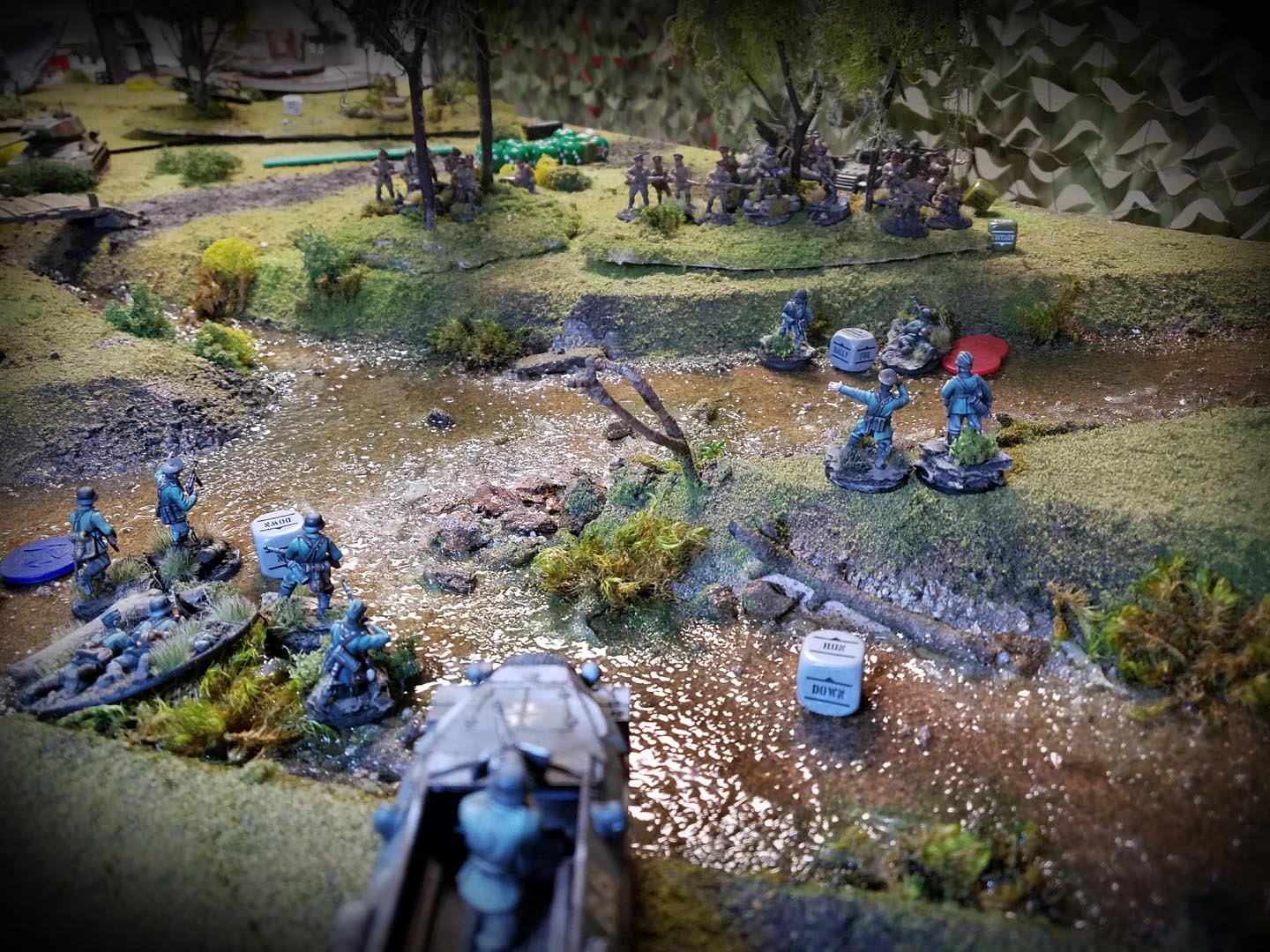 Once the German squads had been sufficiently ground down, the NKVD felt confident enough to emerge from their forest hideouts to assault the Axis troops. 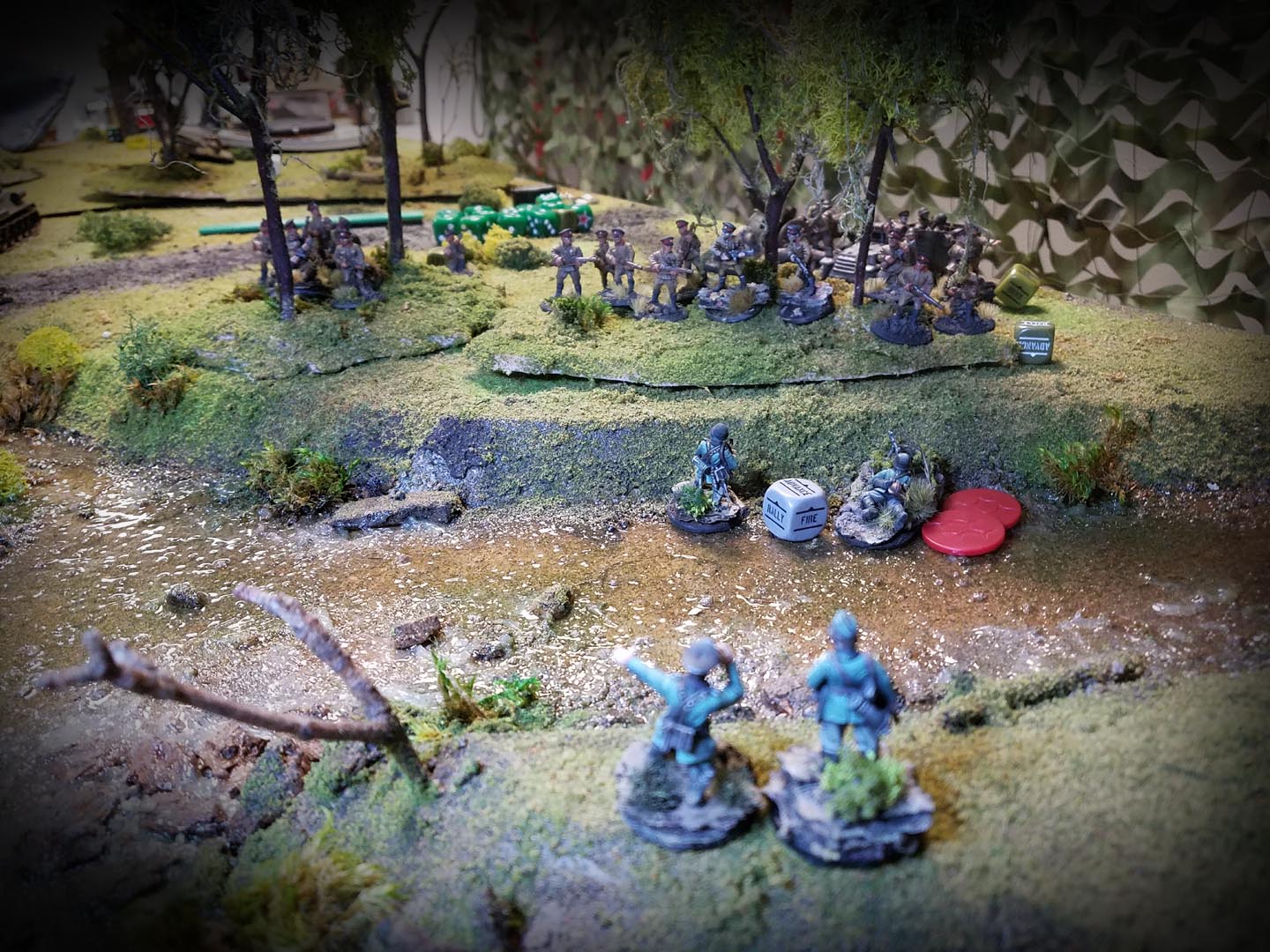 The German armored support had rapidly moved to the left flank, trying to hold off the Red Army attack on their own base.  Despite all the massive firepower and casualties, the Soviet survivors had reached the German base despite valiant efforts by the Wermacht.

Commissar Royitsky had achieved his goal, at incredible cost.  Will he be able to raise enough new recruits to hold off the next German attack?  Stay tuned as Barbarossa continues!!

I also have my video battle reports: 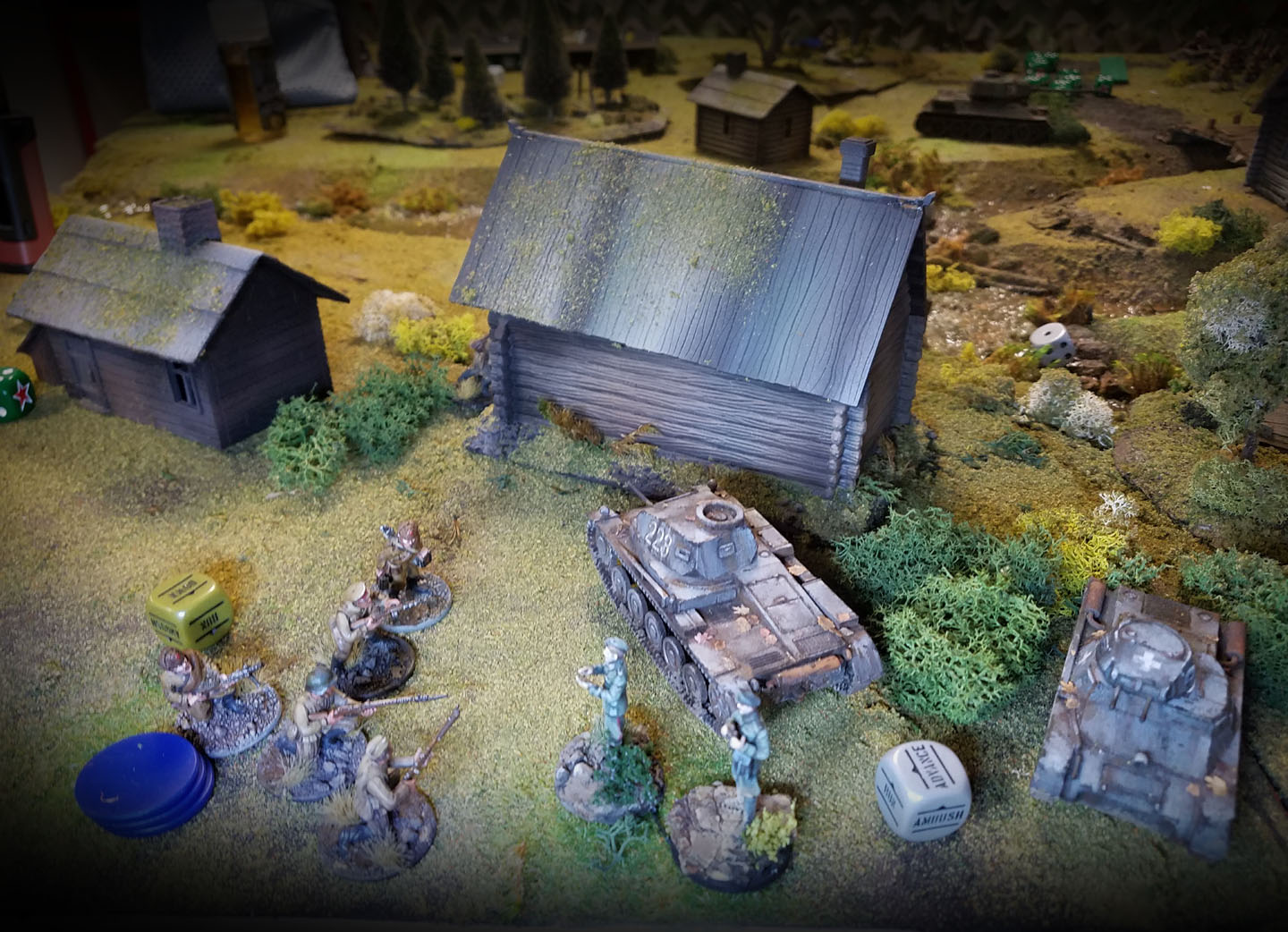 Posted by wappellious at 8:38 AM 2 comments: