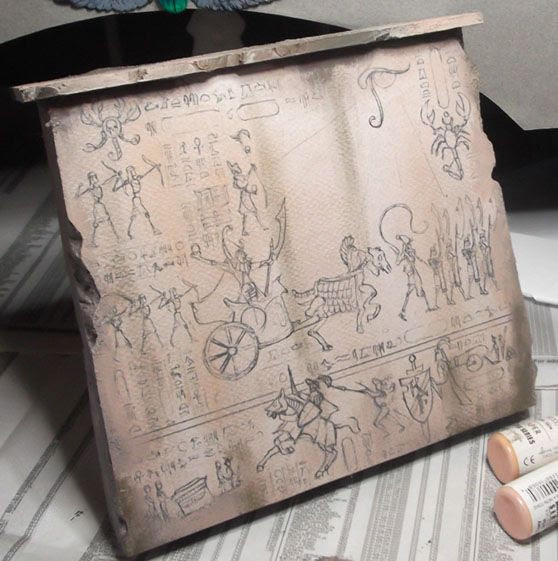 Today was yet another test in the Great Experiment.  There have been numerous "firsts" for me in this endeavor, and here's another one.

The last post showed how I had built the obelisk and the back wall, using Plan C.  That is gluing the heavy pastel paper directly to the foam.  Today I had to make that paper match the rest of the board!

First, I began by getting paint to cover the oxide paste I had used on the edges: 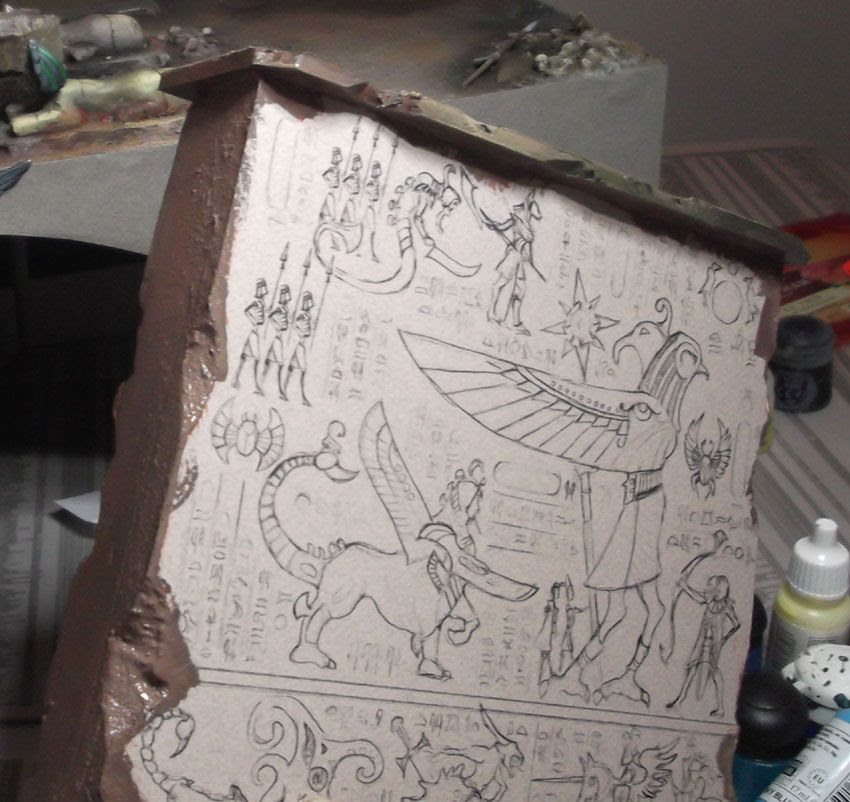 I did the same on the obelisk:

Since paint tends to dry darker on the paper, I had to take that into account as I tried to "feather" the colors onto the paper. 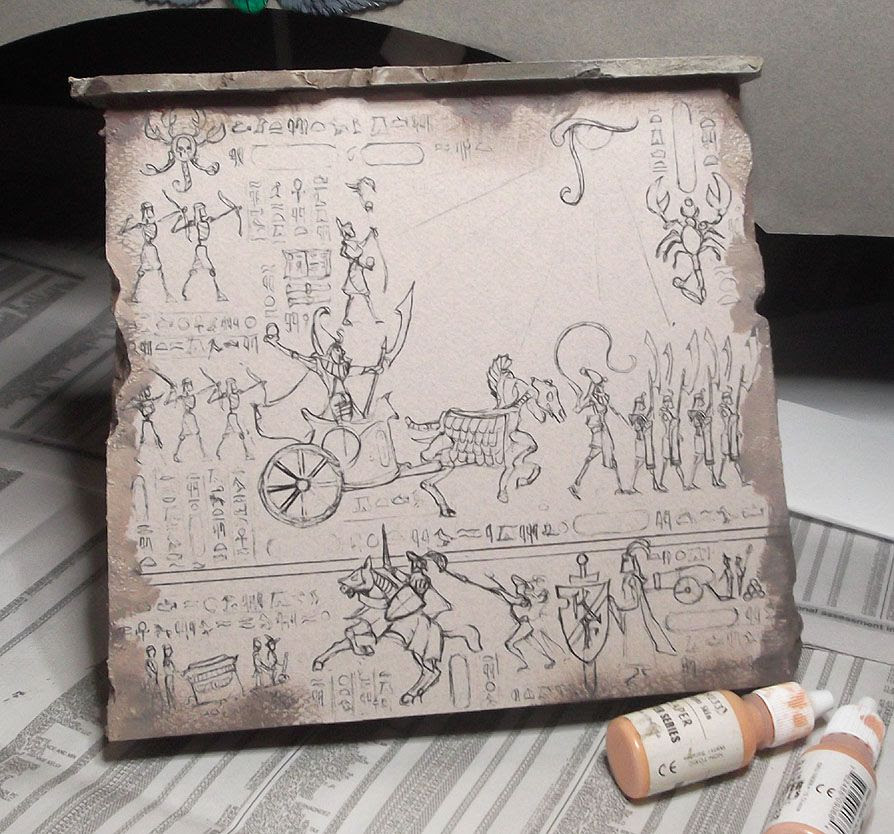 As I worked around the edges, I started to carry some paint out onto the paper designs... 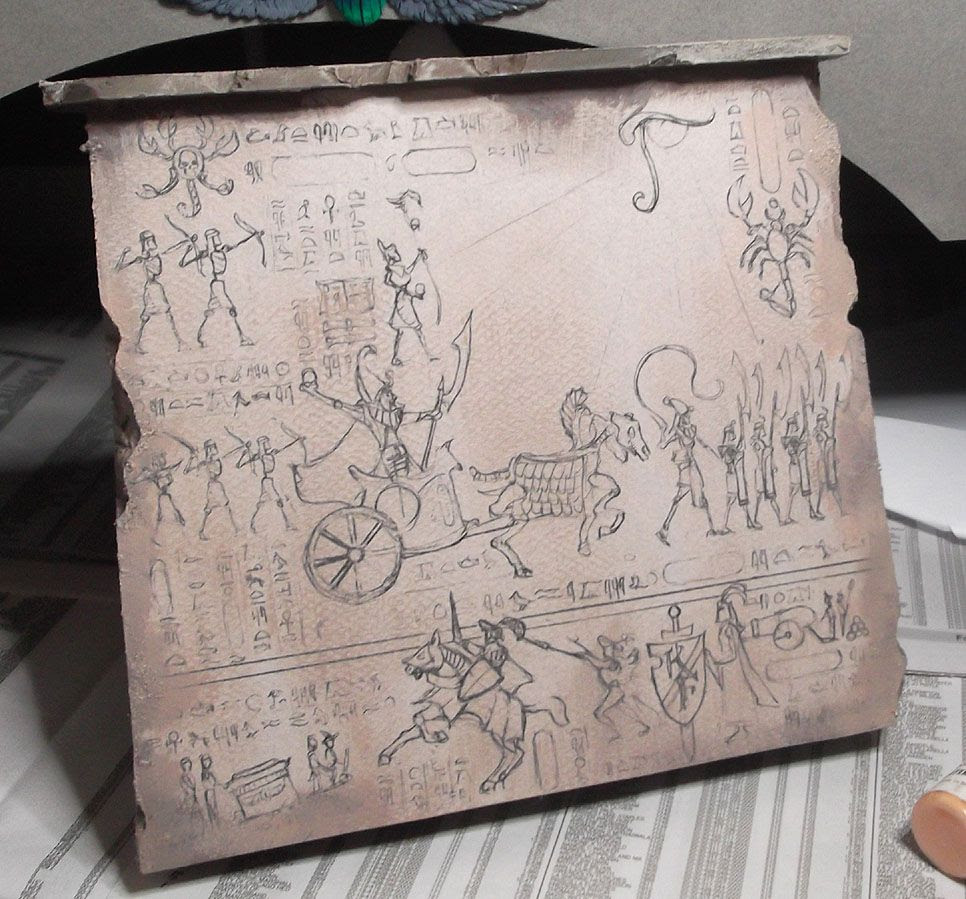 Here's how it started to look overall: 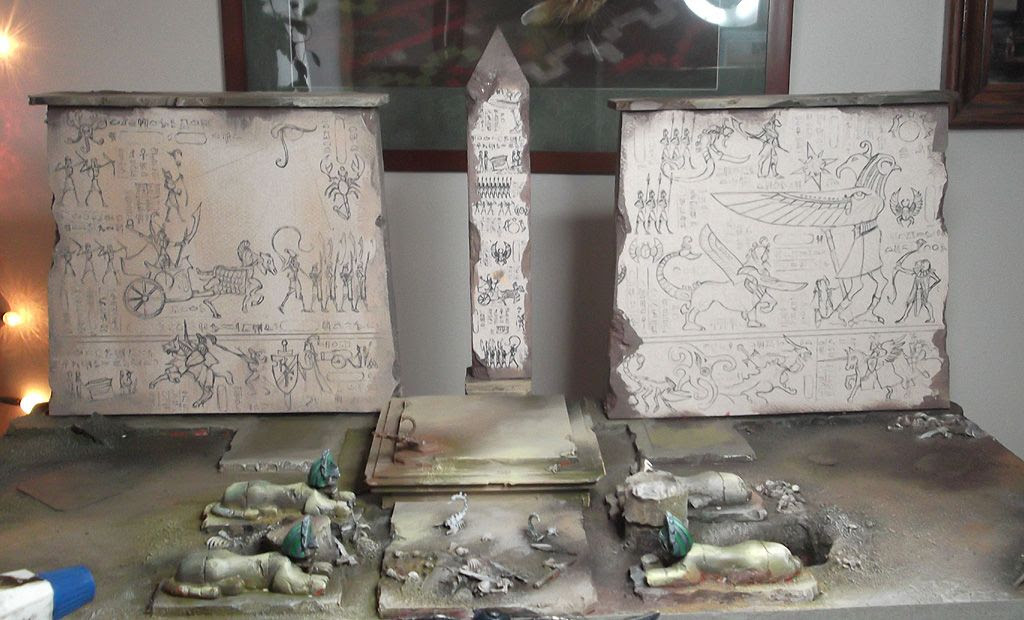 This is about as dark as I got with the weathering: 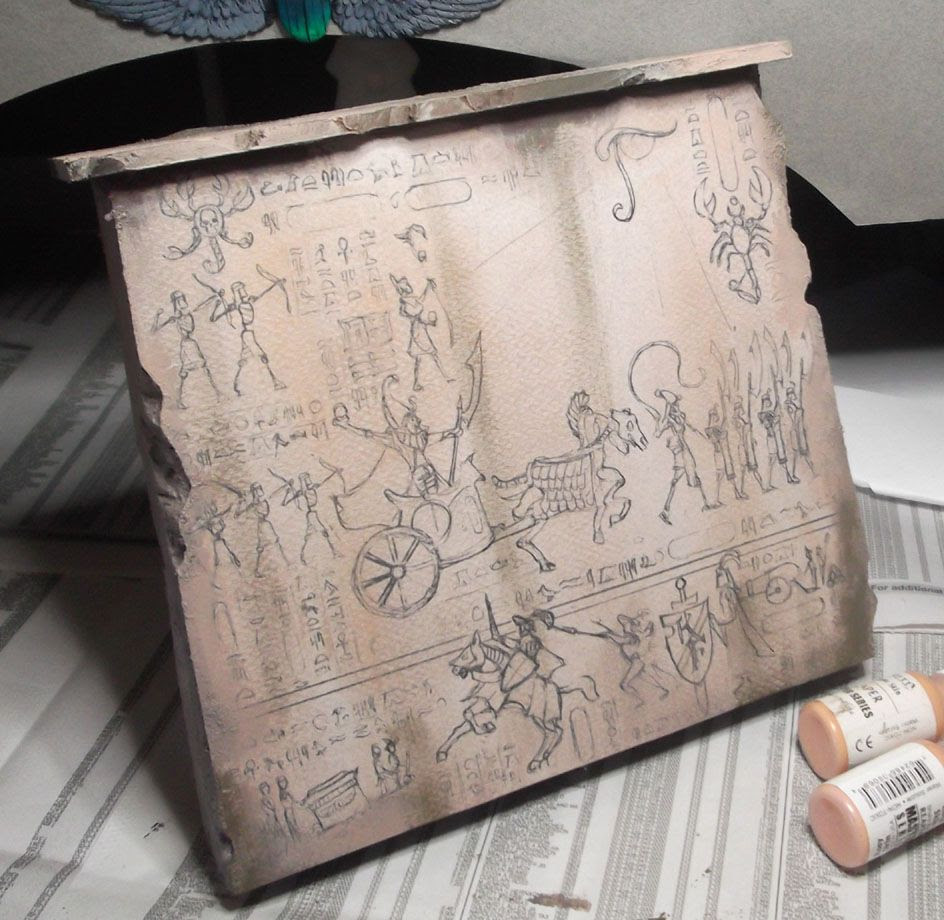 Here is a sequence on the other side of the back wall... 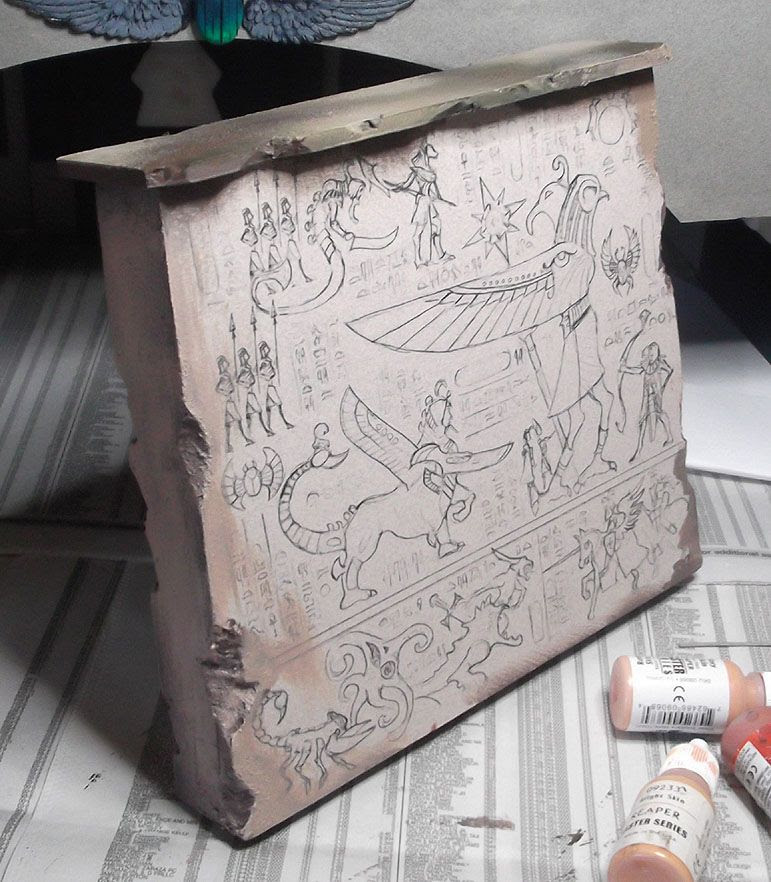 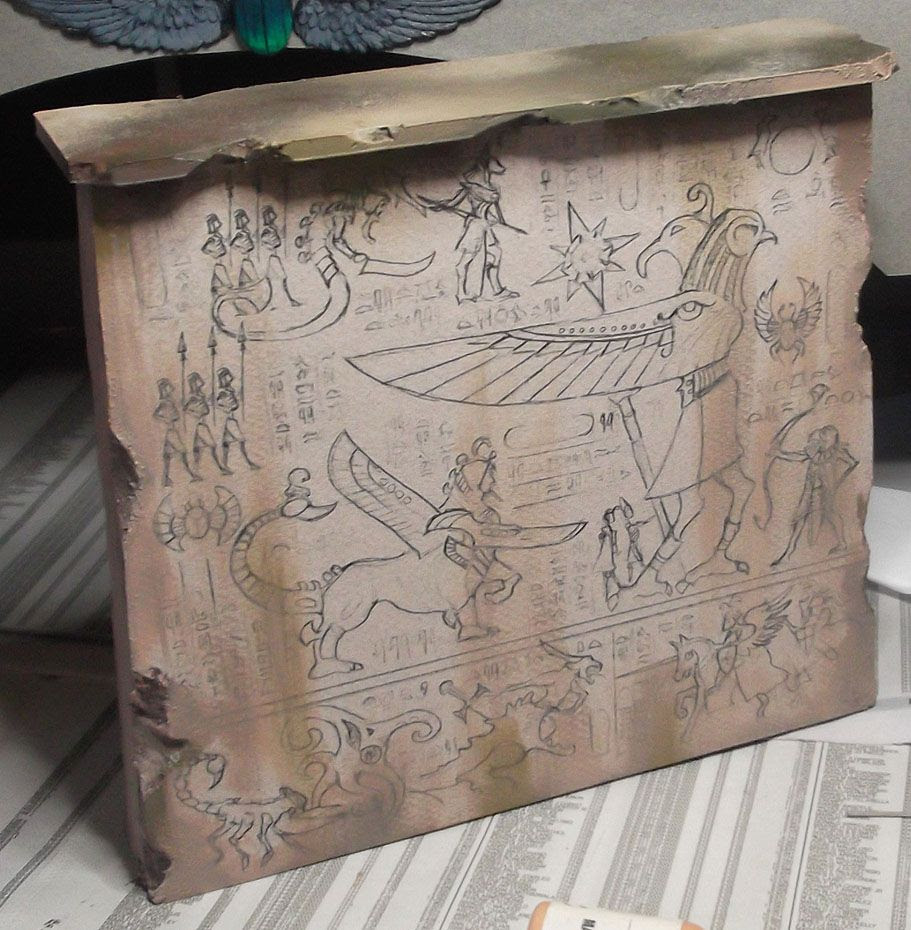 At this point, I began to think about putting some hints of faded color on the wall, and preparing to do the cracks and such. 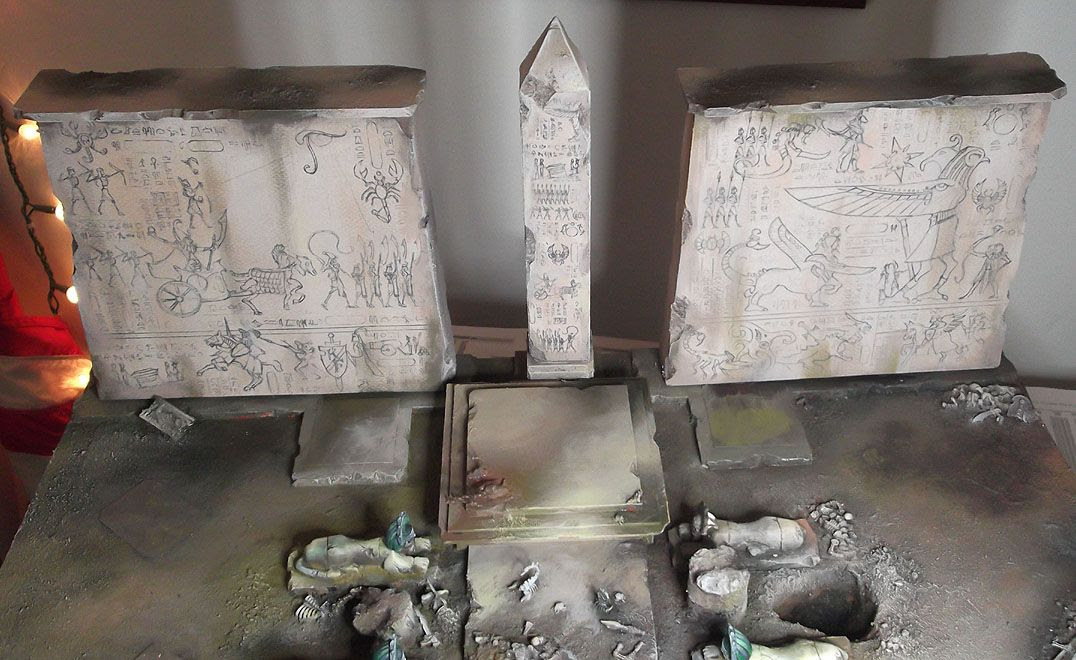 Tomorrow I will be posting the rest of the images on the second part of the weathering process!
Posted by wappellious at 5:38 PM 2 comments:

Hieroglyphs in a hurry: changing on the fly again... 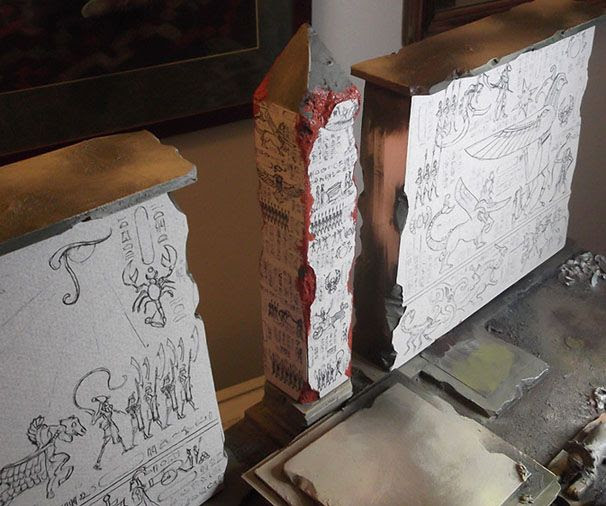 This project has undergone many twists and turns, which is pretty typical, but the complexity of this one has meant a lot more than usual!

You saw the drawings that were done for the back wall, etc.  The original plan was to carve those out of sculpey.  Weight concerns and lack of time meant that would not happen.  My next thought was to trace the patterns onto the pink foam directly.  It became abundantly clear right away that the second idea would not work.

In desperation, I thought that I might be able to print out the designs to scale.  I have several sheets of pastel paper that were good colors and a nice texture.  That lead to a new plan.

I would print out the drawings on the pastel paper, and then use a glue stick to attach it to the foam.  If I could get it to stay flat and look normal, that would be great!

Here are some views of the back wall designs: 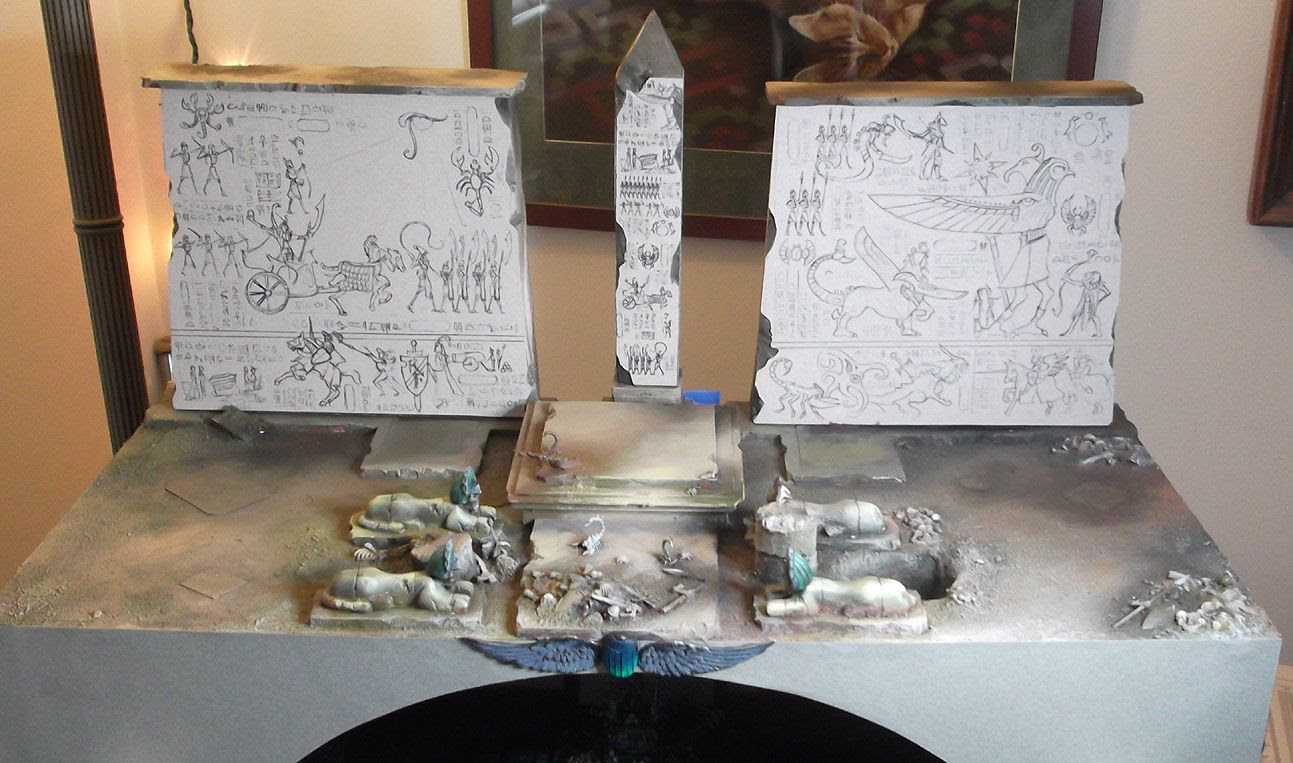 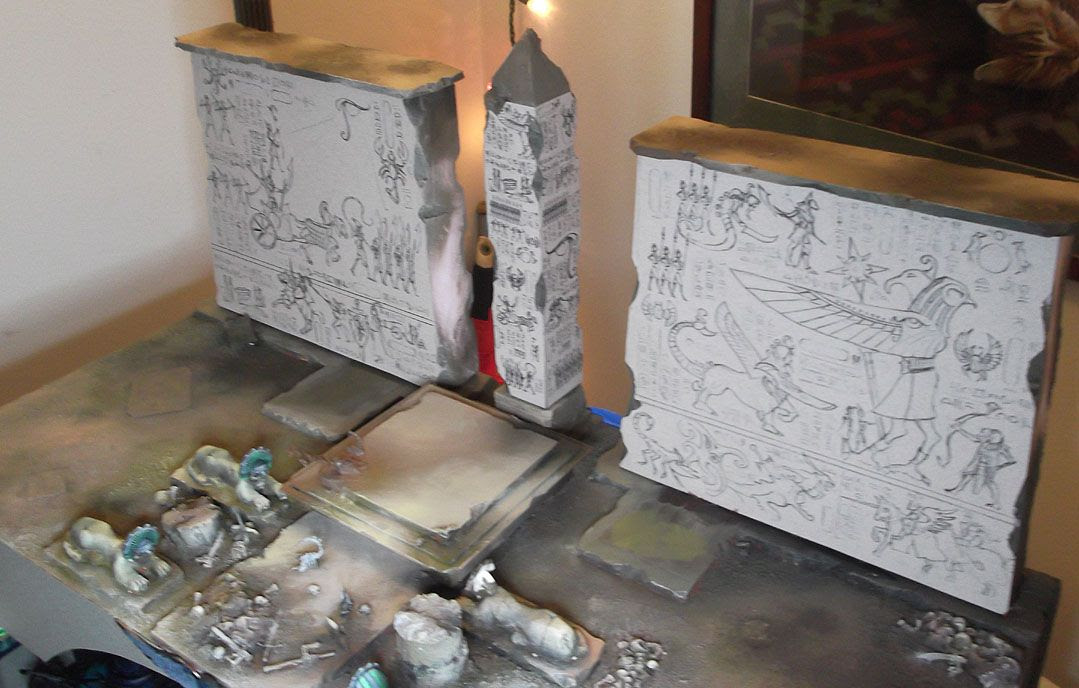 Here's the Obelisk, showing a few steps as it was cut and glued into place. 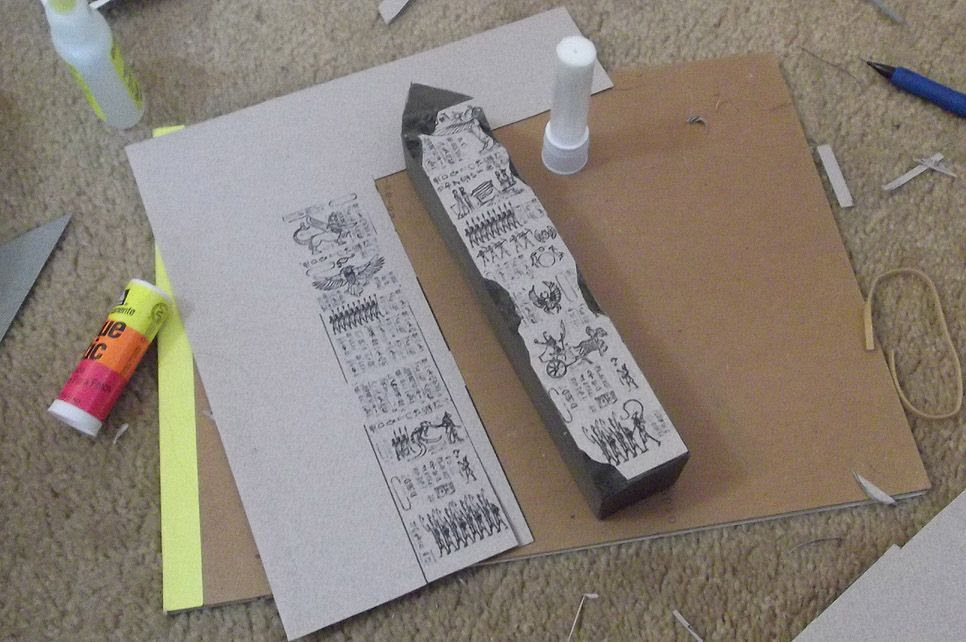 I took the two large drawings into photoshop and and reworked them into a multi sided obelisk, keeping the story of the Tainted Pharaoh running the whole way... 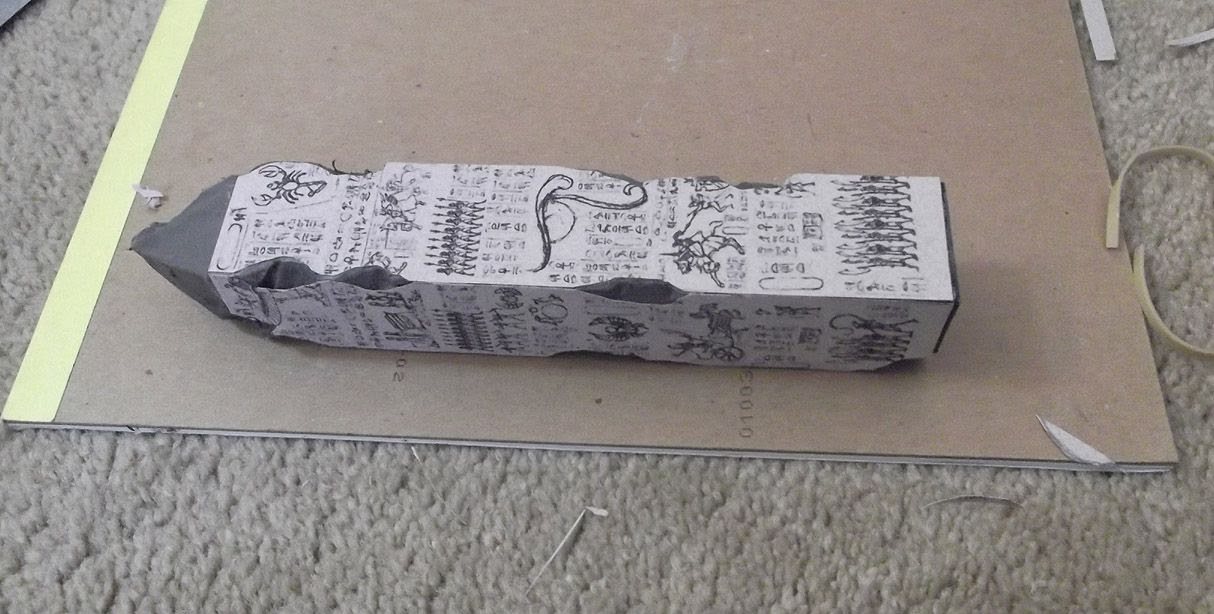 Once they were all in place, I needed to fix all the edges and corners.  That meant it was oxide paste to the rescue! 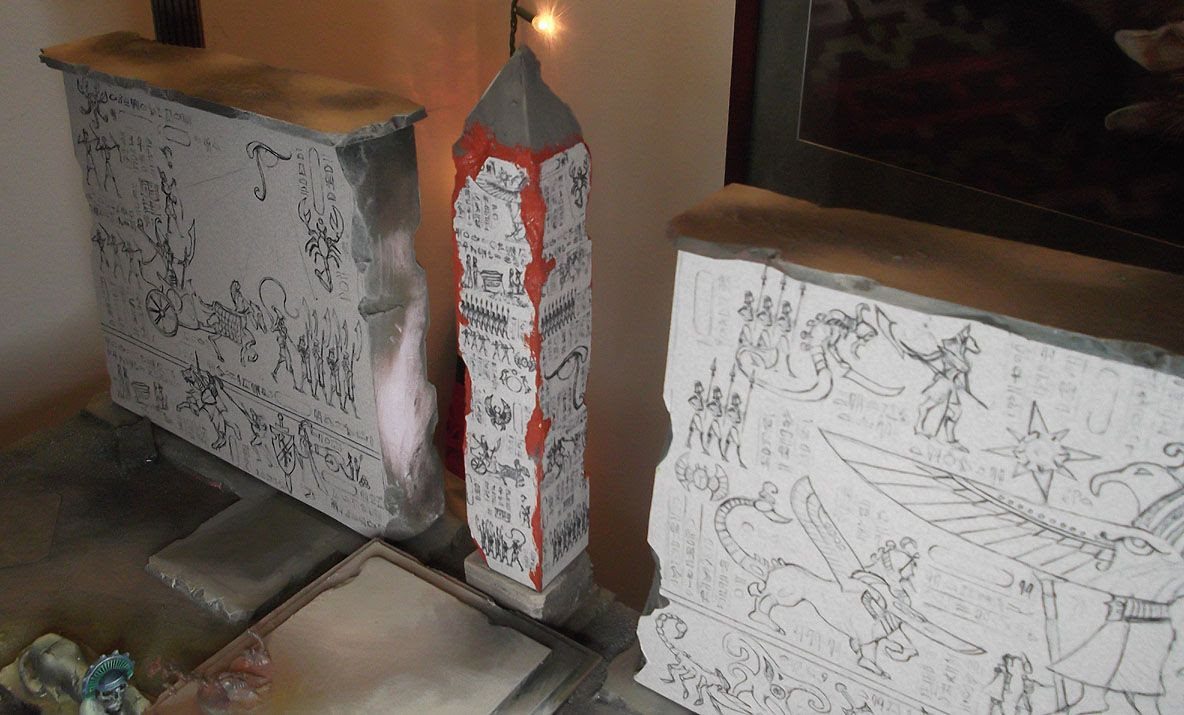 It did not warp the paper at all, which was great.  It wnet a long way to securing the edges as well, so I don't think I have to worry about them peeling away over time. 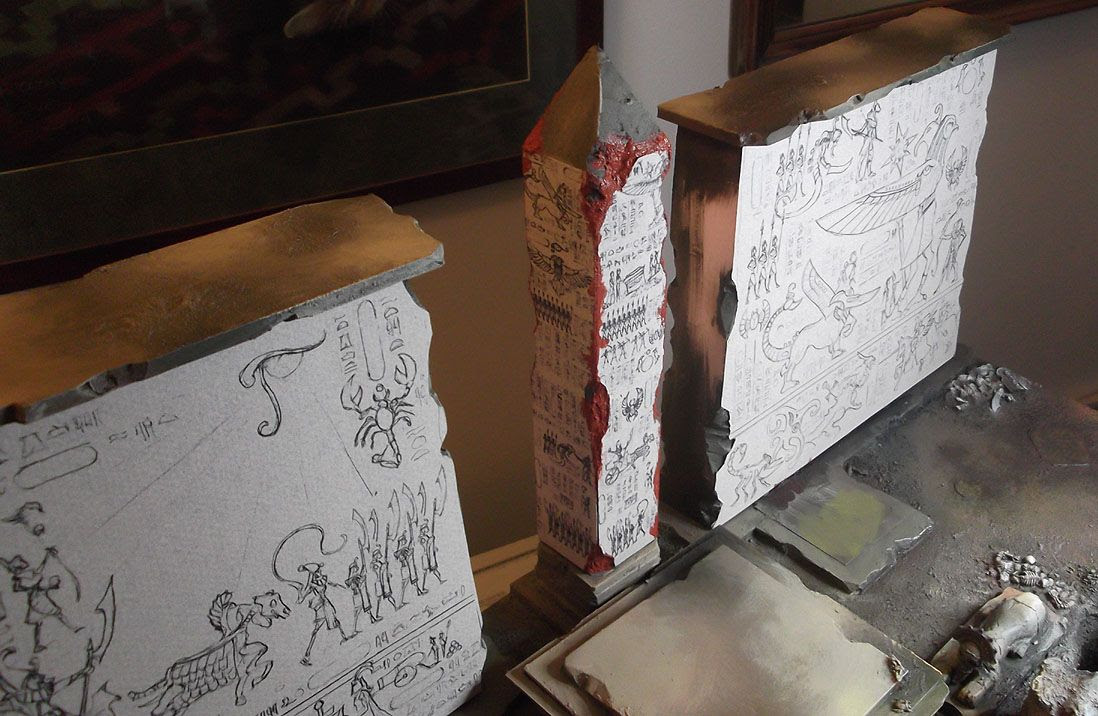 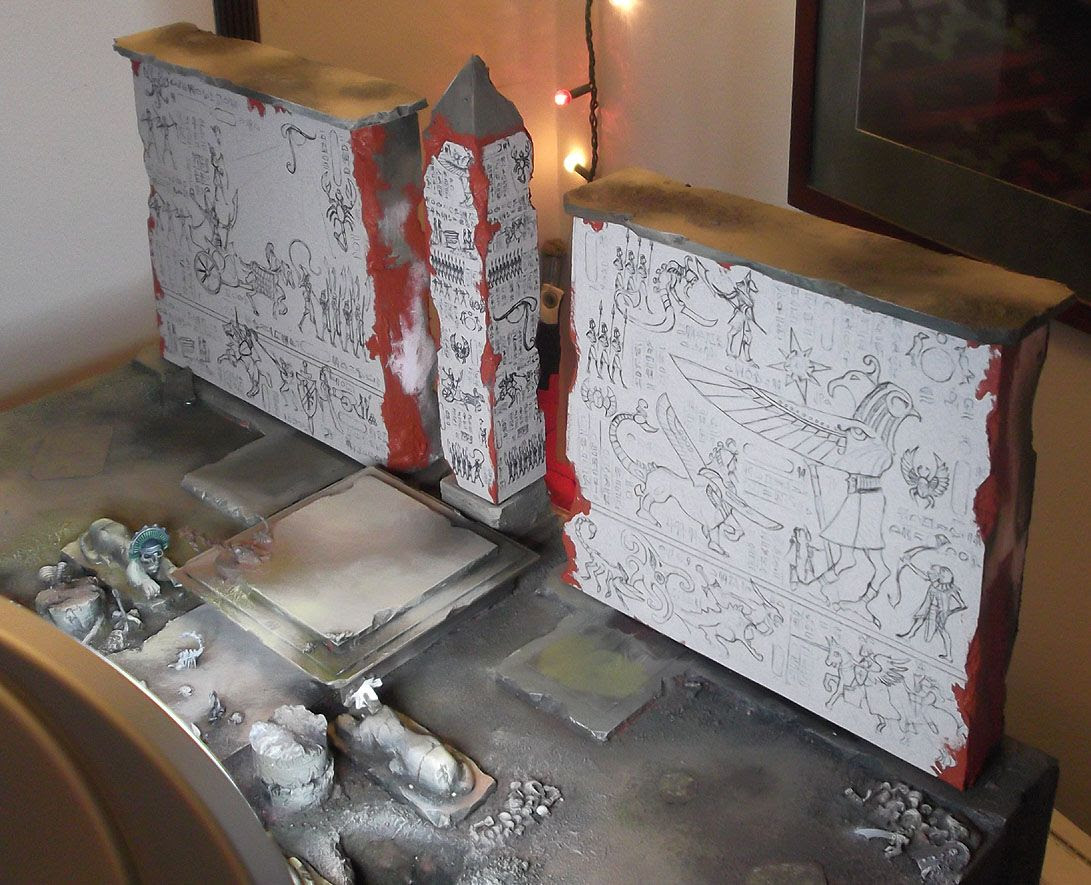 Once all this dries and sets, I will paint the edges, put some faded colors on the glyphs, and do lots of weathering to make the colors match the board. 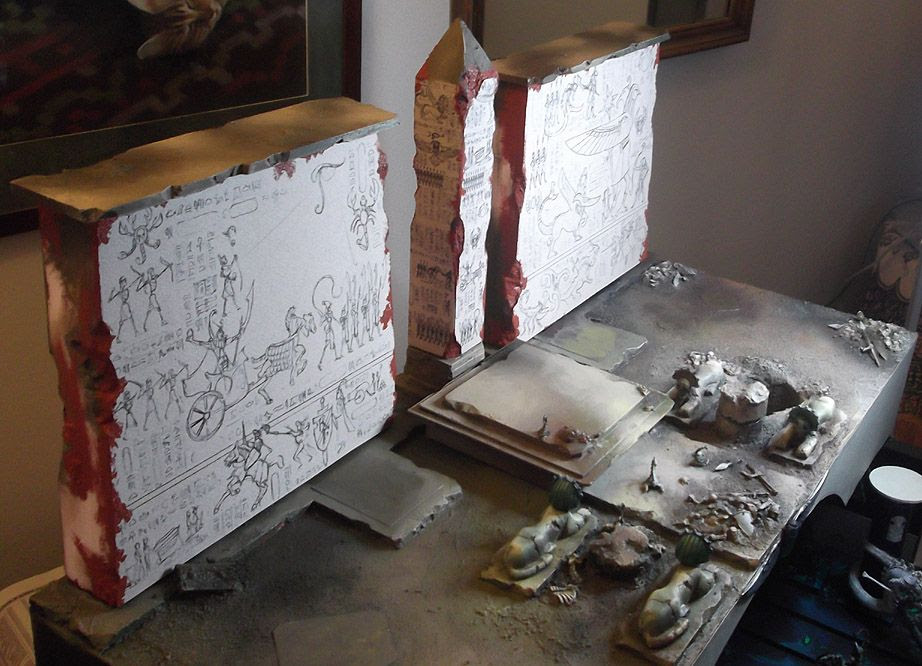 Posted by wappellious at 1:22 AM No comments: