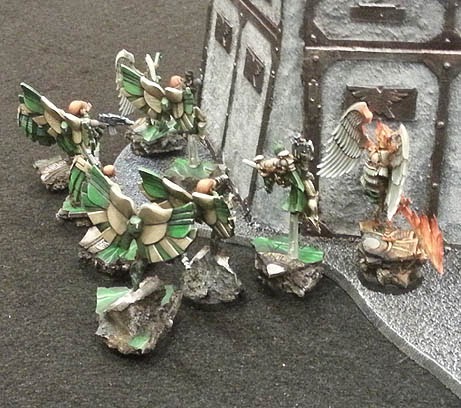 As some of you already know, there was this small matter of the tournament yesterday.

Many of you also know that I have never been a fan of 6th edition, and I become less so every time I play it.  Yesterday was a confirmation of why I look to play other games instead. :-)

However, the games needed to be played, and those newly painted minis had to get some action!!!!!

The first game was against a top 16 player, who had a high powered eldar/DE list.  This is where I would learn about the dreaded triple play of re-roll misses, re roll saves, and deny all cover.  It would make for a very long day, and potentially cookie cutter games...

At least I got to set up the ADL! :-) never got much use out of it though, as it would turn out. 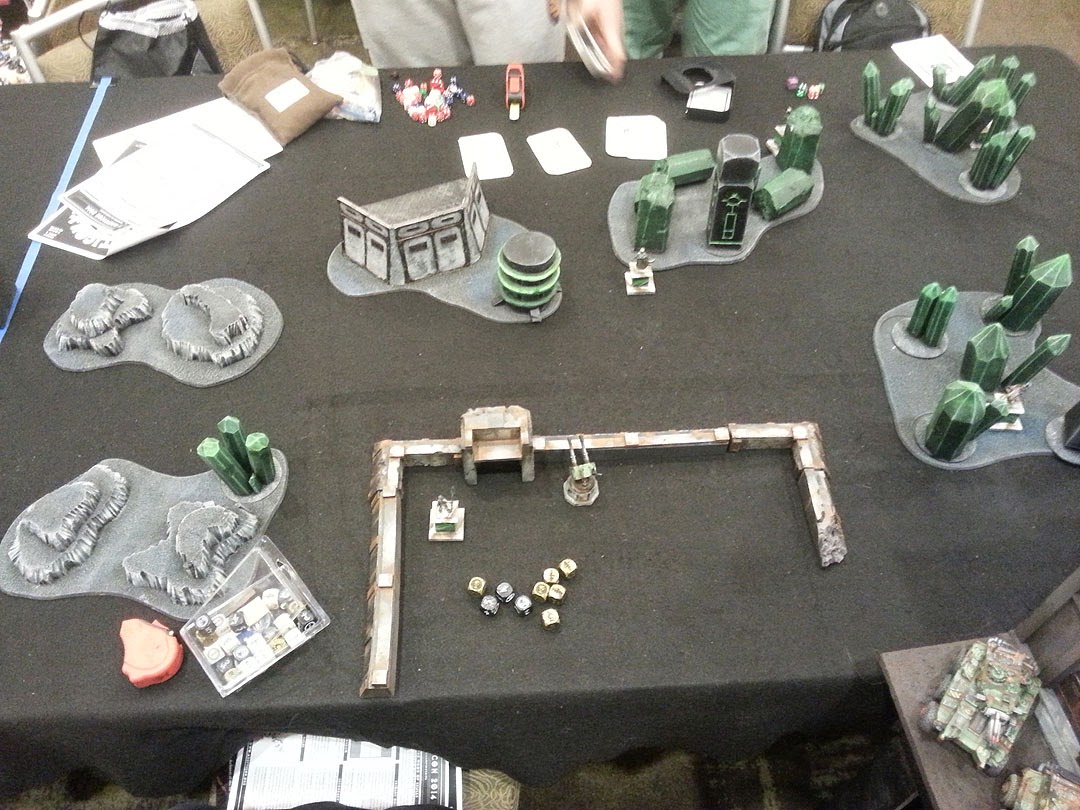 I knew I had done a lot of minis, but seeing them in one mass like this actually scared me quite a bit!  Yikes!  Who was insane enough to paint all those?  That guy needs help. 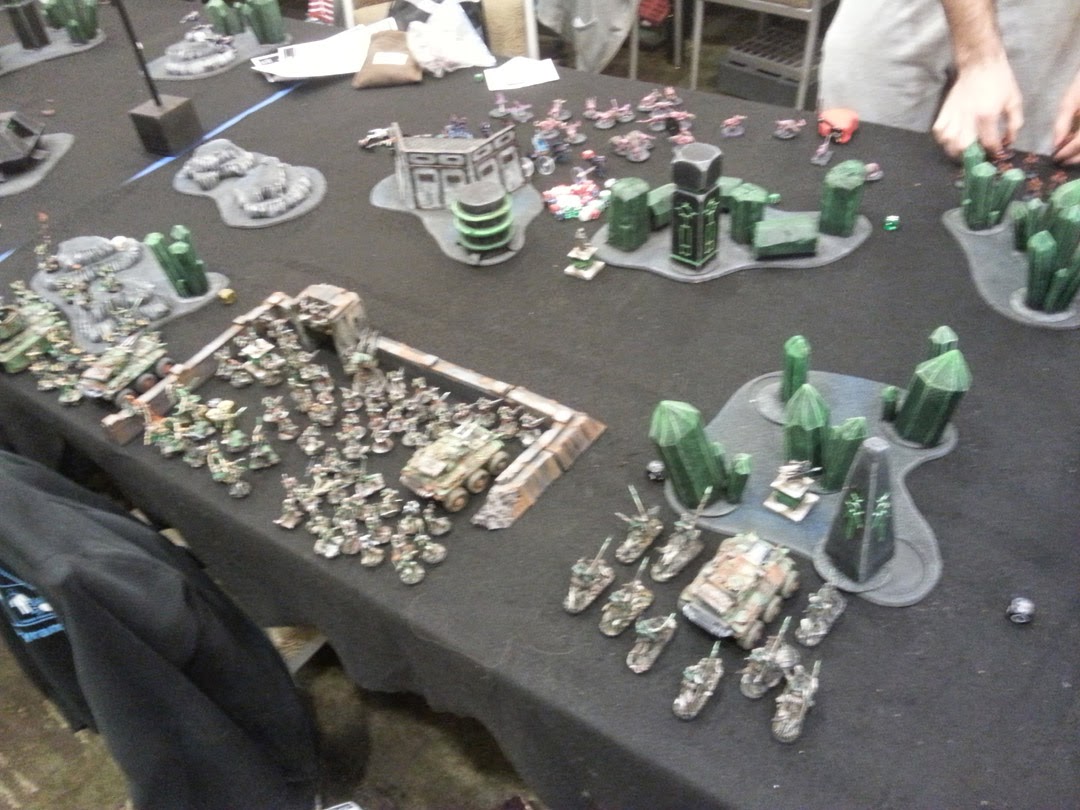 As you can imagine, the Brookfield Zoo arrived quickly.  With all the re-rollable saves, it was not hard to arrive mostly intact. 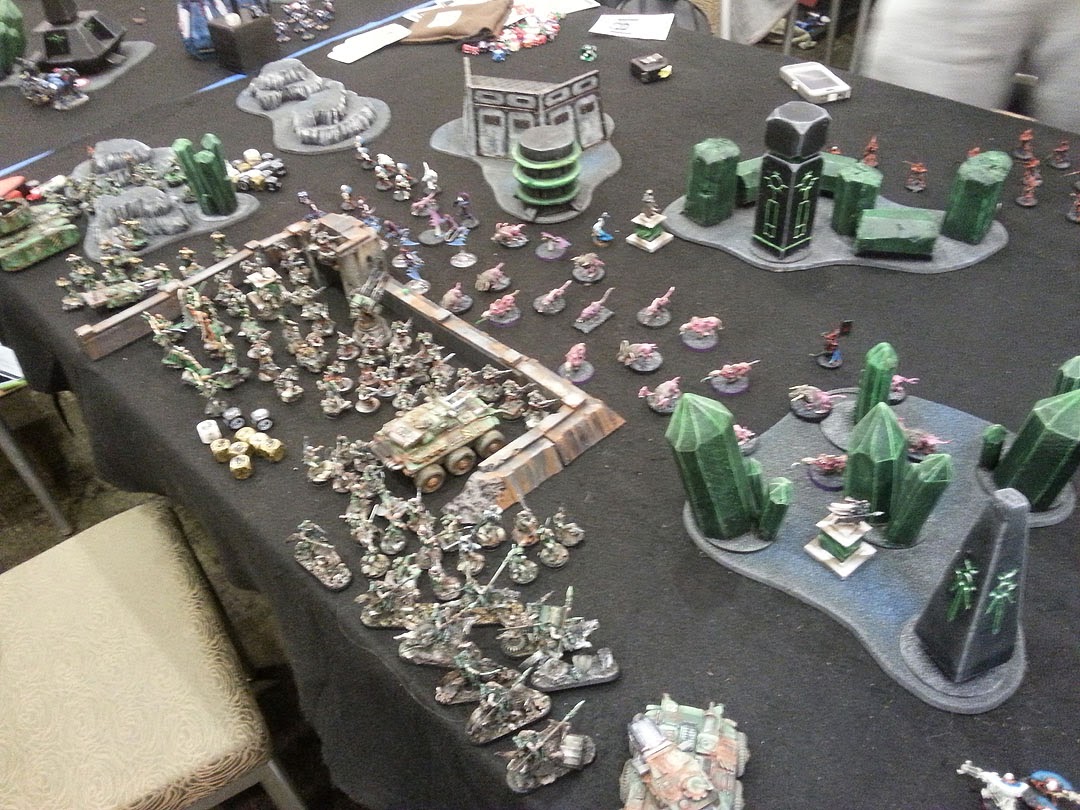 Holy smokes!  At the walls!  Not to worry... Sergeant McGerggar stands proud at the gate... 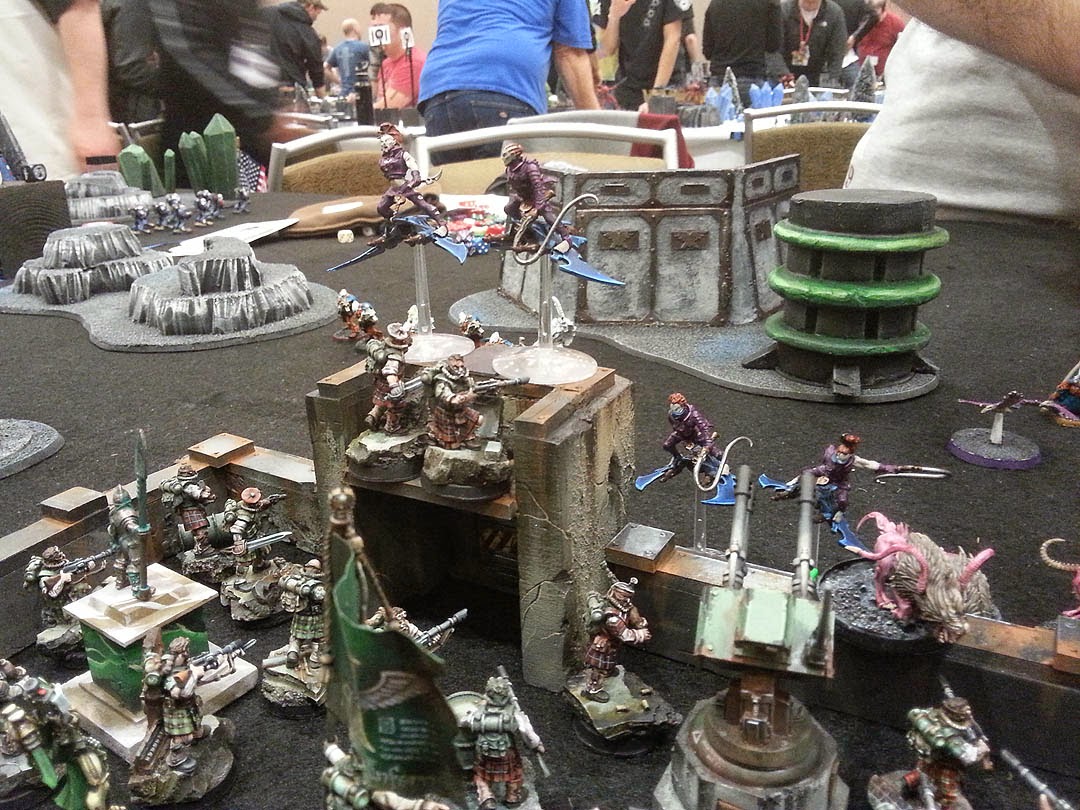 Then there were less Highlanders. 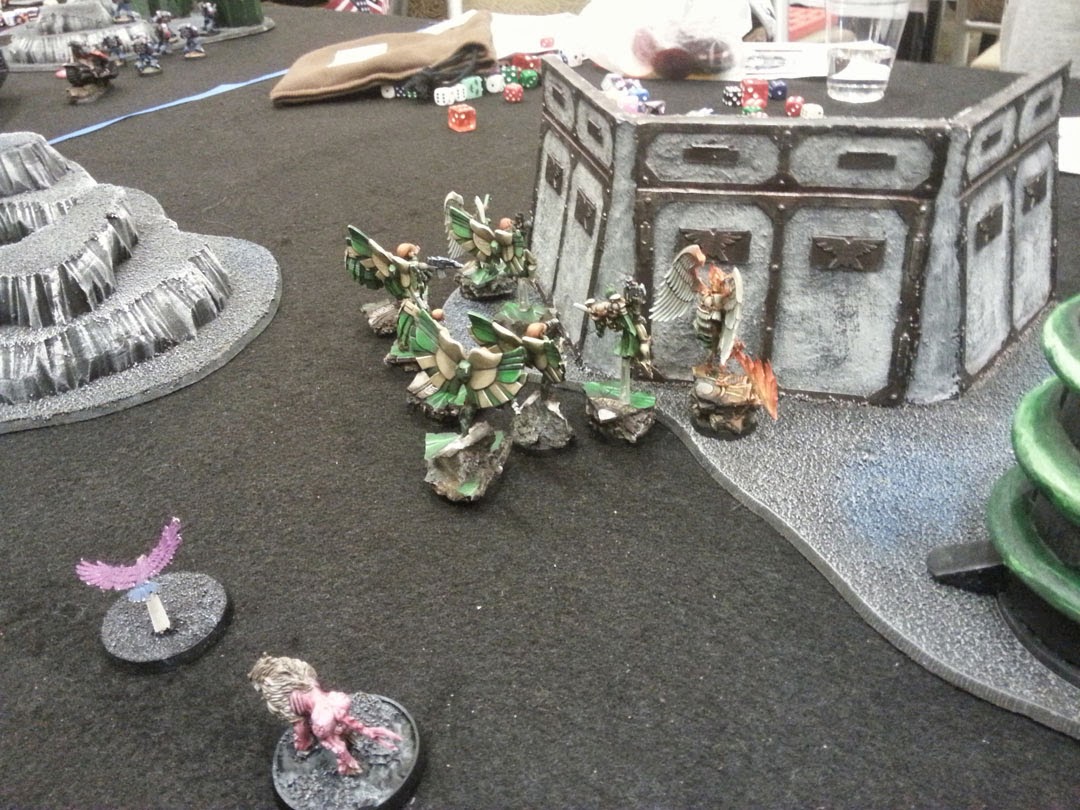 Then they all went away.  Rinse and repeat.

All the troops set up in the snow.  We did have close to 100 inches this winter, after all.  Get out your snowshoes! 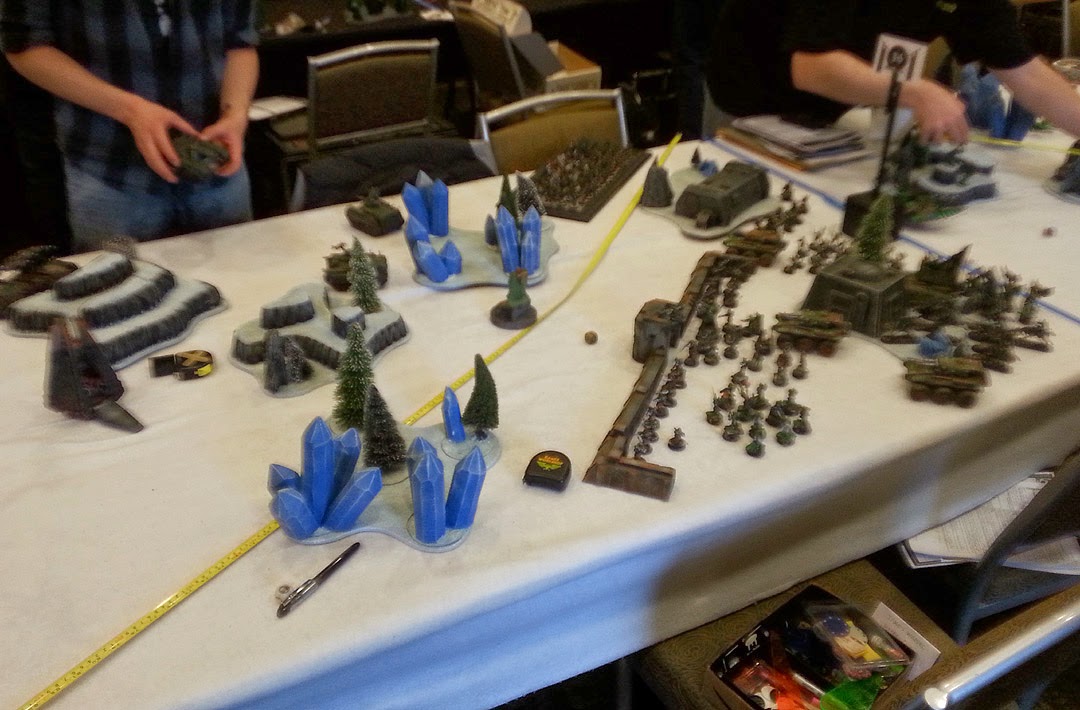 It really was fun and satisfying to see everything set up on the table like this, 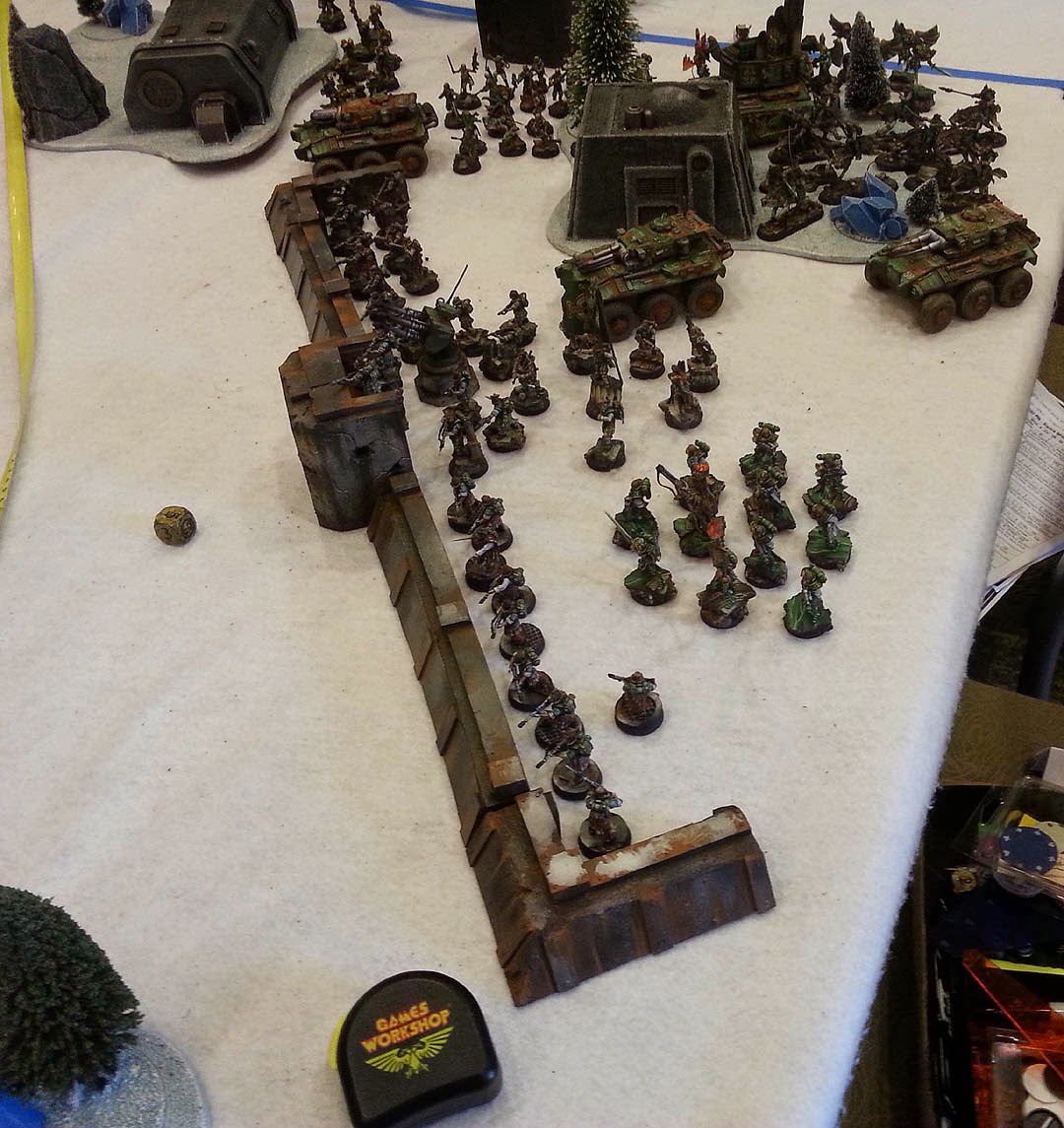 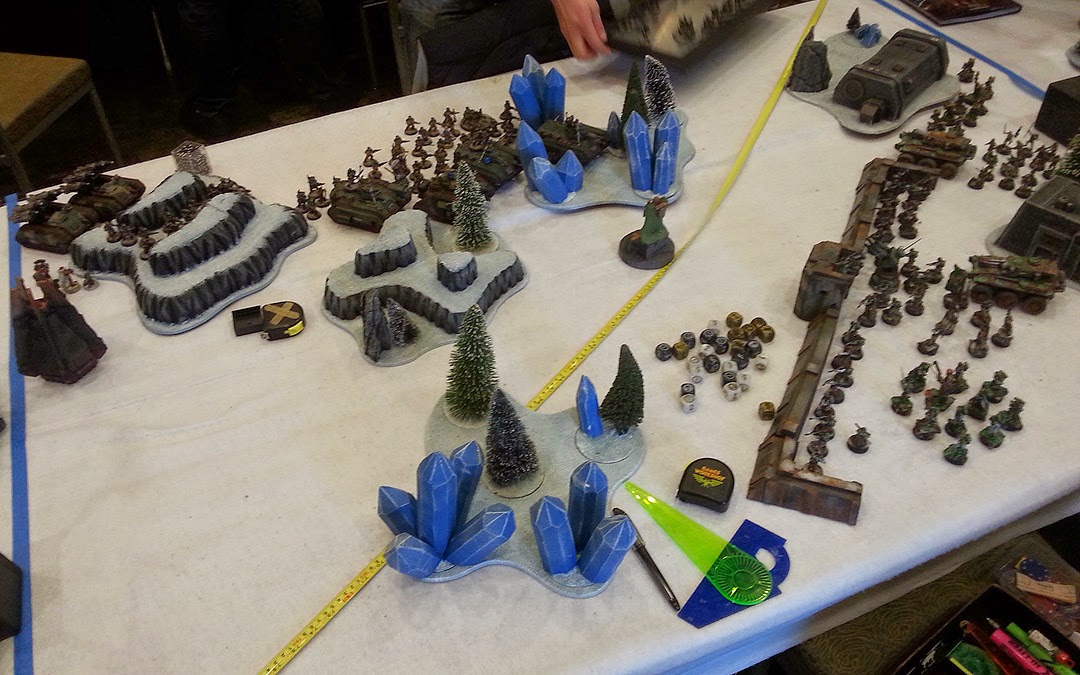 Student body right.  Getting whacked behind a wall that seemed to be invisible, with all the psychic aided twin liked weapons and no cover saves.  So, might as well start moving out.   Terrain pieces were an important objective here. 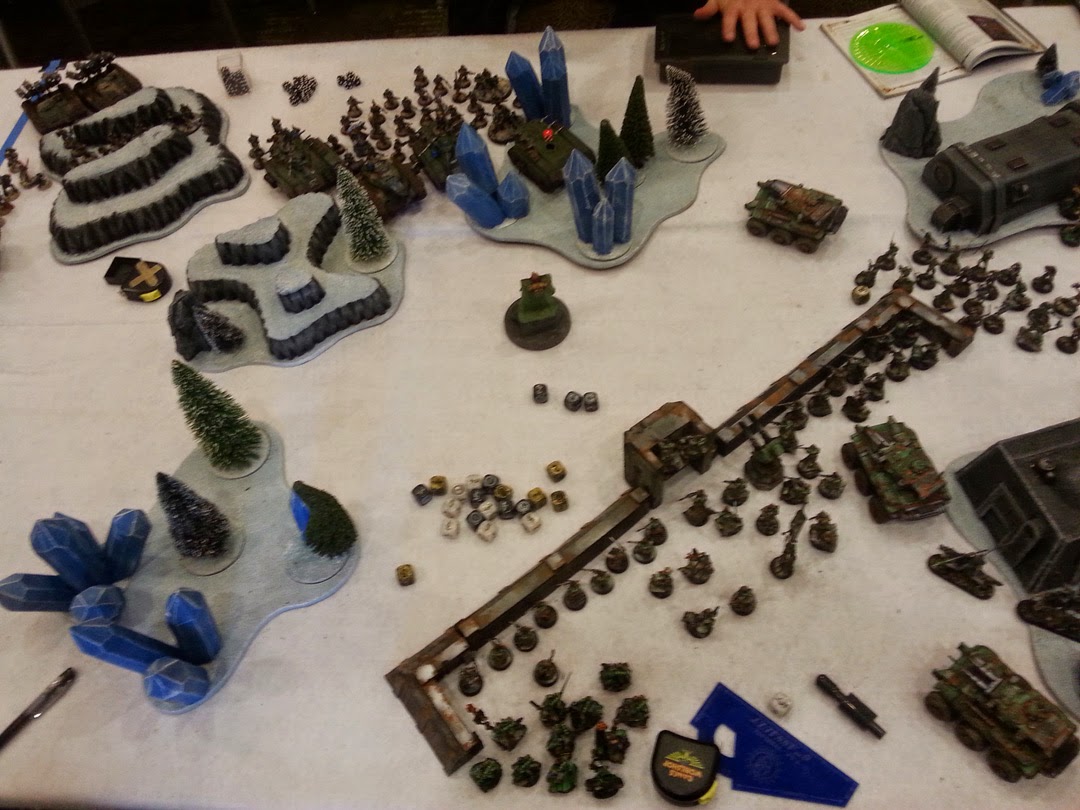 This pesky guy had been a thorn in the side of the Sisters, so he would have to be dealt with...
So, would the Sisters and their Highland Guard succumb to frostbite?  Would they withstand the constant barrage of missiles?

Stay tuned for the exciting conclusion. 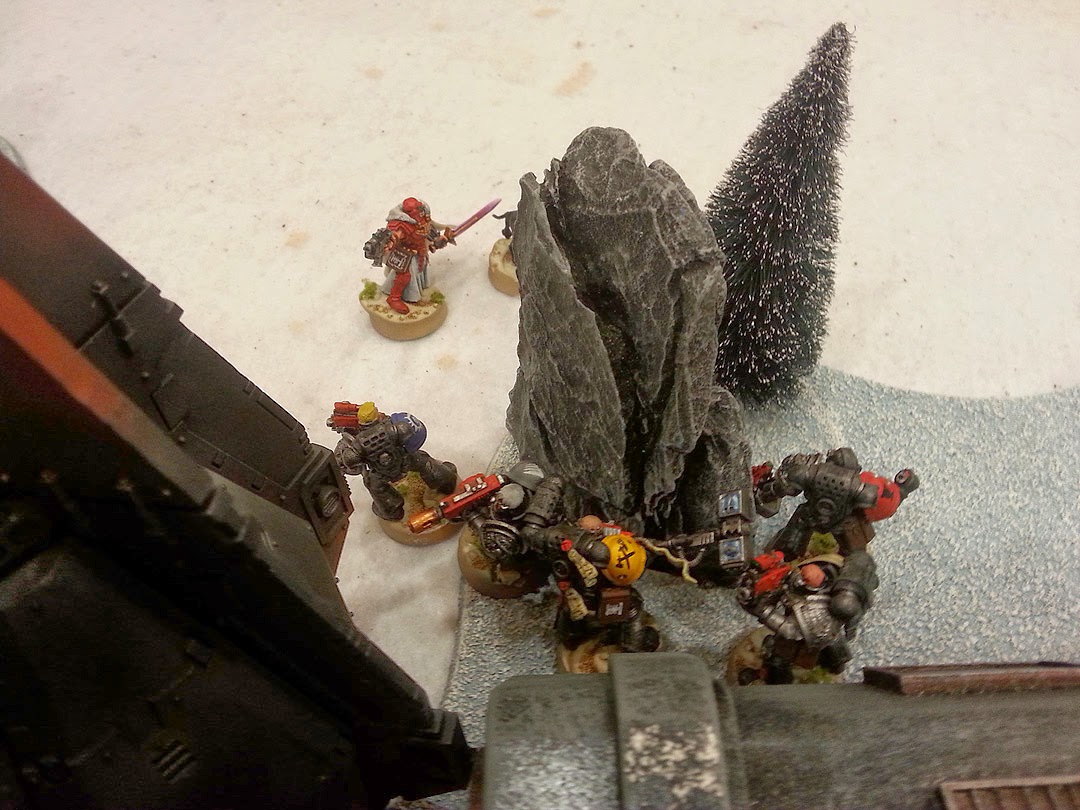 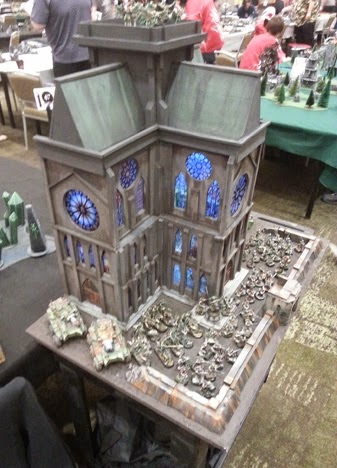 I realize that this is leaping out of sequence, but the camera that has the images of the roof construction is in the parking lot right now!

So, you get treated to the first images of the army and completed board together!

Actually, this was my first view of it as well, since I had to paint one of the squads from 2:30 this morning until 6:30 am... that was very rough, and very frantic!  There was a point where I really thought it was not going to work out... 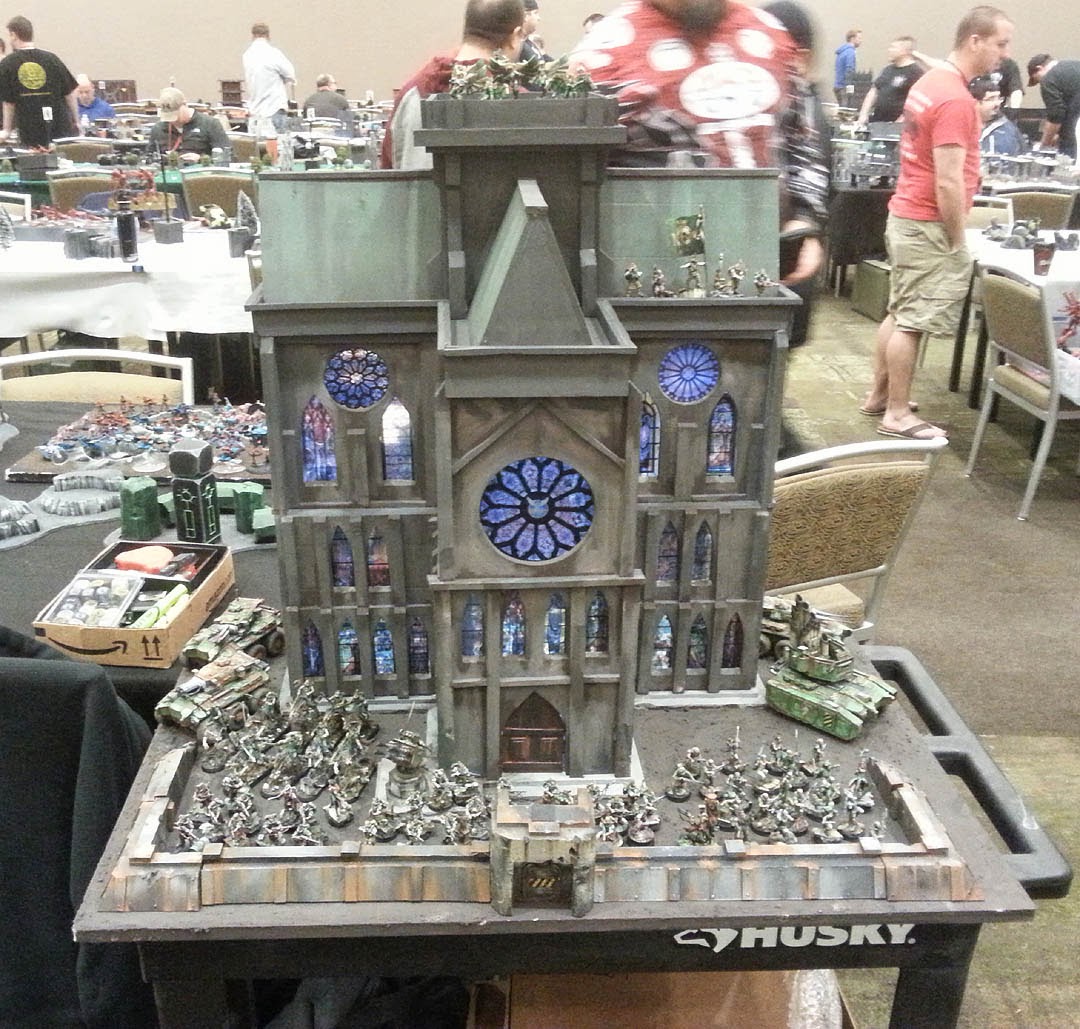 Somehow I was able to stick with it, and keep pressing ahead no matter what.  I am on hour 53 with just 2 hours sleep, so this post will be mostly just pictures :-) 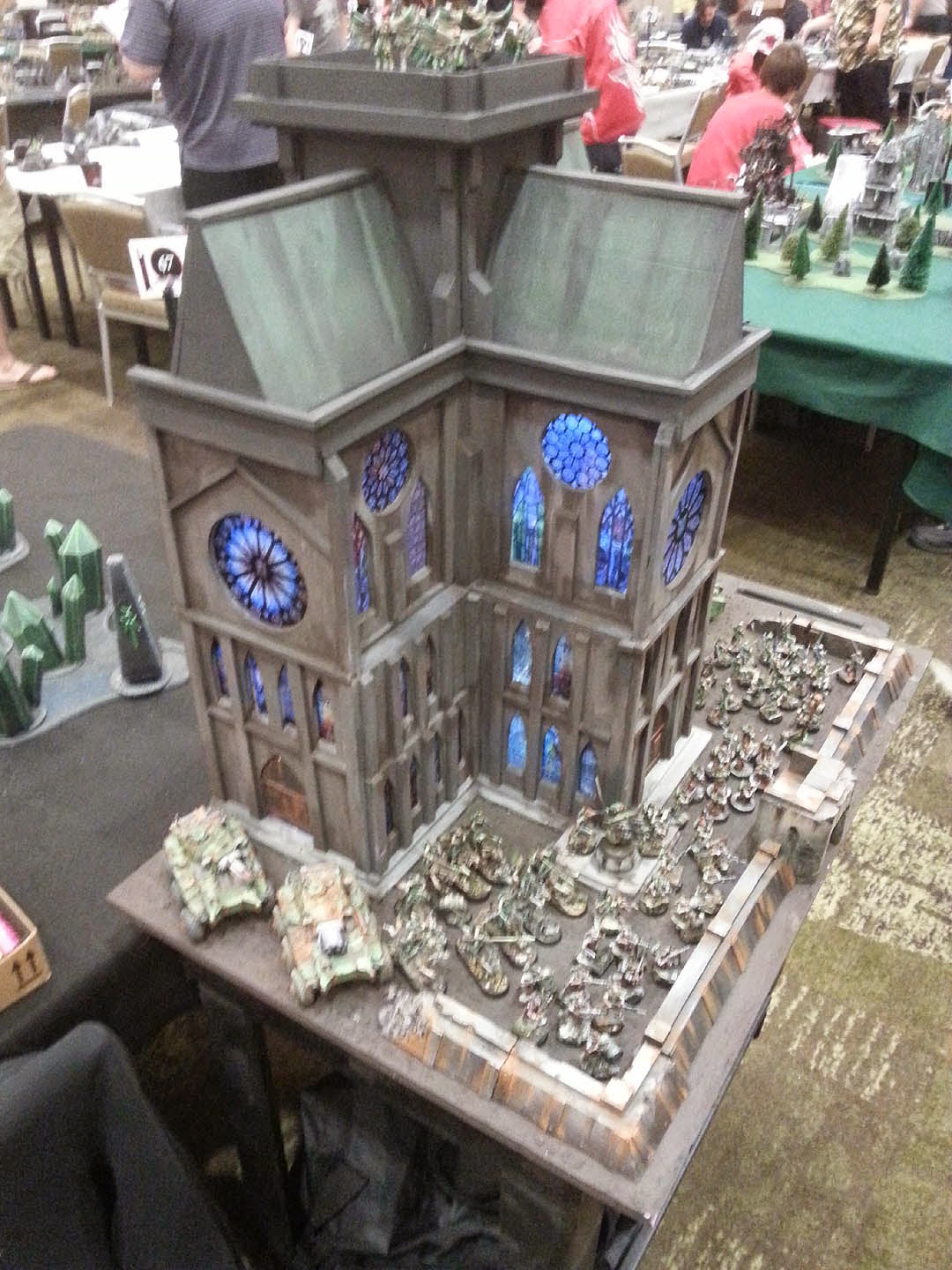 I was so rewarding to see it all together!  This project in particular was very daunting, given all the other mayhem going on around it. 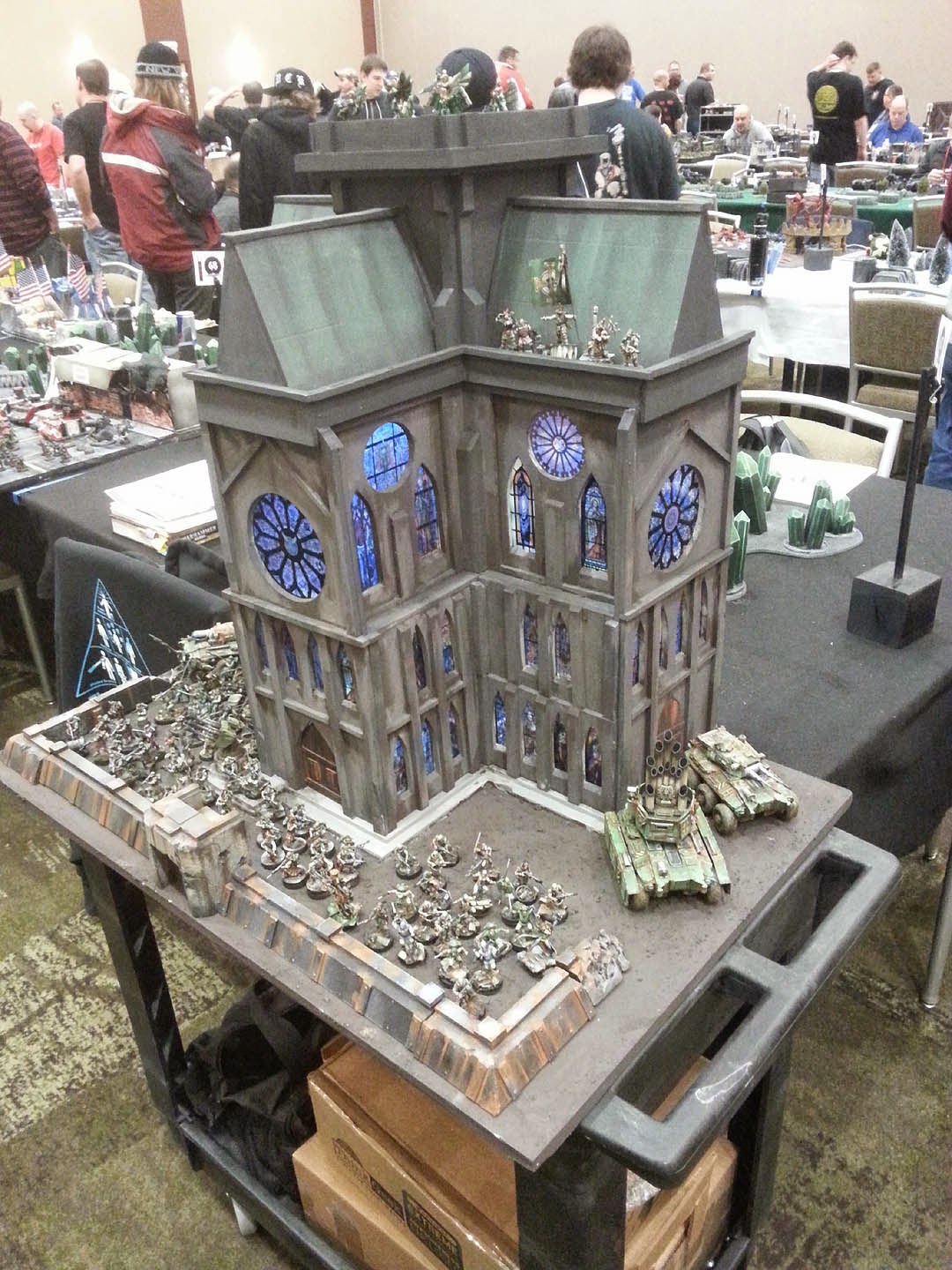 I was also nice for Victoria to see it just before the first round was to begin.  Many thanks to her and Mr. Justin for helping make it all possible!

Thanks to Cathy, Ray, Rich, Jon, Caius, Domus, Marty, Dennis and many others for giving me so much help in so many ways.  This was the one project that had to succeed, regardless of physical and mental costs :-) 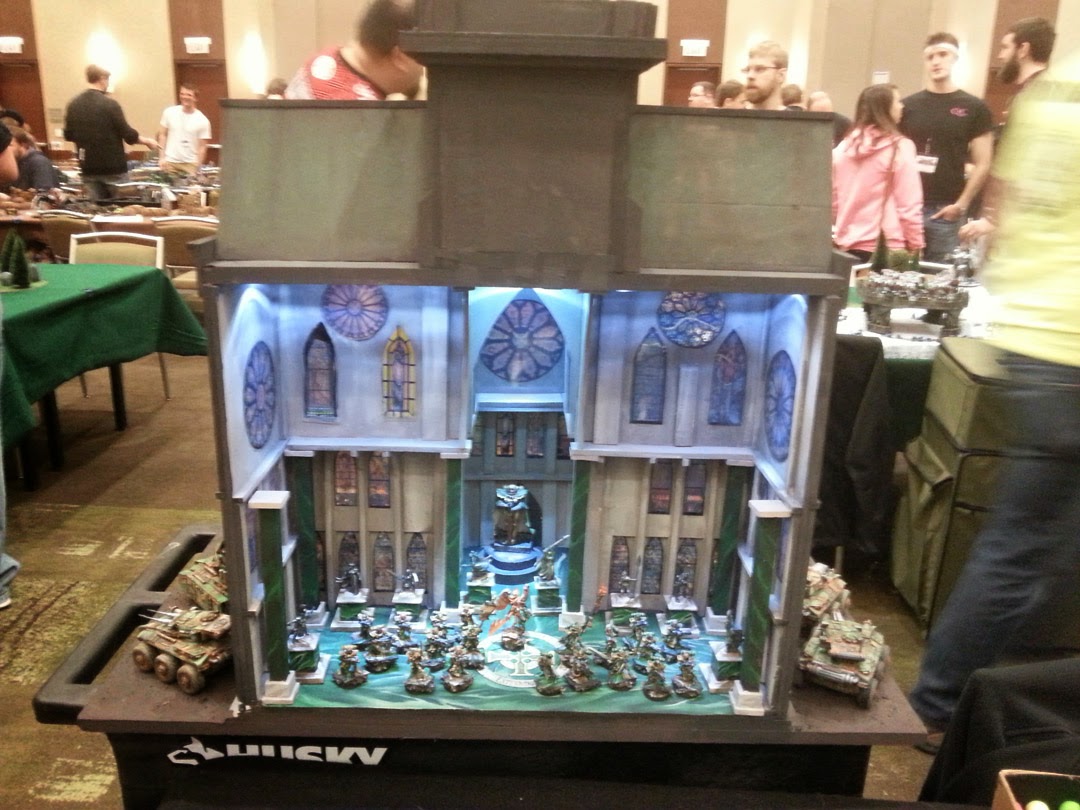 Thanks to everyone for stopping by with kind words... and votes as well!!! 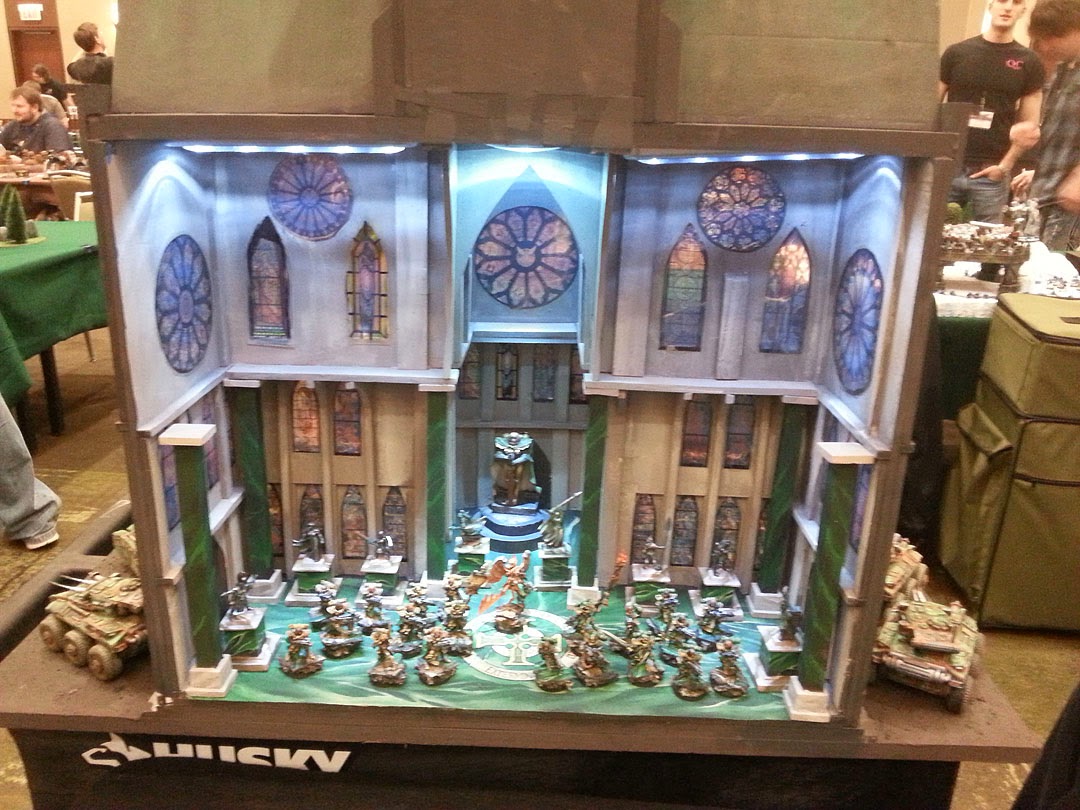 Yes, I love my new cart!  It made it incredibly easy to move everything around! 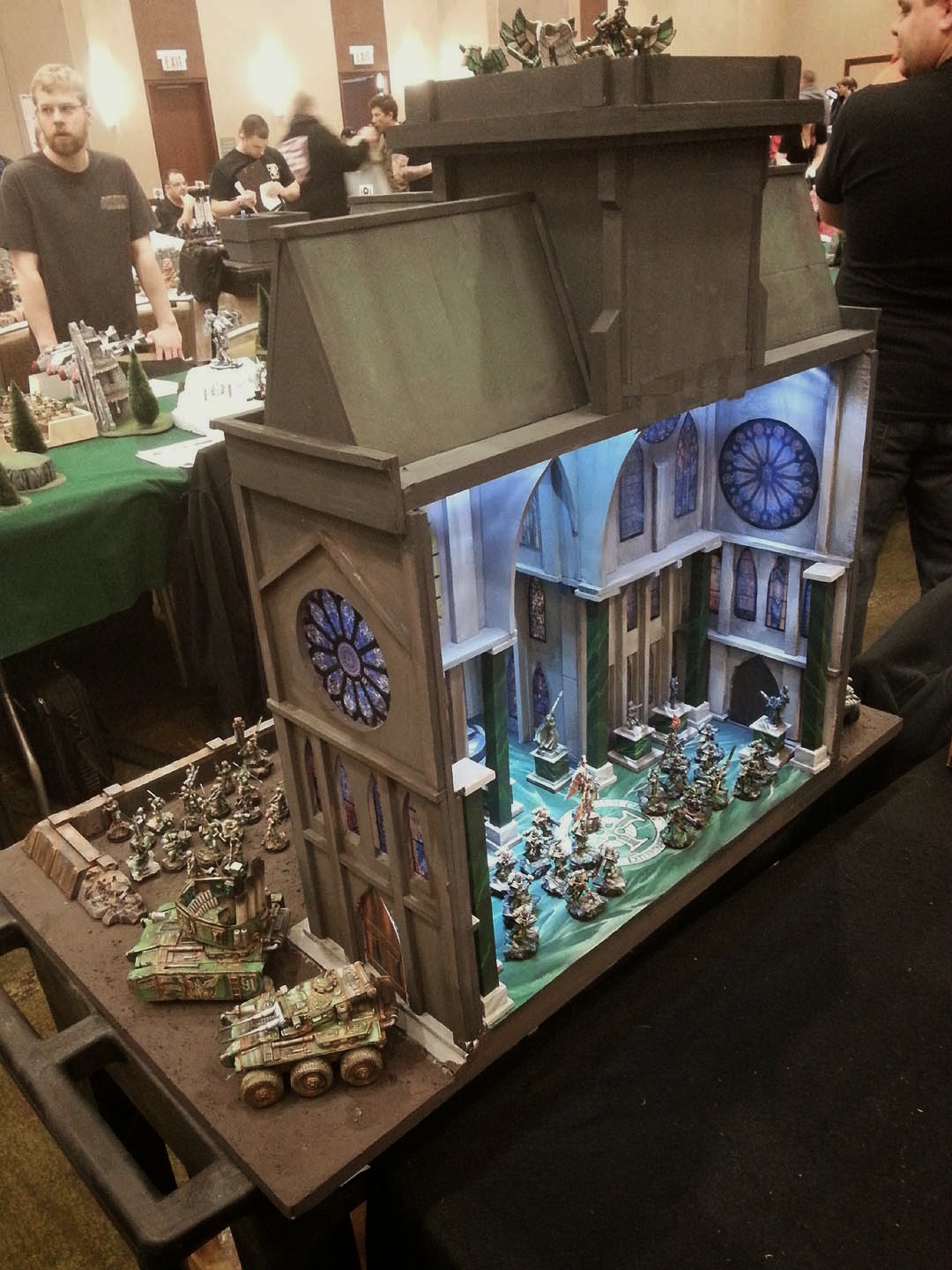 The windows had just the blue glow I was looking for with the LED lights!  Yes!!!! 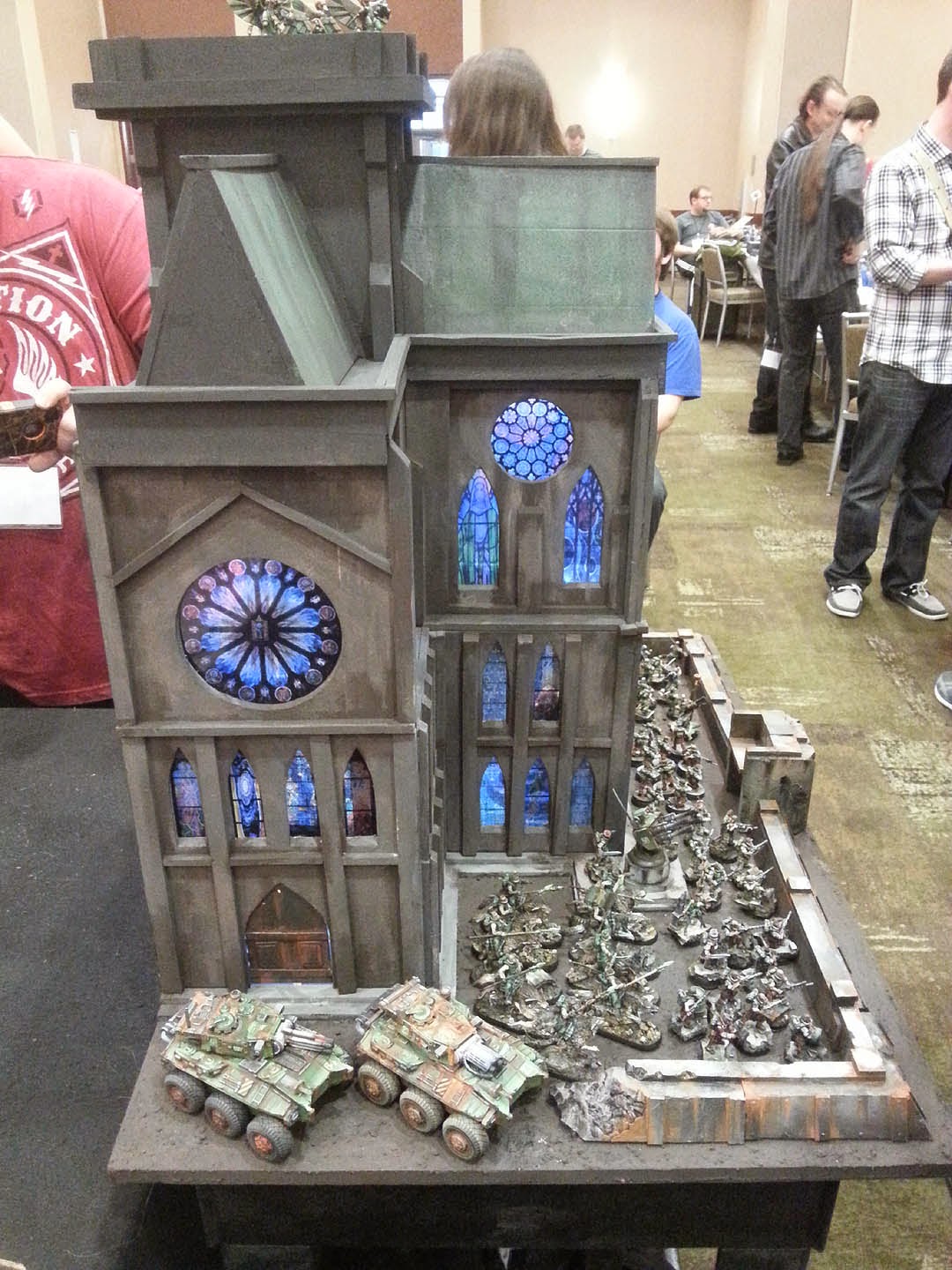 Posted by wappellious at 1:19 AM 8 comments: