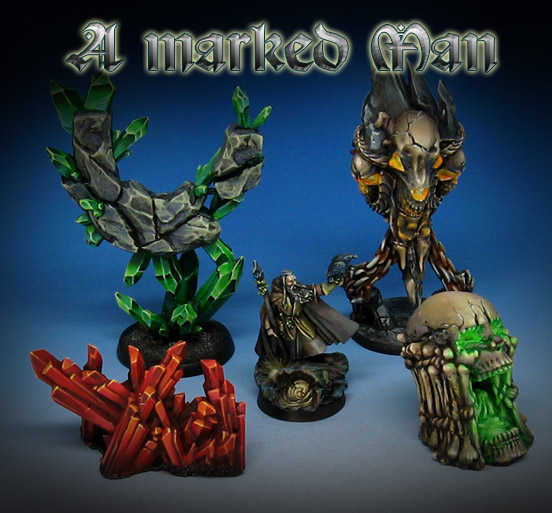 Here's a set of photos showing the objective markers which have been completed.

These are all from the recent campaign by The Edge Awakening. 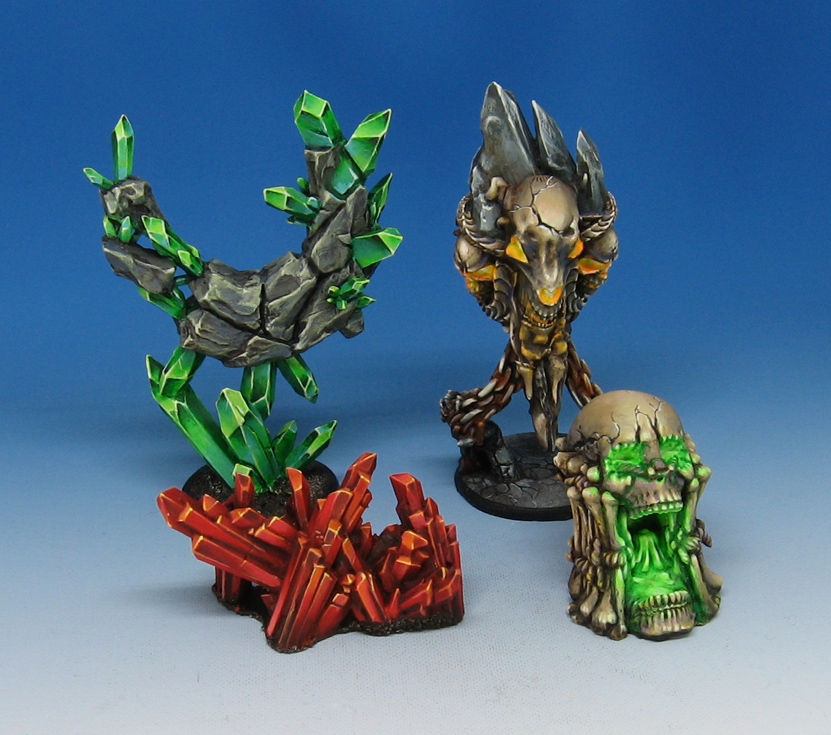 There are six markers in all, and the final two will be shown soon as well! 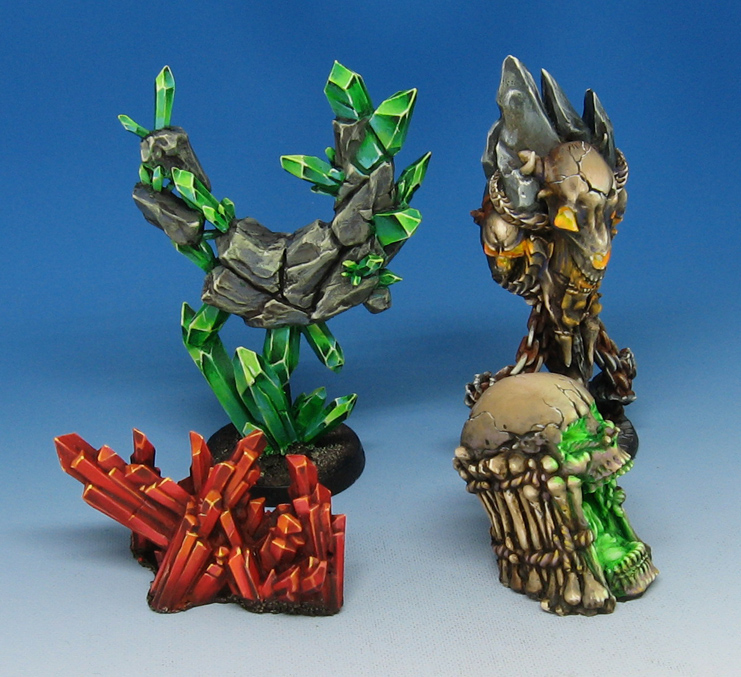 While tokens or dice can work for objective markers, it is all too often the case where you pick up that coin, token or die, and lose track completely until it's too late! 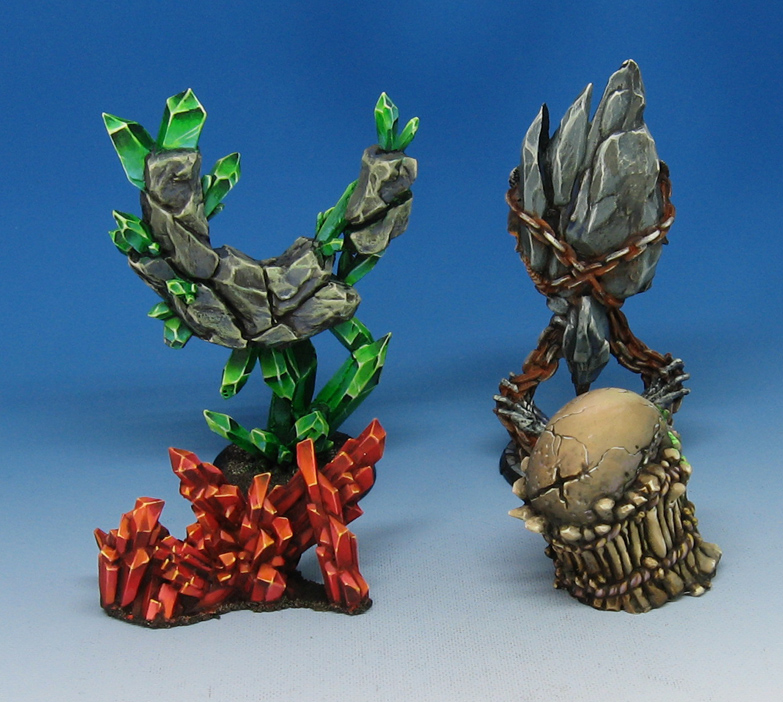 Also, these will look a lot nicer on your table, especially if you have gone to the trouble to set out nice terrain.  These also have a much better story element to them! 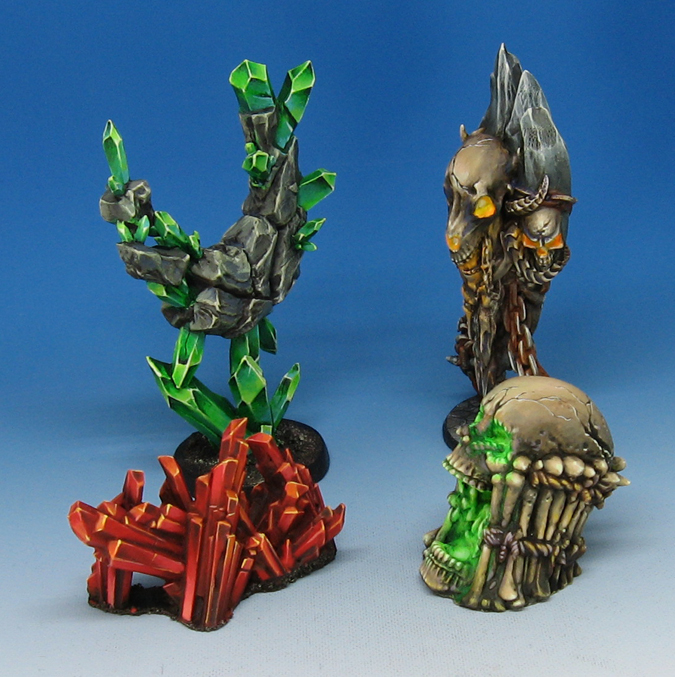 Radaghast appears once more as a scale reference. 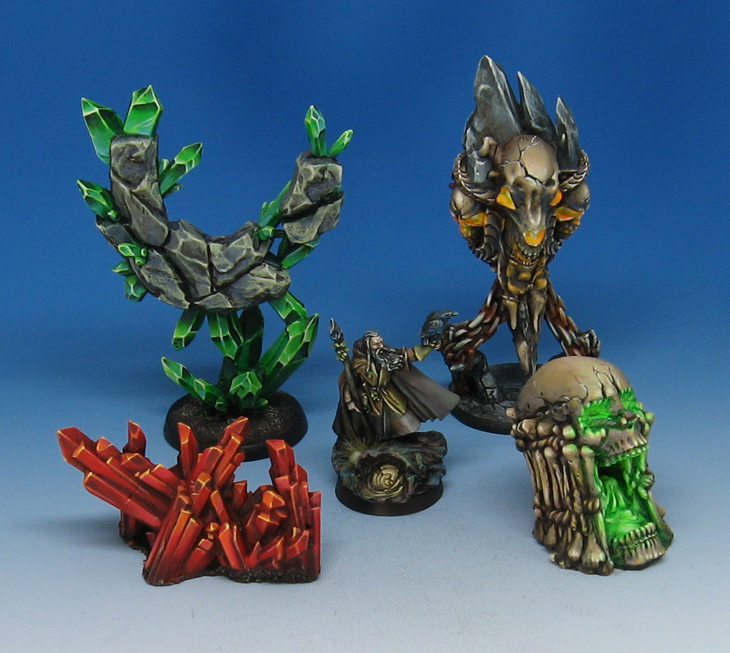 And the skull set! 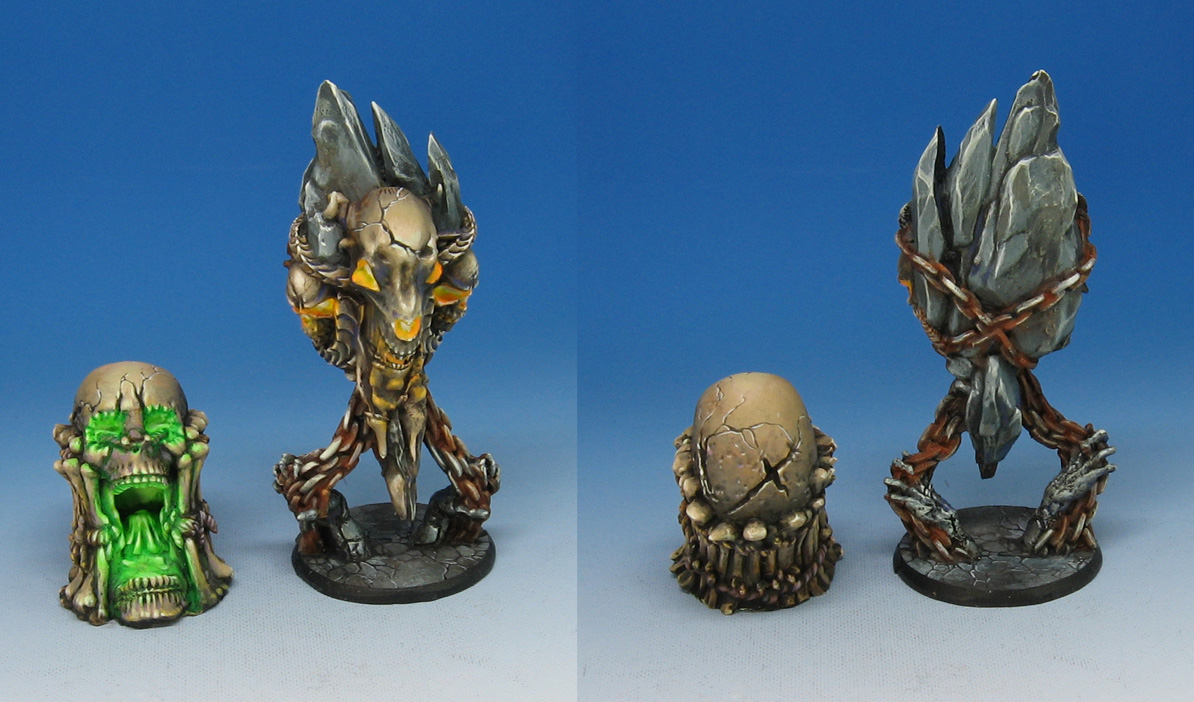 One last view.  Stay tuned for the rest of the markers! 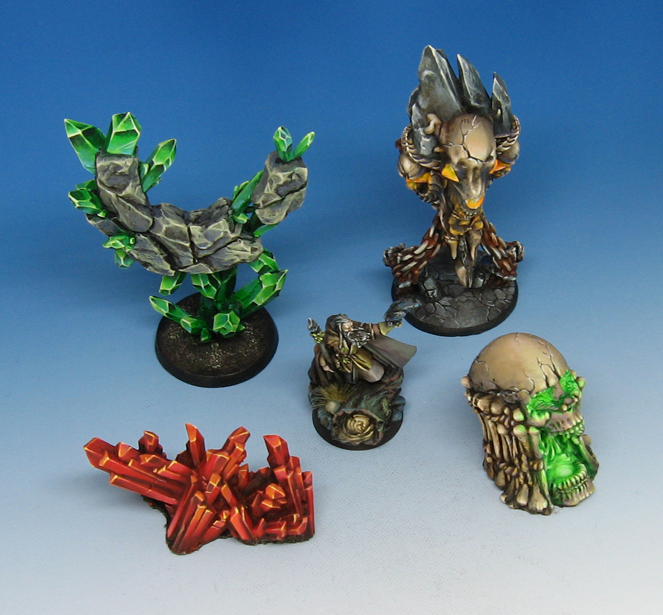 The saga of Little Wars continues!

After working for a bit with the standard Badger Patriot airbrush (using mostly primer colors as paint), I shifted back to my more typical brush work after a desperate search for supplies.

At this point, I was trying to show how I had been setting up all of the weathering techniques while I had been putting on colors with the airbrush.

There was nothing different from what I usually do with my larger brushes, except most of the color was mixing in the airbrush cup as opposed to mixing on the figure itself. 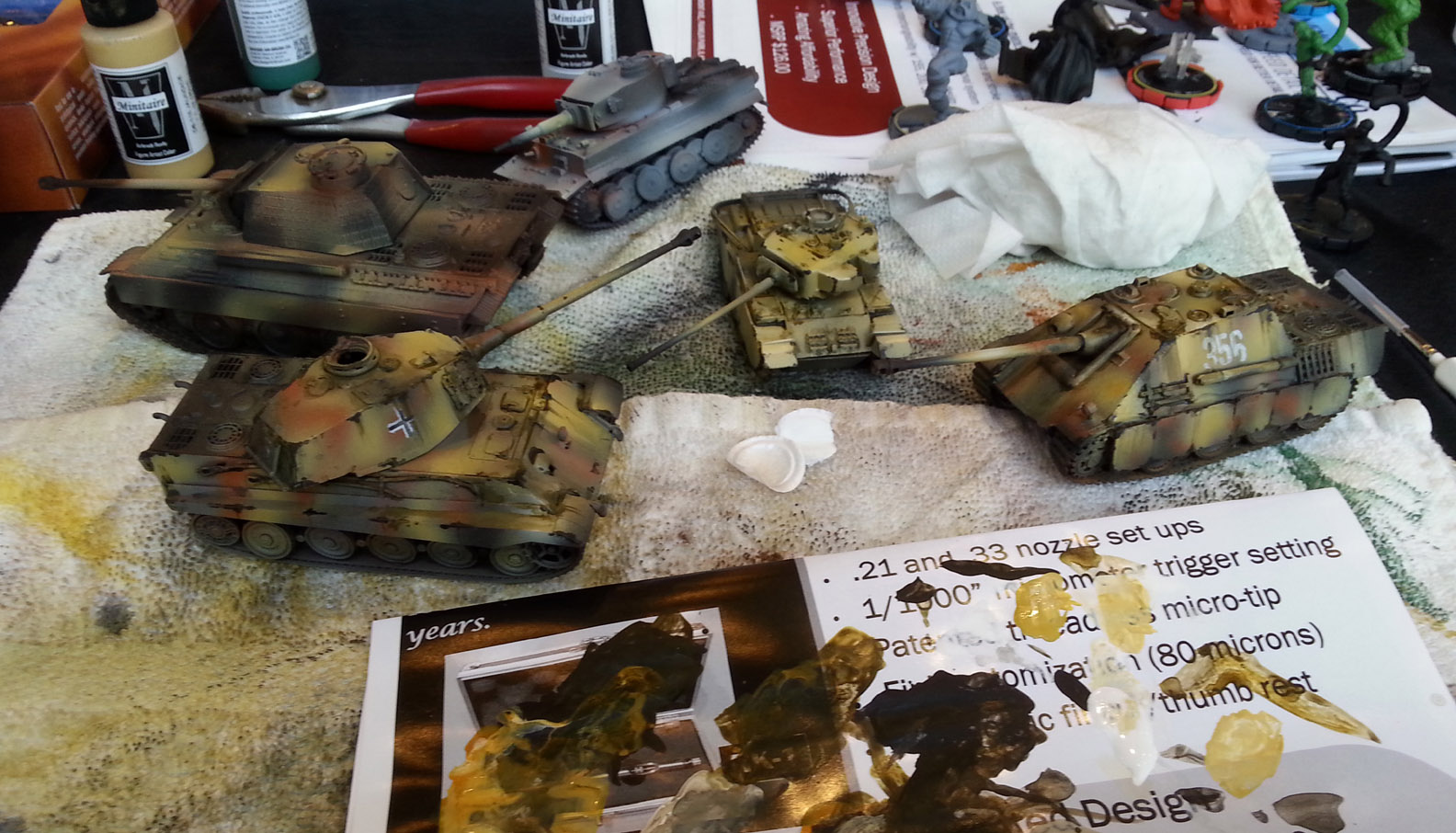 I like to place my lighter camo colors on corners or edges where I want to do a lot of paint chipping.  Obviously, the lighter the color, the easier it is to get the darker chips to be visible.

On the flip side, I made sure to have some areas which were darker and cooler in color so that lighter rust streaks would show up just as easily. 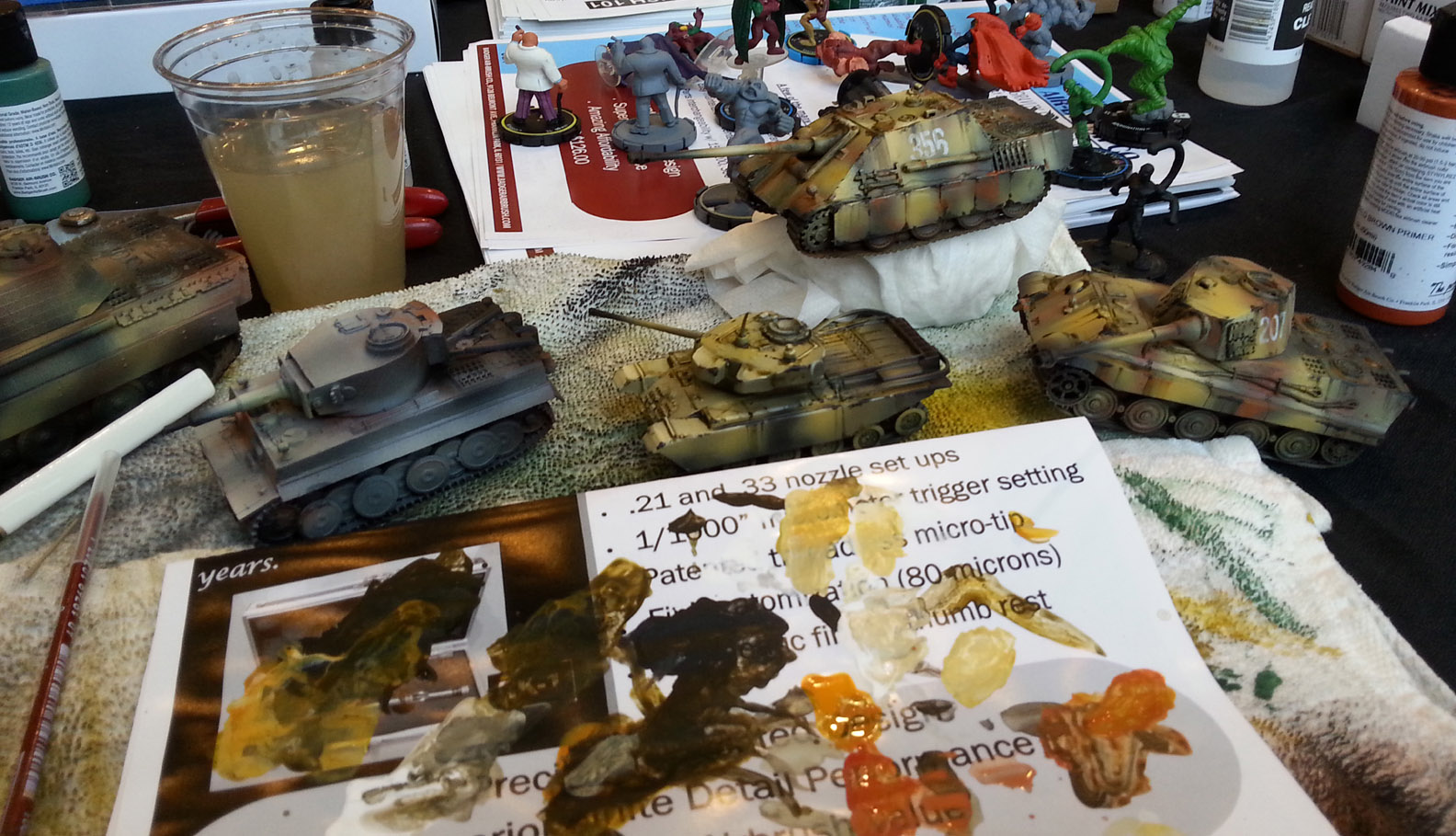 At a certain point, I tried to do what I could for markings given the extremely limited colors and magnification at hand. 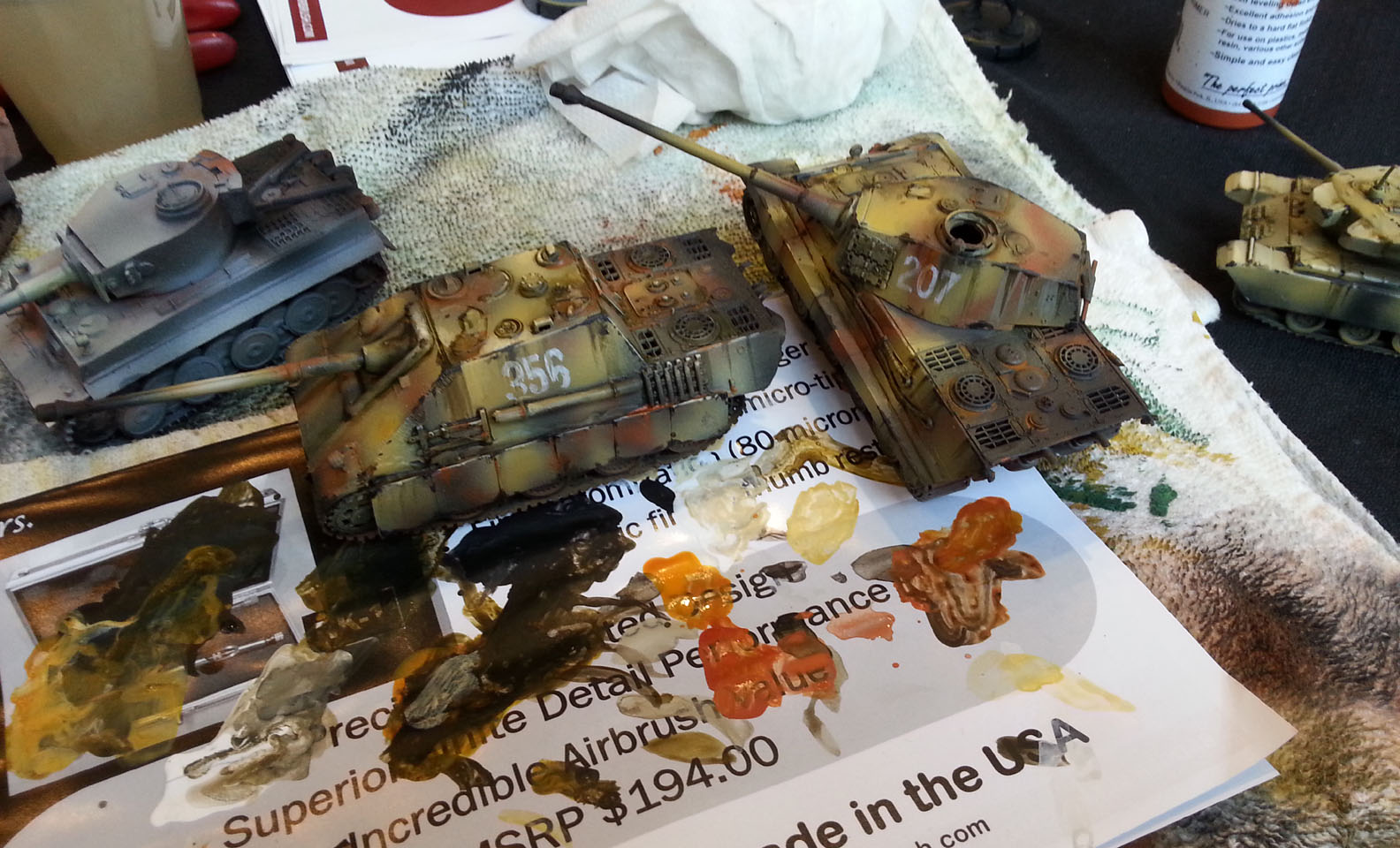 I still had to resist the urge to put rust onto the Centurion tank. :-)  You can see how the shapes of the vehicles emerge further with the darker glazes and washes applied in addition to all the weathering effects. 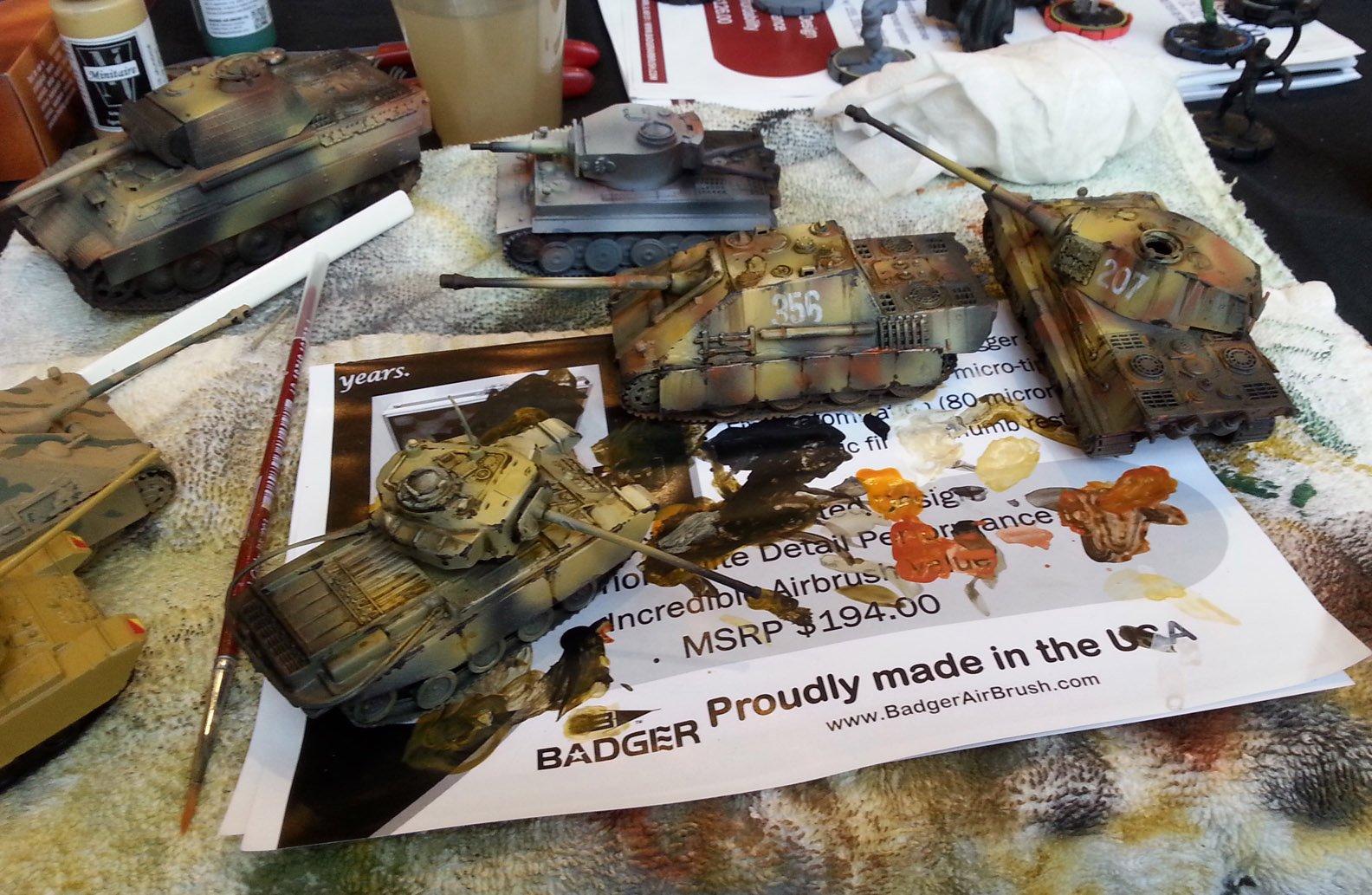 I could not resist getting more of the toy tanks, especially since I had not taken any "before" images.  This was really unexpected, so all of this was very seat of your pants flying!

Just a wee bit of difference from the original die cast toy!  Not bad for a $2 tank and perhaps 50 minutes on that particular vehicle.

Needless to say, I want to get all of these back under the magnifier and do much more precise work. 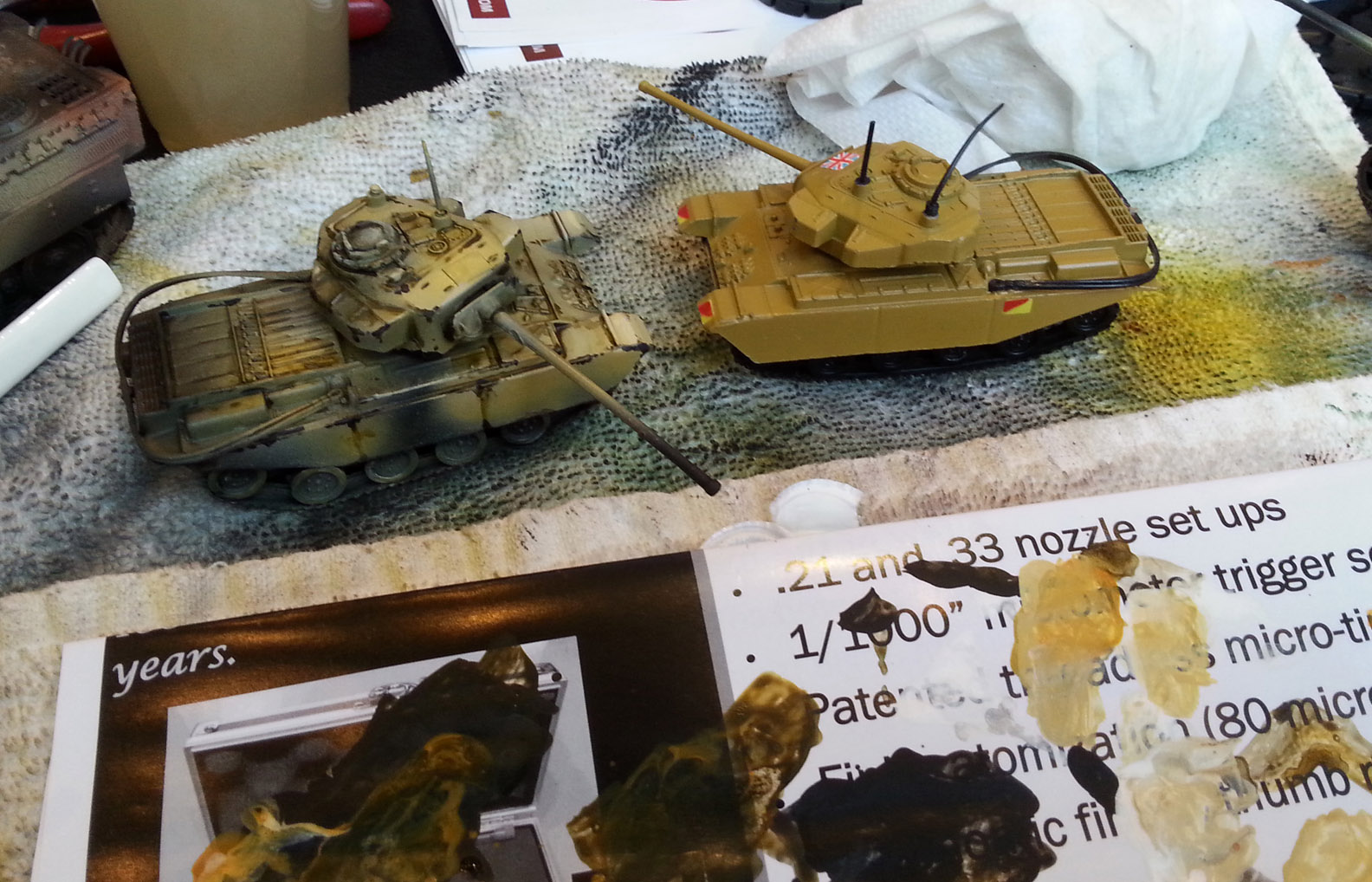 I want to add more 'dimensional' effects as well, such as mud, leaves, dust, and so on.  I have a few other extras, and I think one of them will have to be winter theme! 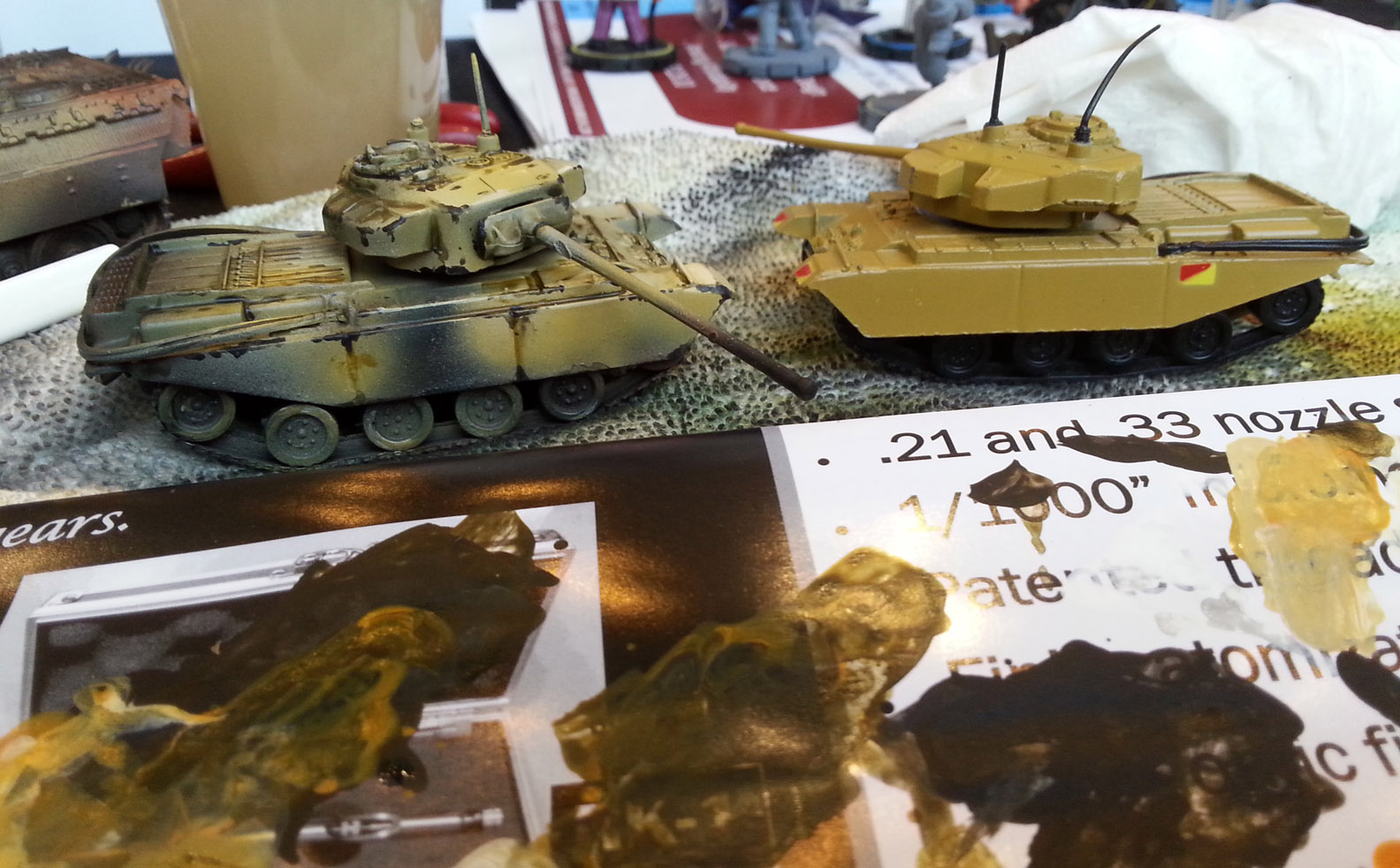 I wish that I had snagged a few more of the Tiger 1's, because I could have tried a few colors there.  Still, that one seemed the best candidate for an earlier gray color.

Just like I did with the camo pattern tanks, I tried to play off the lights and darks which I had set up during the airbrushing stage. 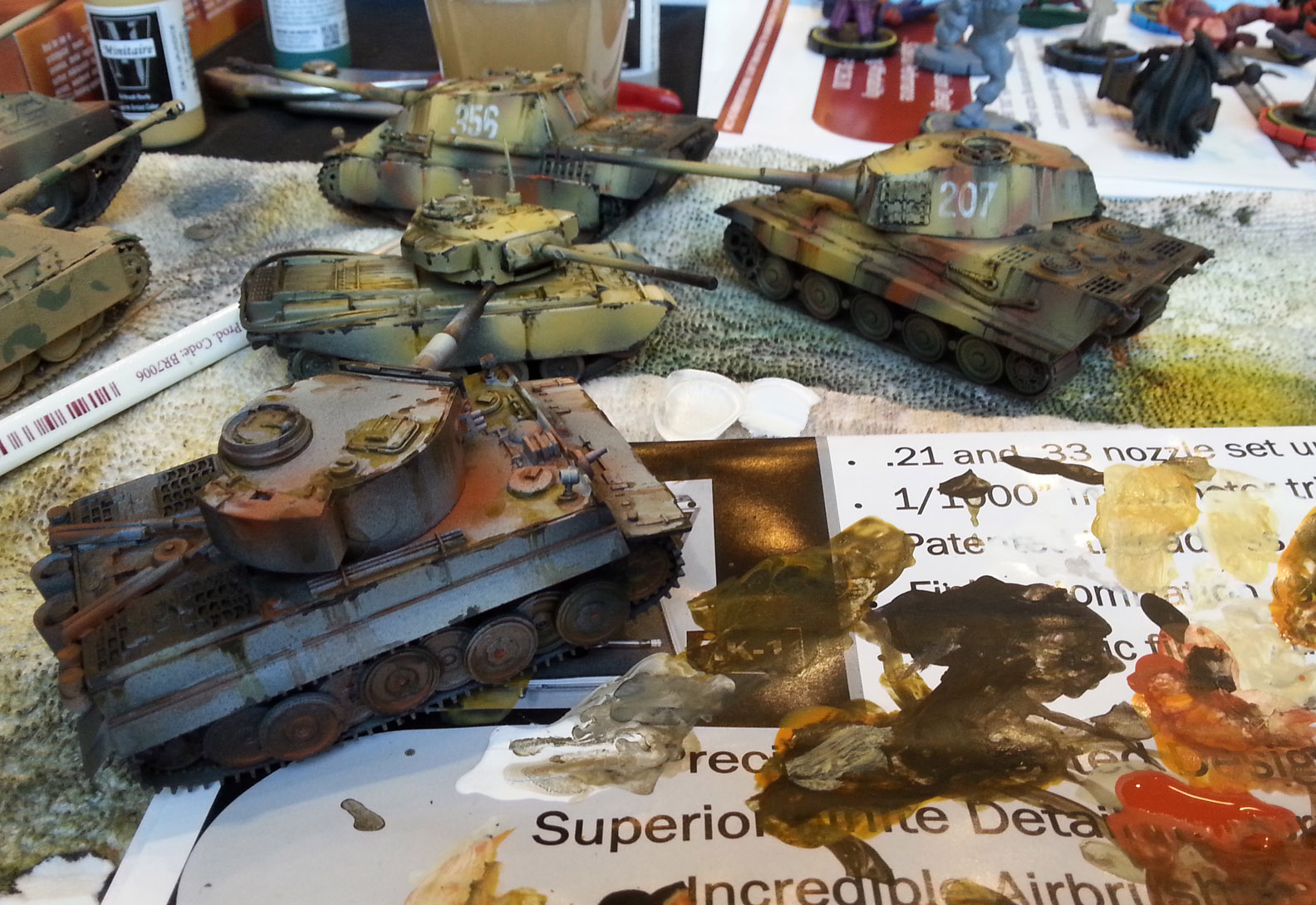 I'm not sure how well you can see it in the chaos of the palette, but I mixed some green, black primer and white primer to make some additional gray colors for the hull and top of the turret.

This was a nice contrast to the rusty tones that had been originally applied with the airbrush.

Again, this was also supposed to be a demonstration on how you can use the same airbrush paints with a regular brush, and how both tools can work very well with each other. 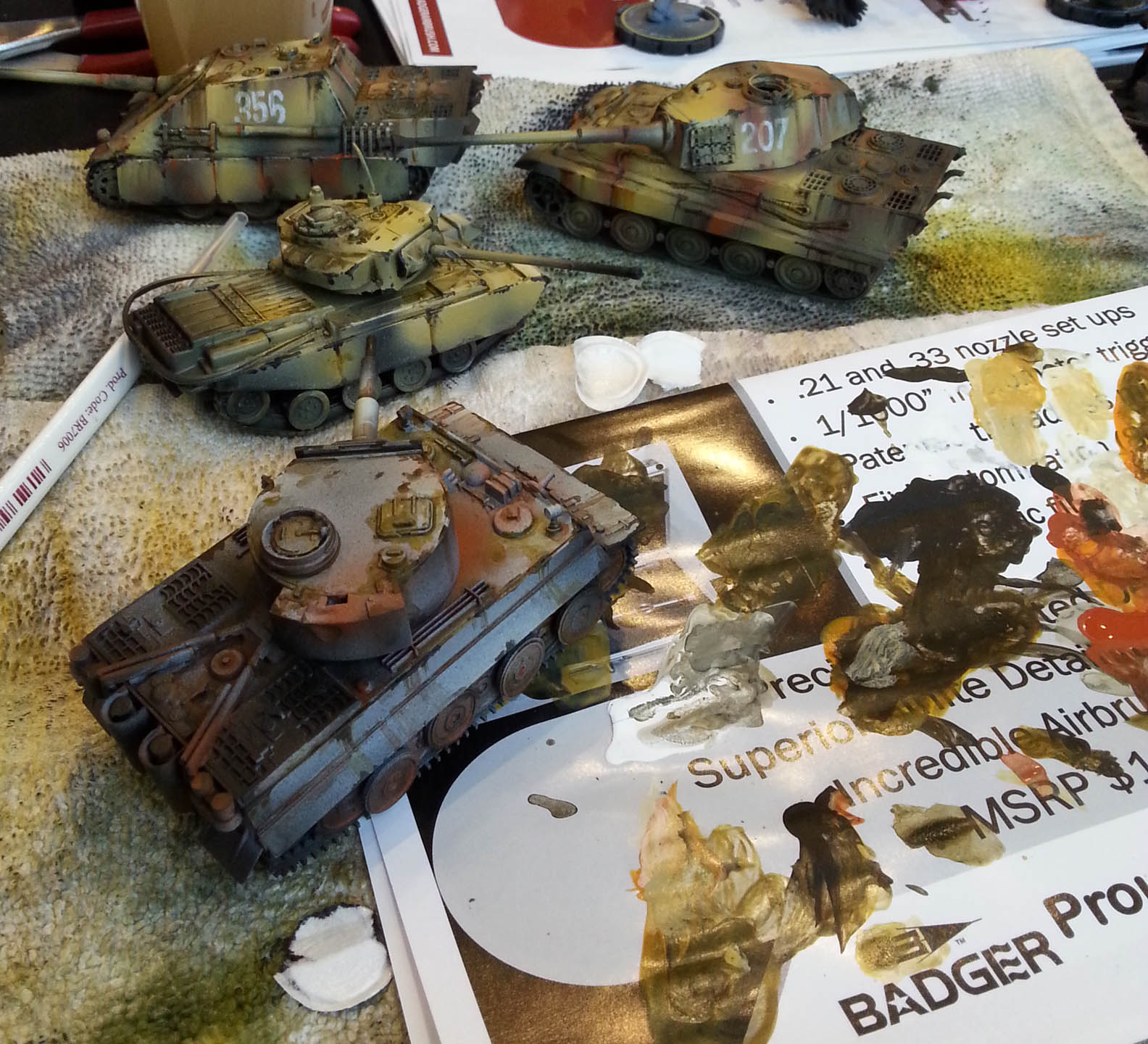 I continued to press on... you can see the potential winter scheme tank killer off to the left... 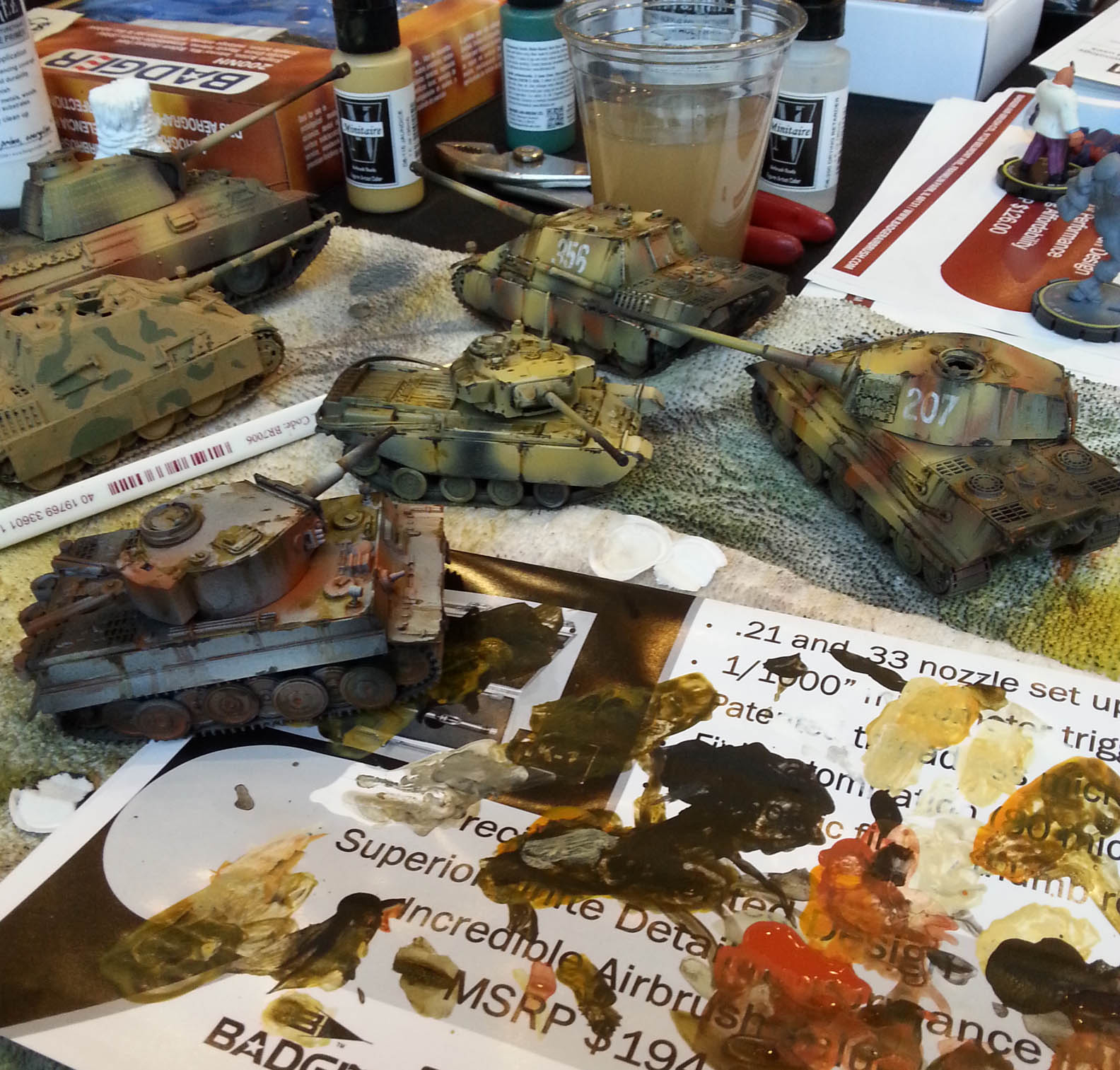 This image shoes the difference between the more developed drive wheels from the previous shot.  I went in with the regular brush and accentuated the shadow areas, especially on the wheels further back.  I used the green/white/black mix to get some difference on the gray tones here as well. 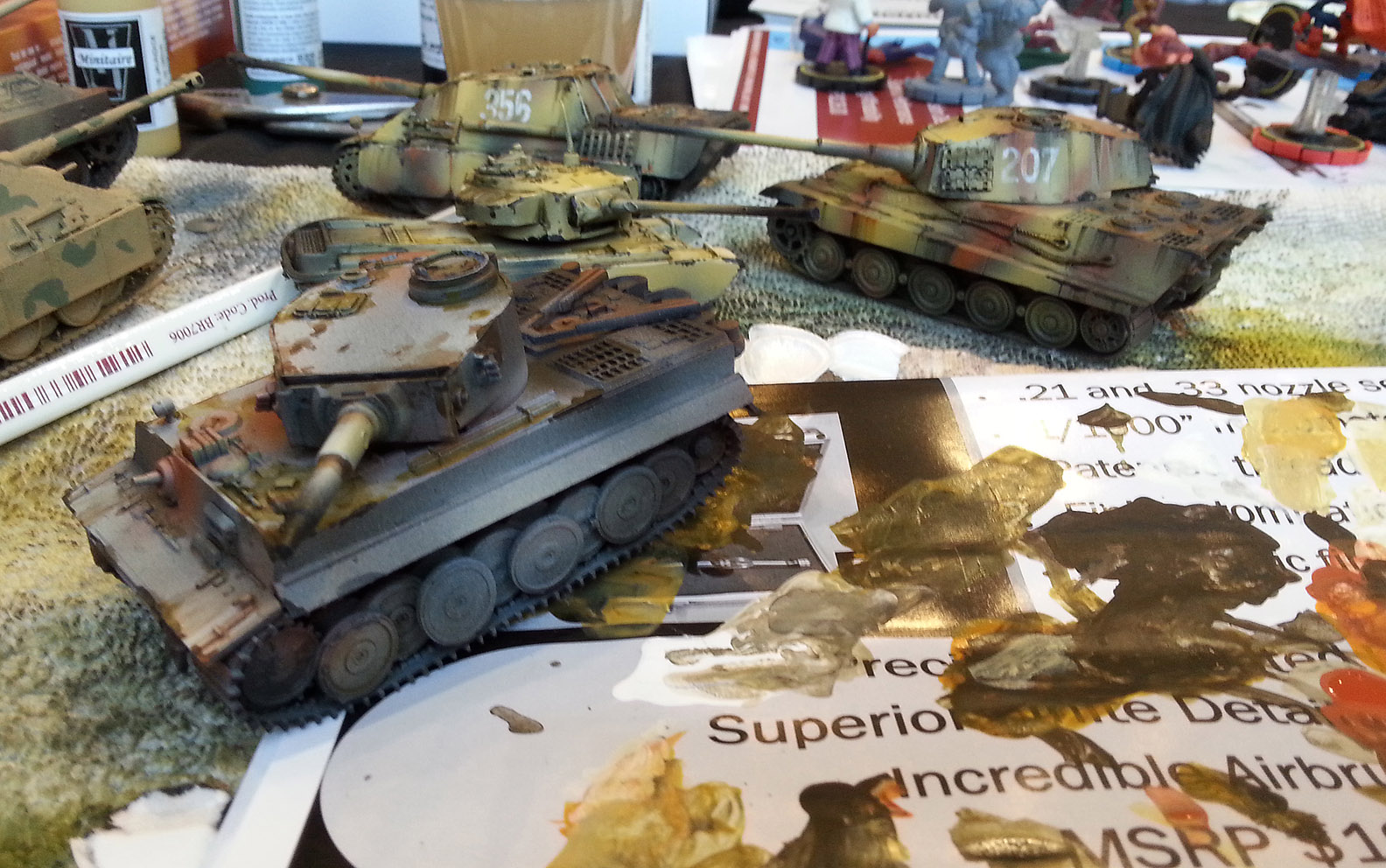 The view from above.  I was demonstrating finger painting at this stage!  No, it was not exhaustion and fatigue... it was all part of the lesson plan. 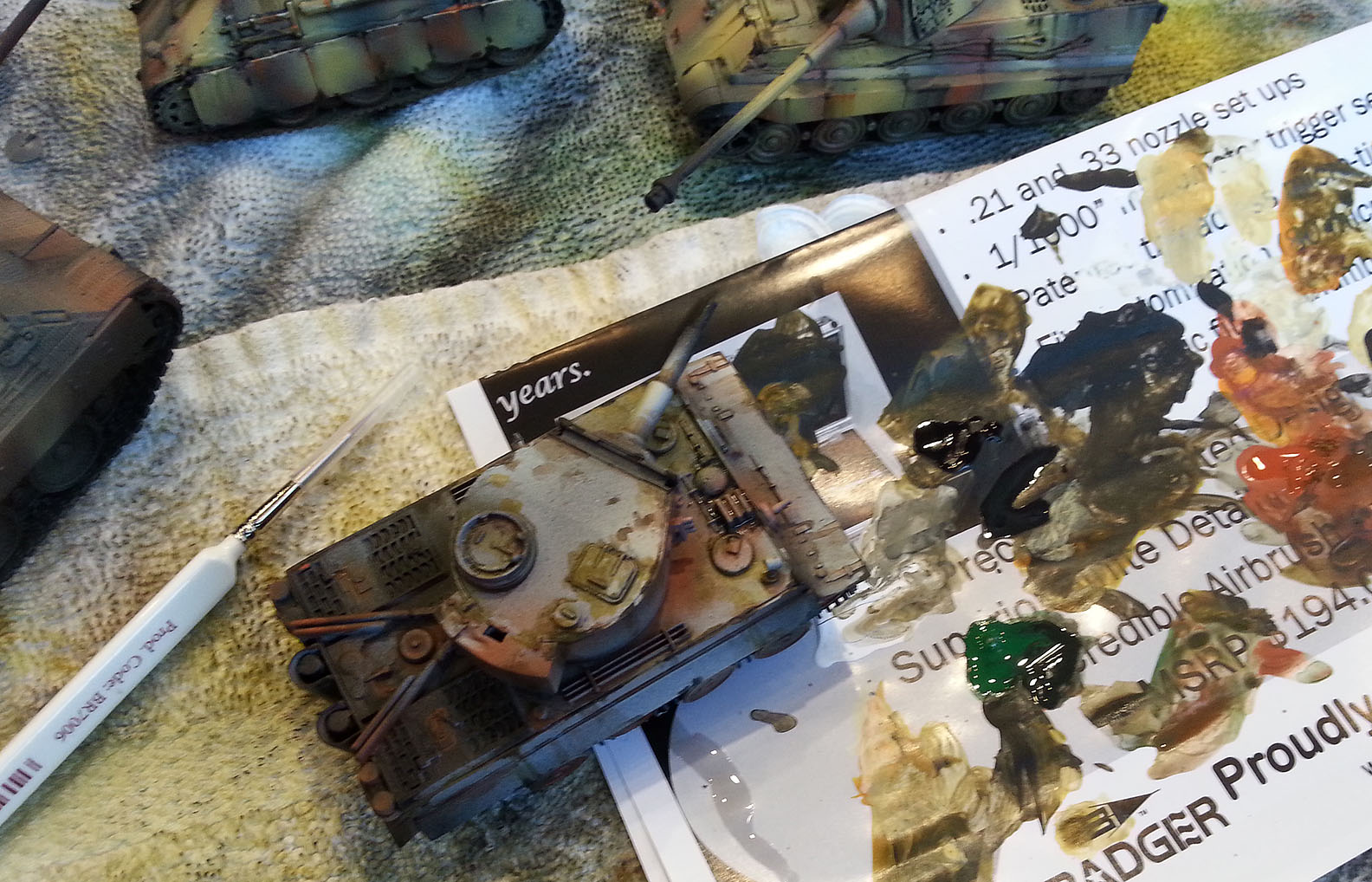 I simply applied a few dots of color to the vehicle, and then took my finger and stippled them around, creating some nice random effects.  This is a decent substitute for a number of specialized products... especially when it's all you've got available. :-)

I hope you enjoyed this journey!  There's another post coming to wrap up the Little Wars experience, and then you will see the completion of each vehicle in the coming weeks.  Stay tuned! 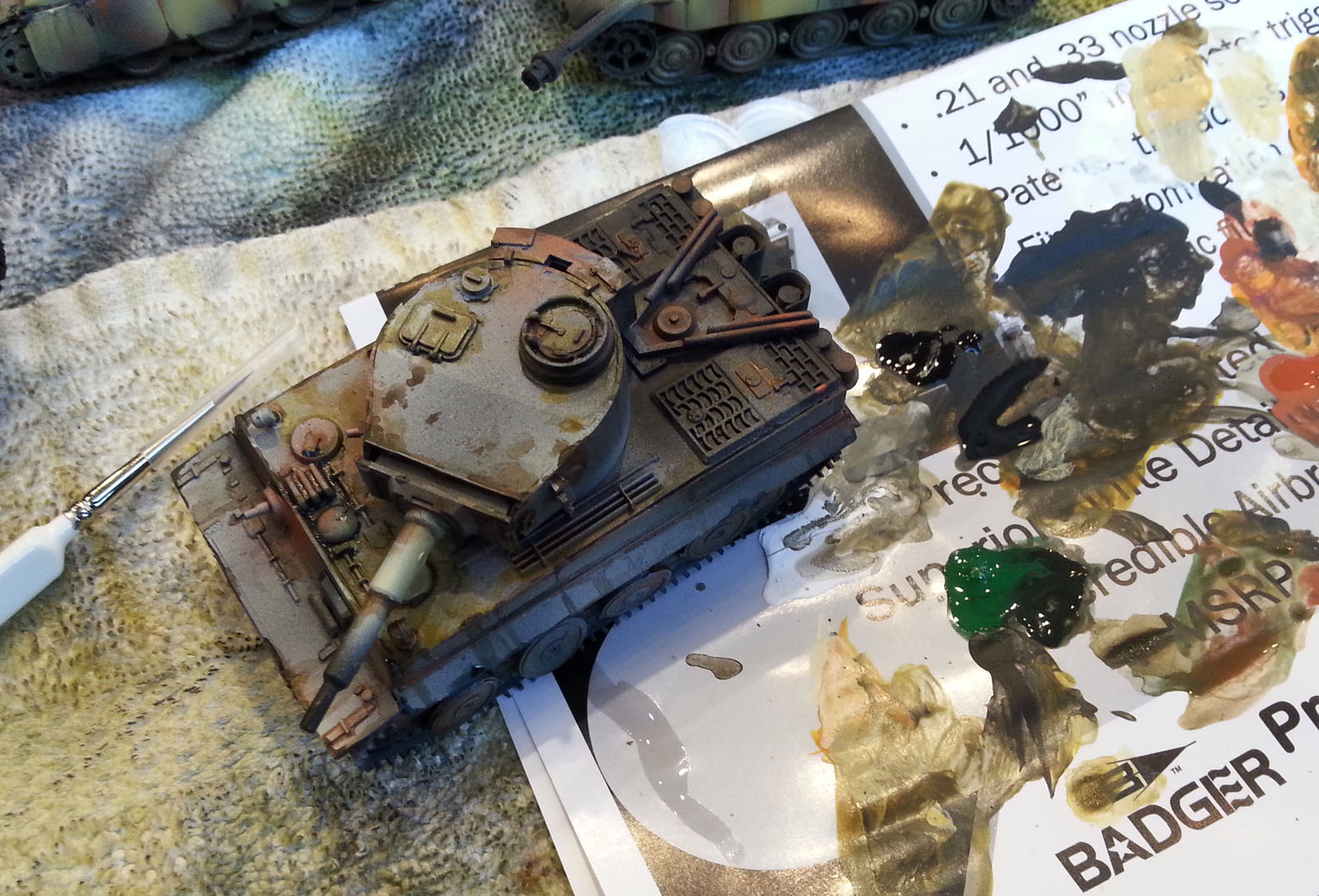 Posted by wappellious at 2:58 AM No comments: