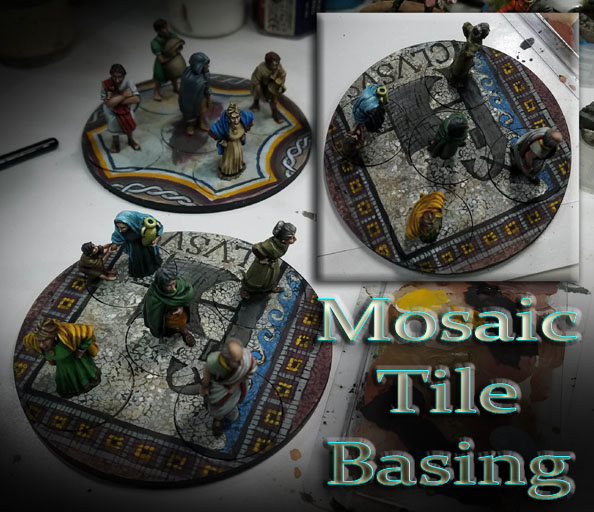 As I was finishing off the rest of the mosaic tile bases, I tried to snap a few images to show you how I make the initial design look more like mosaics than a painting.  That is not very complex, just a little more tedious! 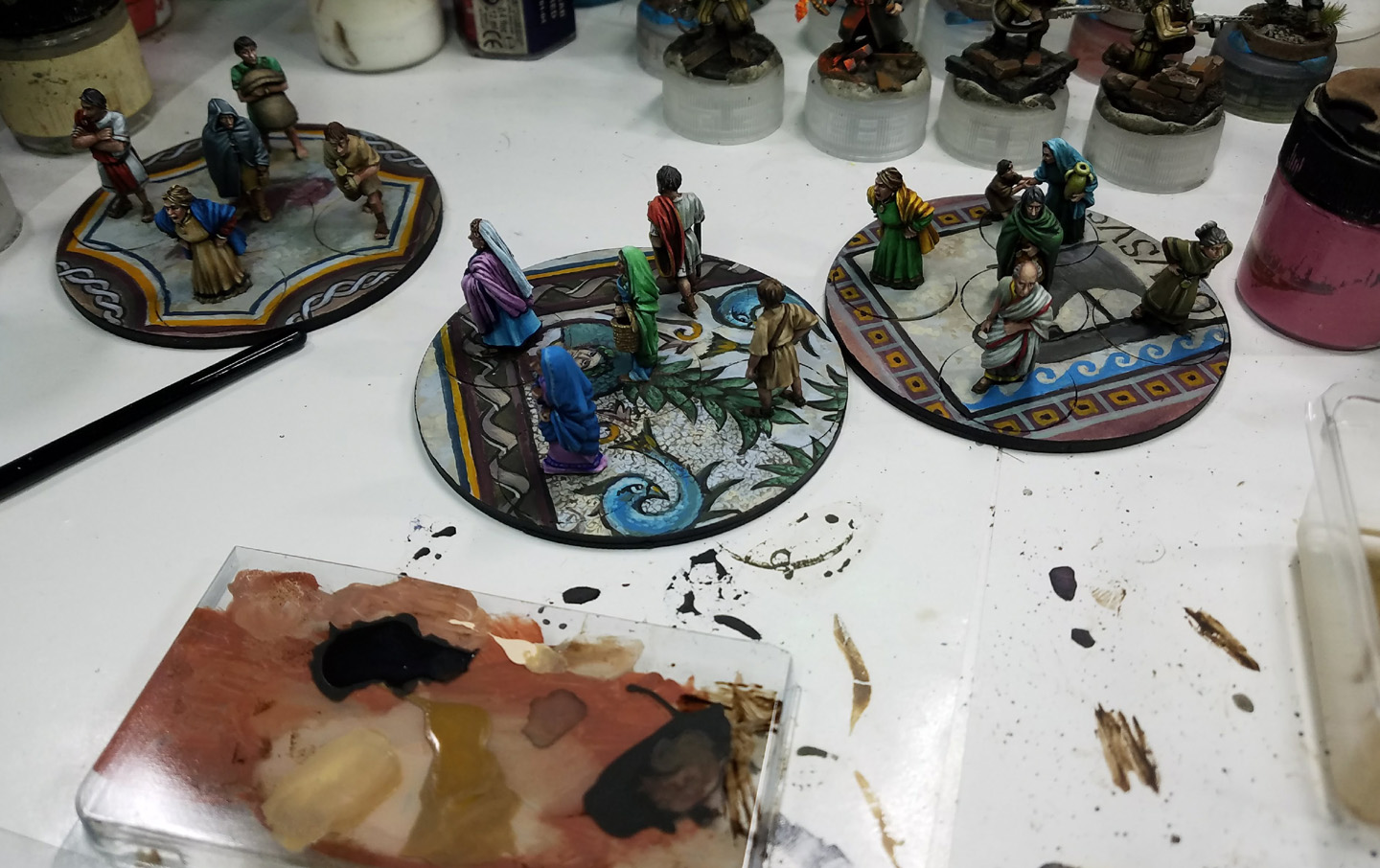 It starts with brown liner paint from Reaper, which is perfect for so many things.  You can thin it down so that it flows incredibly easily, but it still maintains much of its color integrity.  You can see how I moved the brush around to make it seem as if there were a myriad of individual tiles. 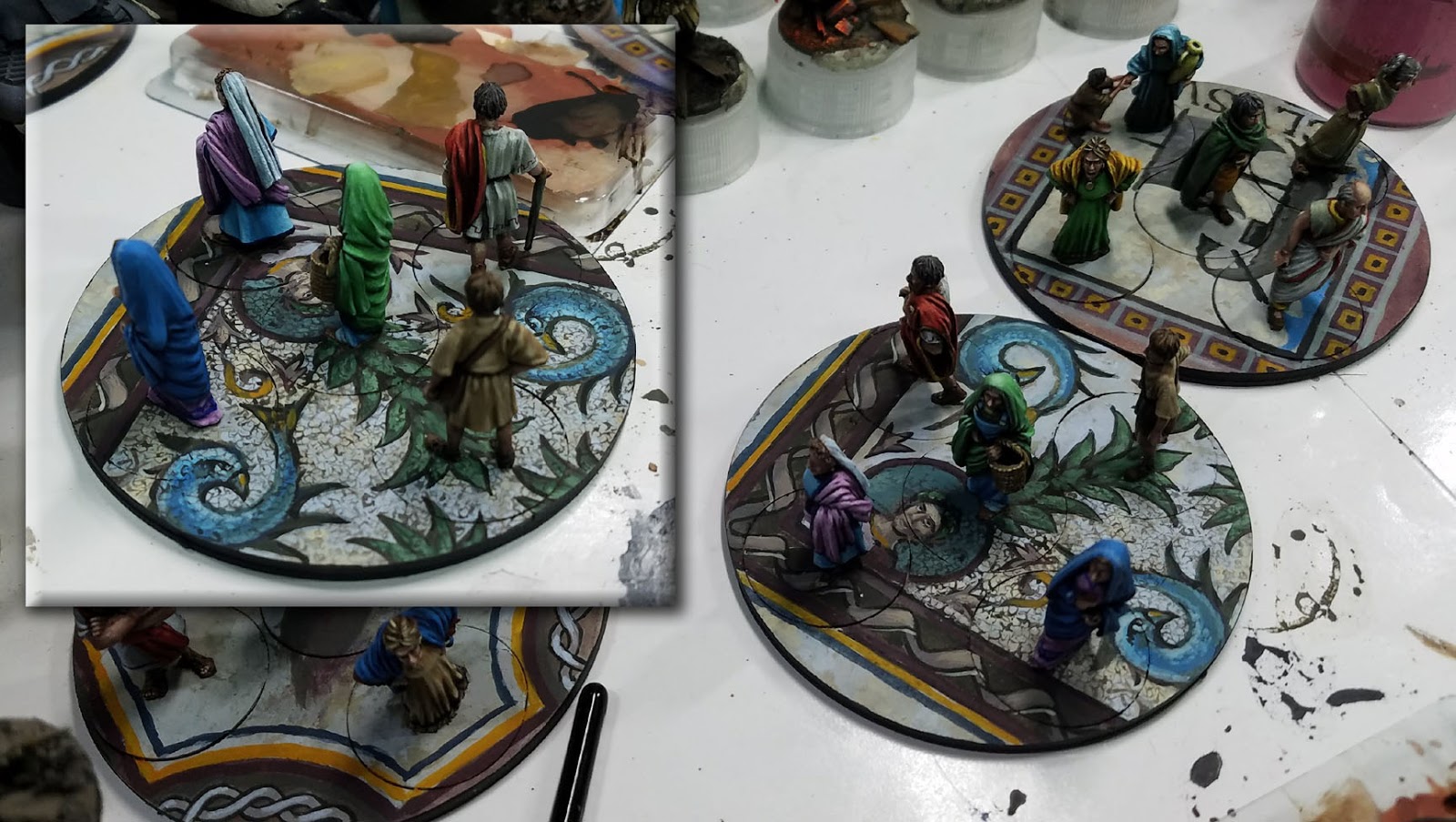 On some parts of the pattern, I had to make sure that I "followed" the texture of the design, in particular the more angular or patterned sections like those around the outer edges.  Straight lines in particular are very important, as you will see in each one. 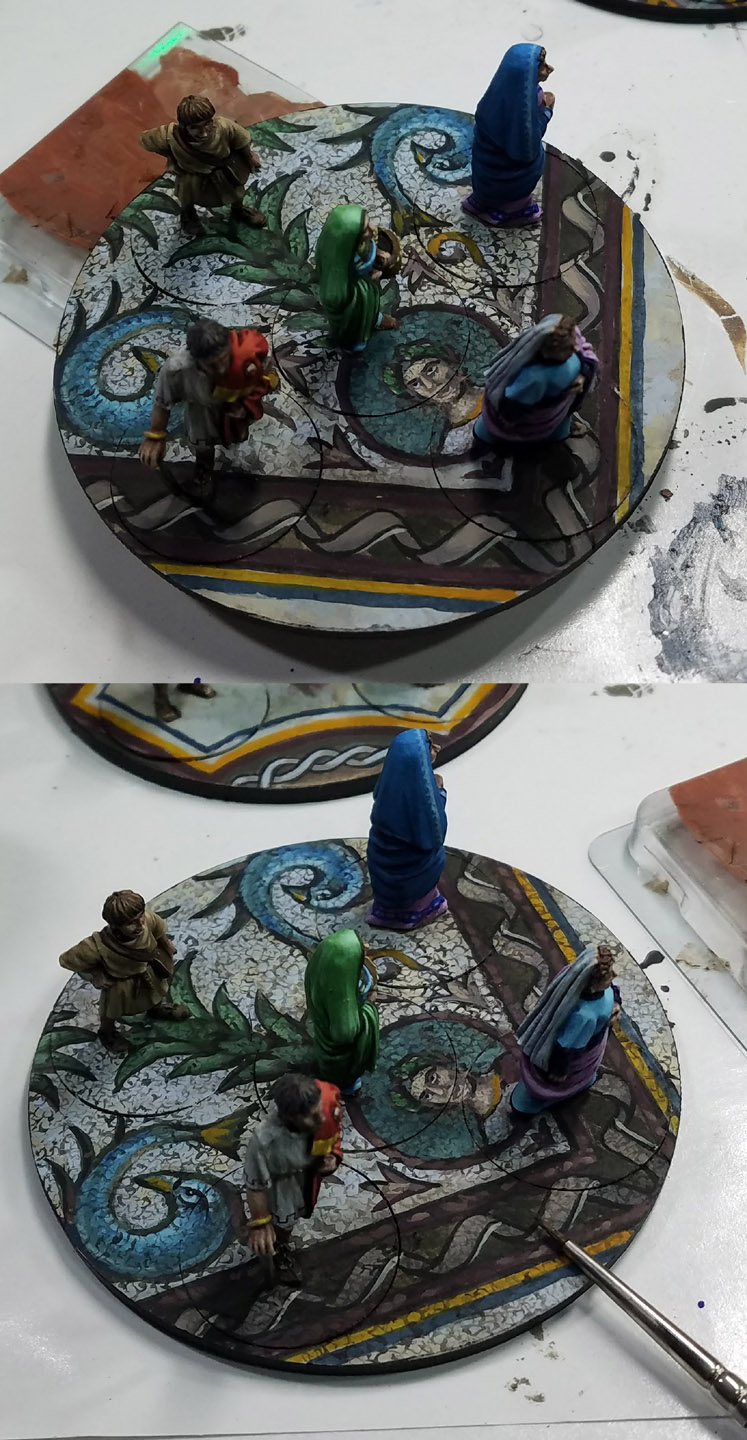 After the lining was done, I went back in with slightly lighter versions of each color that was done in a particular section and "picked out" random tiles.  When the mosaics are created, tiles are not placed evenly.  Some are placed at slightly different angles so that the catch more sunlight and sparkle a bit! 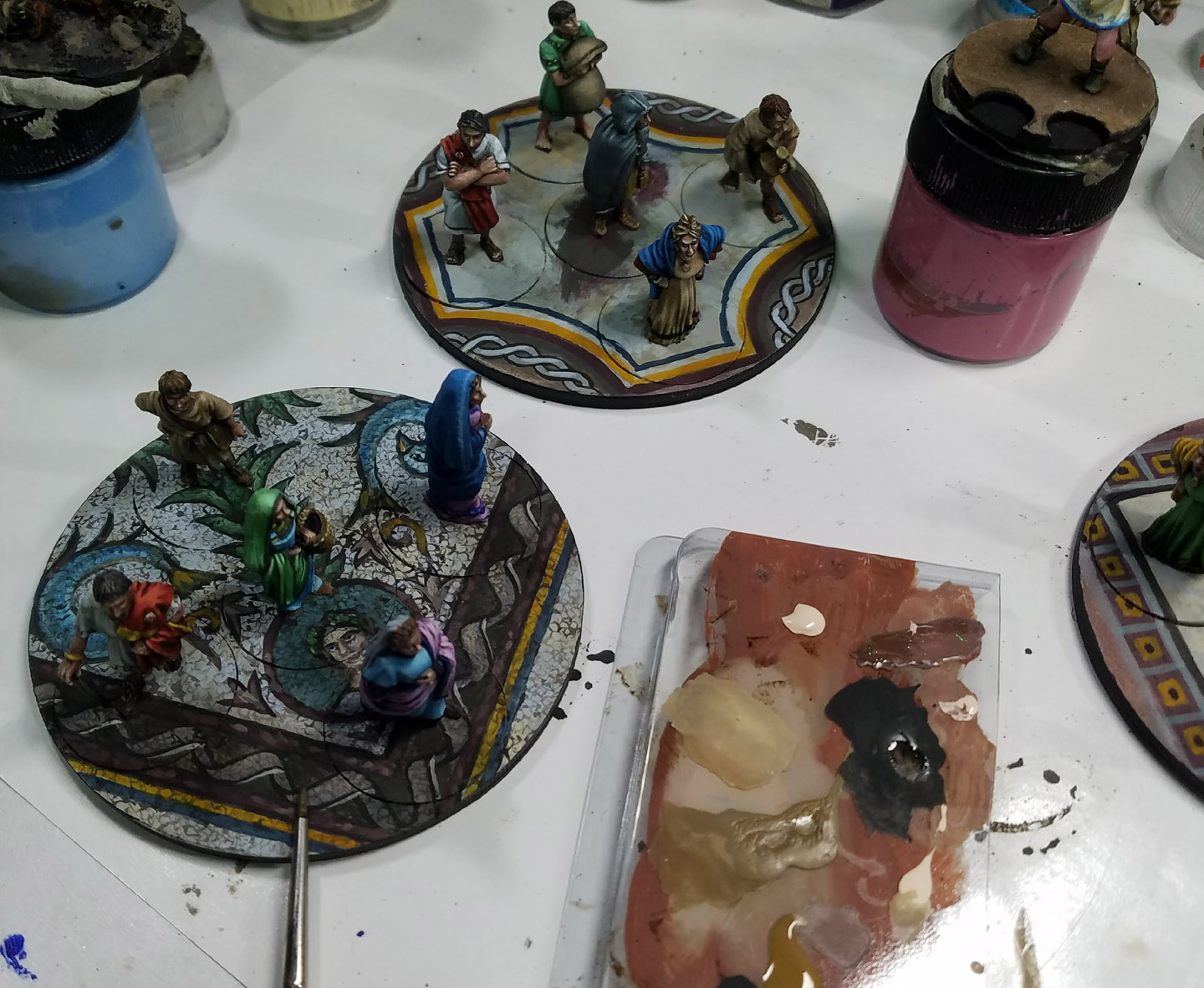 This had to be done to every single base, and this version had a lot more 'pattern' to follow.  That is, lining up those tiles one by one following my initial design.

I had to work my way across the more open surface, which will be accented by a few different colors which are very bright.

Eventually I worked my way around the ship and the wave design, trying to follow the curves of each one. 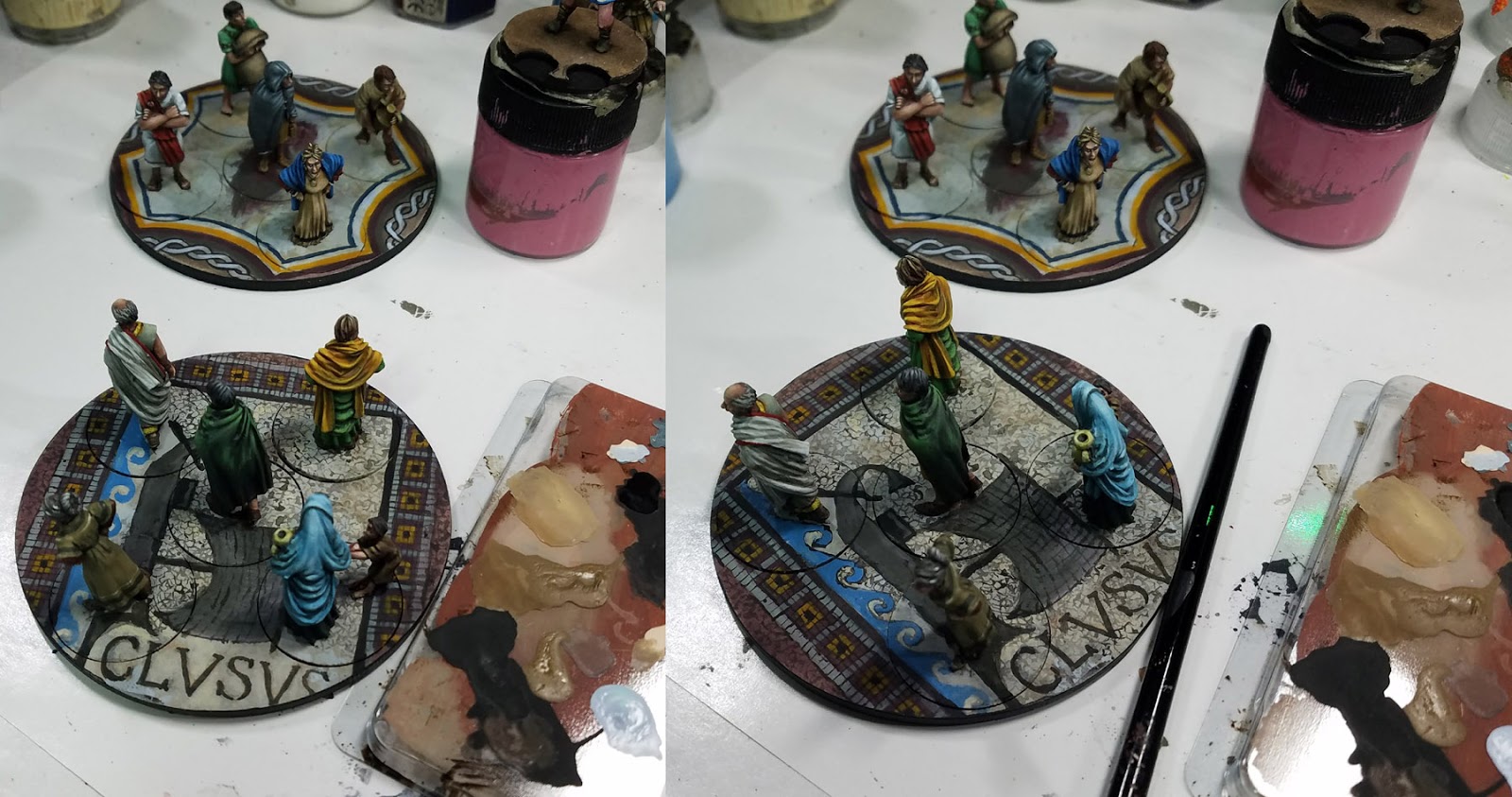 As you see in this image, picking out the lighter tiles on the more intense patterns is quite dramatic, and makes what might otherwise be a boring area of color have some extra interest. 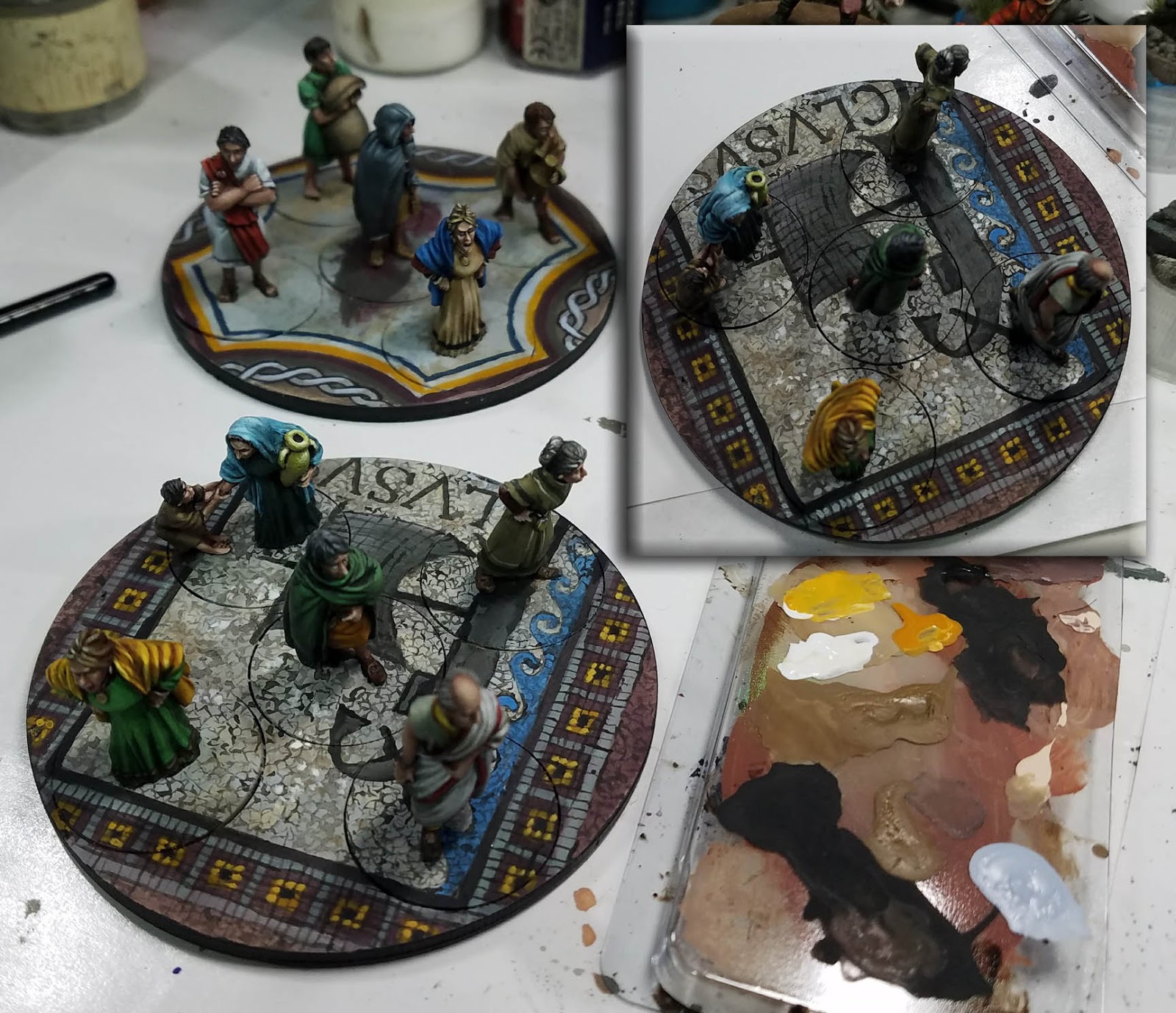 I think this view really demonstrates that principle.  This tends to show up more on the geometric patterns as opposed to more organic portraits. 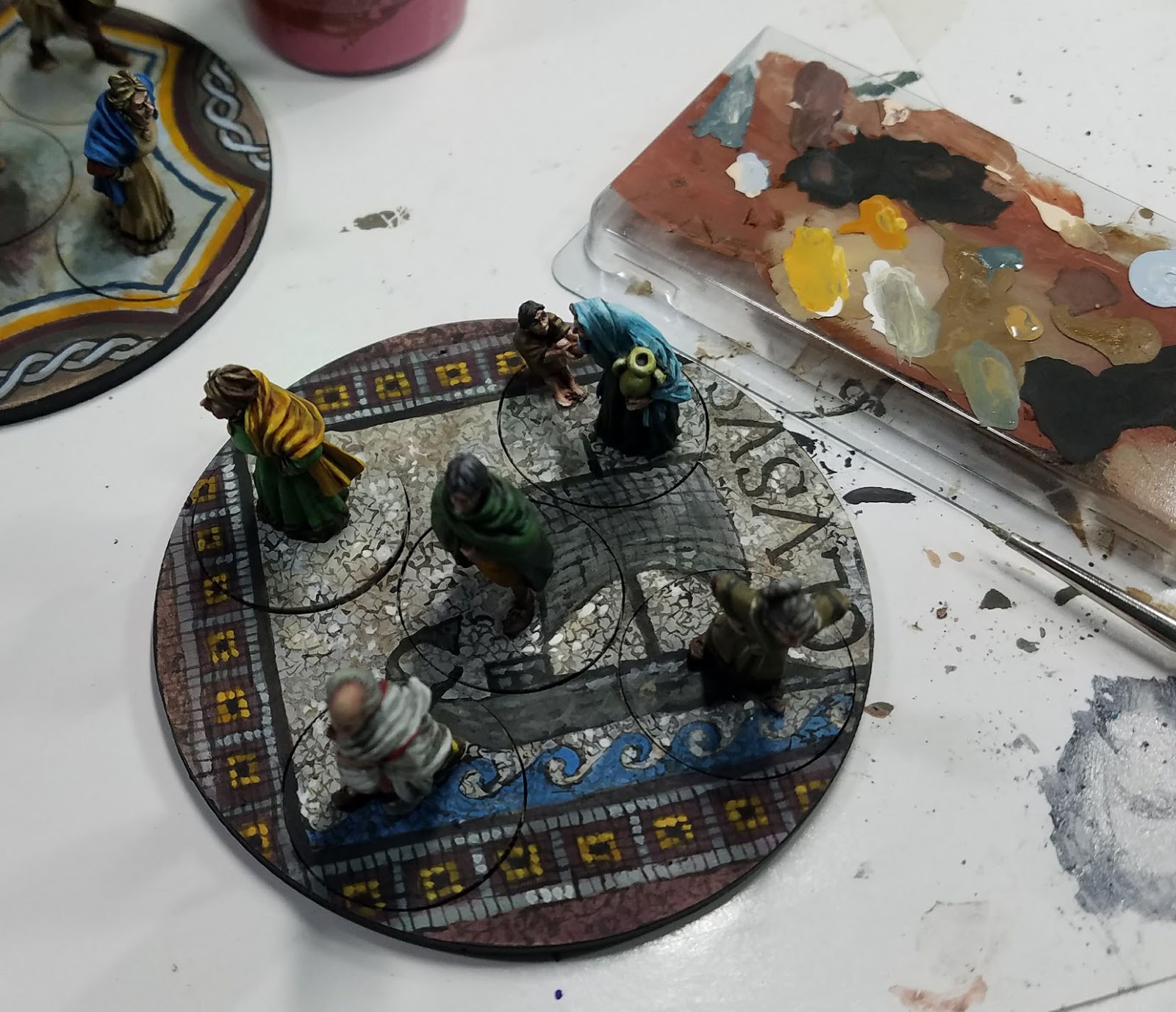 This pattern was very challenging, as I had to "square off" circular shapes, with 4 parallel stripes no less of different colors.  As with the other complex pattern, adding a few "highlight pieces" really helped to make it take shape.

You don't want to get too crazy with that, as it might start to detract from your miniatures.  I will also be putting a dusting of weathering powders on these to tone that down. 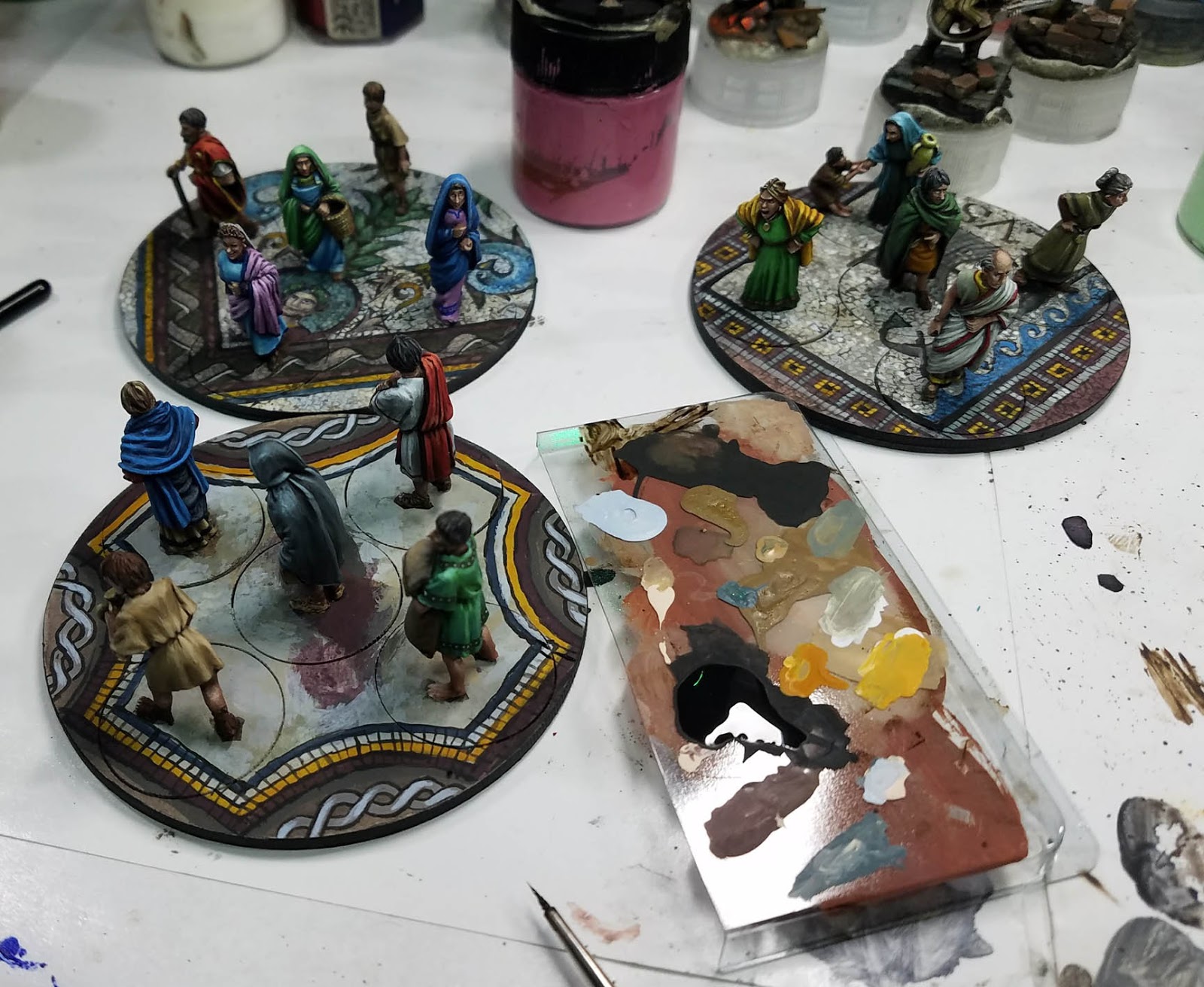 Here's a link to the filming of the original basing video that I made as part of the Painting Pyramid series.  It was one of 12 different basing techniques that I filmed! 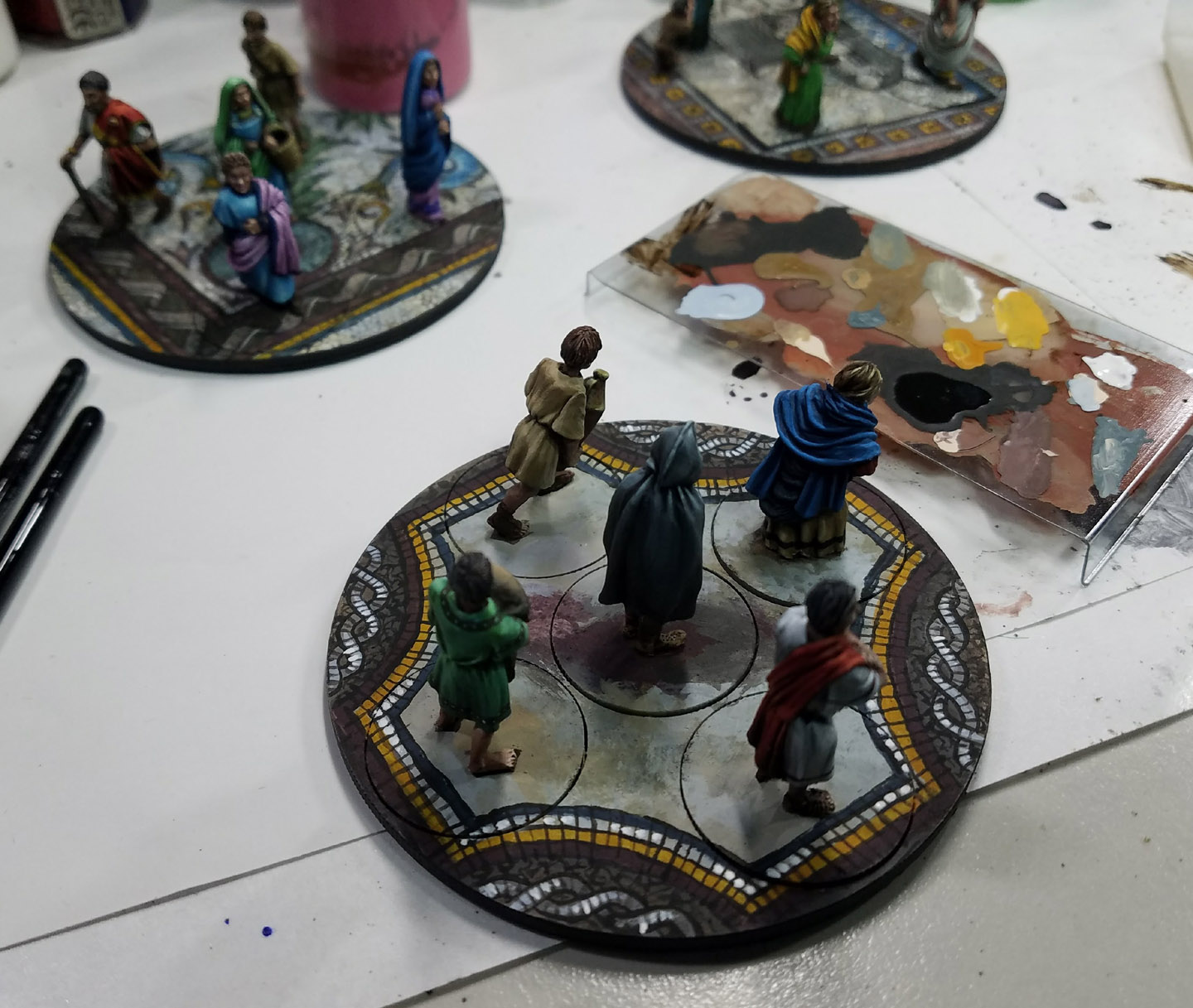 I have already sent the link to the YouTube instructional video that I created for the Painting Pyramid series to the patrons who subscribe $5 or more to the patreon page.  I have much more under way at the moment, and I want to have that ready for the patrons to see as well! 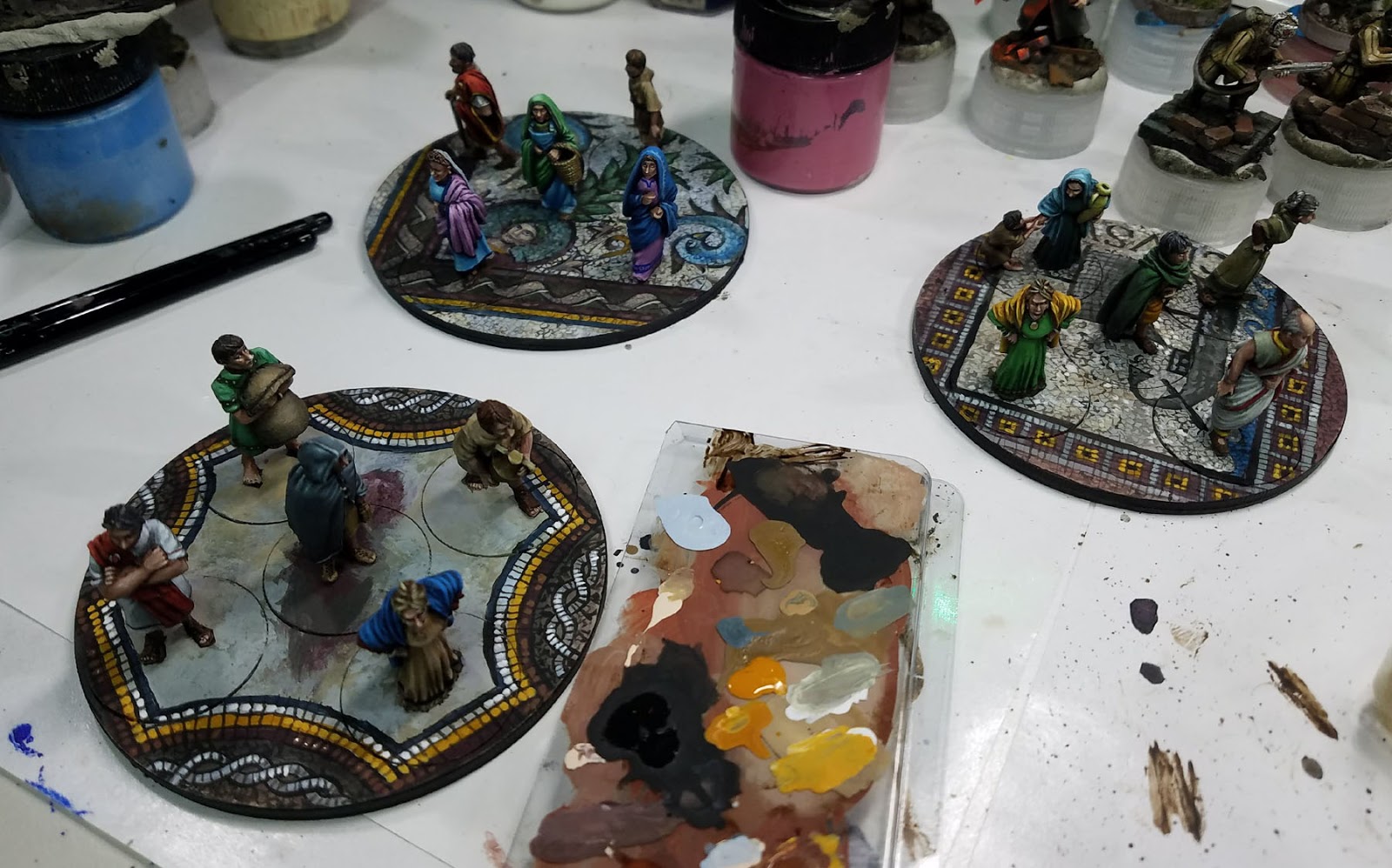