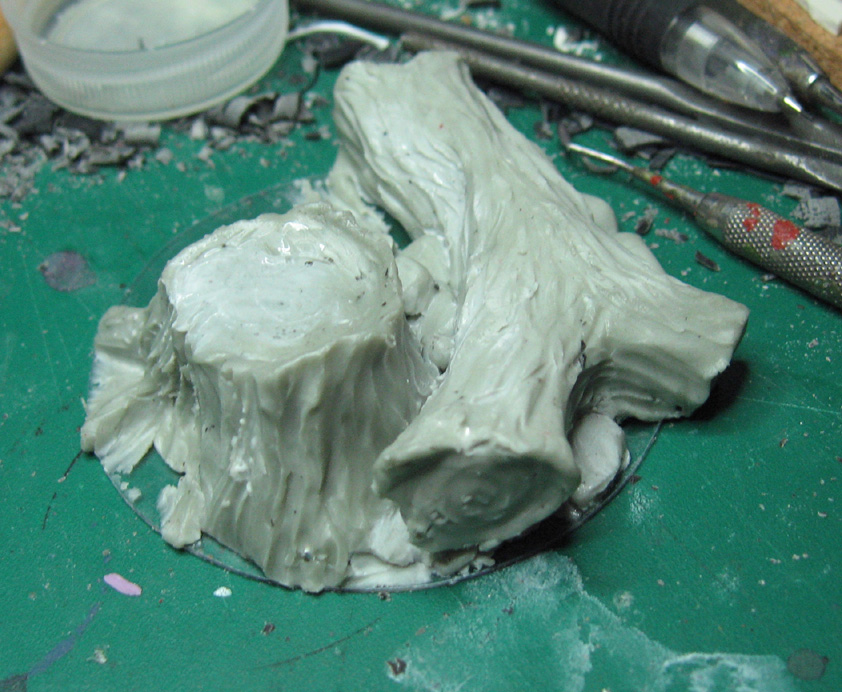 I apologize for the lack of early stage images here.  Everything I was doing with the Apoxy sculpt was not only very time sensitive, my hands were also covered in Apoxy sculpt slime!  I probably would have dropped the camera 2 or 3 times. 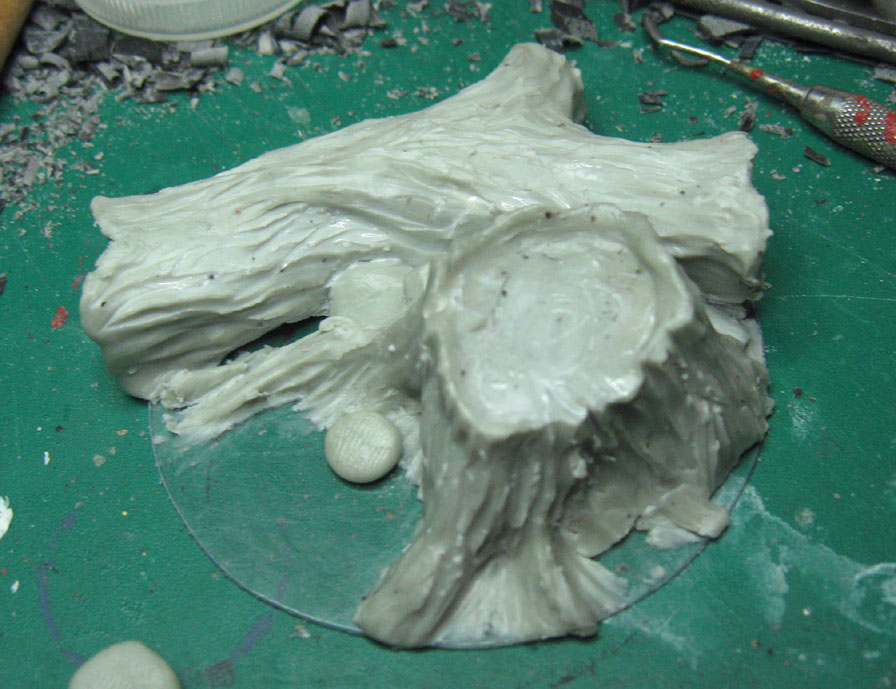 This is the Groundwerks base set from CMON which I am adding onto with an 80 mm insert: 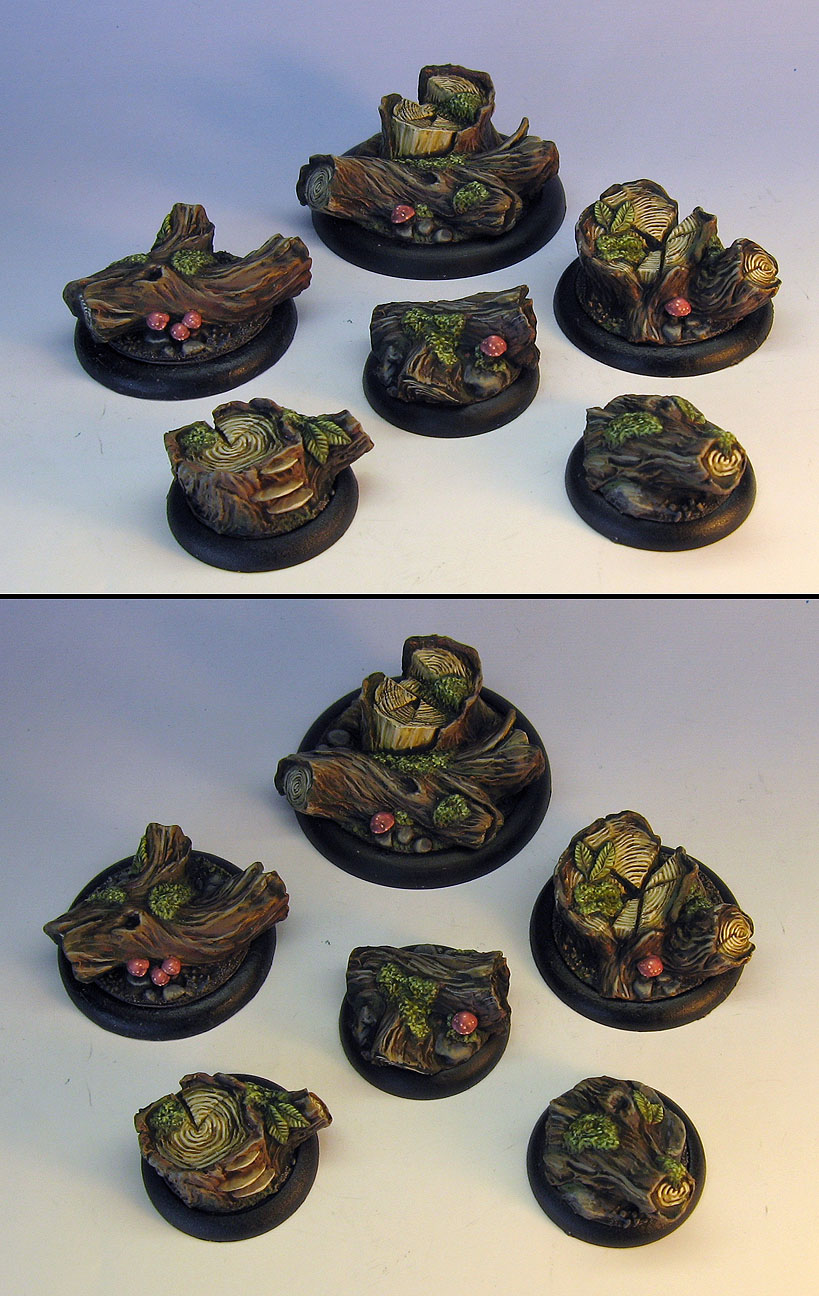 This is yet another training project for a future 'how to' DVD.  This is one of my favorite designs.  Just like the rock bases from the last few posts, I blocked out the main shapes with tin foil.  As with the other sets, it save a lot of time and clay.

Once you get adept at working the tin foil, you can almost "pre sculpt" the base with the foil.

After establishing the logs and stump, I had to fill in the recesses with some large rocks to make it easier to cast.  It also stabilizes the logs, and gives me a platform for the green stuff extras. 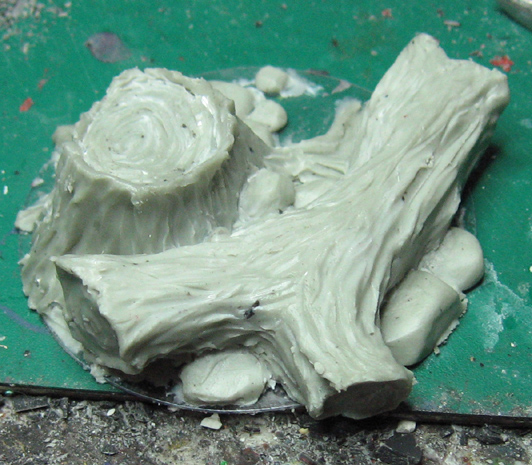 A nice little set of rocks in my open area for composition... 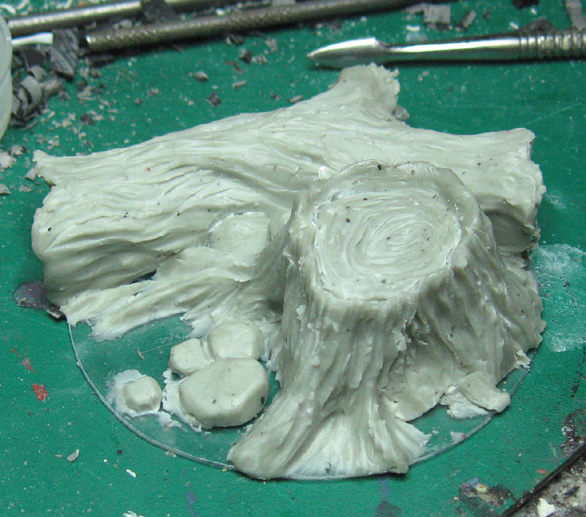 All of the rocks are now in place, and the Apoxy sculpt is fully hardened, so it is time to start working with the green stuff. 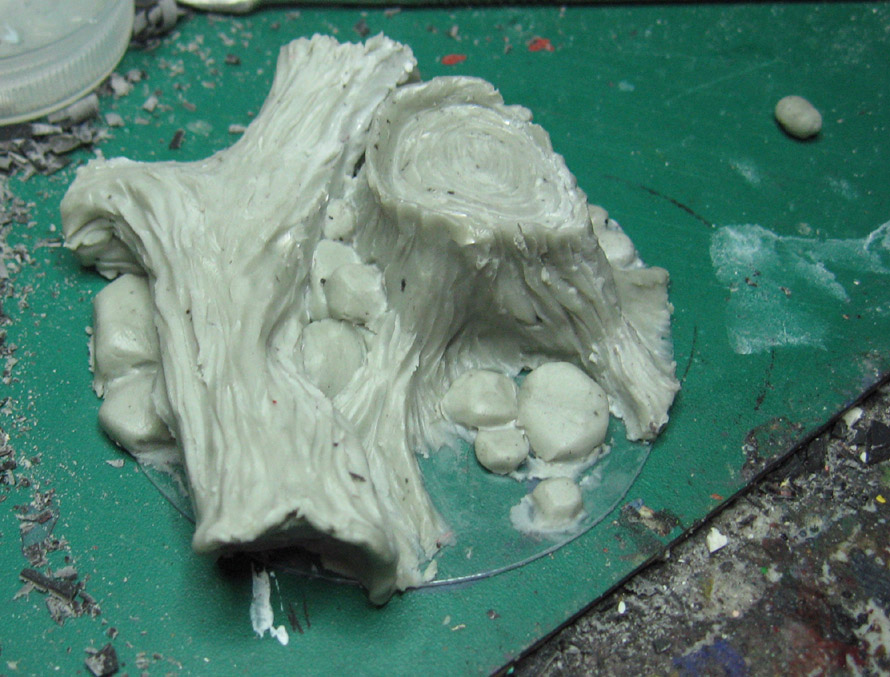 I have another post showing all the green stuff work that was done.  Lots of mossy/grass texture coming up!! 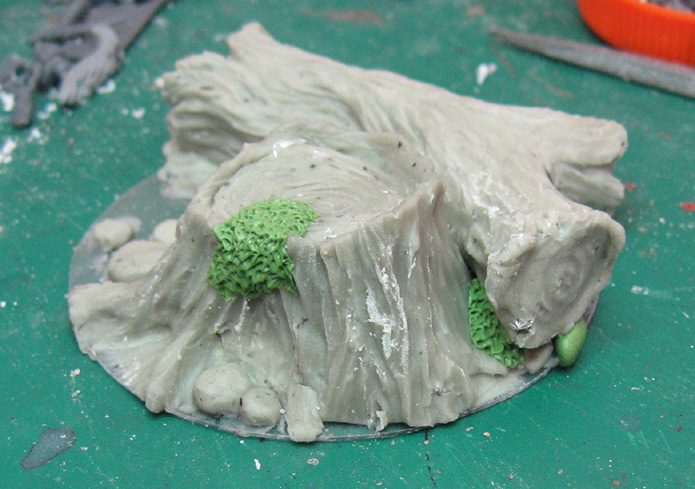 Posted by wappellious at 7:51 PM 8 comments:

A converted Klaivex for the Archon 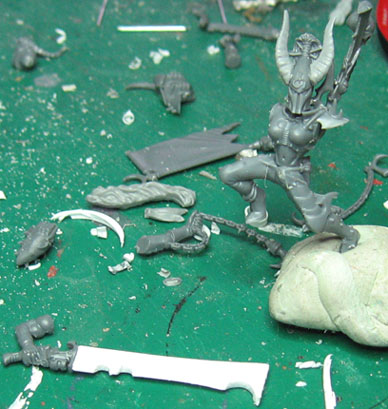 Interspersed with all the work on the bases and other stuff, I did a little bit here and there on the last piece of the Adepticon Incubus squad... the Klaivex.

Inspired by the pose of Lilith Hesperax, I found a leg and torso set from a Venom.  This was pretty similar to that pose.  I was also fortunate enough to discover a small sprue of beastman horns!  Very handy.

The rest  of the bits were various Wyche and Kabal warrior parts.

As I did with the other Incubi, I made plasticard a klaive. 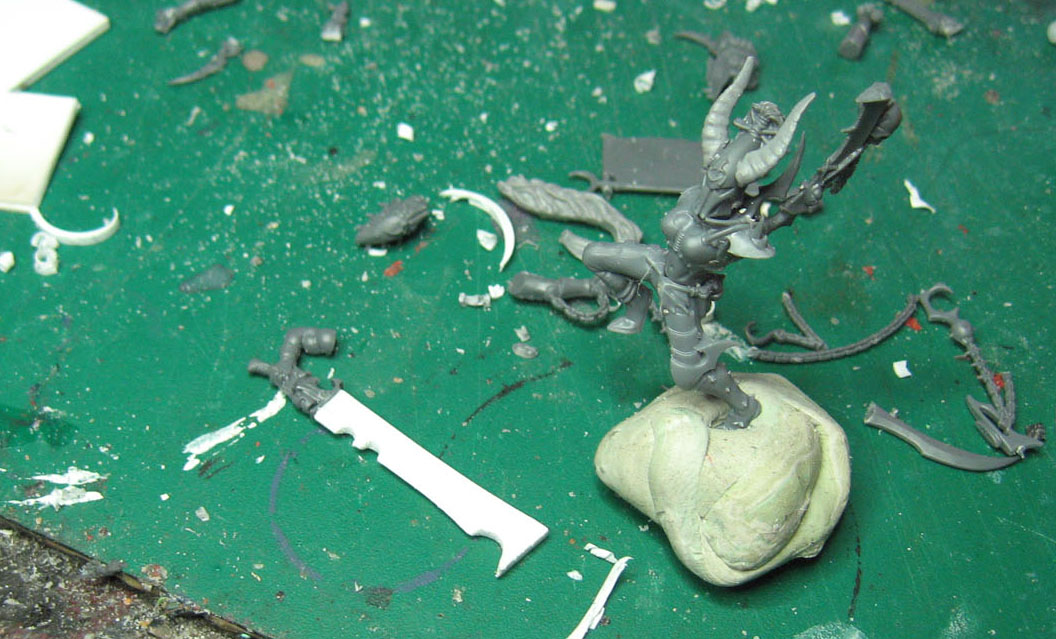 Here is some early assembly, focusing on getting the arms to hold up the two handed weapon.  This is the most difficult part, as none of the arms from any of the sets really work well for this purpose.

After I made a back banner/trophy pole of plasticard, it was time to make a base.  I wanted to have her standing on a tilted piece of terrain, in this cas a buttress from a 40k terrain kit.

Here are a few images of the assembled figure with a bit of green stuff, such as the right shoulder pad.

And now for the whole squad! 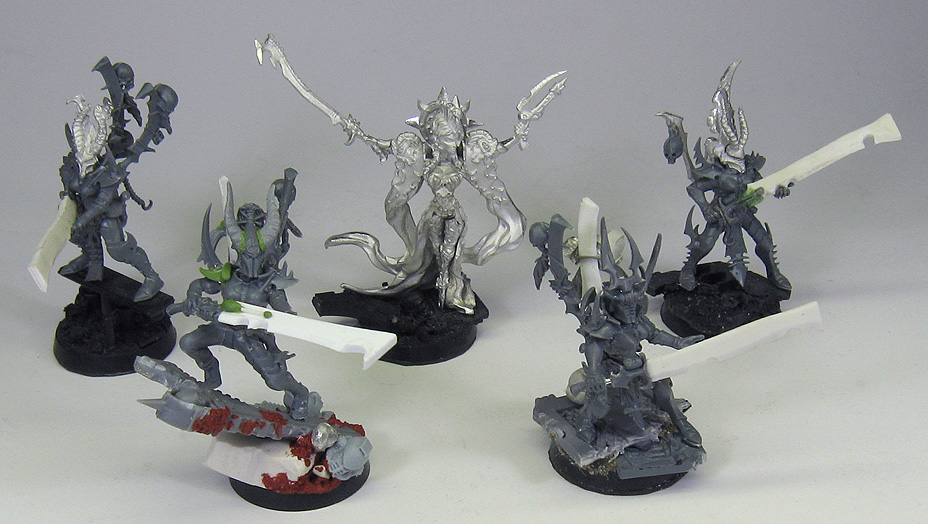 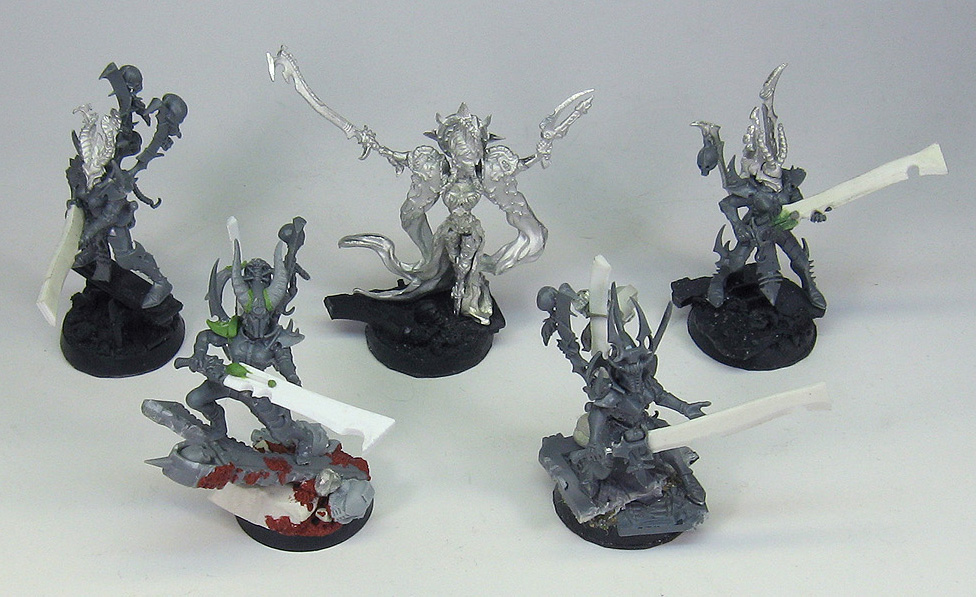 Posted by wappellious at 1:09 PM 4 comments: 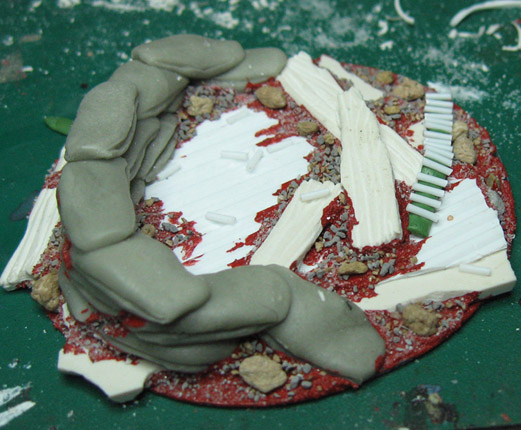 Another day, another base insert.  I needed to match the previous set of sandbags.  After finding the plasticard, I broke up some sculpey pieces and started glueing. 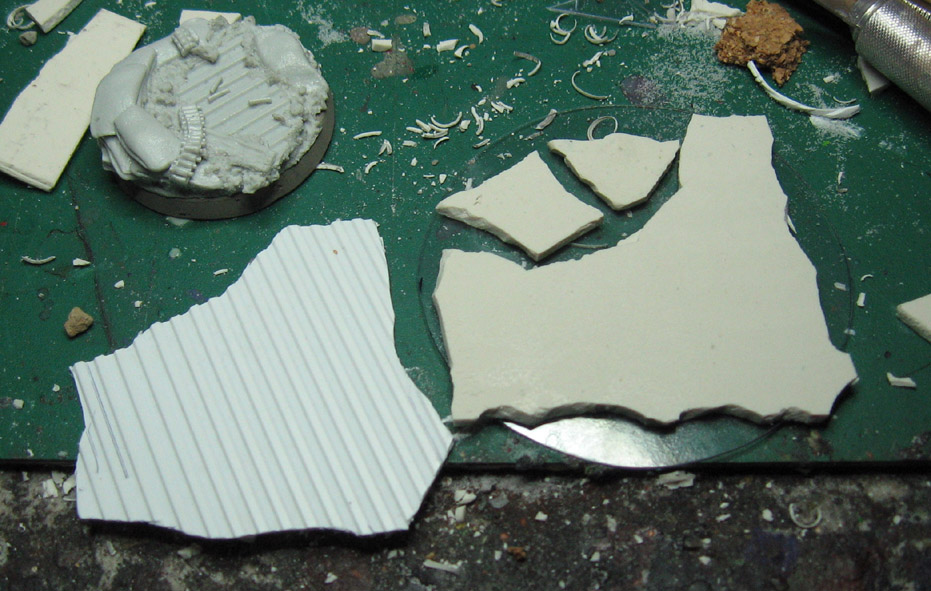 After attaching my plasticard, I carved a few wood planks from smaller baked sculpey pieces. 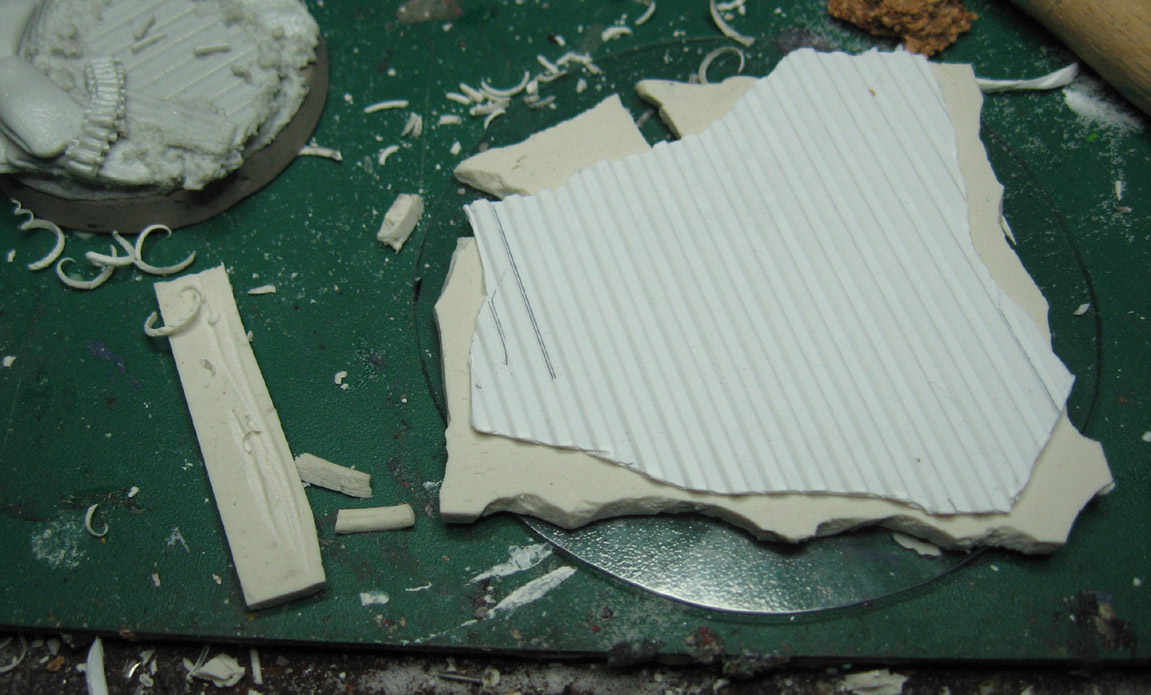 I tried to position the boards in an interesting way, but still allow for a big miniature to stand on it. 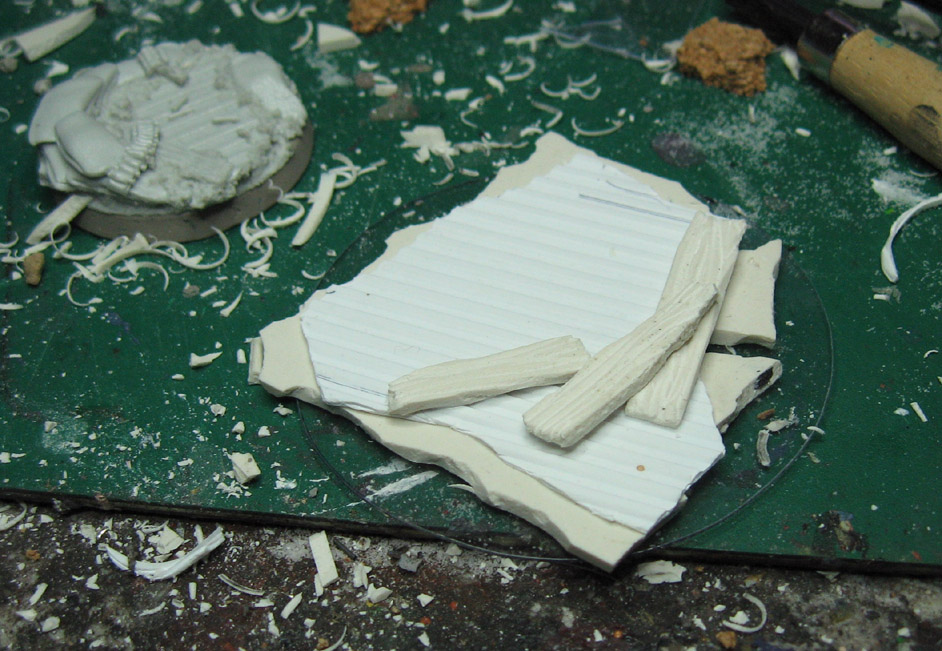 All the boards are now in place... 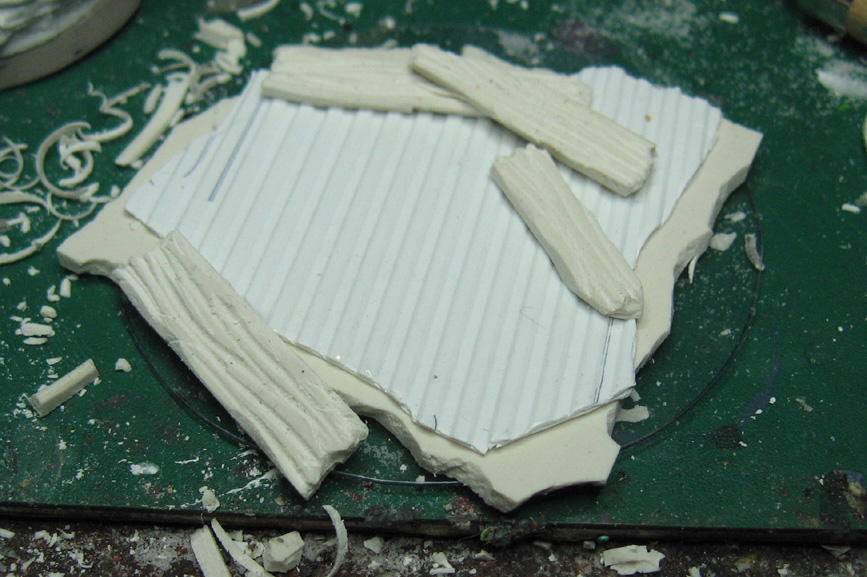 I grab the Apoxy sculpt, and sculpt some sandbags!! 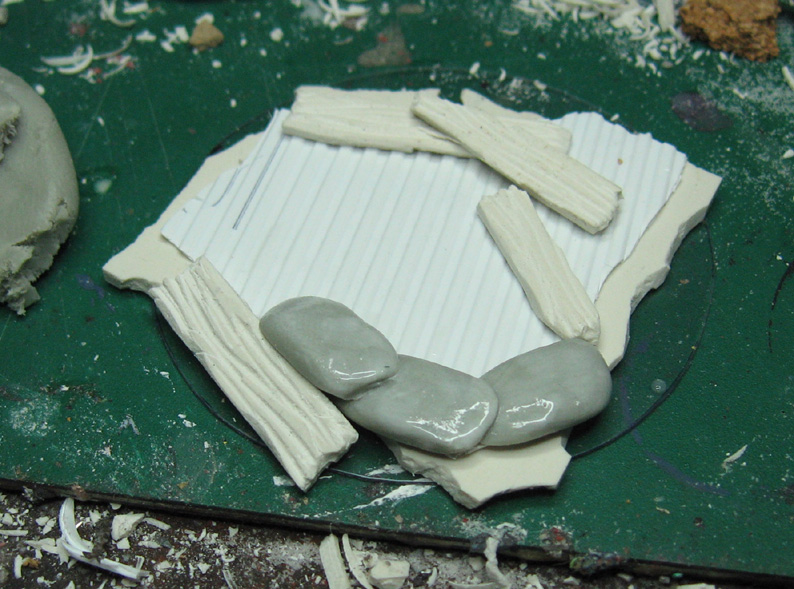 First row in position.  After they set up for a bit, I used my tool to create a seam for each bag. 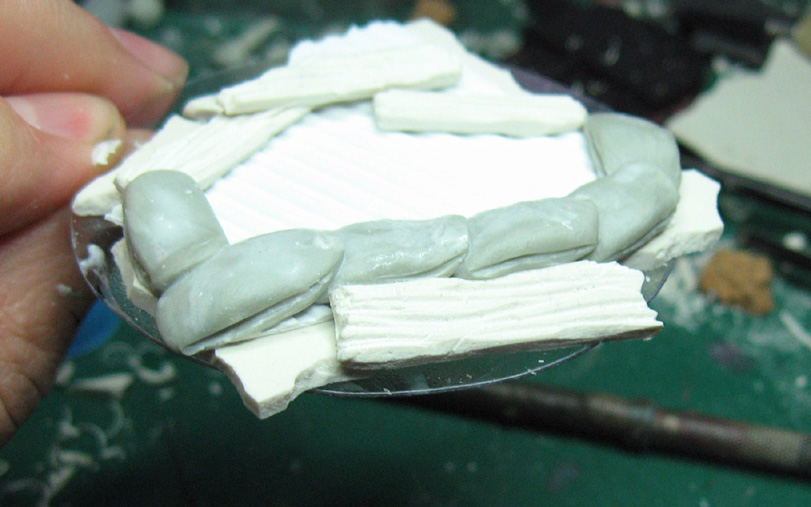 Additional rows are added, laying them out in a very similar way to placing bricks.  It is important to vary the placement, making the bags look like they are 'flexible', and not super rigid. 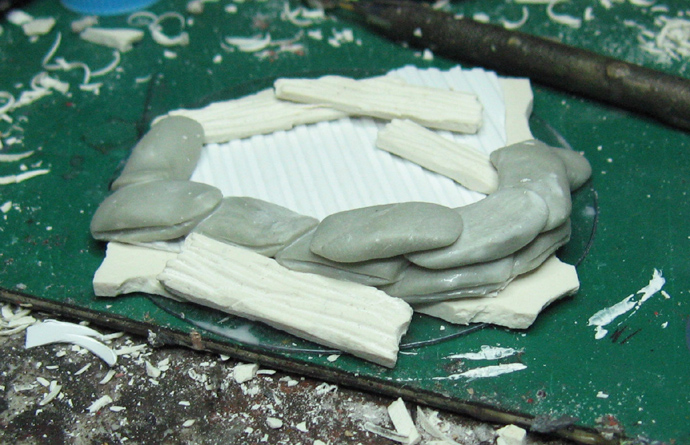 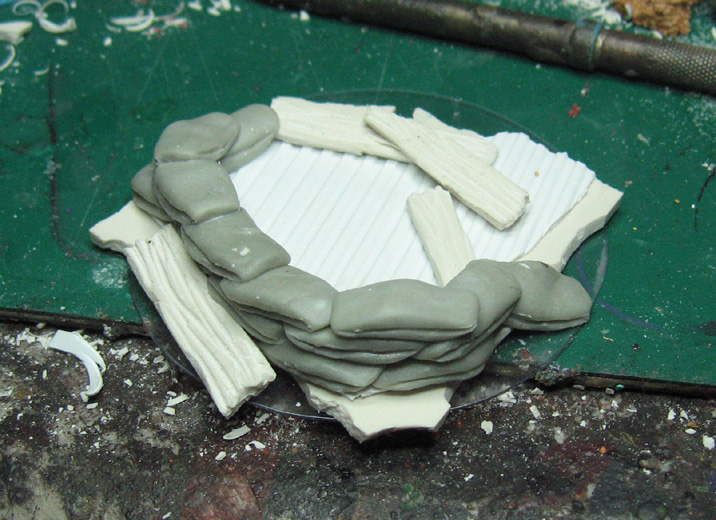 This time, I put some bullet holes in the bags. 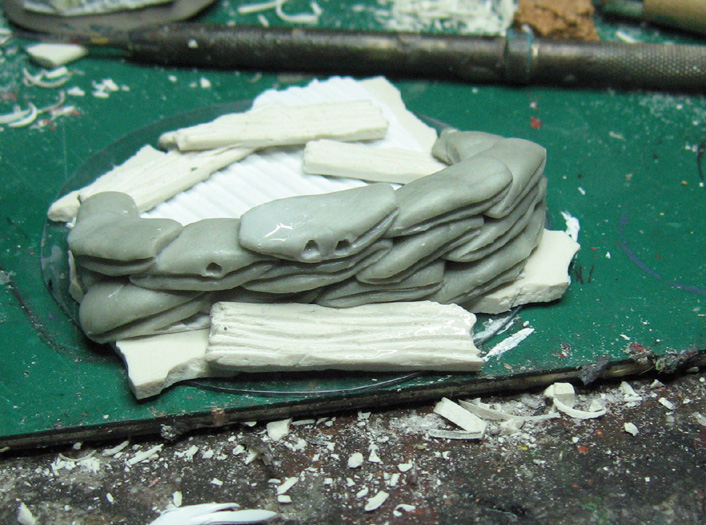 I tried to fill in all the potential gaps with Apoxy sculpt, so that it would be easier to make the casts. 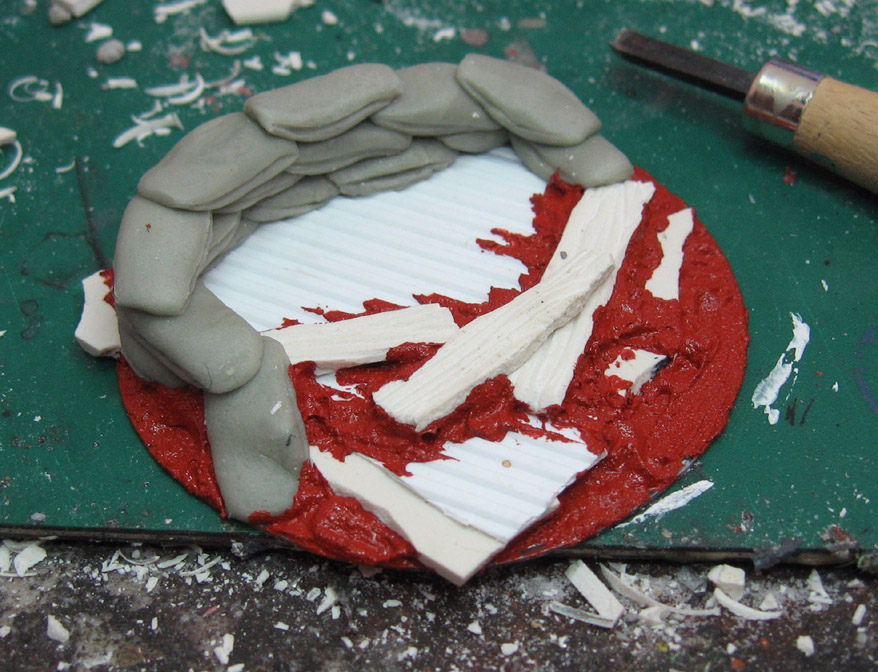 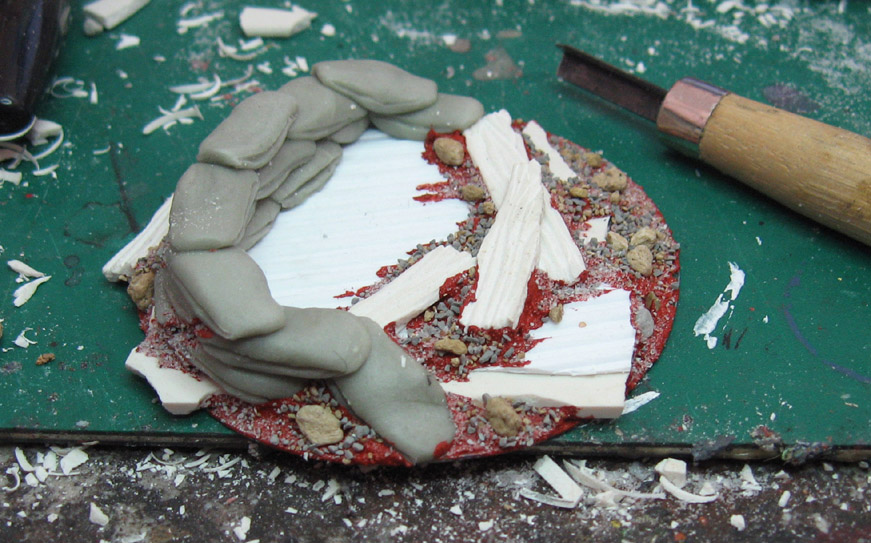 Now for some sand spilling out of the holes! 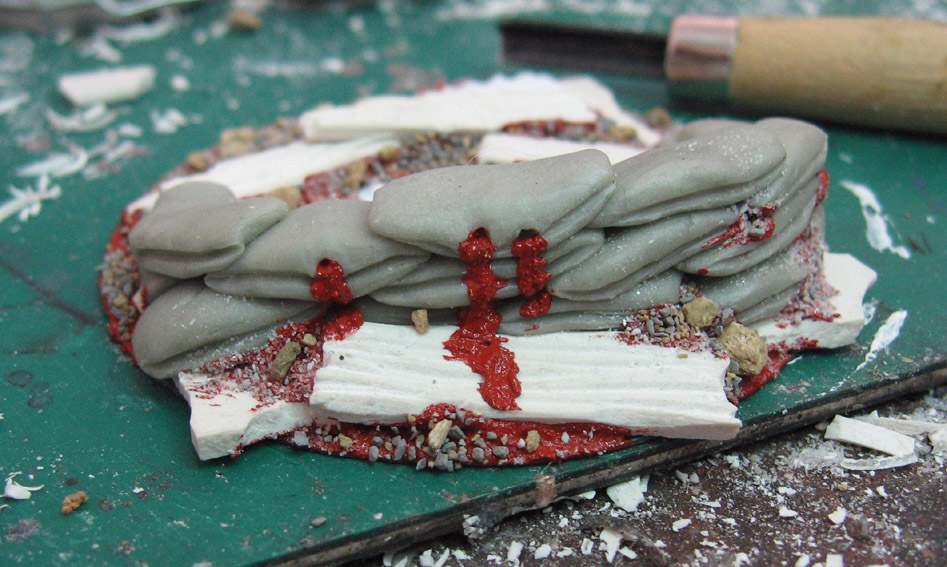 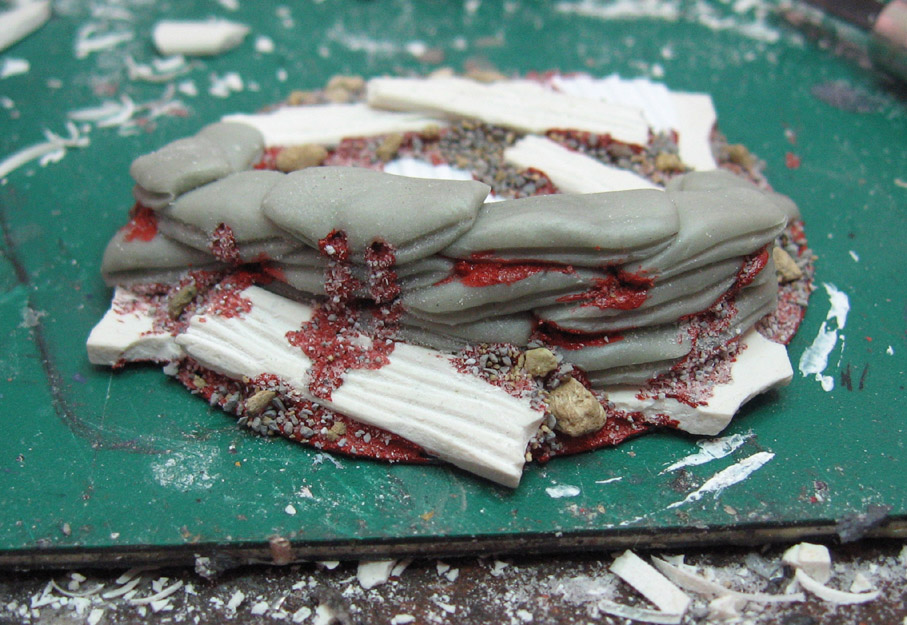 One more major detail.  I cut some polystryene tubing to match the shell casings on the floor of the trench.  They are placed on the feeder strip. 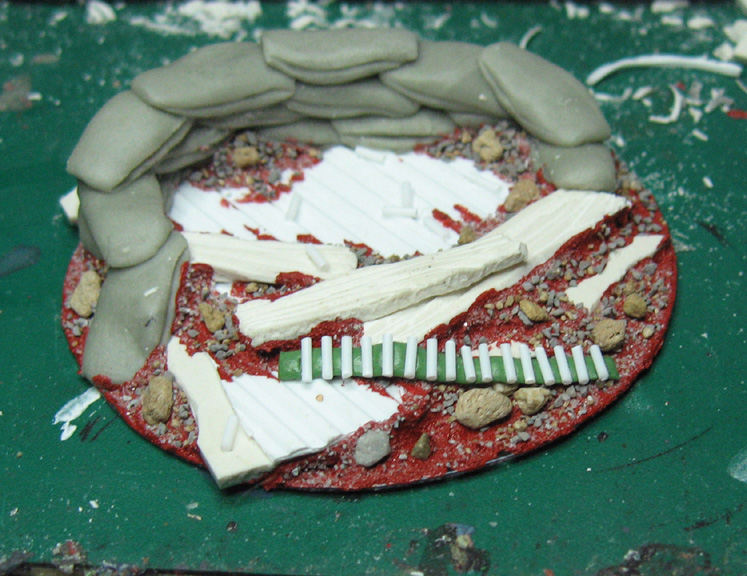 I may still add some larger shells, like mortar rounds, but all I have left to do it put some more green stuff on the ammo strip, and that's it! 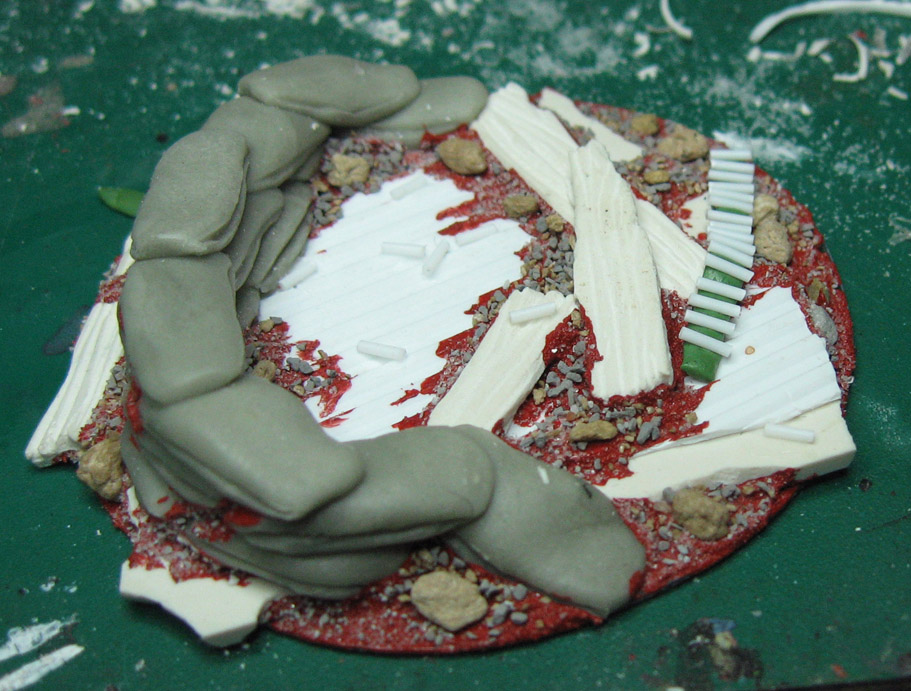 Posted by wappellious at 3:45 AM 6 comments: