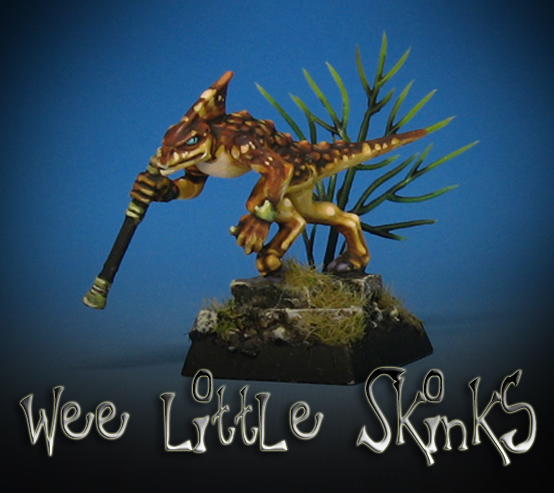 I cannot count the number of Skinks that I painted for my Lizardman army, but I do know that the vast majority were of the hand weapon and shield variety.  Only about 24 of them were the blowpipe skirmishers.

I had no Saurus in the army, and just a small unit of Temple Guard every so often when Mage Priest Babo was on the scene.  The concept of the army was centered around "Temple Restoration Crews", comprised mostly of skinks.

Skinks on terradons scouted from above, while skirmishing skinks guarded the outer defenses on the ground.  Other Skinks prodded huge Salamanders about, as others directed Kroxigors to move heavy stones from shattered temples and move the repaired stones in their place.

The largest stones would be moved by the Stegadons, which also doubled as Engines of the Gods with, you guessed it, a Skink Priest on top!

There is an entire story written about this army, called the Legend of Sticky Wikkit... the greatest of all the Skink Chiefs.  Here's a link:

Posted by wappellious at 11:04 AM No comments: