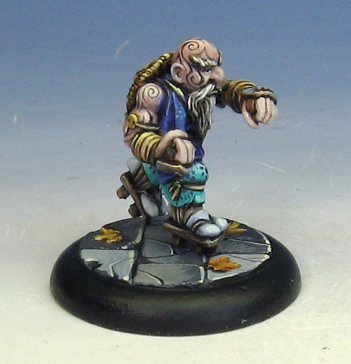 Once again, we return to Stonehaven to see another addition.  This time, it's Orm Surefist!

Orm prefers seclusion.  For him to take up the road, something truly critical must be on the line.  Orm spends most of his free time training.  He does not value social interaction, but he attempts to be kind when forced into a conversation.

I had lots of fun doing the freehand!  The base is from DragonForge Designs, and it has those Woodland Scenics painted leaves for some extra color!

Be sure to check out their very cool gnome kickstarter!!!! 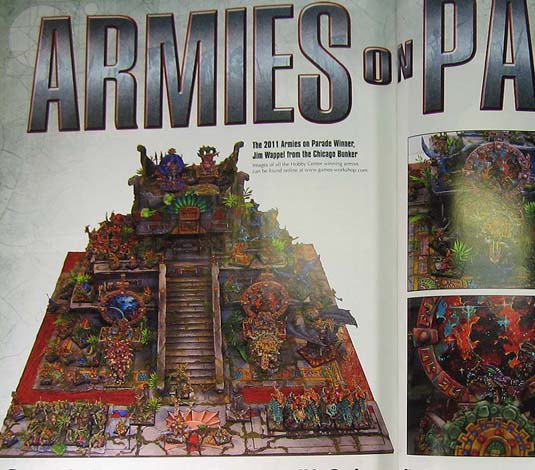 One year ago today this little blog was launched.  I had no idea what it would become!

Many thanks to everyone who has followed this blog, and listened to my mad ravings!  It all began with the huge surprise that White Dwarf had done a 2 page spread on my Lizardman army, featuring my army display board.

As I have told many people over the years, that army board was also intended to be a playable terrain piece, with its own rules and so on.

You have also read the story about the Temple of Blood.  This campaign played out that story.  It was four parts, with Rich's chaos vs my Lizards.  This was the farewell to 7th edition.  The previous 3 parts were all setting up this final battle.  There were magic items found, secret maps, and so on.

That lead to this set up for the final battle! 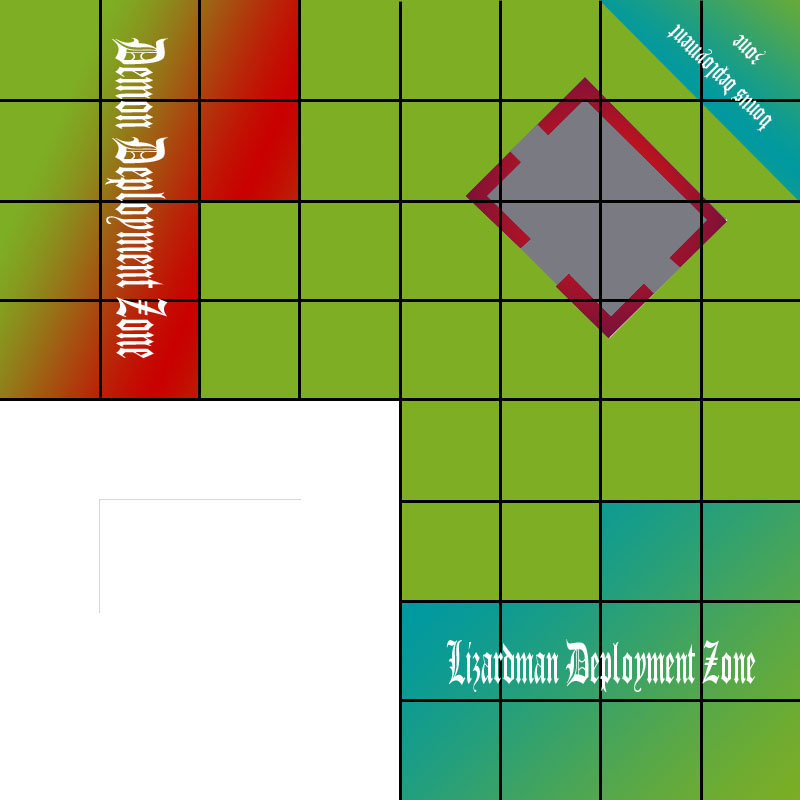 The forces of Chaos, led by the Khorne demon... 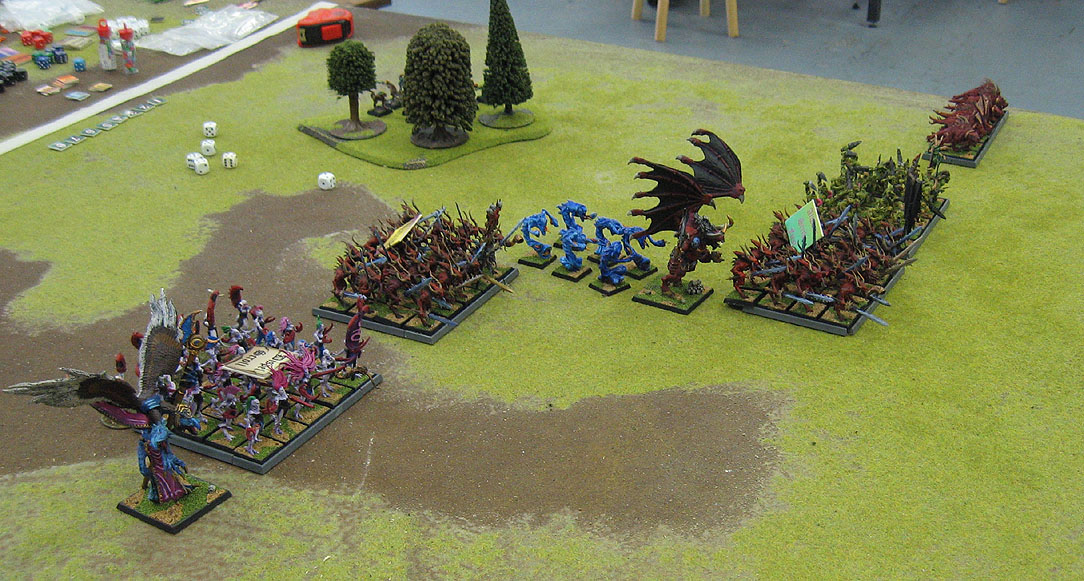 Preparing the advance.  Since neither side would start out with complete control of the Temple, it was a race that had to be won... 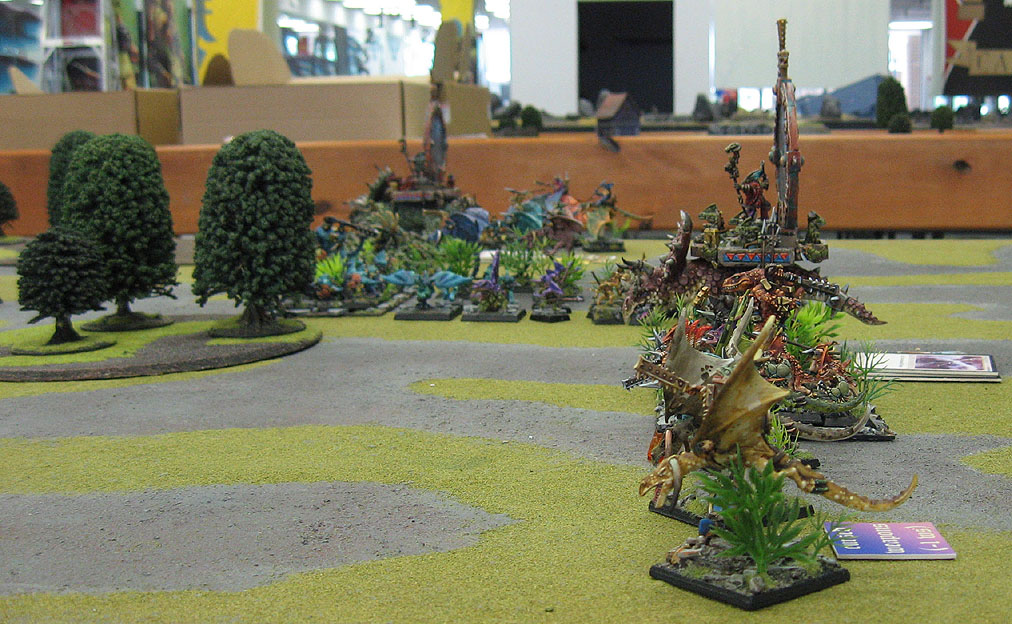 The "Temple restoration crew"  readies itself to fight for its treasured heritage. 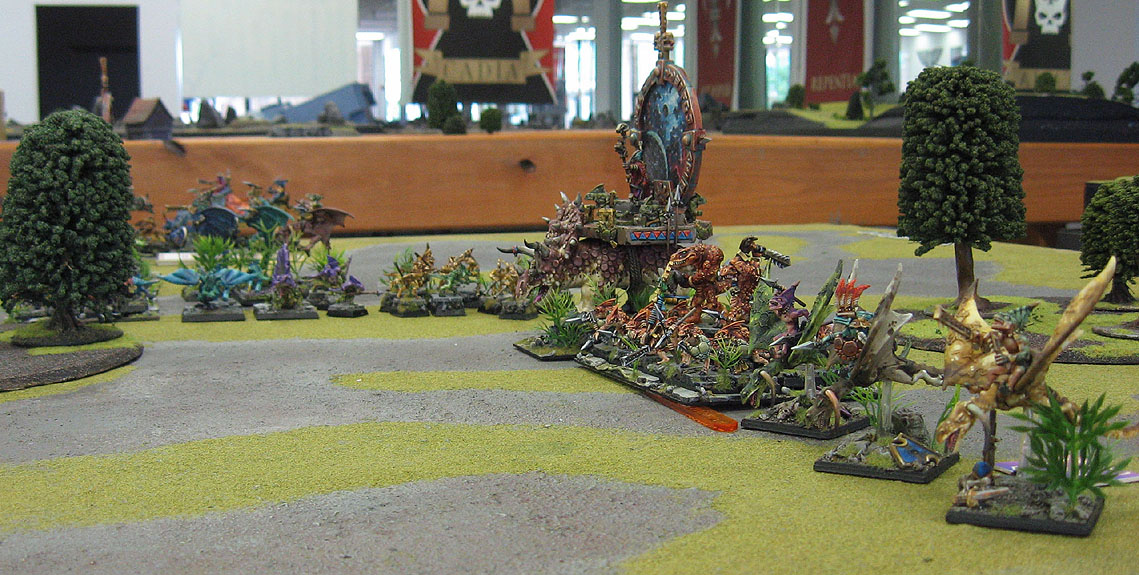 My giant unit of skink and kroxigors (since completed) had to cross the river of blood, as it had started in the secret deployment zone.  Minor detail, anything that stepped into it risked certain death. If any figure rolled a '1', it was killed outright!!! 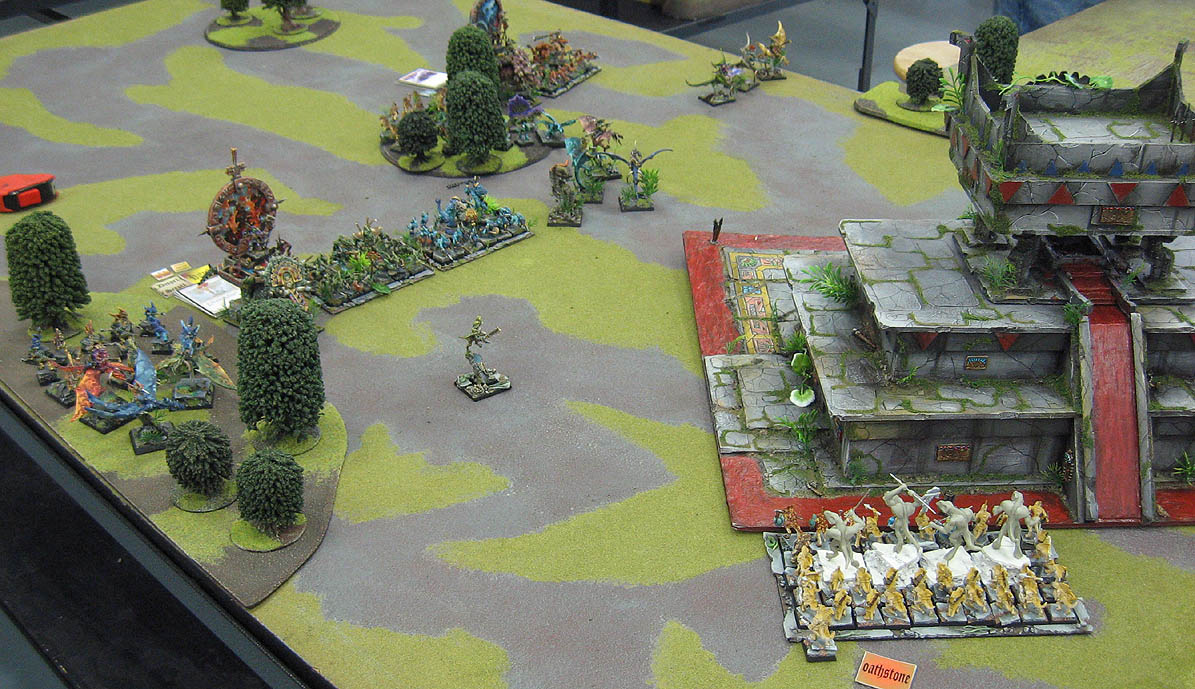 Seeing the huge skink unit attempting to claim the Temple, Chaos also races towards it! 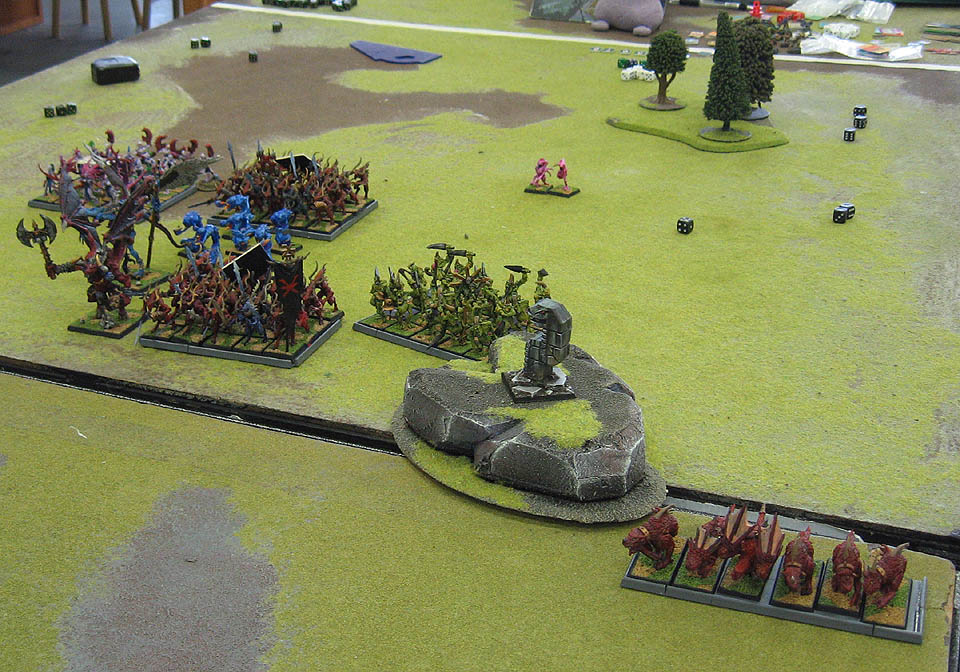 Compelled by their evil, warp spawned overlords, the minions advance.  They are carrying with them some of the magic items they found in the Jungle Hunt... 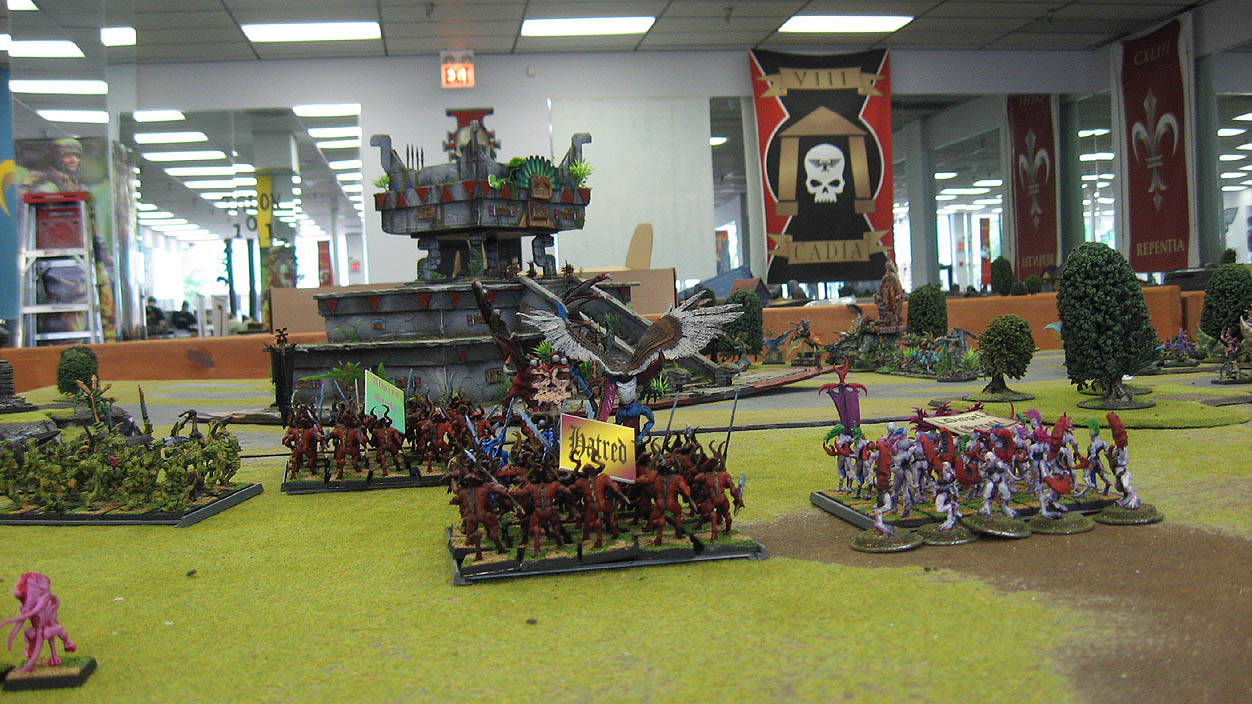 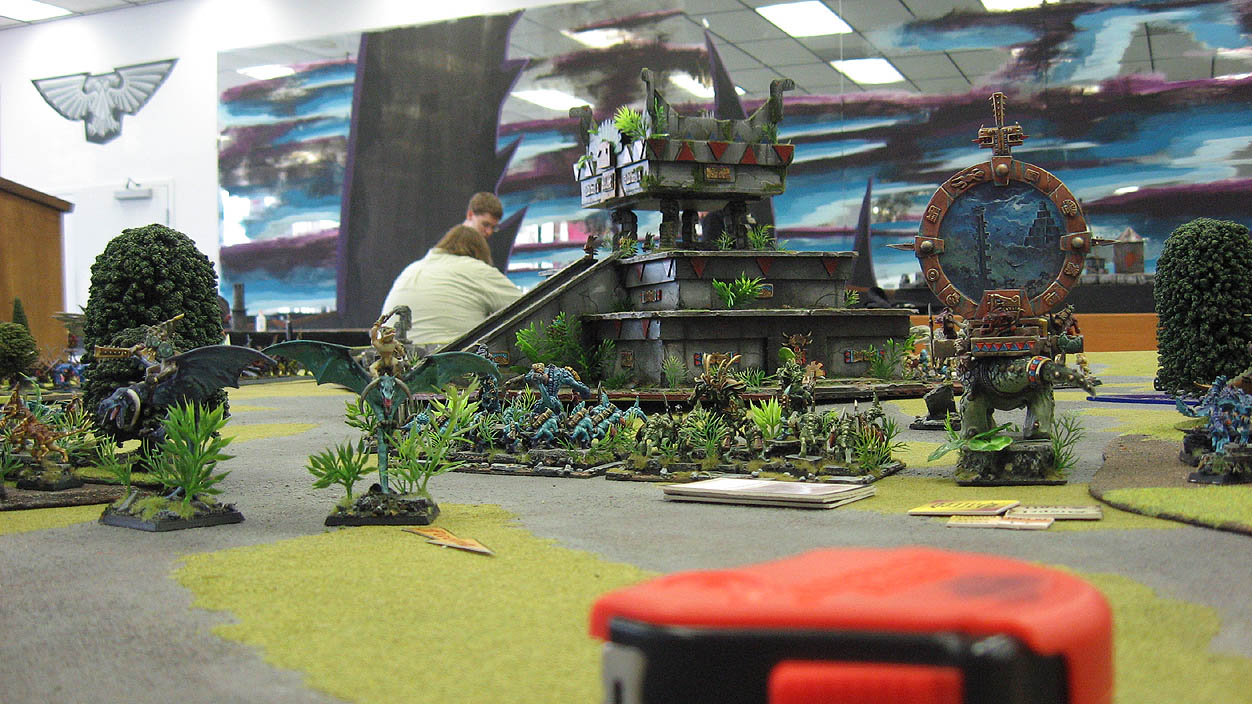 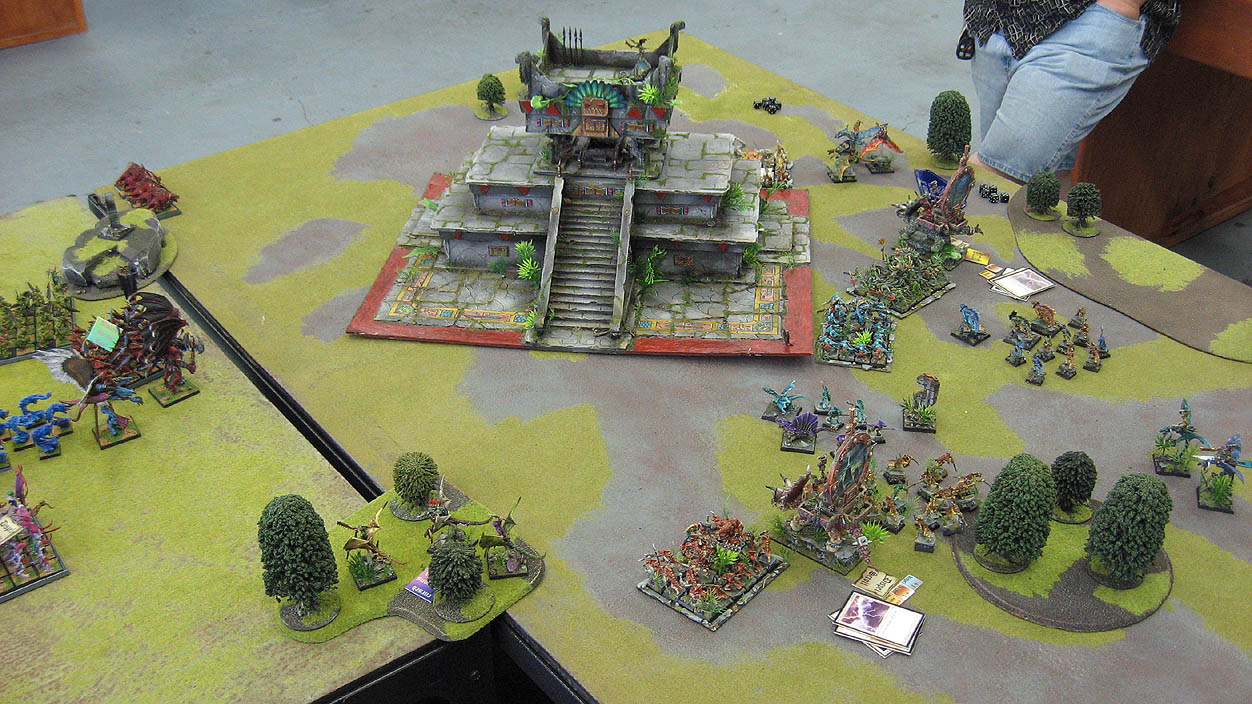 Using the safer causeways, the skink and kroxigor units attempt to get themselves into postion to defend the temple against the inevitable assault. 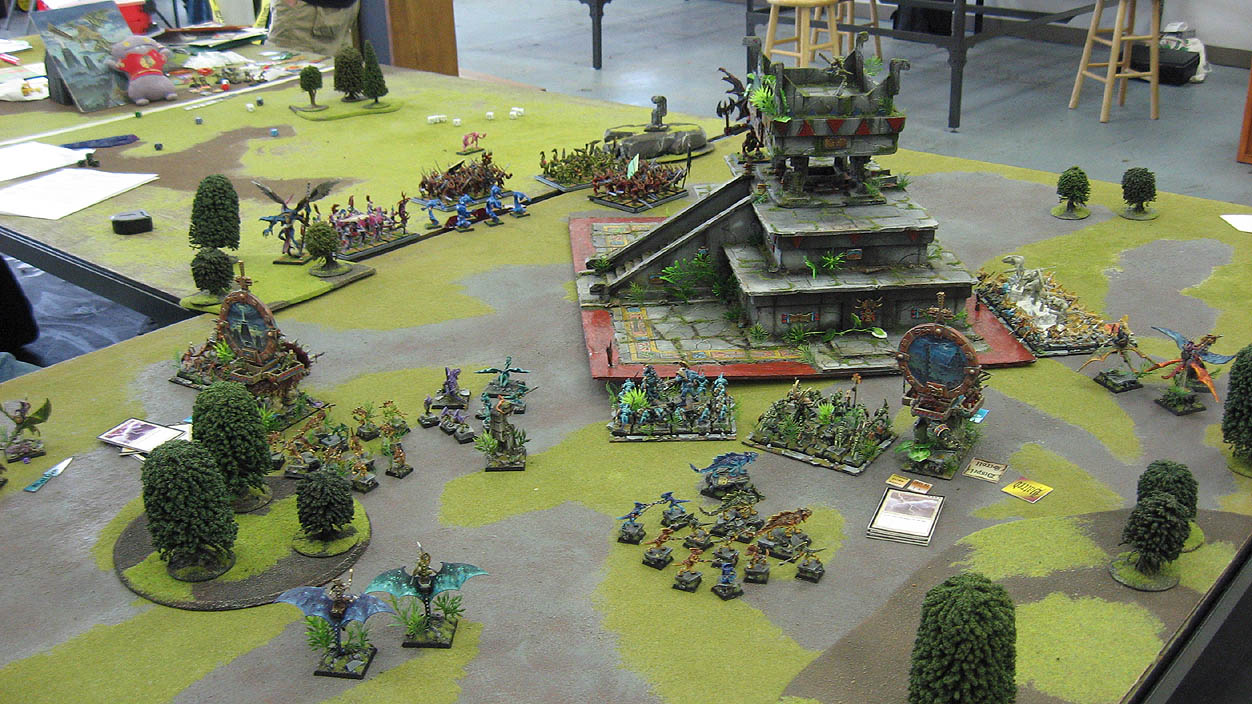 Some units break off the advance to the Temple, veering off towards the evil horde. 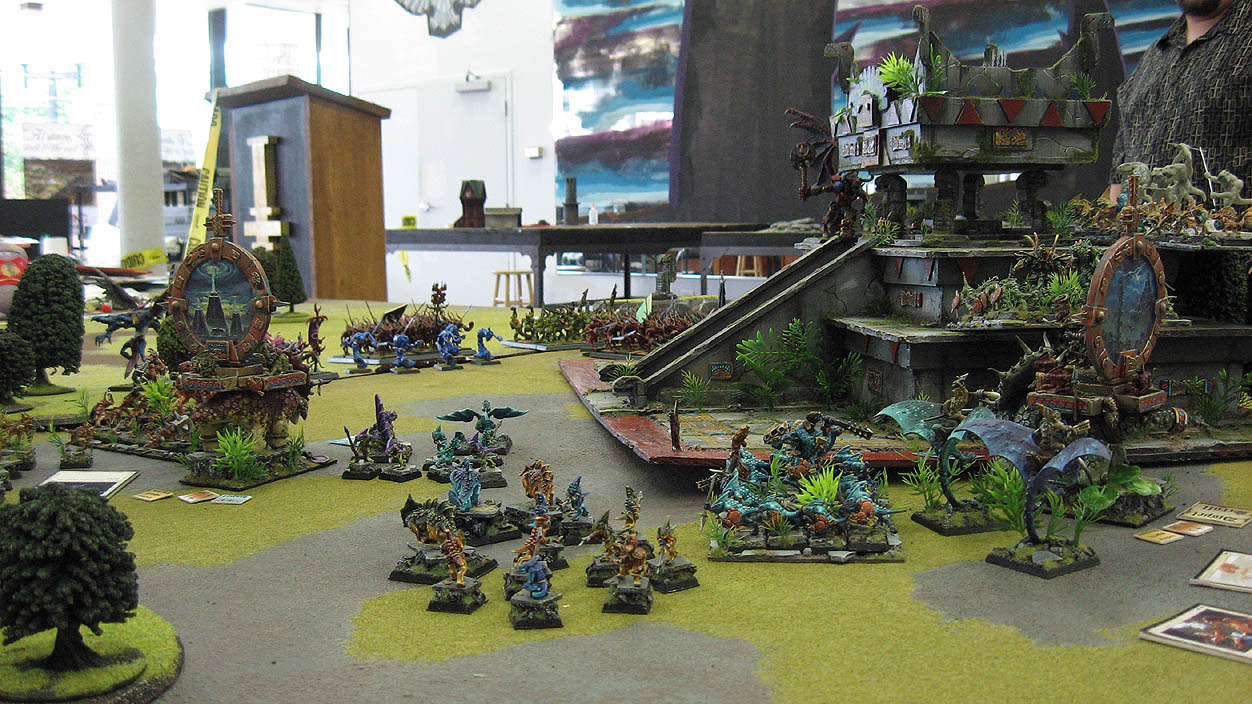 The Lizard vanguard climbs the levels of the Temple.  The other group prepares to sacrifice themselves by engaging  the Demons and slow them down.

The big skink and kroxigor unit suffers huge losses as the cross the deadly river of blood, as the Temple recognizes no one!  19 will die n the attempt. 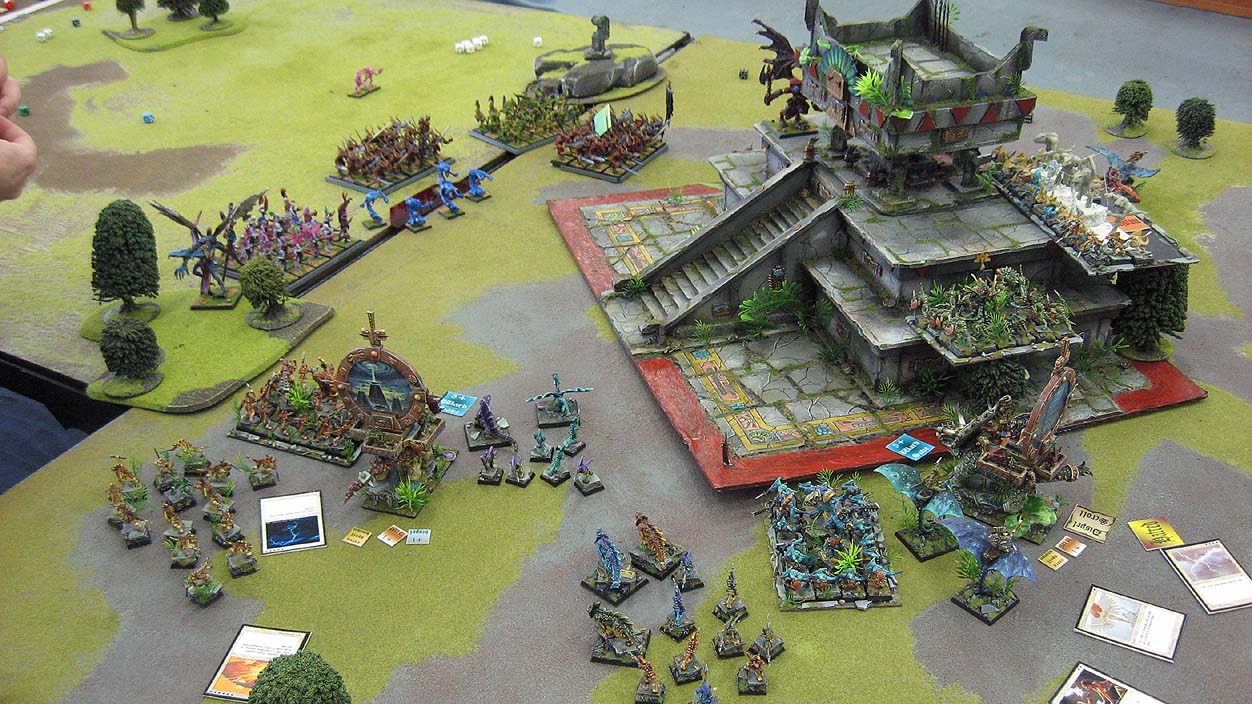 The flying demon lords prove to be even more mobile, as they are not hindered by rivers of blood... 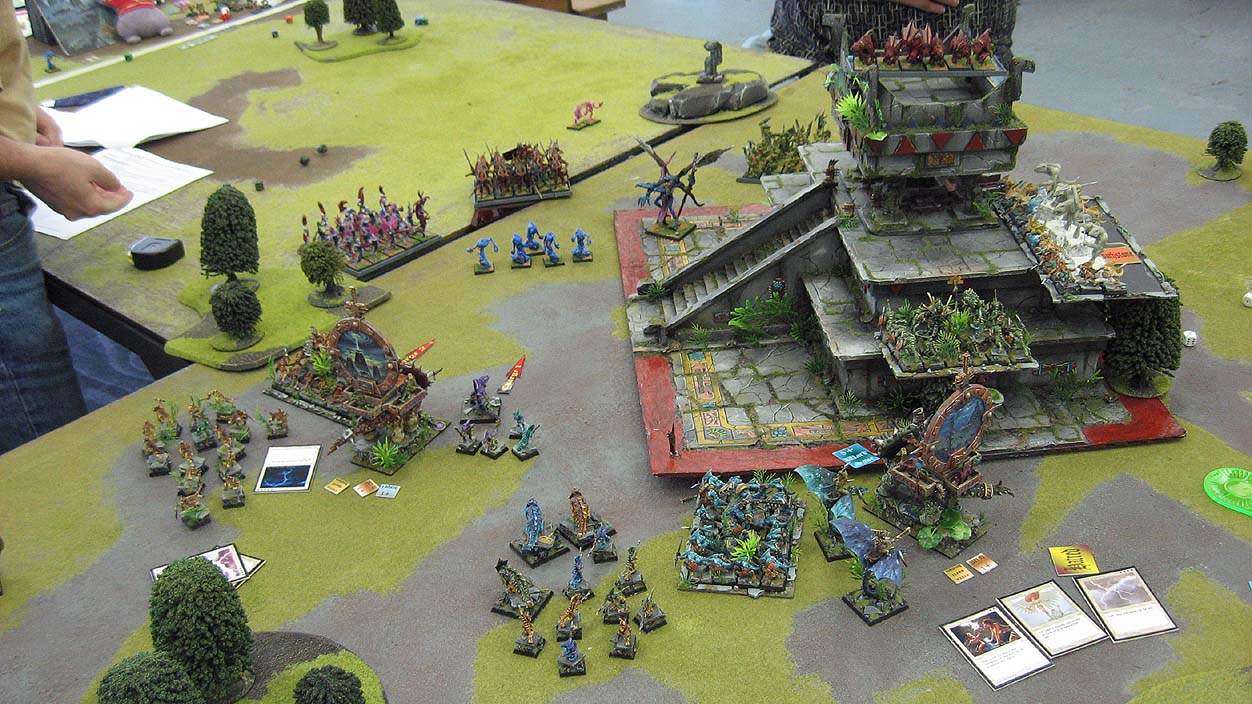 The Lizard units on the left engage the Chaos forces, hoping that the poisoned blowpipes and javelins of the skinks can fell the great Demon beasts...Magic flies, Engines of the Gods, crackle with mysterious energy, and blood is spilled. 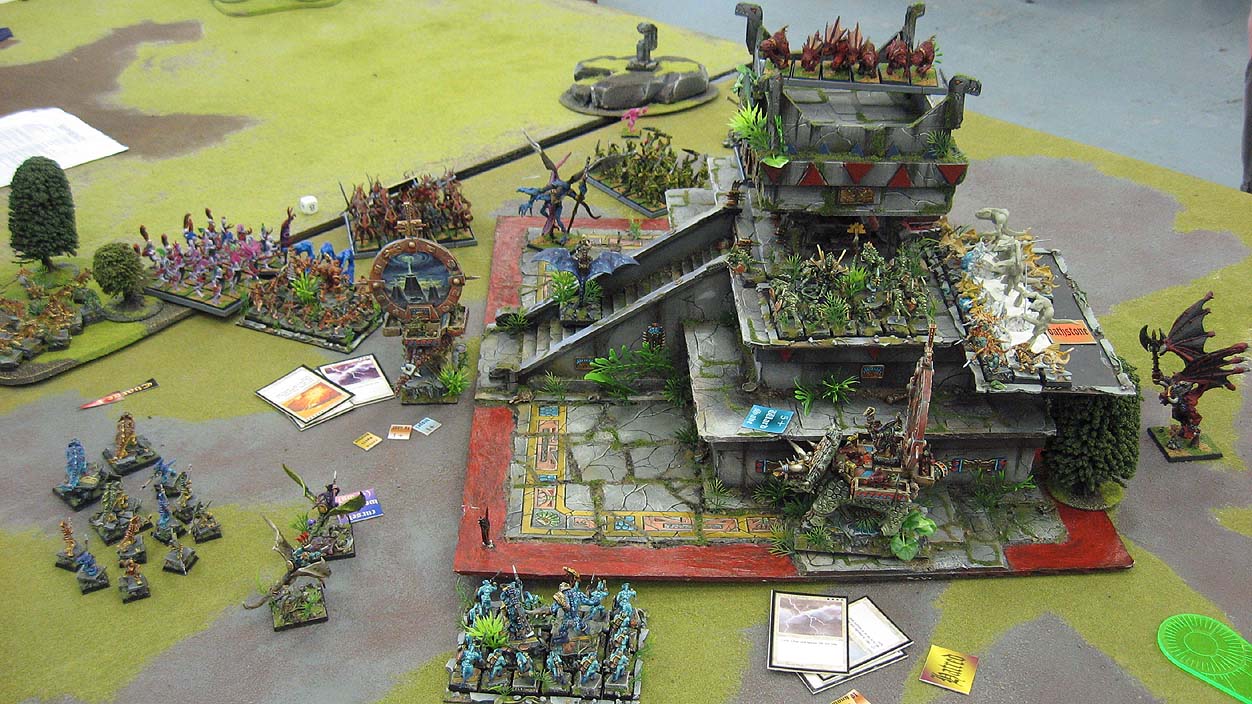 Lots of blood!
Eventually, the heavy magic of the Demons proves too great.  The baleful fire of the Tzeentch flamers fells too many brave skinks, and the Temple falls.  Can Lustria survive? 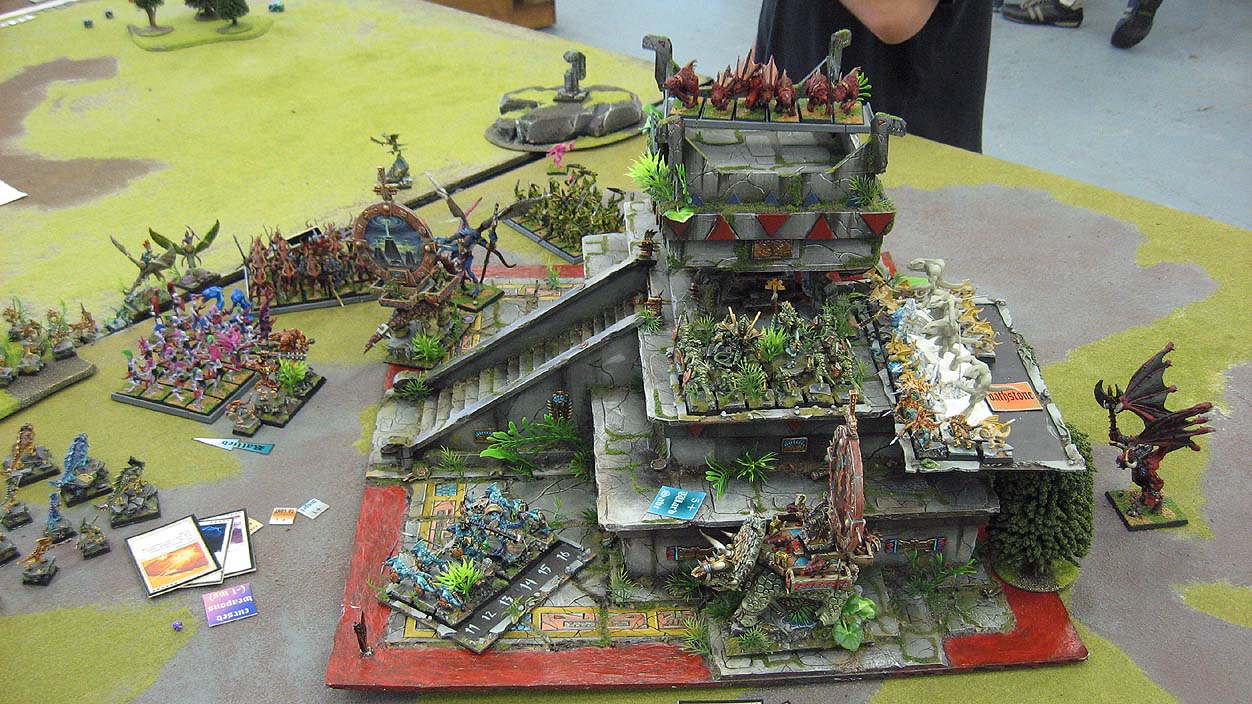 Here's that two page spread that started it all!! 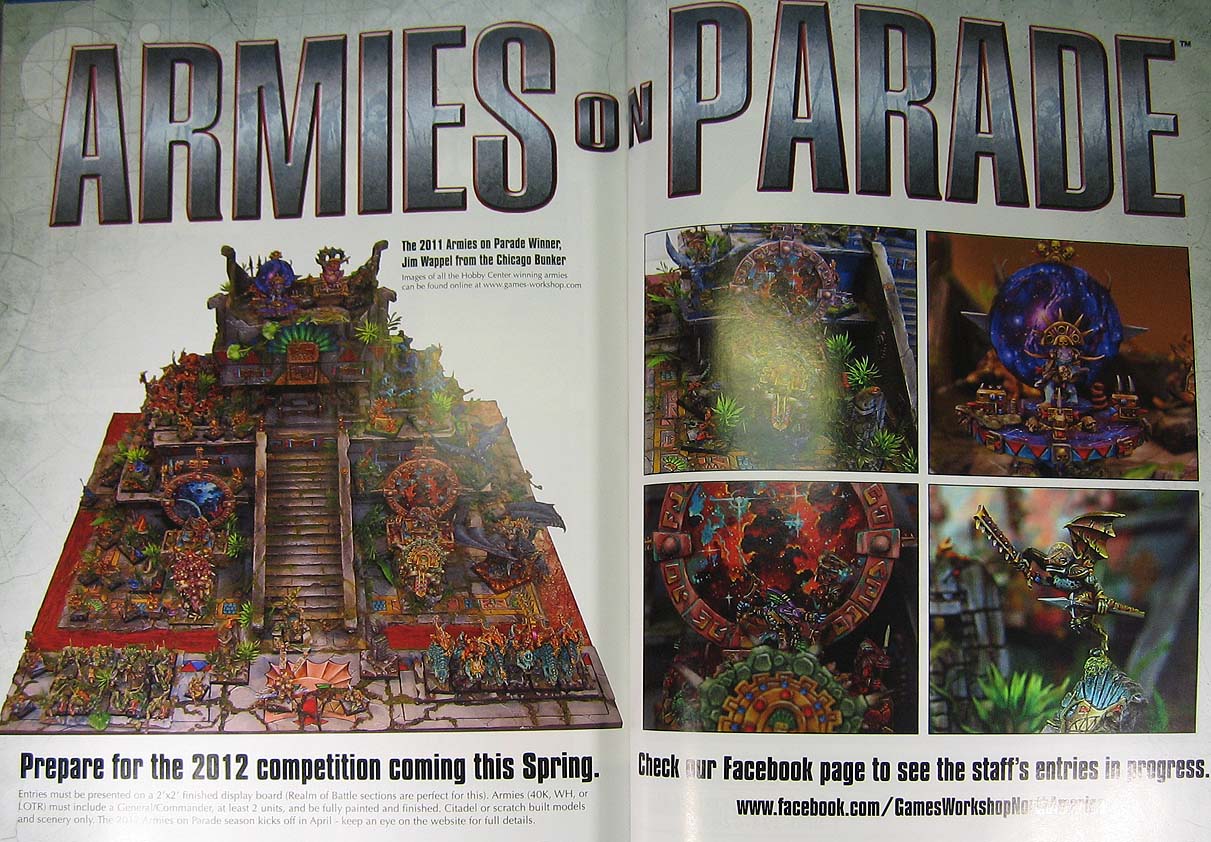