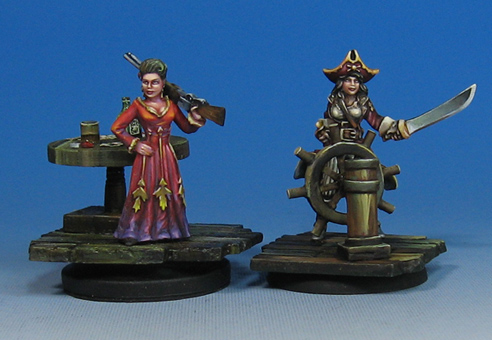 Even though these two pieces were painted many months apart, I thought a set of photos with them side by side might be interesting.

This, of course, is Francine James, the meanest Lady Gambler in the Wild West, and the Pirate Queen.  Both are Reaper miniatures. 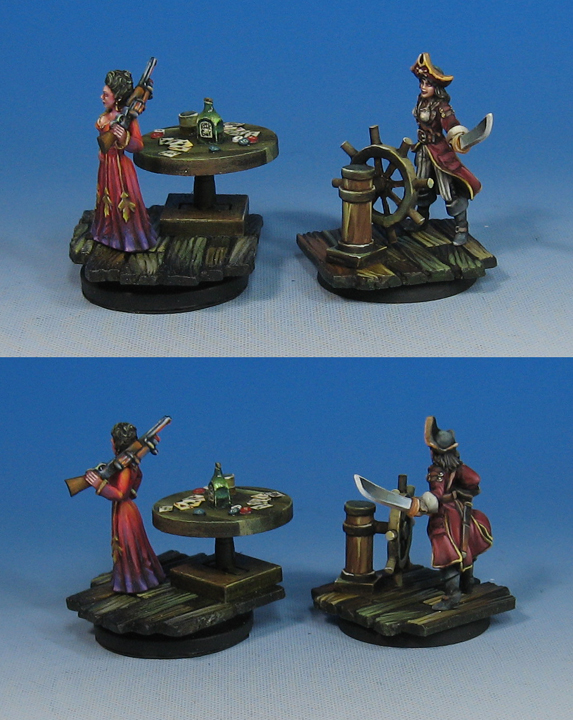 Each mini diorama is created with similar techniques, but the story and setting are obviously quite different! 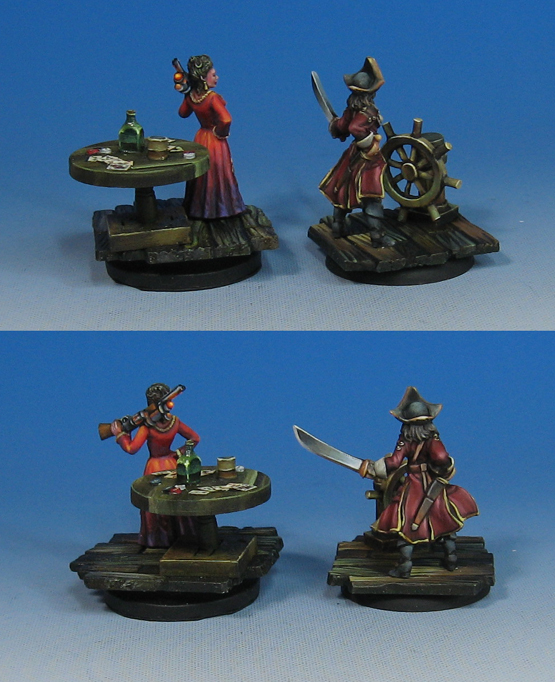 These top views give you a better look at the gambling table, and how the Pirate Queen was set in relation to the wheel. 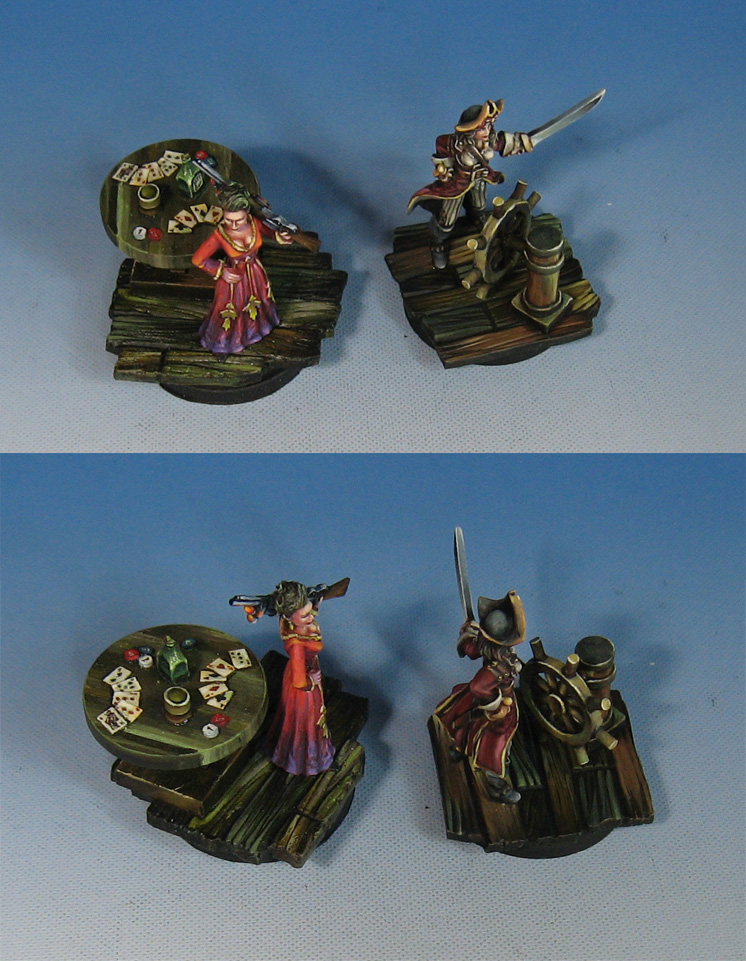 It is completely by chance that red was the predominant color of their outfits.  Again, they were painted many months apart! 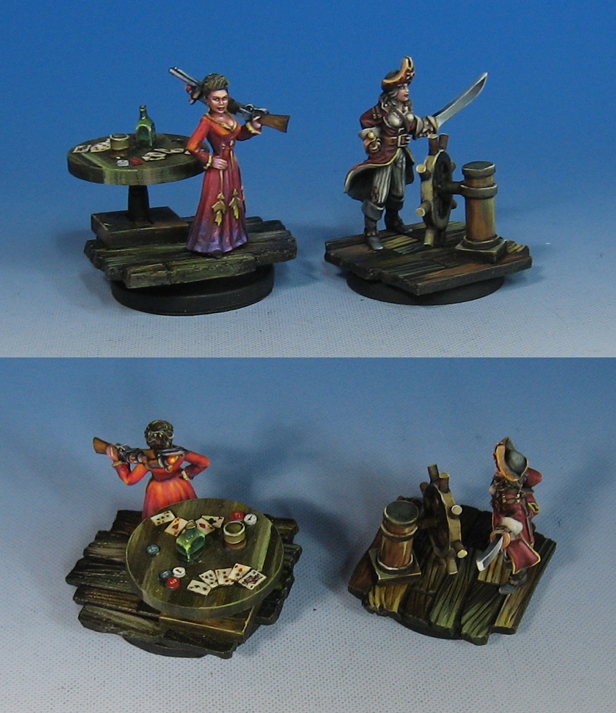 So, I hope you enjoyed this little review of the Seven Seas and the Wild West!! 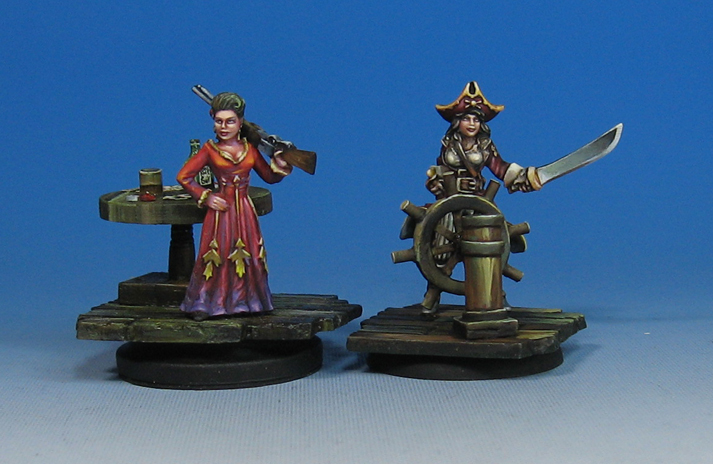 They always play with the Boxes! 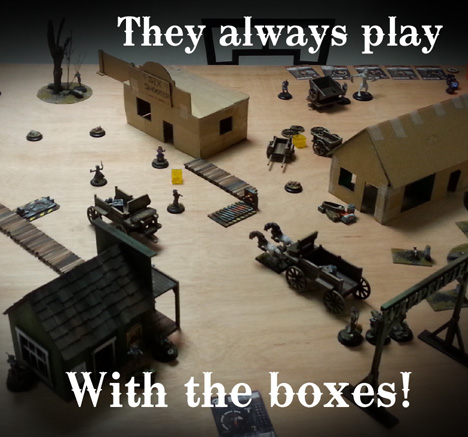 Boxes aren't simply for the enjoyment of kids and kitties... they are for adults too!!

Let's continue with the construction of Boxington. 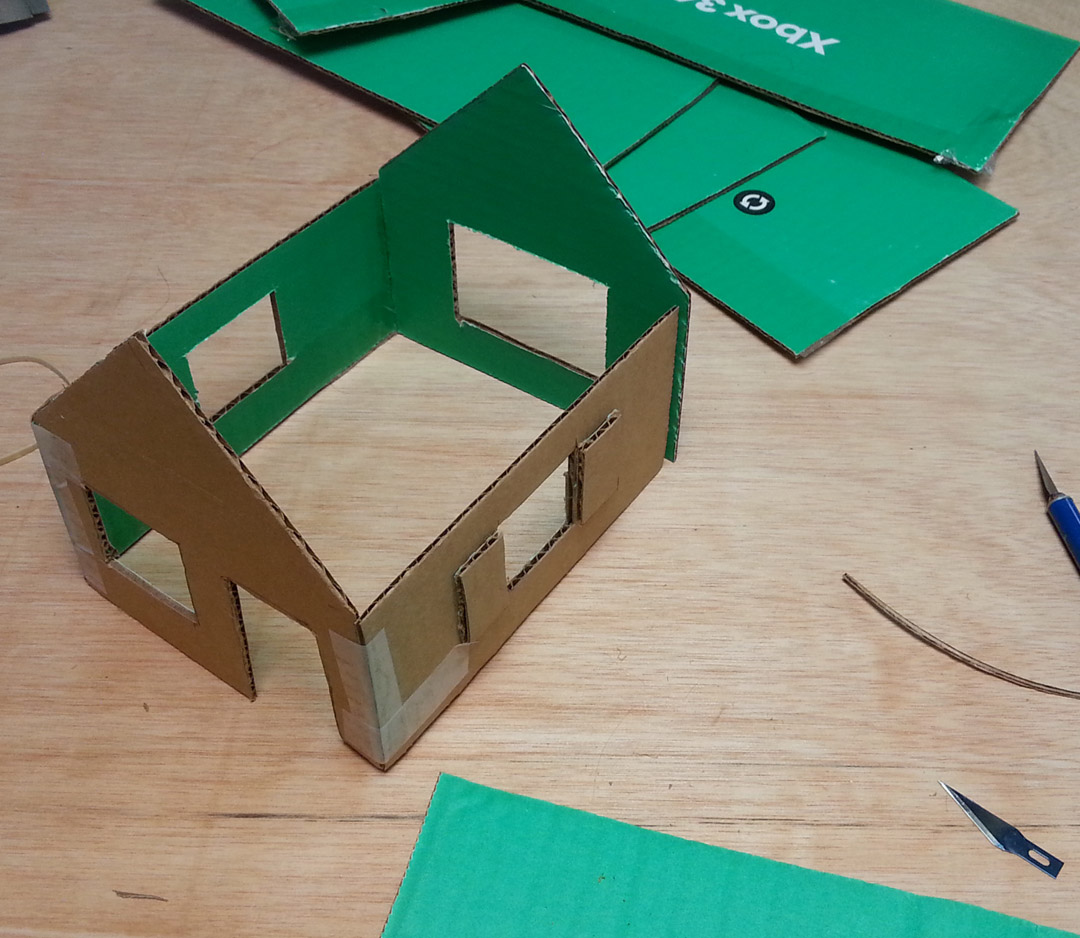 After the walls were attached, I needed to create a roof. Normally it would be covered in some kind of shingles to give it texture and additional strength.

However, I had less than an hour, and only these materials at hand.

I thought that some corrugated metal texture might provide something interesting, so I peeled off the outer layers of paper from a few panels of cardboard. 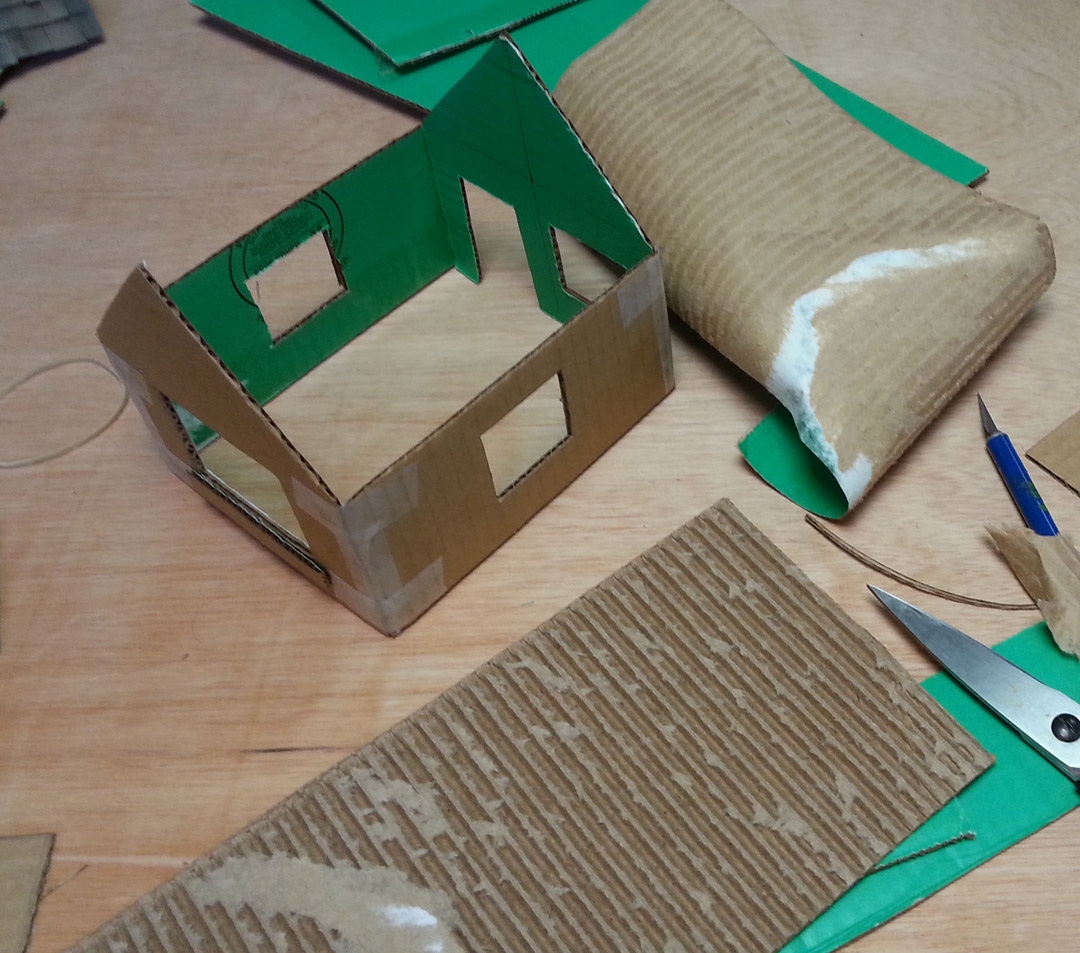 These were cut to size, and attached lightly at the top of the roofline. 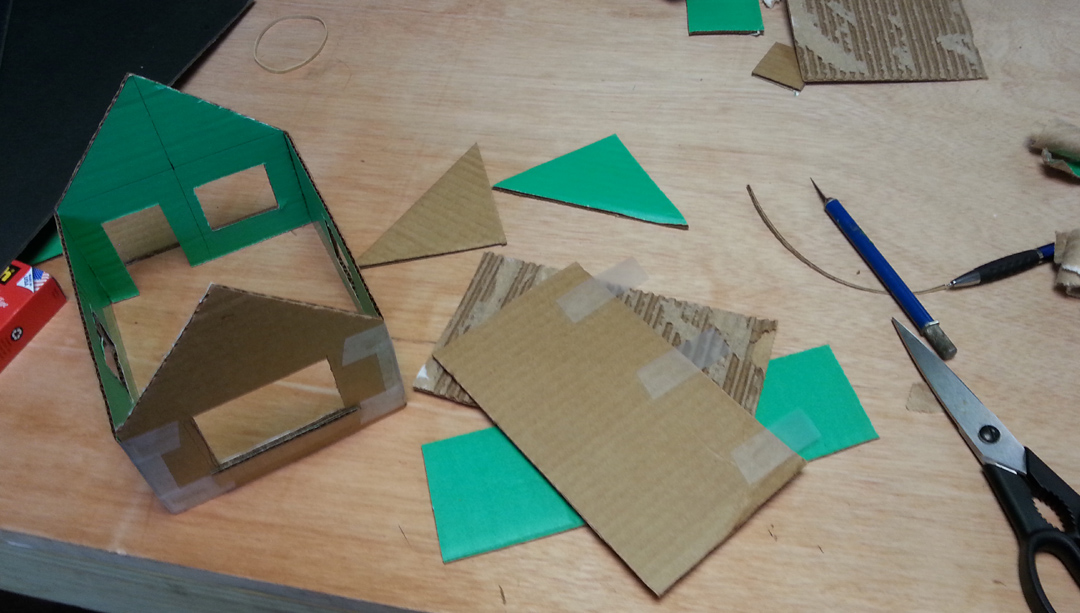 We learned early on in our games of Wild West Exodus that the roofs need to be removable.  To make the roof solid enough to do so, I needed to add a few triangles which matched the pitch of the main roof line.

These also had to be slightly shorter, so that figures inside the building would not interfere with the placement of this roof once they were inside! 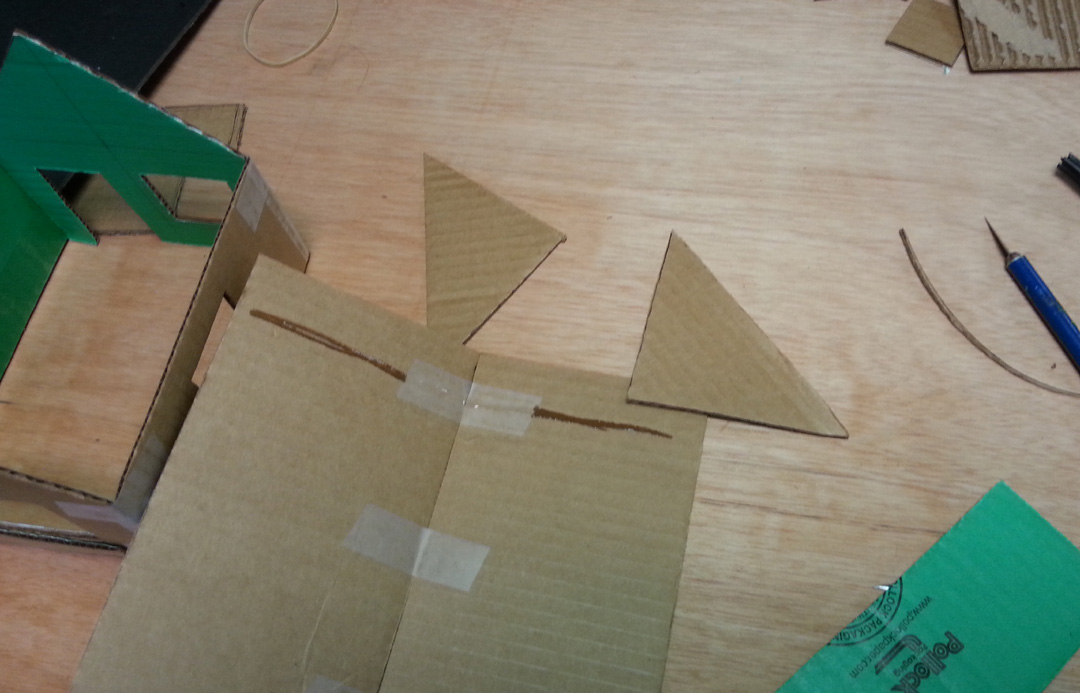 The first wedge is in place, and you can see how it is about a half inch short of the point where it would meet the side walls. 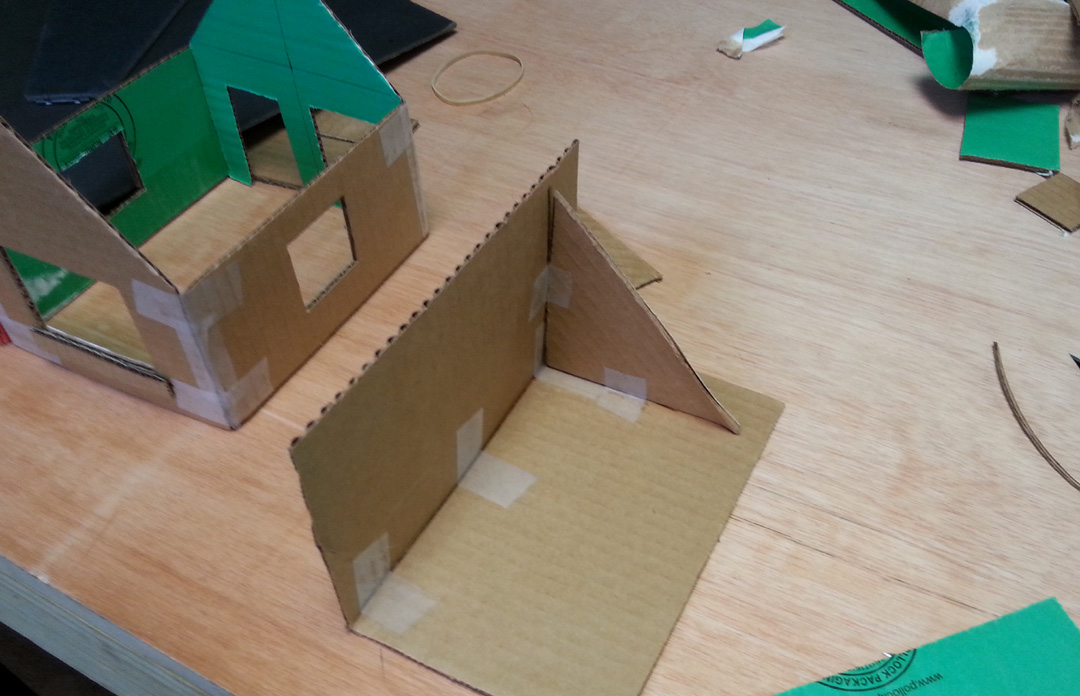 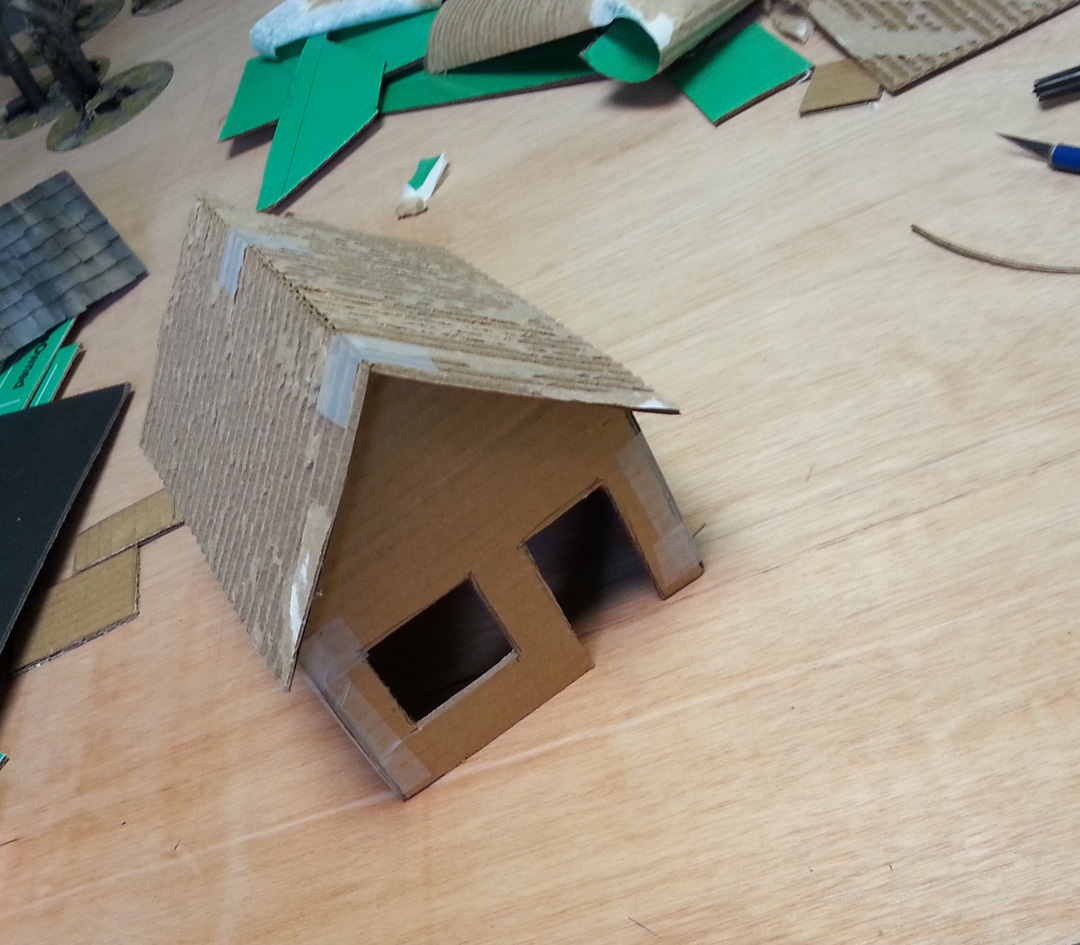 One removable roof, ready for gaming. 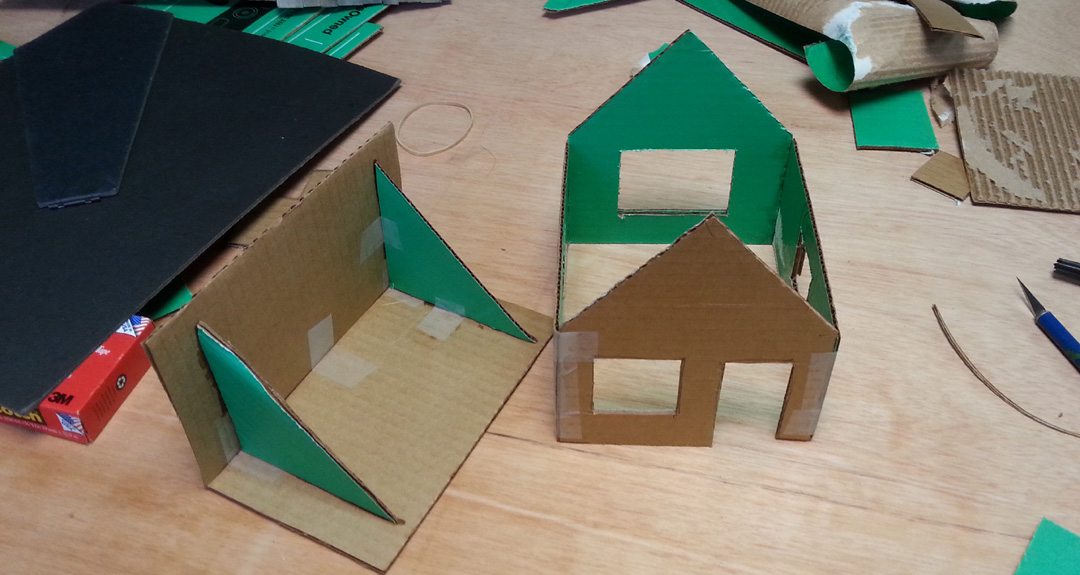 I wanted to make a few more buildings, but I could tell that I was going to run out of cardboard.  I decided to make a longer building with a room separator inside.  That would give the roof a little support.

It's also possible to have room to room fights in WWX, so I wanted that option to be available. 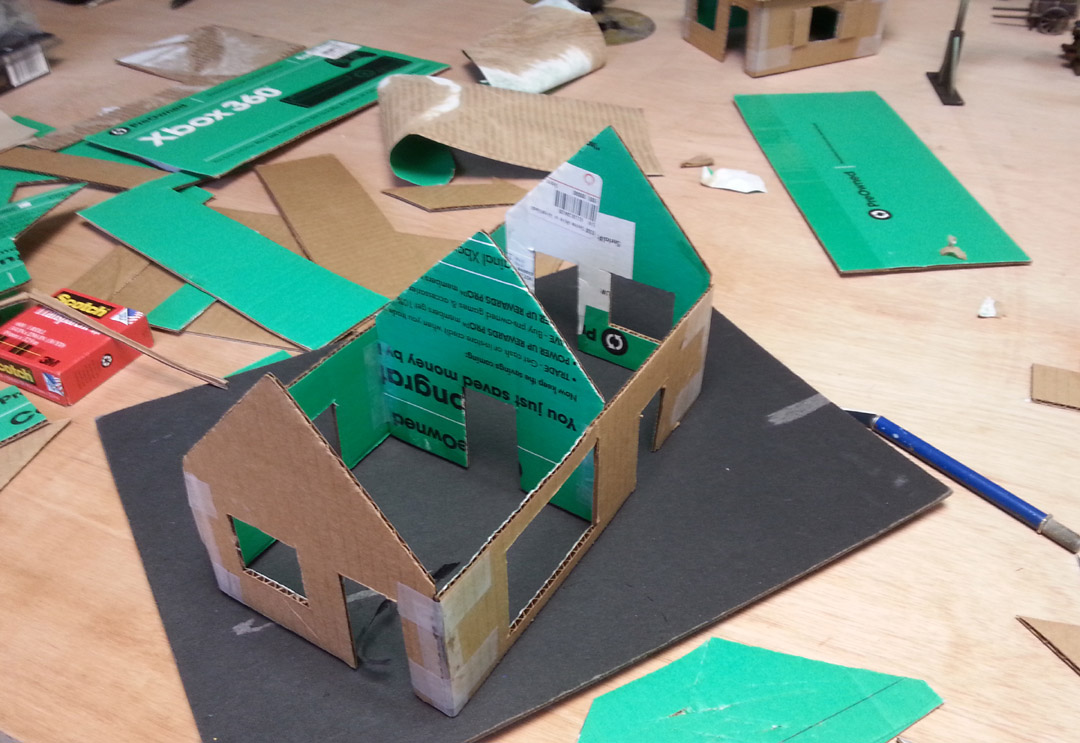 Interior roof struts being added for that stability... 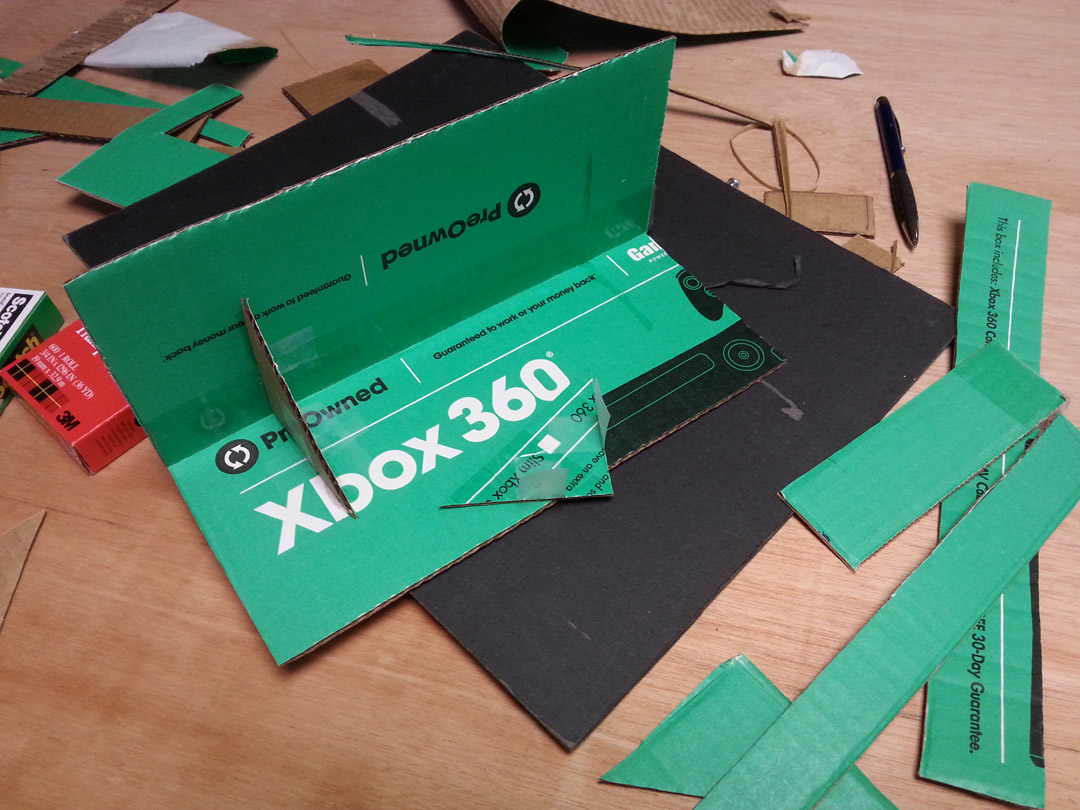 Two buildings in a little over 40 minutes!! 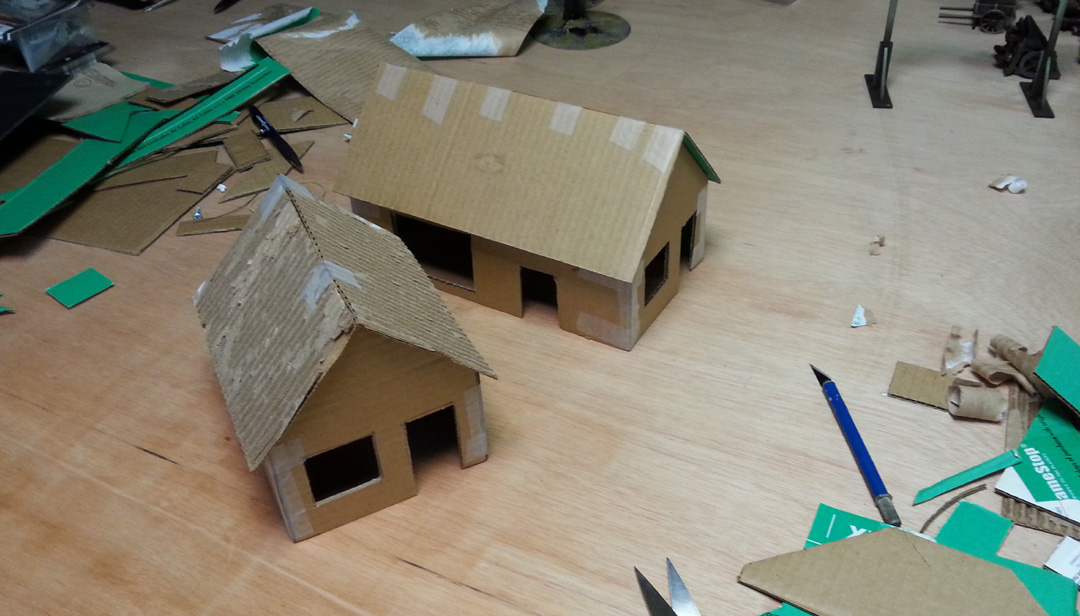 To add a little spice to my magnetized box/building, I cut out a façade to put on top.  This was not only decorative, but sized in order to allow a figure with a rifle to take cover behind it and still see out.

Why not take advantage of that flat roof! 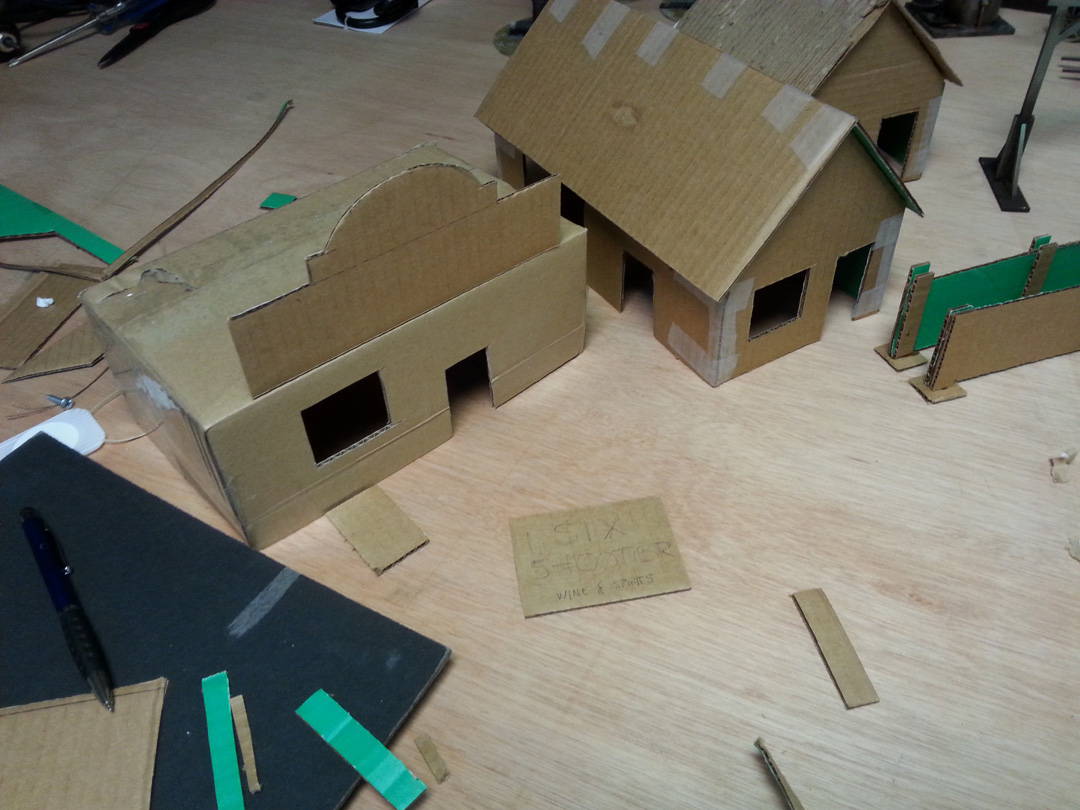 In the final minutes I had left, I cut out some fences using the scraps, and painted a very quick sign for the Six Shooter Saloon. 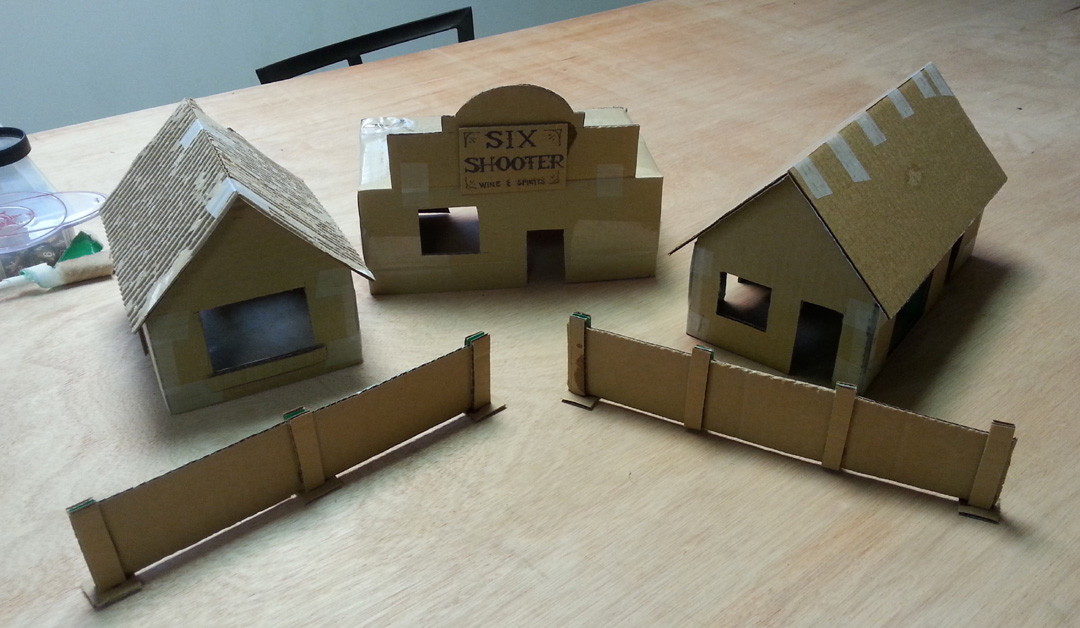 This supplemented the buildings and trees that I had available to create a decent board for the demo game. 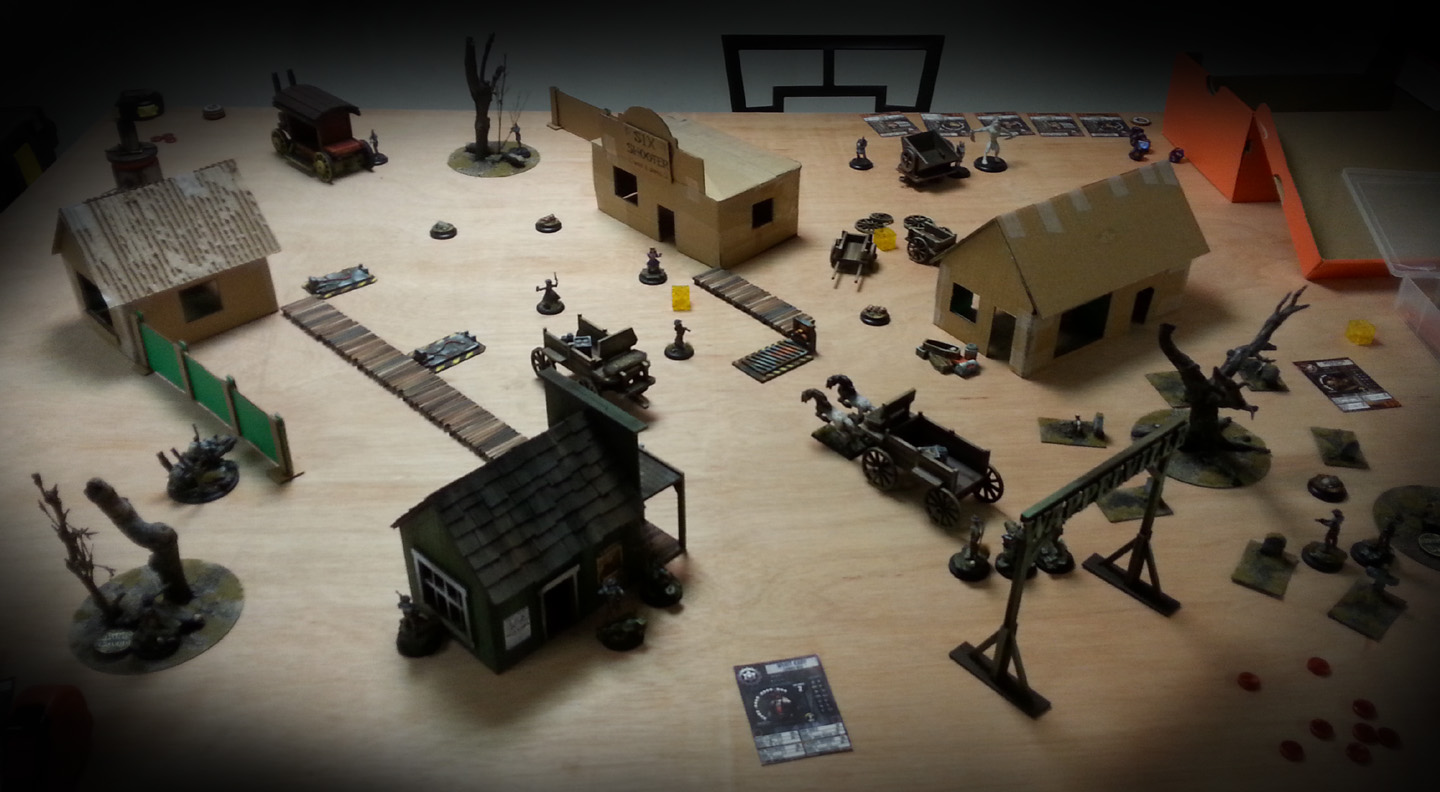 Lawmen and Warrior Nation fighting it out in the streets of Boxington!!

When will the violence end? 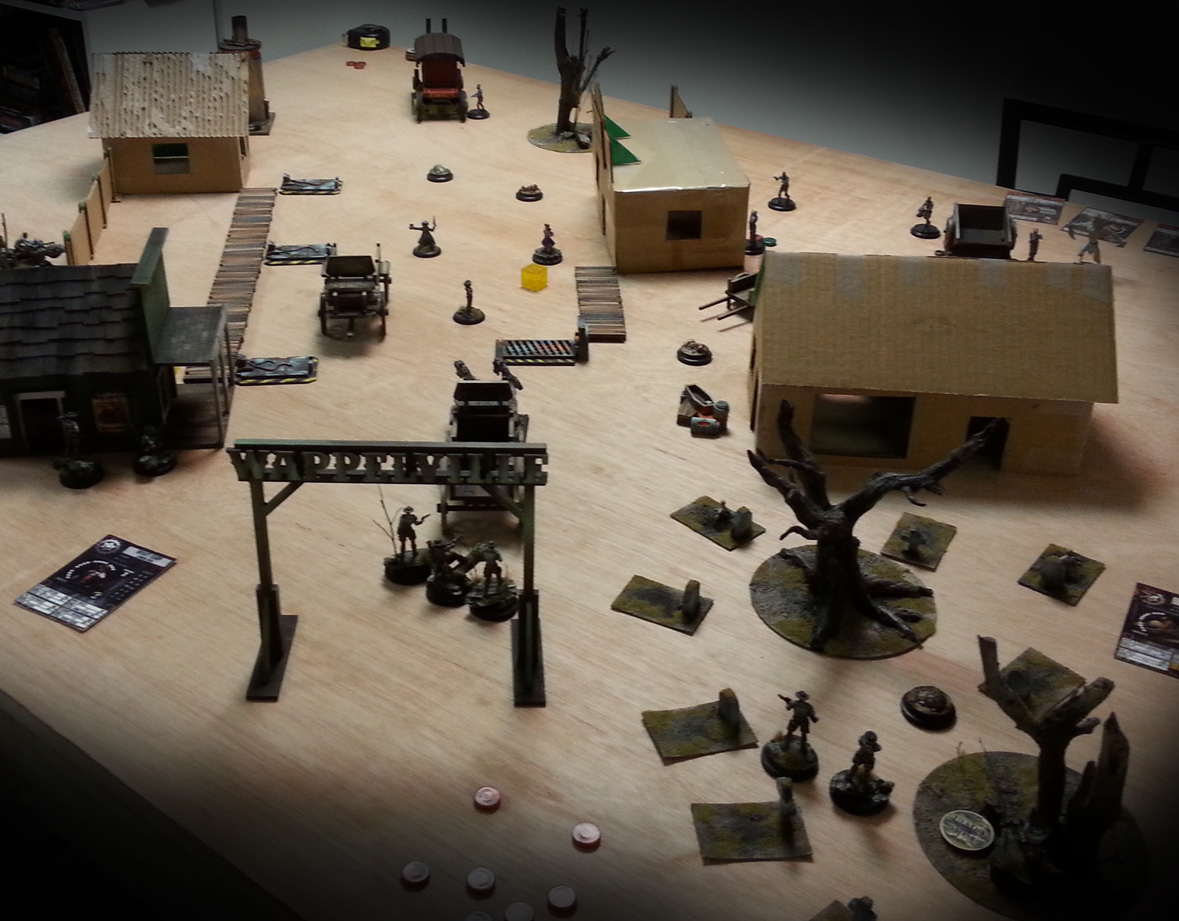