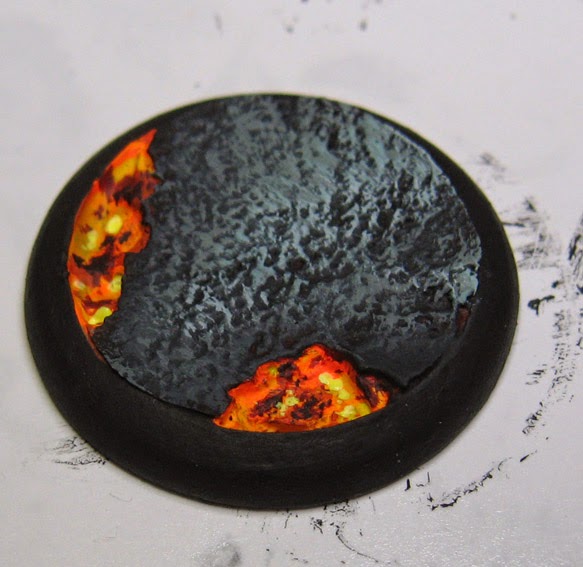 So, for the moment, we see stage #1 of the Contrast Hat Trick... value contrast.  It's the easiest one to achieve.  All it takes is really dark against really light colors.  Simple.  Sort of. 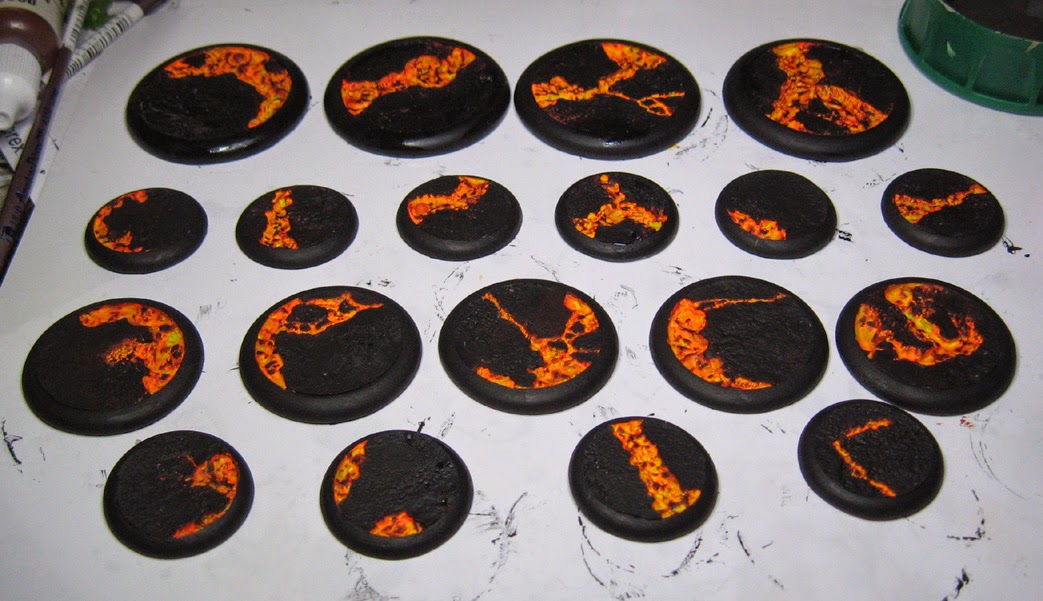 This is the second stage, color contrast... via color temperature.  This means making the cooled lava a cooler color.  I am mixing a subtle light blue into the black in order to do this. 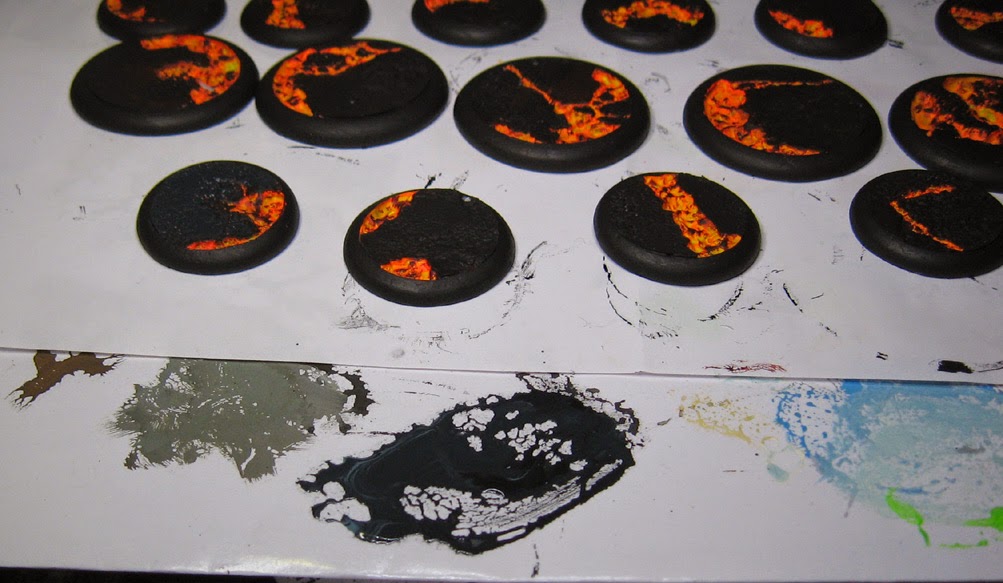 Layer number one.  Comparing the value next to the outer ring shows that it's getting slightly lighter as well. 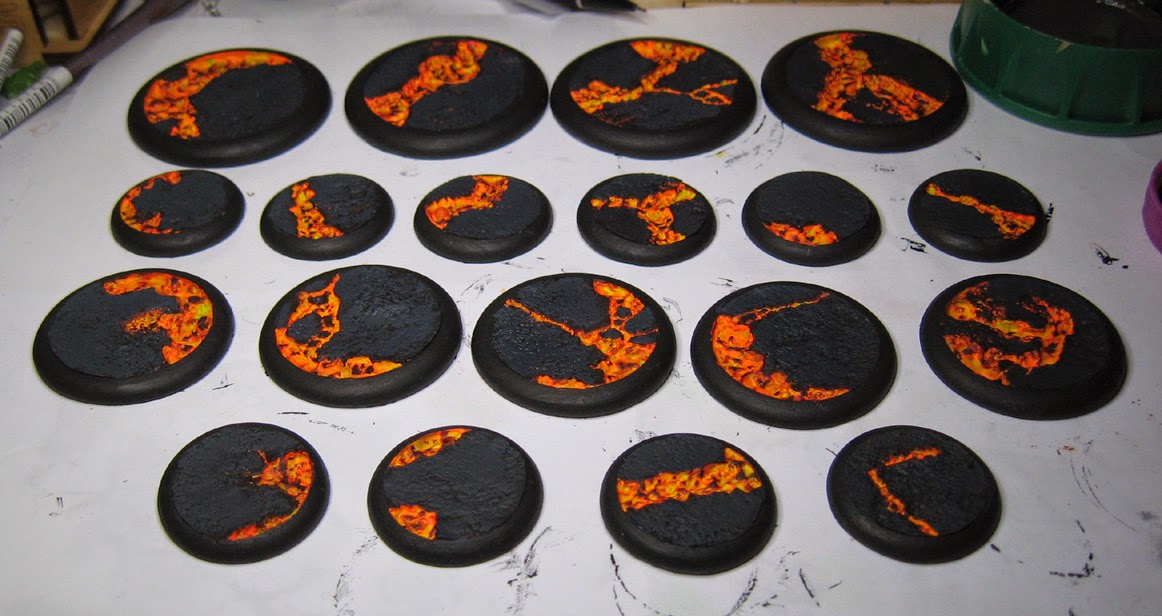 A little more.  For this point forward on subsequent layers, I will focus only on certain 'zones'. 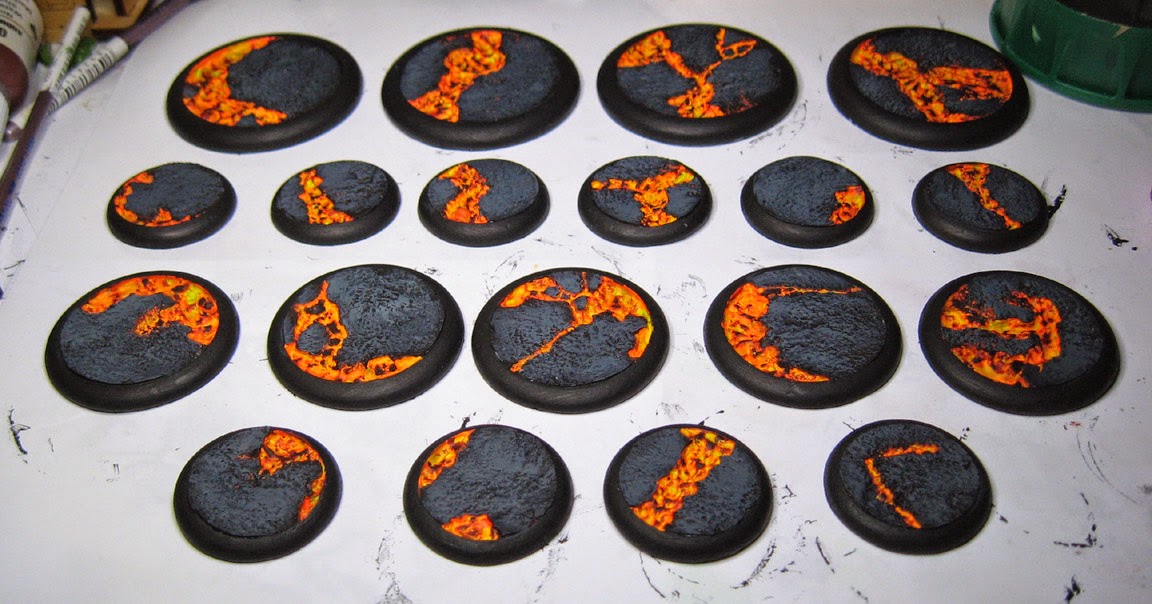 With this next layer, you can see the direction I am moving in adding the extra lights to the cooled lava sections. 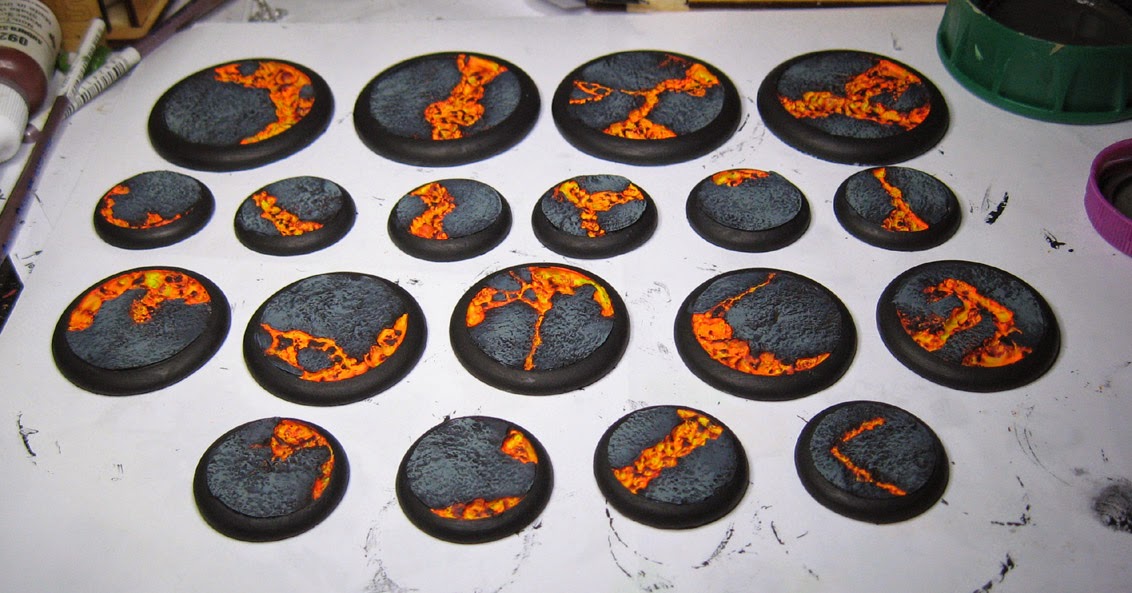 This shows that pattern, and the series of colors mixed.

Notice how the lighter parts are not 100% coverage on the cooled lava sections... just in certain places. 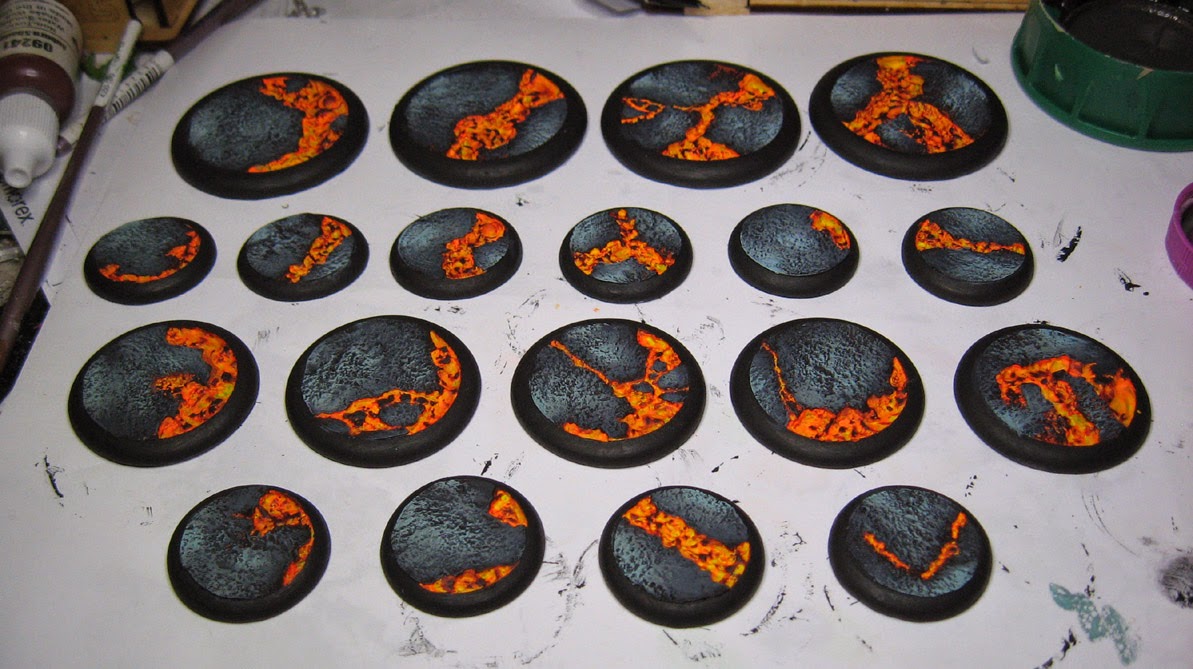 Now that I know how light the cooled lava is, I can go back into the lava itself to bring out the lightest lights.  This means fluorescent yellow, regular yellow, and even a touch of ivory.

I used flow improver to thin the mix, as the fluorescent paints tend to be quite thick. 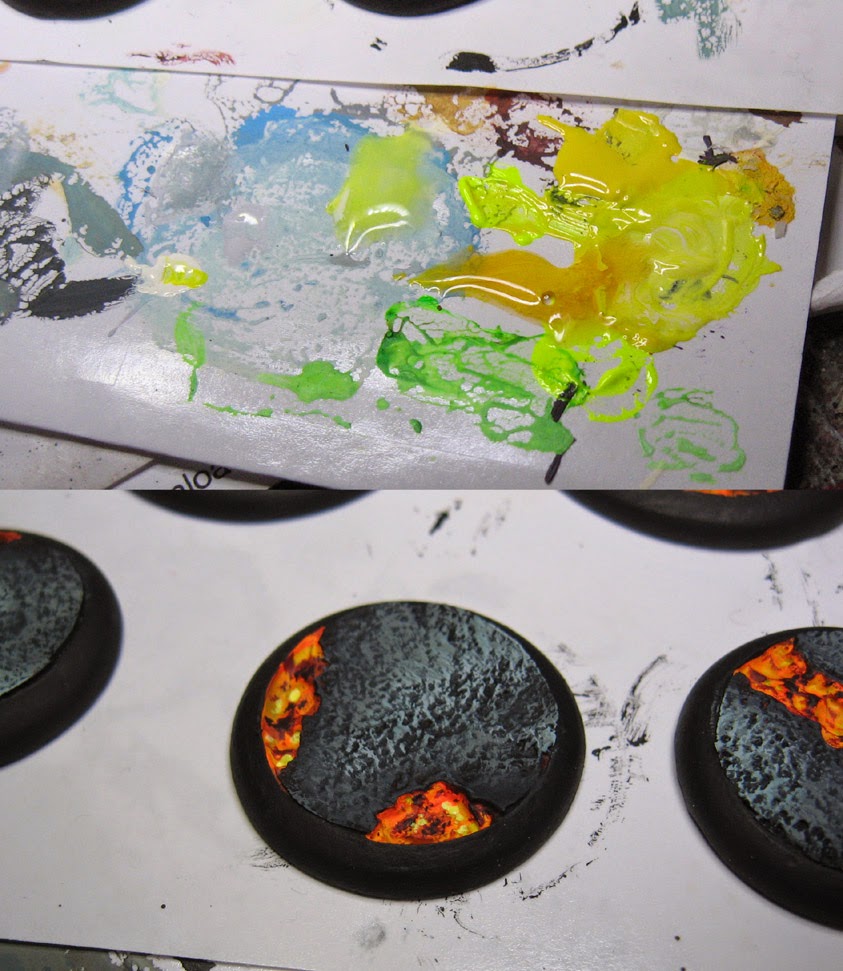 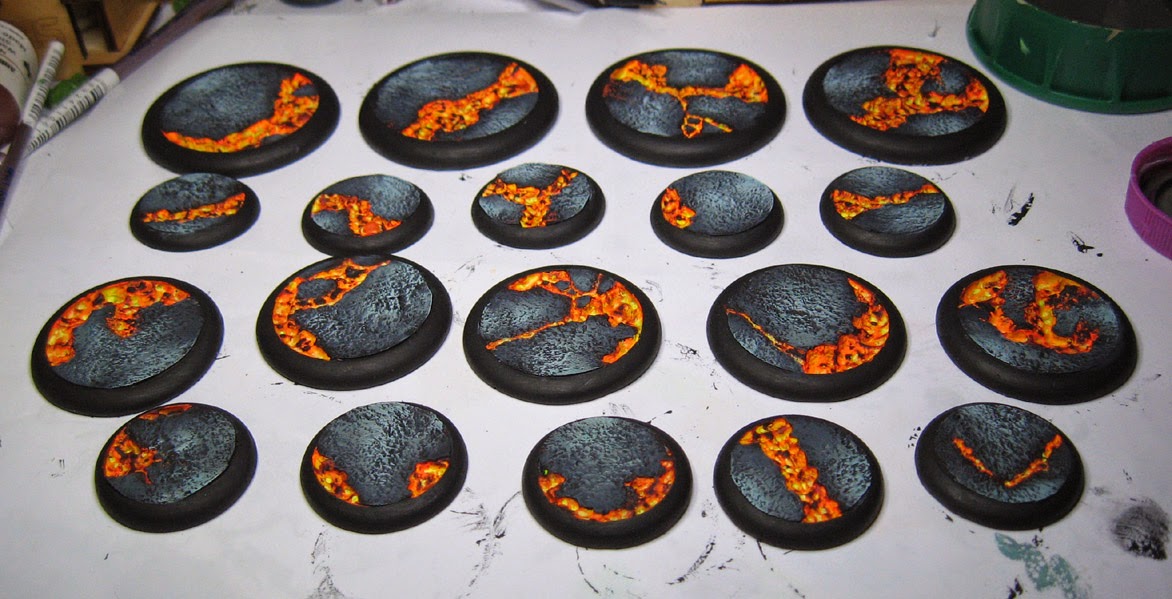 I went back in with the amber and fluorescent orange mix to take down any weird drybrush textures that may had cropped up. 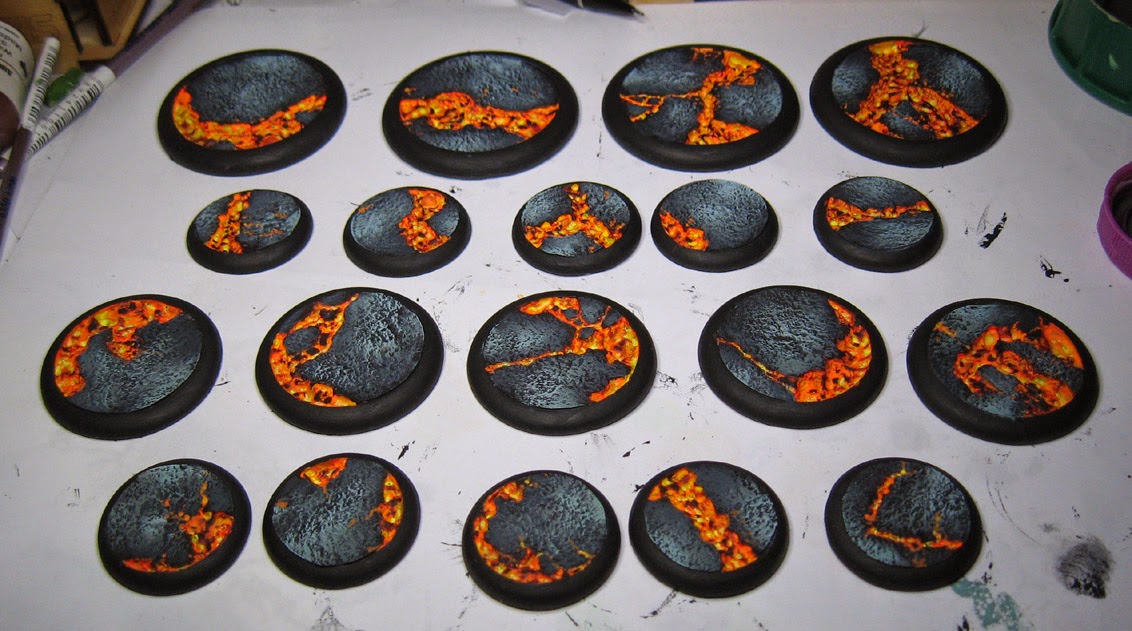 I took this a little darker, especially along the edges of the lava... 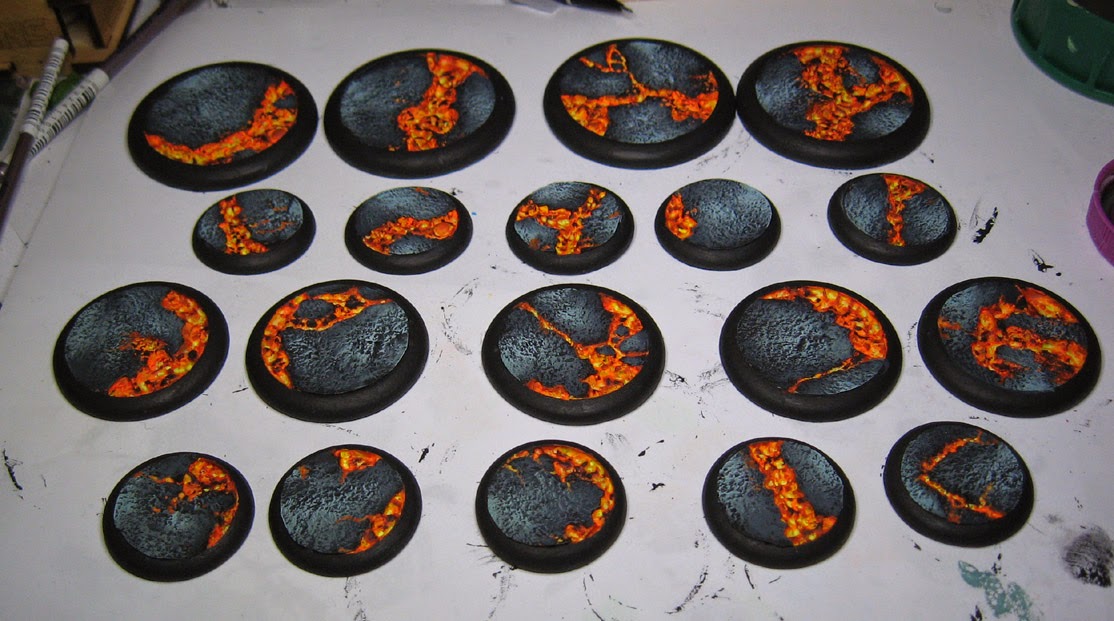 I mixed up a black glaze to darken a few key areas on the cooled lava.  This was to accentuate contrast #1, but also contribute to contrast #3, which is the most tricky.

That is hue and saturation.  Obviously, the lava is super saturated, high chroma color.  Very pure and bright.  The cooled lava sections are, by their nature, grayed down (or toned down).

This is the most subtle way to achieve contrast.  It was one of the last things I ever mastered in my 2D painting.  Lots of practice. 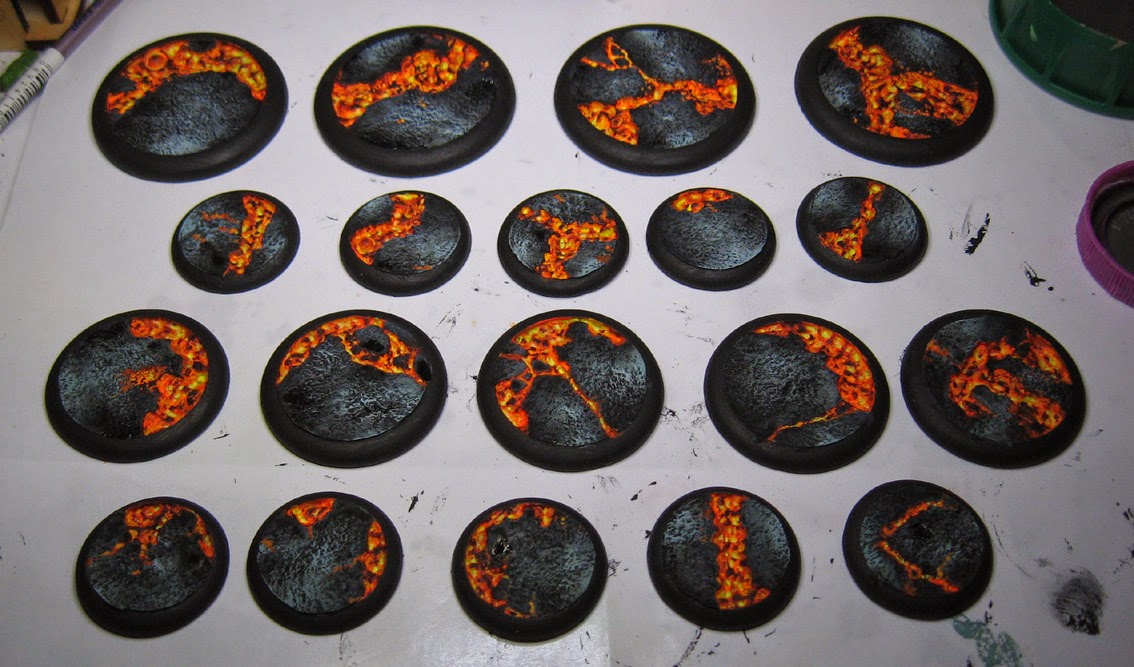 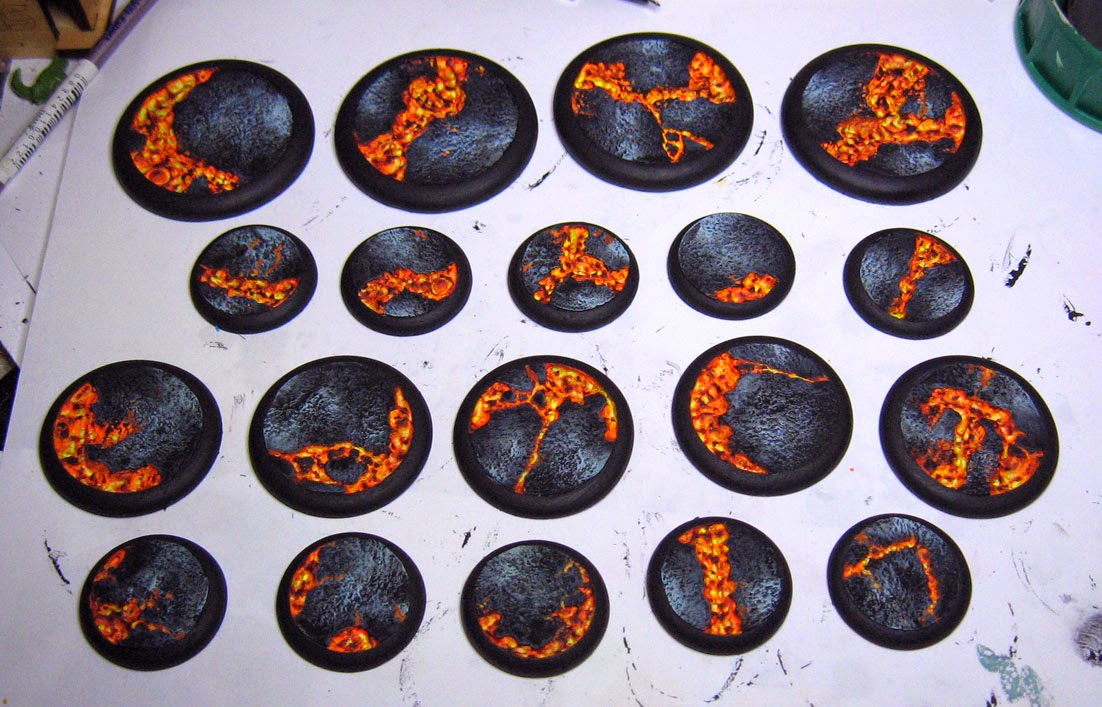 Posted by wappellious at 1:25 PM 2 comments:

Turning up the heat... 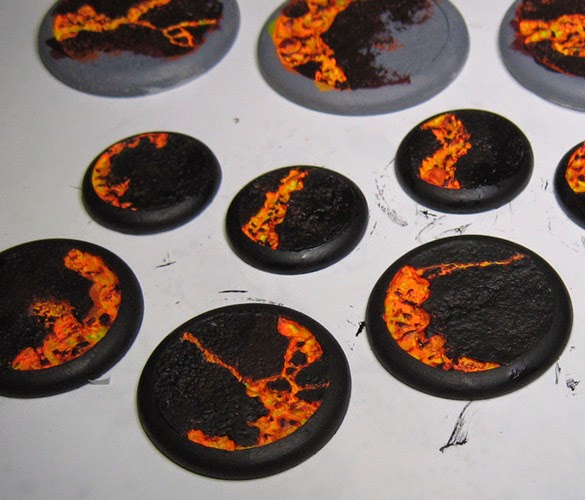 OK, time to prime!  This is another nice feature of Secret Weapon resin products.  As I have mentioned before, you don't have to waste endless hours washing and scrubbing mould release.  Just grab your primer, a brush, and get to it!!!

Let's start with the lightest colors first, including the fluorescent yellow. 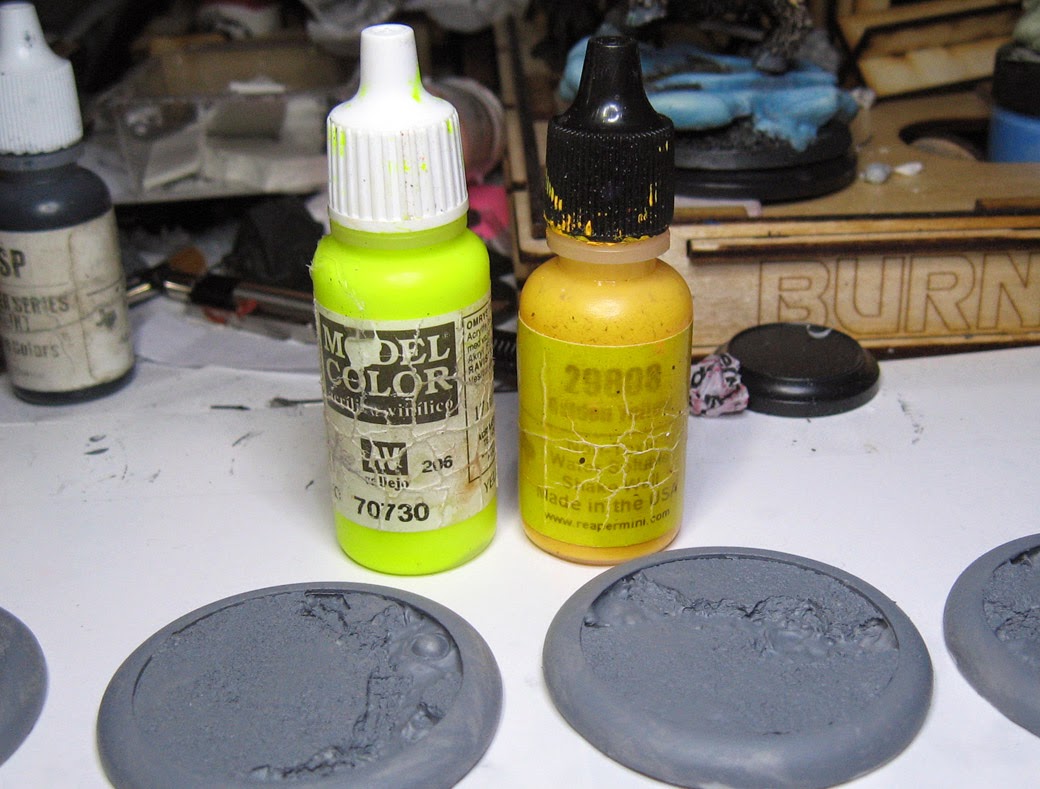 This part of the effect will be worked even lighter at the end of the project, once I get to see how all the darker areas play out. 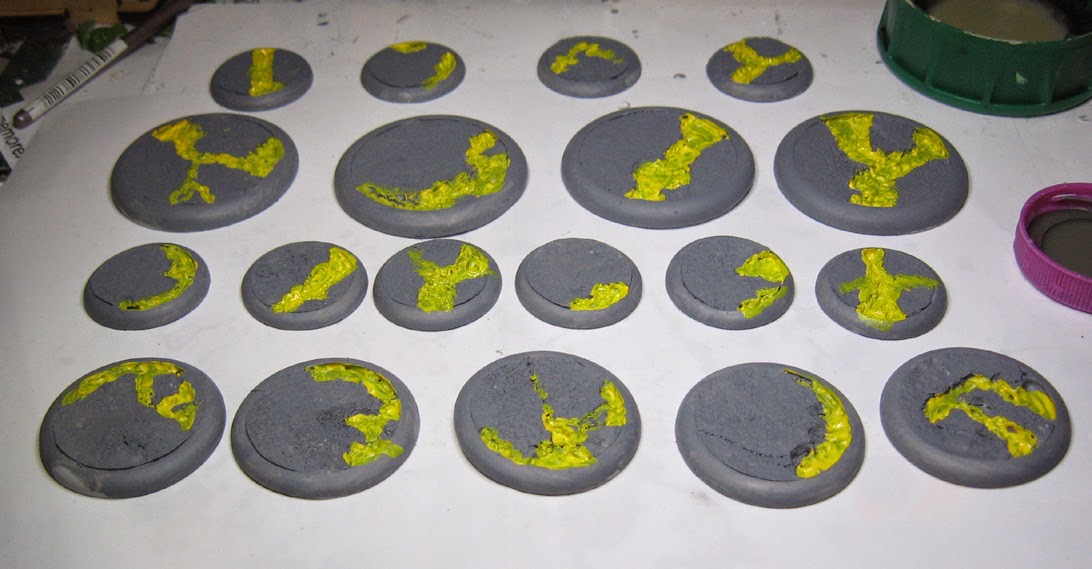 Fluorescent orange is added to the mix. 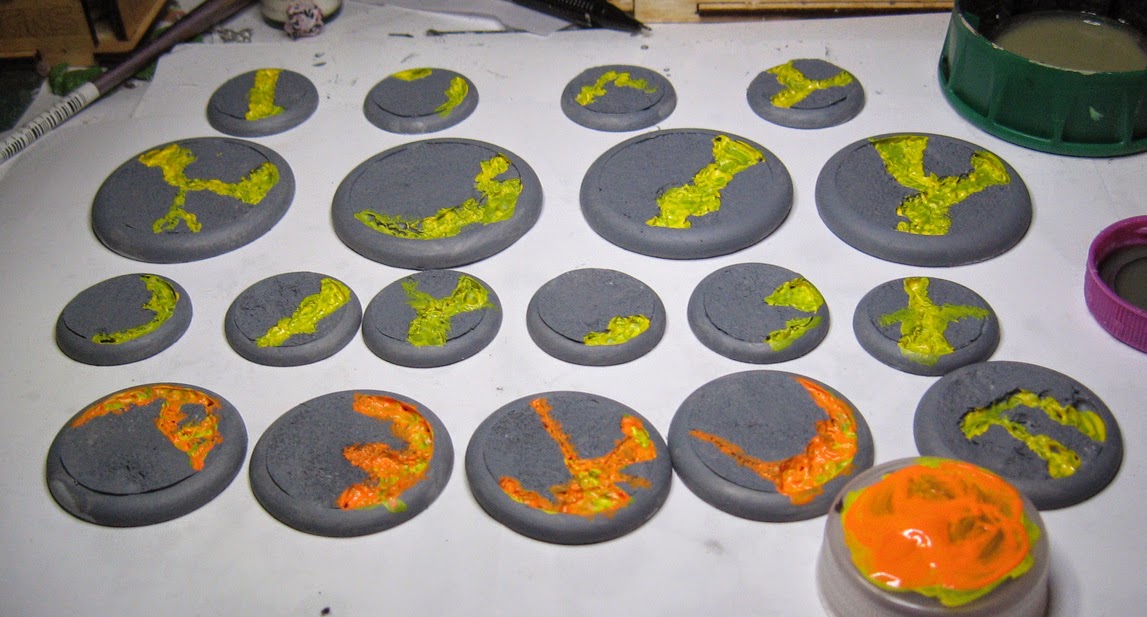 I keep a supply of the 'regular' bright yellow color on hand, which I use to keep the additional layers of paint wet enough to blend on the base itself. 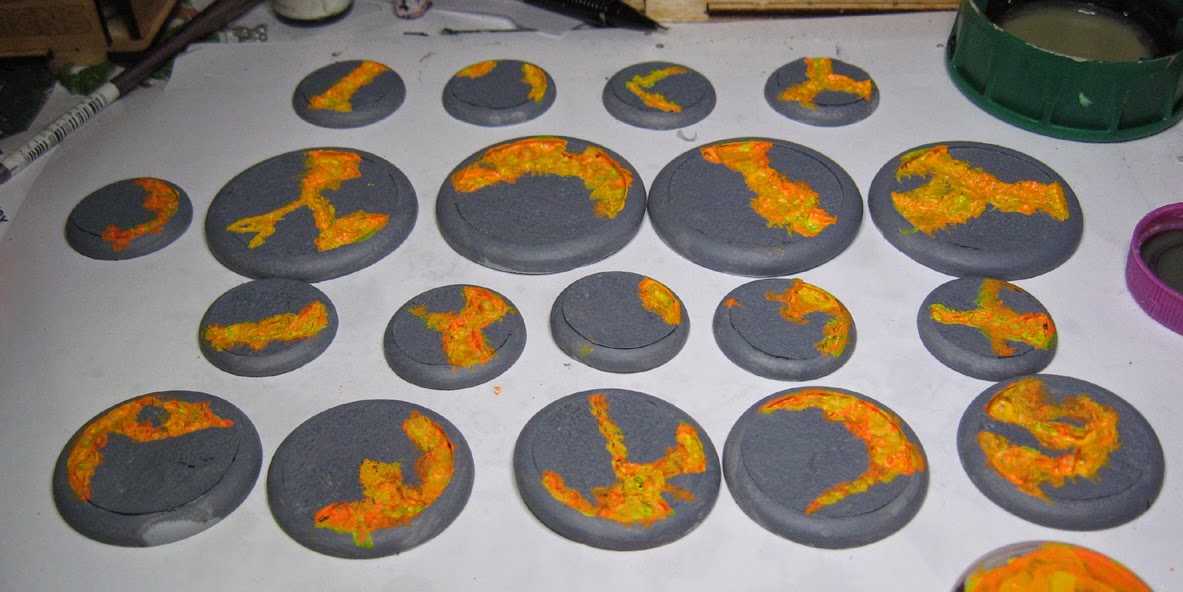 You're getting warmer!  Orange complete. 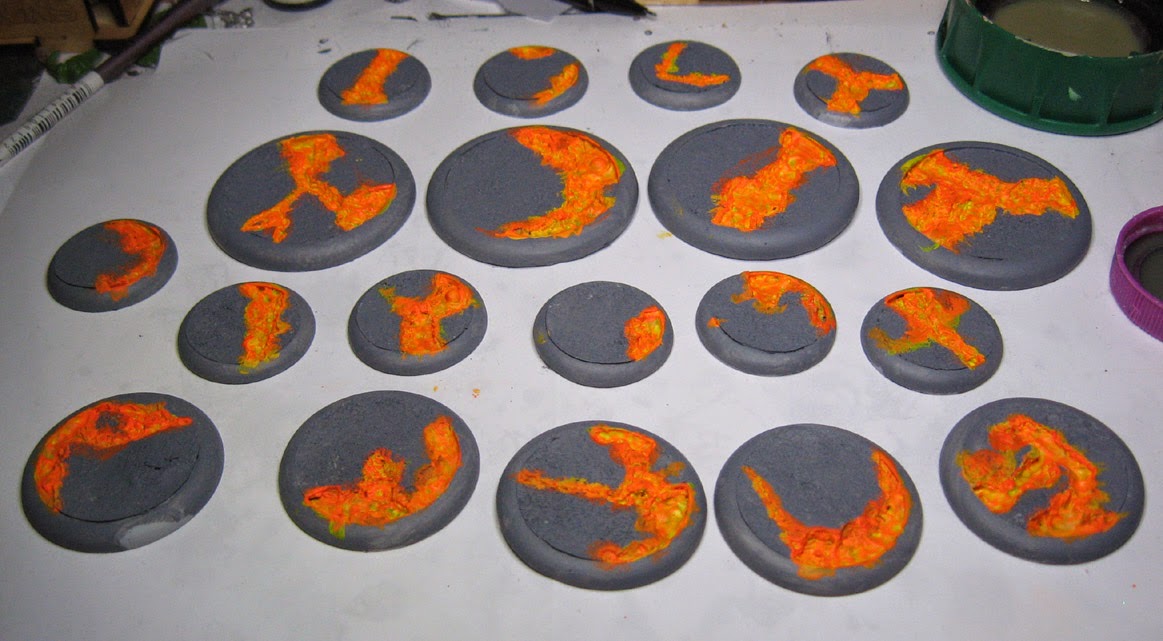 Now for some burnt orange, with a touch of the fluorescent orange mixed in. 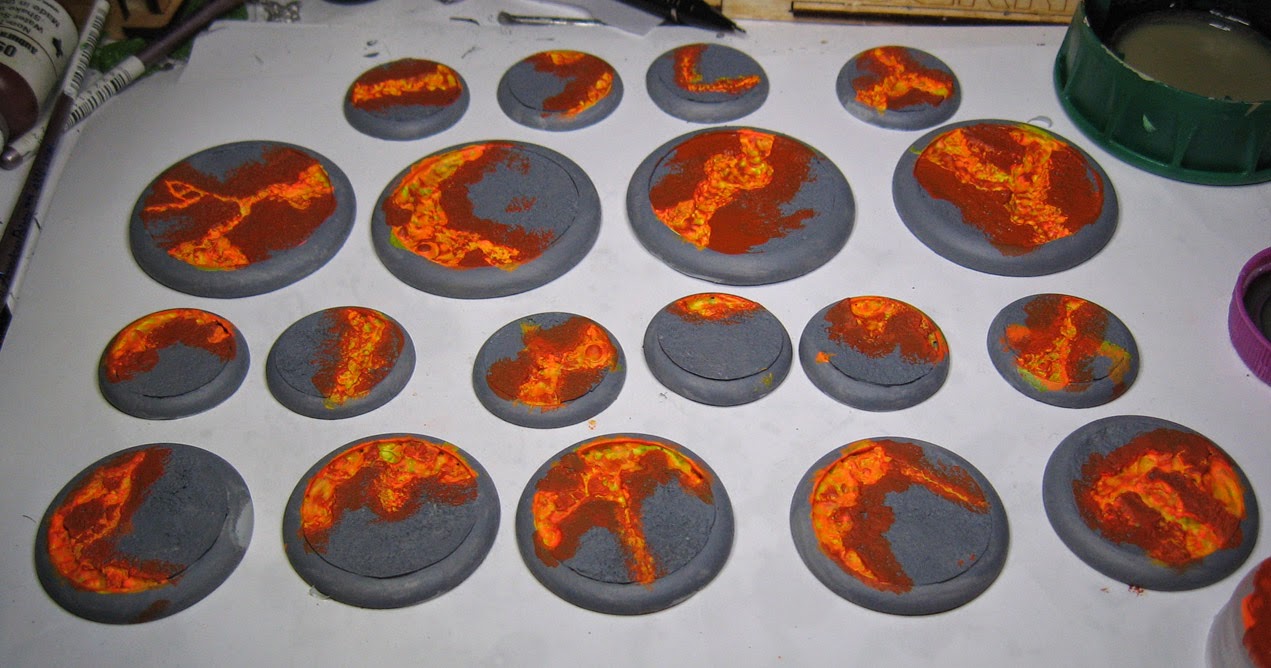 The darker these subsequent layers get, the brighter the original layers become.

This is done on all the bases... 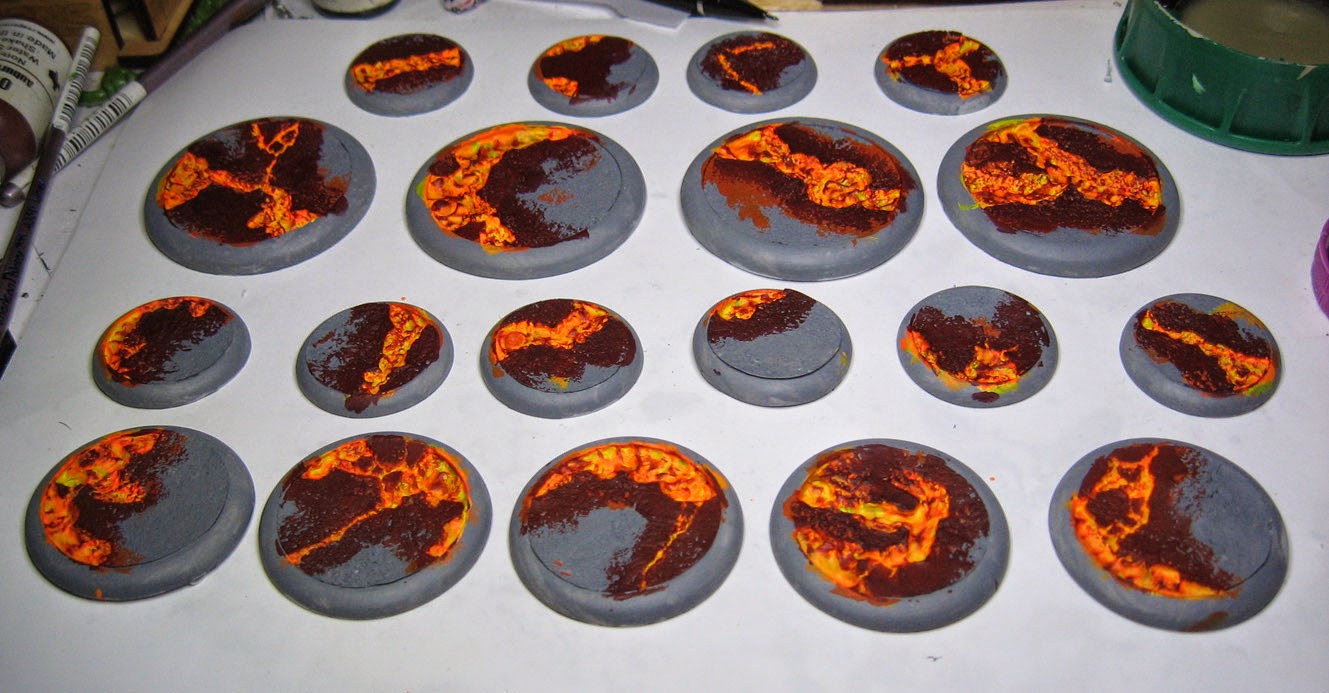 Until I begin to introduce pure black into the mix, but still with some of the deep red color included. 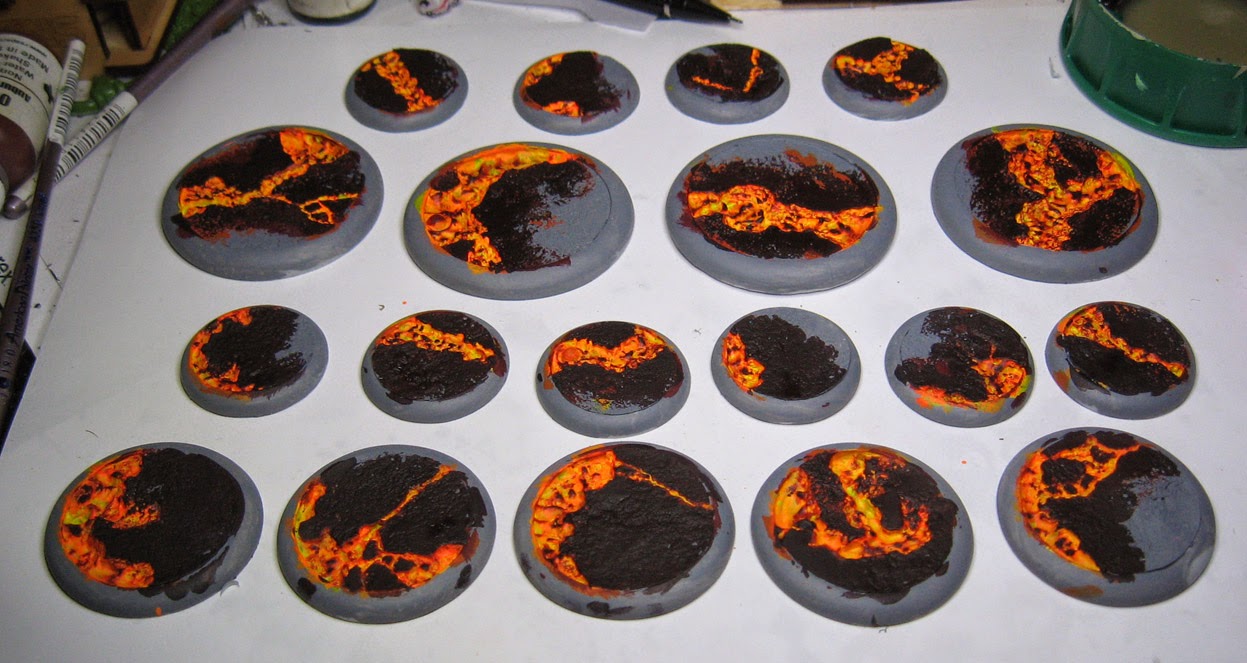 At this point, a straight application of the pure black is done around the base lip and other selected areas.  The final stages will involve making these parts look more like cooled ash.  More neutral (and even cooler) grays will be added.  That will make the lava appear that much hotter, as we now have value contrast, warm vs cool contrast, and high saturation vs grayed down colors. 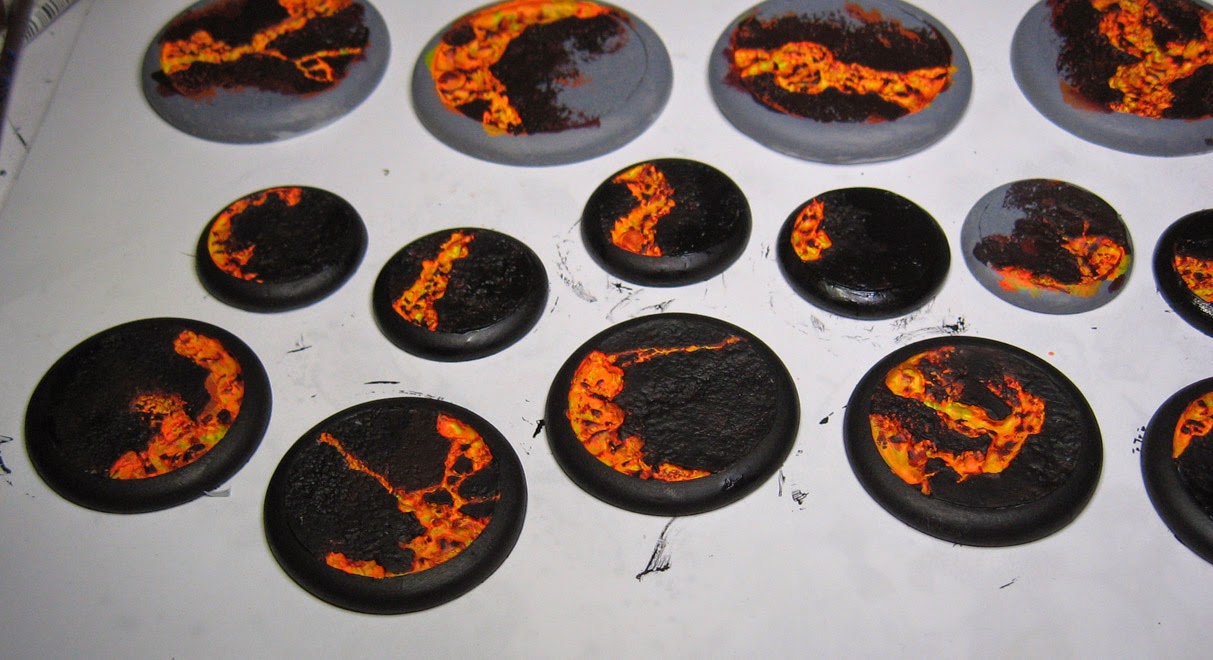 Posted by wappellious at 1:52 AM 8 comments: