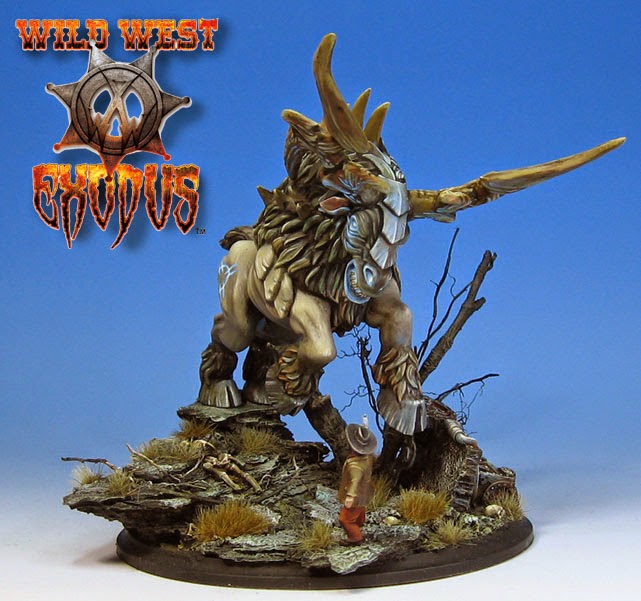 Well, you have seen the basing project, and even the first few stages of painting the Great Elk.  Now you get to see it all together!! 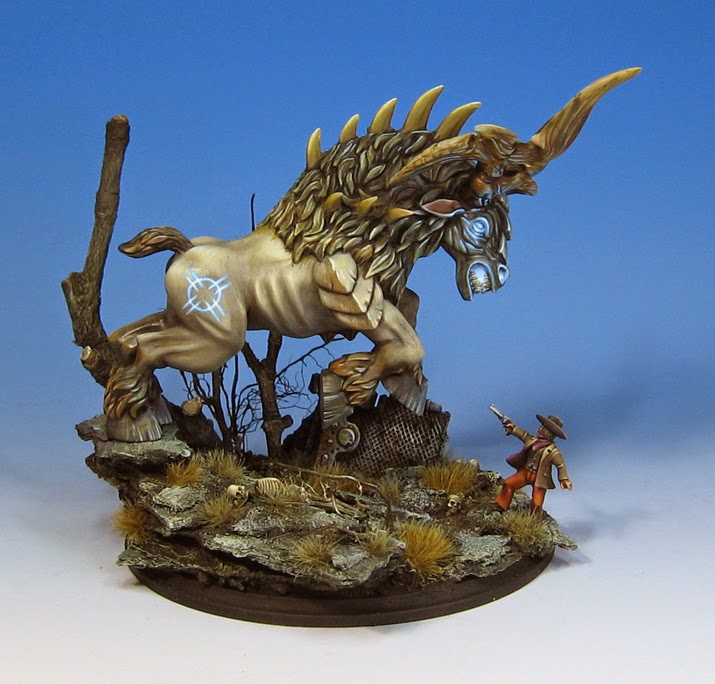 This is the Great Elk of the Warrior Nation, one of their heavy supports. 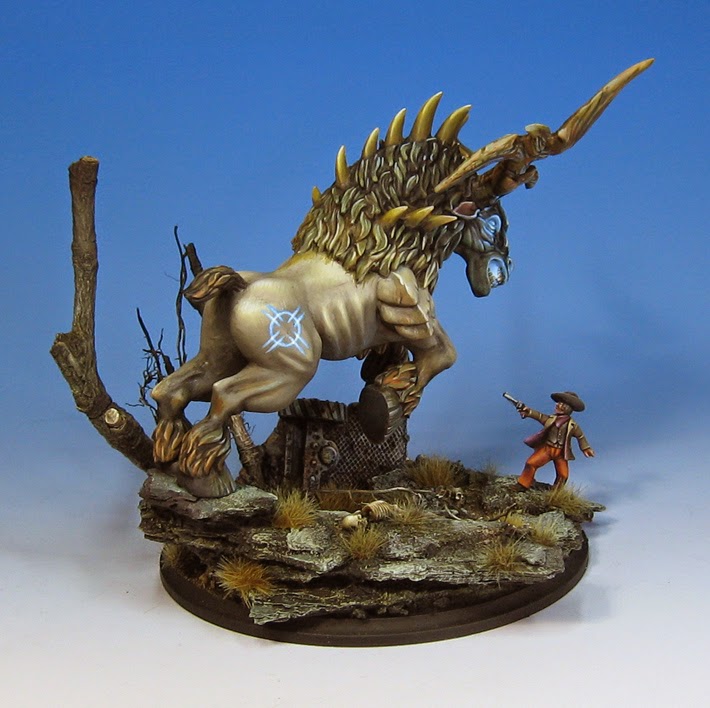 This is, as might imagine, a brutal monster, which has colossal hitting power and a 3 inch halo!  I'm certainly looking forward to that :-) 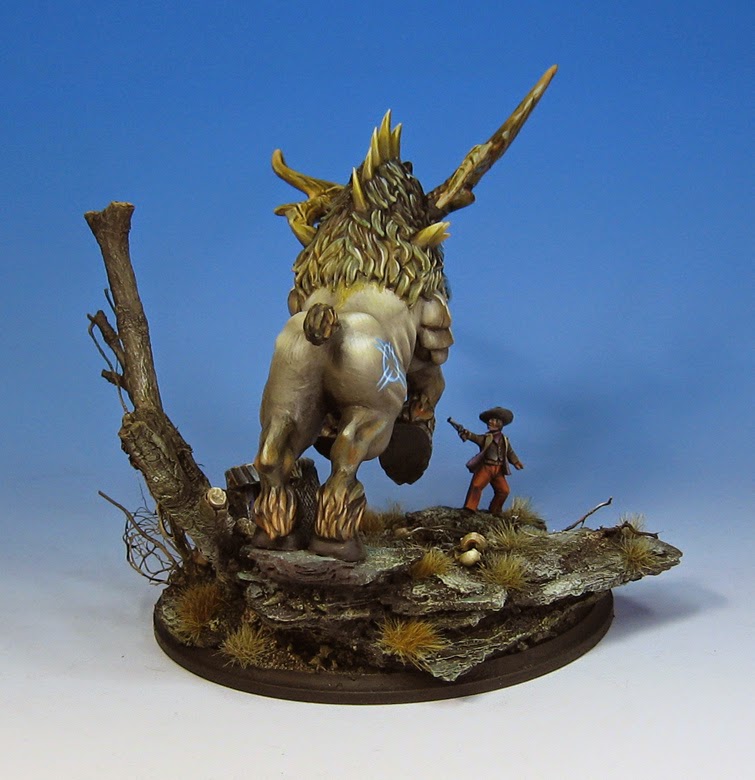 As gigantic as the base was, I never anticipated that the 'miniature' would make it look so small!  Wild! 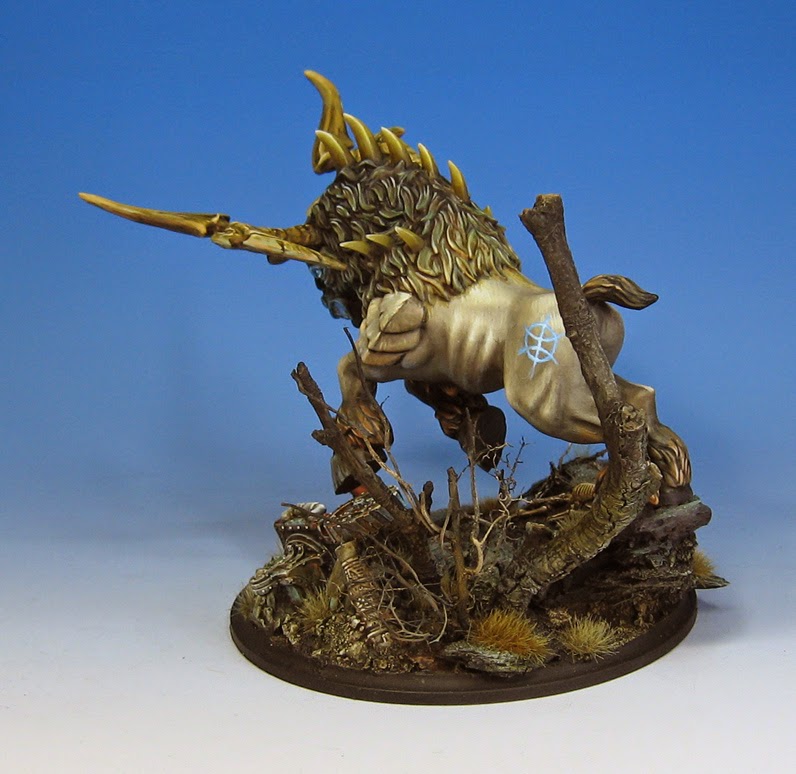 I am so glad that I chose to create this vignette with the ruined Fire Bringer and the hapless gunslinger.  I don't think he's got enough RJ-1027 in that pistol to do much harm before he gets flattened by Stompy! 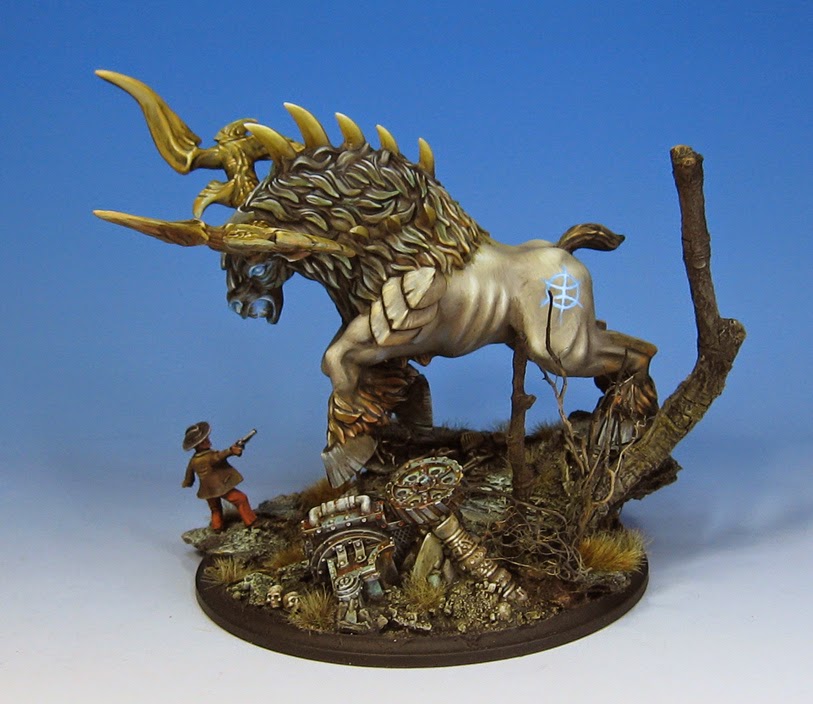 I have played with a number of vehicles in my previous armies, and even some monsters (Lizardmen and Tomb Kings), but they pale in comparison to this beast. 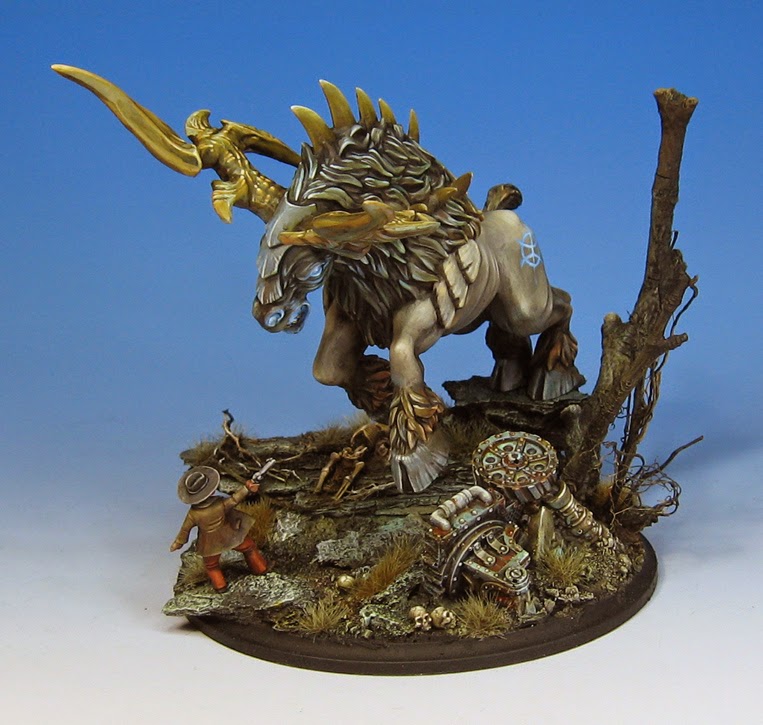 Stompy will also be my entry in the Crystal Brush, intended for the Fantasy/Steampunk large creature category.  I'm hoping that he does not have to go in the open category. 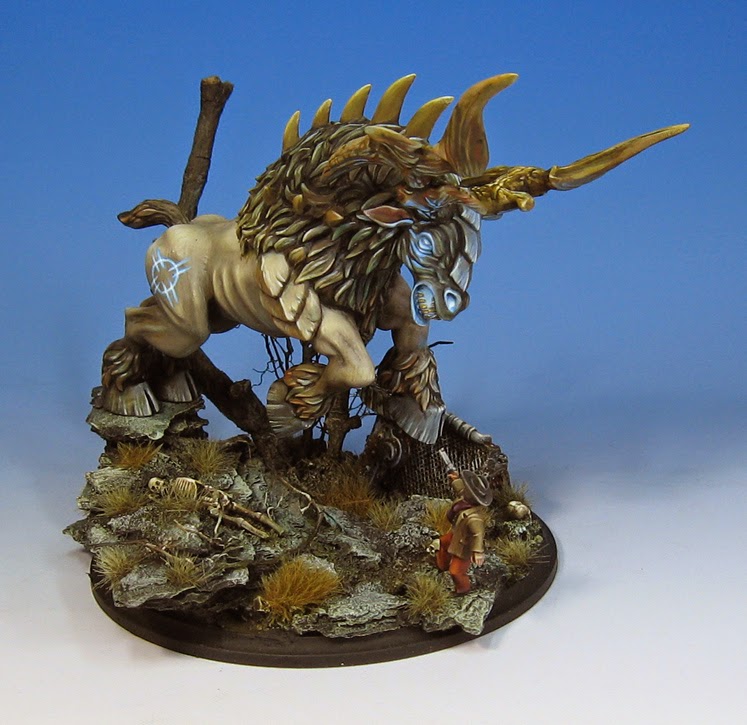 This looks so fun from just about any angle, it made all the hours of work on the base worthwhile.  I really tried hard to position it to get the best visuals, but also keep it as "out of the way" as possible for when we are playing games. 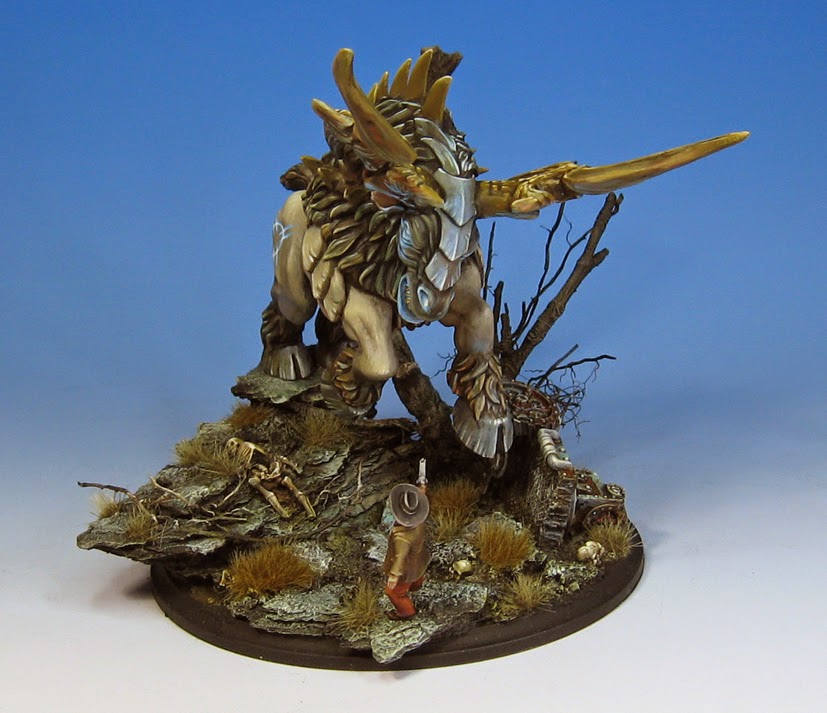 So, when you see him up for the voting process at some point, you will have a pretty good idea of what went into making this thing a reality.  Stay tuned for much more!!! 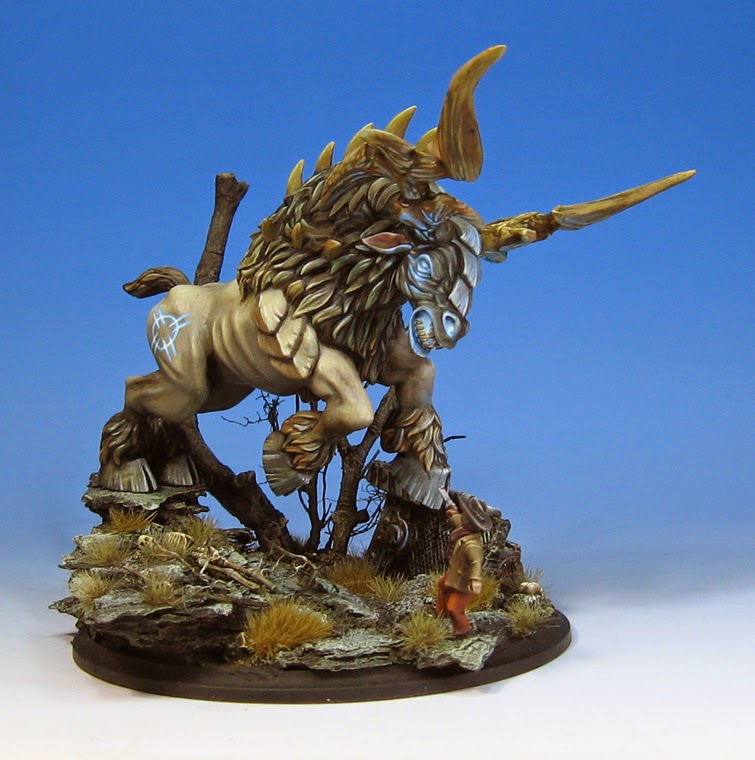 Second helpings on the base 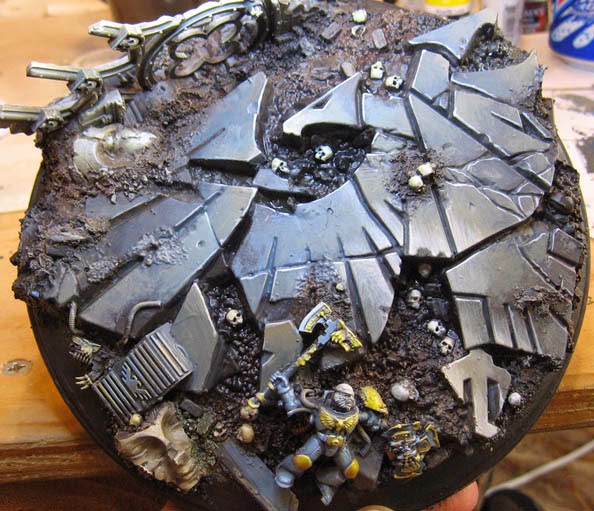 Rapid fire progress continues on the base.  As you can tell by the glistening paint, I have been able to work fast enough so that the paint can be pushed around on the surface and mixed together. 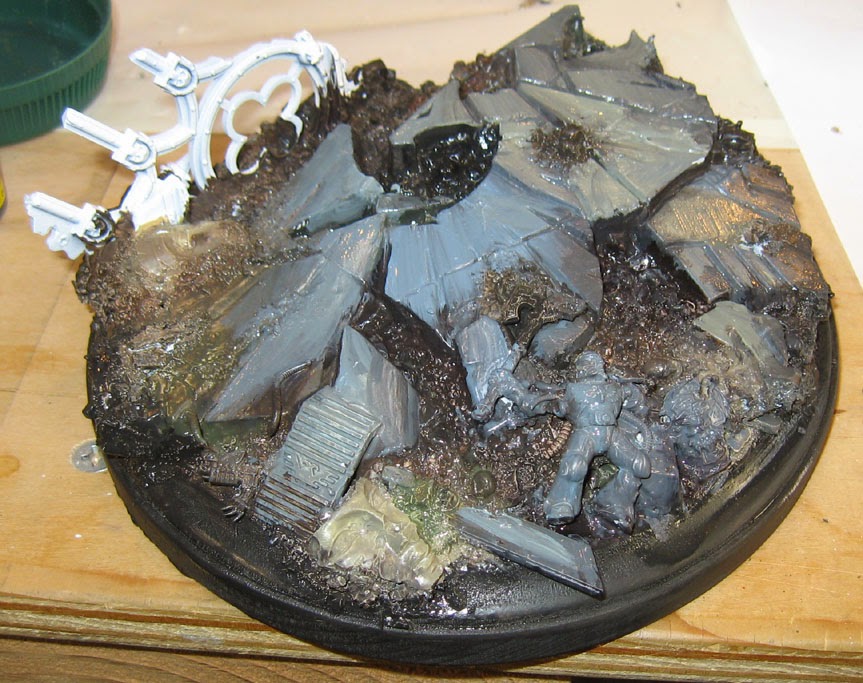 Just as I did when painting in the darker colors, the light colors are varied.  In some places, I used more of a warm grayish green, while in others I went with a blue gray. 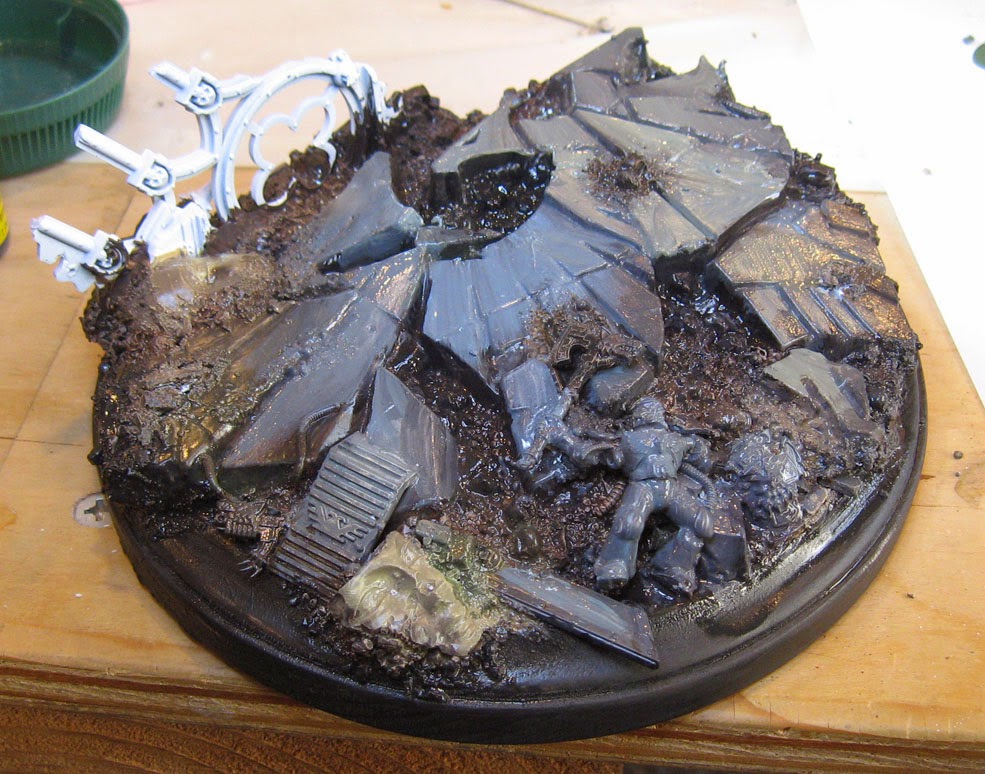 This provides additional contrast to the usual light vs dark contrast. 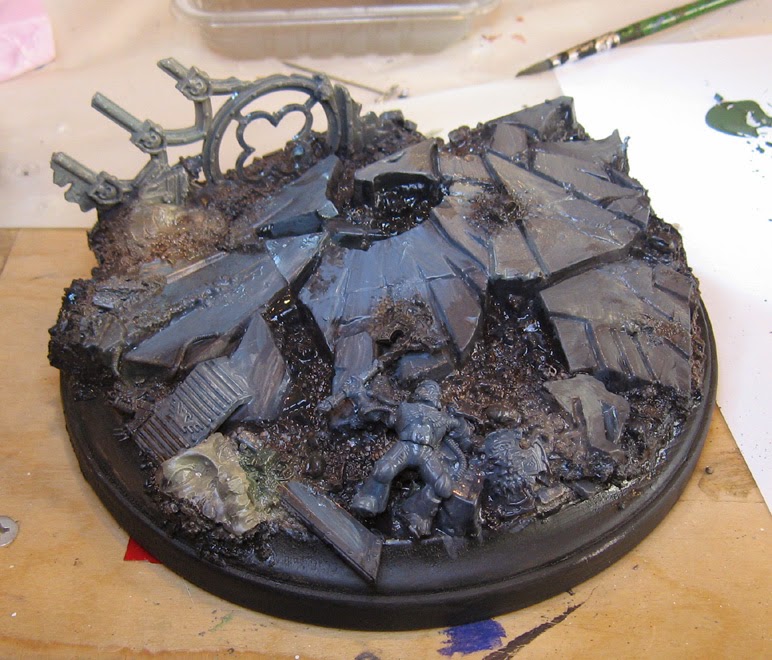 When you do that, you can generate a lot more interest and depth across a large, complex surface which will have a relatively limited palette. 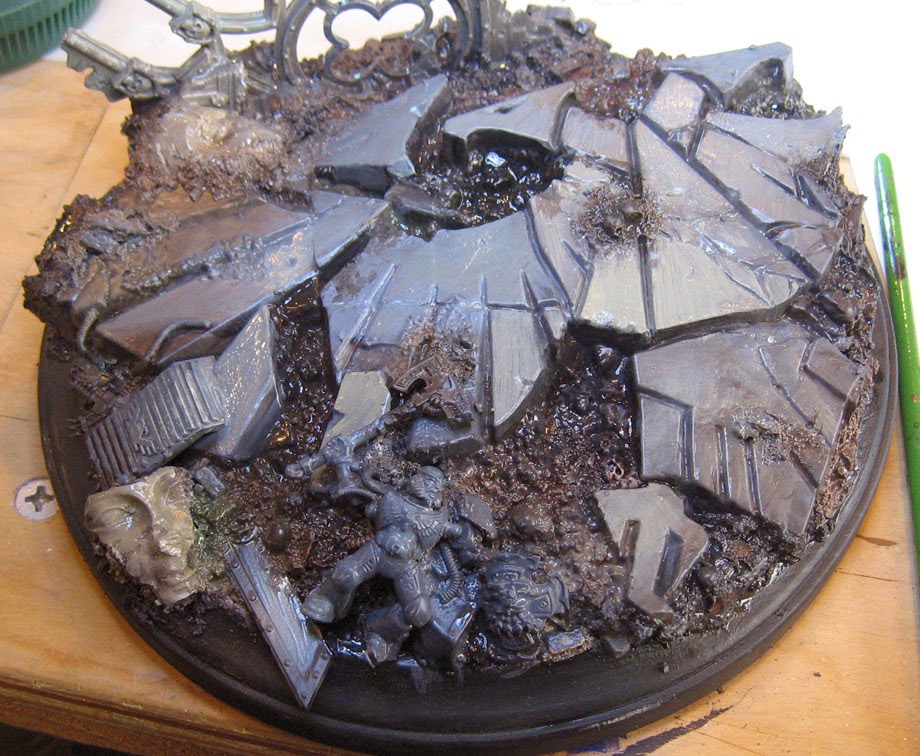 This view gives you a decent idea of what I have been attempting to do.  In some areas there is much more contrast... while in others there is very little.

Doing so makes life much easier on the viewer, as I let one or two things catch their eye and draw them in closer.  A better approach then punching them in the face with a blizzard of things that they 'must' look at immediately. 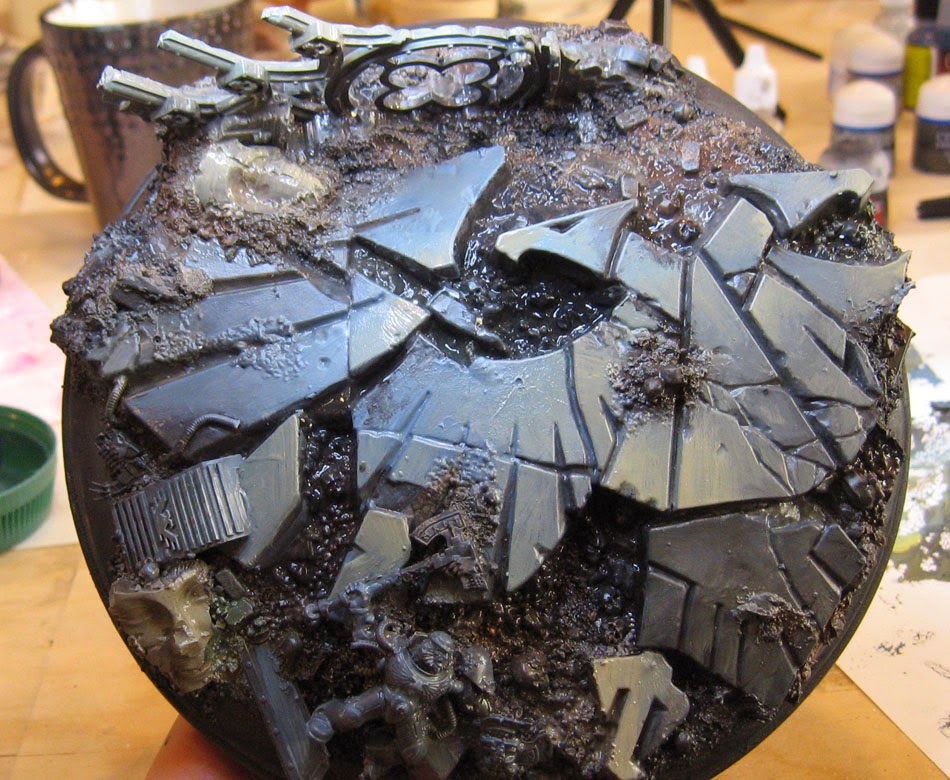 At this point, I am also working a bit slower.  Instead of constant wet blending, I am using more of a 'scumbling' technique shown here.

The idea is to press the somewhat drier brush into the surface.  It will create a tiny bit of texture, which will be handy when trying to give the impression of stone... 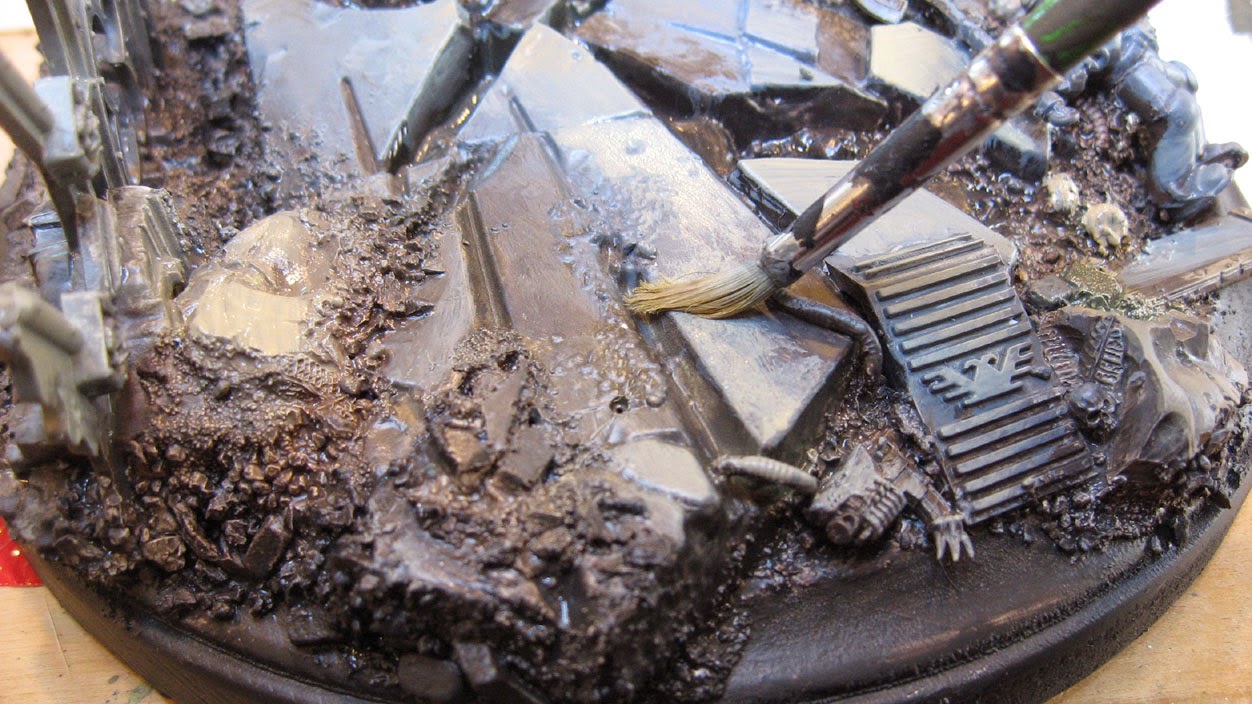 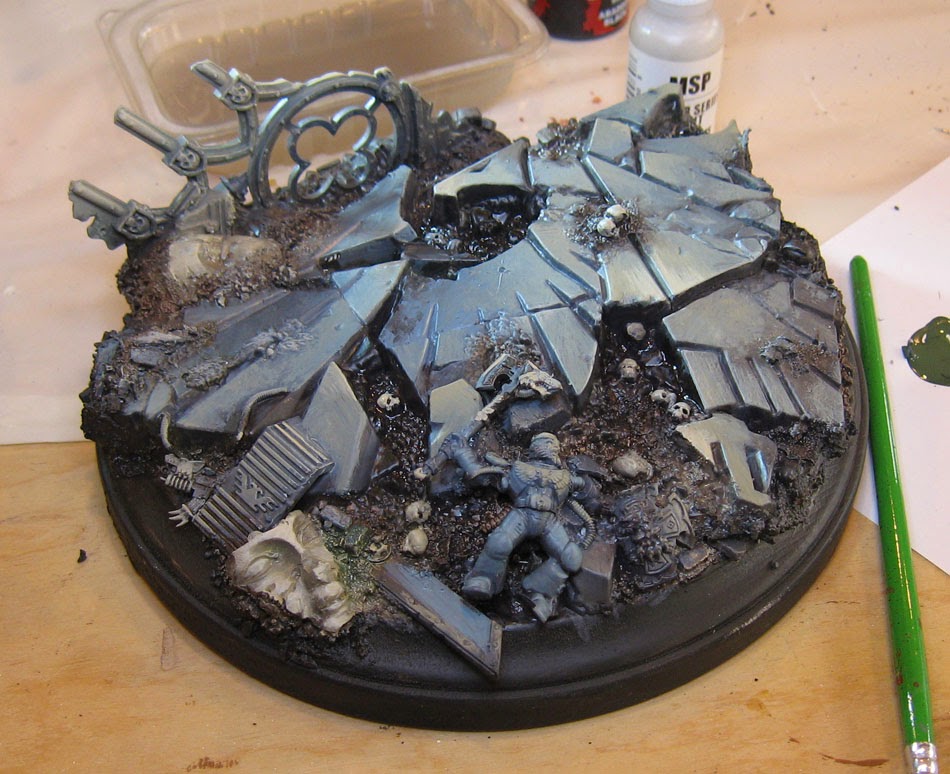 Some of the other pieces on the base are getting colors that are even warmer, such as the statue heads.  Those are tans and reddish browns, just to let them separate from the main stone pieces. 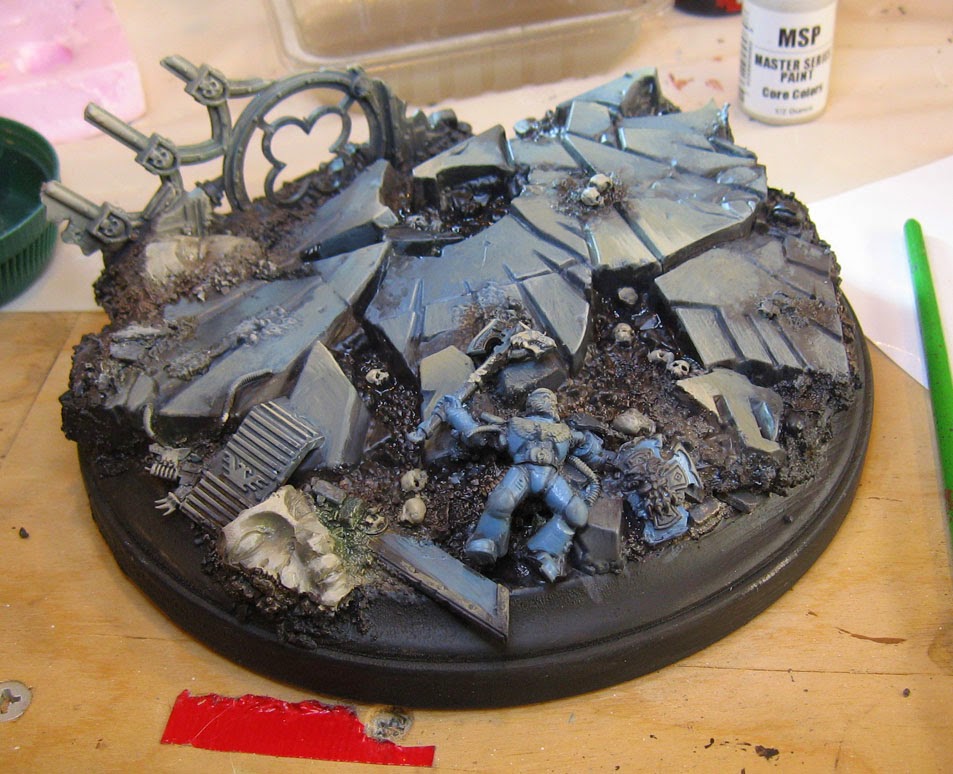 One of the last things I did during the Shaded Basecoat phase of the base was to paint the casualty. 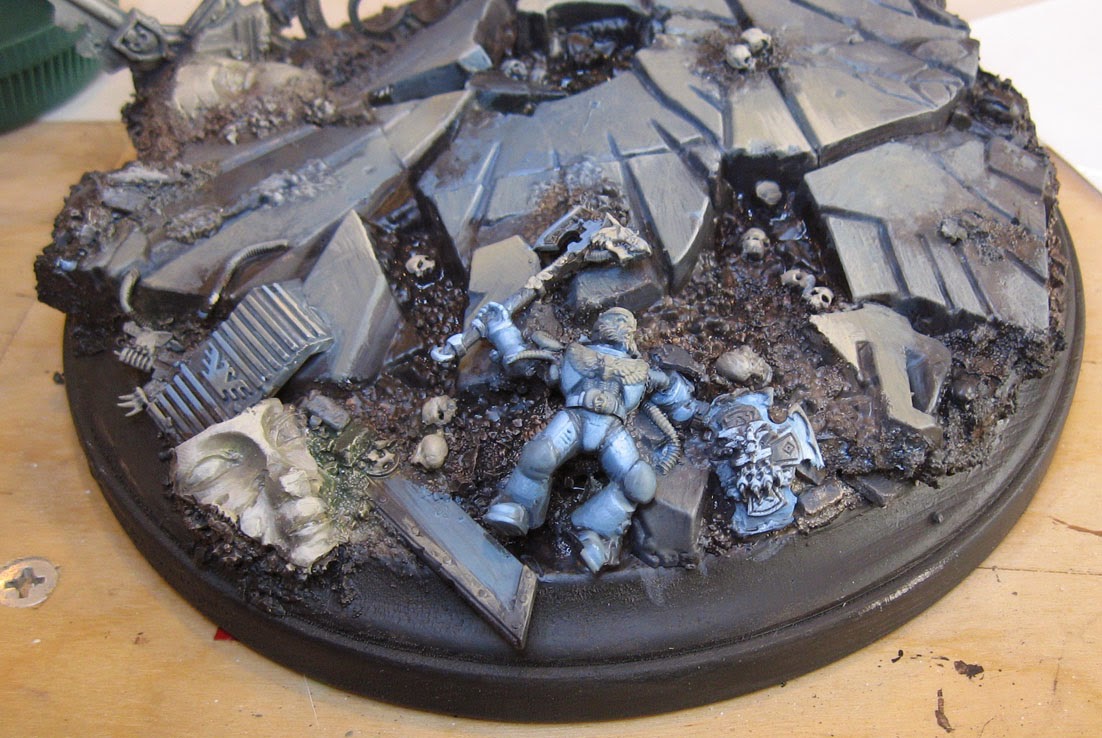 A little bit of yellow was added to the casualty.  A touch of yellow, as he's a Space Wolf.  Still, this has to be a toned down yellow, so as not to create too much of a distraction.

Some yellow will be used on the Angelic figure, which will help to spread that around. 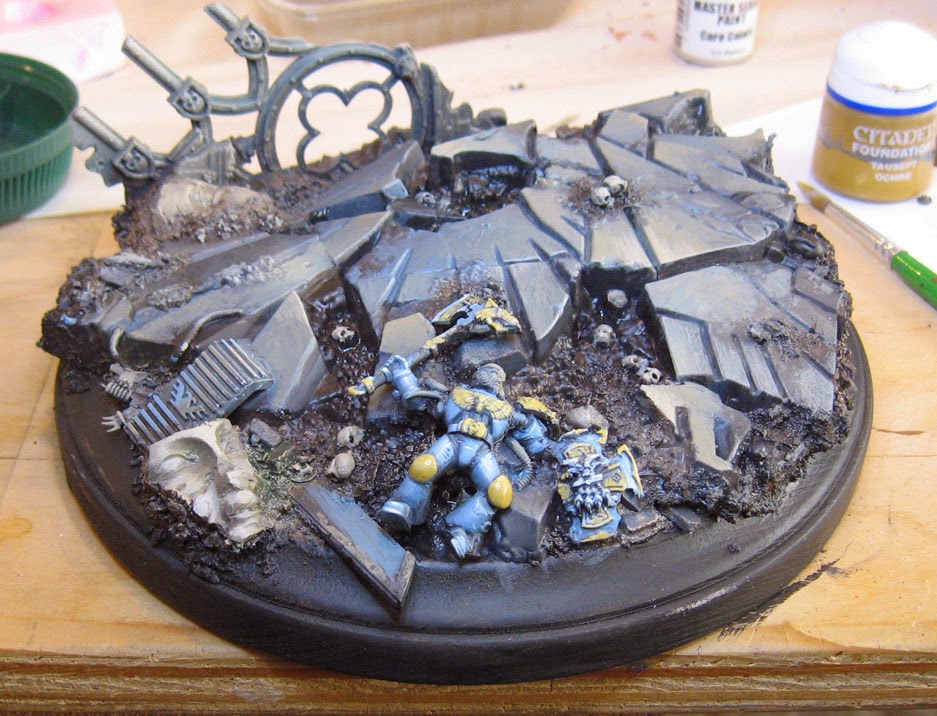 He's just about ready to go, so I moved on to the broken wall segment. 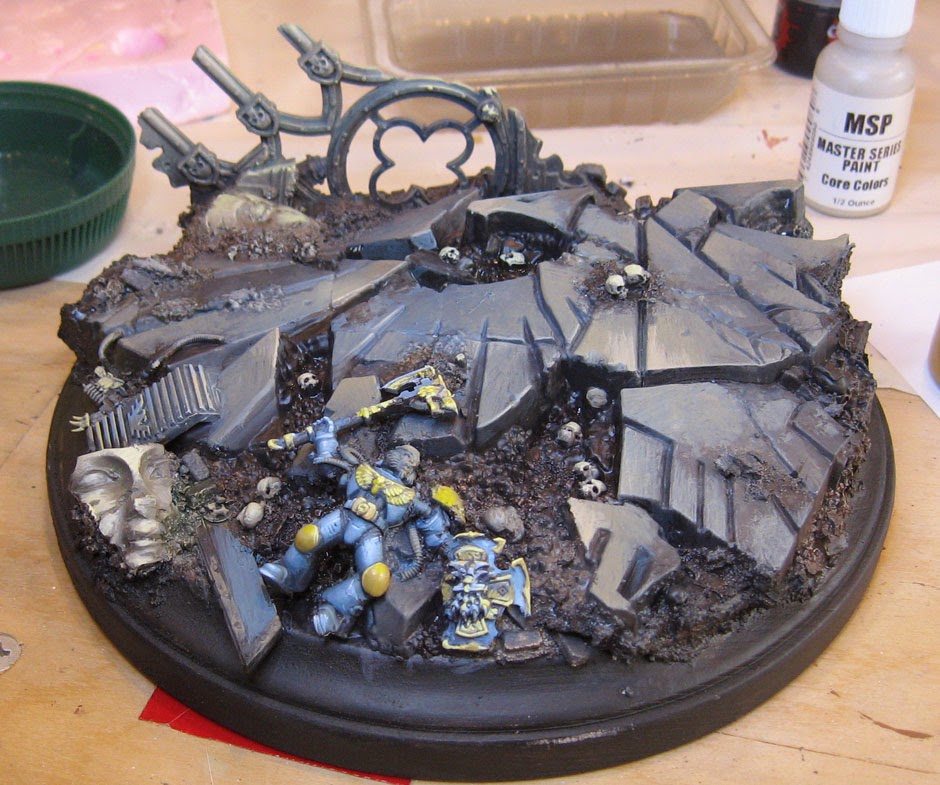 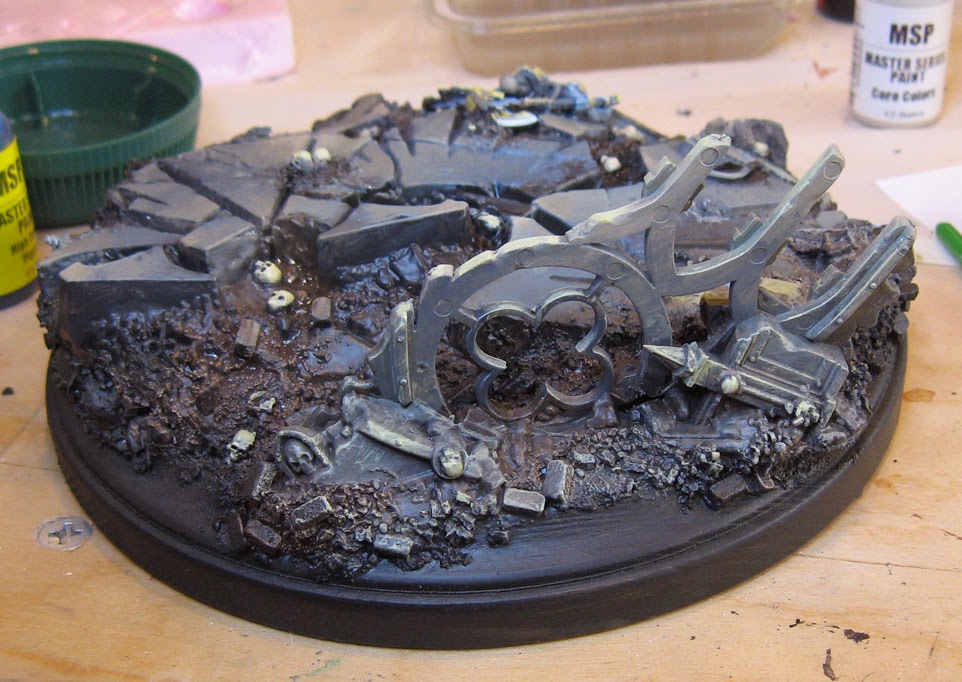 The broken wall was painted a bit lighter in some places, forcing the highlights on the upper surfaces.  The vertical pieces need to be more in shadow, so it creates more of a silhouette impression when the figures are placed on the finished base. 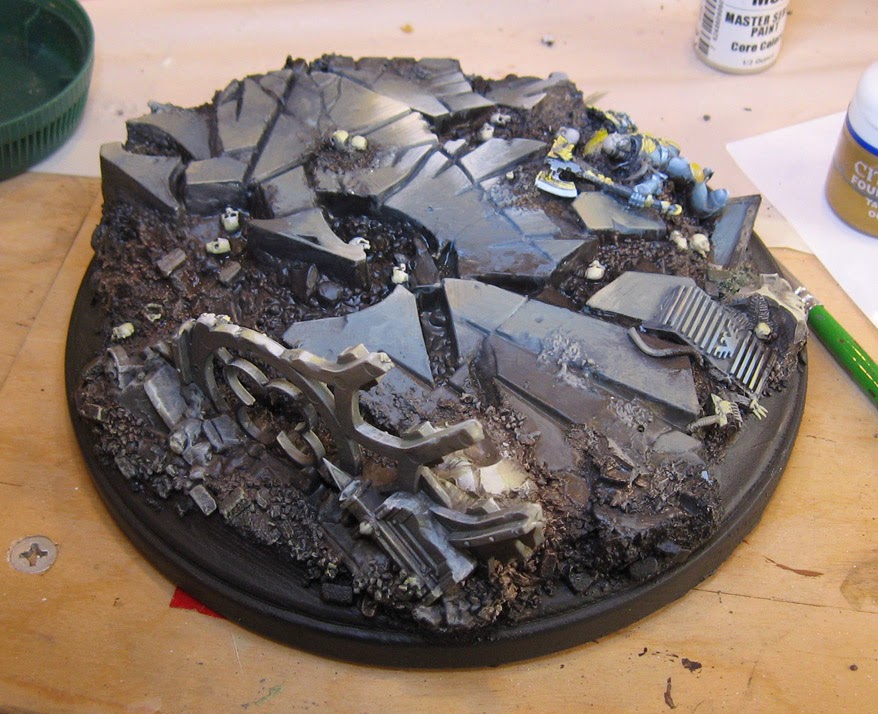 Just about set!  Only one more piece which I almost forgot about... 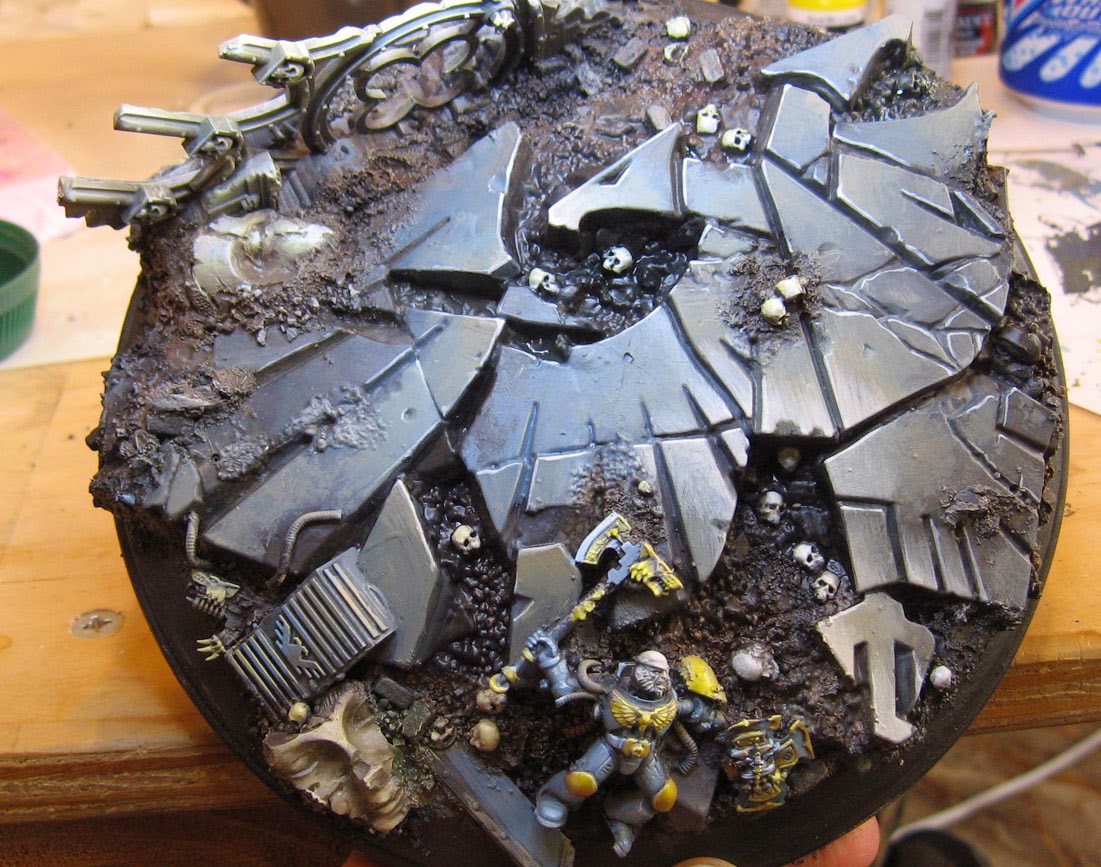 One wee little helmet painted, so now it's on to some glazing!!! 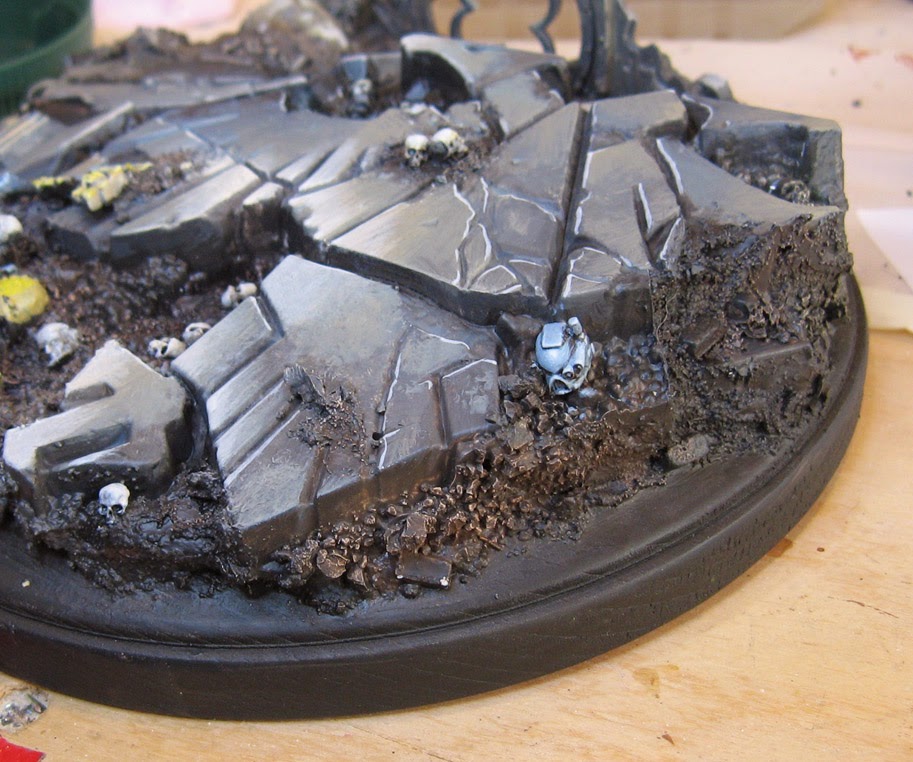 Posted by wappellious at 1:02 AM 6 comments: