Get on your high horse... some goblins from Gamezone 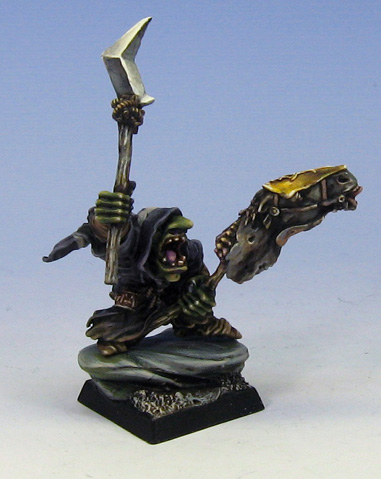 If you were looking for some fun goblins that are different from the usual fare, check out these guys from Gamezone.  The 'hobby horse' goblin is one of my favorites :-) 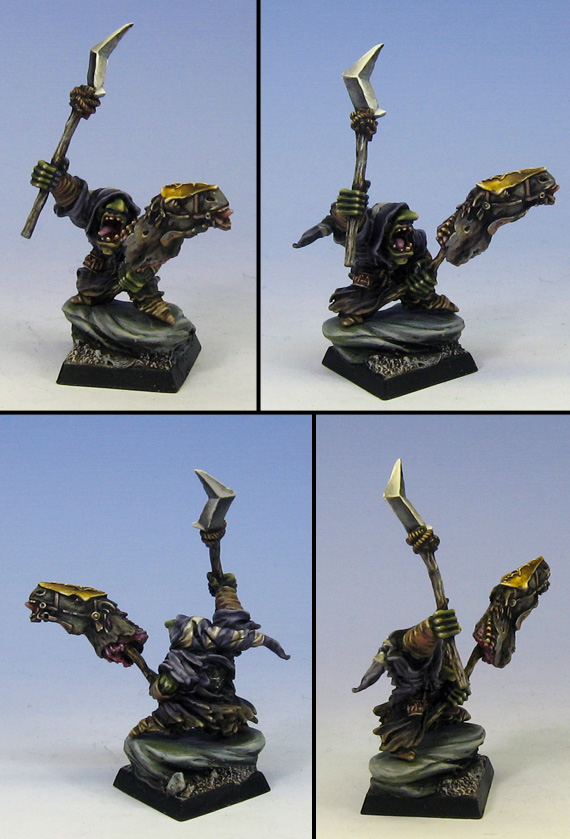 There are a few more of these goblins that are even more hilarious, so I will post those later! 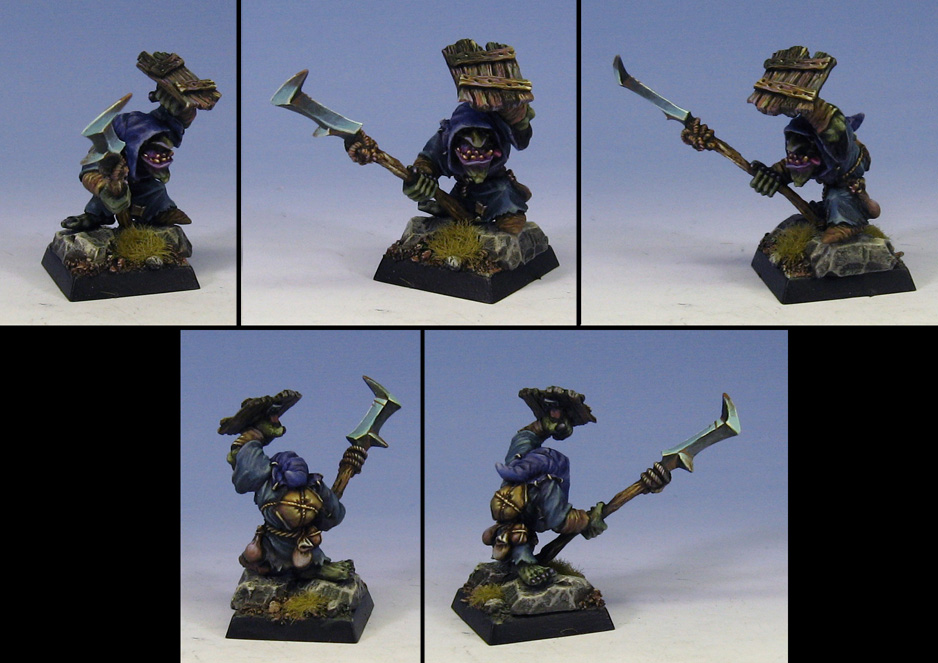 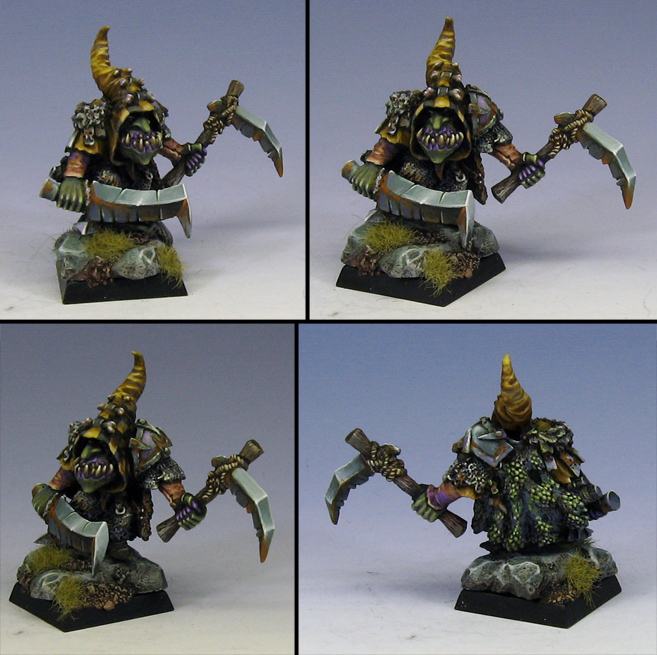 Who's afraid of those little gobbos?  You should be... 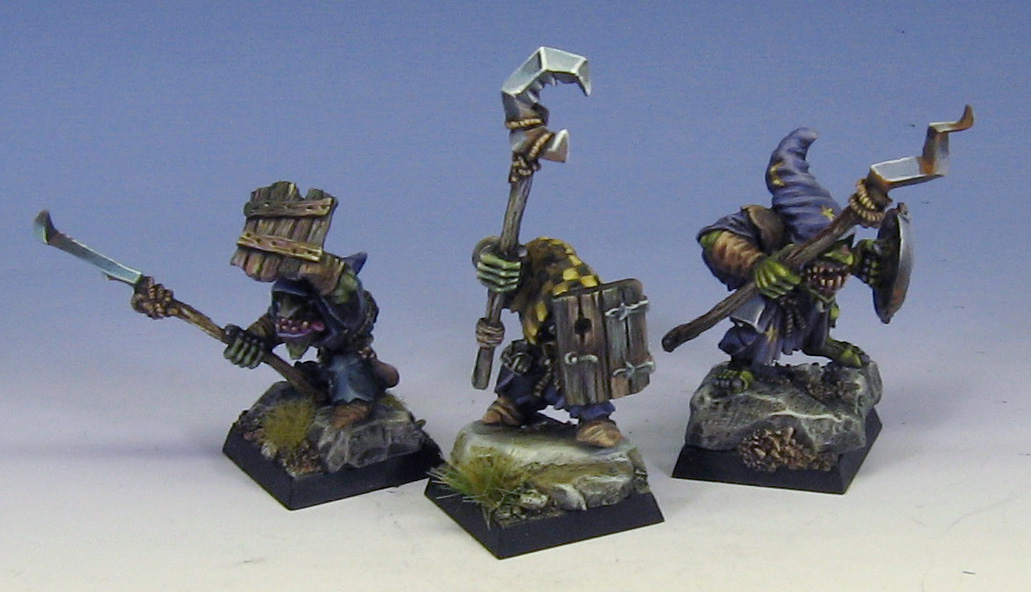 Posted by wappellious at 6:05 PM 3 comments:

Some more WIP images of the Imperial Fists terminators 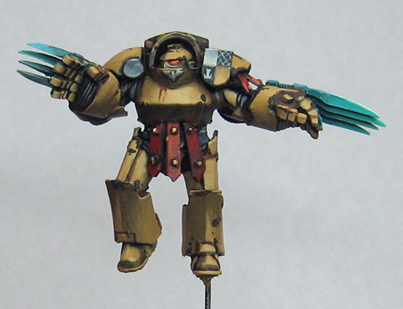 Here are some shots from a few days ago of the Imperial Fists terminators!  As those of you who saw the first post know, I have been working my way towards the point where I could do some weathering.

This would make them match the previous figures, and also help with some of the casting and sculpting 'anomalies' on these guys :-)

In this set of images, I am working my way up through the yellow, getting lighter as I go... 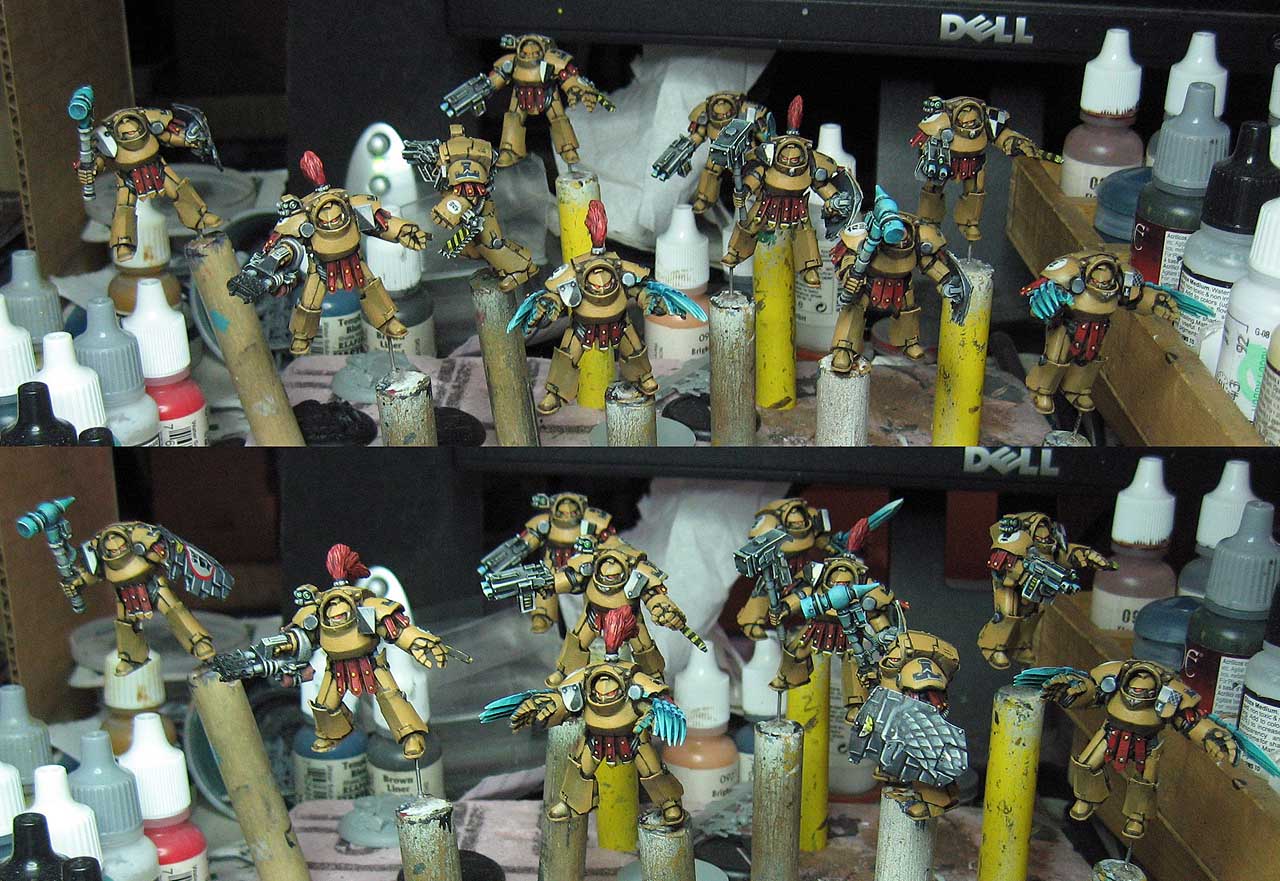 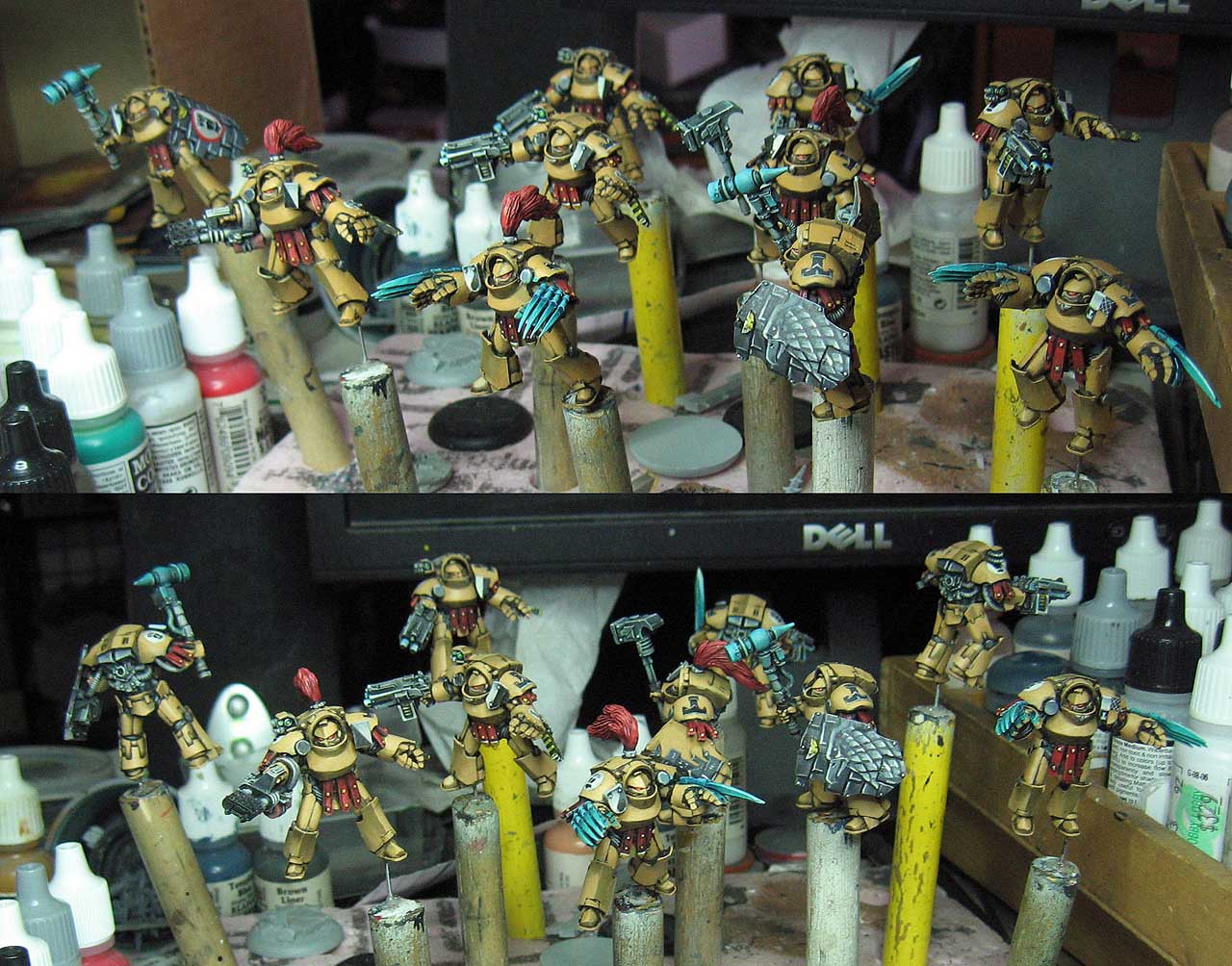 Just about ready for some battle damage and rust!  I have not done my lightest colors yet, as I want to see where my weathering effects take me first.

Mixed some black and brown together, and began placing chipped paint areas on each of the figures.  My primary targets were areas that would most logically be chipped, such as corners or other more exposed surfaces.  These initial patterns were more broad and rough.

Later on I will add some very tiny dots with a fine brush.  That happens after my final highlights on the yellow. 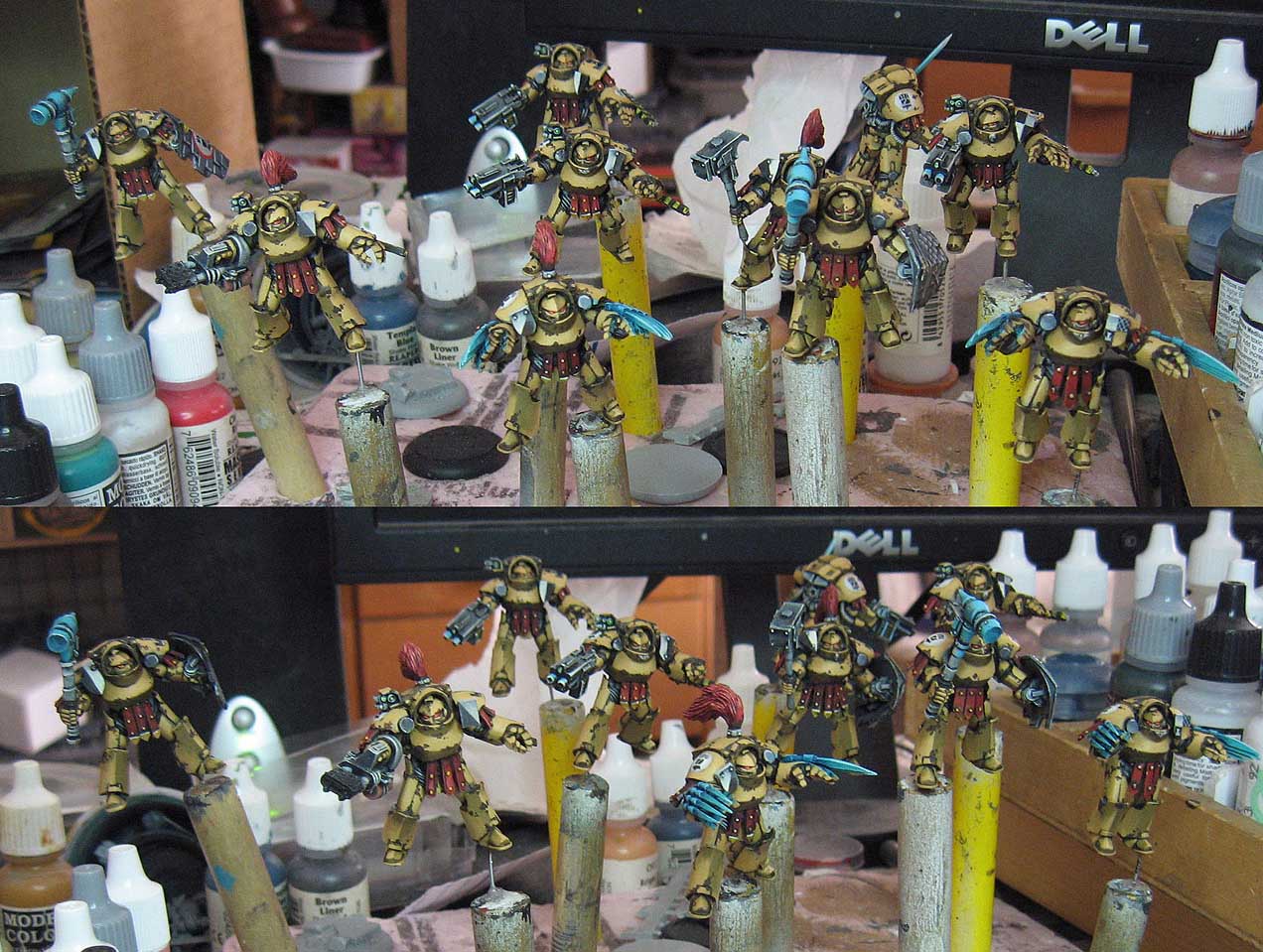 Once the paint chip patterns had been created, it was time for some rust.  Loyal Wappellians know that I typically start out with GW Calthan Brown, and old foundation paint.

When you water it down, the pigment begins to separate, which is what I want!  This becomes a very interesting opaque glaze as a result! 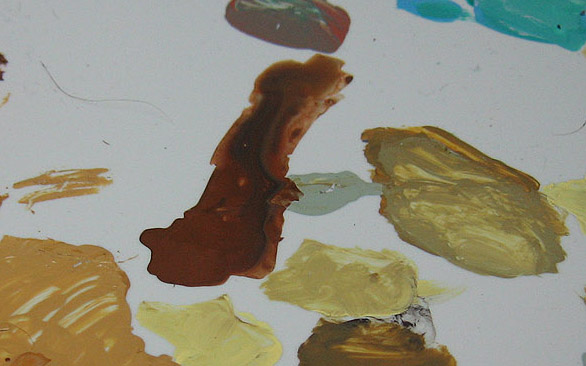 Using one of my "distressed" liner brushes, I start creating rust streaks, or allow the 'glaze' to sink down into crevices like the joints, etc.  Where some of the casting was less than spectacular, that is where I will do lots of battle damage and rust.  As it was, I had to do some significant re-sculpting on parts of these guys... 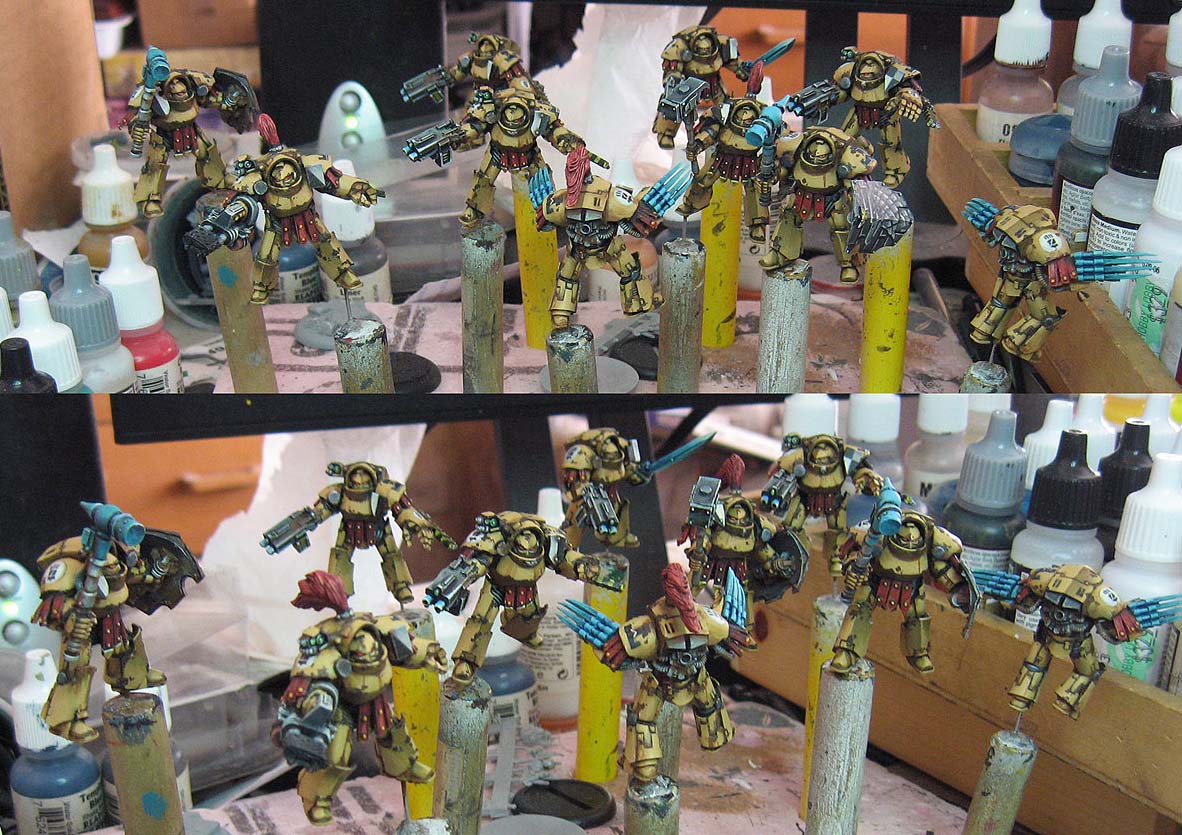 You can get a better idea of what I am talking about by checking out this picture.  You can see the streaks, and some of the paint chips.  In my next stage, I did some highlighting on those same chips to give them a bit of dimension. 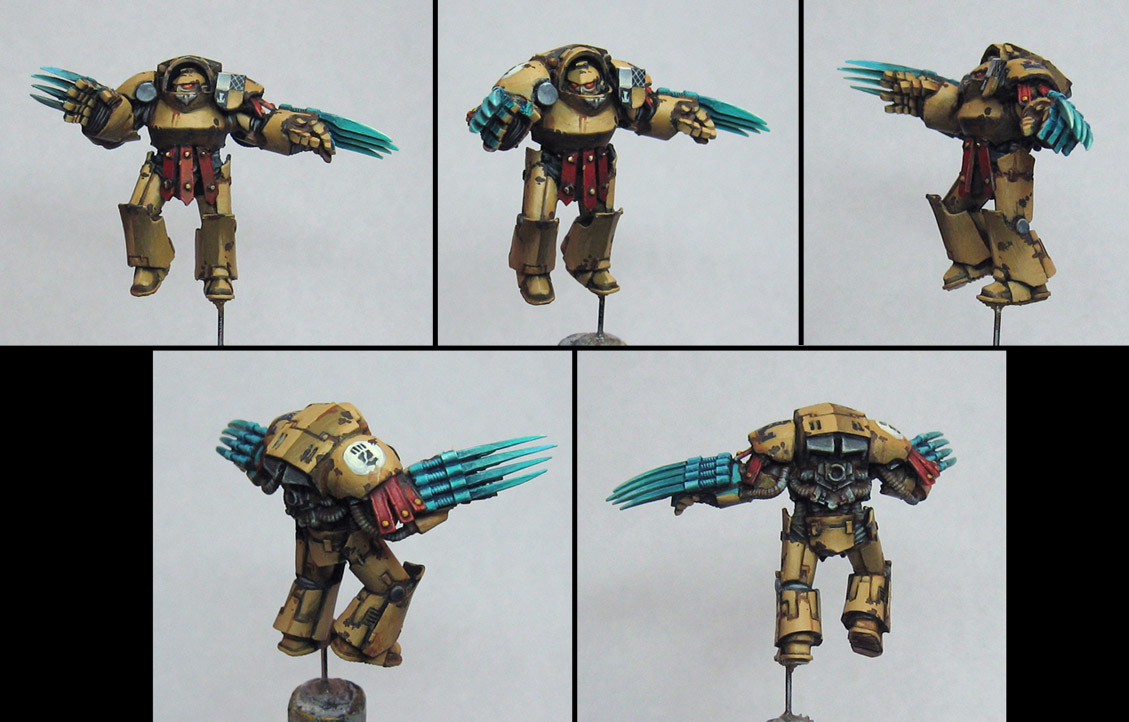 Weathering is one of the new painting videos I want to add to the kickstarter.  That is listed as part of my next stretch goal!!! 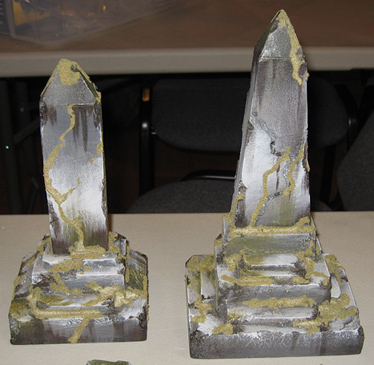 Here you can see the whole  batch, not long after some flock was applied. 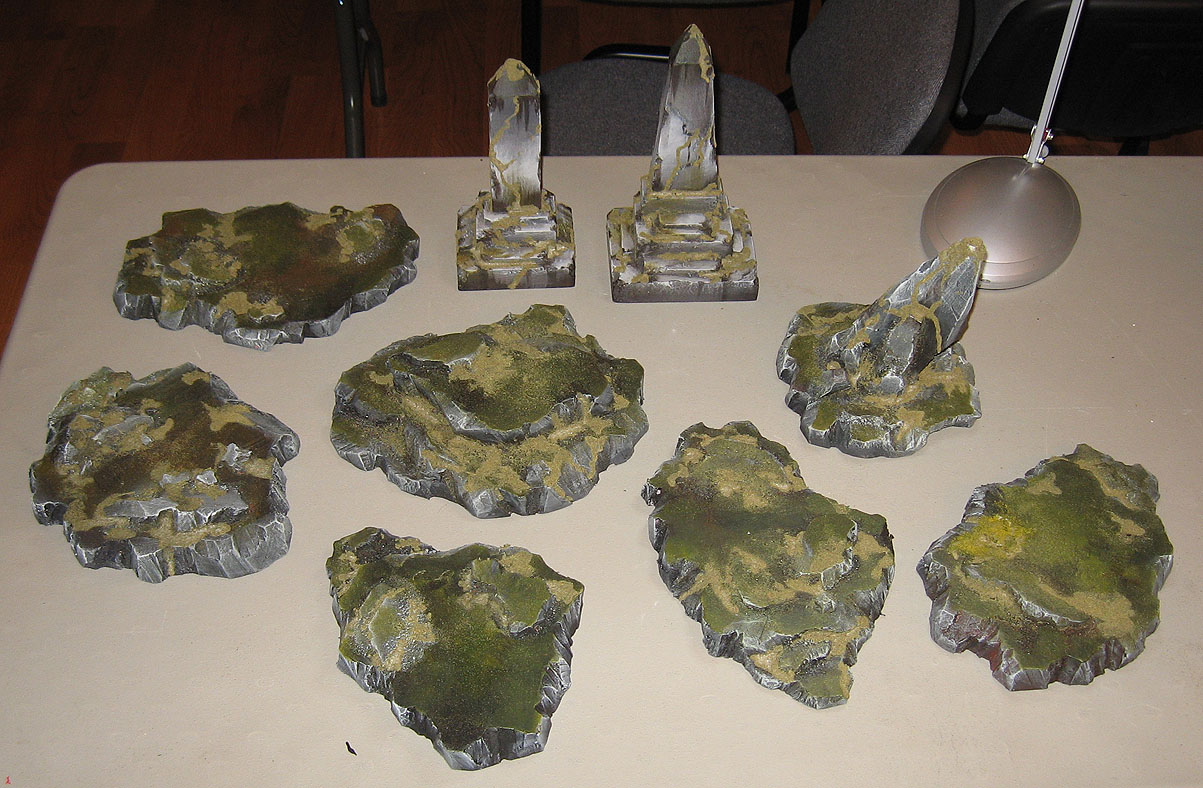 Hills and rocks, and a few monuments 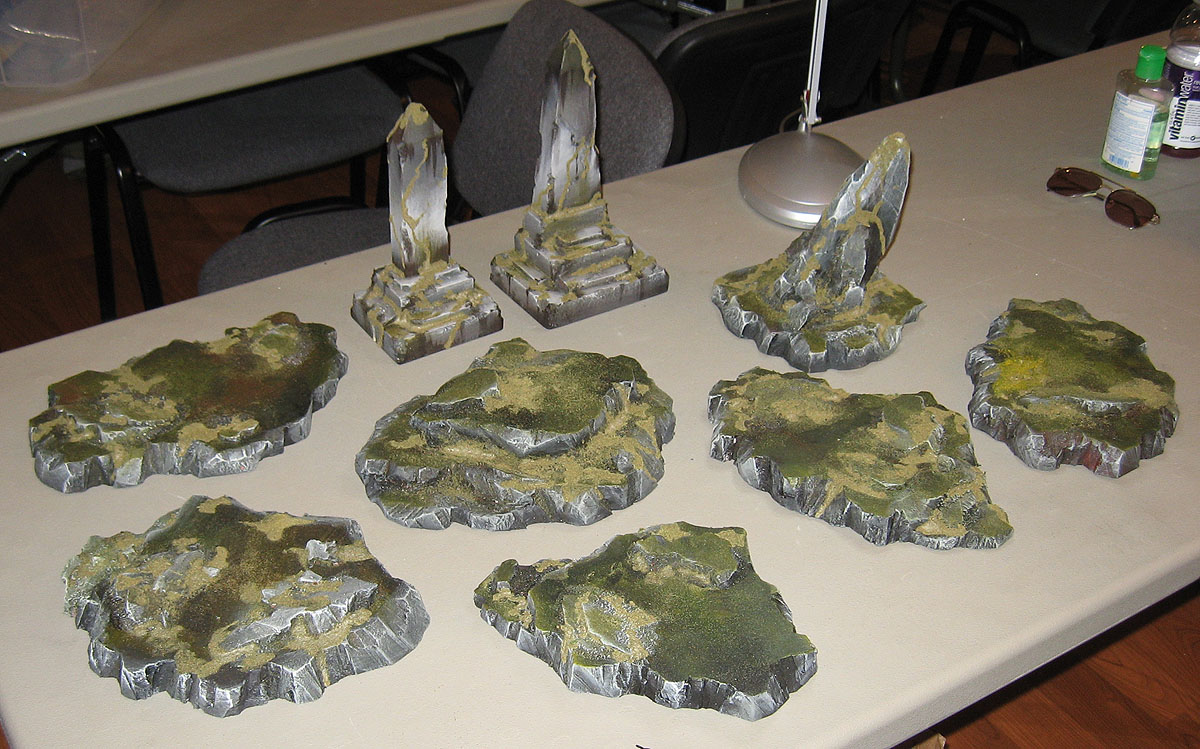 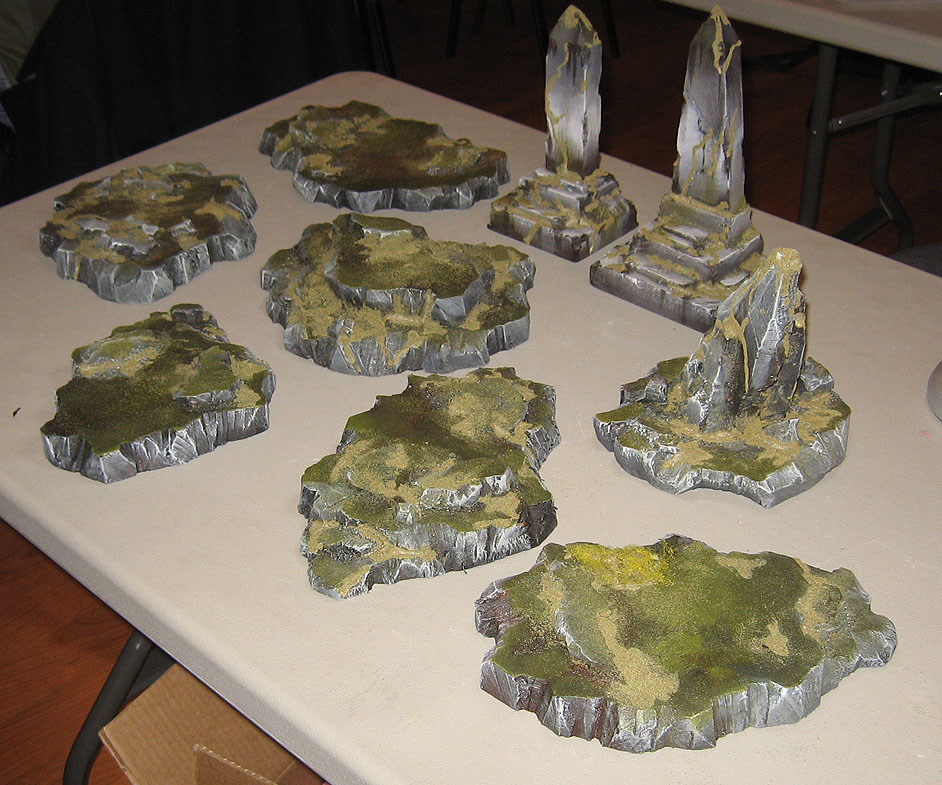 I love making these standing stones, since they use 'junk' pieces of foam that you would normally chuck in the garbage!!! 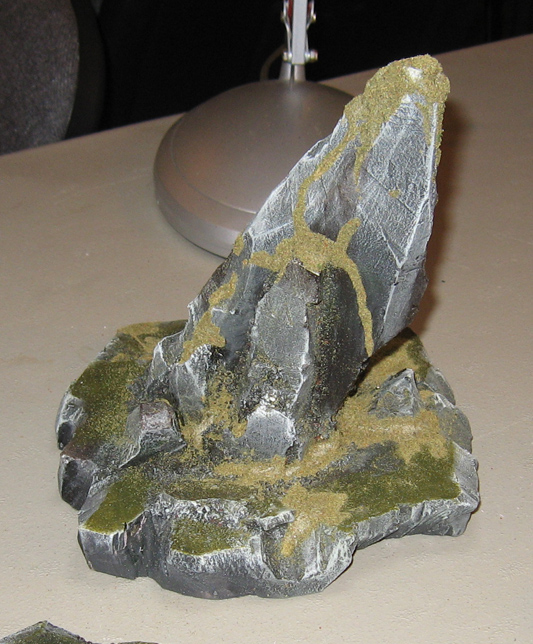 Here's the standing stones and the monuments together... 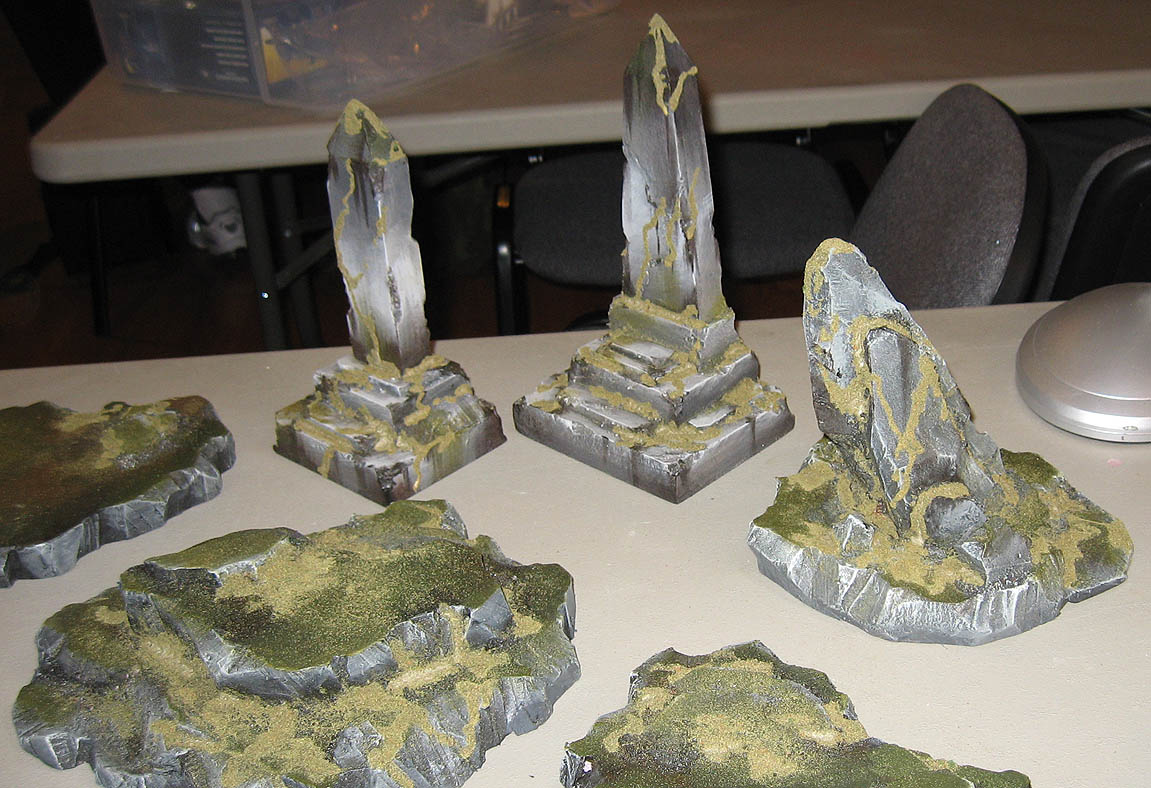 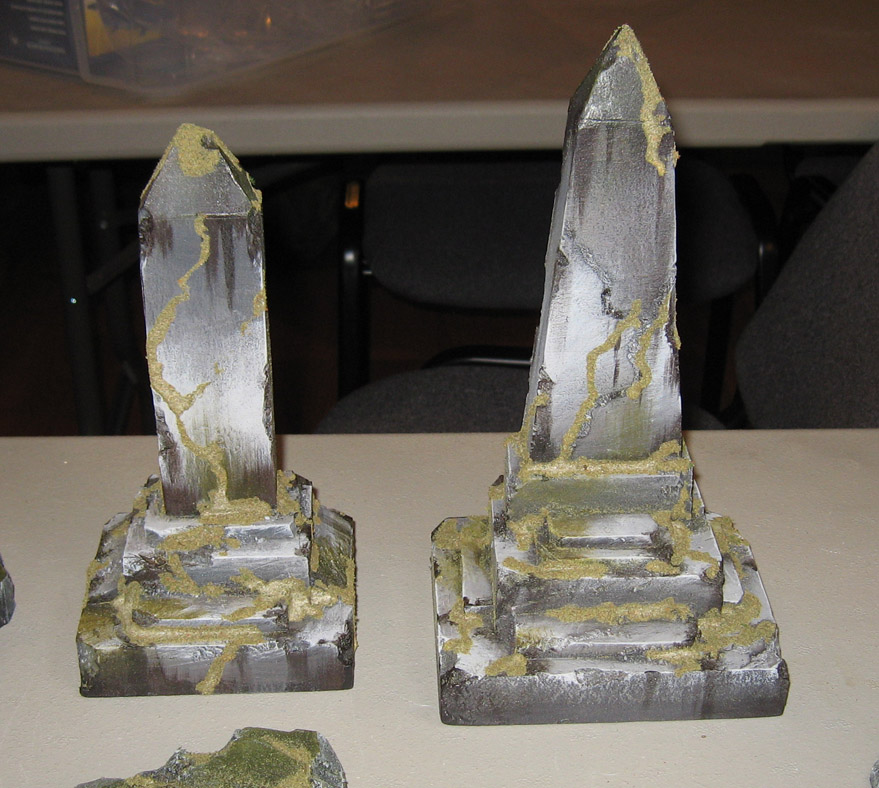 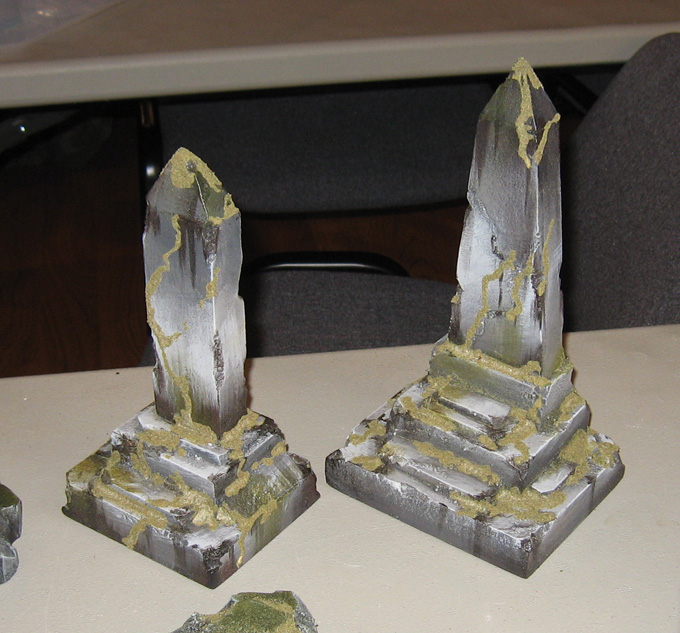 Kevin and I had a great chat about how certain principles of composition were applied to the making of these terrain pieces.  For instance, there is a variation on the 'edges' of the hills, as in hard and soft edges.  The soft edges let you easily walk up the hill, while the 'hard' edges create dangerous cliffs!  These areas also have the highest light to dark contrast... just like a 2D painting...

This will all be part of the painting video kickstarter:
http://www.kickstarter.com/projects/891905985/discover-the-painting-pyramid-with-james-wappel


Posted by wappellious at 12:18 AM No comments: