Stand at your guns 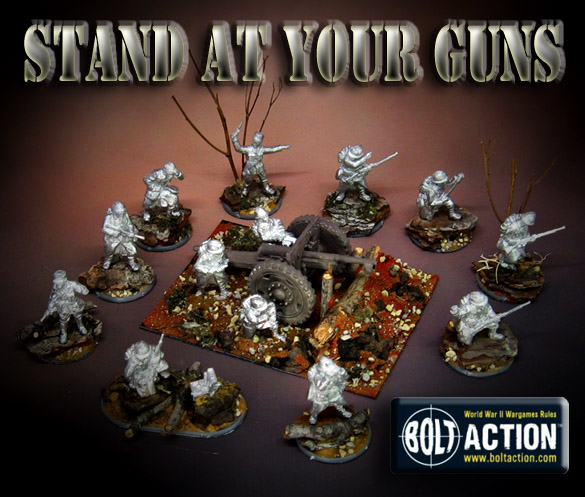 Here's a little peek at what some of the finished bases looked like before primer painting!

First, the command groups.  I don't know if I will go with more than 2 in a group from now on, or if I will use these as a way to get a few more LMG teams into the mix.  That 'small squad' rule and the fact that just two command figs could potentially ride along in a transport with a squad has its appeal also! 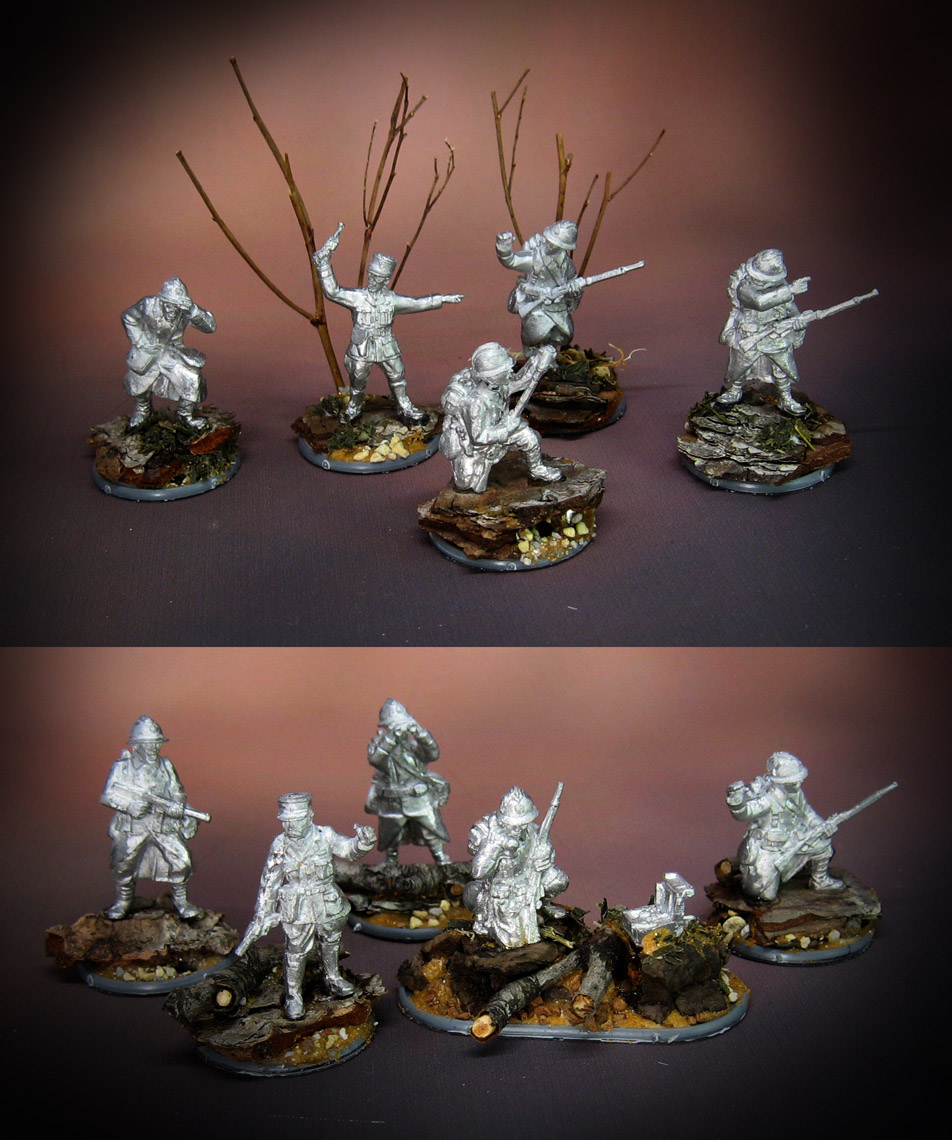 The +4 leadership for the Major proved to be a major way to save pinned squads.  Those were veteran squads too, so all the more benefit for babysitting those free inexperienced squads. 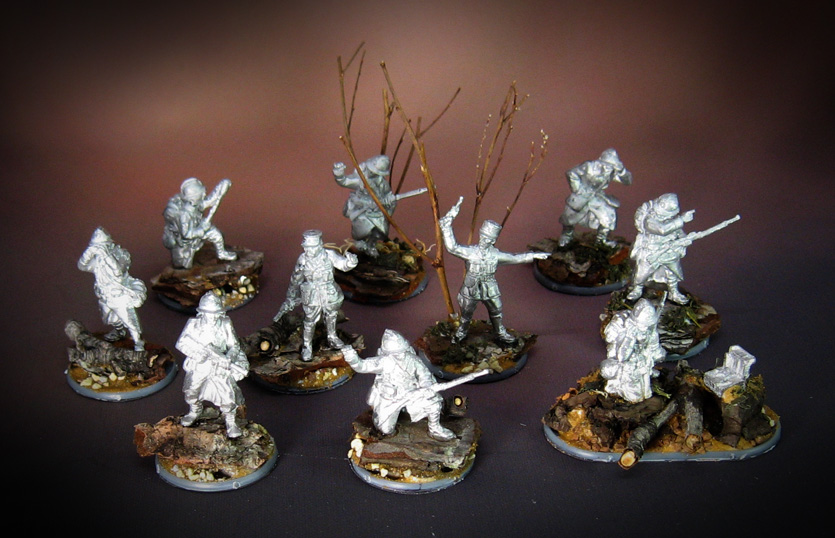 Here's the 75mm light gun.  It seems quite 'heavy' compared to the FoW version, but it was certainly fun to base!  I think the companion gun will have to be set into a ruined building.

I'm looking forward to scratch building the 105 and 155mm guns!  I bought some of the crew figures already in anticipation. 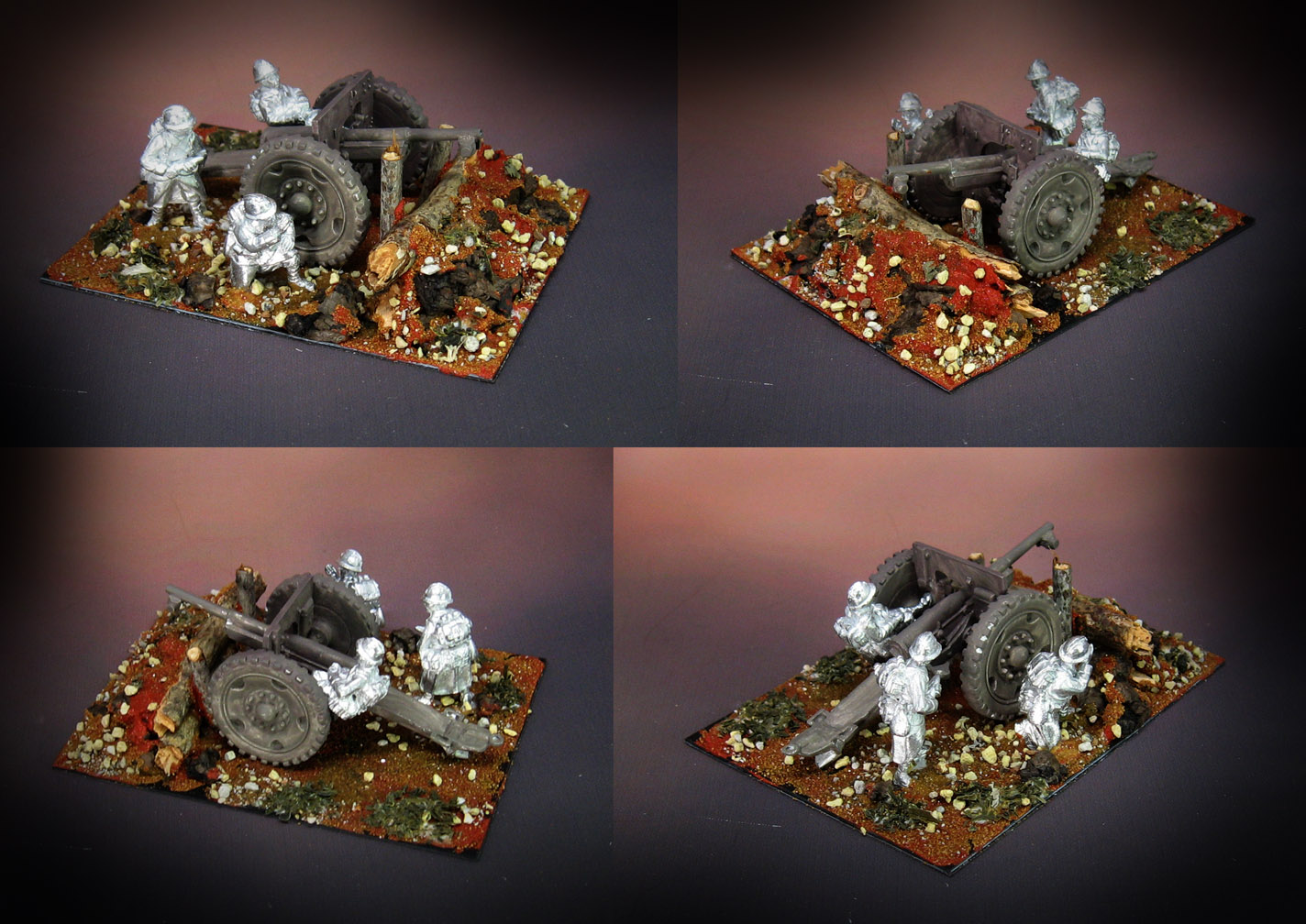 Stay tuned for much more, including some articles on the scratch building of those heavier guns!  I think they will be a combination of sculpey and plasticard. 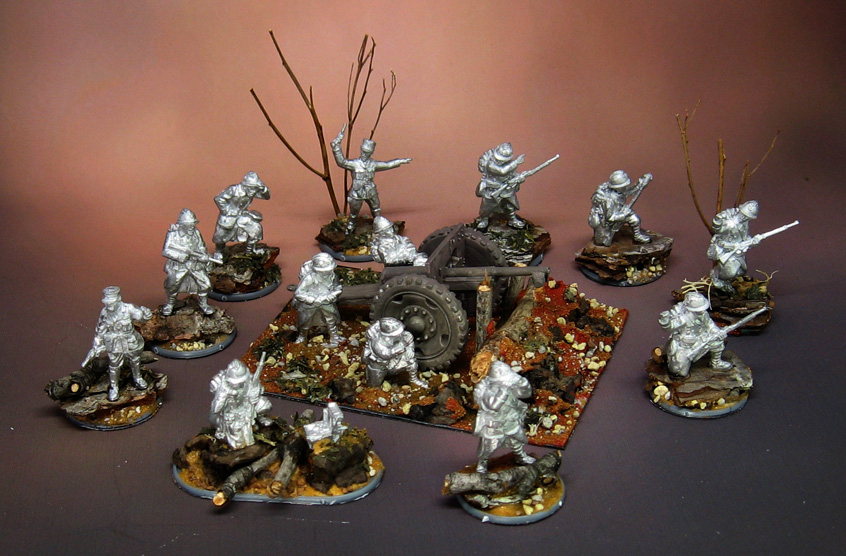 On the Razor's edge: Basing your Bolt Action minis 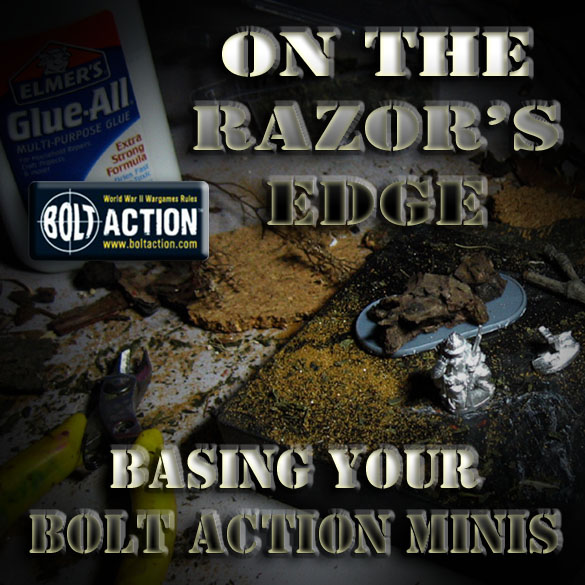 With each new genre of type of miniatures I experiment with, new techniques (or at least adjustments and modifications to existing ones) becomes commonplace.

I have used a mix of bark and branch techniques on the Bolt Action figures, with the unusual footprint of the various poses playing a huge role in influencing what I attempt.

Cork has been used more on these than most recent basing. 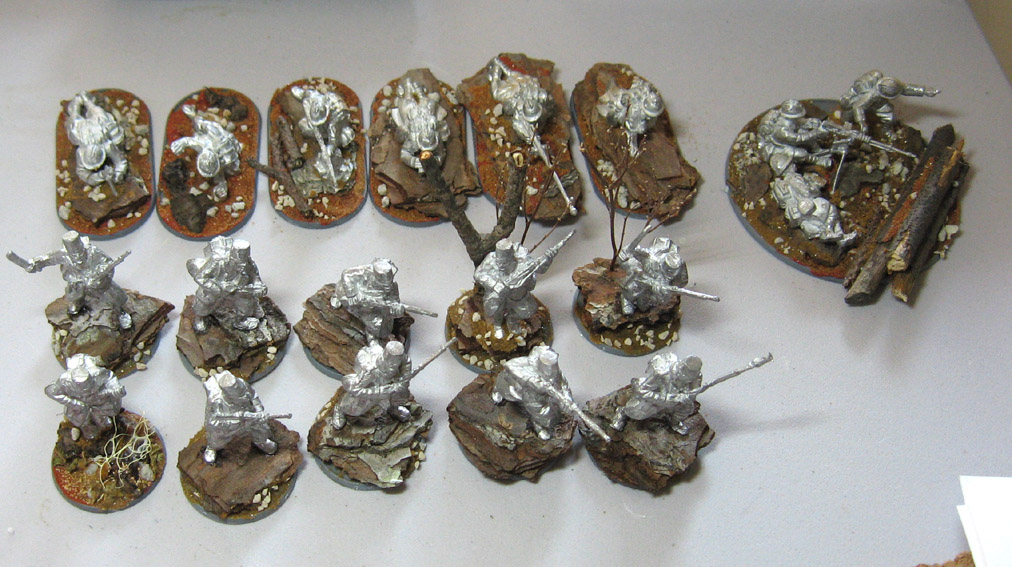 I was doing a massive basing run on many dozens of miniatures last week.  As you can imagine, this is a very messy process!  Better to create one huge mess than constantly cleaning up again and again.  This is the usual spread of supplies.

Bark, gravel, cork, sand, various glues, and so on. 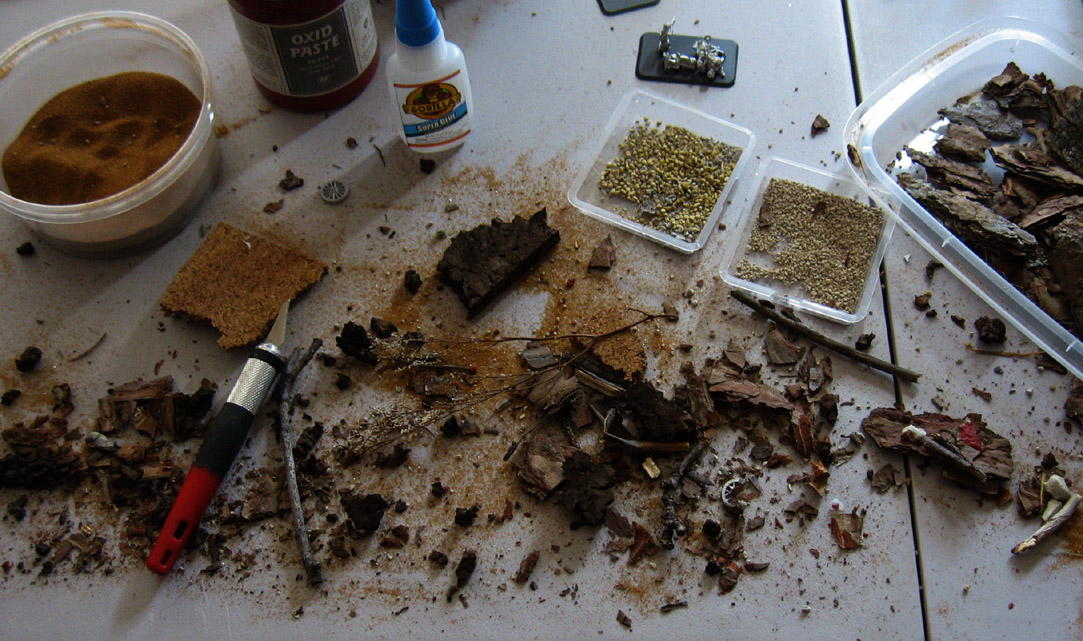 This radio operator had to fit on one of these unusual oval bases.  It's probably smaller than a typical cavalry base.  The cork is bulletin board variety. 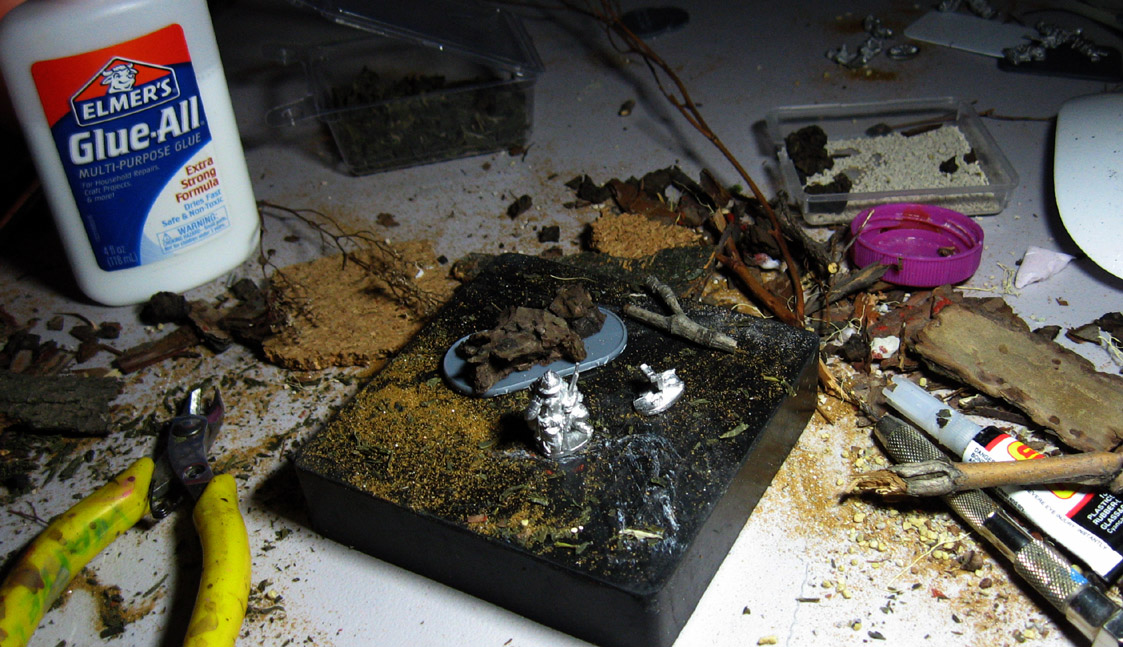 I arranged some pieces in advance to see what might be possible.  This was at the very end of a massive 14 hour session, so I was not about to dig out more materials for this one! 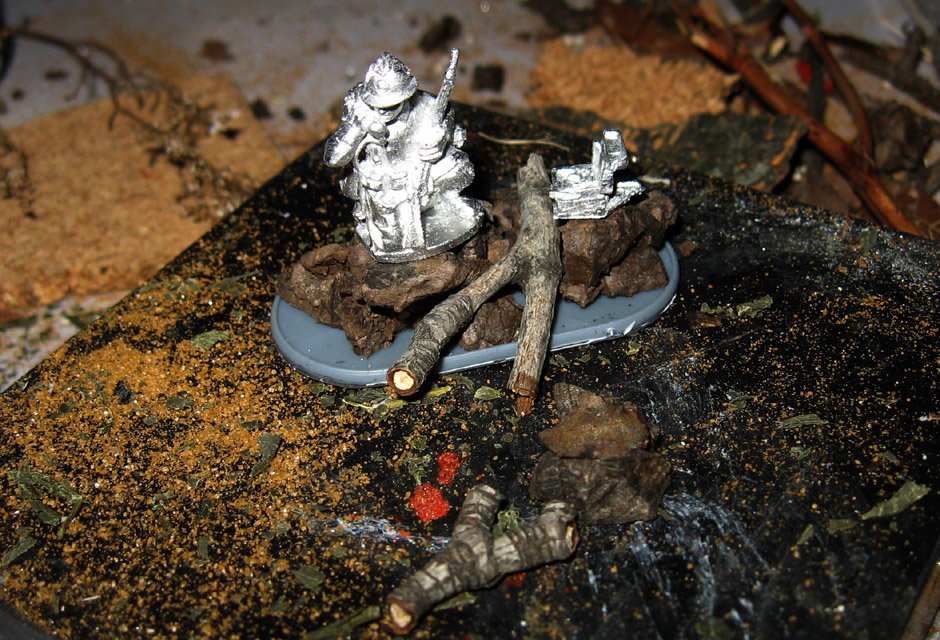 I didn't even want to break out the Oxide Paste.  So, it was going to be a test of what could be done with regular glue and super glue. 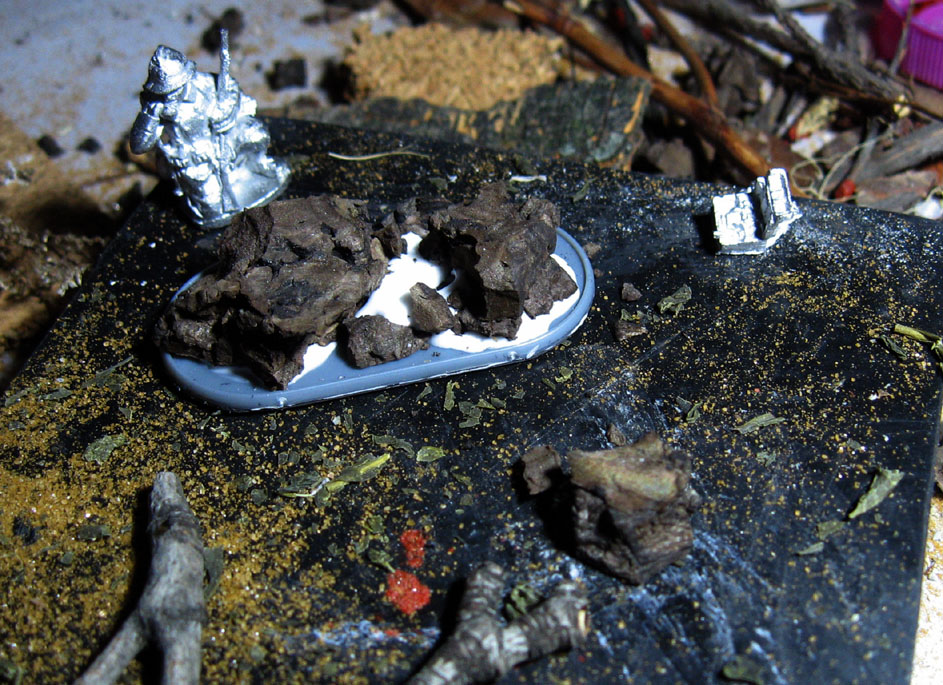 A few applications of sand and gravel not only filled gaps, but leveled off the heavier texture of that cork. 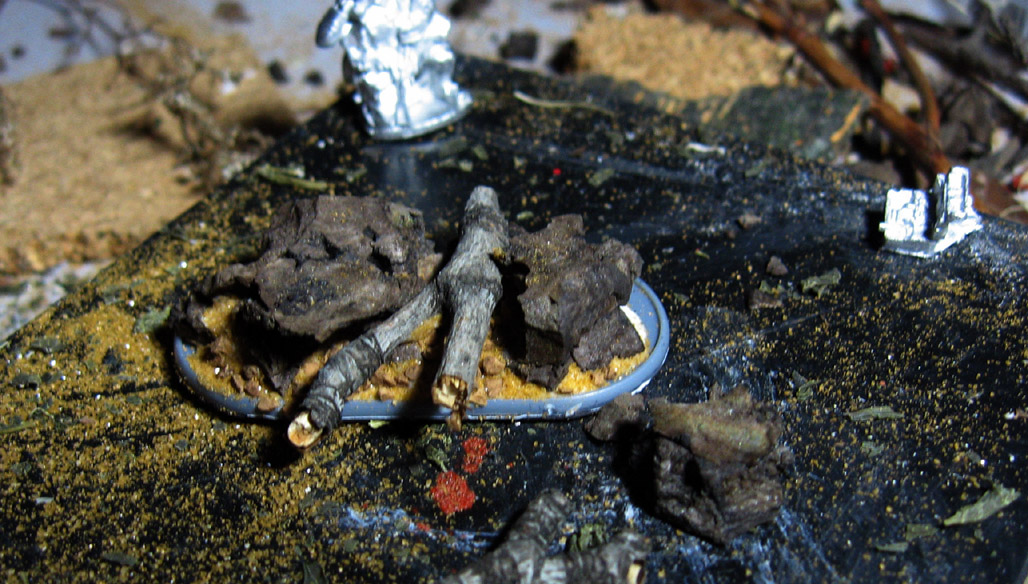 I didn't want to have to use the razor saw to chop off one more sprue/base, but the jeweler's block was handy, so away went that extra base! 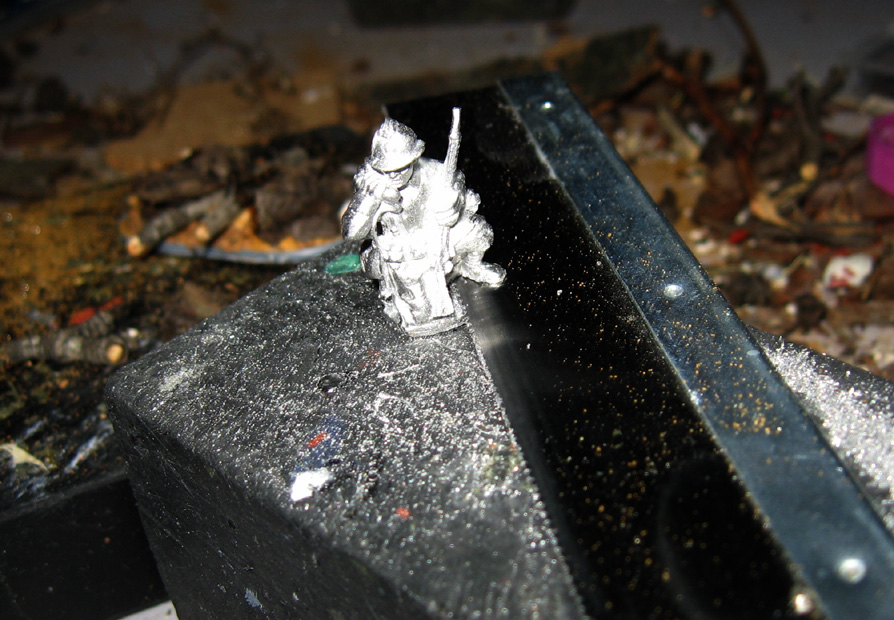 That made him much easier to place on the left side. 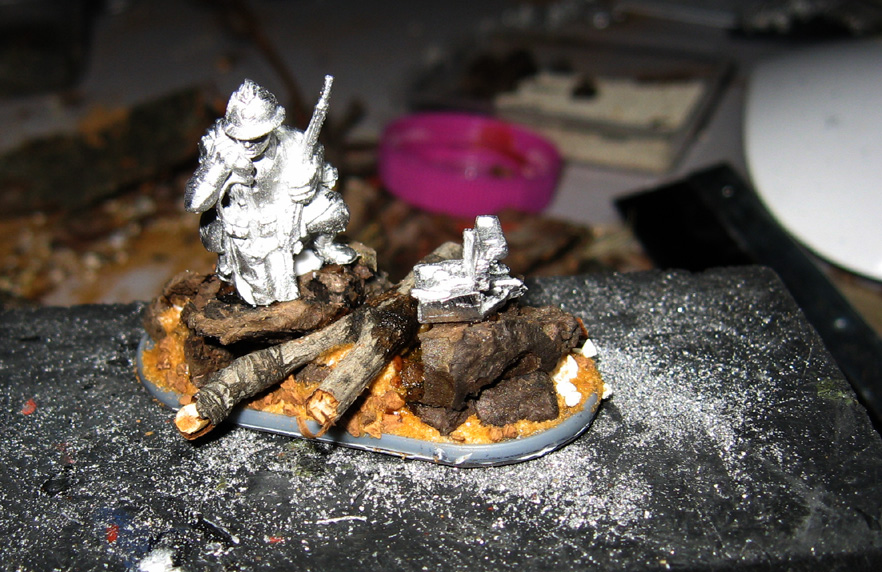 These are tea leaves that we saved, since crushing them up proved to be a very nice ground cover material.  Unlike oregano and other spices, these blueberry tea leaves were easy to break up and scatter. 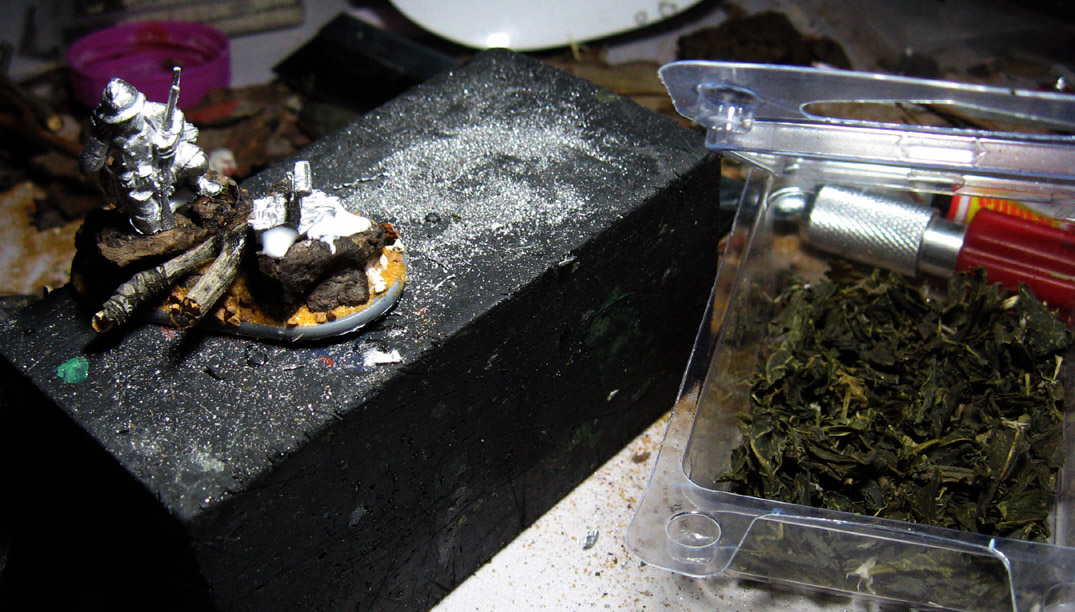 You can see some of these scattered over the sand and cork.  A little pinch of sand was added over the top, making it look more like real ground cover as opposed to lightly minced oregano leaves! :-)

It's just way to easy to recognize that gambit these days! 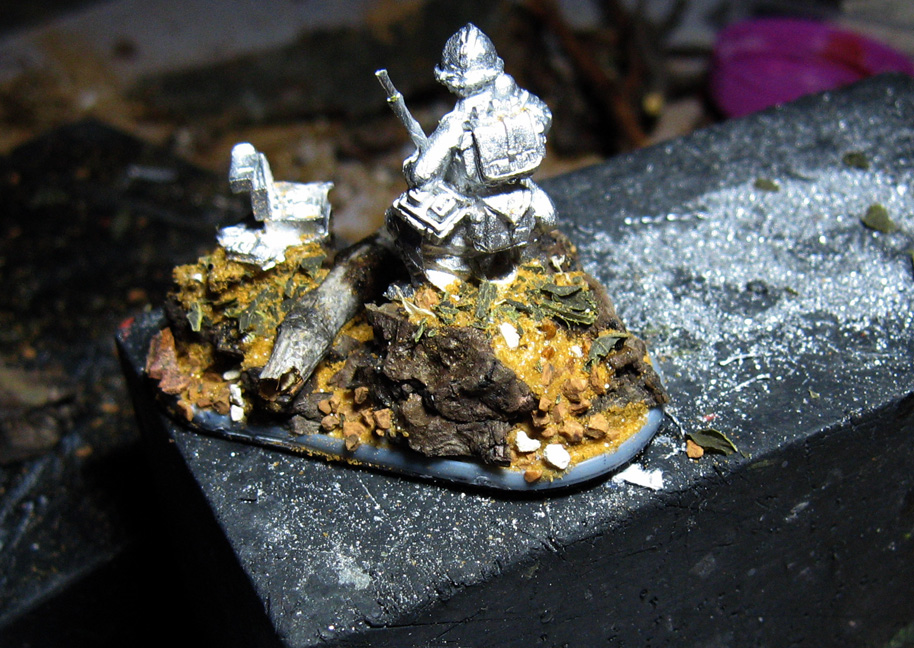 Posted by wappellious at 2:06 AM 2 comments: