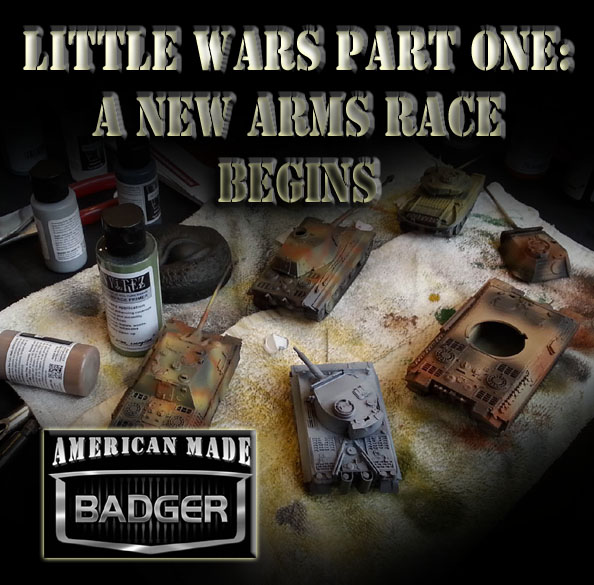 After many years of attempted persuasion, we finally made it to Little Wars!  I had no idea what to expect, aside from seeing lots of historical minis. :-)

It was held at the old Adepticon hotel, the Westin in Lombard.  There were lots of huge tables set up in the main ballroom where epic games of Flames of War and Bolt Action were taking place, along with many other historical wargaming systems.  There were some 1/700 scale naval combat games in progress that certainly seemed interesting!

I never got to see that much closer than a cursory glance, since a quick walk through the vendor's hall revealed a set of tables with Gorgon Studios figures (of Hank Edley fame) and Ken from Badger Air Brush!

Moments later, I was able to get some plastic and die cast metal toy tanks, and an airbrush was in my hand!  How did that happen? 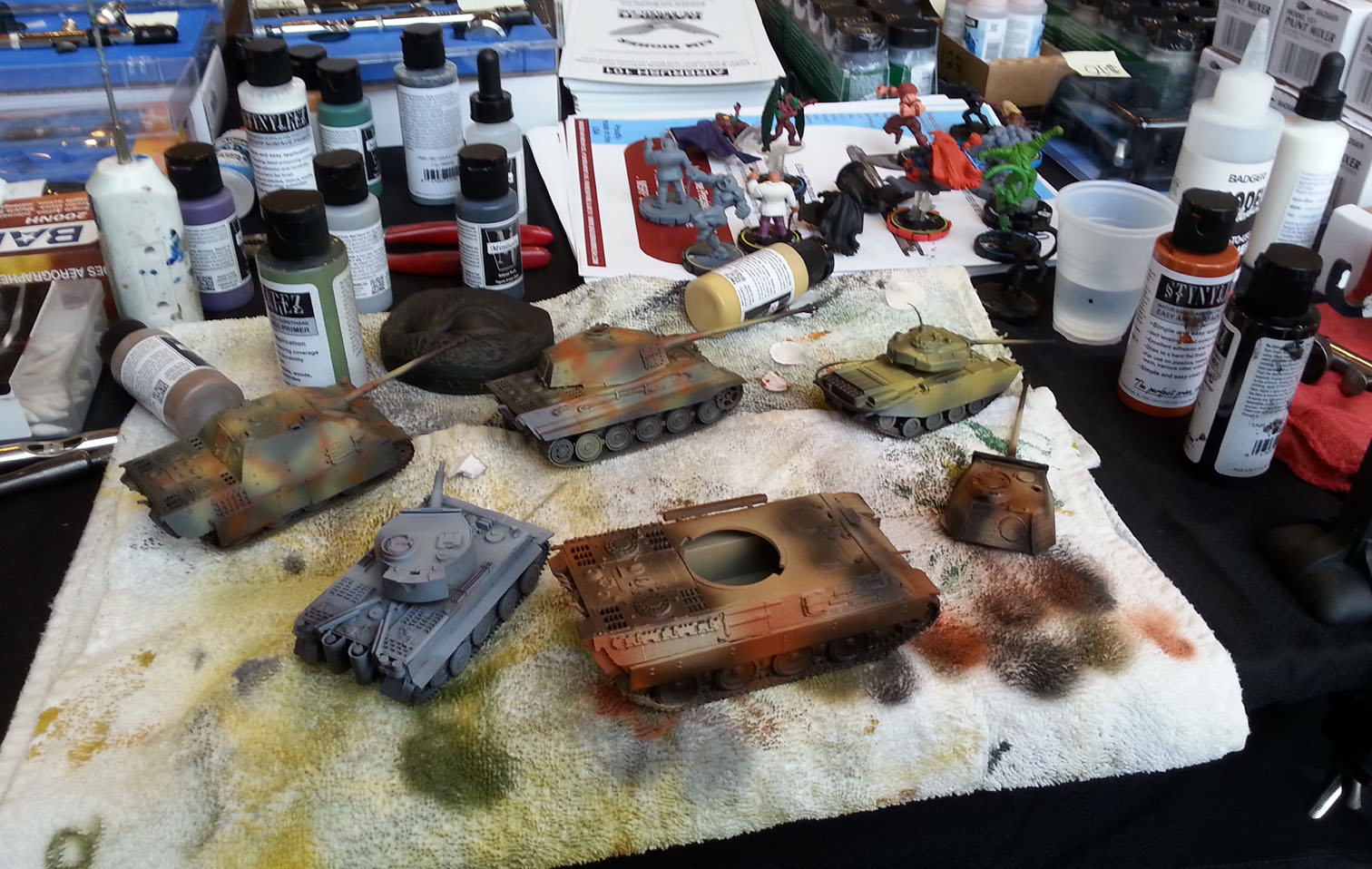 I had a Bolt Action Panther tank as well, so I thought that I had a nice variety of things to play with.  Also, several of these already had paint on them, so this would be a very interesting experiment!

I was going to be able to see how the airbrush worked on "pristine" tanks, and even a die cast Centurion British tank! 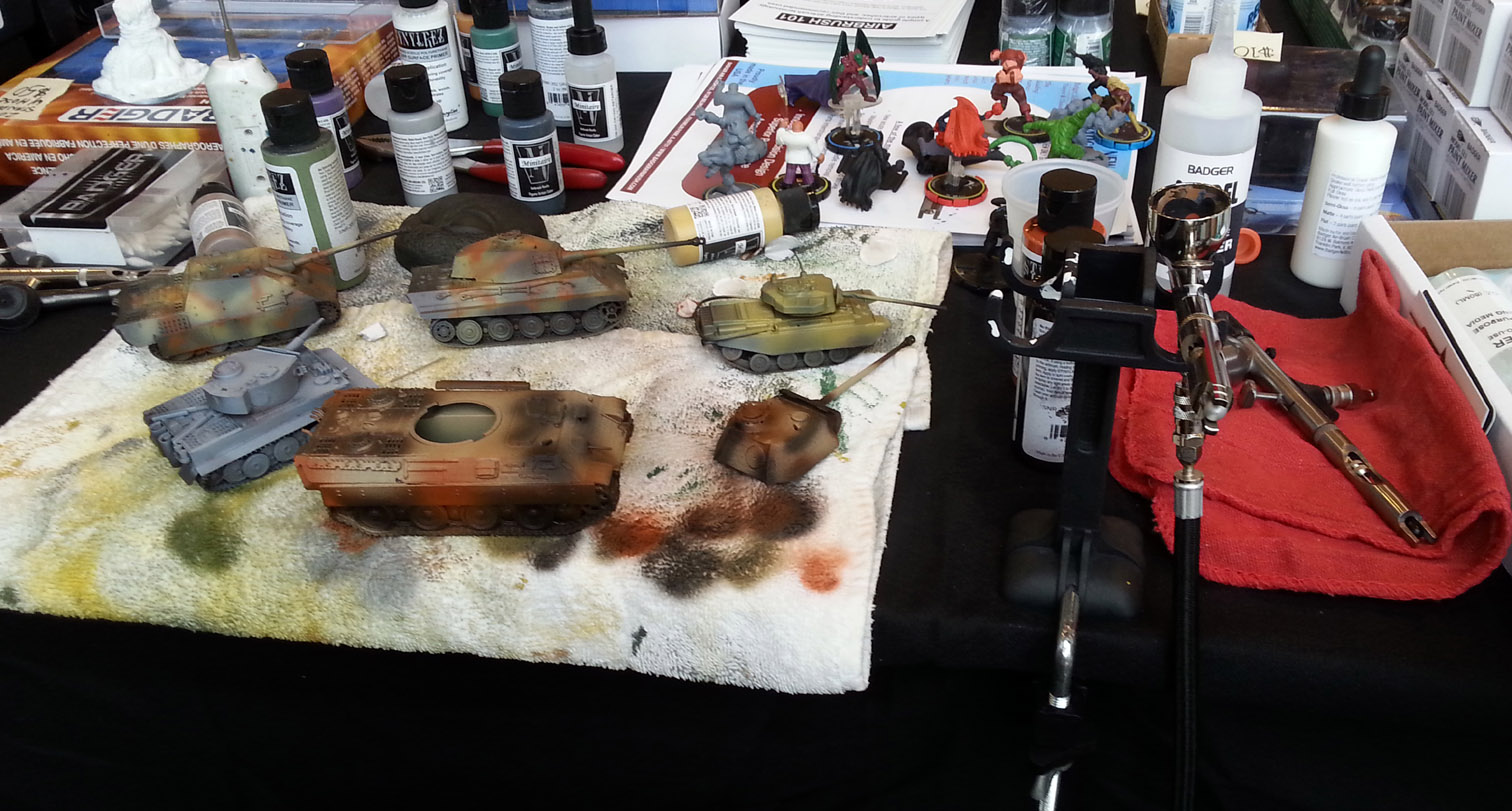 Since I hadn't touched any of my airbrushes for over a dozen years, Ken had no idea what kind of madness might take place... 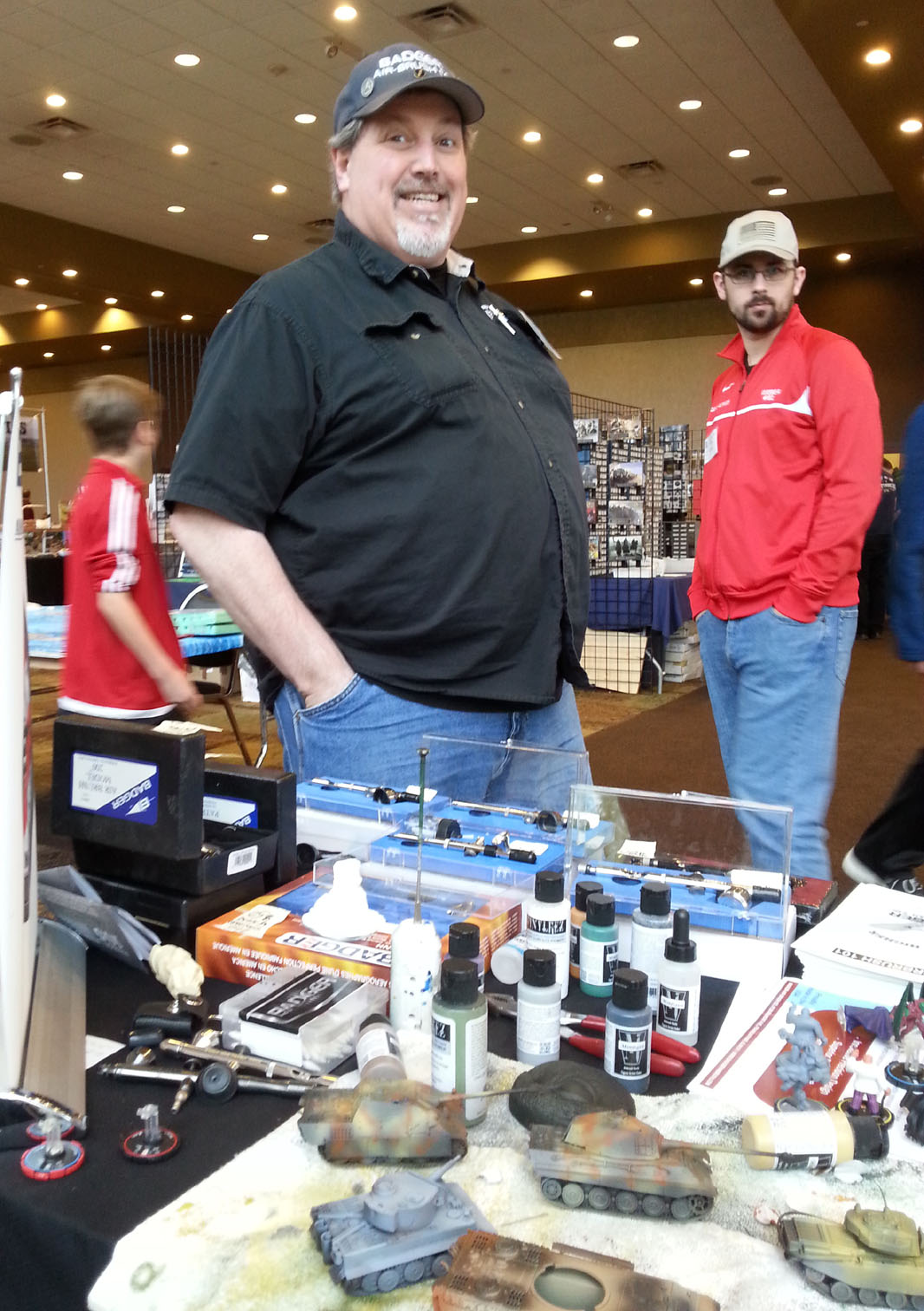 Straight away, I had to "undo" some of the painting that had been done on the toy tanks.  Take note: these toy tanks were just a few dollars each, so they will not be to scale or completely accurate from a historical standpoint! 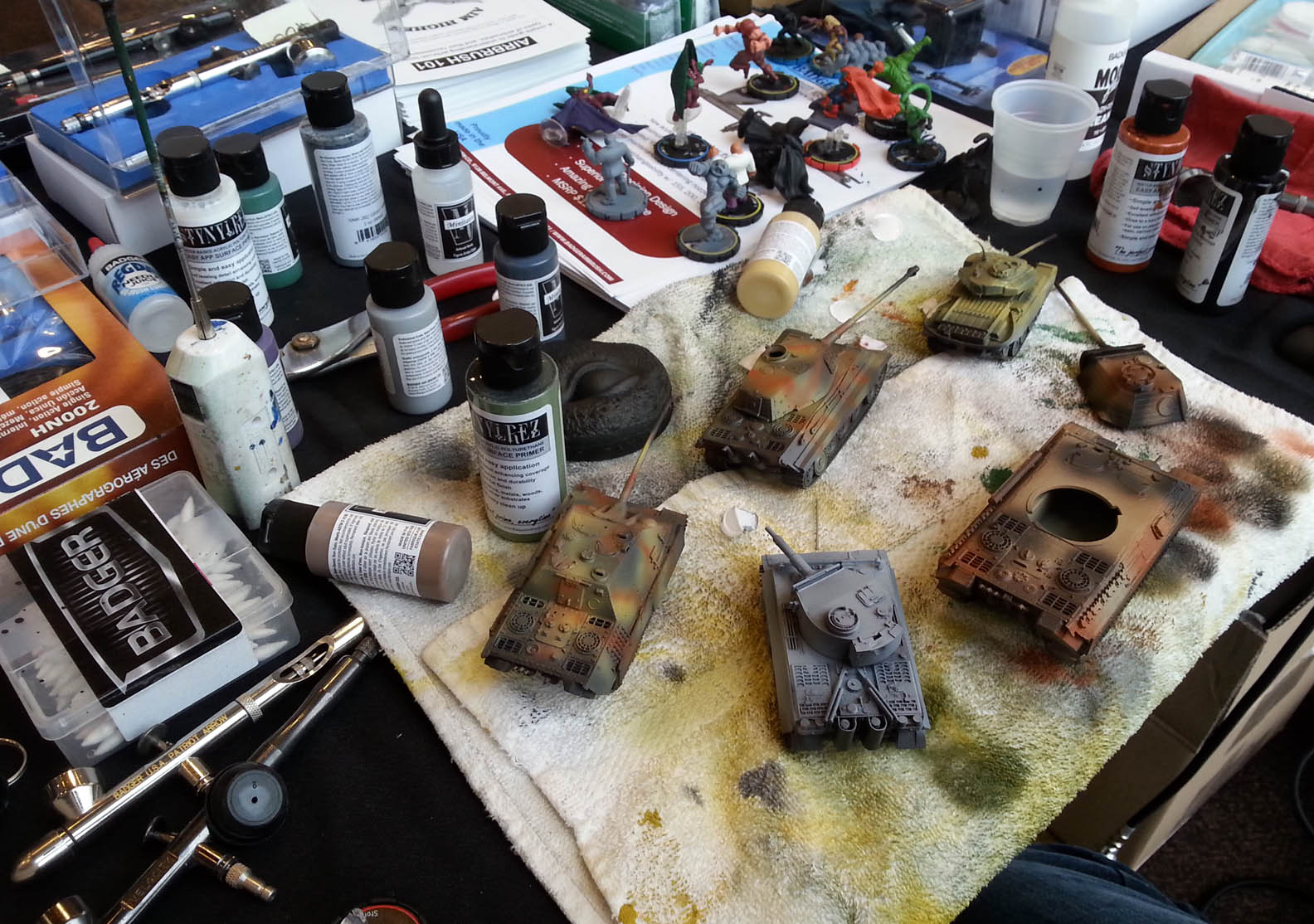 Once I had done a lot of structural work on the undersides of the vehicles, as well as the treads, drive wheels and such, I could get a solid base on which to start painting camo patterns or even the gray on the Tiger 1 (I'll have to make a new barrel for that guy!) 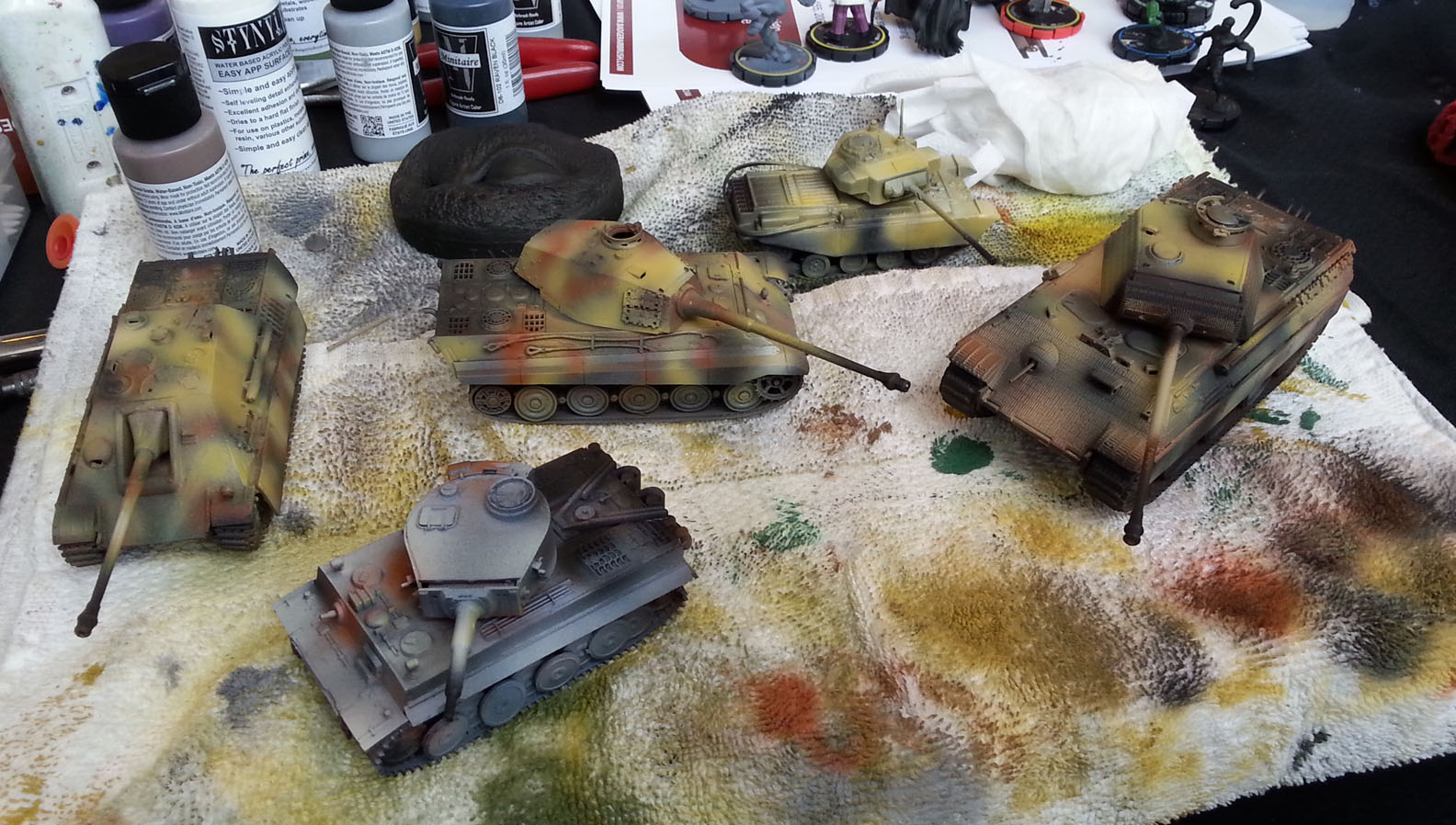 When I started spraying, the first color to come out was orange, of course.  However, as I kept spraying, that color automatically transitioned to brown, then to black!  Once the black started to run out, the color changed to green, as the yellow started to assert itself.

Eventually, the color became mostly yellow, which made a very nice base for those late war German camo patterns!

From there, all I had to do was inject a little of the orange color back into the mix to complete that late war color scheme. 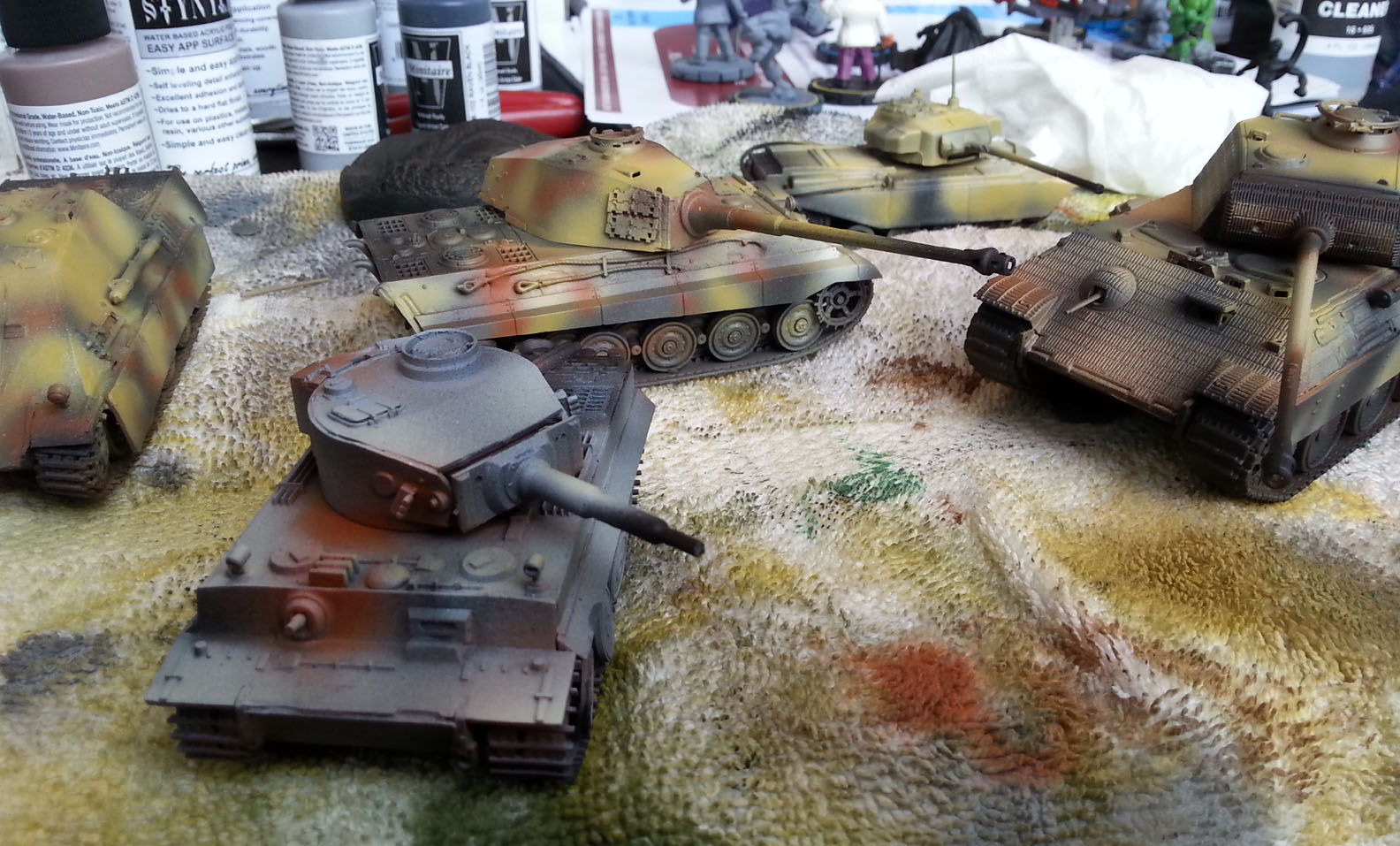 On the Centurion, I didn't use much of the orange, but stuck with the black/yellow "layer cake" approach.

All the while, I was preparing and planning for the time where 'regular' brushes would be brought into the mix.  Meaning that I was doing all the usual tricks for creating ideal areas to show off rust, paint chips, streaks and so on.  If you have seen my previous tank weathering articles, you know what I like to do there.

This is also where things got interesting.  I had not brought ANY of my painting tools!  No brushes, no paint, no nothing.

So, I bought a few brushes, grabbed a piece of paper that seemed somewhat water resistant, and realized that I had no paint colors!  All that was available was a few of the primer colors still on the table.

You all know that I like "primer painting", so it was not a total loss. 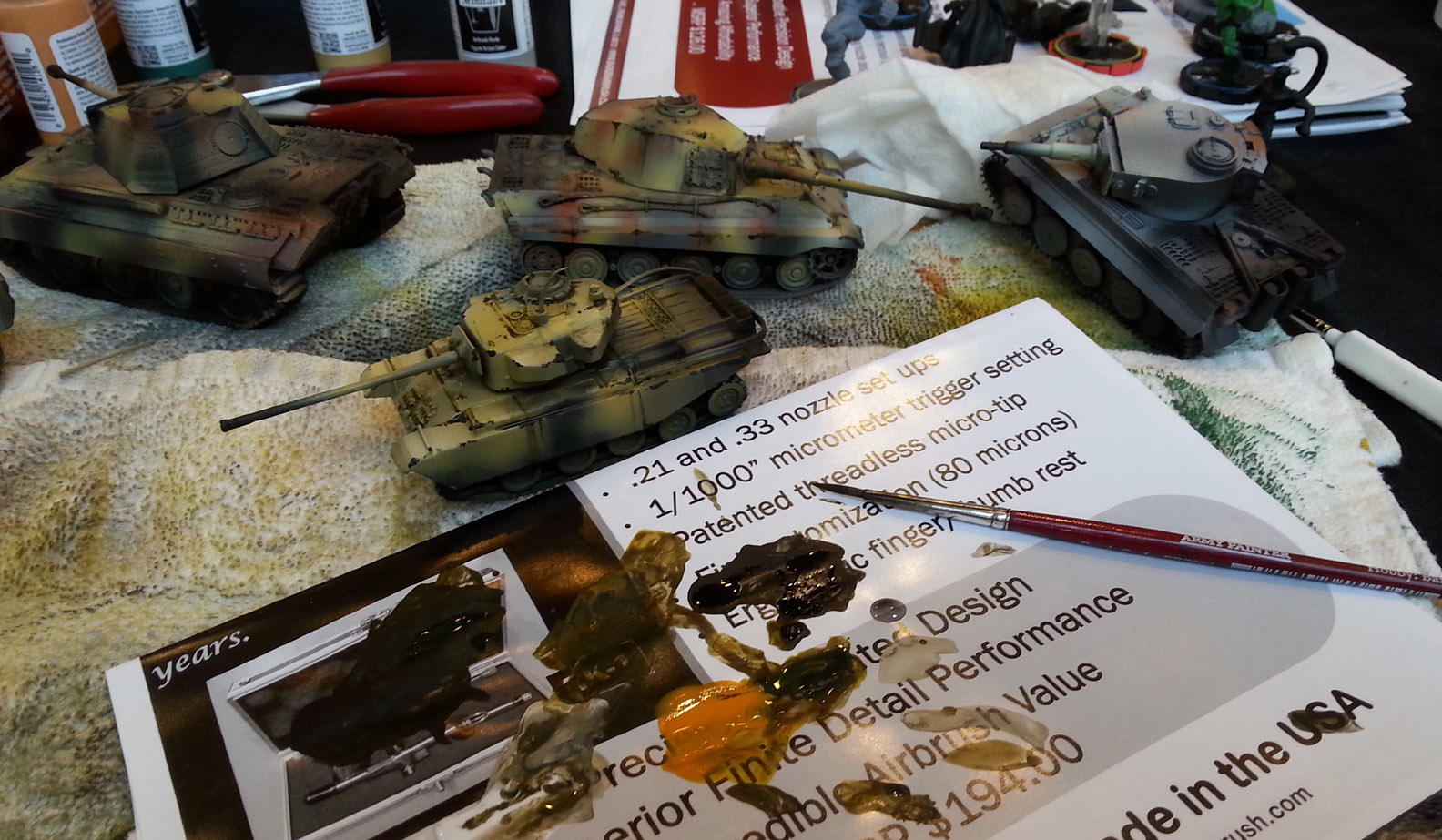 You can see how mixing up some of the primer with the one or two airbrush colors made some very nice shades to use for the next phase.  I focused primarily on the shading of deep recesses and paint chipping. 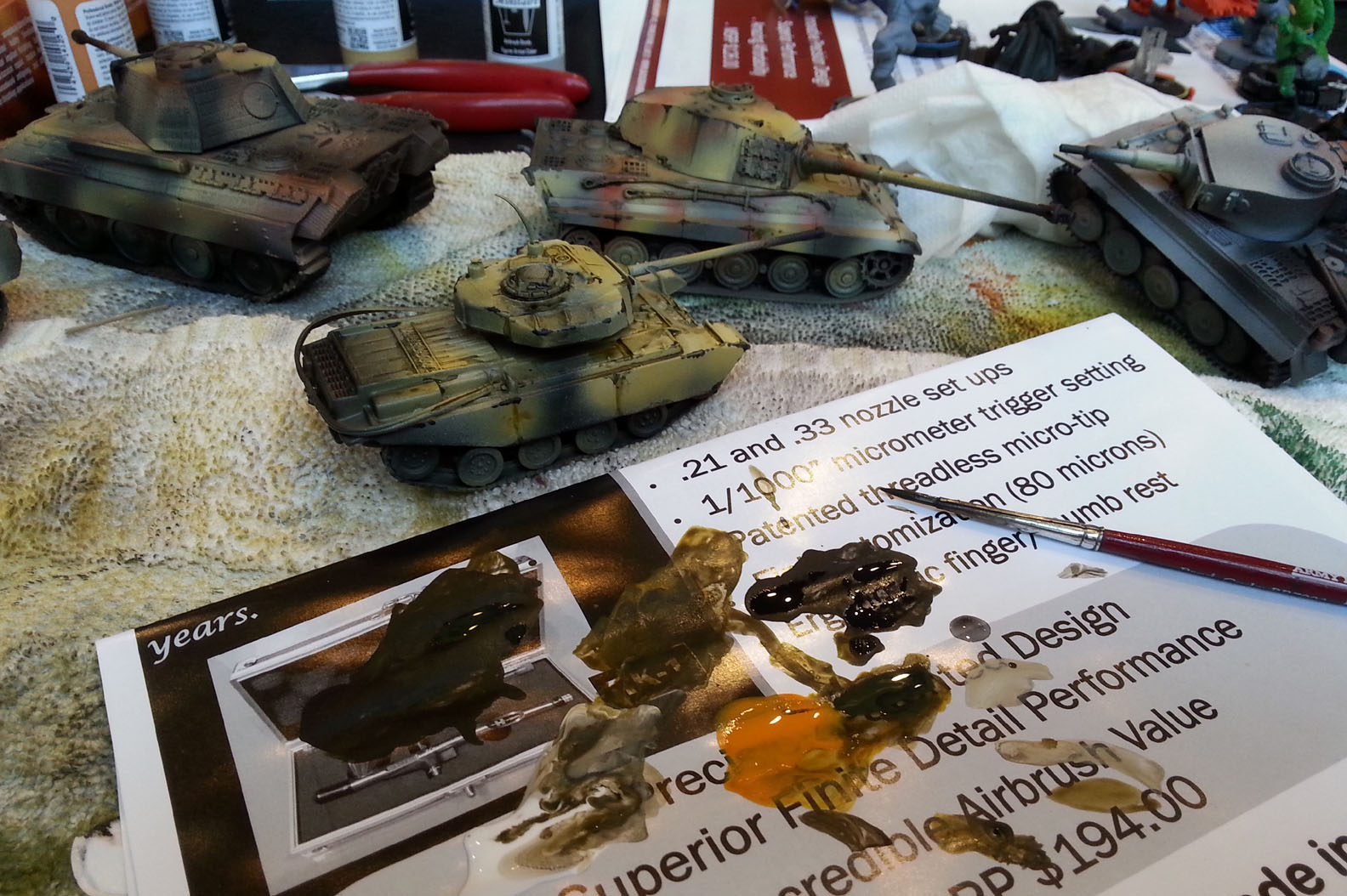 This small amount of additional painting, done without my magnifier light, made an instant impact!  I was trying to do these as a demo for folks gathered around the table as well.

Because, when you haven't touched the airbrush in 12 years, and never painted a tank with it before, that's the perfect time to demonstrate it!! 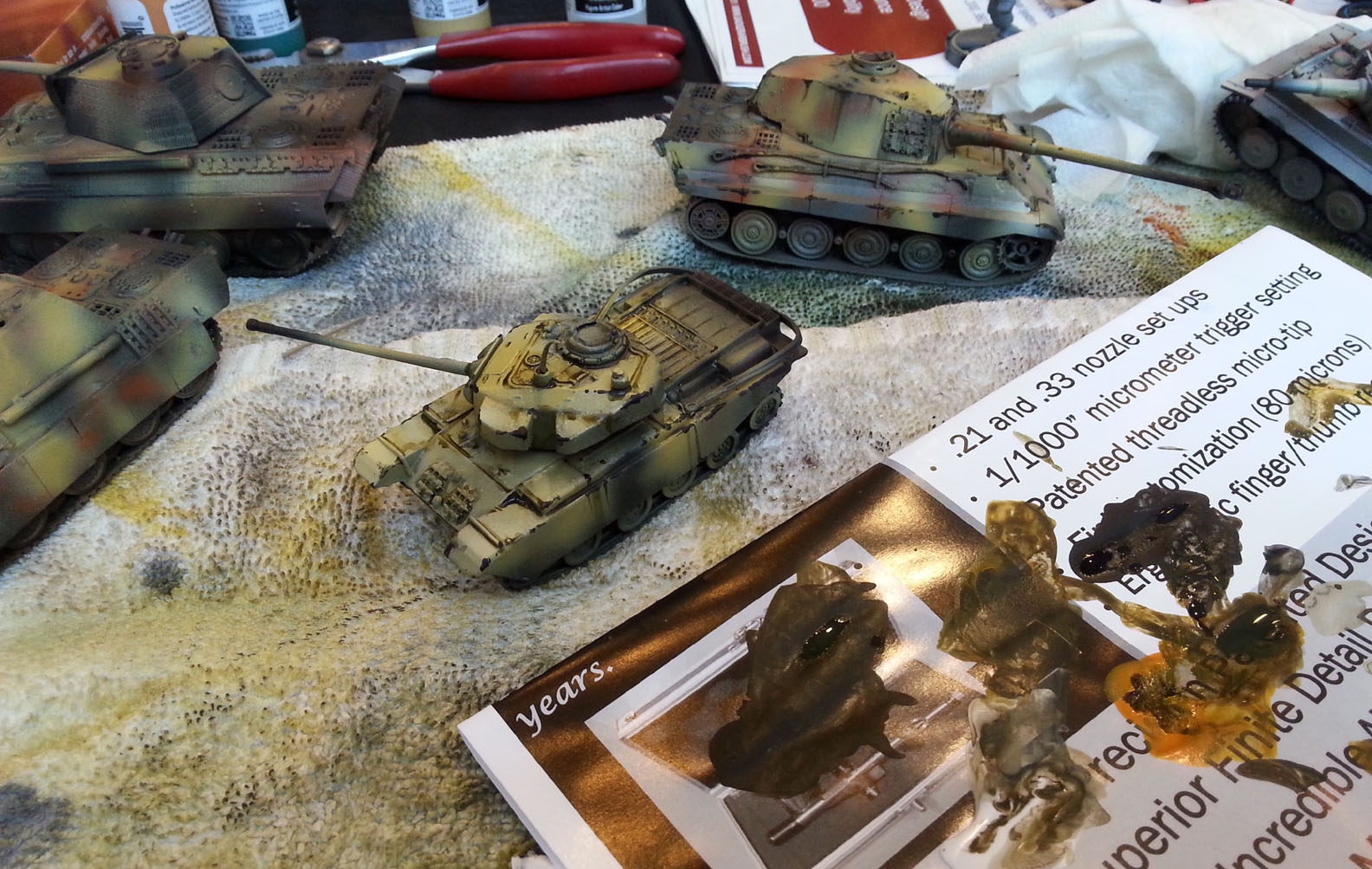 I only had white primer available, but it still made a nice base for some of the insignia.  Hard to do without my magnifier light, but it was necessary to continue the demo. 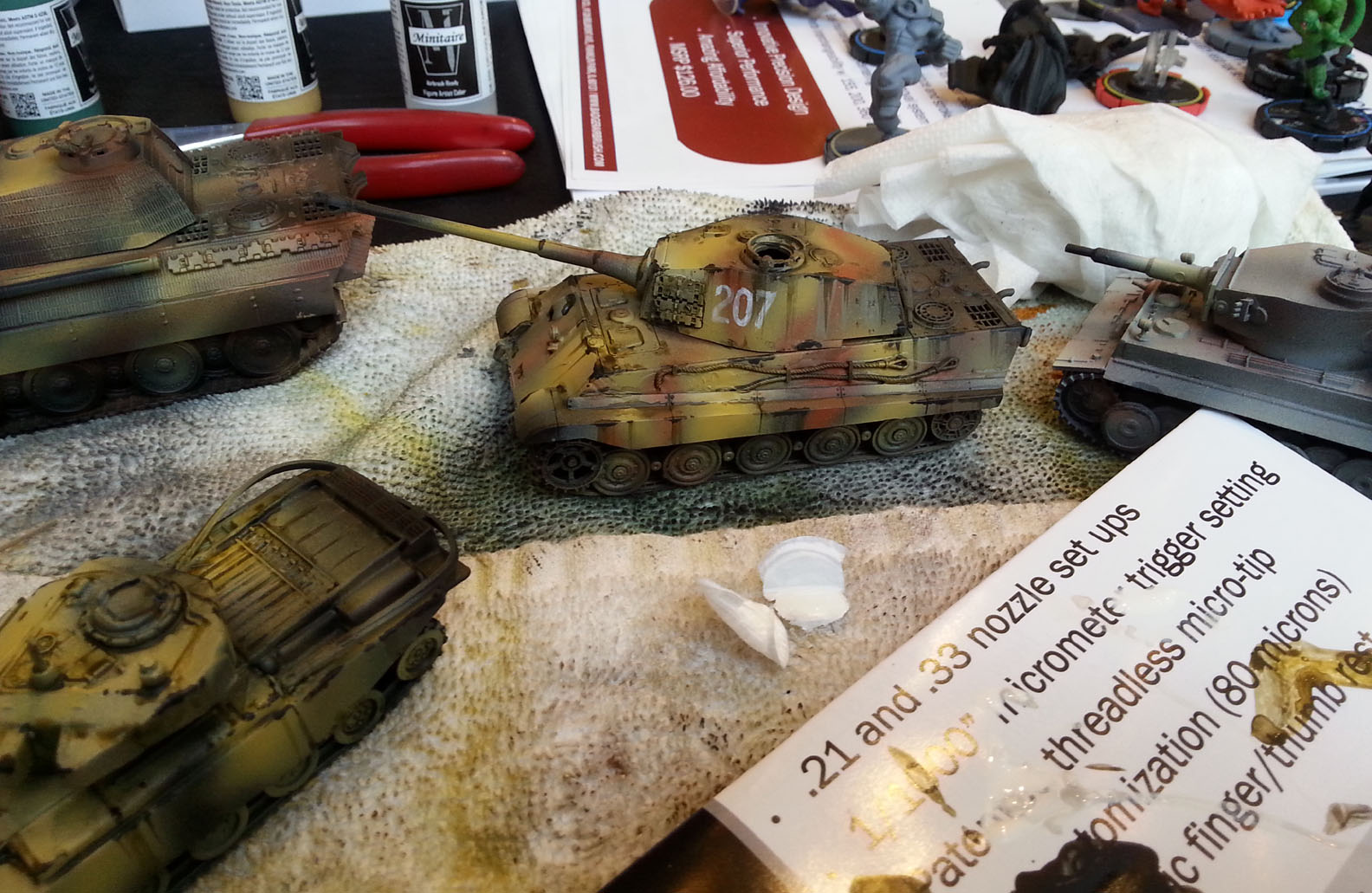 You can see those yellowish green colors that I was using to shade some of the more detailed recess areas on the various tanks.  I worked around hatches, rivets, gaps between armor plates, and more. 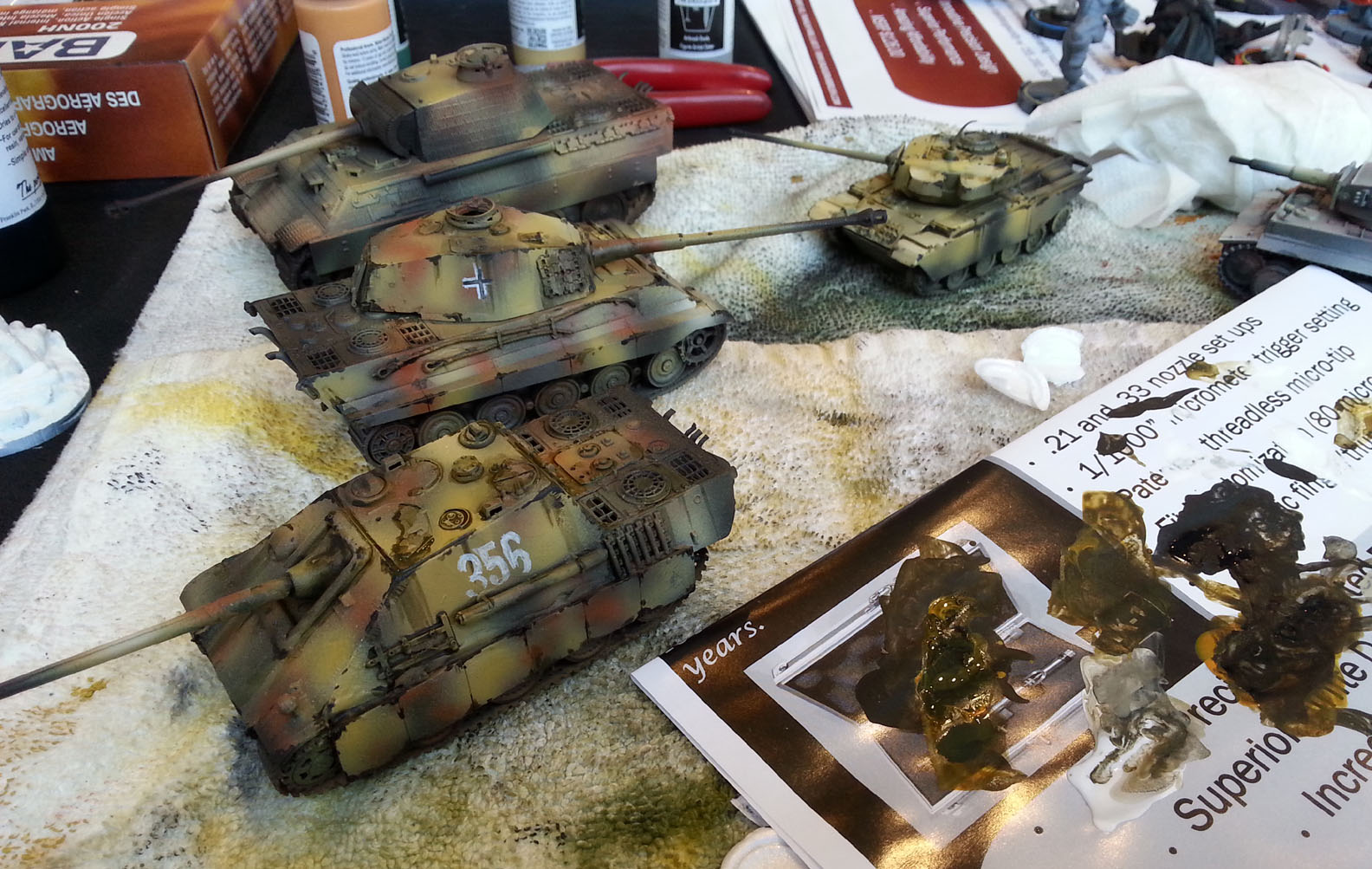 Once I had the paint chips established, I could do some streaks running down the sides of the turrets and hulls from those "starting points".

Stay tuned for much more from the Little Wars Airbrush Escapade!! 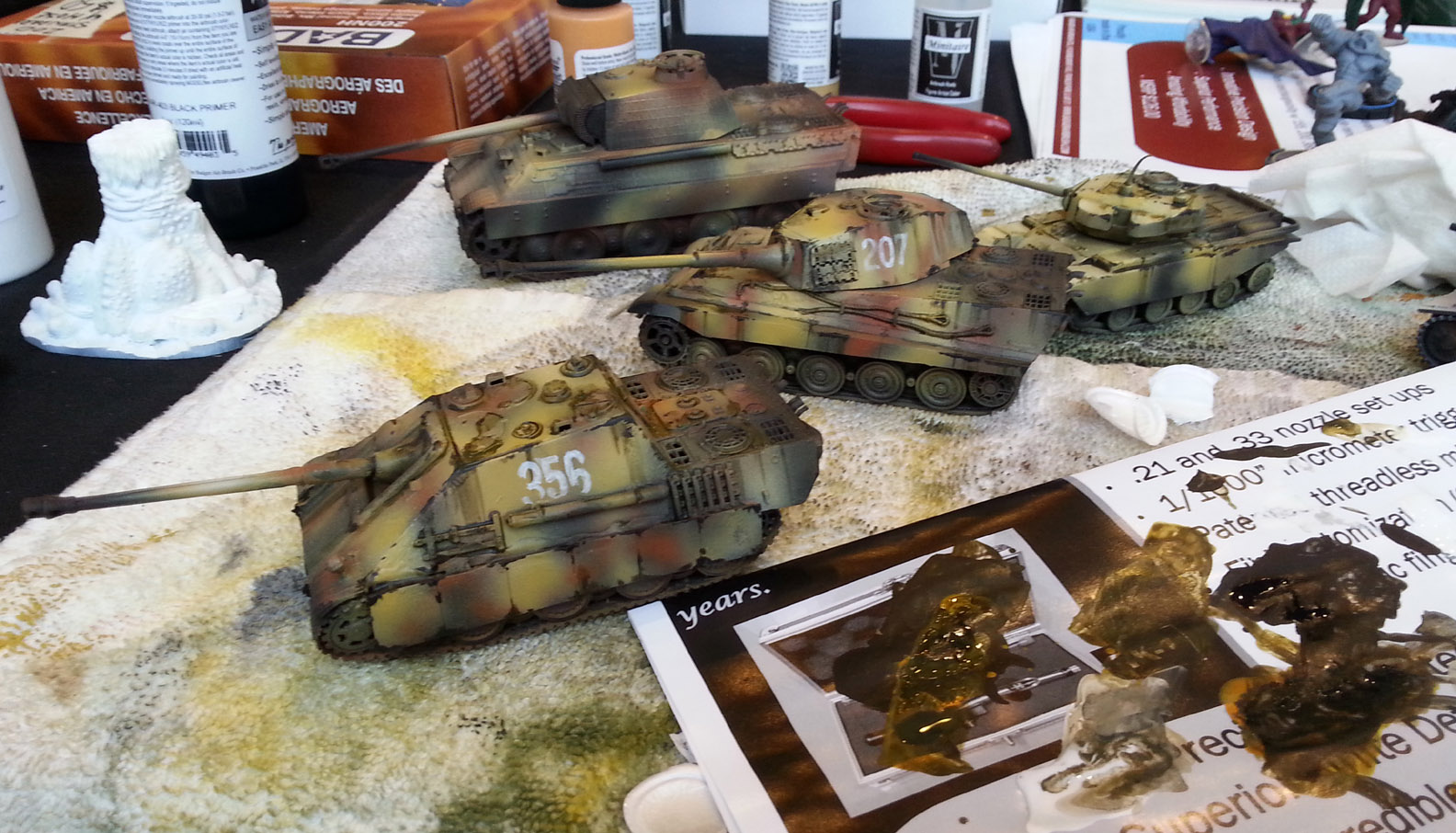 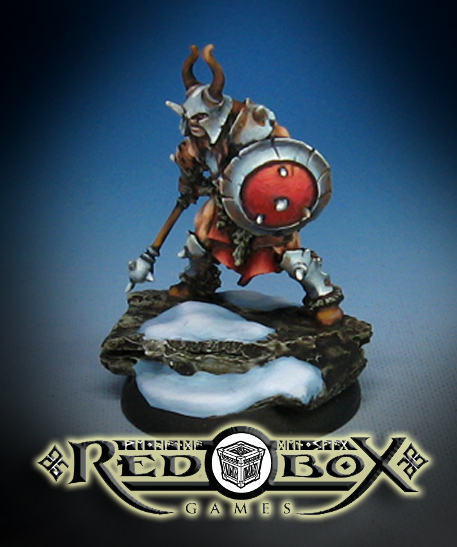 Here's a little break from the pirate basing series.  The latest in the set of Red Box Games barbarian style figures.

As before, these guys are following the same basing and color scheme which has been used for the rest of the massive army!

I have had fun working with a variety of color combinations on the metals.  The latest experiment involved mixing a Reaper midnight blue with a very light grayish green.  When juxtaposed with the warmer rust colors, those greenish blue tones are neutralized a little and a reddish blue tint appears in some areas.

When you are painting a broader expanse such as the back of that armor plating, getting this kind of color variety and transition is more important.  The viewer doesn't really know why that surface became more interesting to look at, but they will notice all the same! 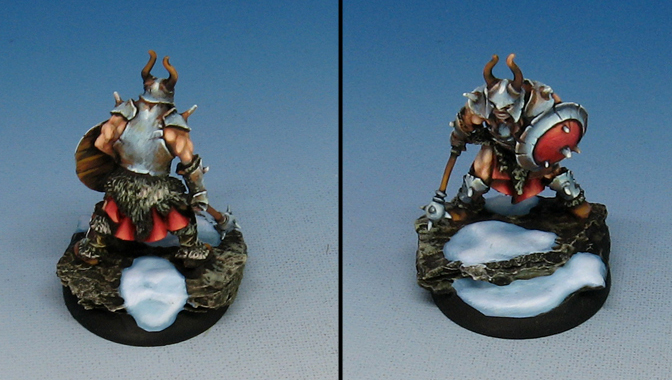 Last but not least, some of the same colors used in the snow must appear on the figure too... particularly on metal surfaces.  To have that influence the skin colors, making them somewhat greenish does the trick.

As for tinting the reds to show this influence, using a grayish green to lighten them will make a grayed down, lighter red color.  This also means you won't get pink or purple, which would happen if you mix light blue with your reds. 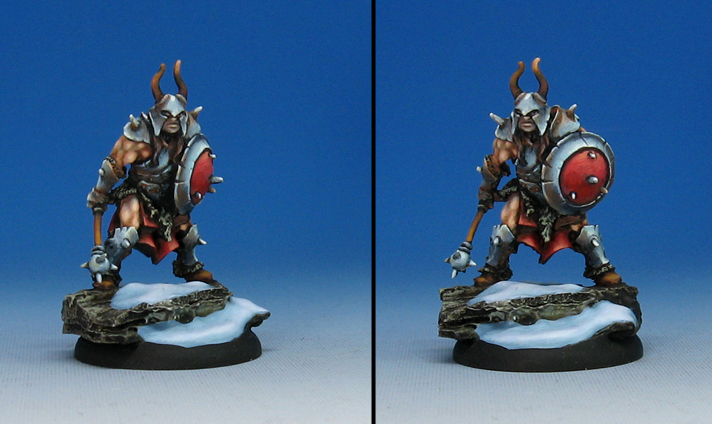