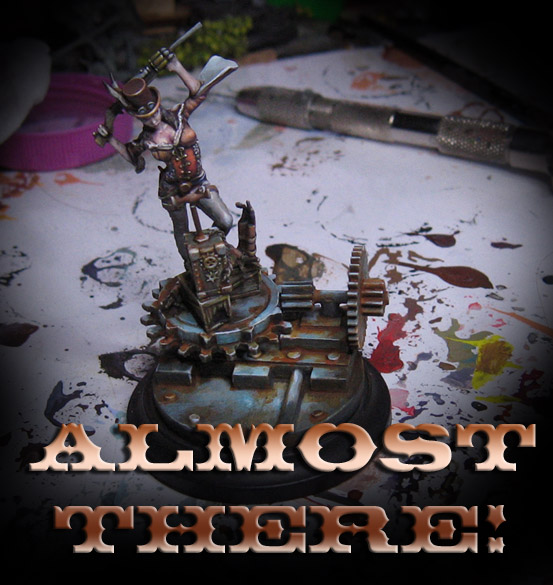 If you are not too afraid to watch, the variation on the Shaded Basecoat technique continues.

What I am doing here is very similar to what I used to do with my watercolors... that is, taking some salt or some other substance and putting that on the paper with the wet paint.

Those would interact in very interesting (but unpredictable) ways, and created some very interesting effects along the way.  I would build from these random effects, letting that chance array of colors decide the direction for me. 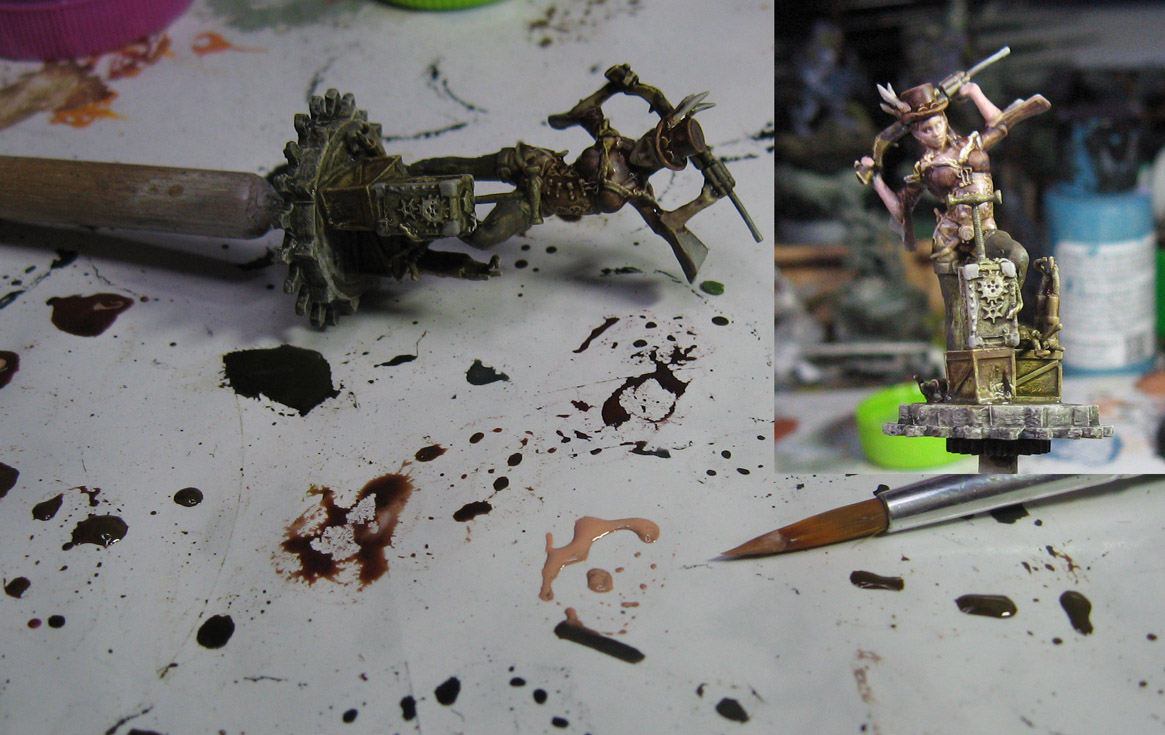 As for this figure... there was a lot more than just the miniature itself.  I was trying to make a little vignette here with the iron base, gears, etc.

Since so many of the colors on the figure would be warm browns, tans and siennas, I put a cooler seafoam green color in the mix for the base.  Later on, this would really show off the rust effects! 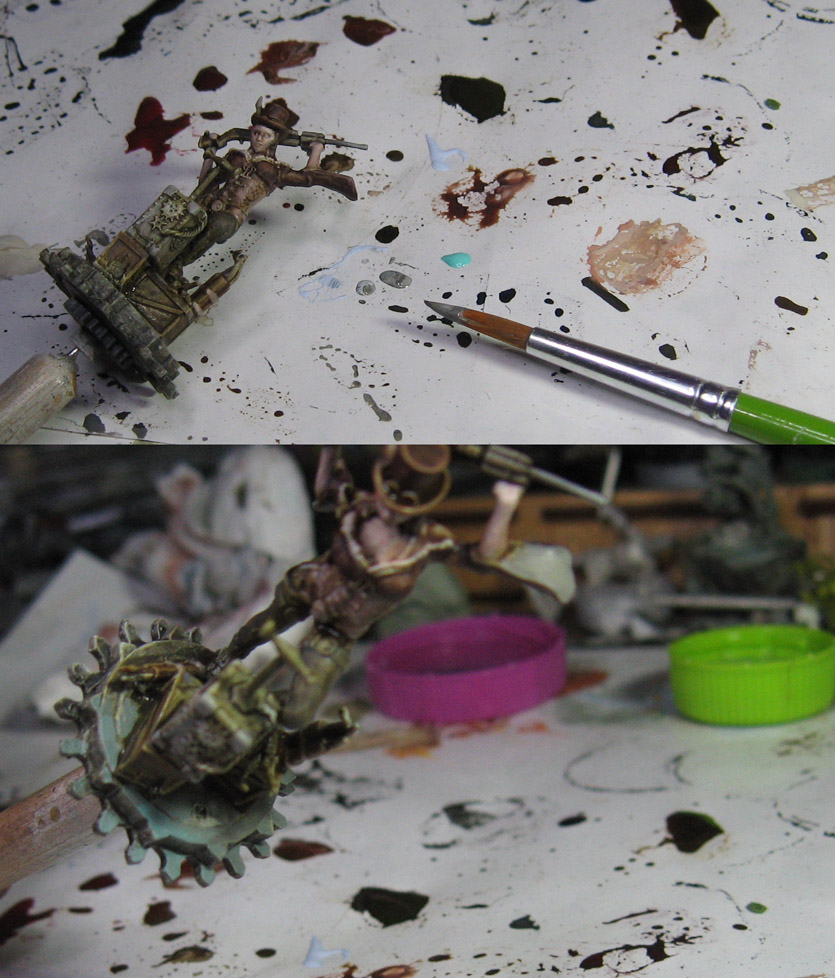 I am mixing that seafoam green with some of the glaze colors, such as umber and black. 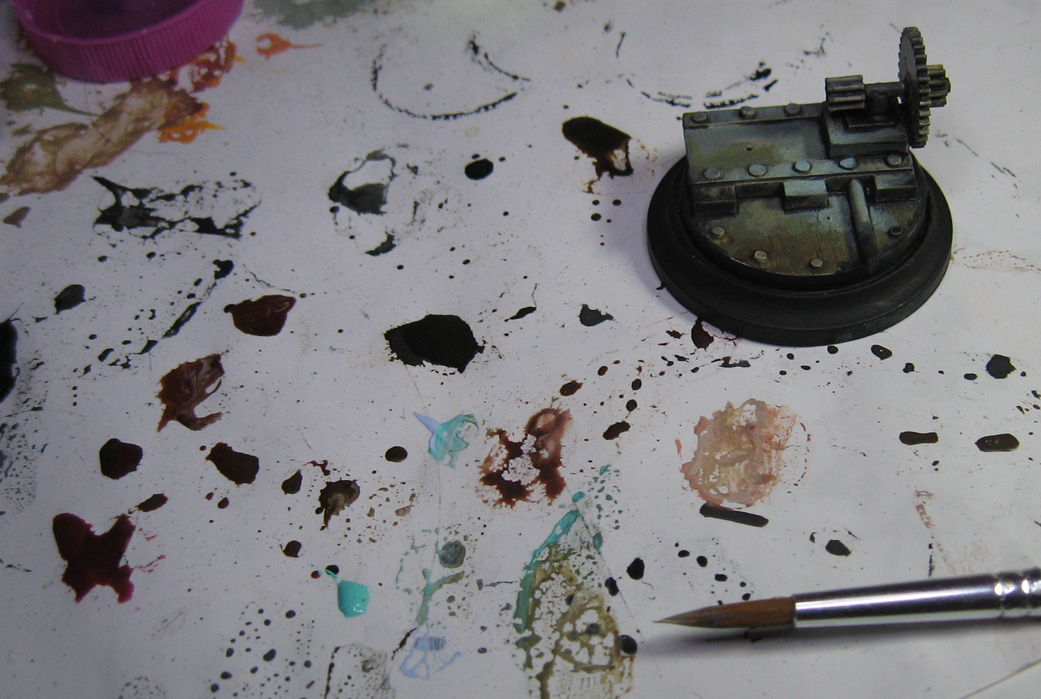 I tried to keep up with the main base and the gears on the figure, so that they would maintain the same kind of spotlight effect. 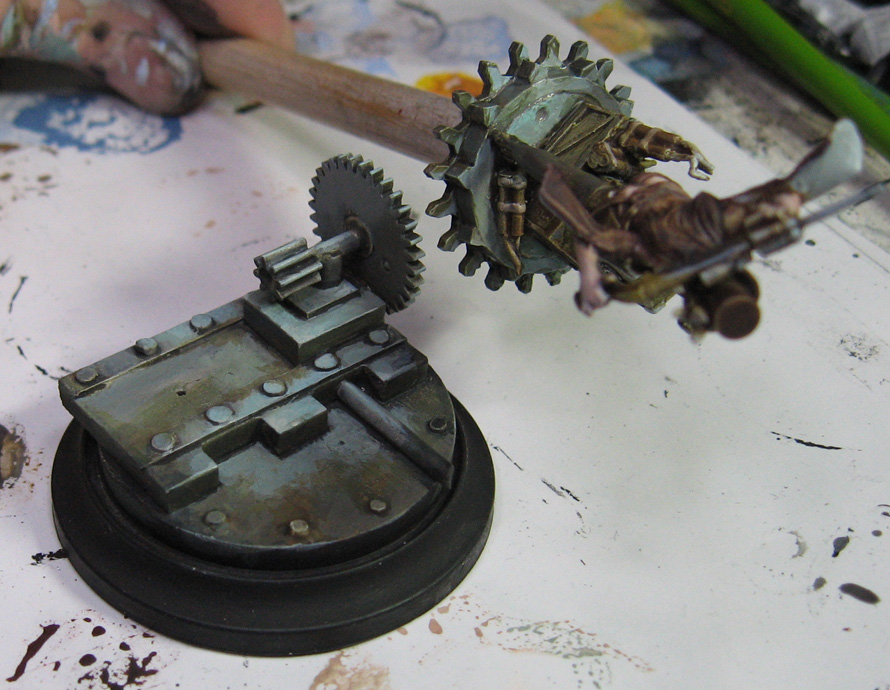 They are just about ready for some rust and weathering! 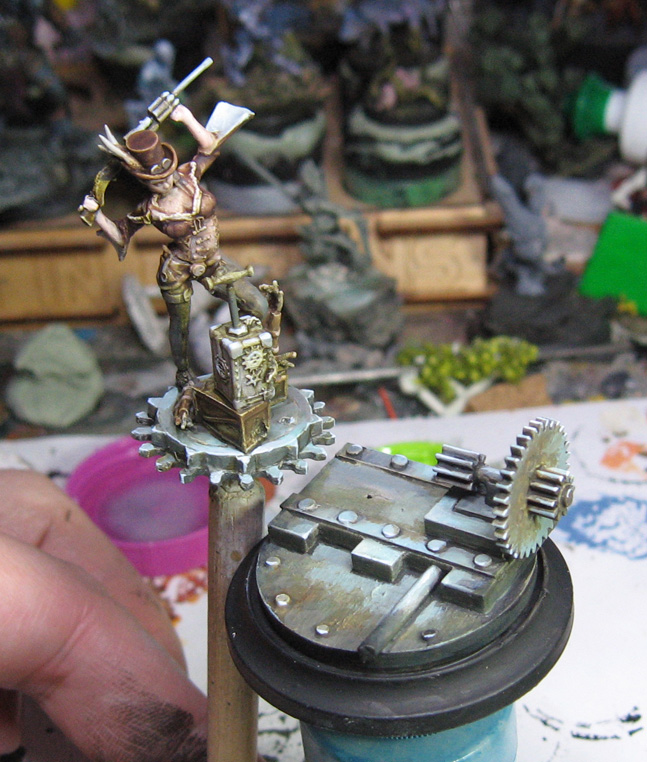 More definition was also being placed on the figure, developing the middle tones and lighter areas.  The important thing is to continue working on all sections at once, and not letting yourself get locked into one tiny area! 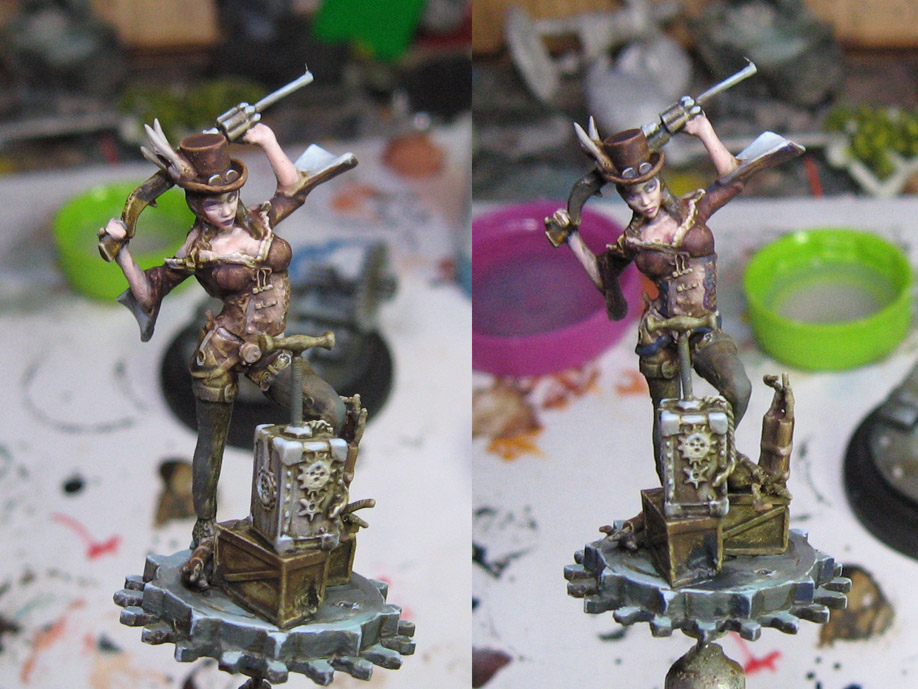 Now for some rust!  It was a simple mix of a rust colored paint and the sepia wash to keep it from getting too opaque.  Once again, more random things would happen when this was applied. 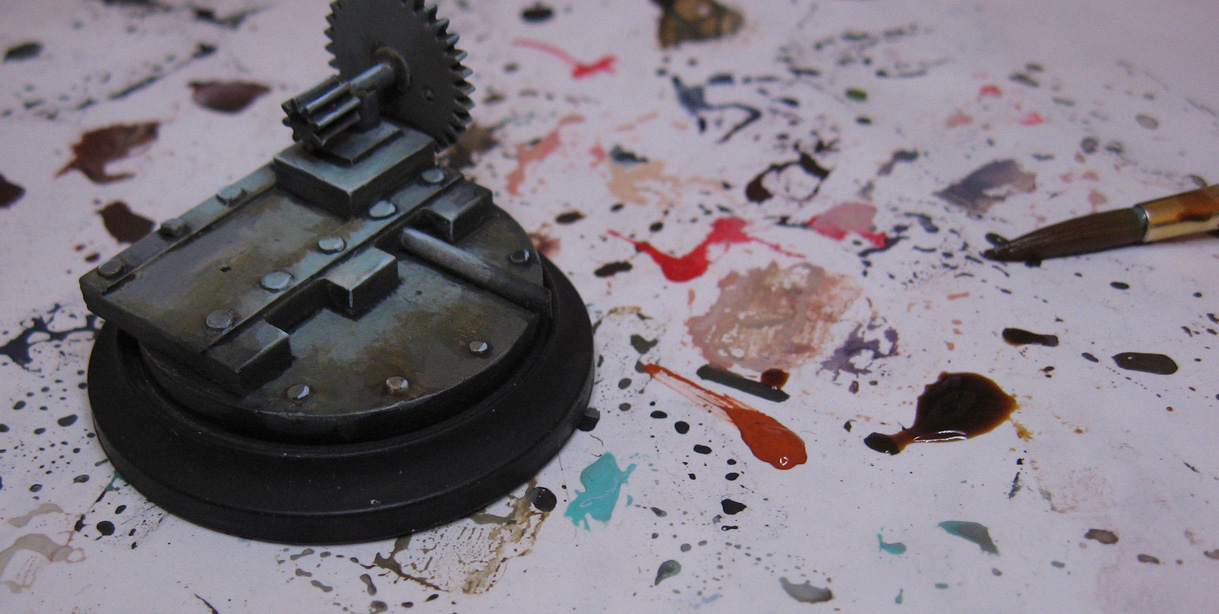 I focused on the recesses, as the oxidation tends to occur there. 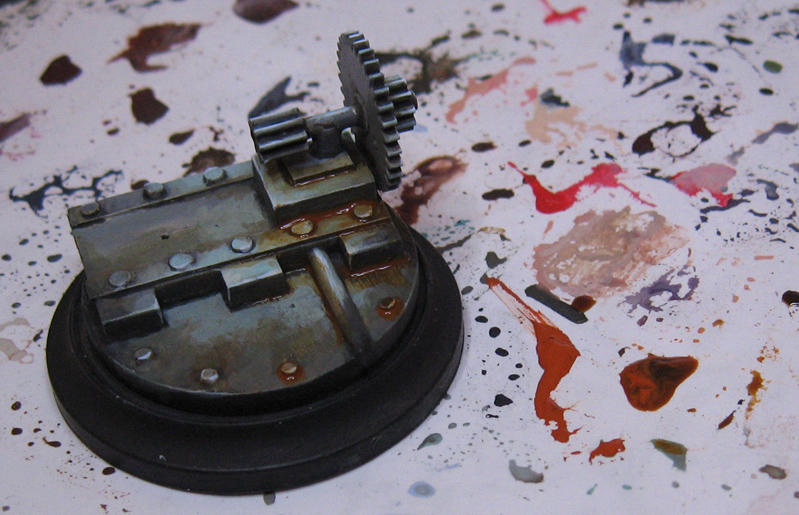 To darken the rust in some places, and even get an oil stain look, I added a bit of Reaper Blue Liner paint... a very high intensity dark paint. 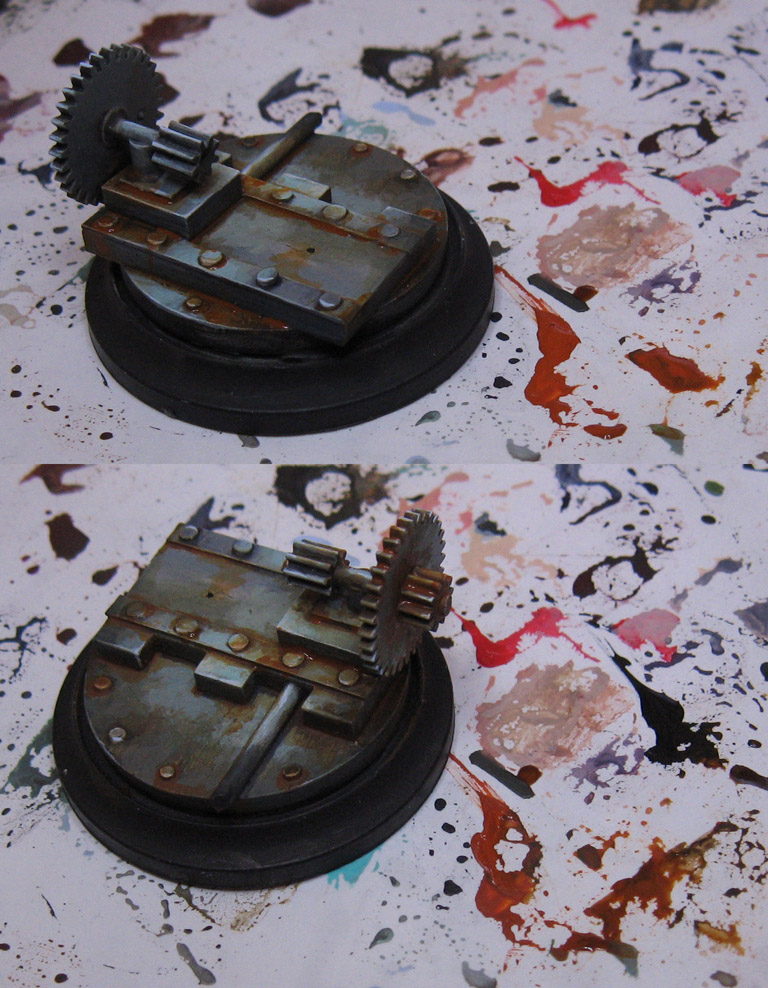 Rust is also added to the gears on the figure... 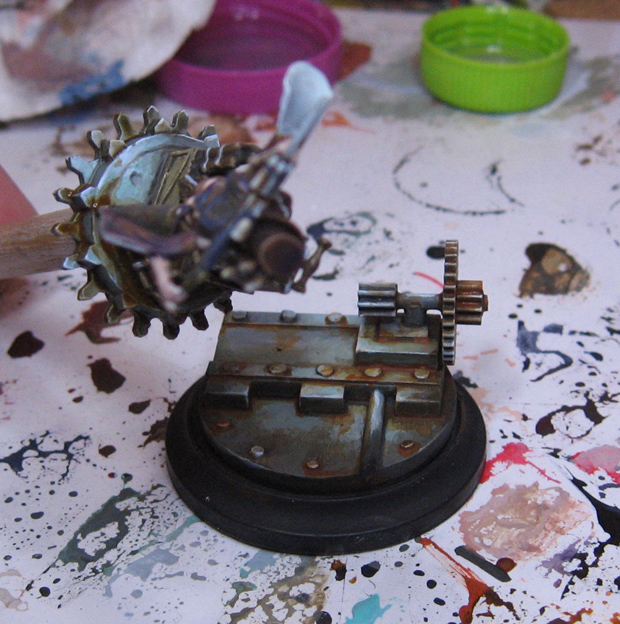 Getting there!  I continued to work on the figure, defining details on the face, working out what sort of colors I wanted on the crates, and more.  The crates needed to have a little variety in their color tones as well. 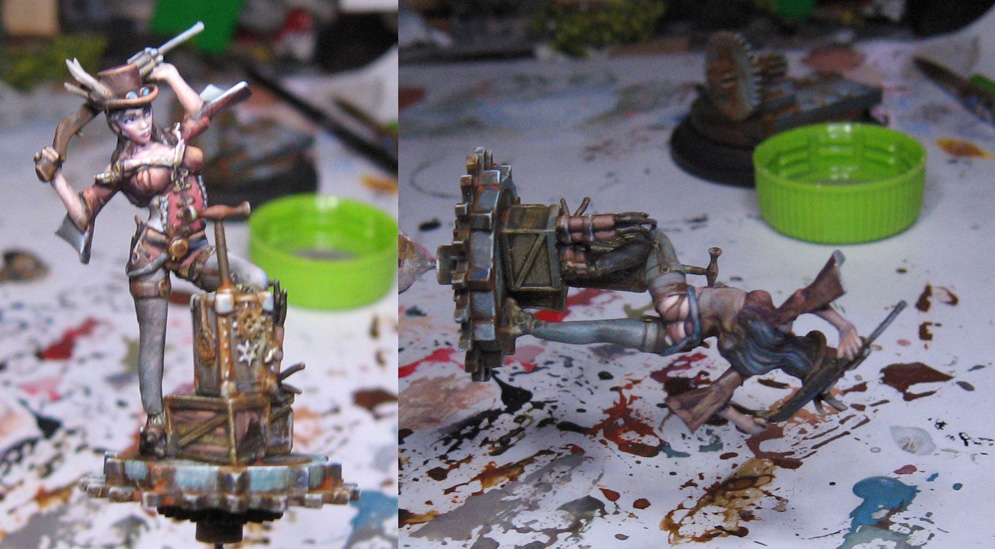 In nearly every layer that I have been painting on this figure, I have been mixing in some of the wash colors with my regular paints. 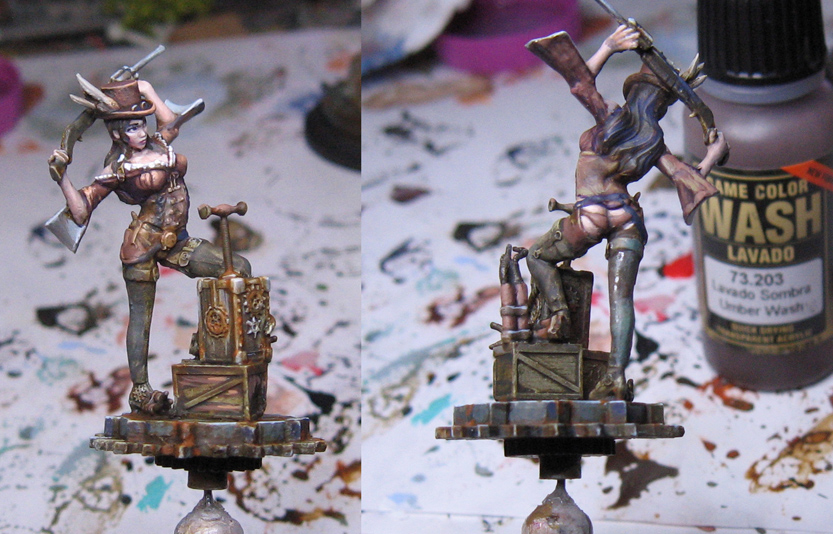 Since I was working "globally", I could always see when something was getting too light, or not light enough, right away.  That's the big advantage of not working on only one tiny part to the exclusion of the rest of the mini. 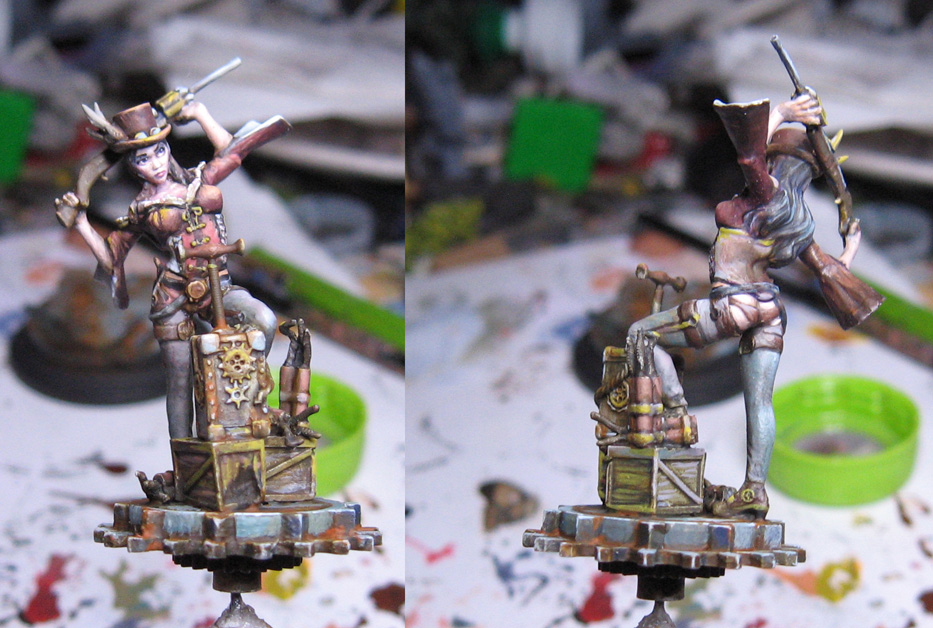 The images got a little burned out here, but in this stage I was going back in with very dark glazes to define some areas better or make the highlights seem brighter. 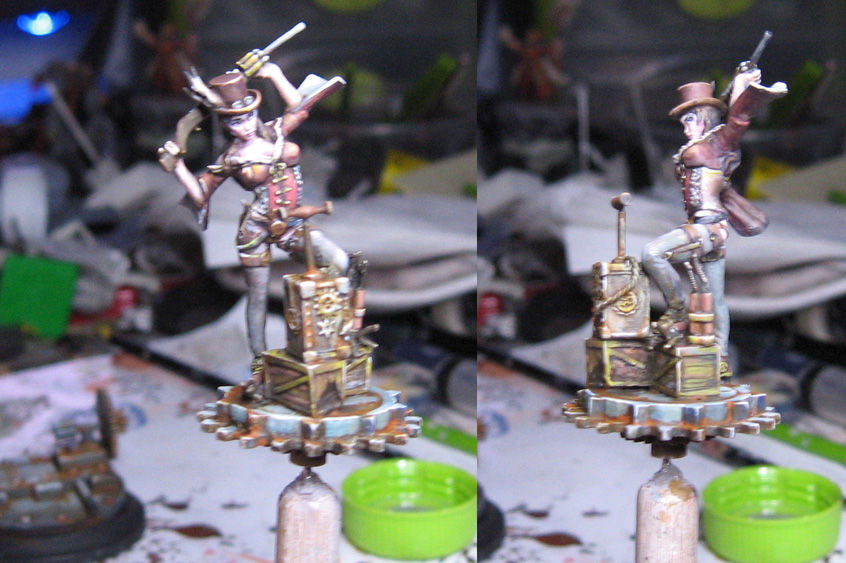 Just about done!  I may still add some weathering powders or do some kind of oil slick/grease effects, but I want to take pictures of how it looks first, so that I can get a comparison of the two! 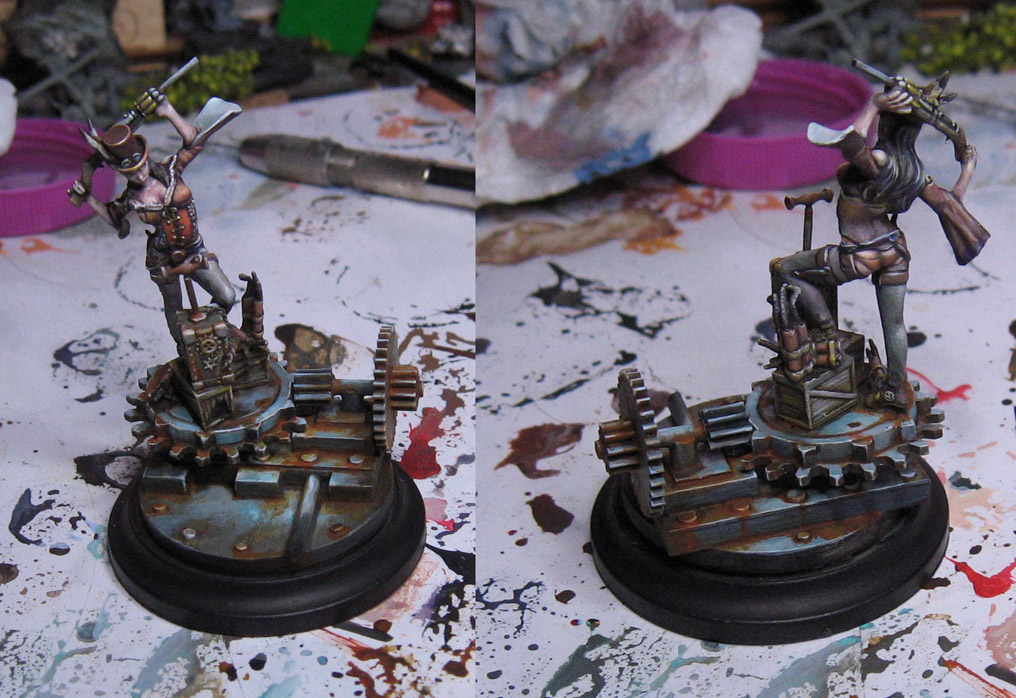