You missed a spot 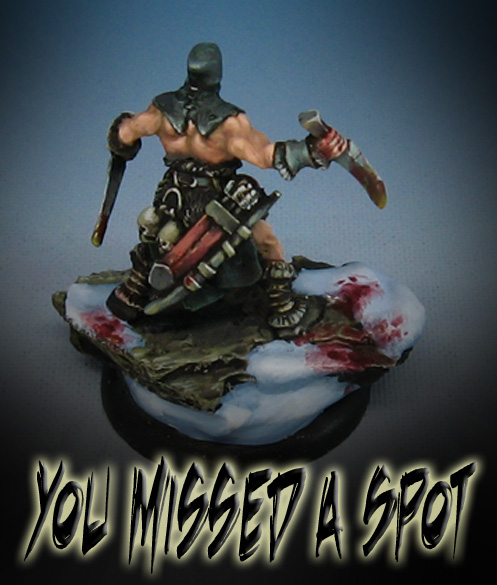 I think this guy was one of my favorite bloody snow figures from the Red Box Games archer set that I painted a while back.  I did four WIP articles on this group, and the final episode covered the blood/poison effects, as well as how I tried to make it appear as if the blood was sinking into the snow.

That was the most fun part of the painting process, figuring out how to do that on a completely solid surface.  Normally, I would have used more of a flock material which would have absorbed the paint naturally.  This was a real challenge, but unavoidable since I had to continue with the same style of basing as the rest of the army.

Here's a link to that part of the step by step:

I also created a video for blood spatter and other effects, called (not surprisingly) Bloody Mess!
https://www.youtube.com/watch?v=KvAu51YMREA

This and much of the rest of the Painting Pyramid series is available from me on USB drives, and also here:

Posted by wappellious at 2:42 PM 2 comments: 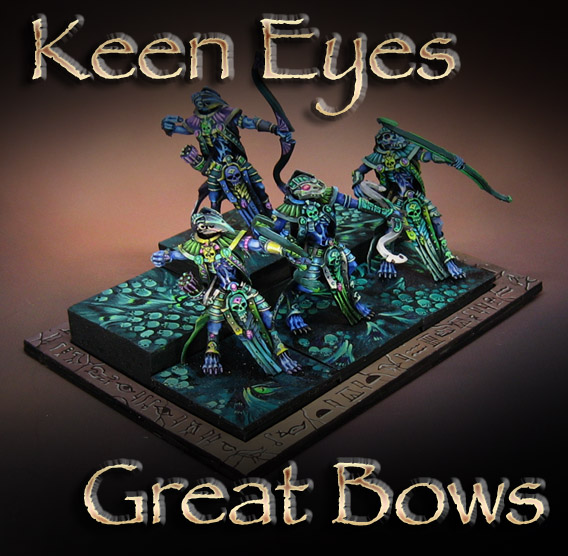 It seems that I forgot to show you the finished Enslaved Guardian Archer unit with its new tray and unit filler. 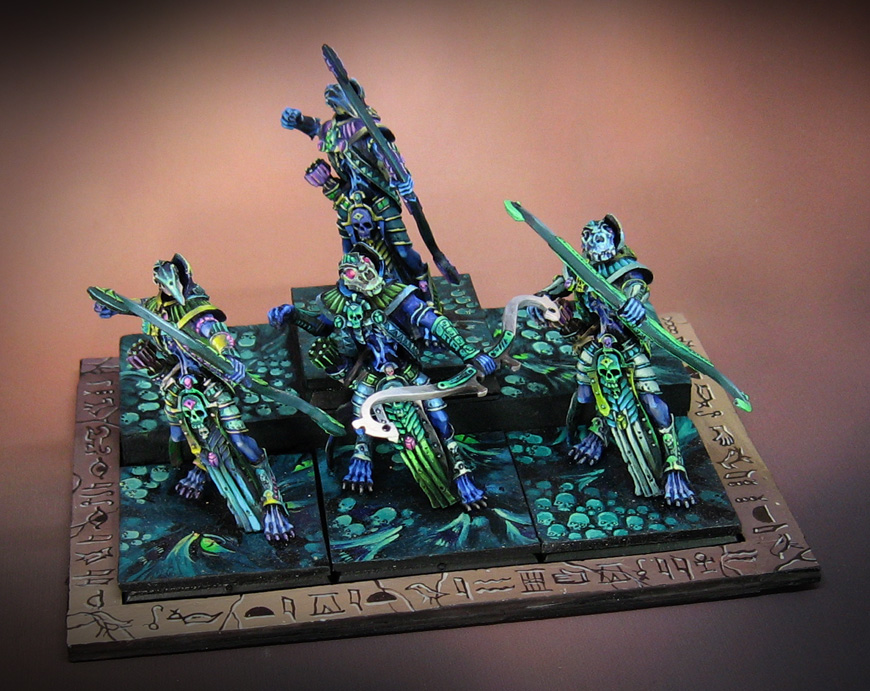 It was all very simple, but it definitely gave it all a nicer look! 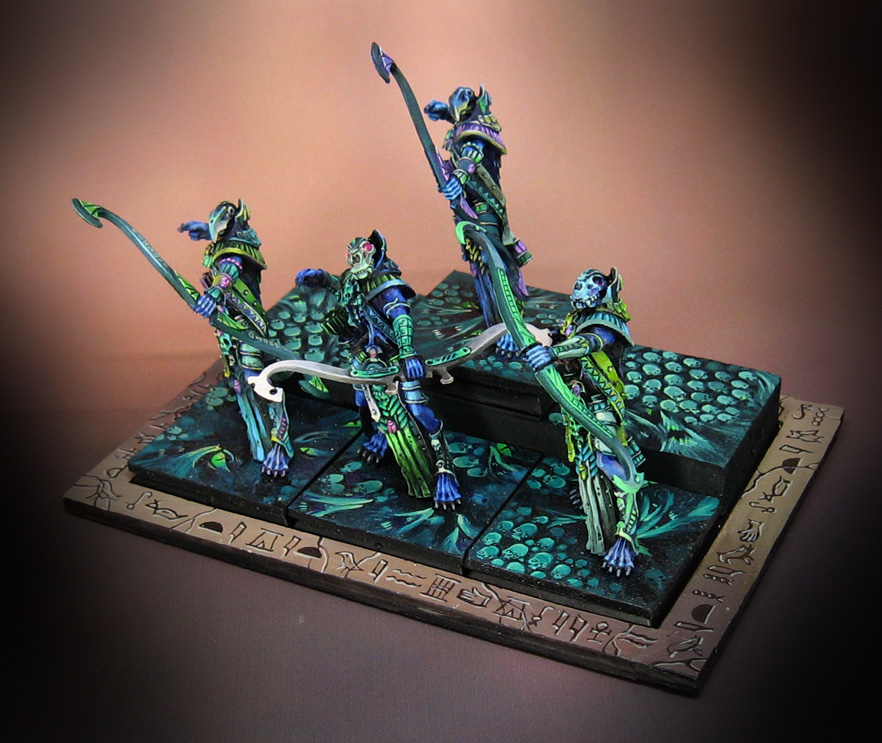 In fact, this "stepped" look makes it seem even more like a temple than one entirely flat surface. 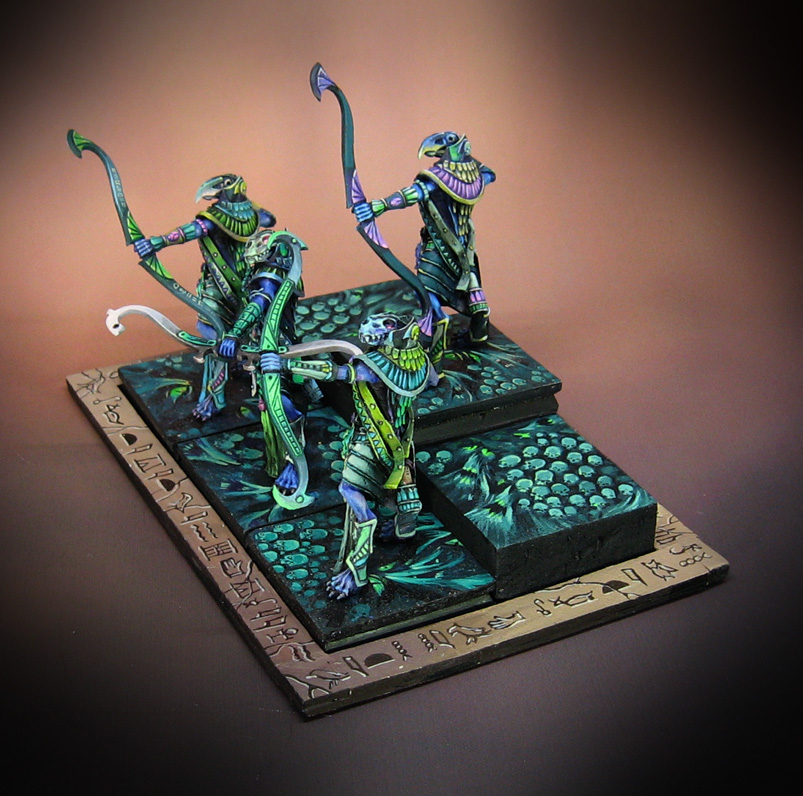 It was very nice to have these open spaces to show the demon marble effect.  I can recall how disappointed I was after I put the big chariot unit's figures on their bases.  The large, complicated figures covered up well over 60% of the excruciatingly elaborate freehand work I had done on all six massive bases! 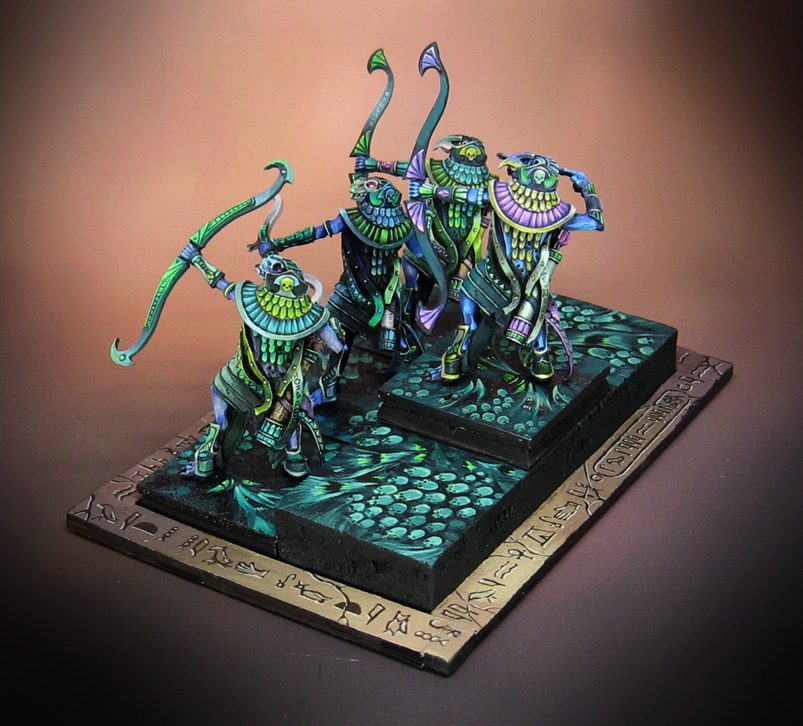 This unit proved itself to be quite valuable in tonight's game.  I may just have to do a second unit! 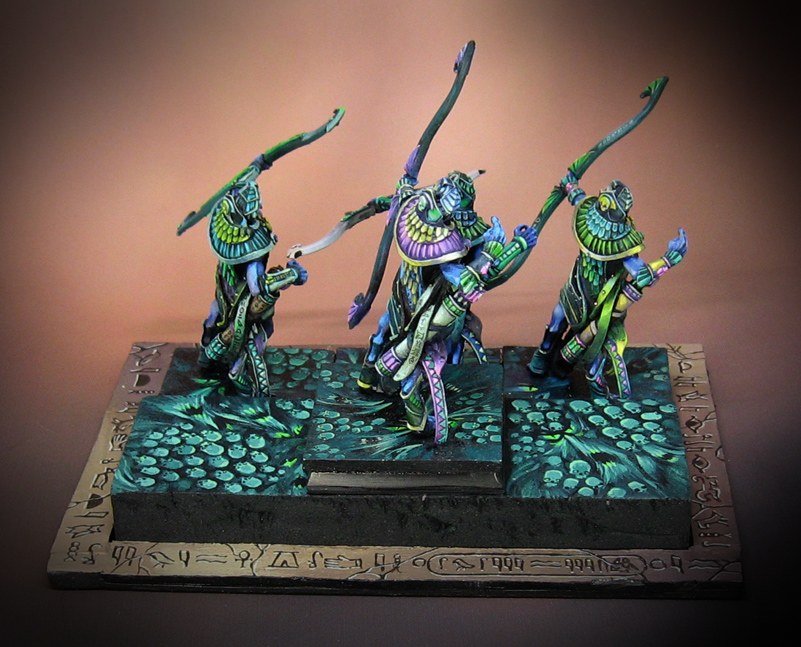 As with nearly everything else in the Mantic Empire of Dust army, things that had little value in another system are at least playable, if not seriously deadly.  That has proven itself in each of the three games, as I try to experiment with various units, and combinations thereof. 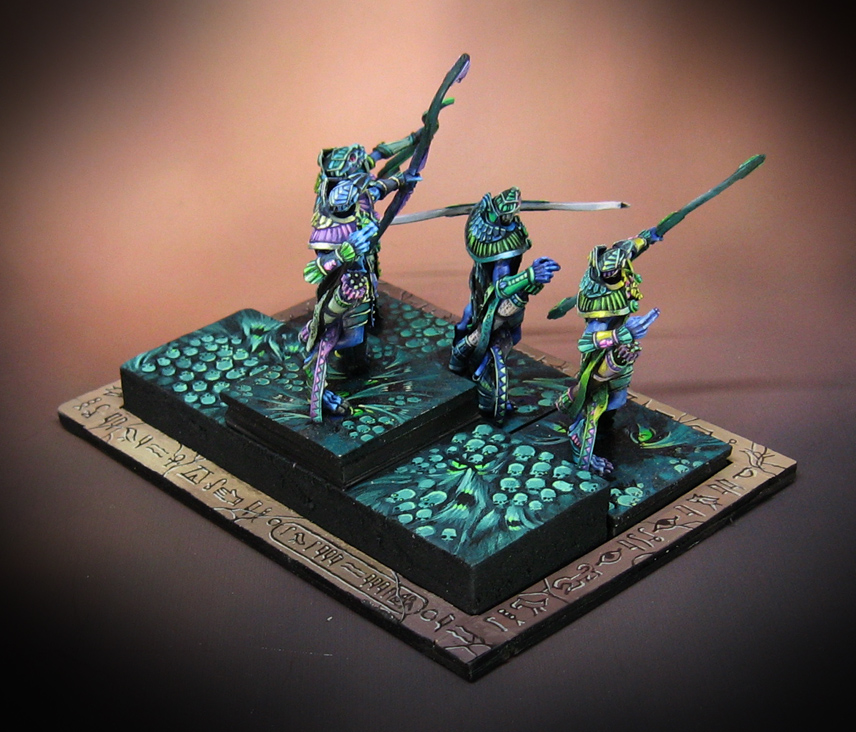 In an army where many things were my favorite, these guys are very sentimental.  It was in painting these that I got the inspiration to sculpt my own massive beasts for the army, and go with this sort of iridescent blue color for the skin. 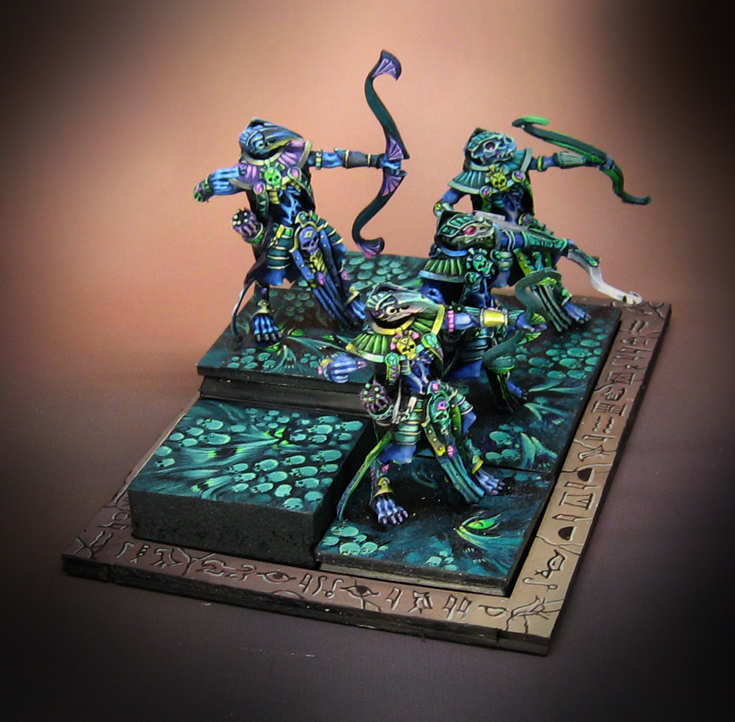 Another view from above to show you the floor pattern and the hieroglyphs. 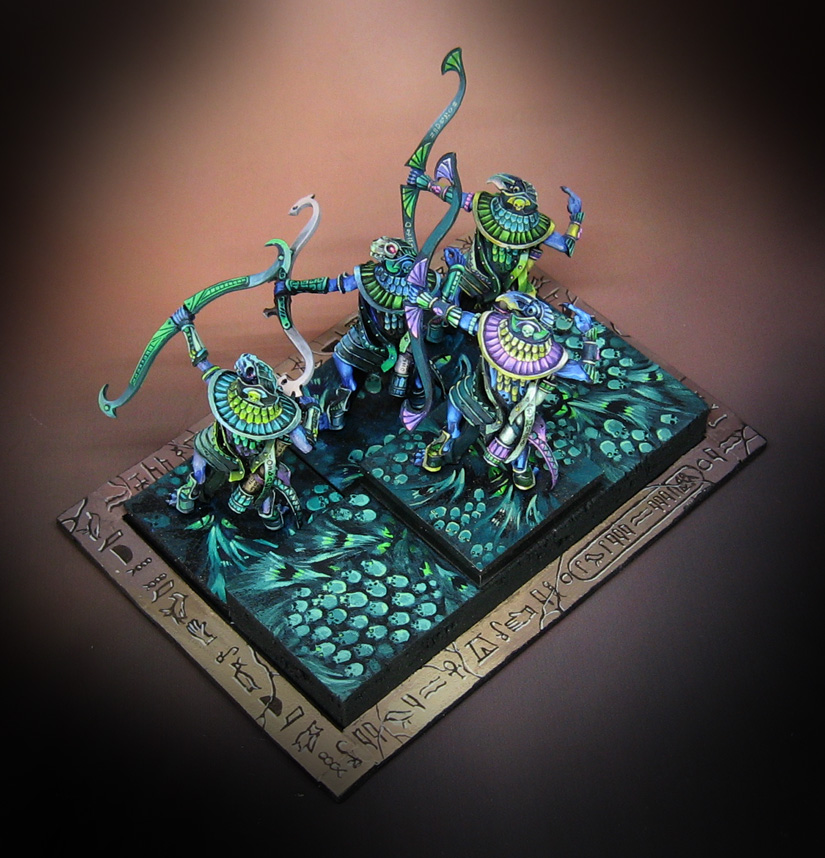 Another battle report is coming soon, and these boys will certainly be featured!!  Stay tuned... 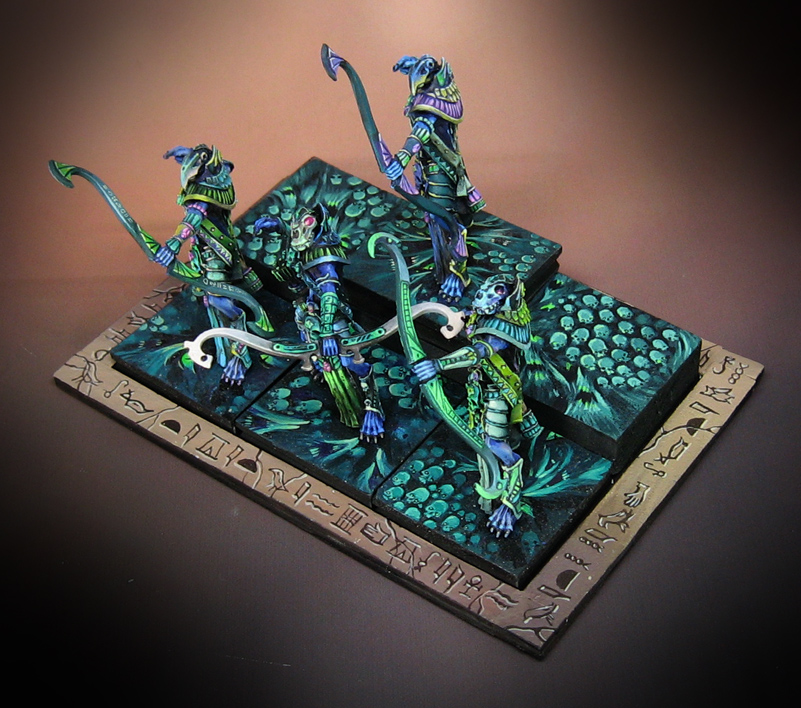 Posted by wappellious at 1:16 AM No comments: