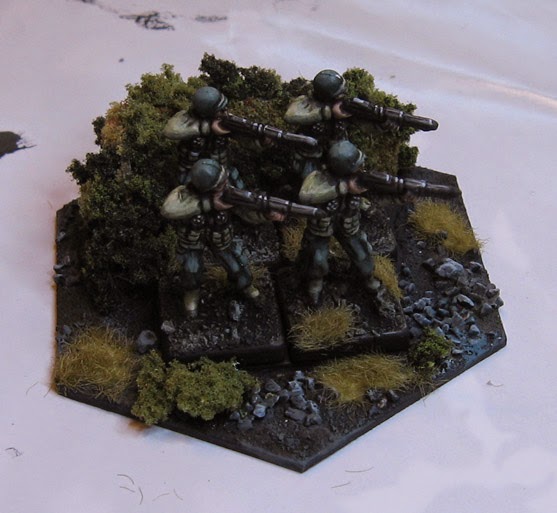 No, this is not about Bulldogs football!

It's about the roughest, toughest terrain in all of Memoir '44... hedgerows!

Those buggers are nasty on so many levels.  To make them was not so easy, either. To leave enough room for the 4 figures that need to fit inside, and leave room for sandbags around the edge of the hex, is not easy at all.

To create a wall to glue some foliage, I cut up some left over matboard.  This would be thin enough, but also strong.  I super glued it, and supported it with some gravel around the edge. 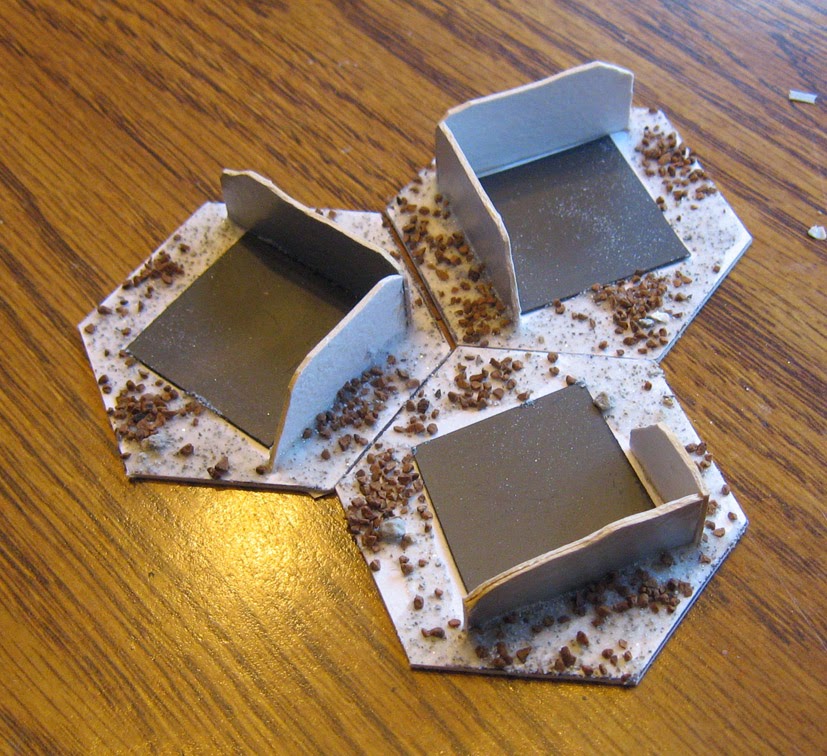 Once all this set up, I had to to paint all the walls and gravel. 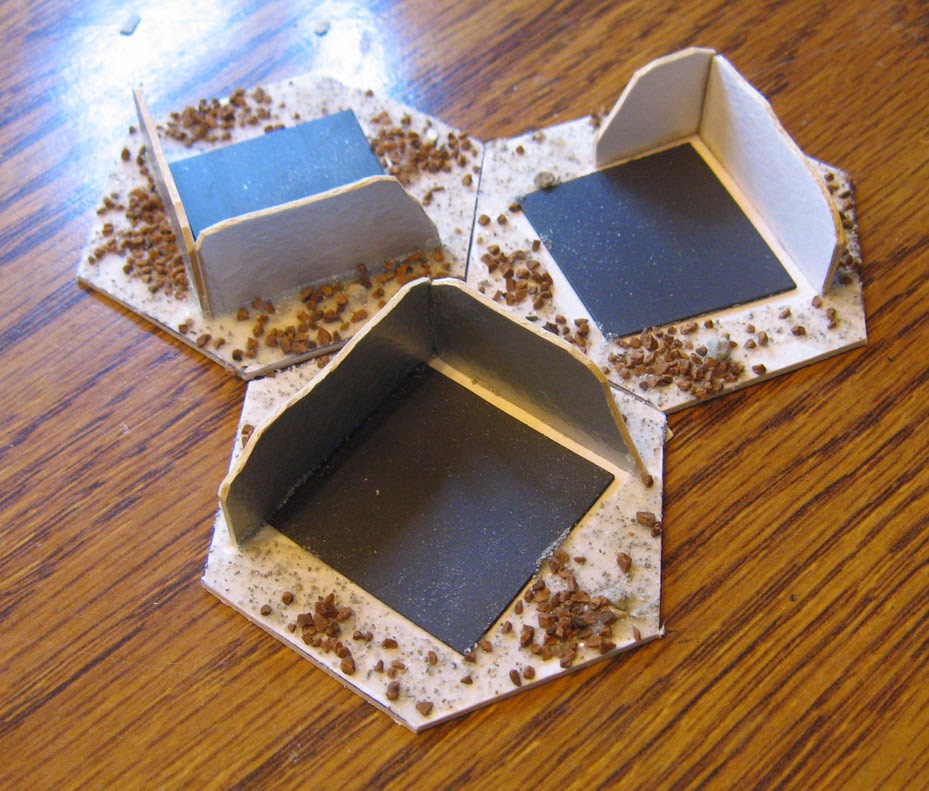 First layers applied.  I assumed that I was going to have to paint the walls a variety of green shades, since the foliage would never cover 100%. 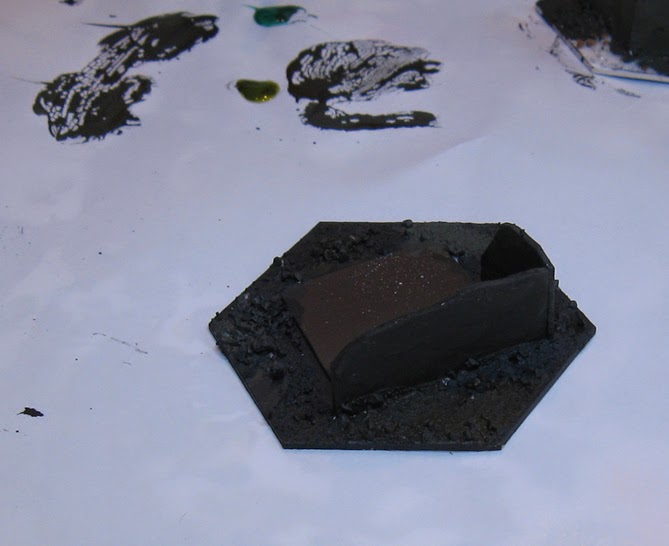 I thought it would make things easier if I glued some flock first.  My only concern was the possibility that the subsequent layers of glue would not stick as well to the flock. 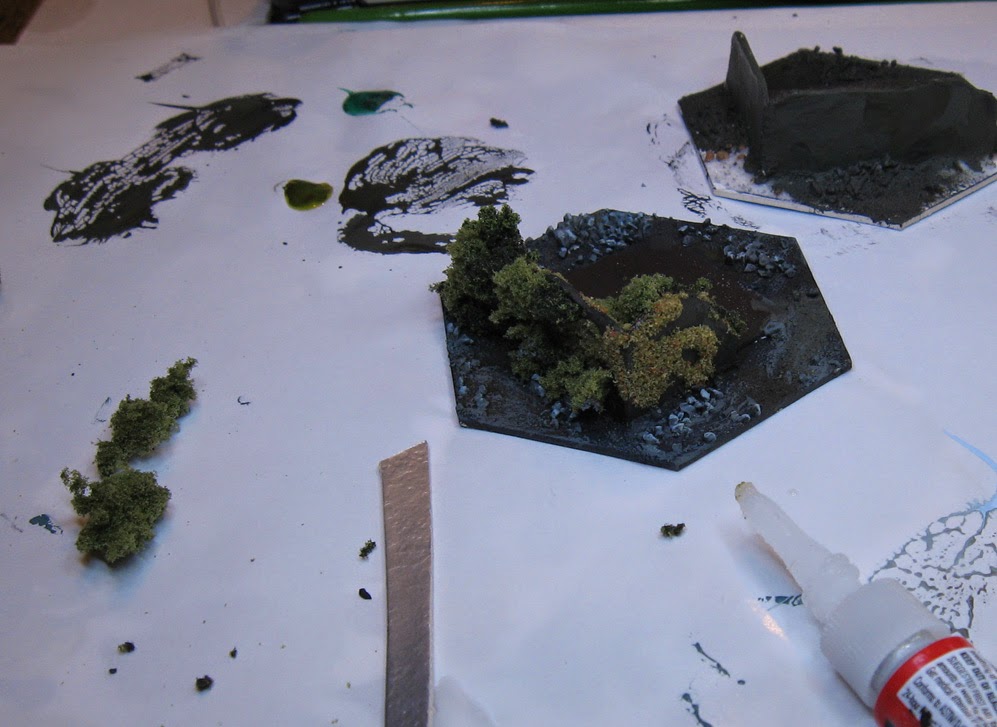 Those fears proved to be unfounded.  The two types of clumping foliage worked very well!  However, I had to break it down into some very tiny clumps.  As usual, I super glued a lot  of it to my fingers! 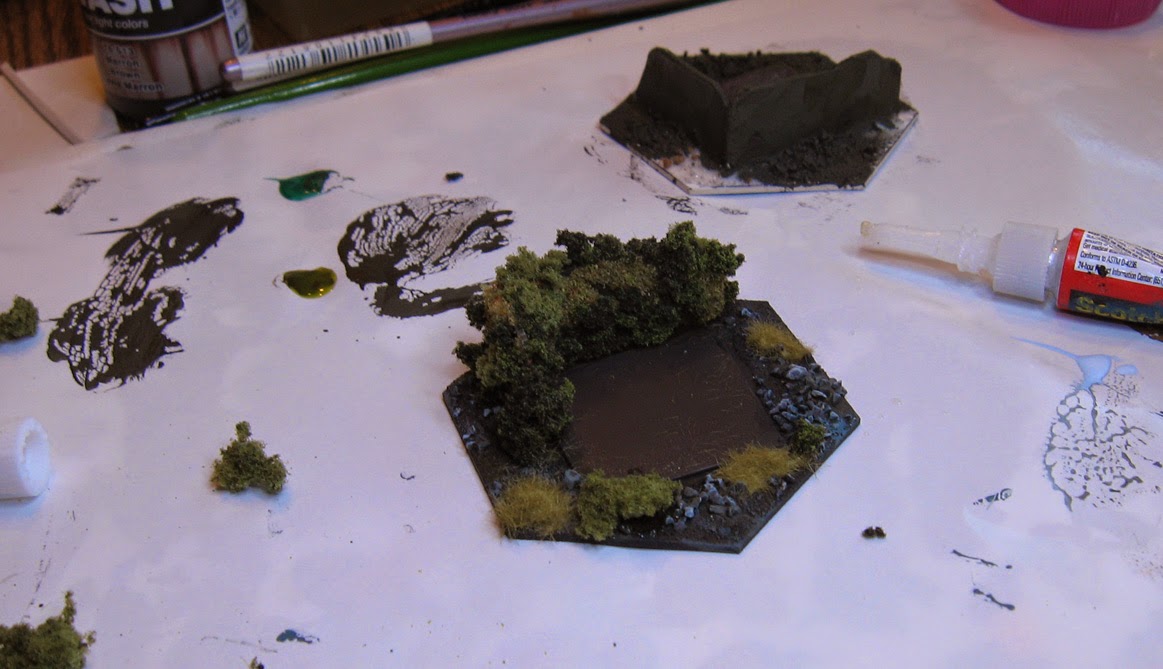 That reminded me of the days when I used to do dioramas all the time that involved the foliage.

I finished off the rest of the base with more foliage, including on the soldiers.  I was liking the results a lot! 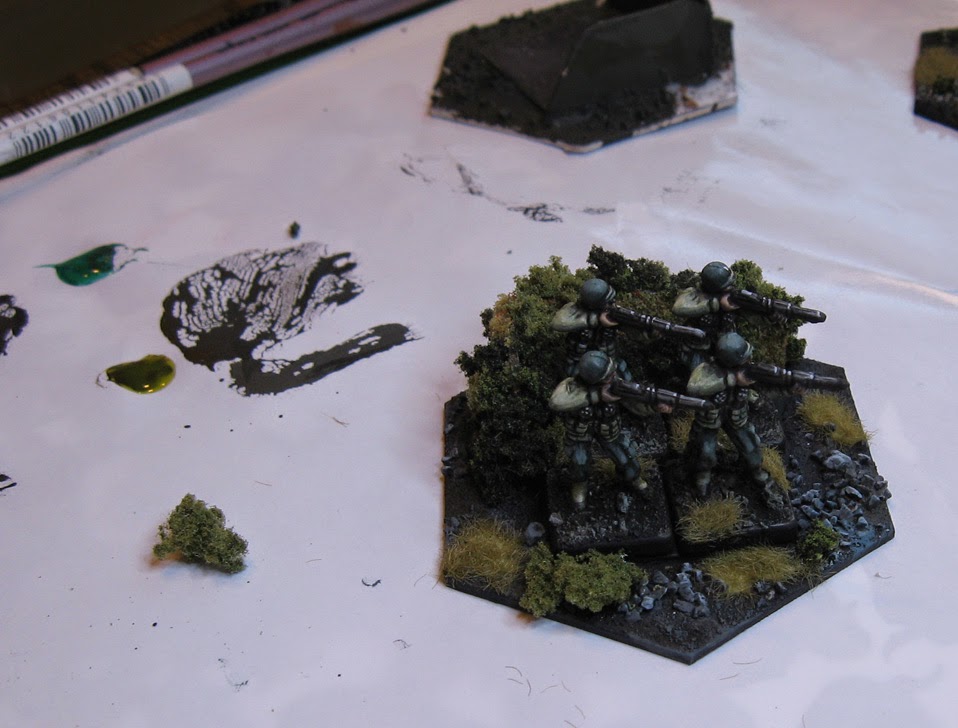 Now those guys are in some serious cover!  -2 dice for tanks shooting at them for sure :-) 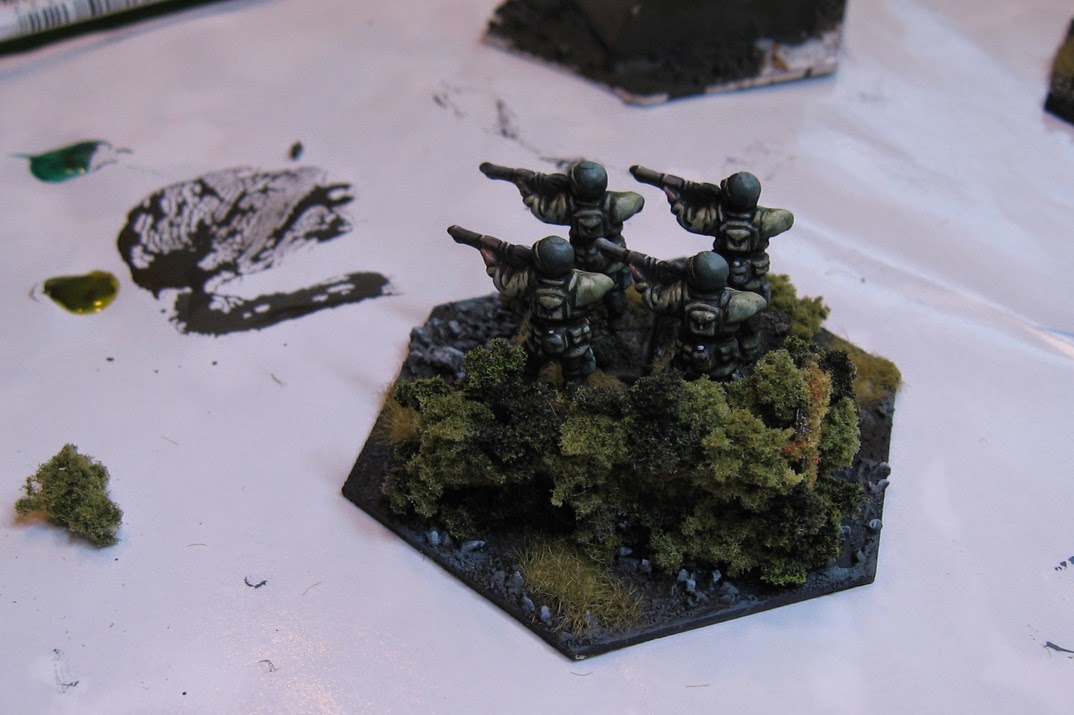 Much more terrain needed to be made, including some more city tiles. 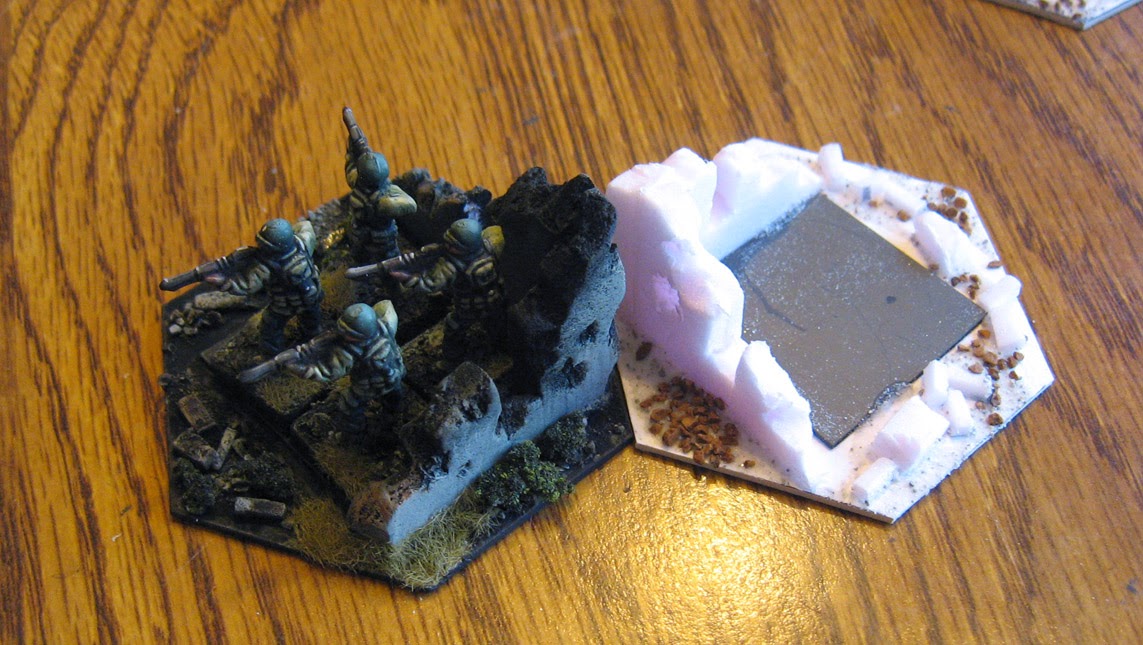 It takes at least 4-5 of each terrain type to get through a typical Western Front scenario. 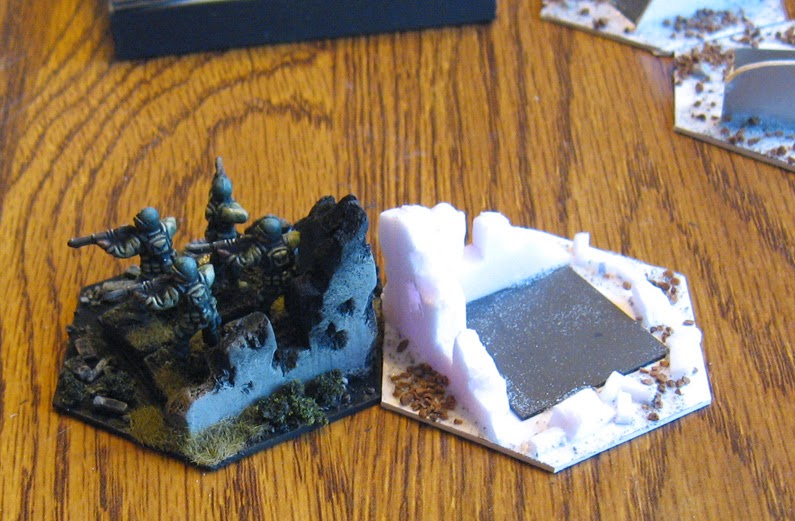 So, that means lots more to do!  Stay tuned. 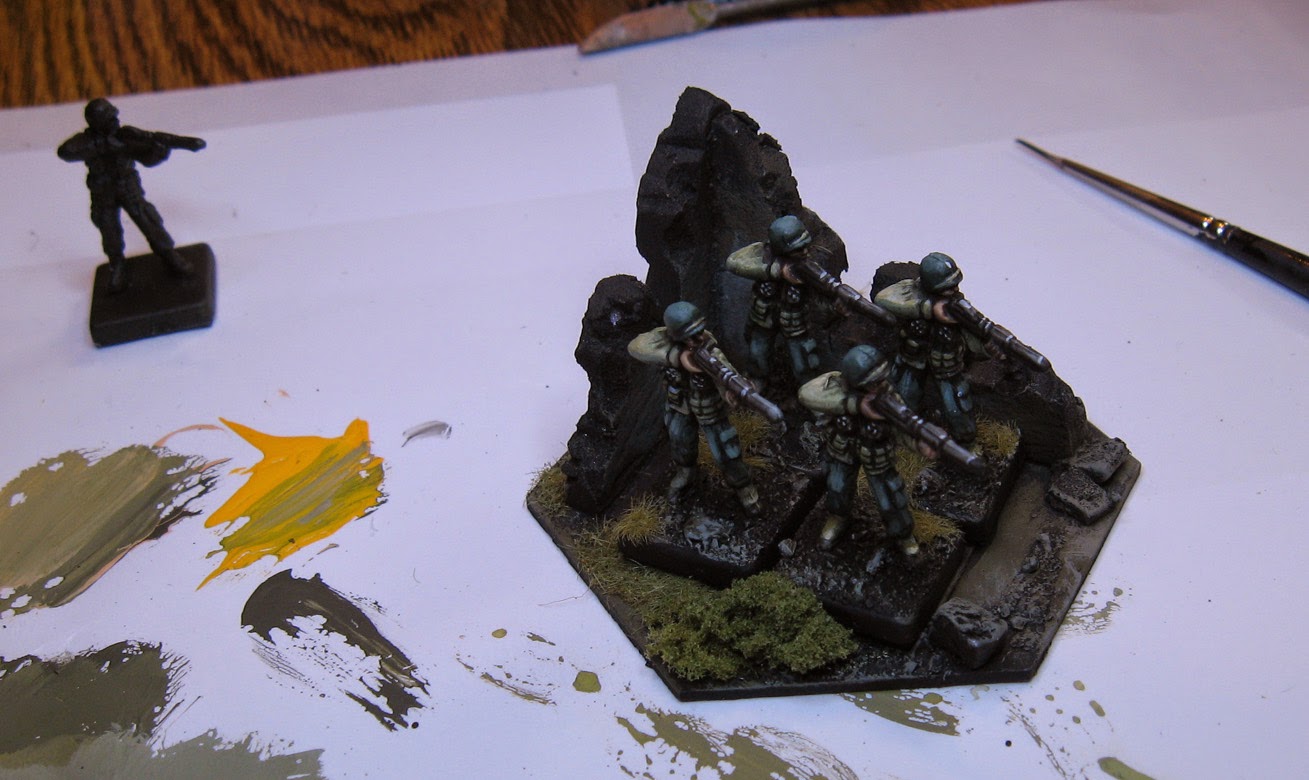 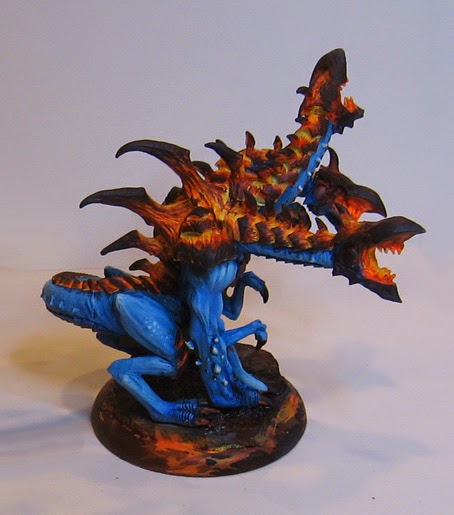 There was much work to be done on the Legion of Everblight warbeasts.

The cooling lava effect was entering its closing stages. 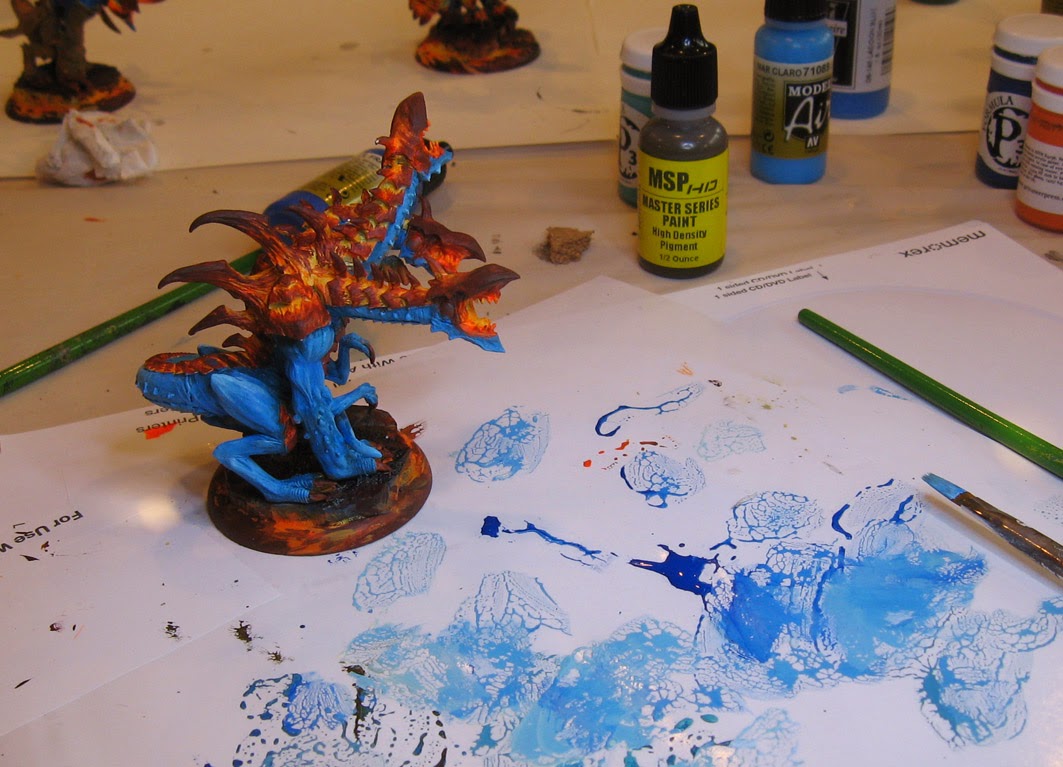 However, before the final dark colors were added to the lava, I wanted to establish the blue colors of the skin.

The idea was fire and ice, so now comes the 'ice' part.

These blues would be very intense, high chroma.  They would also be relatively light. 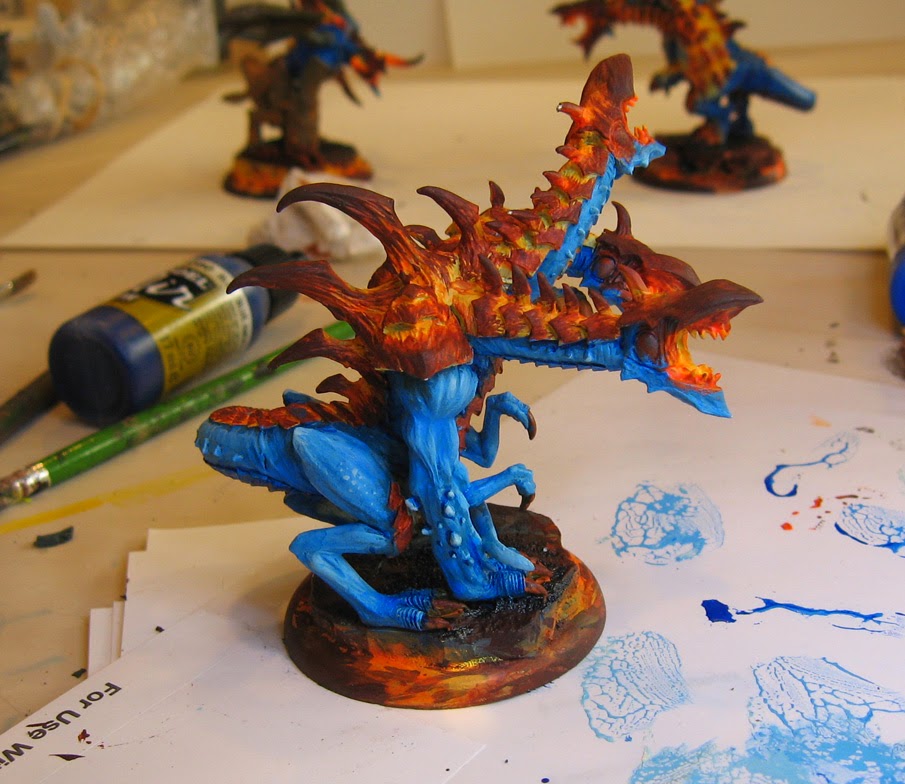 It was not exactly easy to work around the lava bits, but I still used my trusty filbert brush to create some increasingly light colors on the upper muscles. 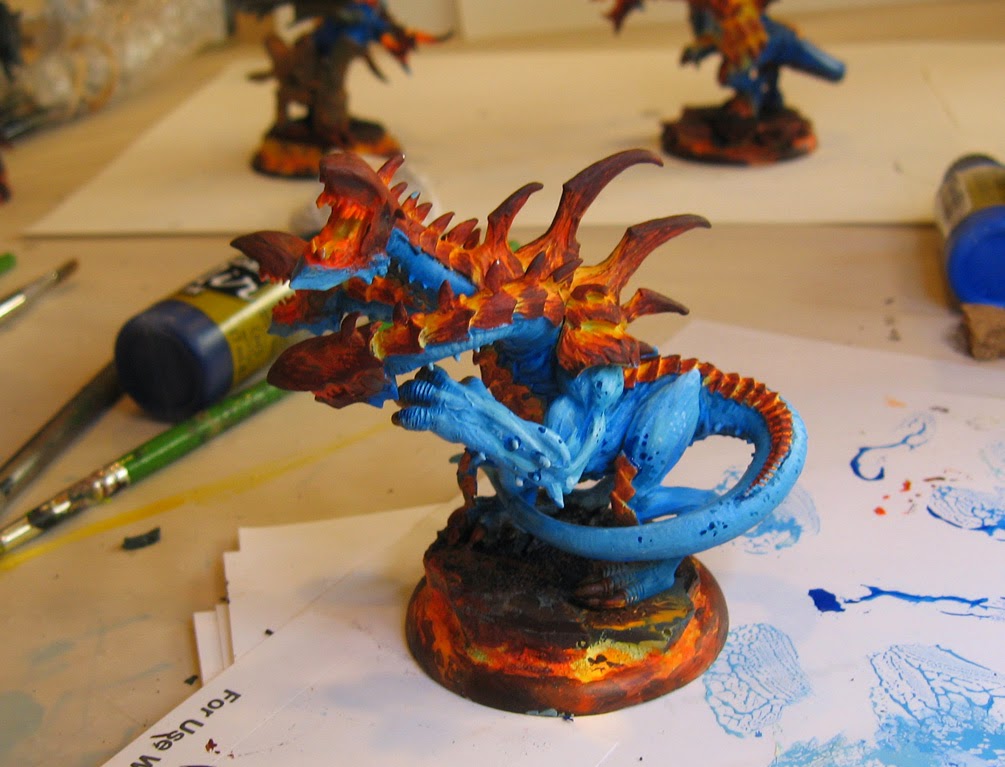 We were working very very rapidly here.  The idea was to establish a general sense of the colors, not worrying about very detailed stuff. 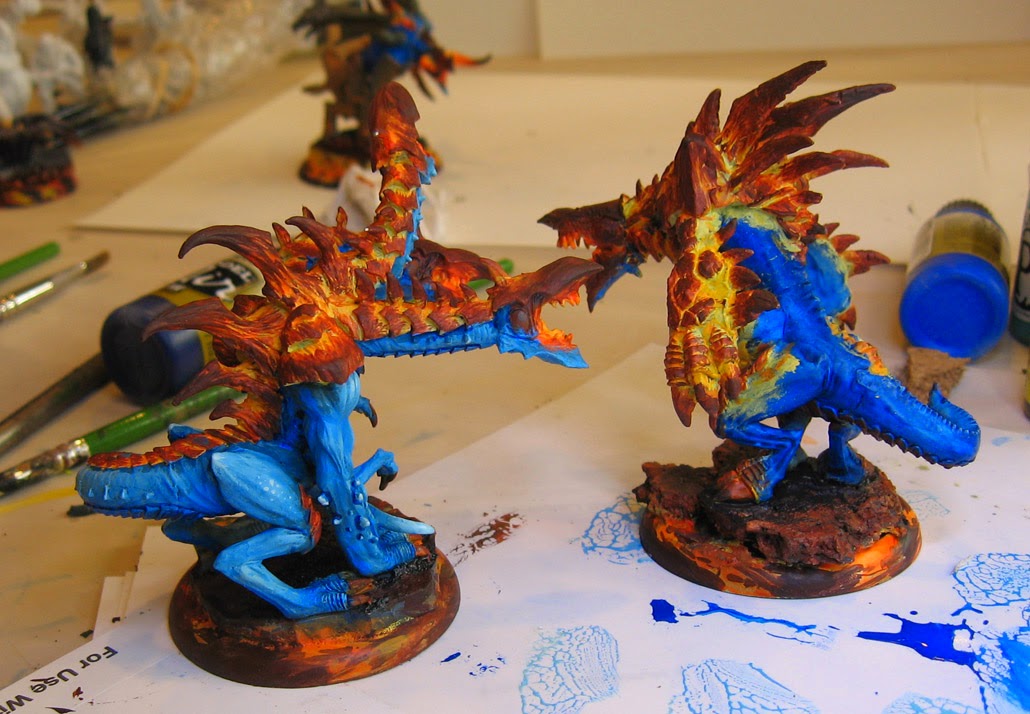 Once we felt that the blues were mostly where we wanted, I went back to the lava... adding even more blue and black to the mix.  I also decided that the bottom jaw also needed to be dark, so that the lighting effect in the mouths would look better. 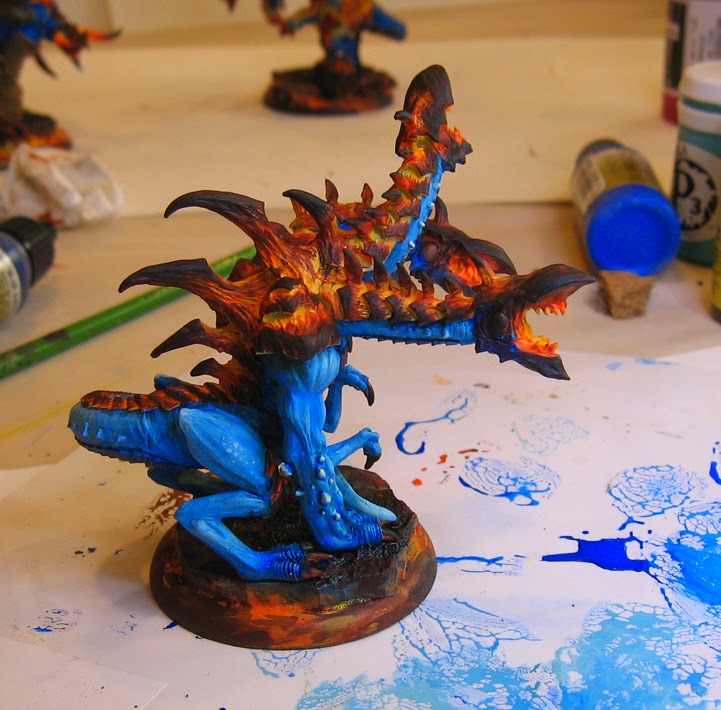 Constant adjustments indeed!  Now it was time for the other warbeast... and getting around those lava effects would be a real beast! 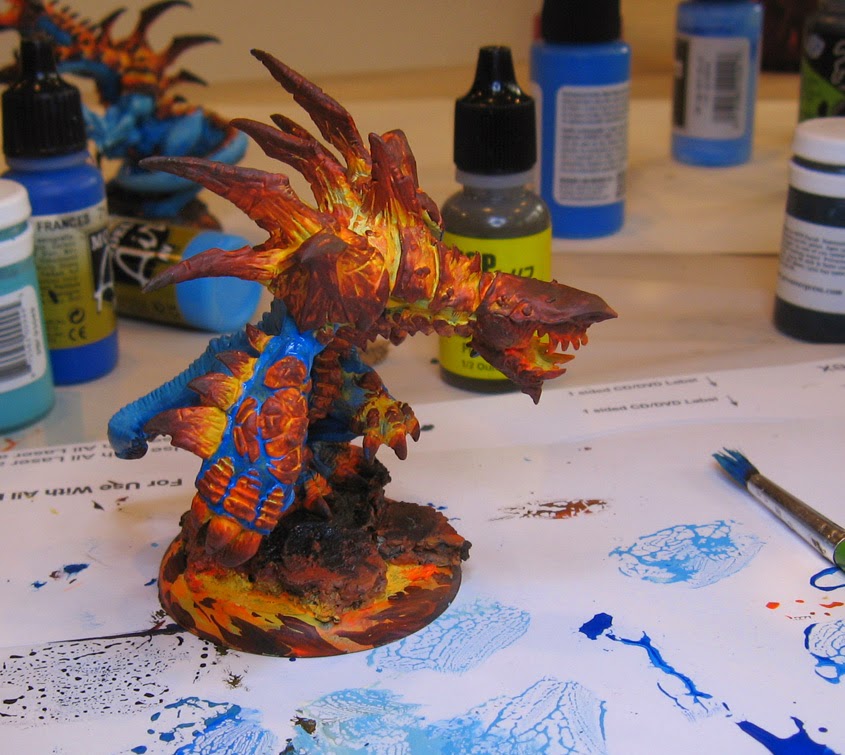 Once I had gotten around all the the lava effects, it was time to try and lighten up certain points. 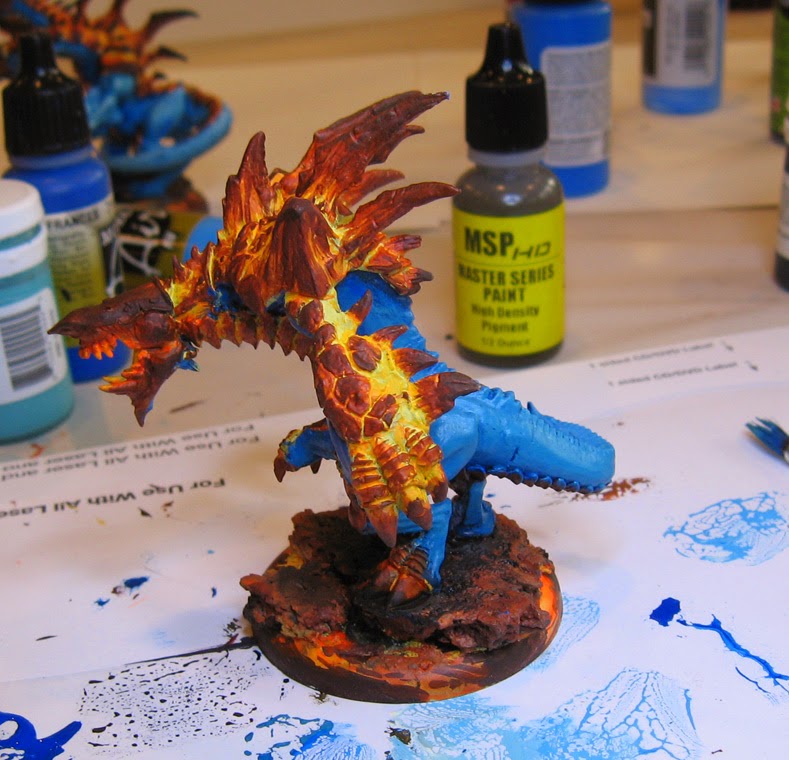 Again, a big challenge.  But it was nice to see things begin to come together! 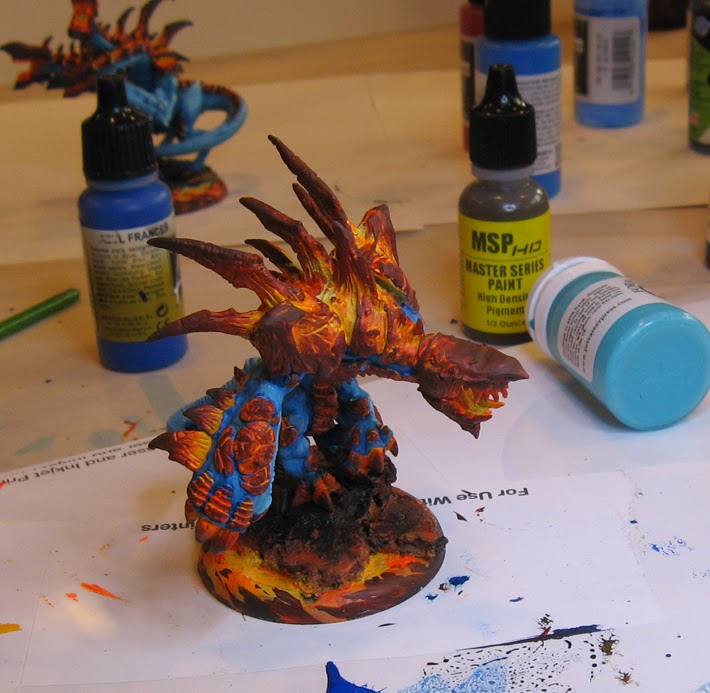 One of the main reasons I held off on the darkest lava color here was the knowledge that I was going to accidentally hit the carapace over and over, especially on the tips. 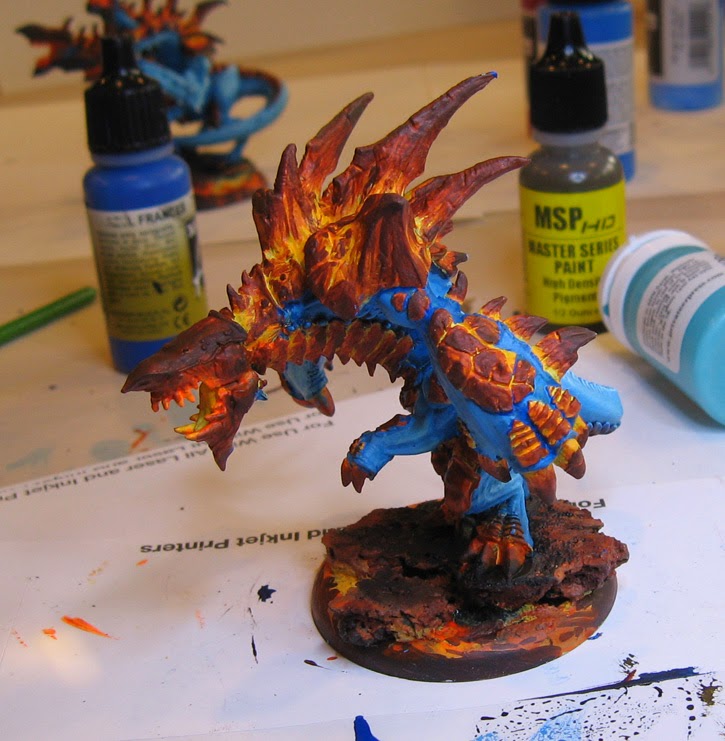 Now the darks are added, and the hot looks that much hotter! 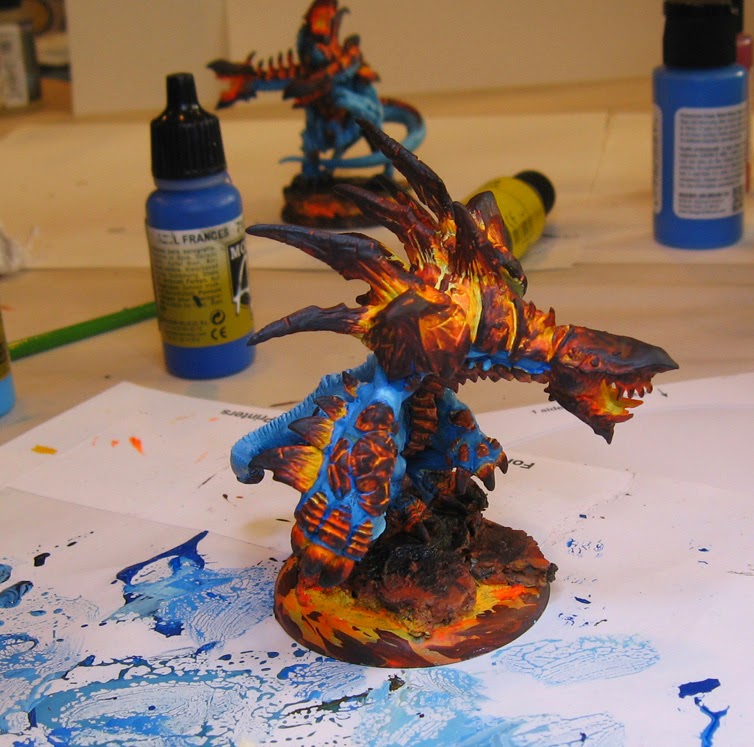 There will still be 2-4 more steps on the lava effects, but it is coming along! 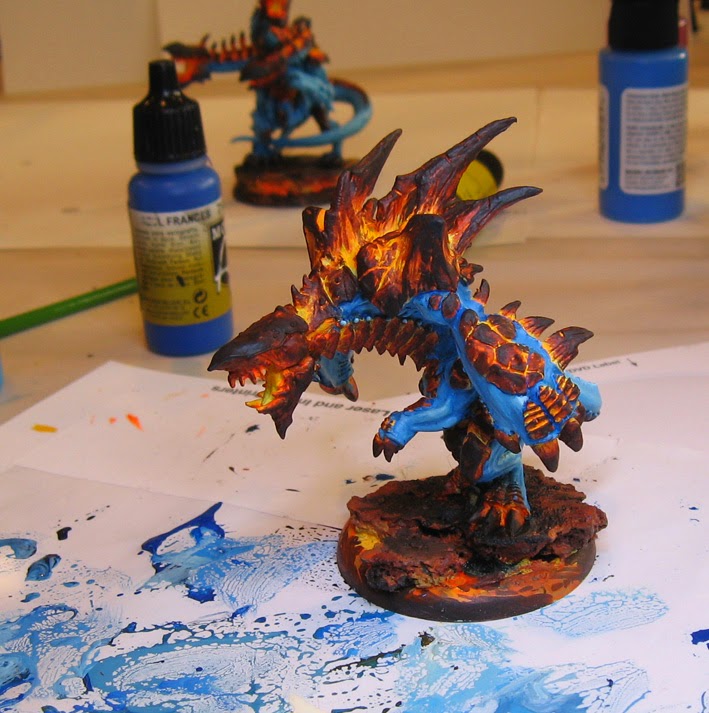 Side by side, the two big dudes!! 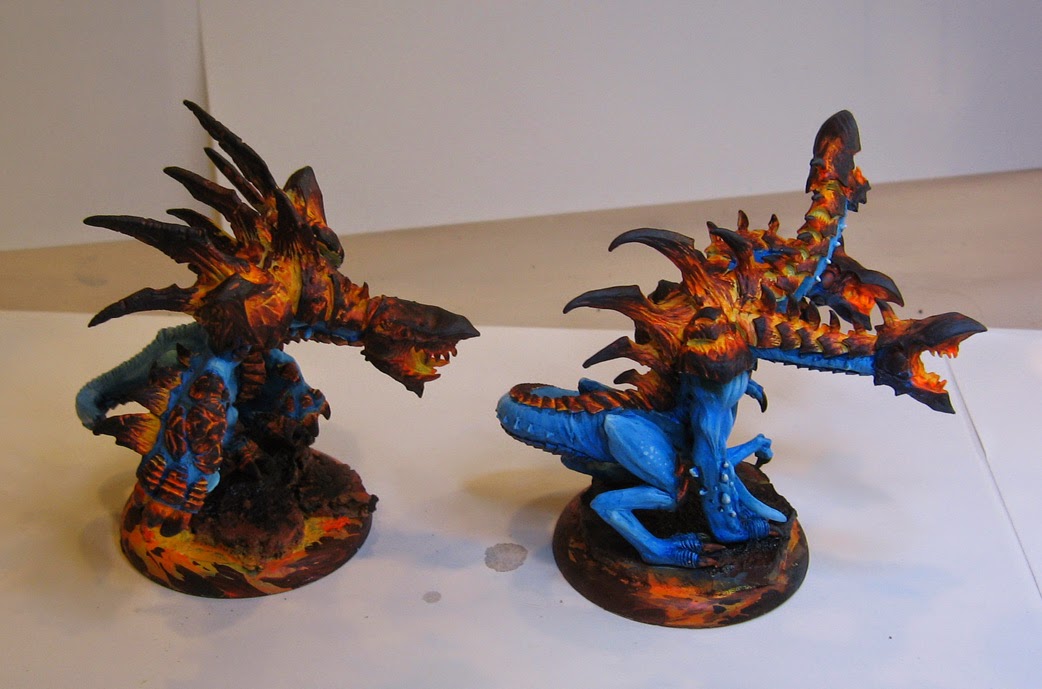 Now the new theme and colors of the entire army have been set.  Sometimes, that is the biggest challenge of any army. 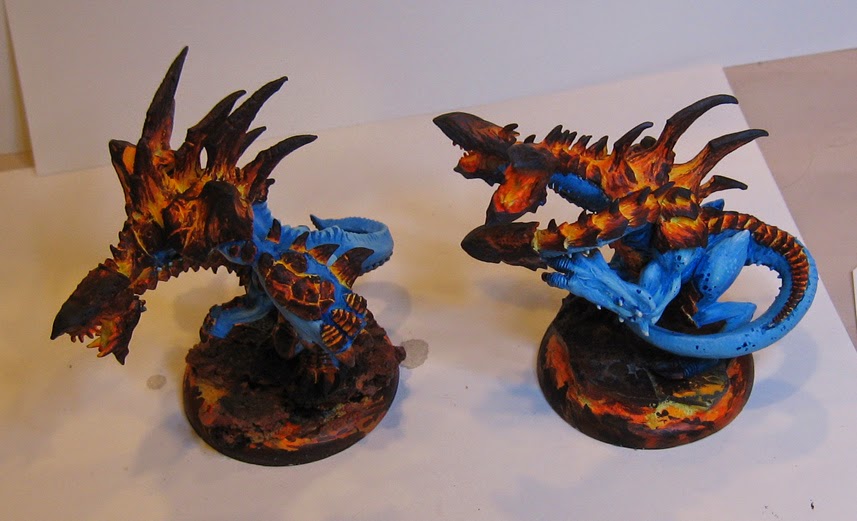 The next time I get over to Joe's house, we will start working on these guys again... stay tuned! 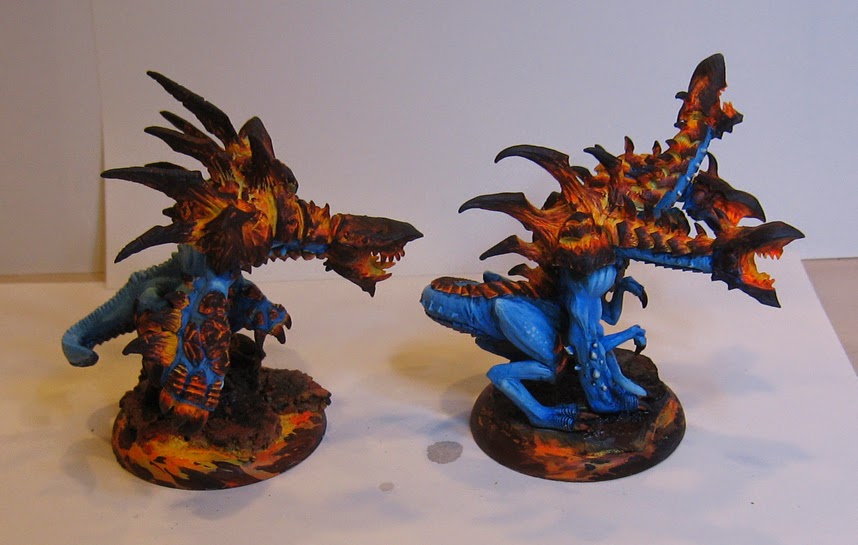 Posted by wappellious at 5:25 AM 2 comments: