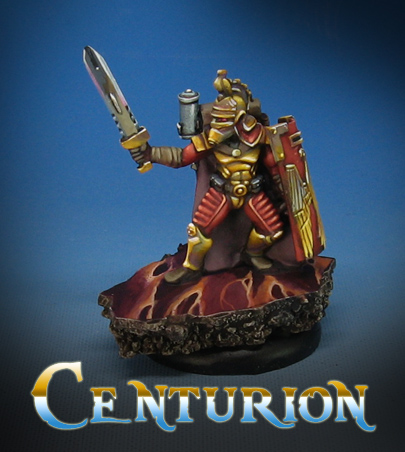 These Junkers figures from Urban Mammoth were used for the "Raging Reds" video from the Painting Pyramid series.  This focused on the entire range of reds... warmer, cooler, saturated and muted.

It was one of 5 "color theory" videos, which included greens, blues, yellow, and even gray!

The idea was to show how many different reds could be achieved, so that you didn't need to have 200 bottles of red paints!  Over the years I had many questions about reds, as many people tended to get chalky pinks when they attempted to lighten it.  I wanted to show them how to get a great variety of lighter reds.

The bases were fun too... since I had not painted red marble since my old Demonhunters army!

This also turned out to be a nice exercise in gold NMM, playing off the reds that were on the figure.  I tried to add my usual purples and greens for variation and contrast.  In this case, the greenish gray colors would give the golds a little extra bounce, since that would contrast against those deep reds.

Posted by wappellious at 11:19 AM No comments: